I’ll get to glaciers and icebergs a little later, but for now, we’re off to study just ice. Not quite ‘icebergs’ but kinda mini-icebergs, micro-icebergs and nano-icebergs, which we’d already gotten a peek of in the port of Nuuk.

Early on there wasn’t much ice so we upped the tempo:

Out here on the choppy waters the scene is a harsh, severe one, but in no way is it depressing. It’s vigorously invigorating and anciently antiquated. Our guides told us how some of the rock formations here are three billion (!) years old! Others – 3.9 billion years; that is, they were around during the Late Heavy Bombardment and the Archean! That is, though there was no oxygen on Earth, these crags were already here austerely existing much as they still do today. Incredible.

And here’s our first mini-berg!

Gotta love ice. Pure white, or translucent-blue, or sometimes dirty – meaning that particular block of ice was once down at the bottom of an iceberg touching the muck on the seabed. 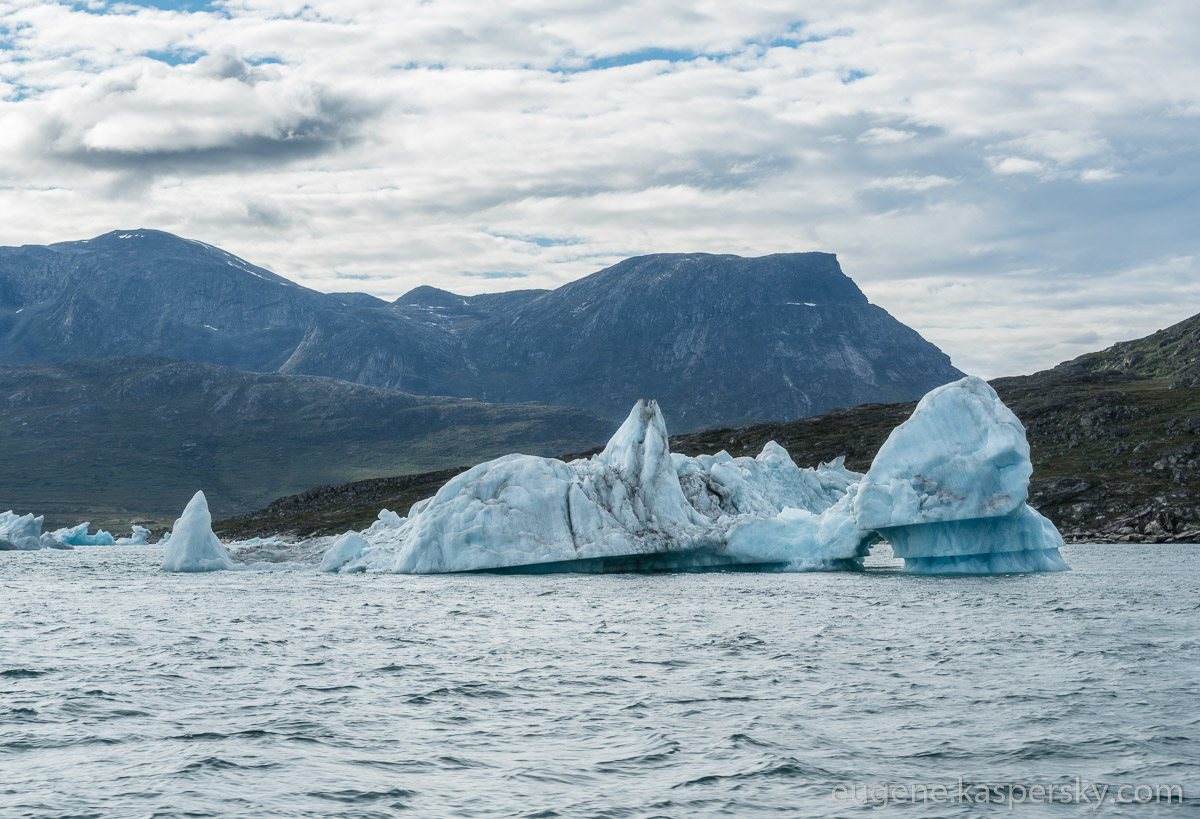 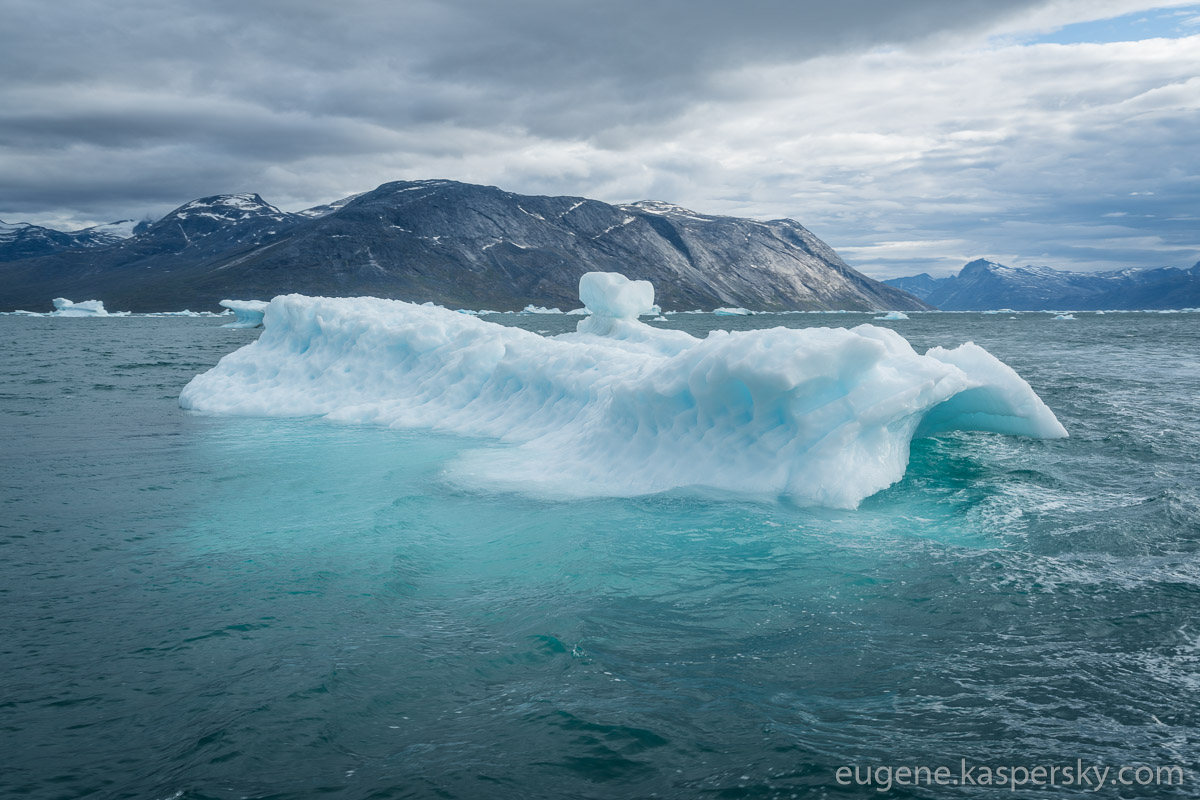 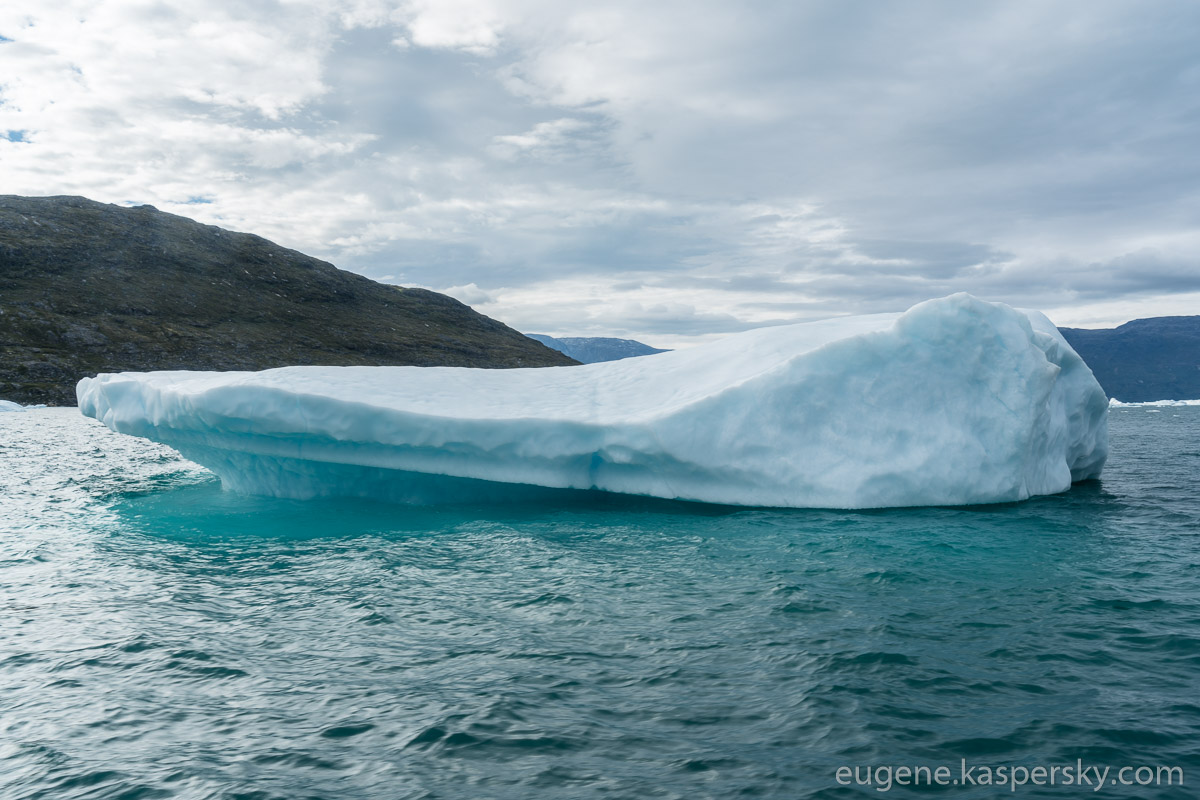 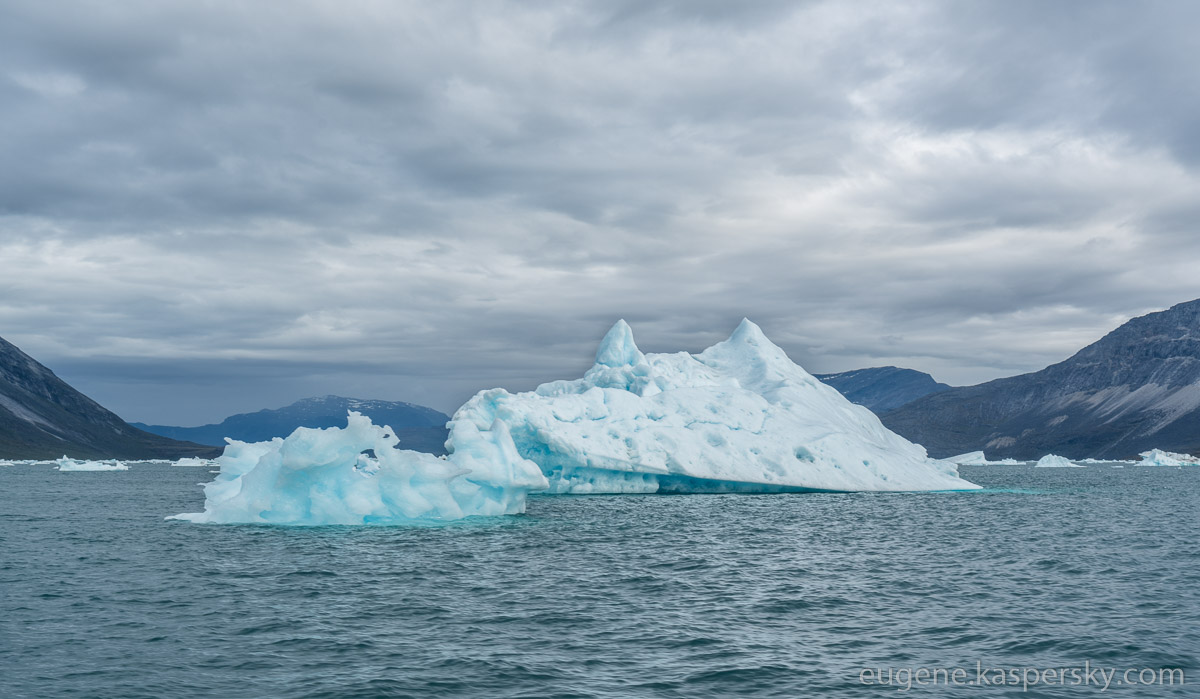 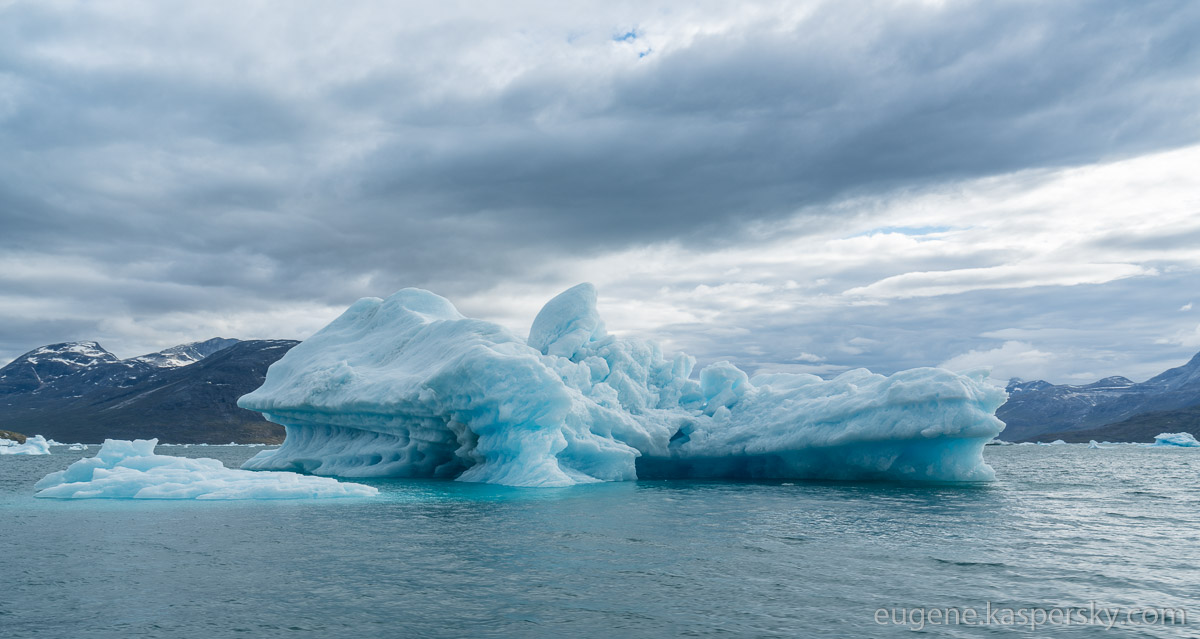 Even the filthy ones look charming: 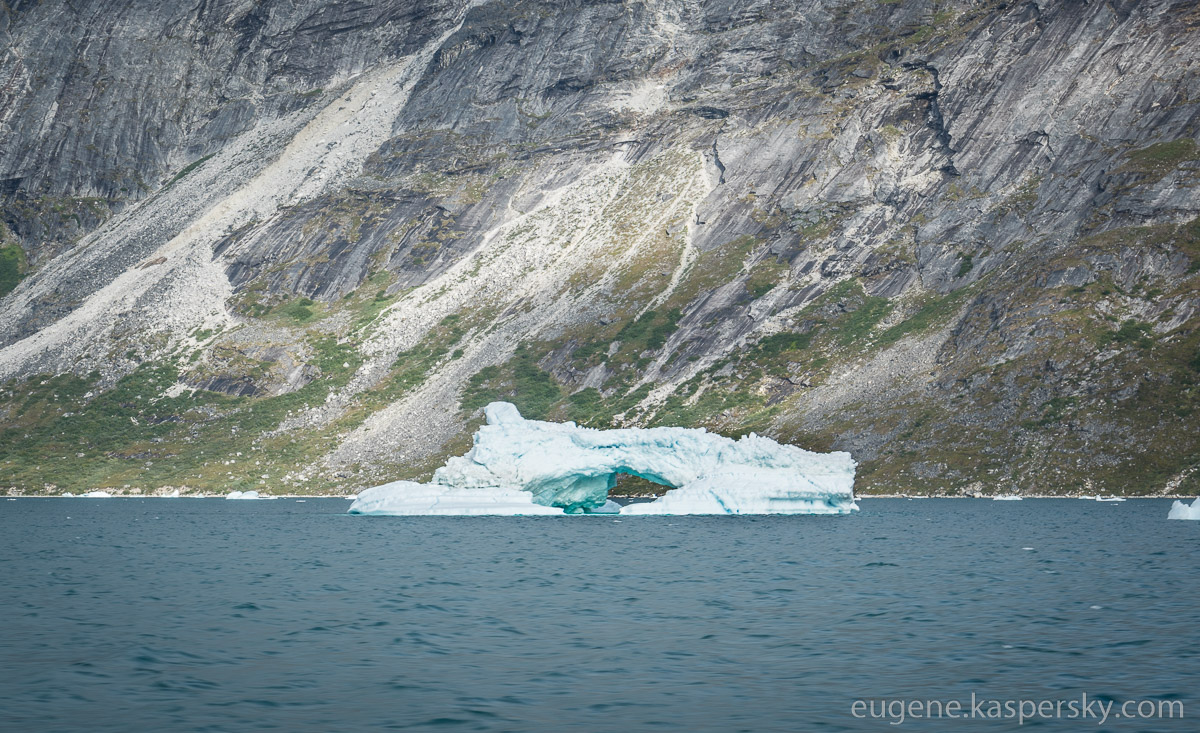 You could stare for hours at these mini-bergs. Just a shame you can’t get up close to all of them… 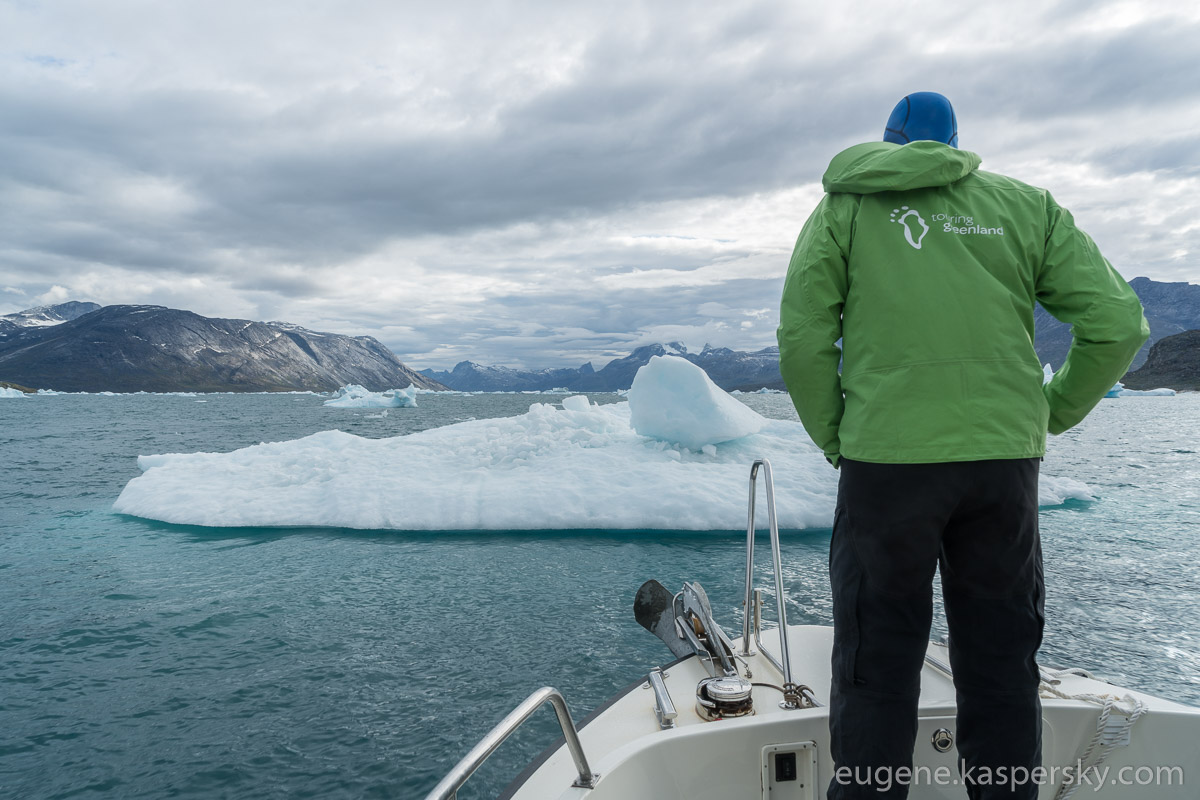 Ok. Guess where I took this pic from? 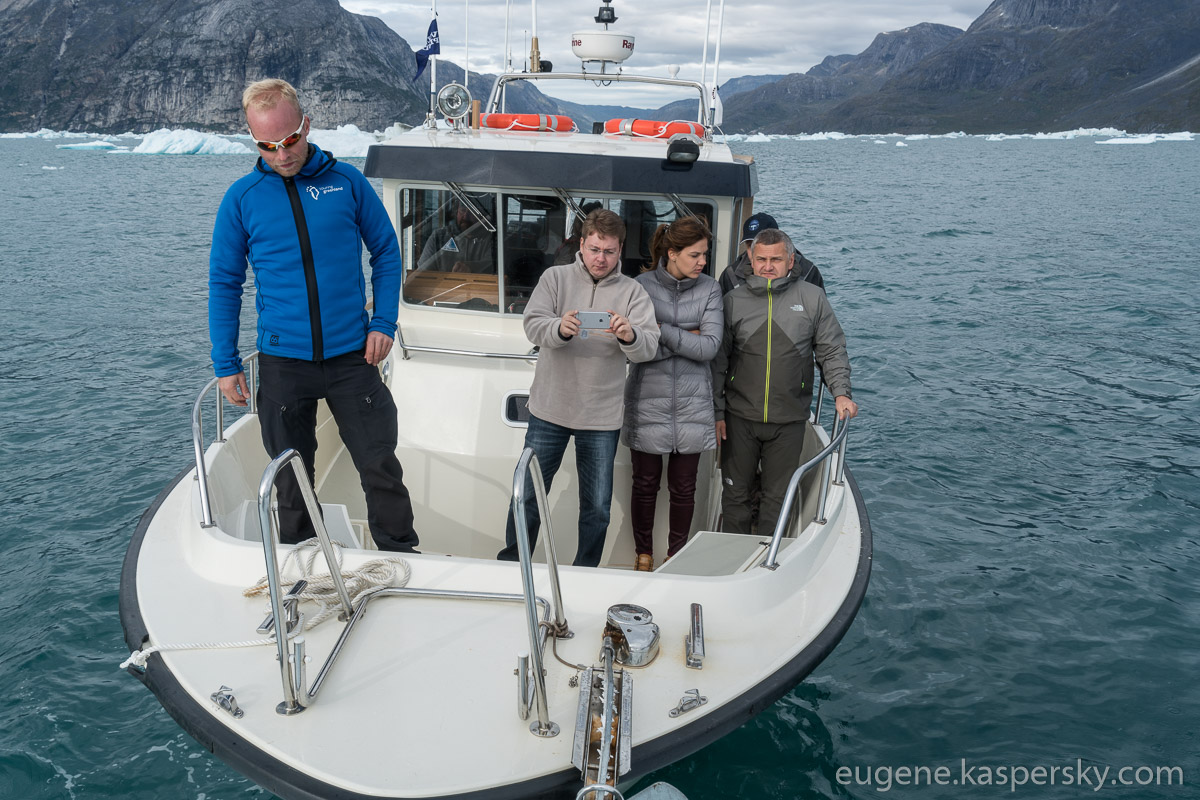 Check out the safety instructions… they went something like this: “If an ice-float starts to spin while you’re on it, it means that it’s starting to crack open, giving off a crunching sound. If you hear such a sound jump into the water!” 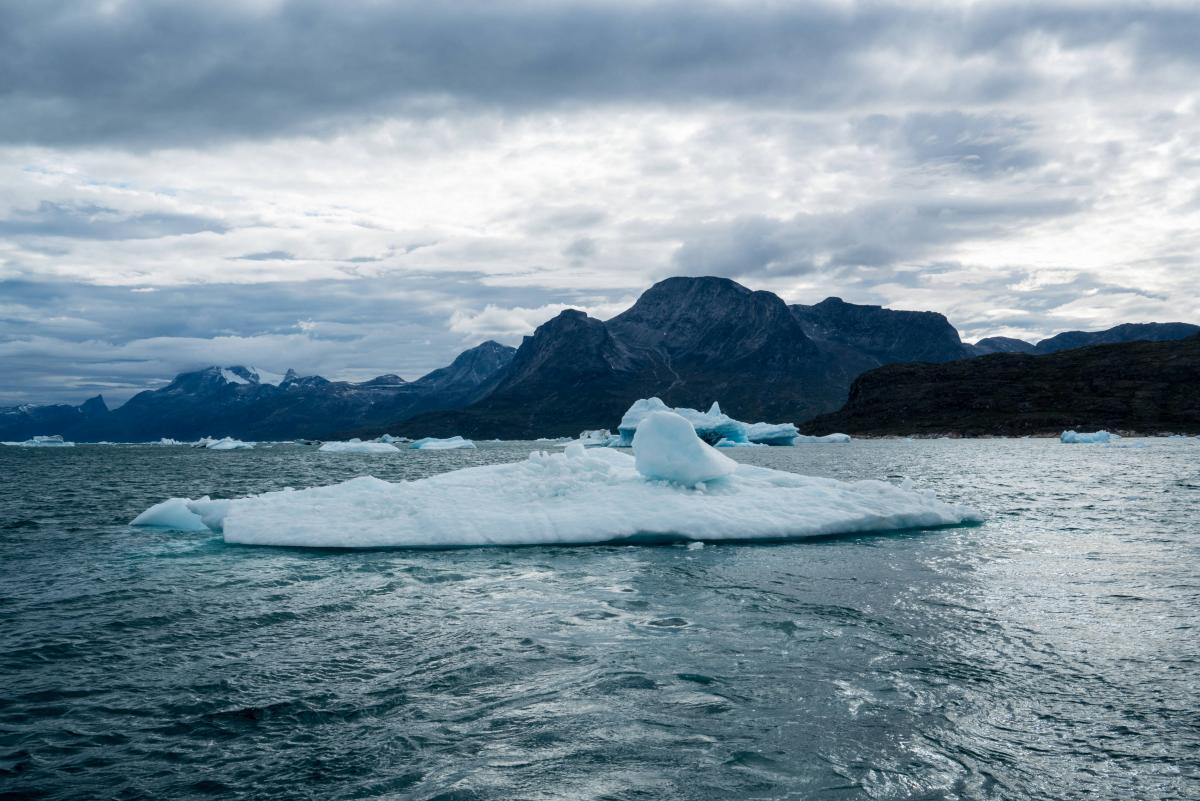 Such a tolerant approach to safety is right up my street. Not like in Europe or North America or Australia where it’s ‘DANGER!’ here, there and everywhere, ‘Don’t go near the edge!’, ‘Stay on the paths!’, ‘No climbing’, etc., etc. Apparently Greenland, alas, is slowly following suit, our guides told us; but only slowly thankfully.

On we sail, with the icebergs getting bigger and bigger…

And now, time for a swim. Naturally!

It turned out to be quite a comfortable form of swimming floating. Not cold at all in this special kit :). Some of us dared clamber up onto the mini-bergs… 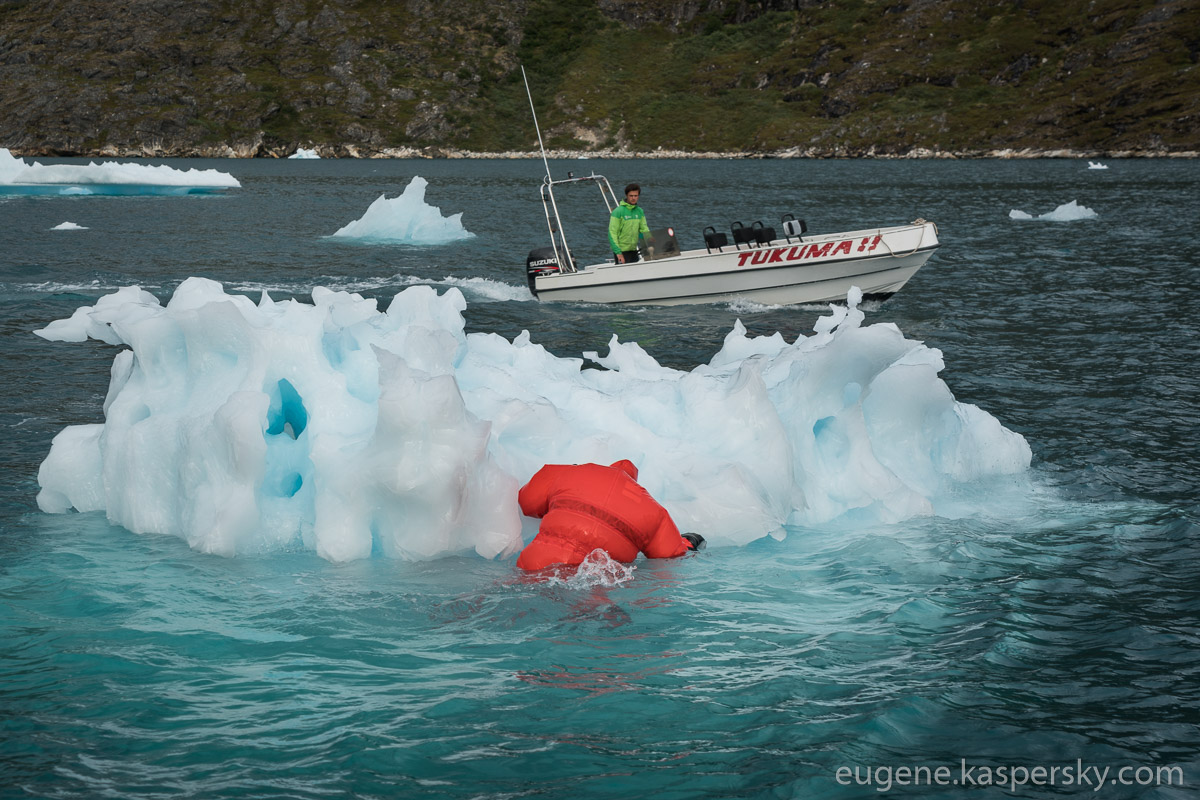 … Me included. But I was a little late. As soon as my not inconsiderable weight was added to the ‘berg it started to crackle! Off we jumped!…

Next up, we went ashore for dinner, plus an inspection of yet more modern-arty bergs… 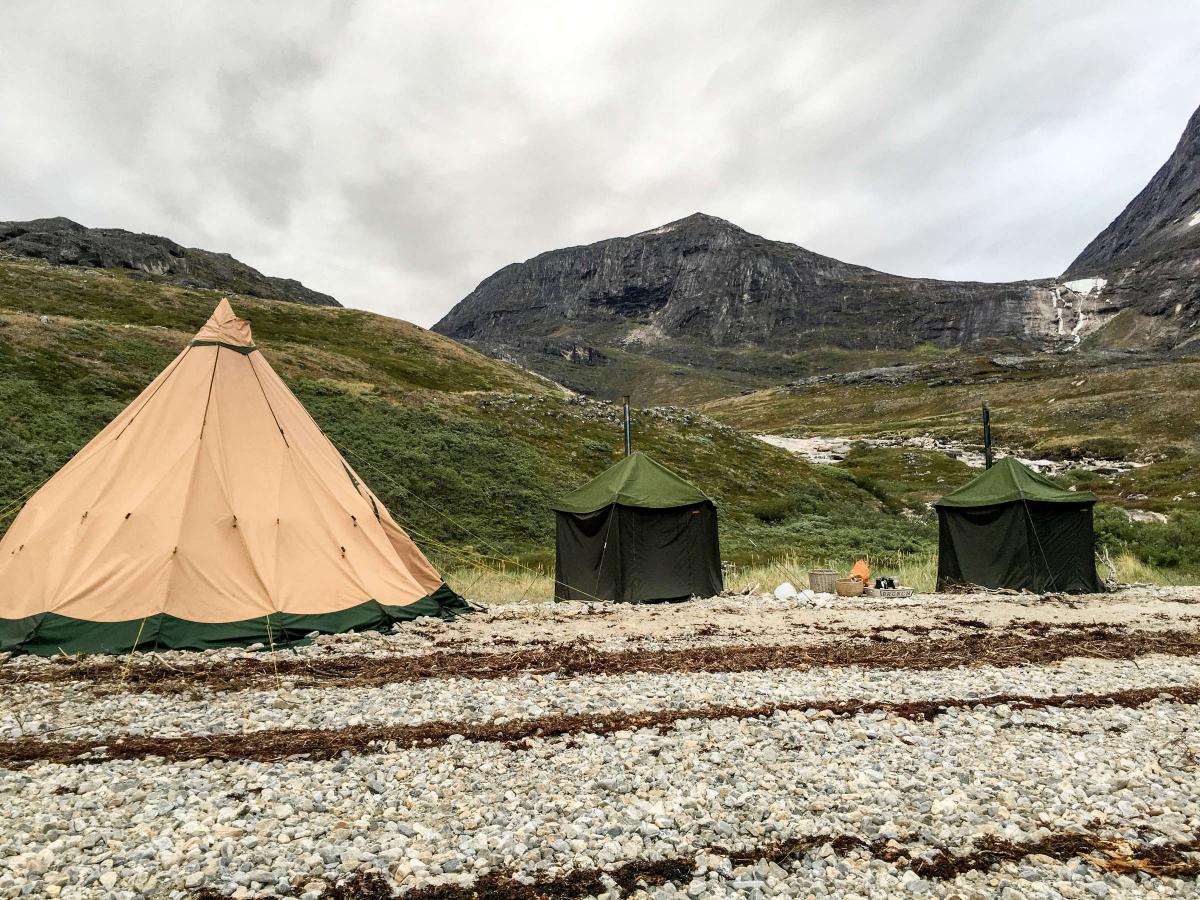 Then time for a dip in the fjord. We shocked our guides by going in the water in trunks! They’d never seen such behavior before! It wasn’t so cold, honest! Flip flops would have been useful though, as the beach was really rocky.

Here we came across some ancient ruins left behind by the Vikings. 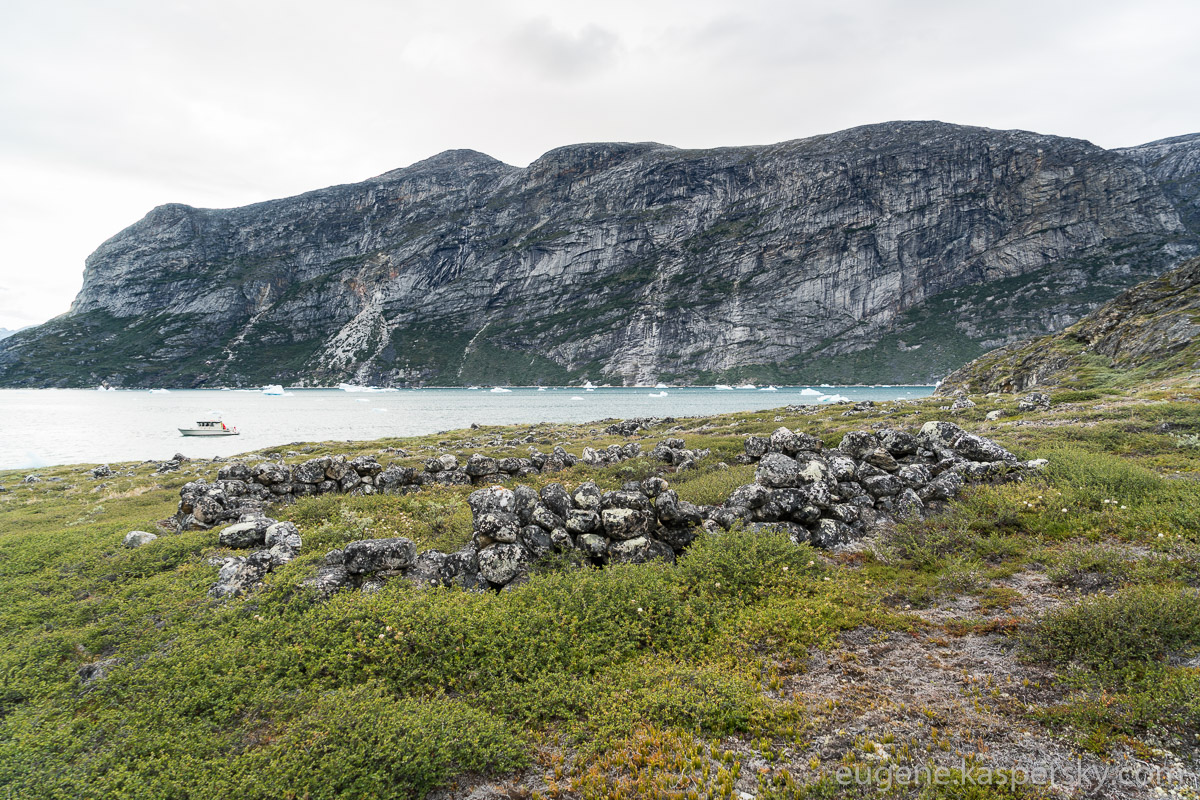 Apparently the first European to set foot on Greenland was a certain Erik the Red! Not that he really wanted to. Then he returned to Iceland and organized a large migration from there to the ‘new’ island. Interested? There’s more here. The Viking colony lasted a good 500 years, and then disappeared, leaving only ruins.

Quite why they disappeared – be it due to climate change, disease, war with the Inuit, or a mixture of factors – no one knows. They didn’t even have any ‘contact’ with the locals; a recent genetic study found there was no Viking blood in any of the local population whatsoever. They just came, lived a while, then died out. A mystery. 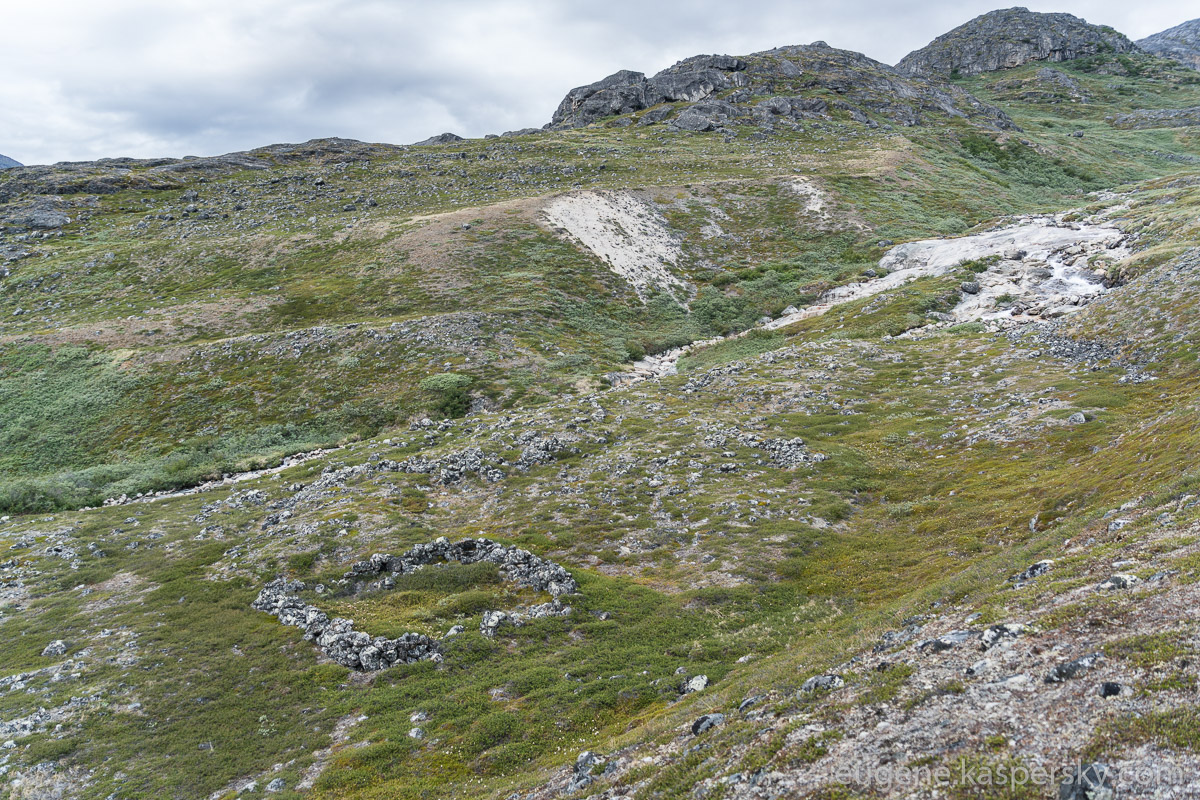 I wanted to write here about the ‘sunset’. On second thoughts: that’s no sunset. The sun doesn’t set here in summer, it just has a quick snooze and it’s back to its usual shining self!

Back tomorrow folks with more on our Greenland adventure.