Apologies for the chronological mix-up of recent events: The described-below happenings occurred before Monaco. So let’s rewind a bit… and off we head to the land of the rising sun.

Once a year in fall in Japan we have our regional partner conference, with accompanying whirlwind meetings, interviews, presentations, parties, and all sorts of other stuff. The highlight for me personally was how well my new presentation on how we protected the Sochi-2014 Olympics was received. The press liked it so much it appeared on the national news during prime time and was then repeated several times over. On the country’s No. 1 channel! Like! 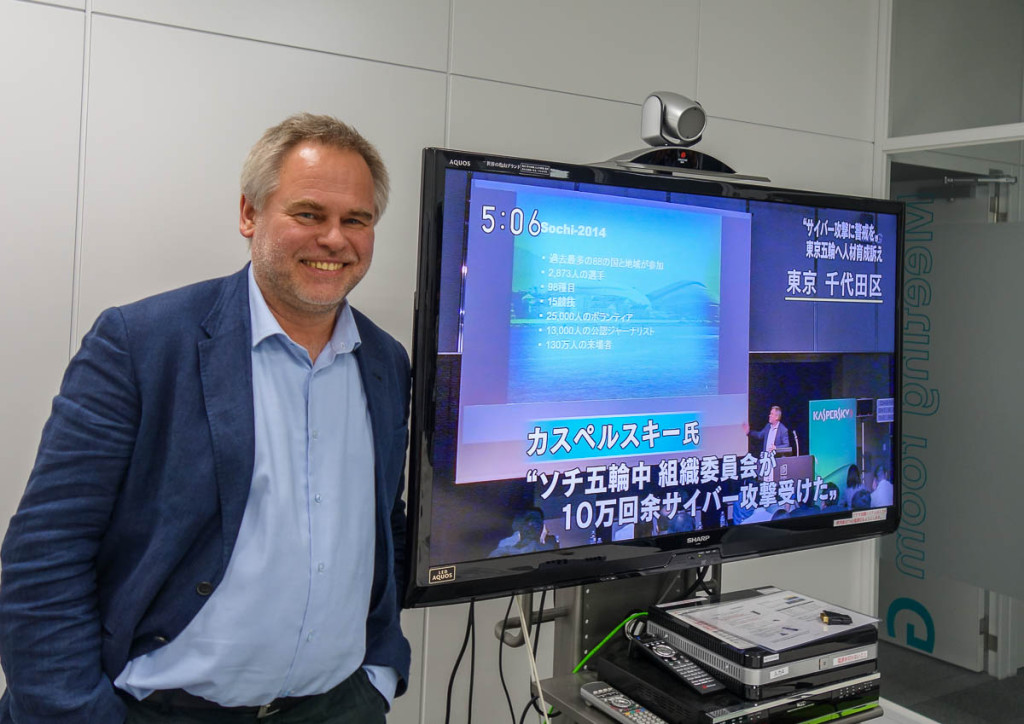 At least the data cable’s green 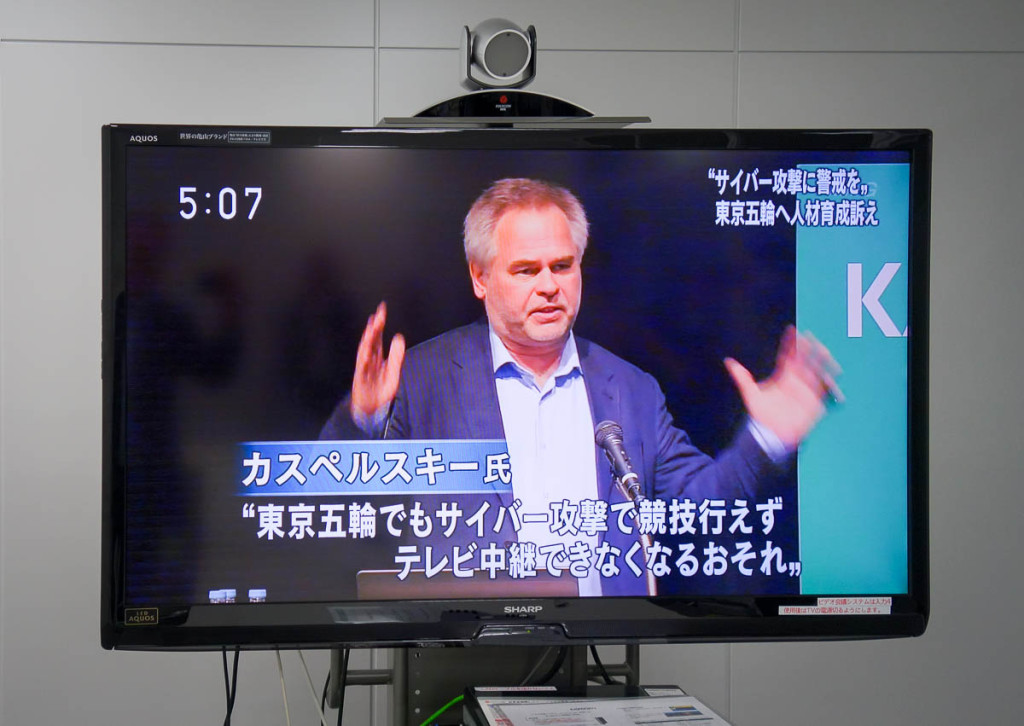 In Japan the bear is symbol of Russia (probably not only in Japan:). We’re the green IT security company; therefore, our mascot in Japan is a green bear. Perfectly logical. Resorting to a stereotype and painting it green? Absolutely! 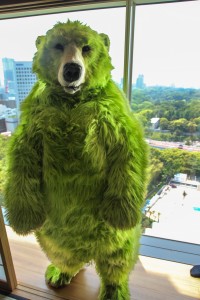 Just recently our bear was substantially redesigned and upgraded; now it looks like this (the bear on the right:) : 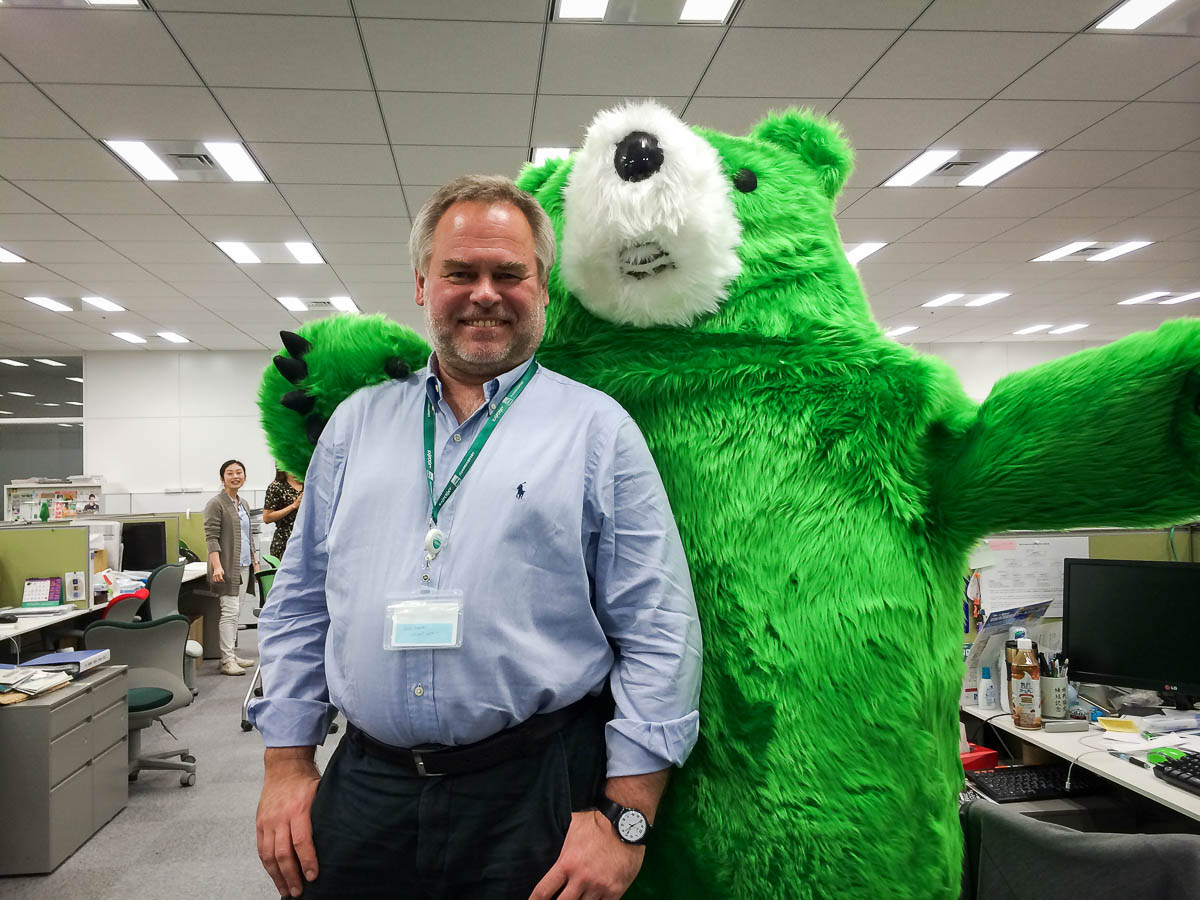 Another observation: software retail in Japan is kaput!

In the past I remember how the software department was roughly the size of a quarter of a soccer pitch. AV was sold from trays the size of a king-size bed. Shop assistants would call out for business much like newspaper sellers on the street, and crowds of shoppers would be thronging throughout the whole store.

Now? OMG! Software now takes up a whole… corner, and there are no sales assistants shouting for business – because there aren’t any shoppers either. The software business has gone online. It’s confirmed by our stats, and by walking around this store.

Now for something completely different, but still very much Japanese…

A few words about vending machines here. They’re everywhere: literally on every street corner. It seems this is their way of serving the nation with its daily shopping for necessities 24/7 – at the lowest cost possible. And the stuff you can purchase in them… well, you name it – it’s there.

‘Georgia’ coffee always gets me… 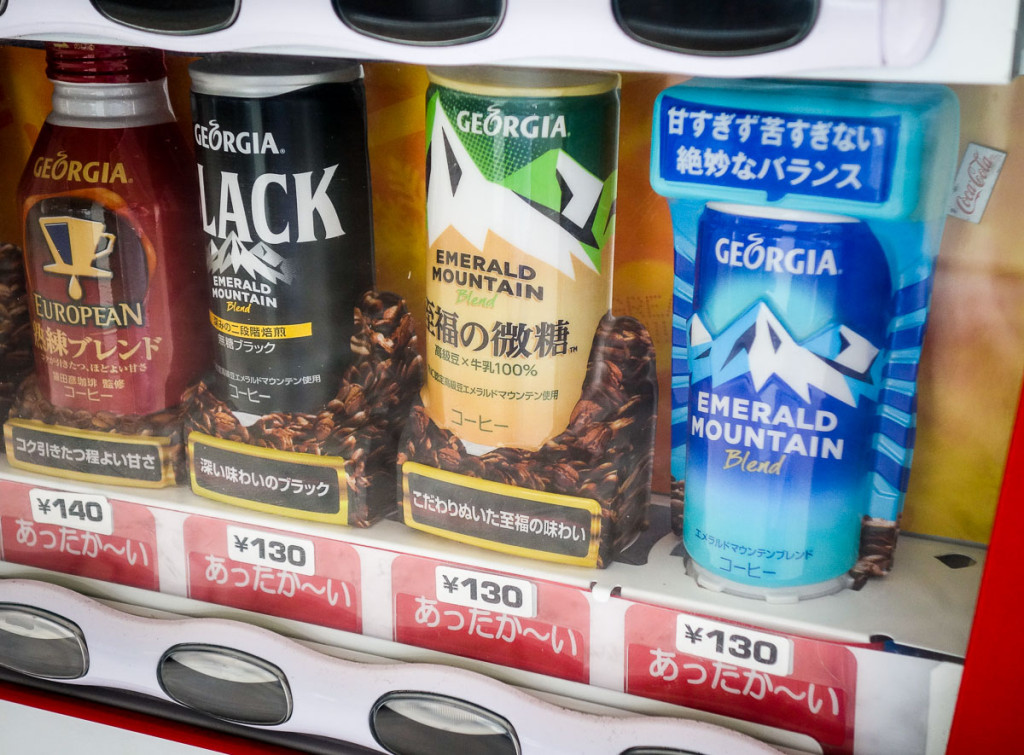 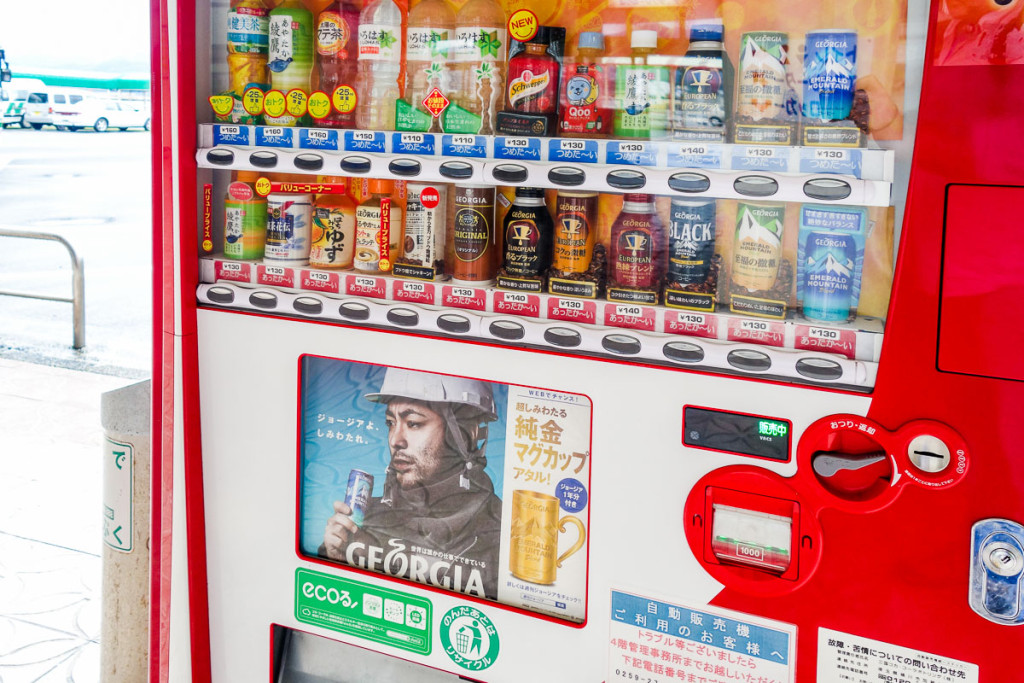 Georgia on my vending machine

But, hold on… actually, if we think about it… What have Stealers, White Sox or an Arsenal got to do with American football, baseball and soccer?! Zilch. But I digress…

Turns out these oddly-named drinks in Japanese vending machines taste real nice, and there’s always a good selection to choose from. Tea, coffee, with milk or without, cold, hot. More exotic offerings include piping hot miso soup in a metal bottle, or tinned sweetcorn, also hot – and incidentally my favorite snack from ‘Station 5’ on the slopes of Mount Fuji. Especially after the long trek up it and back down again :).

In mine I found a bottle of beer. At first didn’t pay attention to it. But when I finally got round to tasting it, that changed: it had all of my attention.

Unbelievable beer! Who can read Japanese? What is it? Get me 10. Containers! 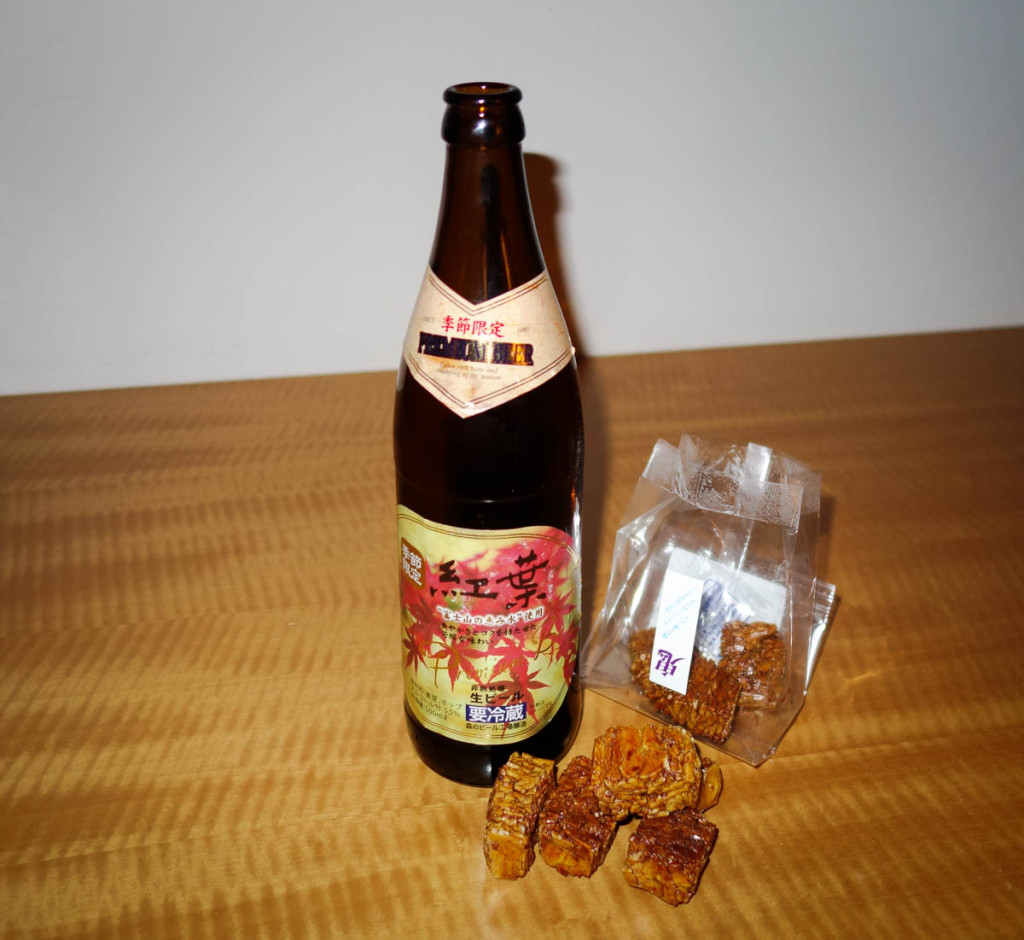 And next to the beer was a packet of unidentified salted snacks. Crispy. TASTY. The best snacks I’ve ever tasted even, just like the beer being the best I’ve ever quaffed. But what on earth the snacks are made I have no idea. Animal? Vegetable? A total mystery – at least for non-Japanese humanity. NYC pretzels, German wurst, British pork scratchings… they all pale into insignificance when compared with this mysterious regional gastronomic delight! 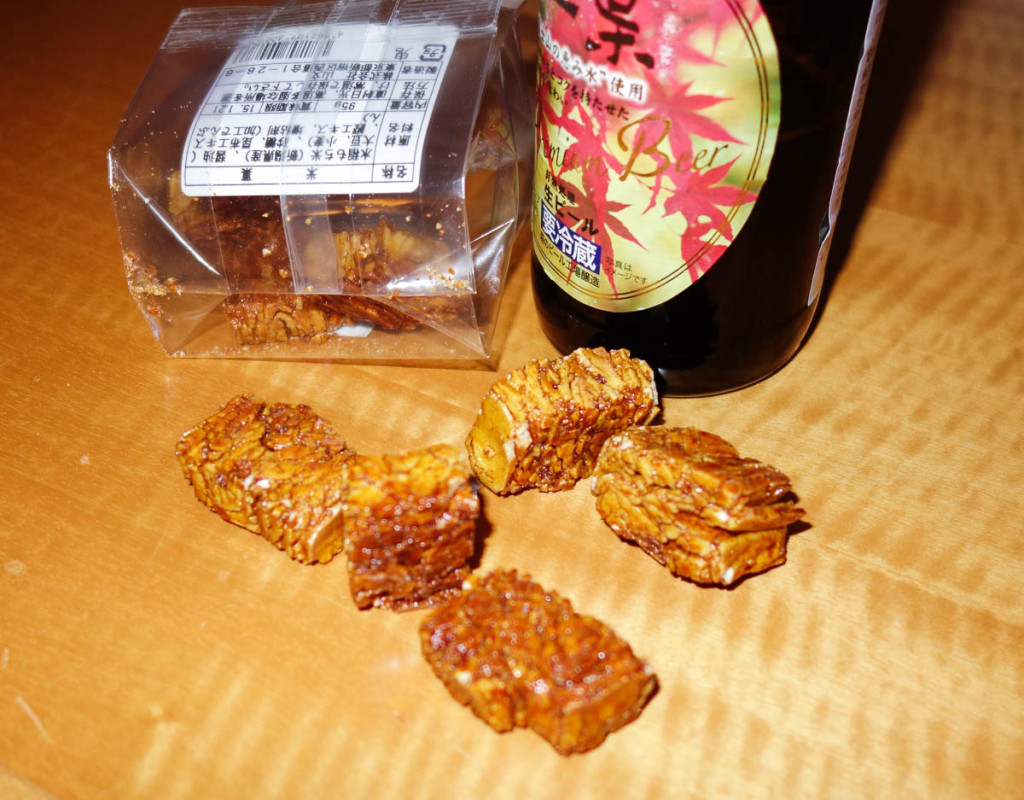 That’s it for today folks. Mysterious nourishment identifiers – please > the comments. To be continued!…