ZETA Shield follows another KIS 2014 debutante imported from our heavy-duty corporate products – Trusted Applications. ZETA also first appeared in our corporate solutions, where it’s more than proven its worth and has now been adapted for use in personal products. And as far as I know, it’s the world’s first use of such technology in personal products.

ZETA‘s work can be divided into two stages.

First comes the mechanical bit – the target needs to be taken to pieces. For instance a Word document might contain embedded items – other files, flash data, other documents, even an operating system distribution or a collection of viruses – anything at all! Our task is to identify the nature of all these items (and boy how they love to disguise themselves!) and classify them.

Then it gets more interesting… The heuristic analyzer kicks in – weighing up the contents, the layers of nesting, and the relationships among all these items, evaluating their similarity to templates of threats detected earlier, detecting anomalies, and taking a decision about how dangerous a given file is (whether or not it’s a binary weapon).

ZETA Shield works in concert with other protection technologies. As a result it takes more informed (better) decisions

That decision is a joint one, taken together with our cloud-based KSN security network, which gives the antivirus program statistics on detection of similar suspicious symptoms on other users’ comps. Via KSN we see the scale and geographical distribution of threats, can identify anomalies typical of a targeted attack, and gain a lot of other useful data to help us protect users in the future.

Another analogy!: What ZETA Shield does at first is a bit like identifying a car by its components. Plastic body? Drive to one wheel? Motorcycle engine? German? Must be a Trabant. Simple!

But what it does next – like breaking the Trabant down to its components and then analyzing all of them individually to see what they’re really about – that takes some serious brainpower.

Take the example of a targeted attack back in March: the selected victims were sent RTF documents with tempting titles like ‘Financial Results for the First Nine Months of 2012’, supposedly from the Rubin Submarine Manufacturing Company (yes, this type of social engineering still works). Deep inside the document both an exploit and a malware dropper were hidden away but – and here’s the rub – the antivirus they were using didn’t recognize them – the cybercrims had concealed them so well among various types of garbage! ZETA Shield on the other hand when shown the offending RTF located them immediately! 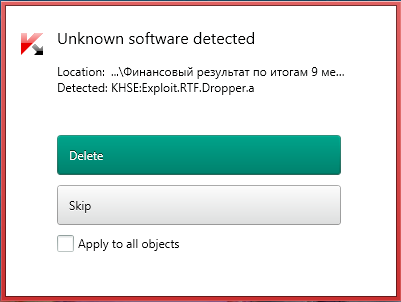 A feature of this technology in the corporate environment is the ability to ‘take apart’ not only individual files but also streams of data. At the end of the day every file is part of a larger picture, and it’s by looking at this larger picture (of all the components of the binary weapon) that it’s possible to see the more complicated relationships and take more informed (better) decisions.

Alas, in KIS 2014 ZETA Shield has had to be handicapped a little in the interests of productivity: The home version works only with files and only in on demand mode. Nevertheless, with proper system hygiene (i.e., regular checking of the computer at maximum scanning power), this is still a serious +1 to defending against targeted attacks on home users. (For example, senior managers may be targeted either while at work, or at home on their personal computers. At home, they unfortunately don’t have protection at the corporate server level. And this is where ZETA Shield comes into its own, working together with Trusted Applications and Automatic Exploit Prevention to accurately filter out attacks that use various vulnerabilities.)

Logical questions here would be (i) why put this clever server technology into a personal product, and (ii) who aims a targeted attack at a home computer (or also, say, a small firm)?

First of all, one important point:

Targeted attacks are not only launched against governments, politicians and big companies. Anyone can be a victim. And that’s why we’ve decided defenses against targeted attacks should be in personal products too

There’s a common view that targeted attacks are always aimed at governments, defense organizations, critical infrastructure installations or politicians, while if aimed at commercial companies – then at least those the size of Microsoft. Also, it’s often thought that the mind-boggling complexity of such attacks is worthy of… immortalization by Hollywood.

The reason for the first misconception can be explained by the fact that most of the media carry stories only about attacks at the highest level. And the reason for the second misconception comes from an abundance of incomprehensible technical terms or, on the contrary, a lack of information, with the logical train of thought going something like: ‘aha, they attacked a ministry, and ministries employ top security professionals and have good defenses, which means targeted attacks must take some real computer geniuses to pull off’.

But in reality almost any user or organization can become a victim of a targeted attack, as demonstrated by the antics of the Winnti hacking group or by the fact that commercial spyware like FinSpy exists. And don’t forget that computer threats are sometimes about as controllable as the flu – a targeted attack can go out of control and hit a lot of innocent bystanders (sometimes from one’s own camp!).

And as for the apparent complication of a targeted attack, well, the word ‘apparent’ hits the nail on the head. Yes, there are complicated cyber-operations (like Stuxnet and Flame). But the great majority is assemblies of known methods with a sprinkling of social engineering. And it’s actually becoming easier and cheaper. You can buy exploit kits for about a thousand dollars and put them together like a model kit.

With ZETA Shield we’re ready for what the future will bring. And now you are too

Finally we come to the main reason for including ‘clever server technology’ and multi-level protection in personal products.

Any invention, including an evil one, has a life cycle. Sooner or later a broad spectrum of cyber-baddies will find a way to apply even the most complicated of attacks which were earlier the preserve of top professionals (yep, the commercialization of targeted attacks). But we’re ready for this: already KIS can withstand serious assaults from tomorrow’s malware!

In summary: We’re ready for what the future will bring. And now you are too.