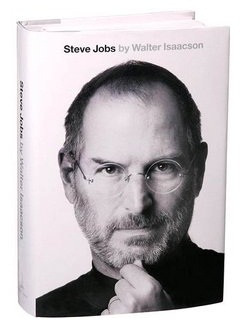 Phew. Finally got through them all – more than 600 pages of the Steve Jobs biography.

Despite the abundance of waffle in this tome (about 80% of it could easily have been ditched without really losing much) the book’s still an interesting read, demonstrating well why Apple is as it is. I’d heartily recommend it to anyone interested in the history of, and prospects for, the IT industry; particularly to those who want to discover Steve Jobs’ take on the IT confrontations of both the past and the present – Apple against Google, Microsoft, HTC, Samsung and others; and also those who follow or engage in the eternal holy-war forums that debate which products are better, cooler, the prettiest, etc.

My thoughts on Apple and Jobs are mixed. I’m rapturous about some things, highly critical about others.

On the one hand – it’s a brilliant company, which really has changed the world. My first ever desktop computer was an Apple-II in the mid-eighties (my second was an IBM clone – an Olivetti-24M), and the latest gadgets I bought just a month ago were an iPhone and an iPad (not for myself – they were presents; honest!).

Curious interjection: It just so happened that one of our important events in New York late last year started on the day the death of Steve Jobs was announced. Opening the event, I gave a short speech in his memory. In this address I compared him with Edison and Ford, adding that the name Jobs will always be remembered in the same highly esteemed category as theirs. You can imagine my astonishment when later that day I discovered that on the front page of the Wall Street Journal were printed practically the very same sentiments almost word for word (I kid you not!).

On the other hand… well now here we need to read the book. And to understand some of the facts contained in it. Here are some examples:

In 1979, Apple (or Jobs? In many ways these two words are synonymous) worked very closely with the Xerox PARC research center and went on to quite simply pinch a load of its ideas (for example its GUI concept and even… the mouse!). A citation from the book (NB: all citations are reverse translated from the official Russian translation – couldn’t track down a copy of the book in English in time to check the original wording):

Apple’s raid on Xerox PARC can be described as the most audacious theft in the history of the computer industry.

Jobs himself commented on this like this: “We have always been shameless about stealing great ideas.” Nice. Not.

What’s so hypocritical is that, if we wind forward to 2012, Apple’s initiated lawsuits against HTC and Samsung (that is, against Android) and other manufacturers of mobile devices for (allegedly) violating its patents, which cover such “unique ideas” as a multi-touch user interface and devices’ conceptual designs. The most amusing of these was the attack on the multi-touch gesture “slide to open”. So, what, now all producers of door latches will also need to give kickbacks to Apple for their “original” genius-like idea?! Jeeez, they’ve a nerve.

// We should also remember here the litigation against Microsoft in 1994 for alleged copying of Apple’s ideas for a user interface – but that was when Apple was Jobs-less… Still, on this episode he also expressed his opinion:

Bill is basically unimaginative and has never invented anything, which is why I think he’s more comfortable now in philanthropy than technology. He just shamelessly ripped off other people’s ideas.

…Talk about the teapot calling the kettle black!

This is how I translate Apple’s “Think Different” ([sic.] Don’t they do English grammar in Cupertino? :-) advertising slogan. Why? Because “think differently, think of different things” – this is an address not to all the dear users of Apple products (and not only Apple products). “Think Different” – it’s not about you, it’s about Apple. It’s the company and its employees that must think differently, be different, and in every way possible invent and demonstrate its individuality. Whereas users of Macs, iPhones, iPads, iPods, etc. must reject all notions of their individuality, and should all think in the same way, strictly within the rigid framework of Apple products and services. Thus, for the first versions of the iPhone it was impossible to develop third-party software applications. It became easier – but only a bit. iOS to this day has remained a closed operating system… but more about that below. It was for this reason that Jobs forbade iTunes for Android. Quote:

… it’s true – they do think differently!

3. Be simpler and people will like you more – or – Open system against closed.

I was shocked to find out that Apple’s strategy of its products being closed caused much argument within the company as well as without. Many Applers tried to convince Jobs against being so strictly closed and to license Mac OS to other platforms. Even Bill Gates has repeatedly (and as far back as 1985!) tried to persuade Apple to open up its system and license it to third party hardware manufacturers – despite knowing that this would see a portion of Windows users going over to Mac OS.

A citation from the book:

Jobs objected to cloning … with regard to such things he had an inborn aversion. One of his fundamental principles was the idea of full integration of [Apple] hard and software. He loved to control everyone and everything.

Yeah, real “Thinking Differently”. (And the degree of protection against viruses here has absolutely nothing to do with how closed a system is – though some think otherwise). Jobs in every way possible limited the ability of non-Applers to ‘get at’ Apple products, including forbidding disassembling and upgrading its products (the absence of specific expansion slots, non-standard hard drives in Macs; no access to the battery in an iPhone; etc.; etc.). And all this was done for one reason – “to control everyone and everything”.

Now let’s watch an ‘updated’ version of the clip above:

Apple makes fantastic hardware, but closes off the operating system, limiting both its development and the freedom of choice of the user. Others make open systems that are installed on poorly designed hardware – but the result still turns out to be the winning one. Then the producers of this poorly designed hardware sooner or later get their act together and catch up with the leading design. But can Apple continue to come up with new brilliant concepts after Jobs and keep up in the race? We’ll just have to wait and see.

And on a final note…

I wonder what the world would look like if Apple had opened up its operating systems and made them accessible to third-party manufacturers and software developers. If they’d at the same time continued to release new super-duper hardware, generate new ideas in design and user interfaces, and create new media services. Would there even be any room in this world left for Microsoft Windows, Google Android, and other platforms? It does make you wonder…

And now it’s time for me to wander…