The Putorana Plateau is one of the most breathtakingly beautiful places in the world, that’s for sure. That is… in good weather (just like Kamchatka and the Kurils). I keep writing that – “in good weather” – all the time of late. I should abbreviate it: GW. So yes – in GW, the landscapes here are simply mind-blowing: 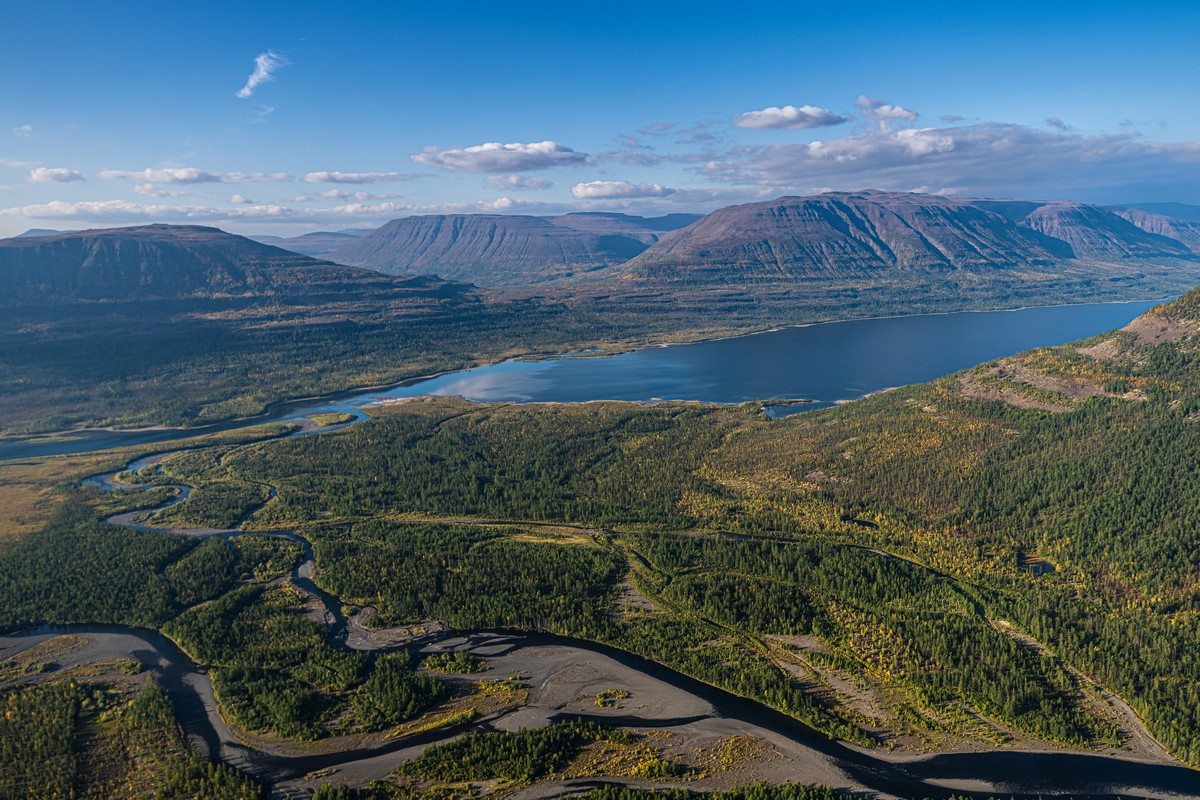 As mentioned, there are a great many lakes here. So, you’d guess that means maybe a dozen, or scores? Actually, there are more than 20,000 of them! Meanwhile, here’s… one! -> 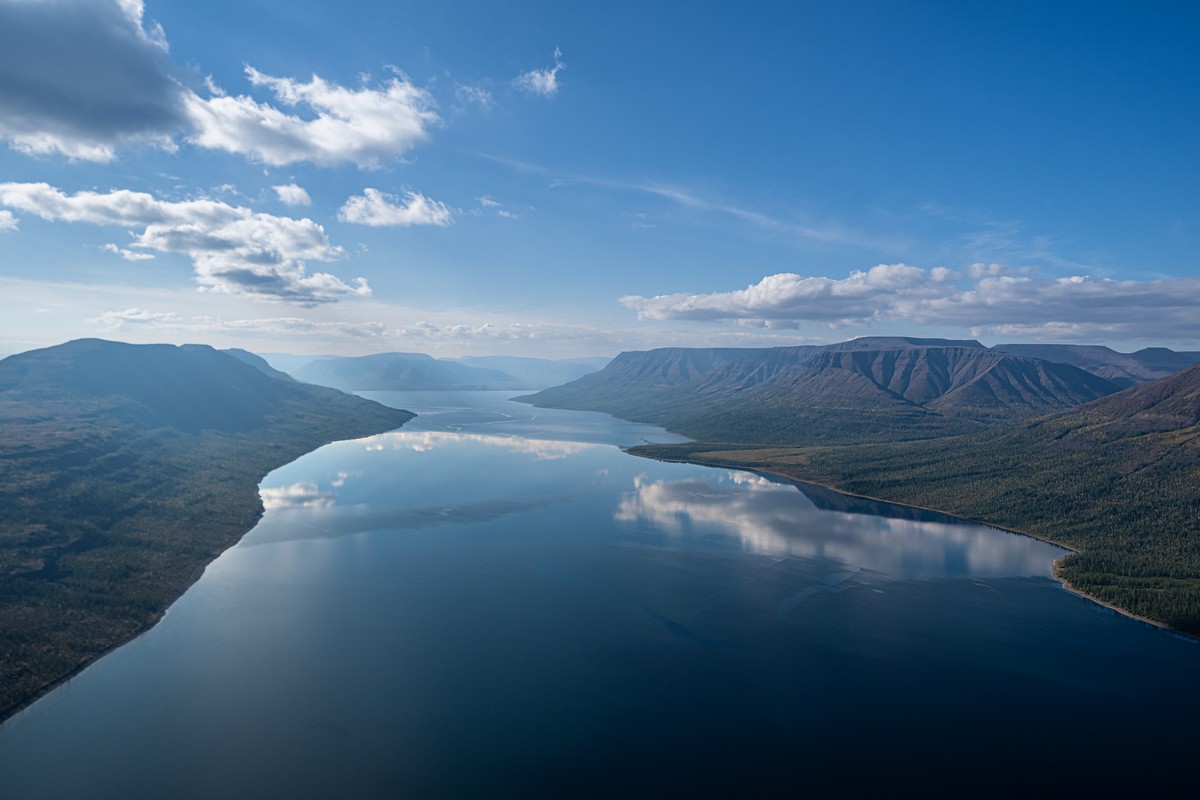 How many rivers there are I’ve no idea, but it’s probably in the tens of thousands too. 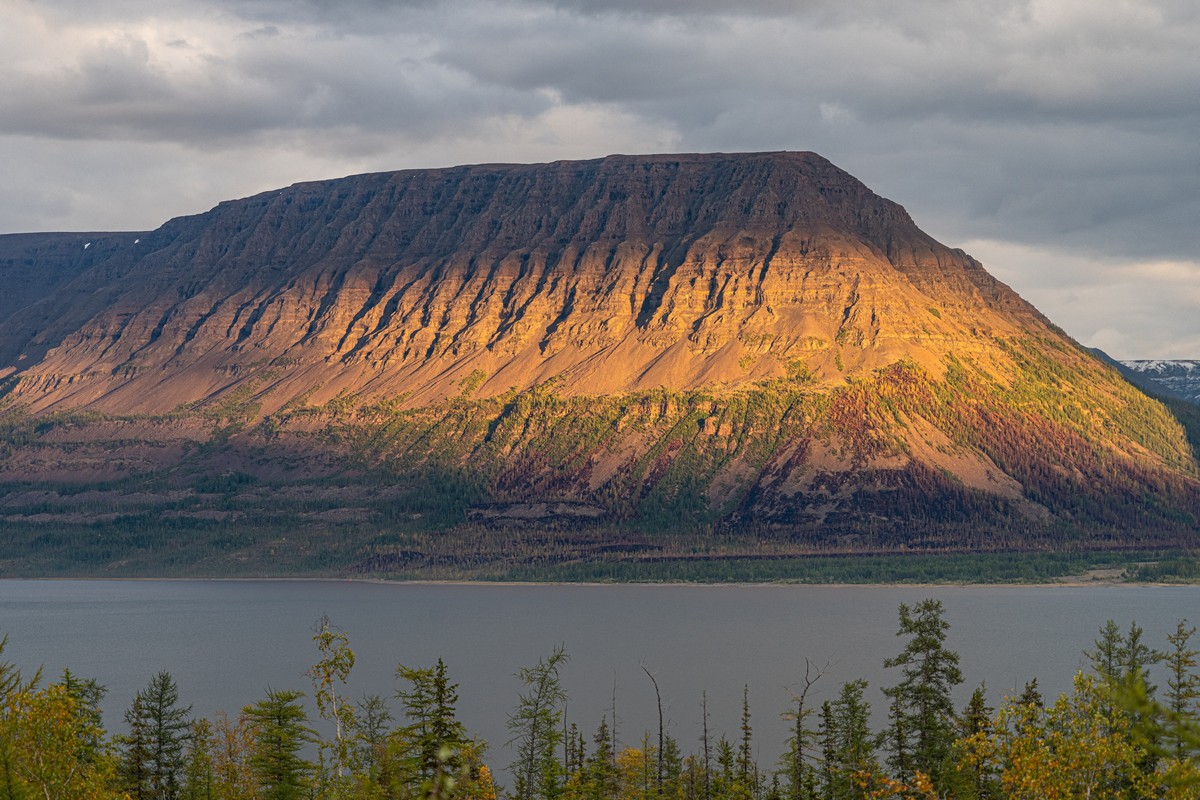 The Putorana Plateau is a massive… massif of volcanic origin, that reaches up to nearly 1700 meters from sea level, while having an area of nearly 500,000 square kilometers – which is almost the size of Spain! 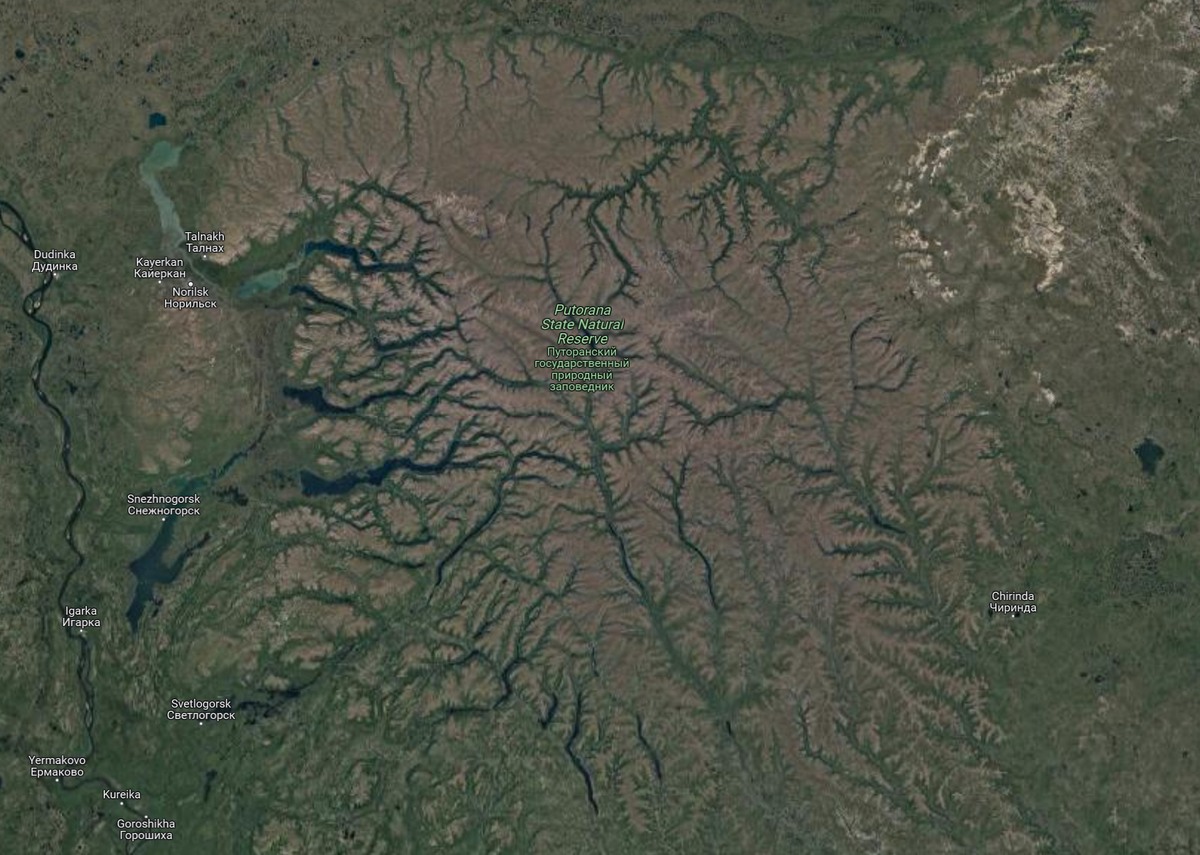 And now, after my teaser in the previous post, for some kasperology. Quick disclaimer: I’m not geologist or paleontologist, so please don’t take anything written here as scientific fact; it is, after all just kasperology!…

Geologists and volcanologists reckon that somewhere around 250 million years ago there was a colossal volcanic eruption here – a supervolcanic eruption, even. In classic volcano fashion, out spewed the magma – only in extraordinarily gargantuan quantities – and ever so quickly. And this supervolcano stayed active for… wait for it… 60,000+ years – throughout which it kept emitting millions of cubic kilometers of various volcanisms. It made such a mess of the environment-ecology that most life on earth died out: 96% of sea life (if Wikipedia is to be believed) and 73% of vertebrates. It also caused the largest known mass extinction of insects – perhaps the only mass extinction thereof (and who said cockroaches always survive this or that cataclysm?:).

The eruption of the Siberian supervolcano changed the climate on earth so much it basically reset the evolution of biological species. The climate changes were in fact so dramatic that geologists-paleontologists use the time of their taking place as a line in time between two geological eras: the Paleozoic, which they (the dramatic climatic changes) brought to a close, and the Mesozoic (which, btw, later ended with the Cretaceous–Paleogene extinction event (the well-known one, which finished off the dinosaurs – if it wasn’t a meteorite)).

And what’s left today of the prodigious supervolcanic event is the Putorana Plateau, part of the Siberian Traps.

The grandiosity of those geo-upheavals and their consequences might be better grasped if we compare it to something similar – but of a much lesser scale. So, let’s take an atoll. This is also a volcanic formation. Actually, an atoll is simply an island that appears after the eruption of an underwater (oceanic) volcano. It starts out small, often around a kilometer in height, in a pretty cone shape. The volcano slowly dies down, the volcanic cone stops growing, and good old erosion takes care of the rest – over… 10 to 20 million years! And voila – you’ve a beautiful atoll where the volcano once was.

Once more: 10-20 million years of natural slo-mo erosion in oceanic conditions, and what you get is – no island left (just the outer rim upon which coral formed – the atoll). Whereas, here, with the Putorana Plateau, we’re talking… a quarter of a billion years! Also, the Putorana volcanisms weren’t chewed away at by just (liquid) water and wind. There was also the effect of glaciers some kilometer thick – and more than once, which slowly ground away at the rock. How many global coolings and ice ages have there been since then? Ah – and surely there remain morainal marks? Any geologists among you, dear readers? Maybe you can tell us a bit more about this topic?

Continuing the theme, what we’ve got is 250+ million years of erosion, yet we’ve got volcanic rock that’s kilometers thick still today! Just imagine how tall the volcanoes were early on! If only I had a time machine so I could go back to find out! I could also take photos to bring back to fill out this here blogpost ).

In the meantime, you’ll have to settle for these pics I took the other week from the chopper: 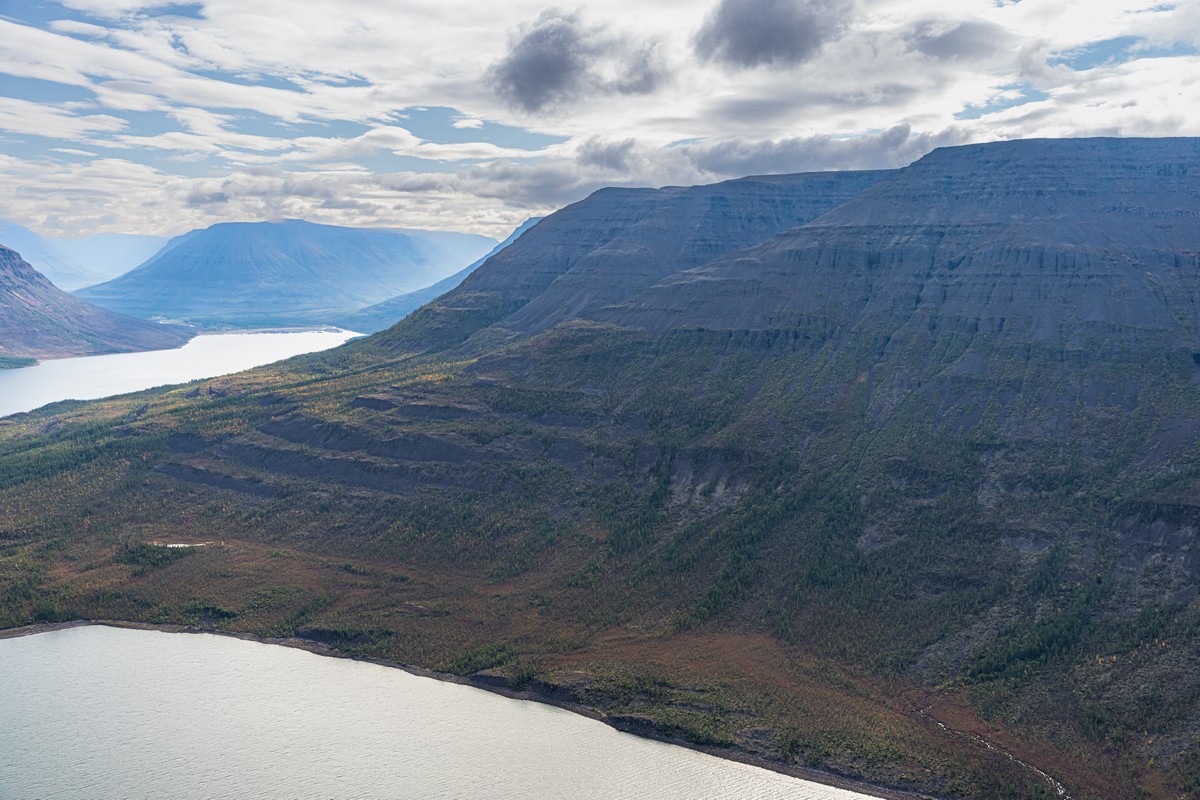 A trap, btw, is a volcanic term, which comes from the Swedish for “stairway” (trappa). Prolonged volcanic activity releases massive quantities of lava which are spewed out and spread across a vast surface in a thick layer. The lava then cools, becomes hard, while the volcano carries on spewing – but this time not lava but volcanic ash and slag, which it sprinkles on top of the hardened layers of lava. Then comes fresh lava again, then ash, then lava again, over and over and over. The result is a stratified construction – a bit like a layer cake. And when the eruptions finally stop, the process of erosion begins, eventually exposing the stratification:

Lower down the slopes – taiga and tundra vegetation, with the underlying stratification still visible in places: 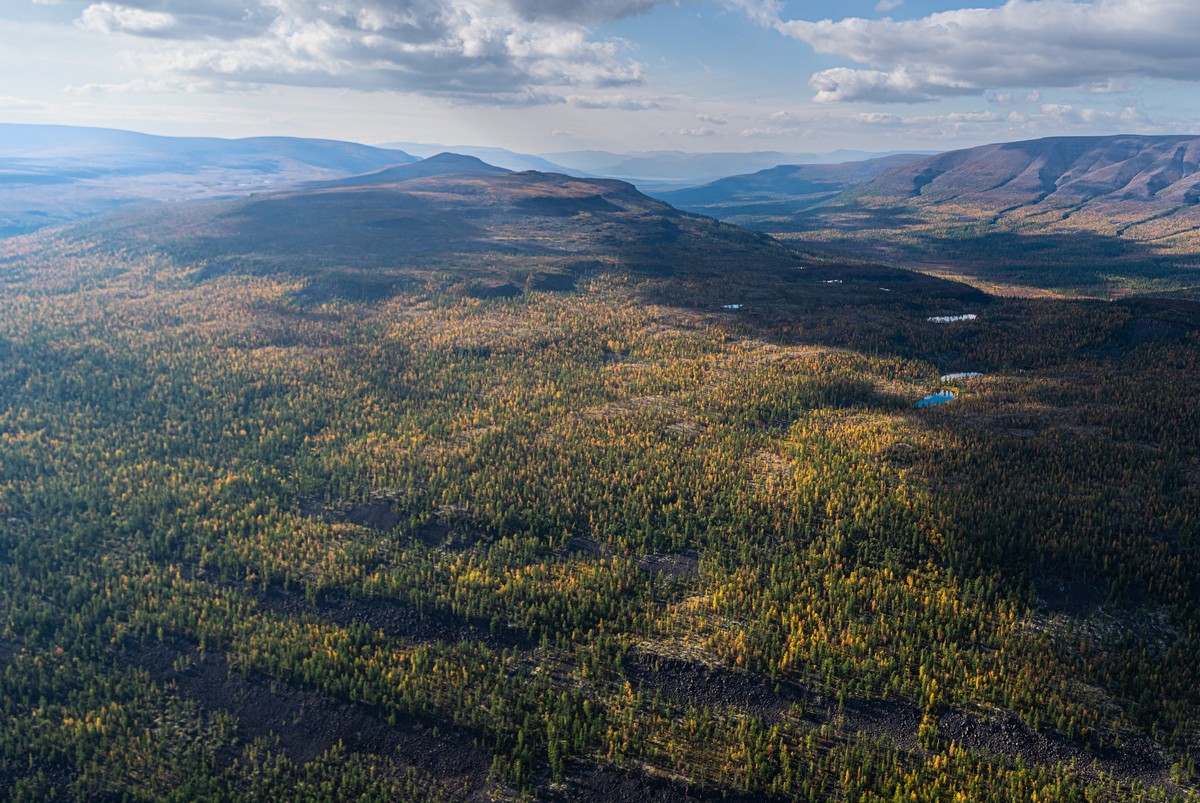 Meanwhile up above – the plateau. No peaks, just plateau! -> 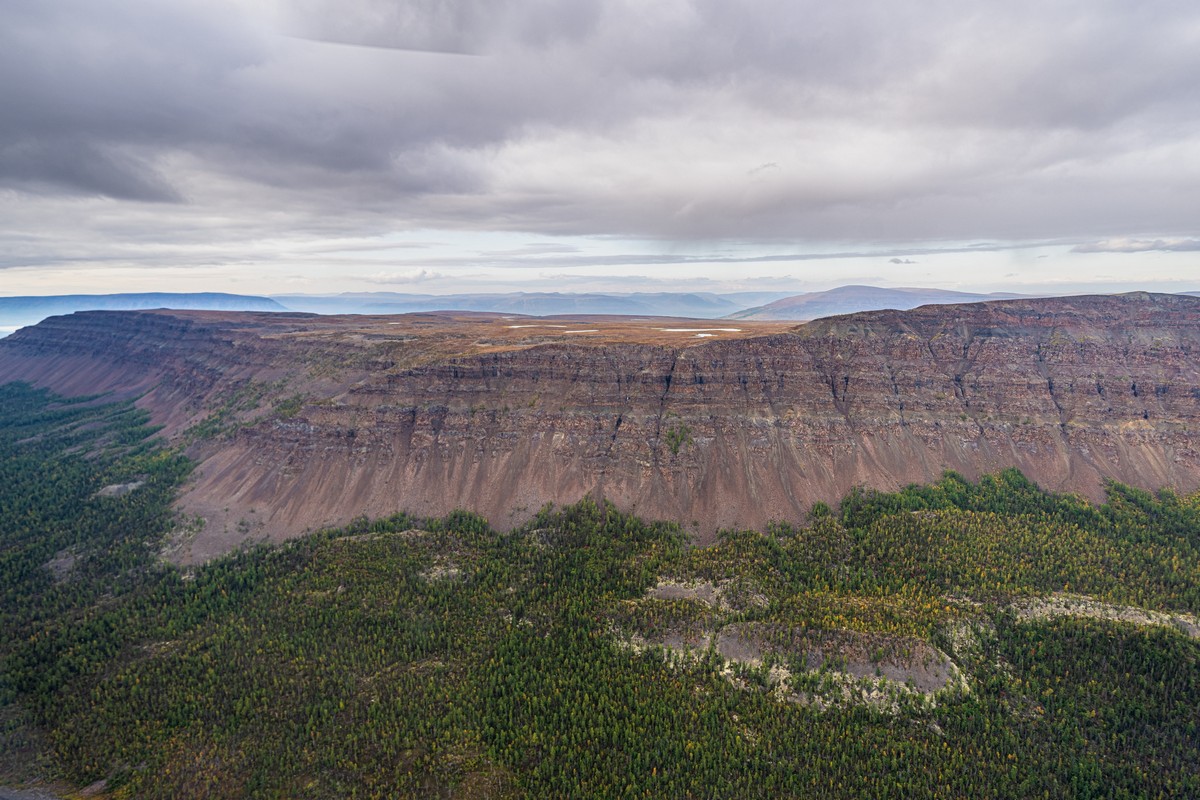 When the layers of liquid lava cool, sometimes a process called Rayleigh–Benard convection gives rise to so-called Benard cells – beautiful column constructions. You can see these in different parts of the world, like at Giant’s Causeway in Ireland, or Cape Stolbchaty on Kunashir – one of the Kurils. I didn’t see any Benard cells here at Putorana, but I did see formations that (sort of) resemble them:

Waterfalls! In short – there are a zillion of them here. But more on those in an upcoming post… 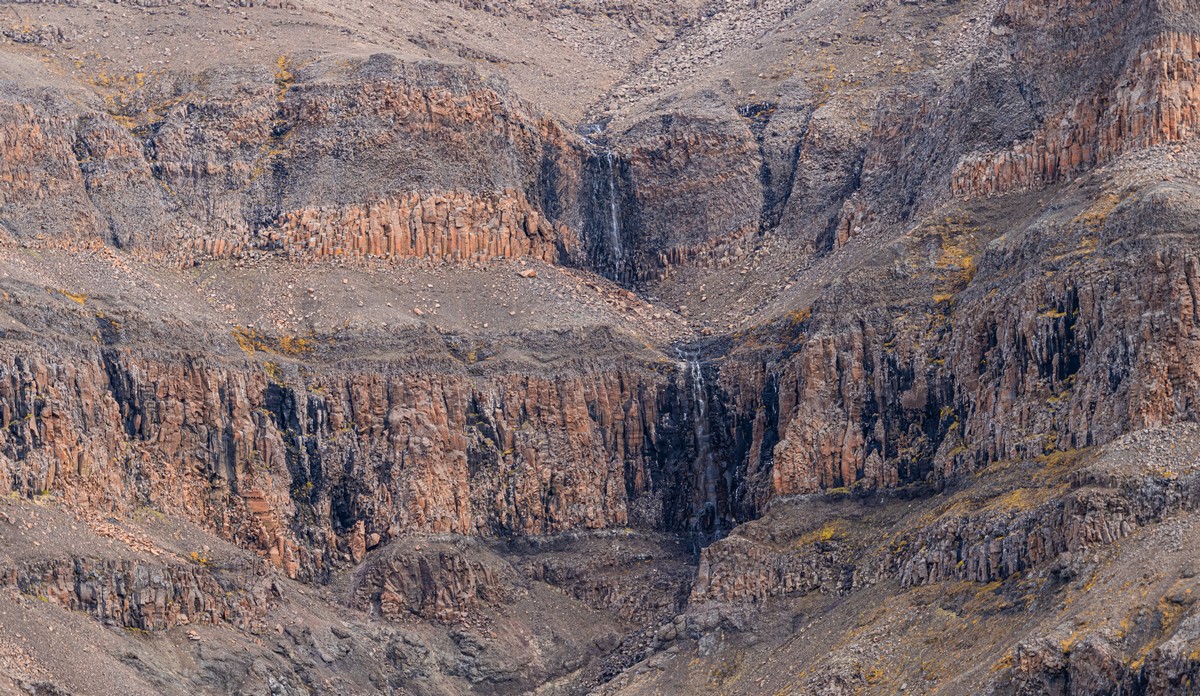 Btw, when the weather worsened, there was some snowfall atop the mountains. In August! One kilometer above sea-level! That’s just how things are in a subarctic climate…

That’s all for today folks. But I’ll be back with more from the Putorana side shortly…

All the snaps from our Norilsk and Putorana visit are here.