Of course, we weren’t expecting clear, sunny skies all day – every day – on our Kurils-2022 expedition. We weren’t even expecting the light showers that fall in places like the Côte d’Azur or Costa Brava that get swiftly shooed away by warm winds. This is the Kurils, baby – why a cyclone can kick in and shroud the islands in fog for days. But we were hoping for at least a little sun – like what we had back in 2019…

In particular, we were hoping for sun on our Ushishir day(s). Here’s why:

And from the other side… -> 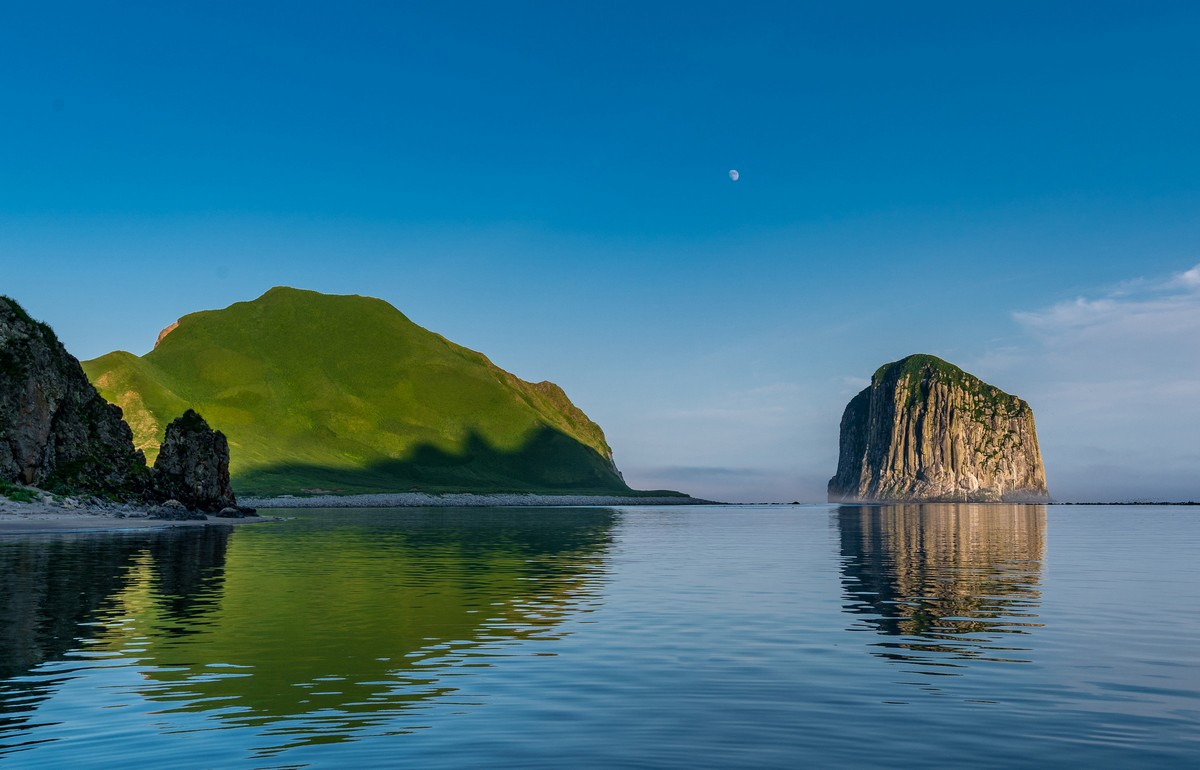 As the sun sets, its rays cut through this here grotto: 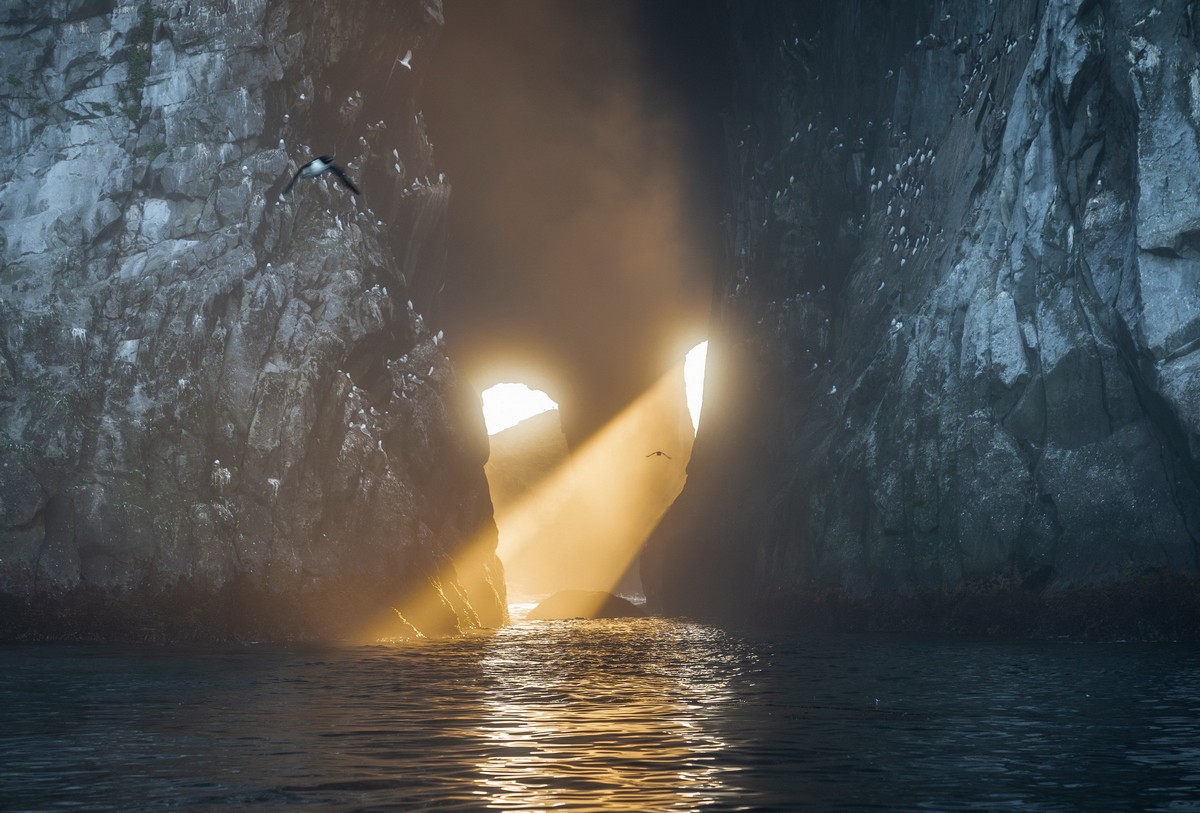 A full five (!) islands can be seen in this photo: 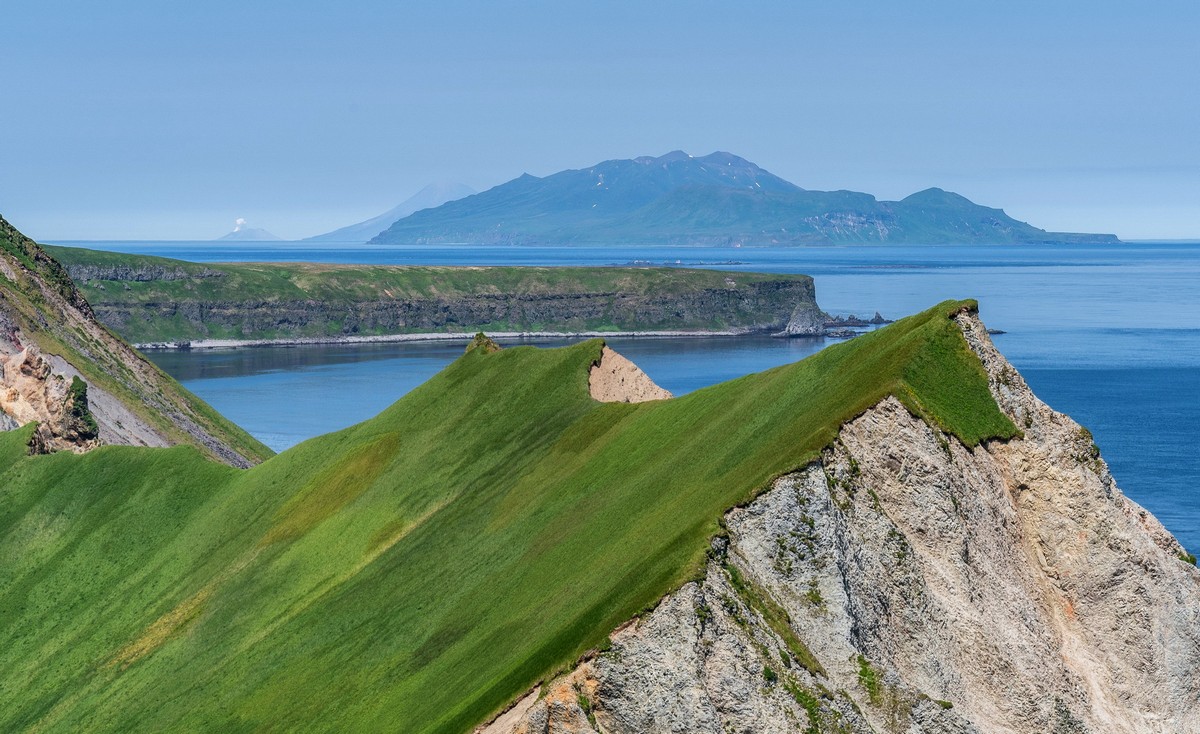 Alas, from this day until… the end of the expedition, the weather was simply awful – practically non-stop! Out of all of the 25 days of our trip – a mere two were sunny. All the other days were either completely sun-free, or with the sun showing its face for a short time at sunrise and even less at sundown. In… six words – catastrophic weather for your summer holidays! ->

Fairly enraged as I was that I wasn’t going to get in a sunny Ushishir-meditation this year, I didn’t even bother climbing up the caldera. DZ, however did; accordingly, these are his time-lapses/photos…

If you’re lucky, you can take the motorboat into the inner bay:

The view of the whole island: 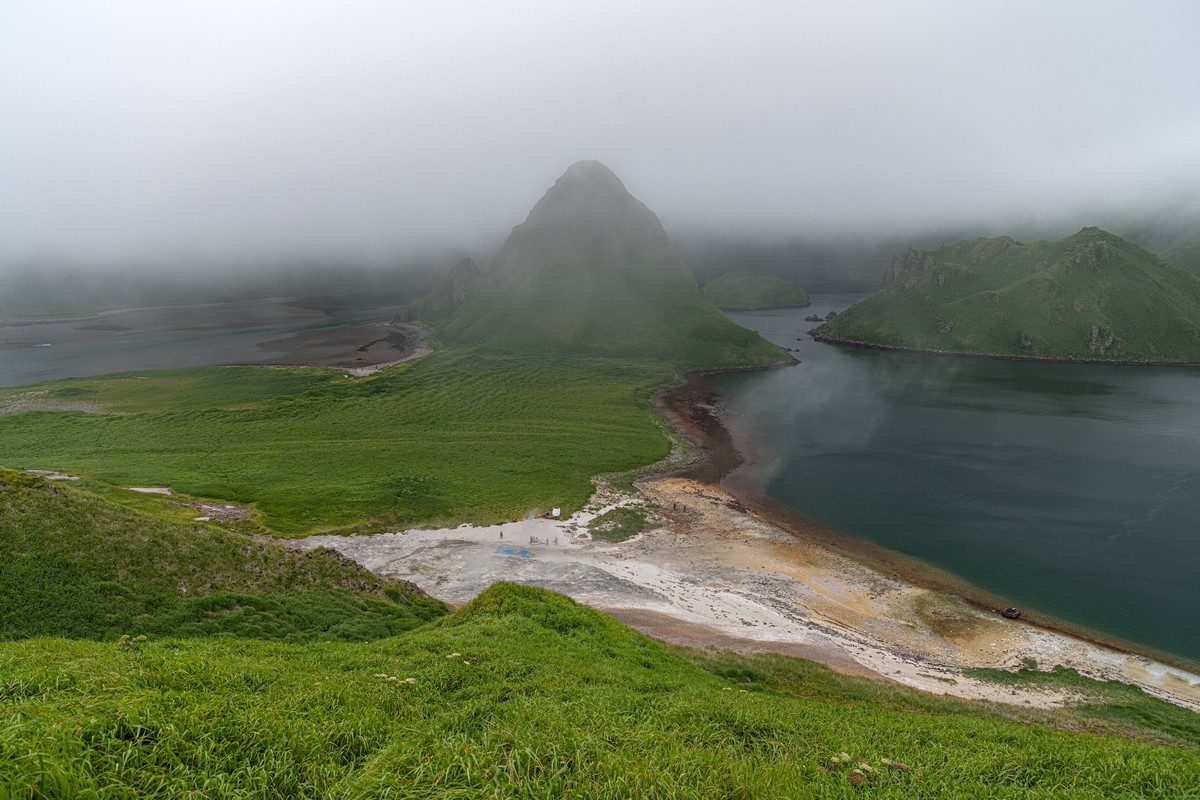 All the slopes are overgrown with this lush grass: 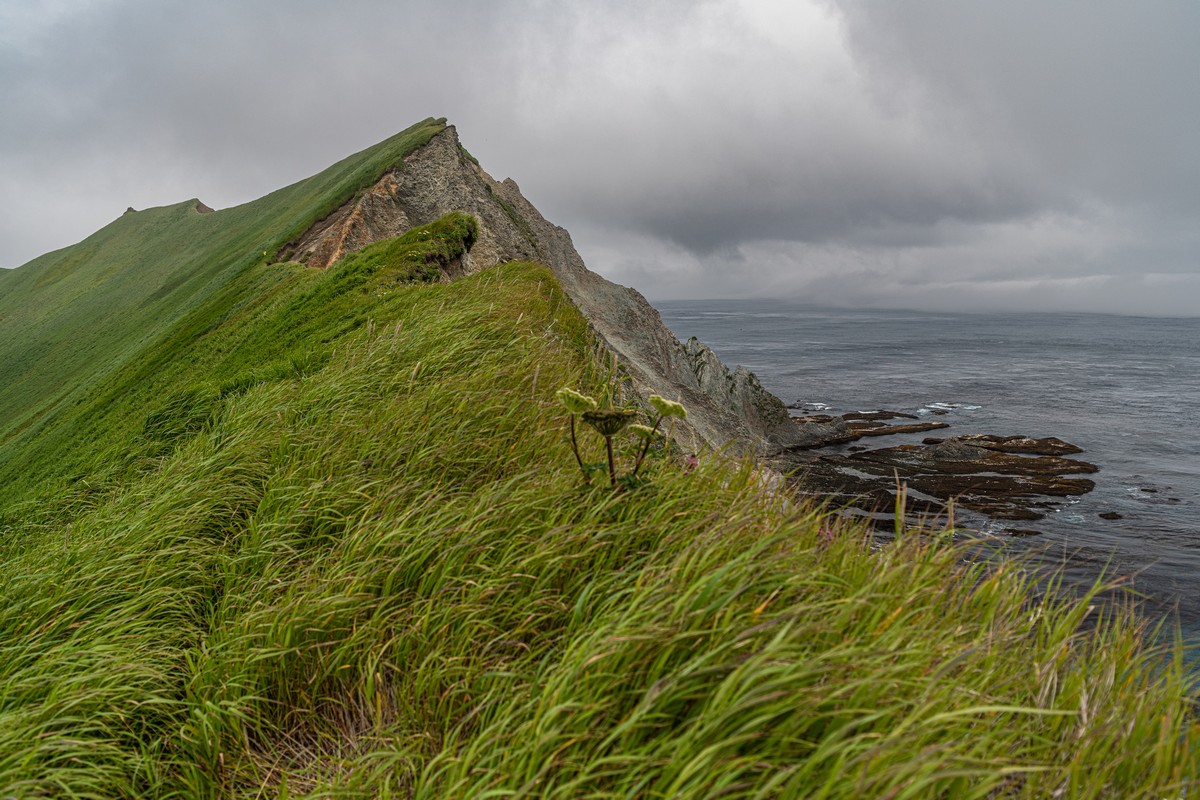 When it’s windy the slopes resemble some kinda green sea:

The views can be simply spellbinding… in good weather; shrouded in mist, fog, cloud, or whatever that darn opaque gray stuff is – the views are great, but not quite spellbinding…

In 2019 a sperm-whale’s carcass was washed up onto the shore here. Breakfast, lunch and dinner – for months if not a year (woah – rhyme!) – for the island’s polar foxes, that was for sure :) -> 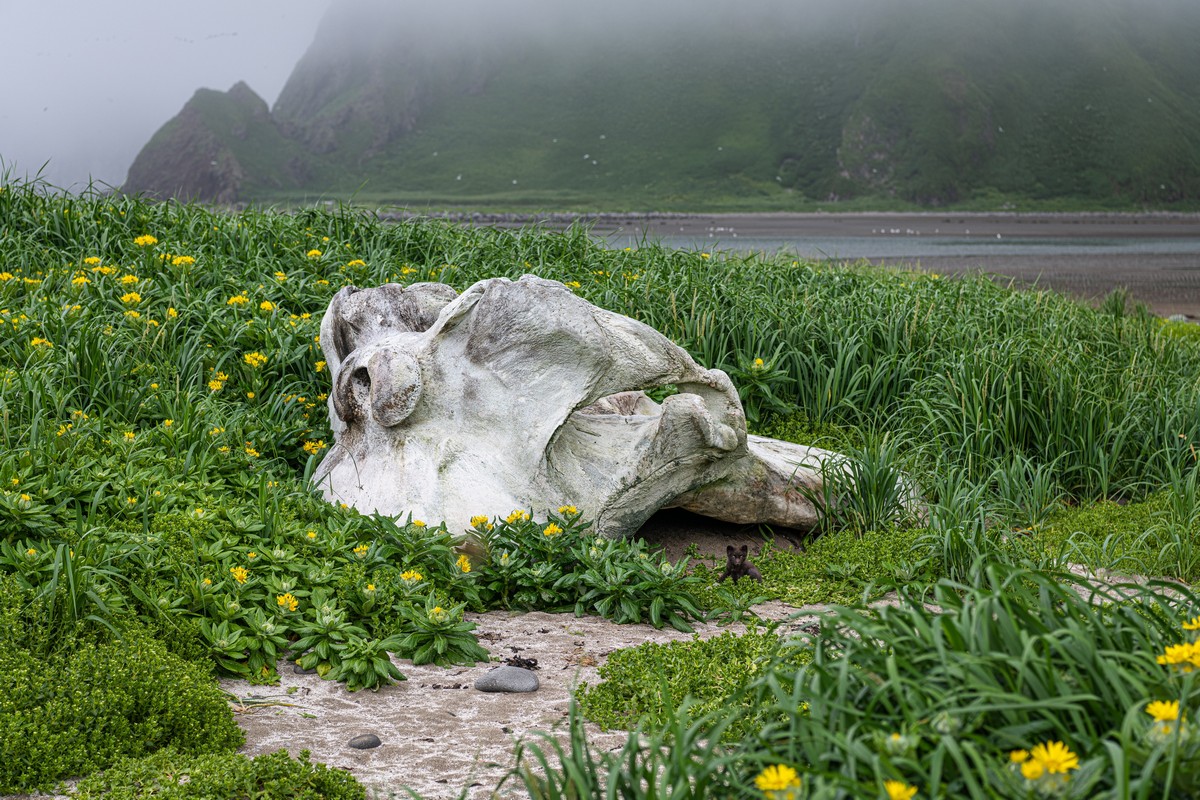 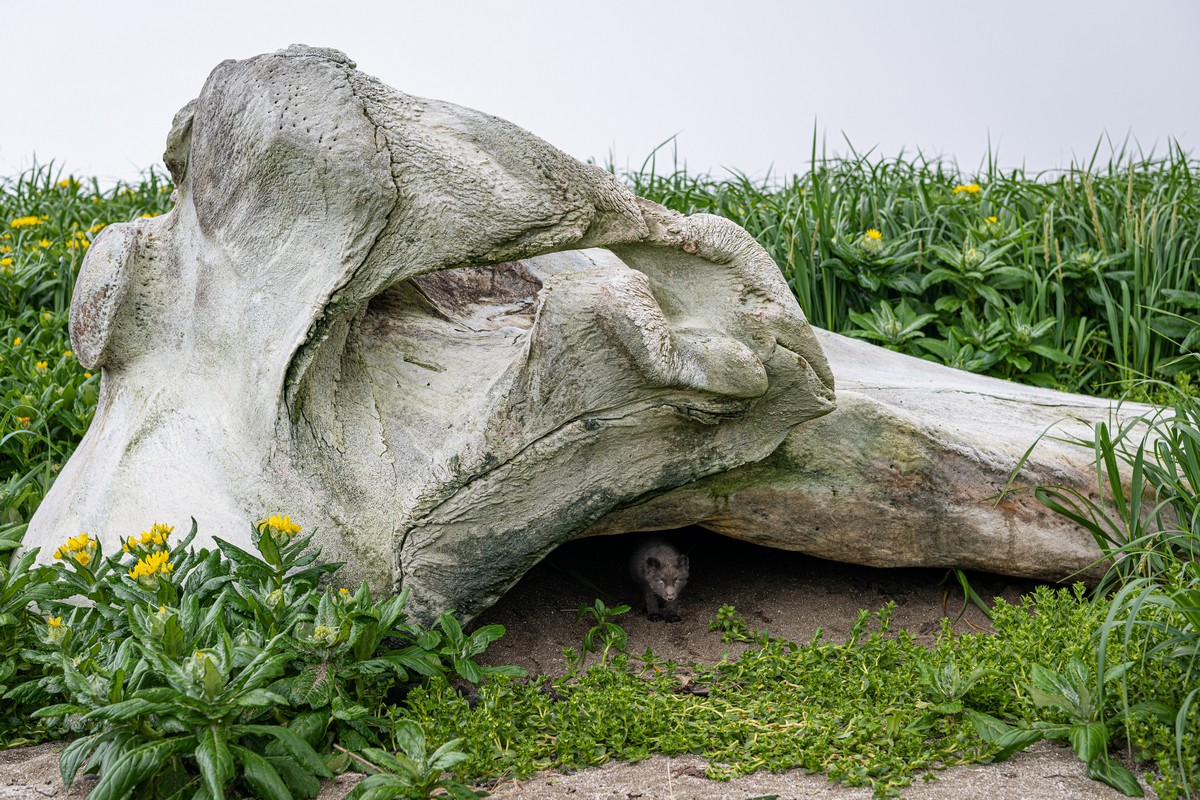 Here’s the jaw. All the teeth appear to have been pulled; I wonder by whom? ) 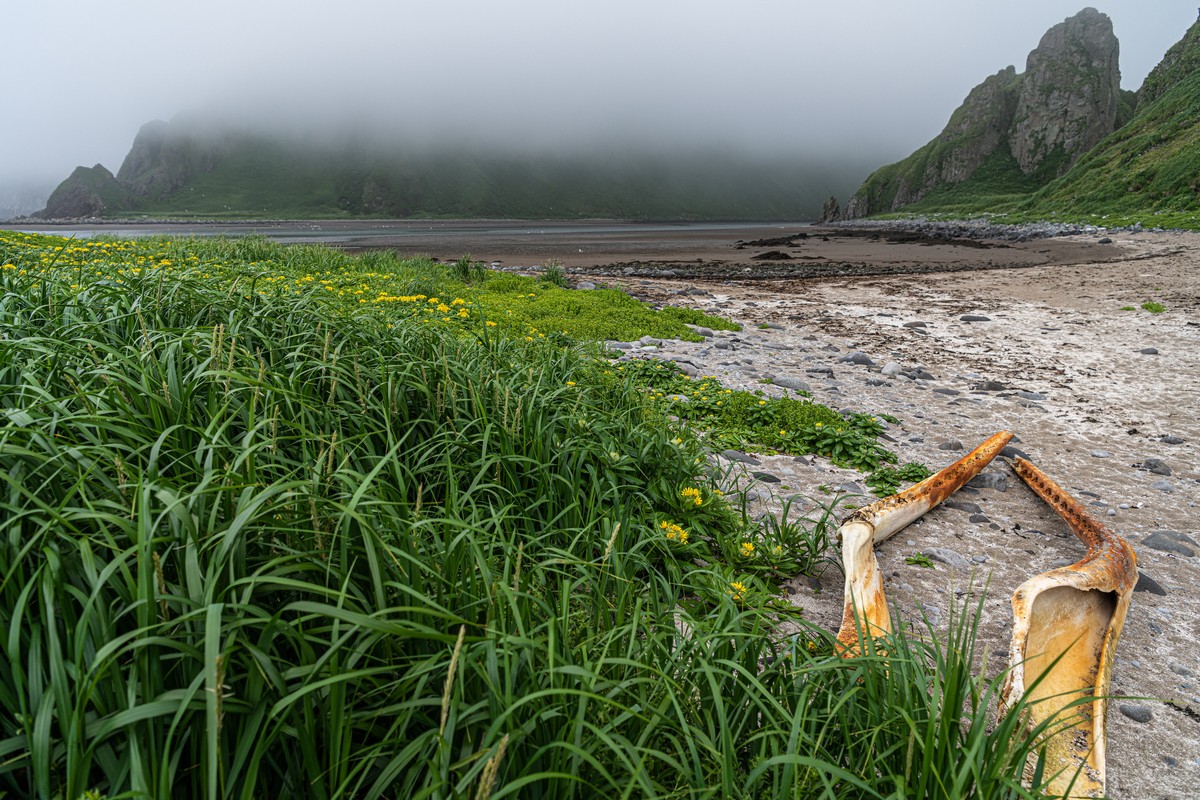 The polar foxes, btw, were apparently shipped in here from either Japan (but from where exactly isn’t clear) or Russia (from Medny Island, one of the Commander Islands). 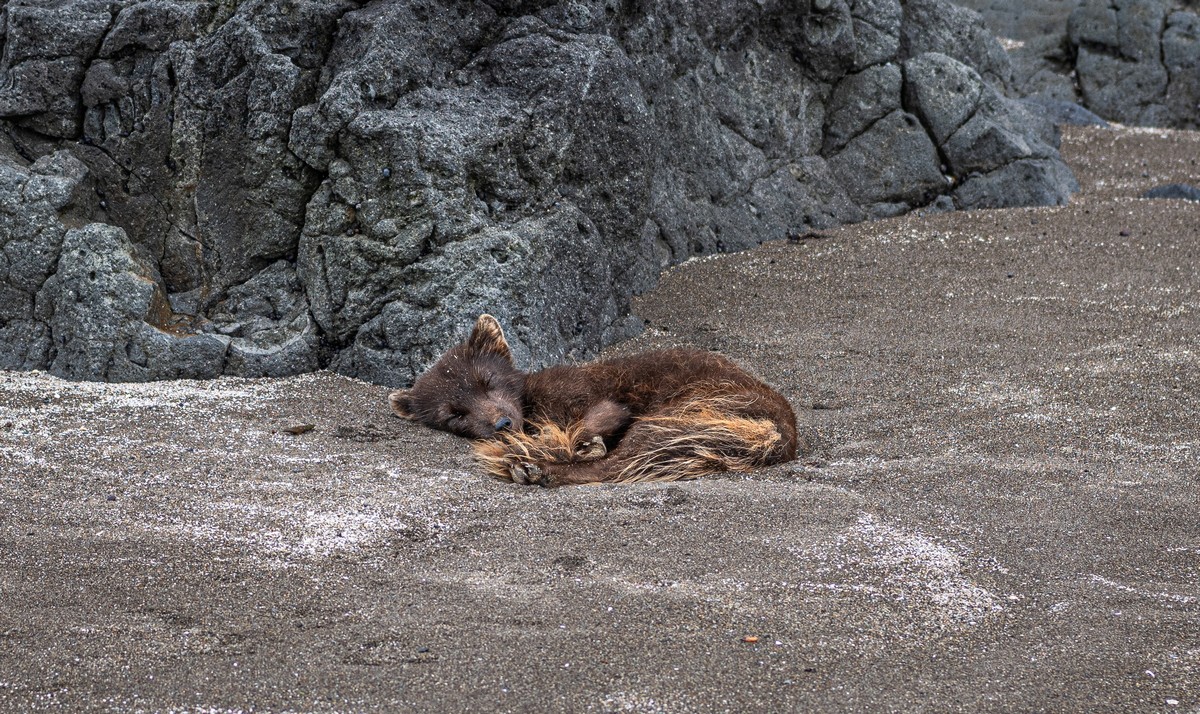 The polar foxes see humans very rarely, and no one hunts them; accordingly they’re… cheeky and curious!

The captain informed us that the weather wouldn’t be getting any better: the wind from the south (yes – with its relatively warm air from Japan) was on its way, and that meant things were gonna get rough weather-wise very soon. Time to get out of there. Ouch. We got out of there (.

Farewell Ushishir; hope to see you again in your fullest glory one day!…