Onward – and further down toward the southern end of Kamchatka… 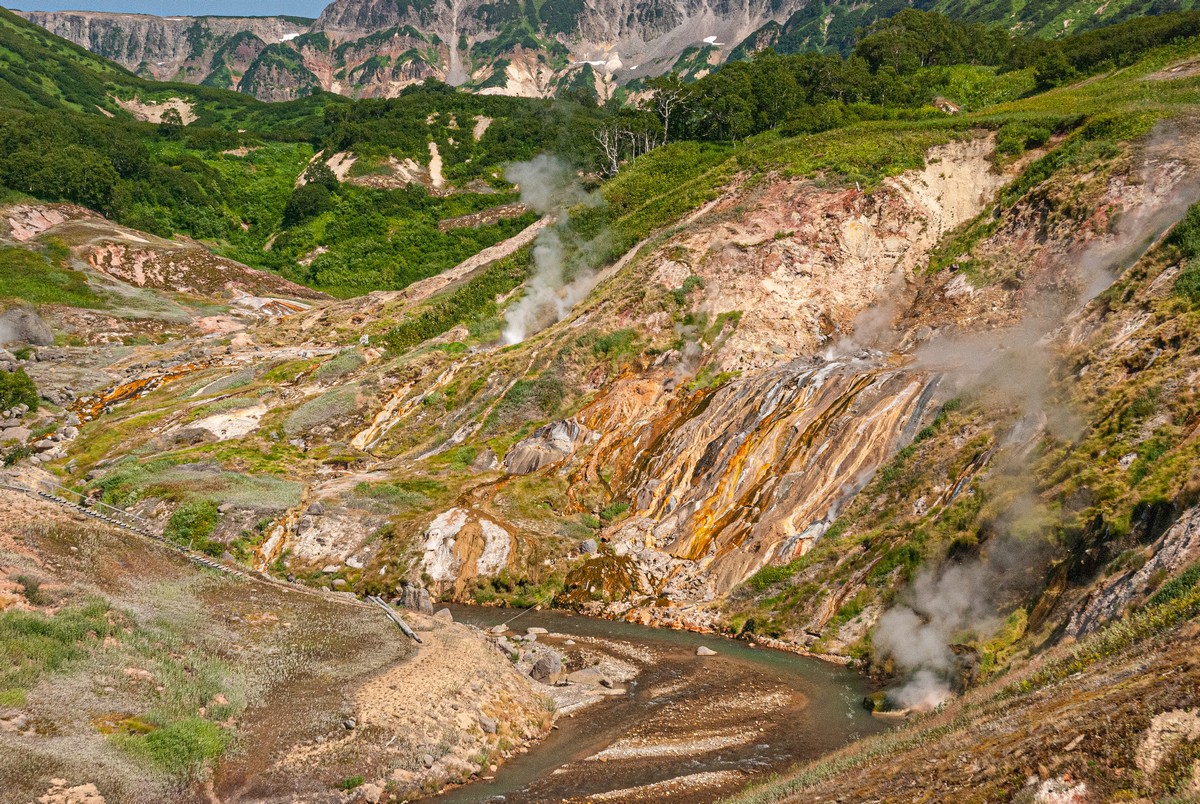 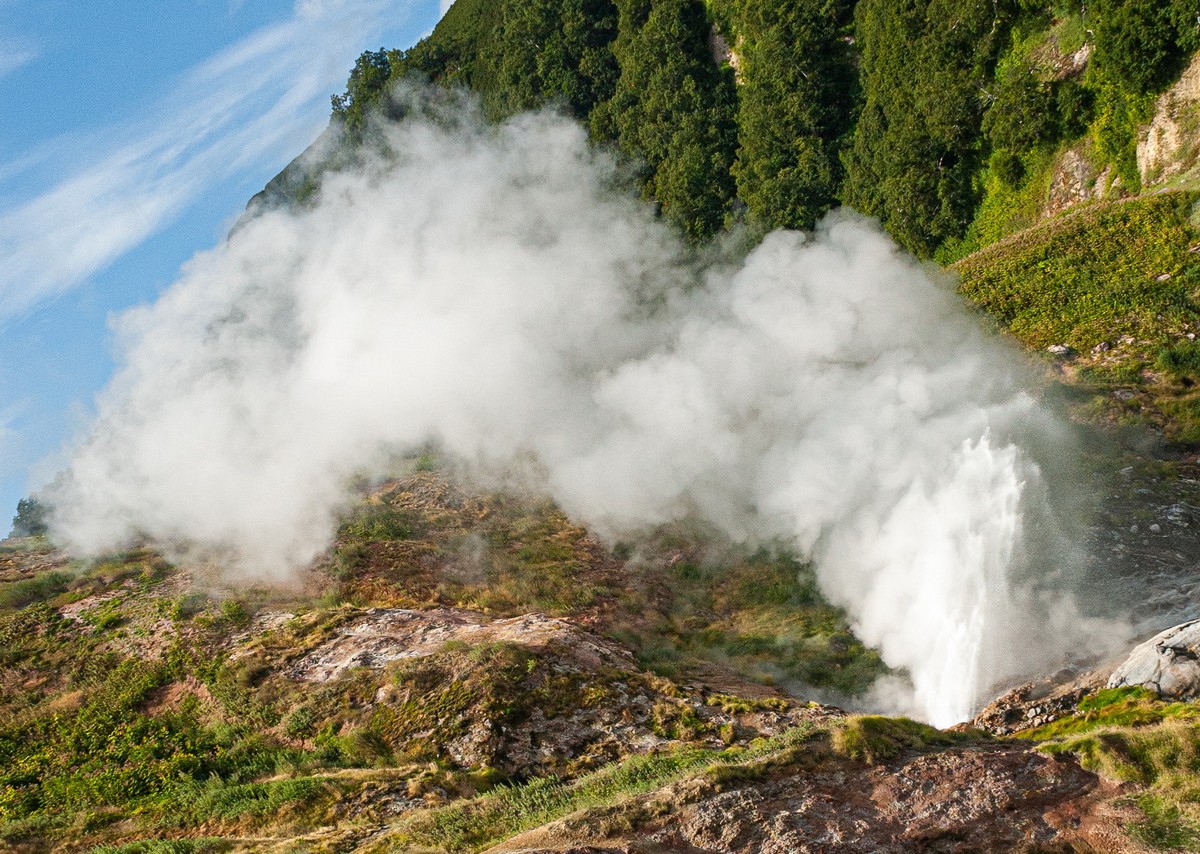 First – a question to those of you, dear readers, who’ve been to VG yourselves – especially those who’ve been more than once: what’s not right in the photo below? 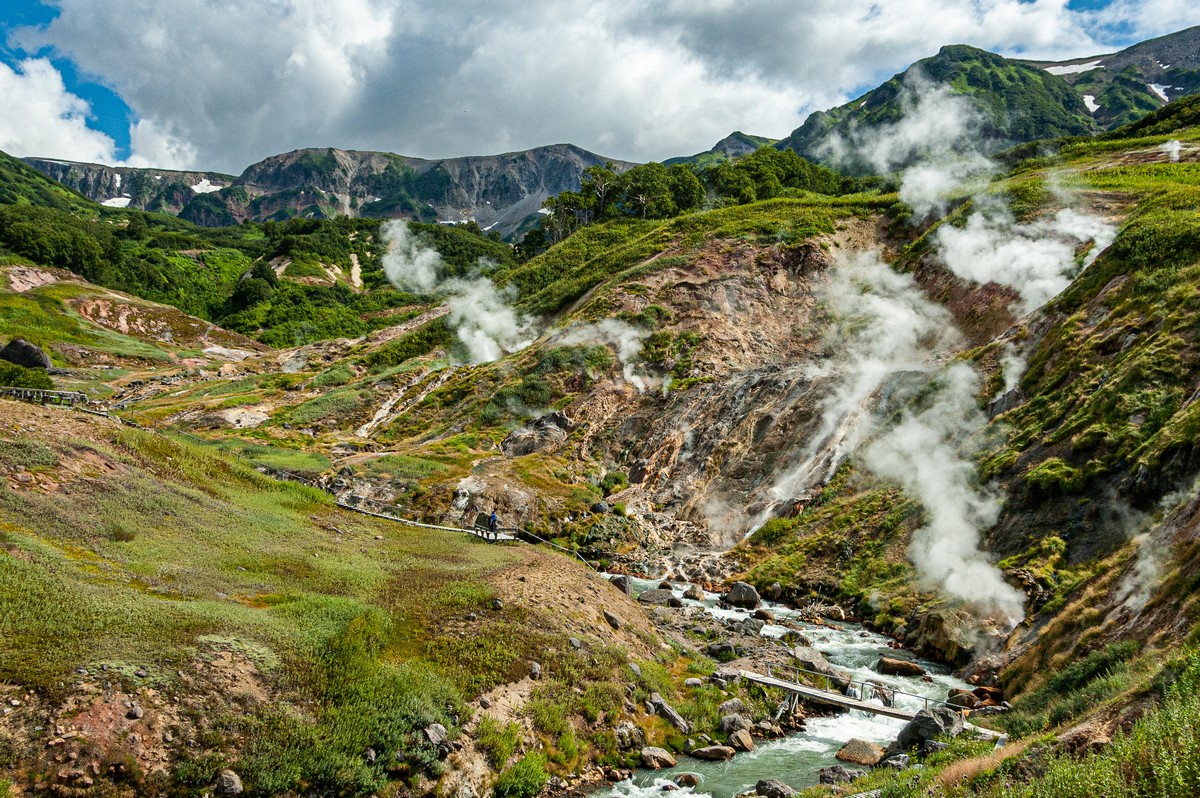 I’ve said I won’t go into banalities about VG, but I will at least share with you a few mandatory – and not always obvious – truths about the place… 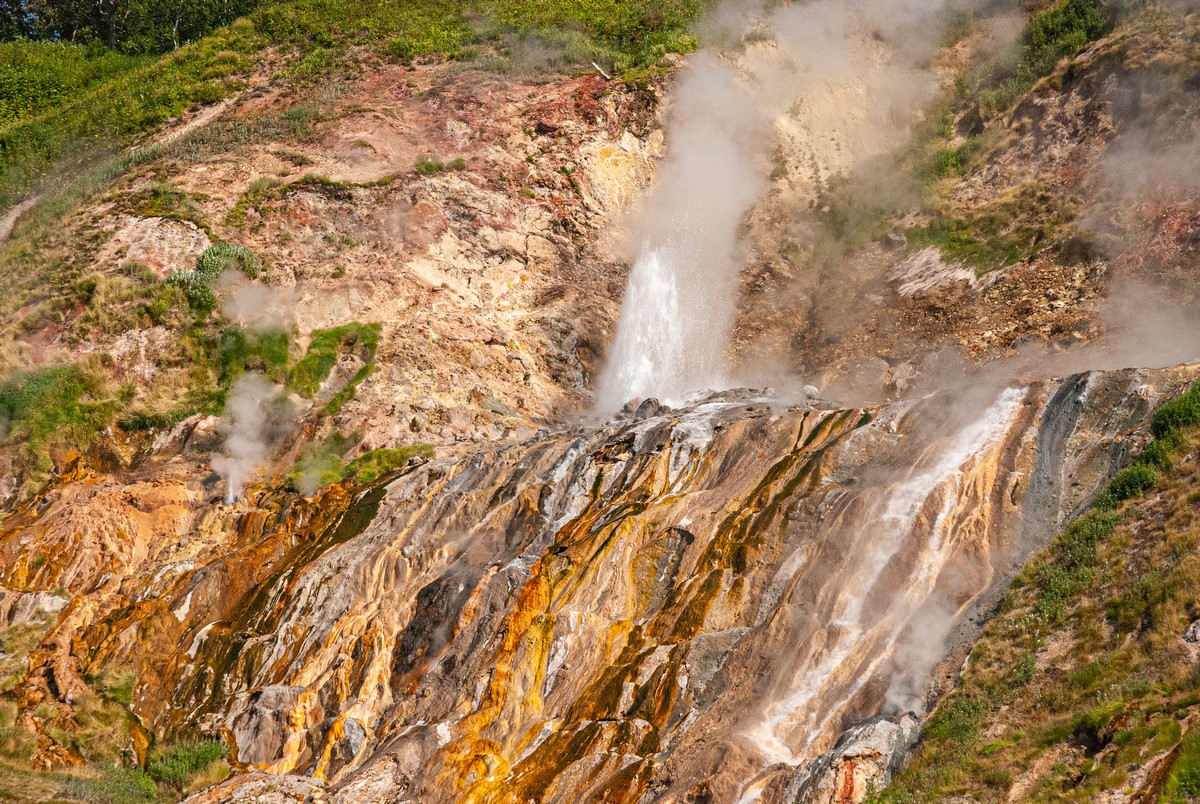 Probably the most curious and unexpected surprise to those new to VG is the fact that it was discovered only in… 1941! Yes – just 80 years ago. Which just goes to show how untouched-by-man Kamchatka is: this whole valley, never visited by Homo sapiens – ever – until 1941. Soviet geologist Tatiana Ustinova discovered it, with the help of local Itelmen Anysyfor Krupenin. Yes – meaning that even the indigenous population didn’t know about VG either! But that’s easilty explained…

Natives have always tended to live near the coast, while VG is a good way inland. They’d walk further from the ocean at times – but only up valleys along rivers, for the fish. But VG? What with the full periodic table of elements and their compounds being present in high concentrations in the water there, plus downstream therefrom: not a single fish. So, the Itelmens, eons ago, probably did once walk up toward VG, but seeing how naturally polluted and fishless the river was leading to it, they simply gave it up as a bad job! 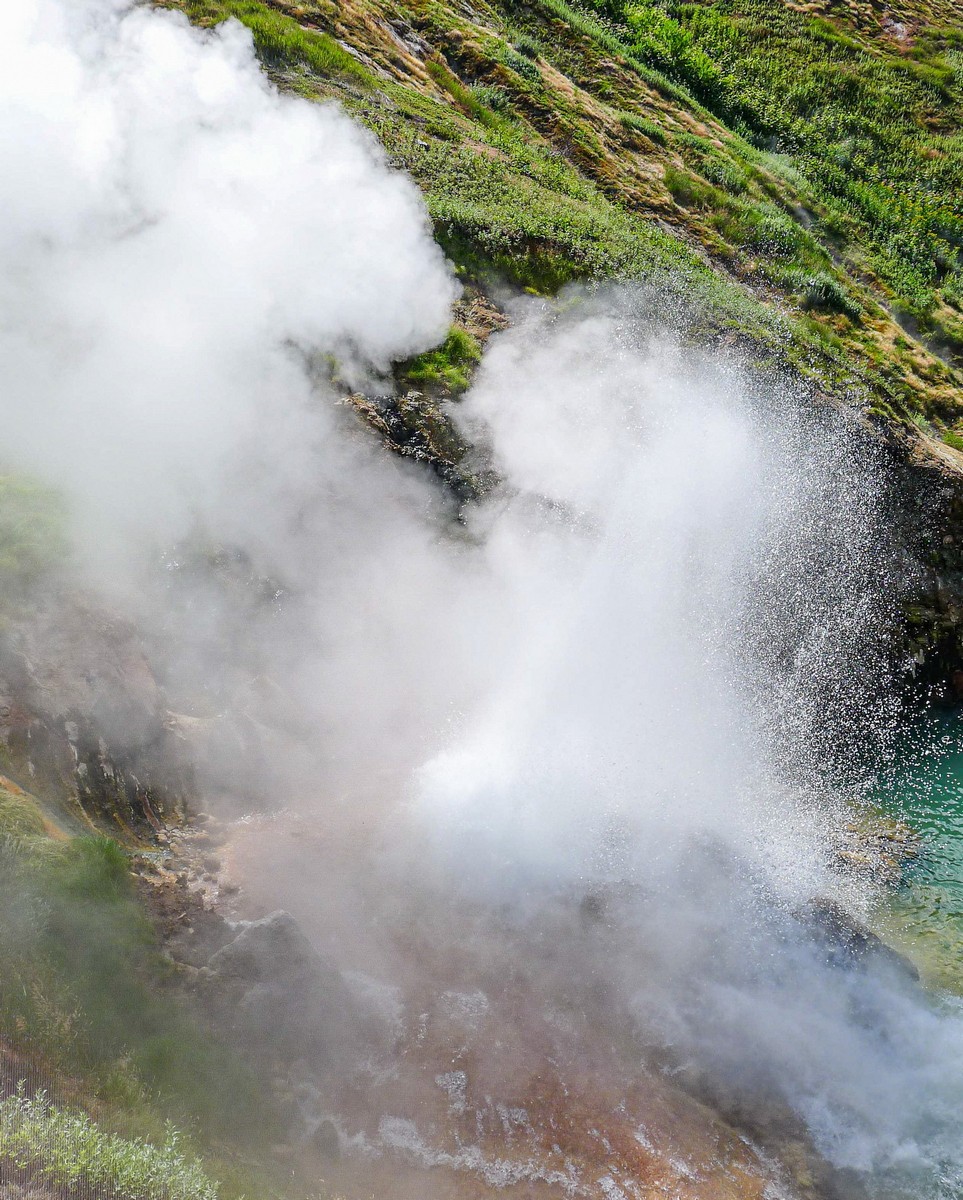 More fun (not banal!) VG sights and sounds: don’t think a Valley of Geysers is only about hot water and steam. It’s about volcanism too. There are the Devil’s Eyes (or are they the Gates of Hell?): 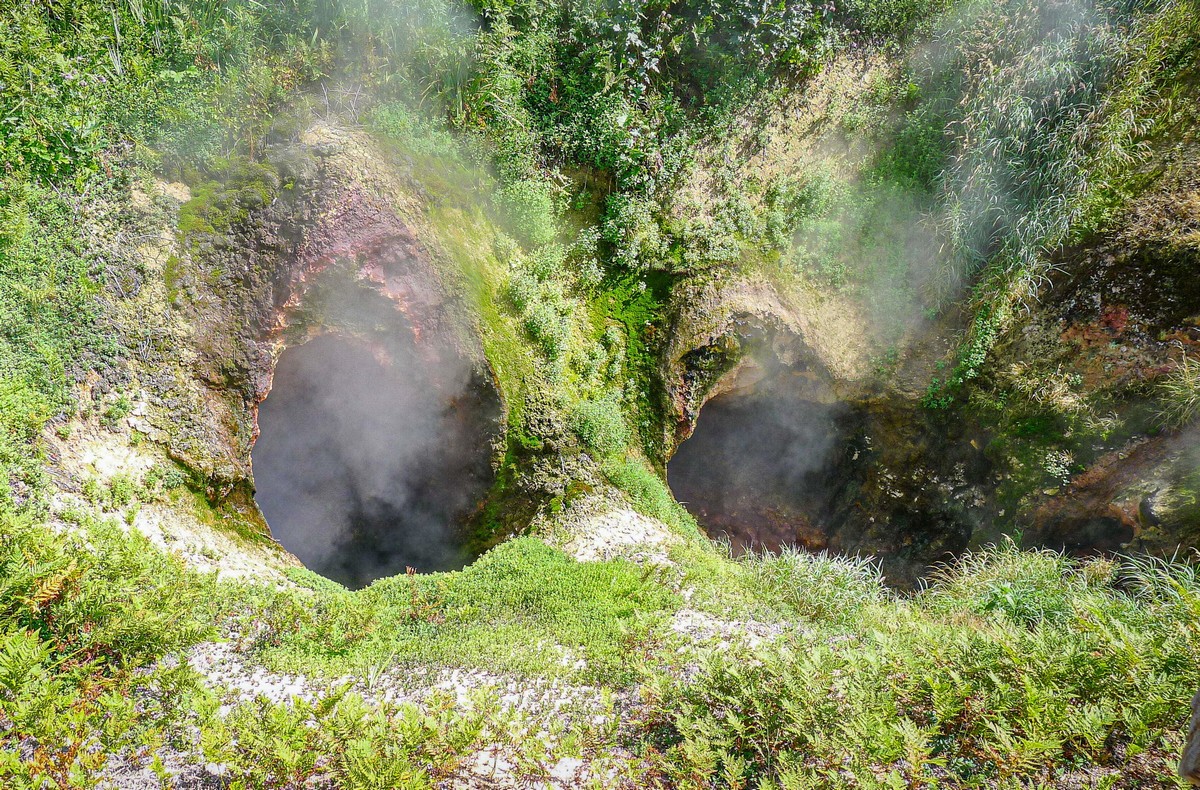 And there’s the unique thermal phenomenon known charmingly as… the Toilet! After boiling and spitting water, it sucks the water back into itself with a gurgling sound – much like a W.C.! 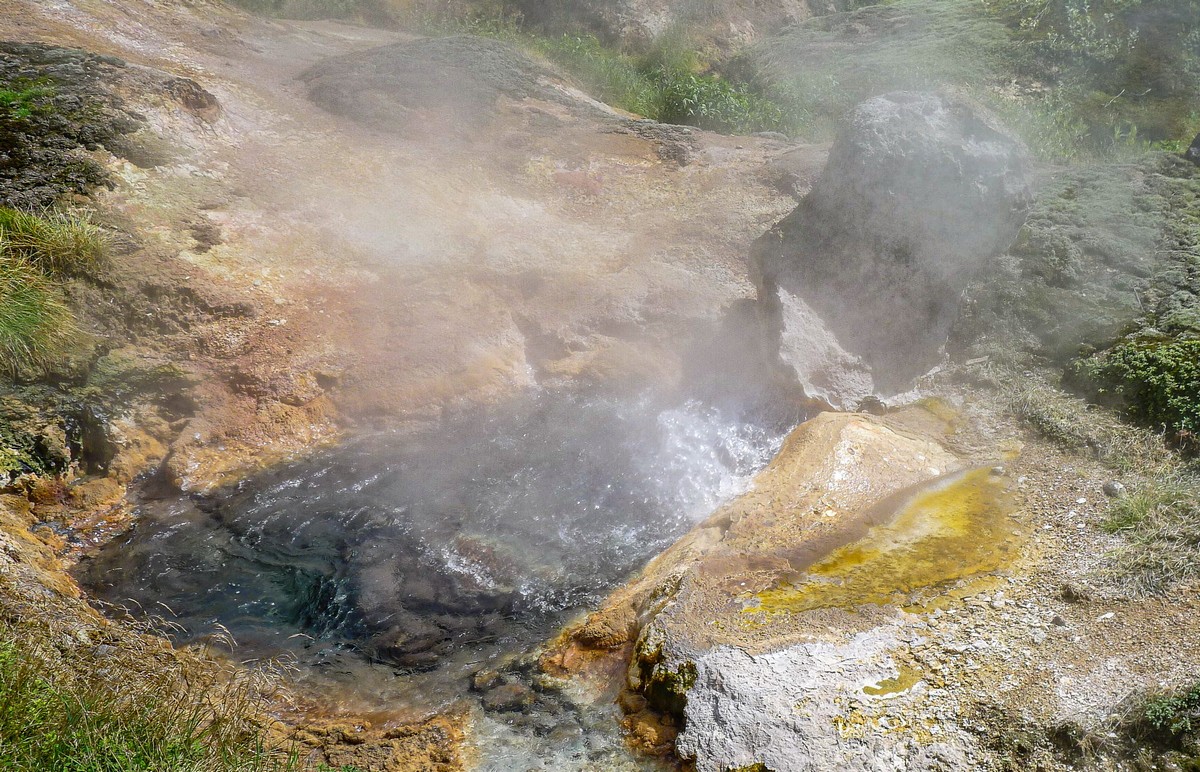 Bubbling mud baths – of which there are several: 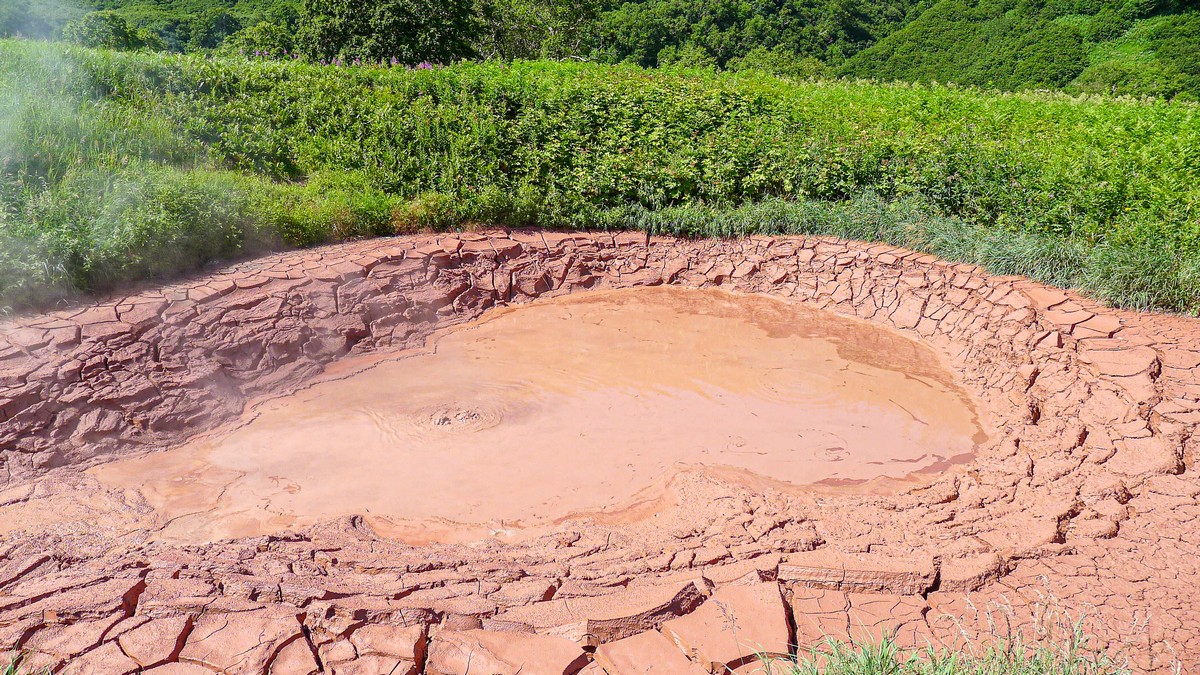 Once it had been discovered, Soviet tourists started visiting VG (helicopter rides to VG began later, in the early 90s) – but never too many tourists, so as not to make a mess of the place. Prudent Soviets.

Elevated wooden paths have been installed along the most interesting stretches of the valley and next to the most outstanding geysers, and there is was (see below) a handy footbridge across the stream:

Now – about that bridge… Let’s rewind back to my question at the beginning of this post… What’s not right in the photo?

Answer: the bridge – it’s there! But it’s not there today! All these pics were taken way back in 2006! 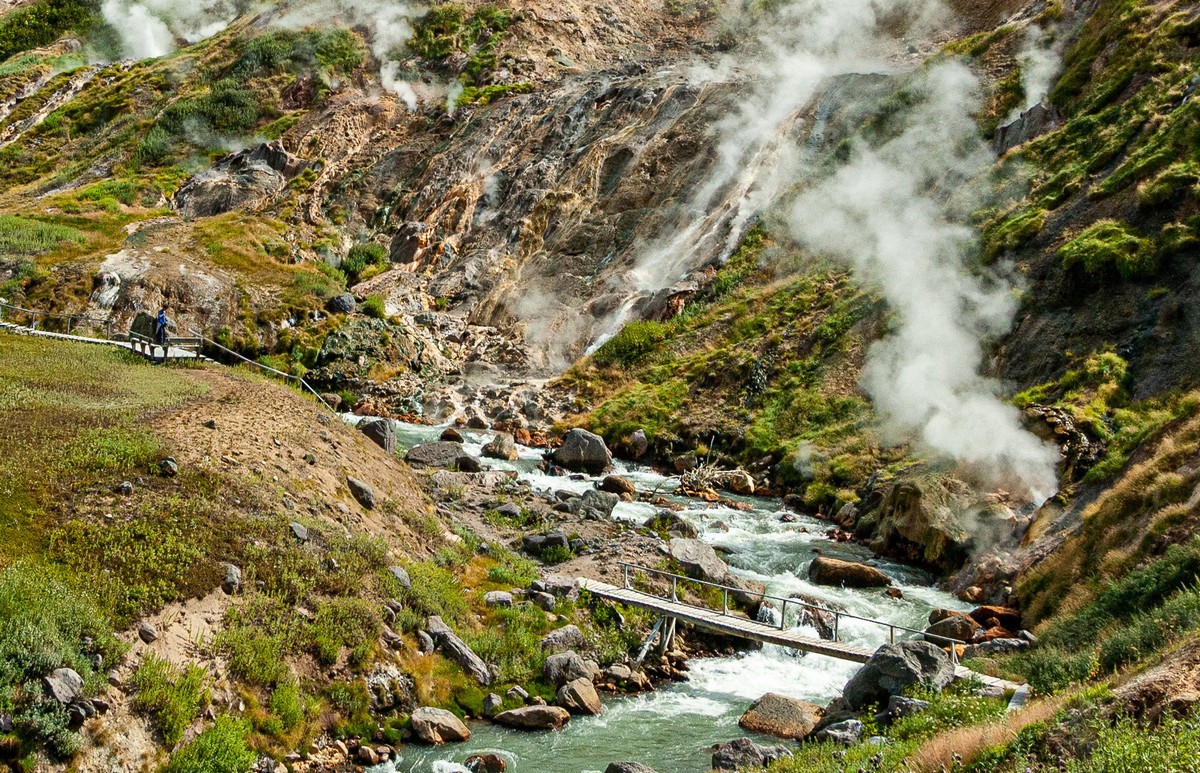 In June 2007 there was a massive mudflow, which ‘inundated two thirds of the valley’: 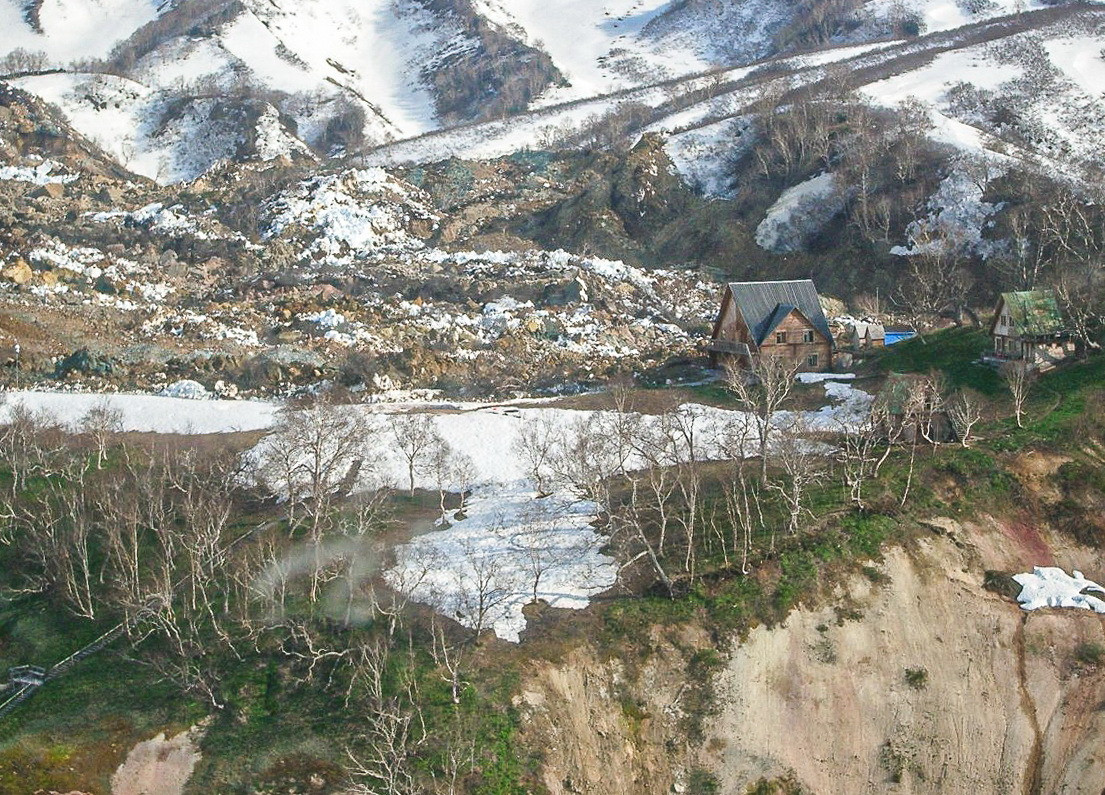 A big chunk of mountainside, as if sliced by a knife, split off the main massif, causing a huge landslide, which covered up most of the geysers and springs, and bunged up the stream:

A lake started to form, also knocking out many geysers:

Amazingly, the buildings in the Valley weren’t touched: the mudflow stopped just meters from them! ->

Mercifully, the critical infrastructure was left intact too :) -> 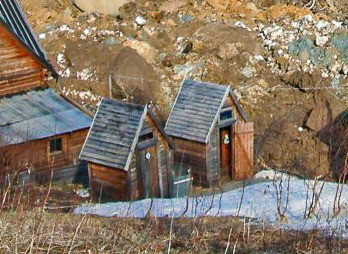 I remember well the howls of horror on the net and in the press: how this was a total tragedy, an immitigable loss, with everything destroyed/dead, etc., etc. However, I also recall thinking straight away how earthquakes (!), volcanic eruptions (!), and massive mudflows (!) – they’re all regular occurrences in this part of the world. Of course, they change the natural landscapes – but they don’t destroy them. And sooner or later the geysers will push up to the surface, the streams will bore through the mud dam, and everything will be back to how it was – albeit looking somewhat different. That’s just how it is… 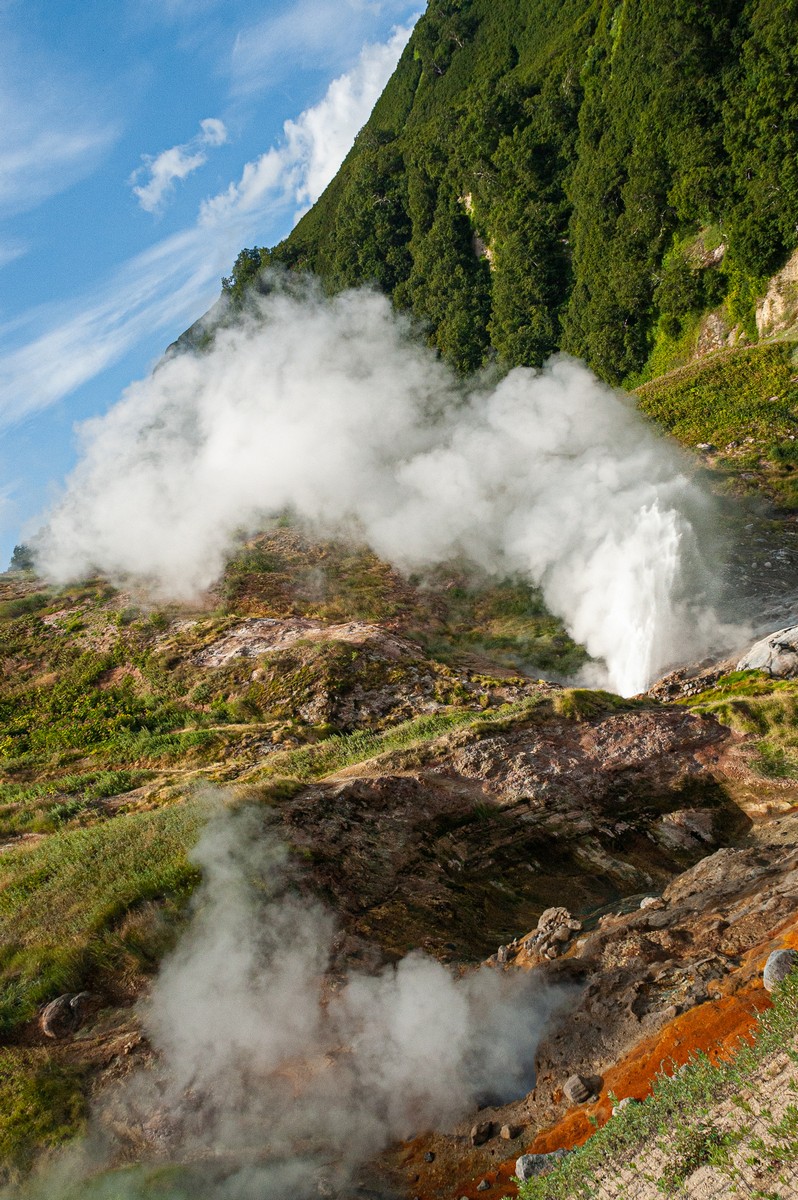 The photos above of the Valley after the mudflow aren’t mine; they were sent me by some Kamchatkan locals I know well. I’d only gotten a look for myself the following year – in 2008. So what can I say? Actually – rather impressive! For this here lake had formed. Also, if you can make them out, you can see how most of the paths are still intact, but the bridge – gone: 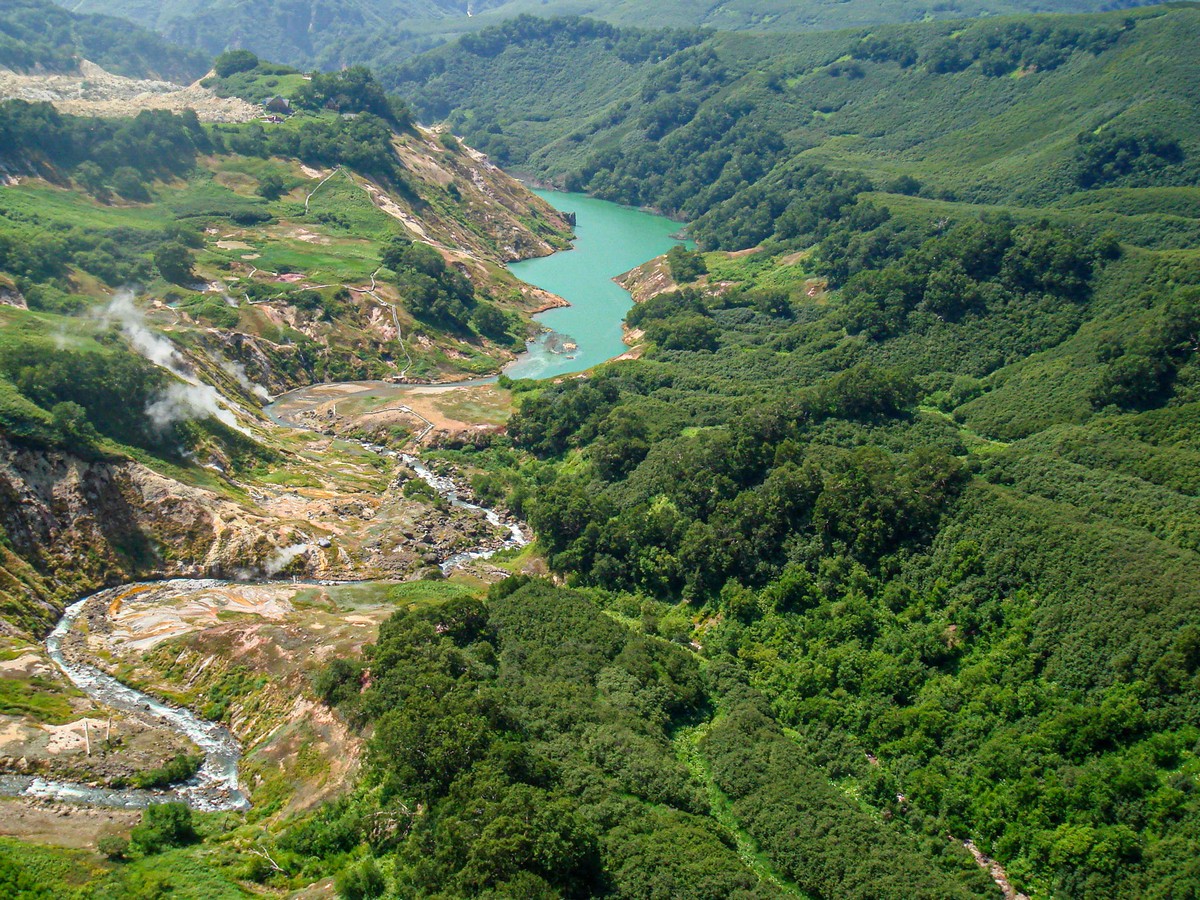 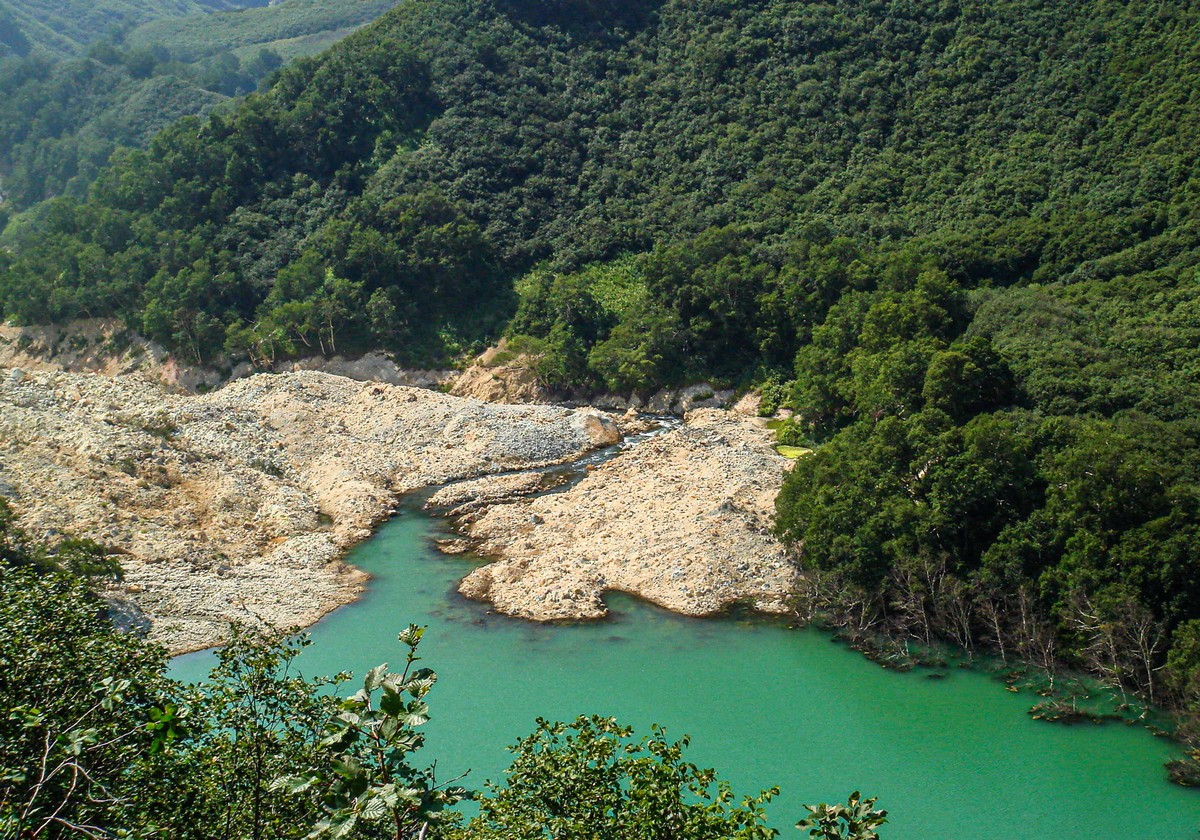 Such a nice juicy lime color to the water! -> 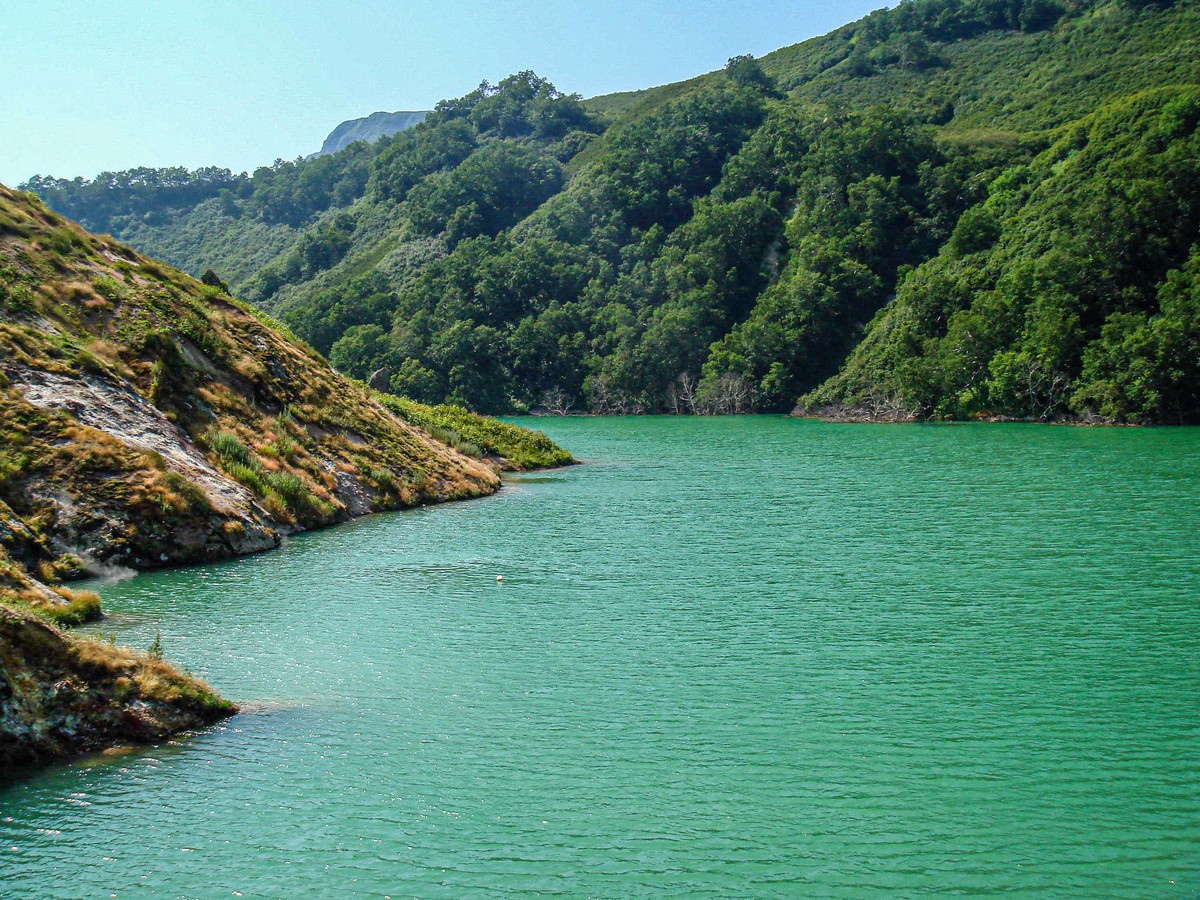 The folks who were here when the mudflow occurred were soooo lucky! Apparently, the tourists down below didn’t notice a thing (until they opened the door:), and the helicopter was in situ on its pad! 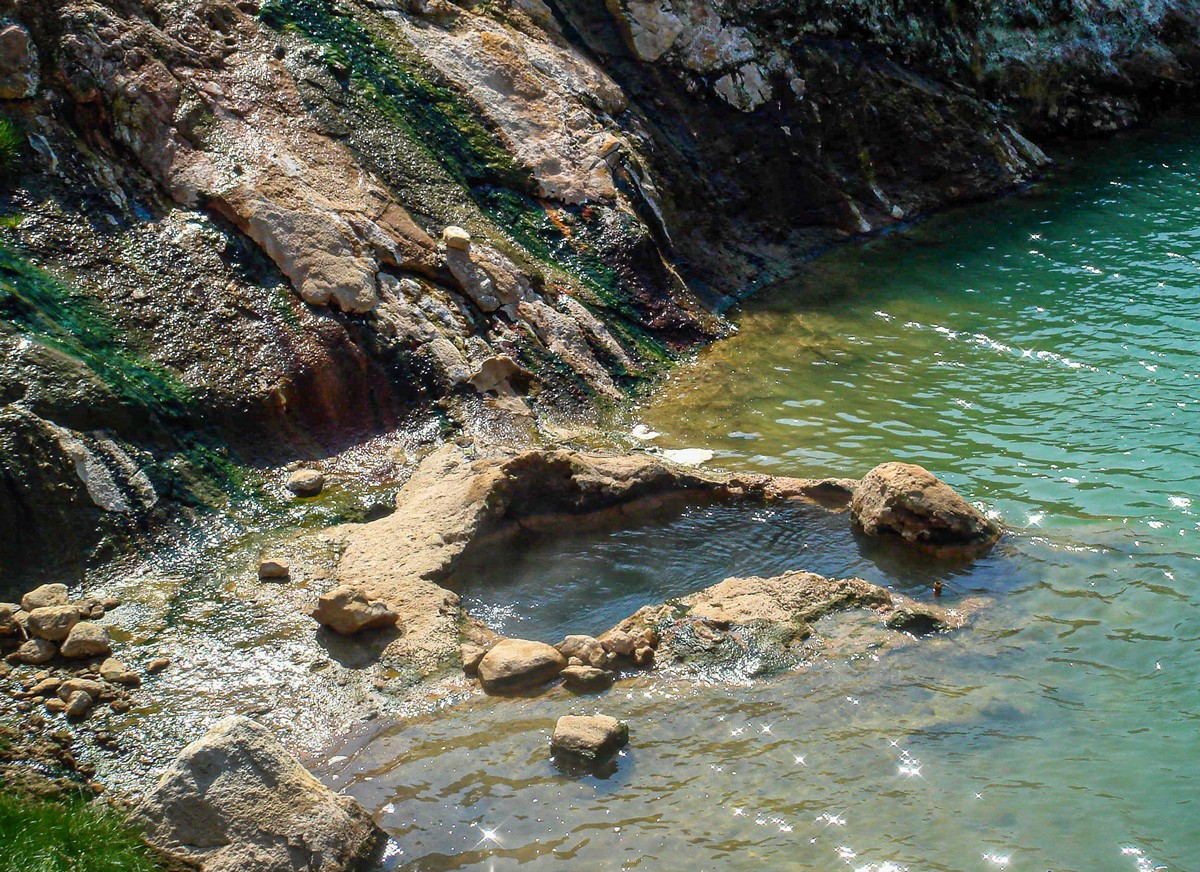 Other geysers are doing just fine! ->

In the summer of 2010 I first saw water spurt up some 30 meters from the Velikan (giant) geyser for around eight hours intermittently: 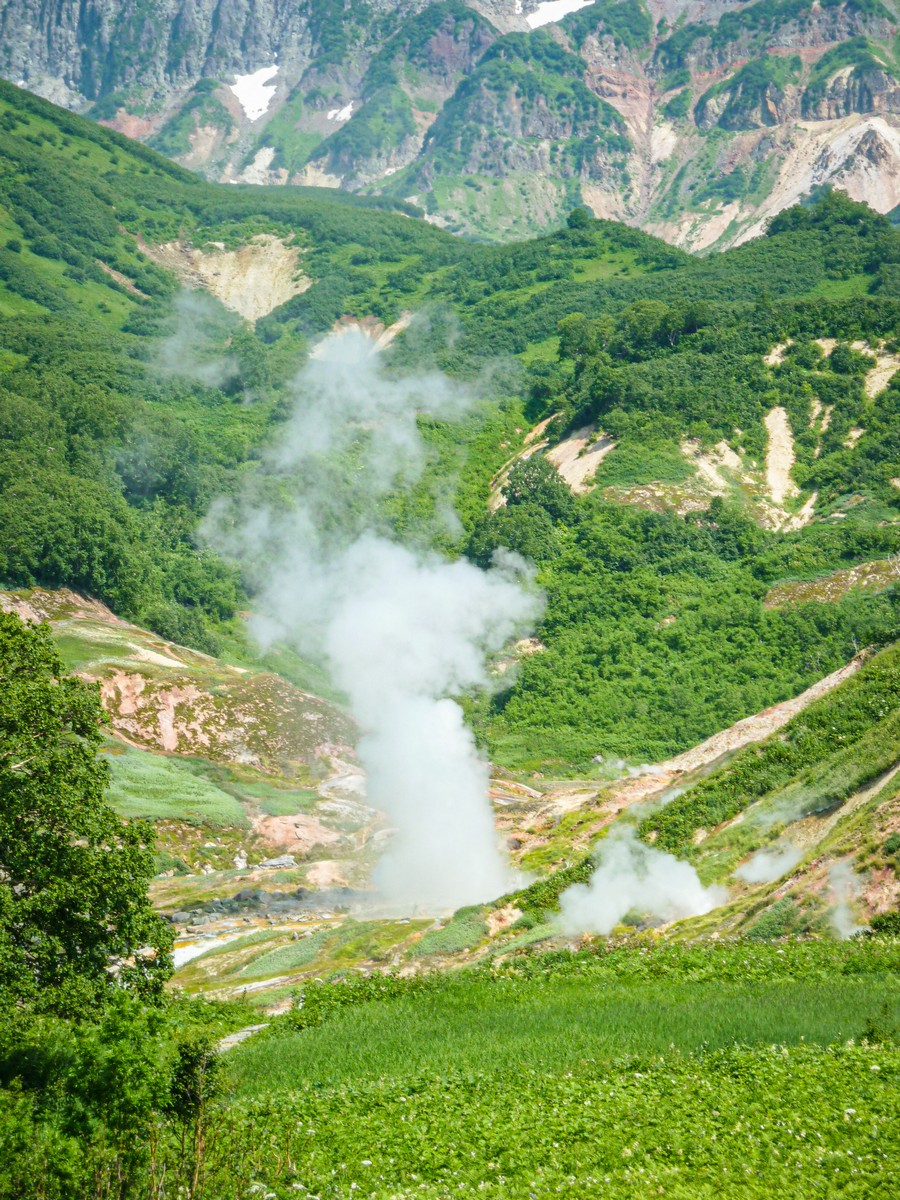 In 2012… (yes, I have been to VG plenty of times:), that is – five years after the mudflow, the picture started to get its old mojo back: upon the mud – grass and assorted other greens, while the level of the lake had started to fall: 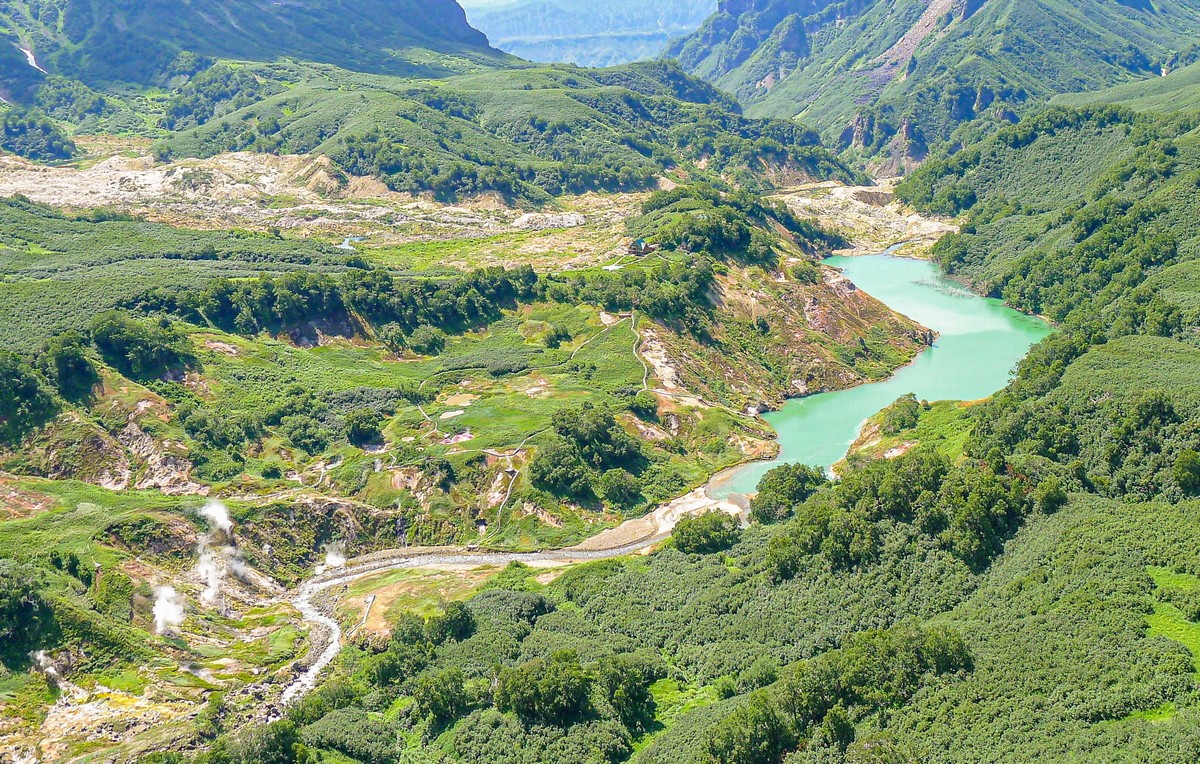 And Bolshoy was back! Emitting piping hot water 30 meters up into the air as before! -> 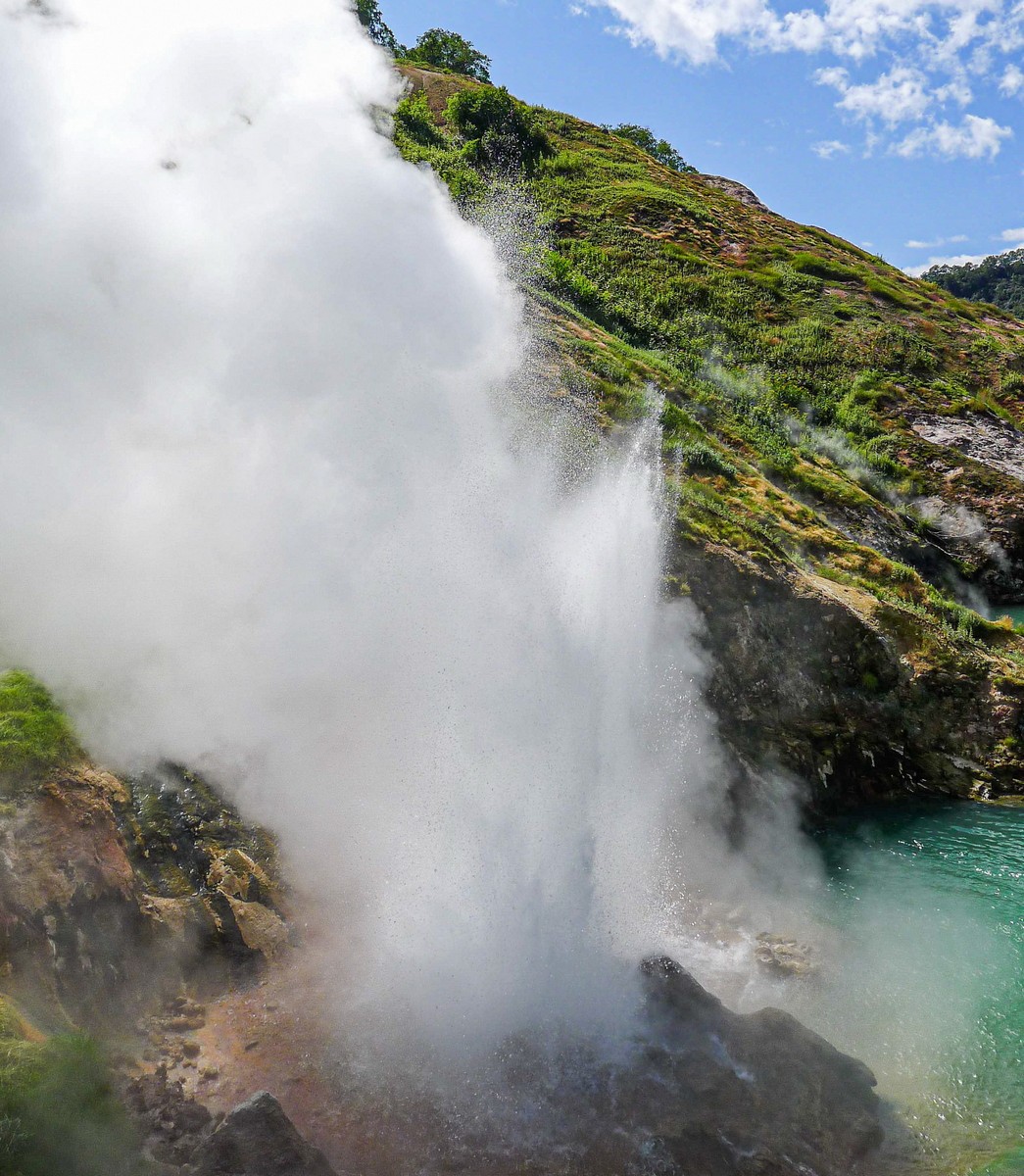 And the rest of the landscape – still as per: dotted with steaming geysers all over the place. Shame they didn’t replace the bridge -> 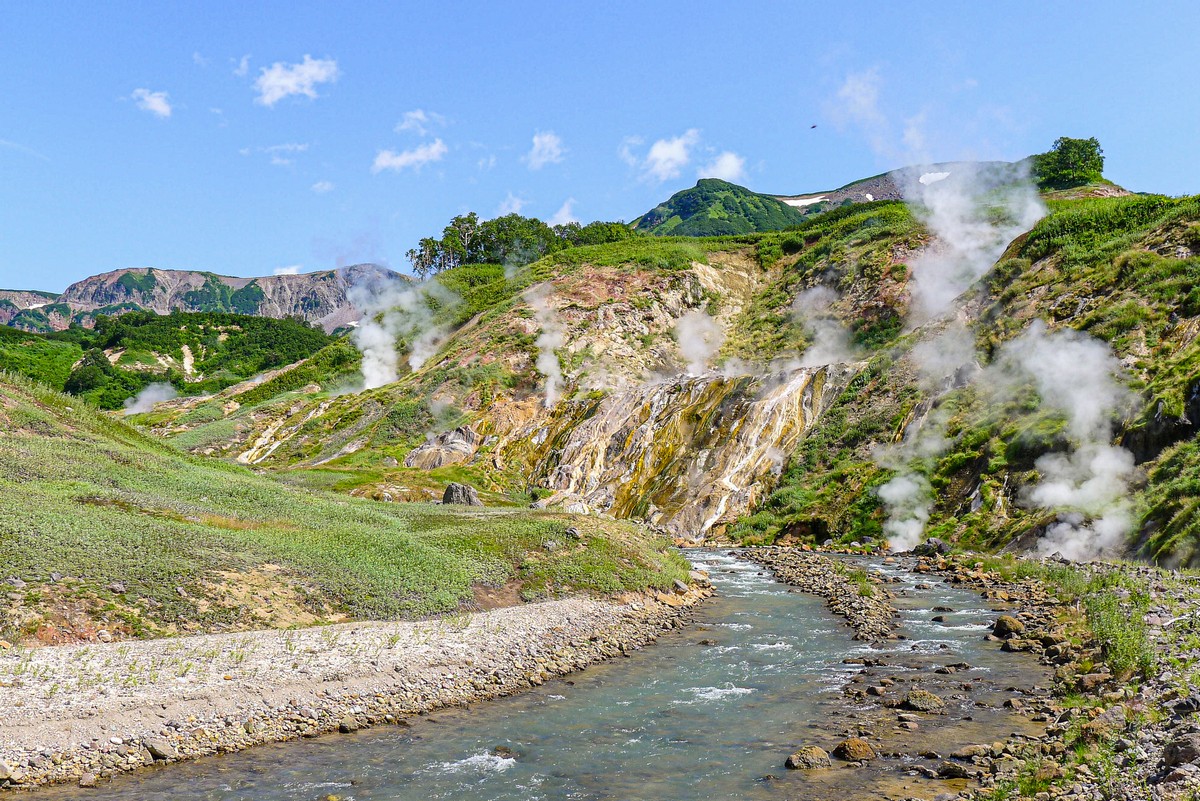 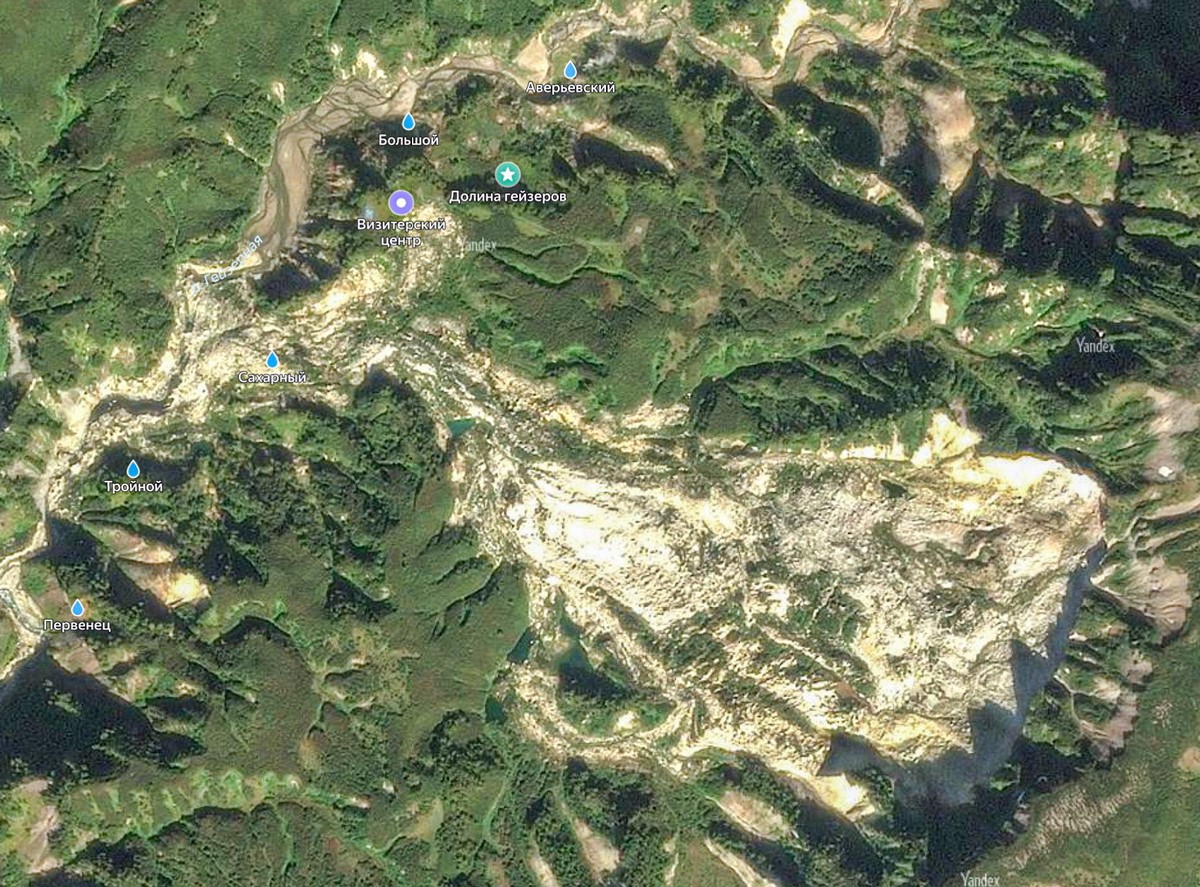 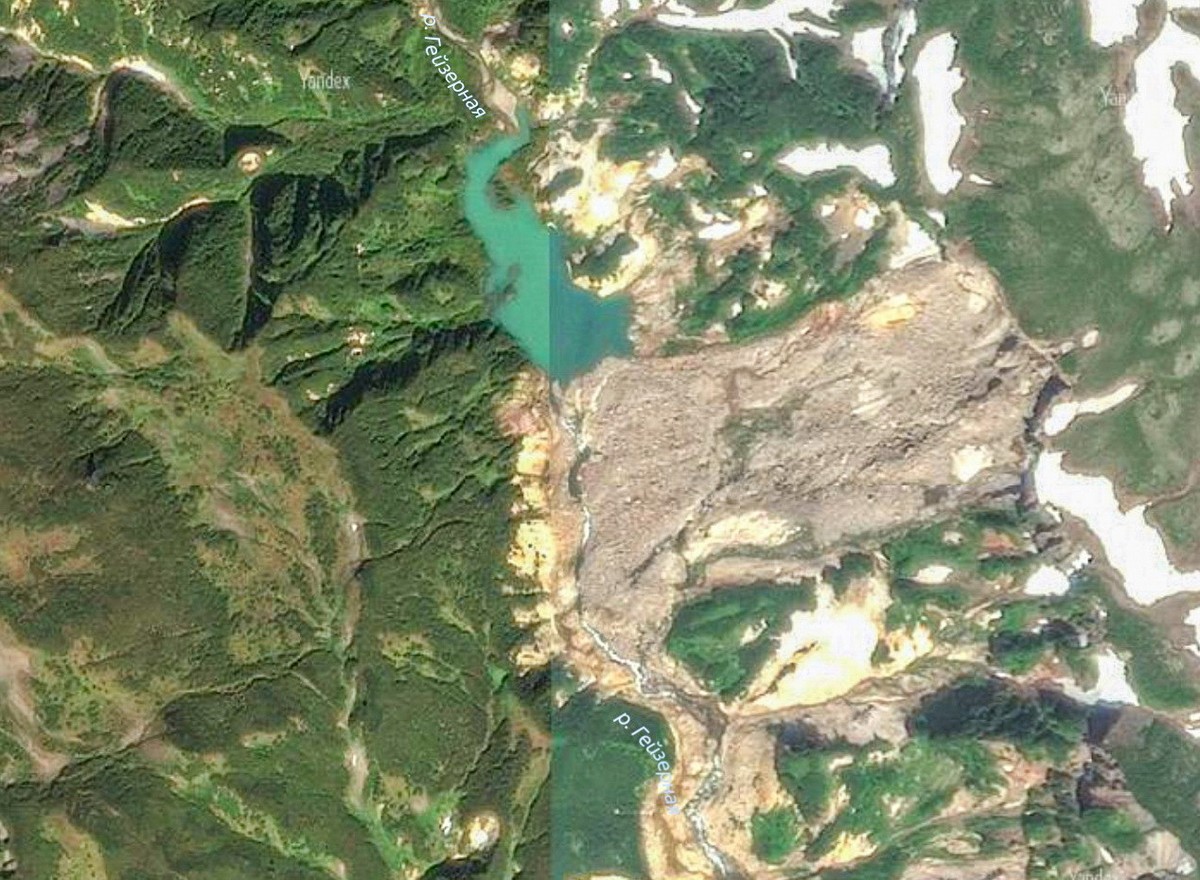 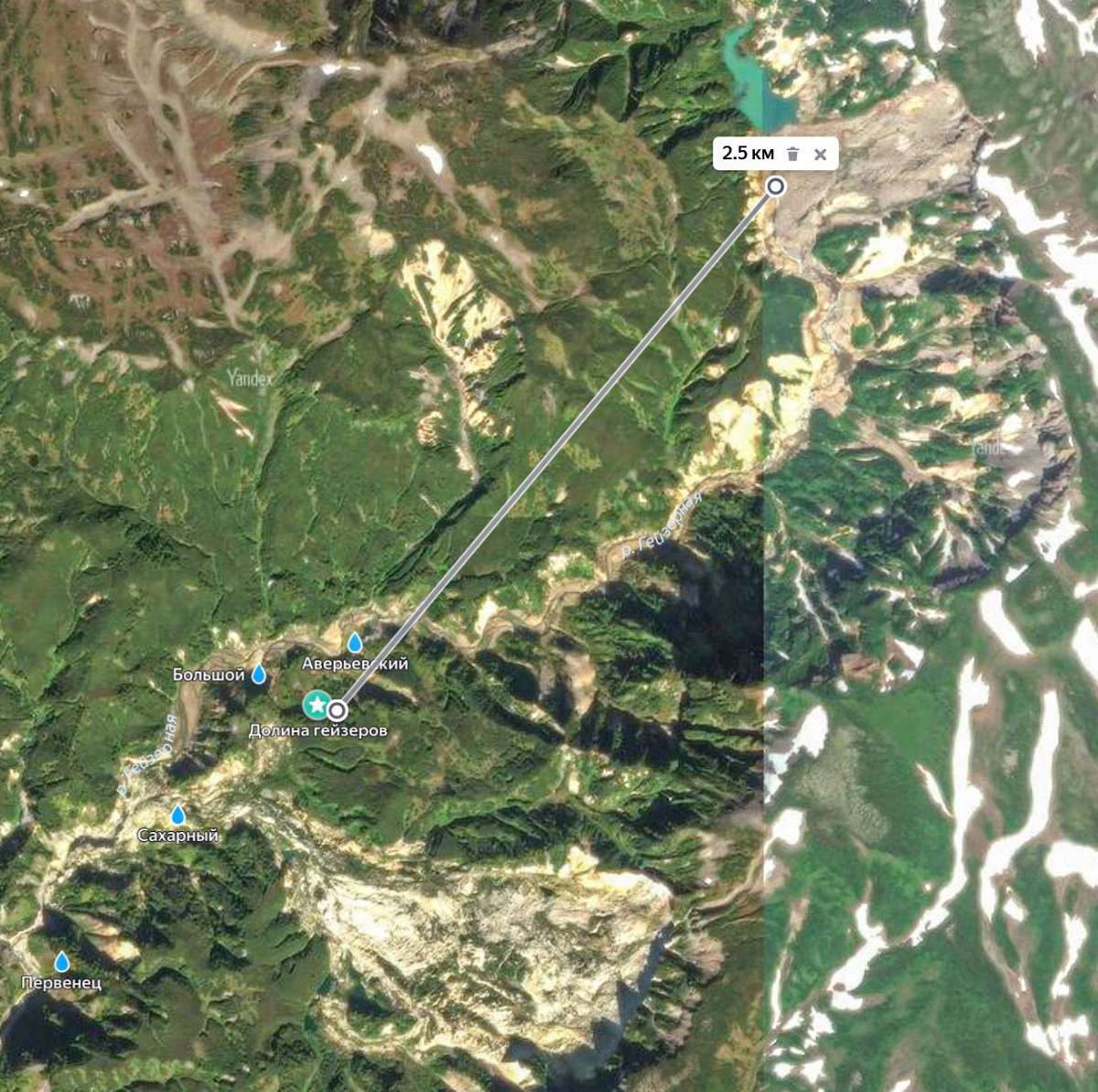 And now, nature is gradually reinstating the status quo: the mud is sprouting vegetation, the lake has fallen in depth, the stream is cutting through, and the covered geysers are reaching up to the surface. Hurray! Here’s the scene in 2021:

However, see those ominous steep cliffs up there – they threaten to give us another mudflow some time in the future… 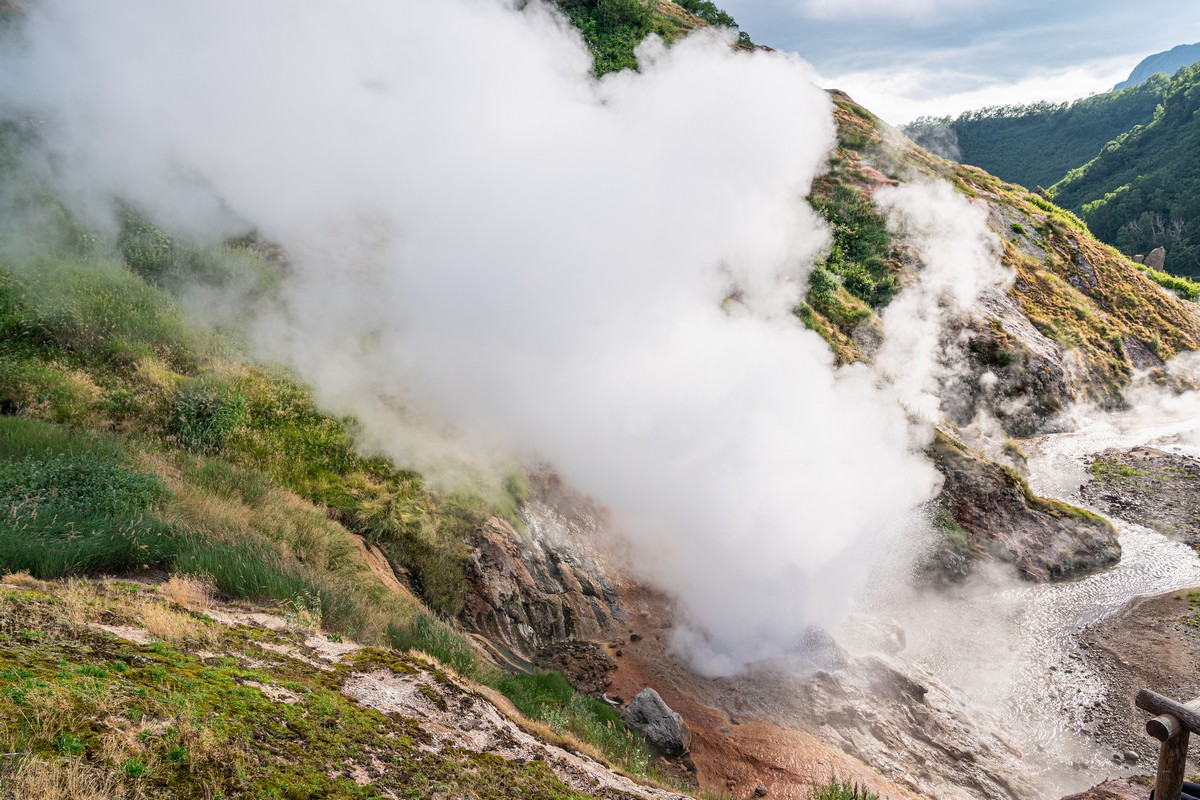 This is where the lake once was. Not so juicy these days… 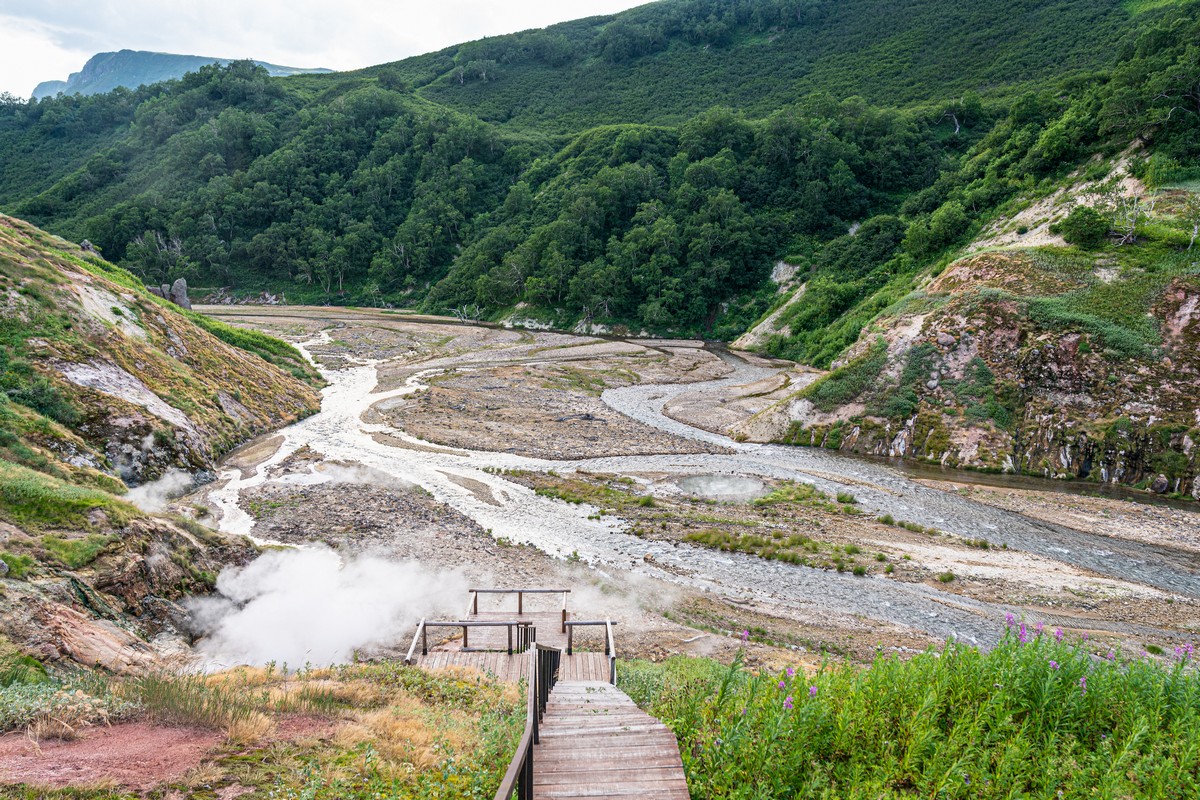 And that was that: time to wrap up. Rather – chopper up…

The rest of the pics from the Kamchatka-2021 expedition are here.