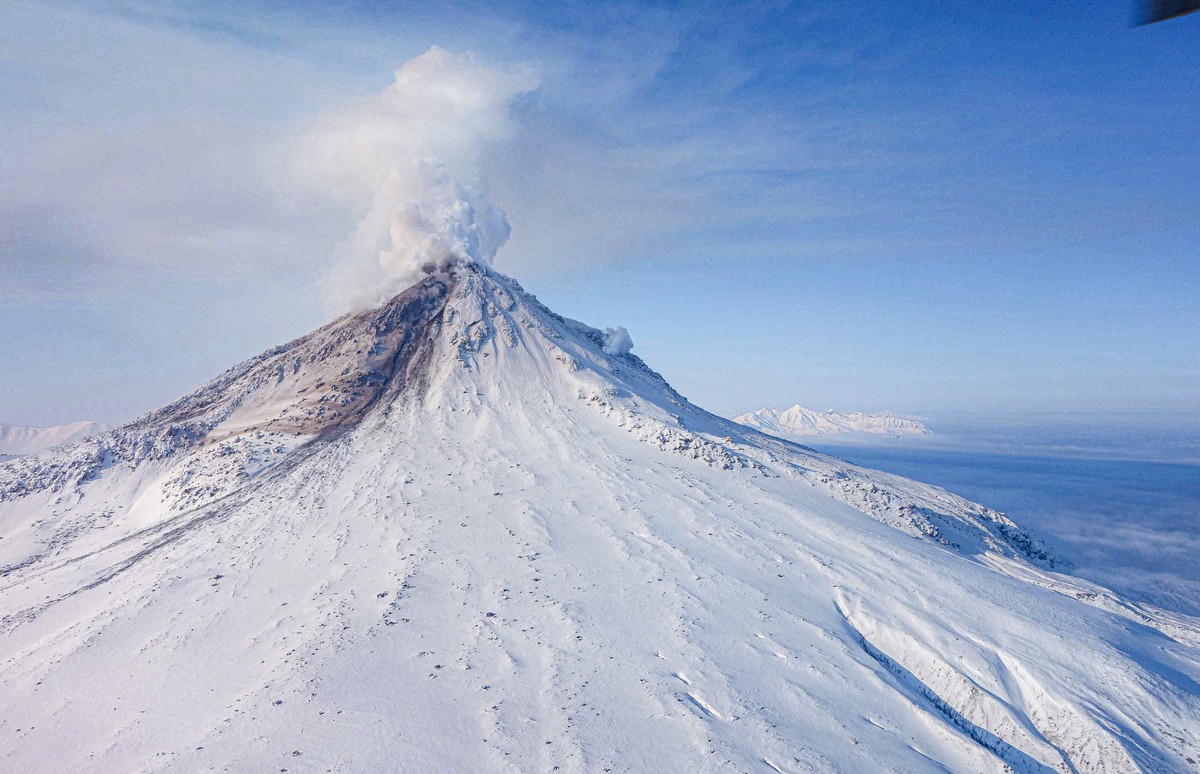 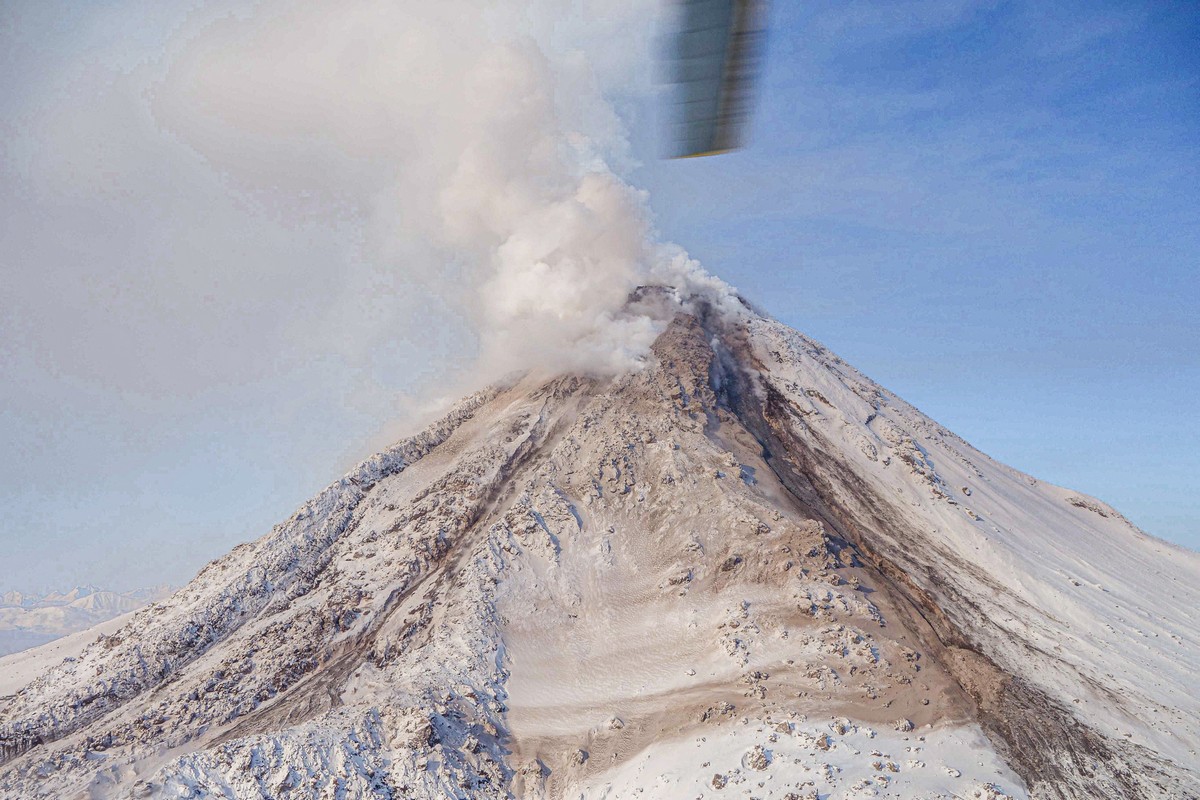 Even in summer (at least, in August of 2012) it’s snowy up top, and almost as forbidding as in winter: 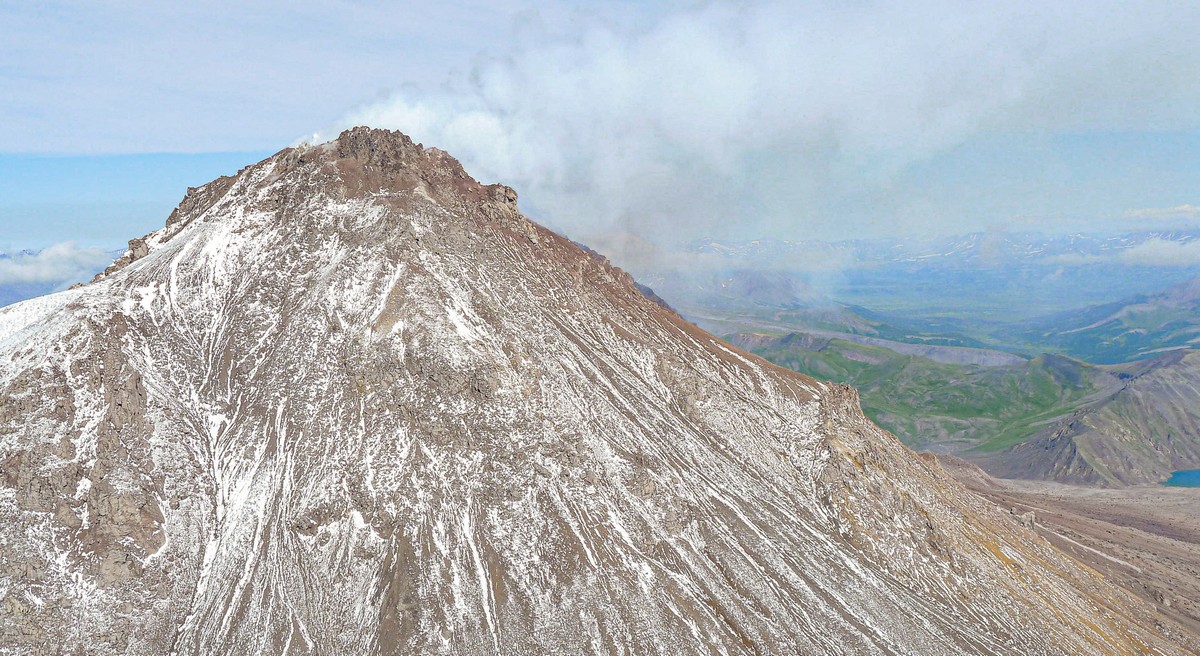 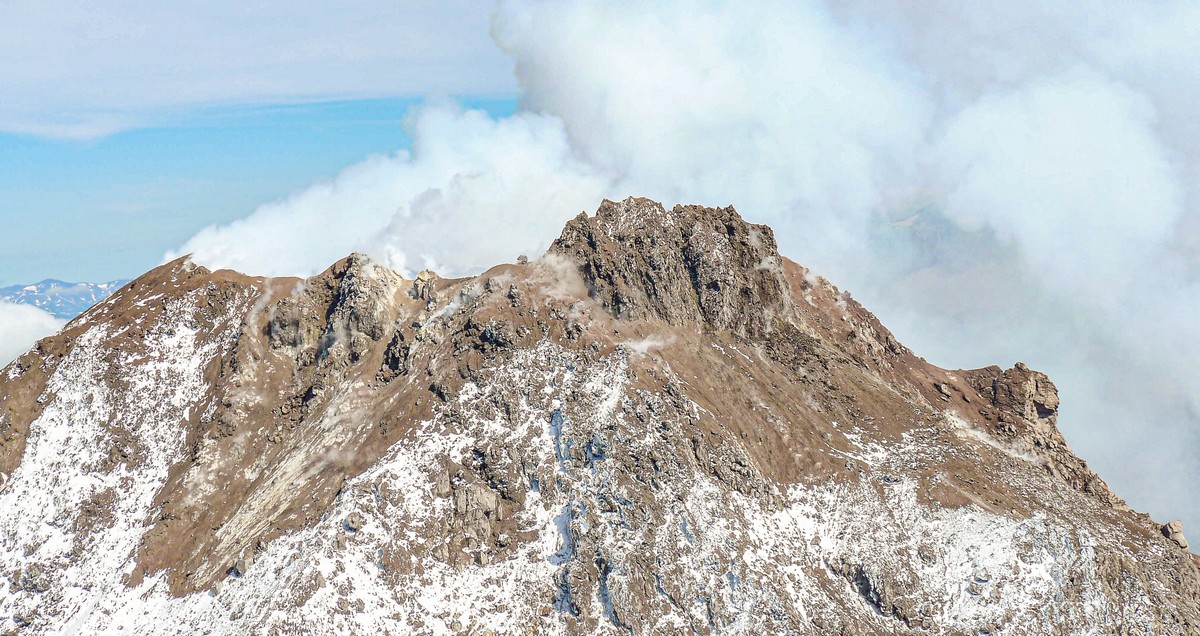 Climbing up to it from this side – deffo a bad idea: 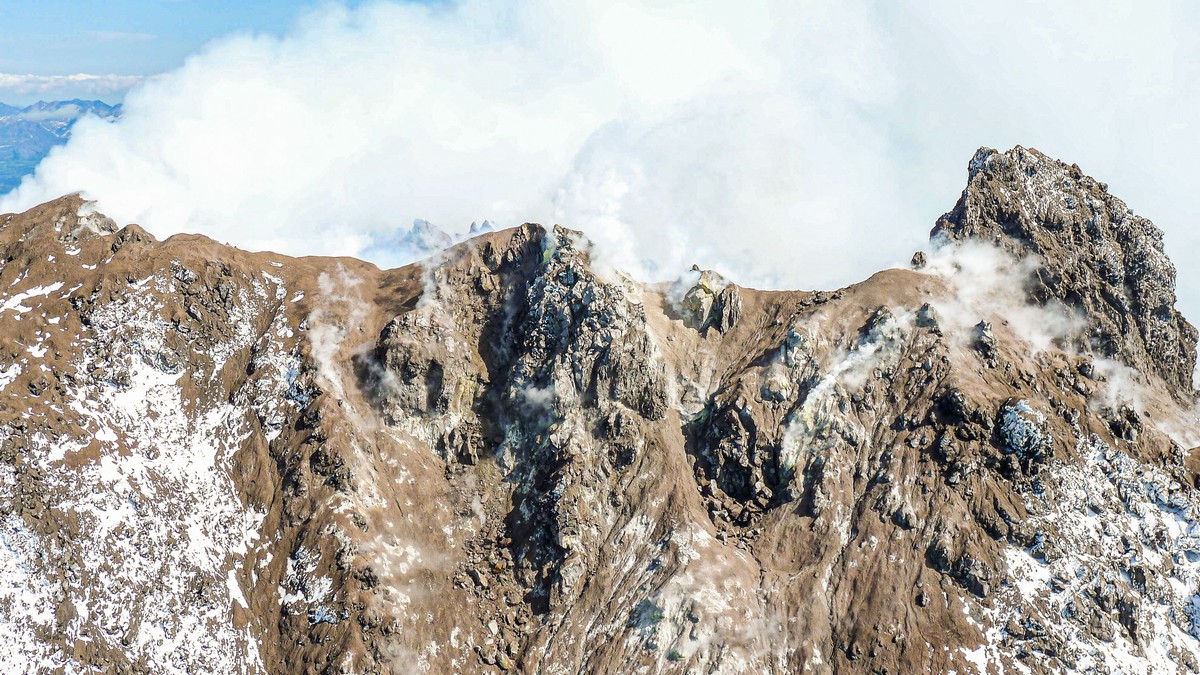 In fact, trying to climb it from any side is surely not a good idea. I mean – why bother, when there are other perfectly acceptable amazing volcanisms for the meditative nature-appreciator here? For example, there are the two totally lovely crater lakes. I dream of one day landing next to them in the helicopter and spending a few unforgettable days entranced by the view of this powerful volcano…

And from a satellite the view is pretty similar: 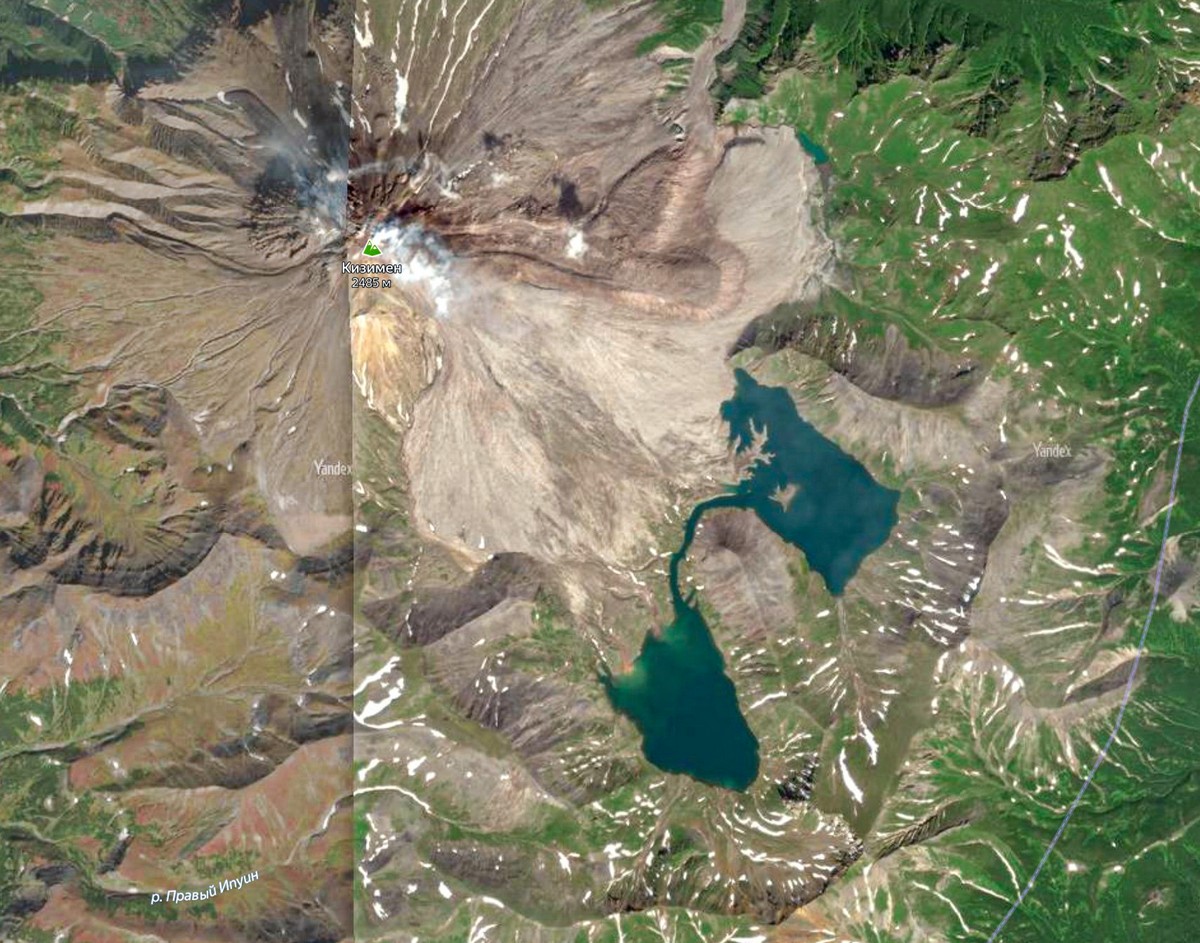 Next stop: Lake Kronotskoye, here – not far from Kronotsky volcano. From Kizimen to the lake it’s approximately 30km as the crow flies, or, rather – as the helicopter flies, from which the views are just oh-my-gorgeous!

Approaching the volcano in the chopper -> 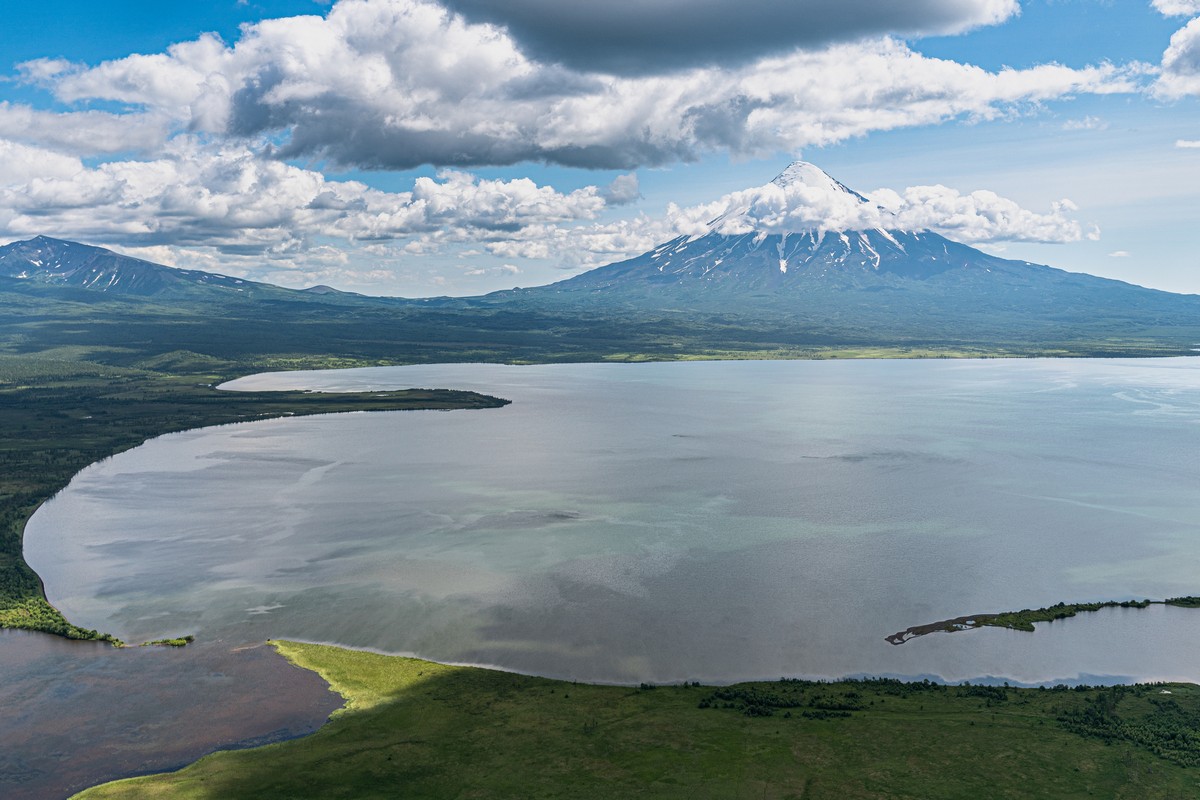 Oh my goodness. Just look at that. Mount Fuji, move over! Perhaps the most perfectly formed volcano on the planet? Here are different views of it at different times of the year: 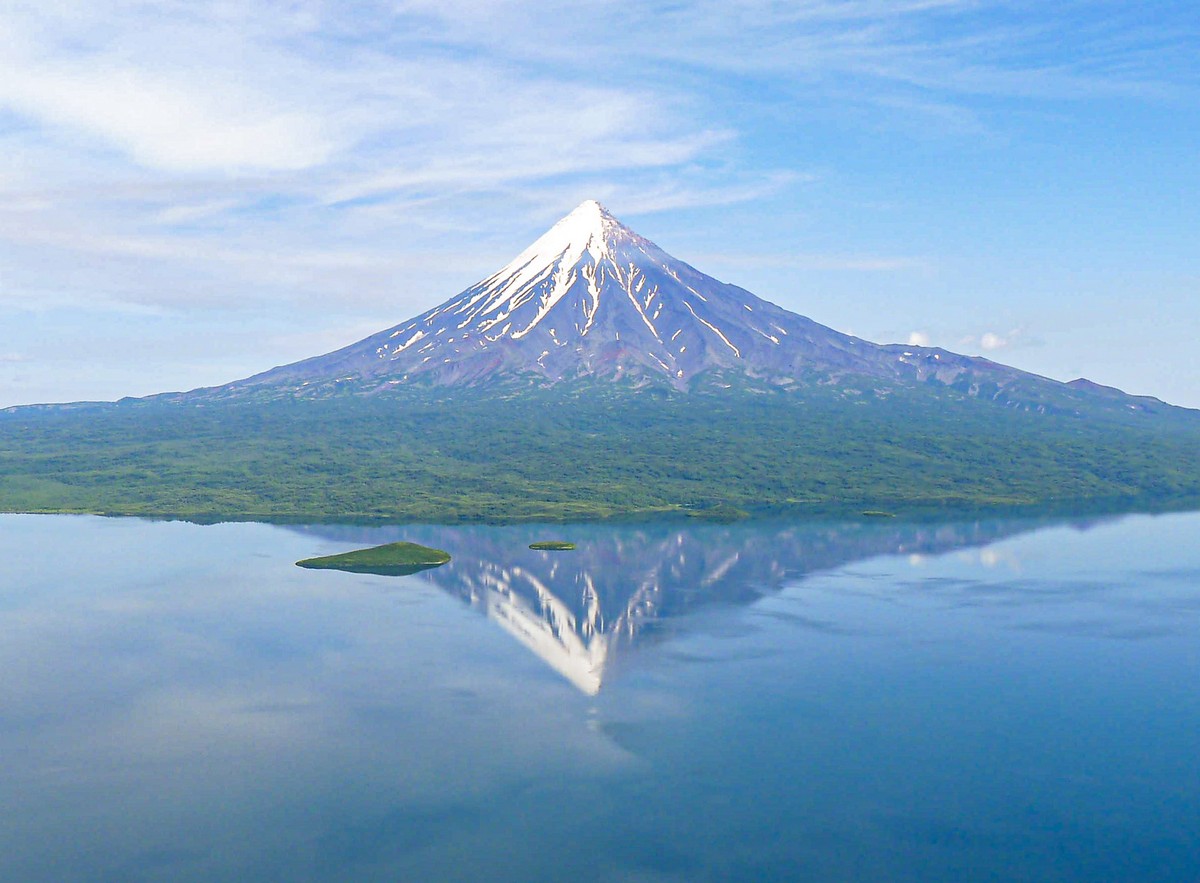 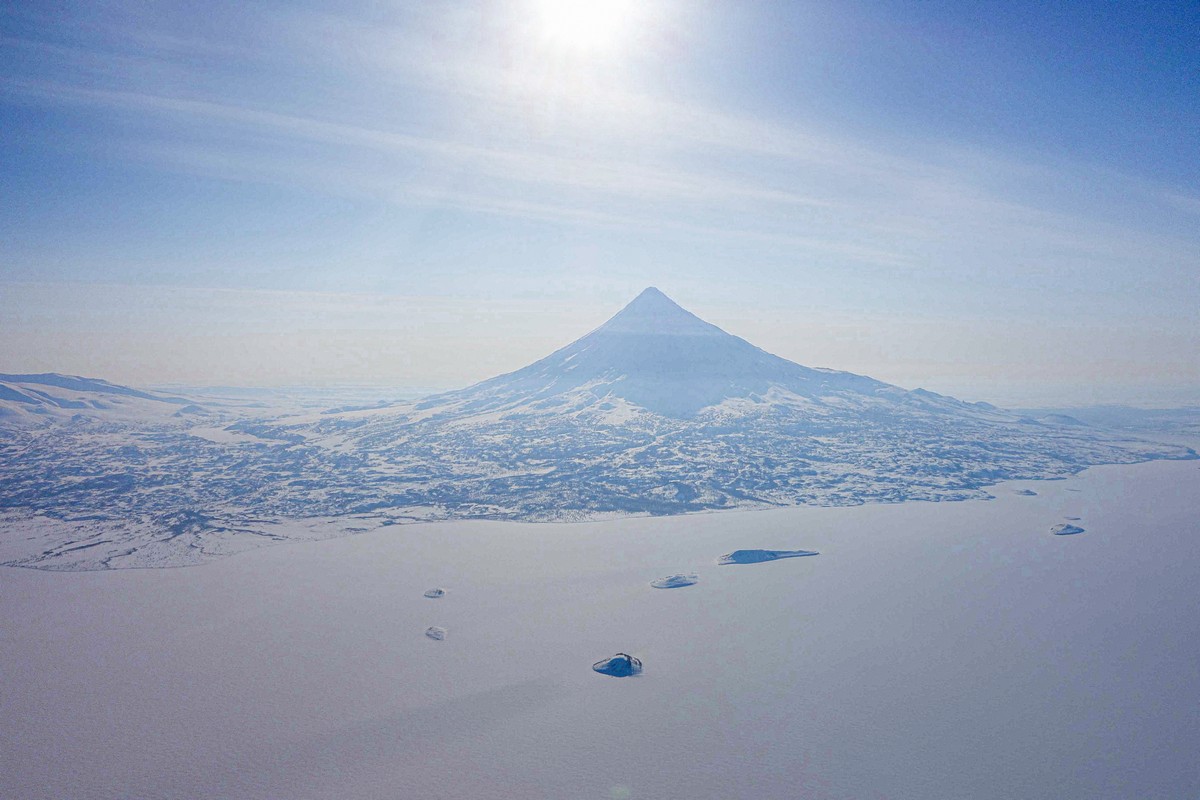 Lake + volcano + assorted other greens, blues and whites (and not a soul to be seen, just as I like it). Senses and emotions fully overloaded! 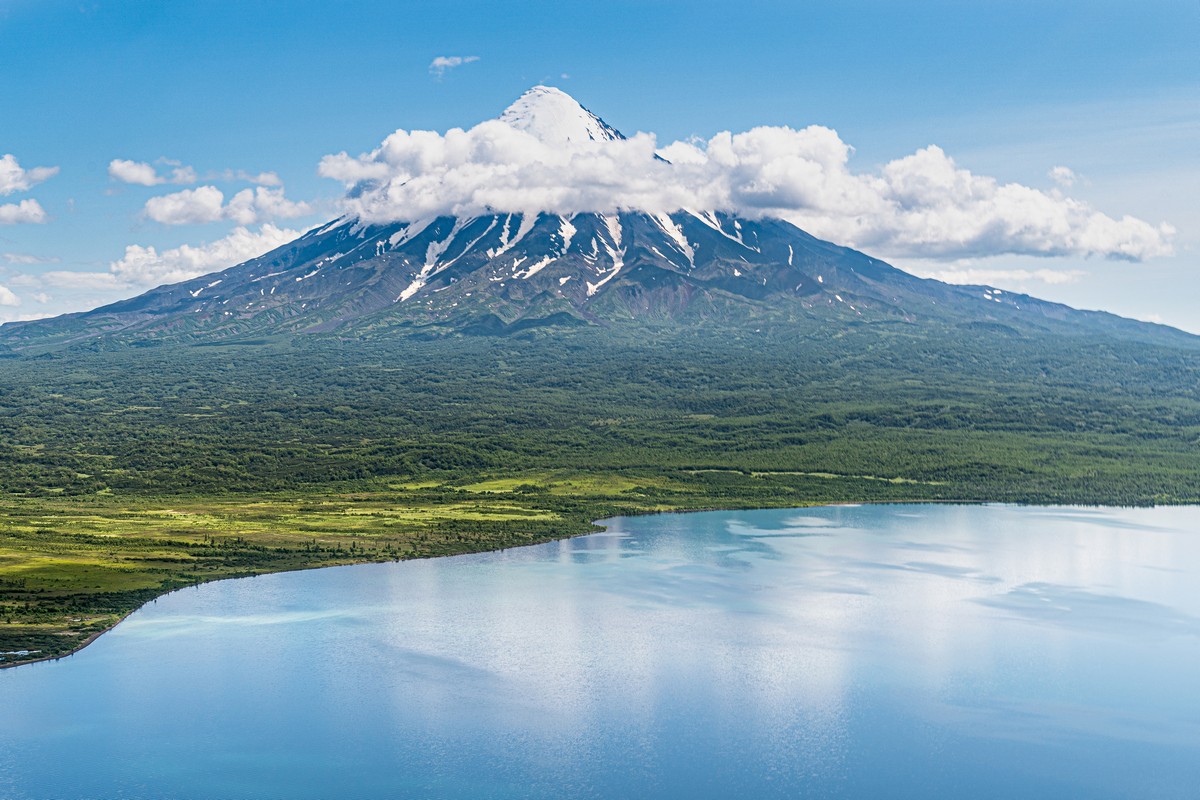 Wow. Is this the most beautiful volcano in Kamchatka? If so, I think that makes it… the most beautiful place in the world, according to moi. Well, perhaps besides the natural beauty of the Kurils and New Zealand. But… No. Kamchatka’s better, all the same ). 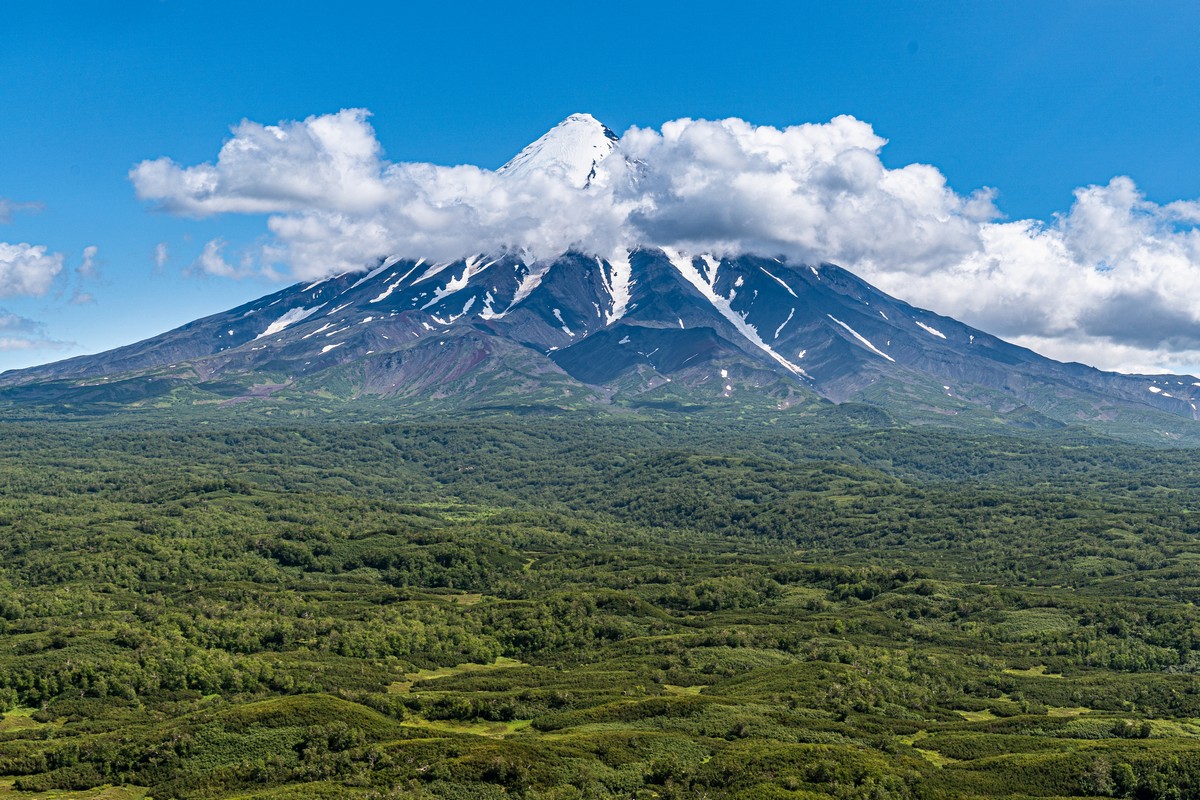 Lake Kronotskoye is the largest fresh-water lake of Kamchatka. You can see it clearly on most large-scale maps. But seeing it clearly in the flesh is much better than on a map: 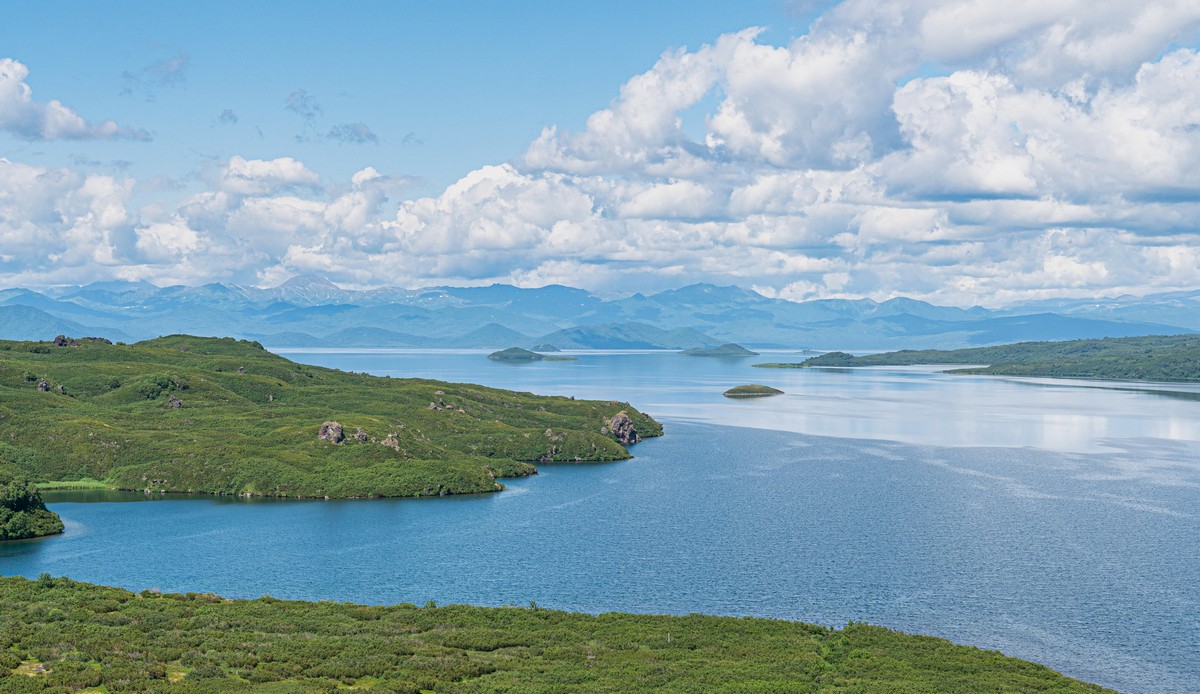 A few more pics of Kronotsky and Kronotskoye Lake (the different endings of those two words, btw, is due to the fact that a volcano is masculine, so ends with ‘y’, while a lake is neuter, so ends with ‘oye’, but the root is the same – Kronotsk.

Quick Russian lesson
Kronotsky – masculine
Kronotskoye – neuter
Kronotskaya – feminine (actually, another name for Kronotsky volcano is Kronotskaya Sopka; Sopka is feminine (ends with an ‘a’), so Kronotskaya agrees with it 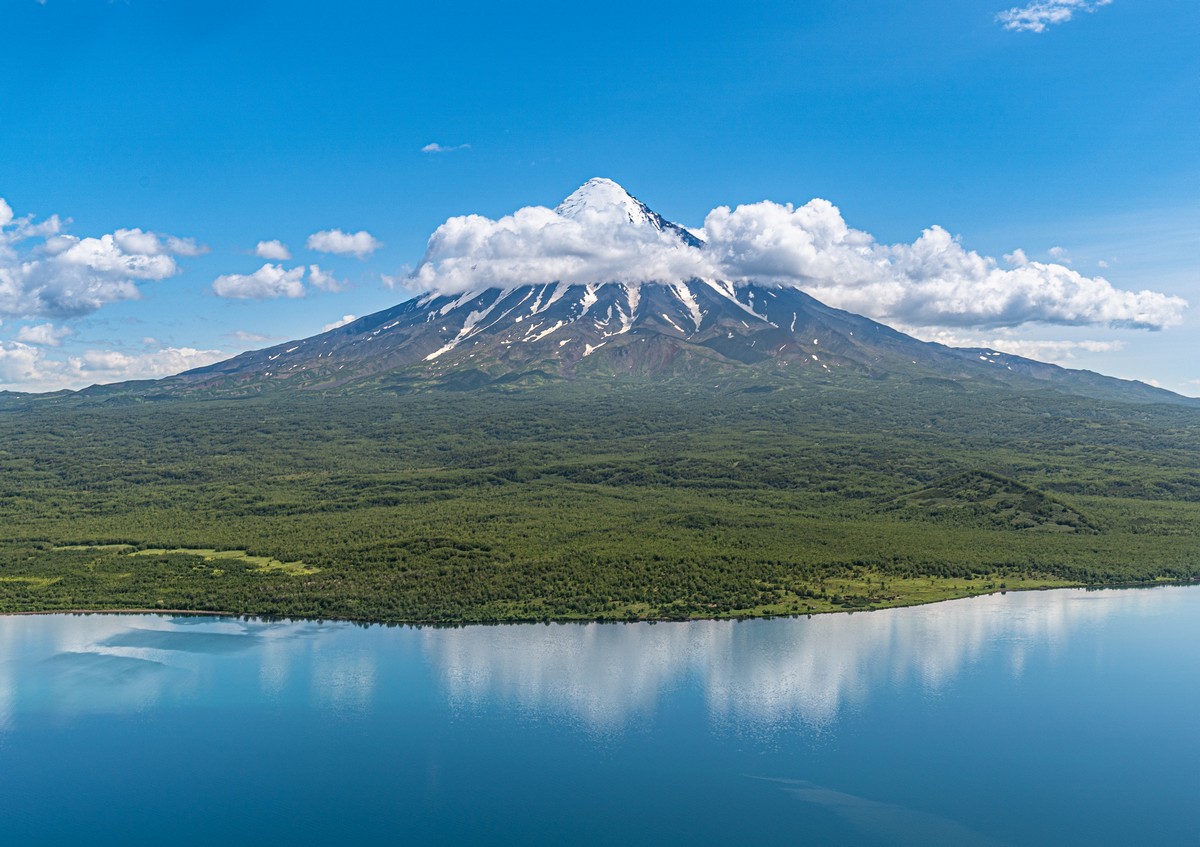 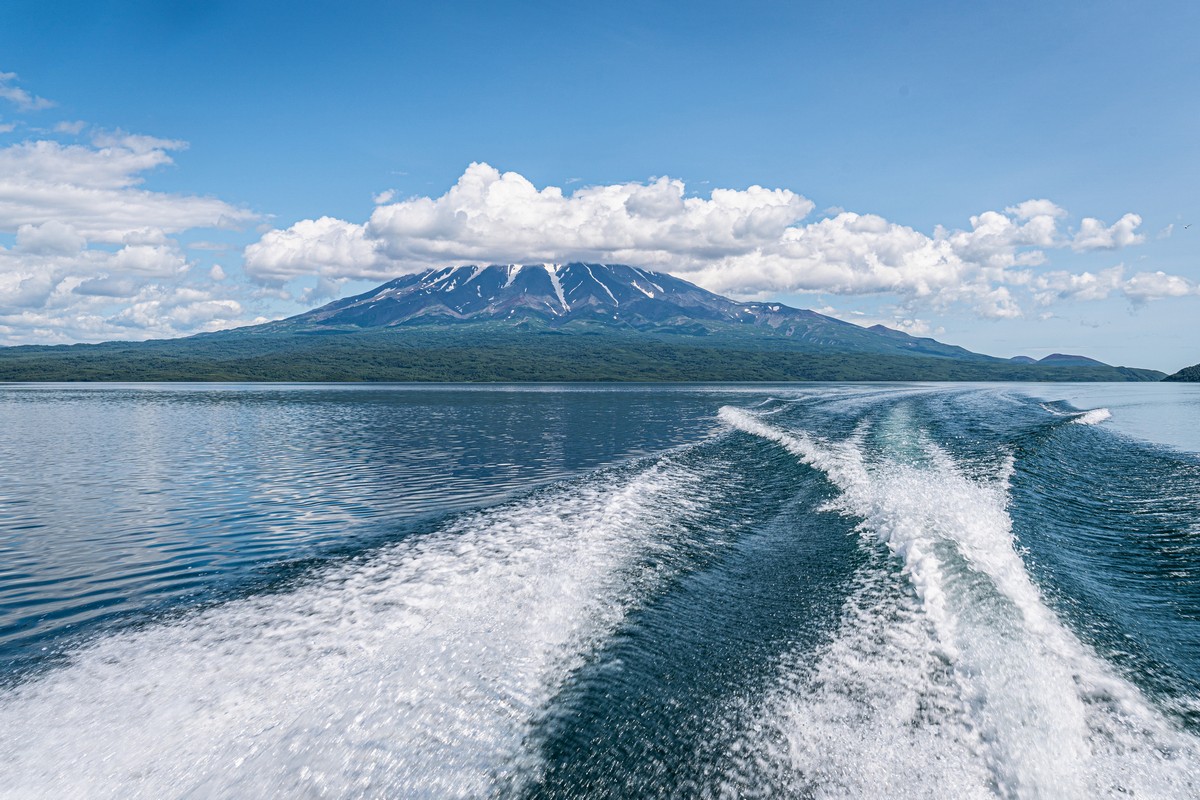 Now for some multiple choice!…

Which do you prefer out of the following three photos – taken at intervals of several seconds:

Meanwhile, we land at a base camp on the shore of the lake: 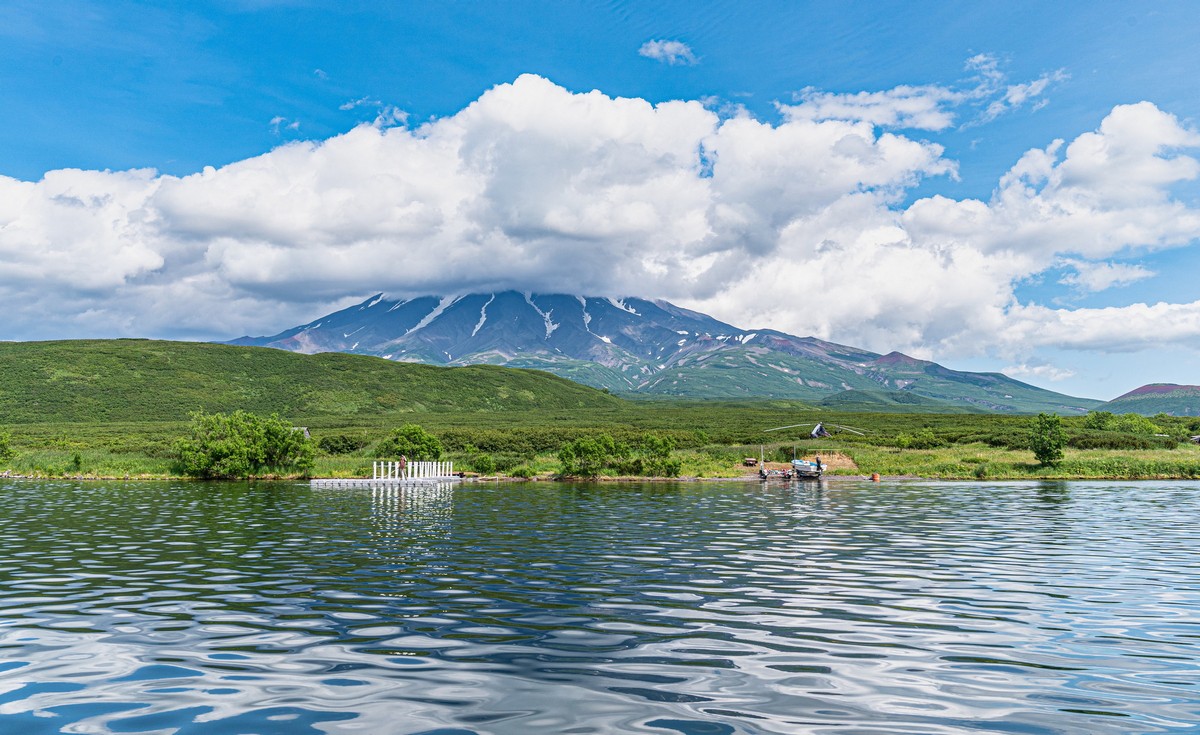 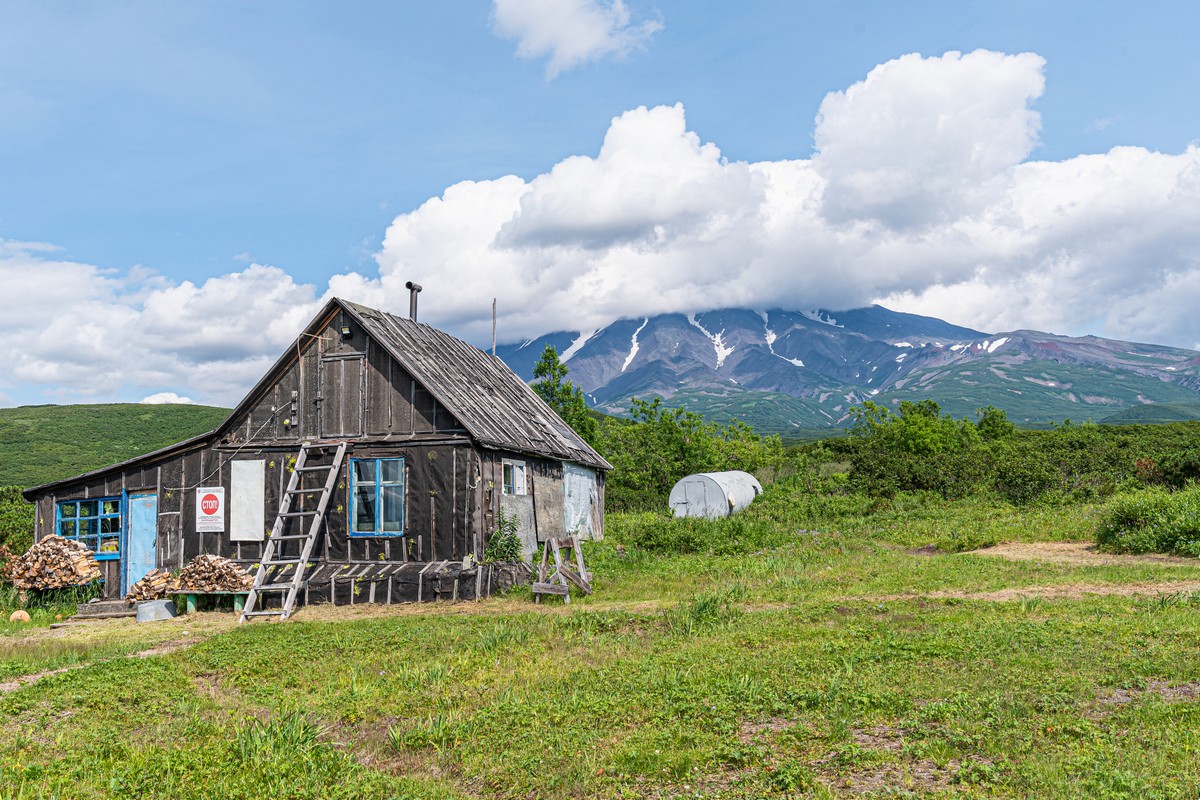 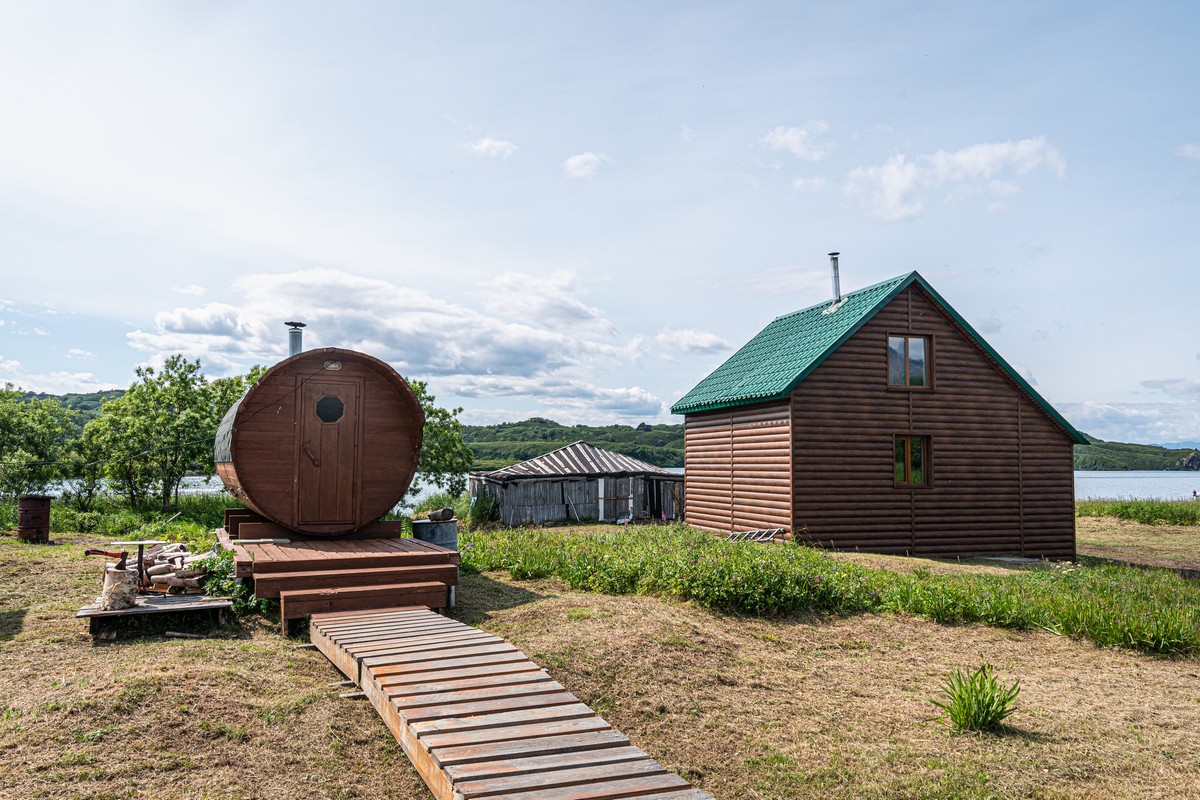 The round hut is a banya! 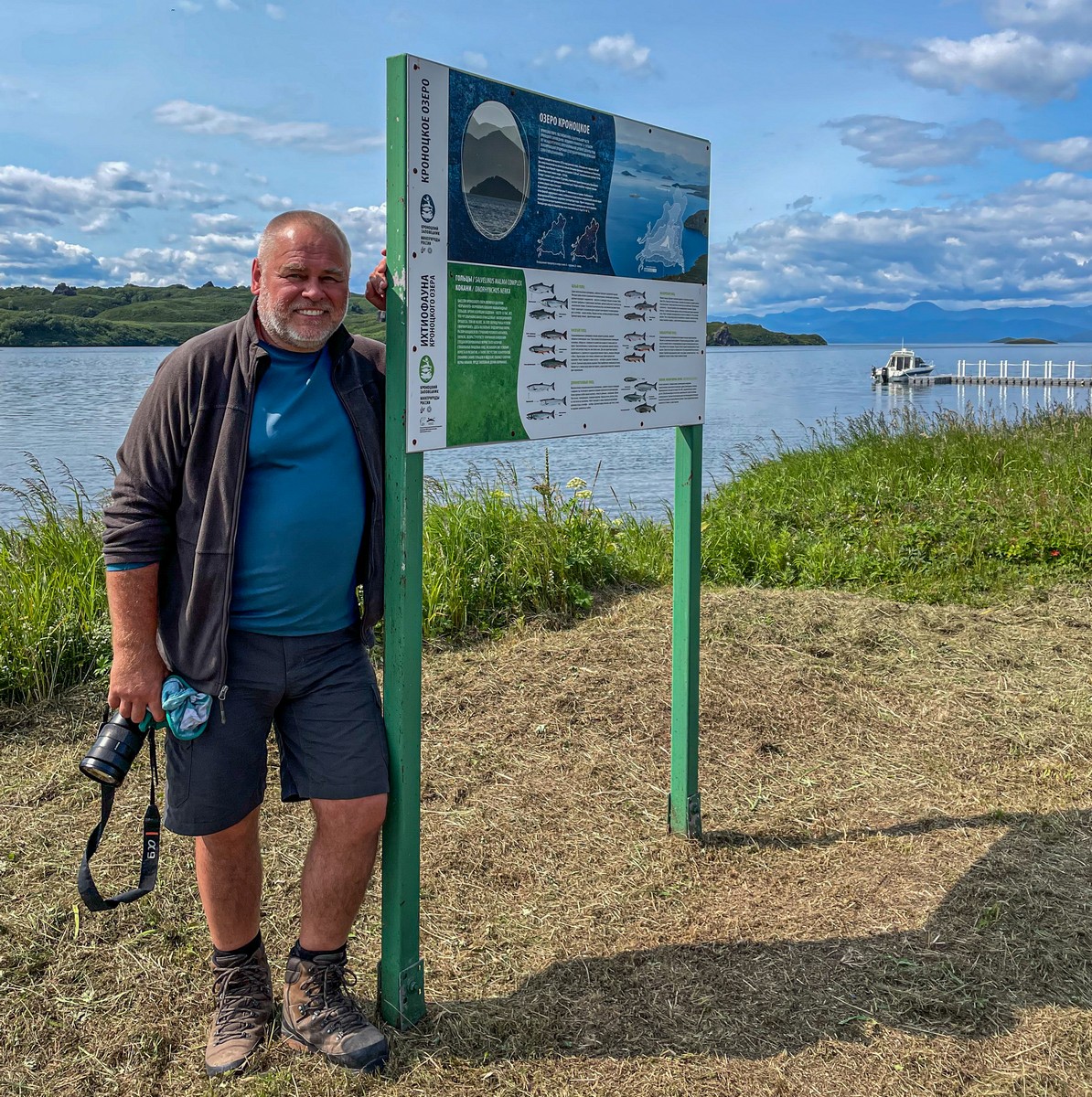 Though Kronotskoye is the largest freshwater lake in Kamchatka, it contains no salmon whatsoever. Several thousand years ago the volcano erupted, and its lava blocked the river, as a result of which, rapids and waterfalls appeared which were impassable to the salmon.

This river flows from the lake: 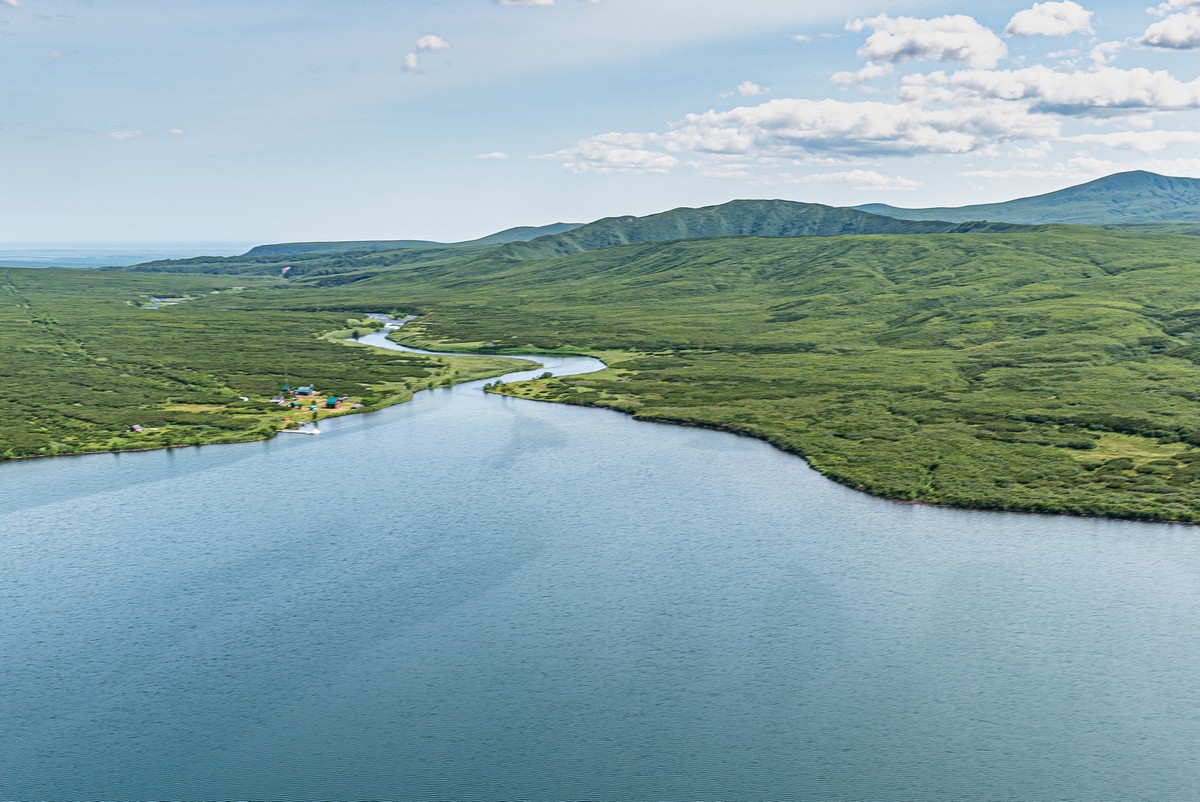 And over there are the rapids and waterfalls: 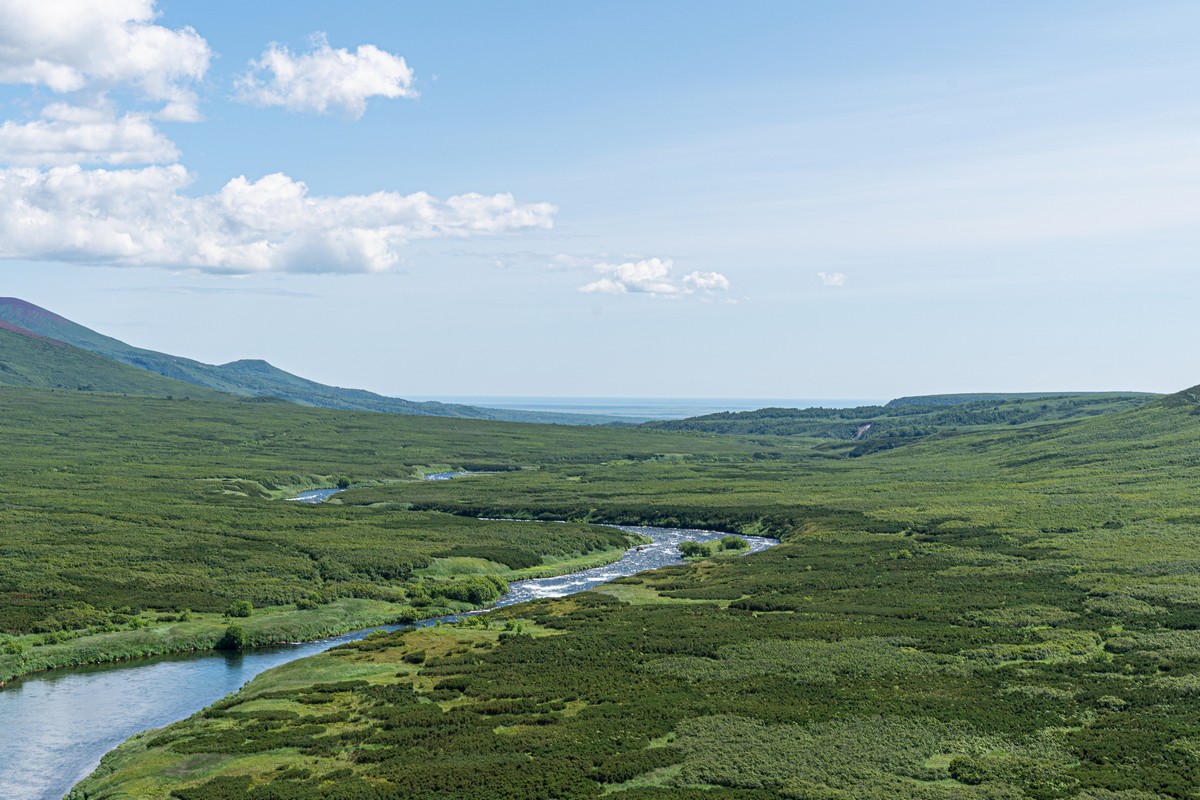 Here are the rapids on a map. 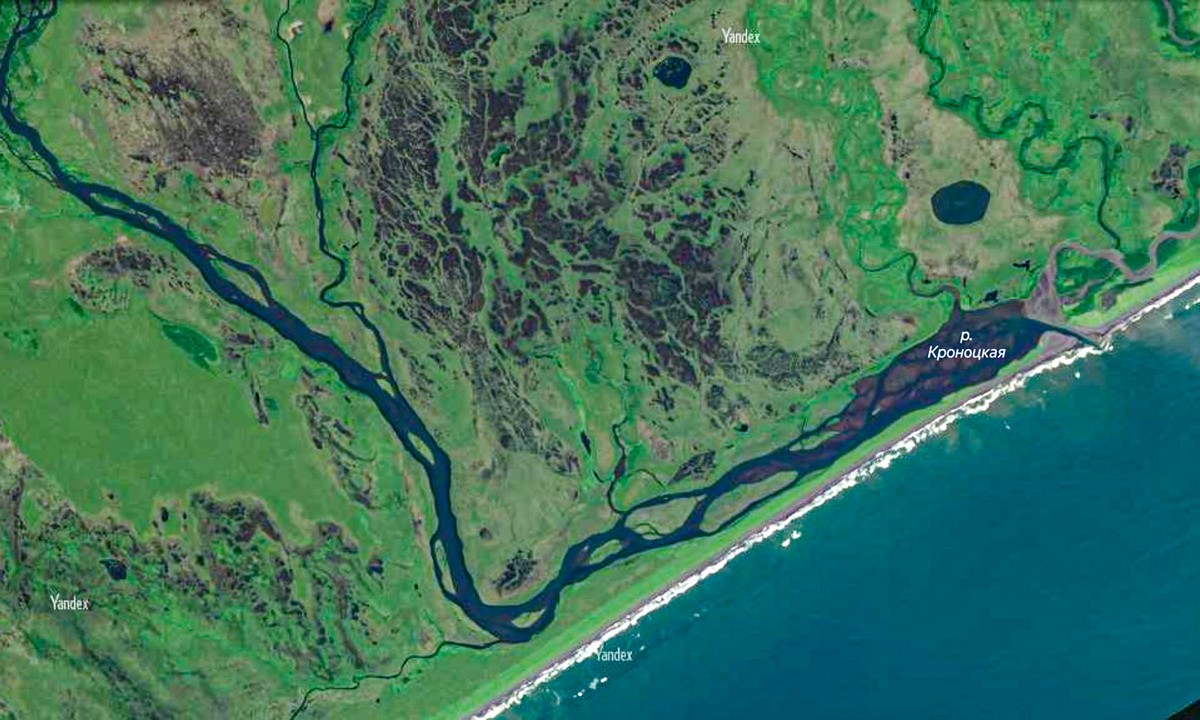 Still on the lack-of-salmon theme, here’s a curious tale…

The local fishing industry suggested digging a fish-pass (looking something like this). Then the salmon could do their jumping-spawning between lake and ocean via the river/fish-pass, and there’d be more fish in the ocean. A further positive effect of this: more fish for the hungry bears and other wild animals.

However, the nature reserve organization here is king tsar, and it said, firmly, ‘nyet’. It reckons – leave nature as it is. Hmm. Well, I’m on the fishermen’s side in this. Why not help nature out here, especially when there appears to be no downside, only good sides?

Anyway, things got… complicated. There were heated arguments, petitions, the press got involved. It was truly a ‘porridge’ of absurdity and silliness; meanwhile nothing was done to help out the salmon and bears.

I first heard about this hoo-ha/brouhaha two years ago when I was here the last time before this year’s visit. When I returned this summer – the same brouhaha was still raging. Such a shame. Still, I’m forever hopeful and positive, as you know. I think one day in the not too-distant future things will change. And if the nature reserve doesn’t green-light it, surely the river will one day eventually wear down the rapids-causing roughness of the riverbed, and the fish will be back to their romancing-jumping-frolicking-reproducing that way instead ). 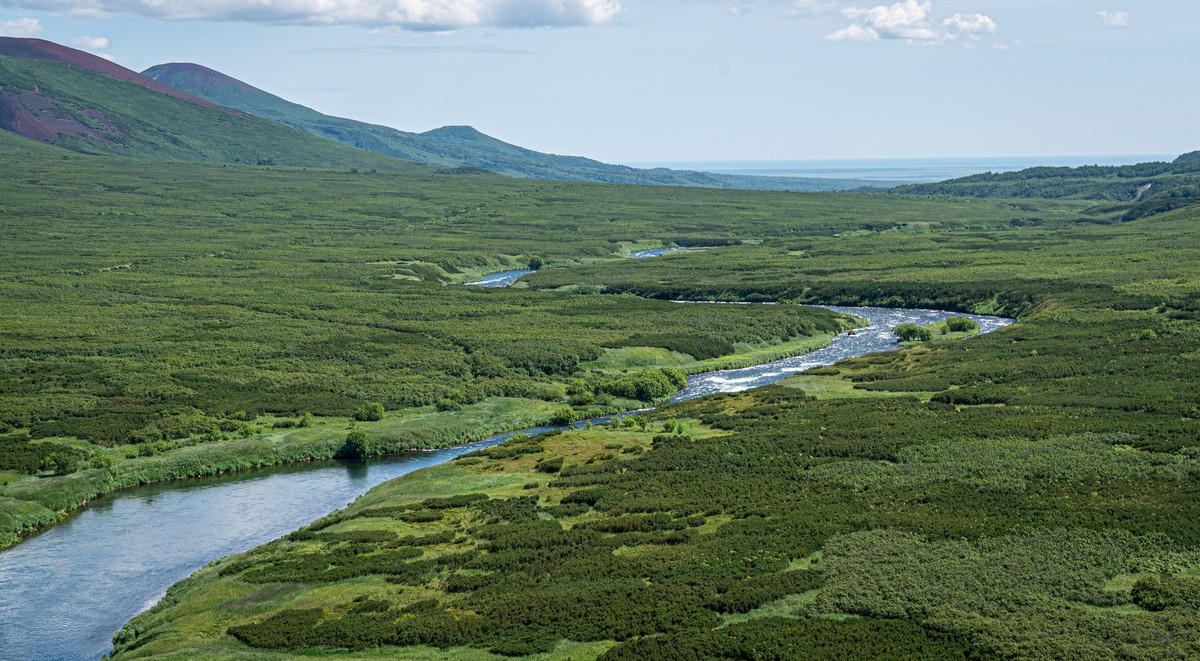