All three cones are painted in dark, somber tones, while at their peaks there are flourishes of color. Up top, this is how they look today:

Meanwhile, from a satellite, you see different colorings. For example, the greens of the surrounding vegetation, the white of the snow and ice at the peaks, plus the huge black… smudge, which extends from Ostry Tolbachik in a southwesterly direction – the black volcanic slag left behind after the eruption: 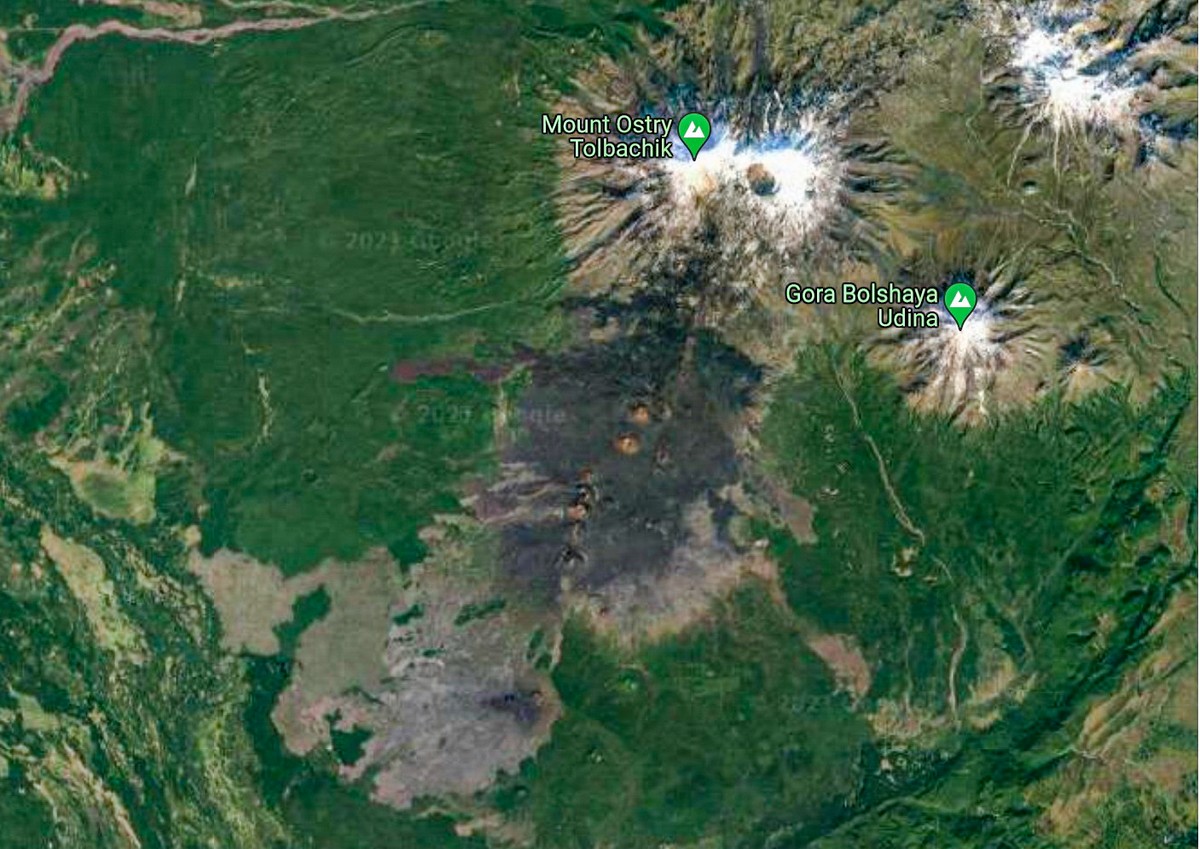 And here are the three cones: 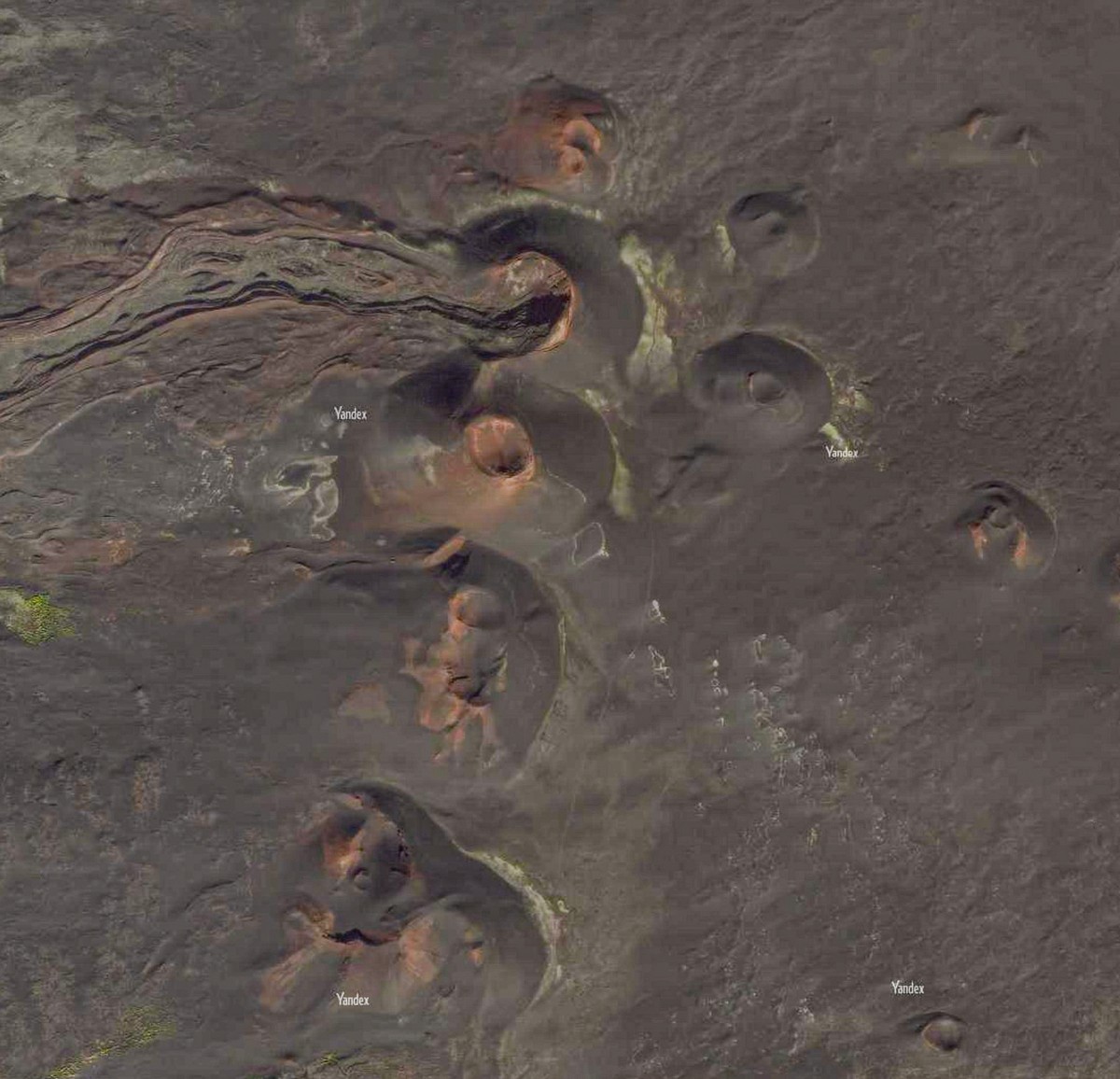 There’s a great Russian site on the net with a ton of Tolbachik eruption info. Here’s a translation of one paragraph of note:

‘From July 9 to 23 [1975], there occurred an almost uniform evacuation of massive quantities of gas, ash, slag and volcanic bombs. White hot pyroclastics formed a fiery ‘candle’ of a height of 1-2.5km. A gas-and-ash column expanded up much further into the sky – some five to six kilometers tall, while an inversive eruption cloud rose some 10-18km up. Meanwhile, a trail of ash extended laterally measuring some 800 to 1000 kilometers long. Bombs of a diameter up to 30cm were shot out of the volcano landing up to two kilometers away. And the speed of the outflow of gases was on average 100-200 meters per second [360-720 kilometers per hour] – sometimes even exceeding the speed of sound [343 meters per second (1235 km/h)].’

‘The speed of sound’? Oh my. Being a volcanologist must be so dangerous interesting! Oh, and if you’ve never heard the term volcanic bomb before, there’s Wikipedia with the explanation, and here’s me with a brief summary: they’re blobs of lava that are thrown from an erupting volcano, which solidify before they hit the ground. And they come in all sorts of sizes and weird and wonderful shapes.

‘[During the eruption] there occurred hydrogeological and landscape changes to the environment. Vegetation was completely destroyed over an area of around 400 square kilometers. The existing – ancient – shield of lava covering the ground was covered with a new thick layer of slag and ash, and pyroclastics spread more than a thousand kilometers around the eruption’

Though it’s nearly 50 years since the eruption, the cracks in among the rocks at the tops are still scorchingly hot – so much so that still to this day (yep, in 2021) you can light a piece of paper in the cracks, or even a stick! -> 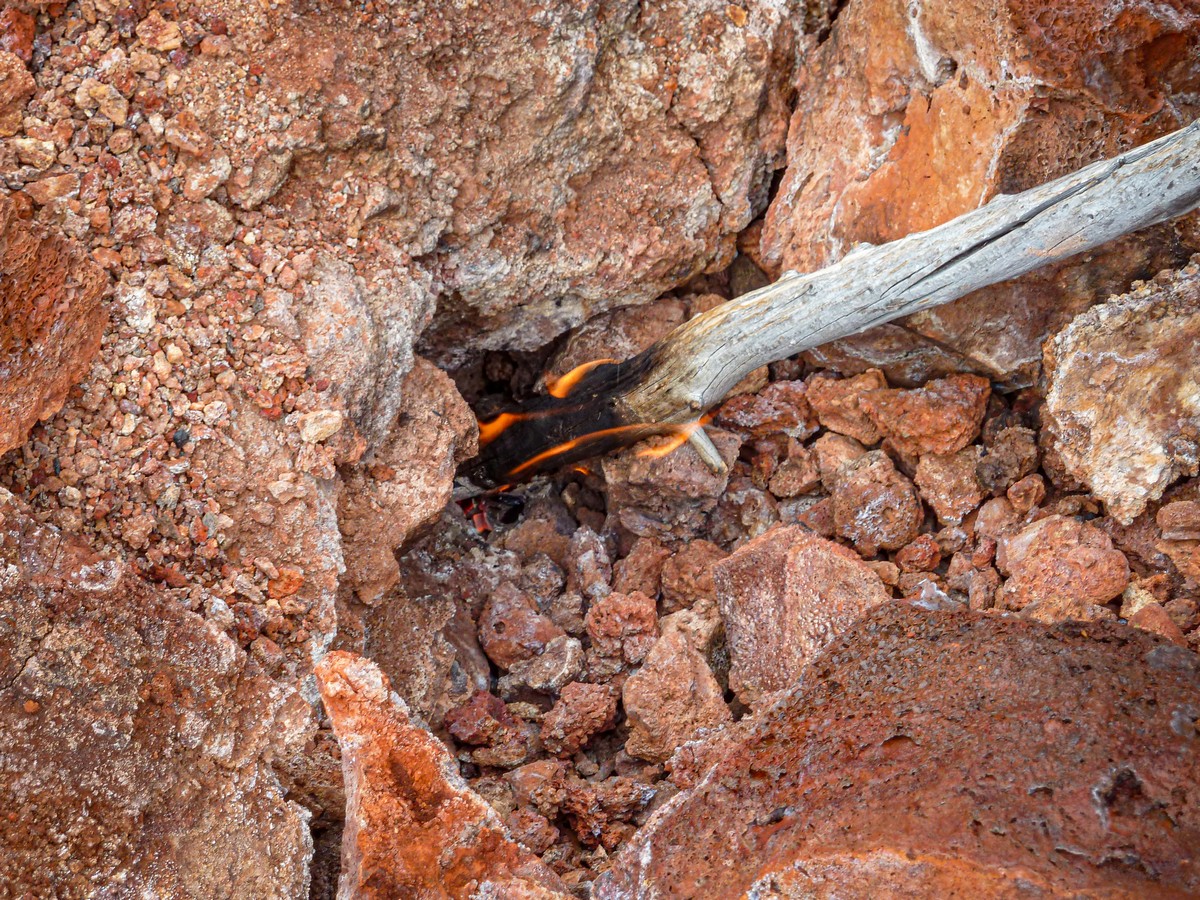 Such was the mega-eruption in the mid-seventies, which volcanologists cheered on, and (adventurous) tourists ever since have relished. Thankfully, there’s no human habitation around Tolbachik at all, so that meant no ugly, deadly stories involving human beings and their homes (unlike just recently in the Canary Islands).

The most colorful and perhaps most unusual features here are the multicolored ones on the peak and a short distance inside the crater of one of the cones – named Gorshkova Sopka: 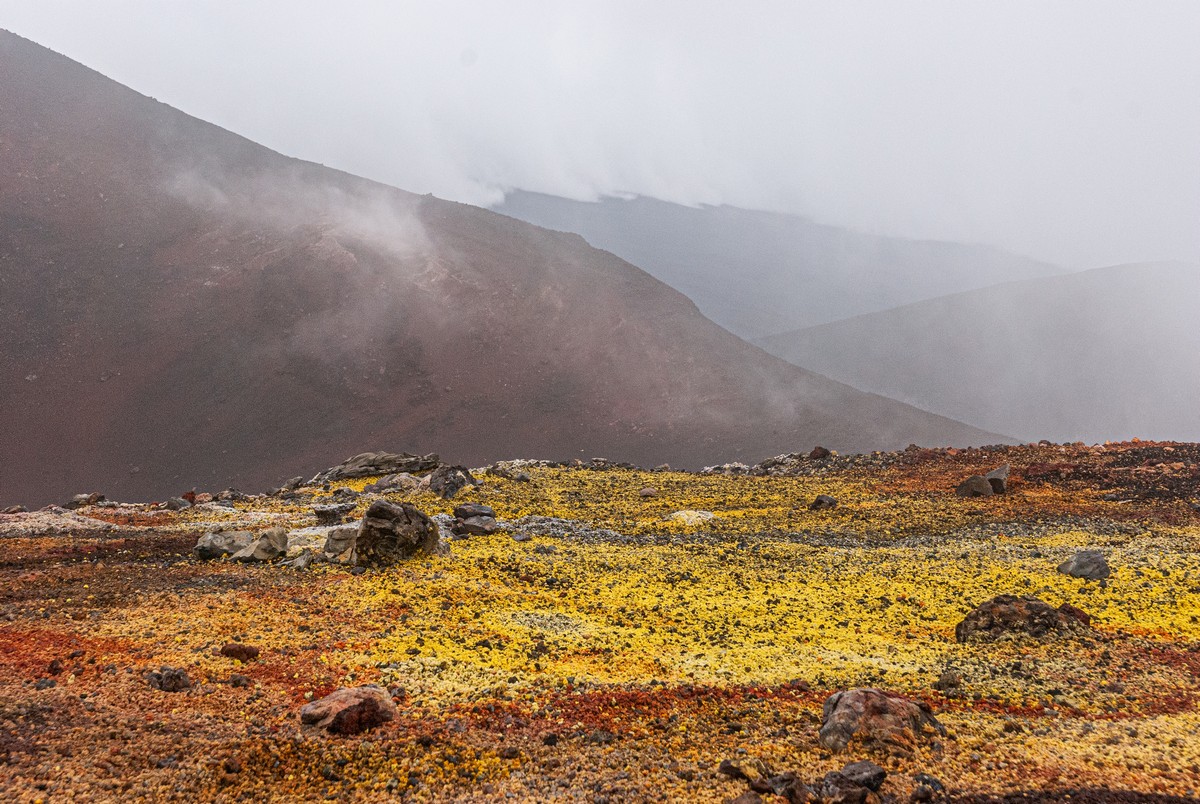 What an extraordinary, astonishing place! Unknown underground chemicals (indeed, they keep finding ‘new’, unique minerals here!) emitted during the eruption (and maybe since then too), which magically paint the peak of the cone in a multitude of assorted bright colors!

Just look at the richness of that ruby-red. Oh my gorgeous!

Wait – I said a ‘multitude’ of bright colors. Actually – all bar blue and green. Everything else – all present and correct, sir! 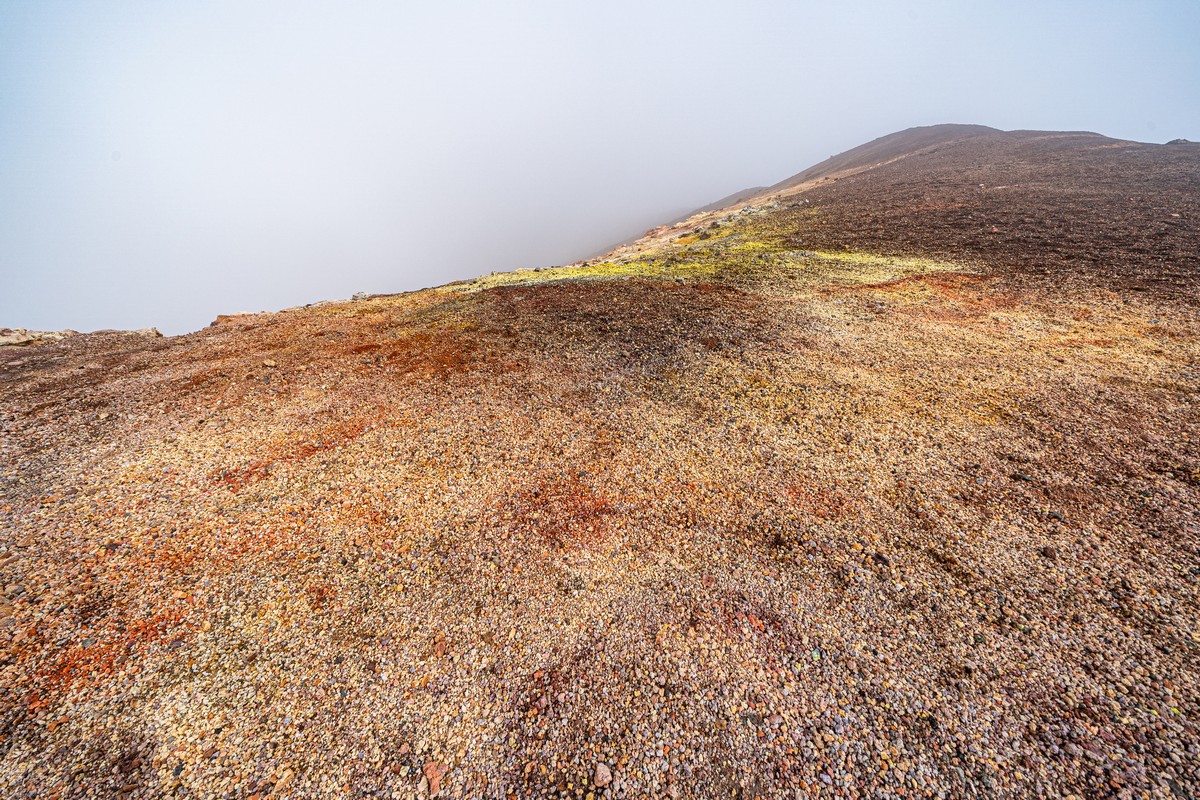 Wait – there’s more unique craziness: the colors here get brighter… when it’s rainy! On a bright, clear day, the stones stop their sparkling and become dull. And it’s only by chance that I know that, as only once – for a short time – did the sun come out. The rest of the time during that visit – and on all other visits – the sun never showed up at all! 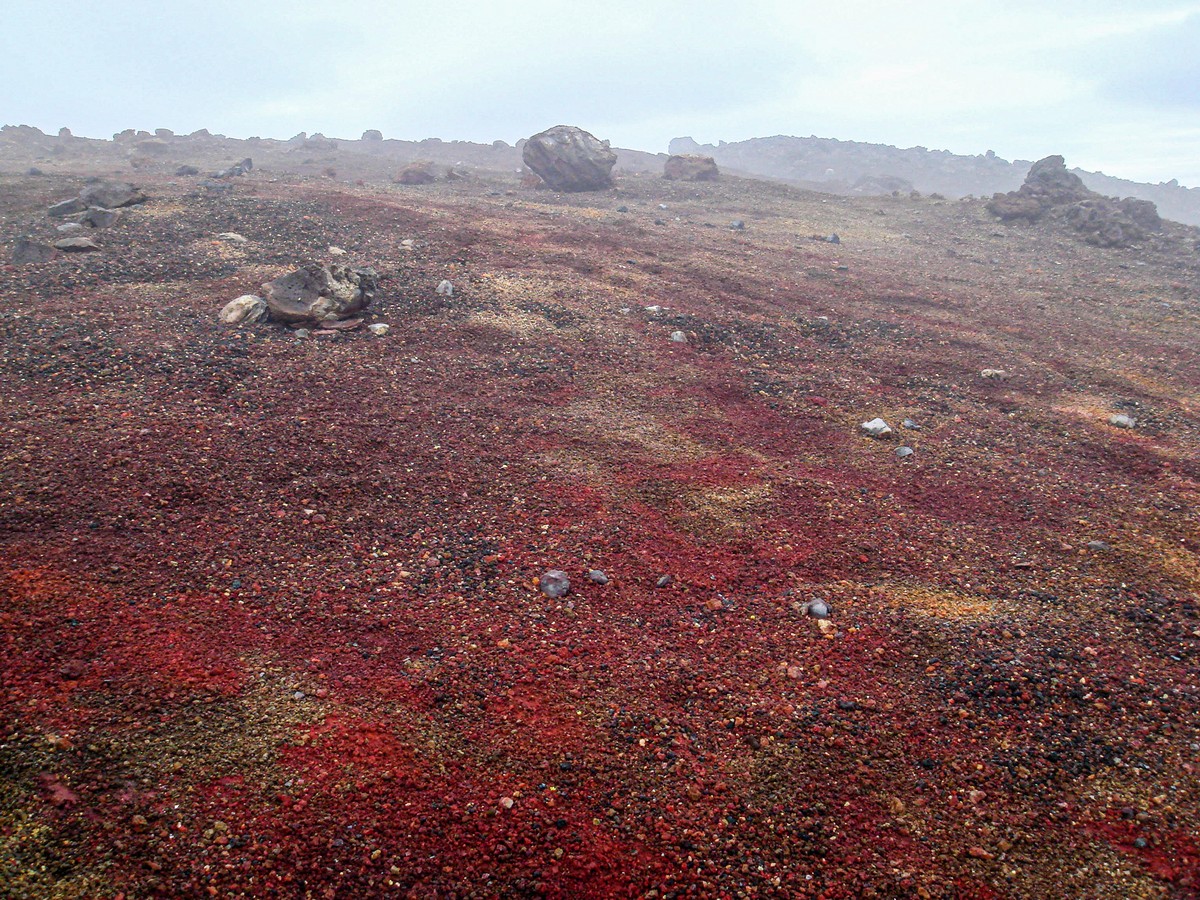 When you get a closer look, you can see that all the colors come from tiny volcanic stones – called lapilli: 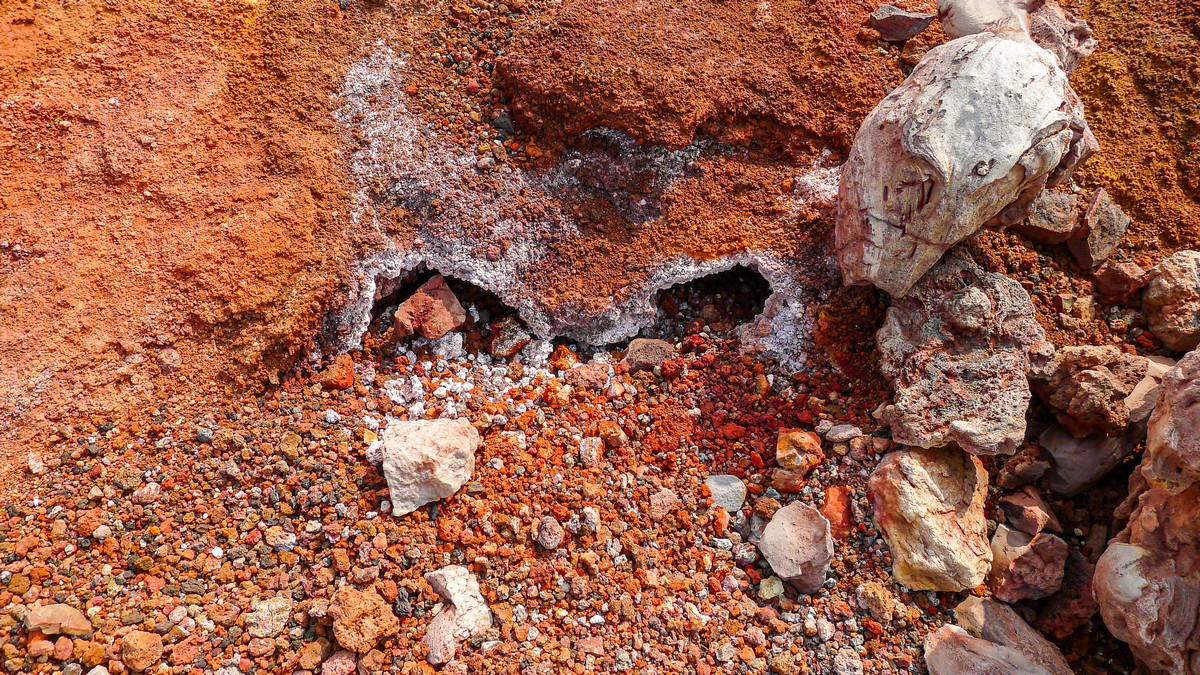 If ever you’re here, your guides will probably only show you what’s under your feet. The views into the distance all around will be spoiled by cloud or fog. Example: I’ve been here a full four times, and I’ve never been able to check out the full Proriv with Tolbachik in the background. I’ve only ever seen separate parts…

So – yes; getting the full picture is a rarity here. Best bet for getting a glimpse: fly here in a helicopter, land, then sit. And sit. And sit some more. Only for the devoted volcano-head, it’s true ).

After walking back down from the peaks, we enter… Dead Forest…

I mentioned above how, during the mega-eruption of 1975-76, volcanic slag and ash covered a large area of forest here. Everything living died and the trees withered, and so they named the place, logically, Dead Forest. Curiously, endless scenes of lifelessness on black slag fields – though very unusual, they’re somehow not as depressing as one might expect. Like I say, just unusual. And even photogenic – from certain angles… 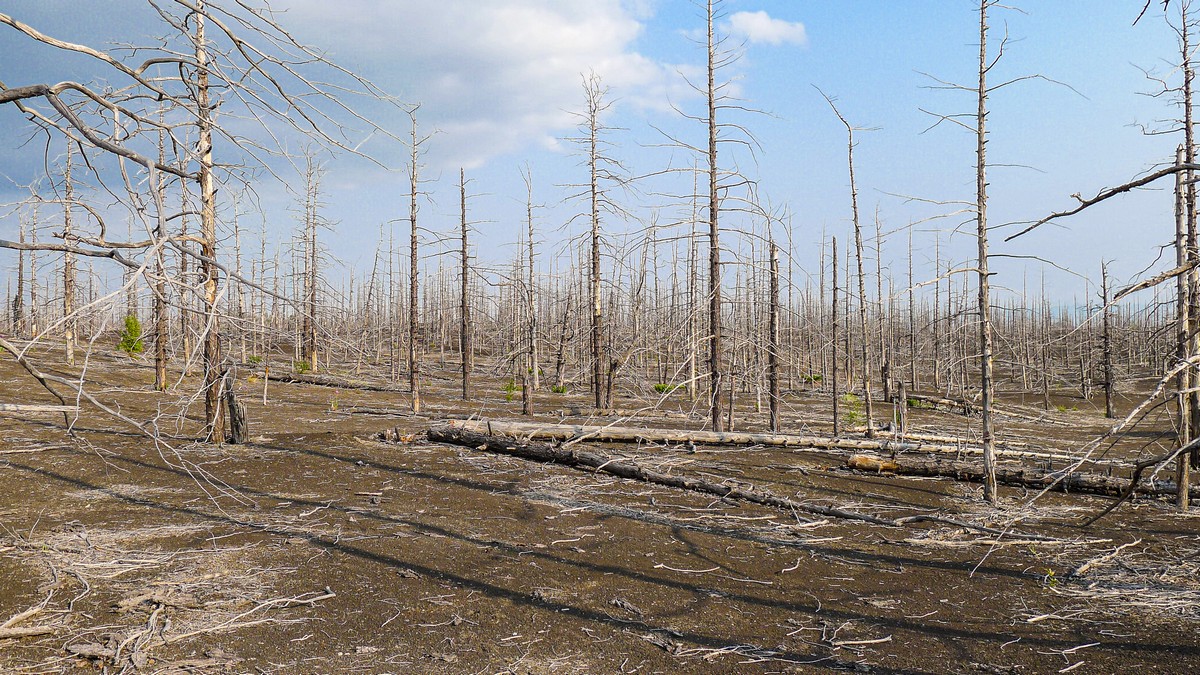 In the photos, things look very bleak and dispiriting – tragic even. But in actual fact, when here yourself – perfectly fine. Weird!

The forest is was made up mostly of fir trees. Small trees’ branches were pressed to the ground by slag, empty spaces formed, and now and again ~sinkholes show up: 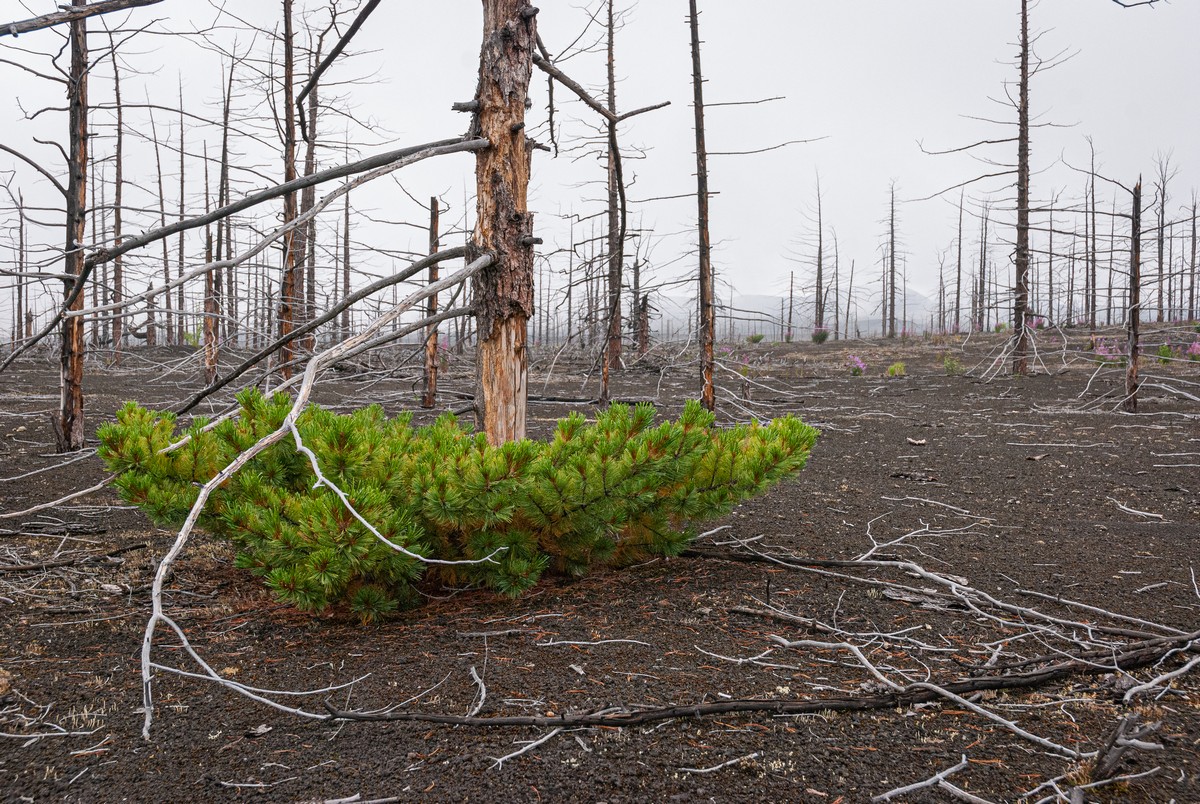 Check out the following pics of one and the same spot…

Onward, for more Tolbachik-environs’ exploration; next up – Zvezda (Star) crater, which is a couple kilometers south of Severniy Proriv.

Zvezda is a small volcanic formation – a mere 20 to 30 meters high and a diameter of around 50 meters. It’s a nano-volcano out of which, something like more than a million years ago, very liquid lava flowed in different directions – but not for long. Curiously, if the lava had been fairly viscous, or the eruption had lasted a long time, then a volcanic cone would have grown up. But there isn’t one. Instead, a million years ago a hole opened up in the ground, out flowed watery lava real quick, and that was that. Done. After, tunnels formed in the lava that was emitted after it cooled, which today you can crawl along… 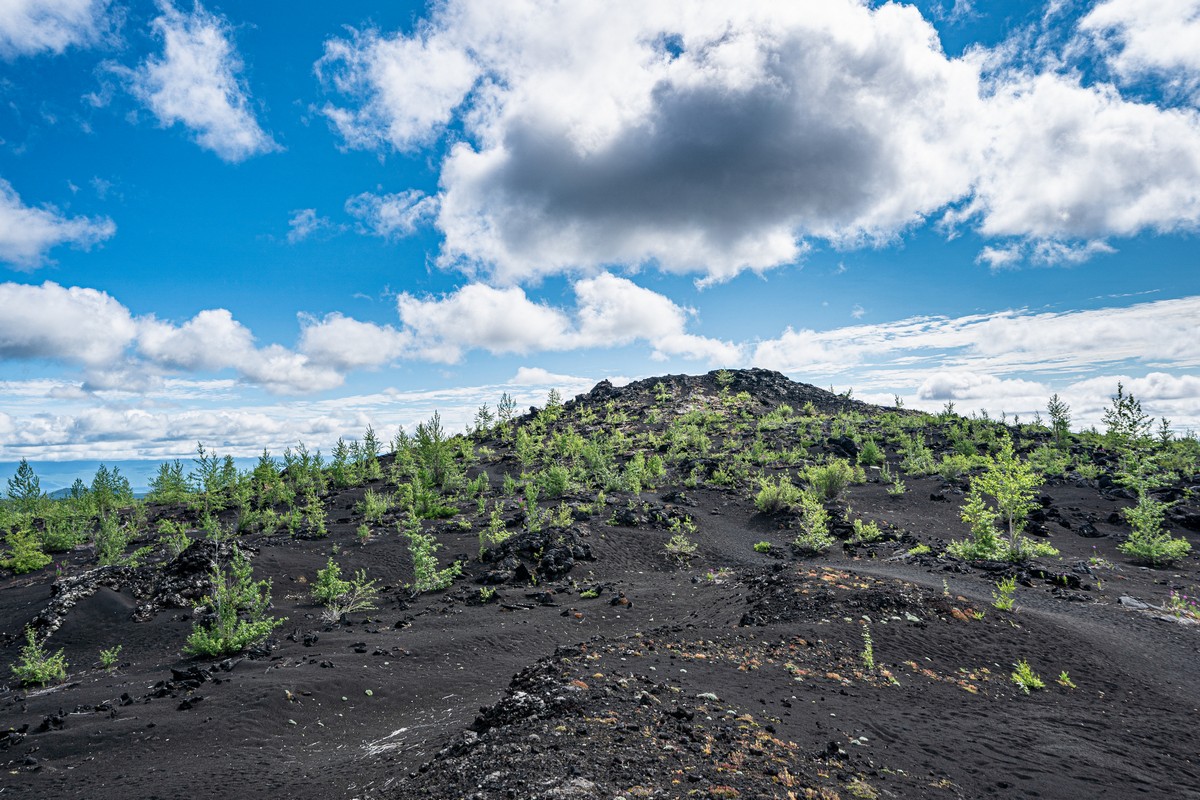 But before you can crawl along them, you have to find an entrance to a tunnel: 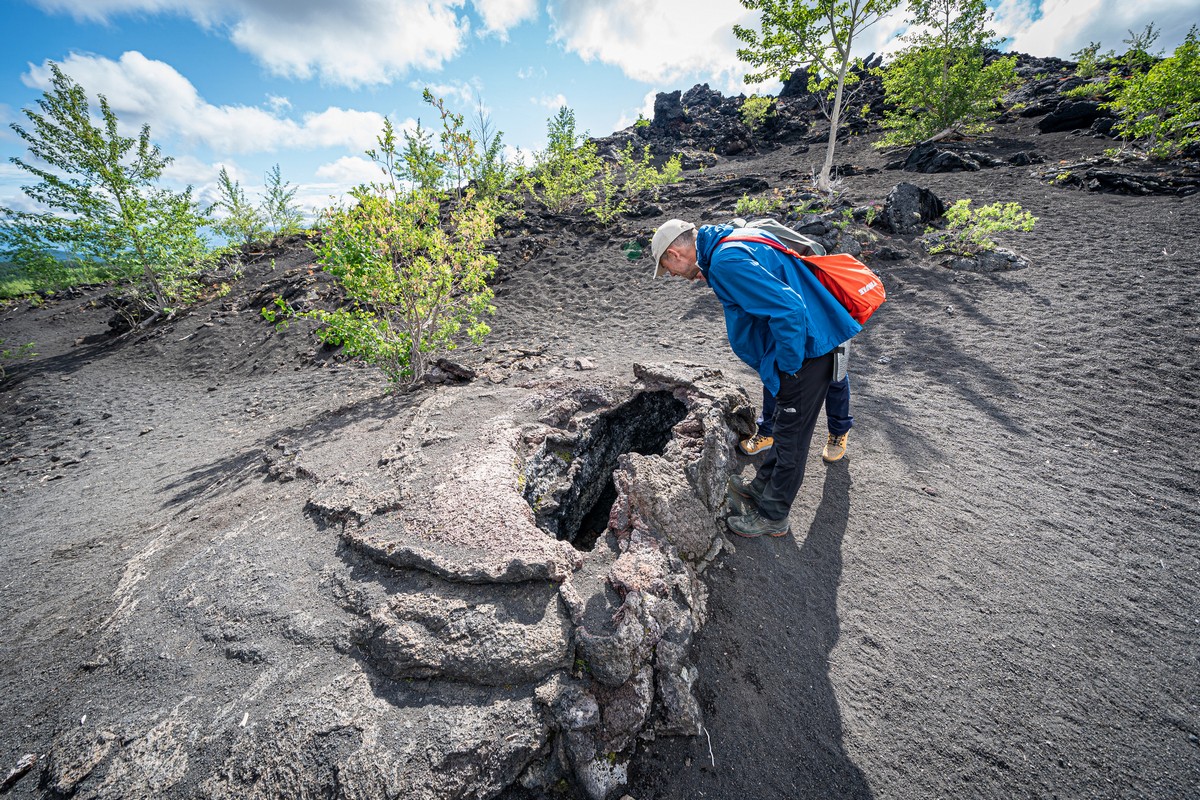 And, yes, you do have to be rather brave to consider a tunnel crawl! -> 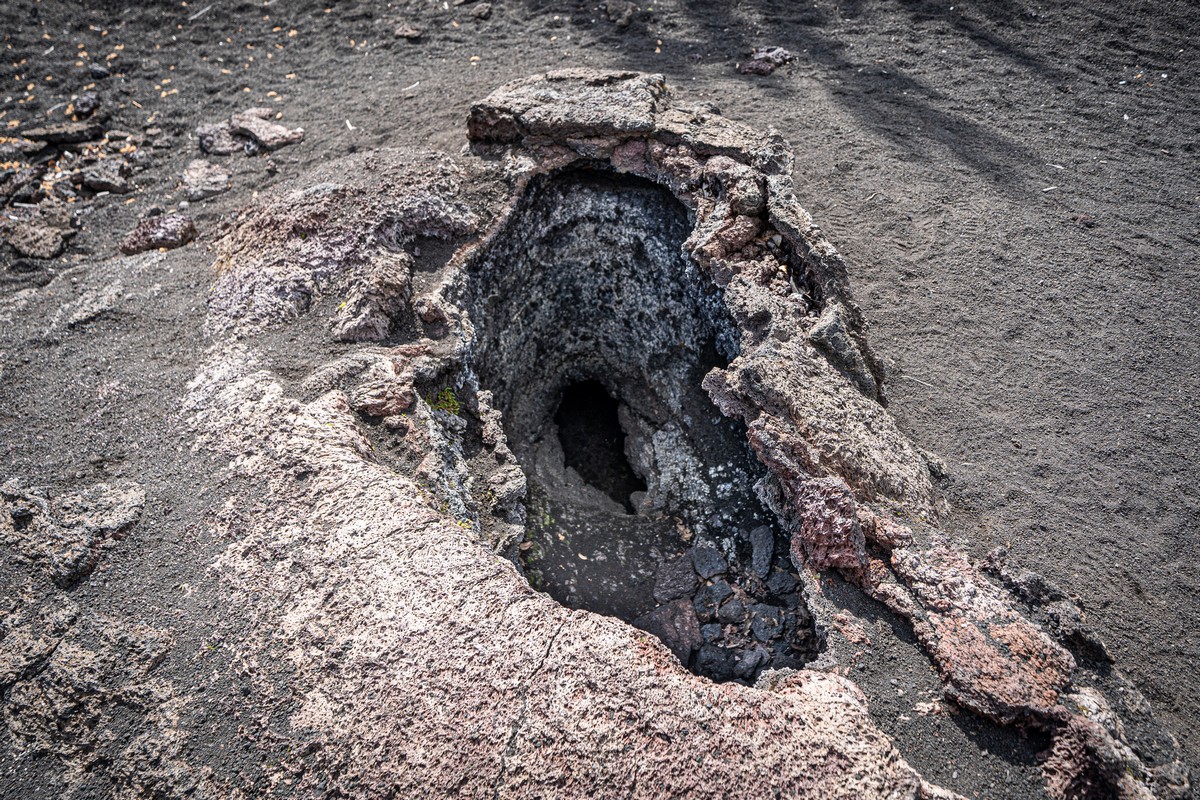 Down you – brave soul – go; a little later, it’s along you go crawl. And a little later still… the tunnel leads you to the inside of the crater! ->

So, would you climb down there? -> 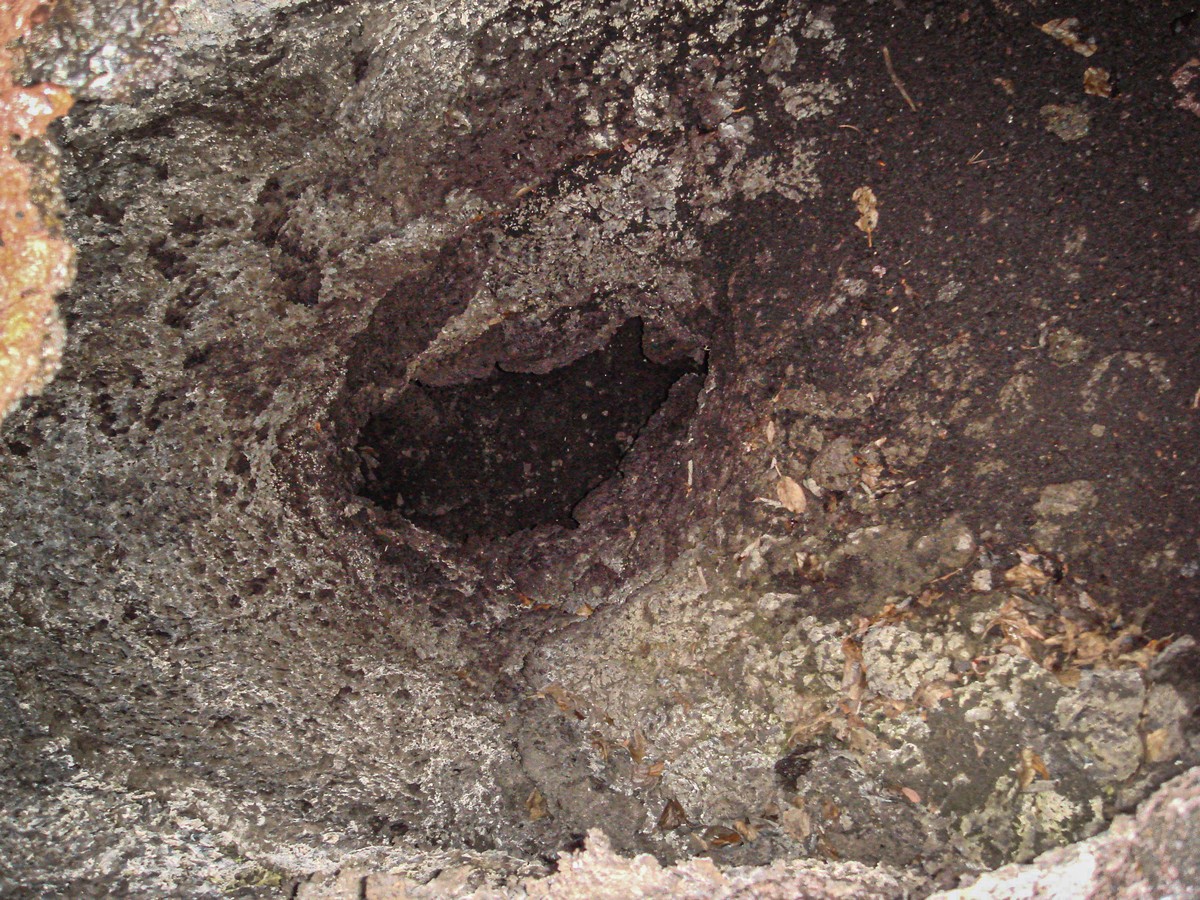 The walls and roof of the tunnels are covered in sharp drops of solidified lava, so make sure to wear something old that won’t be a shame to rip. And whatever you do – don’t forget to wear gloves!

There are larger tunnels, but they’re short, their roofs have long since collapsed in, and they don’t lead to the crater. Nothing to see there; move along!…

The views from the top of the crater – exceptional (given good weather:) -> 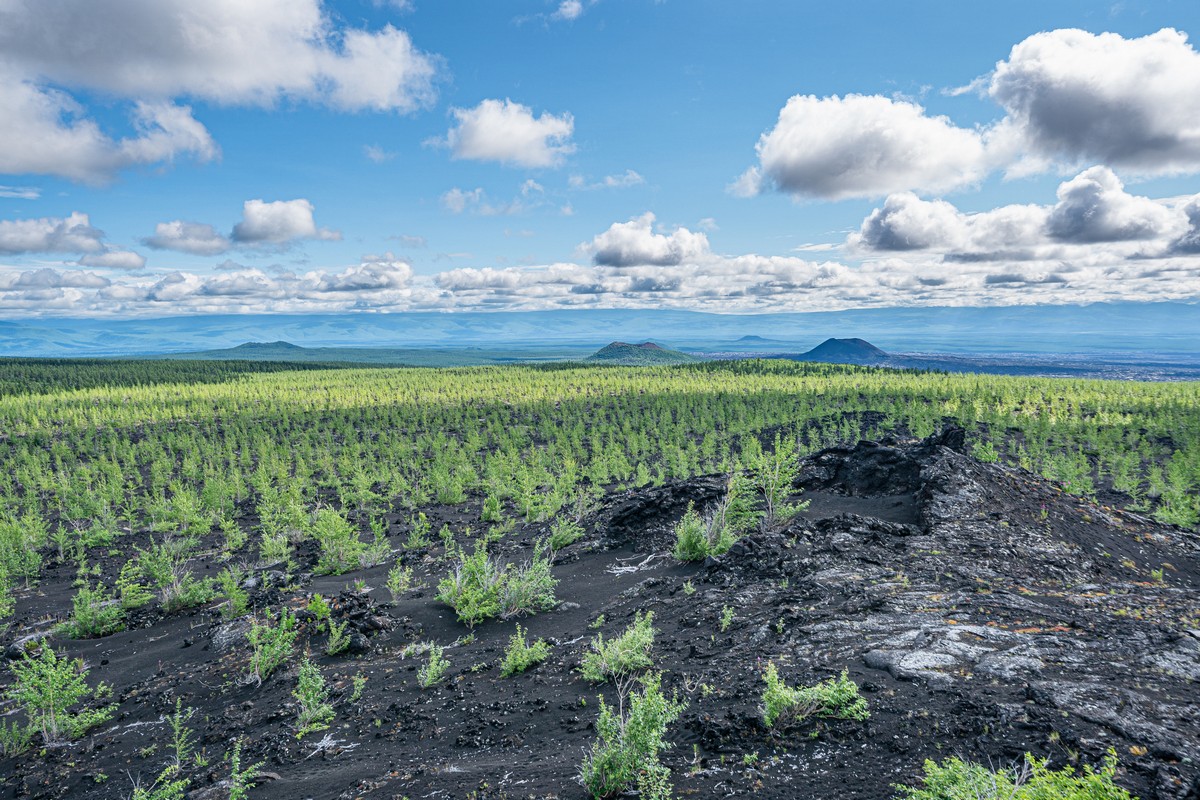 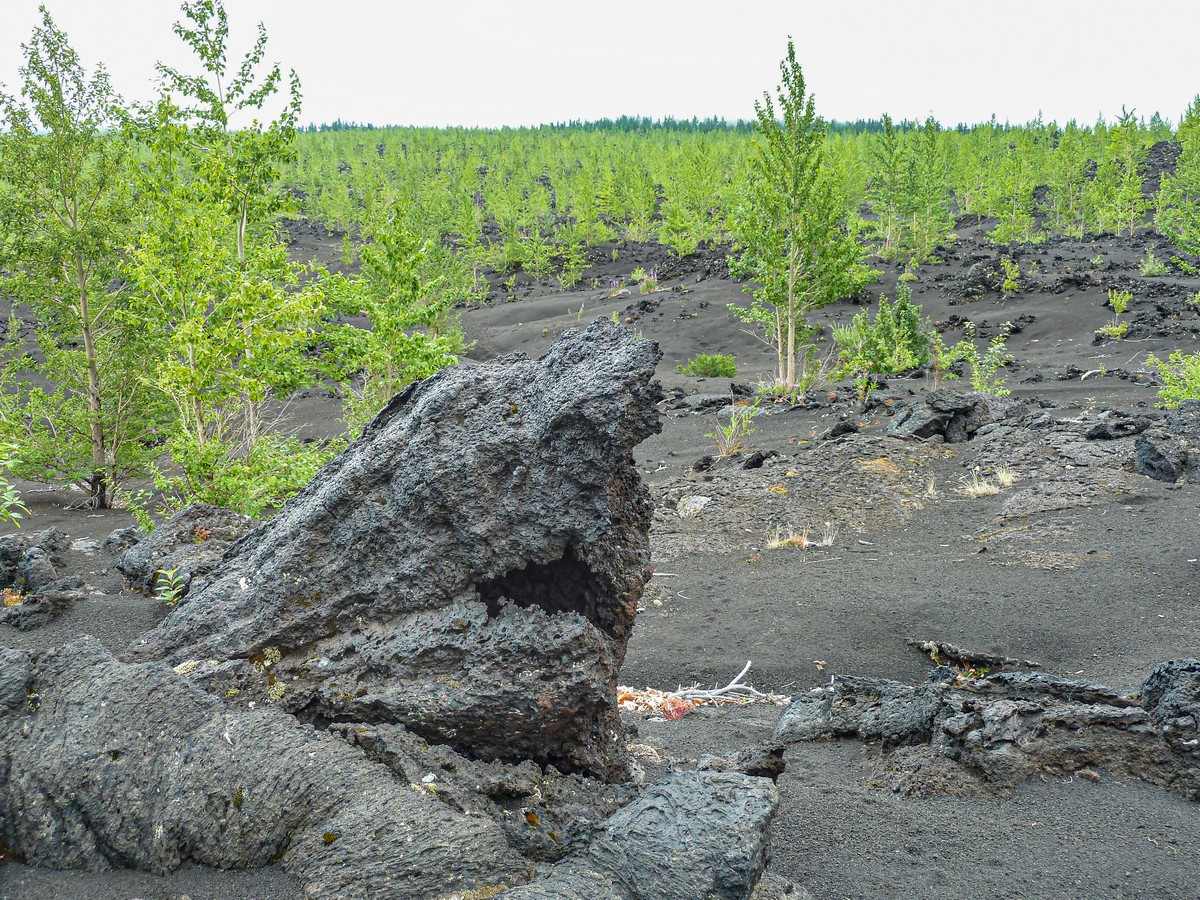 Here’s the exit from the tunnel into the crater. During the short spell of volcanic activity here a million years ago there was a lava lake, from which the lava flowed through tunnels that led off in various directions. Today only one tunnel is visible from the crater – there at hour-hand 4pm! -> 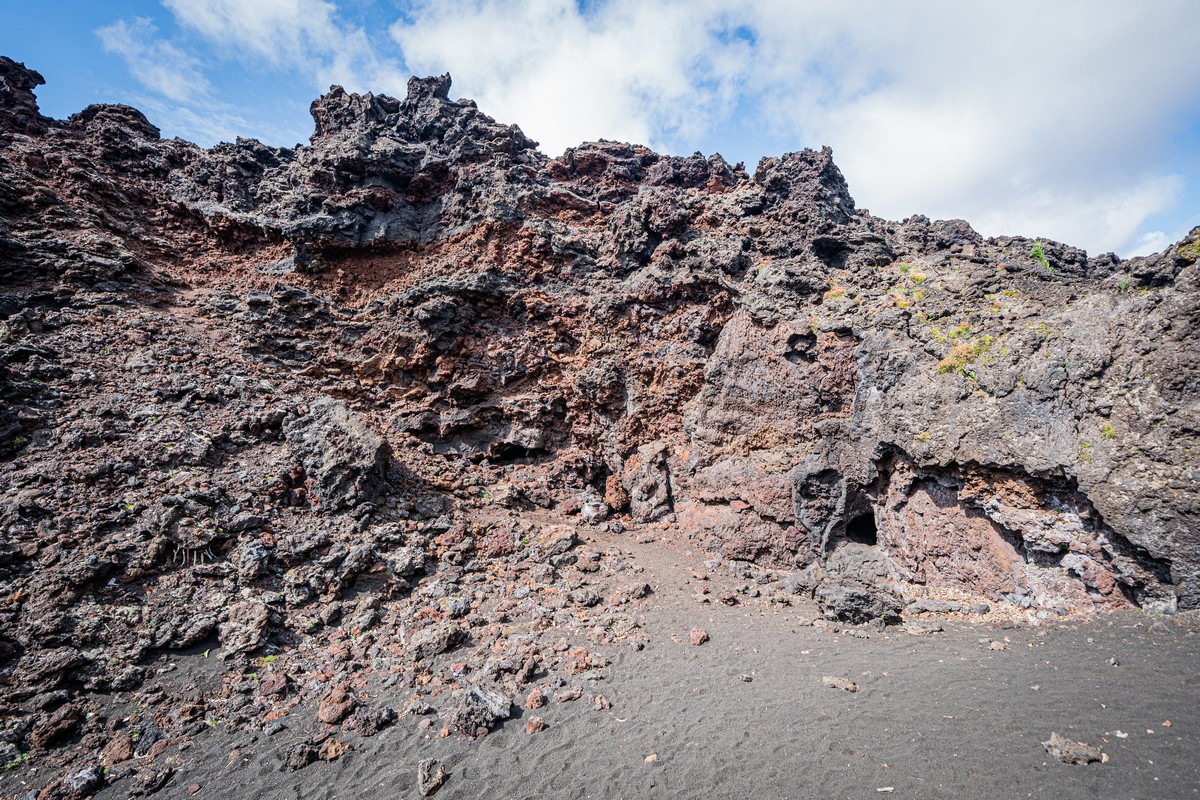 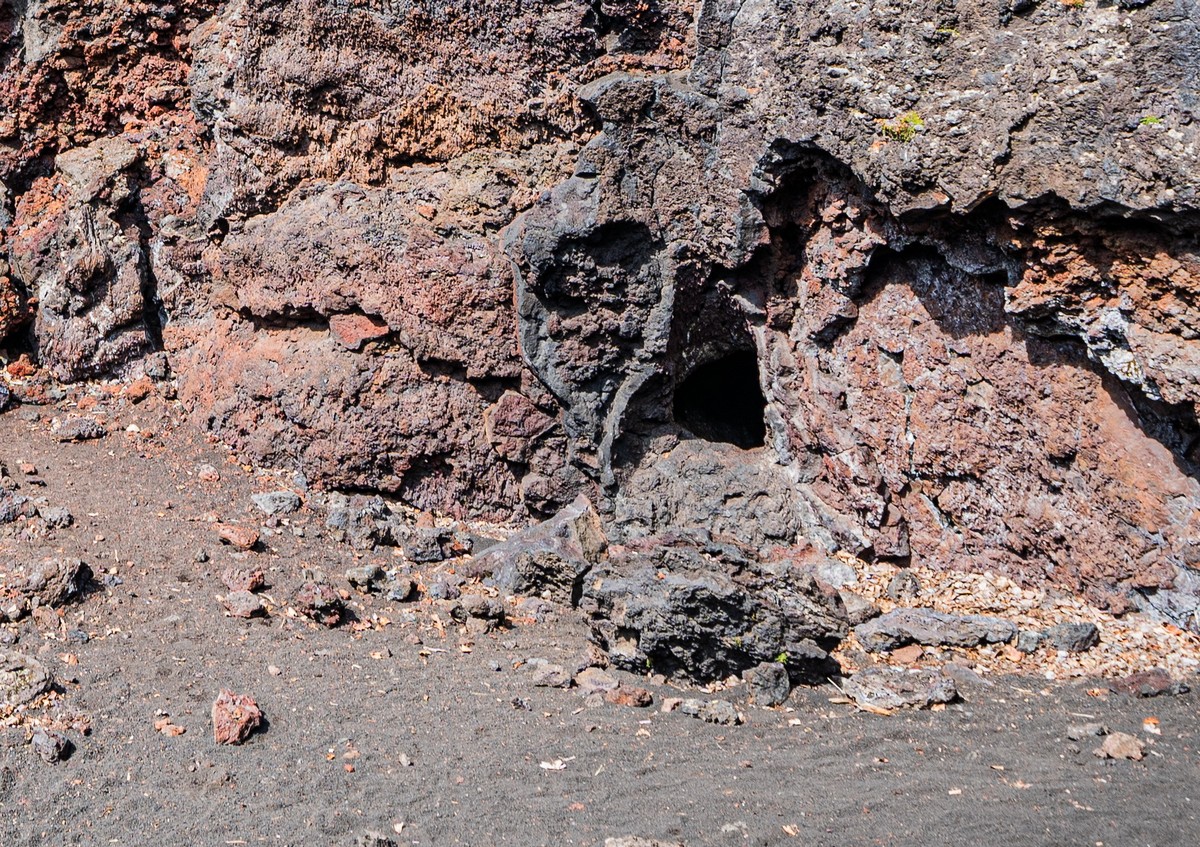 Some of the volcanisms here are curiously shaped. So of course tourists make them look even more curious, adding ‘teeth’ or whatever else their imaginations think fit! -> 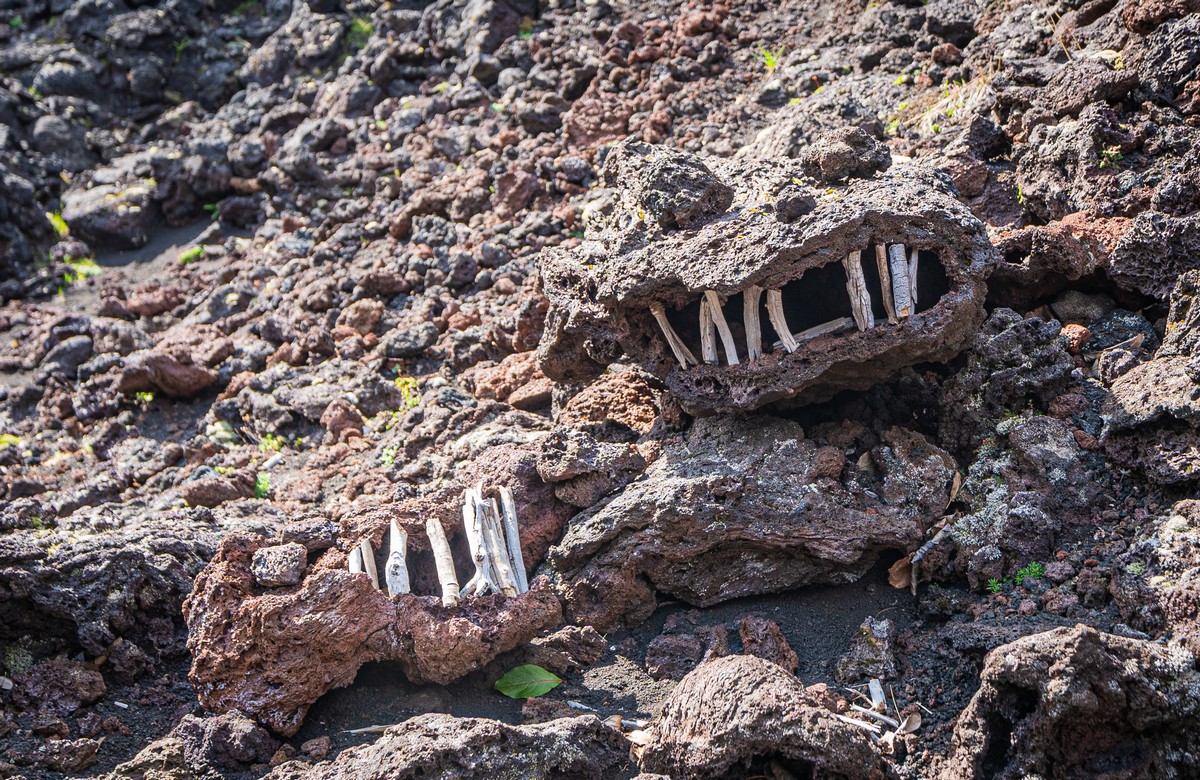 Next, if Tolbachik and its northern environs – particularly the Northern Fissure cones – aren’t enough, there’s more volcanism to check out nearby, at the Southern Fissure, five kilometers to the south of Zvezda. 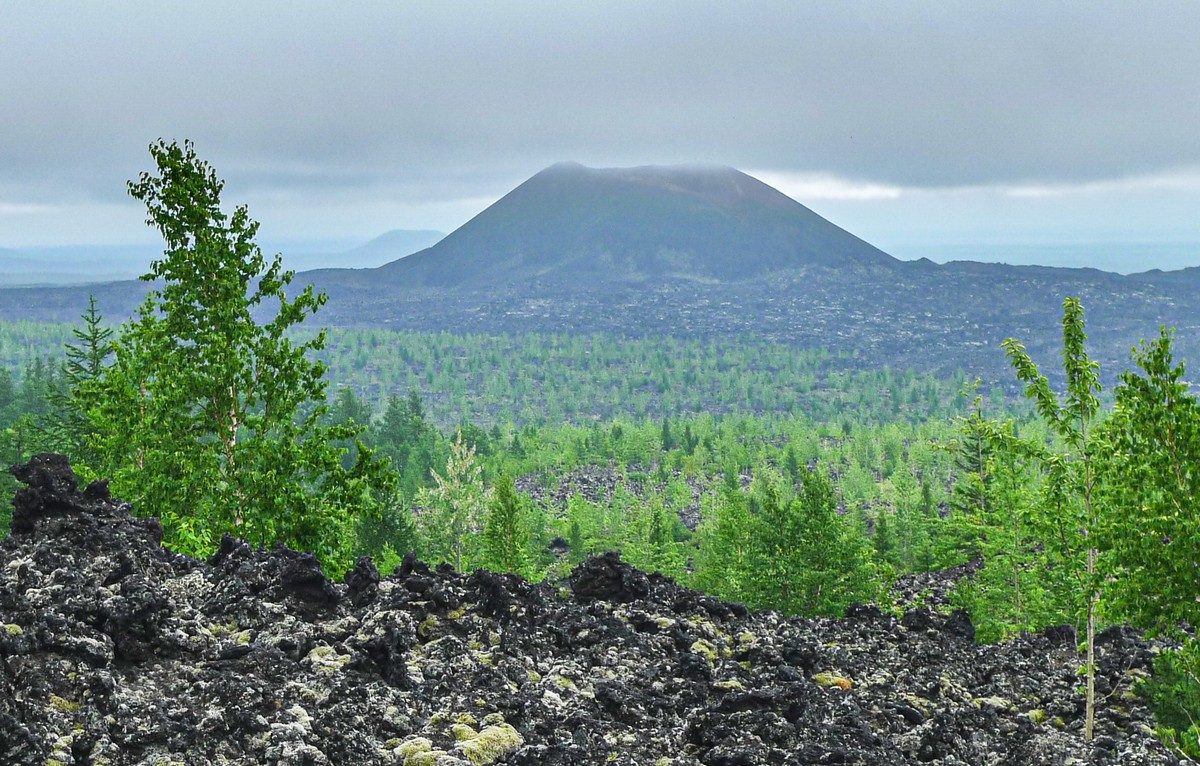 Nothing too interesting here. Simply a fresh cone (formed during the same 1975-76 eruption) encircled by lava fields: 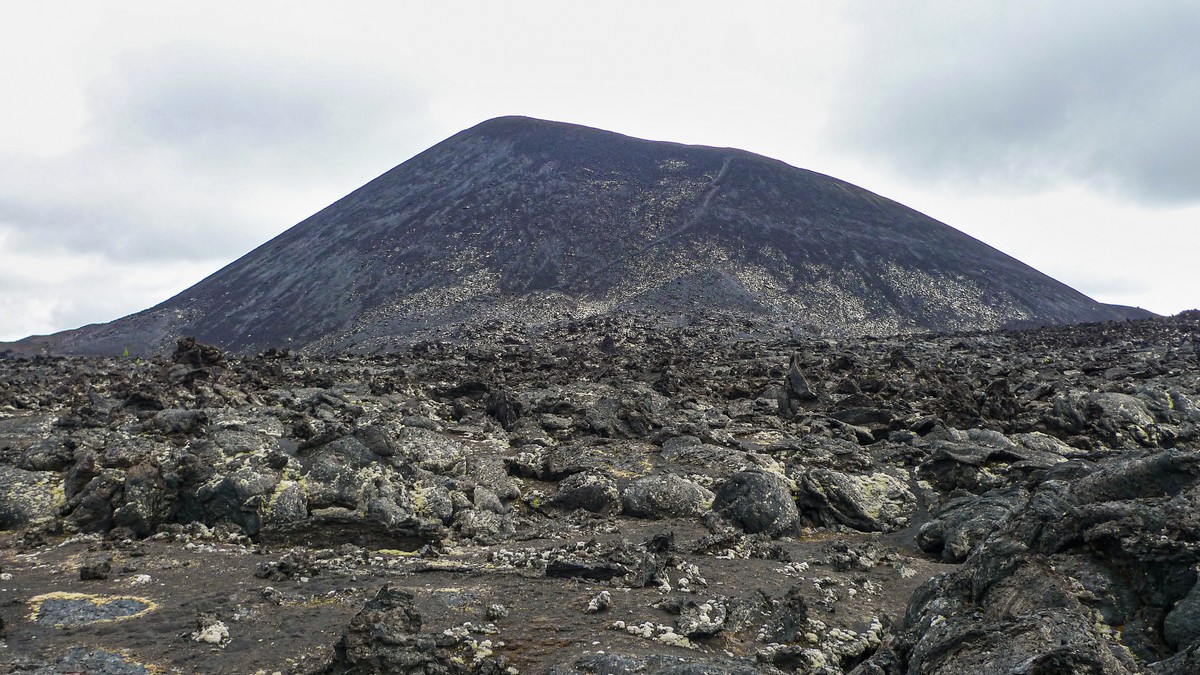 It gets more interesting when you take a walk up to the top of the crater, and then do a rim-walk, which, handily, doesn’t take long at all: 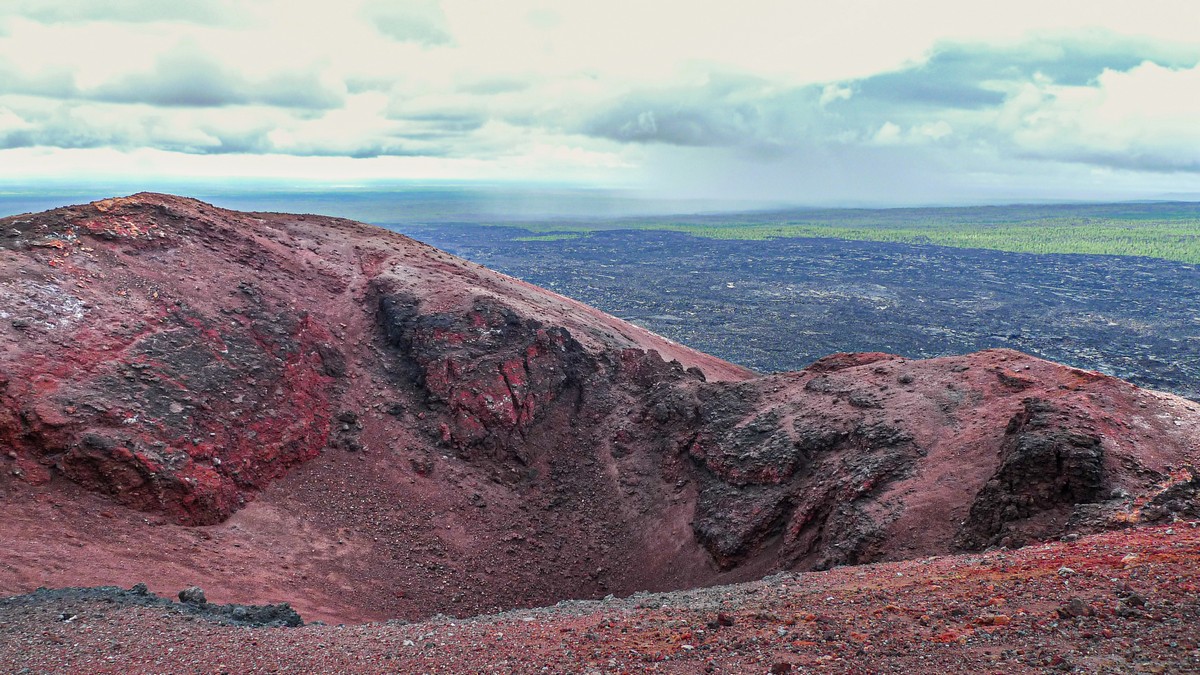 And that, folks, I do believe, is it for my Outer-Tolbachik report. Hope you enjoyed it. And hope you all get there one day too :).

The rest of the photos from the Kamchatka 2021 expedition are here.