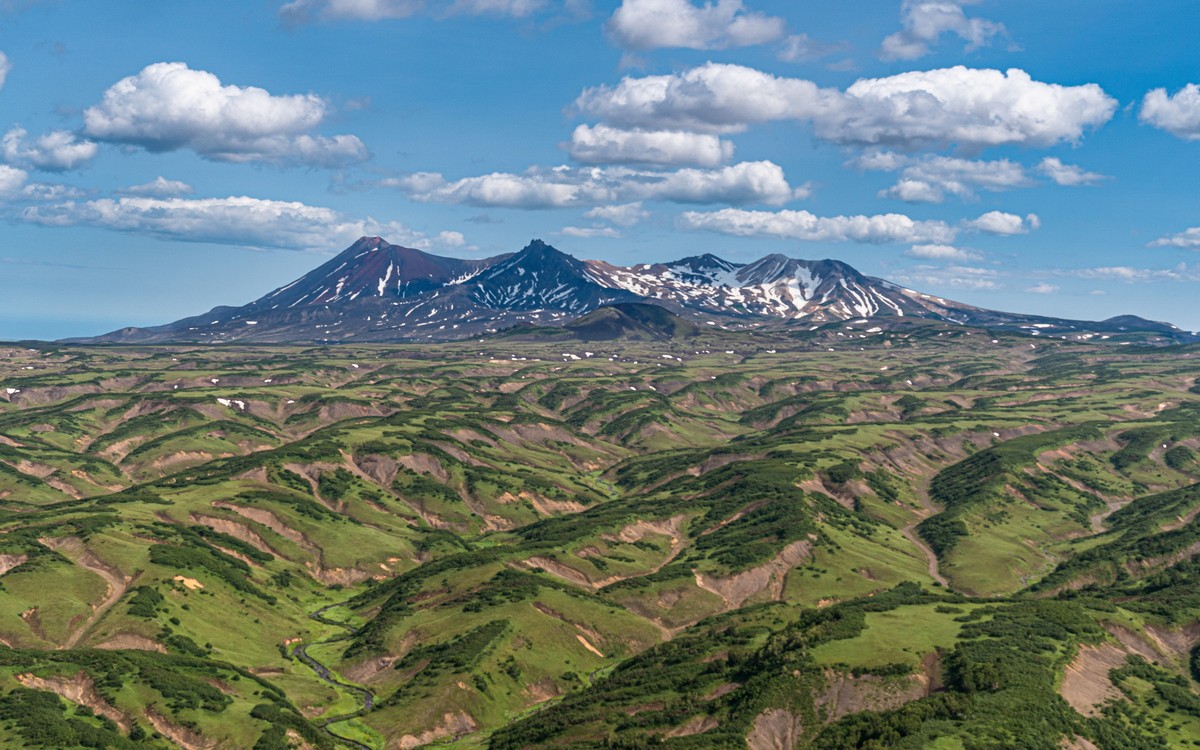 That was Krasheninnikov volcano on the horizon. 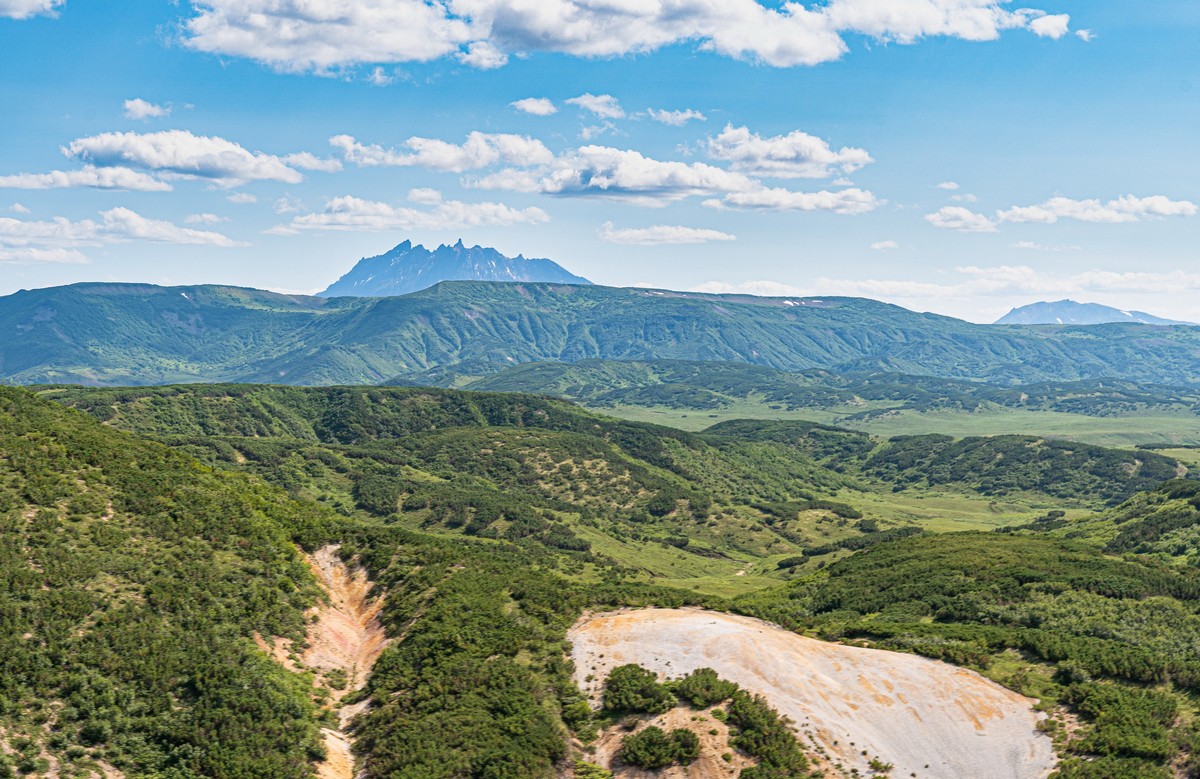 Those ‘teeth’ on this horizon – Bolshoy Semyachik.

Uzon caldera is the remains of an ancient volcano that was at one time three kilometers (!) tall. It erupted multiple times, and then collapsed – as do many ‘tired’ volcanoes, leaving a colossal caldera – this large blob, which is around 9x13km! -> 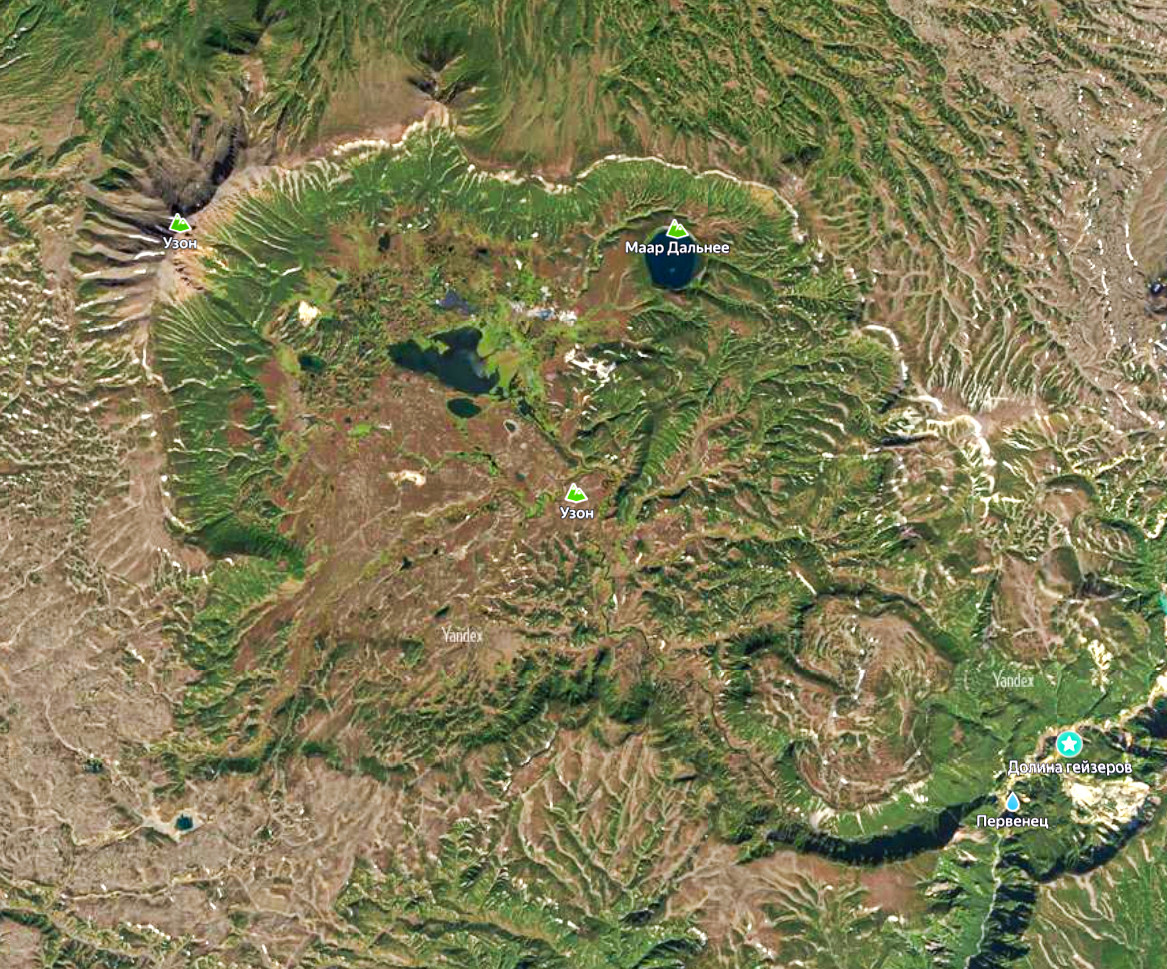 Here’s the view up close: 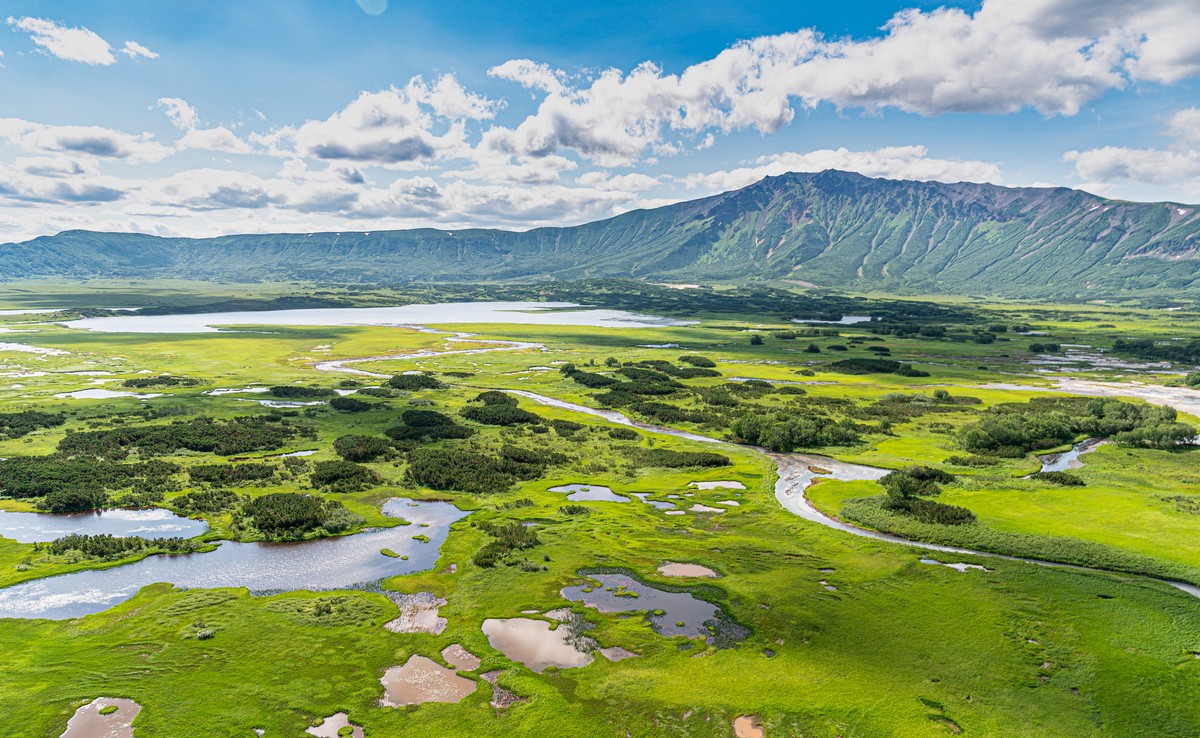 See what looks like a long mountain range there on the horizon? That’s actually the inner slopes of the ancient volcano. In a word: humungous! 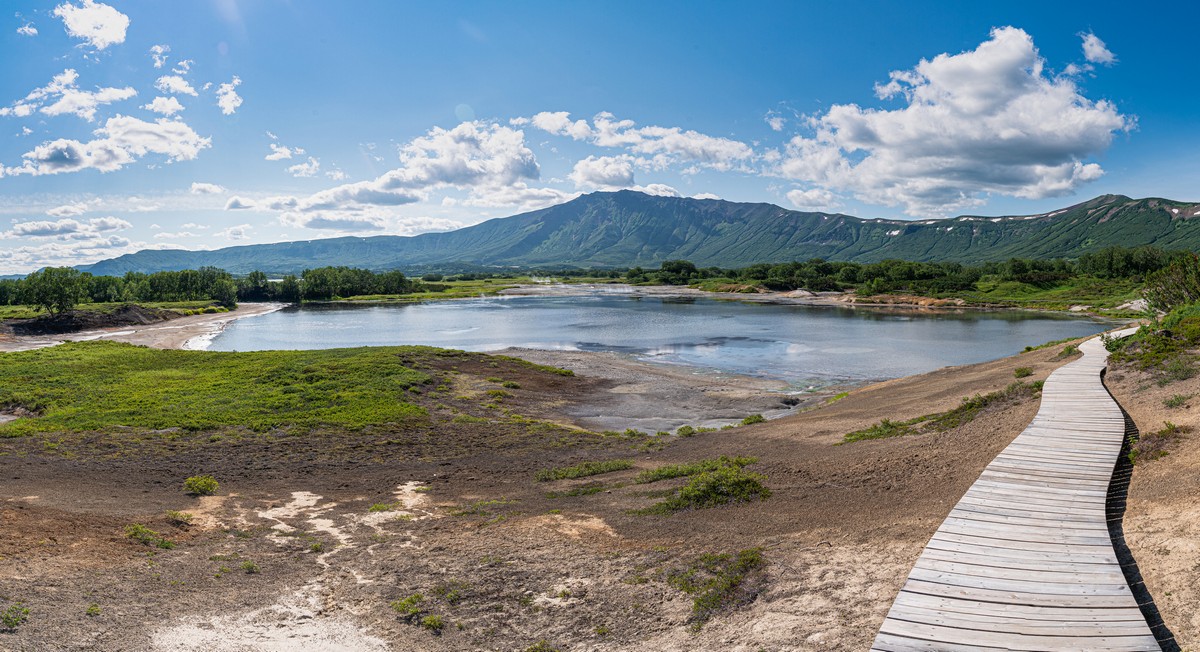 Those fangs of Bolshoy Semyachik again…

Mother Nature, eh? First build it all up, then destroy it all, then have it burp and gurgle ad nauseum. Mother Toddler, more like ). Btw: in these pics, the just-mentioned mud-burpers! 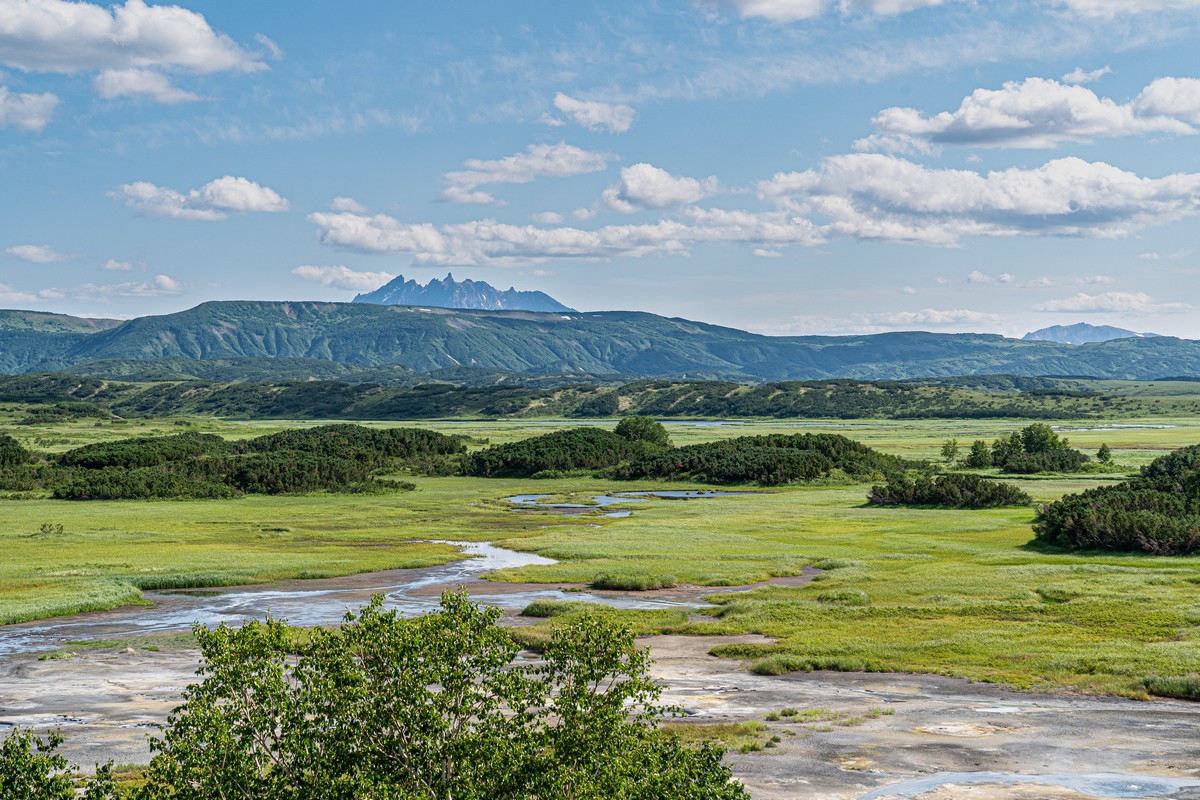 This lake – all serene and placid; the water in it – super fresh and clean. But it wasn’t always like that. It’s called Maar, which comes from the German term for the result of a short but extremely violent explosive eruption. 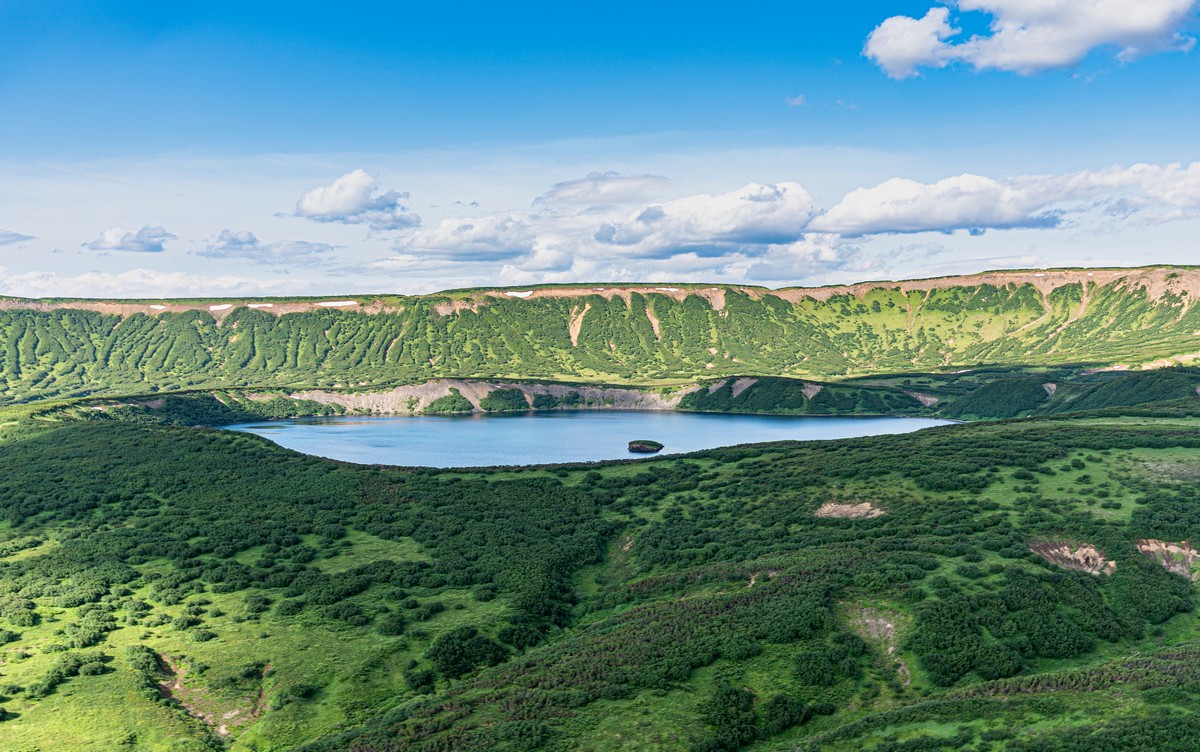 Now for a walk inside the caldera!… 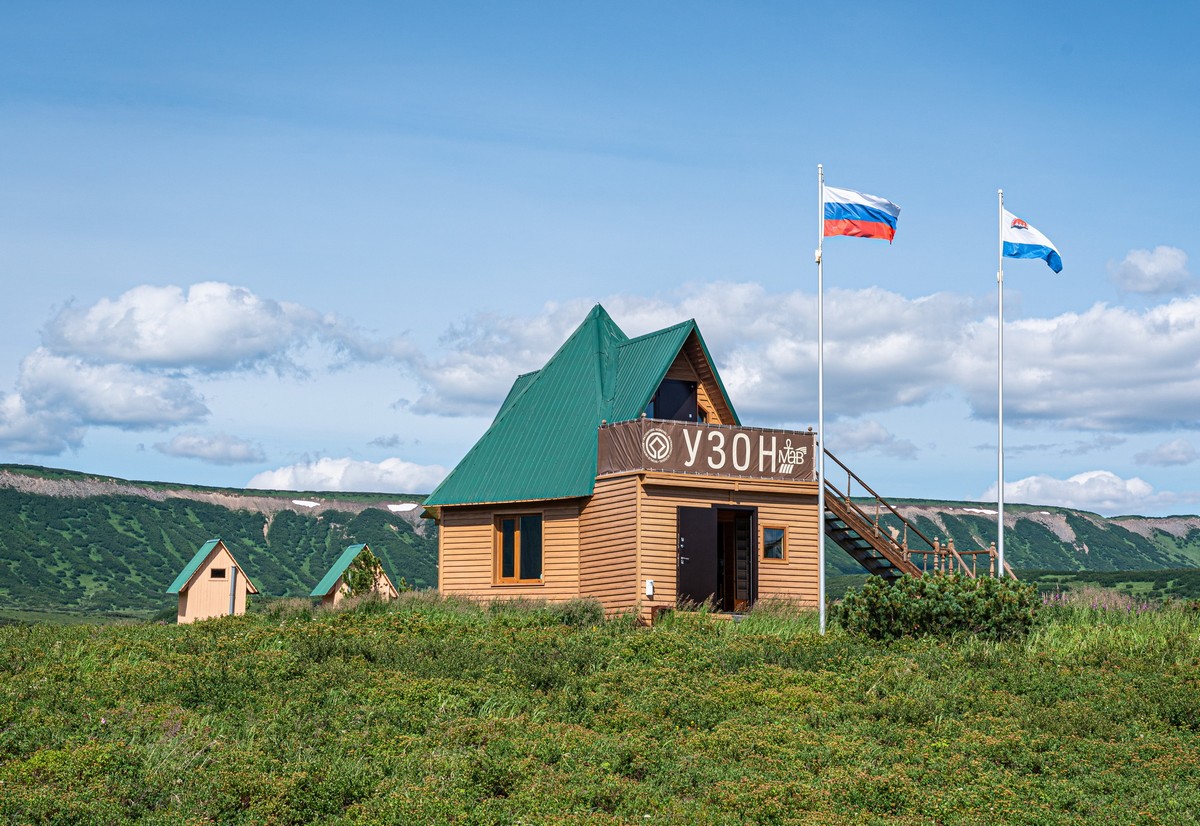 The caldera is something like a chemicals factory! It was the same last time. Indeed, nothing much has changed here since when I last wrote about it, in 2012, apart from it becoming more tourist-friendly (e.g., the new huts; and – see later – new elevated paths).

They say the colors here are best viewed in the fall, once the trees’ leaves turn red. But the colors in summer ain’t bad either!

What makes the place uniquely funny are all the sounds you hear. The hissing, the gurgling, the plopping; I’ve mentioned the burping, haven’t I? Wait, no: not just the sounds; the smells too – pungent, acrid, sharp, stinky! Very chemically – signaling that deep underground here there’s some serious periodic-table mixing and admixturing and sublimation and all that.

Check out this here… body of water. But let’s face it, how much of it is H₂O? I don’t know, but I’m not drinking it to find out! 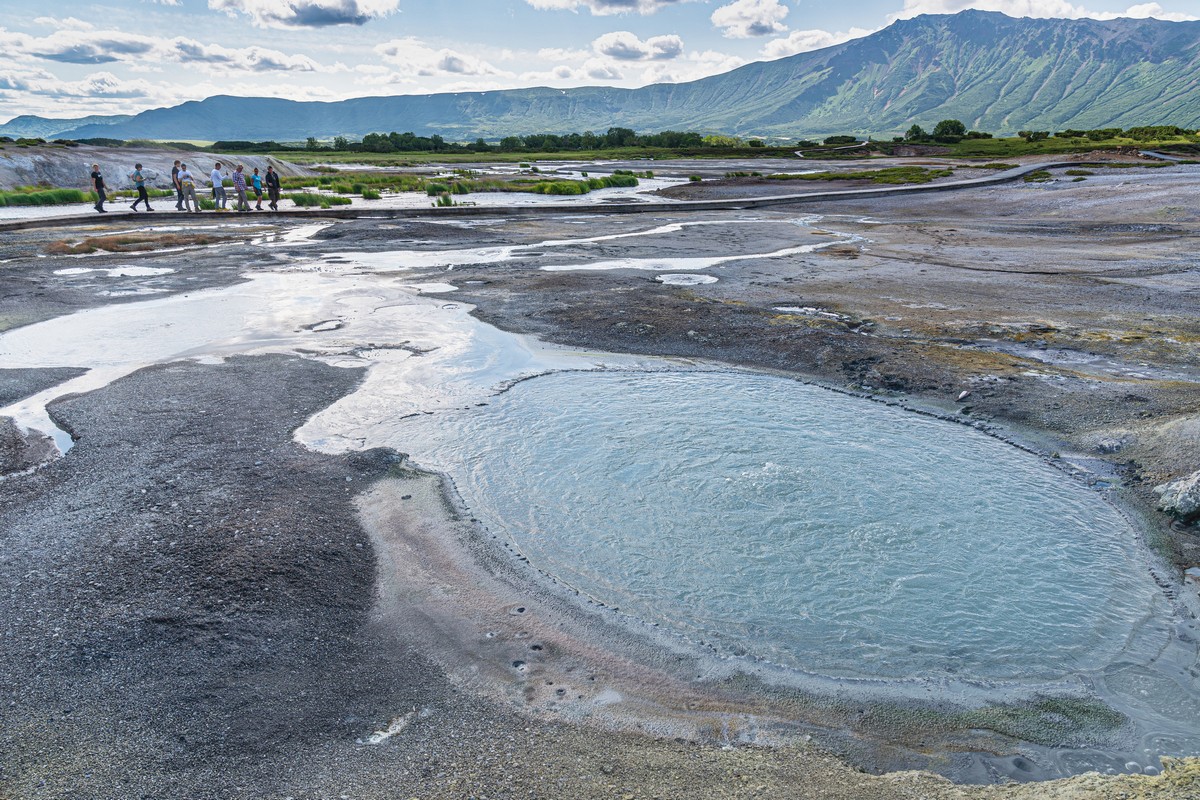 Look at this lot. Clearly, not to be walked upon. Who knows what injury you may get. Good job they’ve installed more of the elevated paths ).

Here’s more mud-spa water that shouldn’t be bathed in. It does look inviting, mind… 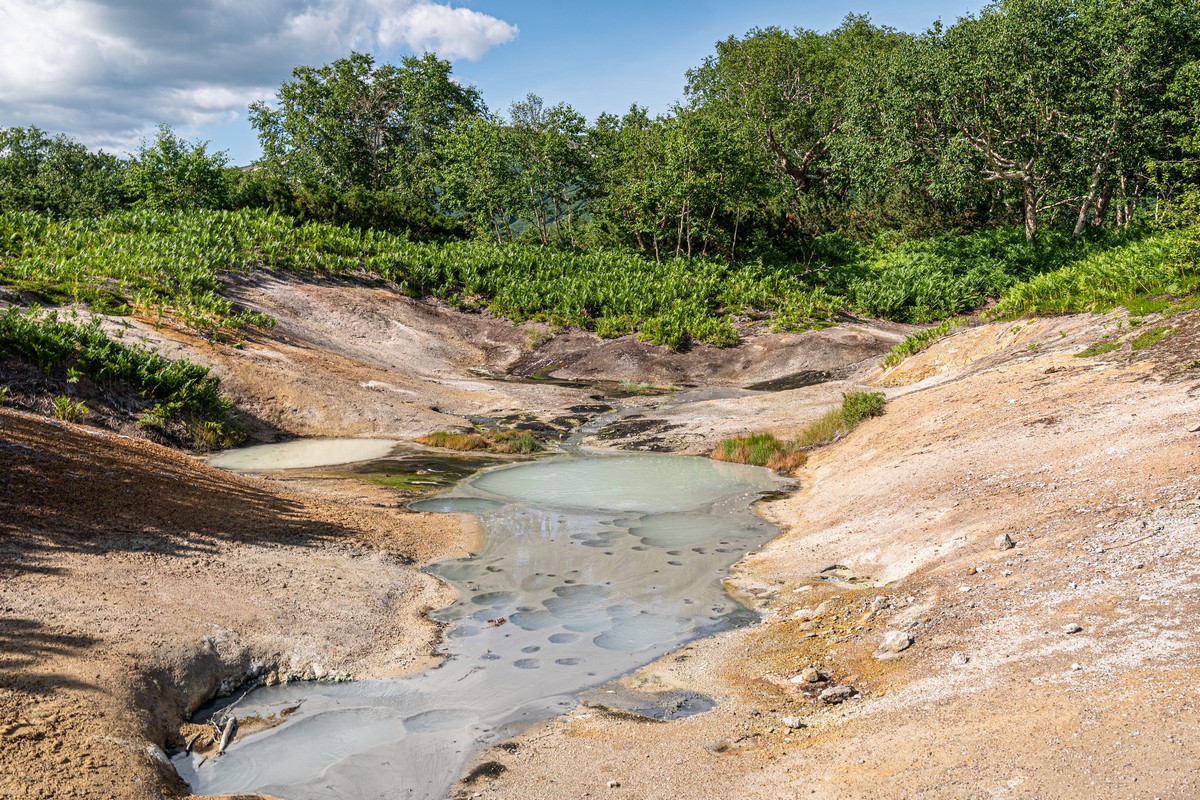 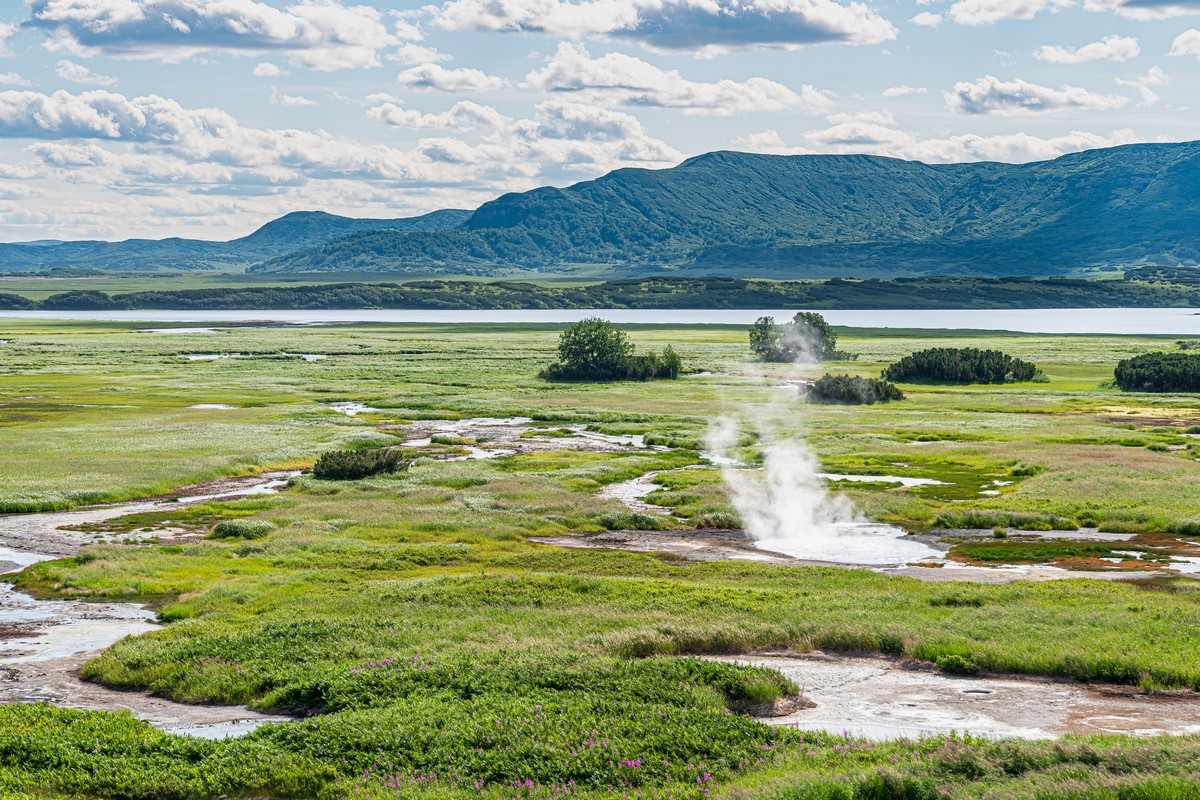 There’s a lake near here that’s mostly… sulfuric acid! Our guides told us how a big chunk of metal – say, a bicycle – thrown in it would be fully dissolved come morning without a trace ). 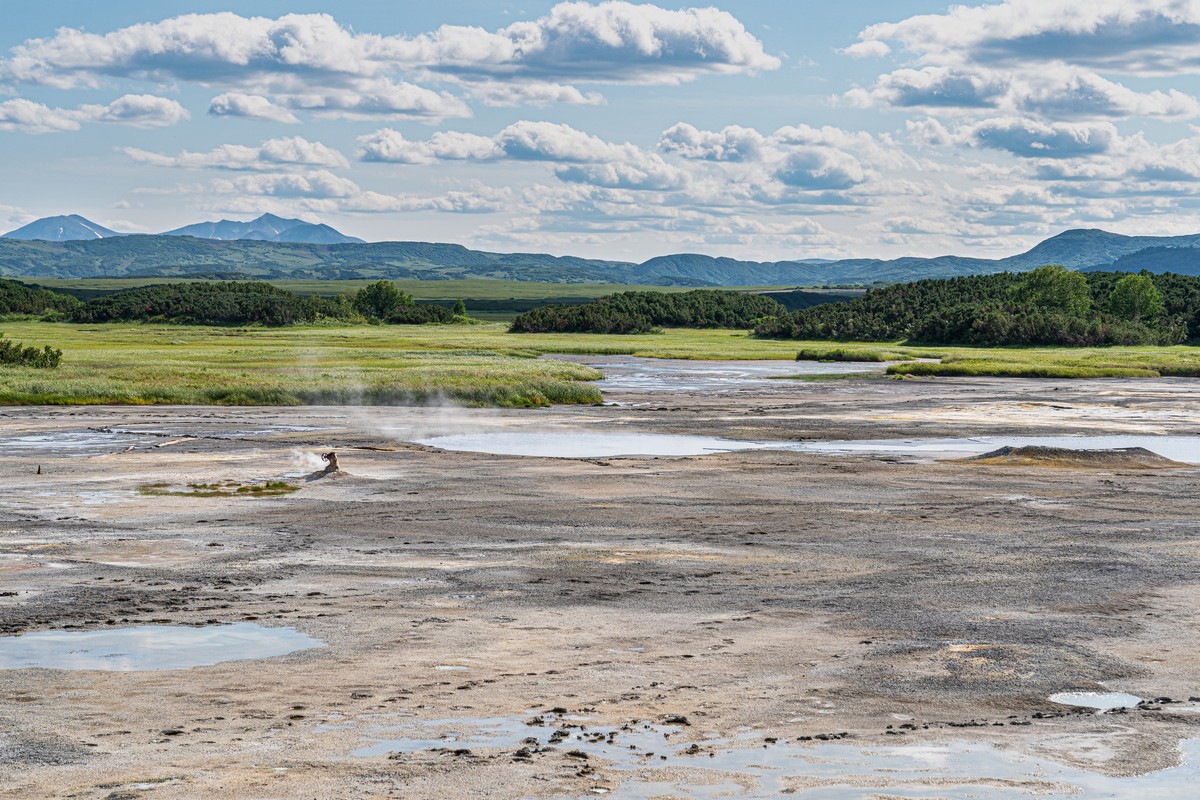 But judging by those paw tracks, the bears don’t seem to mind the high pH levels around here!

We were told how the bears know where the safe, restorative spa waters are, and which ones to avoid. So they come and bathe their aching limbs and cuts and sores. Clever things!

Always keep to the path! Who are we to argue?

Elevated viewing platforms. Whatever next?… 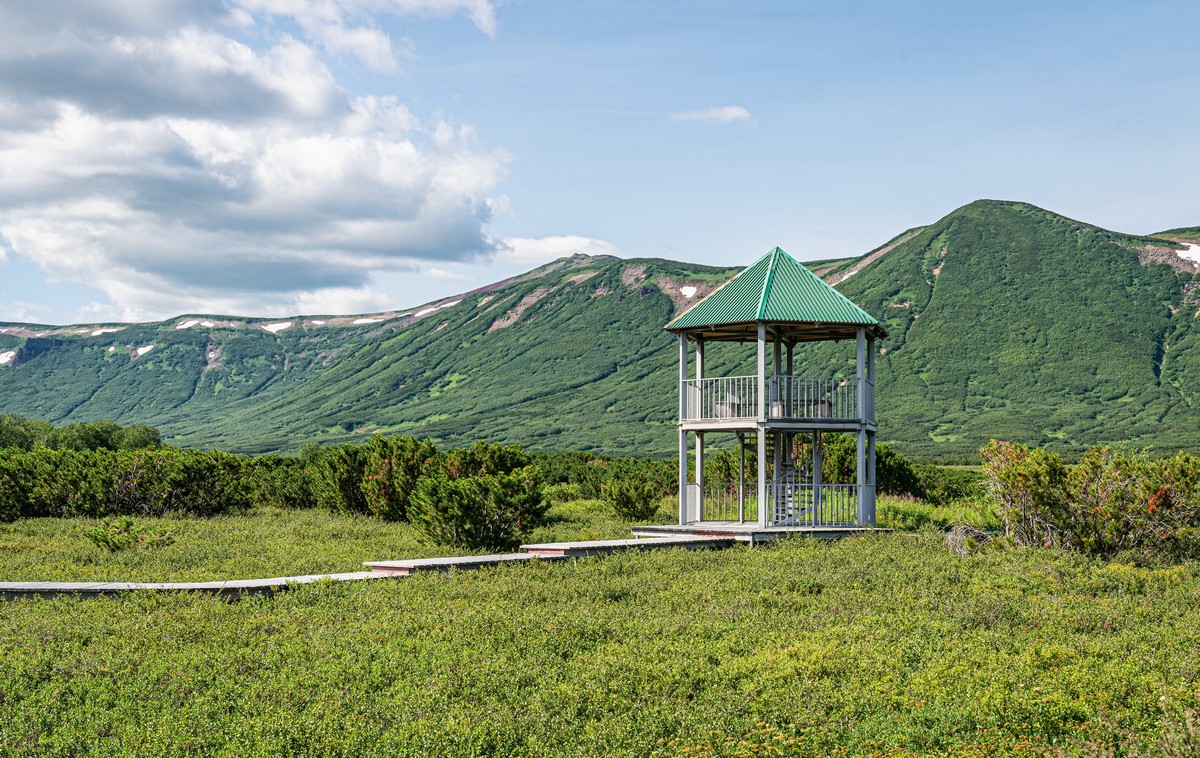 Aha – a geyser. I’d never seen it before. They have laid a new path to pass it. Didn’t see it last time. 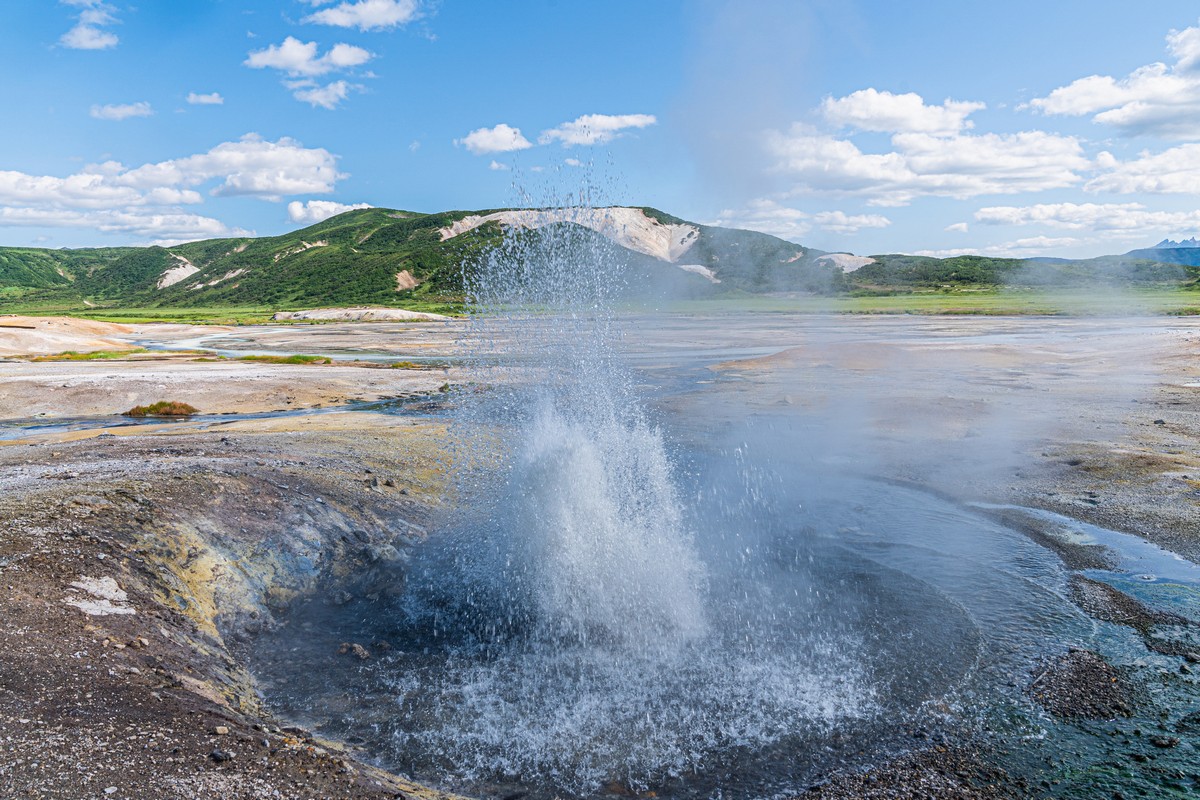 This Uzon geyser does its splashing dance twice, then calms down for a while, then twice again, over and over infinitely!

But it was time to head back to the helicopter to fly on to the Valley of Geysers, which is part of the standard tourist-helicopter route here. But more on the Valley in the next post…