Sunset views of the Klyuchevsky group of volcanoes – done.

Aerial views of same (from a helicopter) – done.

The route went something like this: heading southwest, and then west around Bezymianny volcano – known for its catastrophic eruption in 1956, which led to powerful pyroclastic flows (for those wondering what they are, and interested in learning about different types of eruptions – check out this link and other links below, included specially for the curious types among you).

And here she is – Bezymianny (Unnamed). The view from the southeast, which was the direction of the lateral blast of the eruption in 1956: 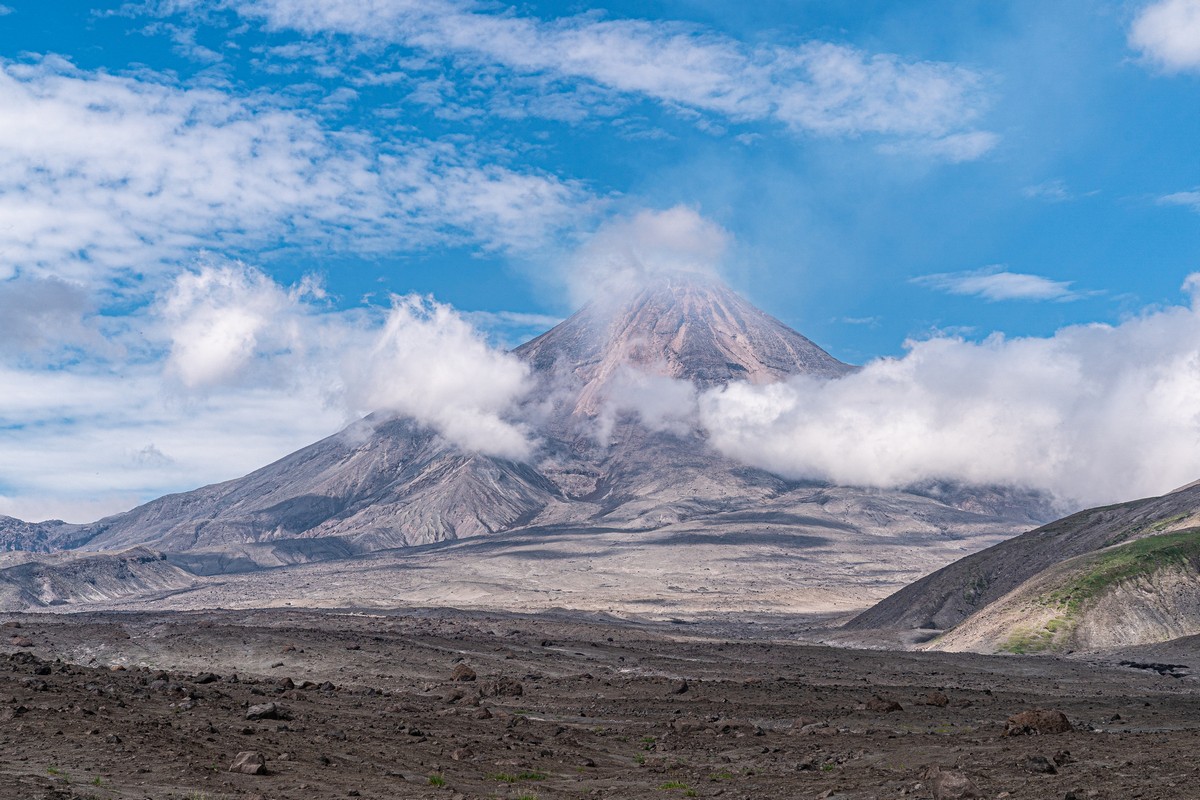 Though it’s been a full 65 years since that explosion, there’s still no vegetation on the volcanic landscape here today. The material spewed out of the bowels of the earth is probably simply too poisonous with assorted volcanic chemicals (too alkaline, or too acidic, or too much of this, that or the other…). 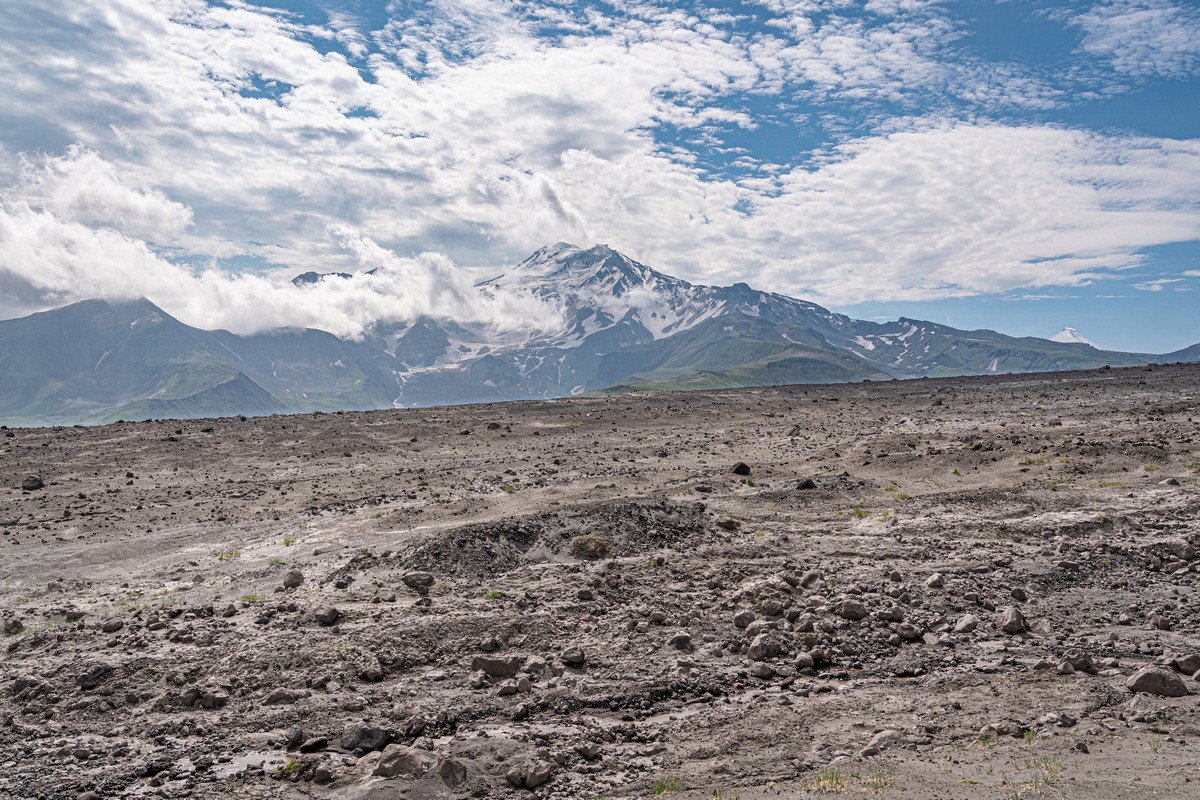 Rocks, rubble, dust, slag and assorted other volcanisms – all of it from either the main eruption of 1956 or the lesser ones since. 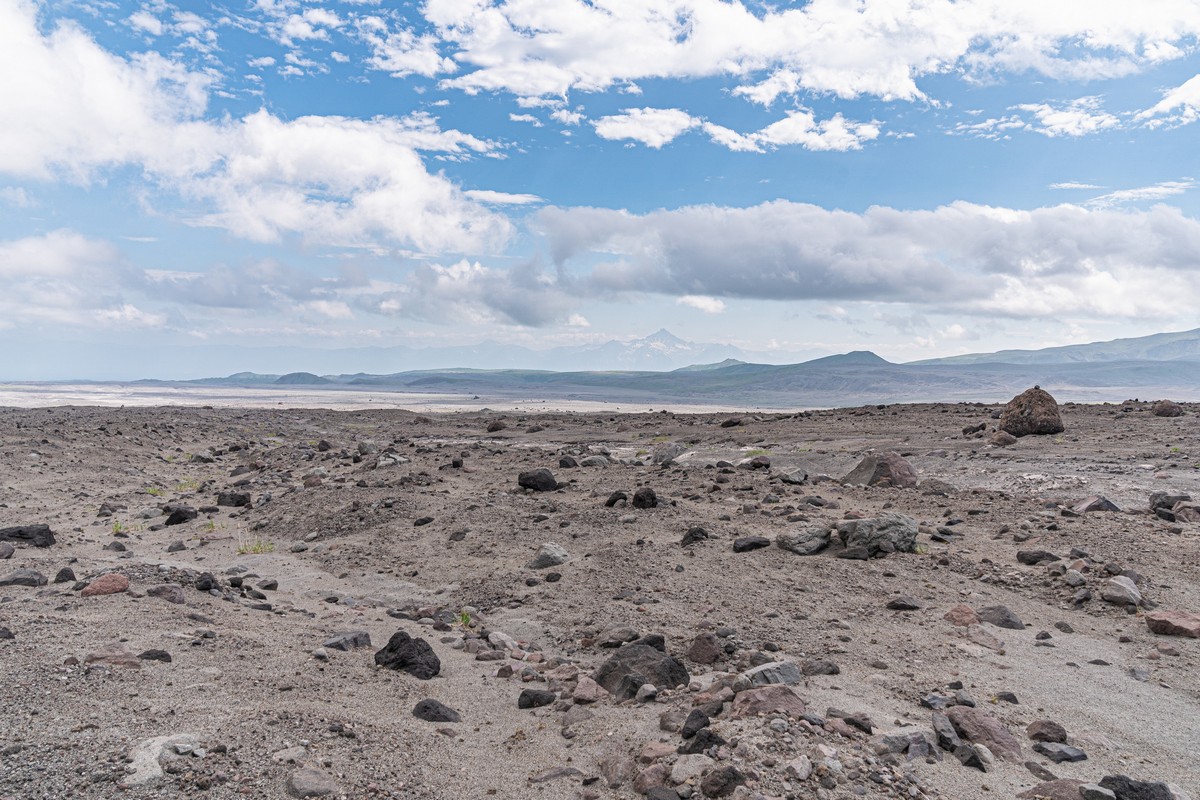 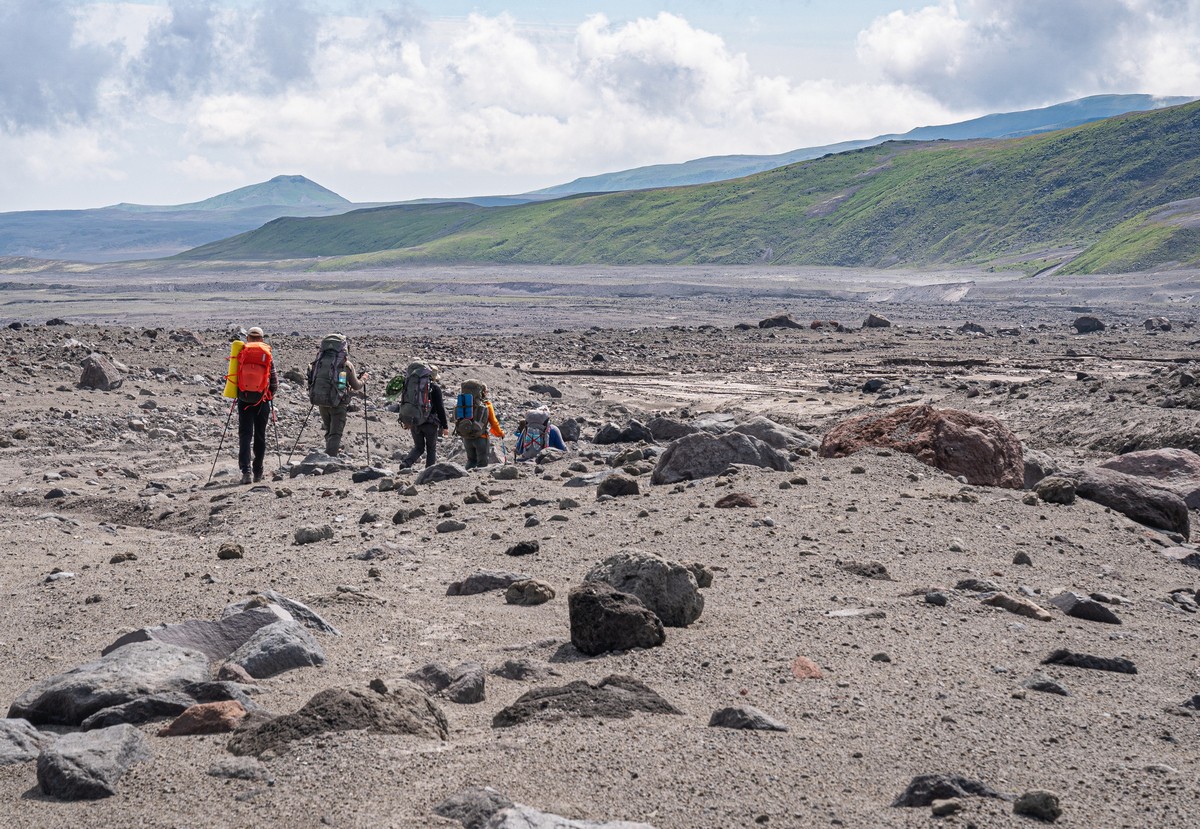 Here’s the view of Bezymianny from the side of the main lateral blast. When it occurred, megatons of red-hot stones, gas and other caustic volcanisms rained down here at incredible speeds. Here are more details of that eruption. 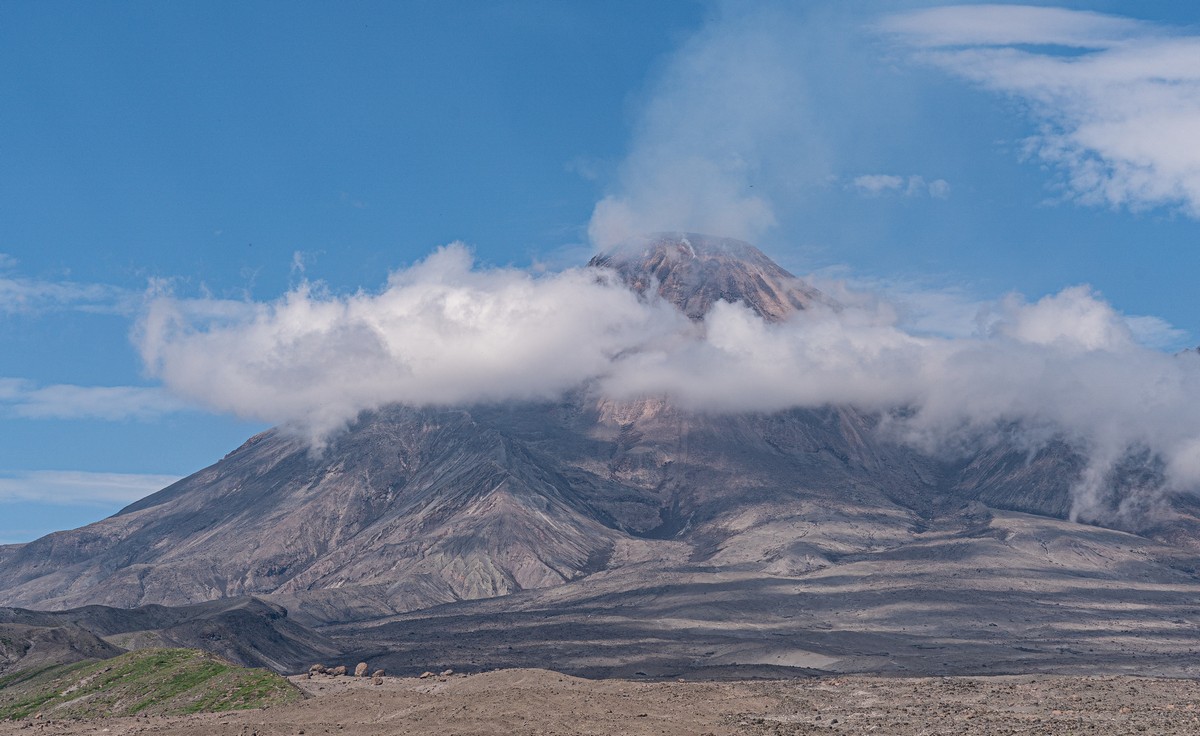 To be honest it was a little unnerving walking around here, since, sooner or later, it’s going to… explode again! What if it had decided to do so while we were trekking past it?! I wonder if this was the reason our tempo across this rubble-and-slag-strewn stretch was quicker than usual? ) 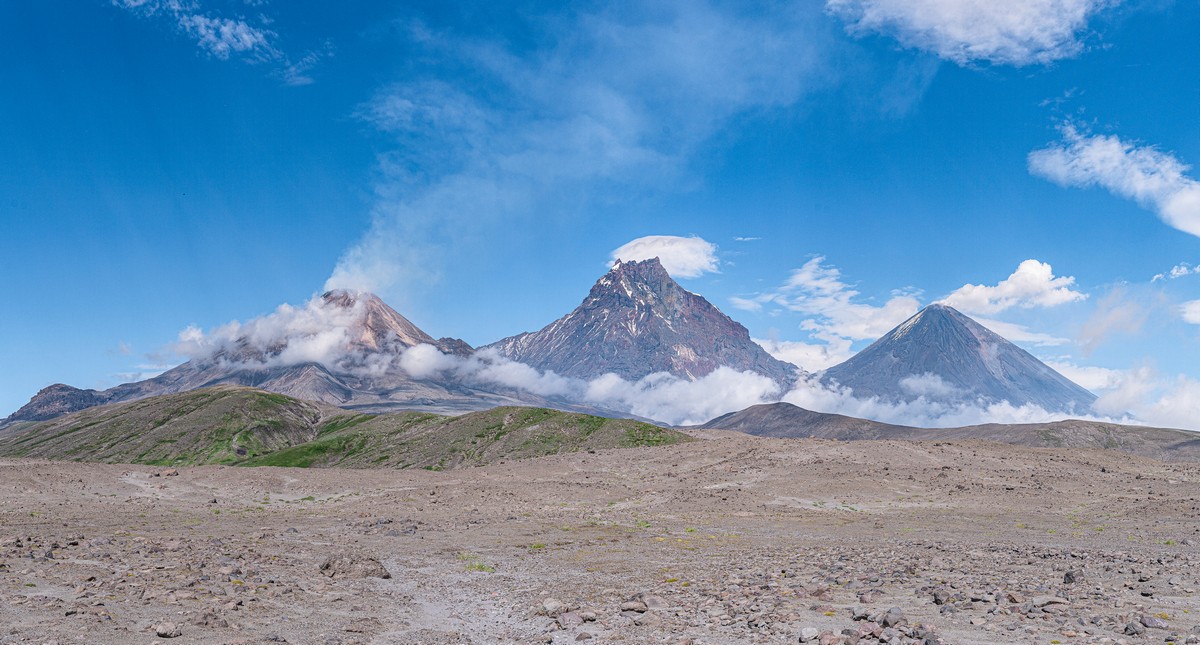 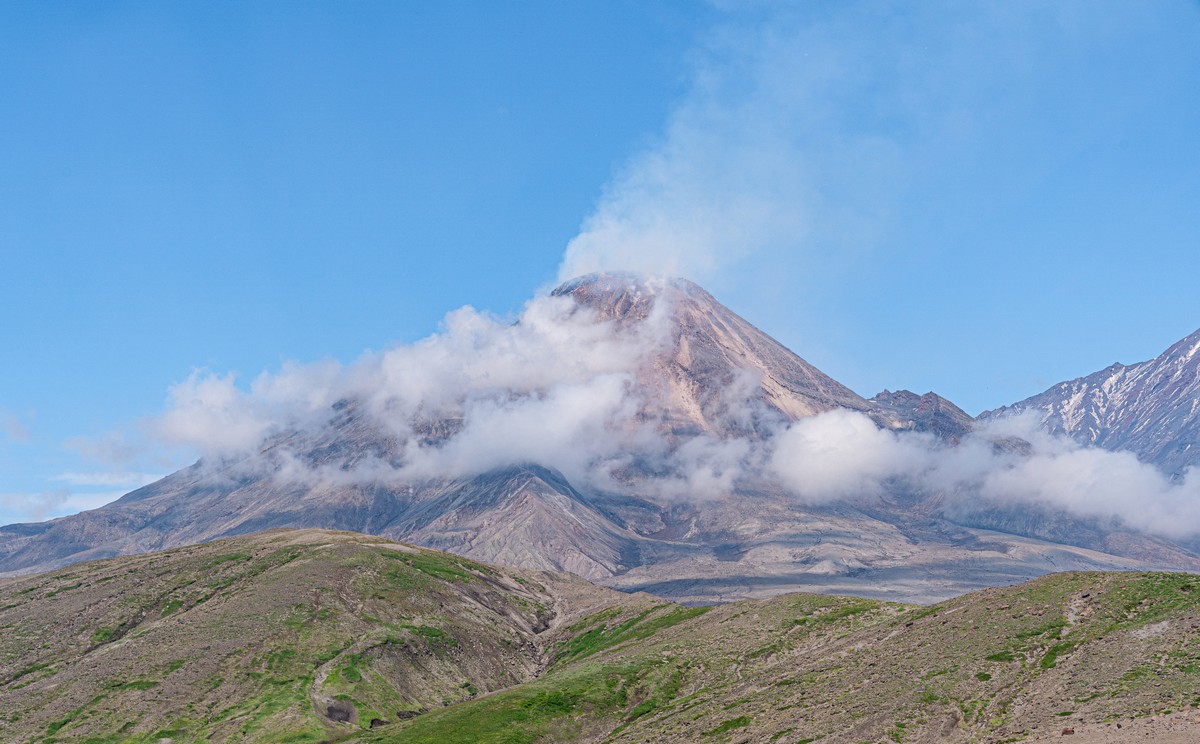 Kamen (Rock). Couldn’t have named it more appropriately and straightforwardly myself ) -> 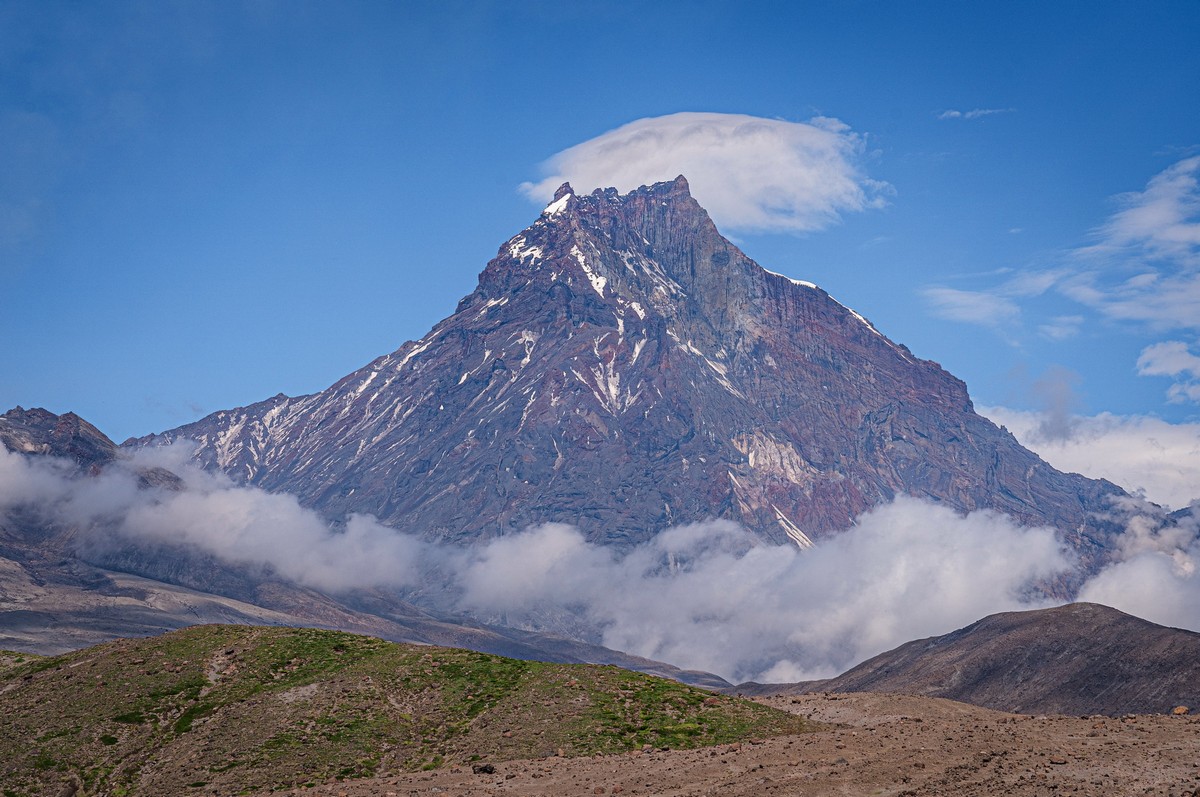 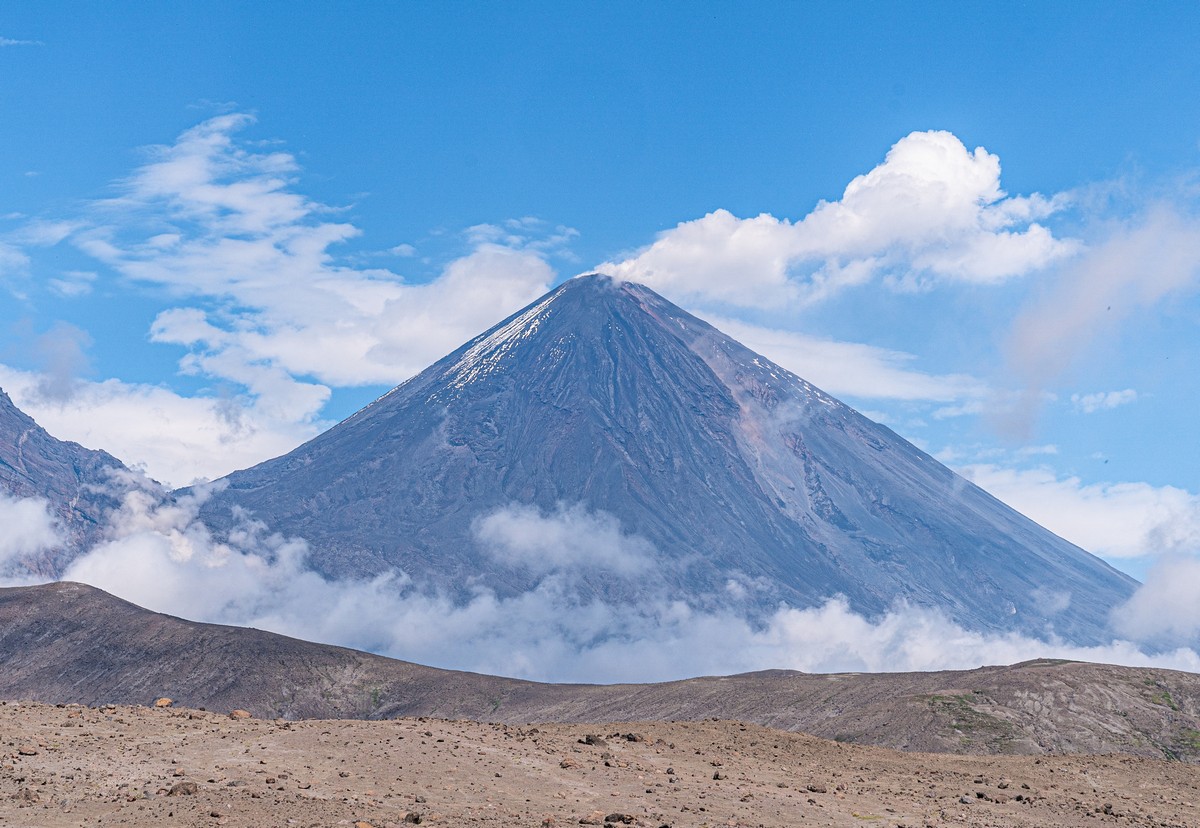 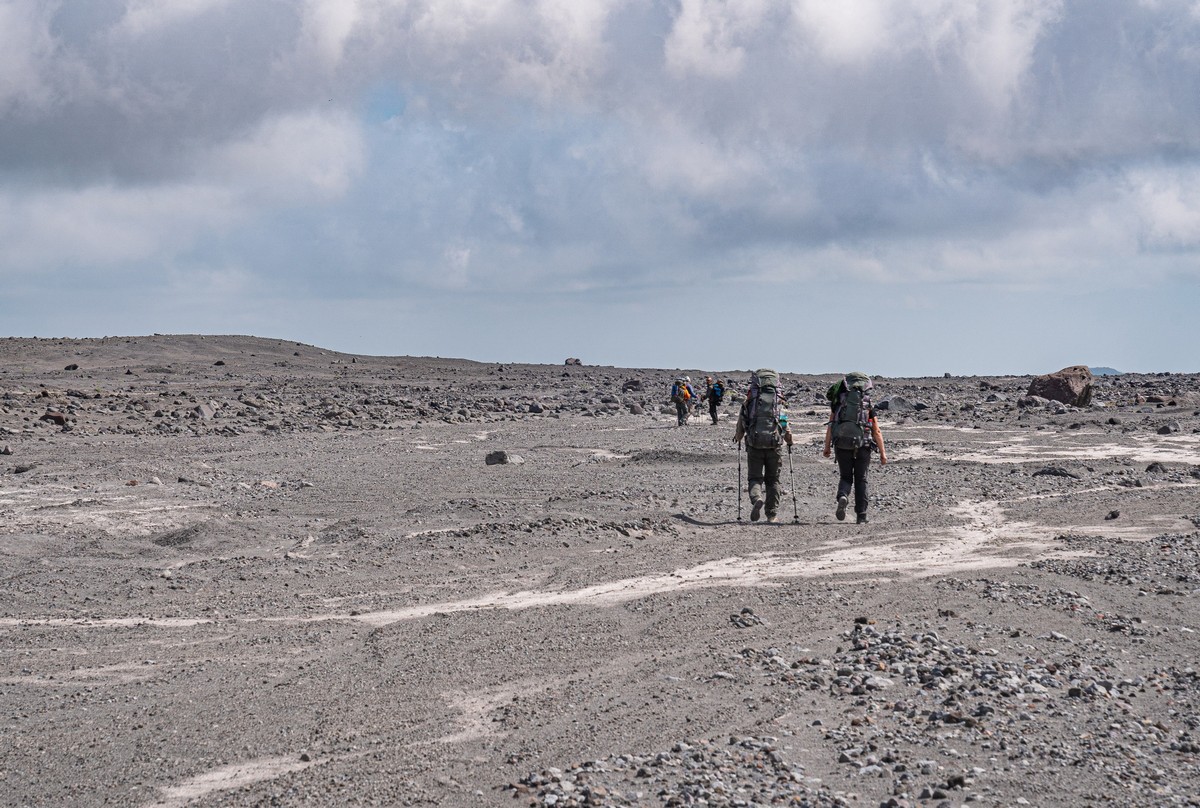 // Actually, if you look carefully, you’ll see that on these photos we’re walking back. Indeed, we trekked eastward from Bezymianny, then northwest. But I decided to turn the narrative back-to-front here to ensure a certain smoothness of the presentation. 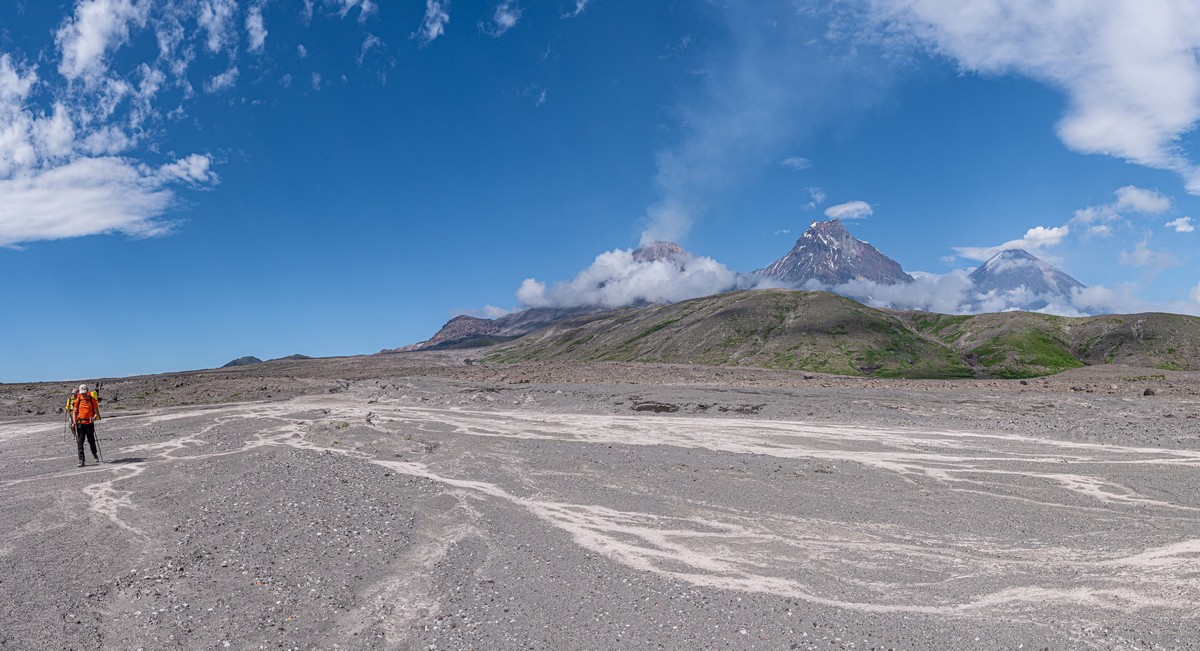 A super trek! Views to… die for – possibly. Mind-blowing; mercifully, not literally ).

But to get those views, you’re walking the whole day. And… there’s no water at all anywhere! So if you do ever get here for such an all-day trek, make sure to take plenty with you (or have it dropped to you from the helicopter you came in (the VIP approach:). 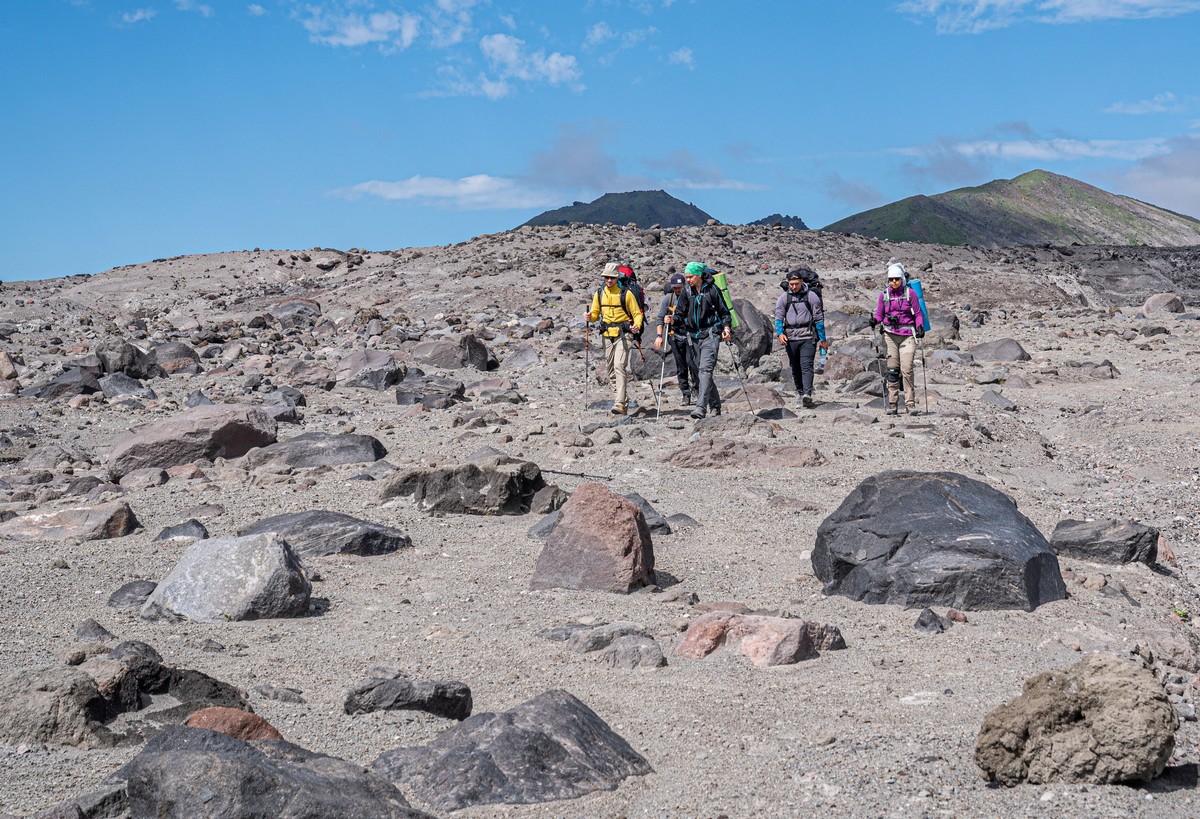 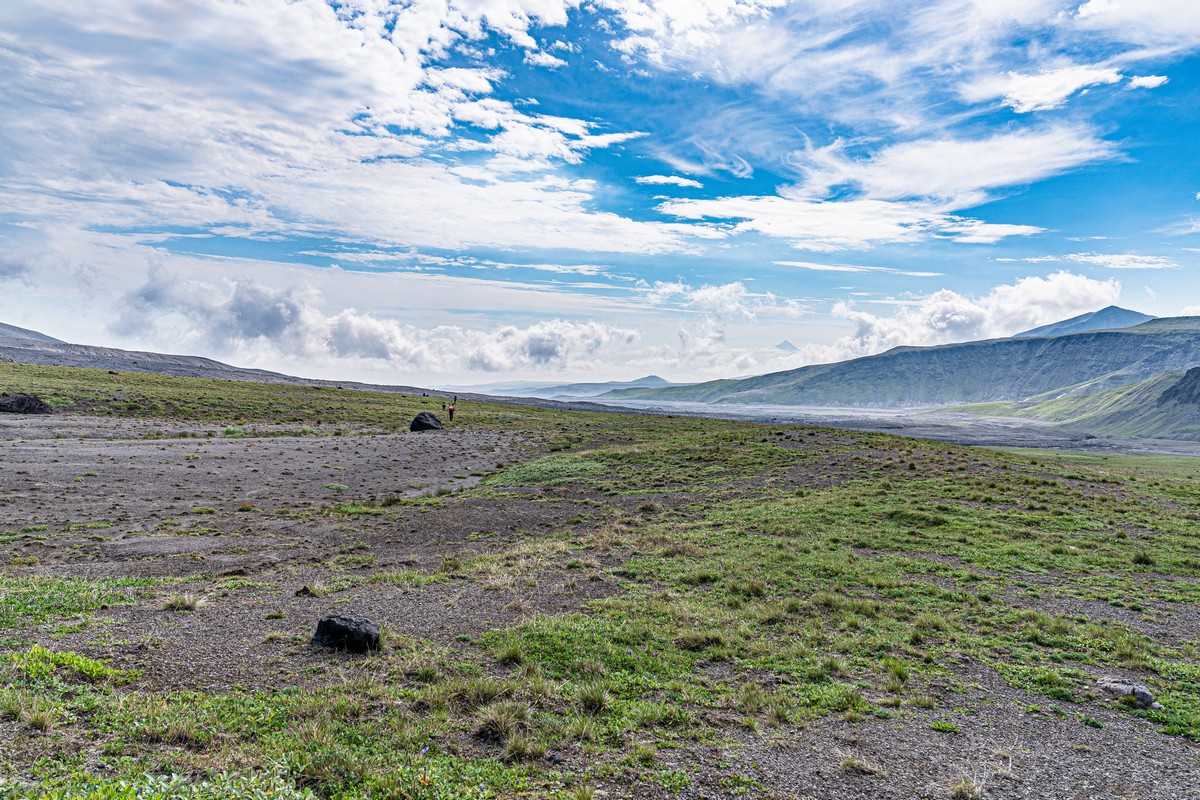 Here’s Bezymianny from the side. You can see clearly the new dome growing up inside the crater and the ‘collar’ around it – another result of the explosive eruption of 1956. 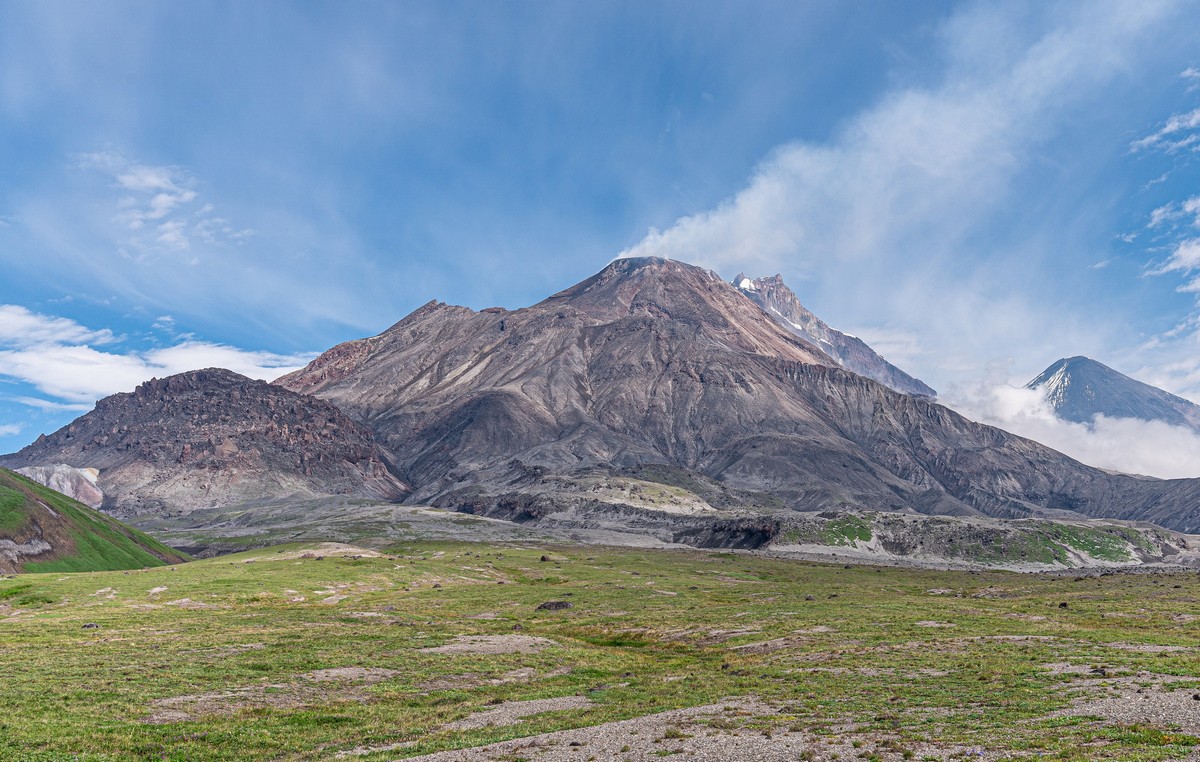 From the other side, similarly picturesque landscapes – with green highlights. Ziminá: 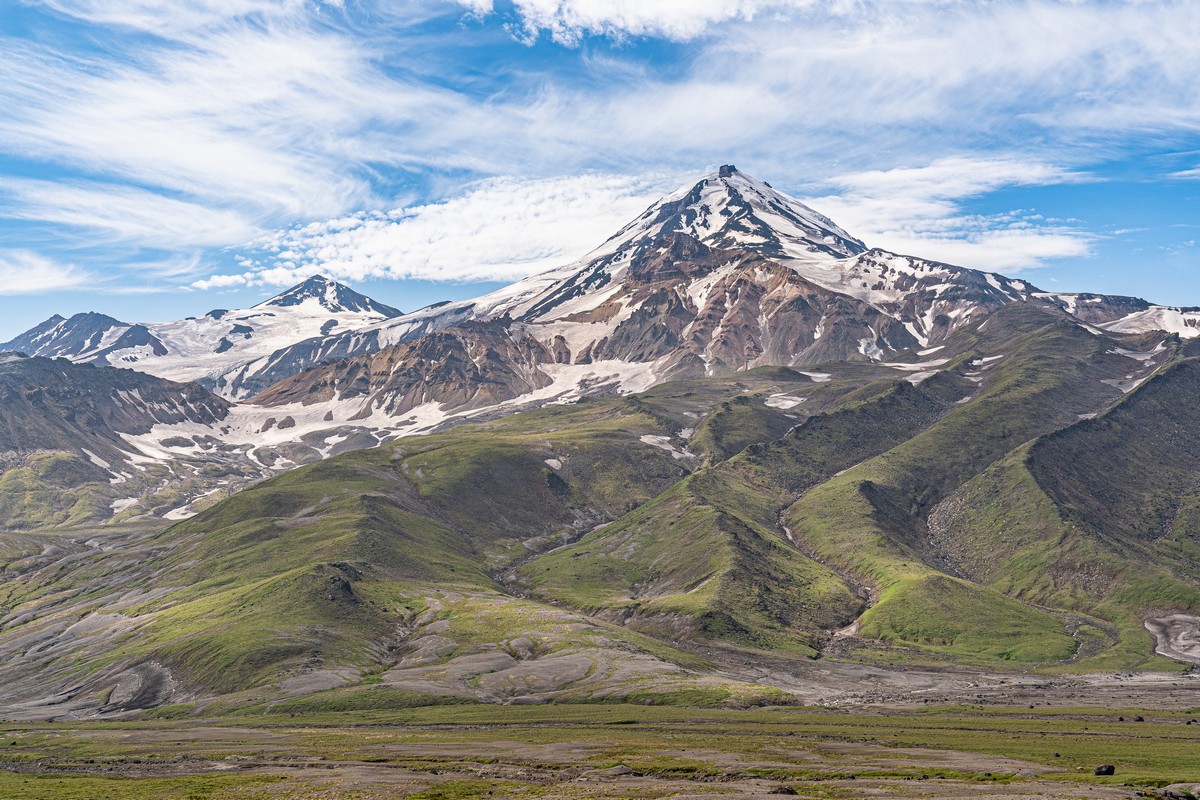 Bezymianny from a slightly different angle. A fantastic, grandiose spectacle! -> 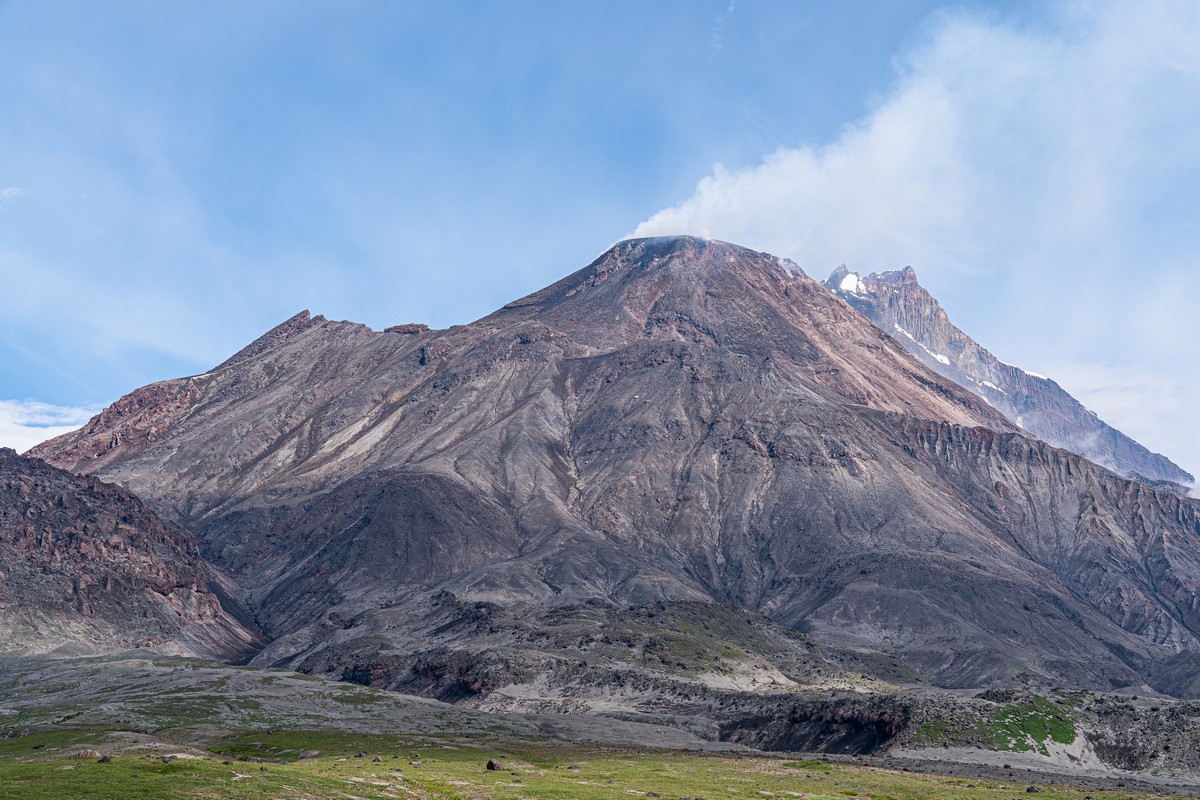 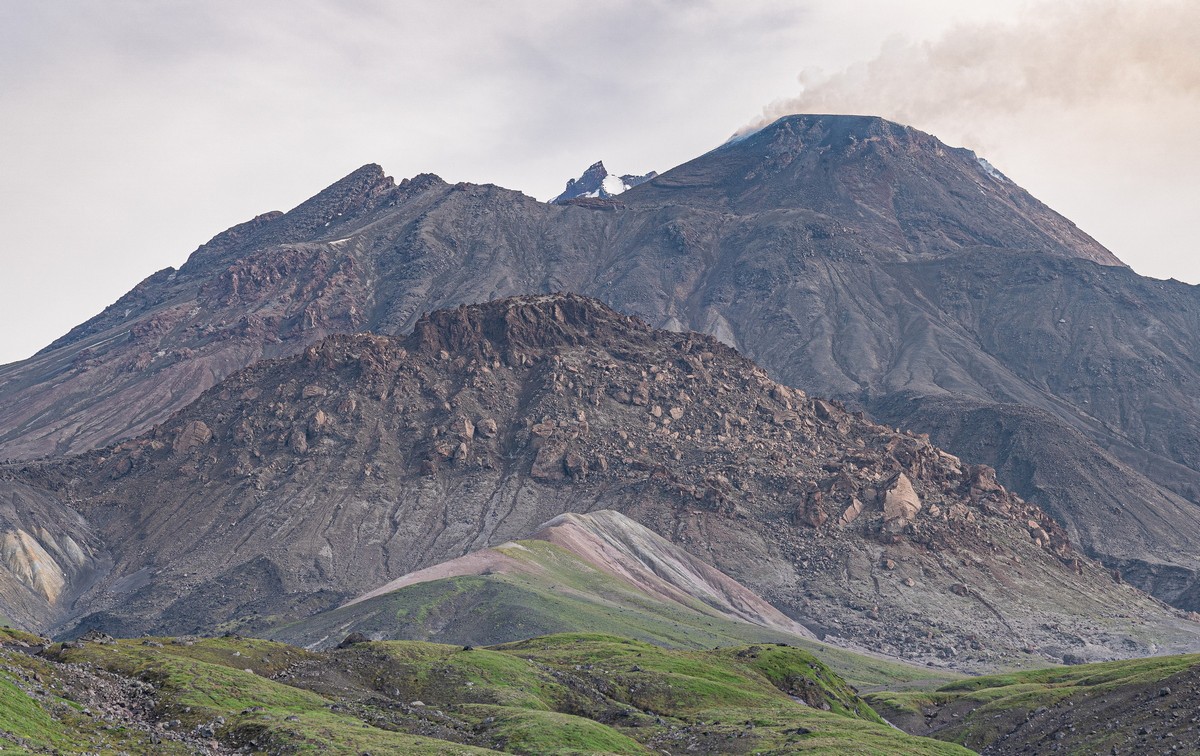 We arrive at our ‘hotel’ for the night – the Plotiná volcanologists’ cabin! -> 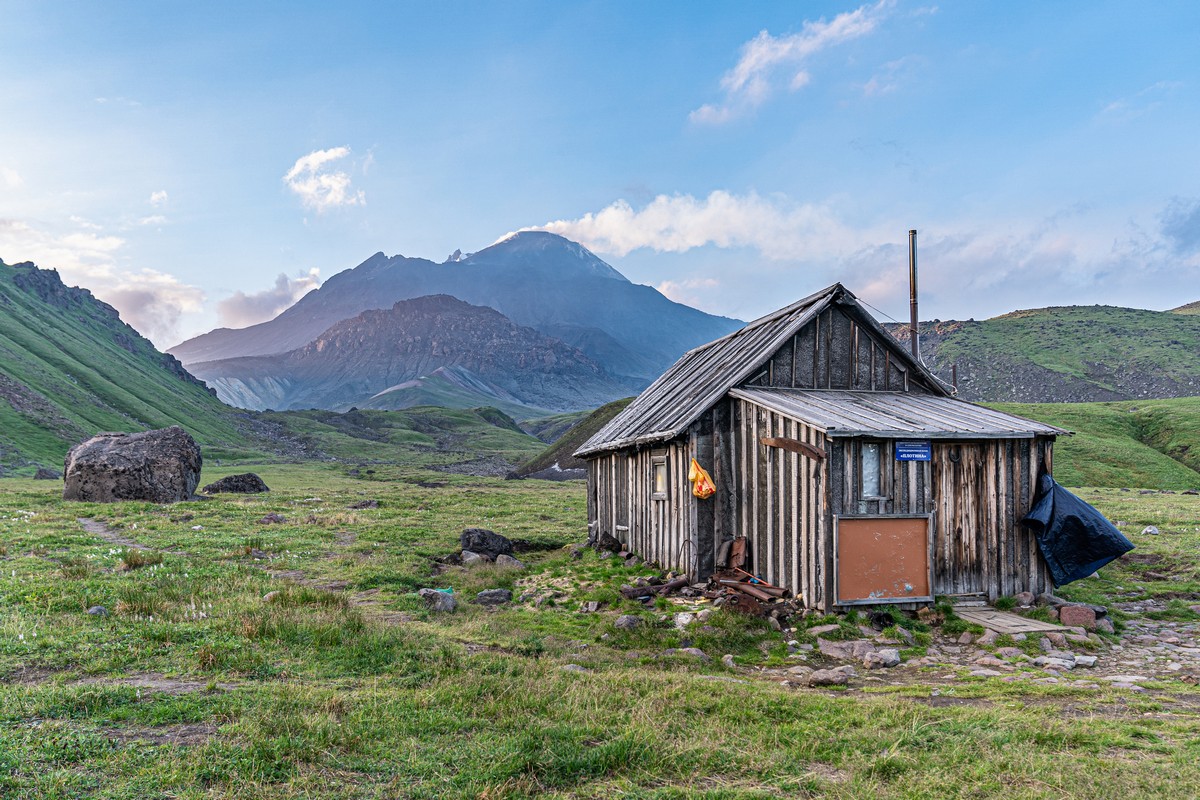 Towering over us – Bezymianny cuts an imposing, beckoning figure. Let’s see what it has to show us tomorrow…

But this post wouldn’t be complete without some detail on the infamous eruption of 1956. I realize most of you don’t click on the links (you should!), so I’ll give you a bit here:

Up until 1956, Bezymianny was a typically (for Kamchatka) symmetrical pyramid-shaped volcano. Then, in the fateful year, a mega-explosion literally ‘blew the roof off’. The explosion had an easterly direction to it, so that’s the direction the briefly-airborne and smashed-to-smithereens roof headed in. As a result the cone of the volcano turned into a horseshoe shape. Curiously, practically immediately the new cone started to grow up inside the horseshoe, and one day, when it’s ready, it will probably have its roof blown off too… 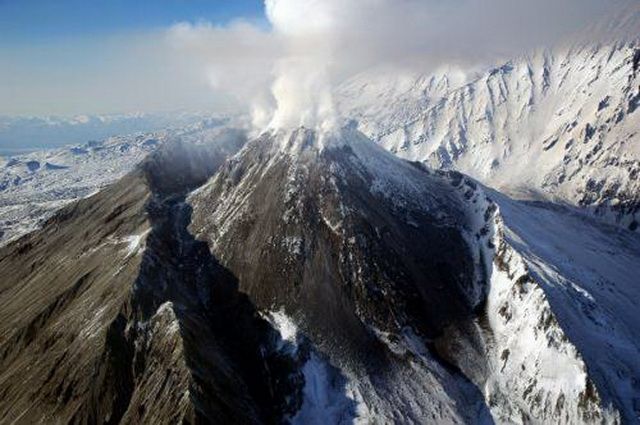 As is often the case, Russ Wiki and Eng Wiki differ plenty (there’s hardly anything about 1956 on Eng Wiki), so here’s a synopsis of what the Russian Wikipedia page on Bezymianny tells us about the eruption:

‘The catastrophic eruption of March 30, 1956 (culmination stage) was brought on by the collapse of the eastern slope of the volcano, which shifted some half a cubic kilometer of the massif. The landslide transformed into a cold (<100°С) fragmentary landslide, whose speed exceeded 60 meters per second. The fragmentary landslide formed three valley-filling branches. The central branch went farthest: 22 kilometers. The fragmentary landslide tore off and pushed forward a mass of material from the foot of the volcano (snow, ice, soil, river sediment, vegetation), which formed lengthy mudslides. This led to the catastrophic lateral eruption, since the landslide abruptly reduced the geological pressure upon the magma underground. The material (measuring 0.2 cubic kilometers) emitted by the explosion of the east-side foot of the volcano formed into pyroclastic waves (turbulent flows of a hot mixture of gas and pyroclastics). The speed of the flows exceeded 60 meters per second, their temperature was around 300°C, and they reached more than 20km in distance. The height of the eruptional cloud reached up 35km into the sky. A horseshoe-shaped crater of a diameter of ~1.3km was left after the eruption, with its opening facing east. From the eastern foot of the volcano ~500km² of trees were felled by the force of the explosion. A covering of specific pyroclastic deposits formed from the lateral explosion. A dome of viscous lava started to rise up within the newly-formed horseshoe-shaped crater after the paroxysm [eruption climax] (post-culmination stage), which continues to grow to this day.’

Here’s how Bezymianny looked before the eruption: 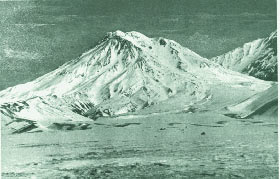 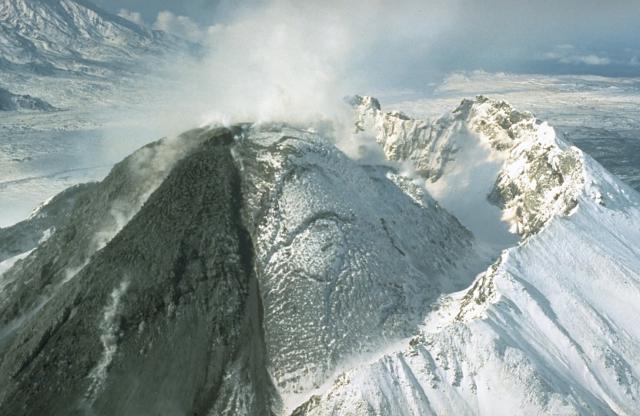 And here are the results of the explosion from a satellite. You’ll see how there’s greenery everywhere – except for the areas where the pyroclastic flows ran eastward: 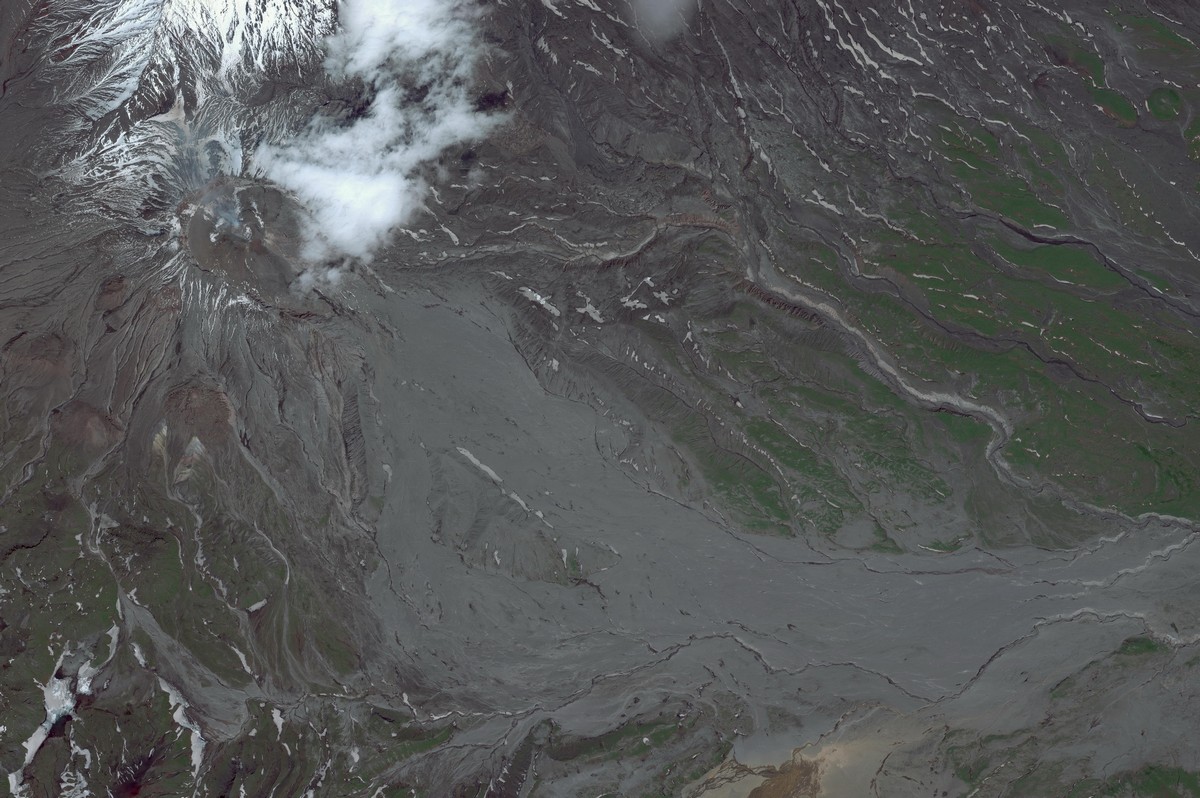 Details marked in red: horseshoe, ring of the new cone, and the direction of the lateral explosion: 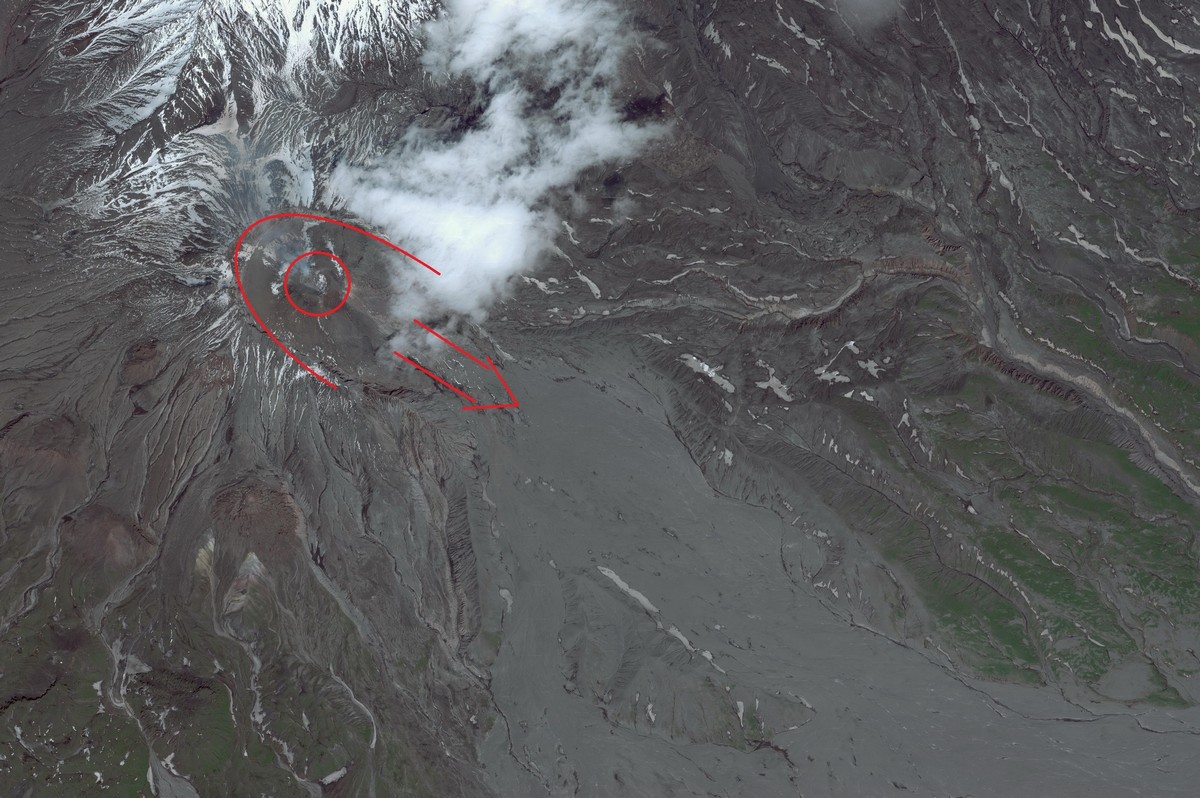 Btw, Bezymianny has a doppelganger: Mount St. Helens in Washington state in northwestern U.S.A., near Seattle (where we’ve a research center, btw; must arrange myself a visit one day so I can check the center out and re-check (was there eight years ago) the volcano out:). St. Helens erupted in 1980, tragically killing 87. I guess the only reason no deaths occurred in the Bezymianny eruption is because the local population = 0. But… tourists?

And that’s all for today on Bezymianny. But we’ll be returning to it soon…

All the pics from our 2021 Kamchatka expedition are here.