Well, well. Here’s a first: I recently suffered a bout of writer’s block.

In the past, when I’d return from various exotic/meditative/emotionally-charged travels, tales (plus pics) from the adventure-tourism side would start to appear on this here blog of mine practically straight away. This time, however, I just couldn’t get my self going. The proverbial first step was indeed proving the hardest. Odd. I wondered why…

Well, first – I’d been to Kamchatka several times before, and duly written up series of reports on most of those trips. And I’m never one to go over the same ground: life’s too short for repeats!

Second – the weather on this year’s expedition around the peninsula was worse than usual – and it’s always mostly bad weather in Kamchatka! Sure, it could have been worse. It could have been a lot better too. Glass full or empty? I digress…

Third – due to the bad weather, I didn’t take as many photos as I would have liked: I didn’t have much to show for a month-long tour.

Fourth – I committed a serious… pedagogical mistake: I agreed to take with me on the trip colleagues who weren’t quite prepared enough – neither morally nor physically. They’d read my previous expedition reports, and seen the photos, and so had long dreamed of joining me for a pop at the peninsula. However, instead of being able to gently ease themselves into all things extreme, severe and somewhat goddamn awful uncomfortable, they were thrown in at the deep end, for this year’s weather, as already mentioned, was mostly… goddamn awful – and most everything in Kamchatka depends on the weather. For this, I apologize sincerely to my colleagues who had a real tough time of it.

I finally put fingers to keyboard once I’d settled on the appropriate, doable, and – for me – most enjoyable format: a bit of a historical, encyclopedic, ‘all I know’ review of everything awesome I’ve experienced for myself in Kamchatka (so I’m not short on tales and pics due to this year’s deficit thereof). Oh, and any awesomenesses I’ve yet to experience I’ll save until having done so on future expeditions – of which there will be several, I hope!…

Well that was an (unexpectedly) long proviso-explaino intro, no?! So without more of a do, let me give you some snaps -> 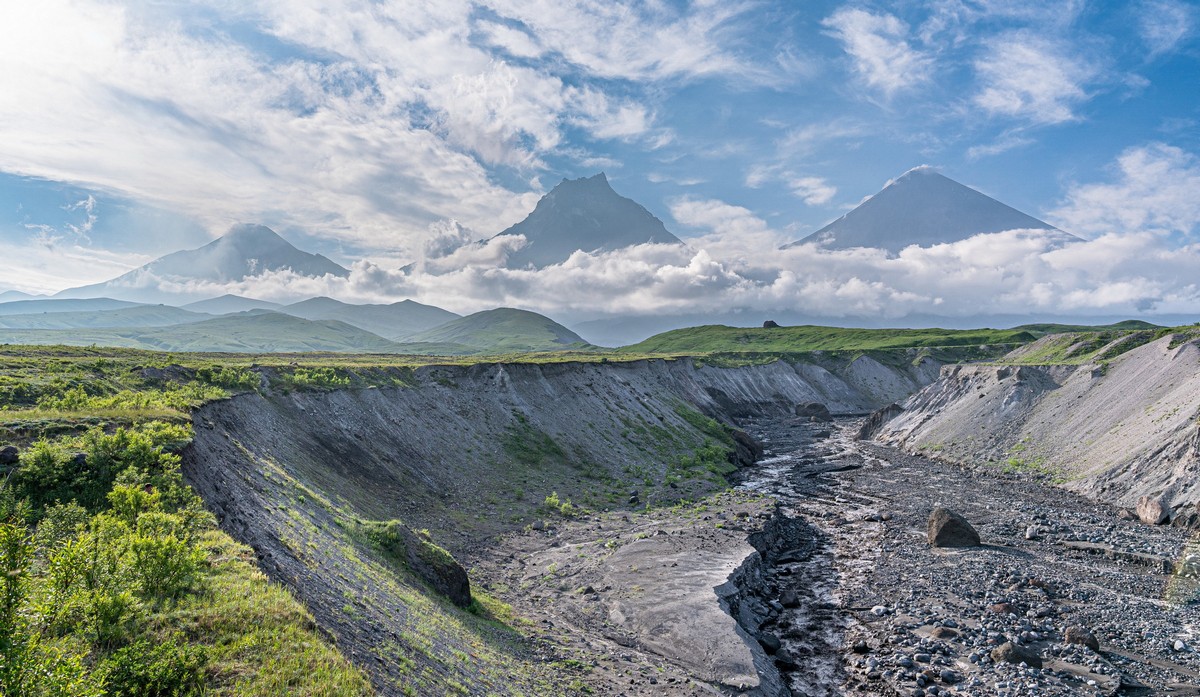 That trio of voluptuous volcanoes are three of the total of 14 that make up the Klyuchevsky group of volcanoes. From left to right: Bezymianny (‘Unnamed’), Kamen (‘Rock’), and Klyuchevskaya Sopka. Kamen died out long ago, Bezymianny occasionally erupts violently, while Klyuchevskaya Sopka is so extremely active its peak doesn’t even have a constant height above sea level!

All righty. Lengthy intro text & intro pics – done. Next… everything I’ve seen in Kamchatka. No pressure…

Where to begin? I’m a mathematician by training, so it has to be at the logically correct place: at the start. Here, that means the north. I’ll end as far south as I’ve ever been…

In the north of the Kamchatka Peninsula (not to be confused with the Kamchatka Krai, though they’re practically the same give or take a few small islands and a minor strip of mainland), there’s nothing at all worth looking at. Well, unless you’re a fan of endless barren taiga and tundra, bears and dear, and hardy shrubbery that manages to thrive in such frigid conditions. Besides that there are no cities, no towns – just one or two tiny settlements with no roads leading to them (imagine?!) inhabited by indigenous peoples. No infrastructure, nothing. A region of the world mostly untouched by the hand of ‘civilized’ Homo sapiens.

Quick disclaimer! If you come across any information here and in future posts in this series that you know or reckon to be not quite accurate, please do correct me. I’m no historian, anthropologist, geologist, biologist… I’d be only too pleased to find out what I missed/got wrong, as I’m always interested in improving my knowledge of my favorite – and dear to my heart, eyes and camera – Kamchatka ).

Also: just to remind – there are no roads that join Kamchatka to the mainland, no railroads either! All there is: impassable mountain terrain, endless wind-felled trees, numerous rampant rivers, and – my favorite – lots of volcanoes! However, one April or May, a group of nutjobs bravehearts actually drove on specially-adapted off-road vehicles (~tanks) from the mainland over onto the peninsula. What an experience that must have been!

Also: still in the north of Kamchatka, still where there’s nothing much at all (but quite a bit south of the northernmost region of the peninsula) there is one place of curious interest – which is situated there precisely because there’s nothing much there at all. It’s the Kura Missile Test Range, a site where intercontinental ballistic missiles are aimed and fired at for some remote bada-boom! Oh my.

Ok. Zero-zone over with, now for some proper Kamchatka…

1. Location one – Shiveluch. I know I said I wouldn’t be including places I haven’t been to myself, but I have to make an exception here (in addition to the ICBM bomb site, which I’ve no intention of visiting) – if only for a brief mention. Trusted sources highly recommend checking out this – Kamchatka’s northernmost – volcano. I haven’t been probably because it’s even trickier to get to than a regular tricky-to-get-to volcano on Kamchatka (i.e., all of them). Helicopter required. // Add to my Kamchatka to-do list – my backlog.

Next up – actually, next down – the above mentioned and shown Klyuchevsky group of volcanoes. Trumpets, drum roll, applause – curtain up! ->

Location two. The Klyuchevsky group of volcanoes. Breathtakingly beautiful constructions, especially the above-mentioned trio – Bezymianny, Kamen and Klyuchevskaya Sopka. Here’s a pic of them from a different angle – from up in space! -> 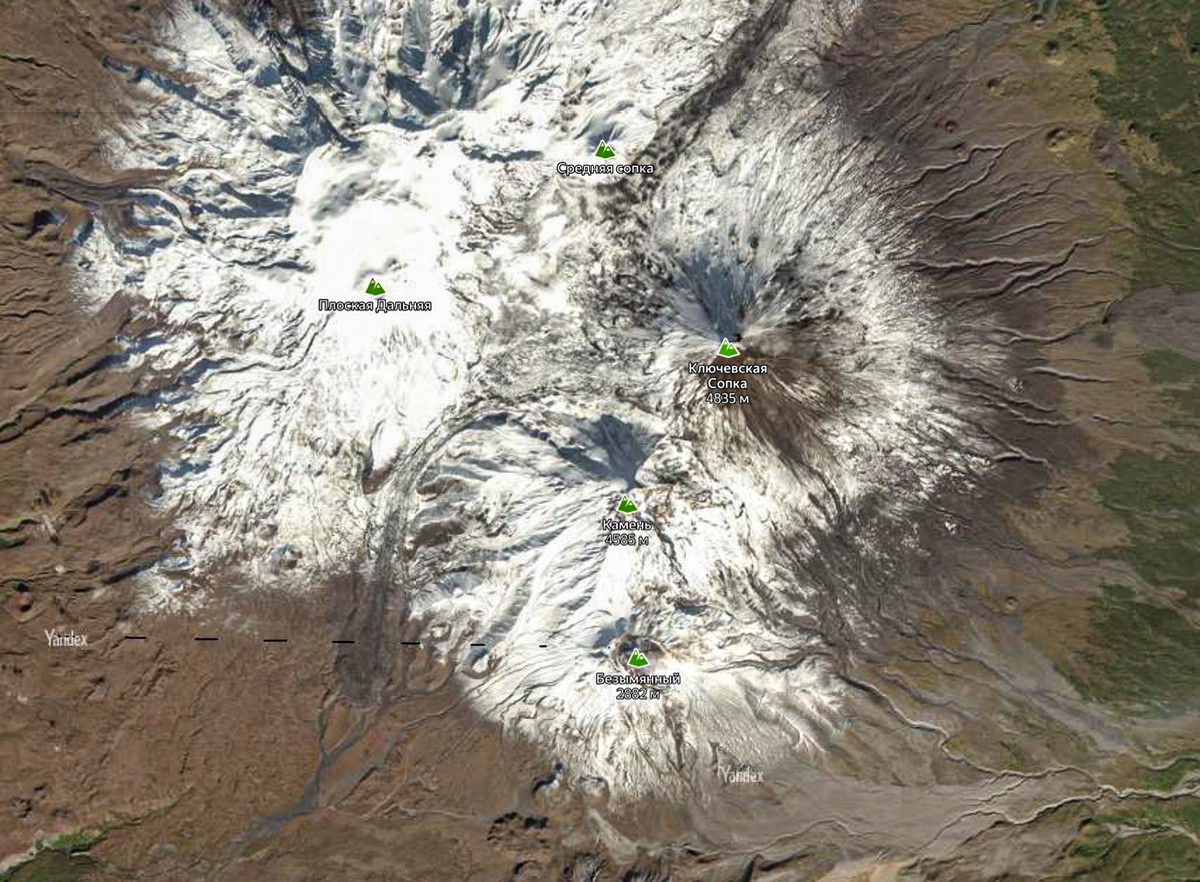 Given good weather (!), the view from the side and quite a way off – oh my gorgeous ->

The view from the east. In turn – Bezymianny: 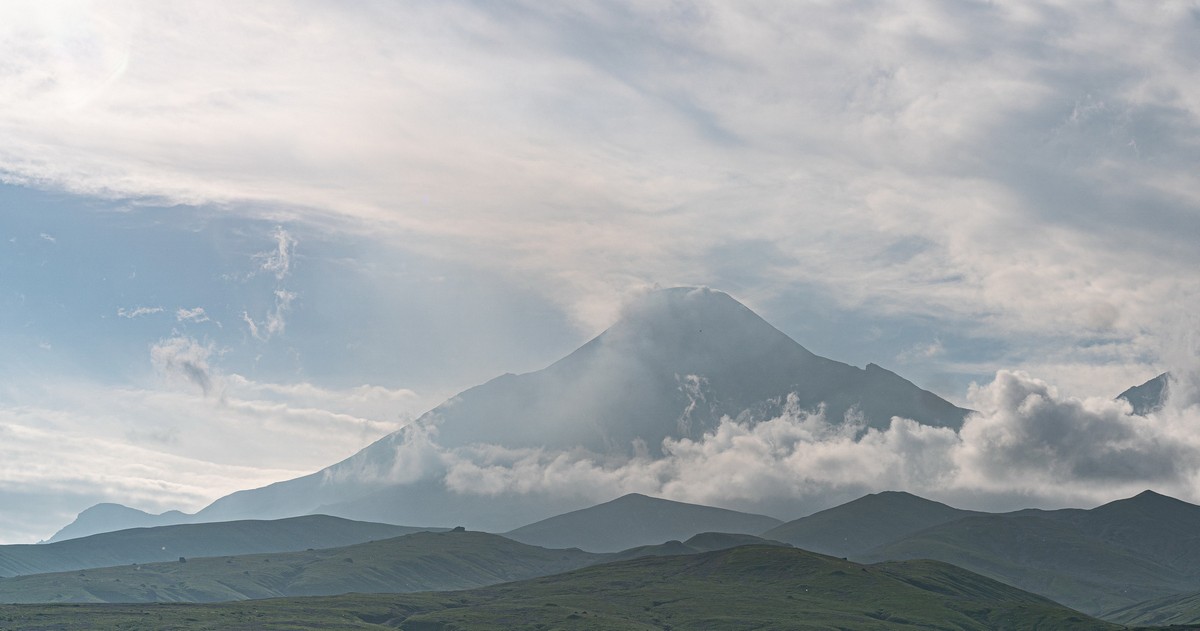 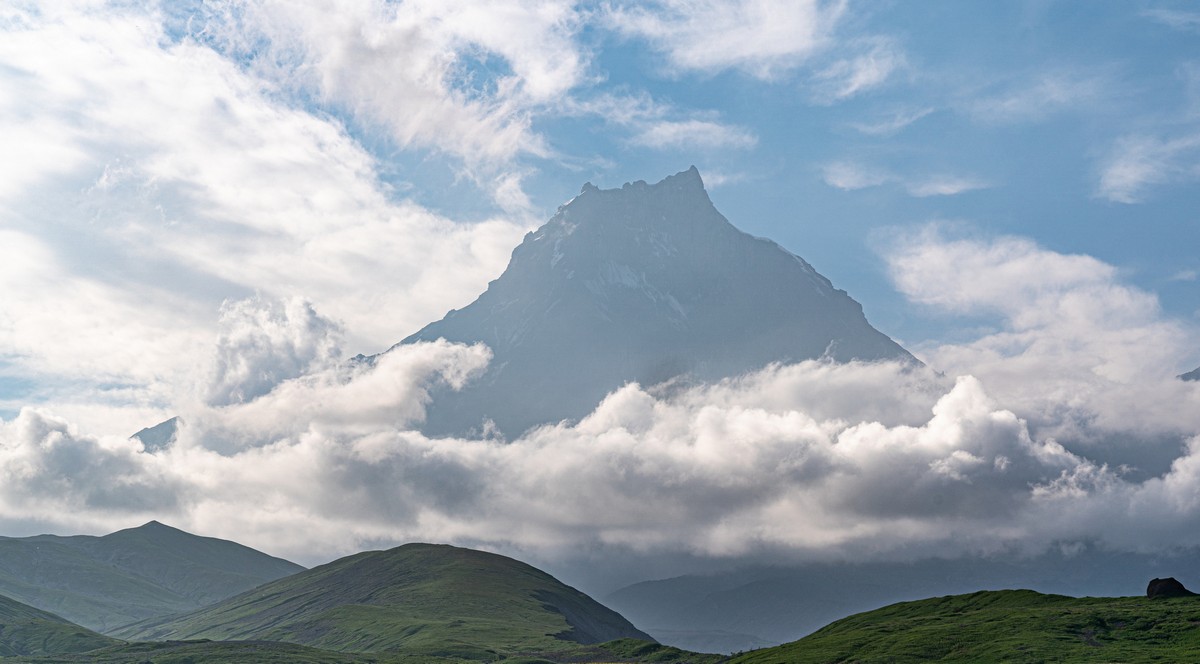 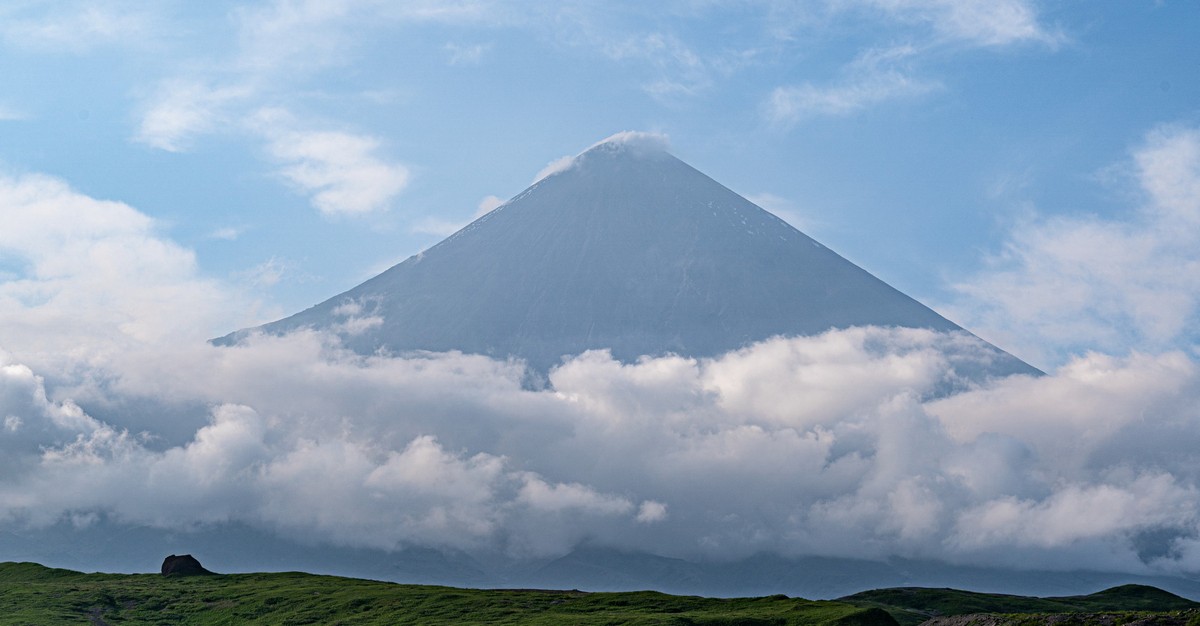 You could sit and stare at this ‘garden of volcanoes’ forever… 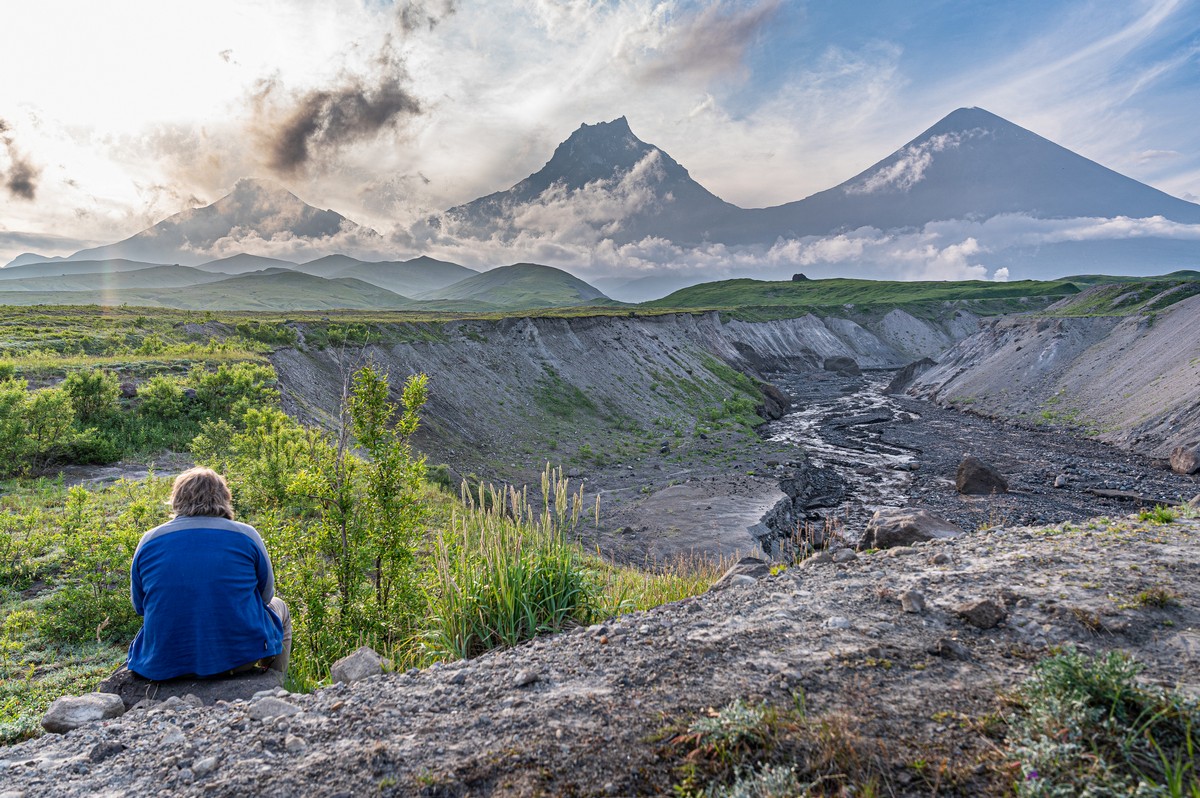 It’s not just the holy trinity that astound either. There’s also Ziminá, next door: 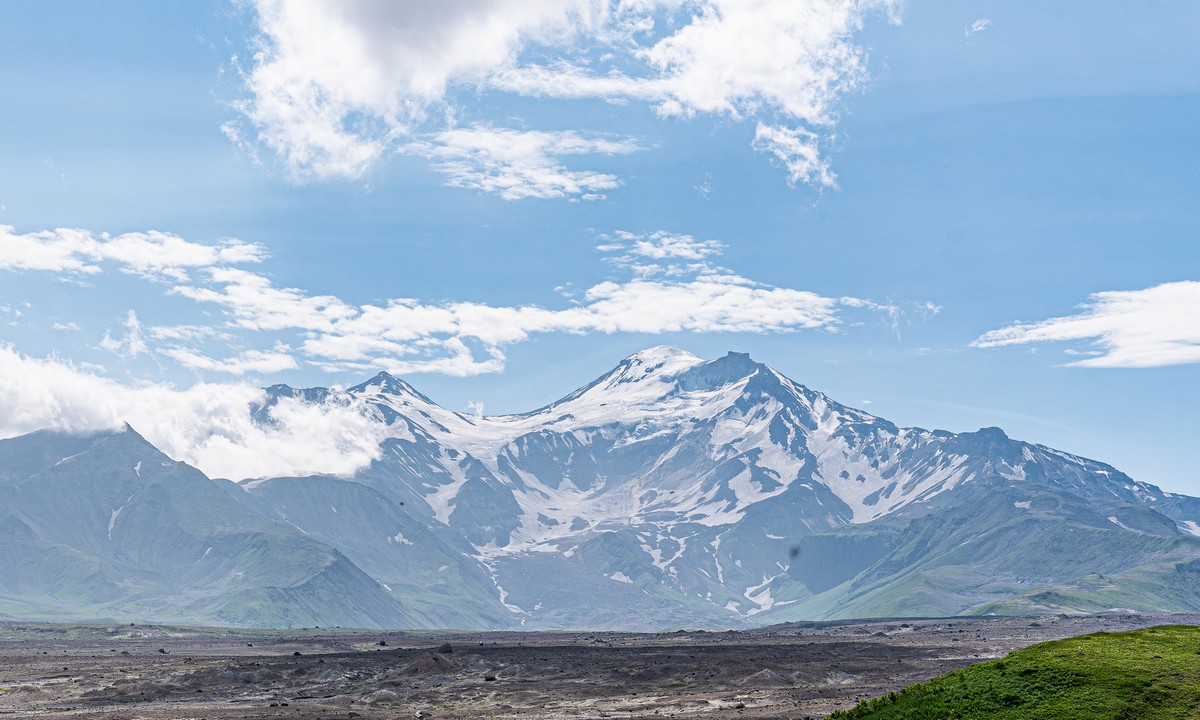 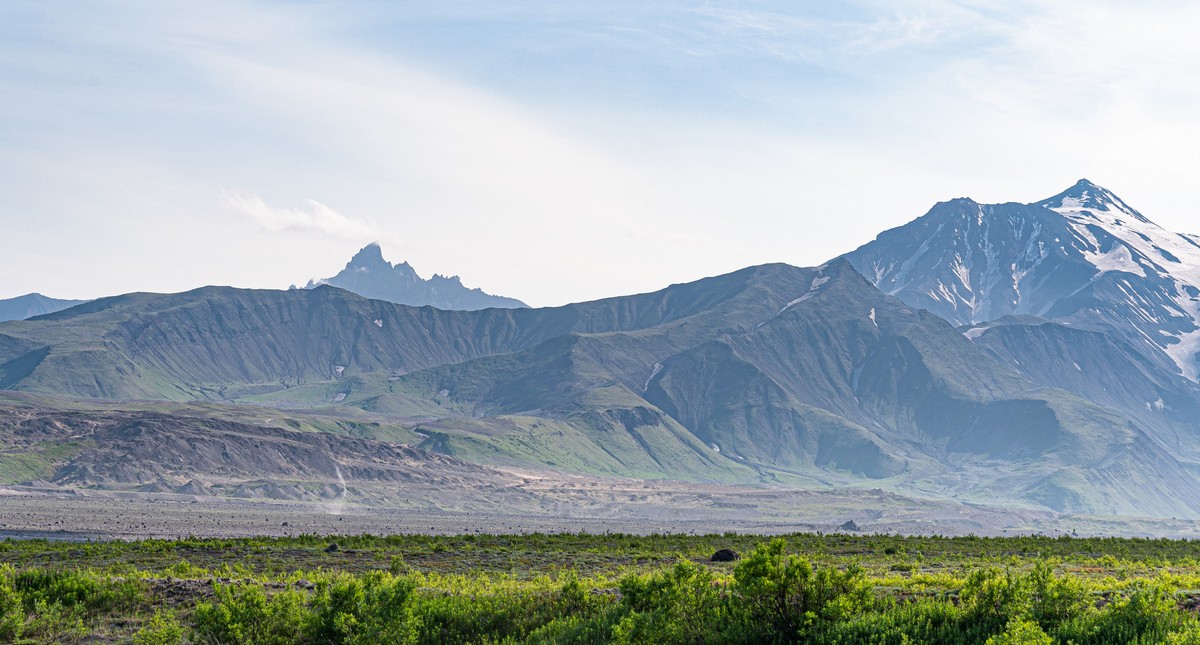 Even the clouds round here are unusually photogenic – especially the lenticular ones: 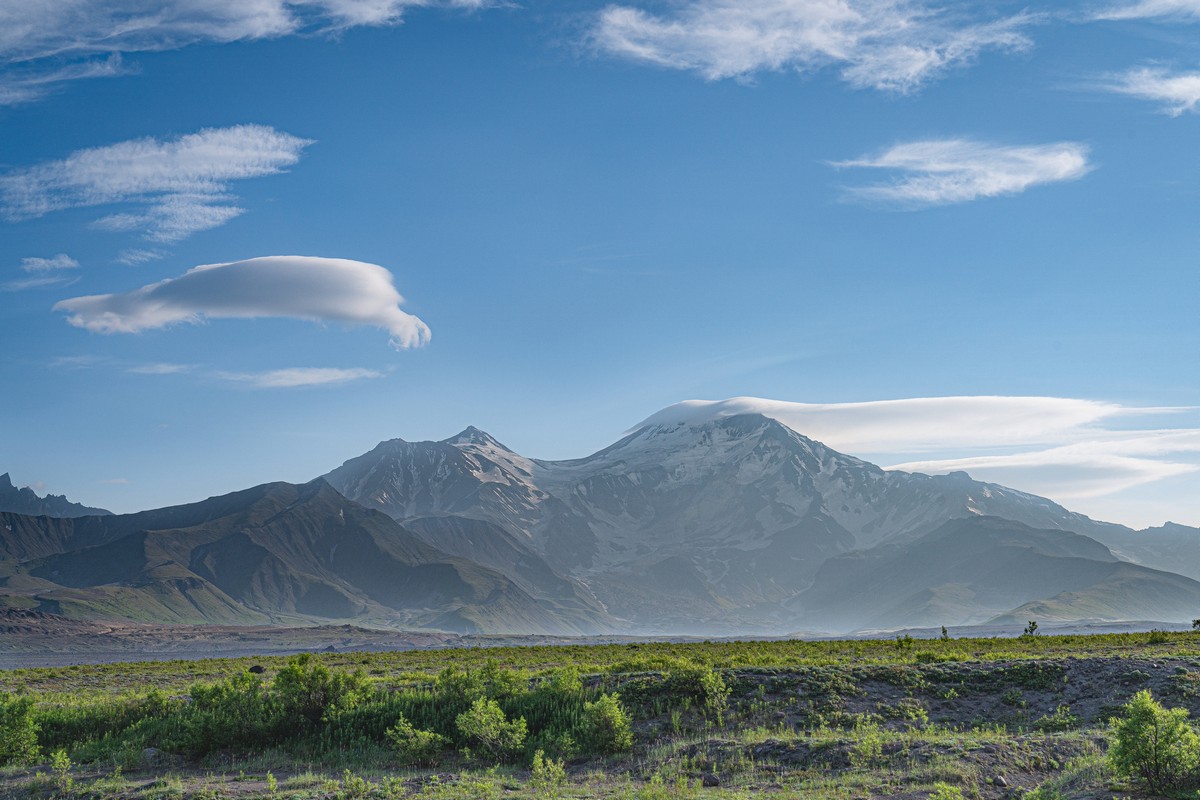 Some of them remind me… of a certain recent U.S. President! 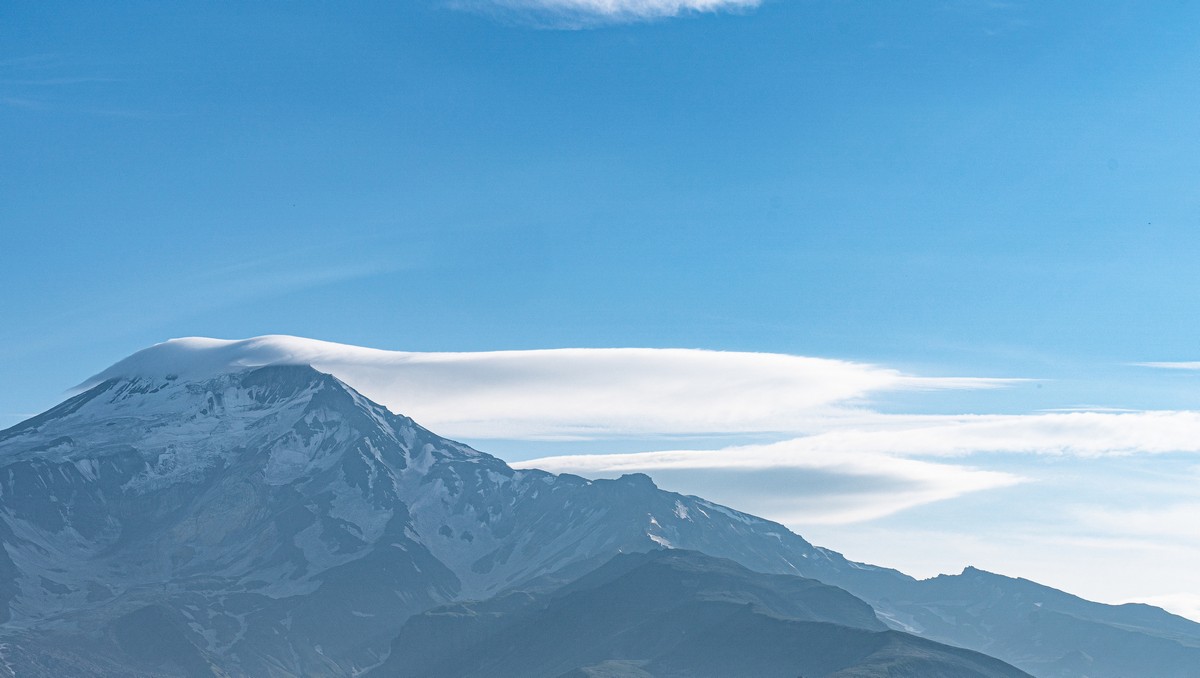 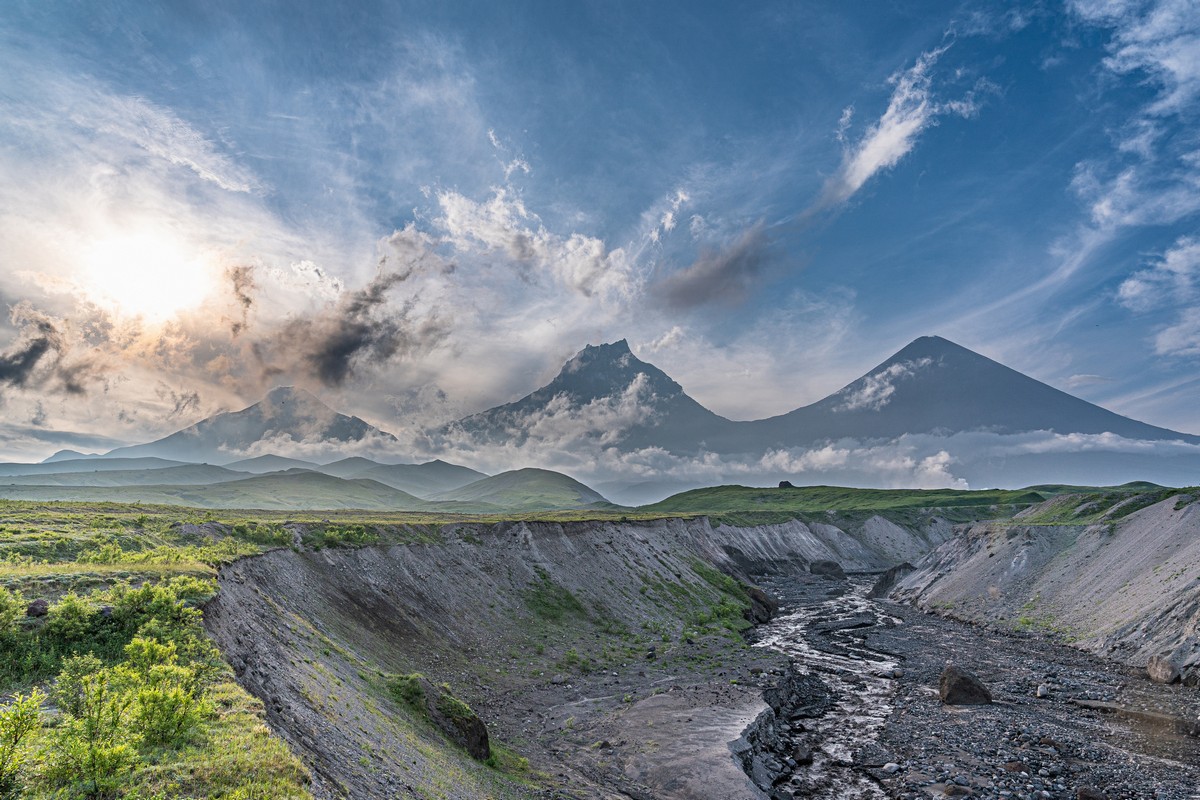 The age of this construction has been estimated at around 7000 years old. A wee toddler. Therefore, it’s often smoking ). Not that it will harm its health or life-expectancy. It’ll outlive all of us! 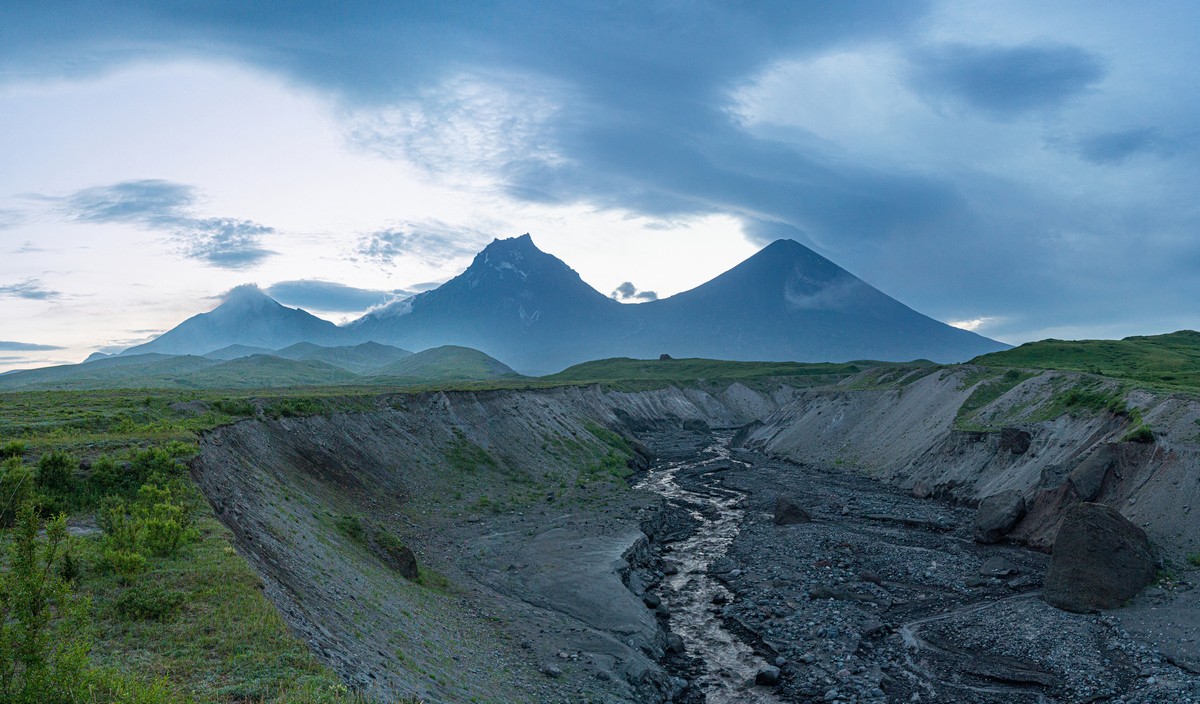 I think the real special thing about the Klyuchevsky group is that you can behold it from so many different angles, in different kinds of weather, and at different times of day, and each time you’re bowled over by its majestic magnificence!

Way back in the year 2010 we were ever so lucky with the weather, and ever so lucky that Klyuchevskaya Sopka was erupting. The resulting photos – ever so lovely! ->

And no Photoshop whatsoever! These pics show the scene exactly as we saw it with our eyes. And at night bright orange lava spewed out of the top of Klyuchevskaya! Come the morning, the magical movie continued – albeit with more subdued colorings: 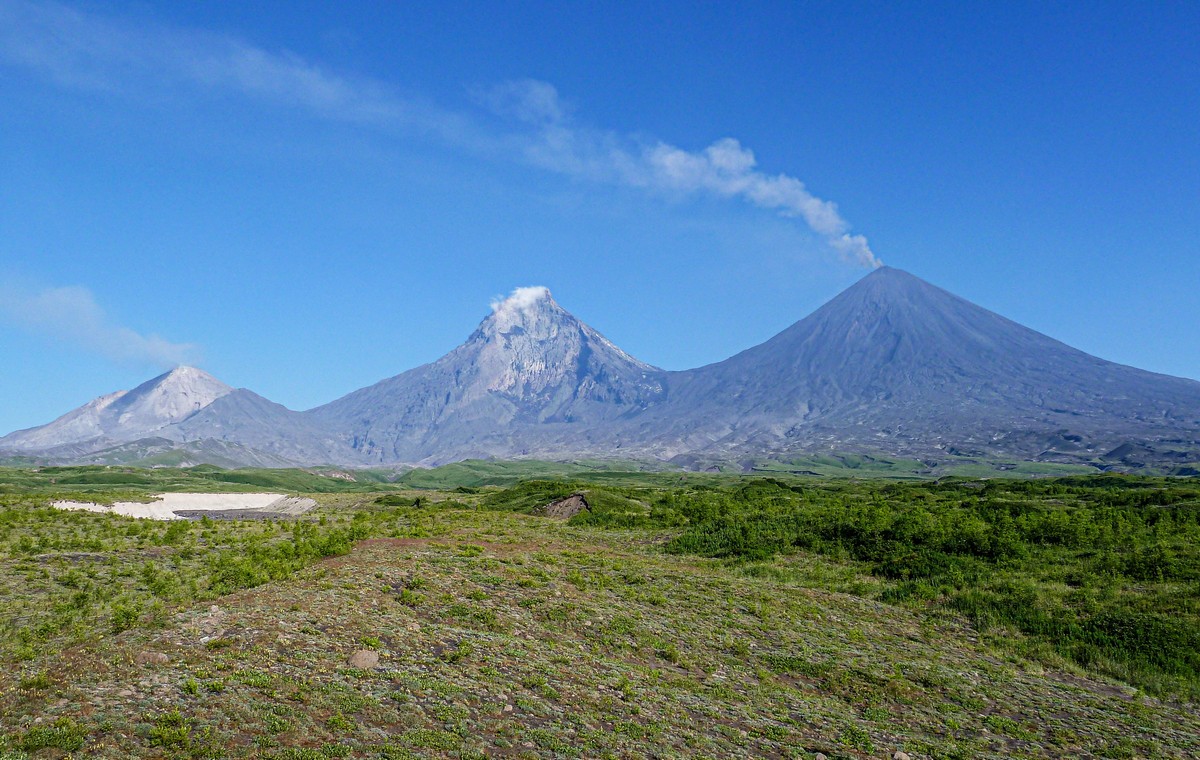 Those are the scenes from down on the ground. From up in a chopper – just as monumental, it should go without saying. Here, for example, is Tolbachik, with Kamen and Klyuchevskaya Sopka behind it -> 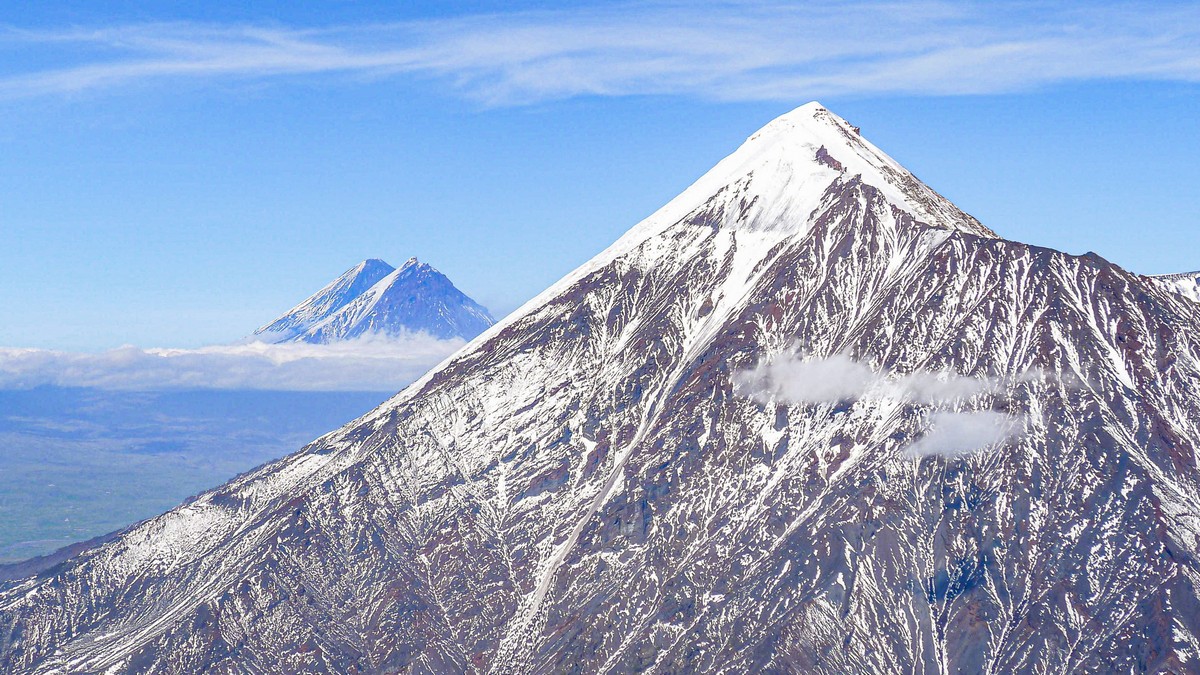 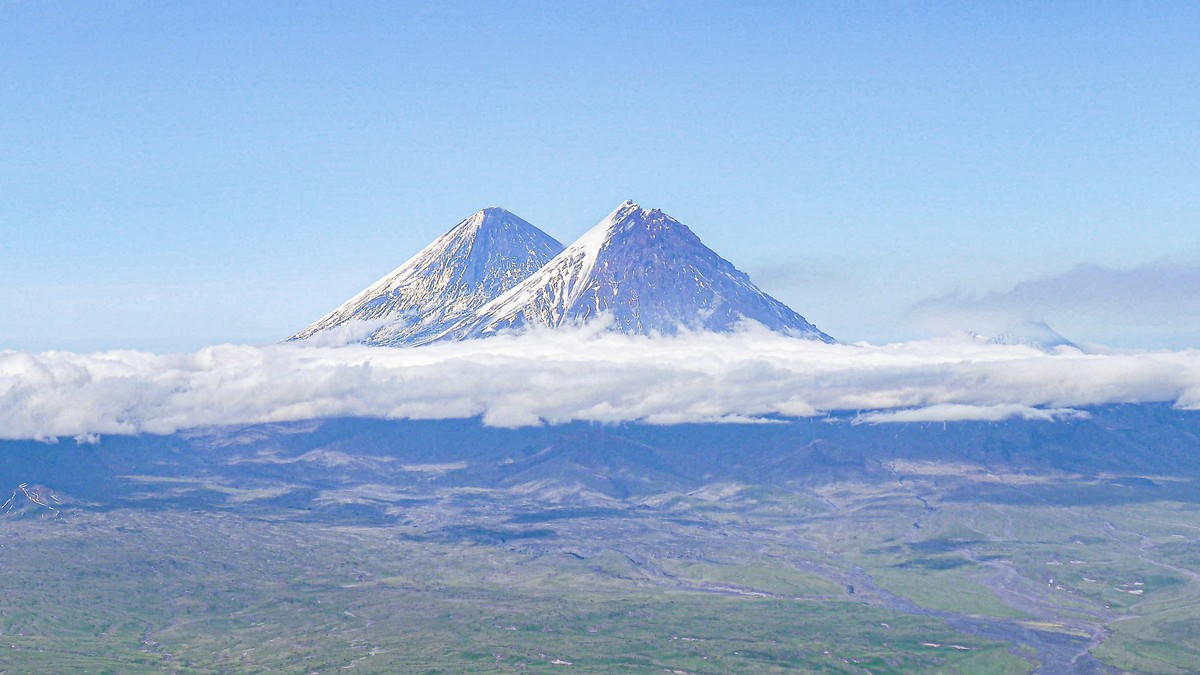 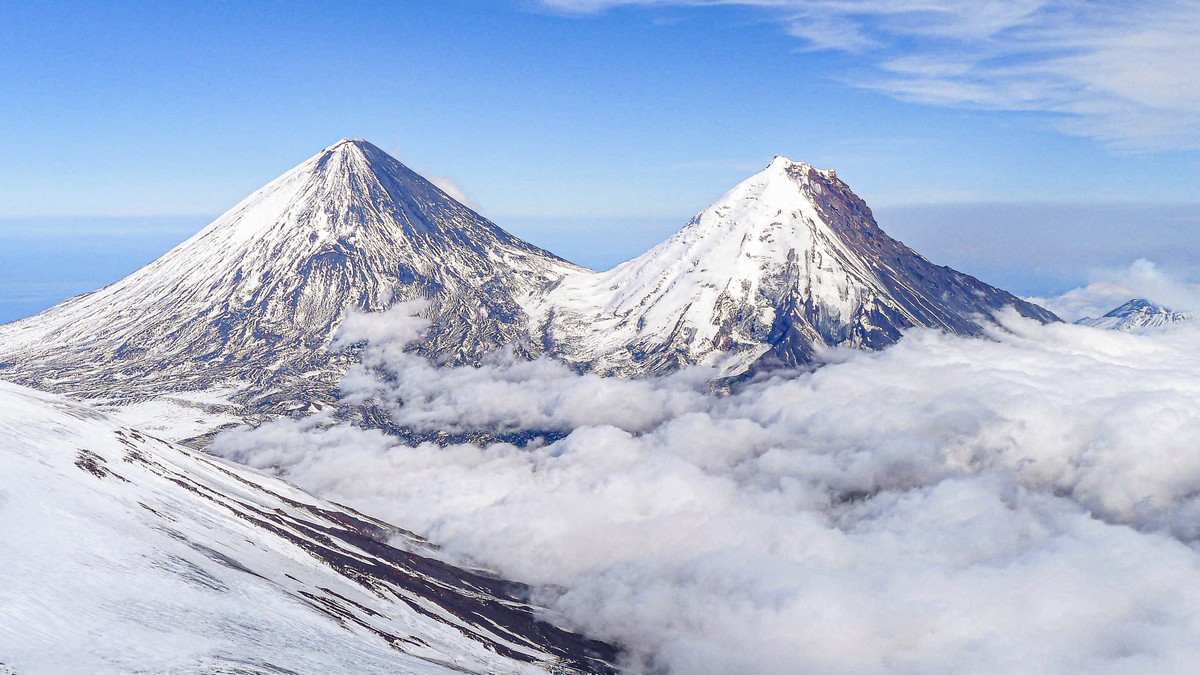 You can land a helicopter in the ‘saddle’ here between the two volcanoes. We’d never managed it due to poor visibility. Was hoping we’d finally make a landing this year. Guess what? Poor visibility… 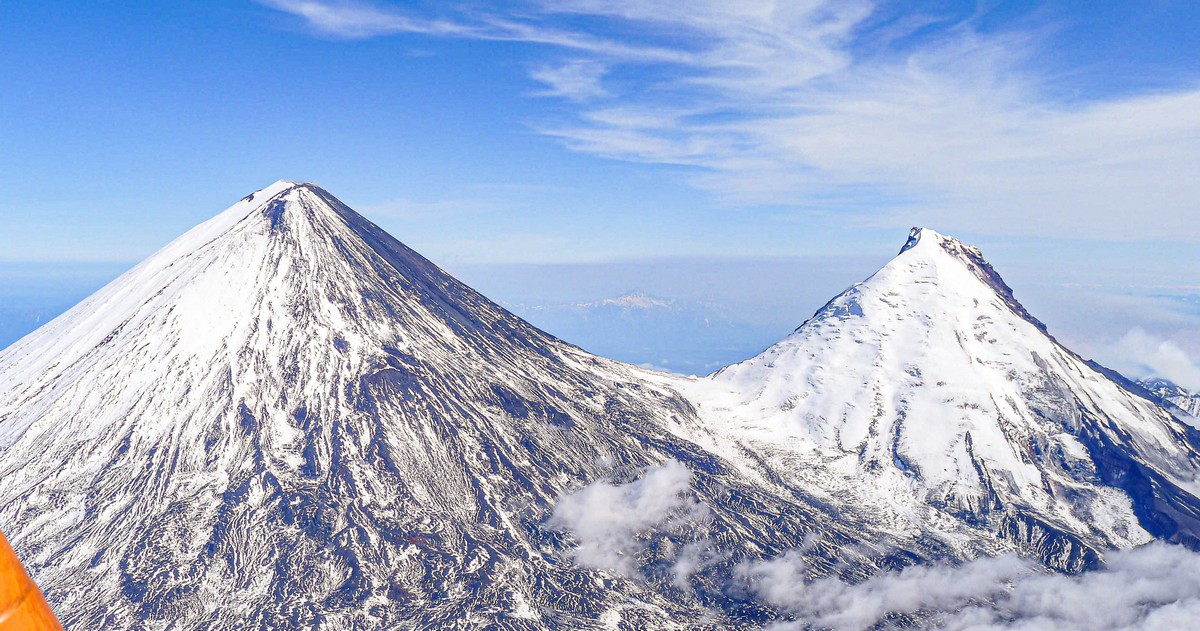 Here’s the only thing that was visible this year: 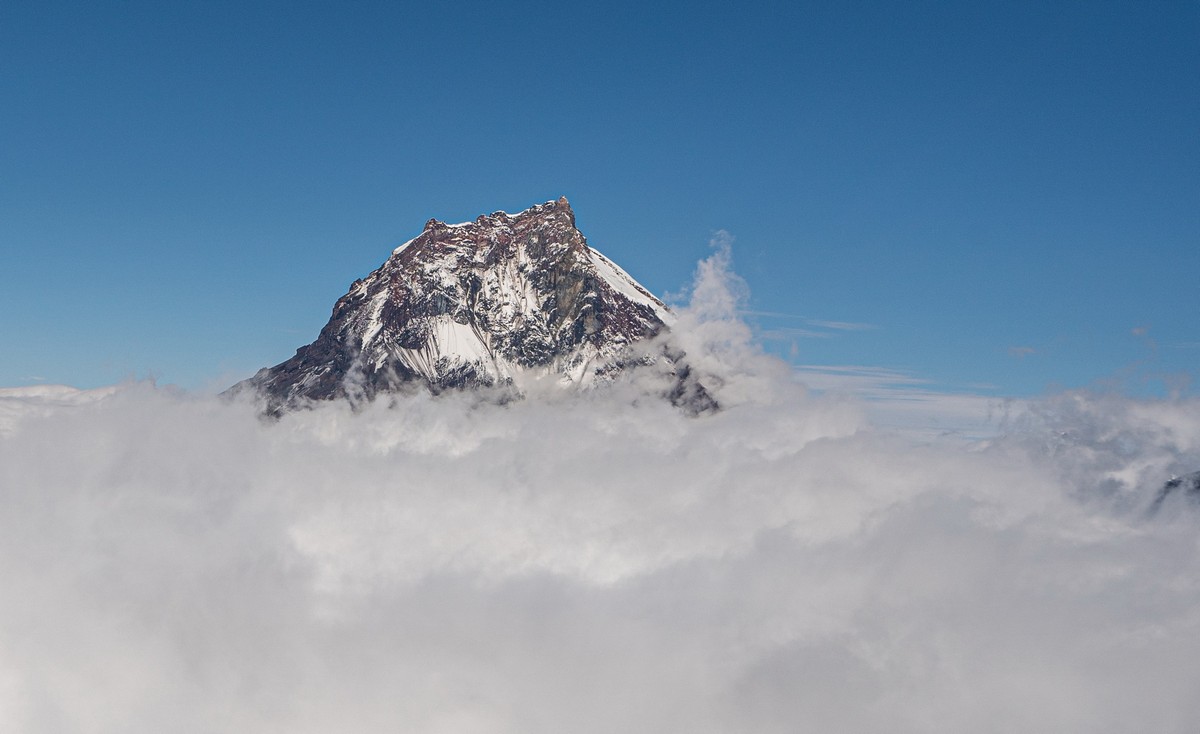 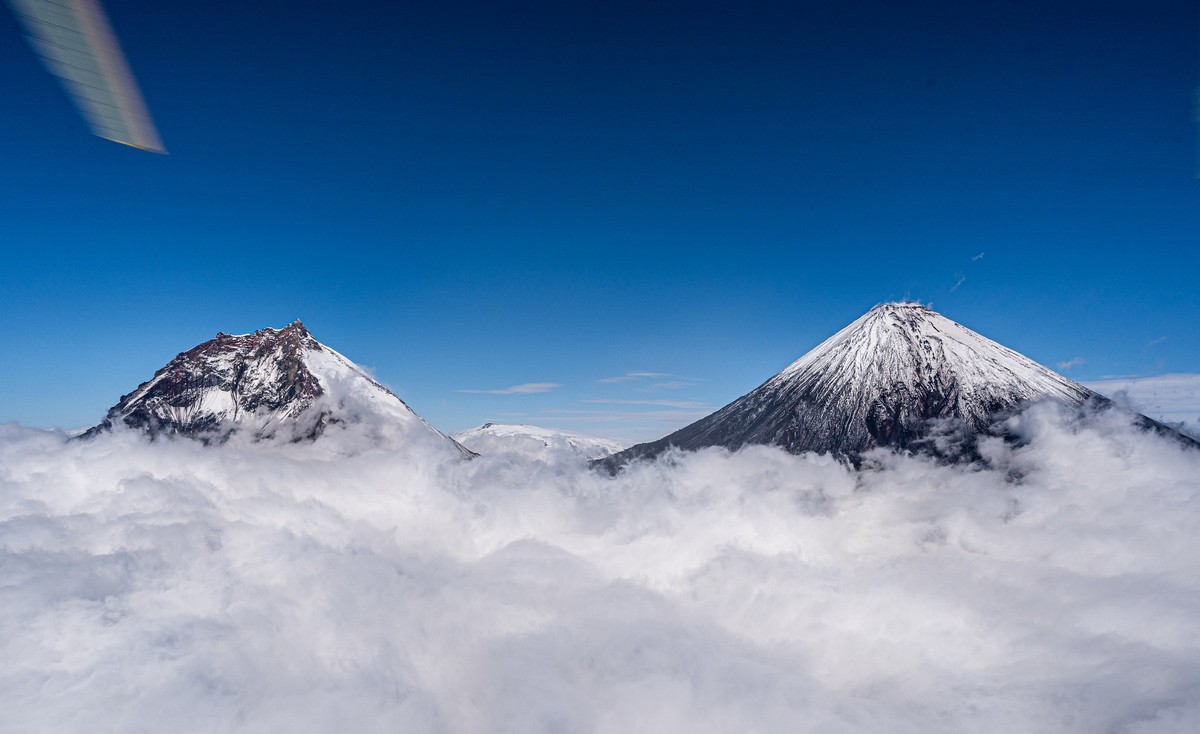 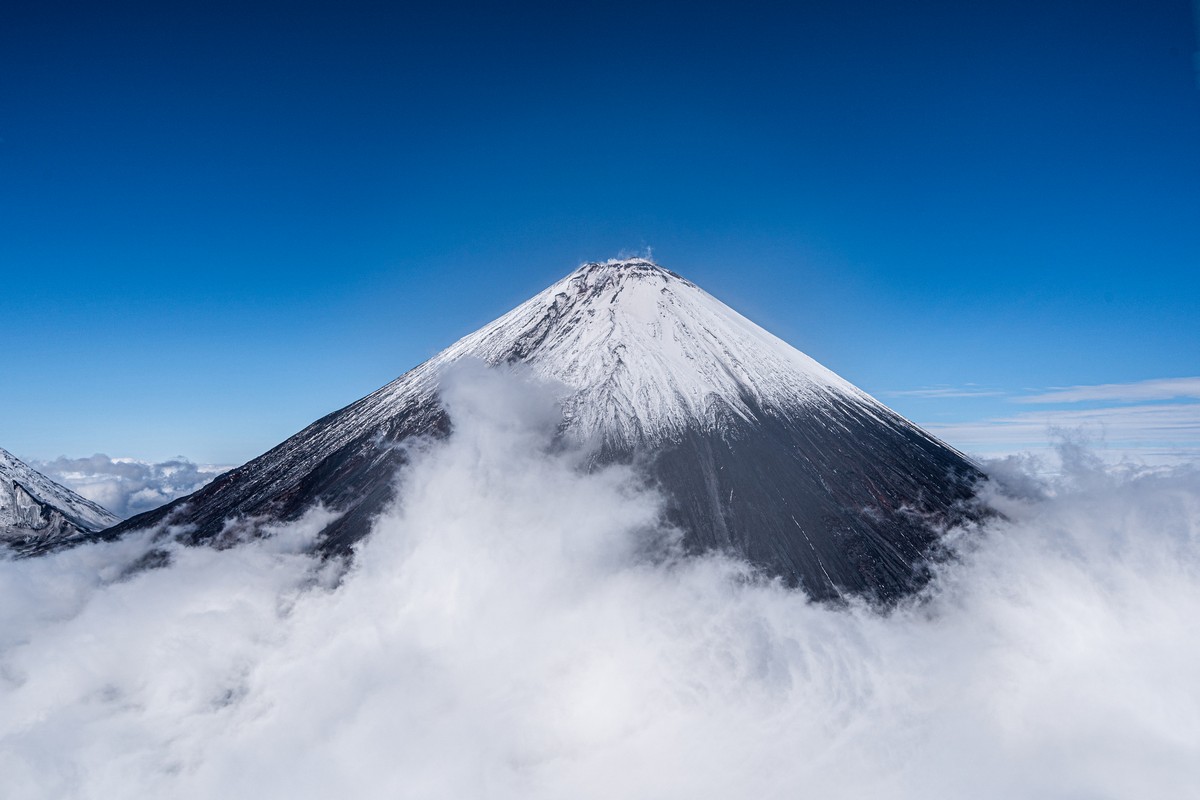 From a distance – oh my geometrically-perfectly-conical! Up close, the surface is nothing but loose rock, with frequent rockfall. Real tough to climb up. But folks do try it; alas – often with fatal consequences…

Beneath the volcanoes – some kinda slag-and-ice Hell:

If the sun had been out, the colors and impressions would have both been positive. As it was – bleak dull gloominess was the order of the day.

That’s all for today folks! Stay tuned for the next Kamchatka-2021 installment.

The rest of the photos from the expedition are here.