The Lena Highway is somewhat notorious: up until 2014 most of it wasn’t asphalted! Accordingly, it could get more than a bit muddy every late spring/early summer. In 2006 it was even named among the World’s Most Dangerous Roads. Indeed, looking it up on the internet, some of the photos you find do seem to back up this anti-accolade:

Fortunately, such scenes are a thing of the past. Today the road has been smoothed out, many of the previously non-asphalted stretches are now asphalted, and some stretches are concreted. But they haven’t stopped there: active preparation works are clearly underway for further construction/repair works. Just look at the road today: 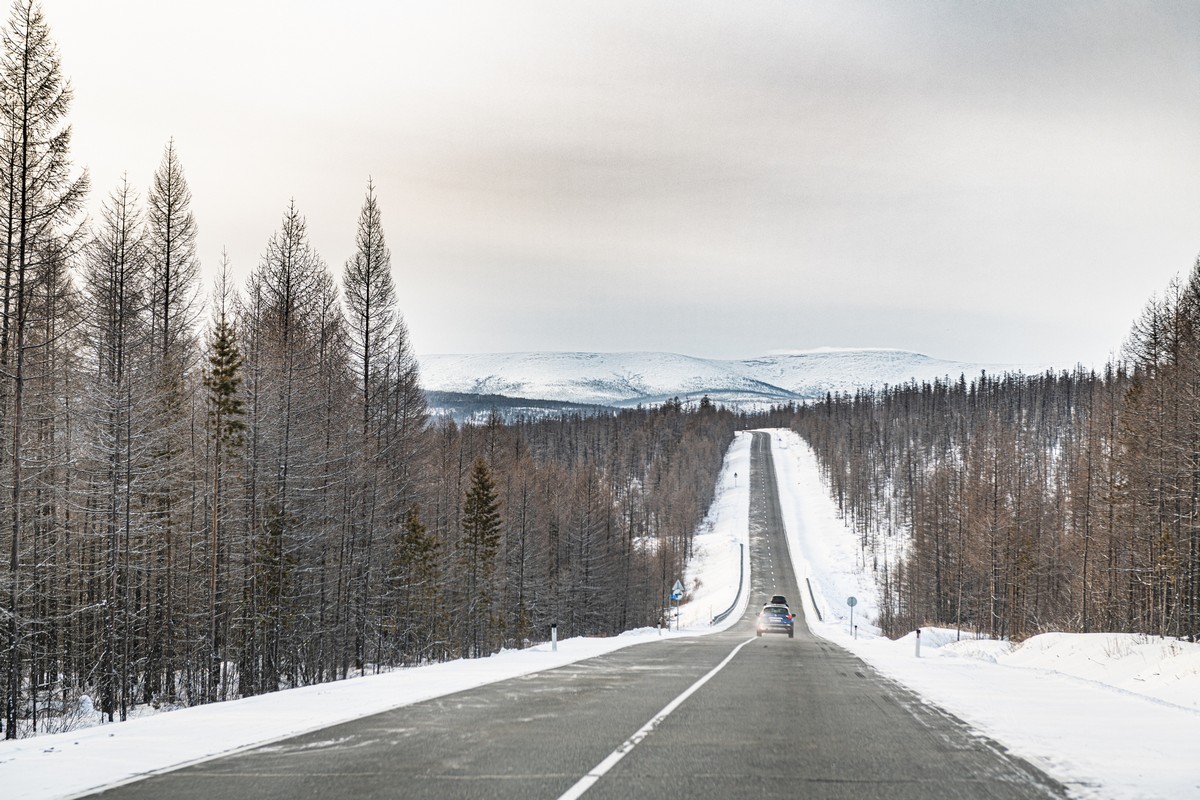 A dream to drive on! Some of the freshest stretches were simply world-beating: gently sloping between hilltops (no doubt with meditation-suitability in mind:), the smoothest of asphalt surfaces, the clear road markings, the shoulders, the signposting, the crash barriers, the cleared snow – all of it: 10/10! I even asked the others via the walkie-talkies: ‘Are we really in Yakutia? Or am I in a dream?!’ 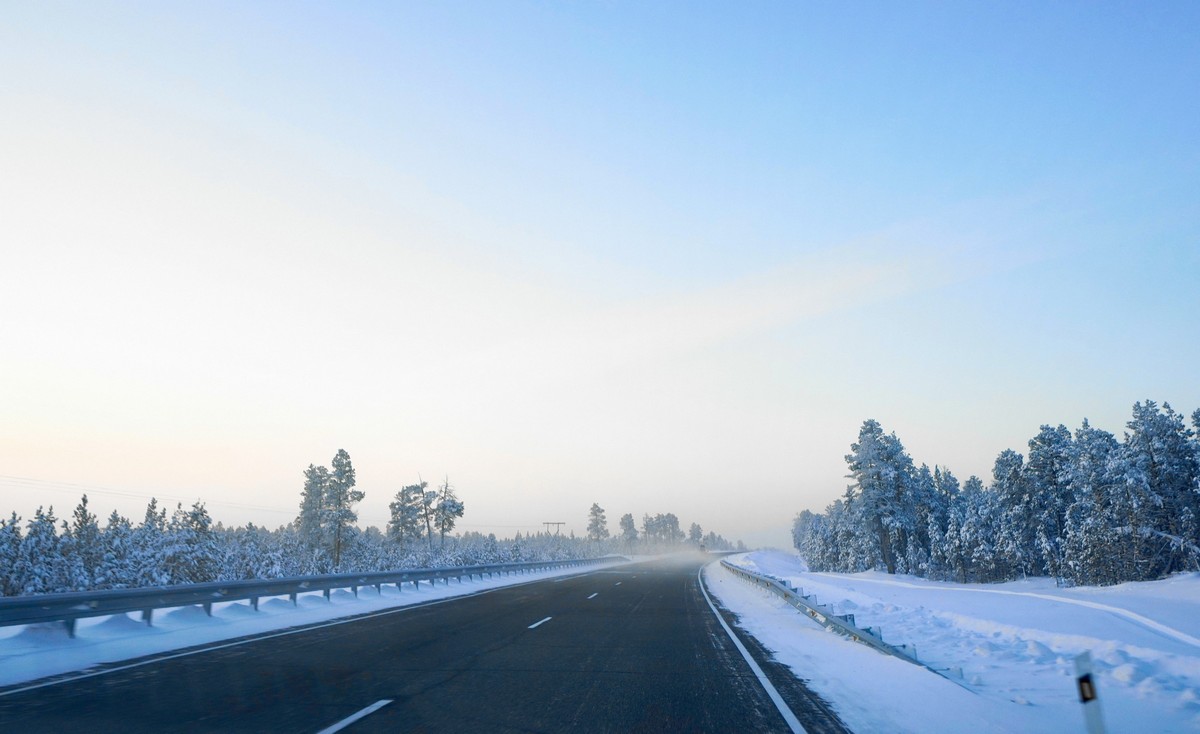 The plan is for the road to be completely asphalted/concreted by 2023. I’m not sure they’ll make it in time though, since we drove upon real long stretches where the surface was mere loose stone chippings (still, since everything was frozen, it was a perfectly acceptable – smooth – surface upon which to drive for us) : 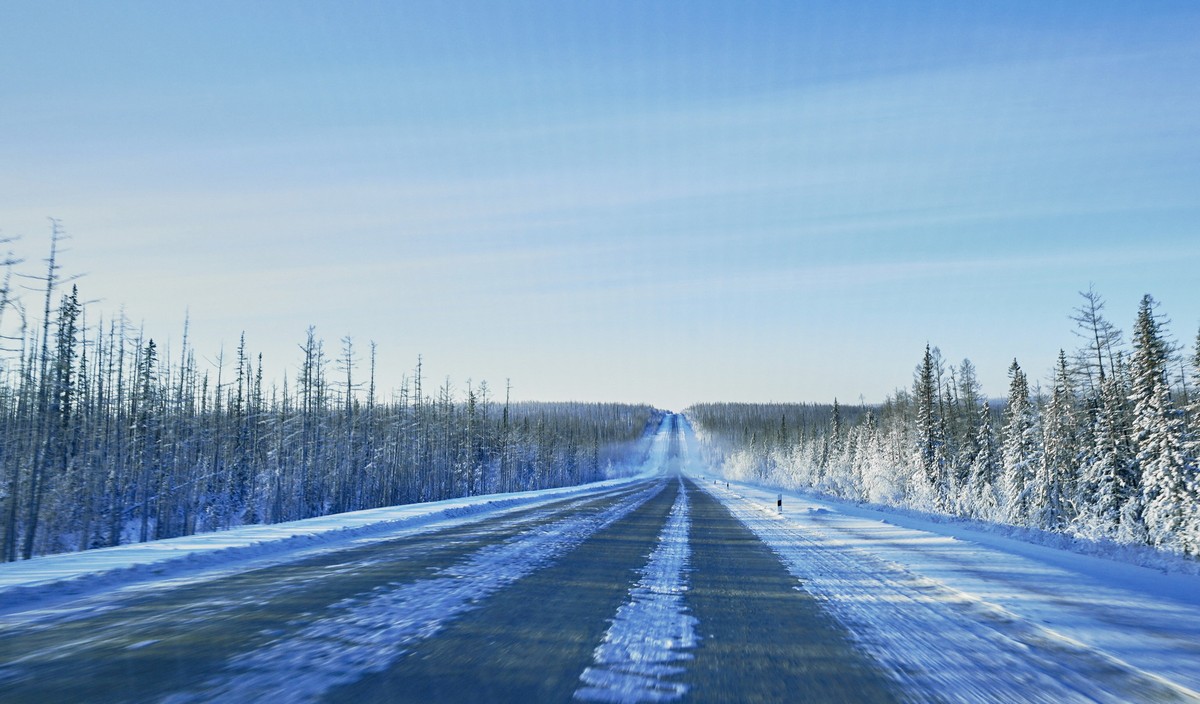 And they’ll have their work cut out for them, since the entire highway is built on permafrost. To make sure the road remains stable, what they do is cut a two-meter-deep trench across the full width of the road. They fill this with loose stone, and only then on top comes the black stuff: asphaltic concrete. And they have only a short window to do it in every summer. And all these extra measures needed will of course drive up construction costs no end: I’m not sure by how much, but it won’t be pocket change.

The following pic is the last one taken where everything is coated in white. Alas, there were to be no more like that. For around halfway down the highway from Yakutsk, it started to noticeably warm up. We could tell this by our car’s thermometer suddenly kicking into action (below -39°C [precisely!] it went into hibernation!). Of course, it was the sun doing the warming up. Indeed, it was showing its face a lot more boldly than earlier on the Lena Highway. ‘Up north‘, the sun hardly rose above the horizon for an hour or two before sinking back behind a mountain. But after just two days of driving south, it was up in the sky much longer – and we were all the happier for it, despite the lack of hoarfrost! 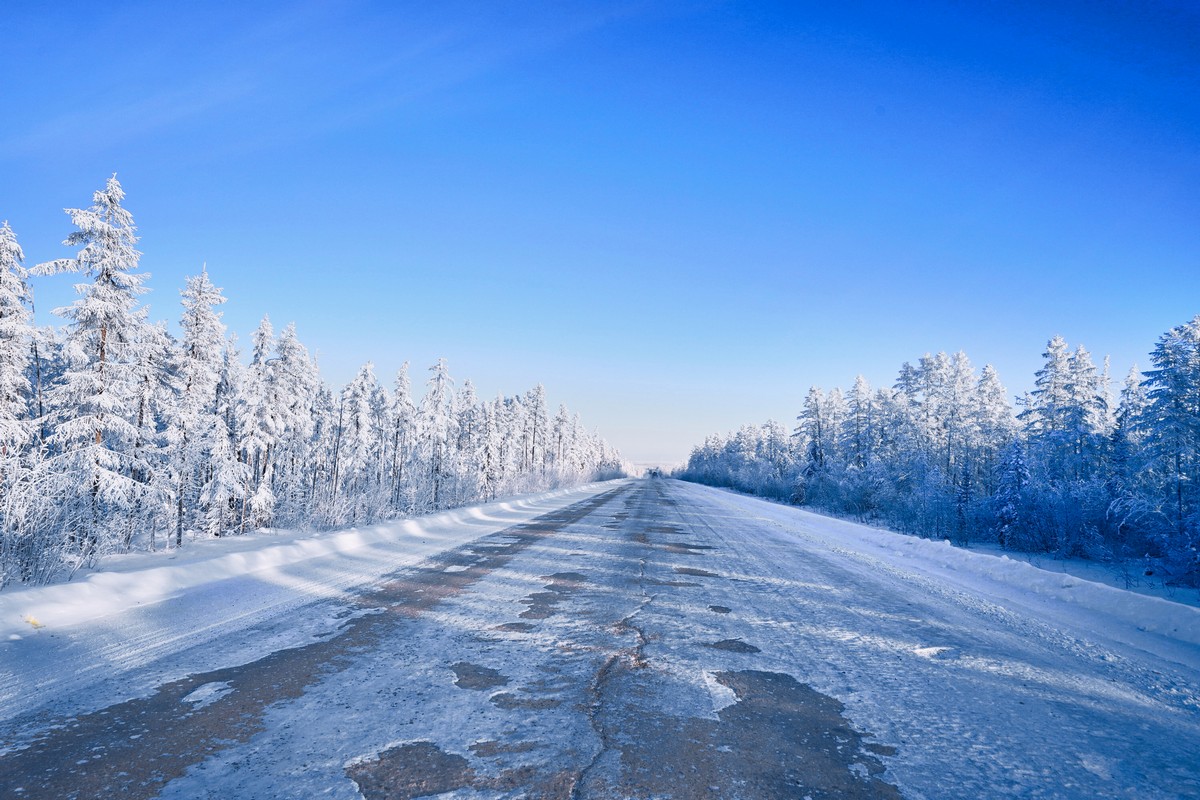 Another thing that seemed to come to life was… oncoming traffic. Grrrr. Not too much though: 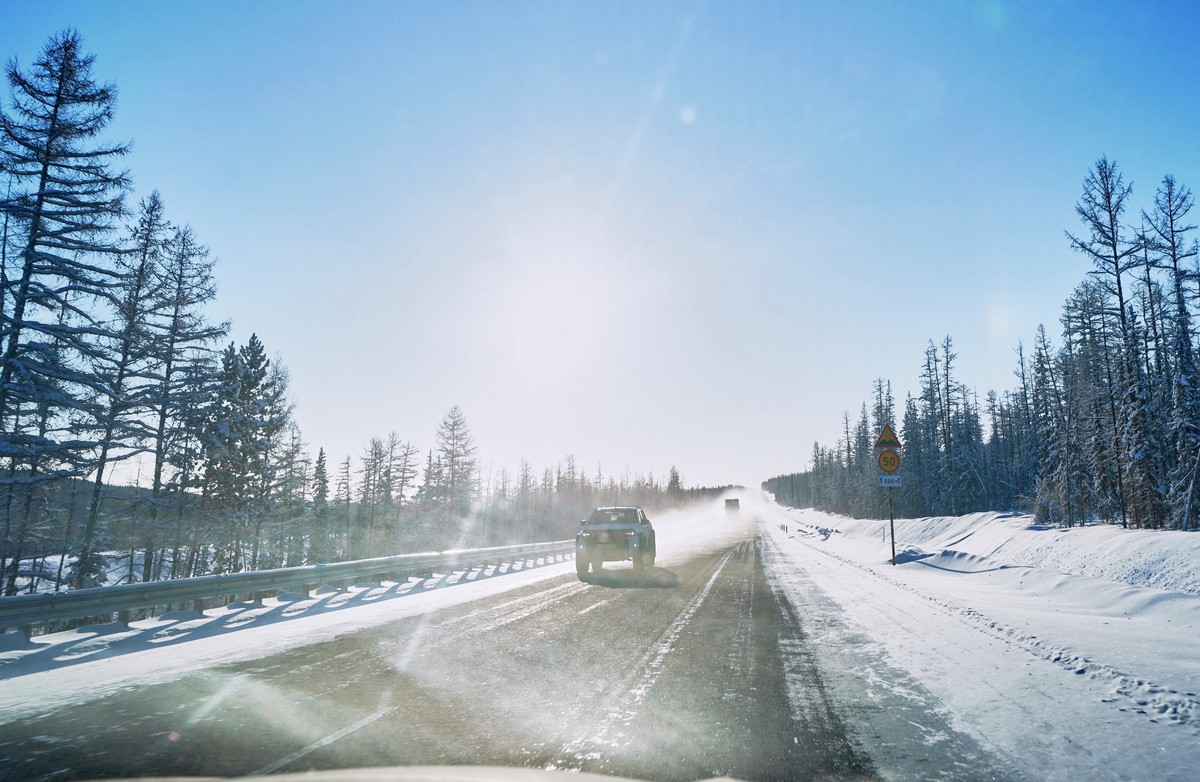 In places there were detours so as to avoid repair works: 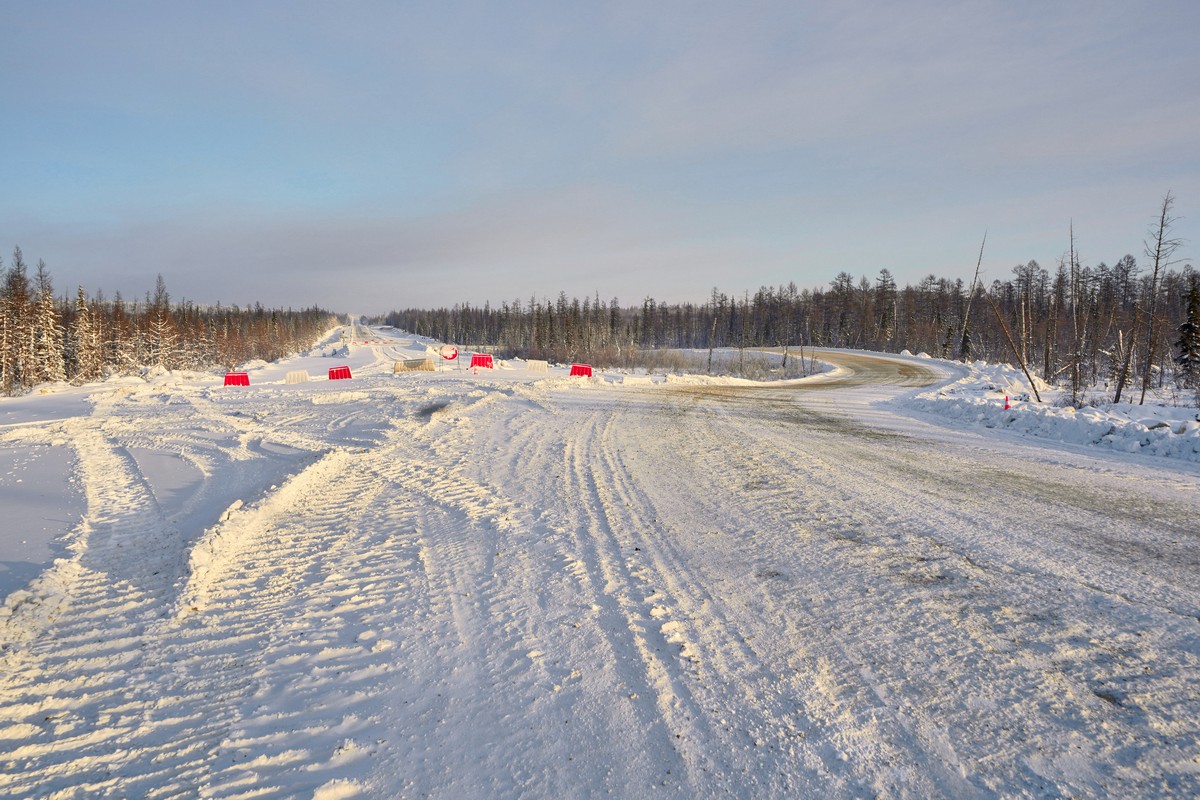 Nearby – railroad! As mentioned – all 800 new kilometers of it up to Yakutsk, and all upon permafrost! ->

We leave Yakutia, and enter the Amur Oblast ->

// Tynda is the ‘capital’ of the Baikal–Amur Mainline, a legendary railroad construction from the 70s. But more about that in a separate post… 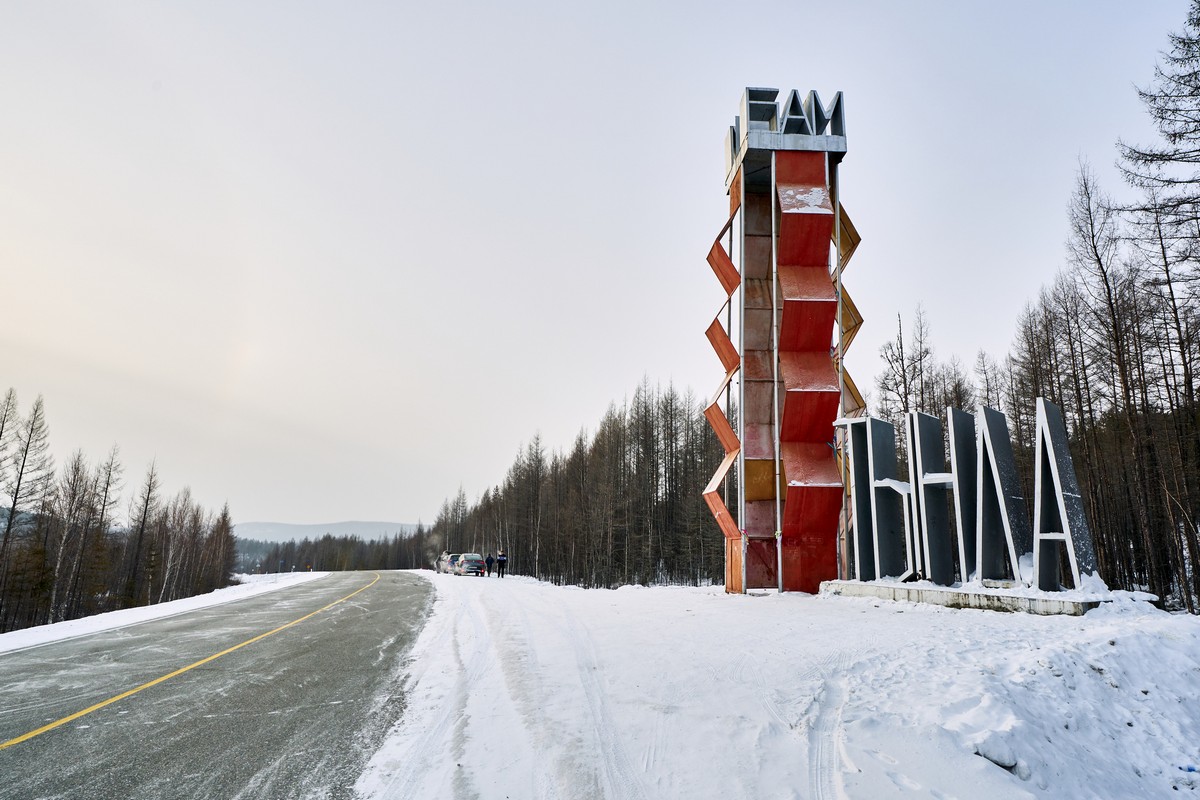