Briefly looking back over recent blogposts, I see you’ve had plenty on Katun already, including lots and lots of photos thereof. All the same – it’s still… too little! Accordingly, here’s some more!…

We’d already rafted some 200km since we started out on the river (where the Upper Kuragan joins it). Not a great deal given that its full length is 688km – from the foot of Mount Belukha to the mighty Siberian River Ob near the city of Biysk. And most of those first 200 kilometers were calm, steady, conducive to quiet meditation, and with non-stop extraordinarily beautiful Altai scenery….

Quick digression into oddness: one thing (out of many!) I find extraordinary about the Katun is how bendy, winding, twisting it is. But get this: I couldn’t find a picture/map/atlas on the net that shows clearly the full length of Katun, marked out so it’s clear to see it against the backdrop of Siberia and northern Kazakhstan! EH? For example, both Google Maps and Yandex Maps of course point out ‘Katun River’, but only one point of it – not it’s whole length highlighted! Accordingly, you can’t get a good idea of just how bendy, twisty, winding it is. This is doing curious folks a real disfavor! Because how the Katun winds far and wide though valleys amid the Altai Mountains – at one point almost doubling back on itself but in a large ~circle – is simply extraordinary! So, internet – get a grip! Or, if any of you, dear readers, might be able to find – or create – a map with it marked on, I’d be much obliged! 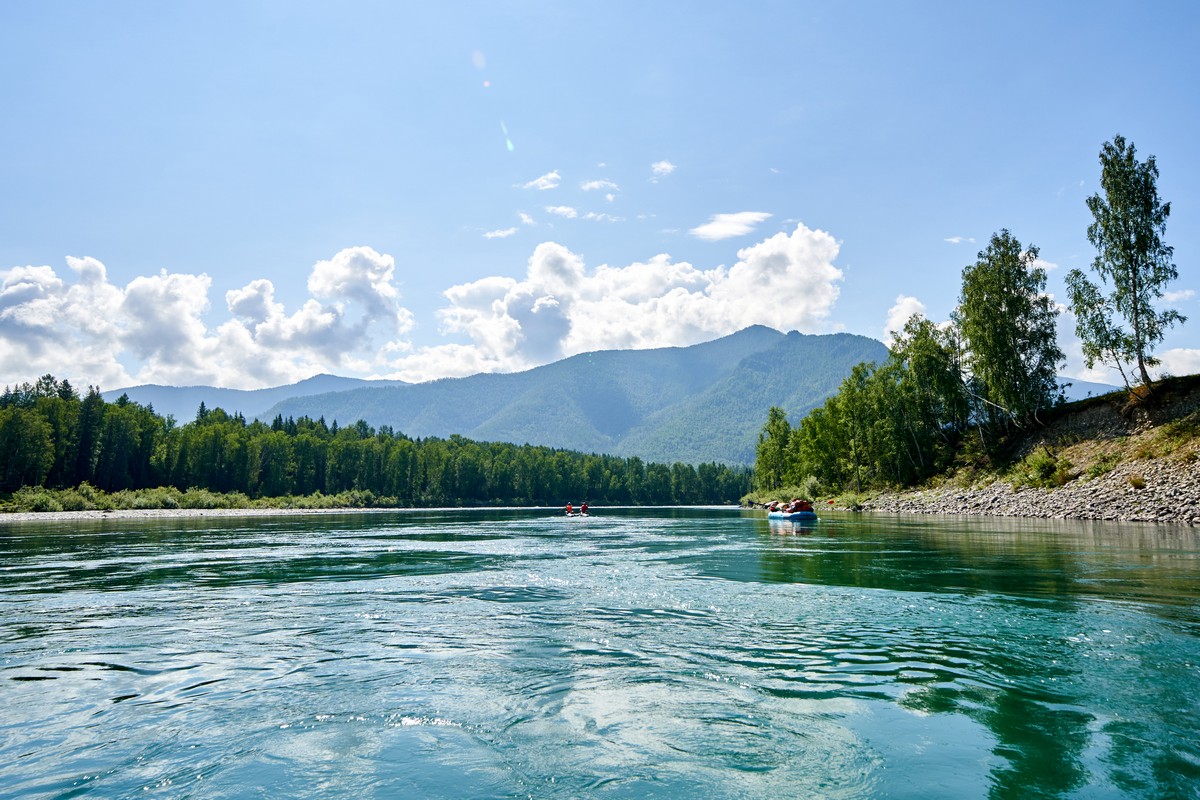 …Back to Katun – the one we rafted on, not the elusive one I can’t find the full length of on a map!… 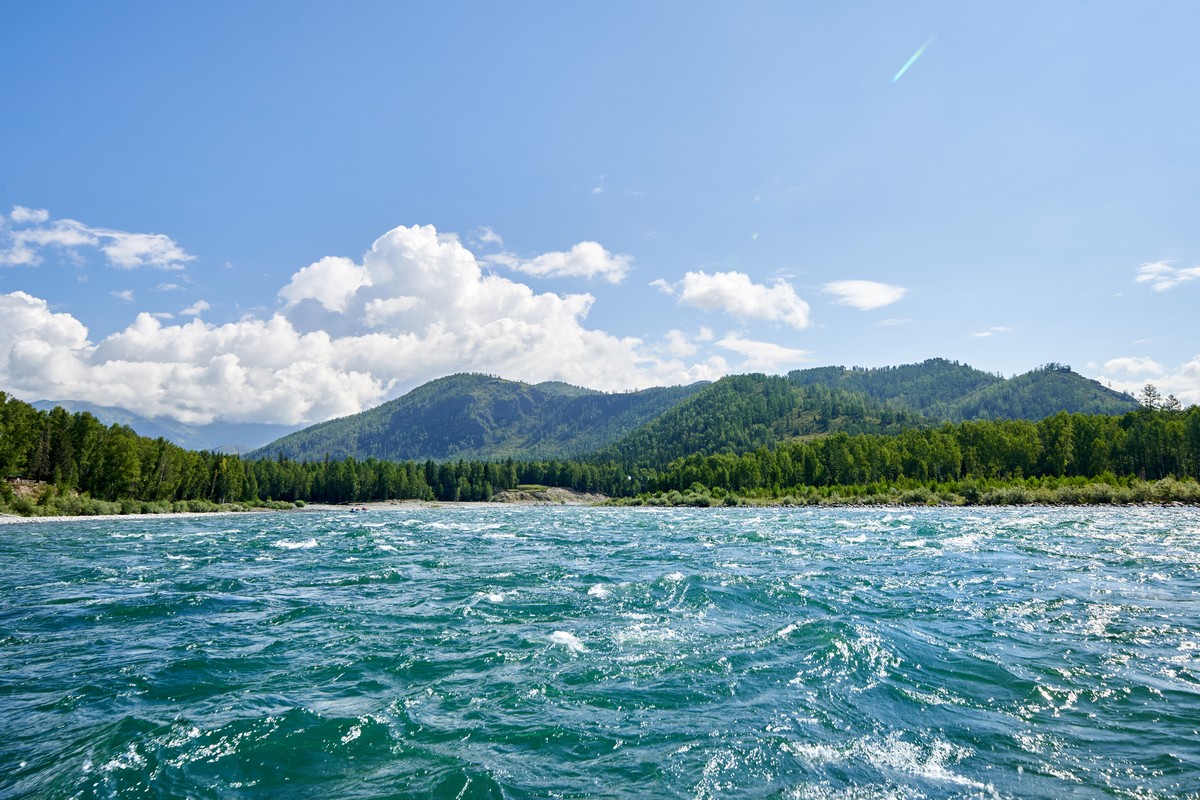 No more of this: 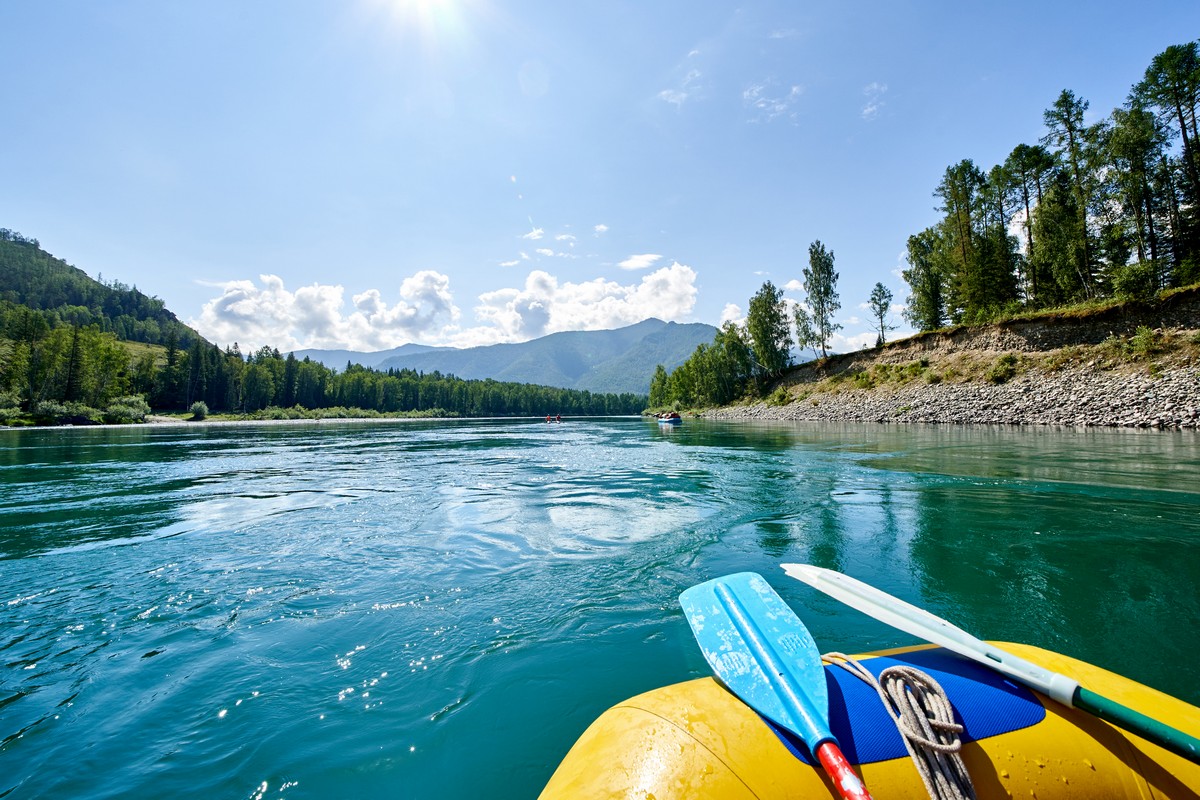 So I took a pic of the posse, still in calm, collected, contemplative Katun mode )… 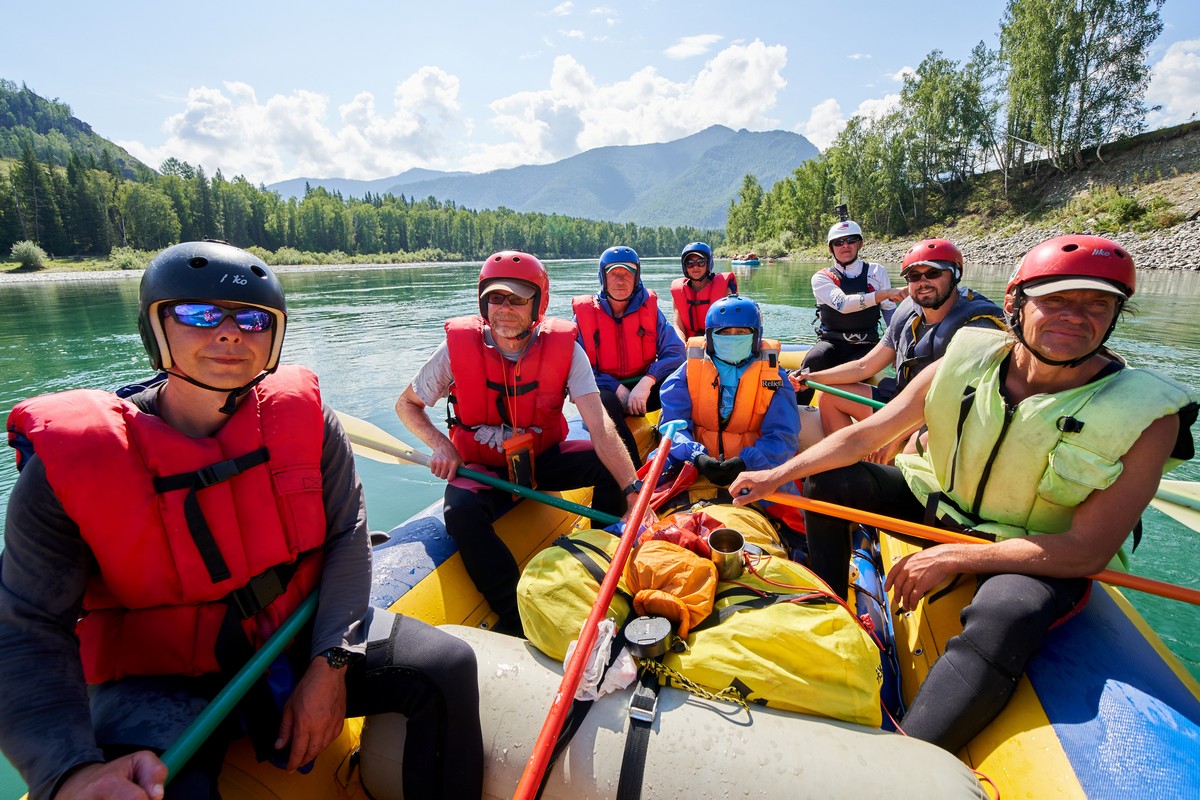 But just before things ramp up, we first pass another small portion of civilization! -> 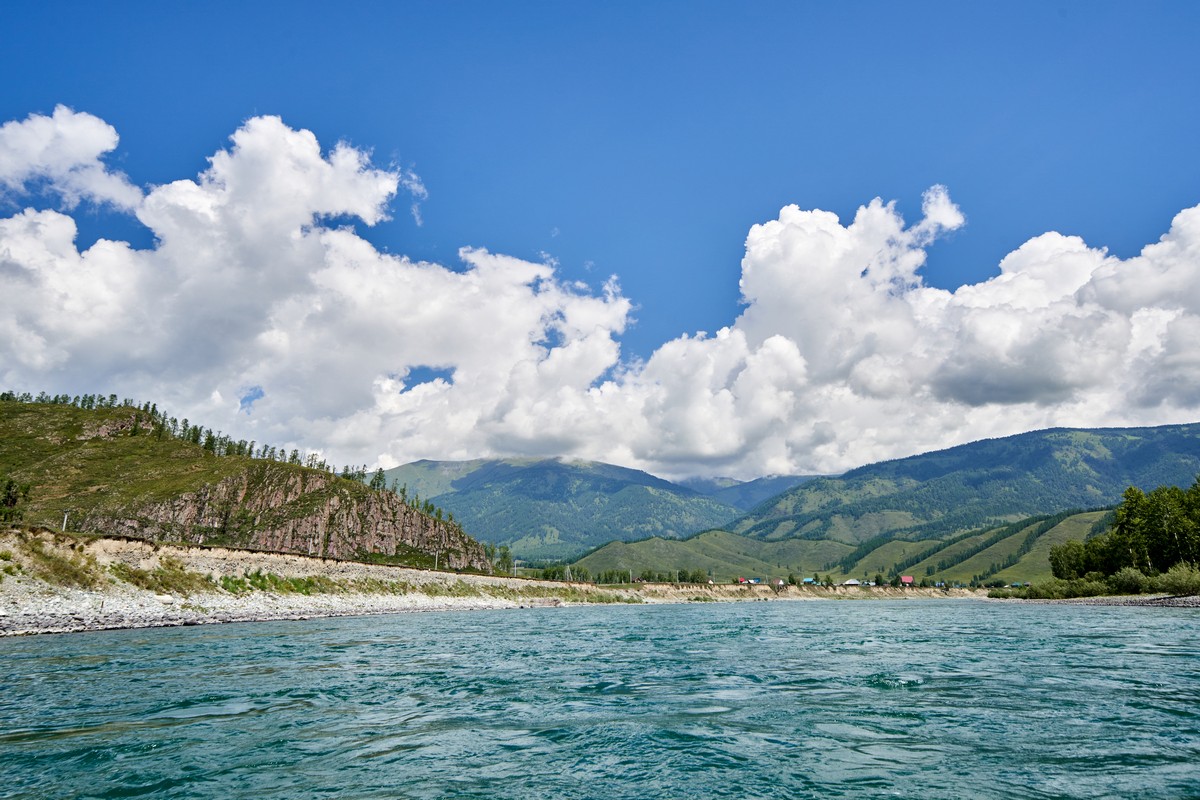 It’s the tiny village of Tyungur. It’s the place you set off to Belukha from if you’re heading there on foot. 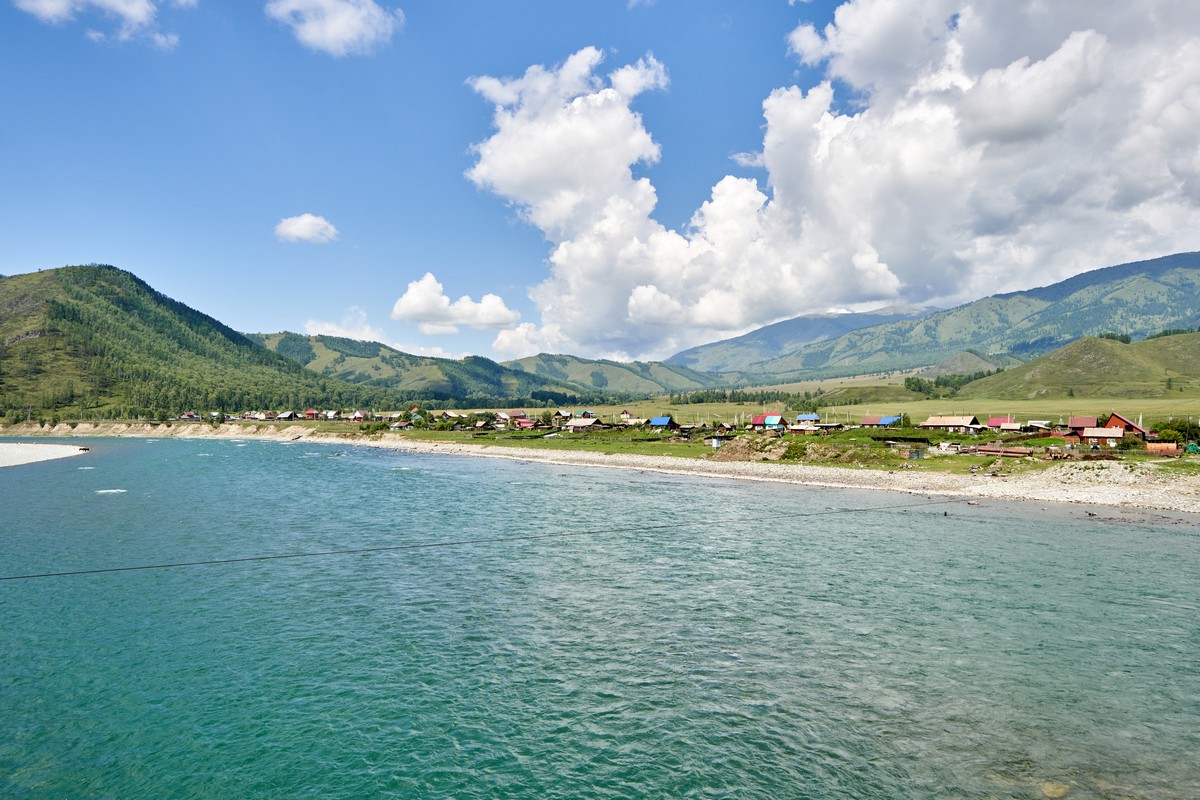 We were here precisely four years ago (just in case: I come here often). So, you can probably imagine my surprise when, out here, in the Altai ~middle-of-nowhere, a long, long way from large cities and the highways that connect them, we see this! -> 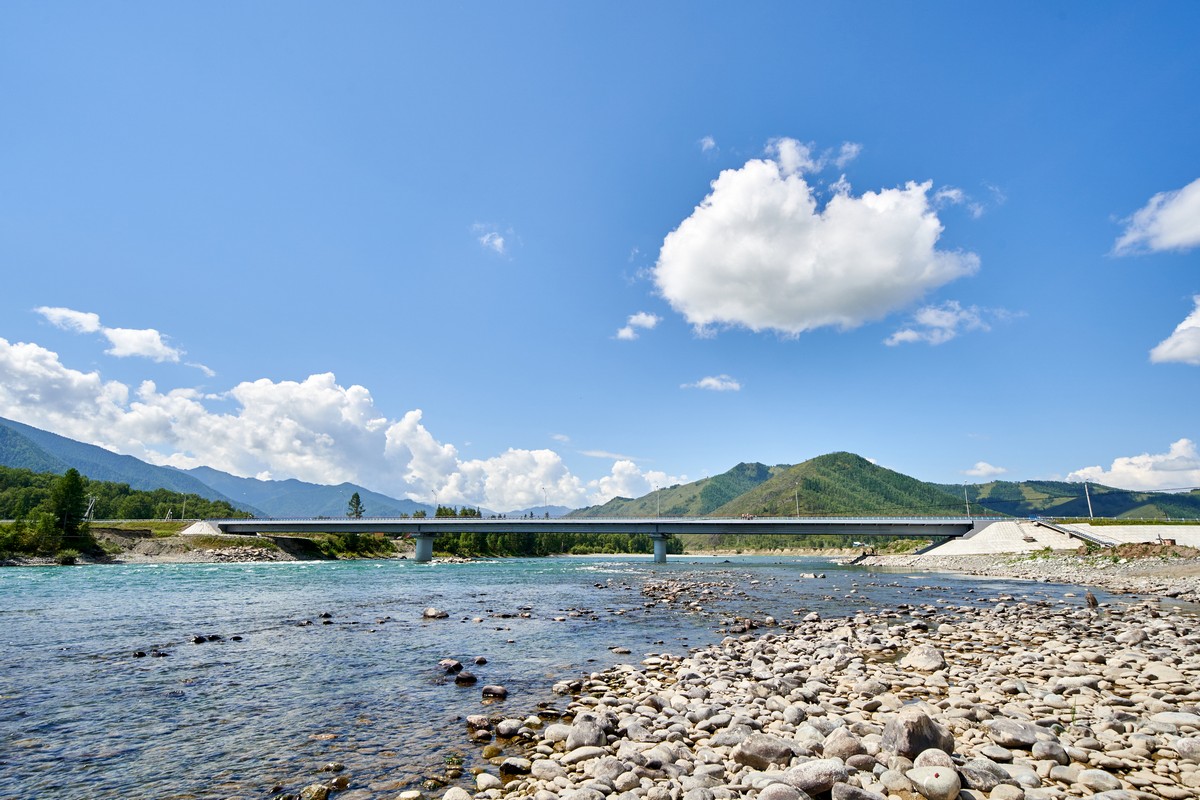 A brand new, slick, modern, reinforced-concrete road bridge! Or maybe you can’t quite imagine my surprise?… 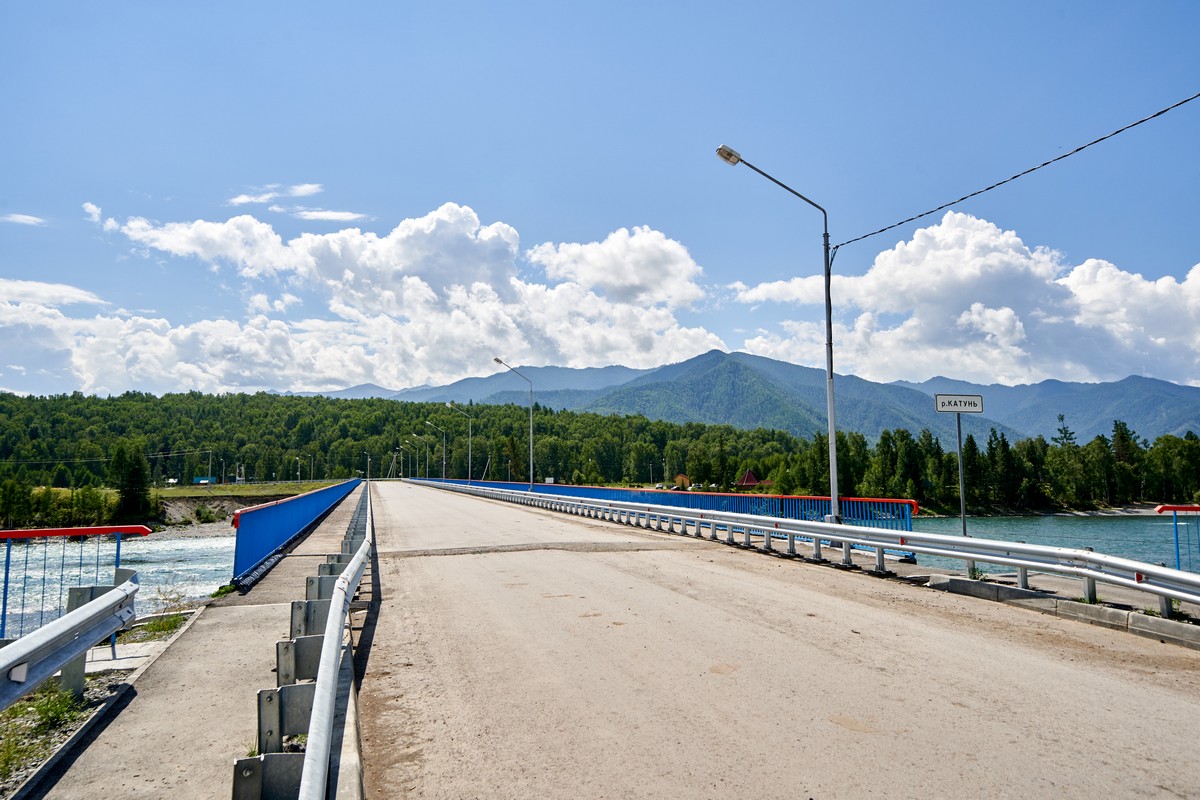 …Maybe you will when I show you what was here in its place four years ago! -> 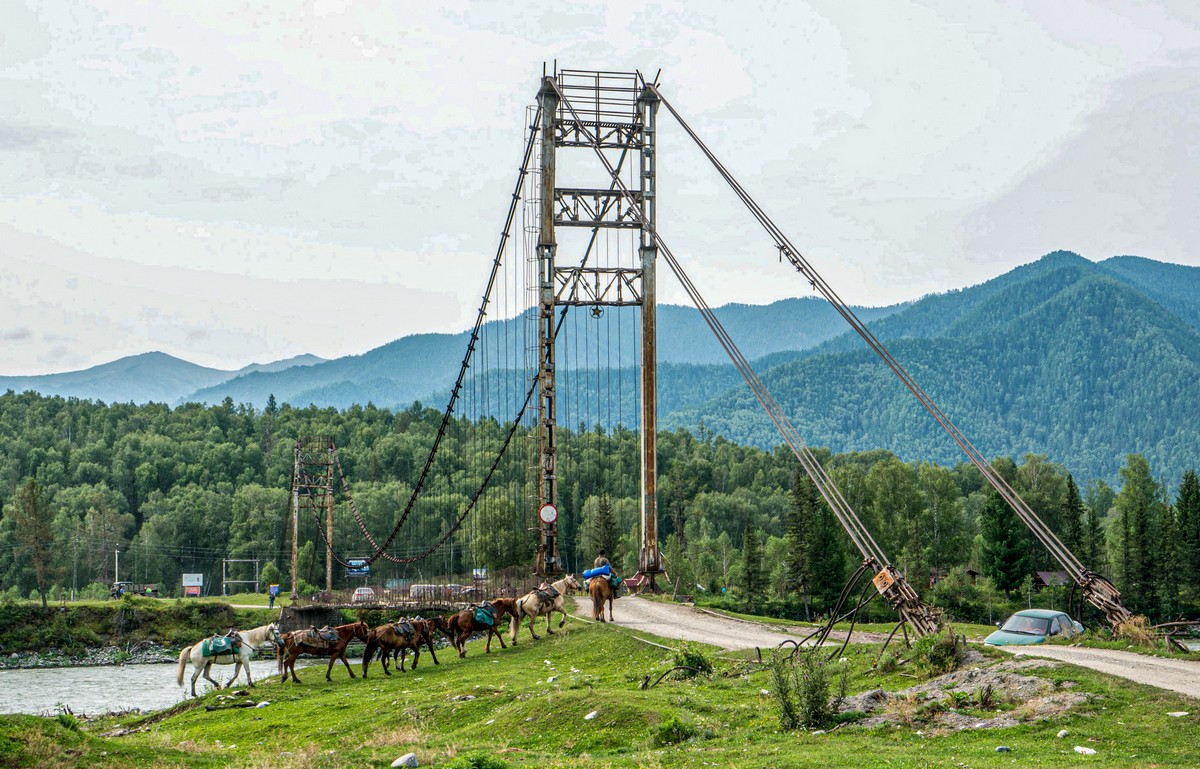 Oh yes. That bridge was so… questionable in terms of strength, that we were advised to get out of our vehicles and cross on foot (taking our backpacks and other belongings with us too), separately, so as not to overload the bridge and tempt fate! 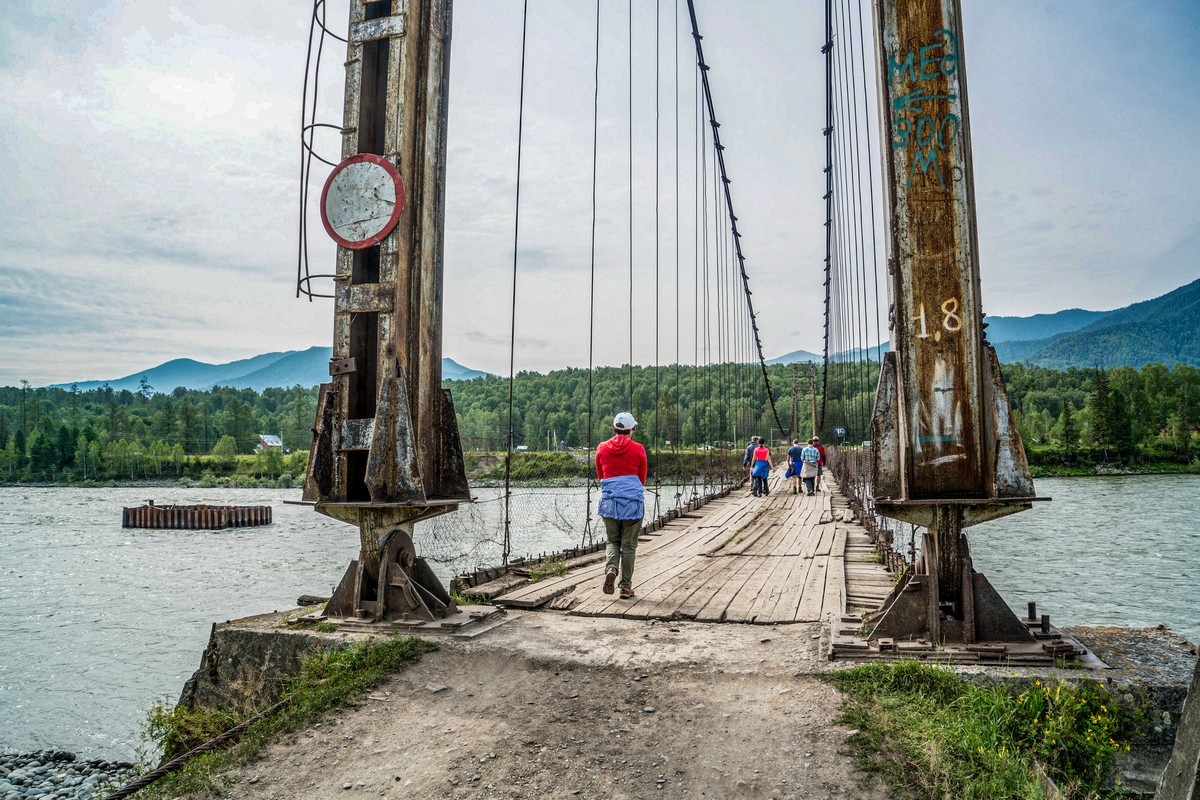 Hmm – did the old one have more character? There’s not much fun in cold slabs of concrete now is there? )

I was so astonished – I decided to have a stroll across it. And an enjoyable – assured – experience it was too! And the views…

A tale of two… sides of a bridge!…

Here’s one side – with a seeming continuation of the urbanized modernity and civilized nature of the bridge:

Meanwhile here’s the other side – for some reason whose traditional rural essence wasn’t changed one bit! -> 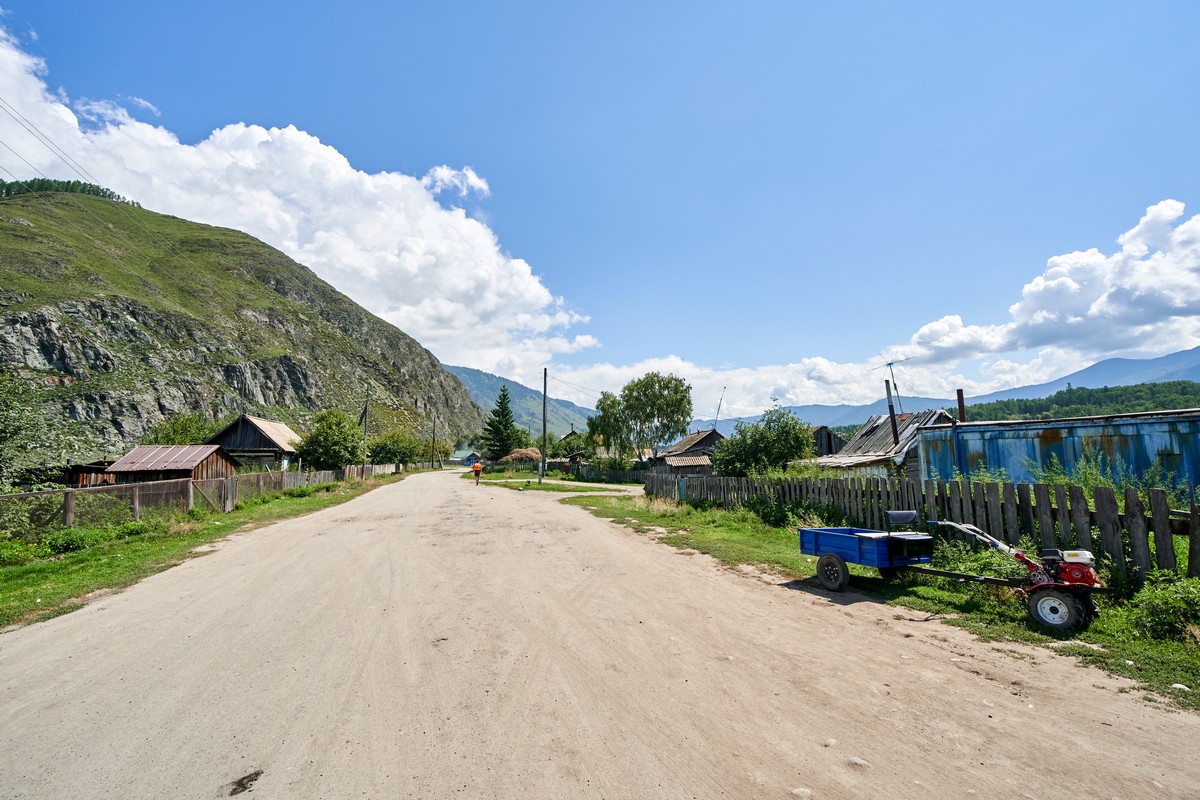 Hmm – let’s hope the rustic appearance of rest of the village one day catches up with the modernity of the bridge and (on one side) central street: 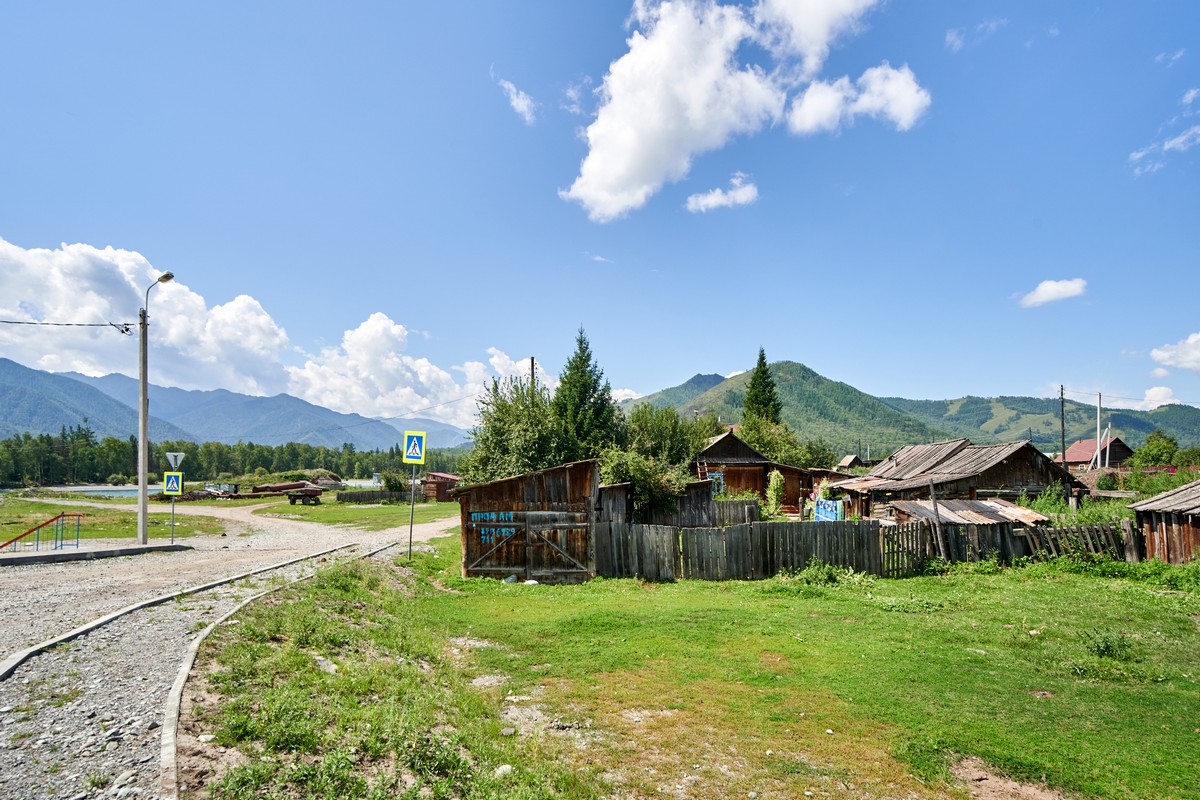 Over there – the highway: 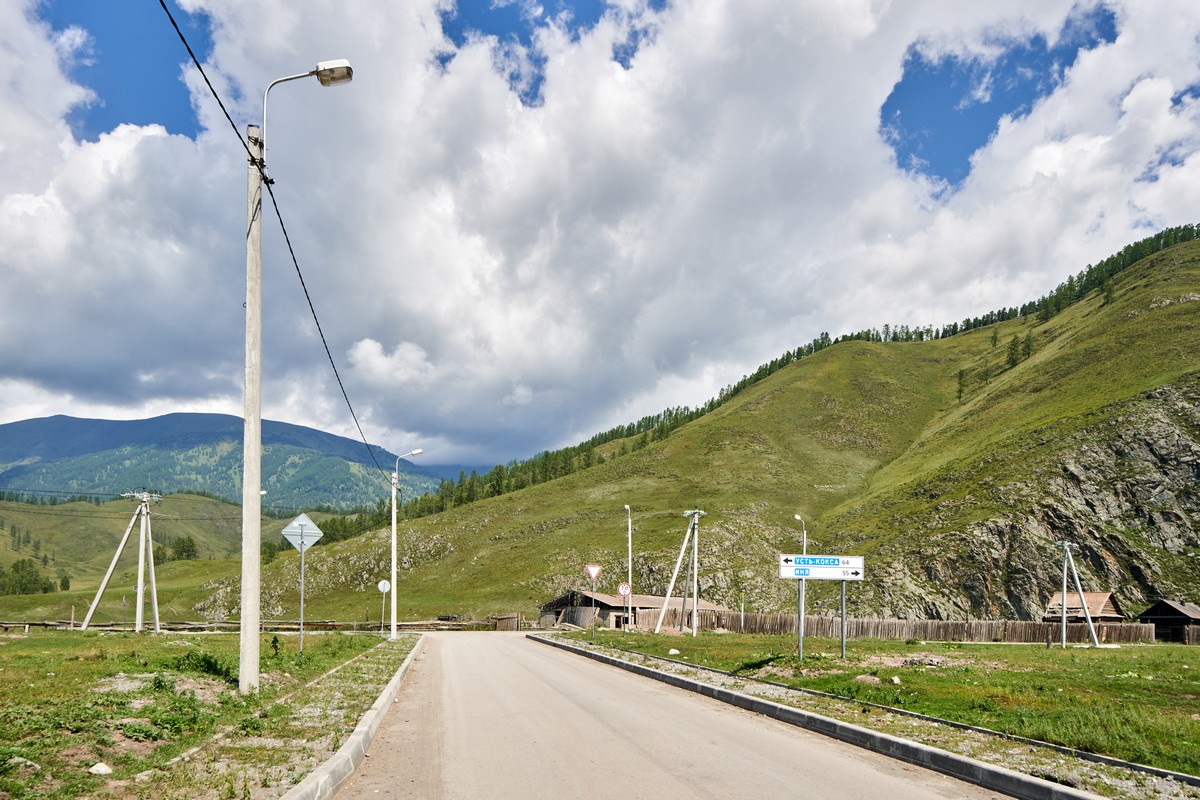 But the sign there is a little too… optimistic. There’s no road to ‘Иня’ – Innya. You can only get there on foot or on a horse across paths, fields and mountains. If you’re daring you might make it on a bicycle or motorbike. But even the most off-roadest vehicles in the world won’t make it. At least today. Maybe this sign is a sign (!) of a bright future that’s sure to arrive. I wonder when? Actually, I have a feeling it will be sooner rather than later judging by the boldness of the get-sh**-done move to build the bridge )… 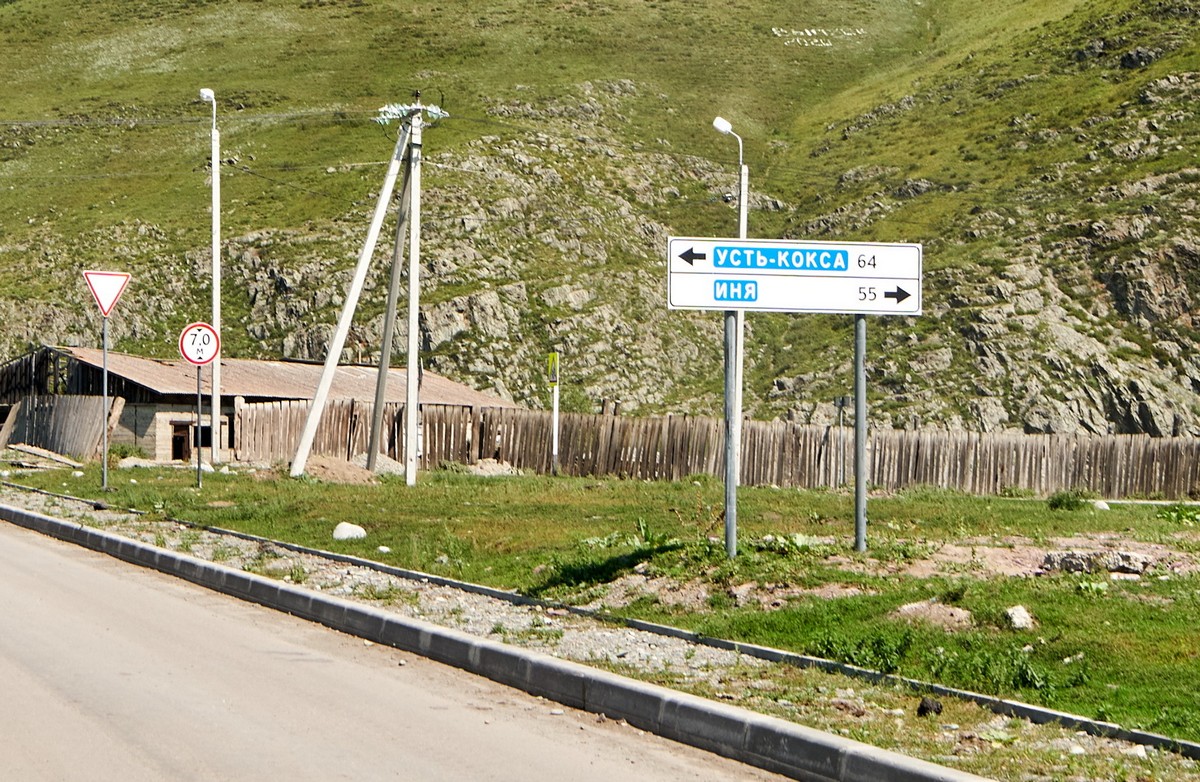 The rest of the photos from Altai-2020 are here.