Our first destination was mount Belukha. It’s famous – but only in certain circles. And that’s a pity, because the place is absolutely stunning! Beautiful, monumental, enormous. There’s snow, glaciers, colorful rocks, bright greenery, white rivers (“glacial milk”) and white foamy mountain waterfalls with the purest, tastiest ice-water. But we decided to begin with the Stone Town – a cult place of interest for connoisseurs and fans of Roerich and his secret forces of nature in search of an Altai Shambhala. A short walk along the Jarl gorge brings you to the stream of the same name (see here).

The Stone Town did not meet with much enthusiasm. One of our group called it a collection of locally-sourced construction materials in a cult site.

But the colors of the surrounding scenery are out of this world! The rocks are orange, red, purple, white, and some an absolutely unearthly color – a kind of nickel-silver. 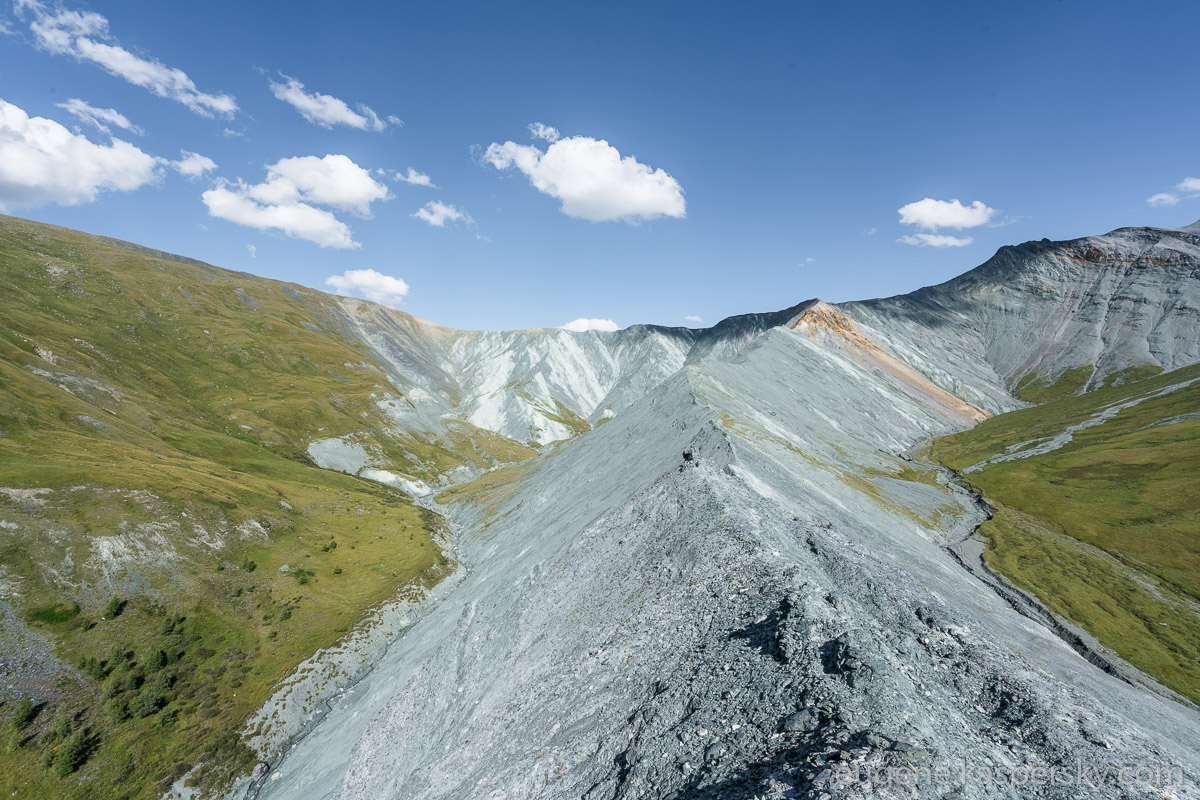 You could sit and stare at these scenes for hours on end, especially from the top of the colorful mountain ridge that divides the valley in half. 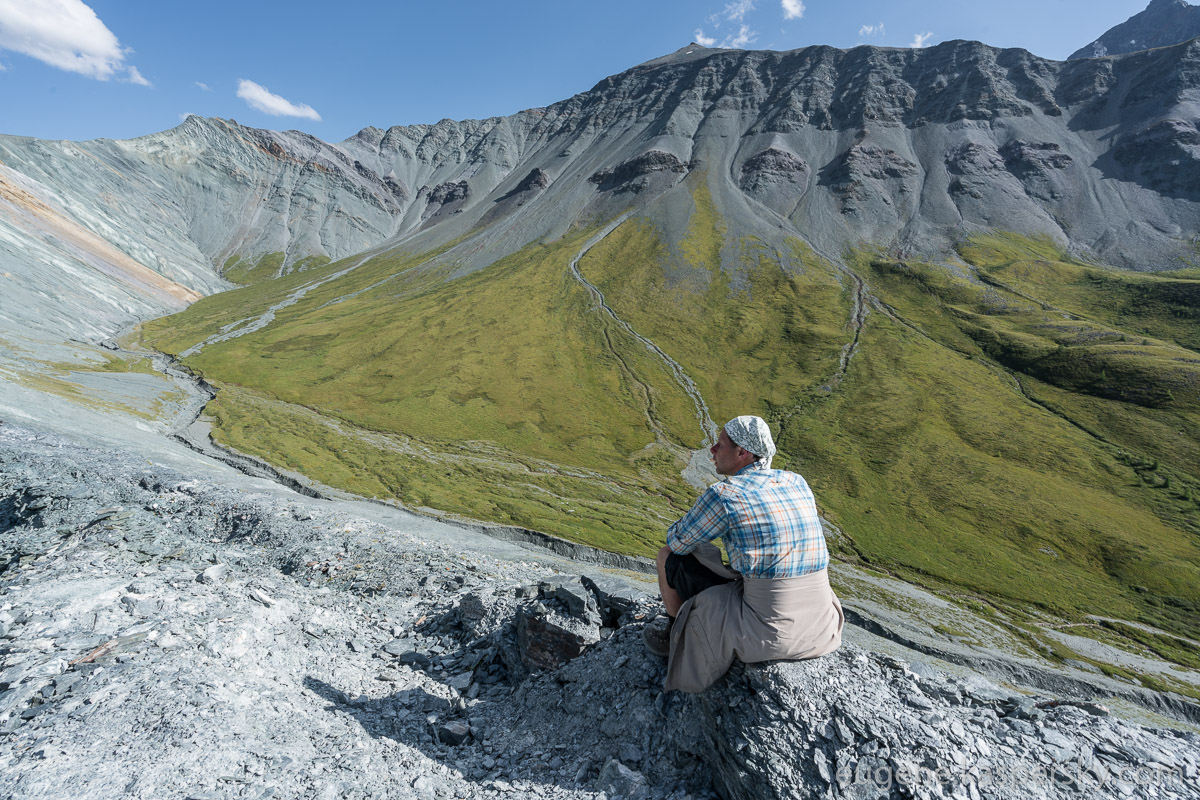 You want to meditate looking at these wonders of nature. Then, when your brain is cleared and enlightened, your thoughts begin to wander, and after a brief discussion with your companions, who are also looking at the landscapes, the following maxims may come to mind (recalled?): “The first nonalcoholic expedition to study the upper layers of prana”. It could almost be about us, on top of a multi-colored mountain ridge.

And you do definitely get a strange feeling.

Some force or mysterious energy penetrates into your being and… it’s difficult to explain. It’s probably clogged chakras being cleared. “And if you stand upright, the energy rises so that it nips the skin on your head” – this was written after me in the travel diary. However, maybe that was just after my closely cropped skull got sunburned :).

But it’s now time to leave the astral and slowly, meditatively set off for our next destination. 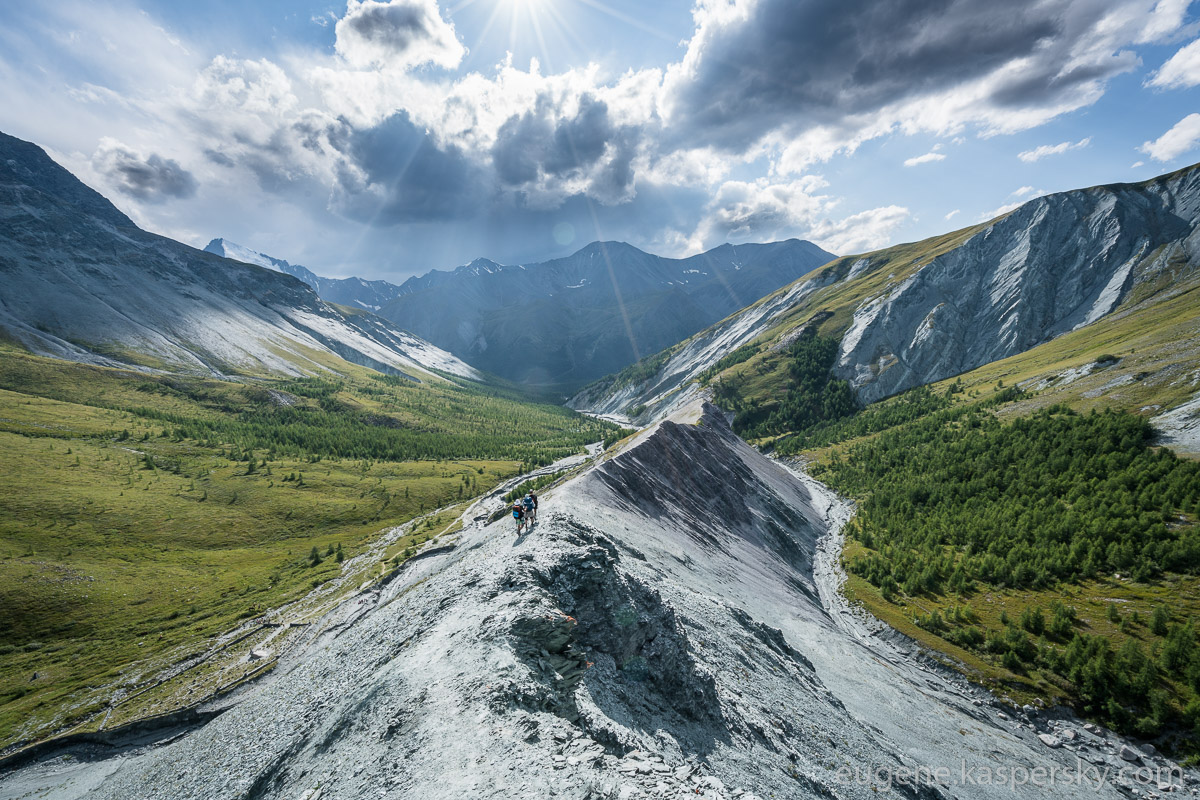 But I have a dream: when we come here next time (and we must definitely come back here again), we should go along the whole length of the mountain ridge, then travel up the left side of the peak and down to the path there and the stream. Like in the picture below: up the right side of the ridge, then to the left and back through the woods. 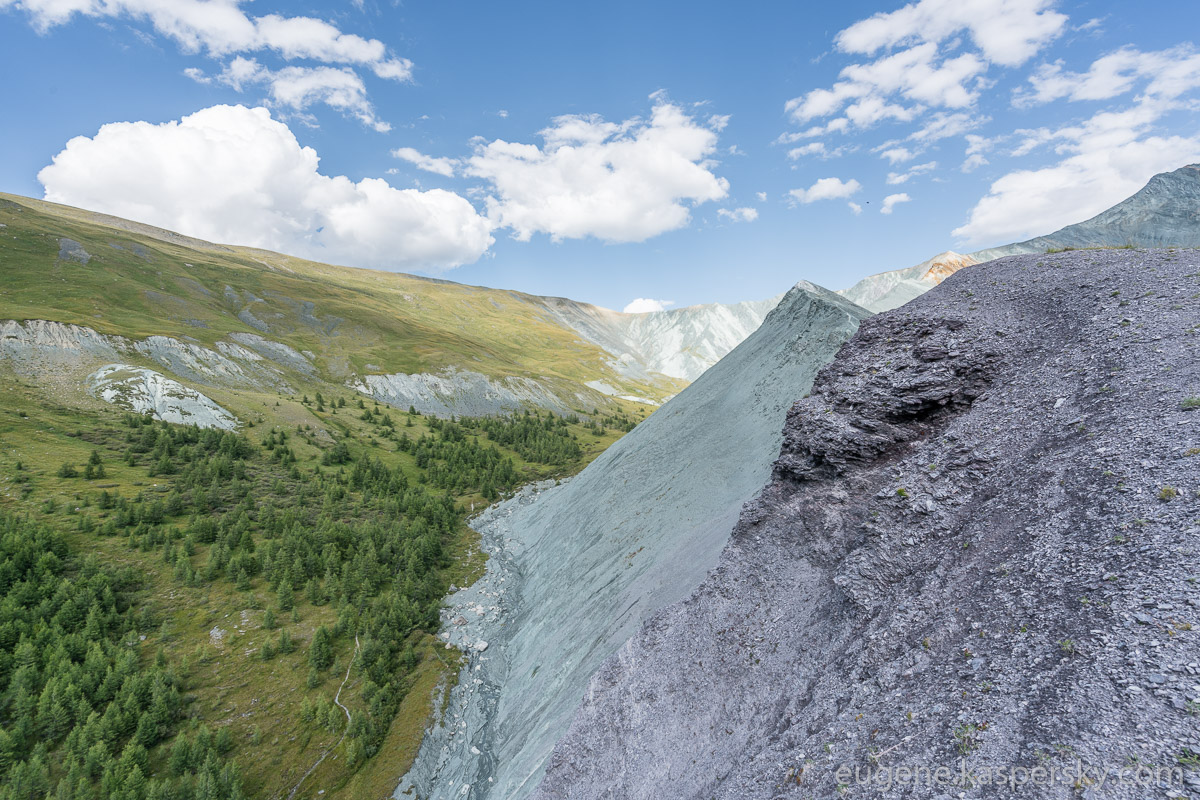 Mount Belukha attracts you with its grandeur. The white peaks (there are several of them), the sheer glaciers… the powerful enormity leaves you enraptured.

But we had no plans to climb it. That would be a far from straightforward endeavor, even though the mountain is ‘only’ 4509m high. Climbing Belukha requires special equipment and training. We had neither. Anyway, our route was called “Big Water” – not “Sheer Ice”.

But a walk along the valley towards the glaciers is a must. We didn’t have enough time to reach the glaciers, but climbing them wasn’t part of our plans. Nevertheless, we did have a lengthy walk.

A reminder for next time: we definitely have to get to the base camp on the glacier and spend the night there to watch the evening and morning views of Belukha. It’s over there, along the stream between the moraines. 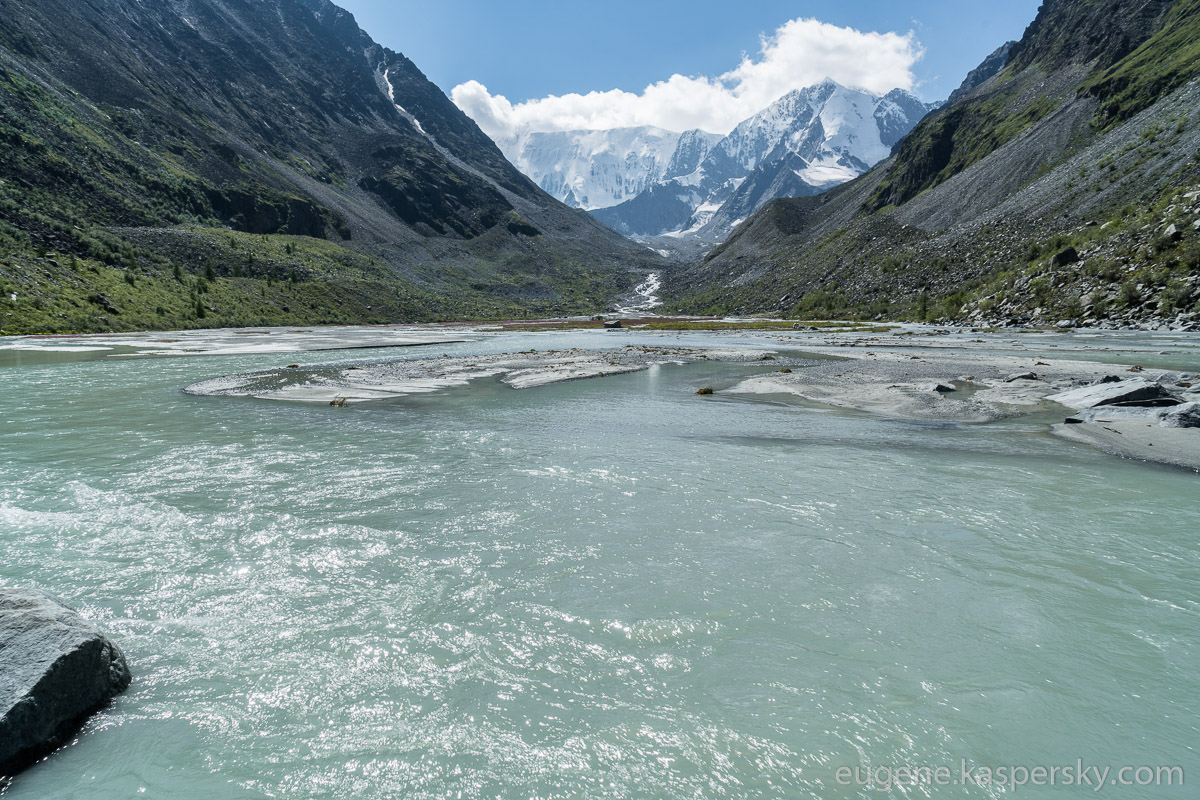 Be aware that these places are located in a border zone, meaning permits are required and they should be obtained in advance.

We contented ourselves with a short walk around the Orthodox Chapel (called the Church of the Lost Climbers), and then continued on our journey.

Now a few words about the transportation side of our expedition.

How do you get to Belukha, its glaciers and the surrounding multi-colored rocks? The shortest route is by plane to Gorno-Altaisk, and then 440 km by car to the Tungur village. Part of the way (about 160 km) goes along the famous Chuya Highway. This part of the road is quite flat, with an asphalt surface, road markings, new road signs and some nice views.

After the turn to Tungur, asphalt is less noticeable, replaced instead by bumps, potholes and dust. But the surrounding views are closer and more pronounced. 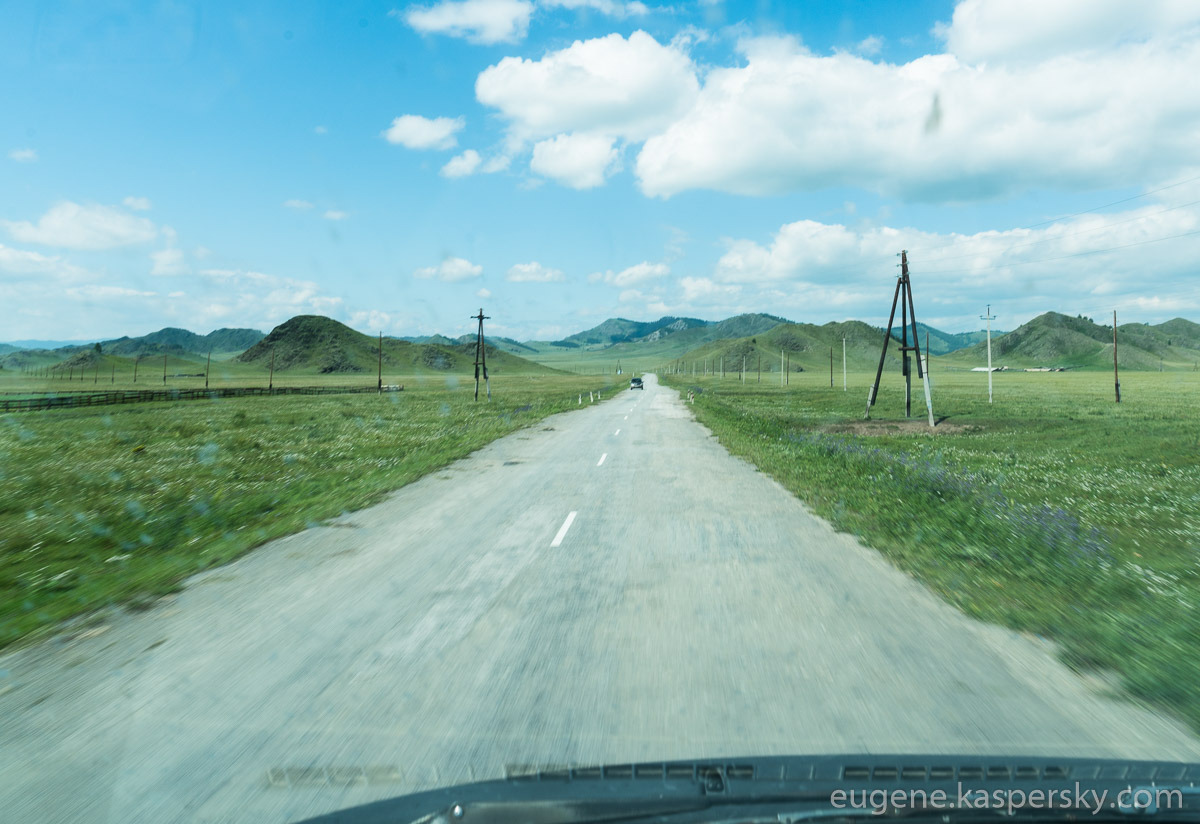 Travelers usually get to Tungur in the evening. Here you can camp in tents or spend the night at tourist centers with separate rooms, a shower, Internet access and a sauna with a swimming pool.

And at first light we set off for Mount Belukha.

We could, of course, fly by helicopter, but this option was considered unsporting. The other options were on foot or on horseback. We chose the happy medium: our bags were carried by the horses, and we walked with light backpacks and other light luggage. Oh, and part of the way, over the first mountain pass, we traveled in a GAZ-66 truck along roads like this:

After that it was all on foot, and we didn’t take the shortest route: in order to see as much as possible and to meditate, we took a roundabout way, over mountain passes.

However, the first days of meditativeness were overcast, and the dampness that regularly fell from the fluffy white clouds was not very conducive to meditation.

But it was easy to imagine that the heavenly beauty, full astral and the upper layers of prana were right there, behind the clouds. The guides readily agreed, saying that “good weather in Altai happens several times a day”. These were encouraging words during the walking part of our expedition :).

The waterproof bags look both a little bizarre and rather comical set against a backdrop of horses. 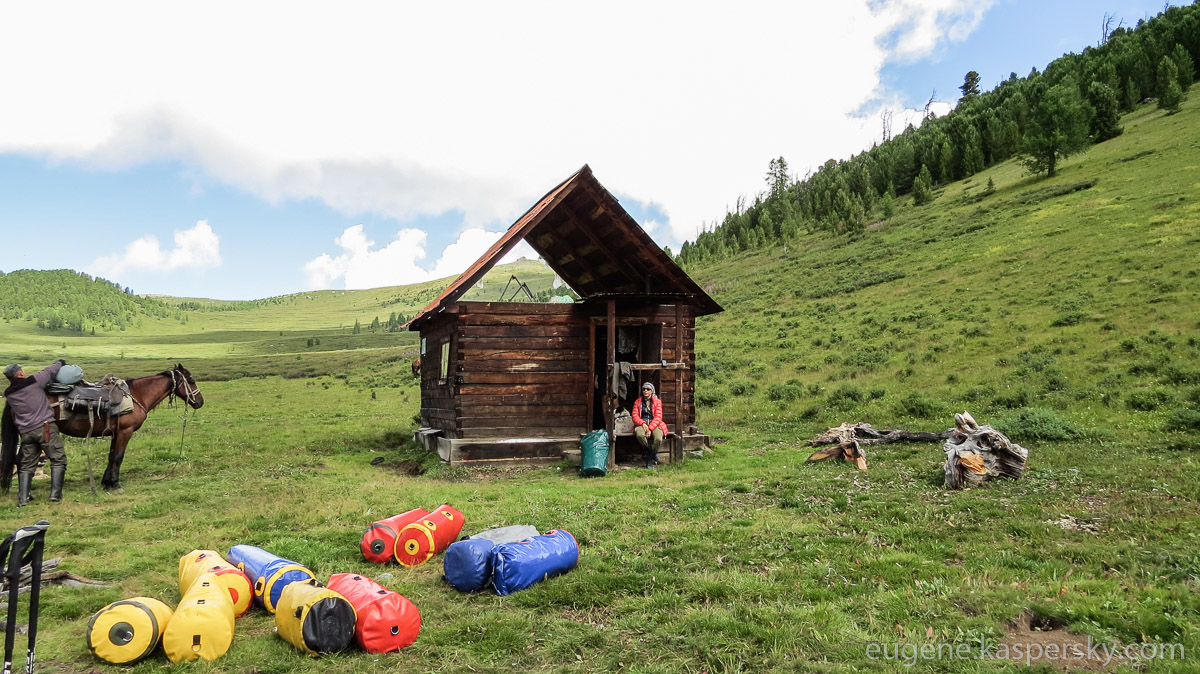 Eventually we reached the mountain pass where we got our first view of Belukha. Wow! 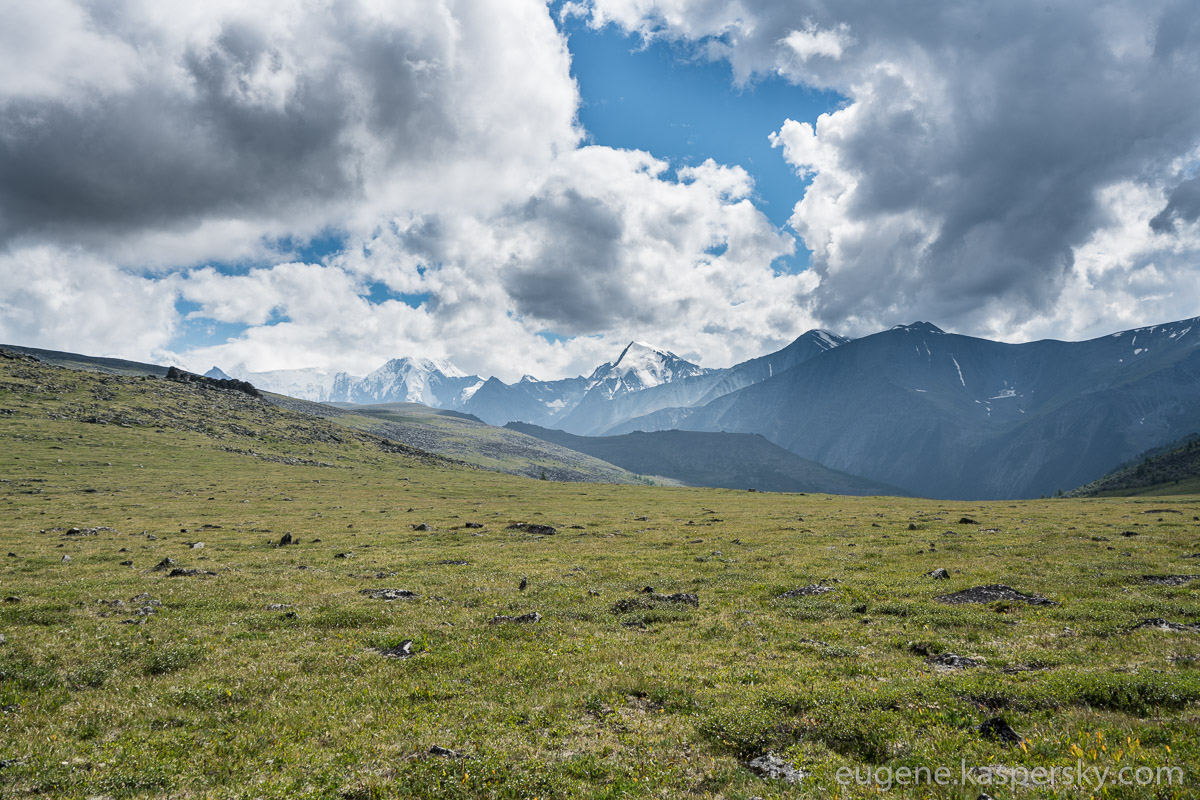 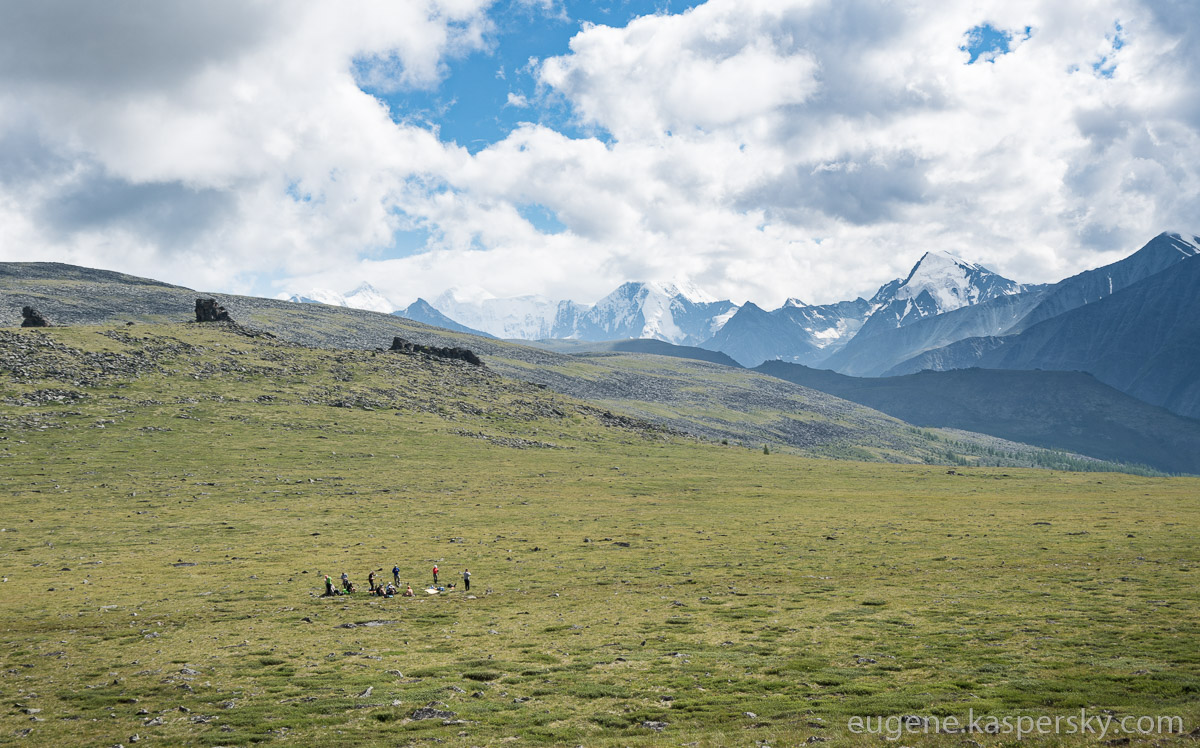 By the way, this mountain pass was the last point where we could use a mobile phone until we returned to ‘civilization’. Further telecommunications were impossible, except for satellite communications, of course. 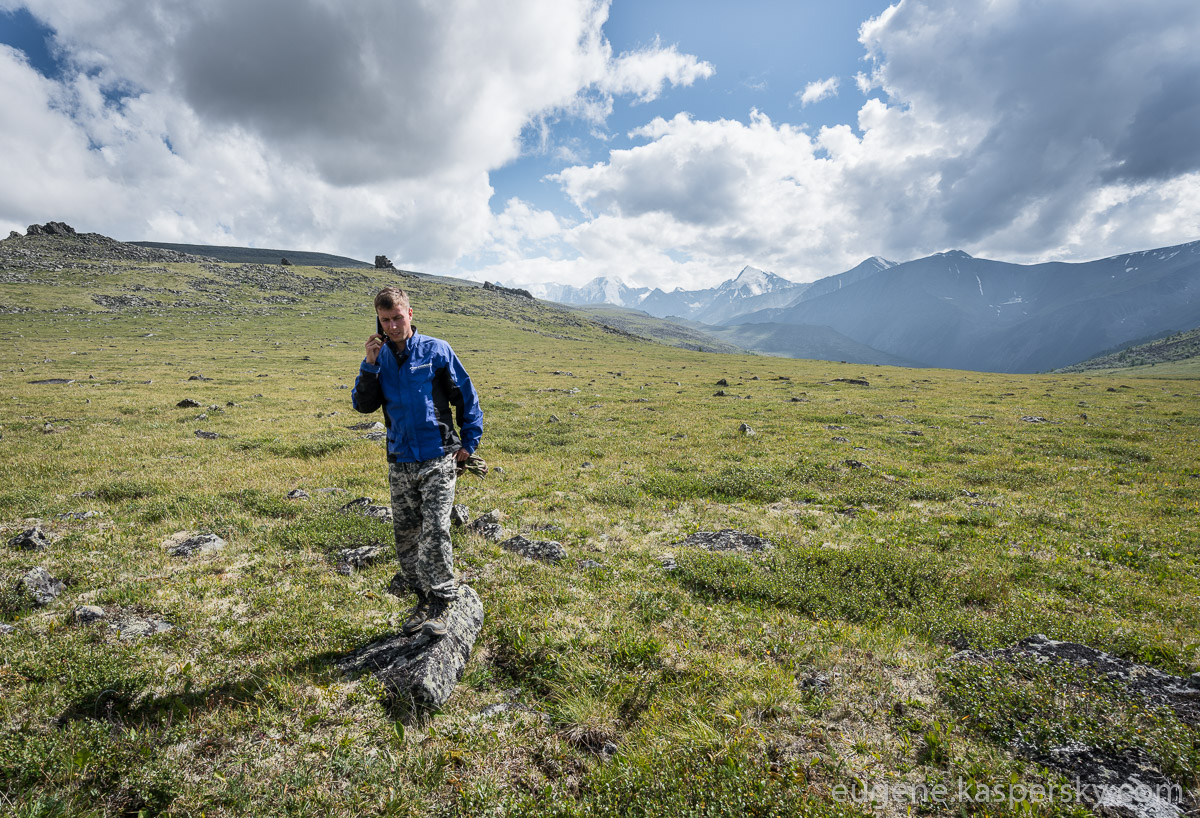 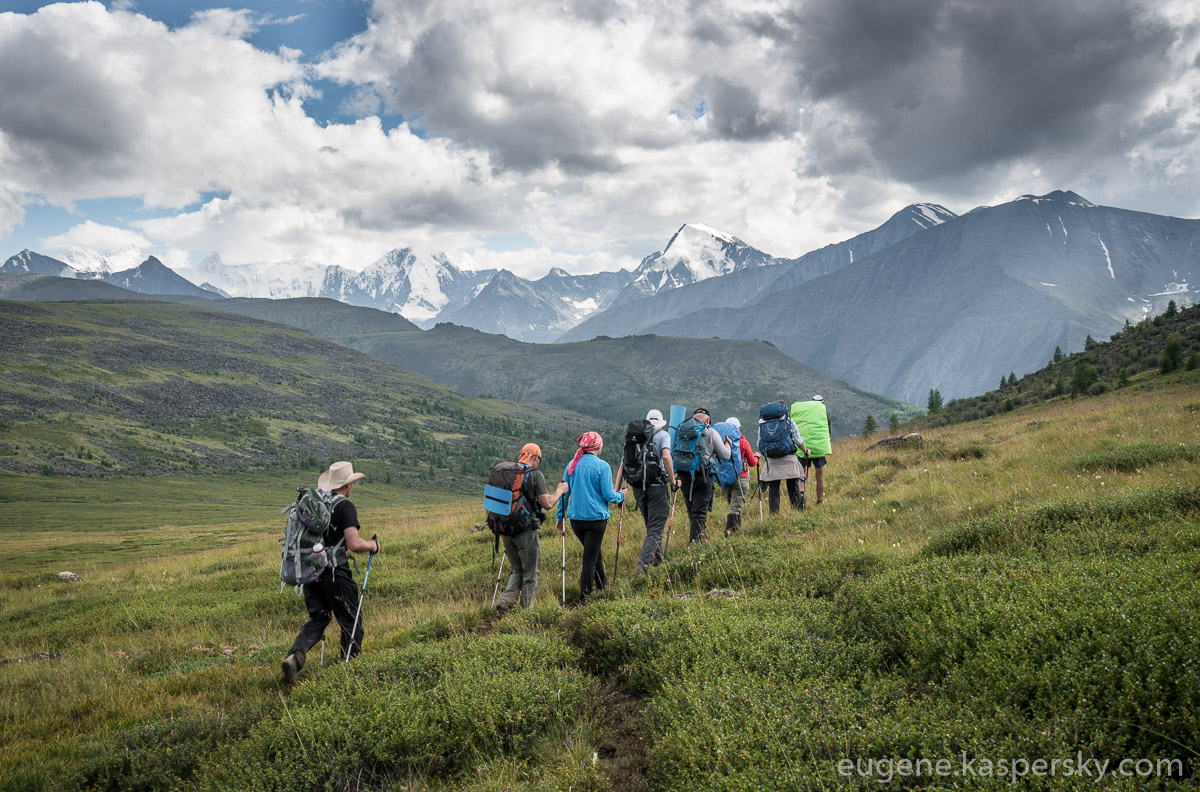 But first of all, we took a walk along the local buttes – isolated hills with flat summits that had been worn away by the passage of time.

And then we walked up and down the hills, which were quite steep and rocky in places, enjoying the views covered in sweat and feeling sorry for the horses. Even though they had ‘four-wheel drive’ they still slid and stumbled in the same places as we did.

Belukha is getting closer and closer… 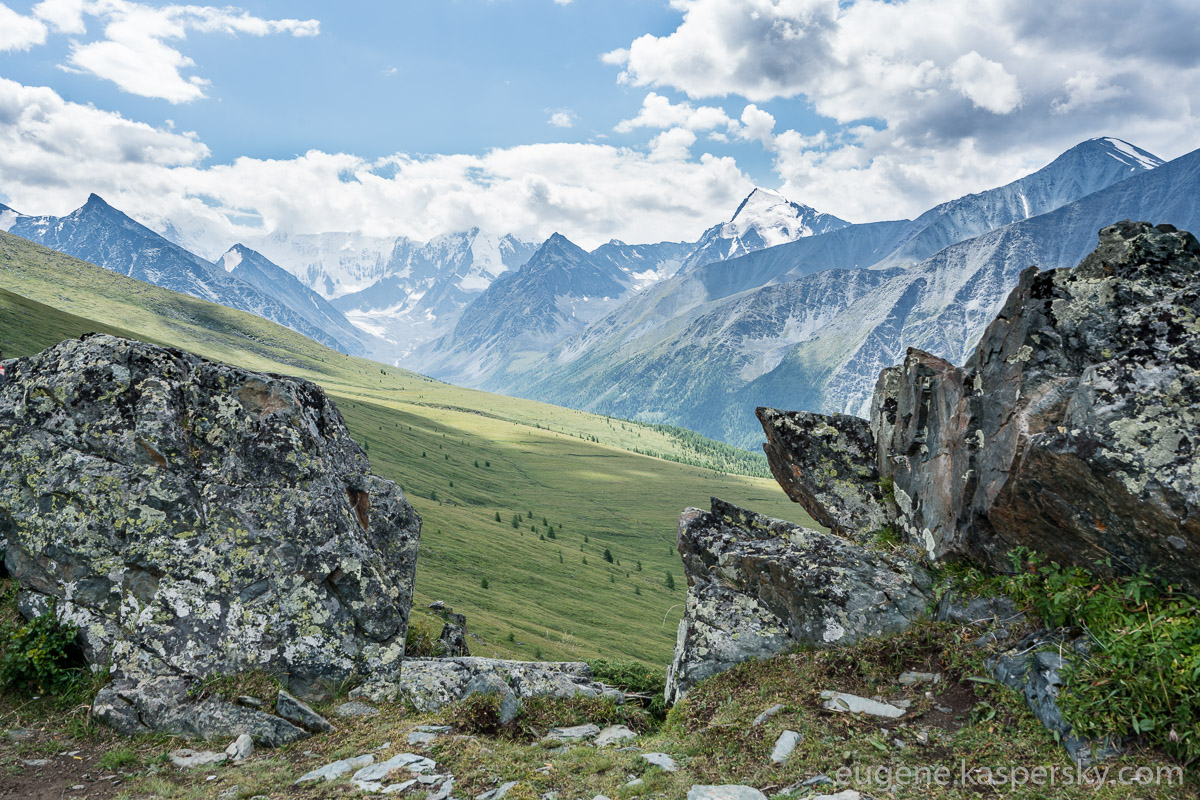 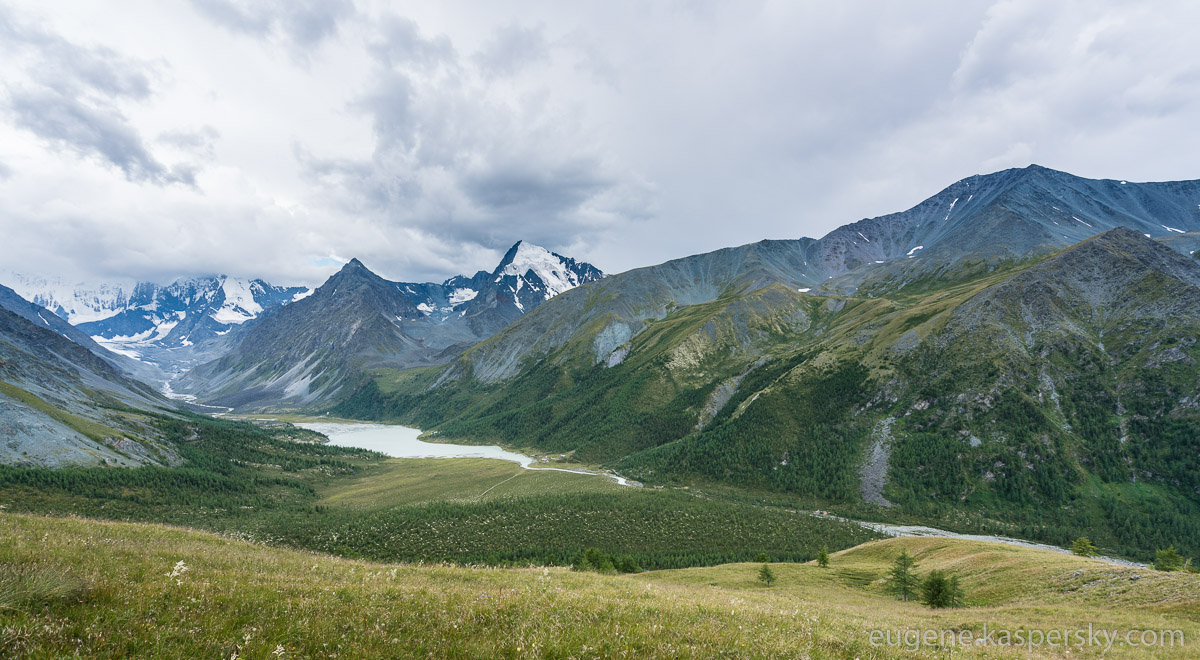 And here is the Akkem river at its source. 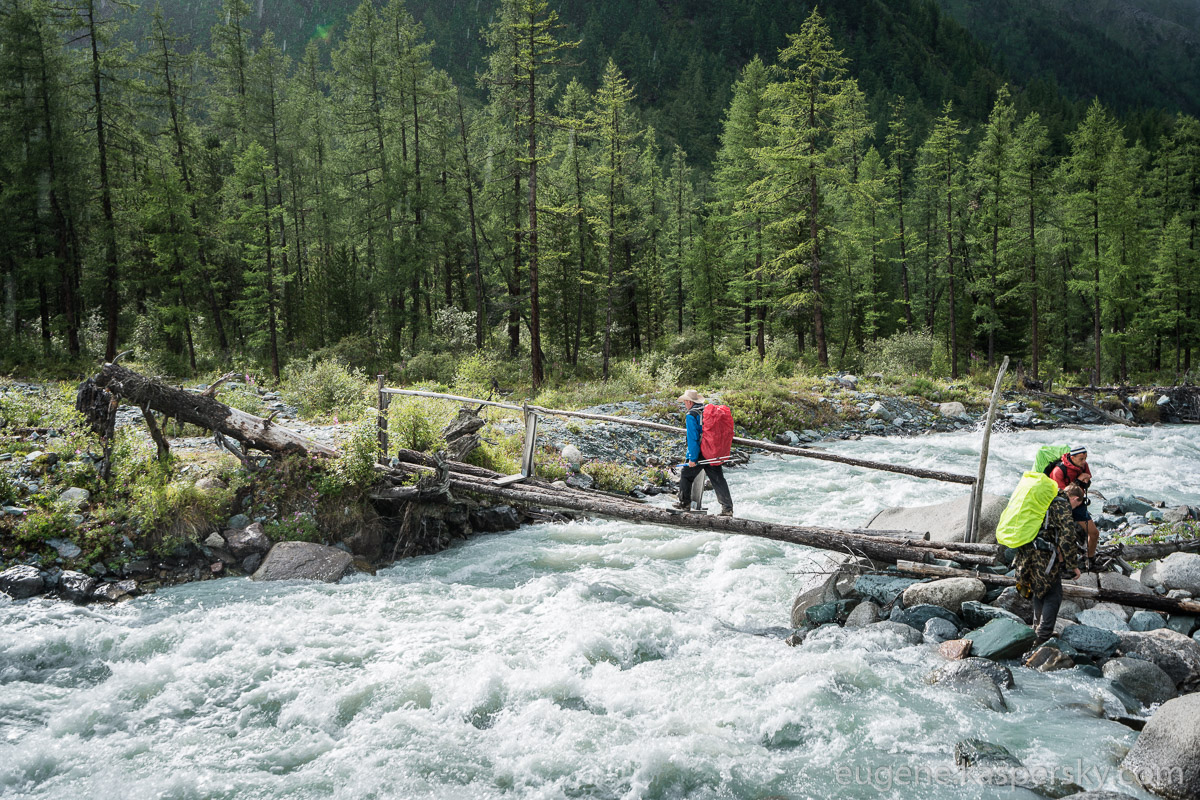 The river is said to be used for rafting, but looking at that tree lying across the river, I doubted it. 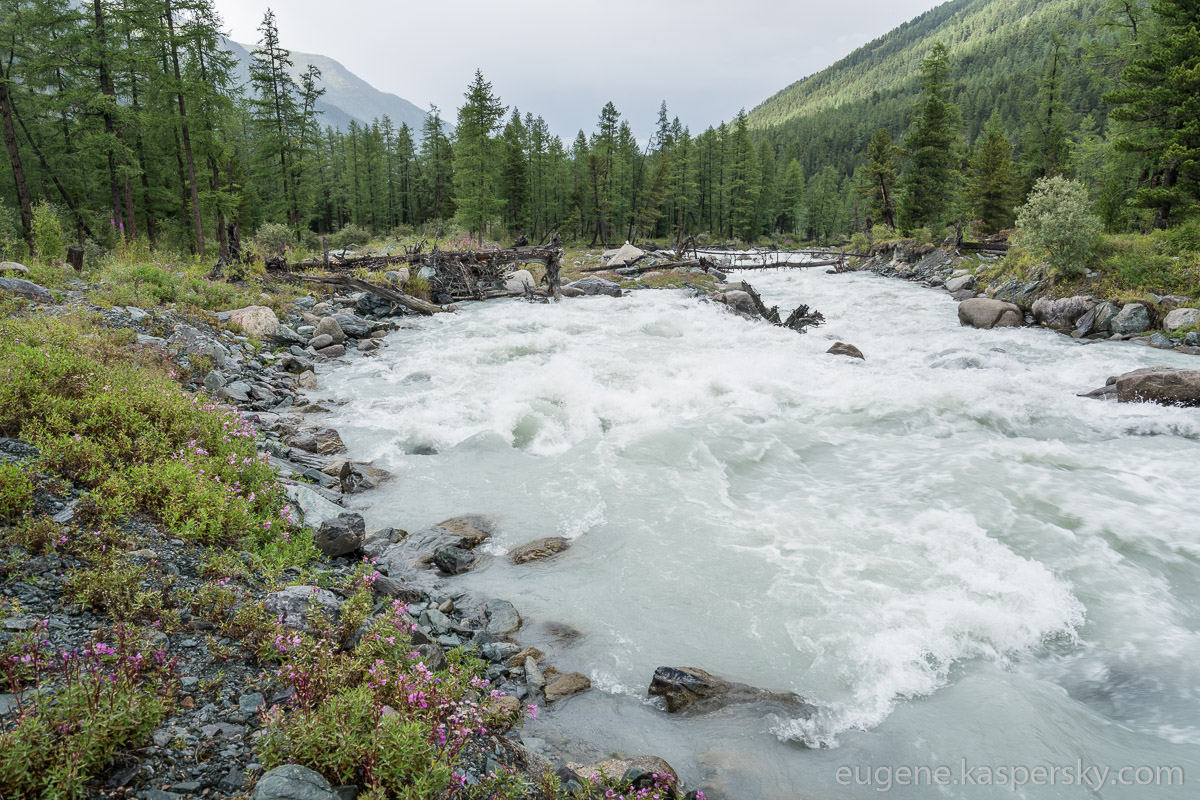 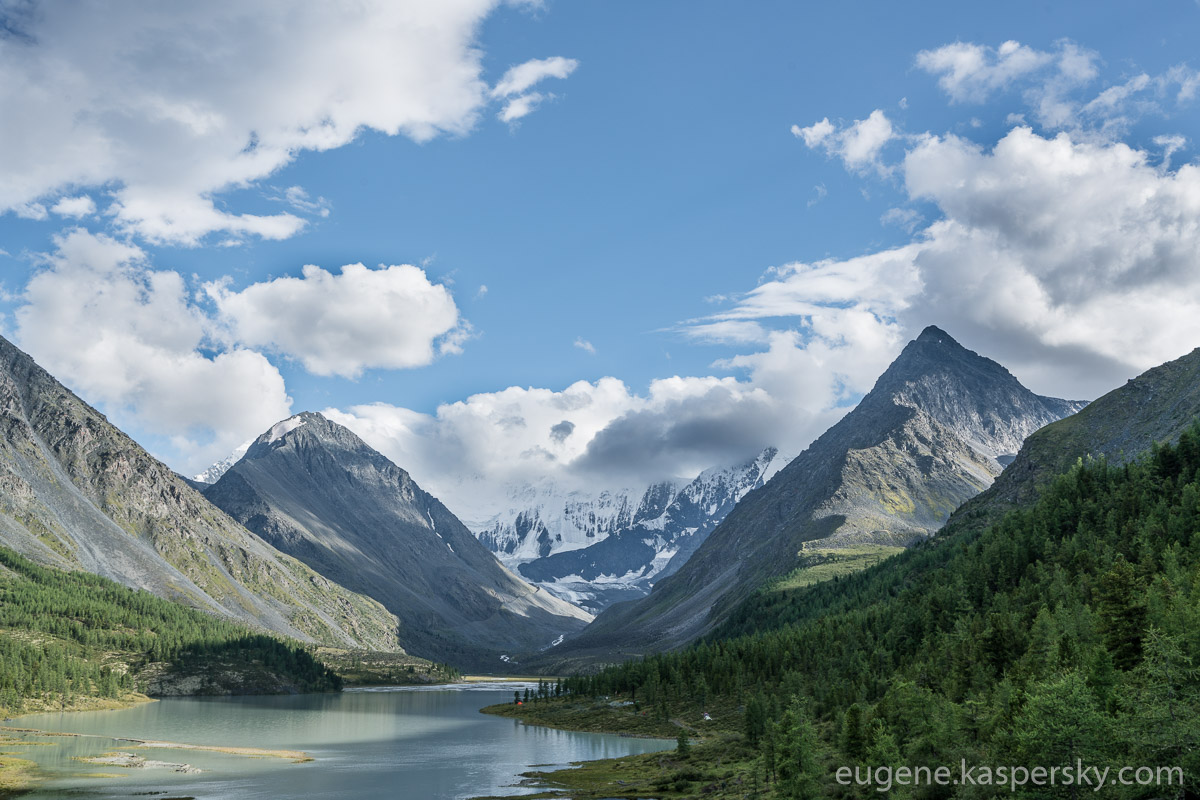 A few words about life around Lake Akkem. There are so many people here! I haven’t been there for a while, so I can’t compare. However, everyone seems to be having fun and singing songs.

The views are fantastic here, both in the morning and in the evening (in the daytime we were away hiking).

There is a bath-house (you need to book in advance) at the camp, a stream with unbelievably clear water, a grazing goat and a few cute dogs.

That’s all for this part of the trip.