The other day – finally! – I was back on the road after a six-month hiatus. It wasn’t my usual globetrotting routine, but it was a trip away – on a plane. Up to Murmansk! 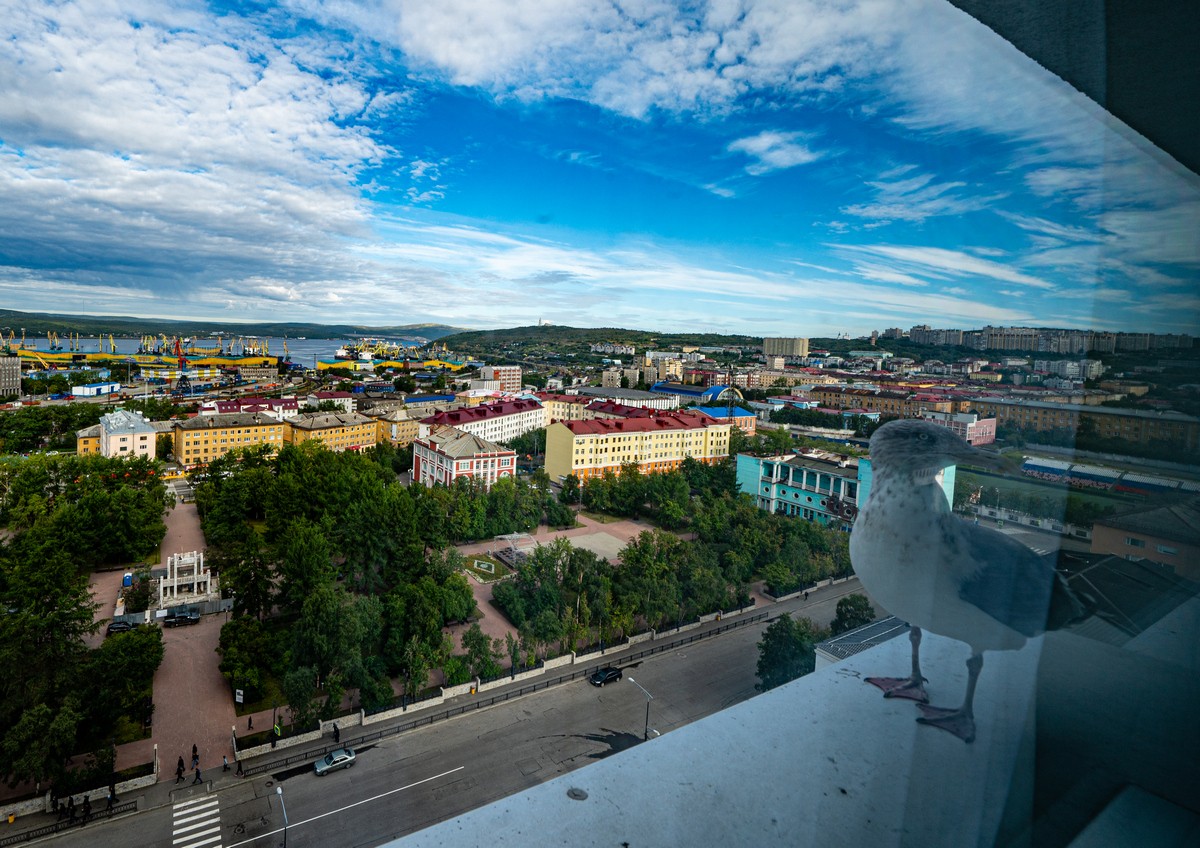 It was just a short trip (over a long weekend), whose main purpose was a spot of fishing in the Barents Sea. Actually (and just as I like it), there was another reason for the trip – a spot of business (discussing certain industrial cybersecurity projects). But enough about work already (more on the work topic in an upcoming post from Sochi); today – it’s all about the fishing!… 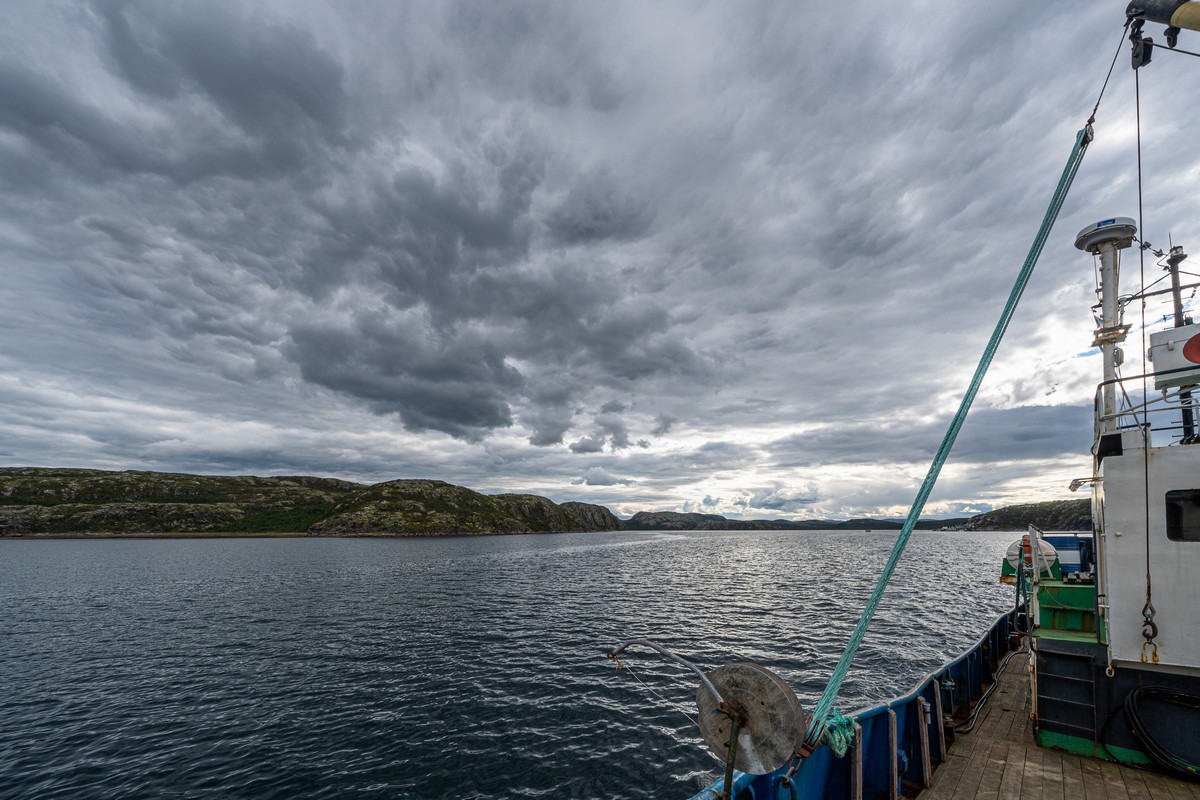 We flew (yes – it did all feel a bit alien after half a year!) into Murmansk in the dead of night, but in August in Murmansk that doesn’t mean fully dark. Still, the skies had a menacing look about them, and the views of the city were pretty gloomy. 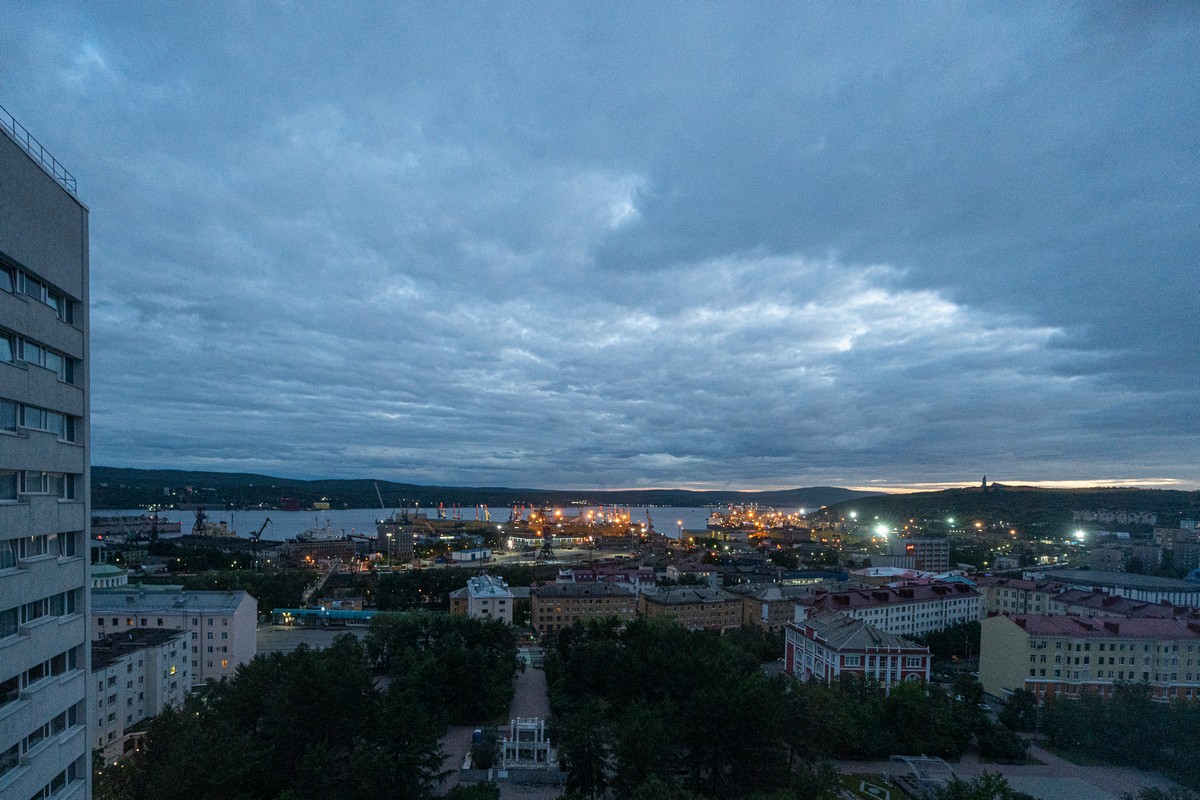 But in the morning everything was lit up brightly, adding to our optimism regarding the few days ahead. 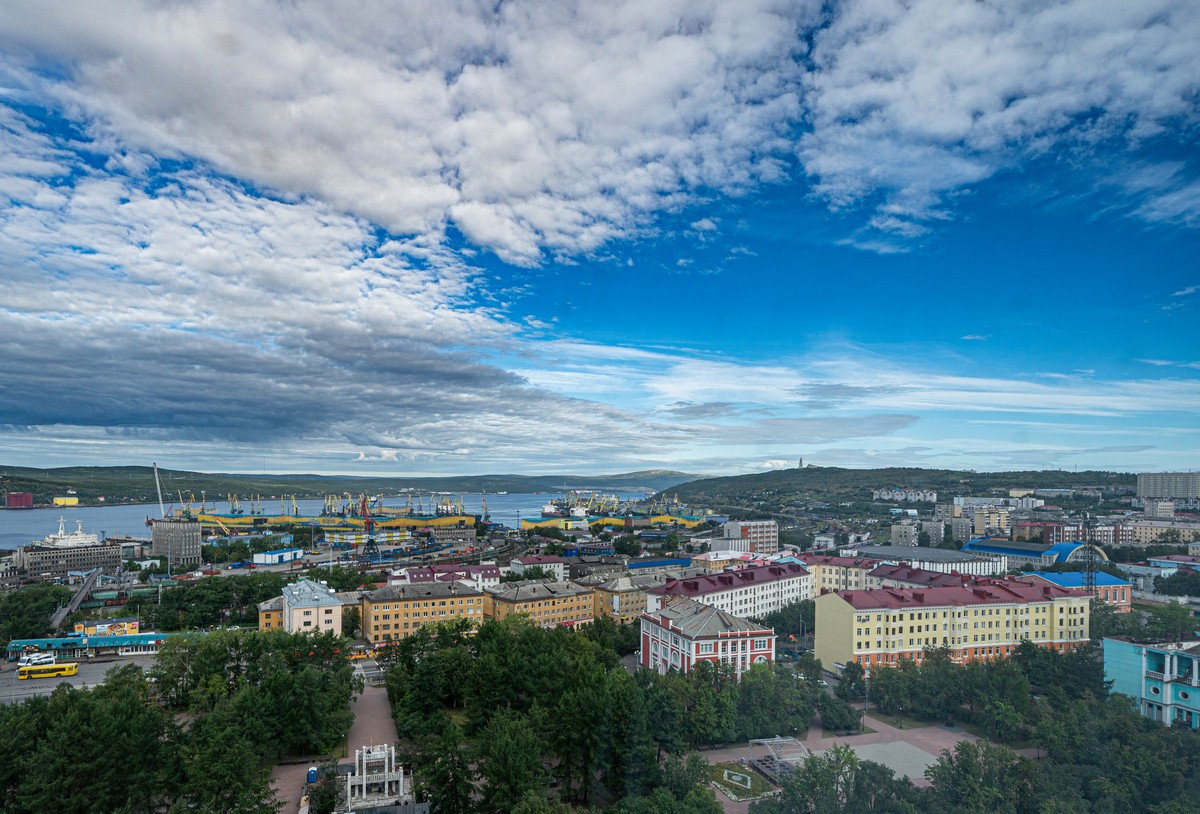 In August by day Murmansk is really quite pretty. 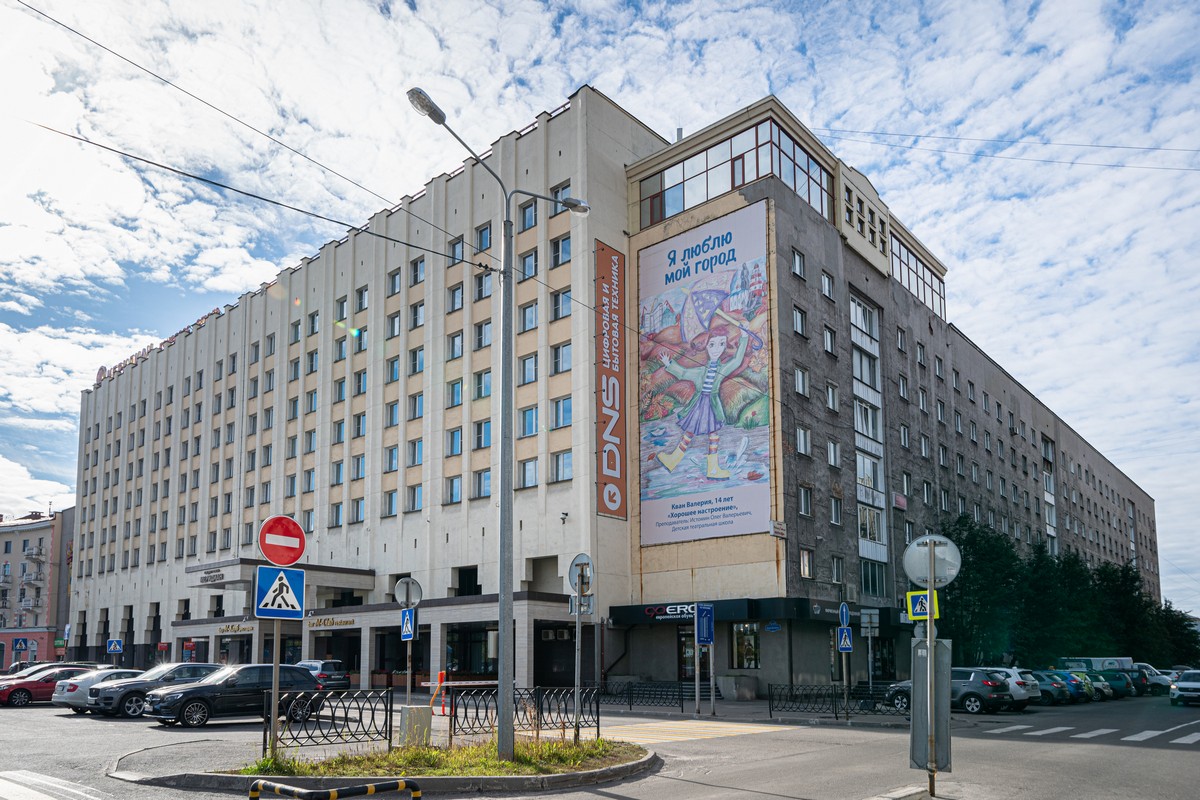 In winter here, it’s just the opposite. But of course it is – in the world’s largest (population: ~300,000) city above the Polar Circle! Not that I don’t have some experience of the climate around either of the Poles (North and South) during the light months of the year. But I have to say I’ve zero experience of polar days that remain mostly dark all day and night. Interesting – I’ll have to come back and give it a try!…

Another reason I need to return is to see the inside of the legendary Lenin icebreaker! 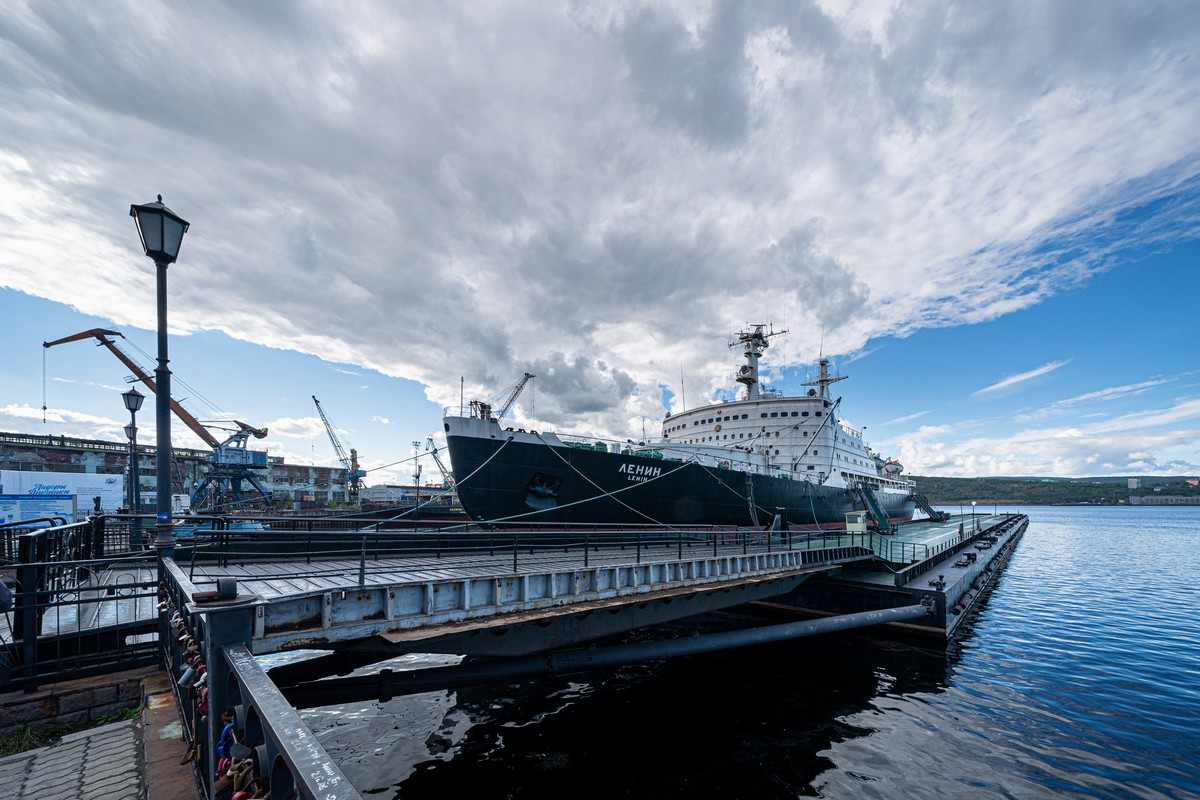 This time, alas, the crew folks who work aboard it had fallen sick with corona, poor things, so the whole ship – now a museum that doesn’t sail anywhere – was closed to tourists (. 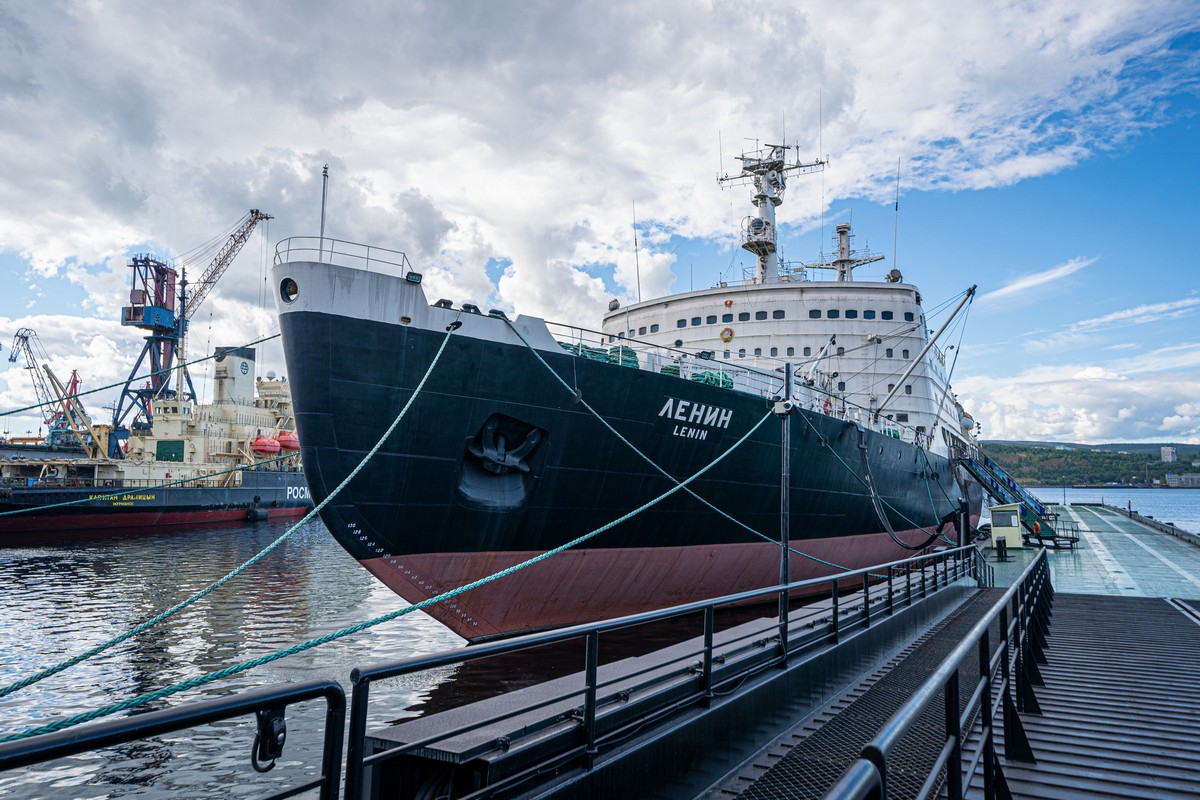 And that was that: excursion around Murmansk over! So it was onto another ship – and off out to sea for some fishing. 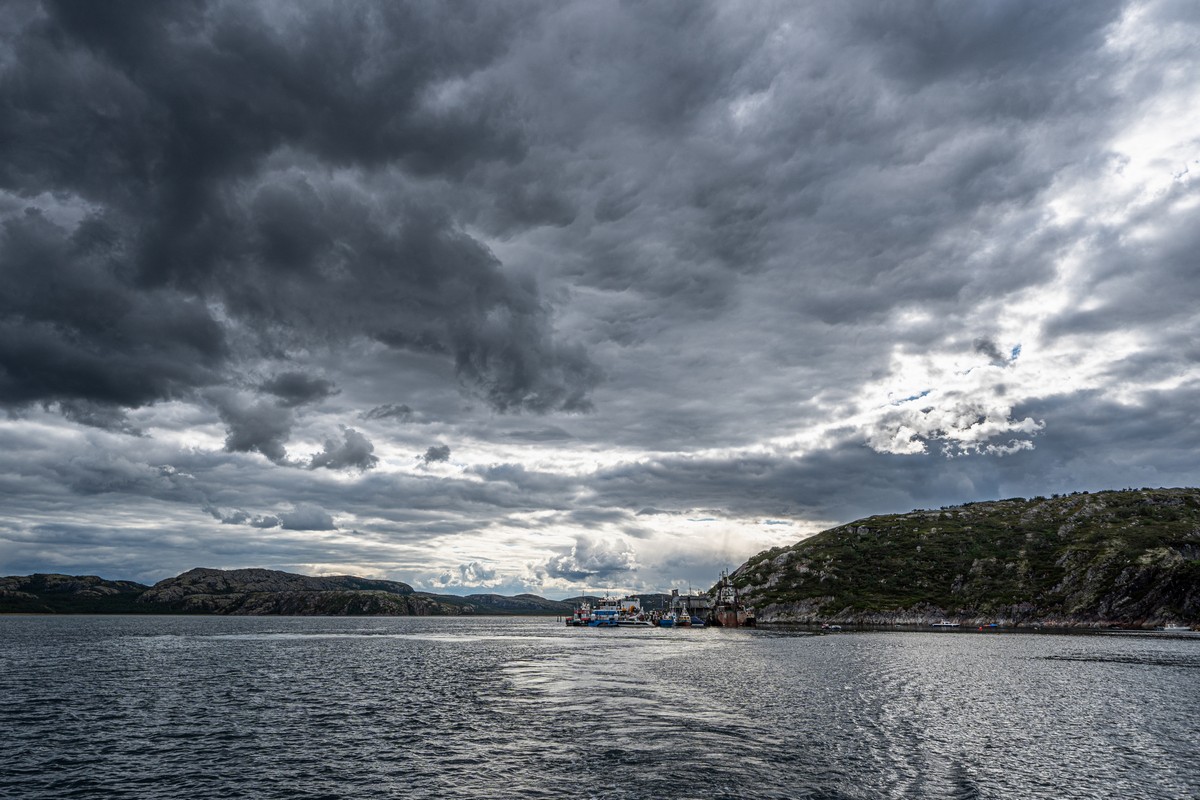 Straight away, once we were out to sea, it was the northern skies that were most striking of all – the mixture of sunlit parts, and the ominously dark multifariously-shaped parts. Words can’t describe it. Pics neither. You need to see it for real. 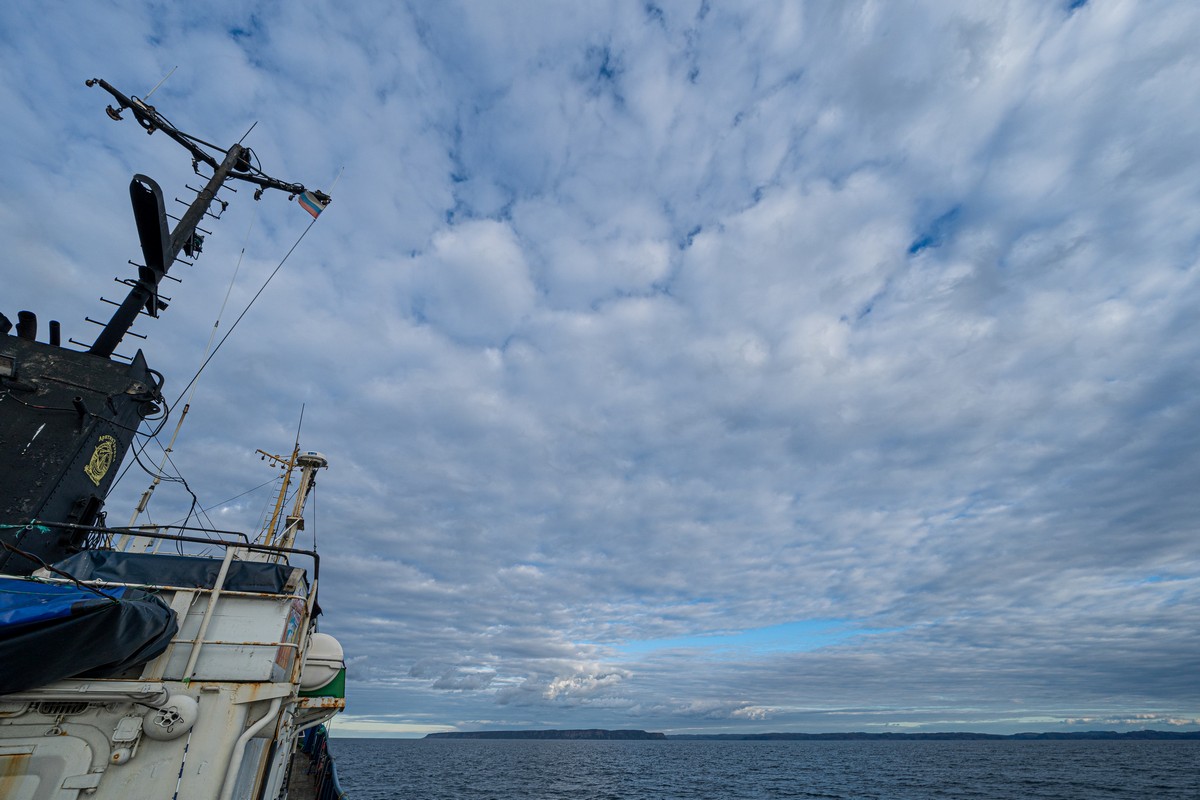 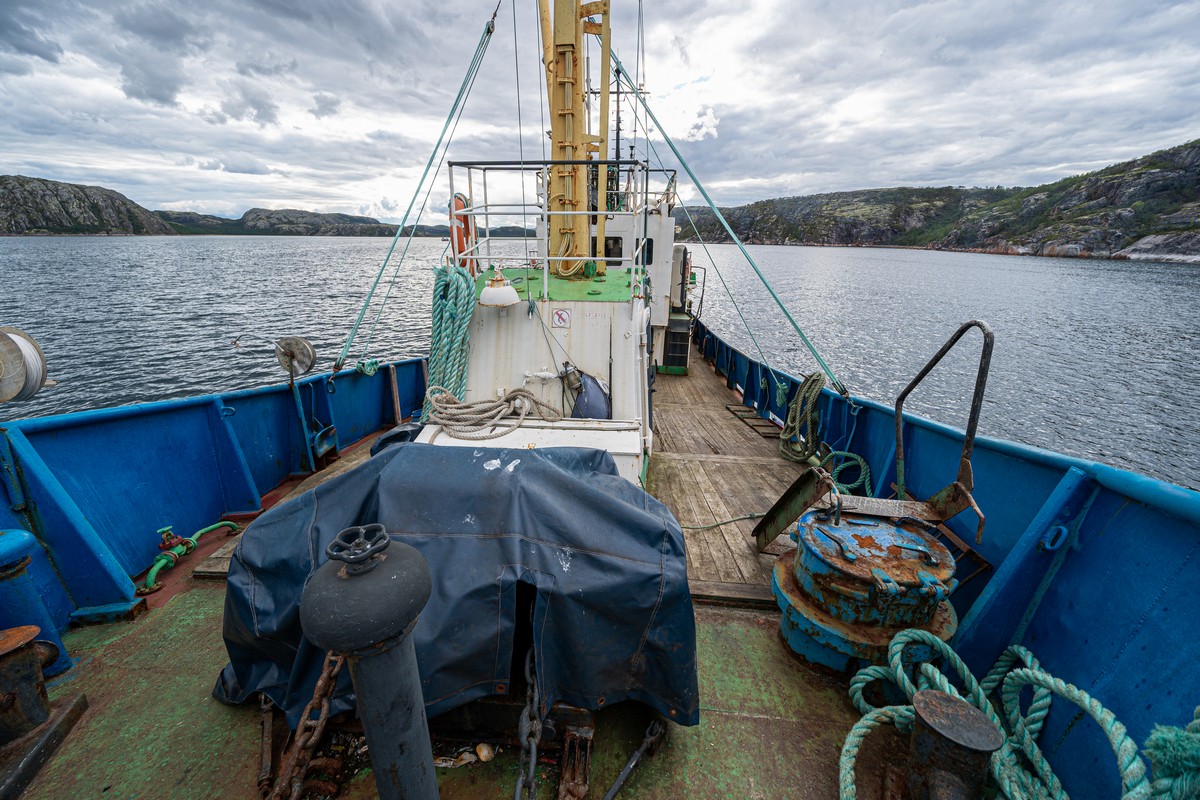 Occasionally we see other ships… 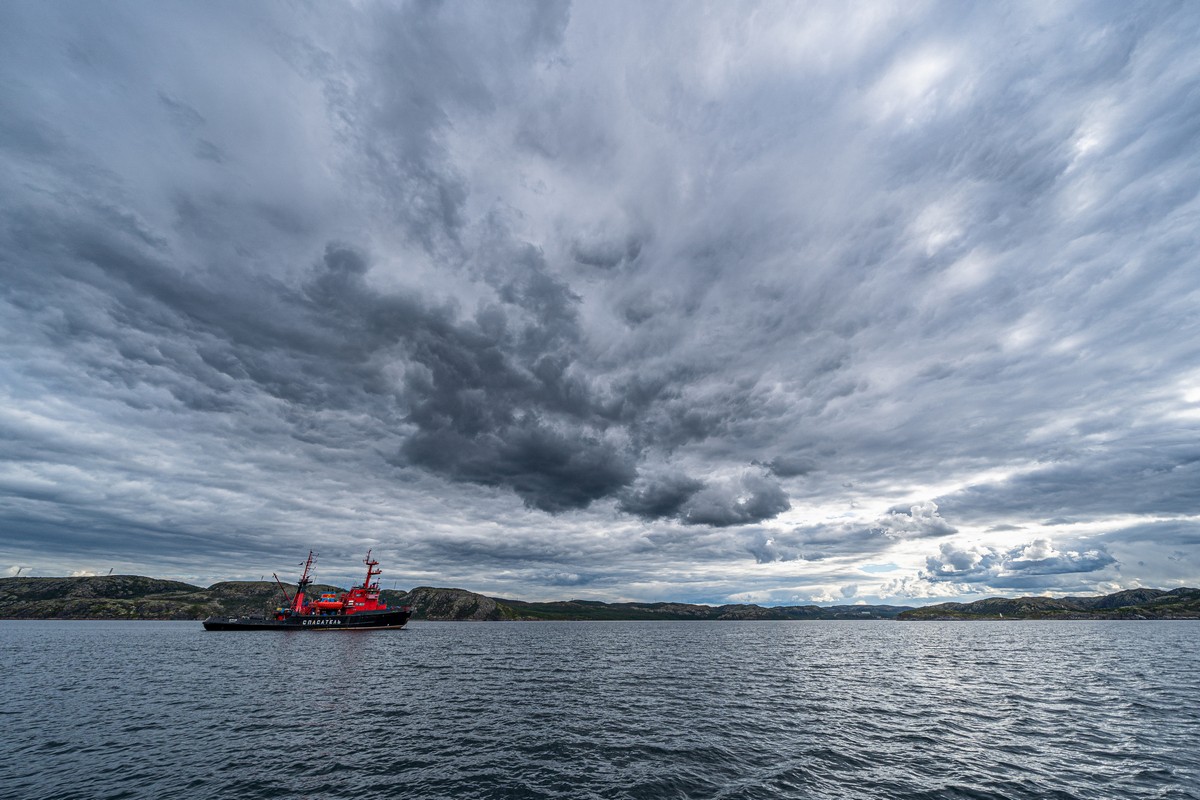 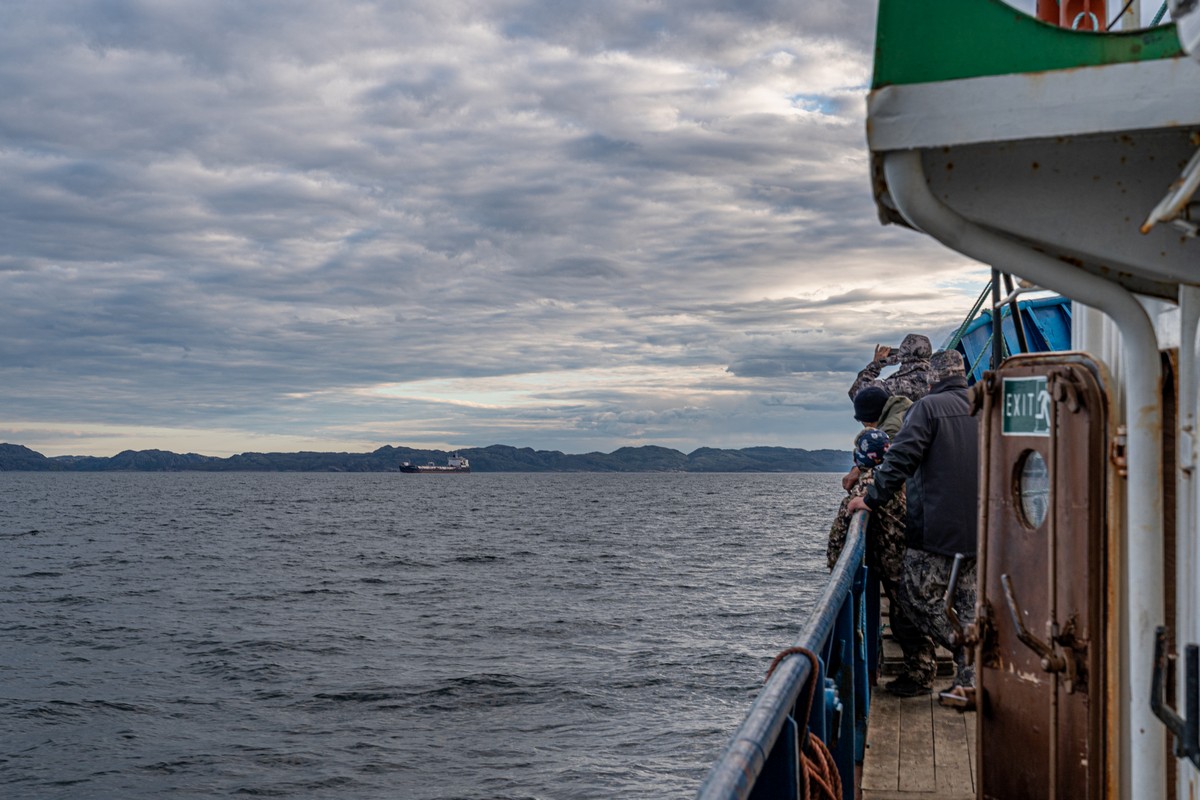 But enough meditative trances – we had some serious fishing lined up for the next two-and-a-half-days. Not that I’m much into fishing; but if someone passes me a rod and some bait, I’m game for a while…

…But, suddenly, er, that was that for the fishing too! No rods, no bait, no fish, no records broken (or not), no Brouton reminiscences… not even a beer! Our ship’s engine’s broke down! And like I say – that was that. But we were on the Barents Sea! Actually, that could have been a very serious problem – had we been far out, on open waters things could have gotten frightfully rough. Mercifully we were still in the bay area. A tug eventually came along and tugged us back to port.

All that remained was to admire the severe northern marine scenes all around, and snap them too -> 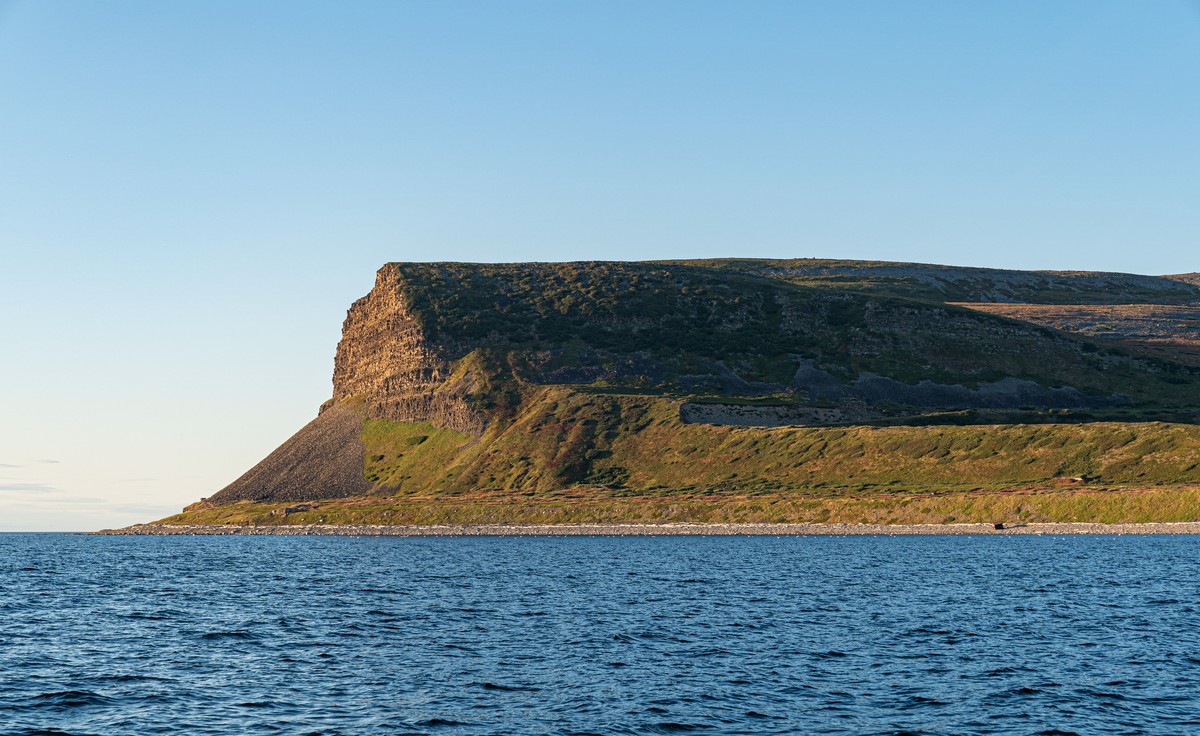 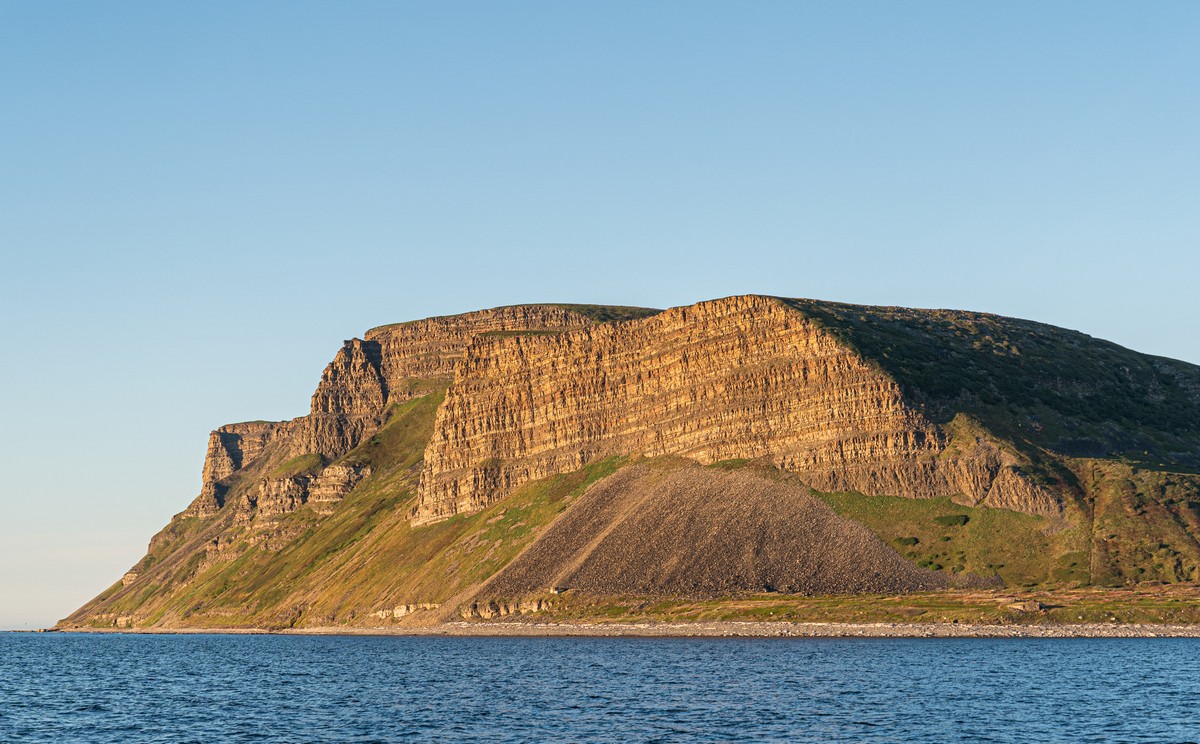 And that was that from Murmansk!

Oh well, it was at least a chance to see something besides the apartment/supermarket for once! And the weather truly was fantastic.

But I’m afraid any tales about adventures in distant, exotic places on these here blogpages won’t be forthcoming soon. It will be just the occasional short foray out to somewhere not too far away – hopefully without the technical hitches that spoiled things a touch this time ). Still, I hope to share at least some interesting adventures, stories, and copious quantities of photos soon. So stay tuned!..

All the pics from Murmansk are here.