The naval base existed from the late-70s up until 1994. In its heyday around 3000 folks lived here. Now the place is deserted, has been looted, is overgrown and rusting. Up close: ugly. A way off, on a sunny day – mysteriously charming:

What the place is known most for among naval historians/buffs, and also the people who lived there and ‘participants’, is the story of its being the site of one of the biggest explosions in the world – ever! It was made to widen and deepen Brouton Bay – since it wasn’t wide or deep enough to take naval ships and submarines. At one point an atomic explosion (!) was considered, but – mercifully – that idea was dropped in the end. Instead – they went for traditional explosives. Thus, in 1979-1980, all sorts of expired/out-of-date ammunition was brought here from all over the Soviet Union: mines (!), torpedoes (!), bombs (!), and anything else they could find – anything that makes huge bangs: anything short of nuclear weapons (!!).

All of it was shipped in, laid at the bottom of the bay. More was added, over and over, until they figured there was plenty. Then, in 1980, they set it all off! The explosion had a force of the equivalent of a MEGATON of TNT. Yes folks – a million tons of trinitrotoluene! Right here:

Here’s something I found on a forum – in Russian – for the servicemen and their families who used to live here:

‘In 1979 the explosives team arrived on the Ufa bulk freighter. In the ship’s hold were around 5000 tons of old mines and torpedo warheads. They performed three explosions to deepen the bay. The first one: 800 tons; second: 2600 tons; third: 1900 tons.’

So it turns out there was more than just the one explosion, and they began in 1979.

I wonder – was it one megaton in total, or was the biggest of all the explosions one megaton? Whichever, apparently the main explosion was the largest non-atomic explosion set off by Homo sapiens ever recorded. They say that for two days after it rained ‘dirty’ rain. And a zillion-or-so poor fishes died, their corpses floating up to the surface of the sea.

All the talk of massive explosions – man-made or not – got me thinking: what have been the most powerful explosions in the history of humankind? What have been the most powerful explosions in general? The latter question is easy: first there was the Big Bang (actually, a series of big bangs, if we are to believe the latest theories). Next down in size was the bang made when a star exploded whose debris became our Solar System with all its planets, asteroids, meteorites and assorted other atoms which make up our bodies!

But what about man-made bangs?

The biggest non-nuclear one was probably the one at Brouton Bay; not that there’s mention of it on Wikipedia. Btw: look at the quantities of TNT on that page: several kilotons at the most. Brouton: 1000 kilotons!!!

The biggest nuclear explosion ever: the Tsar Bomba.

The biggest natural explosion in human history? Probably when Mount Tambora (Indonesia) blew its top in 1815. Or maybe Tunguska – when a meteorite disintegrated five to 10 kilometers above the Earth’s surface over Siberia.

Might I have missed something? Have any of you, dear readers, anything to add?

BTW: there was the Toba super-eruption too, but that was prehistorical, occurring some 75,000 years ago.

But this is just rusting old bits of shipwrecks – probably with no connection to the explosion:

After some of us landed ashore, we didn’t go for the usual intensive trek across the island or anything like that. The weather was very poor, so visibility was low, and so besides the wrecks and abandoned buildings and military hardware carcasses, there wasn’t a great deal to see. Some of us stayed on the Athens, some dived for sea urchins, others did a spot of angling, yet others inspected the ruins, still others… got stuck in to making pelmeni! 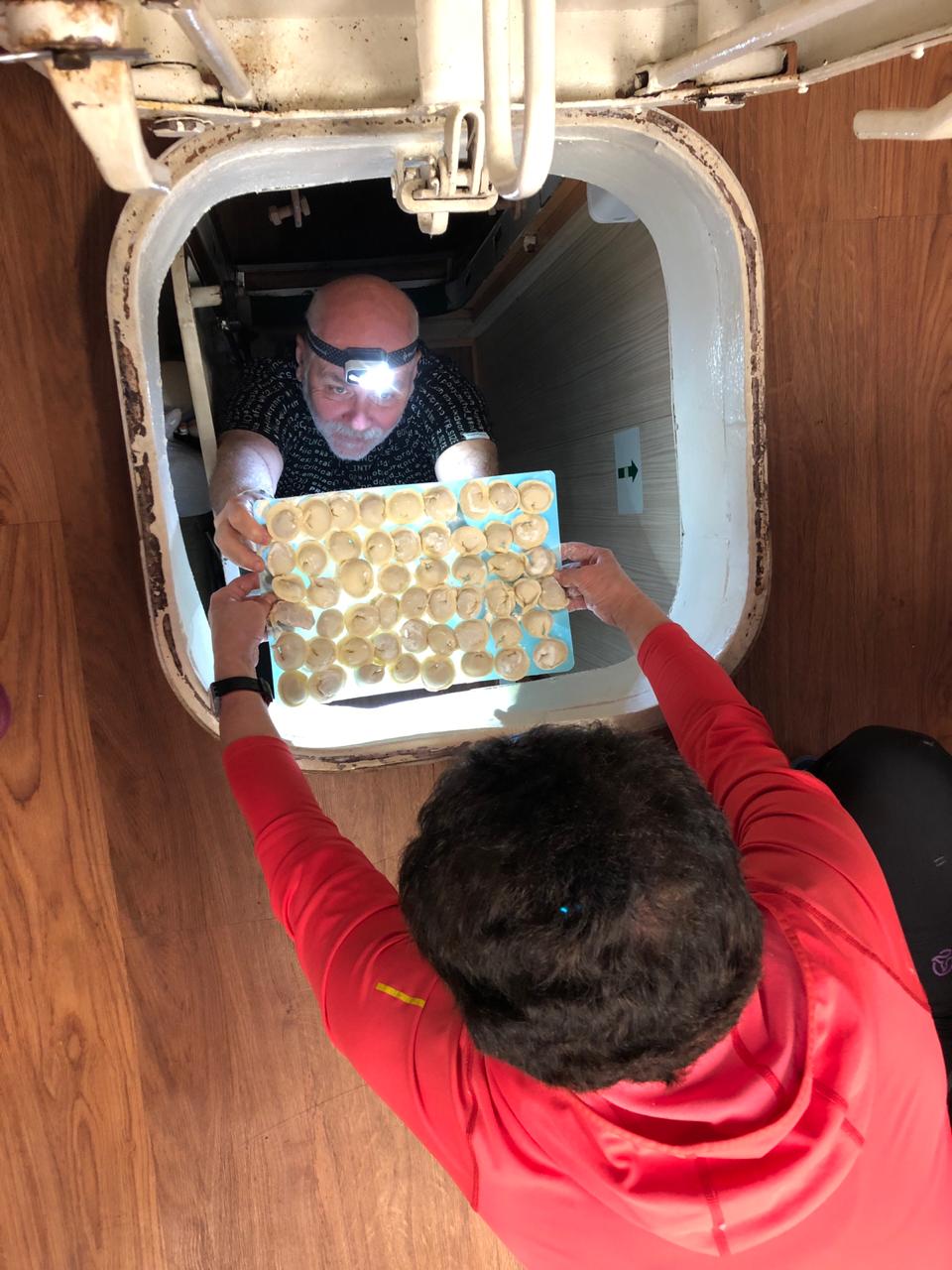 Next – the evening’s sensational scenes of Kurilian harshness ->

And look at the afternoon’s haul of cod caught! 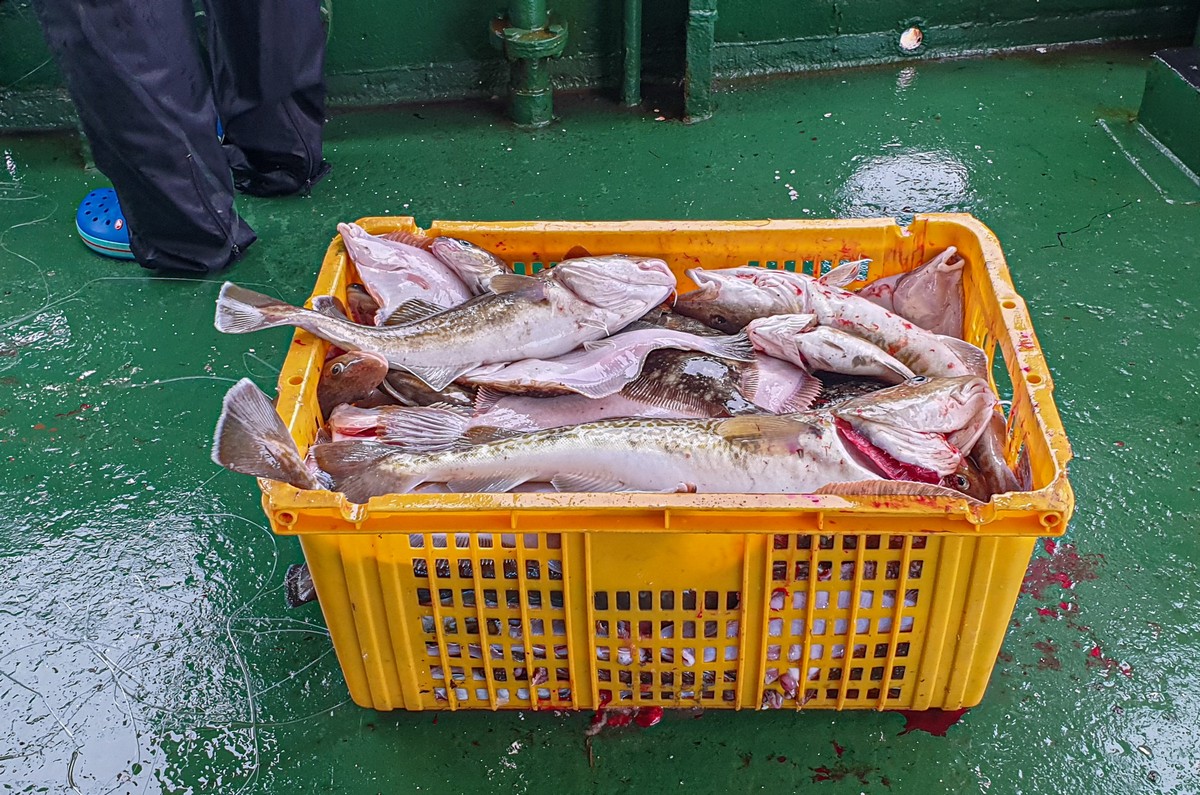 And that’s your lot from Brouton Bay folks. I hope to be back one day, also hoping that the rumors that they’re going to start using the Bay as a dumping ground for nuclear waste don’t come true :-0).

Yep, I can see how easy it has been – and still is – to make a right mess of this natural wilderness. Clearing up afterward doesn’t seem to be as easy and straightforward (or: simply no one has made any attempt whatsoever). So please – let’s not make it (a zillion times) worse by adding nuclear waste to the mix.

Next: group meeting on the Athens to discuss the day’s plans: 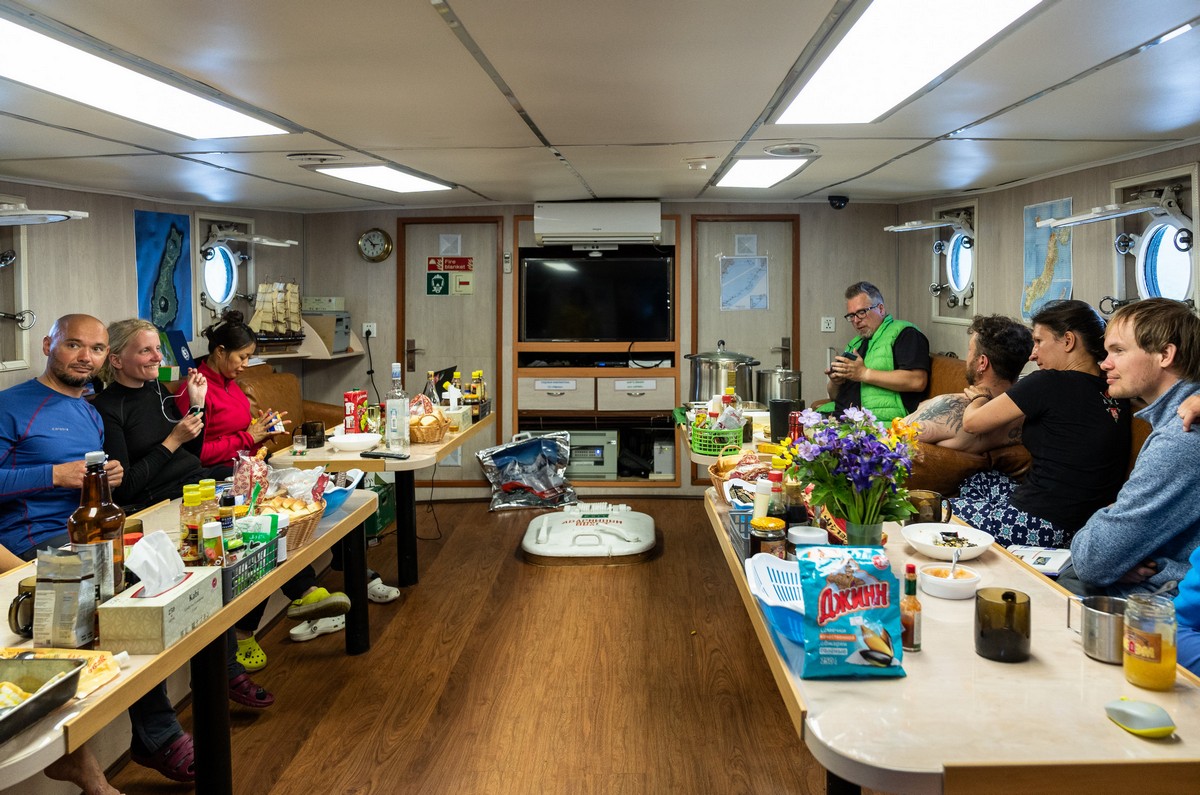 All the pics from our Kurils-2019 trip are here.