Starmus is a quantumly stellar conference! I can’t remember a conference where I went to every presentation, from beginning to end, but I did here (well, almost). Thoroughly interesting, lively, engaging, stimulating. In short: out of this world – just like most topics spoken about.

All righty. Here’s my quick synopsis of all the speeches of day two:

The American-Australian astrophysicist. Nobel Prize in Physics in 2011. Thought-provoking presentation about dark matter, of which, he reckons, a large proportion of the Universe is made up, but which we can see with neither the naked, trained, nor micro-/telescope-assisted eye. Also told us about dark energy (sounds like a sub-genre of techno:), which, though also completely unknown and unseen, is “hypothesized to permeate all of space”! (- Wiki). 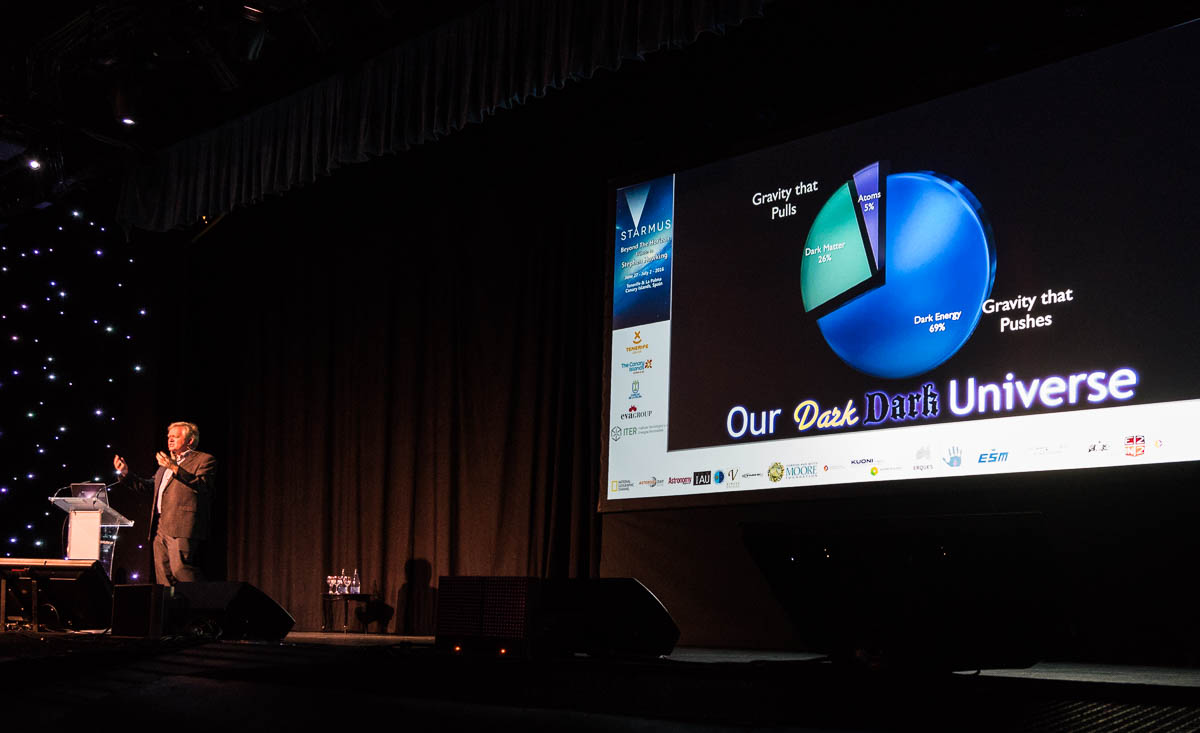 The British (at last a non-North-American!) physicist, mathematician and philosopher of science. His presentation was real old school: he used an ancient overhead projector with transparencies!! Very quaint! Great content too, added to by hand with a felt-tip marker…

He hypothesized about what happened at the moment of the Big Bang, and what was going on before it. Can we raise the curtain on these mysteries based on certain signs and waves left in the Universe? Was there any matter in existence before the Big Bang? If so, what kind? A most thought-provoking theory. So fascinating I lodged the topic in my subcortex to be returned to and mulled over some more later. 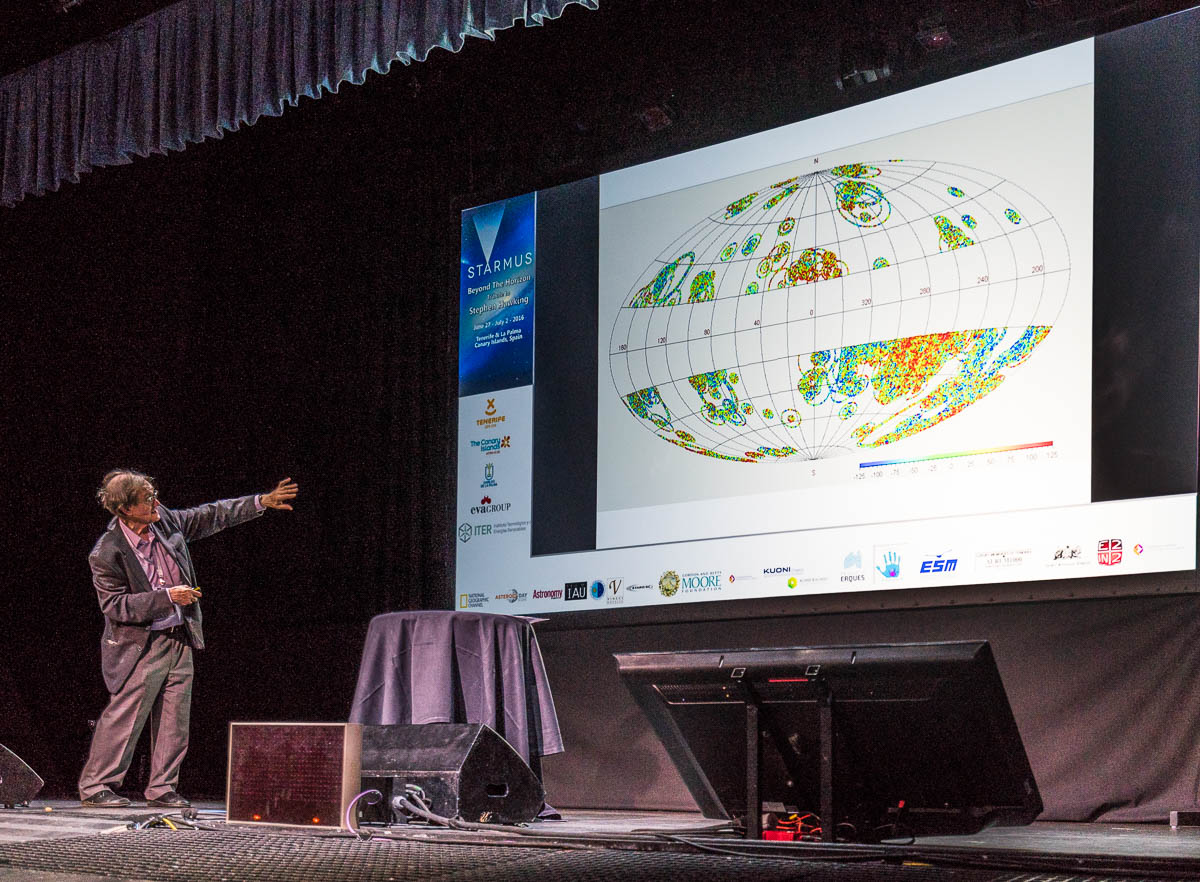 The American astrophysicist. An exemplary speaker chatterbox and joker. Told us about what scientists think about potential encounters of the third kind. Of course, traveling to the stars – which would necessitate speeds like those of the Millennium Falcon‘s hyperdrive, is a long distant dream. However, it’s thought about a lot, and not just by science fiction writers but scientists too. Scientists reckon that other forms of life far away will either not notice or not take any notice of us – much like we don’t notice or don’t take notice of, say, worms – or they’ll find us cute like we find kittens cute. What they won’t do, he informed us, is wrong us in any way. “Is this guy an extraterrestrial agent?” I wondered. “He comes here to calm our fears of alien invasions, our guard gets lowered, and boom – here come the Martians?!” 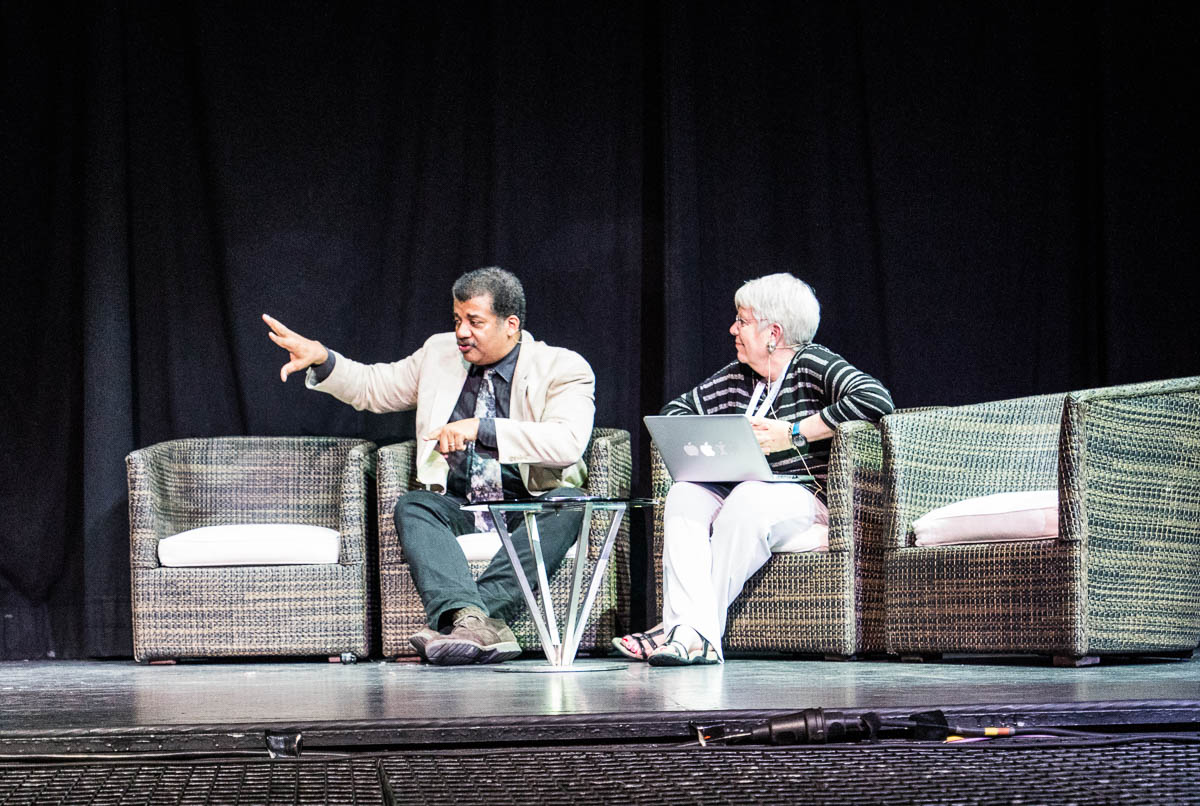 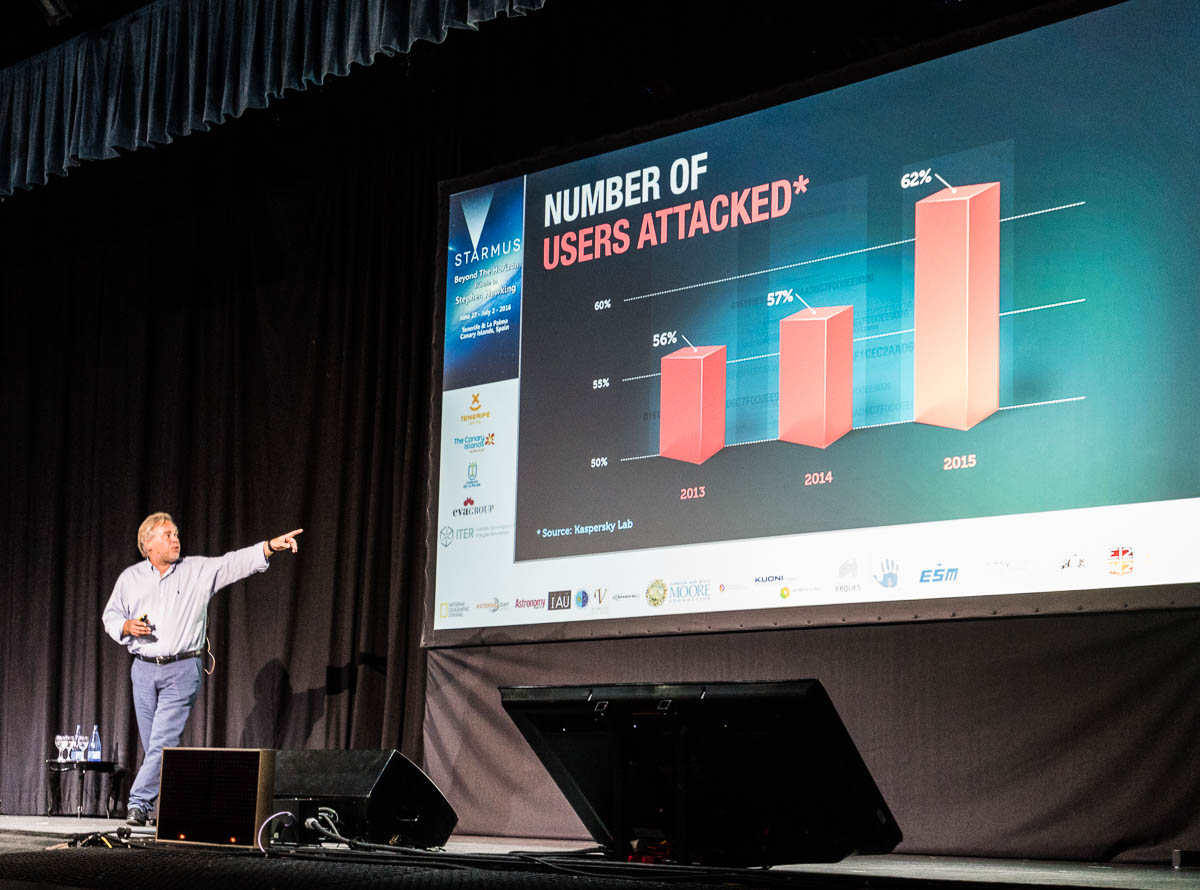 I wasn’t here just to see to the presentations as one of the audience (though that would have been fine); I had a presentation of my own to give – on what I call the ‘Dark Ages of Cybersecurity’. It’s basically about how we need to save cybersecurity from itself by thinking differently. I was told it went down very well and widely enjoyed. Phew; no pressure :).

The Norwegian psychologist and neuro-scientist. Nobel Prize in Physiology or Medicine, 2014. His presentation was all about the brain and how brain-bogglingly advanced it is.

Turns out rats have a really advanced brain! They managed to insert very thin sensors into their brains that were able to measure changes at the neuron level! Then they had them do the usual running about their cages, etc., and recorded the results.

The first neuron (or area of neurons) to be recorded gave out impulses only if the rats were in a specific place. Then they made up a map of these places and what they got was a kind of grid. 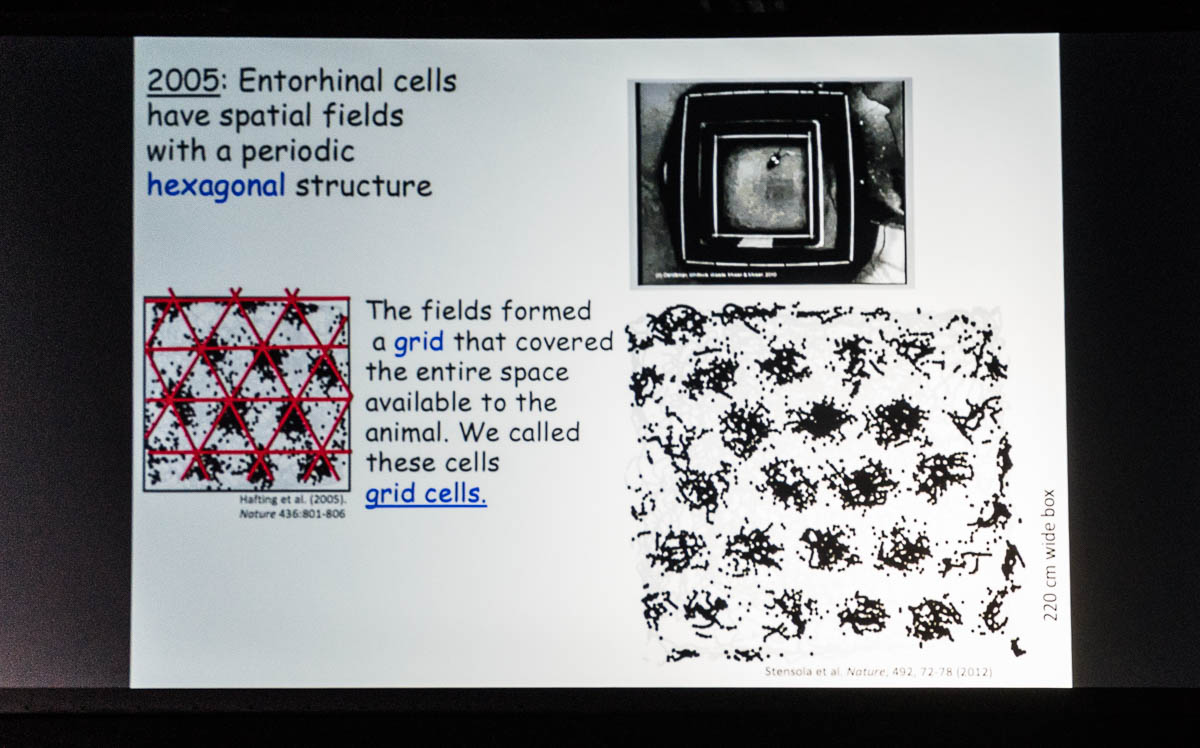 In other words, a rat’s brain was able to determine the location of the particular rat. And when they prodded further, they found other zones of the brain, which also reacted to location, but on a different scale. 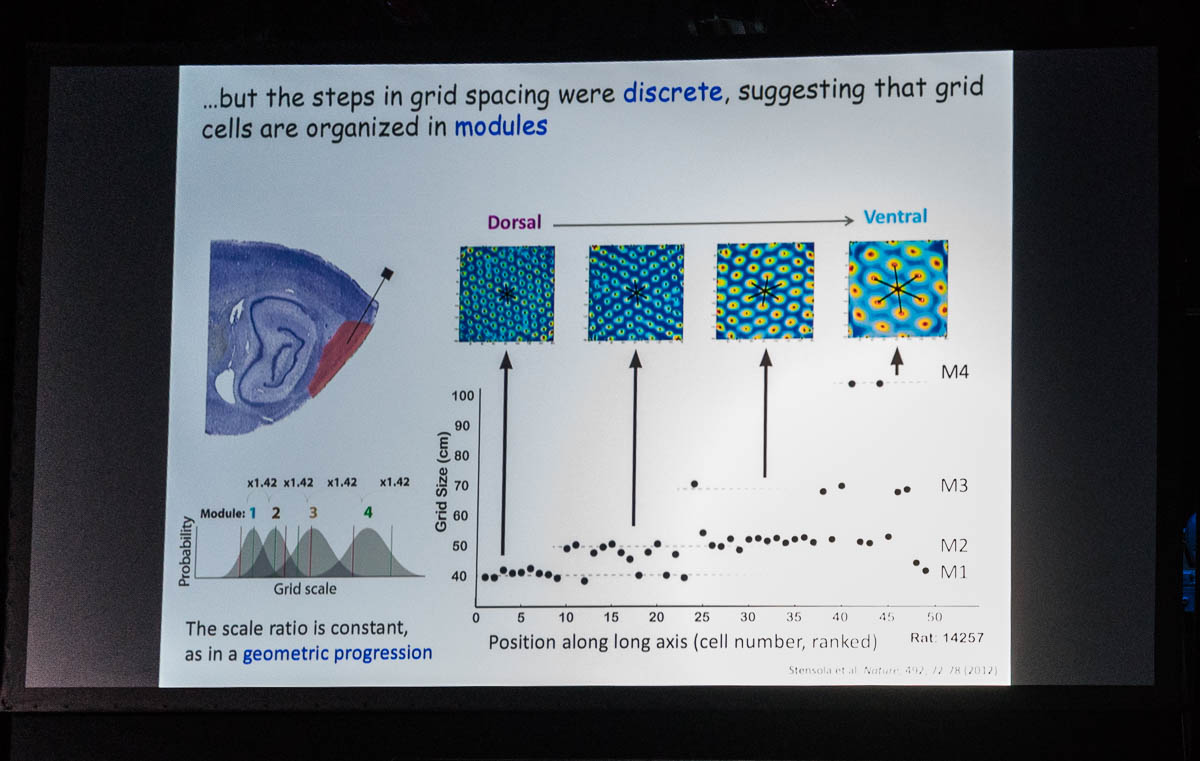 They prodded again and again (see the pic), and even the figure 1.42 was deduced, which is the measurement scale of distance for the rat’s brain.

Then they managed to analyze areas of the neural network of rat thoughts, and were able to determine the direction of movement, speed of movement, and contact with already familiar objects (walls). 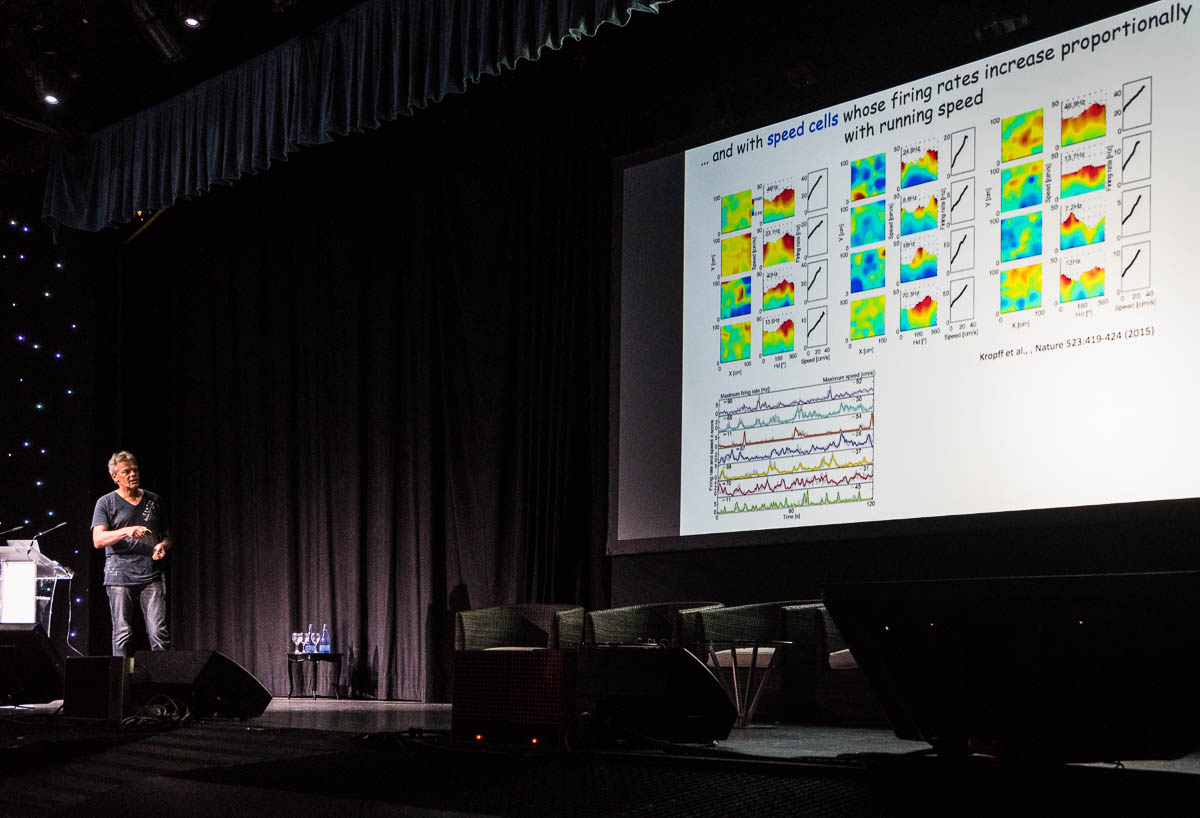 In other words, rats have a GPS built into their brains! If a rat goes down a road once, next time it’ll recognize it. Experimentally confirmed! Oh my goodly rodents.

And it’s not just rats that have GPS wired into their brains; similar instrumentation has been found in the brains of bats, monkeys, and even – Lord Darwin forgive me – humans! 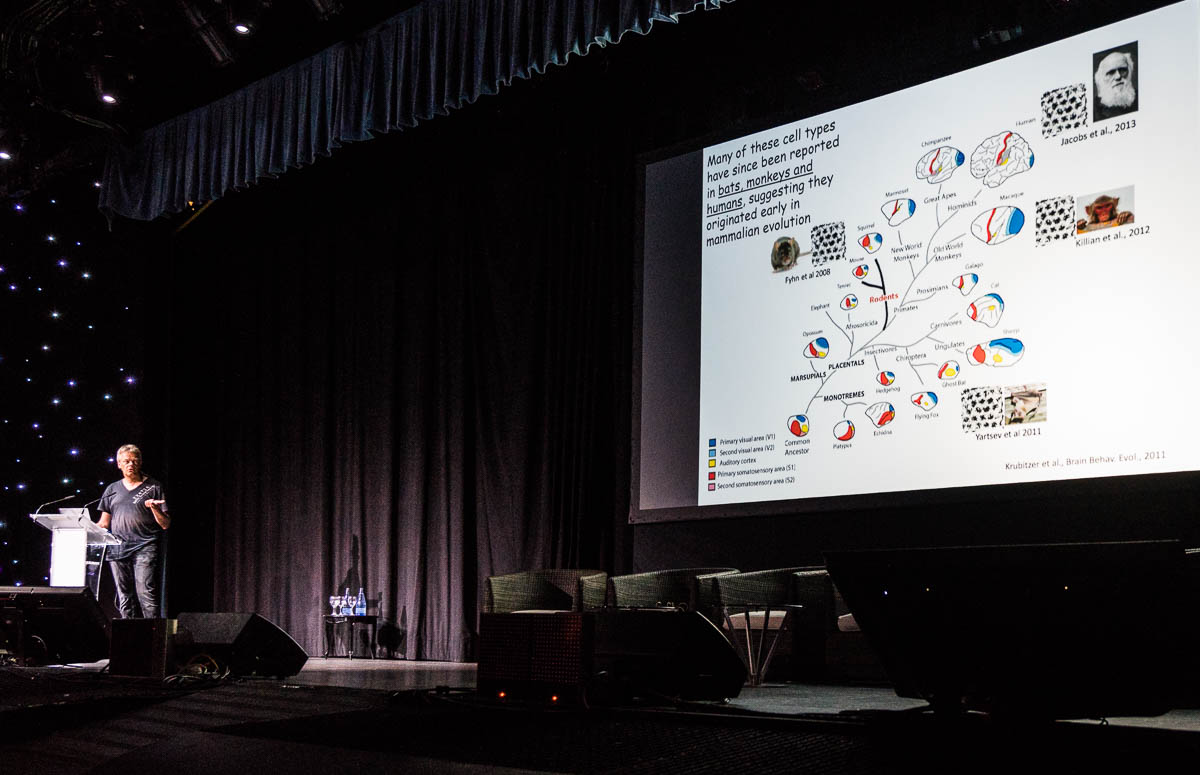 Incidentally, there were some typically-1950s experiments on humans in this respect. Read about one in the photo: 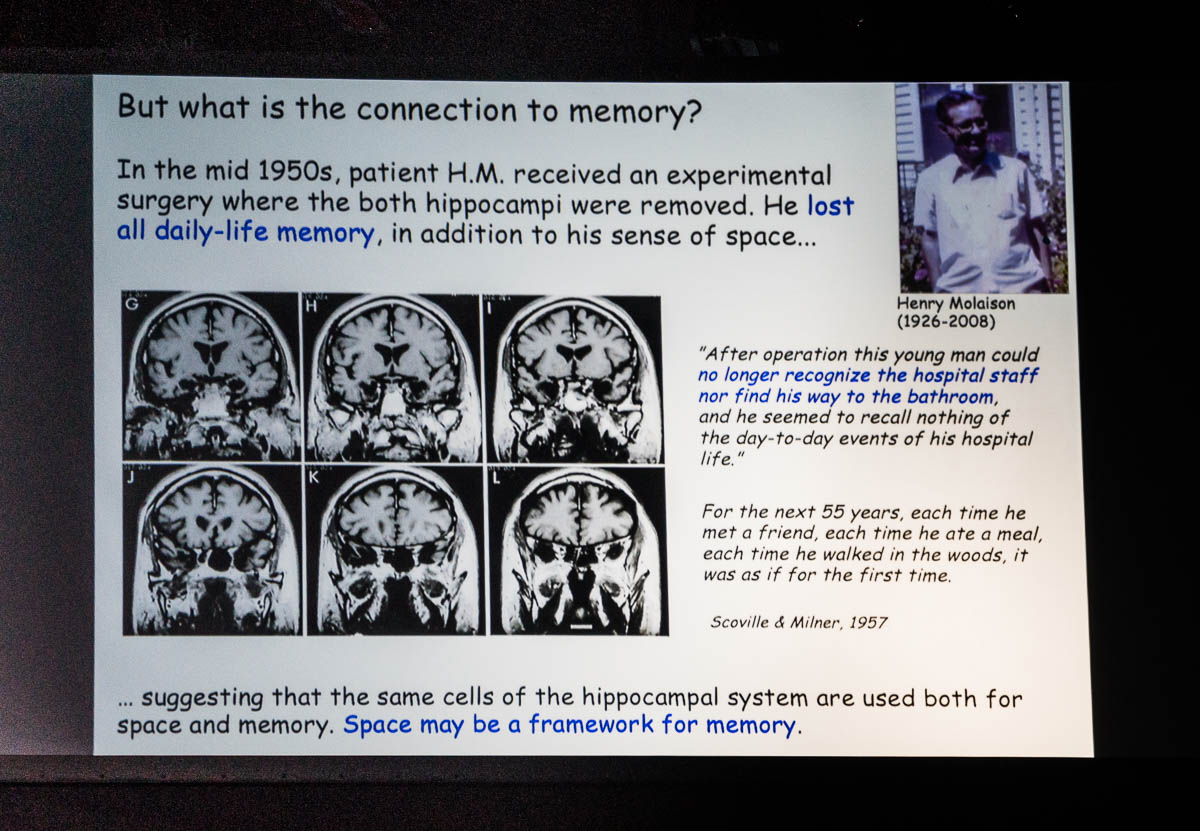 Later there was other, more precise research. In short, our brains are cells of memory connected to thousands of other cells. In 2-D it works out like this: 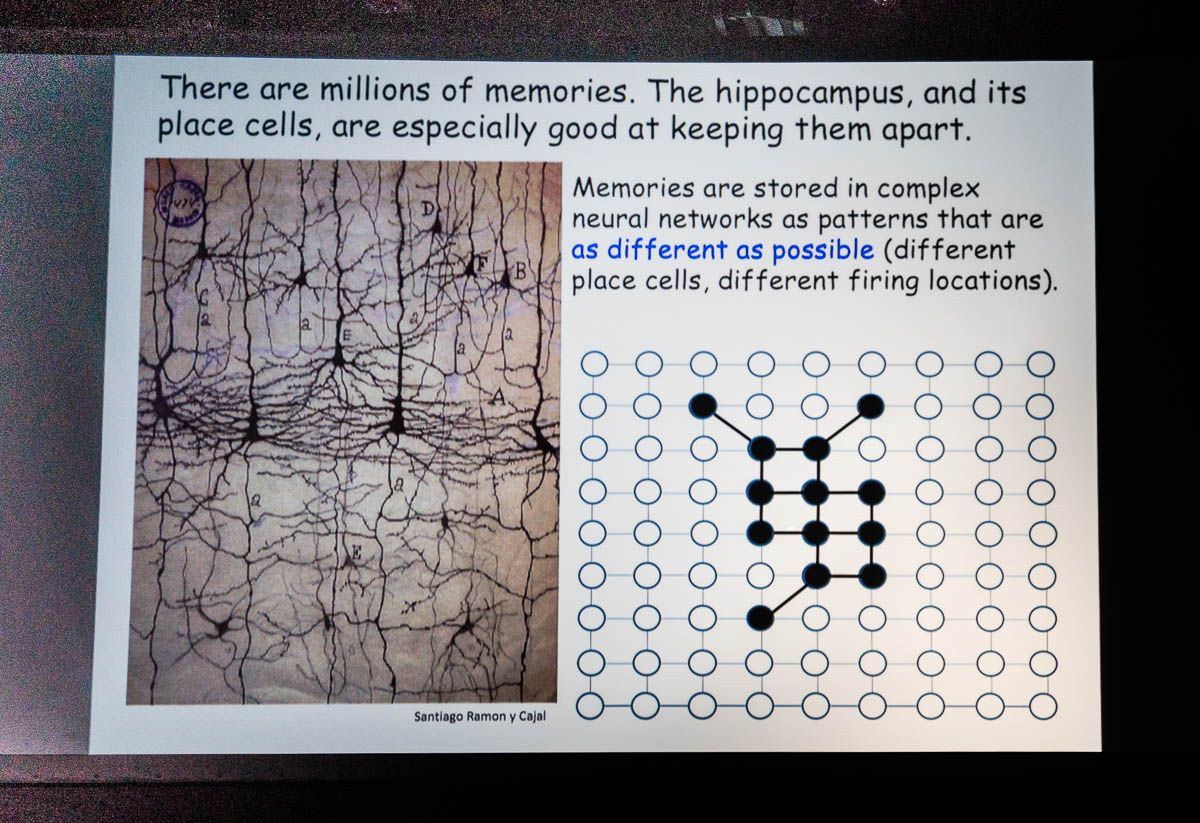 Want more detail? Then go learn about science! It’ll help your chronic dissatisfaction with life and fanatical prodding of marginality and other silly absolutes (if that’s what you suffer from). Too late? (though I say it’s never too late.) Then at least have your kids or grandkids learn science!

The American planetary scientist, and leader of the imaging science team on the Cassini mission currently in orbit around Saturn.

Her photos are… [long pause, no words]. Have a look for yourself.

The rings of Saturn are huge mega-kilometer-wide planes, smooth and sparkling. And along the edges stand two-to-three-kilometer pressure ridges (quite why no one knows). Practically everything has already been snapped from there – even the small astro-object that goes by the name of Earth. Those pics weren’t the clearest, but what is clear it is our planet.

Next up: panel discussion with the astronauts Alexei Leonov, Rusty Schweickart, Claude Nicollier, Sergey Volkov, Garrett Reisman, Roman Romanenko. Moderator: Chris Hadfield (Google them all; all outstanding achfievers). Much interesting stuff said about past missions, but alas not much regarding the future.

And that was how day two was brought to a close. But not evening two! Everyone was loaded into coaches and off we were ferried to a psychedelic party at ITER – the Institute of Renewable Energy.

Back tomorrow folks, with the third and final installment from Starmus…

All the Tenerife photos are here.