Onward we marched, along Three Capes Track. The time had come to visit Cape Pillar, from which mind-blowing views like this are to be enjoyed: 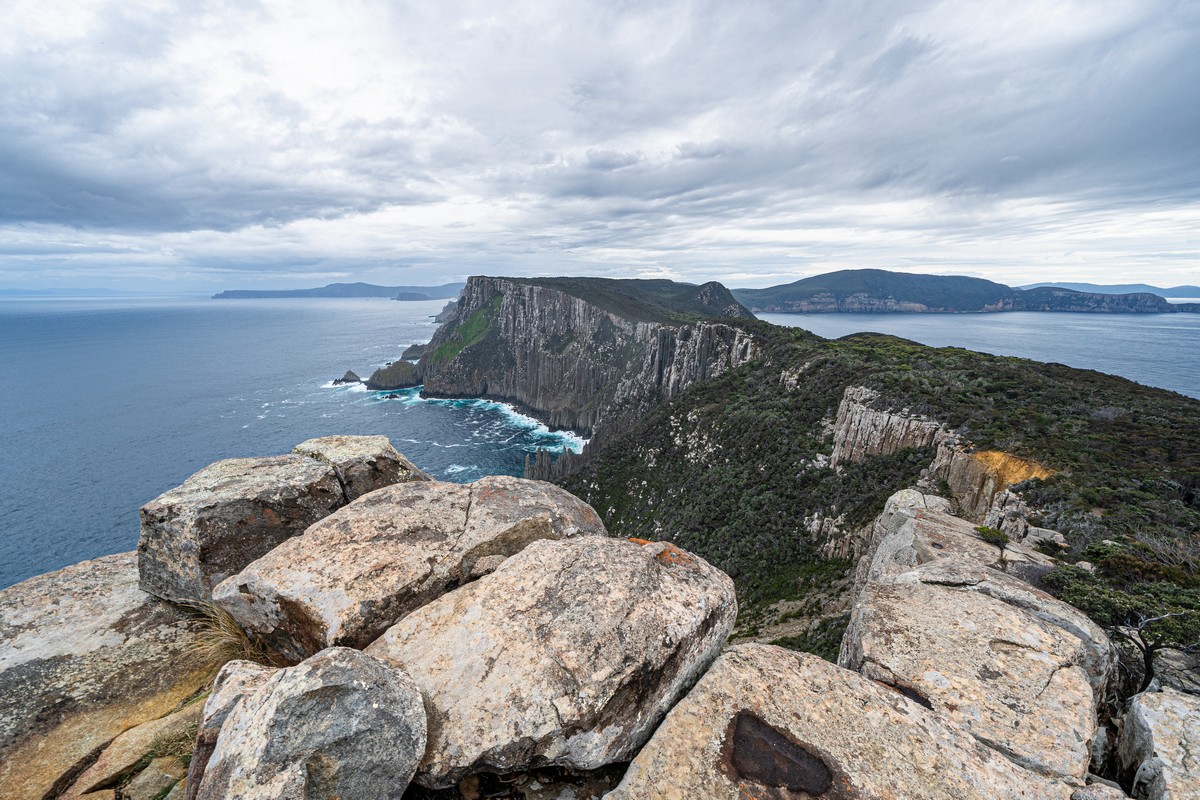 Around half of the seven kilometers to get there are walked along this elevated wooden path:

It’s even called ‘the snake’. Here’s its head! 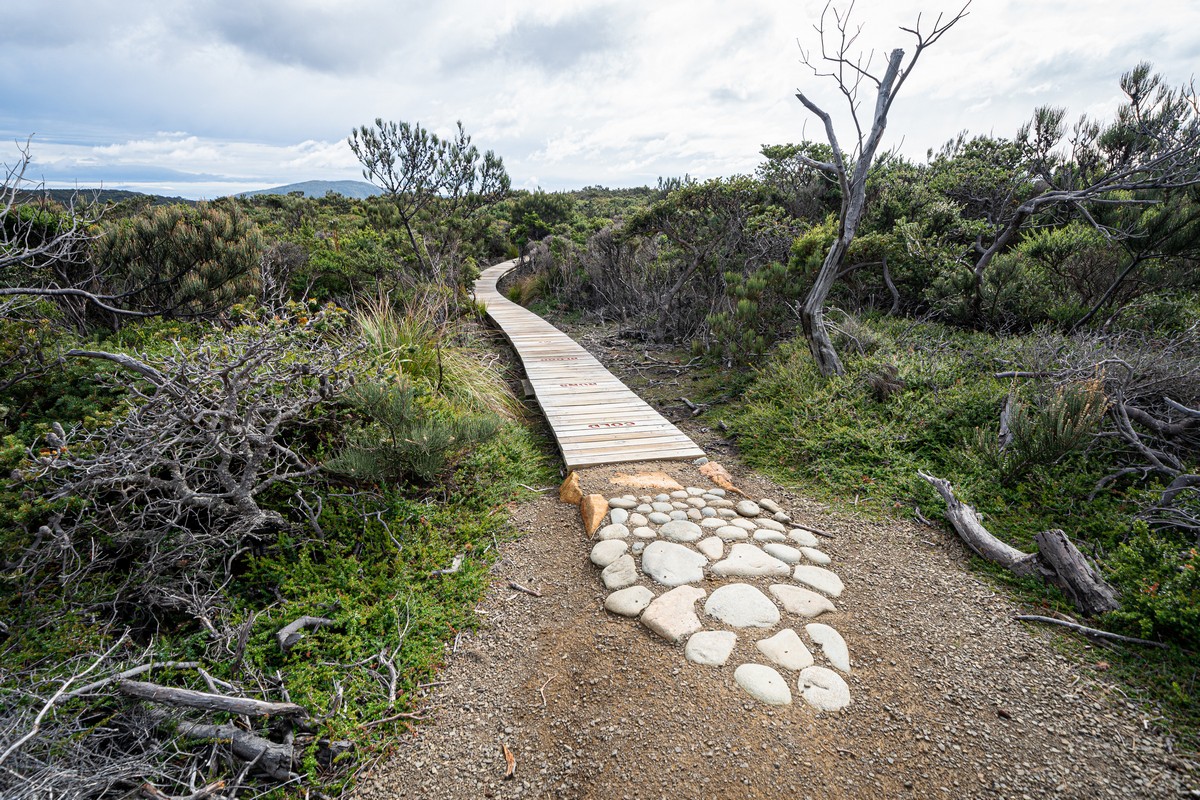 From the head onward it was a gravelly path. I wonder why they elevated just half its length?… 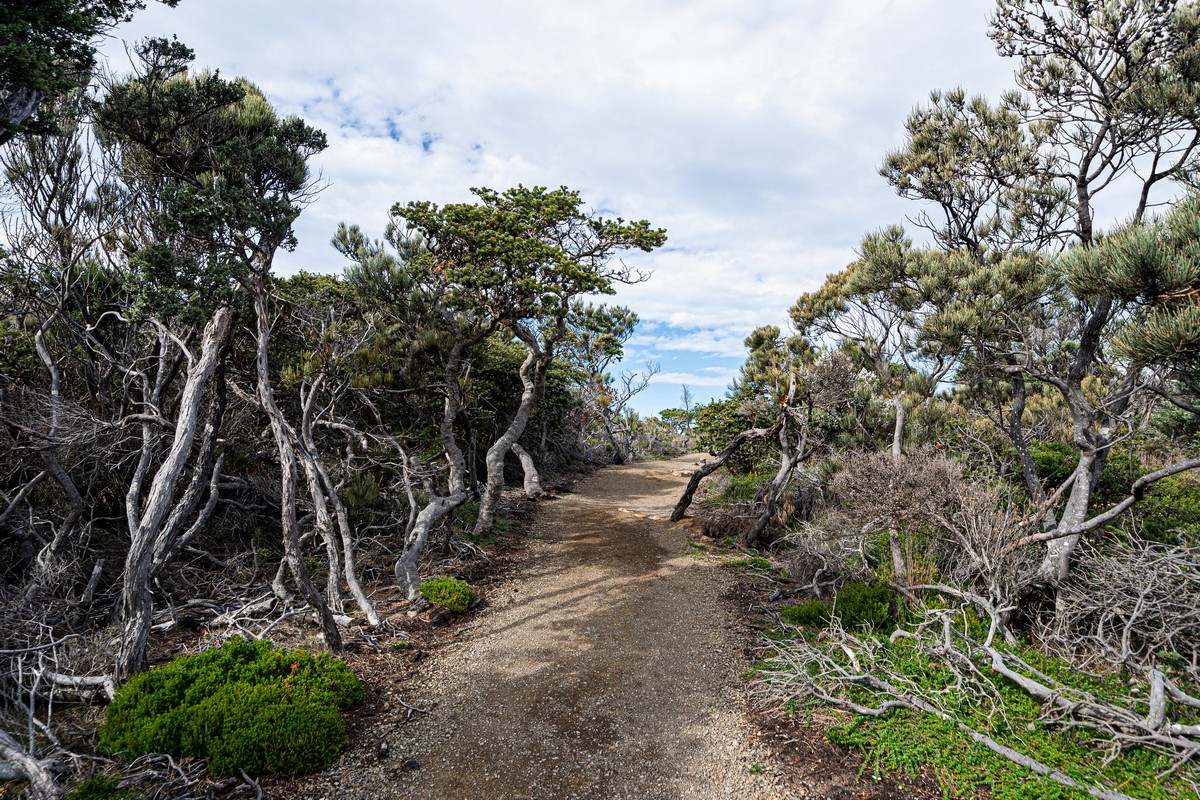 Actually, let me tell you about the history of this path!…

Making this peninsula tourist-friendly – given its natural state being covered in dense, prickly, uninviting bush – started only relatively recently. Btw: it reminded me a little of Kamchatka and its prickly shrub covering most of its untouched landscapes; but here on the Tasman Peninsula it was worse.

The peninsula remained mostly uninhabited and un-pathed until a pair of volunteers became its trail-blazing pioneers. Here’s what my travel companion, OA, found out about the history… ->

—8<—
The ‘opening’ (at least, for tourists) of the Three Capes started only in the mid-1960s, mostly based on the efforts of the Hobart Walking Club, in particular two of its members – Tim Christie and Reg Williams – who, despite the logistical difficulties of the task, continued to construct a path toward Cape Pillar every weekend – for several years! Now that’s dedication!

Just how difficult their pre-Track forays along the Three Capes were can be guessed at by the names of the places of interest here: there’s Perdition Ponds, Corruption Valley, and Desolation Ridge. // The two walkers really were ‘pioneers’ – in the 1960s! It was they who came up with these colorful – ominous – names to the features of Three Capes – EK.

Legend has it that as they were clearing certain particularly dense stretches of prickly bush that their jeans would get cut up thereby so badly that they had to take them off and put them back on back-to-front! Only then, their legs suitably denim-protected, could they carry on without drawing blood!

Later, when helped by other walking club members, they came up with a different approach: one bush-clearer would go ahead, flay the bush, then flop down on their back onto it to flatten it, then the next walker-clearer would come to take their place, and the first one would go to the next spot of bush. // All very reminiscent of a Buddhist pilgrim kora around Kailash in Tibet! – EK.

Apparently the pioneering walkers from the sixties once got rather upset – understandably – when, after much bush-clearing over many months, they came across… some kind of geographical-cartographical marker that had been placed there more than a hundred years ago! As if to make up for such a blow to the ego, they found some ‘island’, which was actually revealed to be a peninsula at low tide, and placed a ‘No Fishing’ sign there – to show that they were still pioneers, no matter what!

Now, the tracks upon the Tasman Peninsula were joined up to make one long ‘Three Capes Track’ only in the 1990s. This was after a full 8000 human workdays were spent on clearing the bush for it by the folks from the Hobart Walking Club!

Btw, the new track that we were on was opened even later – in 2015. That this new, separate track came into being at all was considered an act of betrayal by the elders in the Walking Club, but it does cut the walking time in half – so we decided to commit treason ).

Next up – designer-bench kunst! There’s a veritable permanent bench-exhibition on the peninsula. And not just benches but sun-loungers too. Perfect for some comfortable, reclined meditation…

Some have names. This one, for example, is called ‘Sex on the Cape’! 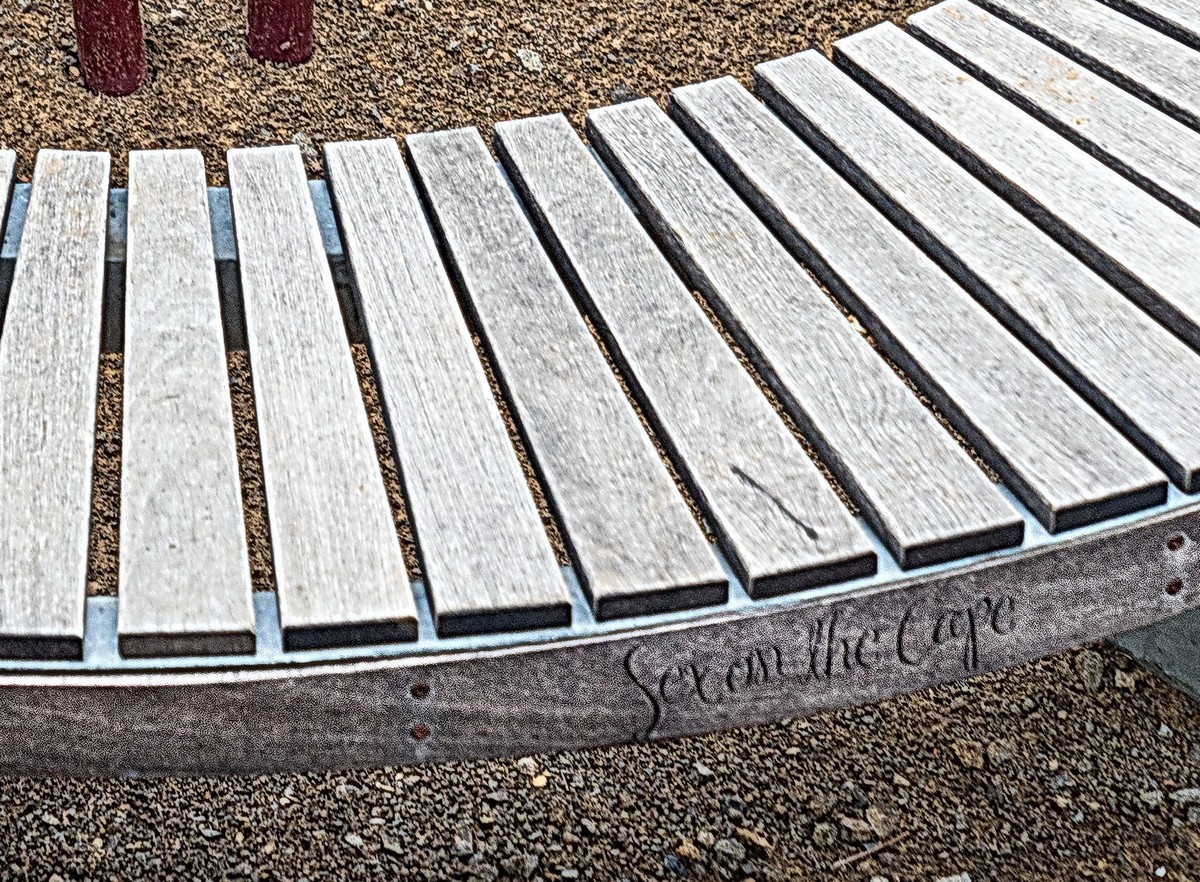 This one has something to do with six types of mammal that live nearby. Er, ok ). 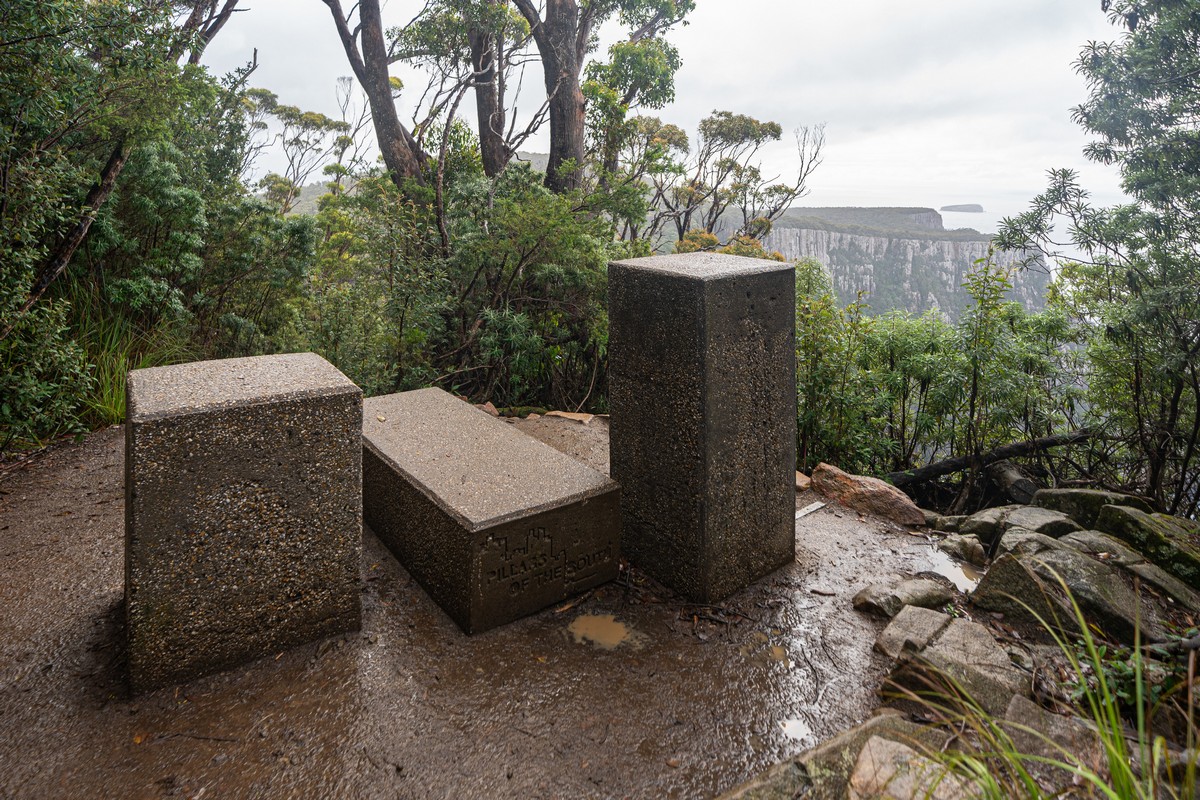 We come close to the cliff’s edge… 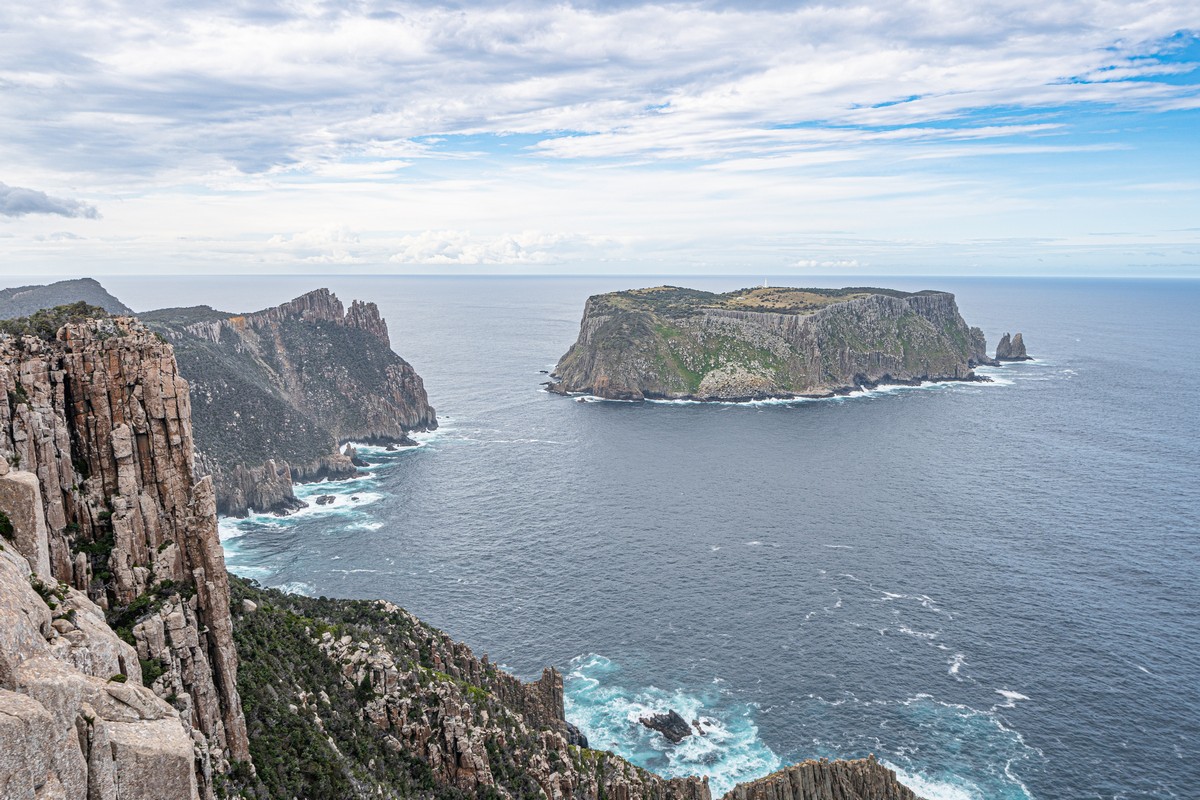 And when we get right up to the cliff’s edge – mind > blown! And here are Tasman Island and the Blade:

The lighthouse on Tasman Island is the highest in Australia (due to its being installed on the high clifftop). It was commissioned in 1906, and operated up until 1977 by folks who lived here permanently.

To work as a lighthouse keeper there were some unusual requirements for the candidates: one was you had to have a family (who’d live with you on the island). Another was… you had to have all your teeth pulled out! This latter requirement was due to the fact that, given an infection (common with teeth intact back then, it would appear), it would take days for help to be summoned – only by signaling to a passing ship, or getting a message to Port Arthur by pigeon or semaphore!

The island is so remote and cut off from any semblance of civilization that it was named ‘Siberia of the South’ by one wife of a lighthouse keeper. Still, they made the best of a lonely situation: they kept sheep and goats, and even a horse to help with the cable system for loading and unloading.

One of the main tasks for a keeper was to maintain and clean the lighthouse lens – some 2.5 meters tall. This involved constant contact with mercury – sending a few keepers mad, at least for a while. Thus, to help out with this hazardous task there were always two assistants who lived on the island.

Though it isn’t used any more to help ships navigate, it is still in use today.

Our Fan Club also told me how there are the Friends of Tasman Island, who support the place on a volunteer basis. They renovate old buildings that fall into disrepair and perform other kind deeds. When they save/collect enough money to rent a chopper, they fly in and get to work on the latest restoration project, and they do so a few times a year. They even have a website and are on FB! 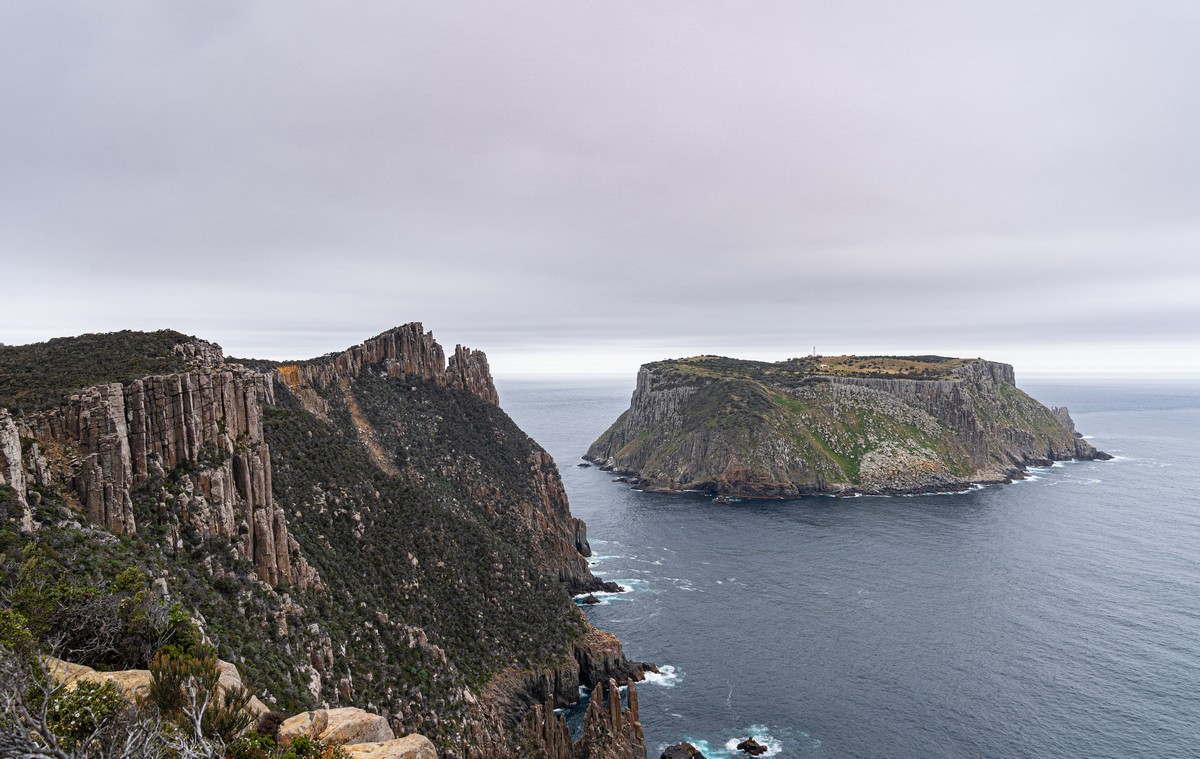 But we’d still a way to go. We were headed along The Blade further toward Tasman Island -> 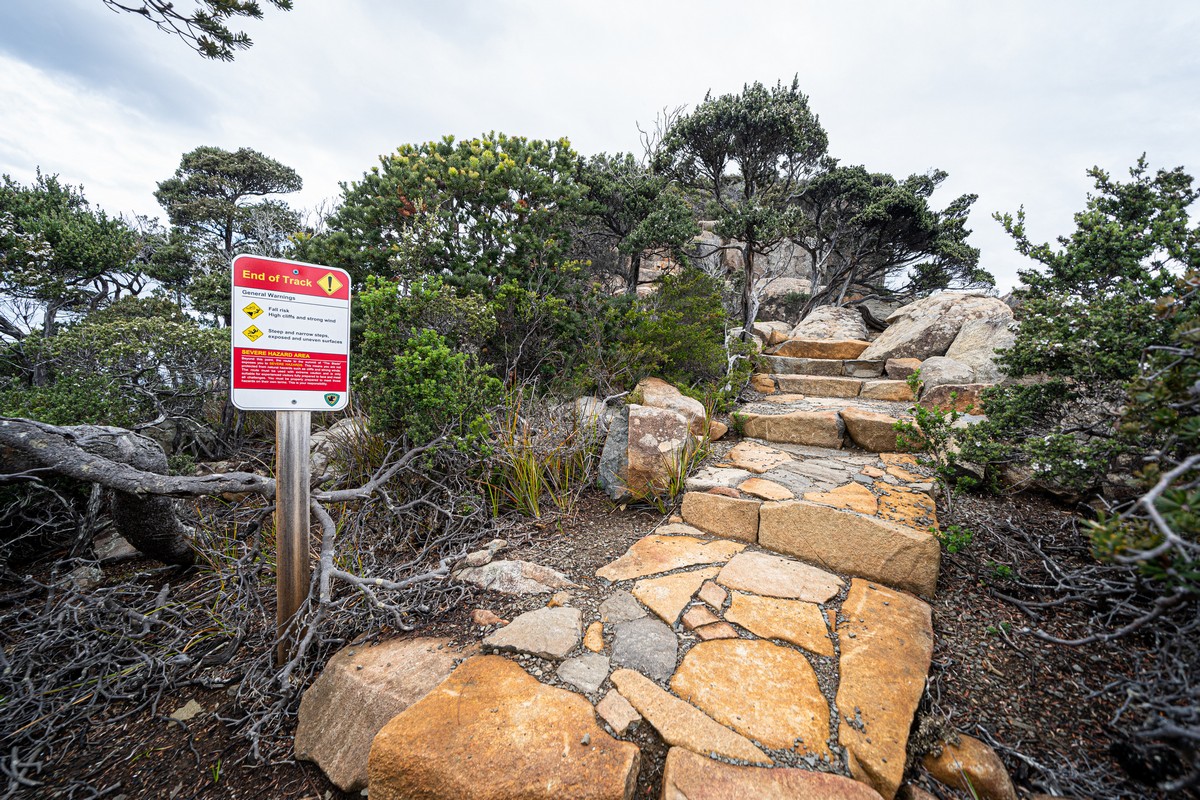 We reach the ‘End of Track’. But it doesn’t say you can’t carry on walking. And the guides weren’t against it either. I reckon that’s a mere disclaimer – ‘go further at your own risk’ kinda thing… 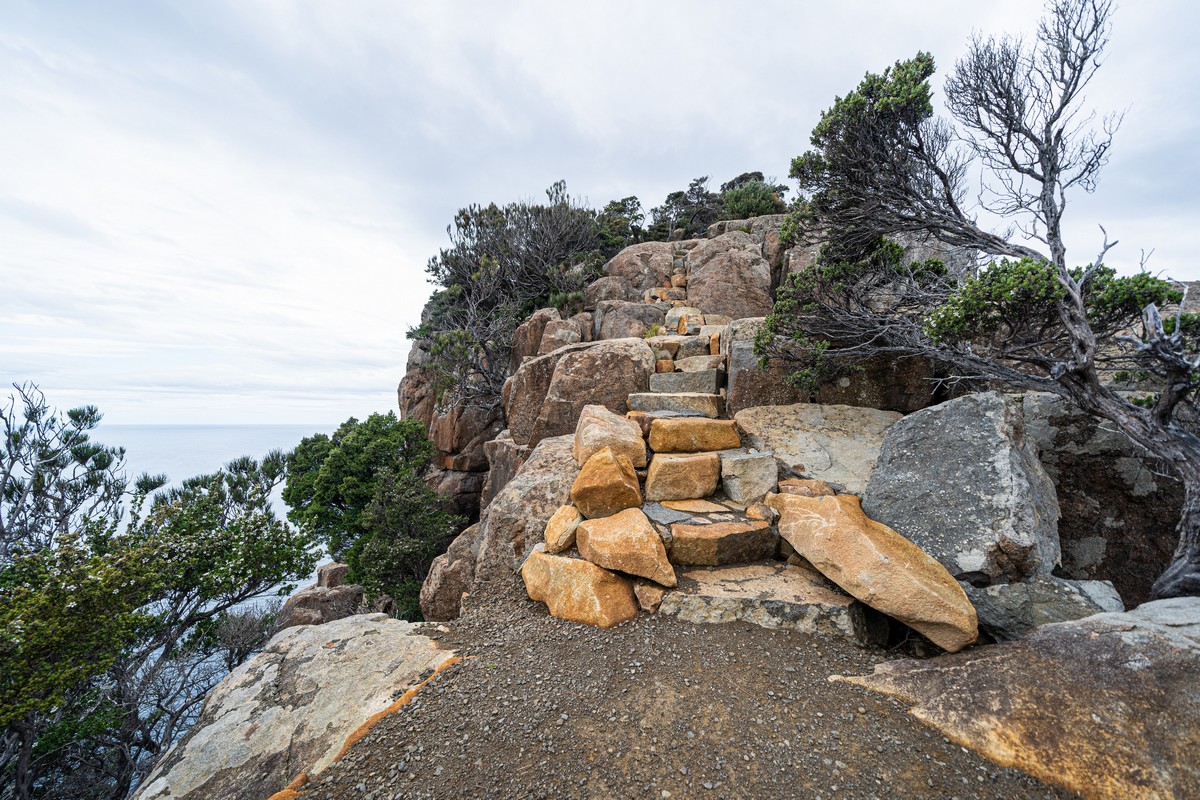 Narrow path, sheer drops both sides; probably slippery stones when rainy. No rain today though – off we pop!… 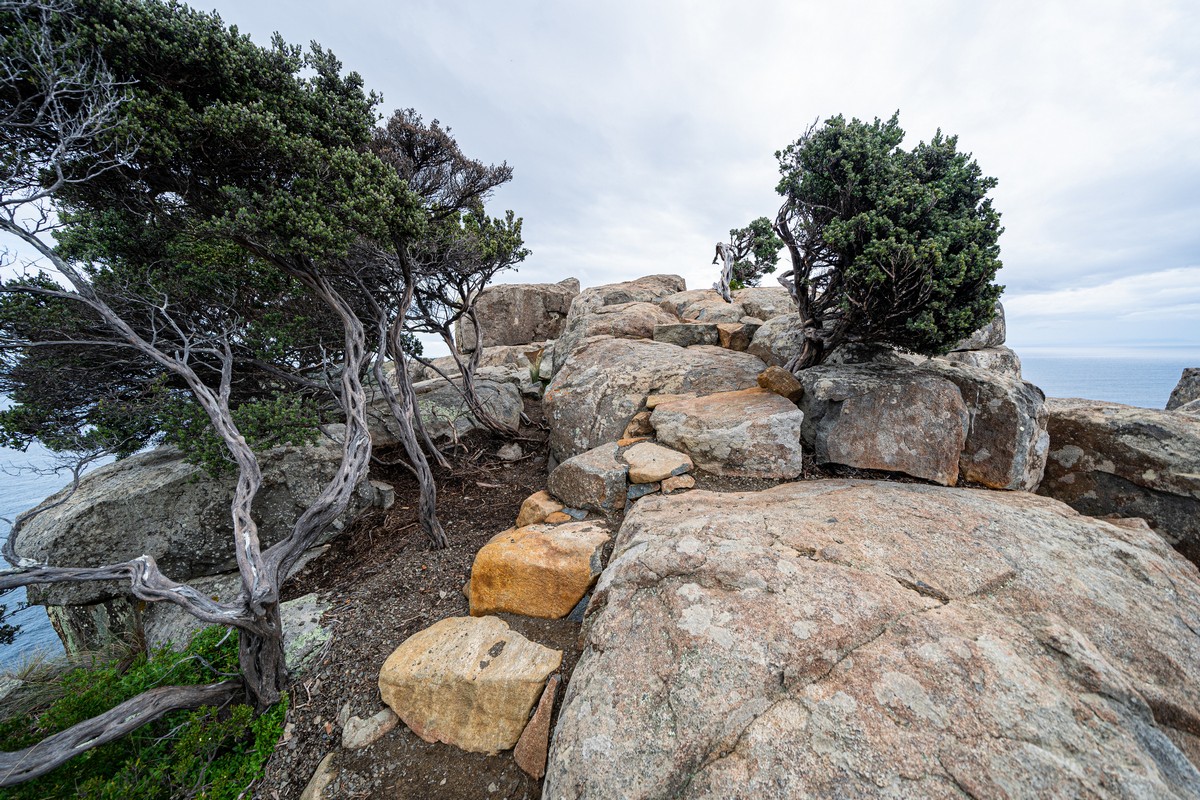 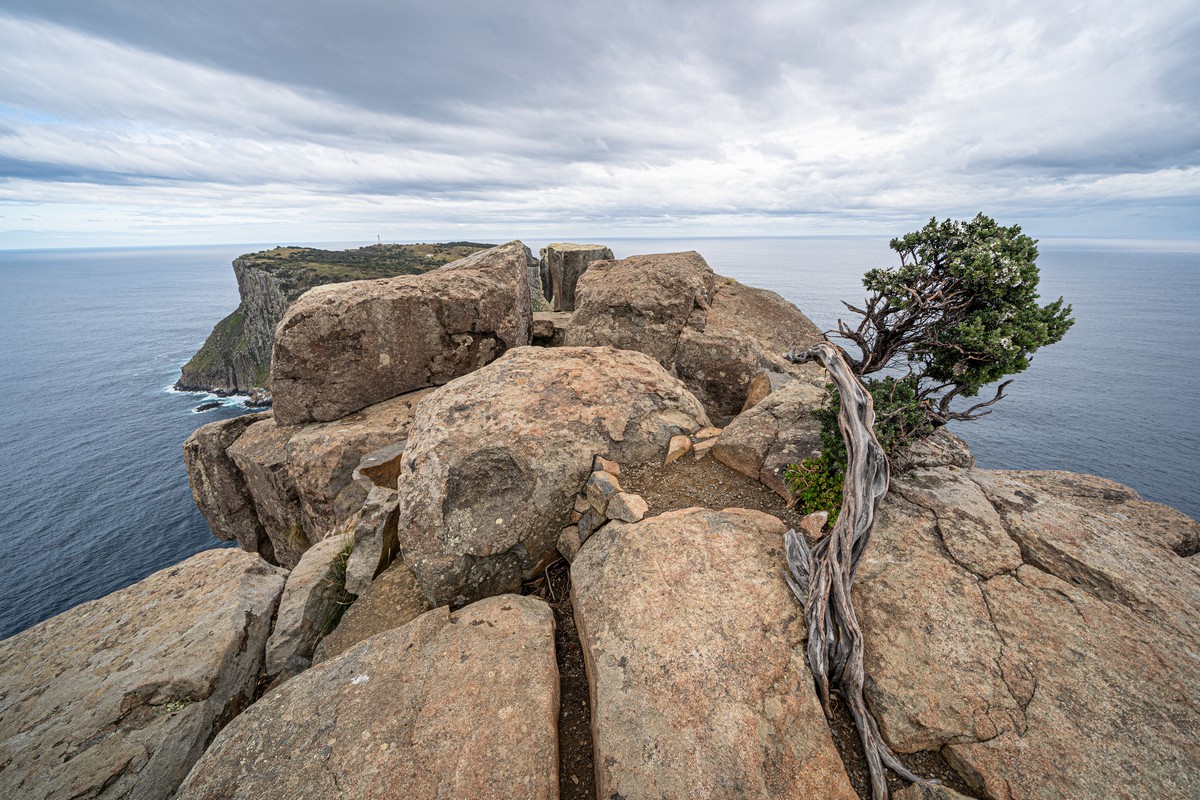 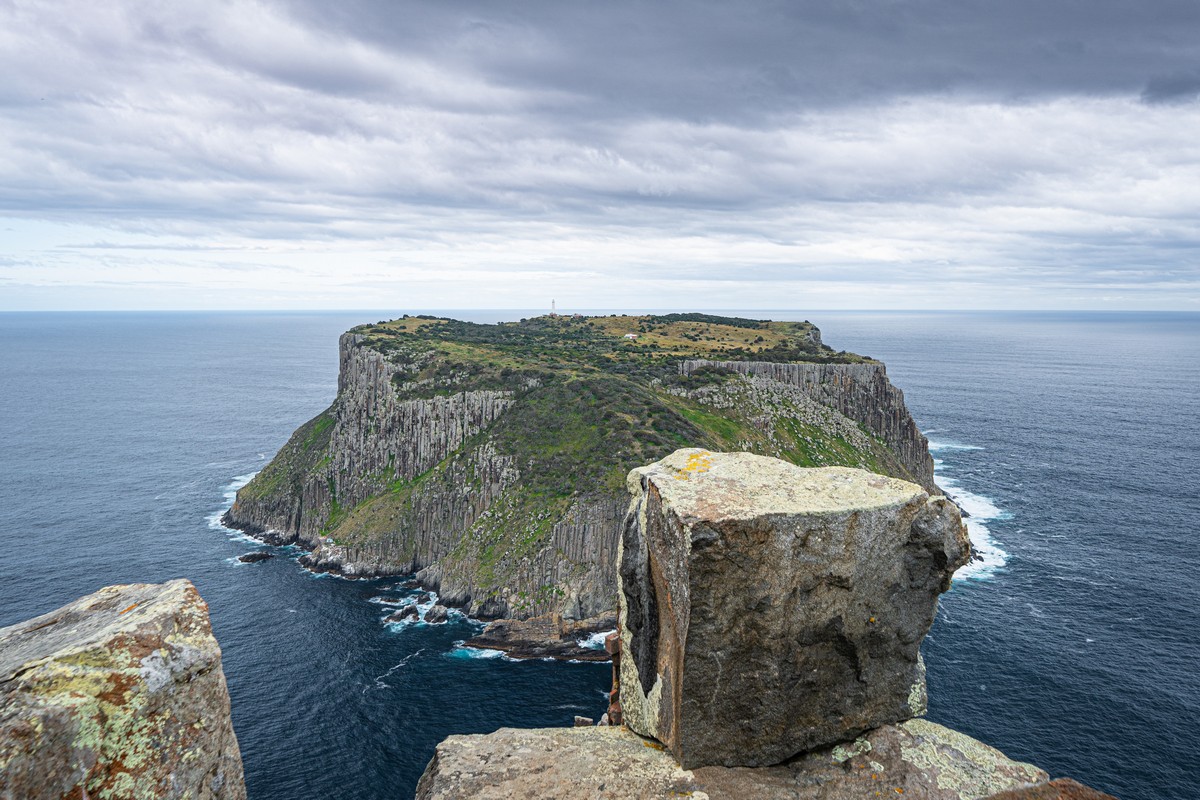 We make it to the very top!…

Oh yes – it’s for moments like these that it’s worth traveling half-way round the world, then trekking for two days (albeit spending the nights in comfortable lodges) -> 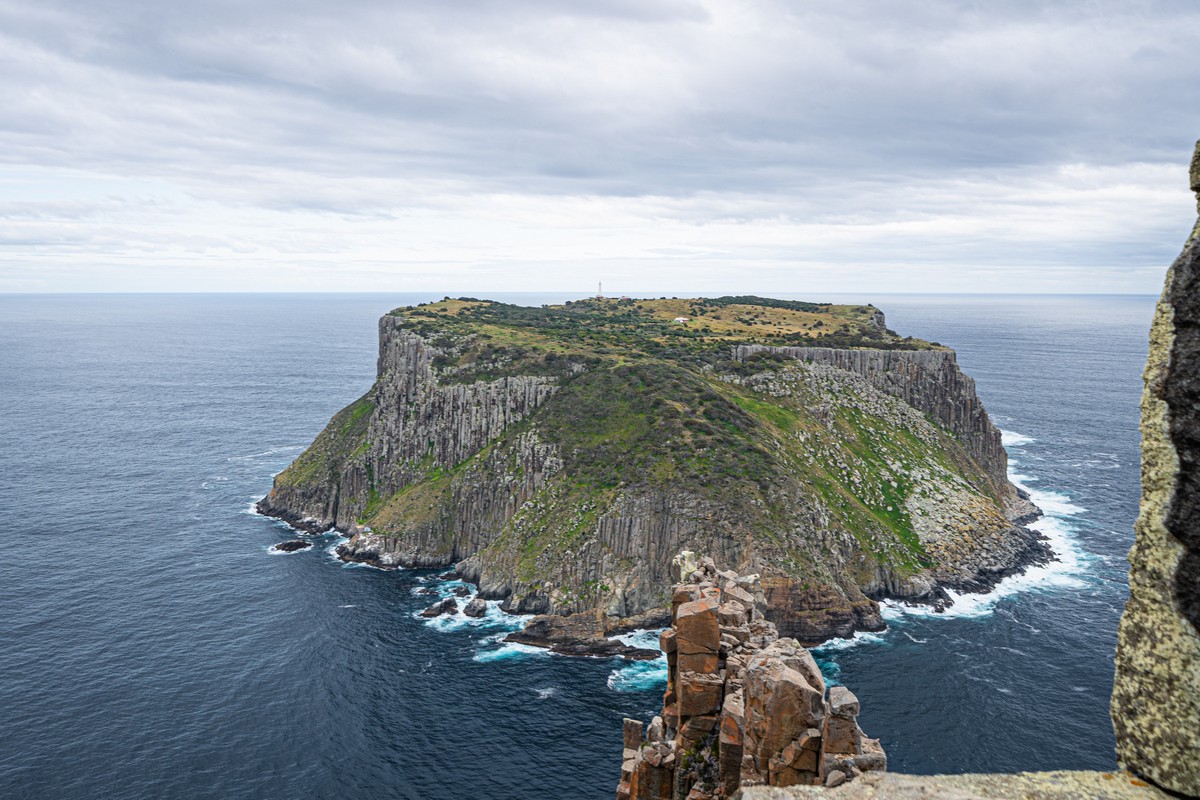 Don’t look down! Sure, it was a great view from here, but it was a bit unnerving too… 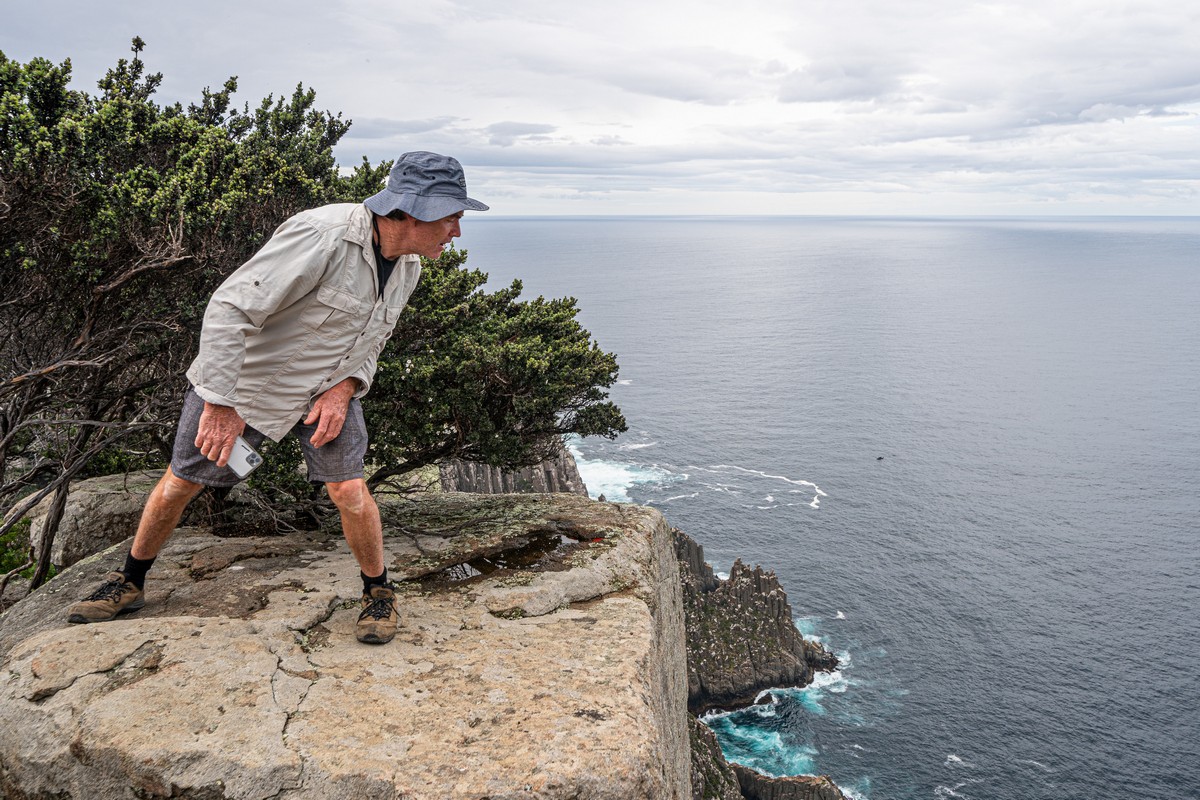 Pretty. But I’m not walking over them! ->

We’d come from over there to the left. To the right – Cape Pillar, where we were headed next…

We’d just been up there at the peak: 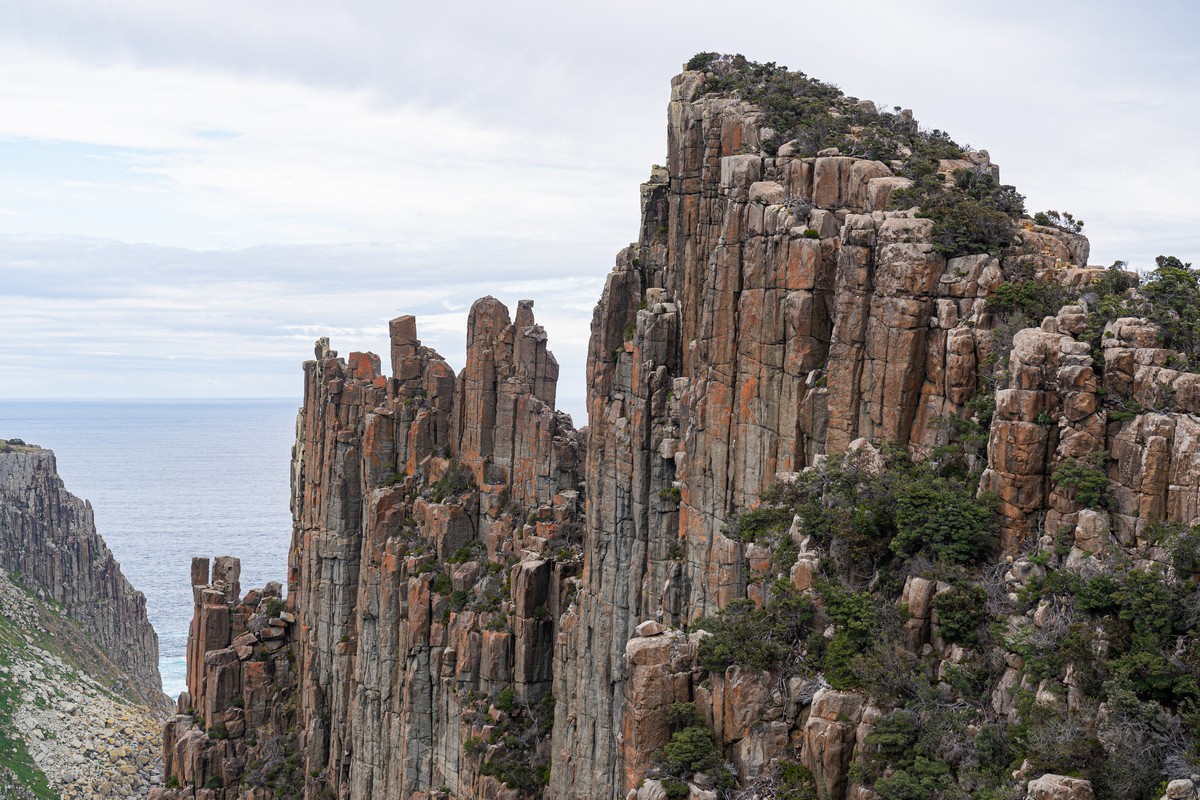 And this peak is our next destination: 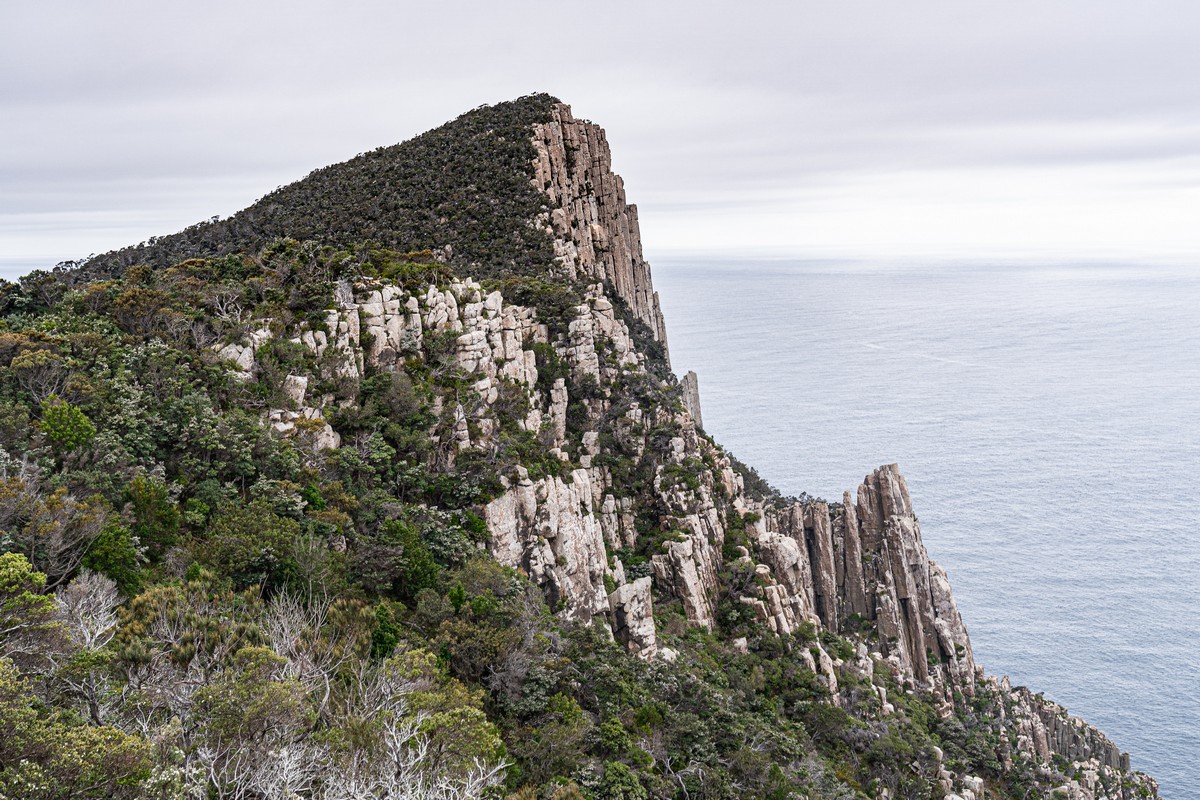 And these are what are claimed to be the tallest sea cliffs of the southern hemisphere: 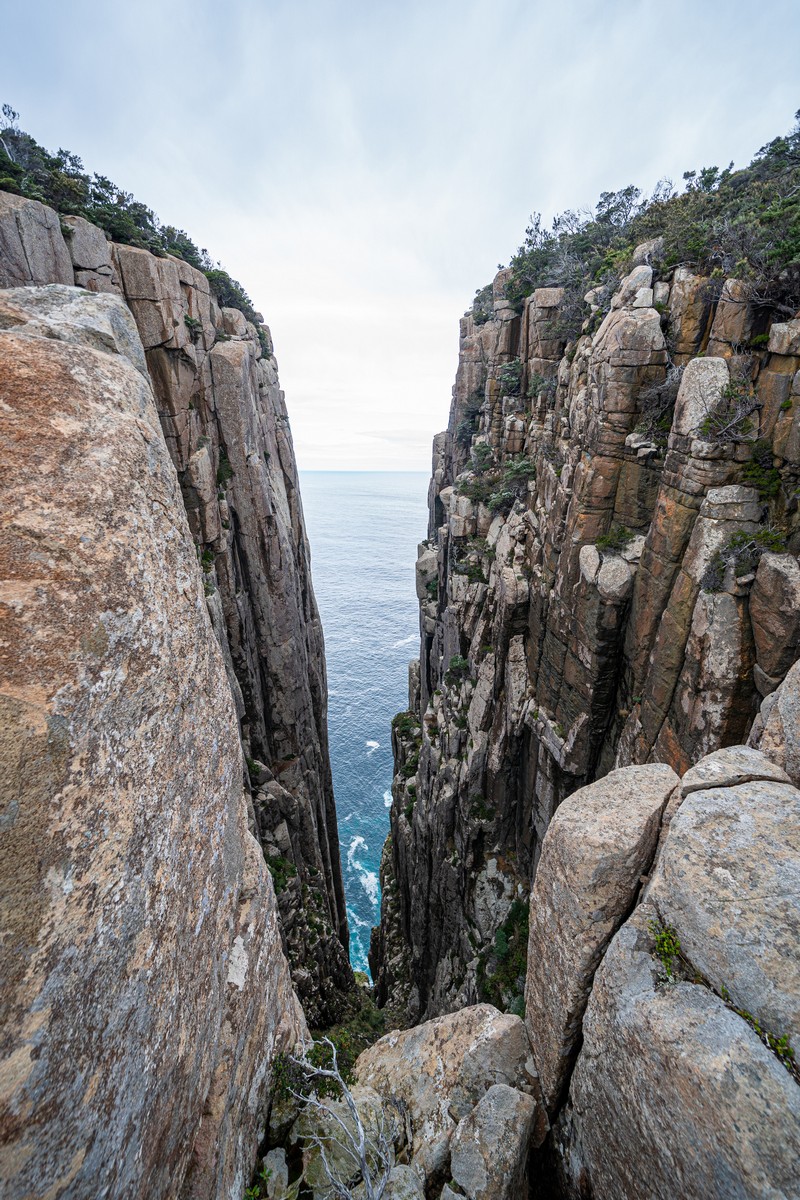 Hauy Cape – where we were walking the following day: 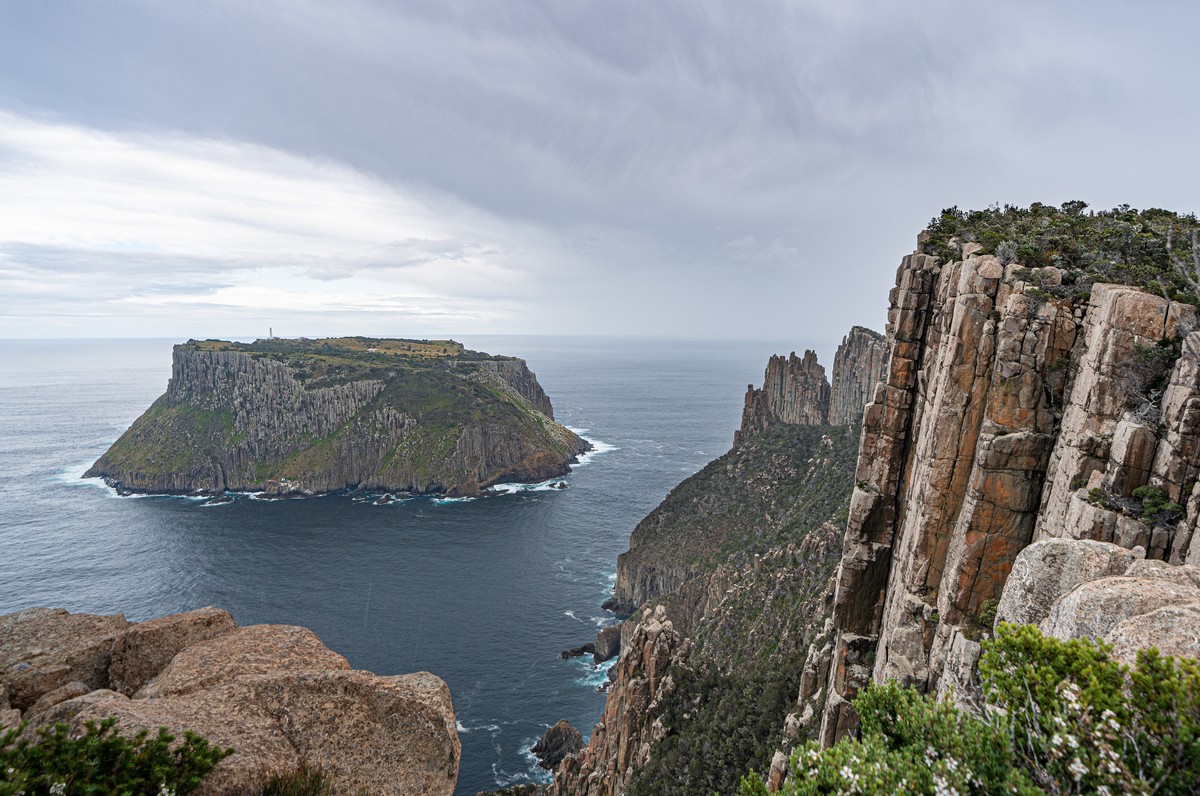