En route from Lhasa to Shigatse, we dropped by two more Buddhist monasteries that were most worthy of our attention. The first: Pelkor Chode Monastery, aka Palcho Monastery, aka Shekar Gyantse, in the town of Gyantse (aka Jiangzi Zhen), whose spire is more than 4000 meters above sea level.! 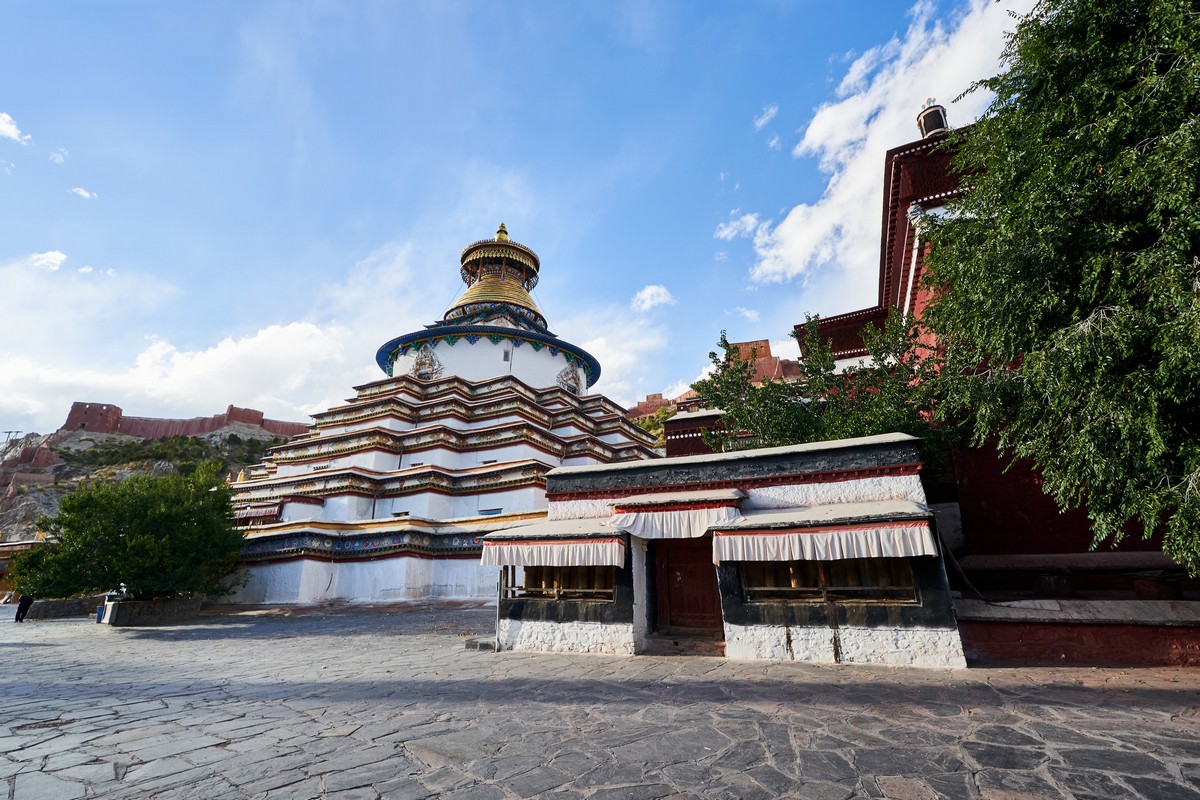 The entrance to the monastery is most humble and unassuming: 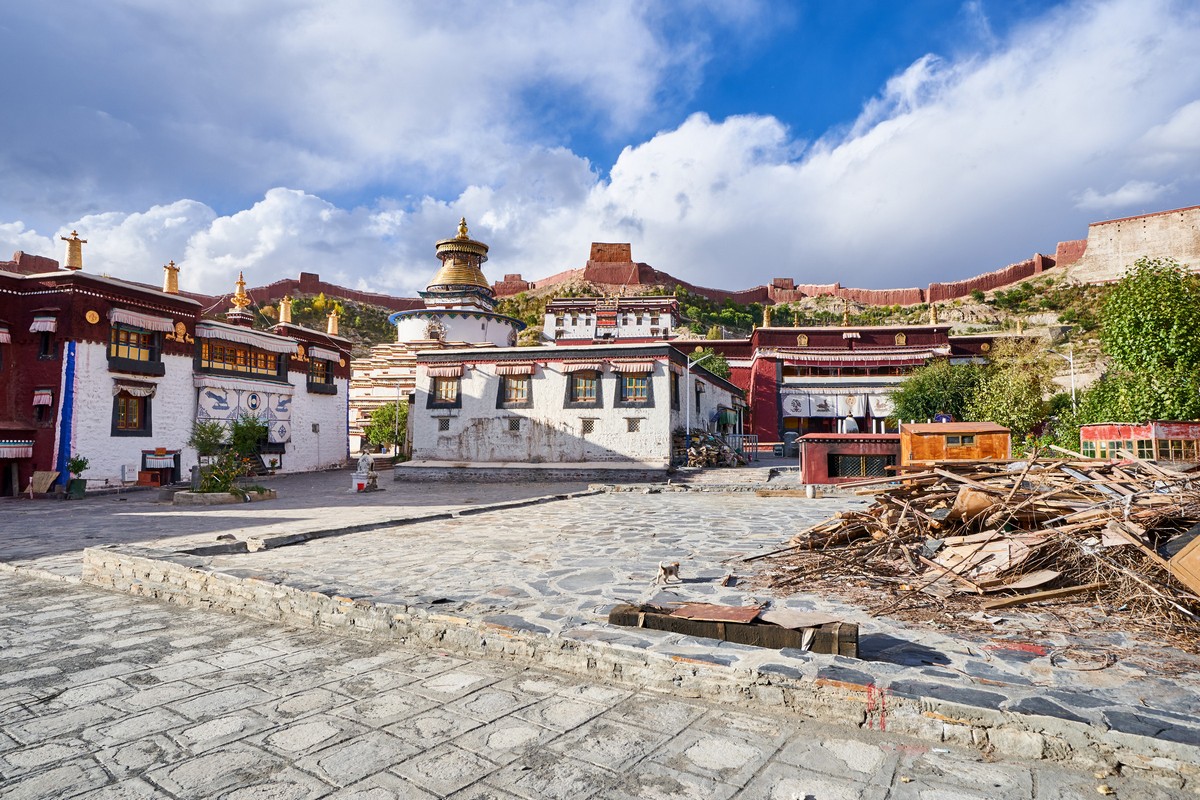 The monastery was built nearly 600 years ago. Though not one of the main Buddhist shrines of Tibet, it does allow photography! Naturally, we took advantage of this fact…

Here’s the prayer hall. I wonder – when the monks are here repeating their mantras, are tourists allowed in, and with their cameras? When we saw monks praying in Lhasa it was really something.

Of course this temple has a name. However, alas, I missed the moment during the excursion when we were told it. And I can’t find it on the internet either (. 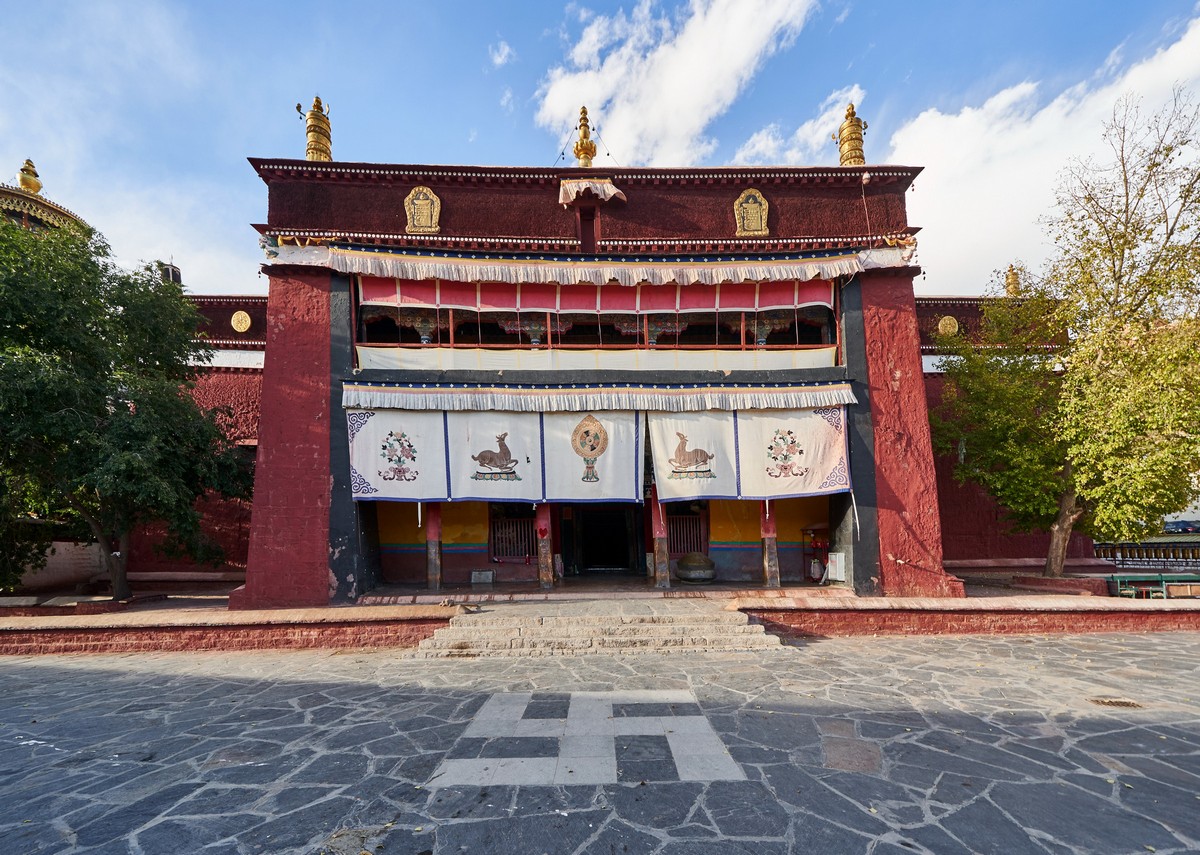 The main attraction of the monastery is this here Kumbum – a multi-storied stupa-aggregate of chapels. Apparently it’s delightful inside; alas – it was closed. There weren’t many tourists that day so the monks decided to shut up shop early. 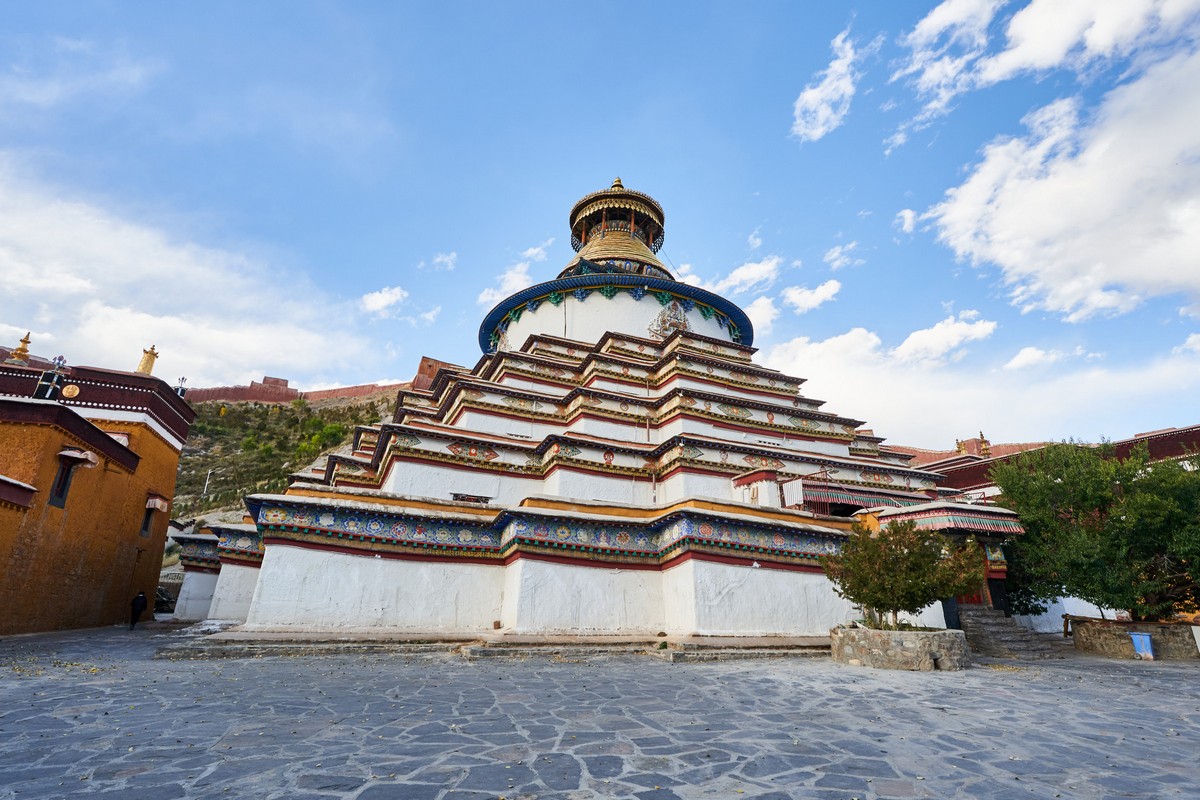 At least we got a look inside the neighboring building:

What’s this? A store room?

A workshop? Those multicolored figures are made here: 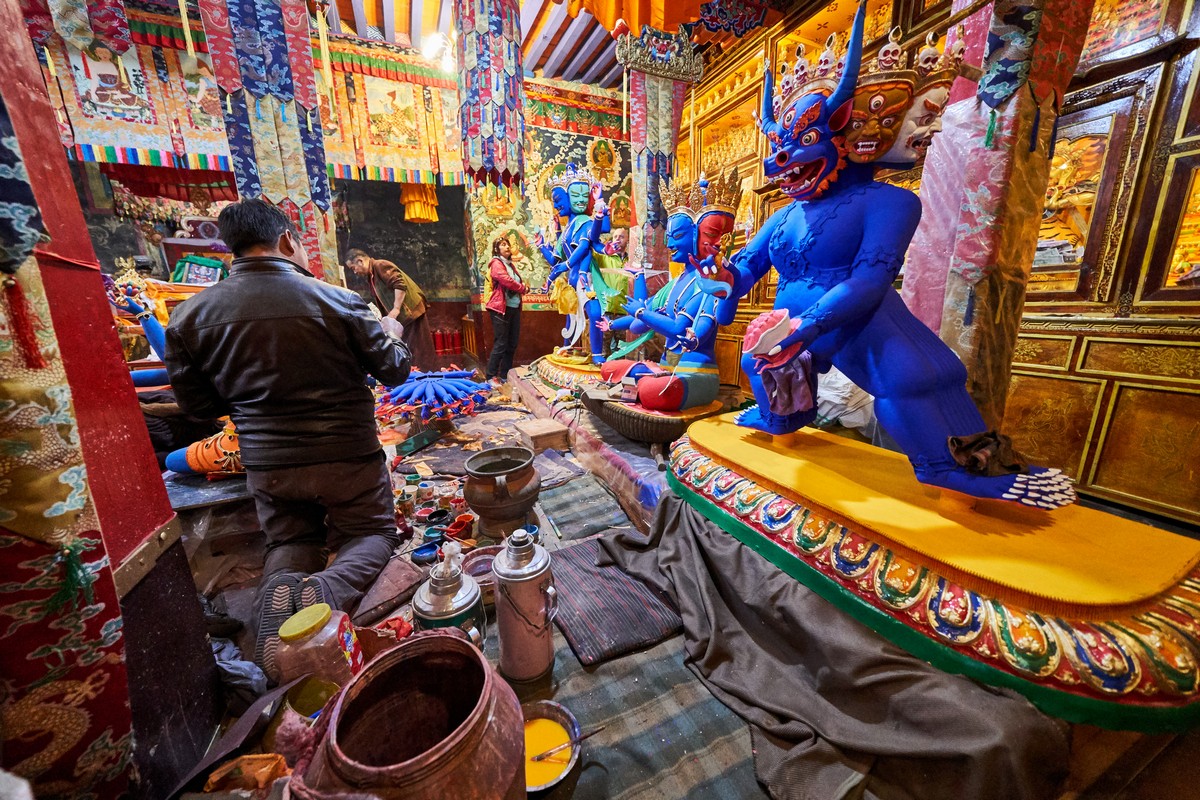 Since the main attraction was closed – we simply had to complete a kora around the monastery:

And a view of the town. Clean, neat and tidy again: 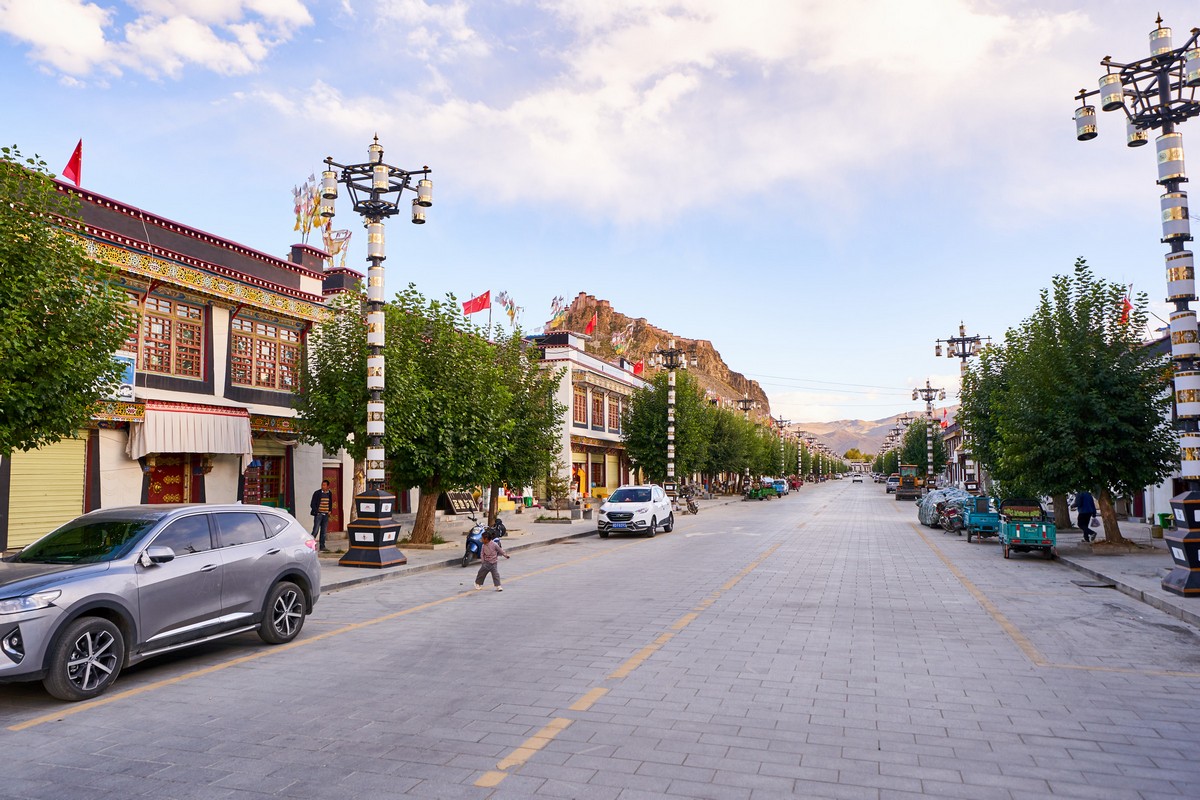 On a hill near the monastery there’s a most attractive fortress. And the inevitable telegraph poles spoiling the perfect photo thereof ). 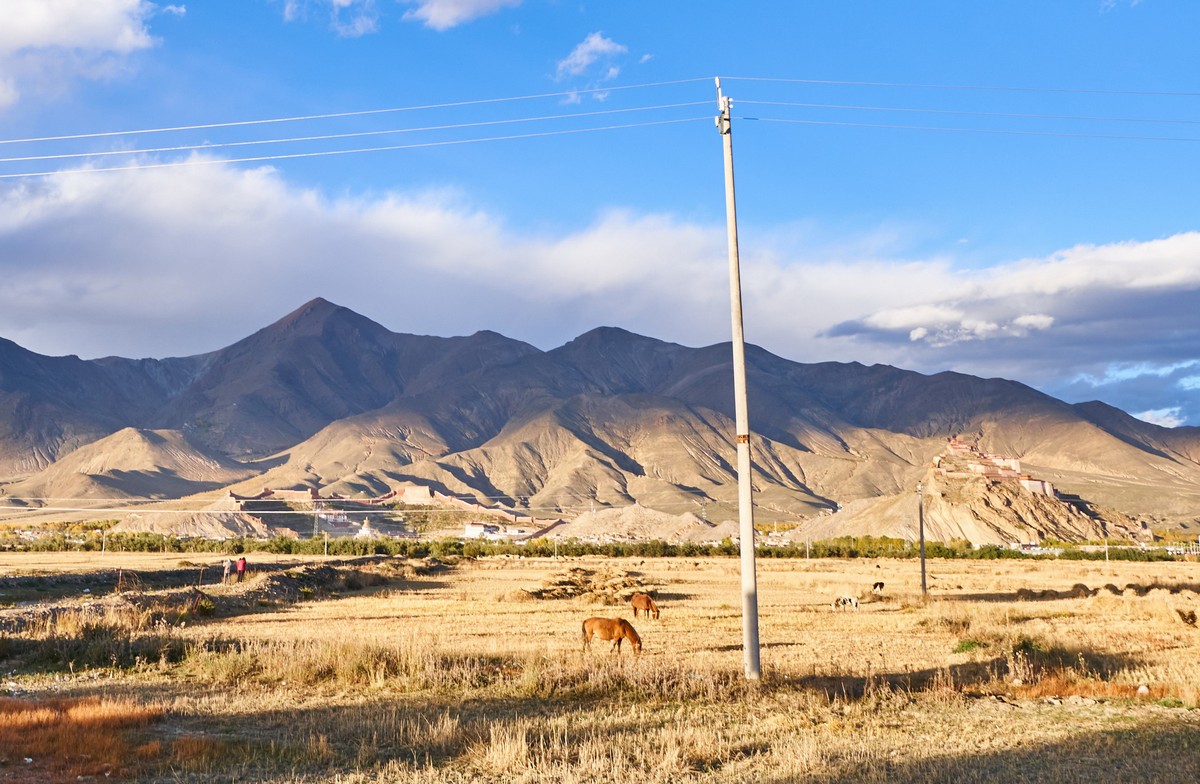 But it wasn’t as if it were the first time pesky poles were spoiling pics. We’ve plenty of experience in dealing with them; accordingly, DZ drew from that experience here: out came… the ‘silencer’ attachment ) -> 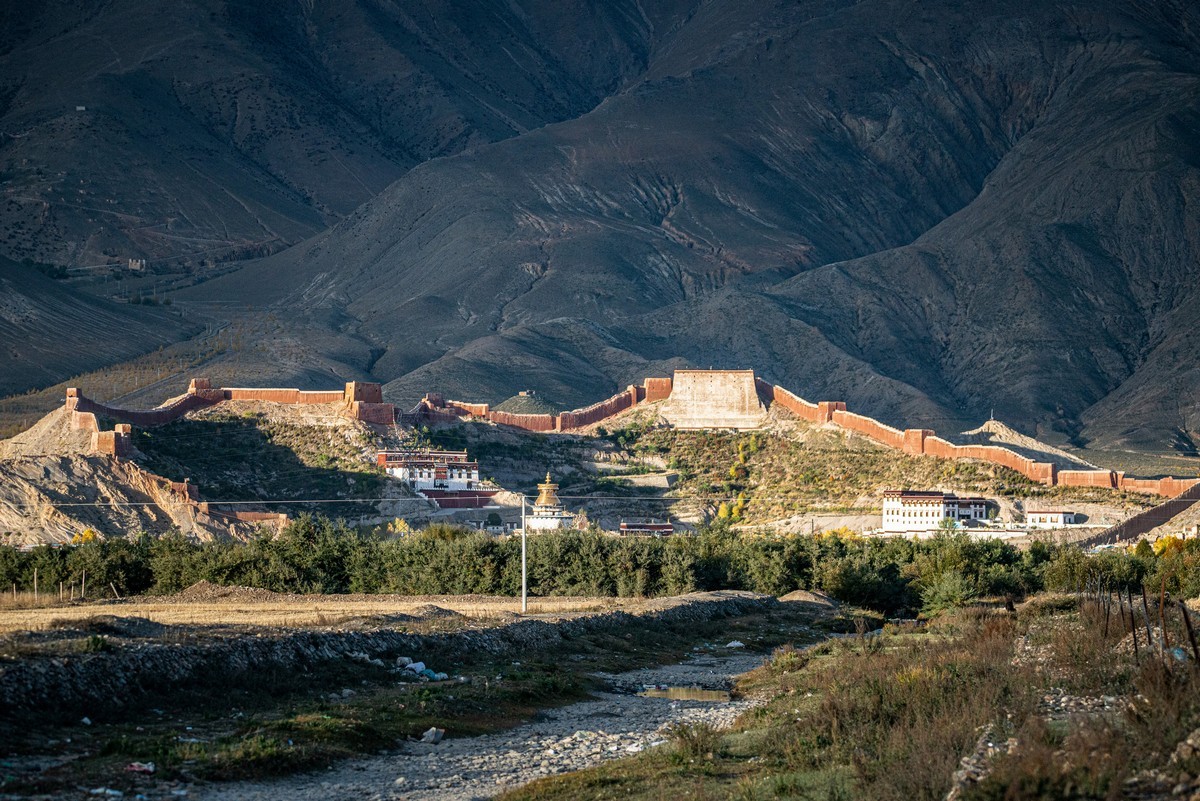 The ‘silencer’ always makes sure he reaches his ‘target’ ).

I mentioned above that we visited two monasteries this day. The second was the much bigger Tashi Lhunpo Monastery in the city of Shigatse, the traditional home of the Panchen Lama.

As far as I recall from the narrative given by our guide, the Dalai Lama and Panchen Lama have slightly different roles. The former has administrative power; the latter – spiritual. Accordingly, welcome to the spiritual capital of Tibet!…

Alas, photography inside the building is forbidden. So to see the antiquities you need to come here and see them in person.

What stood out for me the most were the stupa mortuaries in which the remains of the first Dalai Lama and several early Panchen Lamas lie. The stupas are huge, and most (all?) of them are finished in gold and precious stones. For some reason photography here was permitted. Accordingly: 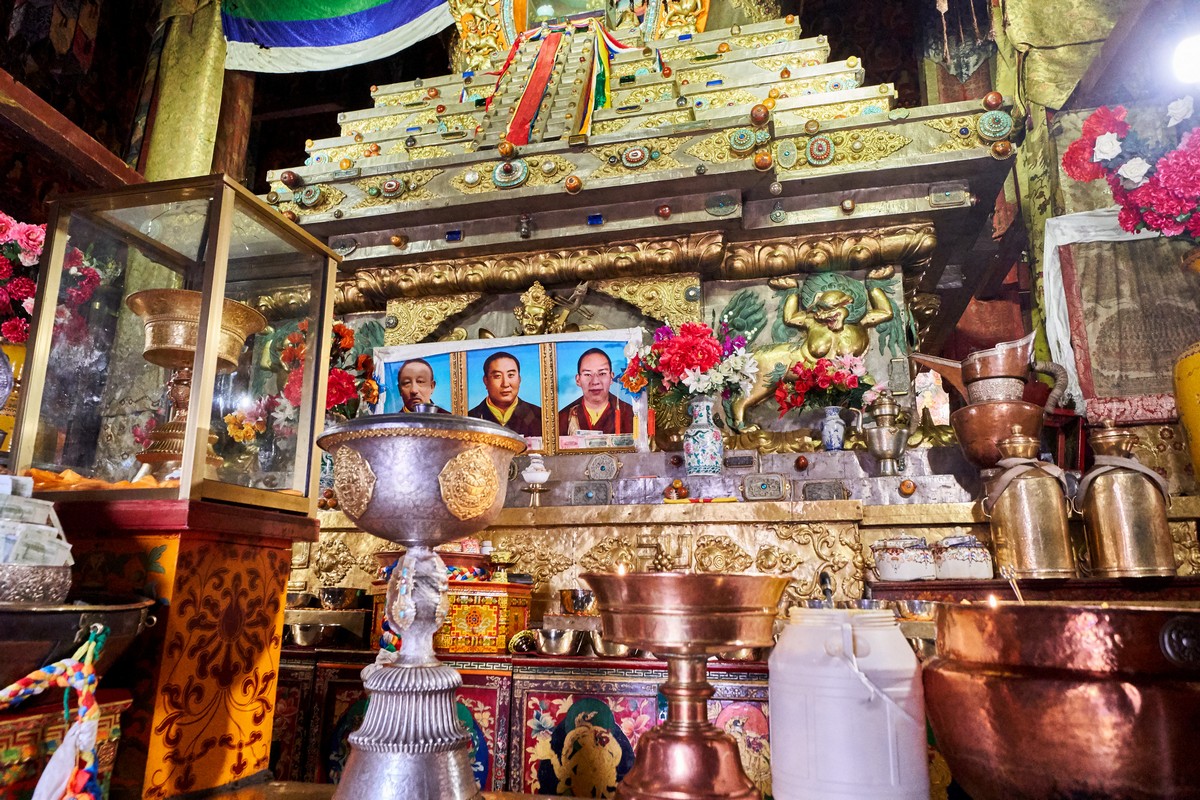 But what’s inside the others I can’t show you. I only have pics of outside the stupas and the courtyards.

Hmm. Not sure who they’re referring to, but whoever it is, best keep clear ) -> 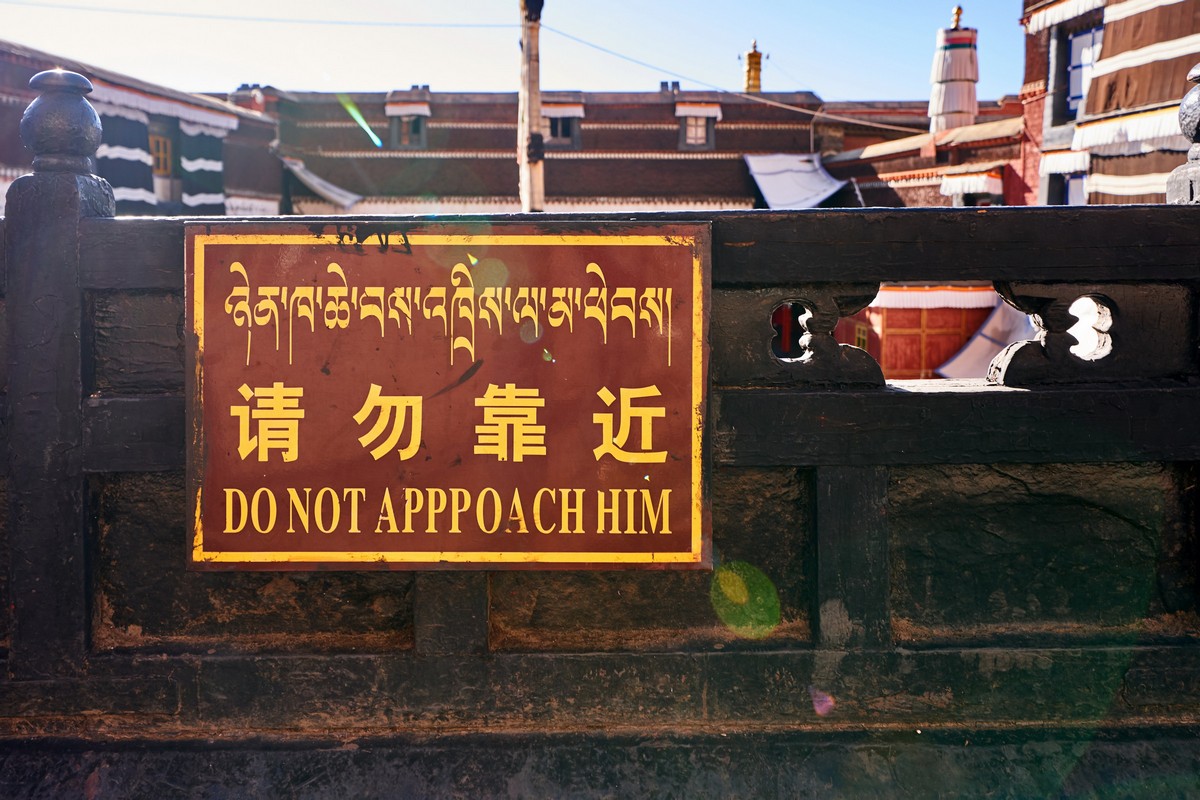 Tibetan women looking the euro-tourists over -> 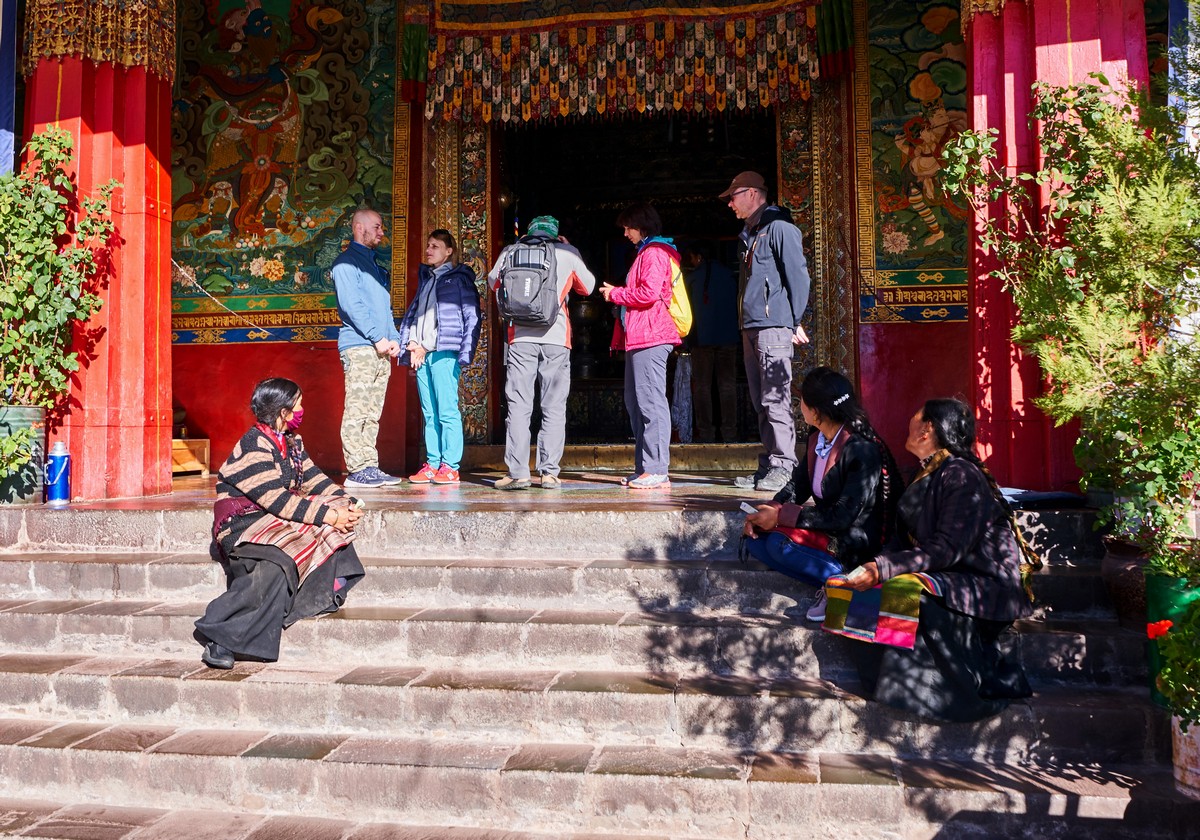 The view of the city from the monastery:

And that’s about it… 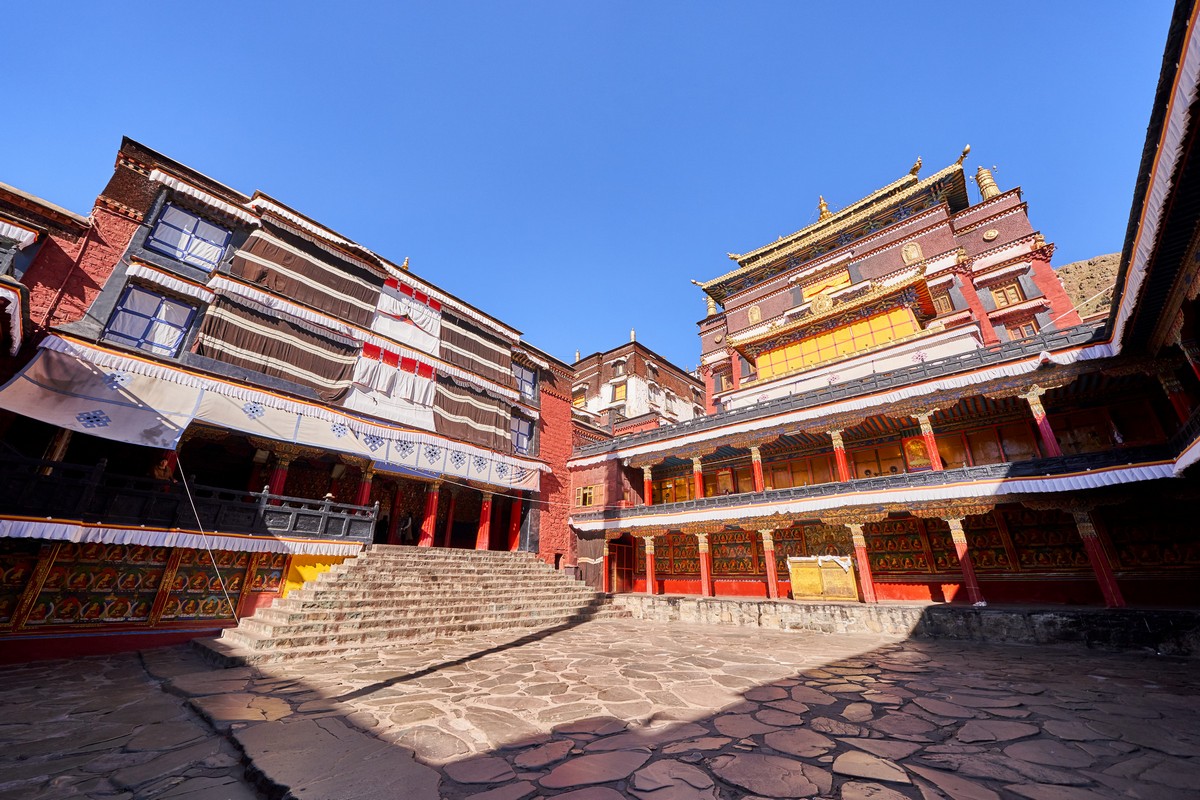 Ah yes – check this curiosity out: 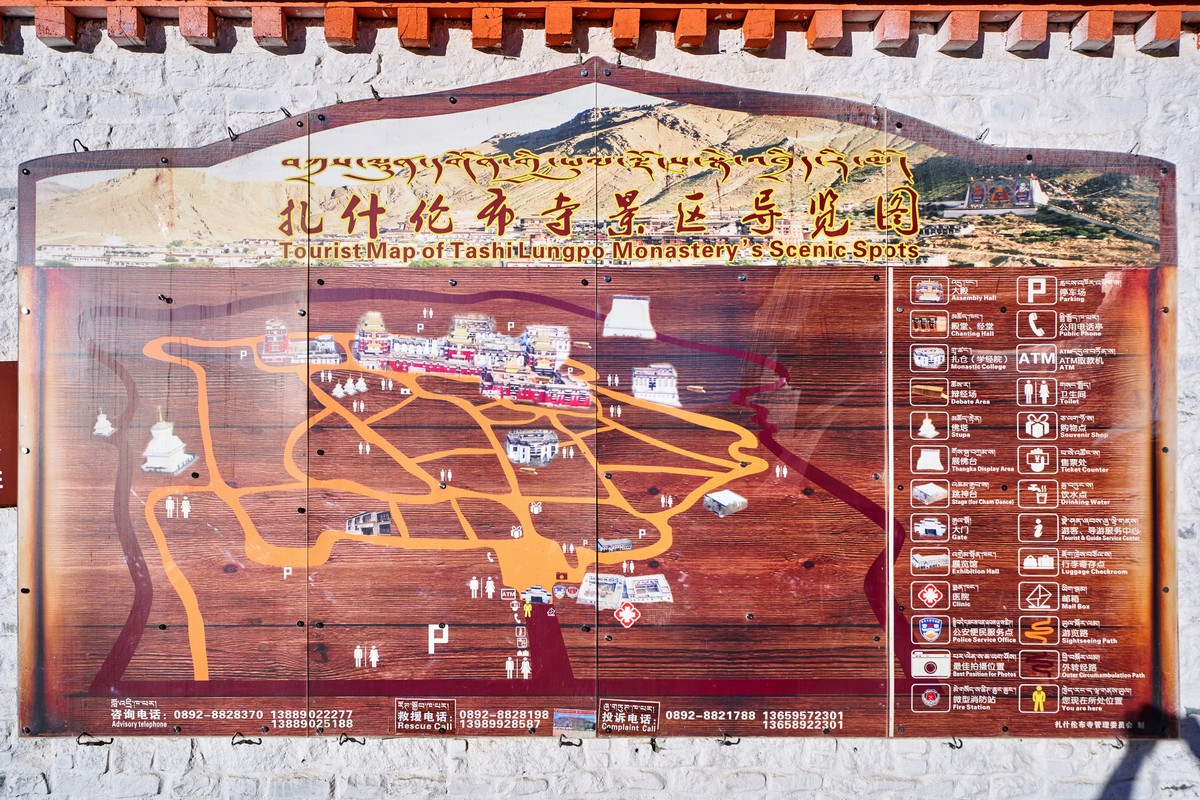 See the man-and-woman signs on the map? Look how many there are! For some unknown reason almost all monasteries in Tibet have a great many restrooms! Sometimes there’s one on every corner. Why? Maybe when there are thousands of pilgrims here they’re simple necessities? 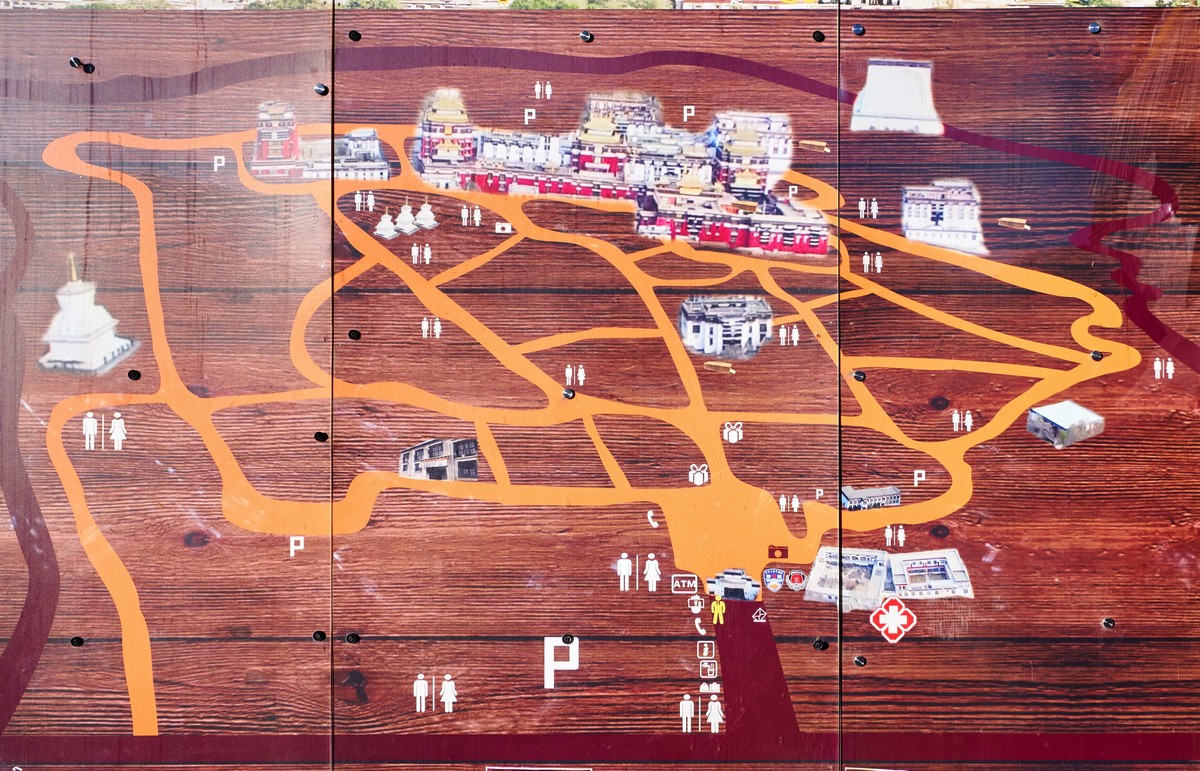 And that was that. It was back into our ride and onward we cruised – toward Mount Everest!

The rest of the photos from our Tibetan trip are here.