Here we are, back with more tales from the Tibetan side, particularly – walkies-time around the capital of the Tibet Autonomous Region of China, Lhasa. First up – panoramic pic of the city from the top of the hill upon which sits Potala Palace: 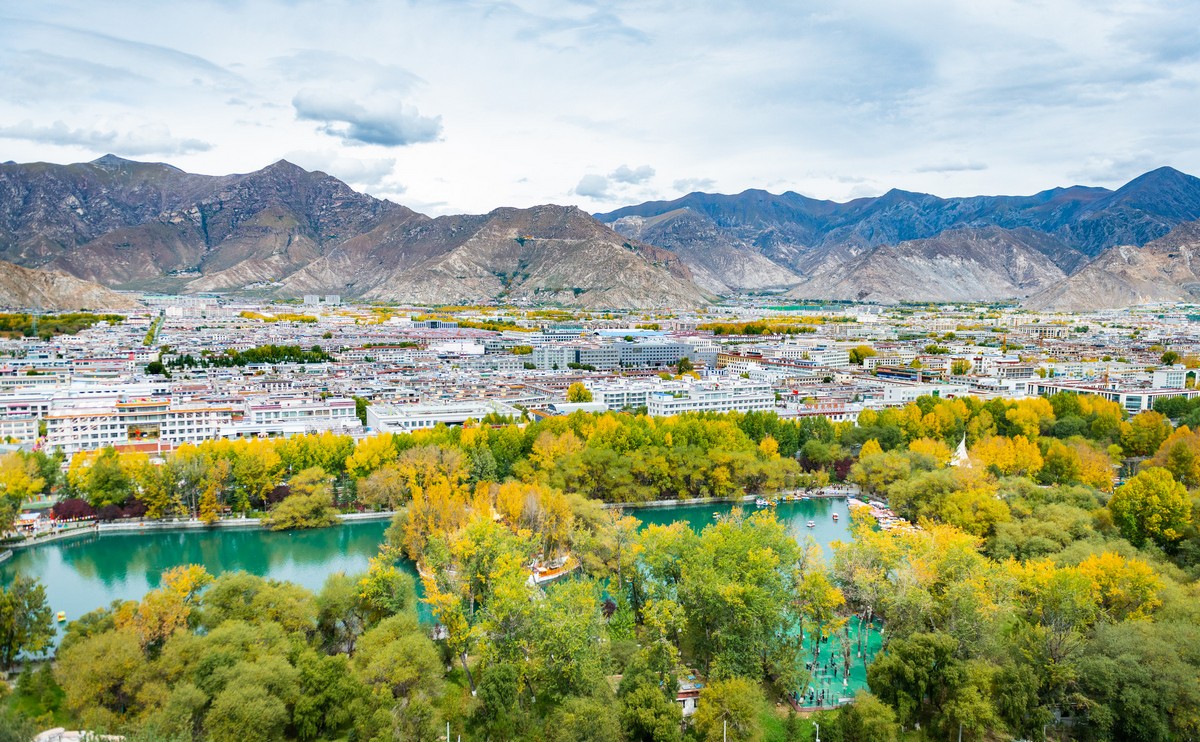 We weren’t going to walk around the whole of the city, just its central part that surrounds the Jokhang, which I told you about in my post on Potala.

The first thing I’ll say about the place is that downtown, plus a few other neighborhoods a bit further out we noticed in passing, are very neat and tidy and litter-less. Which is pretty impressive given that, just the week before, the 70th b-day party of the PRC was thrown with much fanfare; some of the decorations still hadn’t been taken down. Actually, every year they celebrate National Day, but last week’s was a jubilee. Another ‘actually’: the National Day celebrations are also called Golden Week, but there are two Golden Weeks in China in a year; the other is Chinese New Year, in January or February. But I digress…

Still on a Golden China theme… over the last few years it seems to have become tradition for me to visit China every October/November – right after fall’s Golden Week, when – wait for it… – hundreds of MILLIONS of Chinese move about the country in full happy-tourist-holiday mode. This year, apparently, a full 800 million traveled around the country! Yes, as in – nearly a BILLION folks!!

Now, that previous paragraph was all to tell you why we travel to the country during the week after Golden Week, not during it. I could have just shown you the video, instead, I guess:

The week after Golden Week, everyone’s had enough of letting their hair down and traveling the country and is back at work, so it’s nice and quiet. Here are some of the decorations still up, btw:

So, walkabout – around Jokhang, here: 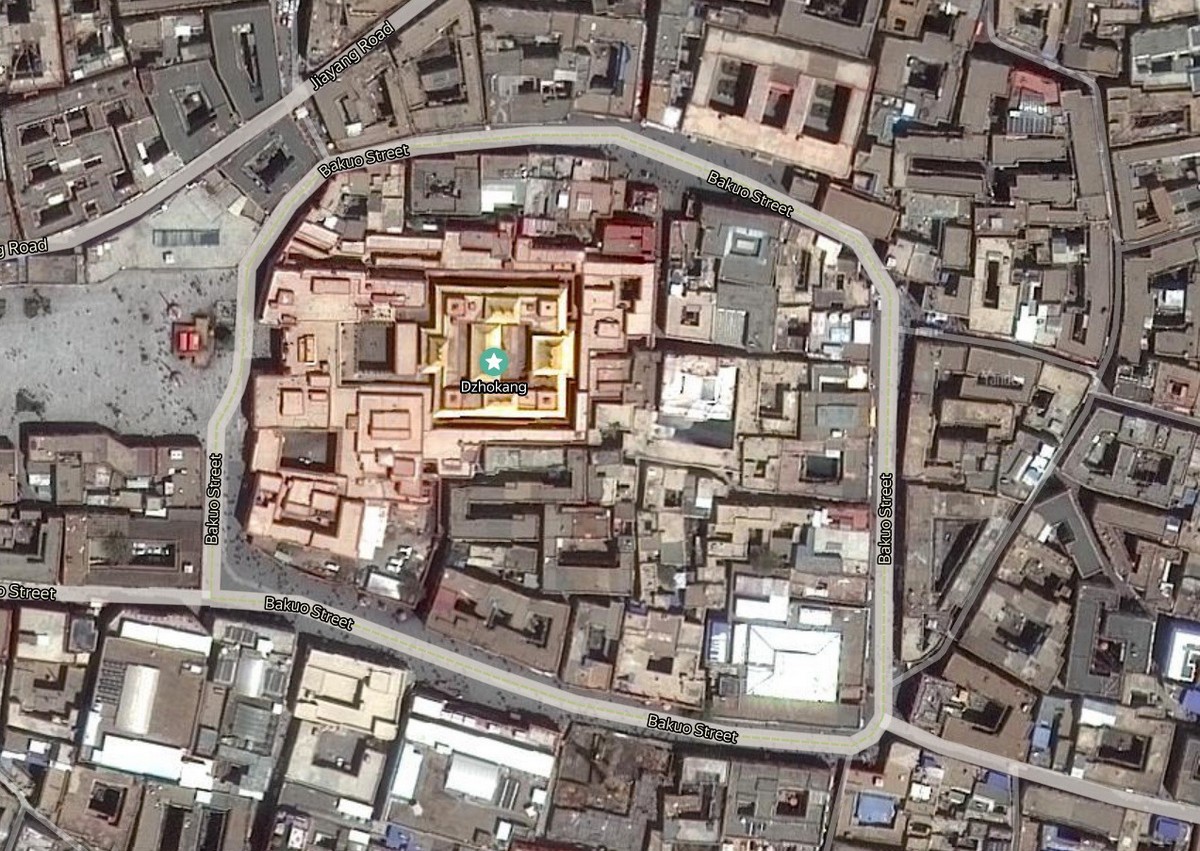 Here it is at night:

Btw: did you notice the wide line in the stone paving in the last pic? This one: 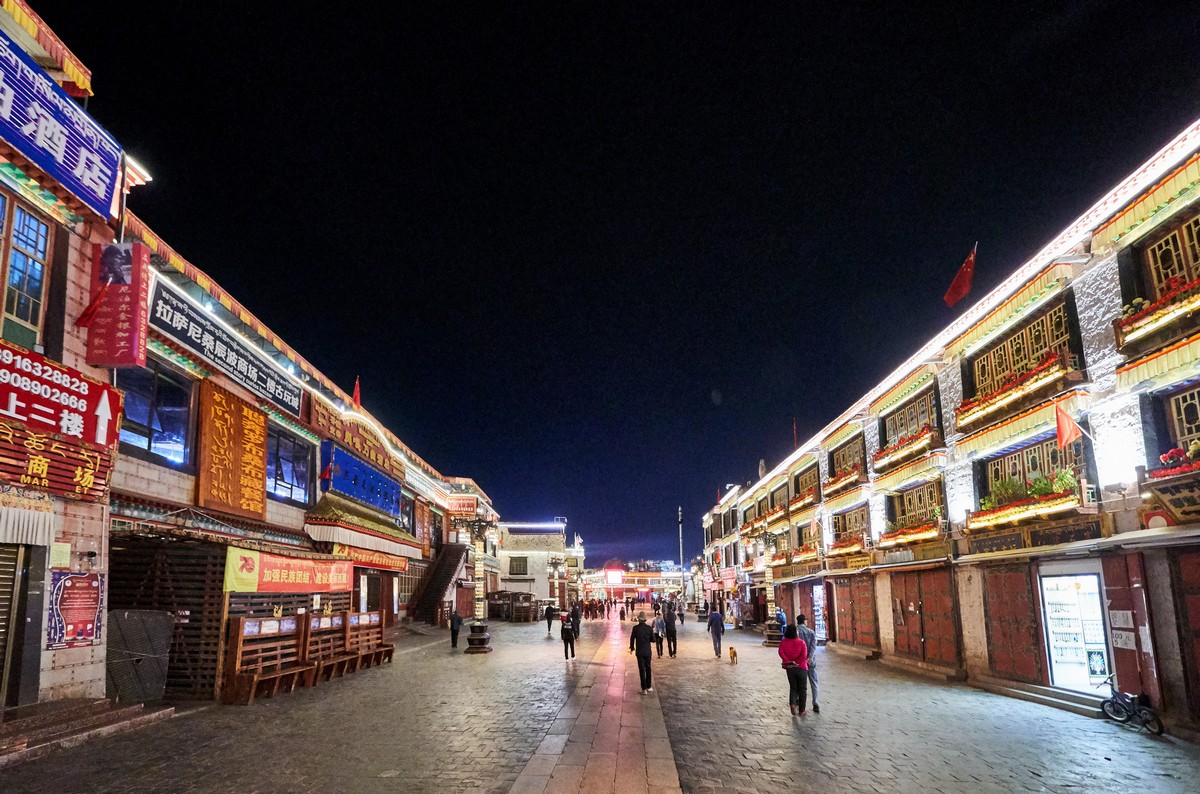 That is part of a Pradakshina path, which encircles the Jokhang monastery-temple. It’s for Buddhists to circumambulate, or – if you’re especially devout – perform prostration along. 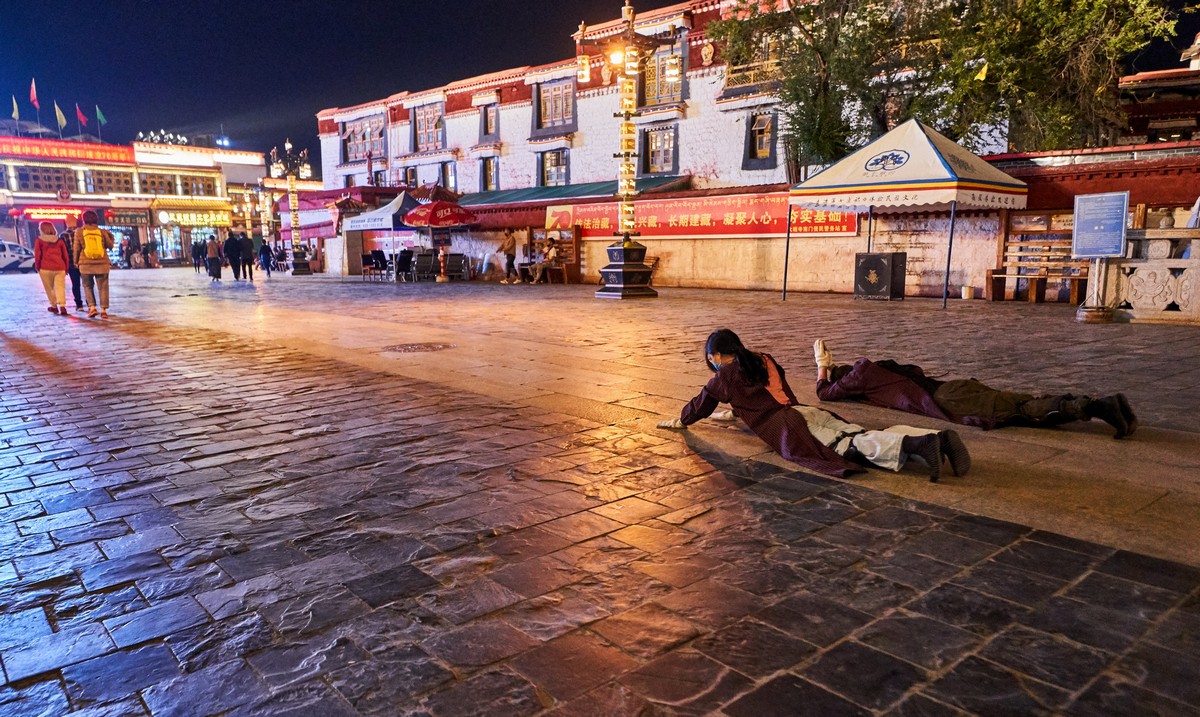 Less strict believers simply pray and meditate in front of the entrance to the temple complex. 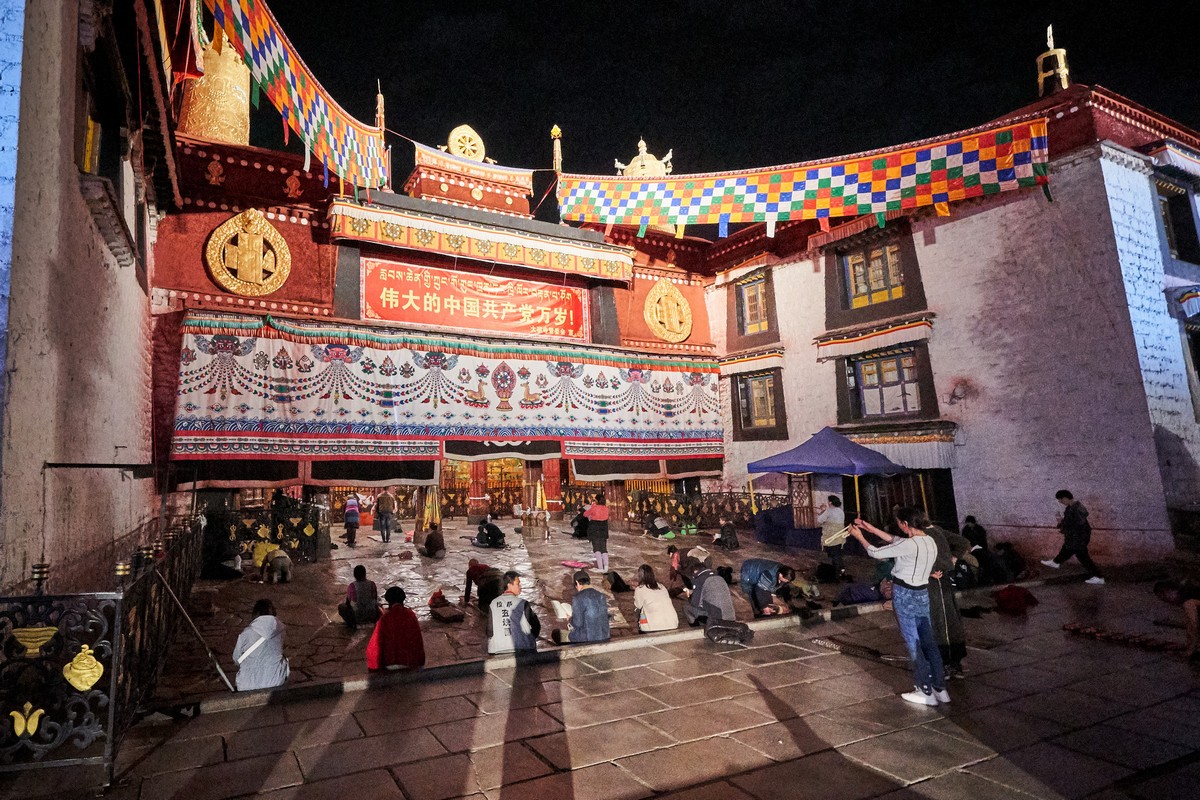 The rest simply stroll around the complex – but always clockwise. 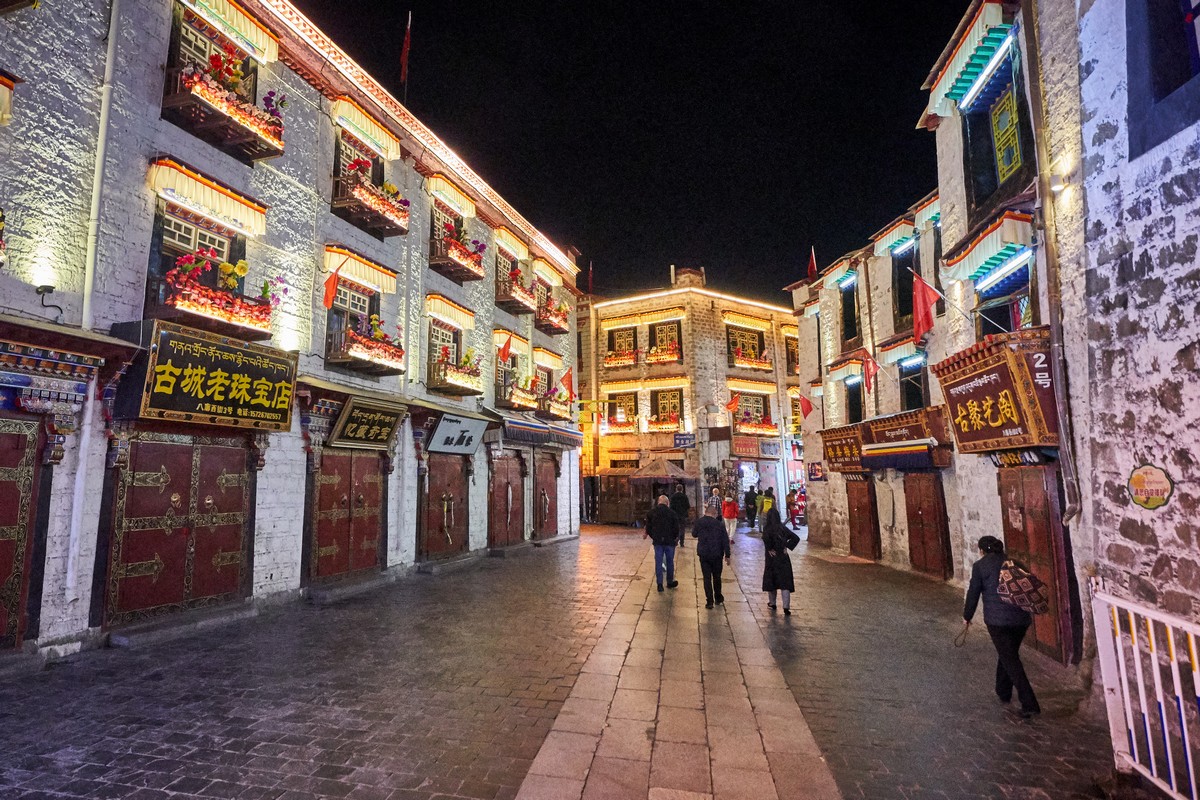 Professional photo-shoots are very popular here, which I didn’t quite expect. Traditional garb is donned, and the clickety-clacking begins…

Notice the polar bear in her arms. Such a shame we didn’t have Midori Kuma with us – he’d have added to the bright colors!

And that was that – our Lhasa walkies completed. The following day we were headed west along our pre-planned expedition route.

The view of Potala from our hotel: 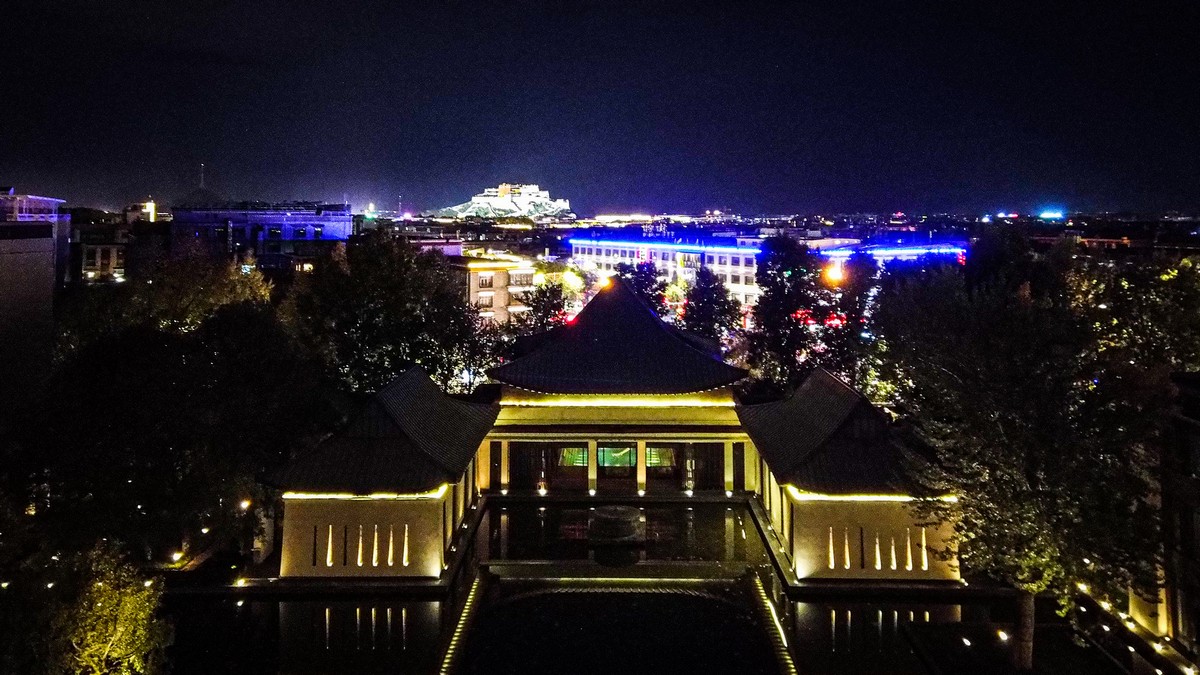 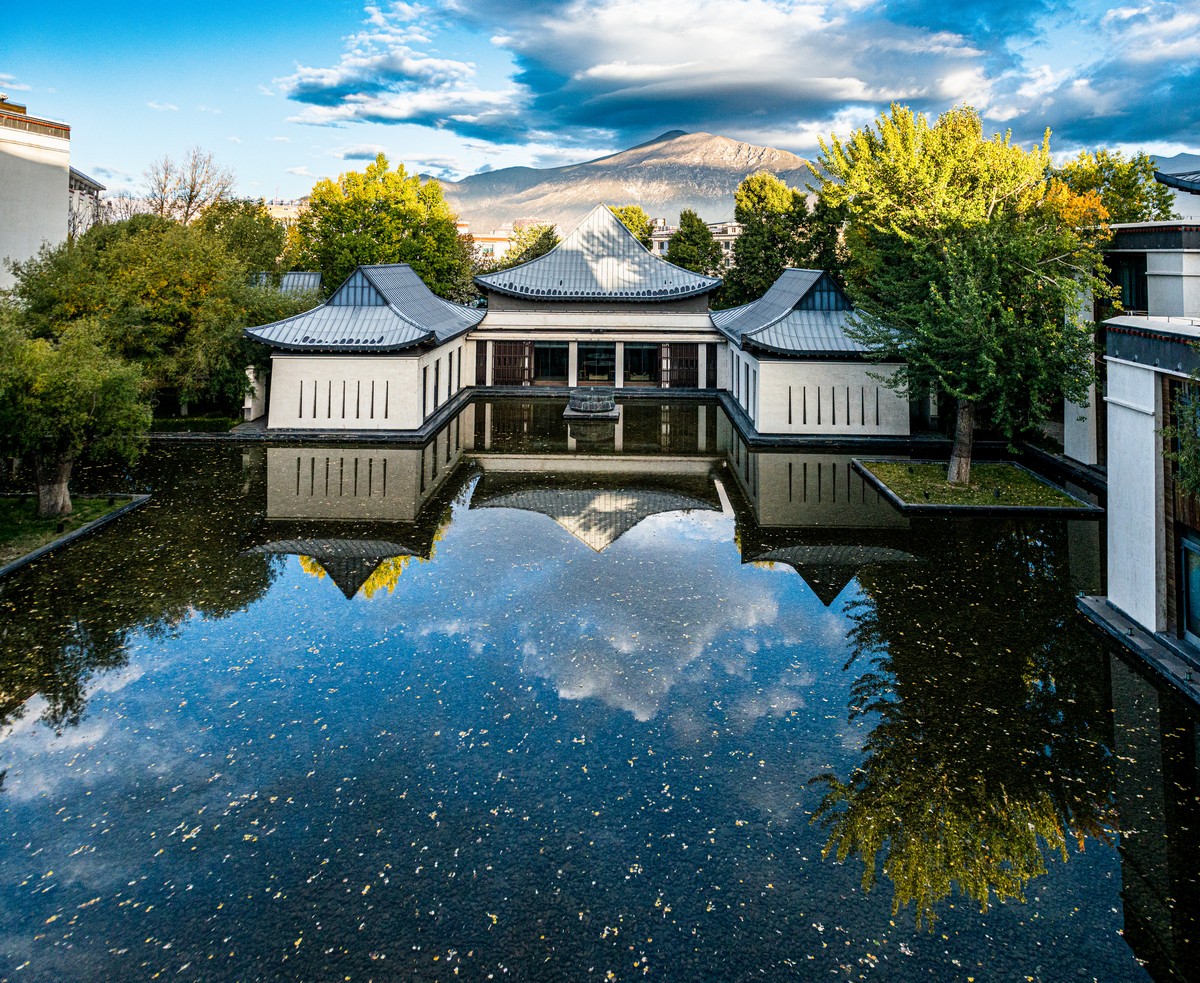