As many of you will know, I have a special list of what are to me the most beautiful – must-see – places on the planet. I call it my Top-100, and it’s updated regularly – here. I haven’t been to all of the places on the list, but I do add checks against some of them often – to put them into the ‘been, seen, snapped, etc.’ sub-category of the list. Just this year I’ve been, seen and snapped: the Galapagos Islands; Lake Baikal; the most beautiful volcanoes in the world (on the Kuril Islands); perhaps the clearest, bluest sky in the world (also – Kurils); the Gobi Desert (hmmm: not on the list, but will be soon after a touch of rearranging/editing:); Baalbek; and the stone miracles of Cappadocia. And just the other week – my newest check against an entry: Potala Palace, Lhasa, Tibet – both day and night, no less. 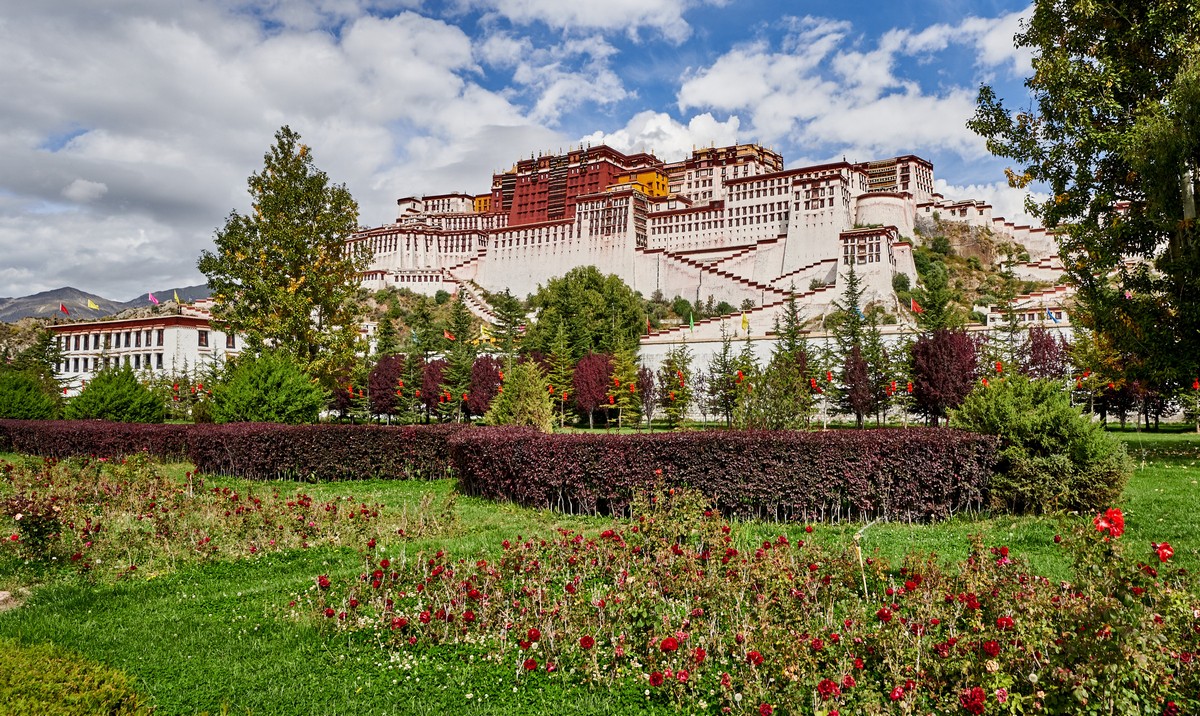 This palace is the main residence of none other than the Dalai Lama. Actually – his former residence. In fact, the story about who lives here – or should – and of the non-too transparent details of the Panchen Lama and other mysteries – I won’t go into it all here. It’s quite a controversial topic and I know precious little of it, so I’m hardly going to wade into it on these here blog pages. No, instead – as per – my tales and pics here will be of the beautiful sights to be seen, some curious historical facts, and other positive tidbits. 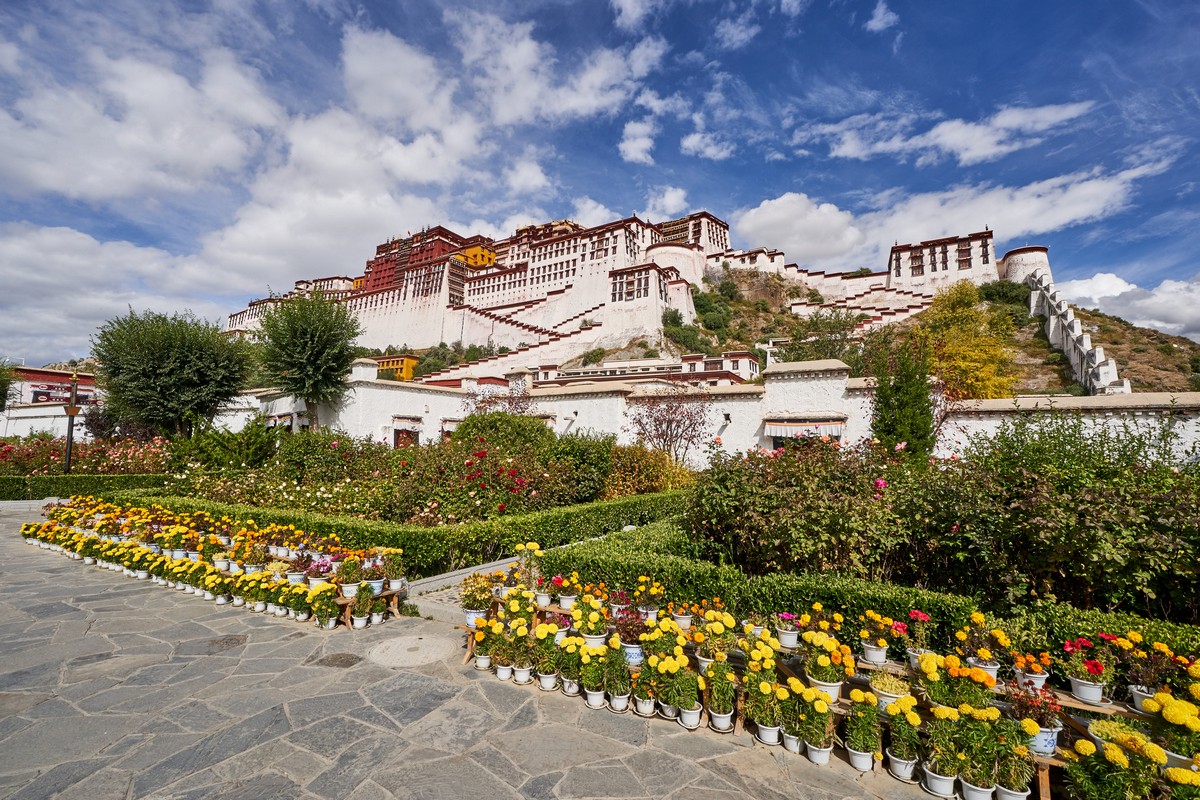 One of the things that surprised me most about the Potala Palace is that its current incarnation – give or take the odd repairs here and there – only dates back to between 1645 and 1690; that is – a ‘mere’ 320-370 years ago (previous incarnations date back to ~the beginning of time, as is to be expected in this part of the world). So that makes it 200 years younger than Moscow’s Kremlin; still – it’s no less impressive for its relatively junior years. 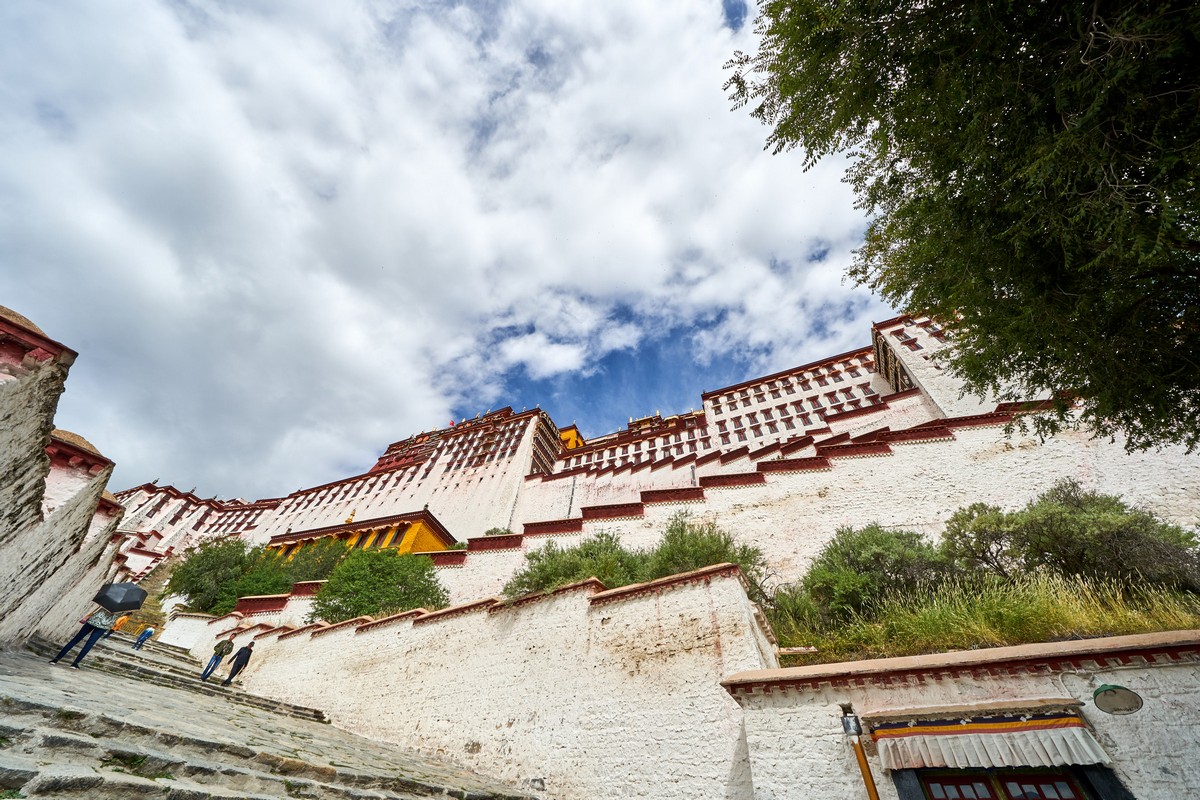 Time we had a closer look… 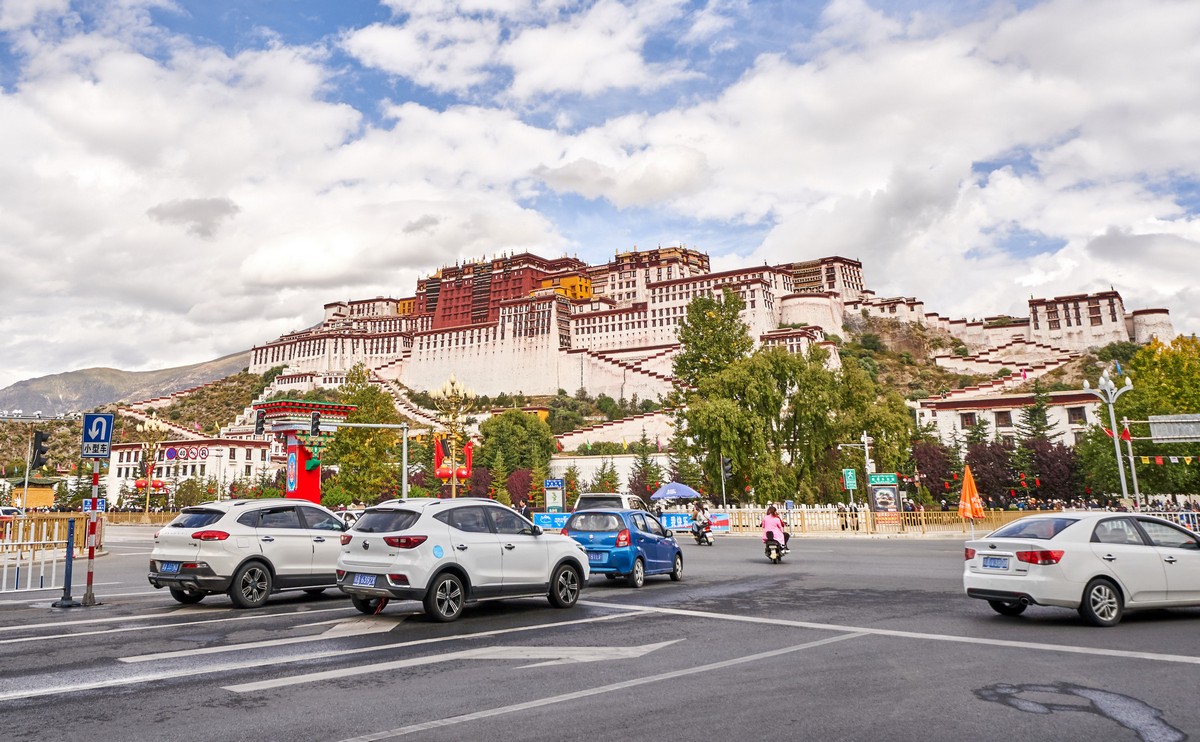 We were told how the view of the palace from this particular spot is perhaps the best. Well, yes – but the cars spoil it a bit ). 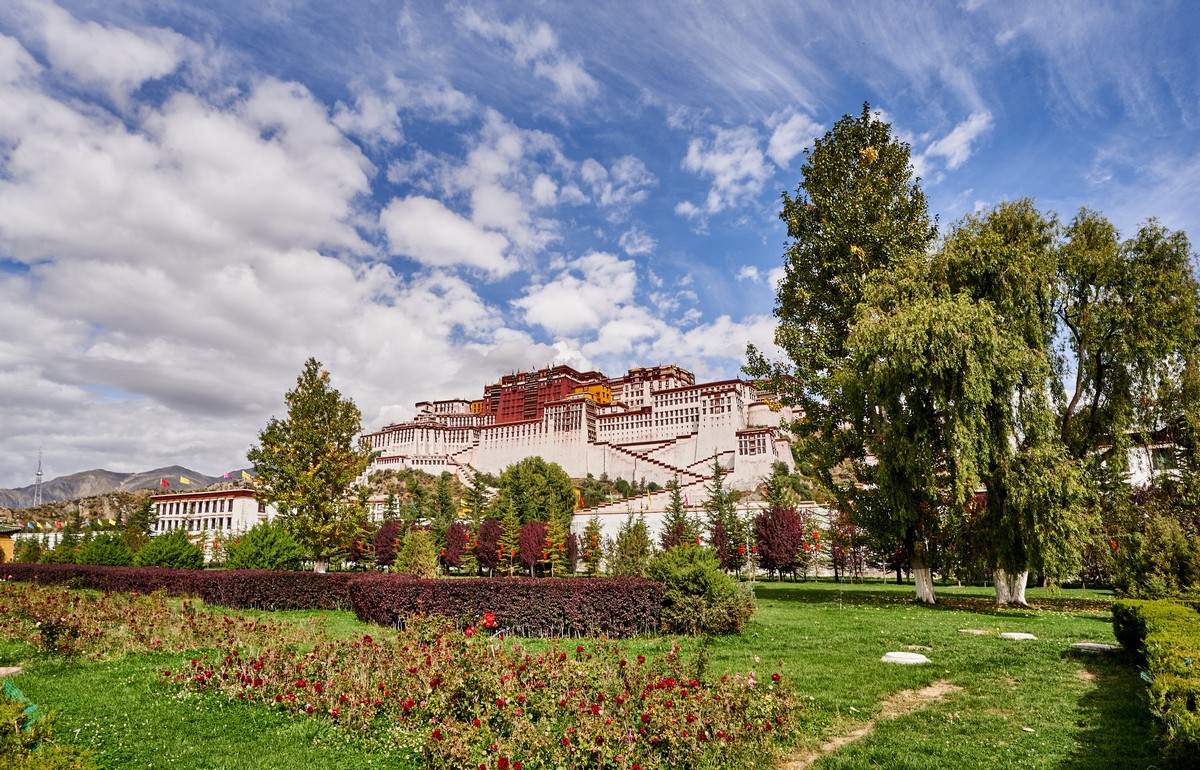 We move away from the road… Hmmm. Now trees are in the way!

We move away from the trees – darn advertising boards in the way! 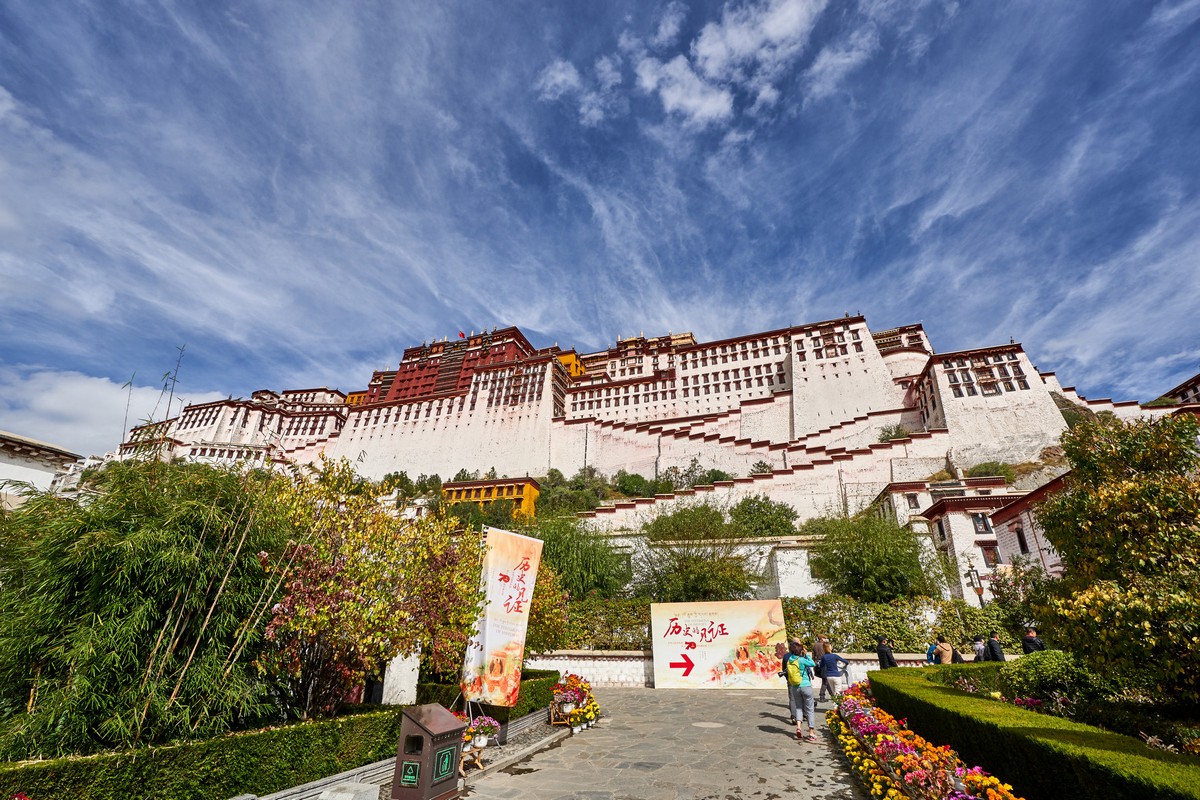 Oh well; such is the Lhasa reality, which is what we came for ).

Anyway, not to worry – we’re off up there… 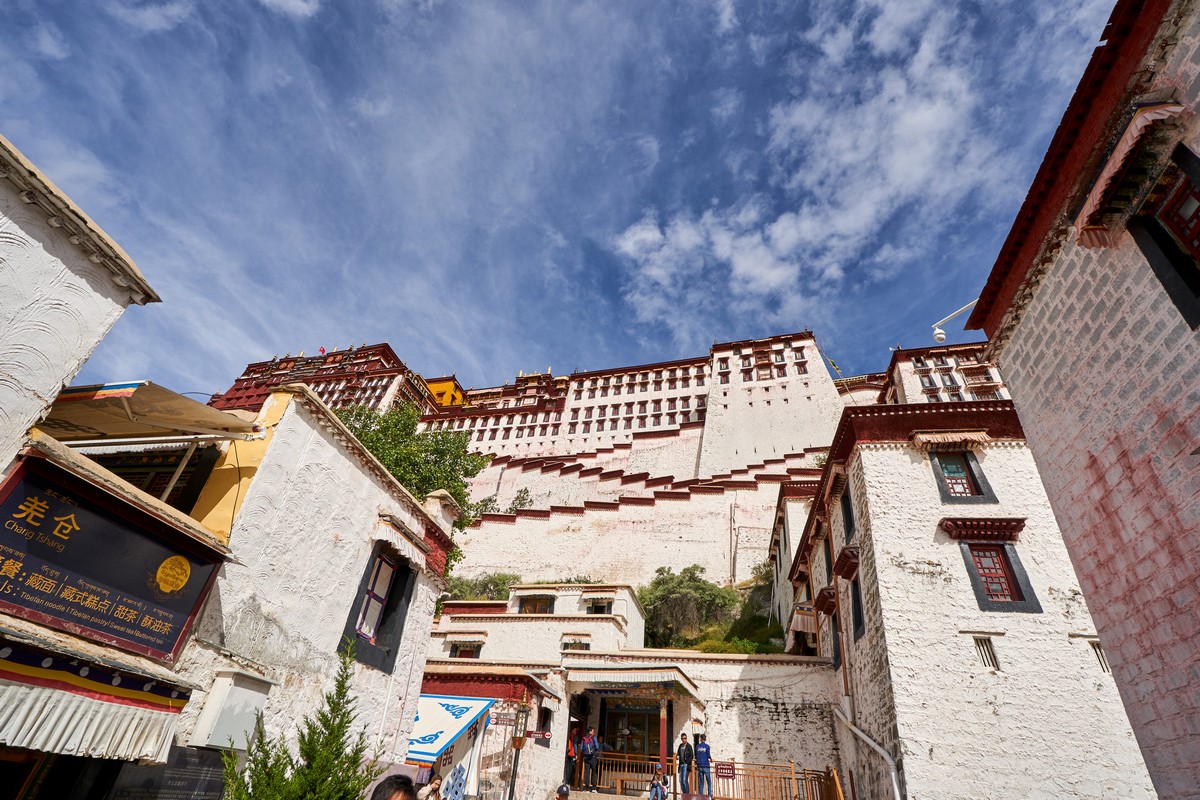 …Up those steps. Let me remind you that Lhasa is 3600 meters above sea level. And since we hadn’t been long up in altitudes such as this, the going was real tough: we had to take it easy and stop for breathers often. 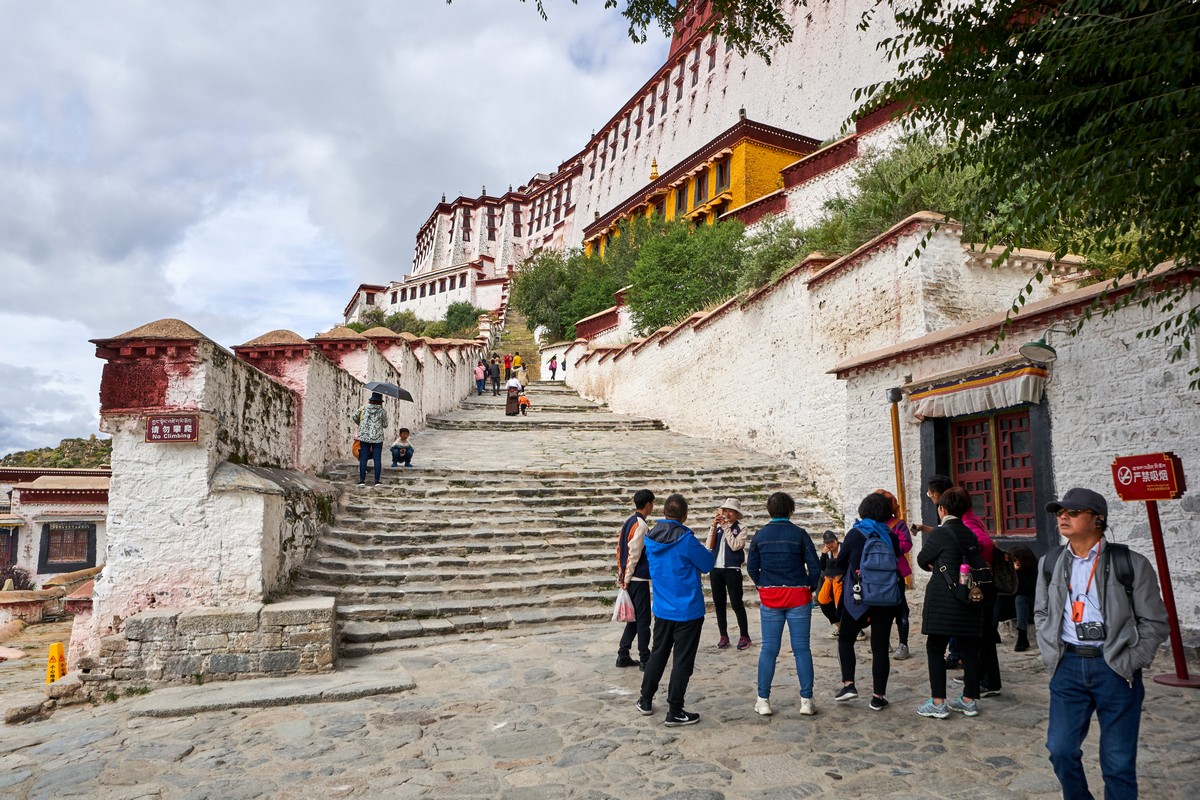 The Dalai Lama would take a horse up to the top. And so he could easily get up onto the horse, that there platform with the steps is for just that purpose. So it’s there not just… because; it’s there as a technical-logistical necessity. 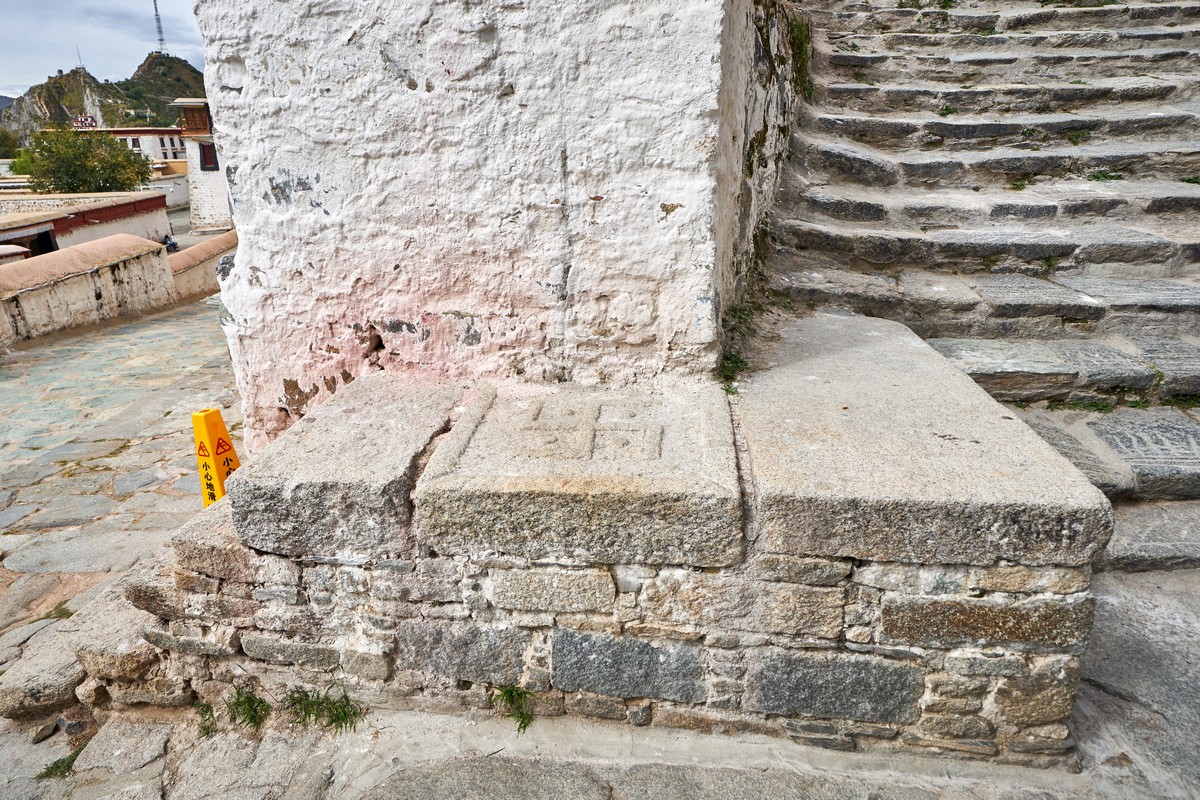 No horses were available for hire for mere mortals tourists, so we had to walk…

Main thing – take your time; breathe deeply; don’t bend down, squat. Altitude sickness needs to be avoided at all costs: a most unpleasant thing.

We make it to the top! Here’s the view of Lhasa -> 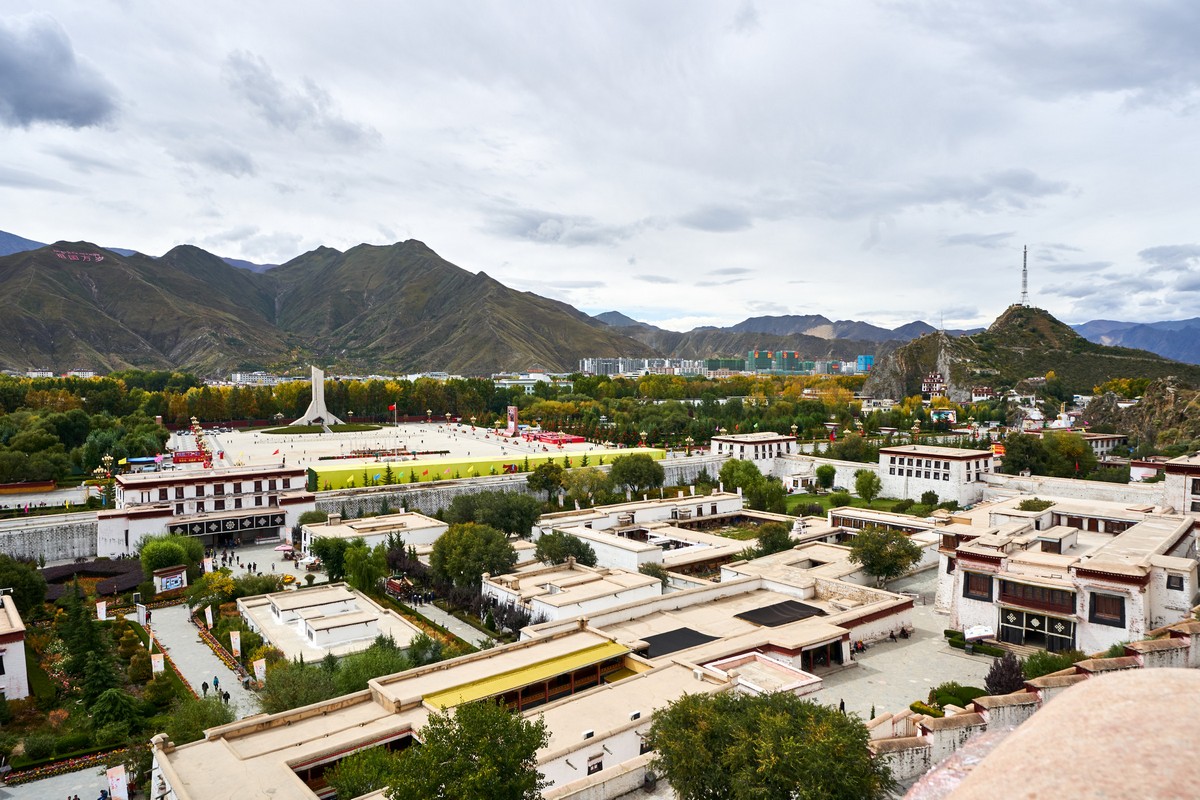 The walls of the white palace -> 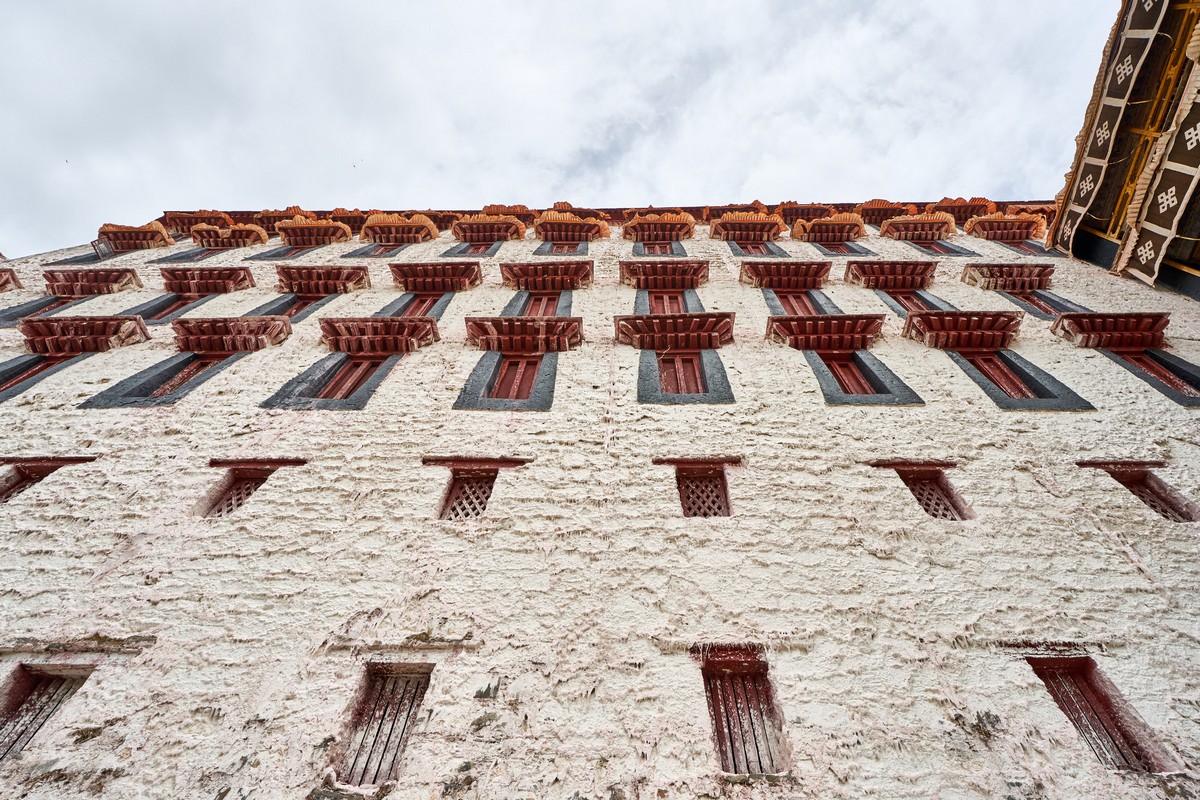 In we go. Here we’re still allowed to take photos.

…To an upper courtyard: 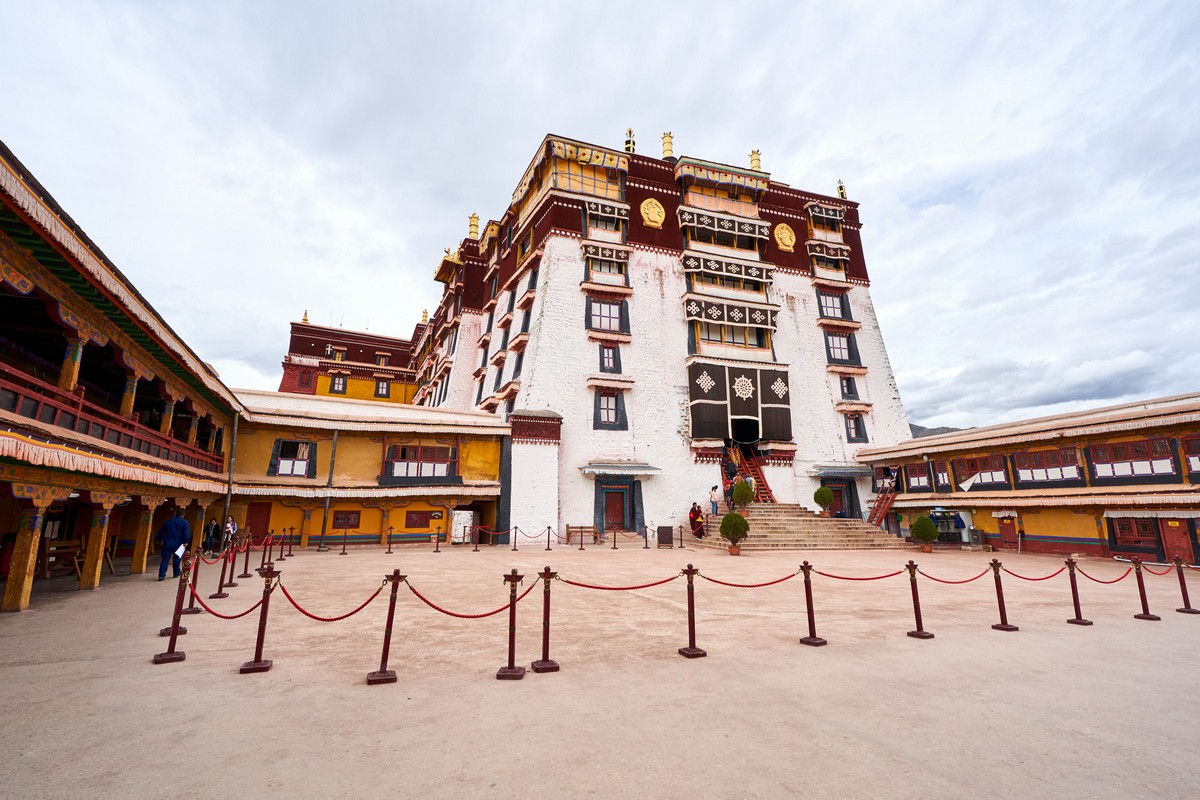 Tourist info – a rarity, but when it does show itself, handily, it’s in Tibetan, Chinese and English: 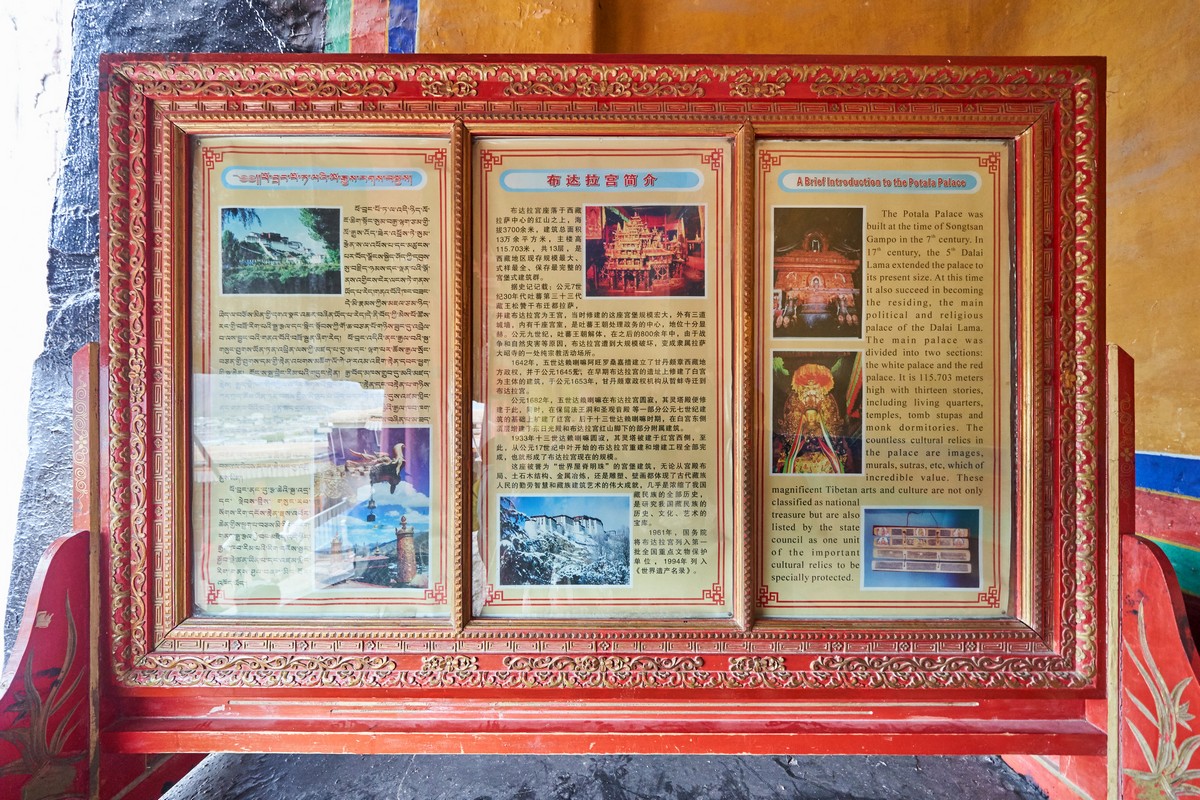 Alas – no photos from here. Shame – for ahead there are grand halls, Buddhas, thousands of rooms, the living quarters of the Dalai Lama and monks, and more. You’ll have to find such pics and info on the internet, folks.

Later, we head to the exit…

The view of the city again: 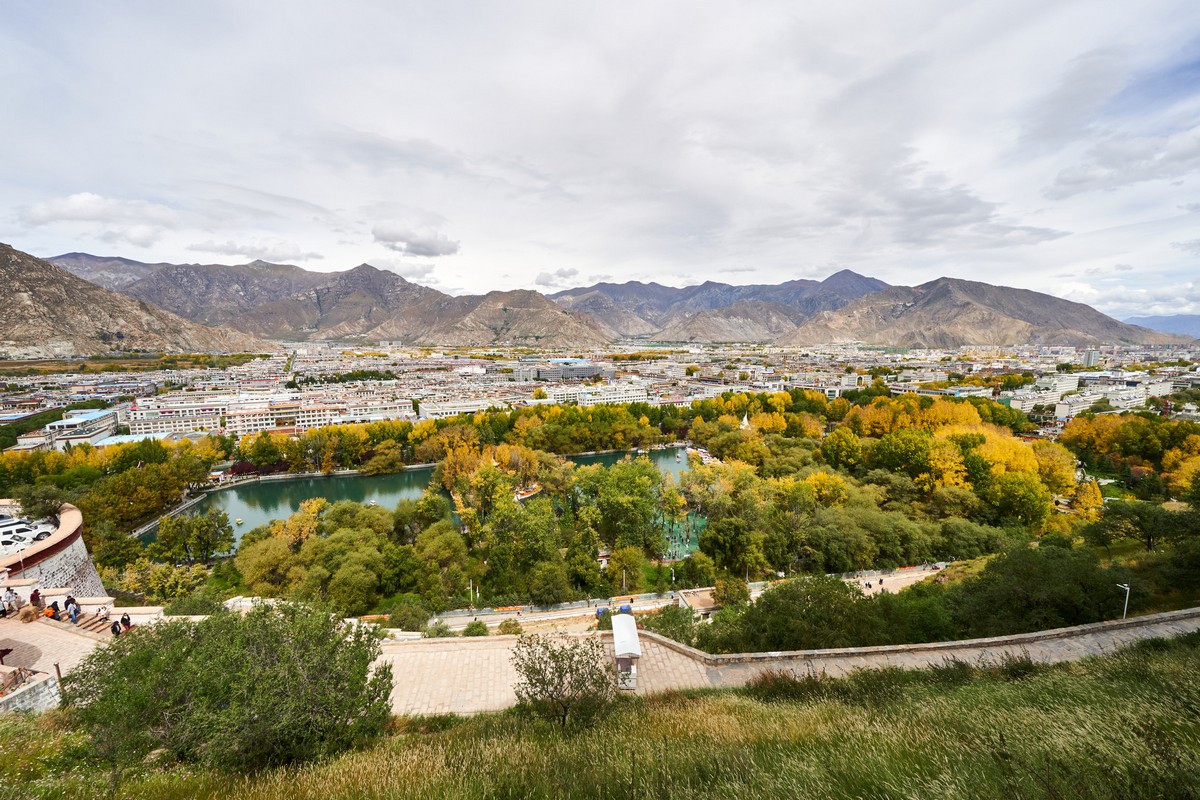 Half-way back down – the view of Potala from the side: 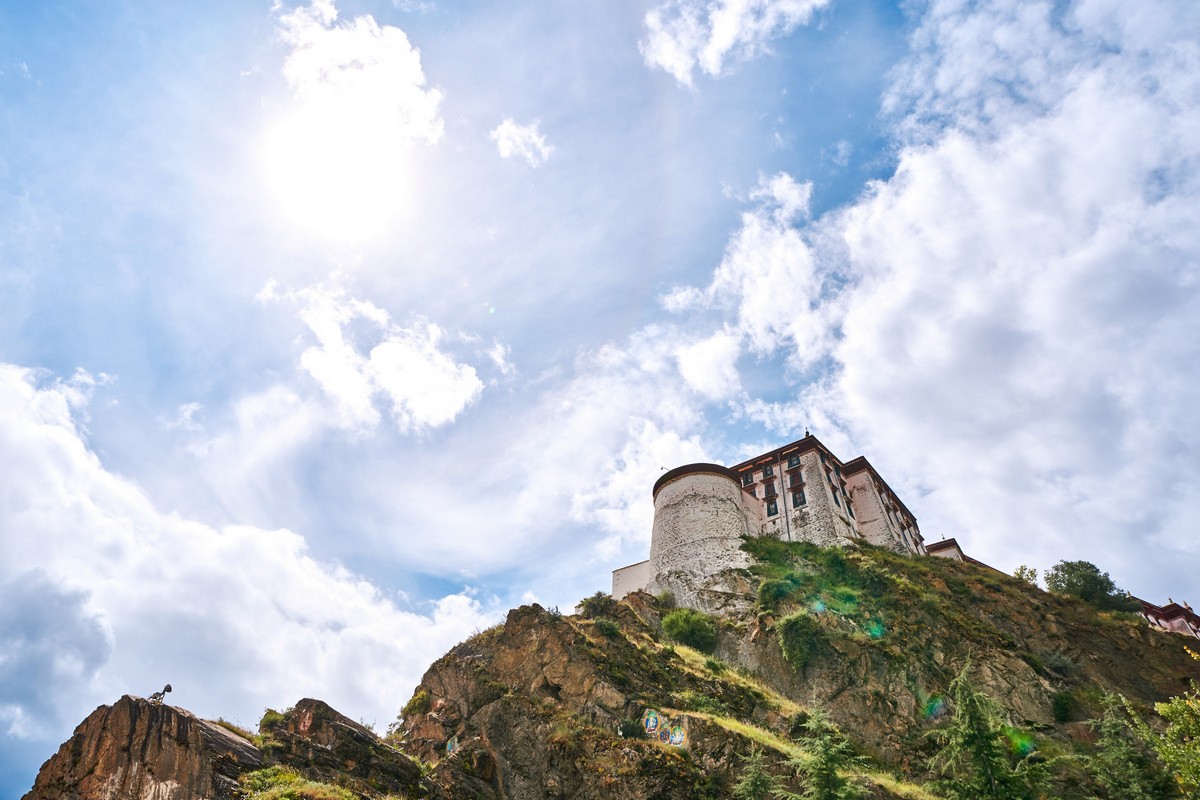 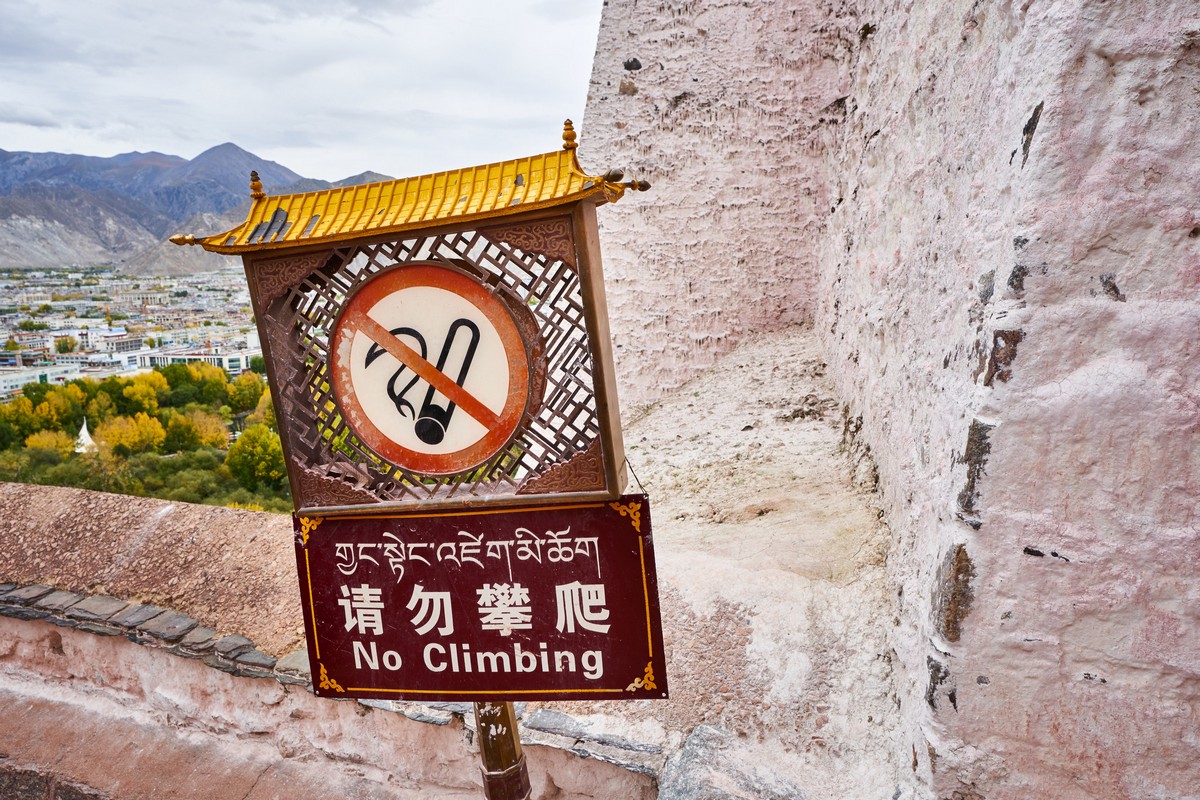 At the exit – souvenir shop. Well, why not? No one said Buddhists can’t earn a buck selling trinkets? Like this ‘trinket’ ) -> 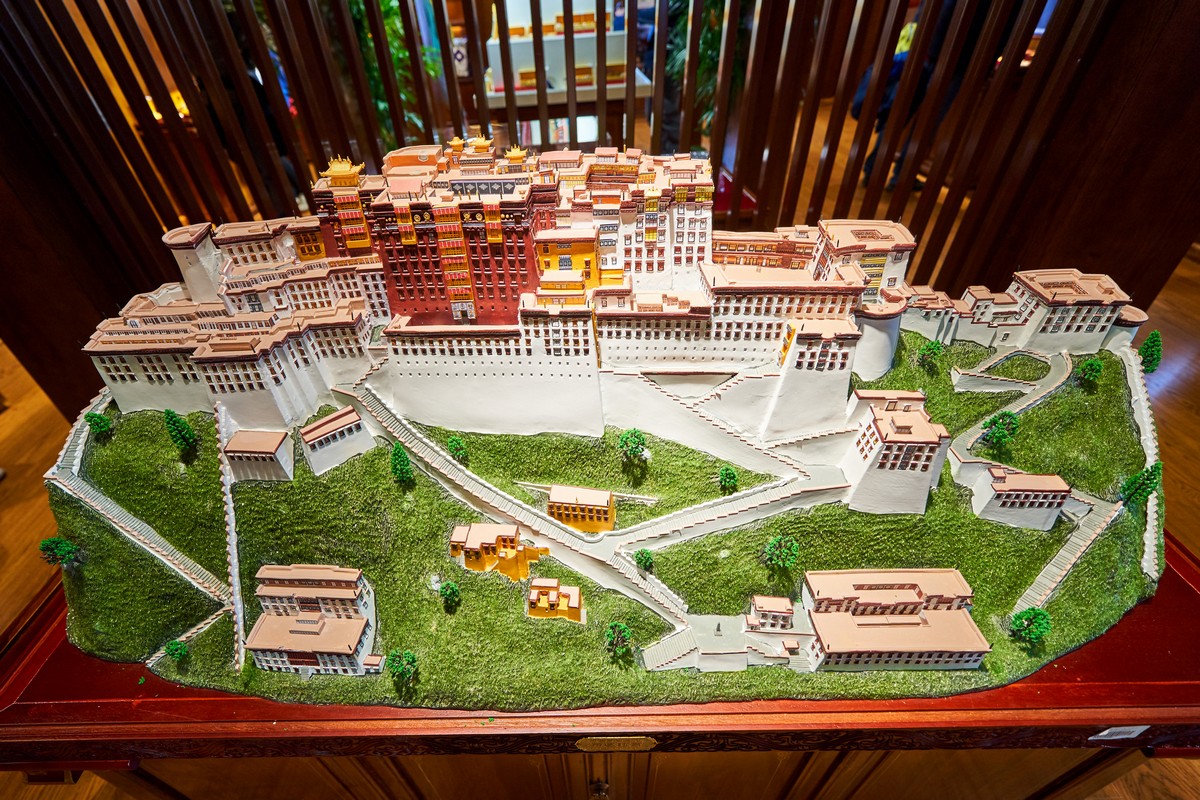 Nighttime – just as grandiose, but in a different way:

Recently it was the 70th anniversary of the Chinese republic. Indications thereof still abound: 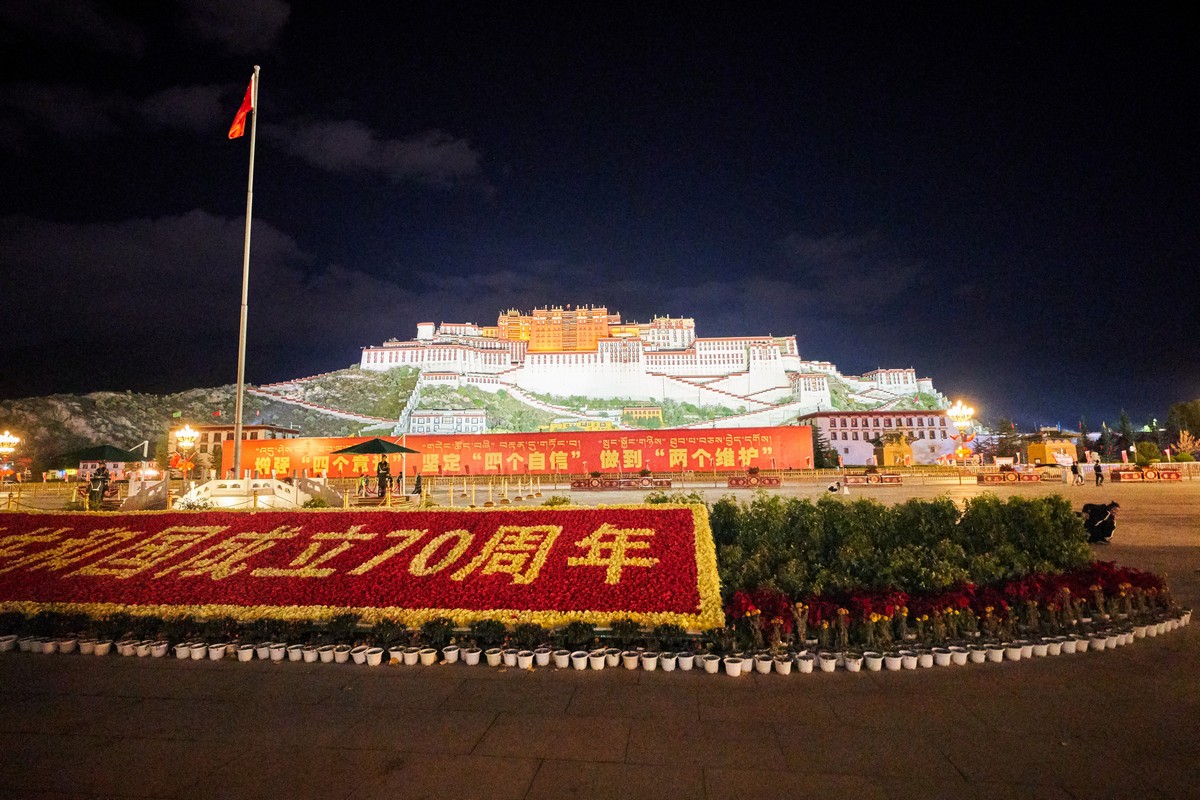 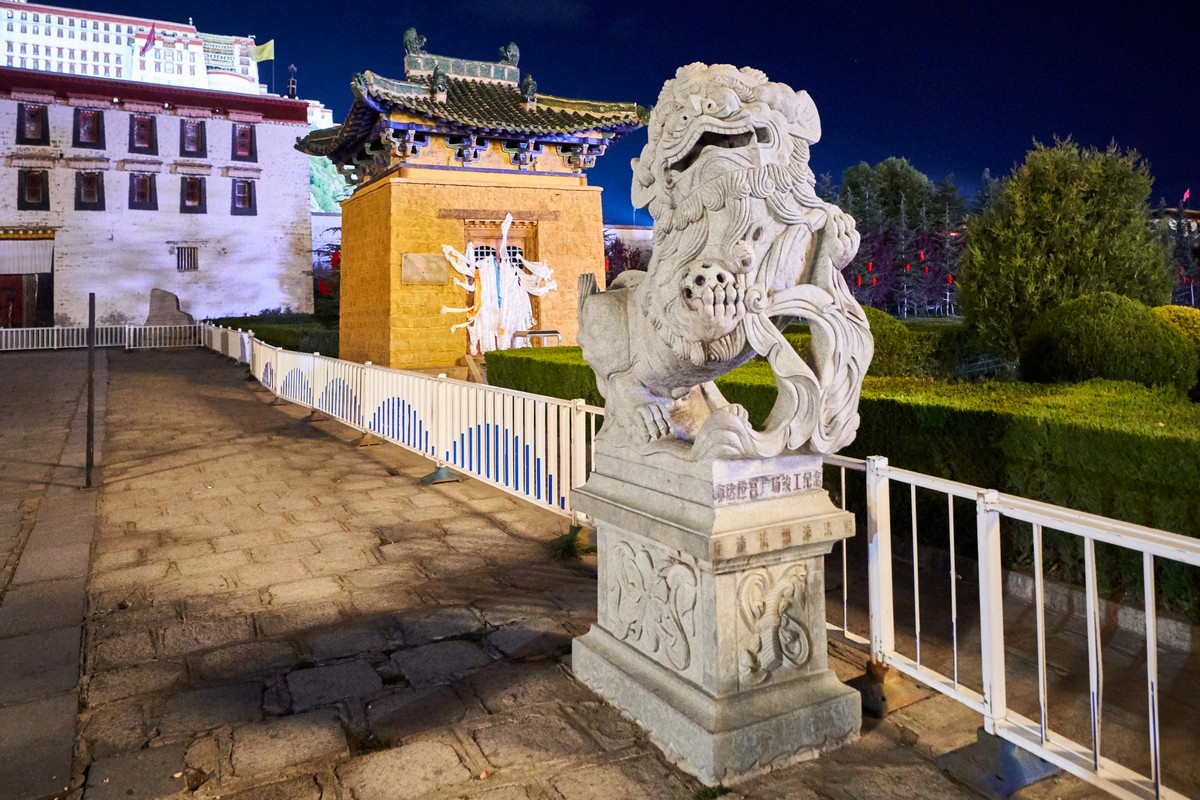 Grrr – another photo-op (of the female – with the lion cub in her hand) bombed by some completely unnecessary bright red tent! 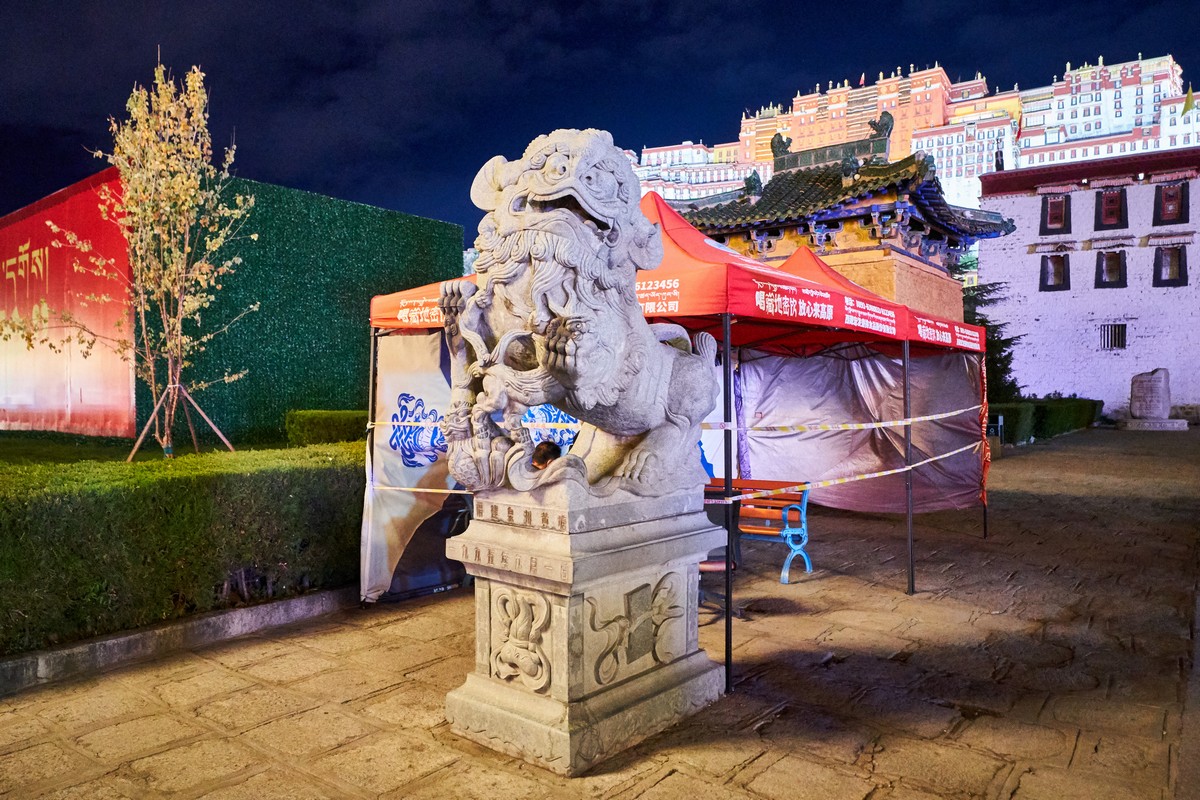 As per, a few dozen pics from photo-maestro DZ. Here he is ‘at work’: 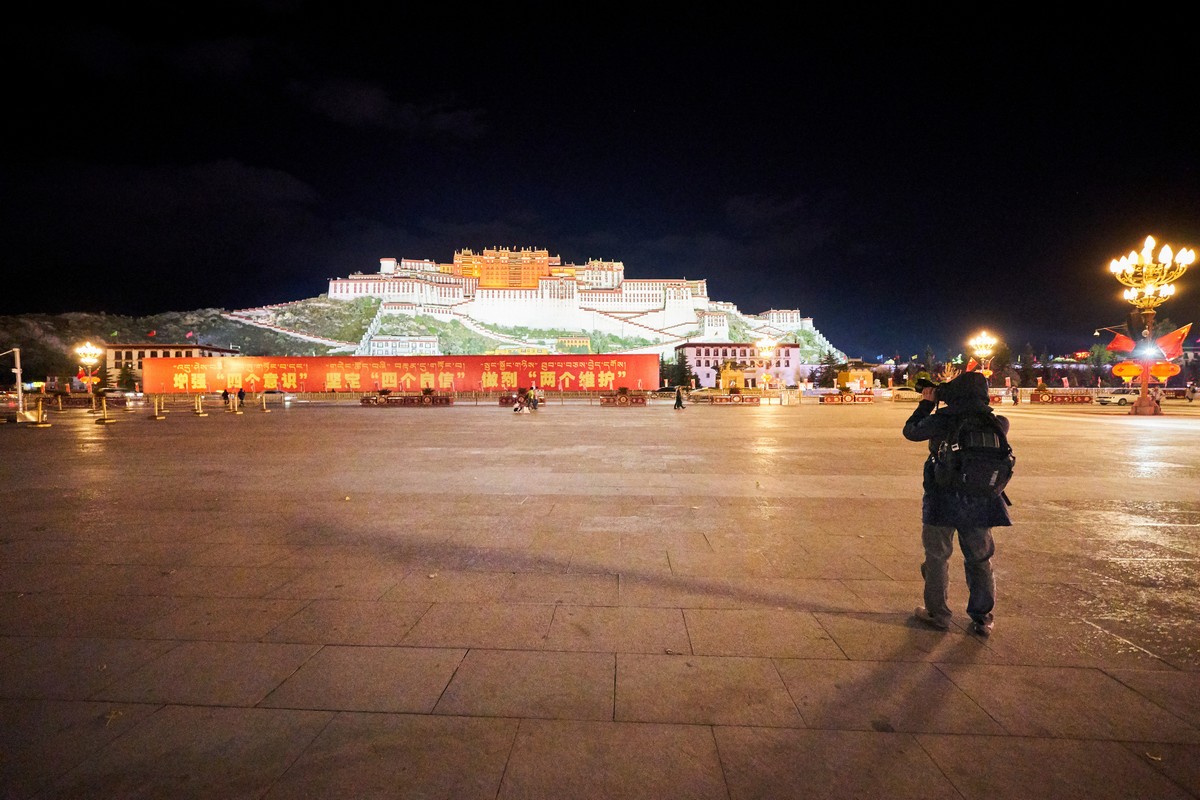 The view from our hotel:

Btw: at midnight they turn off the palace’s lighting. Quite the spectacle from a roof-top bar: Now you see Potala – now you don’t!