So its farewell Lhasa, and time to head out west toward Shigatse, Tibet’s second largest city. We were up at the crack of dawn so as to get as much sightseeing in as possible. We piled into a Ford Transit with all our bags and off we shot.

Now, on this Tibetan holiday we wanted to see a much of the country as possible – as per our usual modus operandi. However, there were three must-sees that we considered mandatory; anything else would have been a welcome bonus. The three must-sees were: (i) Lhasa (done); (ii) a view of Everest from the northern (Chinese) side; and (iii) Mount Kailash (including a trek around it). Those were the three main-course dishes we just had to eat; anything else would be bonus side dishes, which in the end turned out to be massive portions that really could have passed for a main course ). But more on those later. We’ll come to those when we come to them – in chronological order of how we encountered them.

Now a few words about the journey…

It wasn’t going to be a short one. It was around two thousand kilometers long! Still, at least the roads were of a good standard. They weren’t an autobahn by far, but still not bad. So we had several days ahead of 300-350km per day on the road, which took five to seven hours each day. Every day featured plenty of inspections of natural beauty plus the inevitable Buddhist temples and monasteries. But, oh, were the days looooong. Up every day at the crack, quick breakfast, cracking on along the roads all day, and reaching our hotel for the night late in the evening (sometimes too late for dinner). And like that every day. Oof!

Such a punishing daily schedule was real tough, but the surrounding scenery made up for it: see for yourself, in the following ‘small’ photo-video selection from the first days of our road trip:

Practically every one of those pics could be framed and take pride of place on the wall. But that’s only the beginning! Popcorn, beverage, nachos-and-cheese-dip at the ready – for there’s going to be a lot more masterpieces like those, and a lot of tales to be told to…

The first stop on our road trip was on the shore of the Tibetan holy river Yarlung Zangbo, the upper stream of the Brahmaputra River, aka the Matsang River. 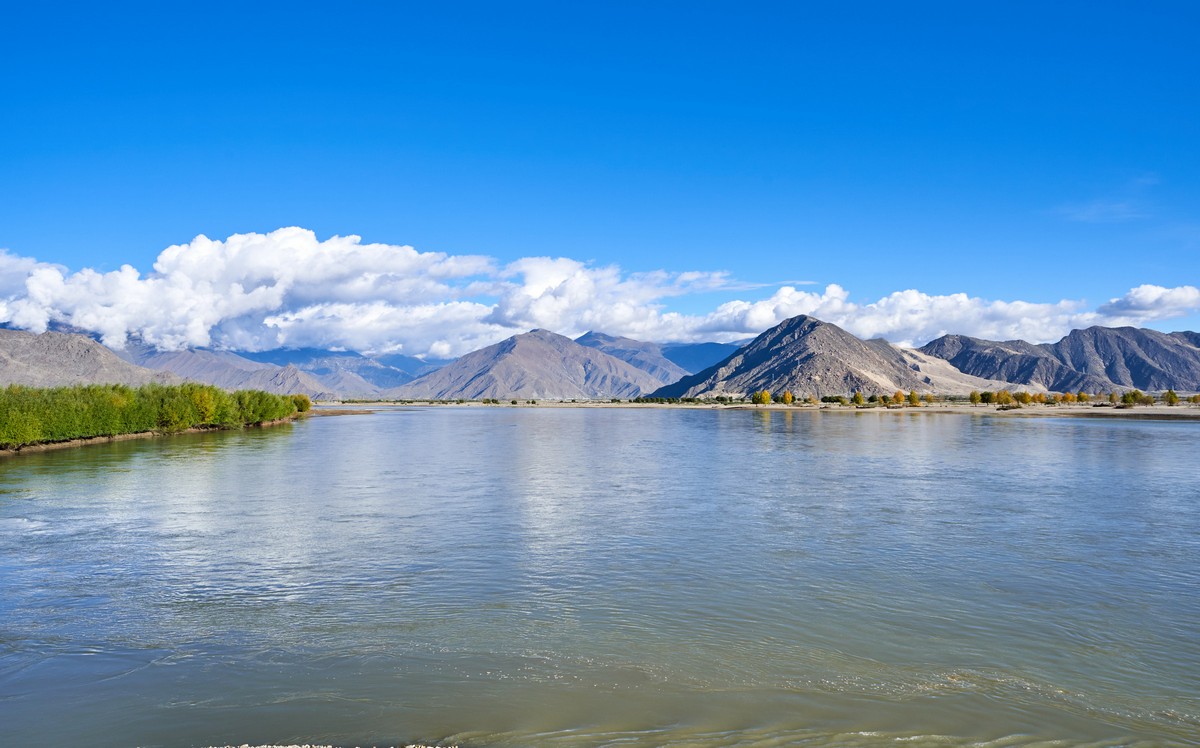 While glancing at the river’s strong currents, I wondered: what ocean does it flow into? After all, those strong currents were heading east… but there are only Tibetan mountains to the east! To the north there are mountains too, and to the south – the Himalayas! Well, it turns out it does a 90-degree left turn after a while – i.e., turns south – and flows into the Ganges, which in turn flows into the Bay of Bengal. Thus, it crosses the Himalayas! (Indeed it ‘rises in the western Himalayas in the Indian state of Uttarakhand, and flows south and east through the Gangetic Plain of India and Bangladesh, eventually emptying into the Bay of Bengal’ – Wikipedia)!

Hmmm. That must mean it’s good for whitewater rafting, and a quick look at Wiki confirms this. And it’s 5th-category rafting too – i.e., the most extreme! Note to self: next time take a raft, not a Transit van? )

Now, what was it our guide was telling us about this river? It’s been a while since and… I can’t quite remember it all. I really should write things down at the time. But where am I going to find the will and strength to do that?! Well, today, I’ll just have to rely on my fading memories…

The name of the river around these parts isn’t Matsang, or Brahmaputra (that’s in India), but something else meaning something positive about horses! Peering at the rushing water, our guide also told how in ancient times funerals were either heavenly (for those worthy of such a thing) or river-based (for everyone else). The deceased would be cut up into pieces and carried up to the top of the nearest mountain – that’s the heavenly funeral: a favorite with the birds. River funerals, of course – were the preferred sending-off for fish. 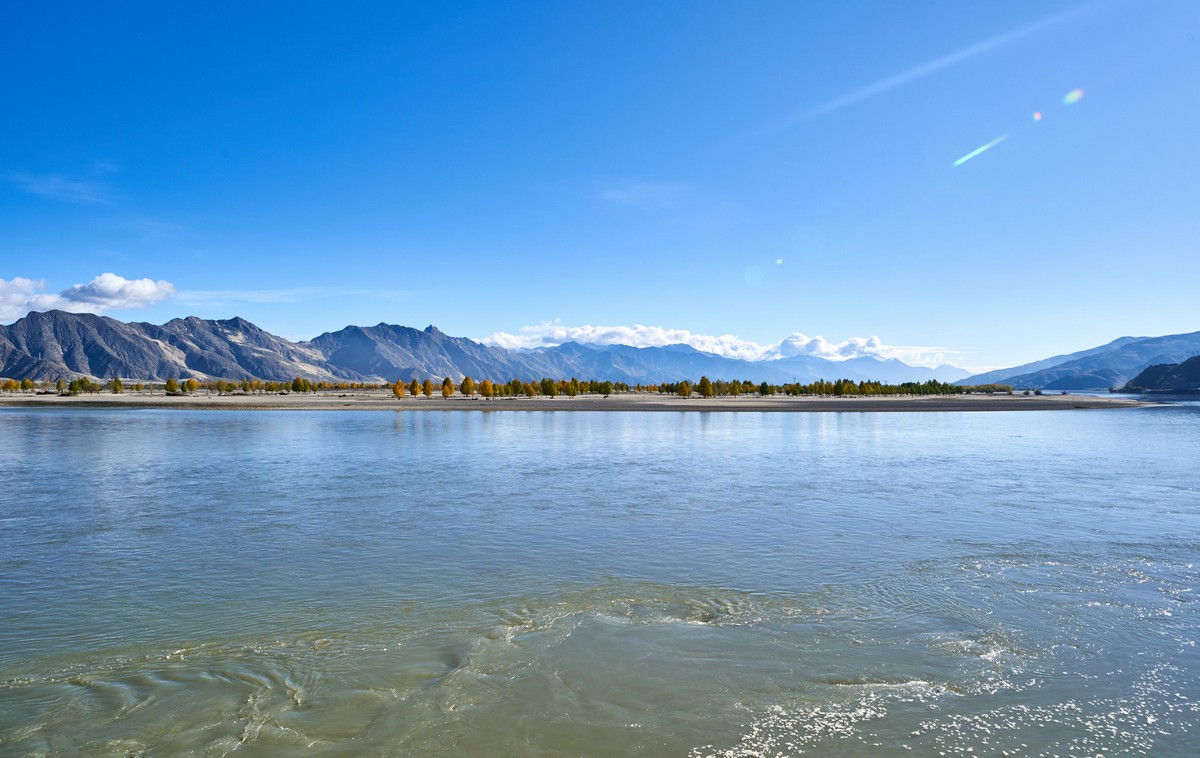 Not sure where the above two pics were taken, or the next one, and it’s troubling me… 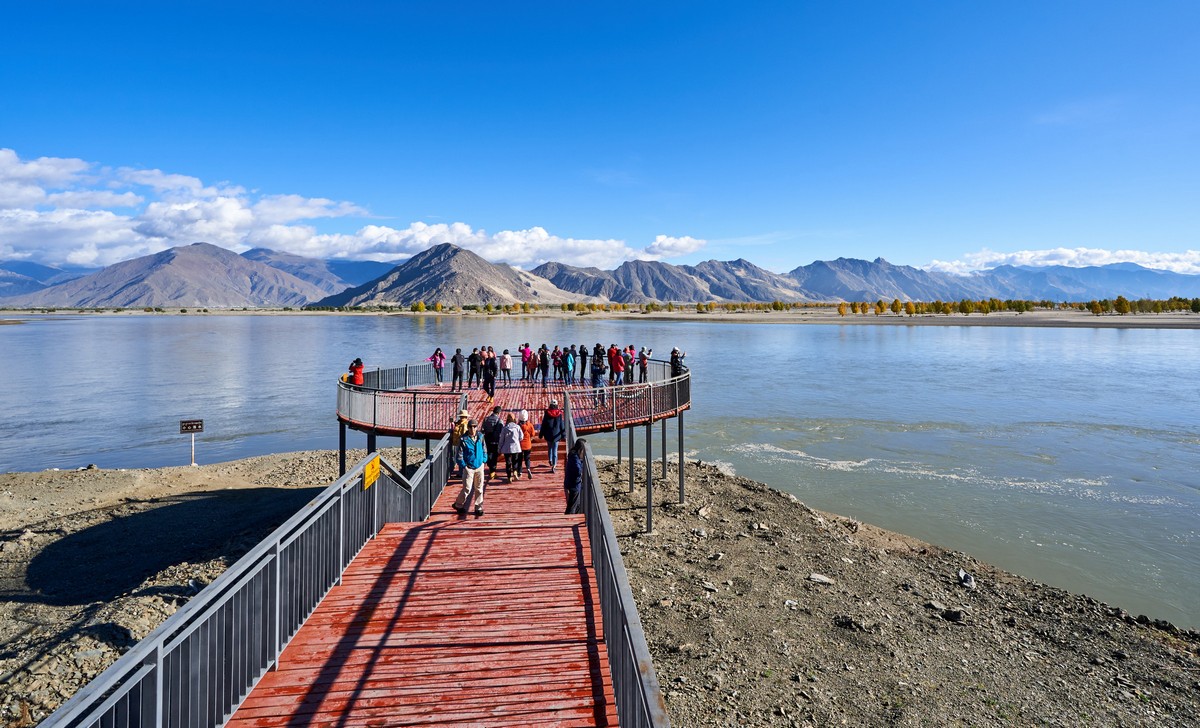 We drove from Lhasa in the direction of Yamdrok Lake along this route. So, like, where could we have seen the above scenes? The photo was clearly taken in the morning – shadows are to the left, meaning east is to the right. The river is flowing eastward, so it’s the Matsang for sure. On D.Z.’s photos to the right on the river back there’s a monastery, and opposite are some electricity pylons!

Aha – found it! Here’s the monastery, and here’s the viewing platform. Phew. Btw: Yandex Maps – much better than Google Maps in this part of the world, which often gets things very wrong.

All was fine and dandy driving along our seemingly endless route, but then we took a left and the road started to zigzag to reduce the gradient – clearly a sign the ascent was a sharp one. Accordingly, before we knew it we were suddenly 4800 meters above sea level (at a mountain passage called Kamba La), but we’d only been acclimatizing for two days! Our brief walkies up there were very uncomfortable, to say the least. Still, the view of Yamdrok Lake was breathtaking. Such colors!… 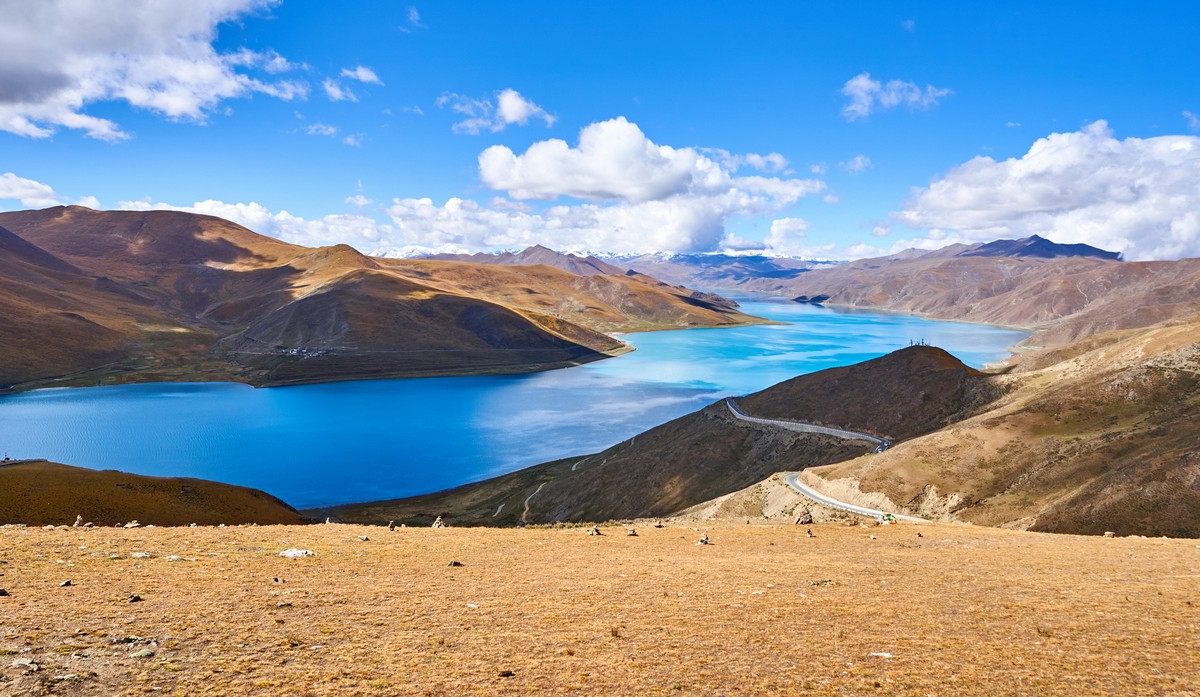 And the view of the Matsang behind us – also marvelous:

Some kind of technical installation up the top there also looking good; it’s probably 5000 meters above sea level! 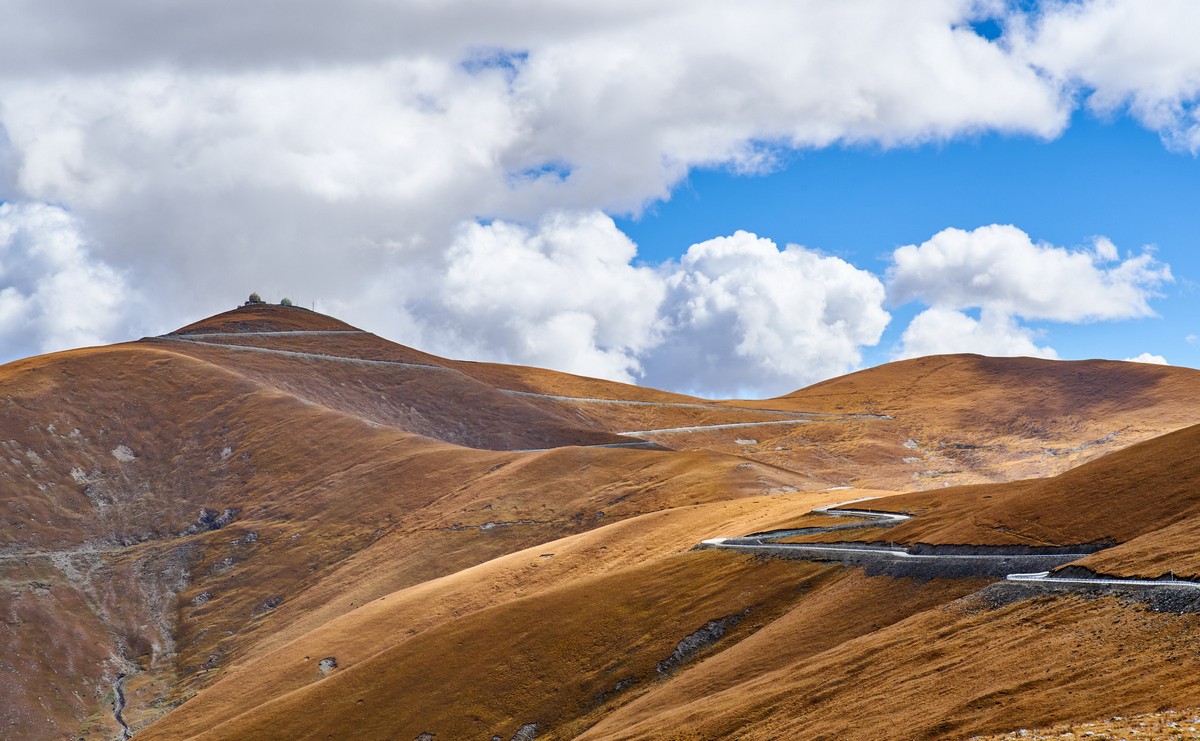 But the lake – oh my gaudy!

The map here – not what you see normally: the key featuring ‘Oxygen Chamber’! It’s the equivalent of ‘first aid’ up here, just in case folks become poorly because of the thin air. 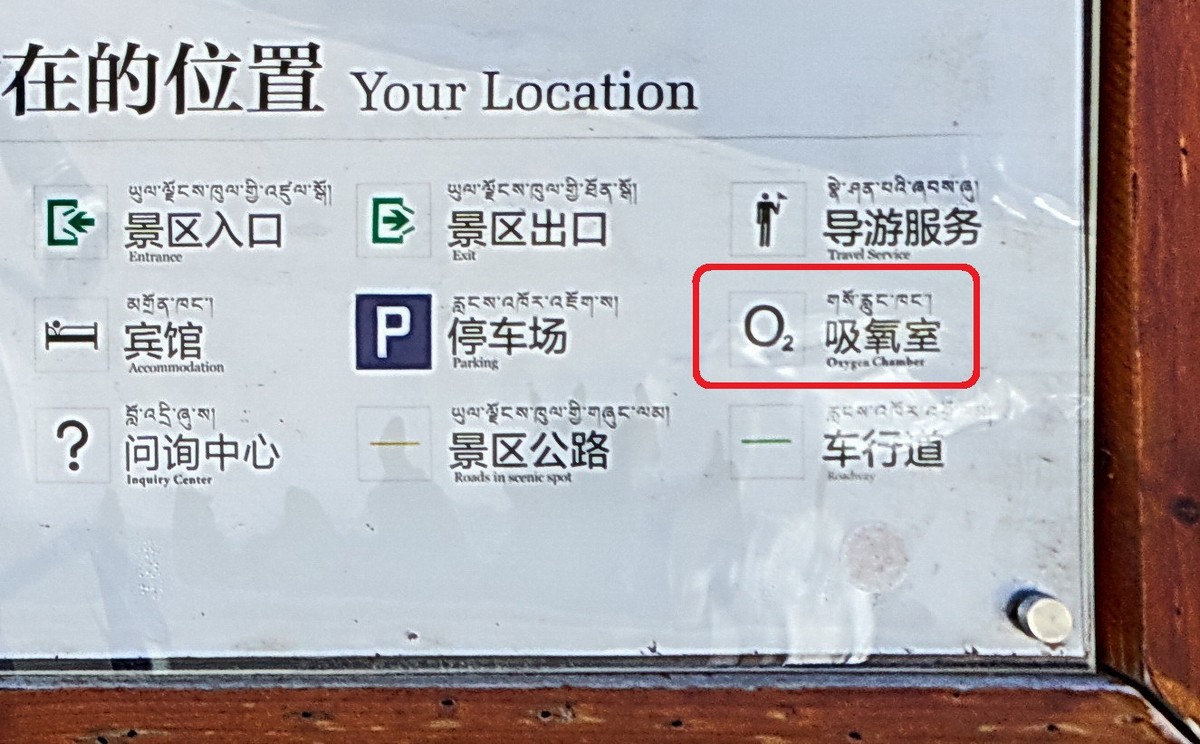 Next, we were to take that road there down to the lake: 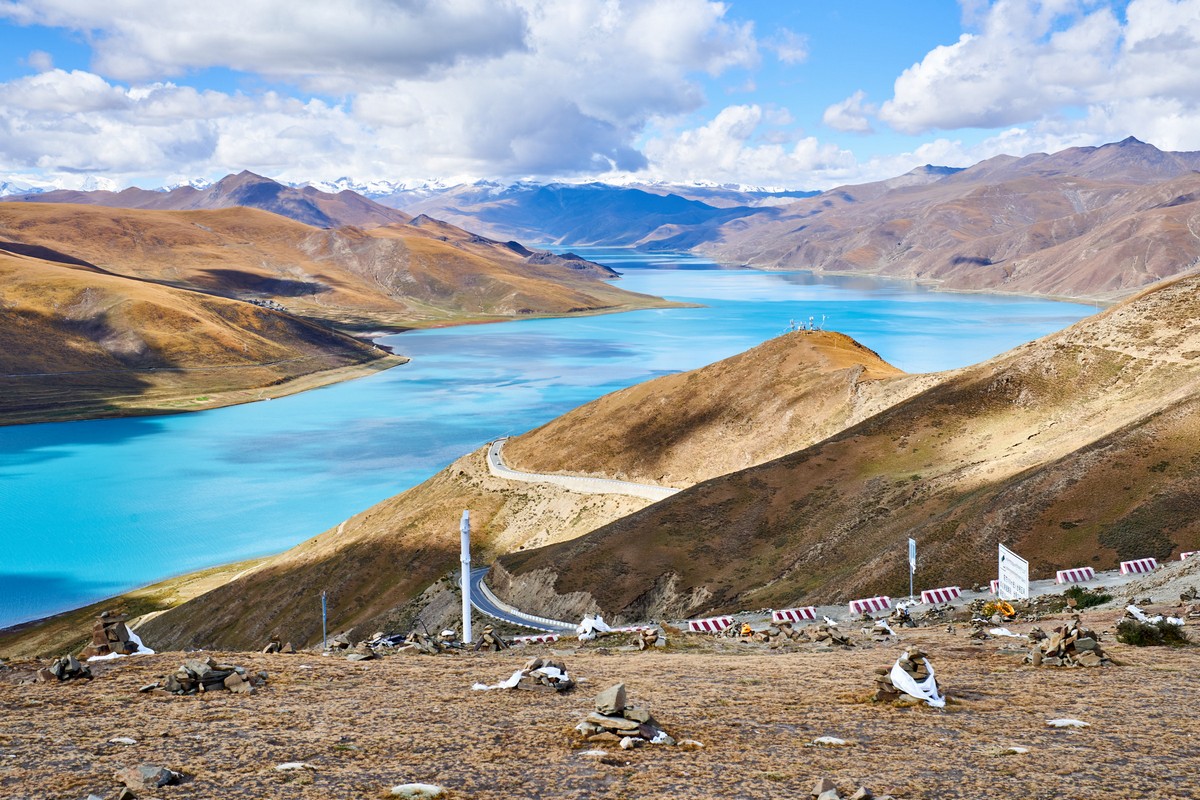 Down at its level, the lake is even more phenomenally out of this world. The only problem is locals insisting you take a ride on their yaks, take a photo with their goats, dogs and cats!… 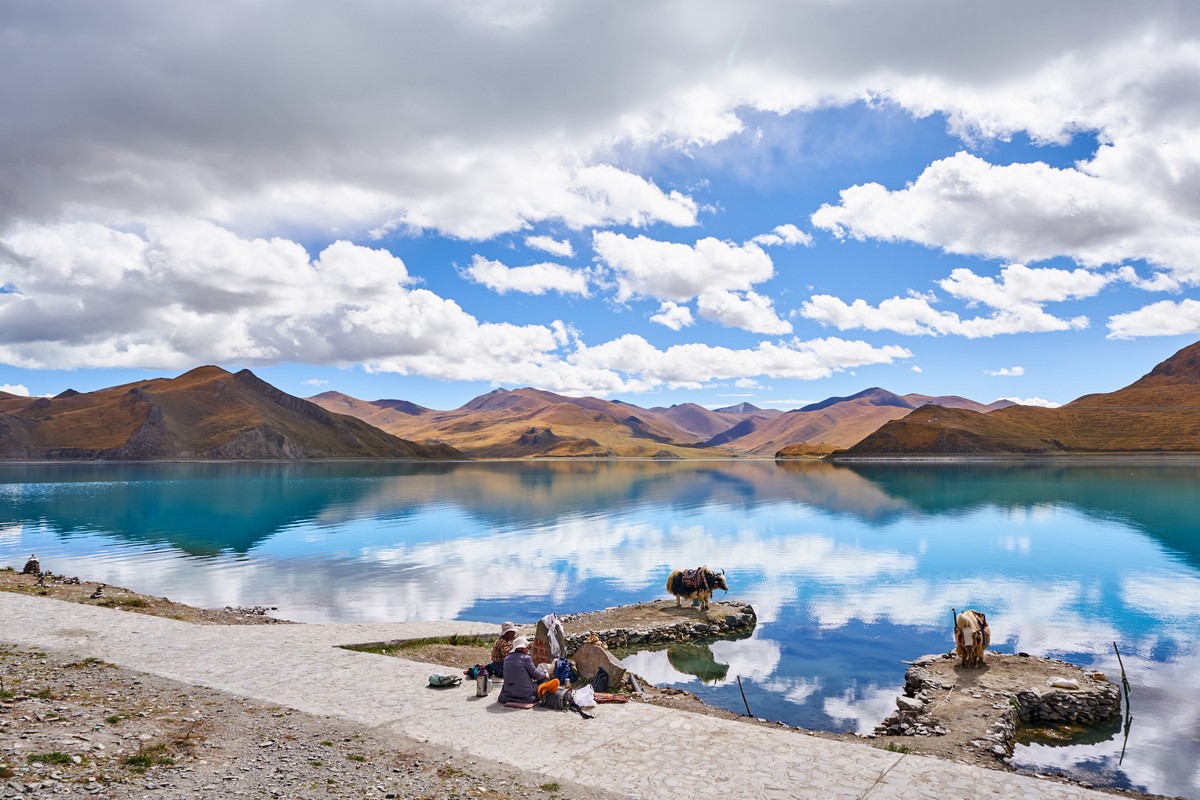 I prefer the yak on its own – sans tourists:

Again that problem: which pics to pick, which to throw out? They’re all superb!

What made looking at the lake even better were feelings of euphoria – the first symptoms of altitude sickness! Eek. We decided to cut the lake-gawping short (after snapping it aplenty)…

Down we drove – across the bottom of glaciers -> 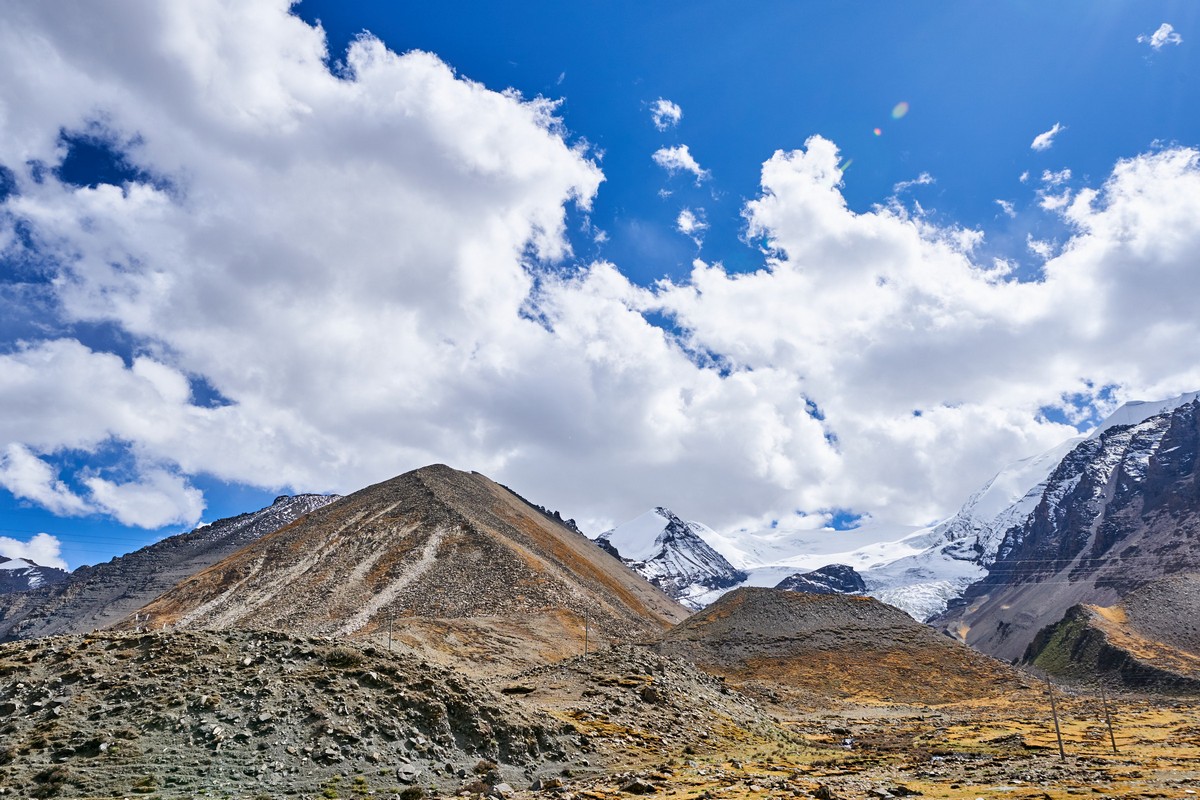 The name of the glacier – Toyota Corolla. Oops; I mean Karola Glacier. To be frank, not the most dazzlingly beautiful of sights. Not a patch on, say, Engilchek Glacier – especially when you walk along it for a week ).

You’ve heard of Potemkin villages, right? Well, they have them up here along the glacier! Facades of houses, but they’re just walls; you open a door, go through, and you’re the other side. Why? Perhaps so the pics published on blogs by visiting tourists look all the more convincing and inviting so other tourists will come?…

Some of the other tourist infrastructure is a lot more… genuine – and genuinely helpful and convenient. Example: 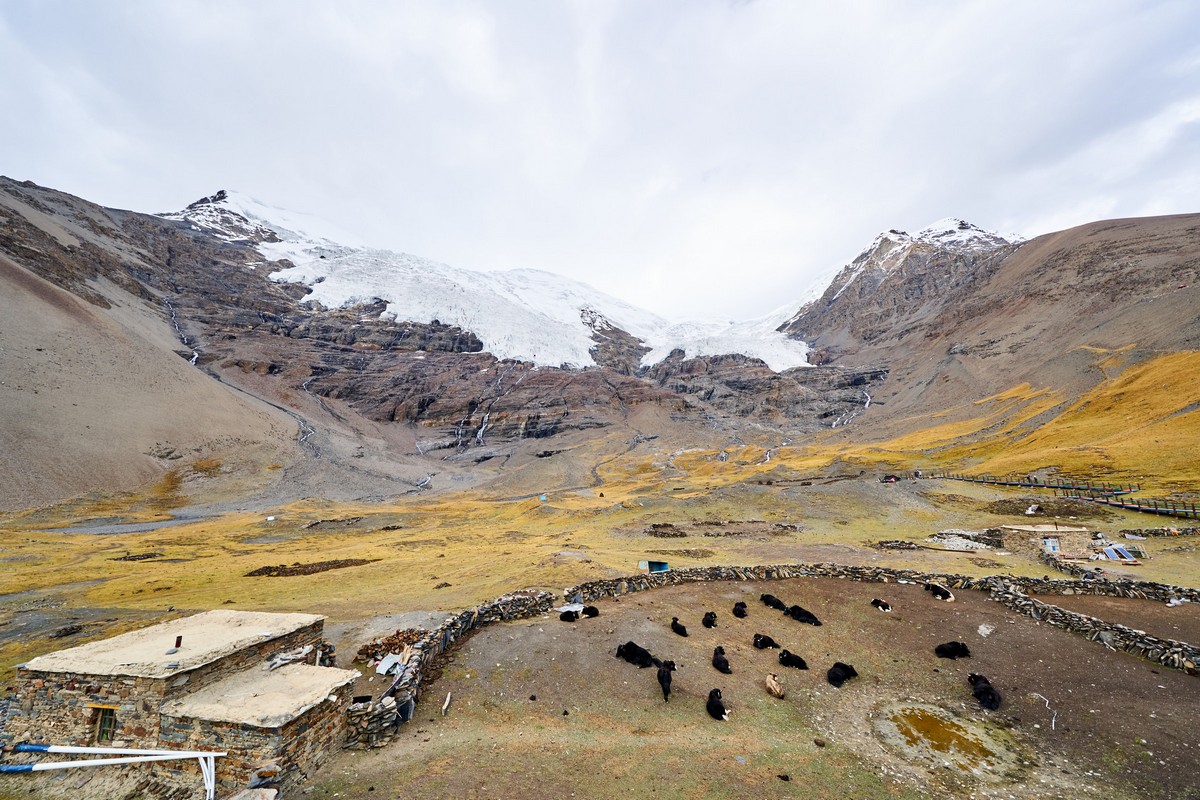 Next up, a reservoir, whose name I don’t recall, here. Colors just as bright as the lake:

Suddenly, utilities-infrastructural kit getting in the way. It, too, remarkably, rather beautiful! 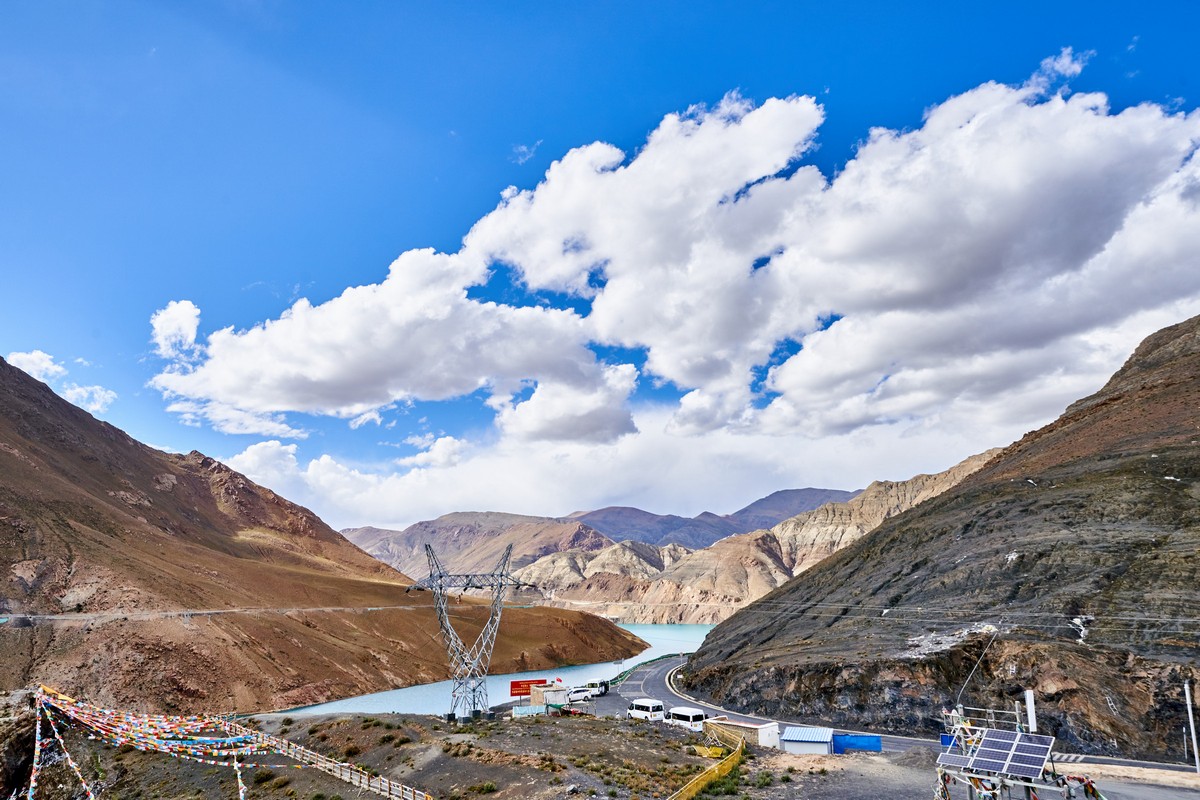 Flags! Popular here. As if the scenery needed more color ). 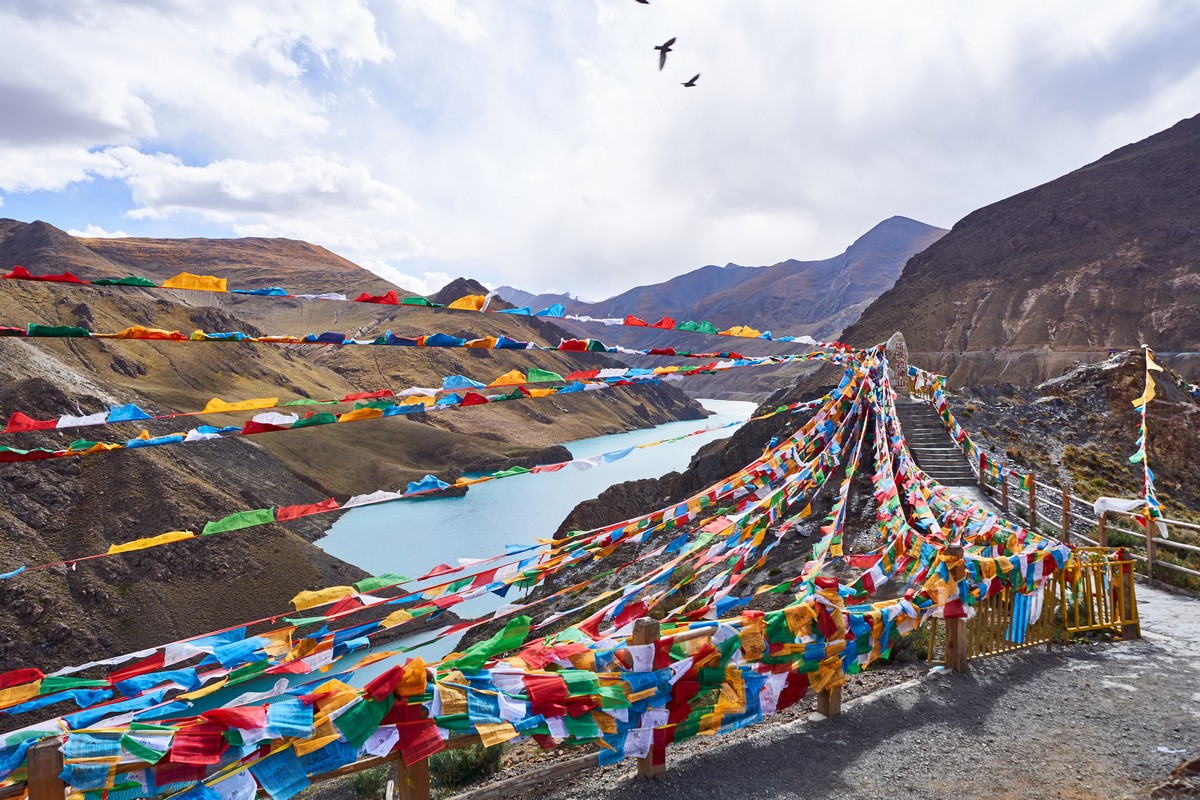 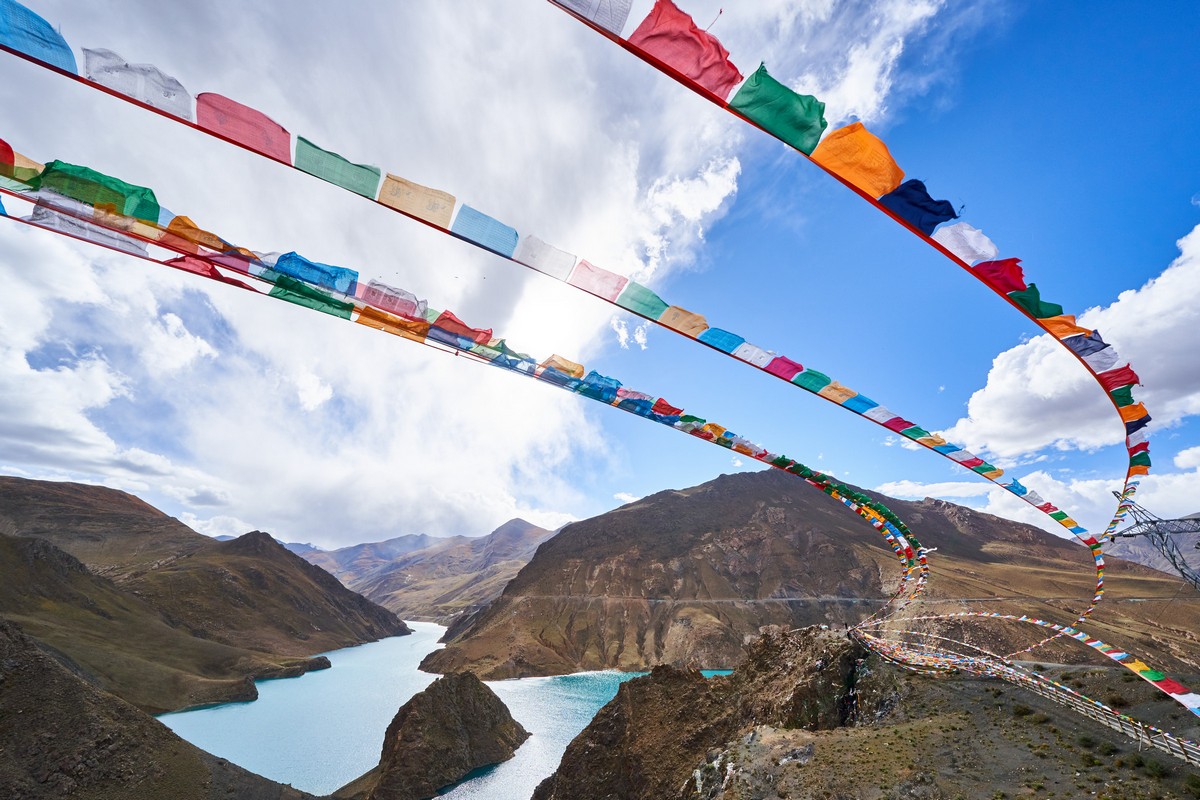 We continue our journey. Next up – a Buddhist theme, but I’ll save that for my next post…