Yesterday you’ll recall we were on Sumishir being bowled over by its Zavaritsky Caldera. Today, sailing southwest along the string of Kurils, we first took in the rather plain Broutona and its bay of the same name (named after the British naval officer and explorer William Broughton). And after that – two small islands together referred to as Chyornye Bratya – the Black Brothers, with one called Chirpoy, and the other – Brat Chirpoyev (Chirpoy’s brother!), here.

Here they are: in the distance – Chirpoy; nearer – his brother: 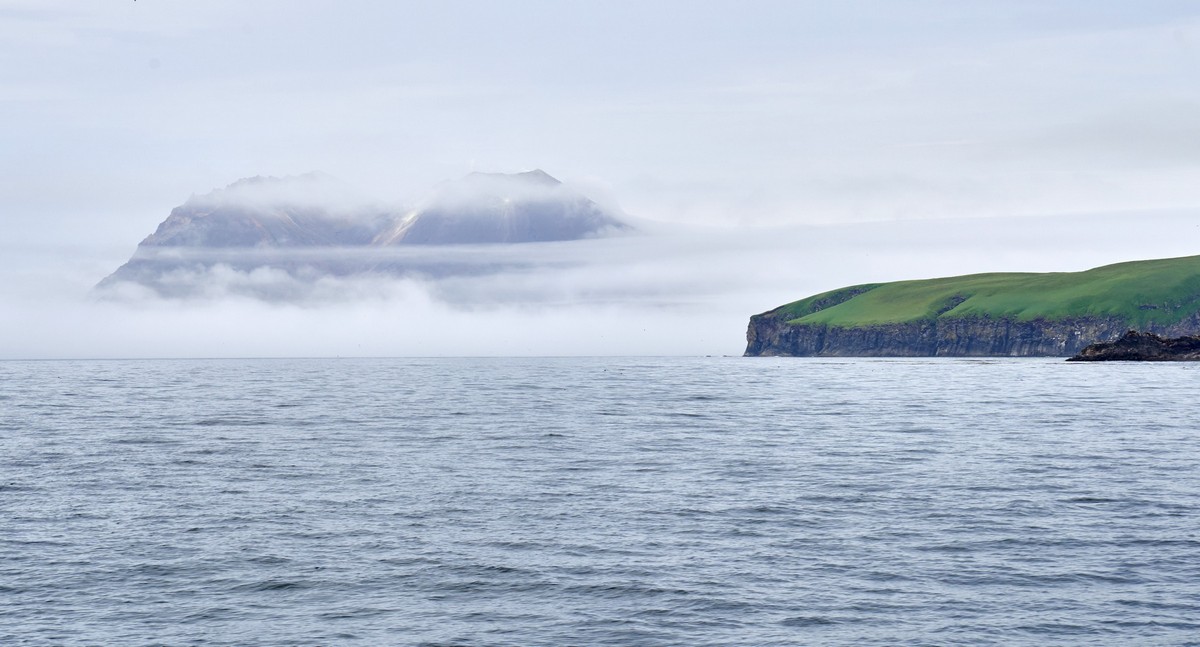 Chirpoy recently erupted a few times, and has some impressive craters up top, plus fumaroles and assorted other volcanisms. His little brother boasts less volcanisms, but makes up for that with a large colony of seals, which we were of course planning on inspecting…

The first foray onto kid-brother was made up of our American friends and their truckloads of filming kit ). And I think it was on this day when I heard them joke how they’d shot sooo much footage that their memory cards in their cameras had become physically heavier! The retort: the cameras’ batteries at least became lighter!

Seals, seals – everywhere. Such cuties they are too. From up close, and from a drone:

The reason why the film crew went first was the fact that the seals spook very easily. A Homo sapiens merely has to show his/her face and they dart off out to sea, and only well away from the shore do they look back to see what the unusual visitors were all about!

So, when the non-film crew lot approached – they did so ever so slowly: after a while they got used to the aliens’ presence: 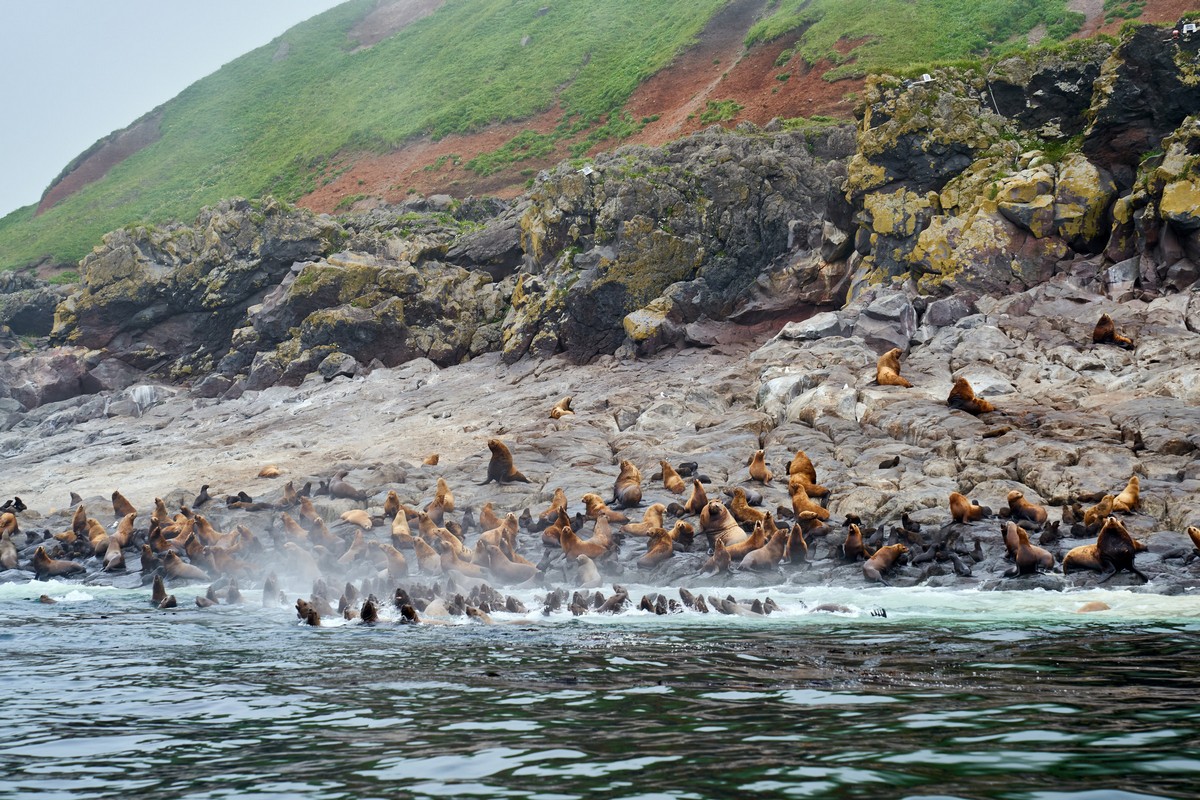 It was cool observing them from the boat, but better would be from the shore… 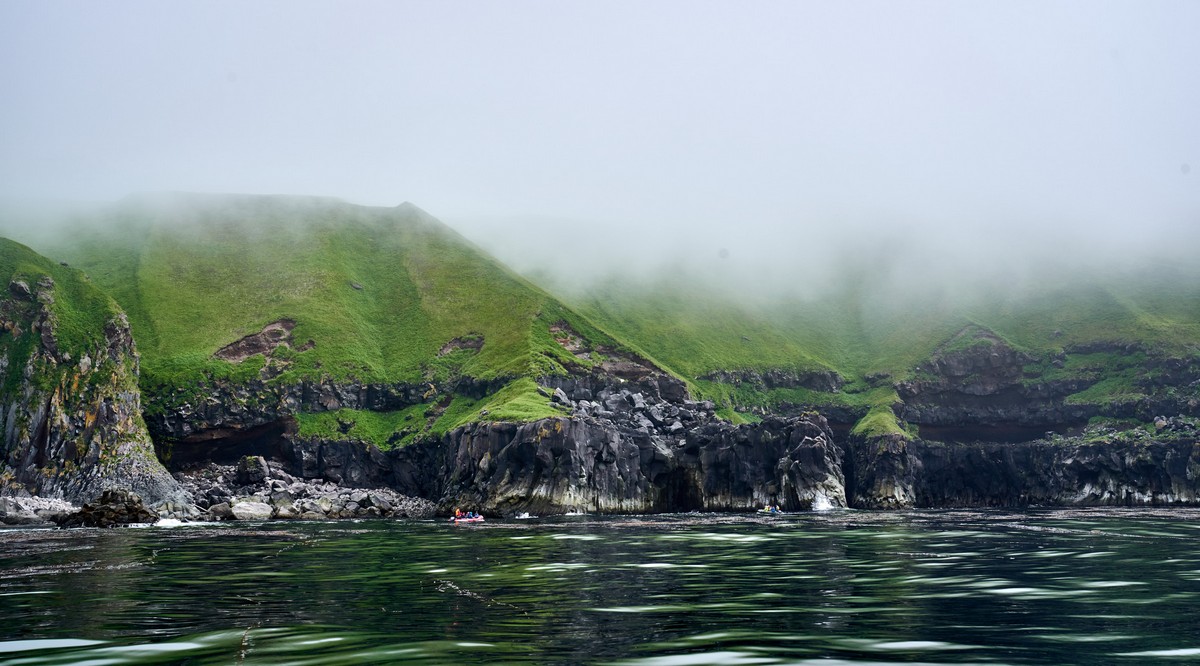 Thing is – most of the shoreline: very boat-landing unfriendly: 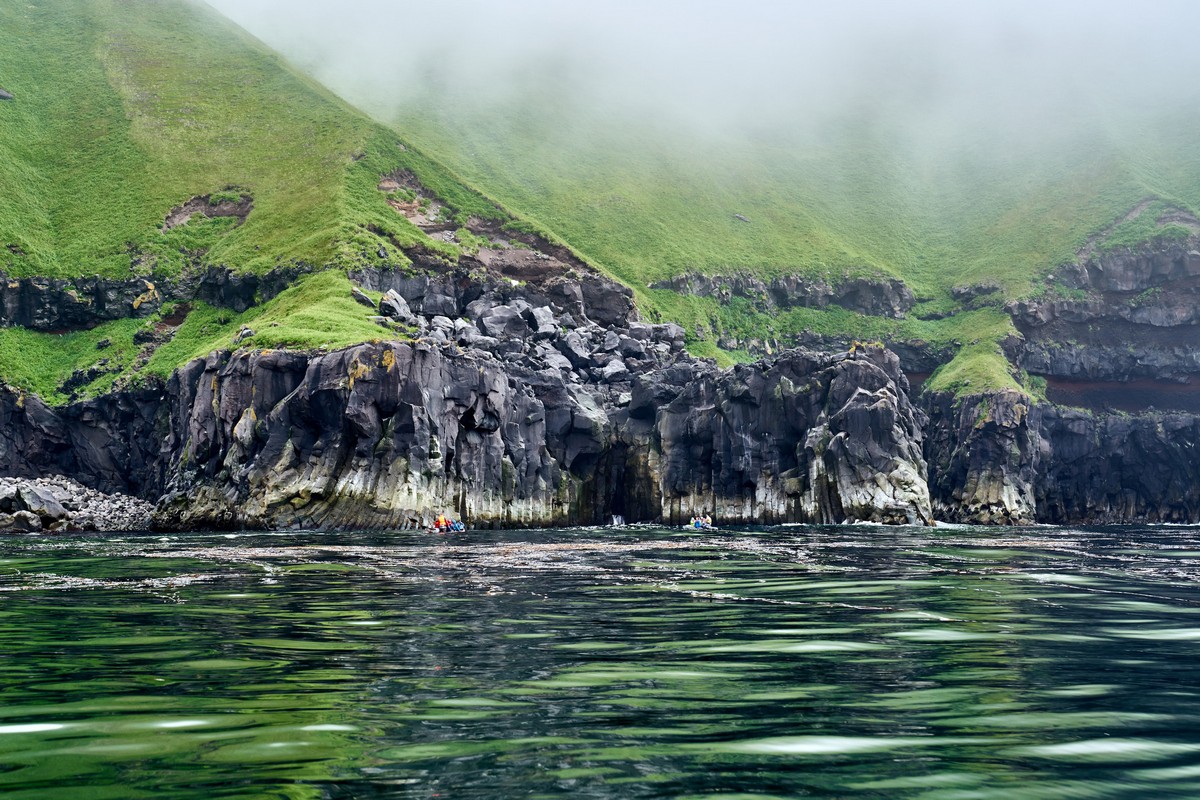 Budding volcanists – attention! Check out these layers showing different lava flows at different times. Actually, the structure’s like this: The rocky layers: lava; the finer layer with the reddish shade along the top – this was all the volcanism that was emitted out into the sky, which then fell back to earth and settled. Next – another layer of lava (after another eruption); another layer of aerial volcanisms; and so on. Volcanology – gotta love it!

Right. Now… er, just where are we going to land this dinghy of ours?! 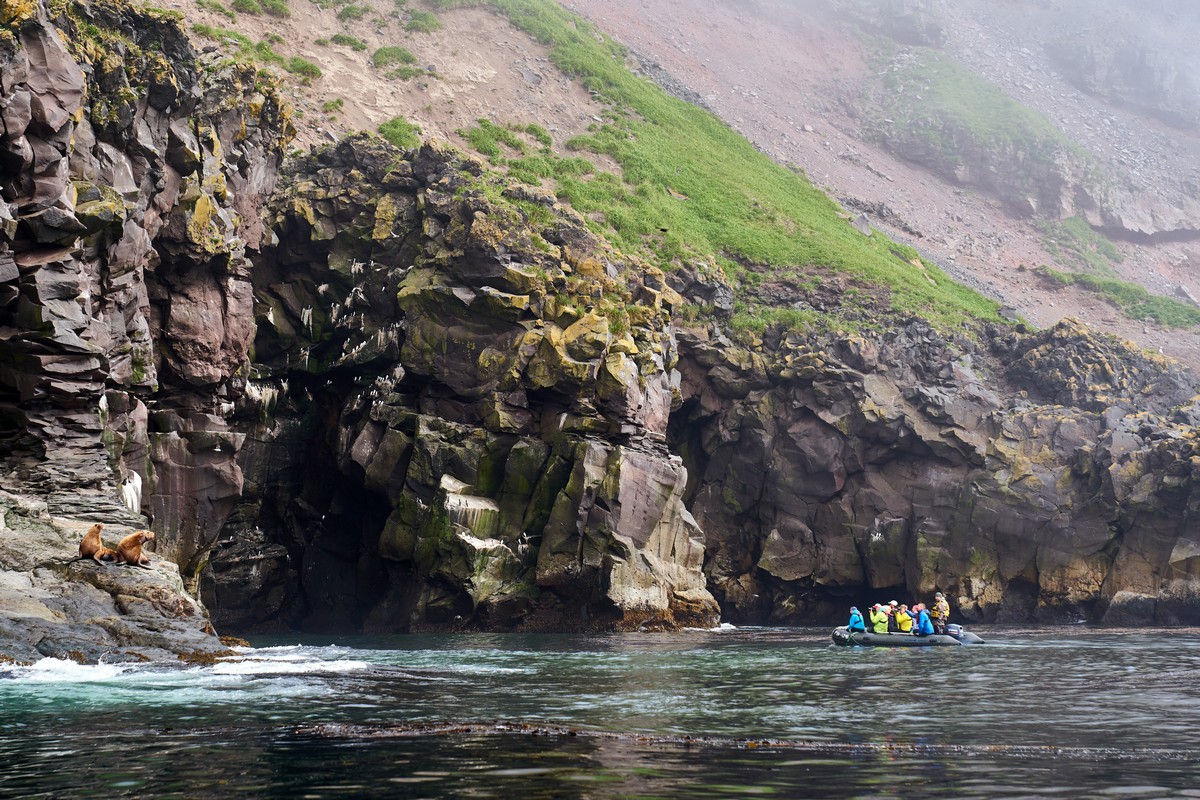 Later, getting back onto the dinghy was by no means easy either. But we did manage it – eventually:

Though the volcanic rock made landing and getting back off the island tricky, a long shelf of it made the perfect seal-viewing vantage point: 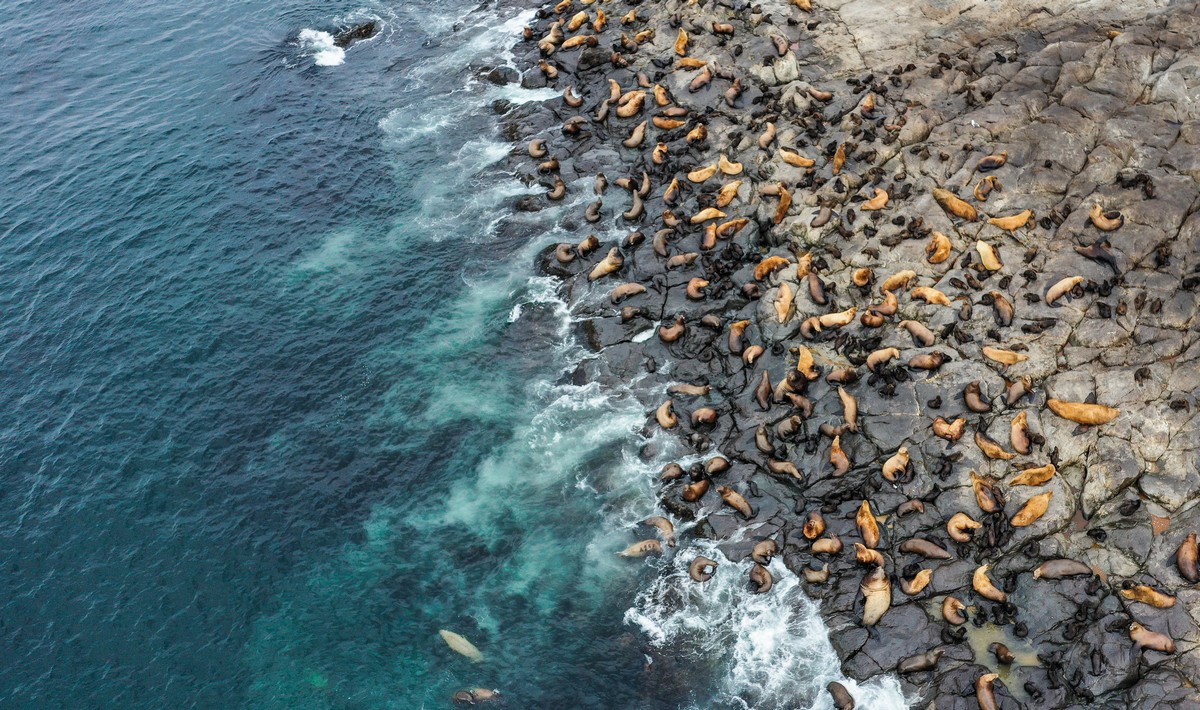 You may not be able to see them, but up on that ledge cameras were installed. Not our film crew’s, but those of our resident zoologist-and-seal-expert Vladimir Burkanov and his team. The cameras are here on a long-term basis, occasionally taking pics to keep track of what’s going on in seals’ world around here. Vladimir checked the cameras, took some readings, adjusted this and that. Then he showed us the main attraction…

As I’ve already mentioned, colonies of seals and sea lions, besides being sweet and adorable – also… stink to high heaven and make the most ghastly, constant cacophony. But, besides the constant drone of thousands of guttural throats – they also react specifically to certain cues. The main one – other seals/sea lions. A less frequent one – visiting Homo sapiens… whistling! Oh yes: if you whistle loudly, they respond with a chorus of clamoring – no doubt their version of whistling ). Check it out in this vid:

So yes – they yell, they smell, and they ‘whistle’, but these are undeniably funny beasts:

This poor sea lion has some fishing netting round its neck (. 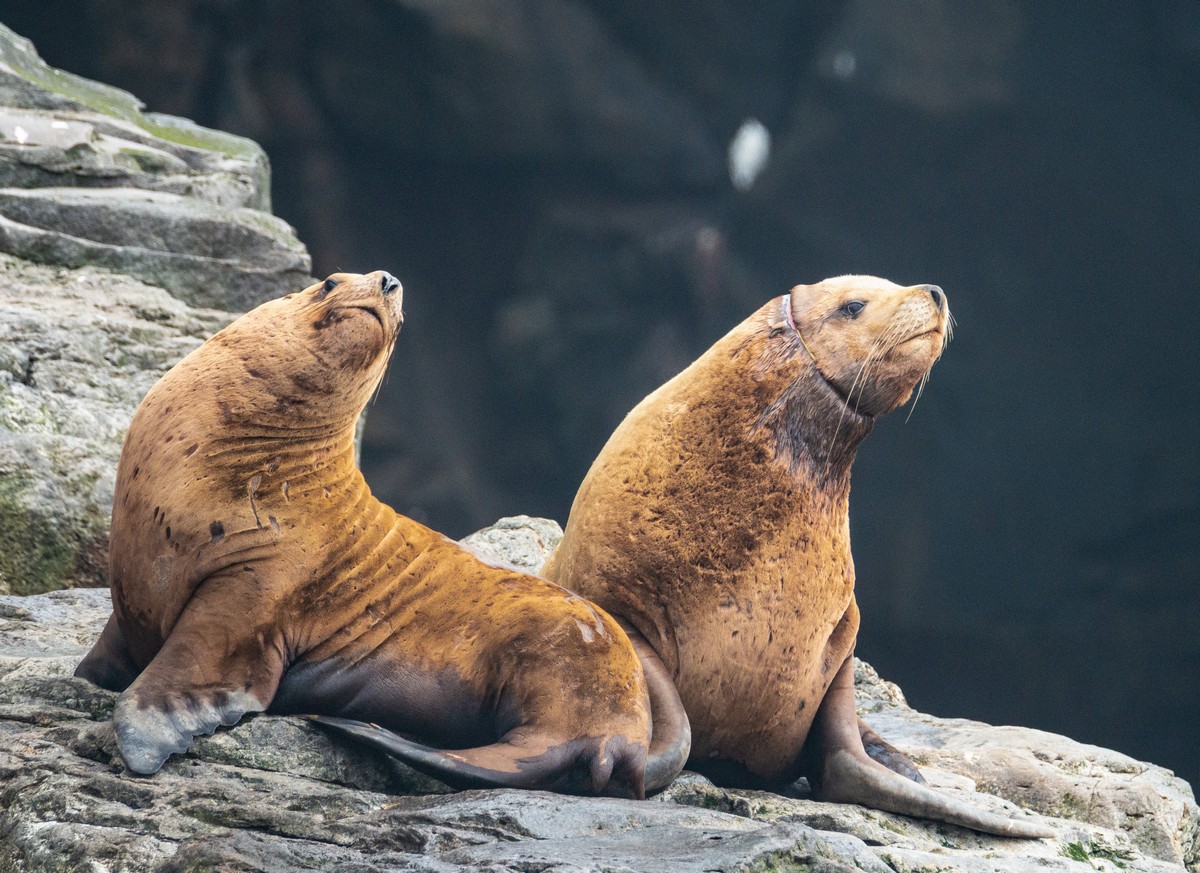 It makes you want to go up to it and free it from that noose. Alas: not possible: if a human approached one of the seals/sea lions, all the others around it would panic, and run away as fast as possible – crushing and maiming the young among them (.

But that’s enough about wildlife for one post. Time for the next topic… 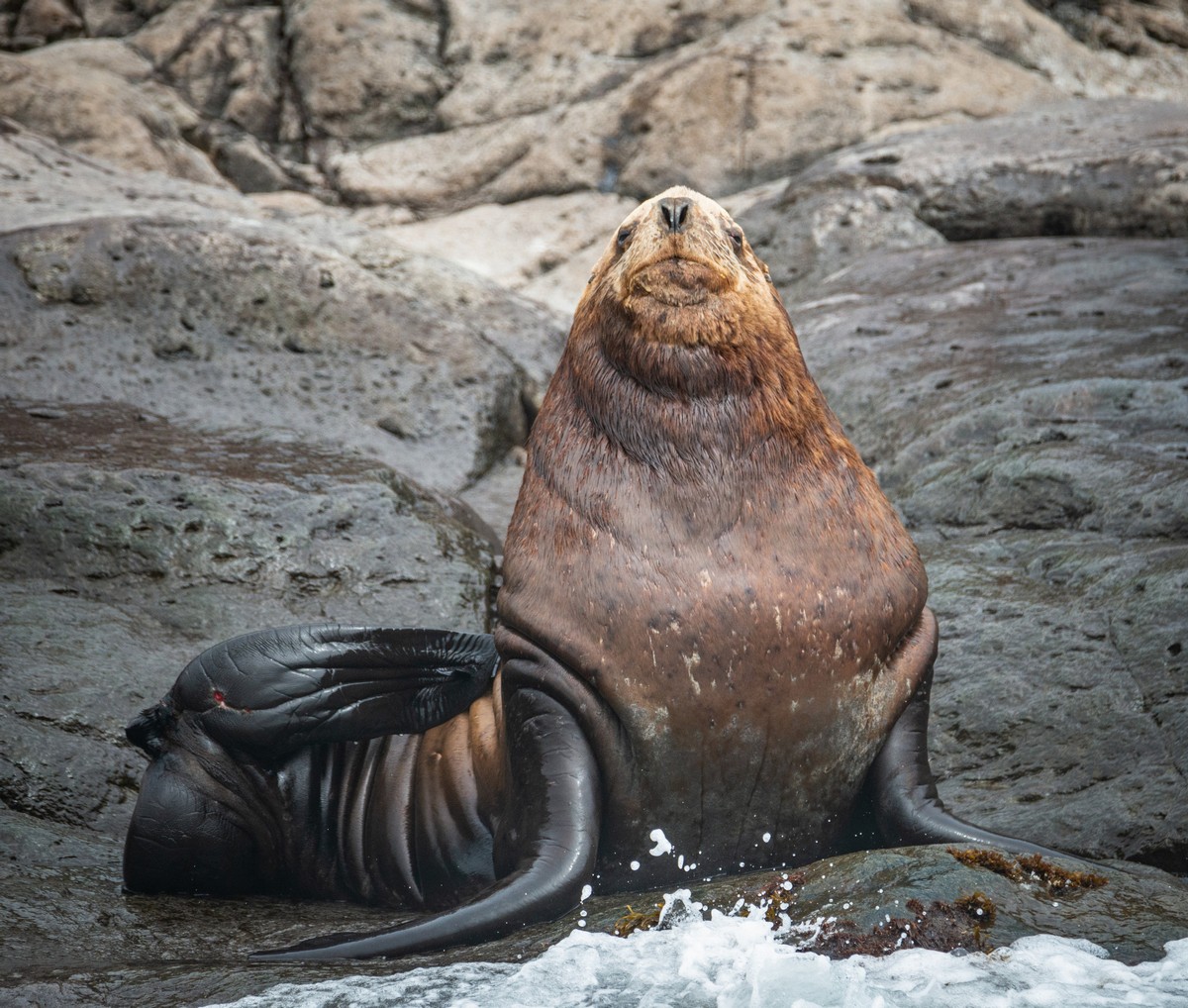 We were planning on landing on Chirpoy after our seal-fest on his brother to check out the island’s many volcanisms – but it wasn’t to be. The next morning we woke up to a thick fog and thick clouds which hid practically everything from view. Now, as an experienced traveler to remote parts of the world with poor weather, I quickly realized there’d be nothing to see today even if we attempted a landing. But that didn’t stop some of our posse giving it a go… 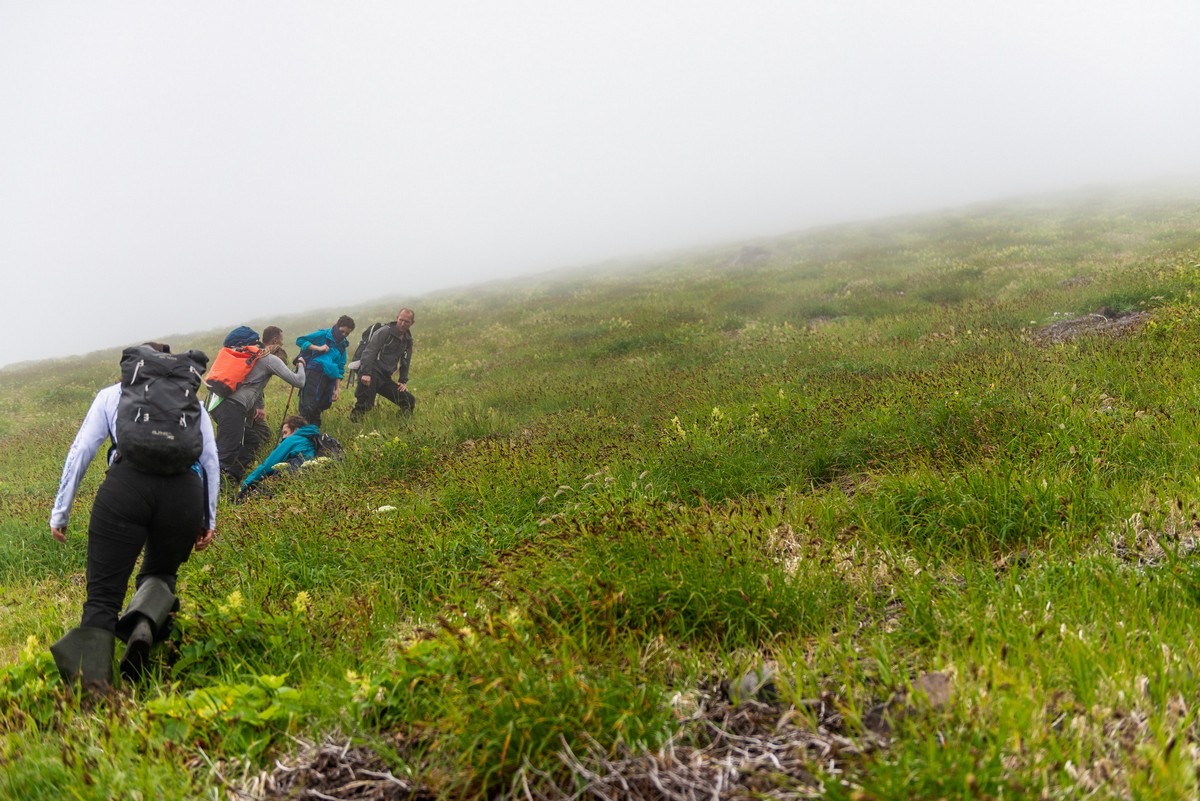 …They even got up to the top: 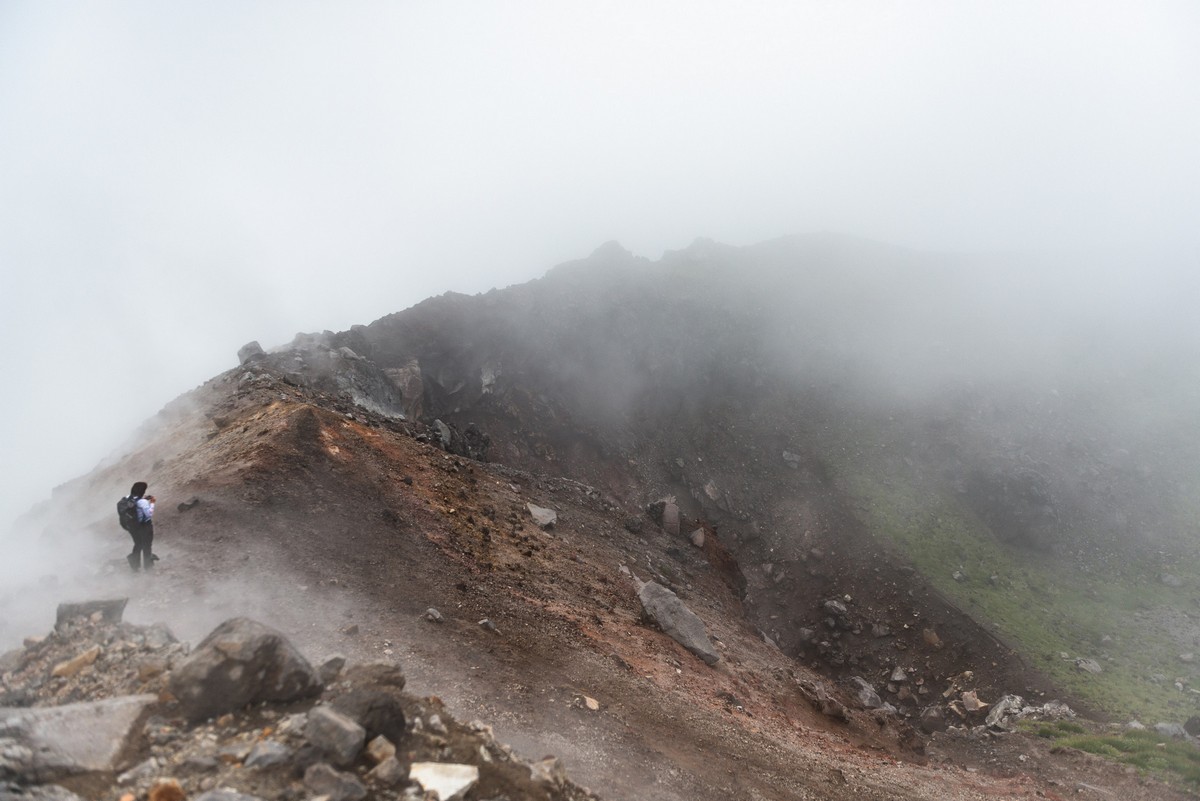 But they were the first to admit it was hardly worth it.

‘Let’s get out of here’, this photo would say if it could talk: 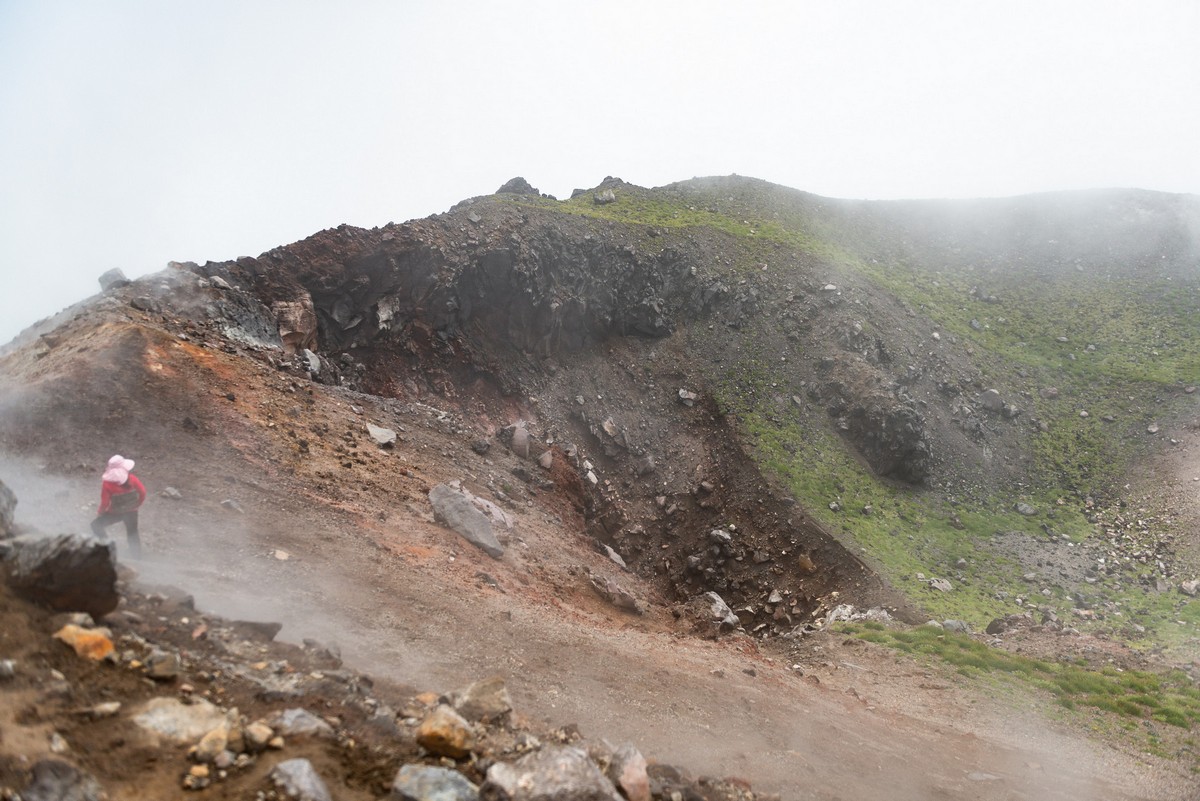 Such a shame we missed out on Chirpoy: when the wind blows the clouds away you can clearly see it’s a picturesque Kuril:

The beautiful Chirpoy will have to be checked out next time…

And that’s all for today folks; farewell Chirpoy brothers, it’s time for us to sail onward…

All the pics from our 2019 Kuril adventure are here.