The topic of today’s post – these cute little charmers: 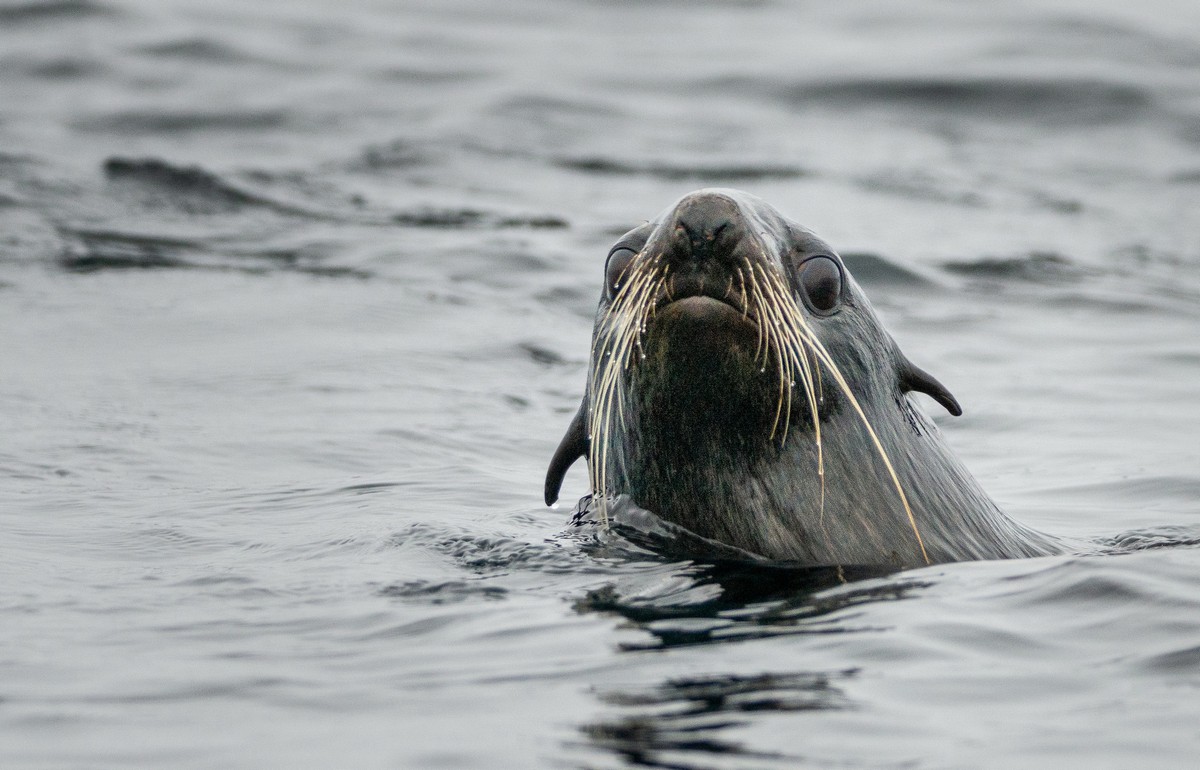 But first, some intro….

The length of the string of Kuril Islands is 1200 kilometers from top to bottom (that’s just a bit shorter than the full length, top to bottom of Great Britain, or about the same as the distance between Copenhagen and Milan, or between New York and Chicago). The ‘official’ number of islands is 50+. But there are also other ‘mini-islands’, which are classified as mere ‘rocks’, for example, Lovushki Rocks. 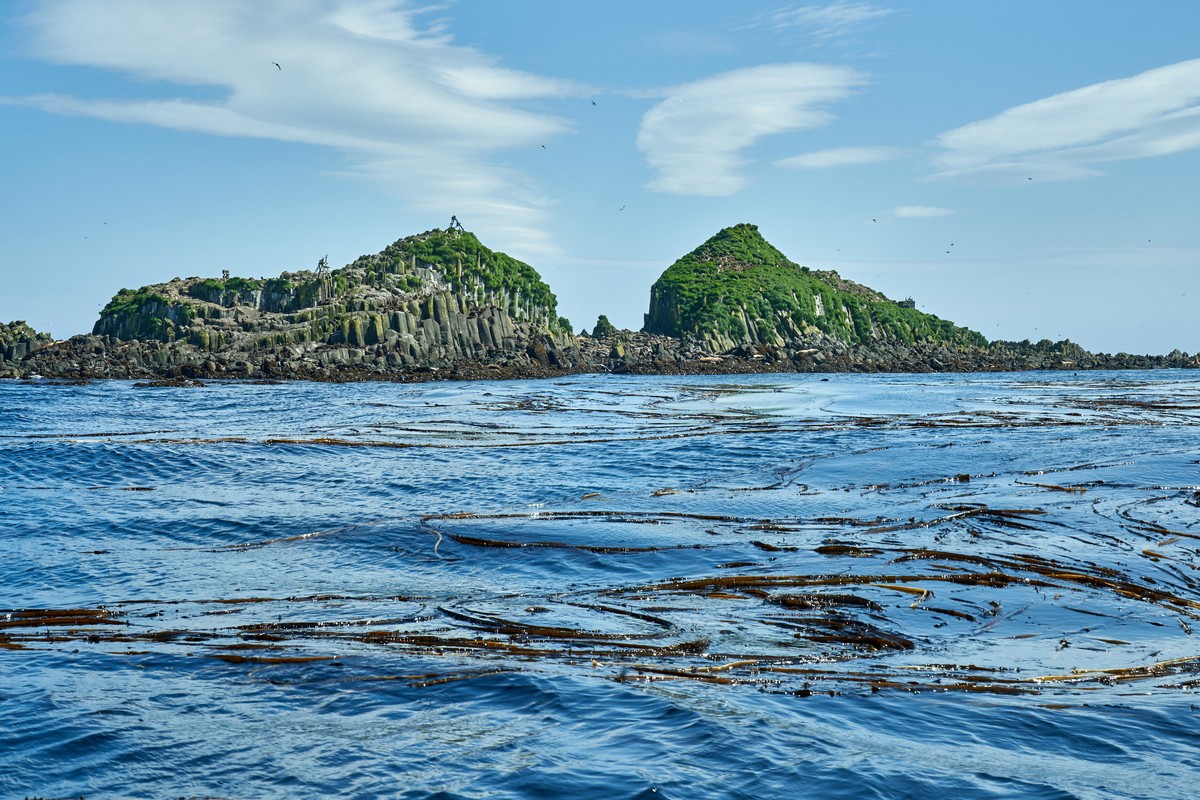 Like I say, kind of a mini-island. However, here you can see it’s not really up to the title ‘island’; it is just a rocky outcrop. 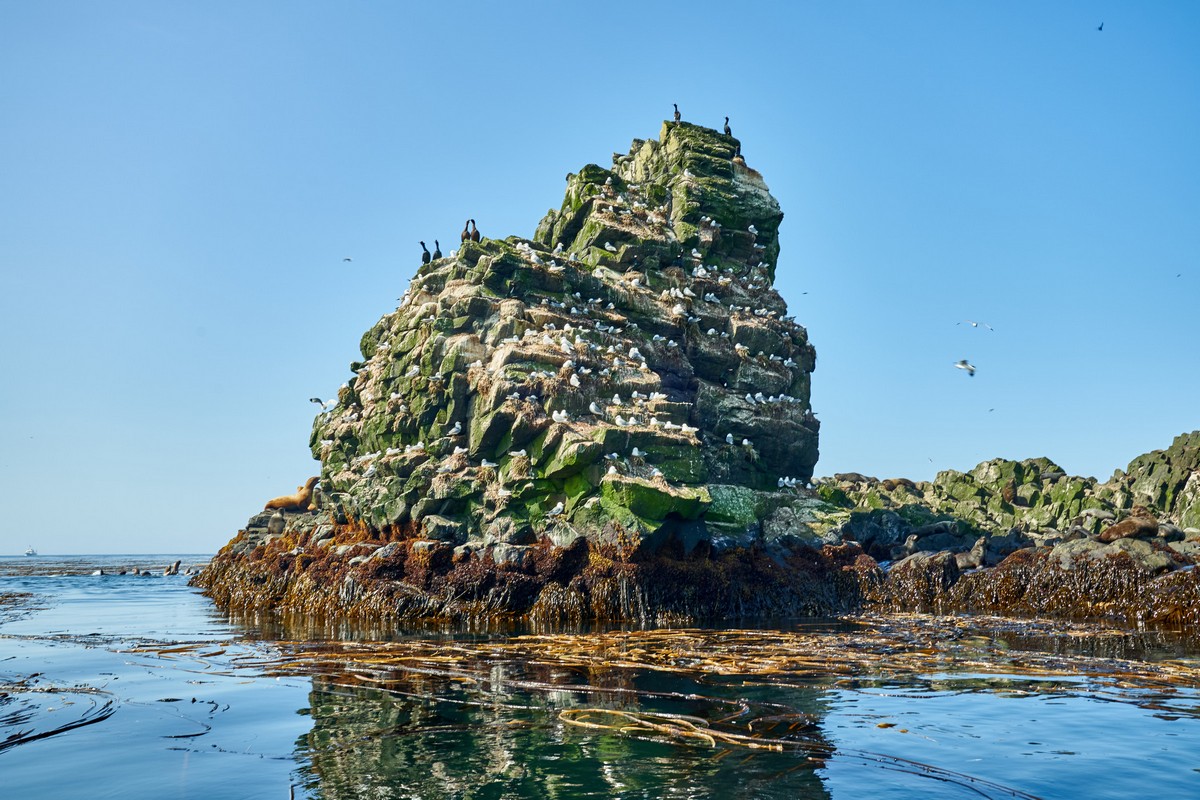 In good weather the views from Lovushki of Shiashkotan are fantastic. While even when it’s foggy both that island’s volcanisms – to the north (Sinarka) and to the south (Kuntomintar) are visible. 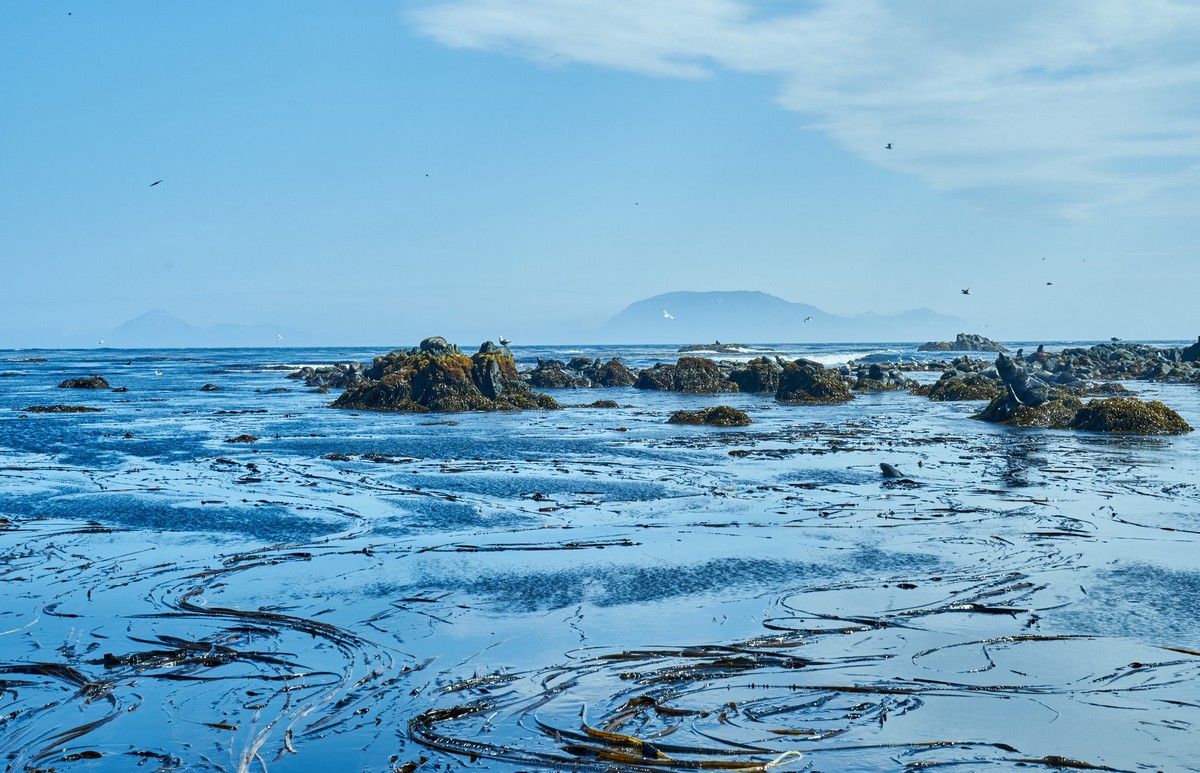 In places Lovushki is most impressive. The birds think so too: 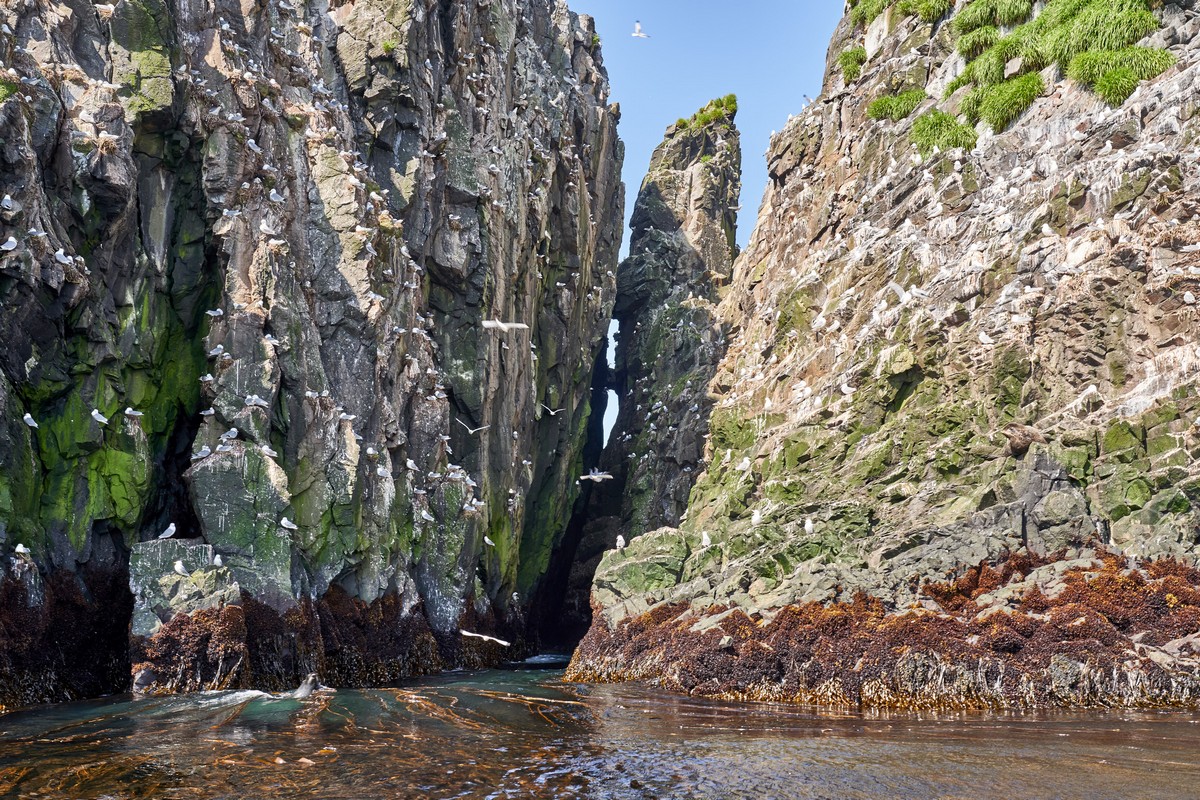 Here we are, setting out to inspect things round here more closely -> 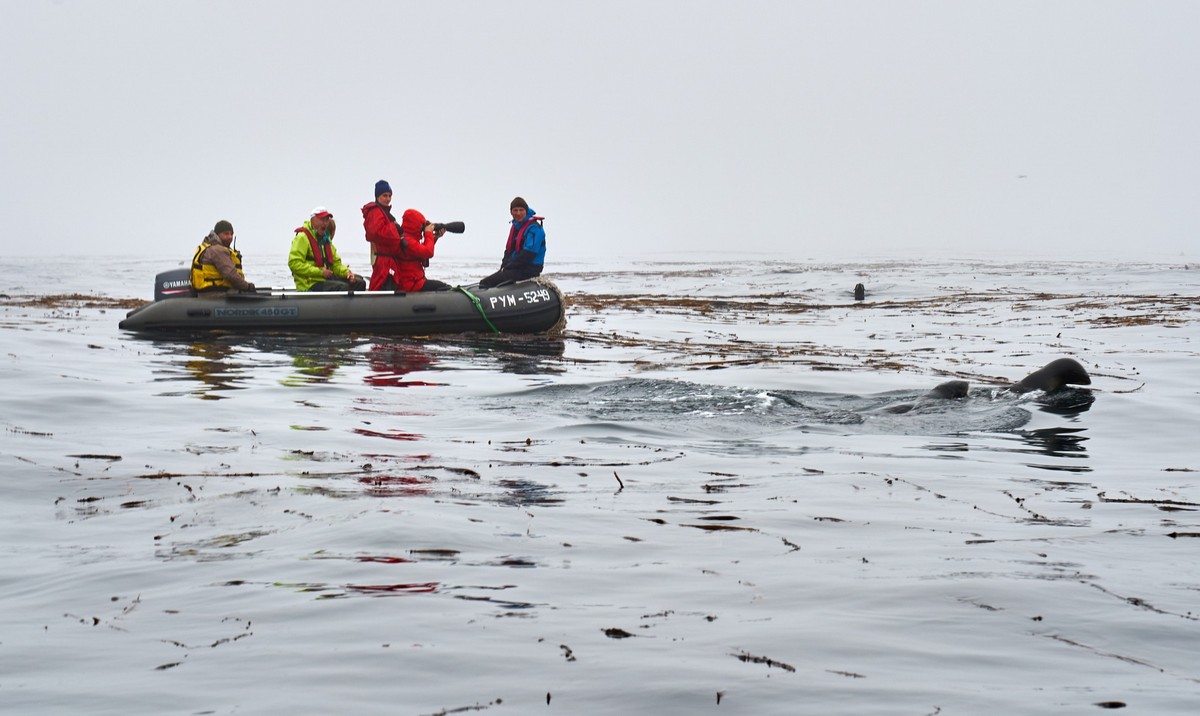 And there’s plenty to closely inspect; first up – seals, for this is the site of one of the Kurils’ main colonies thereof. 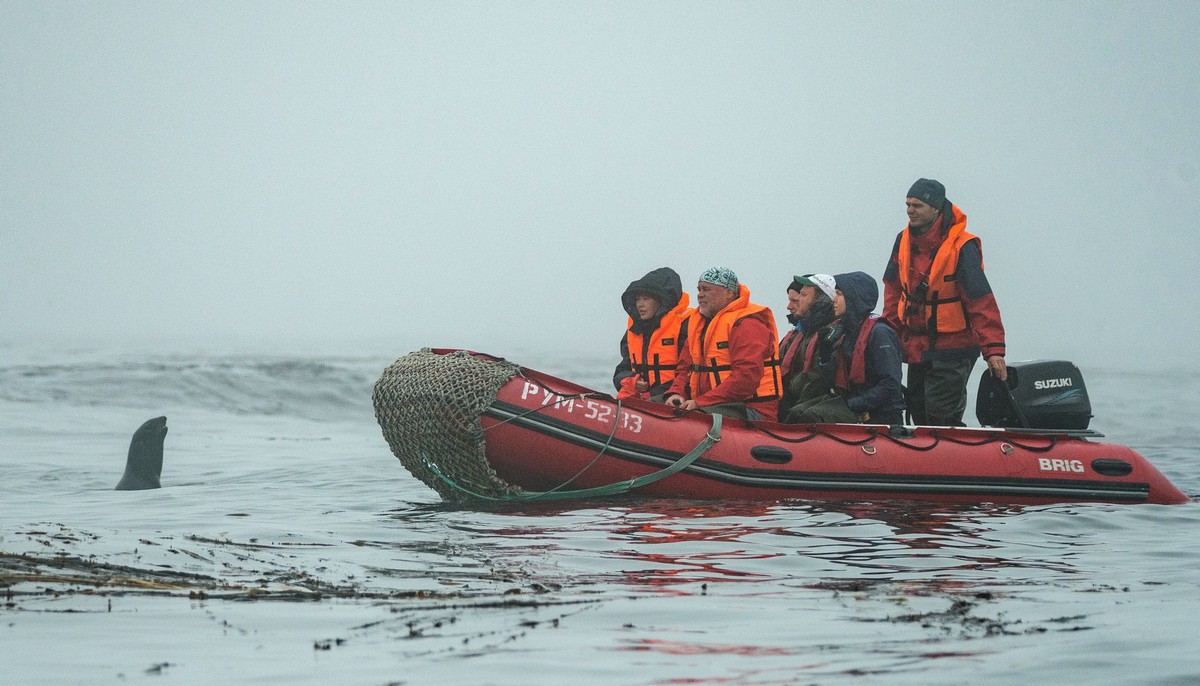 Wow. This place is simply seal paradise. But I feel it necessary to jump ahead a bit to cover our full Kurilian seal experience, for we saw, ooh, about a zillion of them during our whole expedition. Assorted locations are crammed full of them, and given the abundance of fish in the Kurils they’re all nicely sated. It is indeed the ideal place to live in the world for a seal. If I were to come back as a seal in my next life – I’d want to be here, for sure! Anyway, the below seal-tales-and-pics also come from other popular seal resorts – Chirpoy Island and Tyuleny Island (Tyuleny: the Russian for Seals – what a coincidence!). 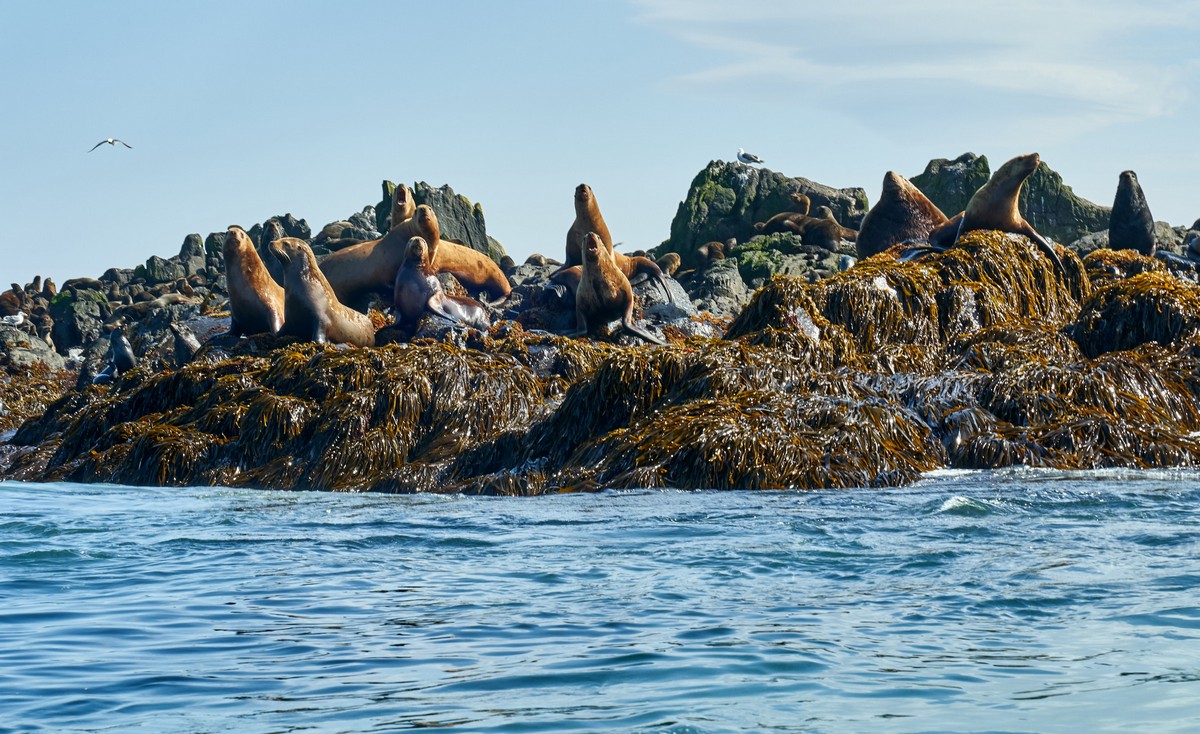 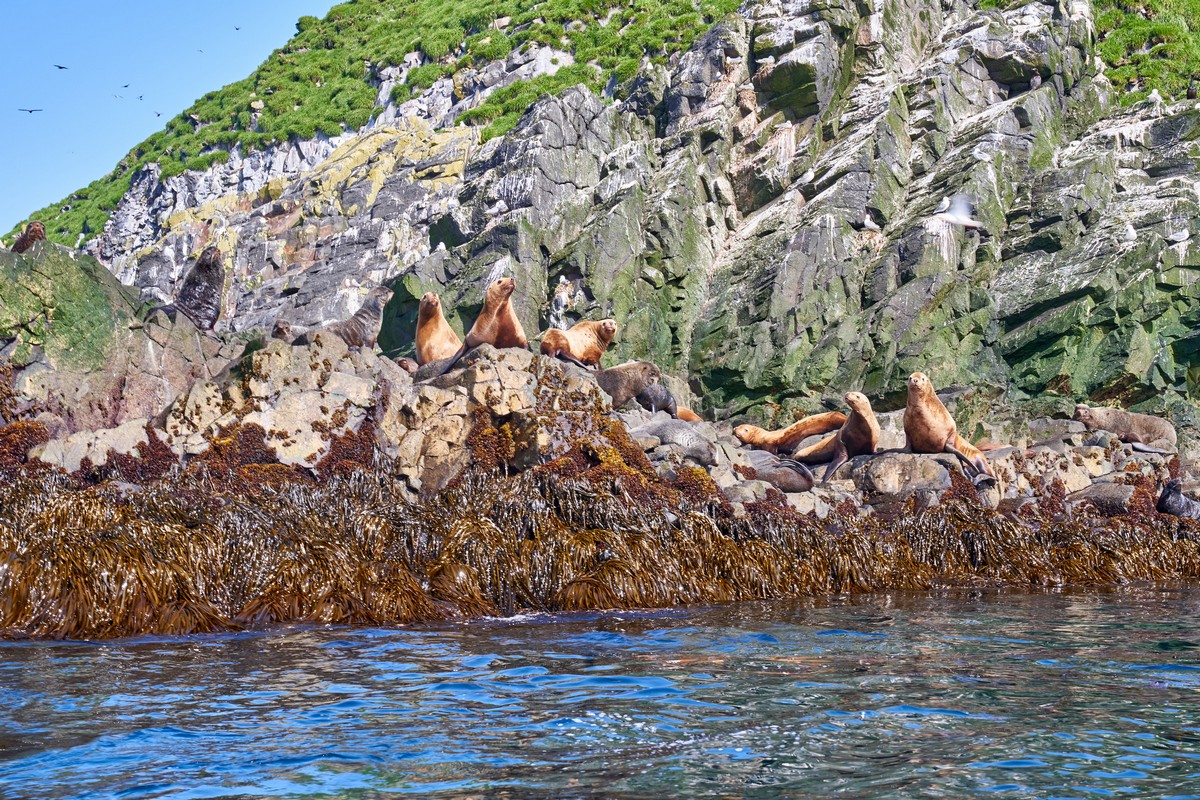 The typical family unit: the male… and a full harem of females!

Gotta love it – how he appears to have placed his family across the full set of shelves! 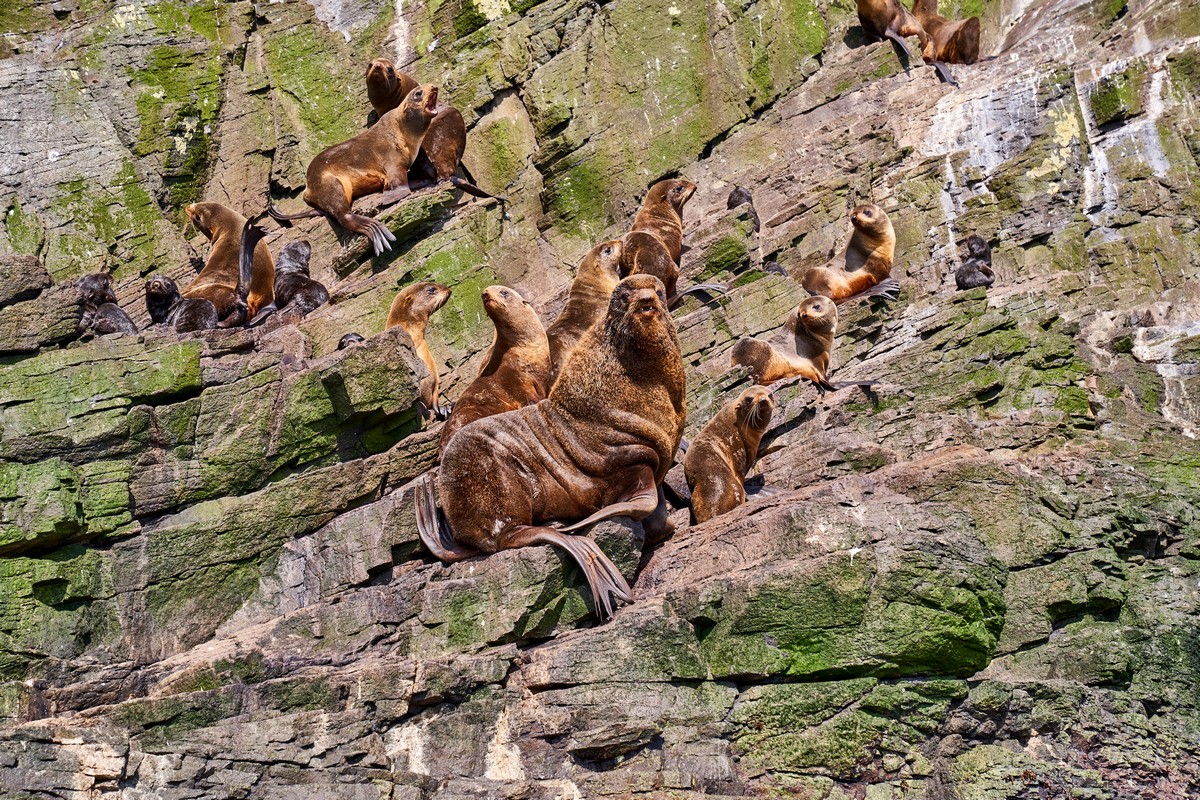 And here’s his next-door neighbor peering over, all curious. Or is he envious: ‘Why didn’t they take my photo?’! 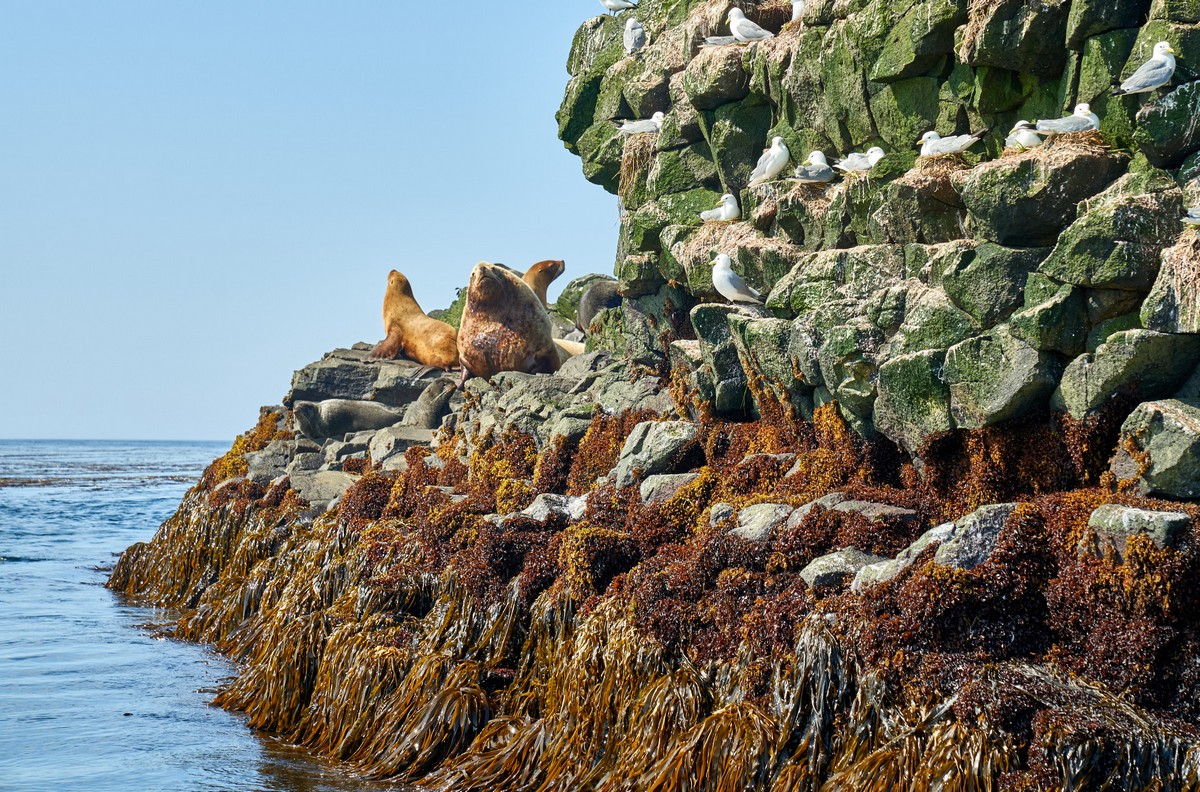 It’s the same with the seagulls – one nest per ‘shelf’! 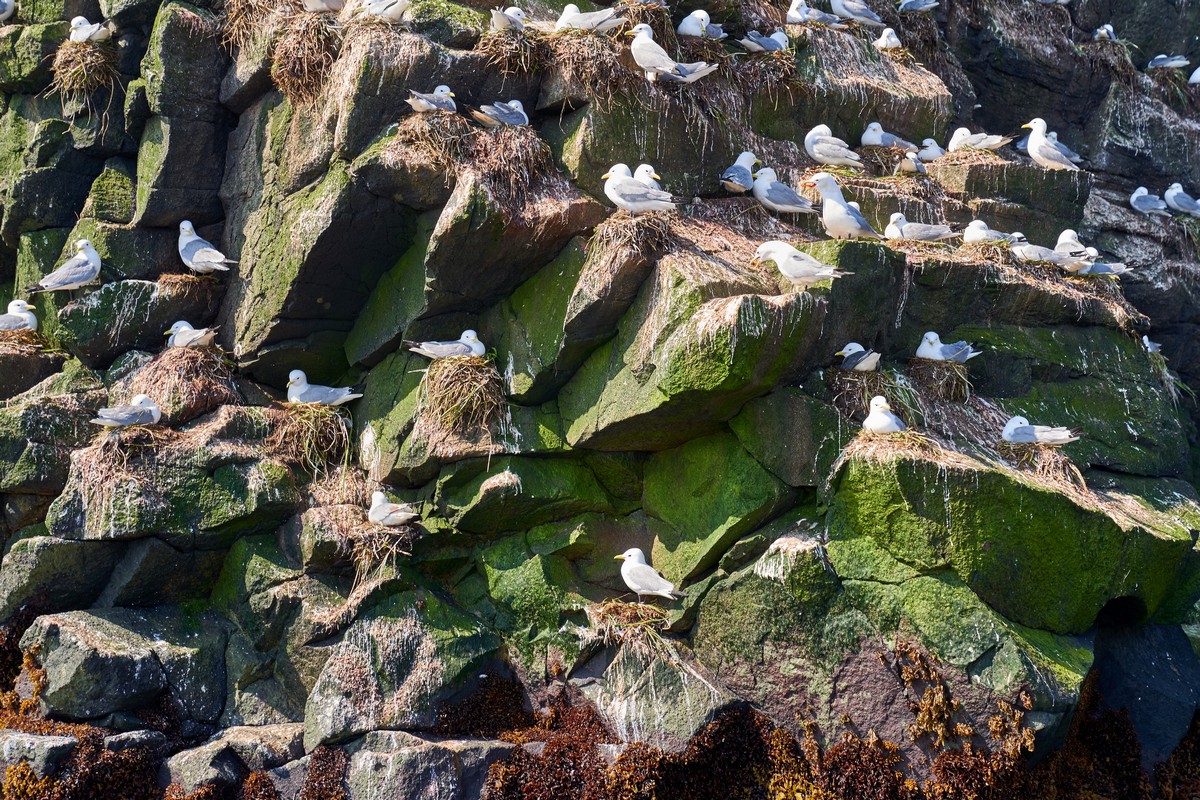 Yet more seals. Making much noise – and smell! 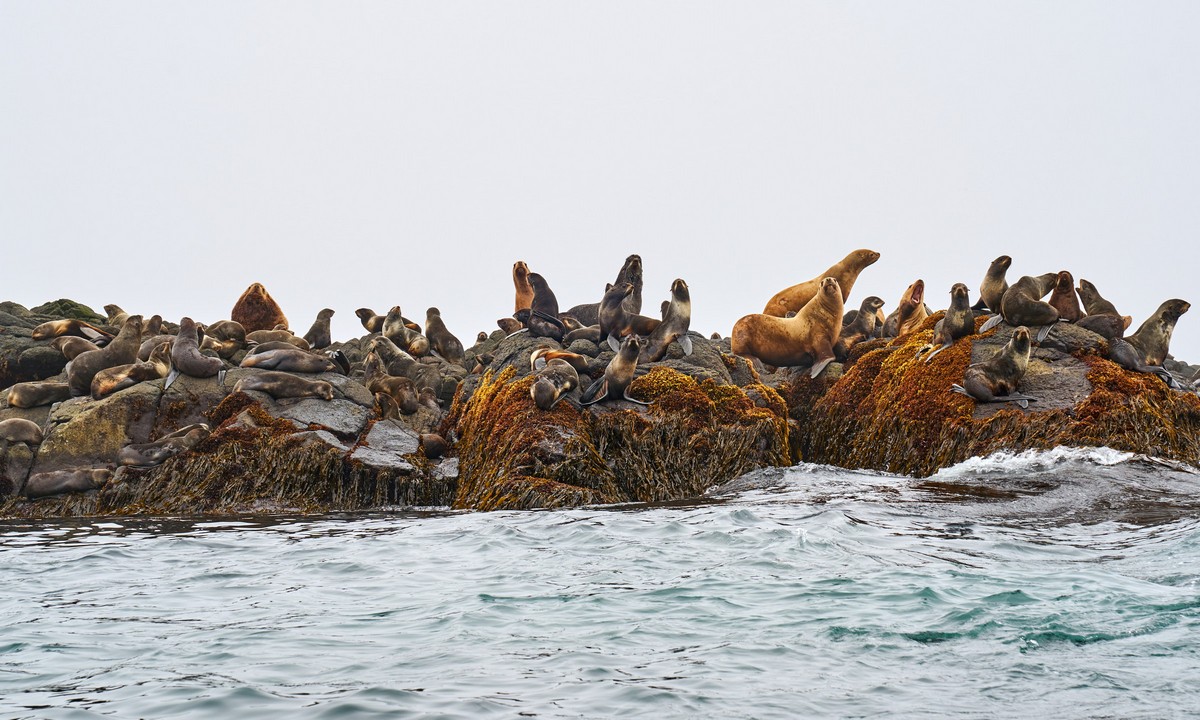 Yes, the pong can be rather overpowering at times. Unwashed seals, decomposing seal carcasses, seal dung – quite a cocktail! 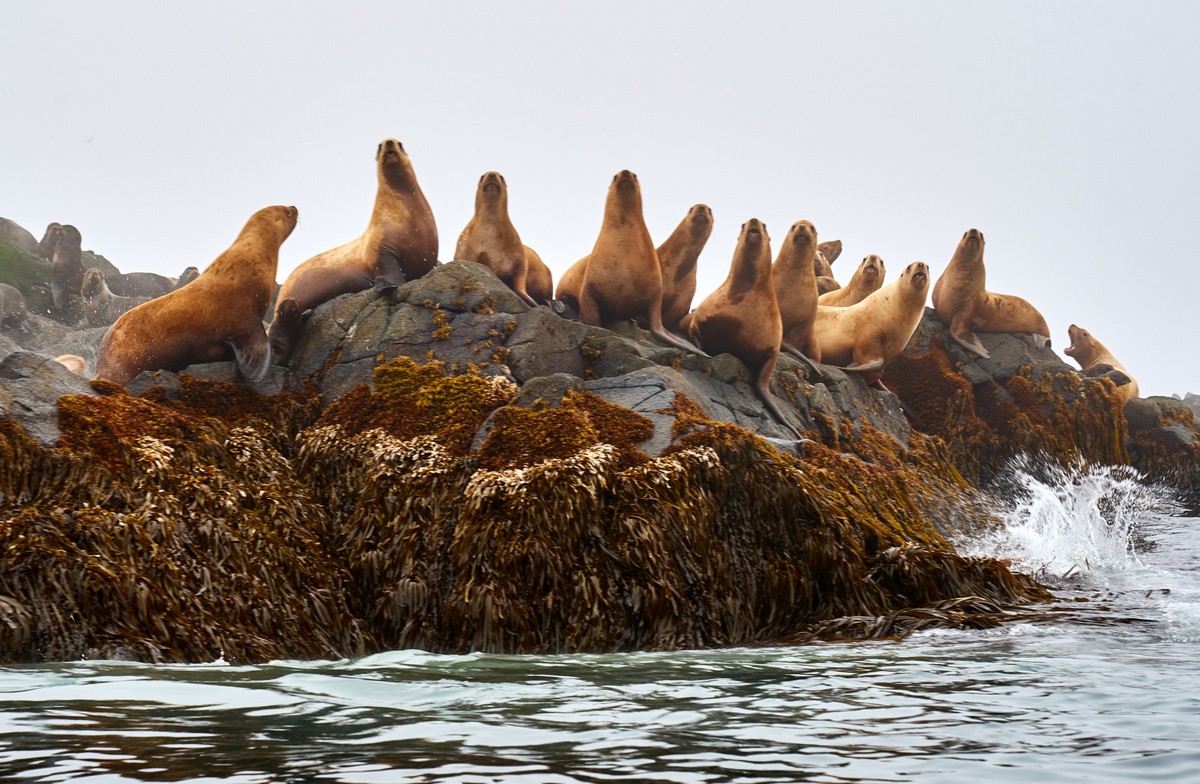 But their cute little faces make up for all the stench ).

They can be modest: 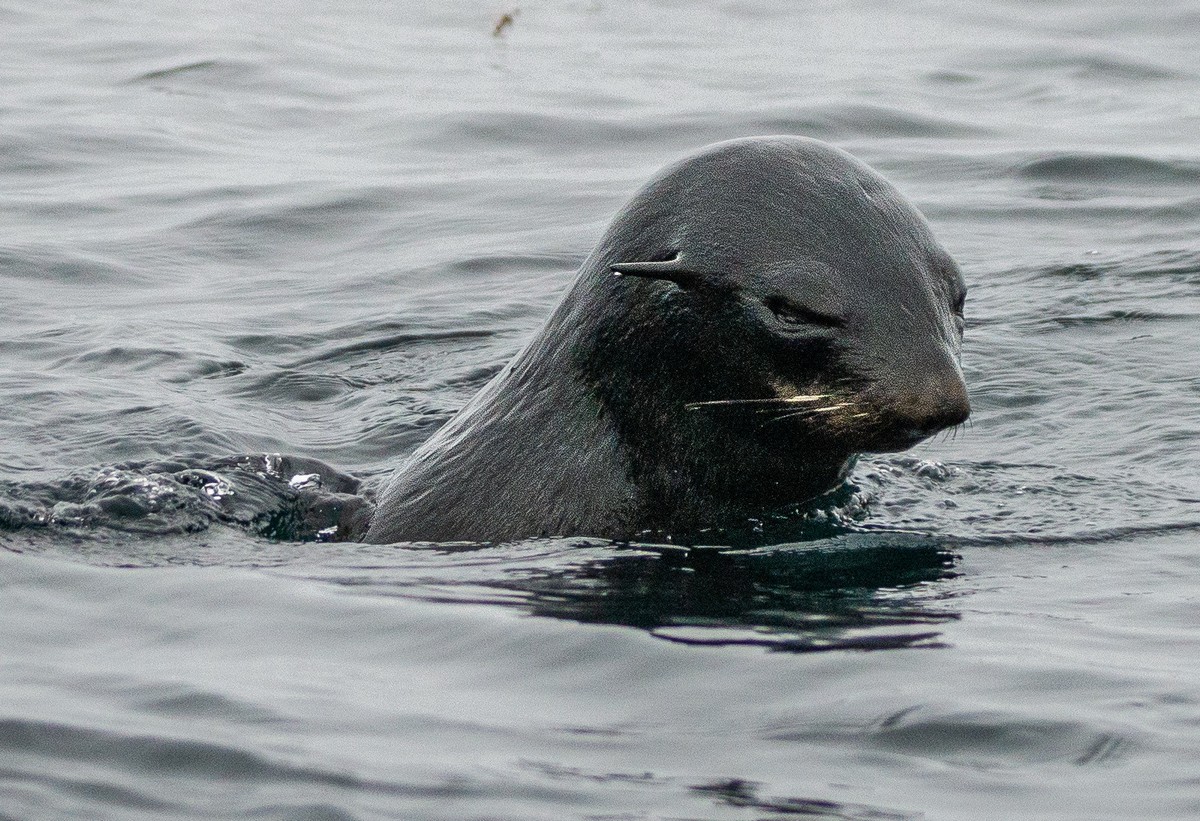 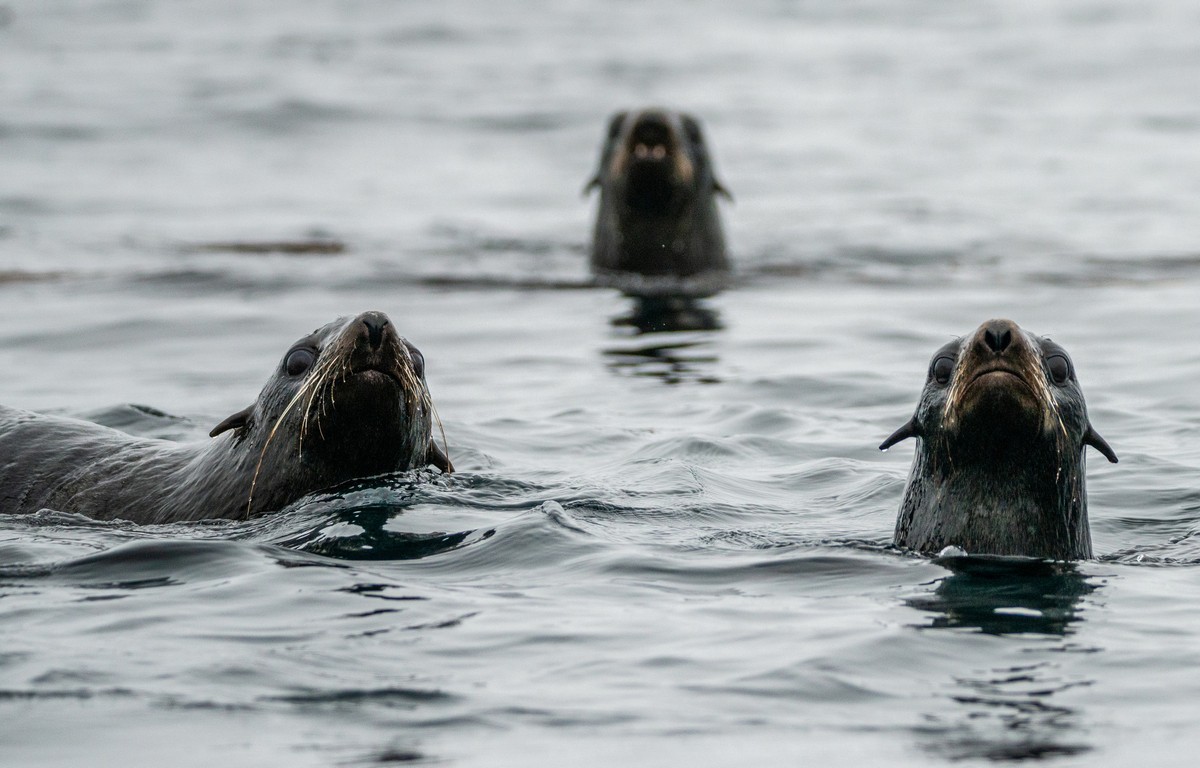 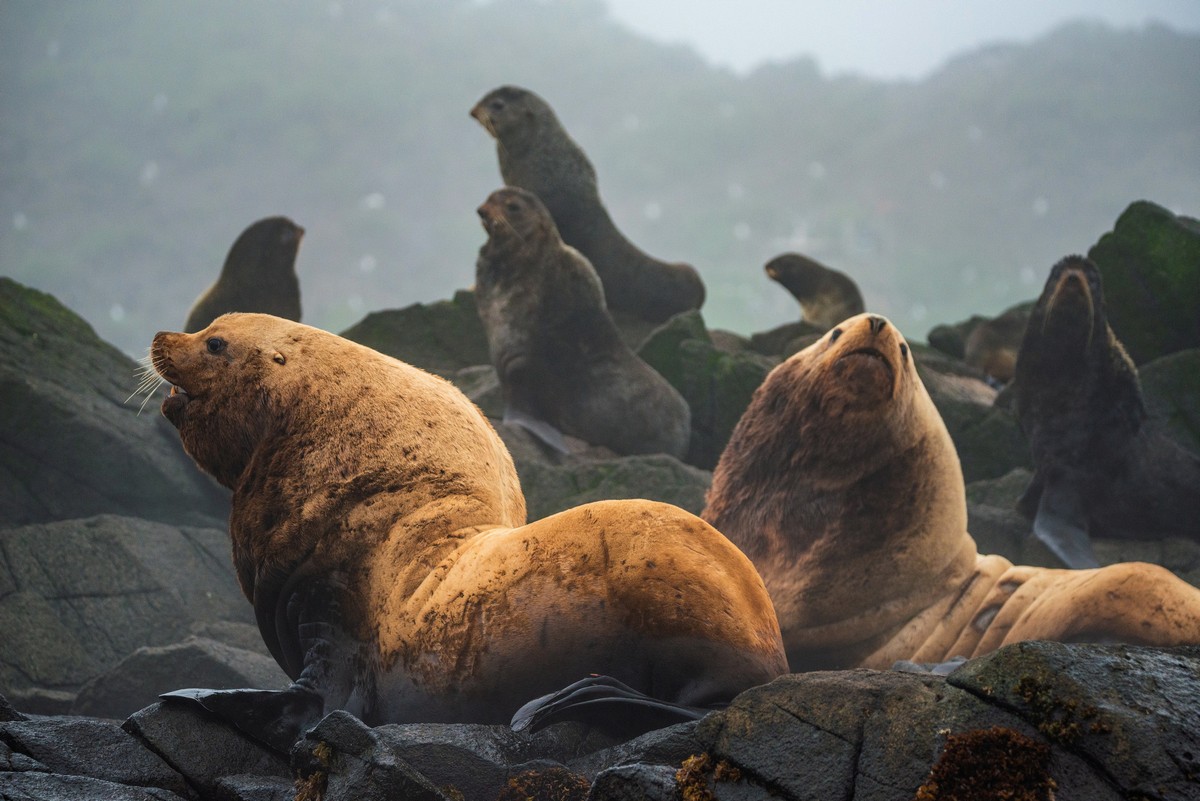 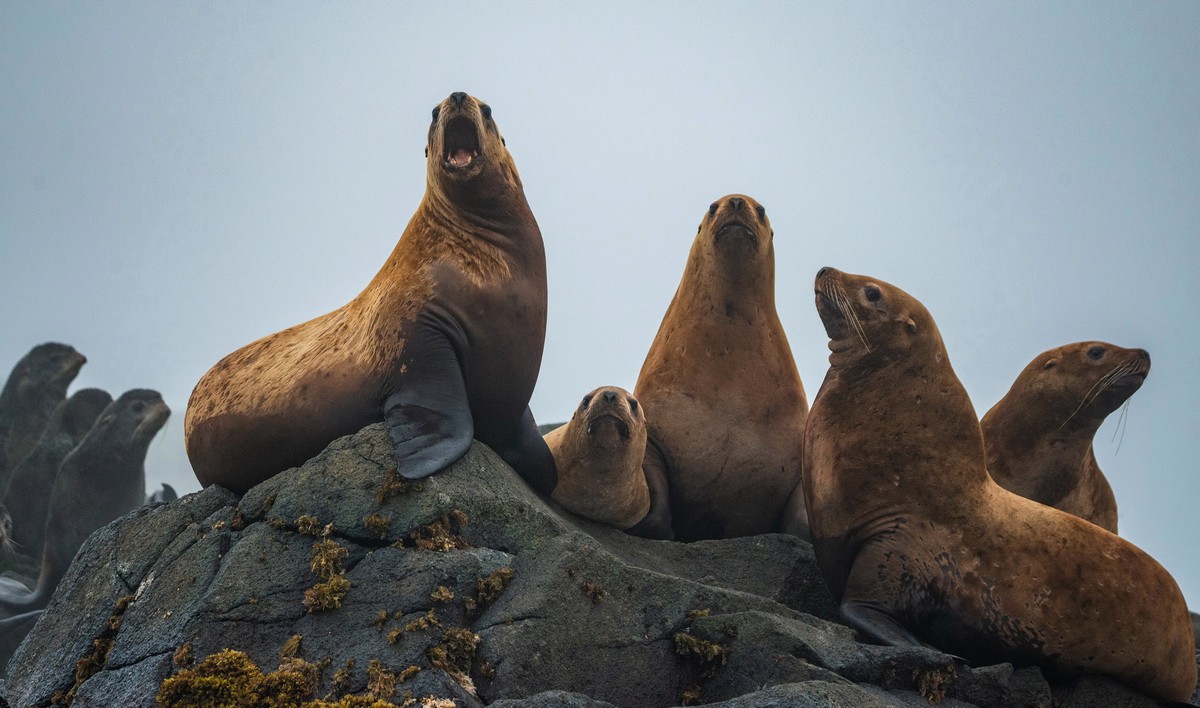 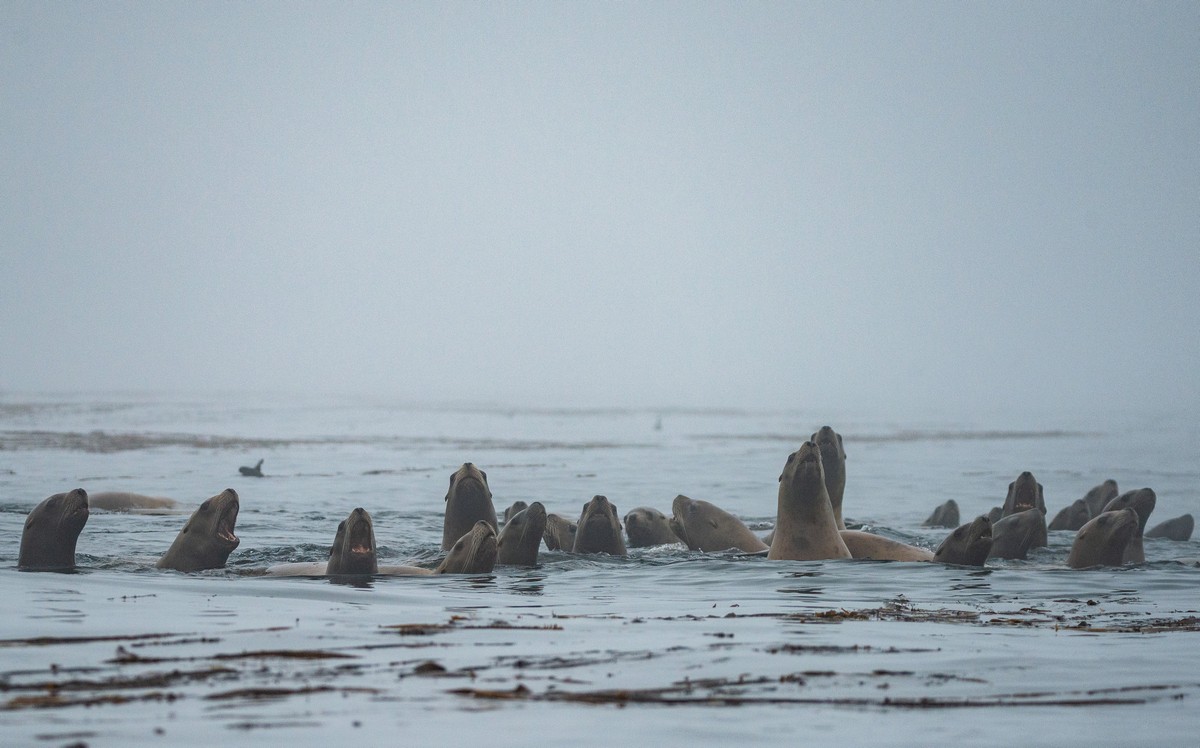 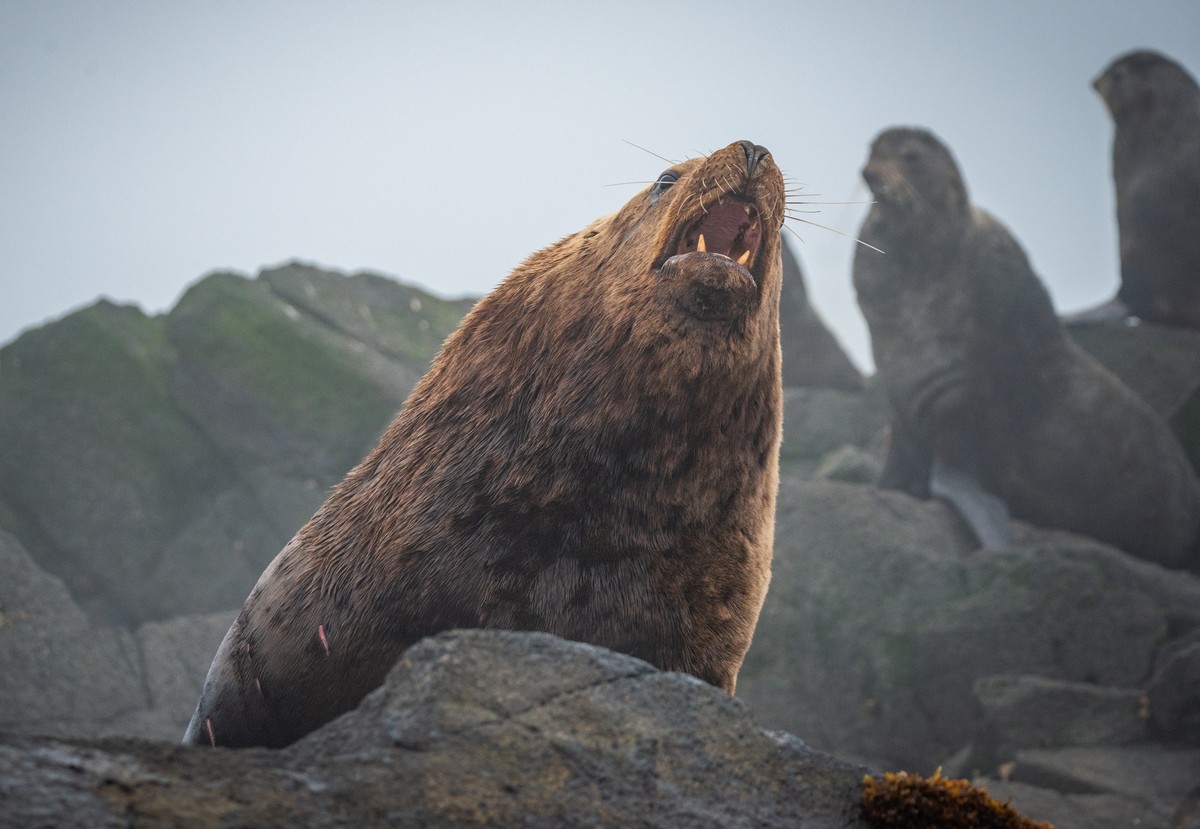 Check the girth on this one! Makes me feel a lot better about my body shape ). Sharp teeth, and swim like a torpedo: do not annoy! Standing proud – the man of the house: 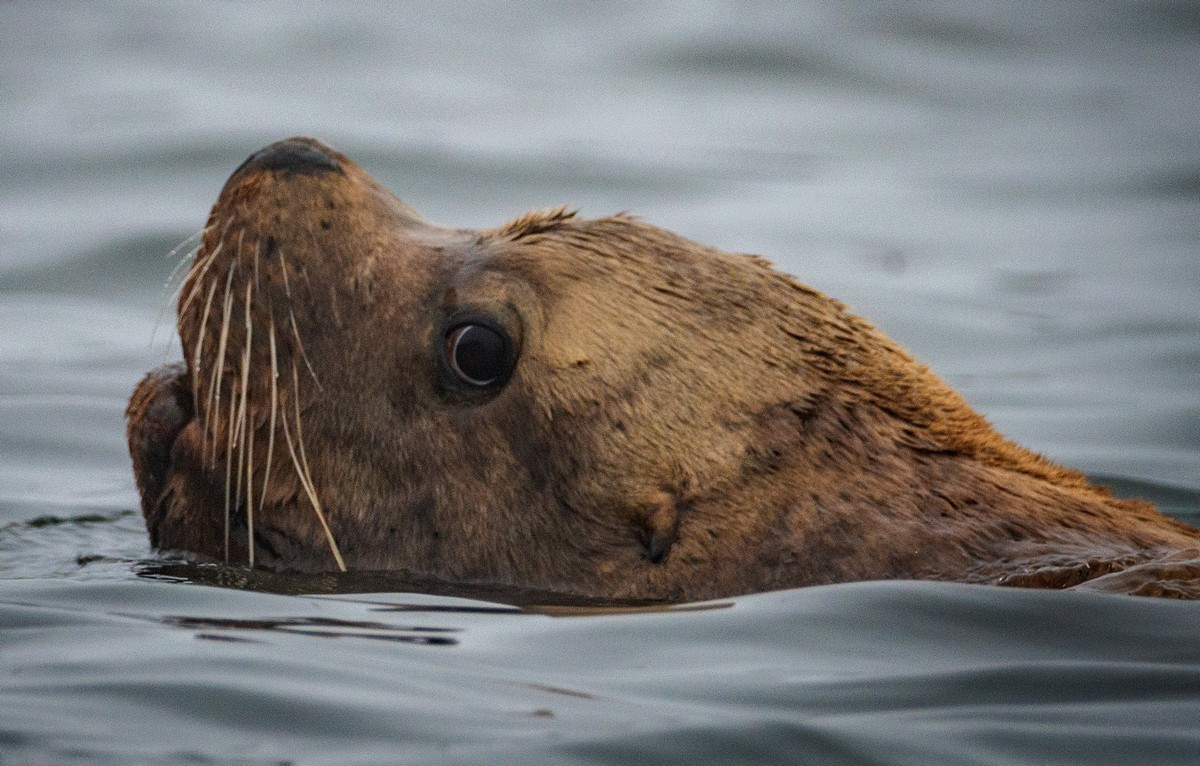 Across the bay – his many wives anxiously await his return!

Like I say, a seal-paradise. Moreover – no polar bears, no grizzly bears (they’re more than 200km to the north), and killer whales I’m sure don’t pose too much of a threat. So yes – paradise. But for one thing… 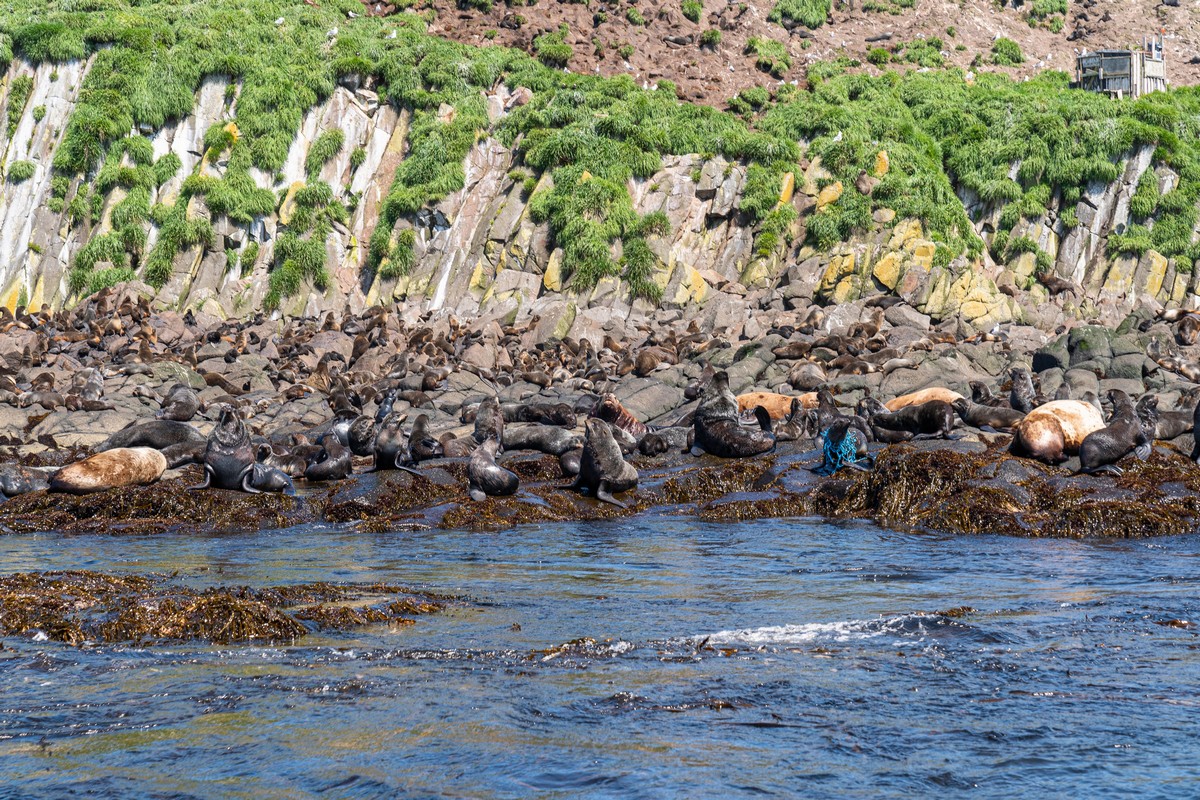 Yes, if you look closely – plastic. ‘Technological progress’ is what we Homo sapiens call it. Not sure the seals agree. We should be ashamed of ourselves (. 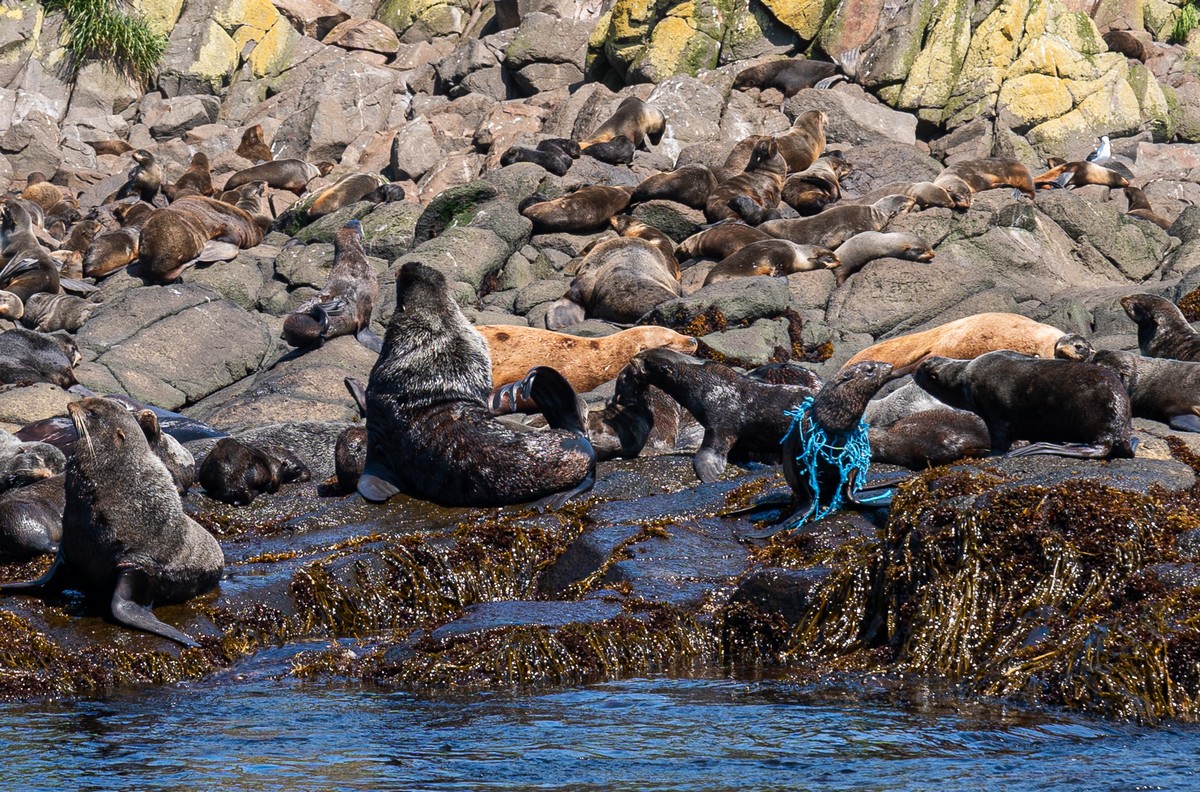 That poor seal can’t escape that there scrap of discarded plastic fishing netting. So it rubs and rubs until the poor seal bleeds and then – worse.

It reminded me of something I was told while on the Galapagos Islands, particularly – about boobies! Apparently, ornithologists studying them would place different colored rings on the birds, to keep track of which were which or something like that. But an unexpected – positive (not-half!) – effect was that the colored rings made the boobies even more attractive to the opposite sex, meaning they actually got more sex!! Alas, I doubt such a happy accident applies here to that there seal (.

Meanwhile, olly_ru put on her wetsuit, and dived into the icy sea! 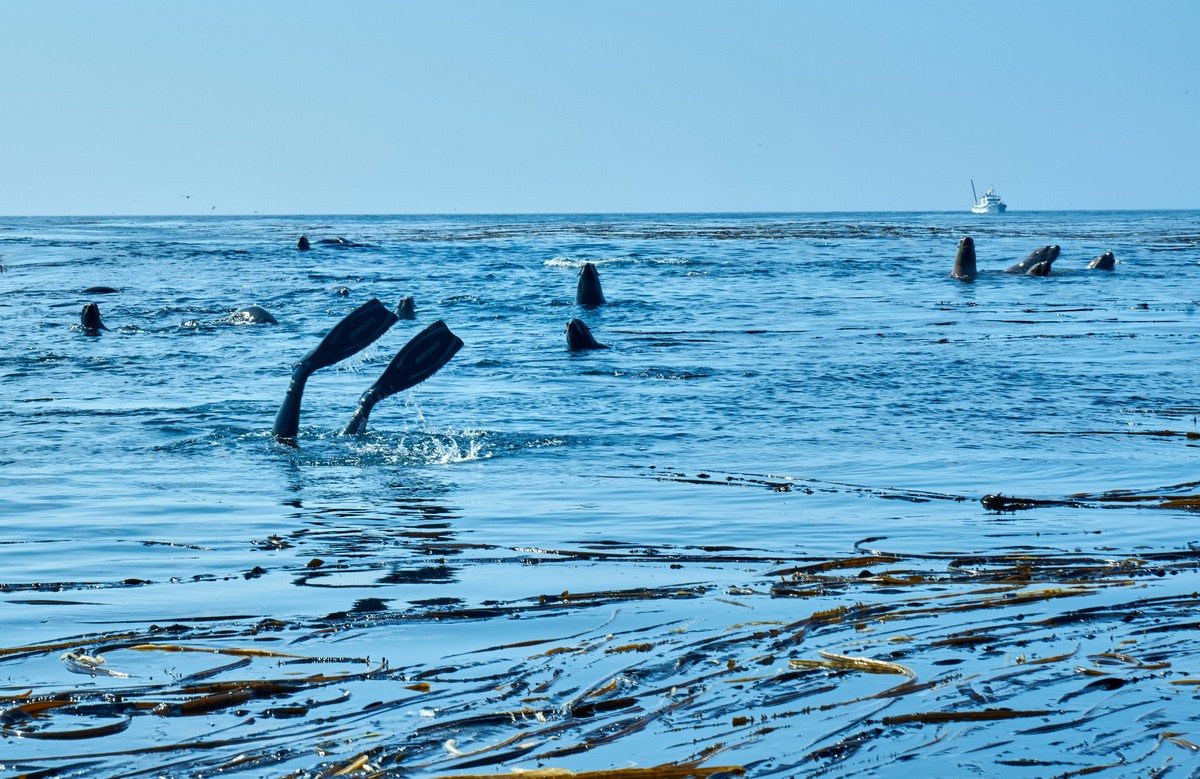 It’s one of her hobbies – freediving. And the setting here was perfect for it too – nothing too prickly at the bottom of the sea, just friendly seals bobbing to and fro…

One of the big alpha-seals took a particular interest in olly. But she simply uttered a few secret words to him, and he about-turned and swam off! 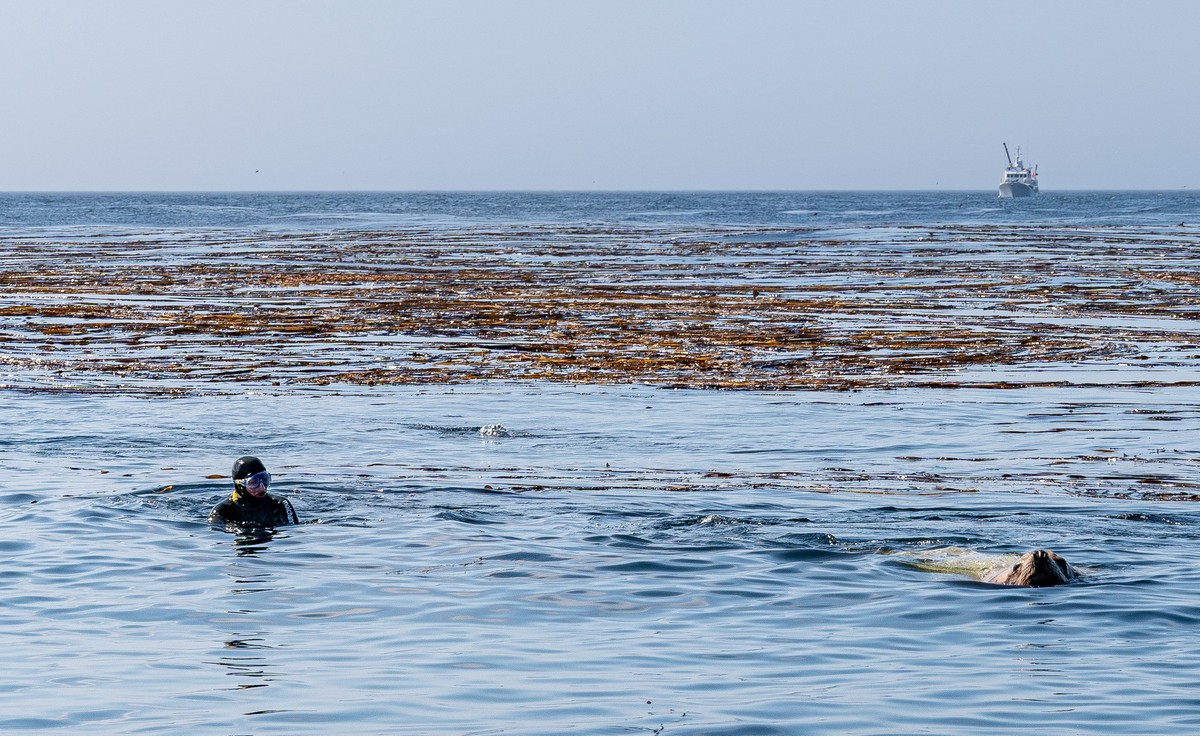 After losing sight of olly for a few desperate minutes, we eventually find her and help her up onto the Athens.

And that was that – we slowly move out of seal paradise to sail further south. But those weren’t the last seals we saw – by any stretch, as you’ll see later… 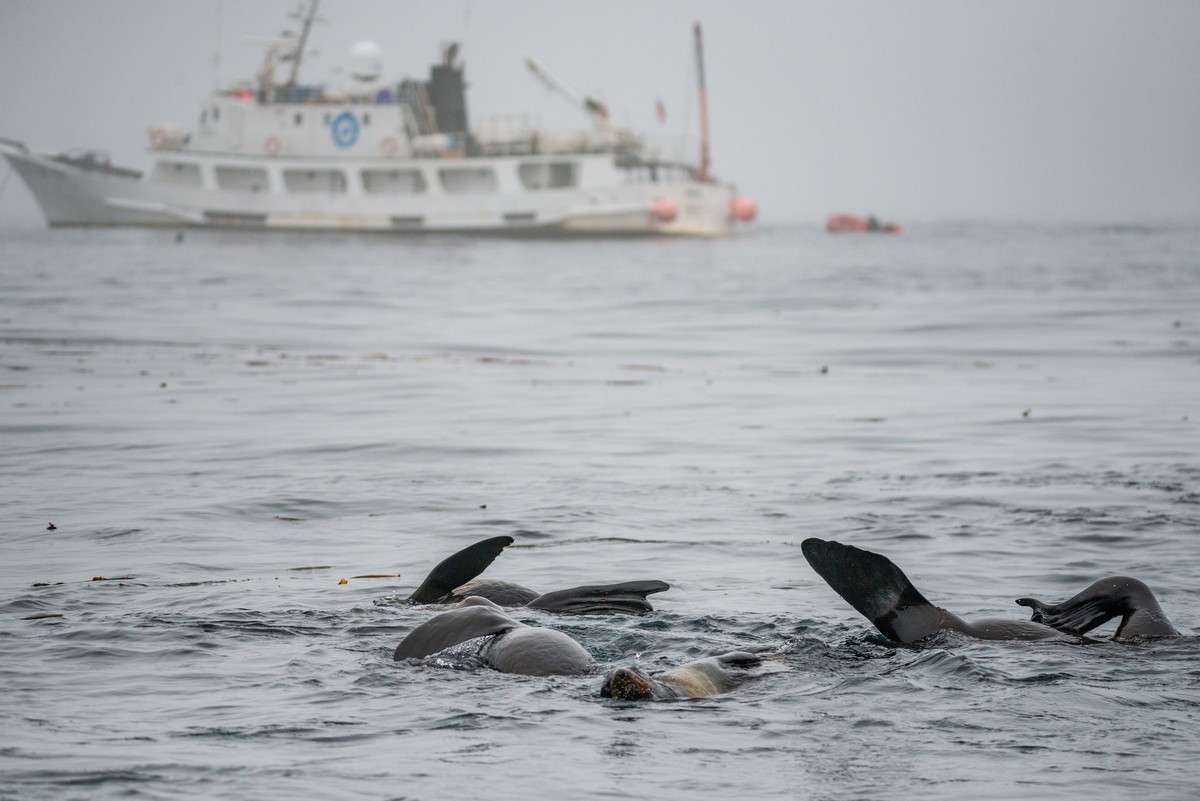 All the pics from the Kurils are here