Here we were – in the sunny Galápagos islands, after having flown in from the mainland and boarded the small ship we’d be on for the next seven days. And like I’ve already mentioned, on every one of those days we were treated to one large extraordinary Ecuad-awesomeness, plus several smaller ones. But let’s start with day one, whose main Ecuad-awesomeness was – the blue-footed booby!

Before your imaginations get the better of you, here are the boobies:

Oh my gaudy! No Photoshop here folks: those paws are for real! I couldn’t believe it either when I first saw pictures of them (incidentally – many years ago; and I’d wanted to see them (and their famed ‘courtship dance’) in the flesh ever since).

Well we secured ourselves a viewing of this dance, and it really is something. Basically the birds stand in front of one another and start lifting their blue feet up and down one by one, apparently to show the mate – or potential mate – just how bright those feet are: the brighter, the better. Why better? Well, they make them brighter by eating better, apparently, so the brighter the feet – the more attractive the bird. So… basically just like practically every other species on the planet? Sure. Only no other species sizes up their potential love interests quite like the blue-footed booby. And it’s such a cute spectacle of a dance that humans observing it start mimicking the moves spontaneously ). 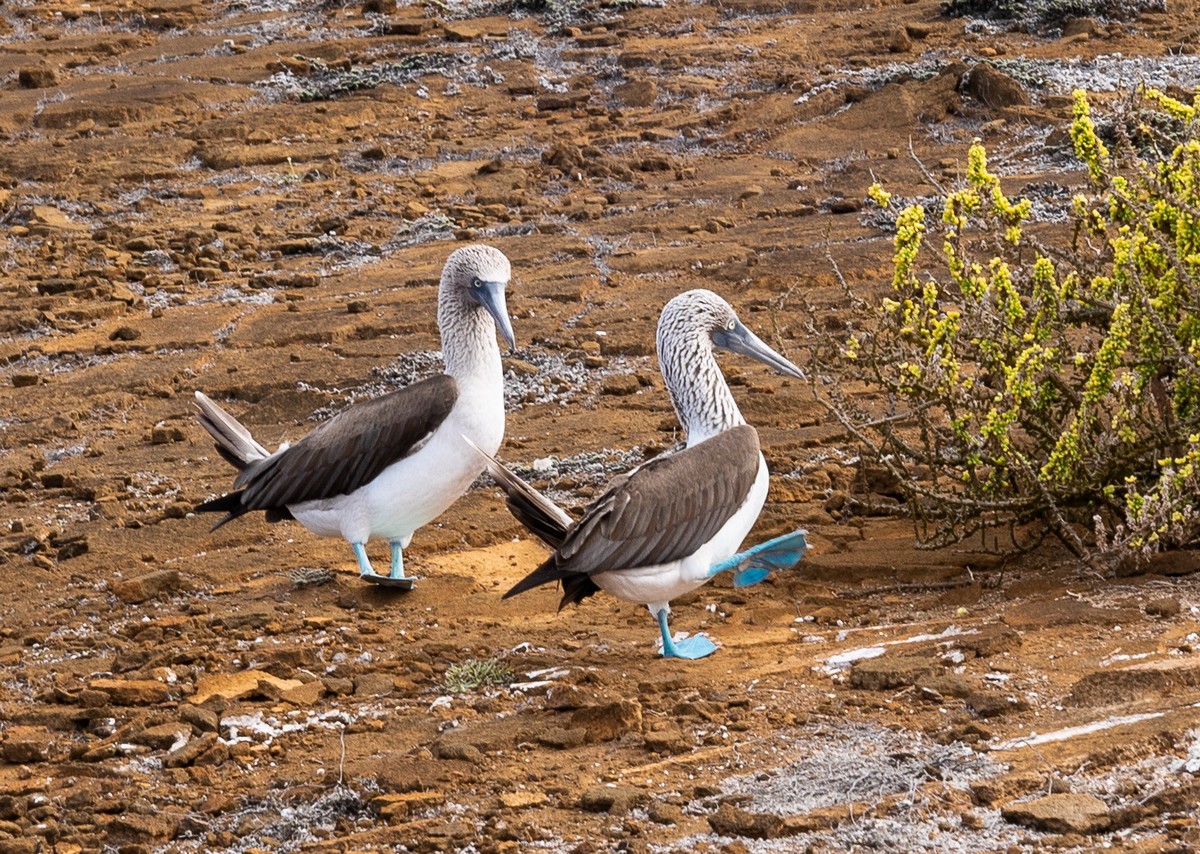 But it doesn’t stop at a strutting ritual; there are sounds too: the male kinda whistles, while the female responds with sharp, somewhat unpleasant, screeches; in fact, that is the only way the locals can determine what sex a given bird is. Wait; there’s more: there’s a great deal of head-bobbing goes on, much ostentatious spreading out of the wings, and plenty of twig tossing at one another (kind of ‘look, twigs – let’s build a home nest together!’). In short: an Ecuad-awesome show!

And when such a show is put on for you by kindly obliging boobies, just a few meters from you, well, the spectacle is even more special. And the boobies themselves carry on with their courting ritual completely ignoring the spectators, their hushed chatter, and their noisy cameras. 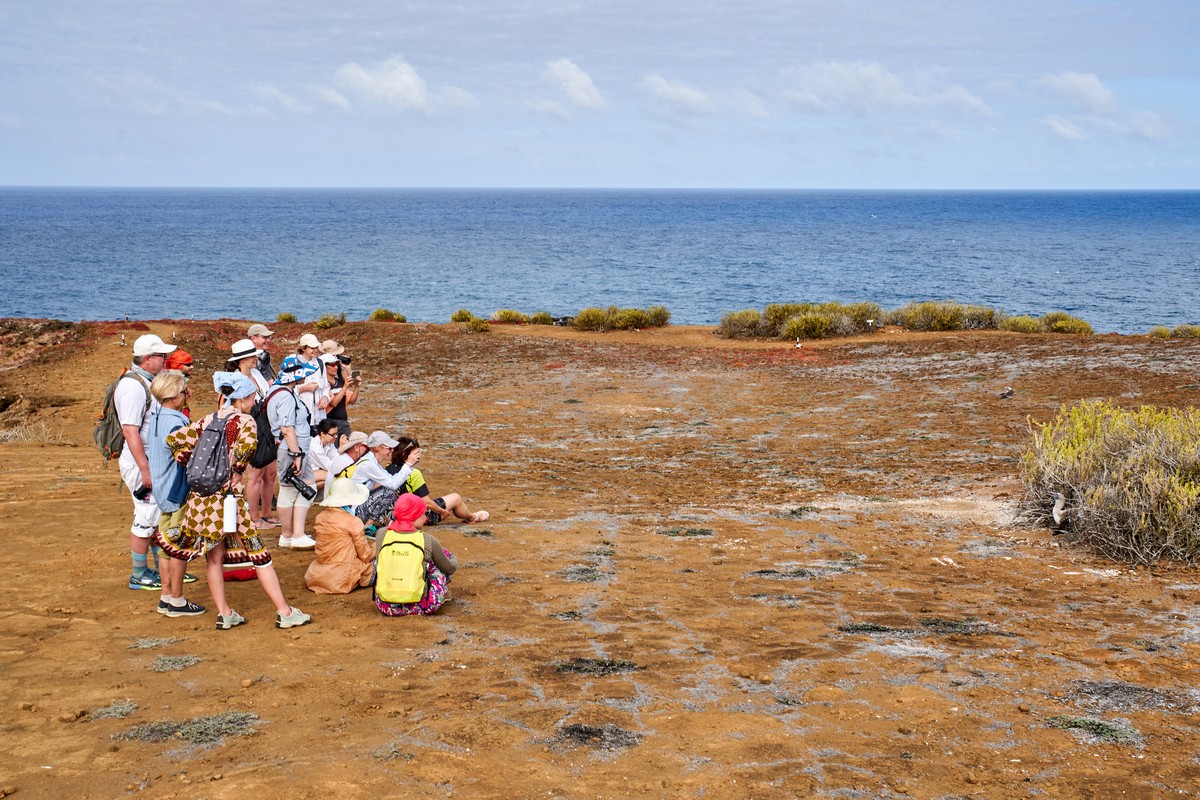 Here’s a video of the love dance:

The boobies live on the land, but feed themselves out at sea. And boobies catching fish is another spectacular spectacle. They hover up above, peering down to see where all the fish are at, then dive down, in for the kill. The internet says these dives can be from up to 100 meters up, reaching 100km/h, and shooting them 25 meters below the surface of the water. I wonder how they can see anything so deep? Also, imagine the force involved hitting the water at 100km/h! Well, the locals told us (and the internet later confirmed) that boobies have some special air cavities at the front of their skulls to prevent then from getting concussion of the brain!

Petrovich spent ages trying to get a video of a booby underwater on one of its dives. And his patience paid off!

By the way, there are birds like these that have red and gray feet, but more on those later.

Now a little about our Ecua-tour schedule for the week…

Every morning at 7am a jolly tune would play through the ship’s PA system to signal it was time to be up. 07:30: breakfast. 08:00-08:15: the first group boarded the dinghy to get them to the shore. ~08:30: the second group into the dinghy and to the shore. Once ashore, it was walkies, bathies, snappies, etc. for around three hours, then it was back to the ship for lunch. After lunch – back into the dinghy and ashore at a different spot for a different afternoon experience. And it was pretty much like that every day: 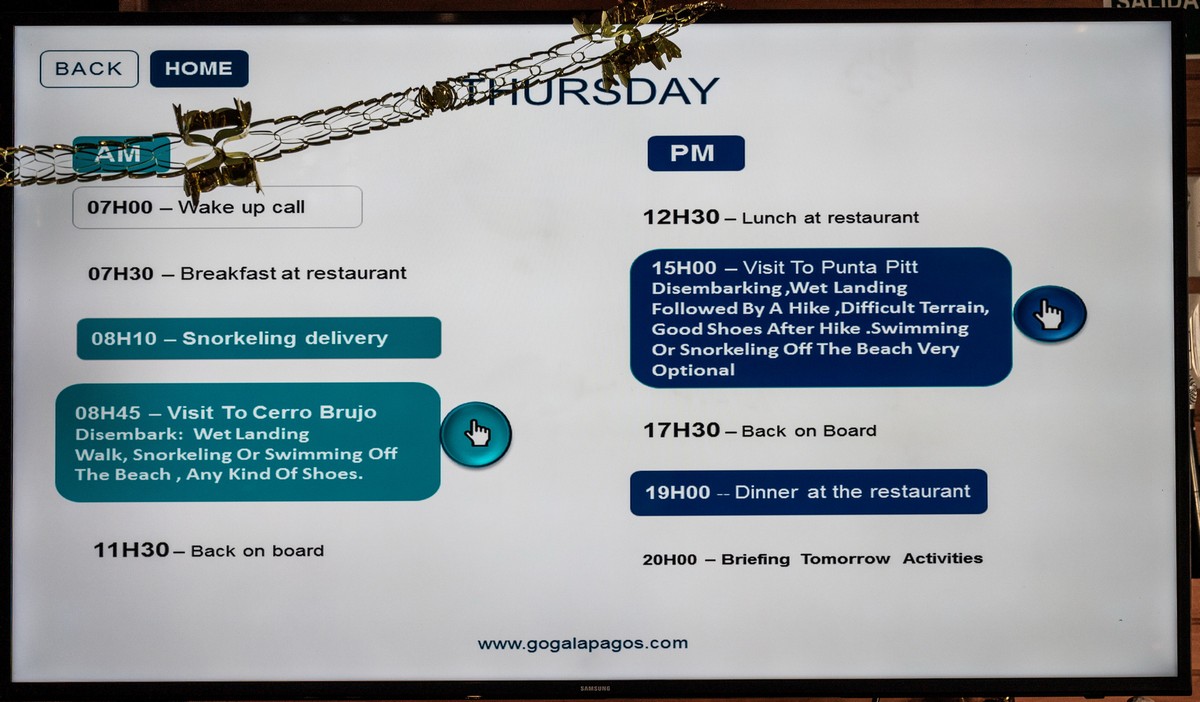 Regarding the time, things were a little… specific to the location. Galápagos time is one hour behind that of mainland Ecuador. Now, since many in our group would rely on their mobile phones to tell the time here, many of said phones switched to local time automatically. This caused much swearing and ill-temper when some among us realized a little too late for comfort that they were an hour behind the dinghy’s daily toing-and-froing schedule!

These were strictly taken along footpaths (remember: protected ecosystem and all); we only once had to clamber up a steep hill; that was the hardest bit of all our walkabouts ). 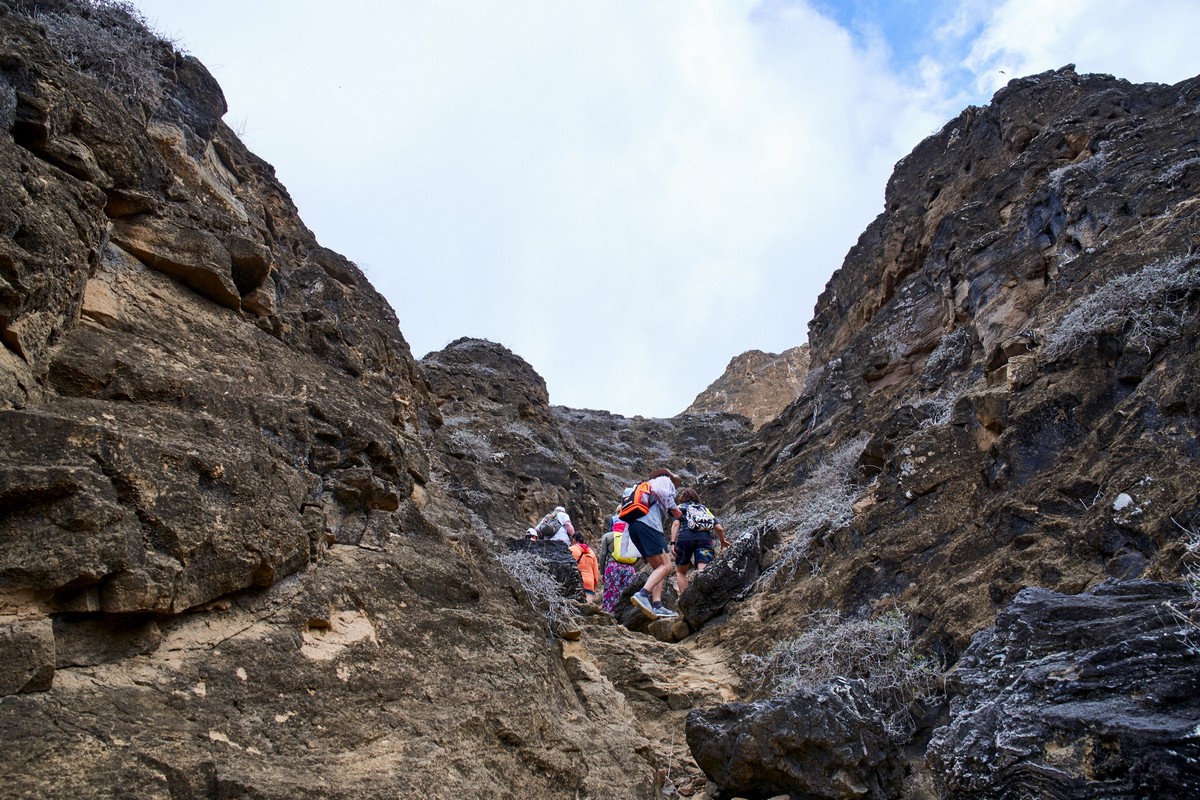 All the paths are clearly signposted and with persistent reminders not to veer off the paths: 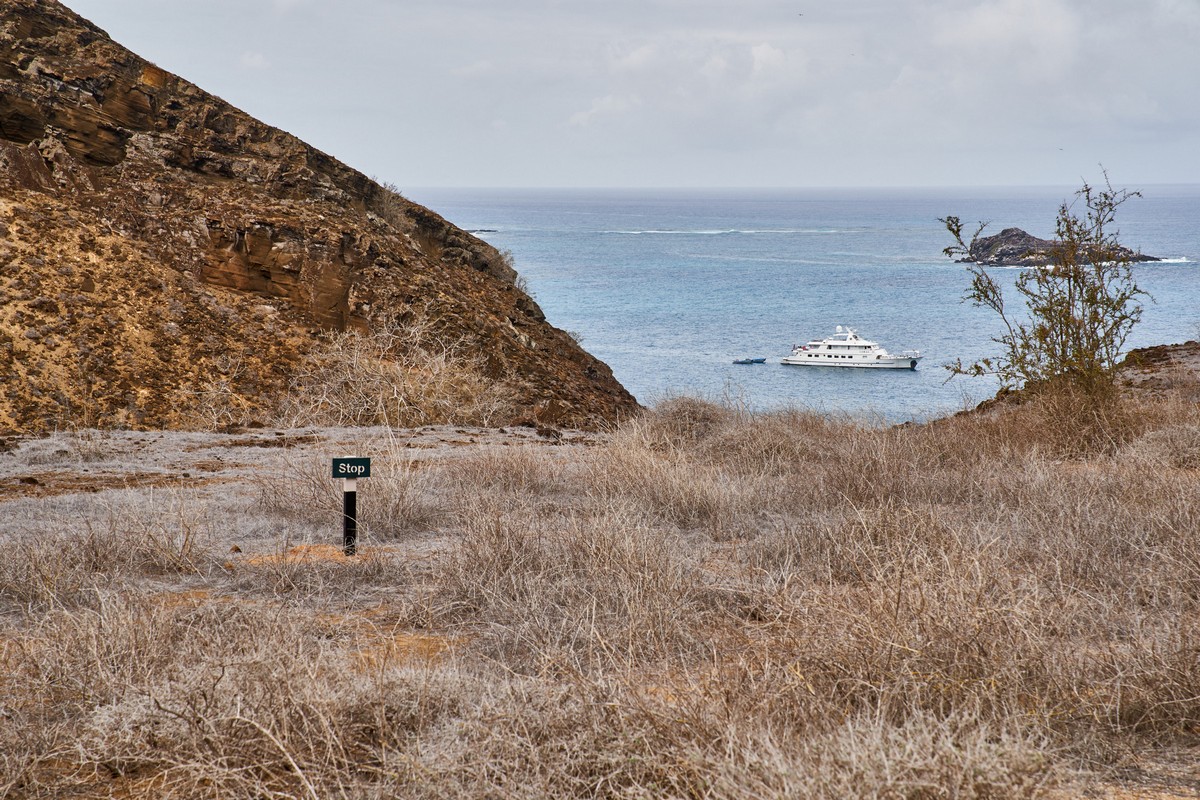 The paysages – very volcanic; just how I like it ).

And here they are – red-footed boobies! These beauts live up in the treetops. 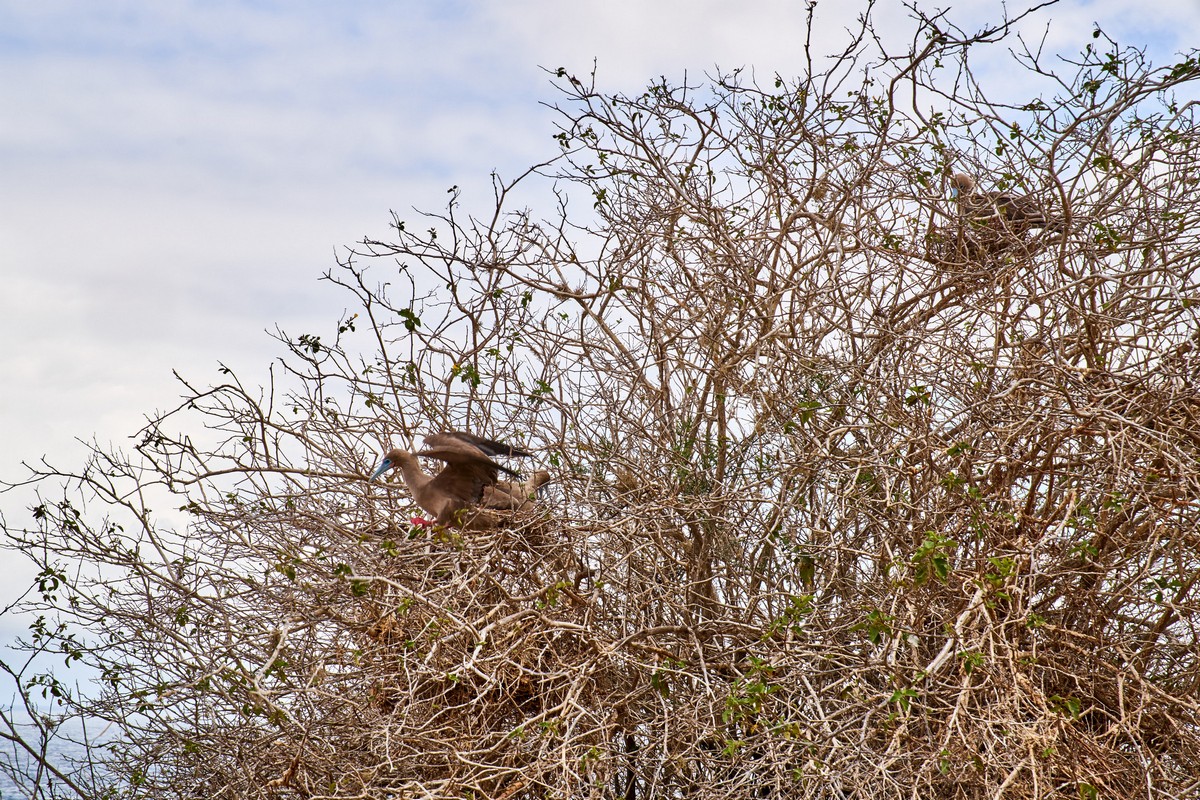 And that’s how we’d have our walkies for a few hours of a morning. Strolling, gawping, snapping, swimming, and working up our appetites for luncheon. Simply super!

PS: Just in case, this place was Punta Pitt, in northeastern San Cristobal.

That’s all for today folks. But I’ll be back with the next Galápa-gosh installment tomorrow…