The other day I finished reading the book Sapiens: A Brief History of Humankind, by Israeli historian Yuval Noah Harari: an accessible and at times blunt and cynically portrayed history of mankind. It starts with the appearance of our biological species, its spread across the world, its complex journey through all kinds of pan-human revolutions (cognitive, agrarian, and various technological ones), and ends in the current era. At first the book appears to be a solid popular-science work on a par with Guns, Germs, and Steel or The Journey of Man: A Genetic Odyssey. However, as you progress through the pages, nagging doubts start to form in your mind; then at times comes amazement at some of the inconsistencies; then it gets like… totally… WHAT? But I’ll get to that in due course… 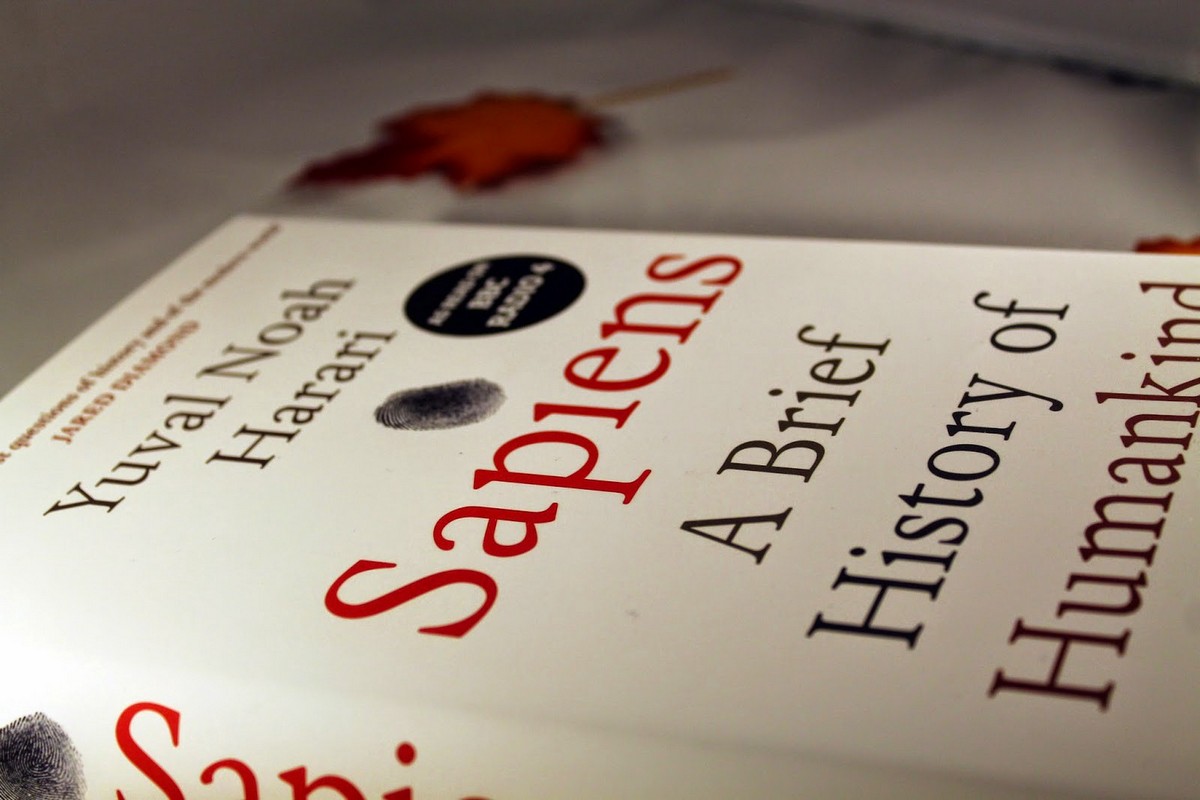 Actually, a lot of the facts given in the book have been known for ages. Some we learned in school, others in books we’ve read, yet others in anthropological documentaries or news from archeological digs. However, for me, up until now all that seemed to be stored in my brain in separate bits. Only after reading this book has it all come together as one. So respect is at least due there.

Now, everyone’s heard of Neanderthal man and Cro-Magnon man (our ancient ancestors), and that they lived around the same time and often on neighboring territories. But there were also other Homo species. For example, the Denisova hominins, and the hobbit-like Homo floresiensis (Flores Man) from the Indonesian island of Flores. And there will have been many more, no doubt, which have yet to be discovered. Curiously, many of them disappeared relatively recently: Flores Man, for example, lived around 12,000–13,000 years ago; Neanderthals – between 30,000 and 40,000 years ago.

This means that the definition of homo, or ‘human’, in actual fact doesn’t refer to just folks like you and me. It turns out there are a dozen other biological species that add to that full definition, all of which died out; and Wikipedia agrees with this. We (Homo sapiens) lived together with these other human species at the same time and in the same geographical areas on the planet, and we even crossbred with them (as confirmed by genetic research). Then those other species disappeared, while we stayed. That is, Homo sapiens overcame all its ‘competitor-relatives’ – completely destroying them at the very roots, all to free up for itself an ecological niche to provide for its own sustenance, propagation and further expansion.

But it wasn’t just other human species Homo sapiens wiped out.

END_OF_DOCUMENT_TOKEN_TO_BE_REPLACED

Over the New Year holidays a group of friends and I headed down to Ecuador for our traditional festive portion of unusual/active/exotic trekking/volcanism/photography. As usual, it was ‘active tourism until you drop’, cramming in as much we possibly could. Anyway, I’ll be writing blogposts on the trip – coming up shortly, but in the meantime I’d like to share with you a personal achievement I’m rather proud of – one completing a certain puzzle…

Games/puzzles/toys. They come; they go. Some come and then disappear very quickly. Remember Tamagotchis? They were the biggest toy fad of the 1990s – early 2000s. Kids got so attached to their ‘digital pets’ that some were even driven to suicide when they suddenly broke. No, really.

More recently there was Pokémon. Once all the rage; now – all but disappeared. But there is another category of games that come – and stay. These are the timeless games that are just so darn good they’re not going anywhere. Chess, cards, dominoes… – been around centuries if not millennia, and will be around for millennia to come. Some modern-day games fall into this category of ‘stayers’ too. Not many, but some. Tetris, for example. It came, it became a fad-craze, interest died down a bit, but it didn’t go away. (I remember playing for hours on end on one… until one day I saw ‘blocks’ falling down in front of me in the street; that was when I realized it was time to quit:). The same thing happened with the Rubik’s Cube…

I used to complete this cube-riddle using the standard cross method. Then I mislaid my Rubik’s Cube and mostly forgot about it (like many others did) – for 35 years! Then, just recently, while isle-hopping around the Galápagos – as you do – I recalled I’d packed some Rubik’s Cubes after recently finding them in a store somewhere and purchasing them, so one evening on the boat with not much to do I had a trip down memory lane and solved them. And not just the standard 3×3 model; also the 4×4 and the 5×5: 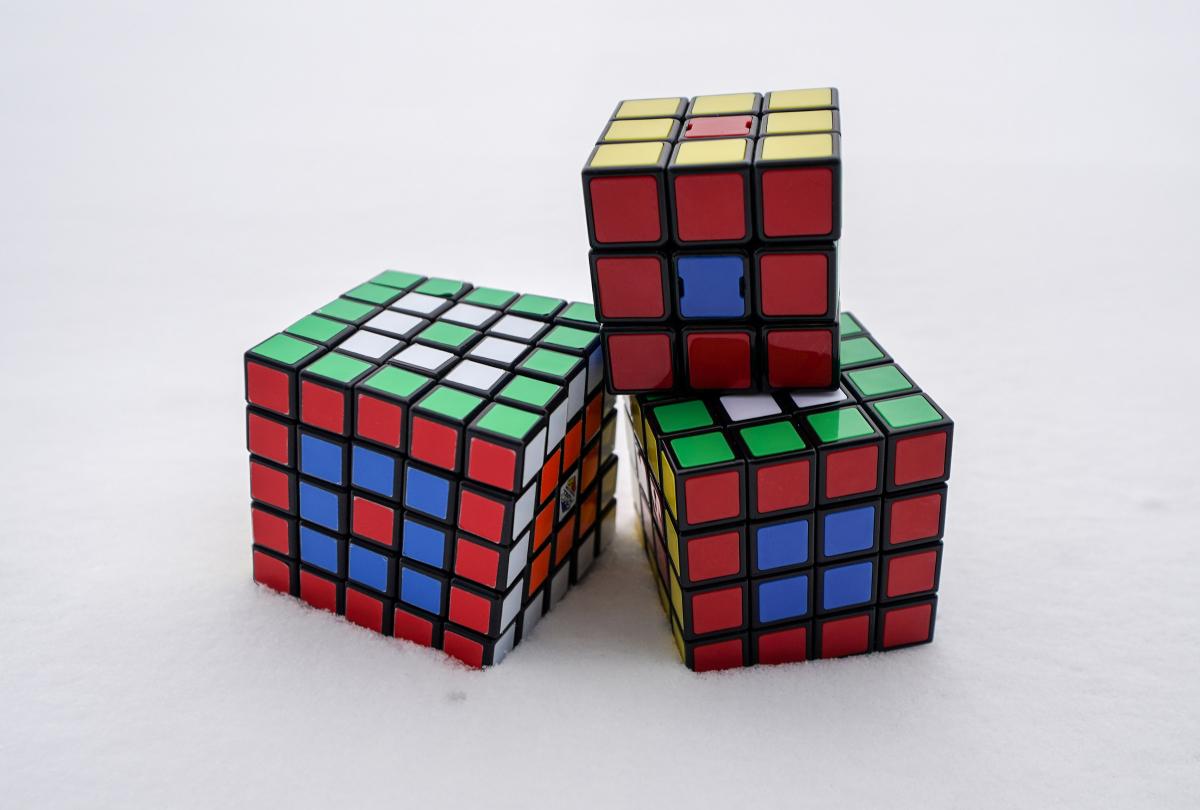 Really glad I packed them. I got at least five other fellow adventurers hooked on the 3×3, while a Rubik’s expert among us told me of a ‘secret’ method for solving the 3×3. Meanwhile, I learned how to do the 4×4 and 5×5. An engrossing, enthralling, entrancing exercise. Highly recommended! Especially in Ecuador!…

It’s been a while since I’ve written anything about our beloved green bear-mascot Midori Kuma – nearly two years in fact. That’s a long time in anyone’s life, but especially in this green bear’s – as his schedule is just so full non-stop all year round. Not that it’s all work-work-work though: just recently he’s been kicking back in full chill-axe mode in the snowy expanses of Russia, no less. Quite why, when he’s often to be found in idyllic tropical resorts, I don’t know, but, well, he is a bear after all. Must be an instinct thing. I wonder if he hooked up with some brown bears while there. But I digress…

Anyway. Since his Russia trip he’s taken up a new hobby: he’s now an artist, as in – a painter. And he clearly is a natural. Just look at some of his early works, below. What can I say? Bright, unusual, and incorporating many different styles. And it’s not just me thinks that. Many of his paintings have been snapped up for vast sums already at auctions around the world… 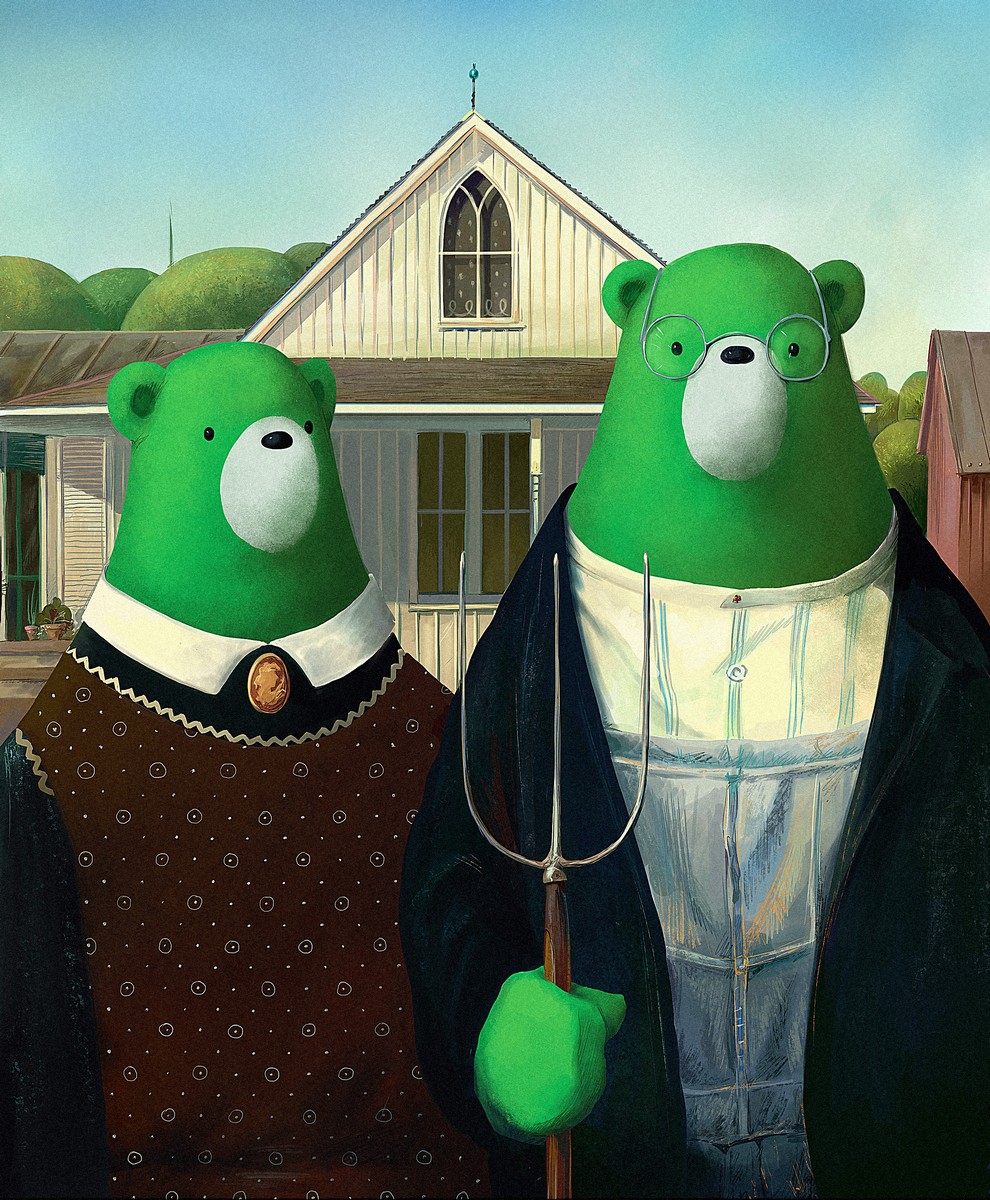