I have a very high opinion of Schindler, the world’s leading manufacturer of elevators and escalators. (Next time you use these modes of transport, take note of the manufacturer’s logo.) In my view, this company deserves lots of respect and its business practices are worthy of study and emulation. However, when I see the company’s booth at an exhibition, replete with slogans like this, it sends a shiver down my spine, I start feeling uncomfortable about the world around me, and my left eye starts to twitch. Why? 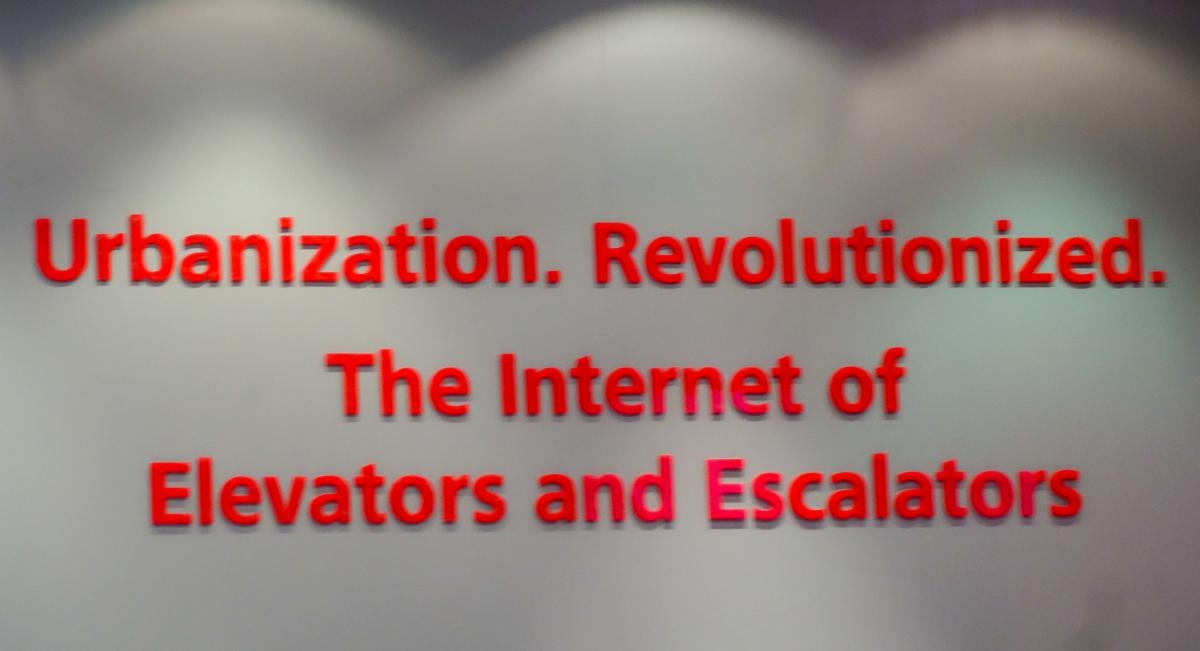 There were three slogans that I had a particular problem with:

If you take a closer look, you can see them in this photo: 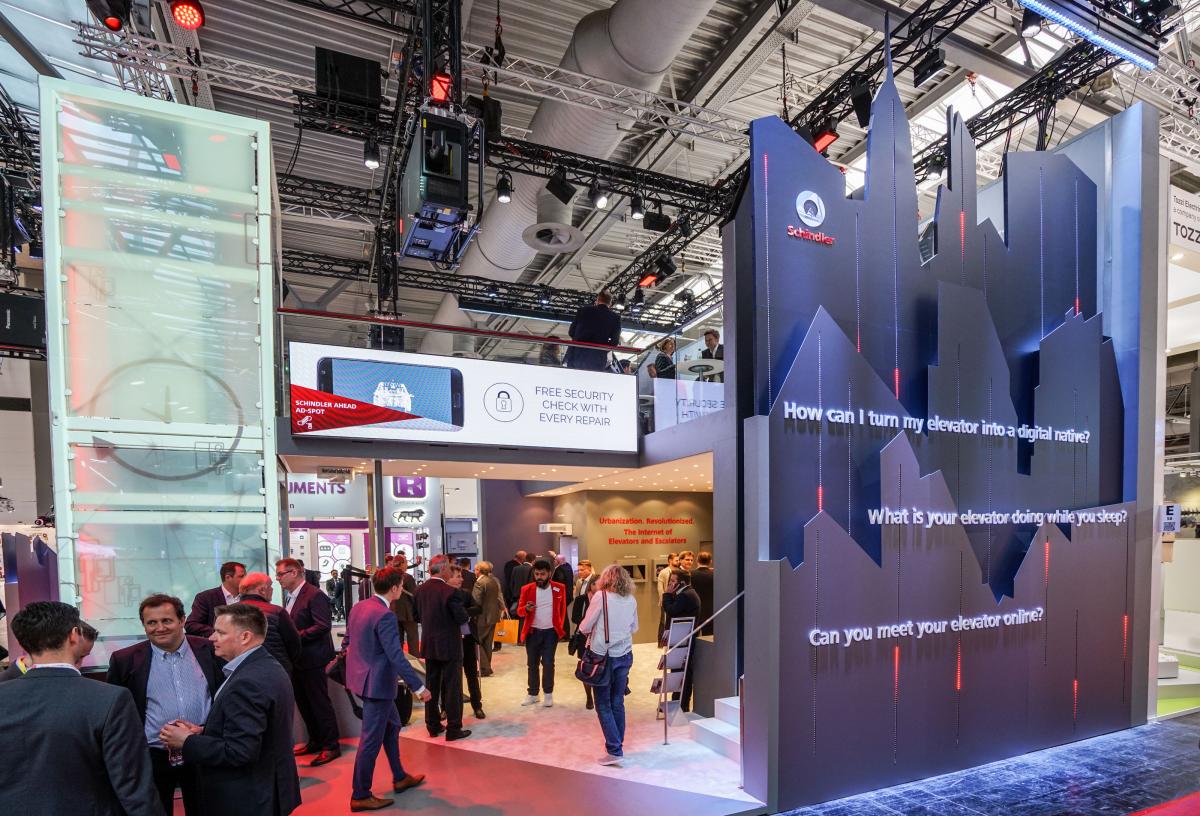 It may not bother everyone, but it makes me a little apprehensive. Of course, you understand… An elevator in the Internet is not as dangerous as the Internet in an elevator! OK, that’s tonight’s nightmares taken care of. No, I’m not trying to scare you. And I certainly wouldn’t want anyone to dream about the elevator from this cartoon!

The venue is Hannover Messe, the yearly mega-exhibition of industrial solutions. It’s all about automation, manufacturing, the energy industry, all sorts of robots, the rarest spare parts and other types of modern industrial magic.

What can I say… it’s pretty interesting! I understand now (though I did have a hunch before) why some of the pavilions in this mega complex of halls and pavilions have railway tracks running through them in places (yes, right through the pavilions!). The scale of some installations is really impressive. I’ll get to that in a bit, but now – welcome to the Hannover Messe! 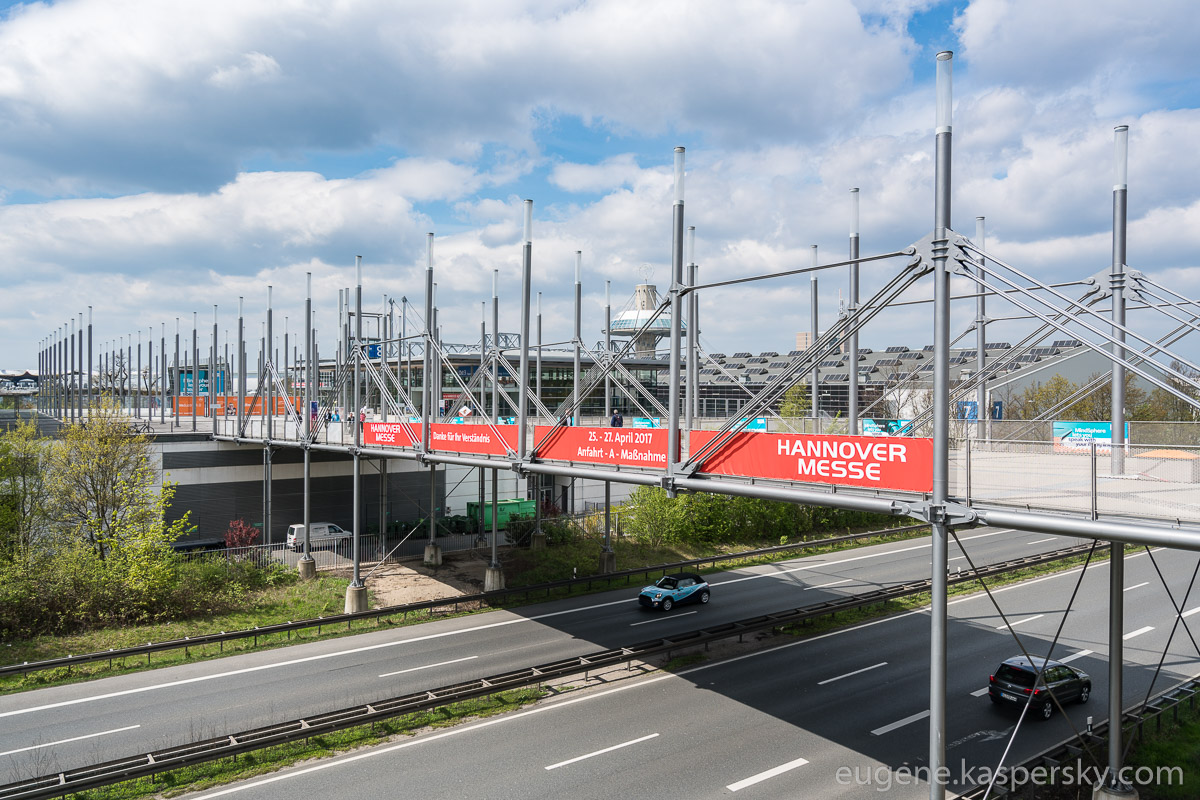 Those of you who’ve never been here before, be warned: the scale of the event is staggering. 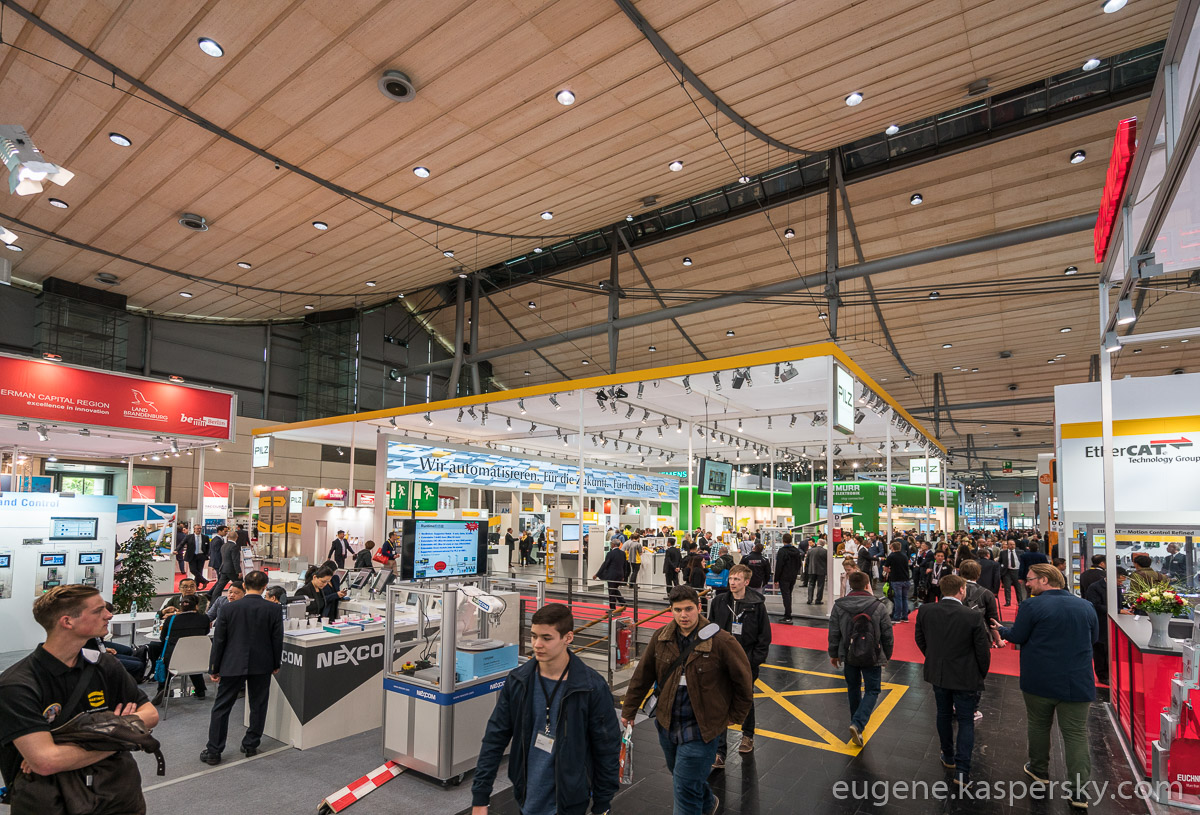 Both veteran giants and up-and-coming industrial newbies are well represented:

You can find small loose items and large assembled ones on show.

This is the place for everything industrial: all sorts of robots, clever machines that revolve and rotate and cut things into tidy pieces, pumps that pump in and pumps that pump out, wires thick and thin, made of copper or not, twisters here and rotators there, spare parts in bulk and per item, gauges for measuring pressure and depth gauges for going down deep, automated cabinets for managing networks and windmills for maintaining volts and amps on those same networks, and so on. No Wikipedia could describe all the comings and goings at this event.

It goes without saying that robots and various industrial automation (Industry 4.0) are all over the place, twisting, turning, demonstrating capabilities, while art installations are built in 3D right in front of you by some robotic arm. Nearby there’s something revolving, shifting and sorting, a little further on cakes are being assembled from spare parts (it’s not actually real – both the cakes and the parts are made of plastic, though the “pastry chef’s arm” is real, made of iron).

And that’s when this idea popped into my head.

What self-respecting exhibition, especially an industrial exhibition, can take place without cars? And of course, they are here too. Like this one: 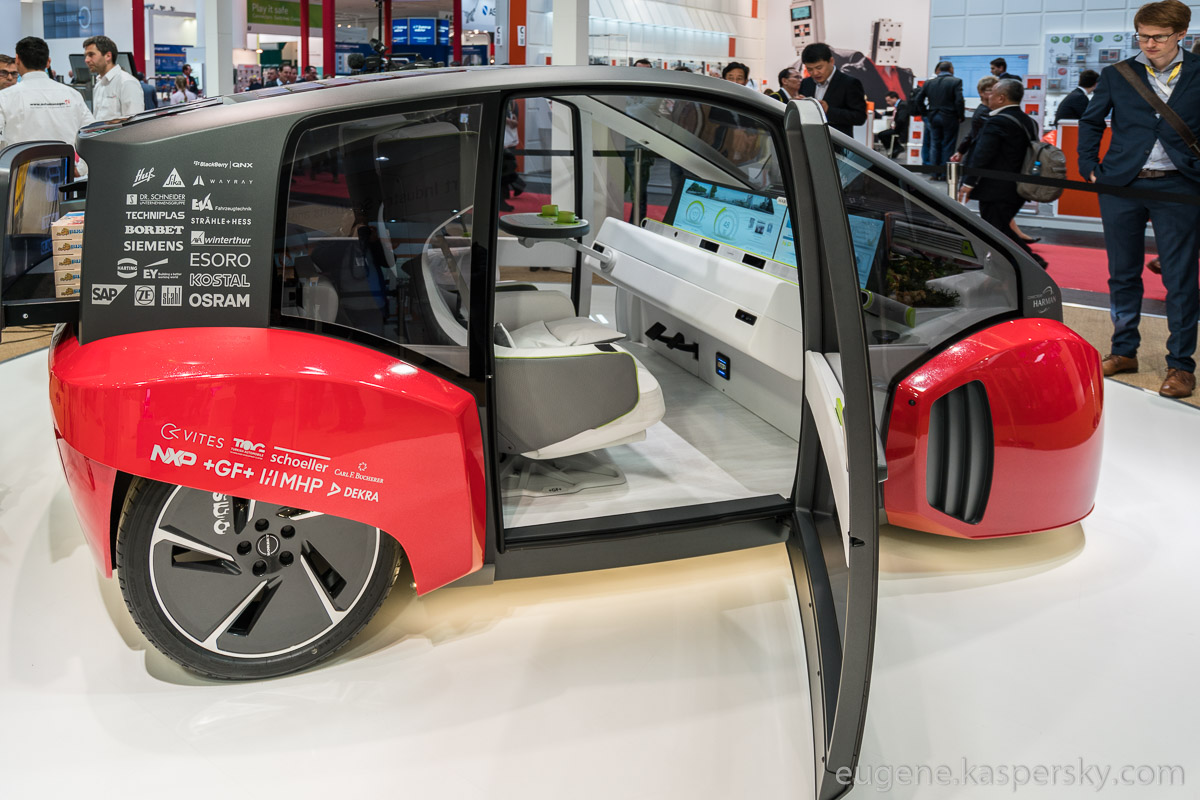 If you look closer, though, this miracle of technology and design is just a pizza delivery vehicle – with boxes sticking out the rear :) 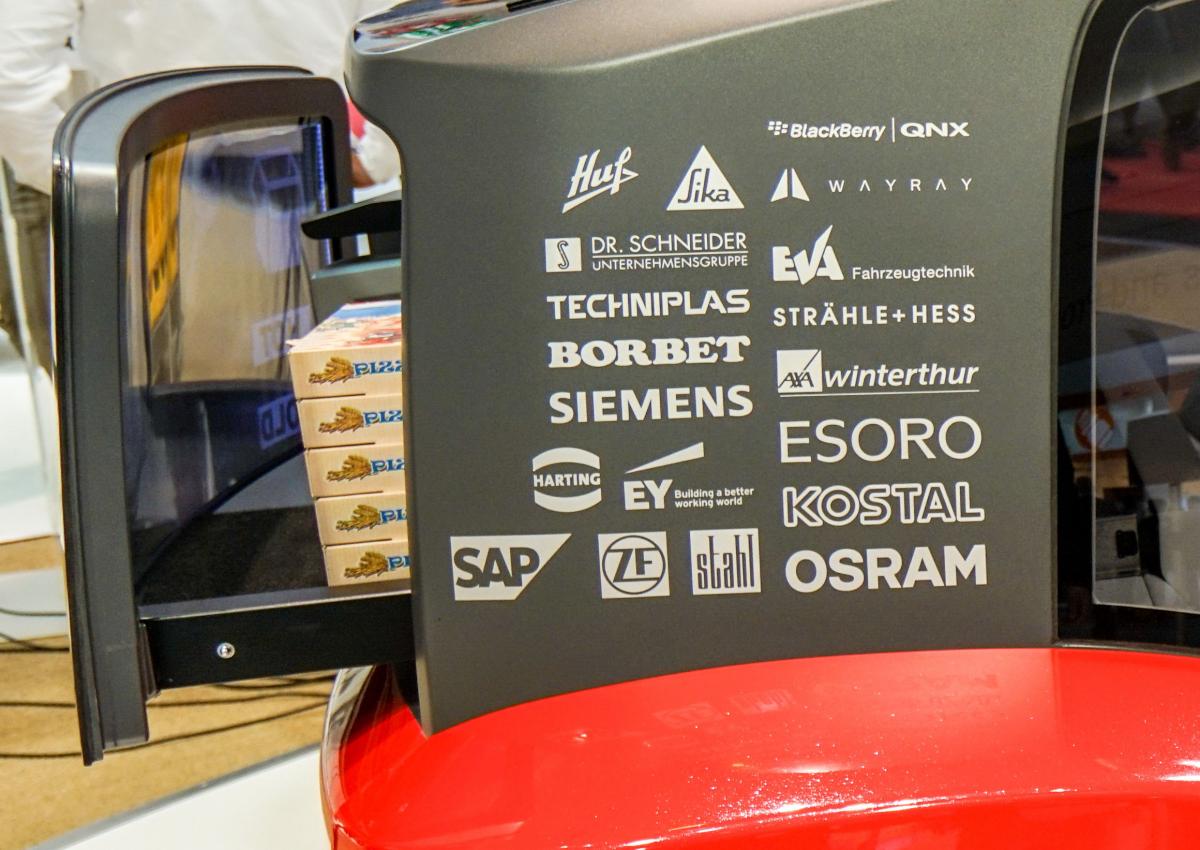 And this miracle machine – wow! 5.5 seconds to 440 km/h. I wonder how the driver keeps from blacking out? Or do they load him in the car unconscious? Or maybe there’s no driver at all. The little black bags on the rear frame are braking parachutes. Cool…

A full-sized wind turbine! Truly breathtaking. From afar, they don’t look as impressive as this.

Somebody has brought an entire jet turbine for the public to admire. Everybody’s milling around, taking pictures, including me…

And I saw these drummers recently at the MWC in Barcelona:

Then there’s that fashionable word “security”, though if you dig just a bit deeper, it turns out to have little to do with what we call “industrial cybersecurity”. In short, our category of security was represented by us alone, with no alternatives anywhere in sight :)

Poland was the event partner, with lots of advertising posters and a large exhibit. 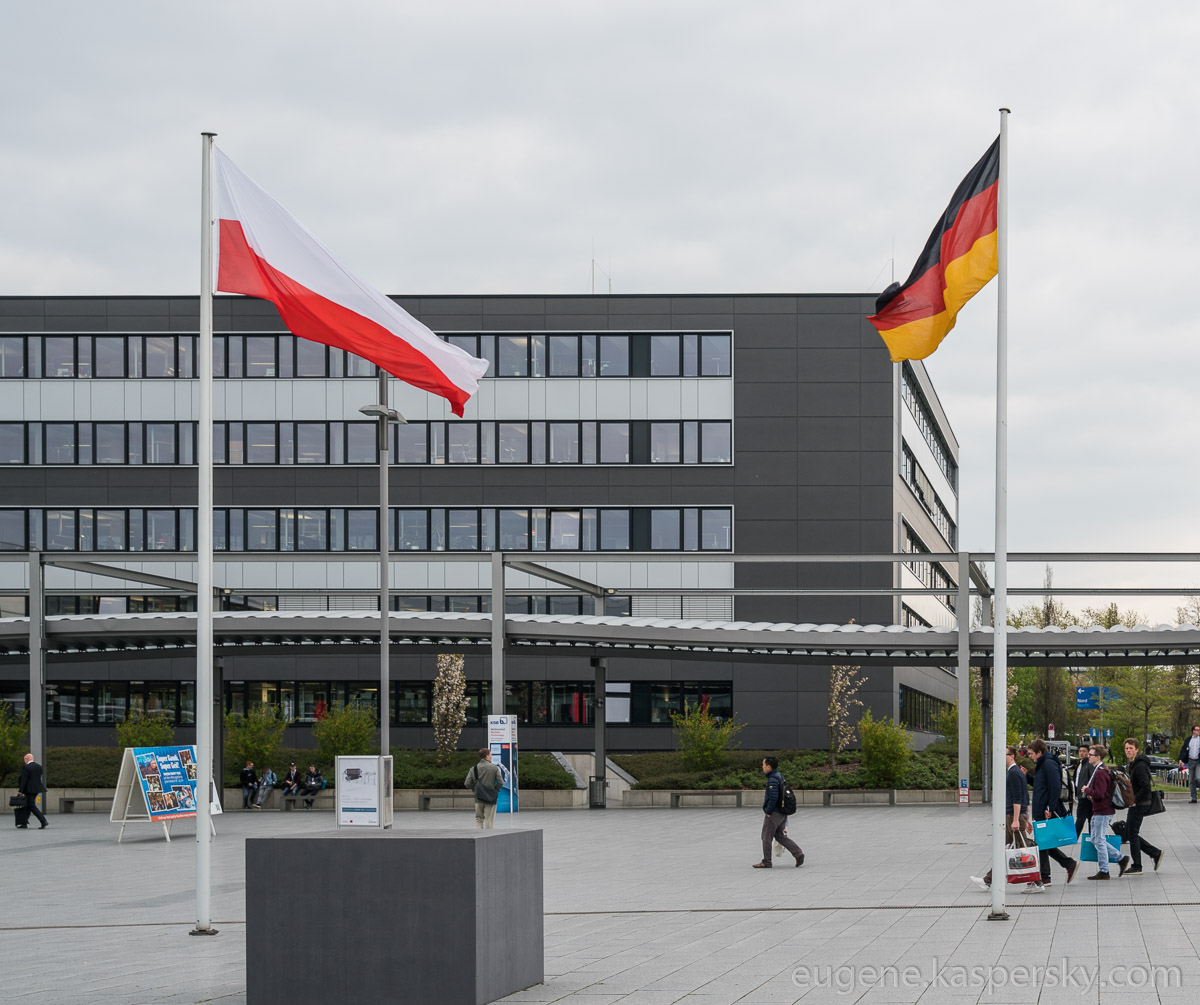 There were lots of other national exhibits, as well:

And here’s us – standing modestly by the wall.

This reminded me of our first steps on the global market in the late 1990s. Right here, in these same pavilions, but a month earlier, at the CeBIT IT forum.

Our first booth was the size of two desks and stood in a corner somewhere. It was there that we tried to lure our first partners, to persuade them we were the best, negotiating terms and conditions. Gradually, year after year, our exhibit grew, moved to the middle of the wall, and then after a few iterations, moved to the center of the pavilion and got a second level. Then there were the Russian Disco parties at our booth (which were recognized as the best parties of the forum by the local CeBIT press). So many things to remember! It was here, long ago, that the company’s international success was forged. It was hard work – the working day was exhausting, and then there were those parties at night – and it went on for a week. It was great too. It was fun – pure adrenalin. Nostalgia…

And so – long live the Hannover Messe! This industrial exhibition is turning more and more to the Internet-of-Things, cyber-robotics and full-scale industrial revolution 4.0. And we’ll be securing it, no doubt about that. 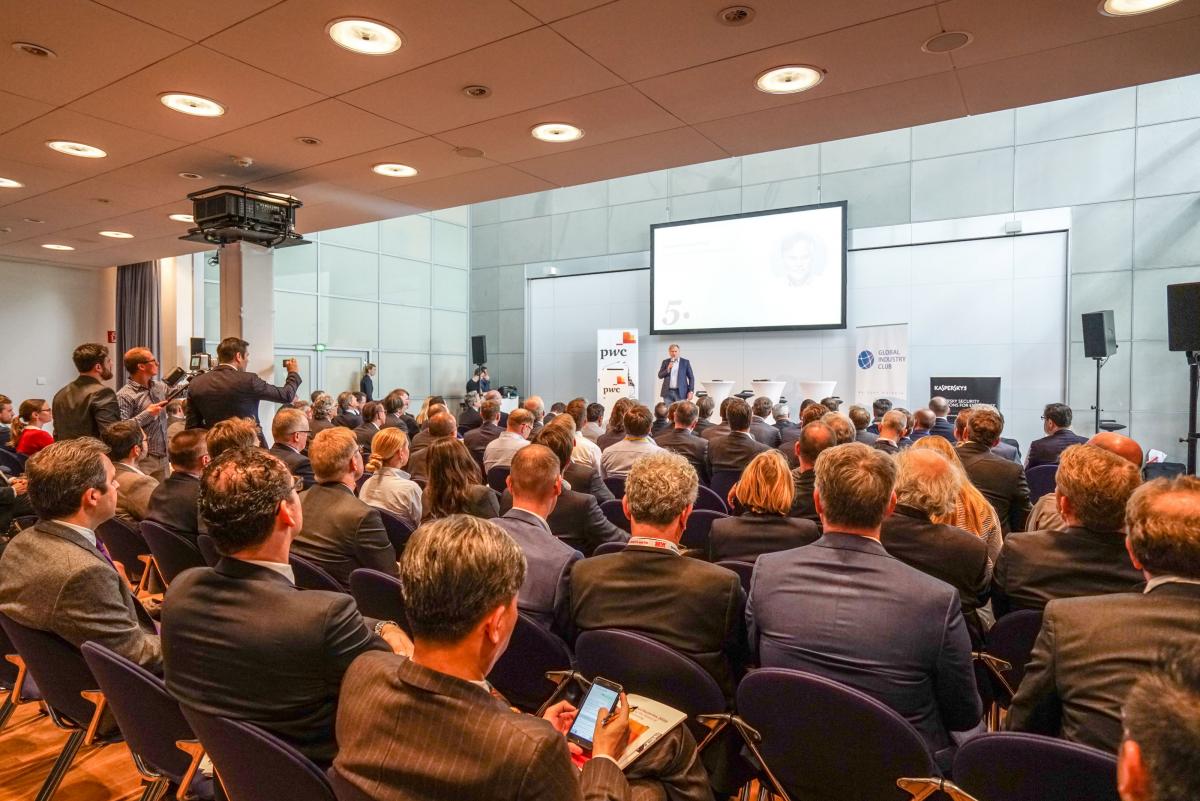 So that’s all for now. Bye-bye, Hannover! 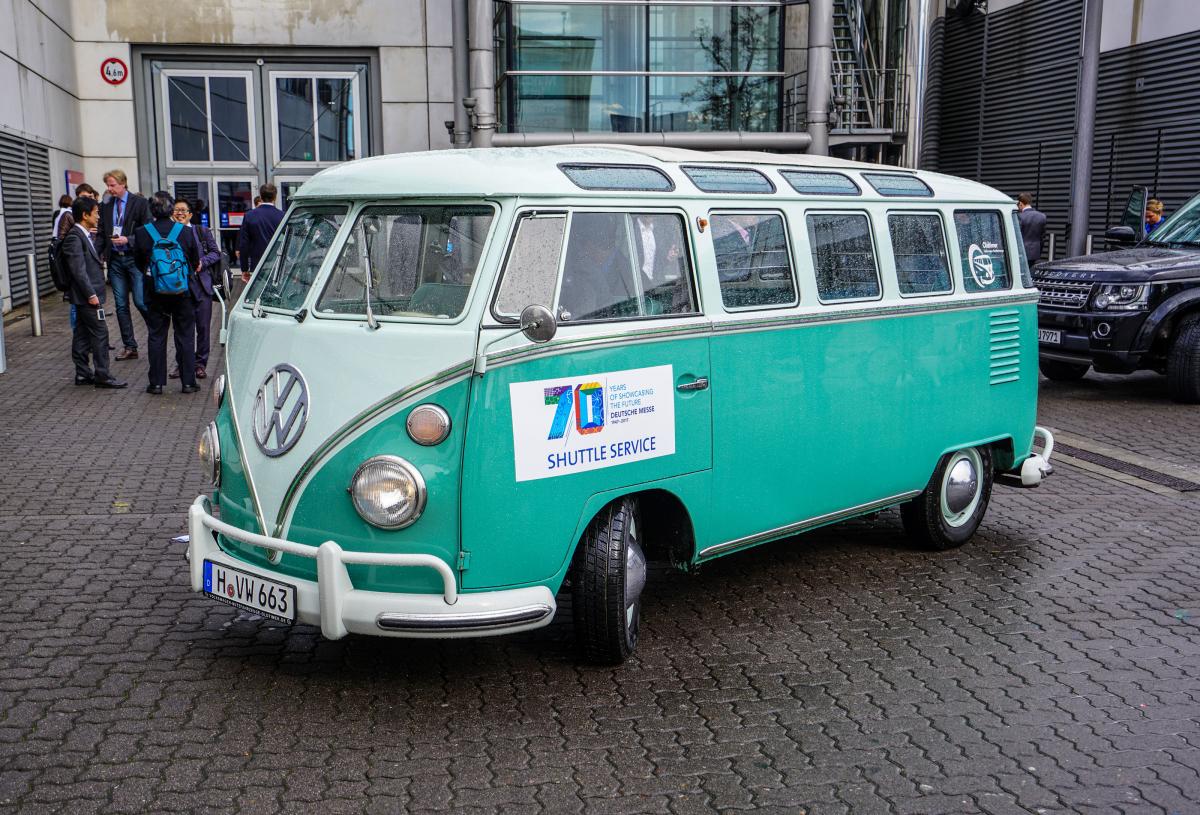