The second-largest famous thing of Seychelles is its giant tortoise. Specifically it’s from the Aldabra atoll, one of the Outer Islands of Seychelles, but it’s now featured on many of the other Seychelles islands too. Lovely creatures – and they don’t mind your taking their pics or even touching their shells :-):

The Internet – the one we all know and couldn’t do without for a second today – is still only a relatively new phenomenon. Just 20 years ago there was no Google, no Yahoo… Just 12 years ago you could only get yourself an account on Facebook if you were a student at an Ivy League university; the only tweets made back then were the original, analog versions; and iPhones were a mere figment of Steve Job’s imagination.

(The first iPhone appeared just 10 years ago; it had no front camera, no video, no GPS, no App Store! It’s like with many things today we take for granted – just a decade earlier they’d seem simply impossibly progressive and crazy!) 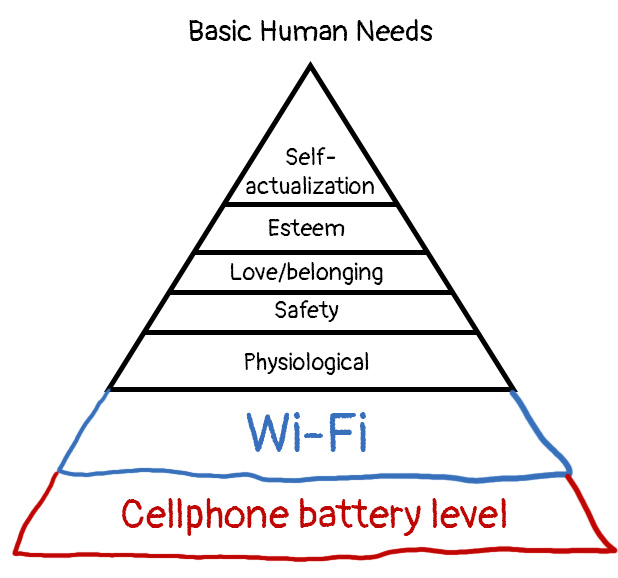 Then there’s the terminological confusion regarding the word ‘Internet’. The ‘Internet‘ is used to refer to all sorts of stuff while, strictly speaking, the Internet is a super-network joining up a huge quantity of local networks connected among themselves with TCP/IP protocols. This infrastructure uses the Worldwide Web, i.e., a network of millions of webservers all around the world, and this is where the likes of Google, Facebook and all the other zillion sites live. It’s namely this informational environment folks refer to when they tell you to find something on the Internet or ask if you’ve been banned from using the Internet at work. However, besides the web (www) infrastructure of the Internet, all sorts of other things are used, like various peer-to-peer networks, email, FTP servers, and other useful stuff like CCTV, televisions, ATMs, cars, and myriad other IoT devices.

But the theory and practice of modern computer networks aren’t what I want to talk about today. Instead, I’d like to talk about… archaeology! Sort of. I want to tell you about four proto-Internets of the past (in the widest meaning of the word ‘Internet’).

END_OF_DOCUMENT_TOKEN_TO_BE_REPLACED

Of course, I’m bound to get a lot of spam in my inbox – probably more than most. Decades of giving out my business card left, right and center; our domain included on presentation slides, in publications and catalogs and so on. Then there’s my email address’s simplicity. Sometimes employees’ blown email addresses we ‘leave out in the cold’ as spam honeypots while setting up new, slightly amended email addresses for the employee. But we can’t have that for me now can we? No. Because – first – I need to keep track of precisely who the enemy is, and – second – I want to personally be able to monitor the quality of our antispam protection. And I also don’t mind a few extra laughs now and again.

Much like entomologists with their butterflies, I file all incoming spam in a separate folder, check out the verdicts, and determine tendencies and false positives, while I forward missed samples to our antispam lab.

Curiously, since the beginning of the year the amount of spam has gone through the roof! And after studying its structure and style, it looks like most of it comes from one (1) source! Almost all the messages were in English (with just two in Japanese), and – main thing – 100% of this spam was detected by our products! I turned to our specialists… – and it was confirmed: it was a huge tsunami-like wave of a specific type of spam – snowshoe spam. This is unusual as normally around New Year spam activity falls in volume. 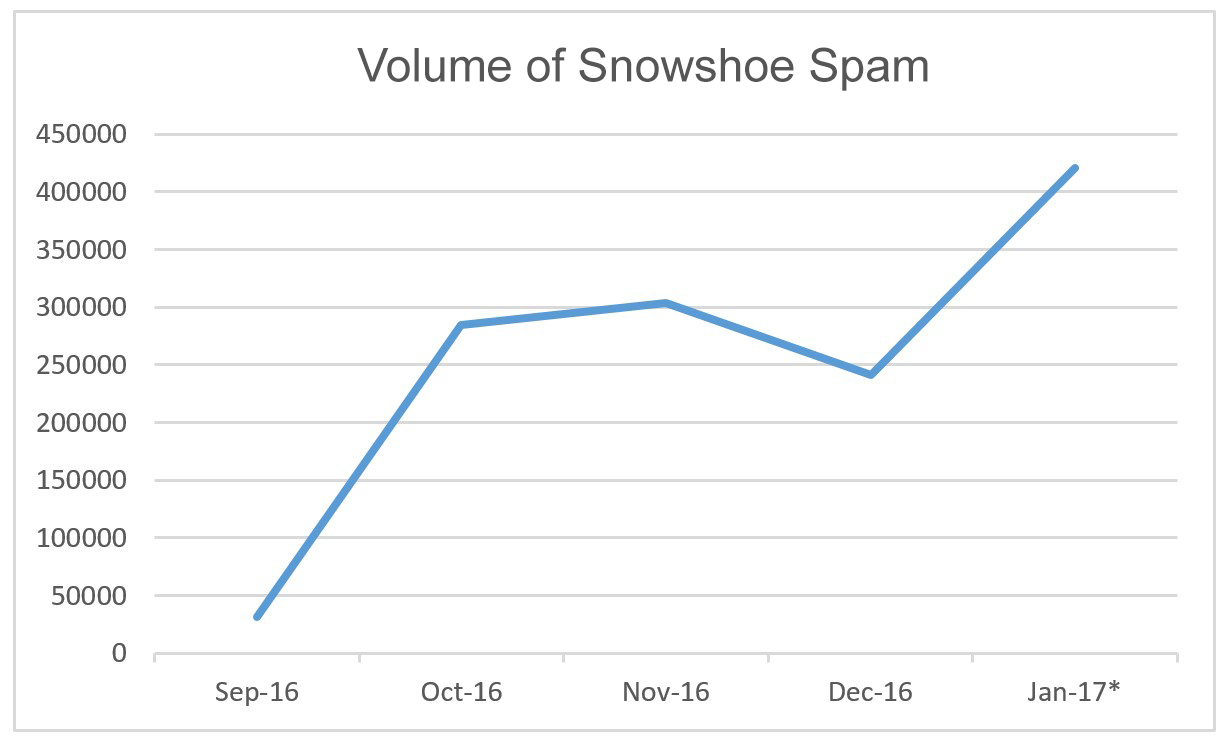 And here’s the data on how the share of snowshoe spam changed on the most active day – January 7 – in the inboxes of our corporate domain: 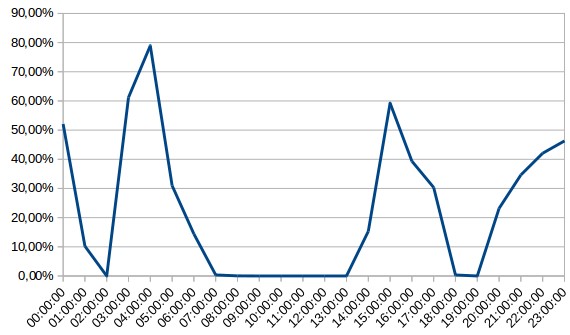 So just what is this snowshoe when it’s at home, and how can it be protected against?

END_OF_DOCUMENT_TOKEN_TO_BE_REPLACED

Our introduction into Viennese nightlife occurred most unexpectedly: we were invited to a ball! A real ball, which takes place in a large concert hall somewhere in downtown Vienna. Woah!

To the sound of chamber music, with the men in tailcoats (white tie) and the women in ball gowns, the guests gathered for the 10pm ceremonial kick-off to the ball. The ceremony was most official – formally opened by two government ministers (of internal affairs and foreign affairs). Here’s the latter making his speech. Yes – he is young for a minister :-): 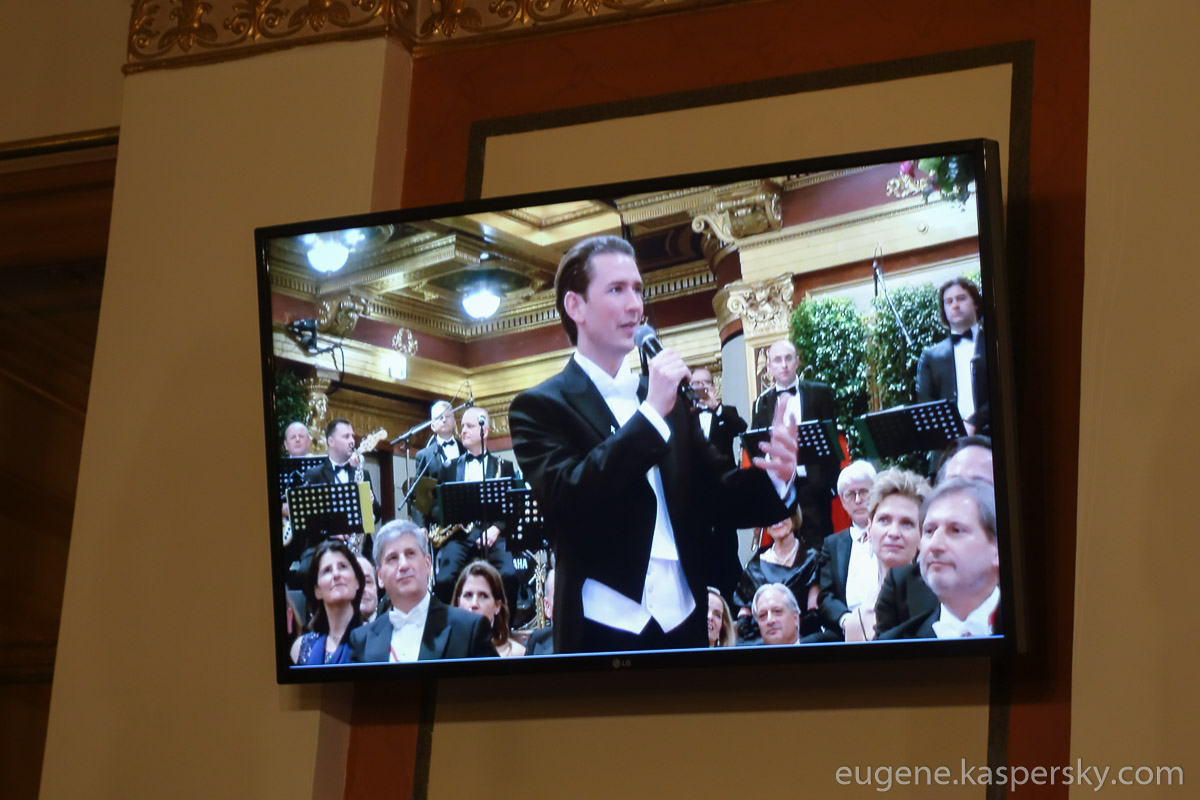 So, if I was there, why did I take a pic of a TV screen and not of the (young) man himself? Simply because there were that many folks in the hall – literally thousands! (Clearly evening-wear rental and/or sales must is a profitable business in the Austrian capital). So many ball-goers, in fact, that we couldn’t even get into the hall for the opening ceremony, which was just like you see in the old films: guests being paraded in front of the royal/ministerial hosts, with a few formal words exchanged with each: 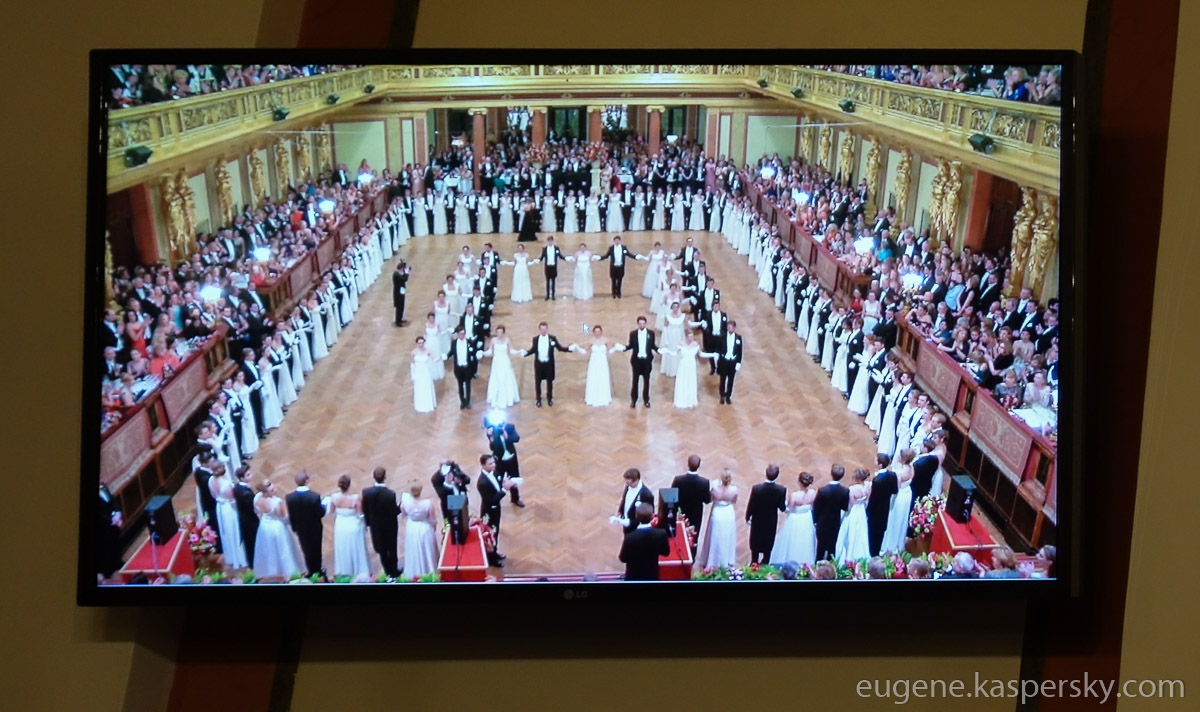 A little later things calmed down a bit and we managed to squeeze our way inside. And this is what I saw…

The debutantes’ dance, or whatever it is they call it: young couples new to such a ball. They take dozens of lessons on how to do ballroom dancing so they can dance as per requirements at the ball. The ball itself is something like an exam, or so it seemed to me. Or simply a demonstration of the newbies’ cavorting talent. The moms and dads in the audience must have been very proud: