Phew. After a few days’ rest and recuperation since last week’s merciless working schedule at the WEF, I do believe I’ve recharged my batteries sufficiently to be able to continue my notes on my four-day stay in Davos, where the WEF took place. 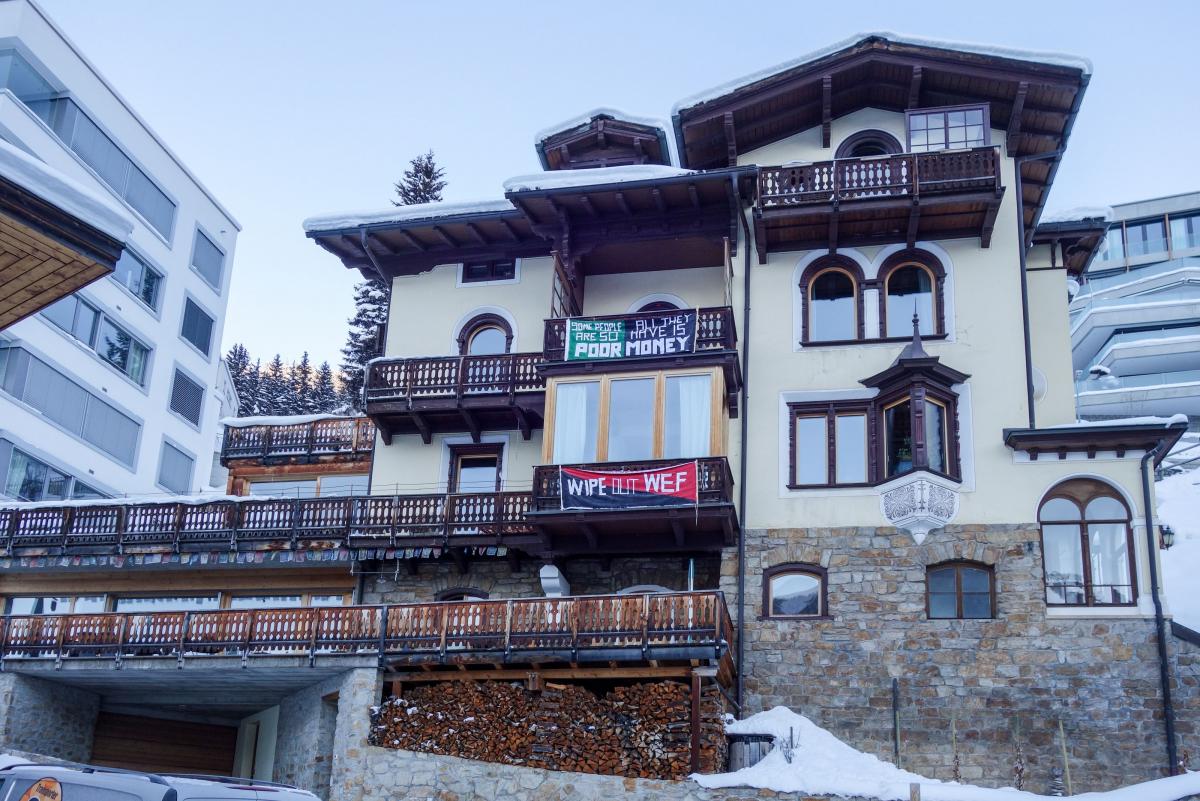 So, just why is it that this famous yearly forum – infamous to some, helpful to others – takes place in this particular tiny village in Switzerland?

The first version comes from my memory, after having been put there by someone I recall being knowledgeable about such things but whose name I’ve long forgotten. It goes like this:

Shortly after the Second World War (somewhere around the end of the 1940s or the beginning of the 1950s), European leaders (presidents and prime ministers) decided to meet up to discuss the best and quickest way to build up a badly war-damaged Europe. They decided that such a meeting needed to be in a place like Davos so that they’d not be disturbed for sure. That is, somewhere remote, high up in the mountains in Switzerland – a neutral country – which hadn’t been bombed and where, at the time, was rather living life to the full, unlike its neighbors like Germany and Austria, which were still getting up off their knees after so much fighting and destruction.

So they chose one of the most remote and quiet places of all – Davos village, which, incidentally is ‘the highest town in Europe’. It was probably hard to get to back then too. And without cell phones, the Internet or even widely accessible satellite comms – yep, you can see the appeal.

So anyway. The presidents and premiers met up, talked and discussed, and liked it! So they decided to meet at the same place next year, then the year after that, and so on, until it became a regular fixture on the calendar for every January. Down the years, ministers and other top officials were added to the list of invitees, as were bosses of large corporations from all around the world (so as to be able to discuss economic cooperation straight away on the spot).

Later, more and more folks from the world of business were added to the guest list, seeing the Davos yearly meet become less and less political and more and more economic-practical. Traders, industrialists, entrepreneurs – even rock stars and film stars – started attending more and more to become the majority participant-and-audience contingent. Meanwhile, the ‘squeezed out’ top political leaders headed for different get-togethers where they felt more at home: G7, G8, G20, and so on, making Davos predominantly a business bash. A successful-business bash.

So, like I say, that’s the story as far as it was told me years ago. I wouldn’t mind having it fact-checked; what if I was the target – and victim – in a political misinformation sting? Or a fake media campaign to distort the Davos story and influence conference participants’ attitudes so as to please certain entities or forces or powers-that-be?!

So, if any of you, dear readers, might be able to confirm the story (or parts of it) – please do so in the comments!

The second version about the history of the Davos Forum is a little more official, and so a little more dull. It basically goes like this: business leaders wanted to meet up, so met up – year after year – and it was a good idea, and everyone was happy and finally started to look (positively) toward the future and not just dwell on the past.

Hmmm. Those two versions are very different. I wonder what the truth really is. I mean, it is a rather unusual spectacle. Very important VIPs all crammed together in the middle of nowhere; a nowhere where the lodgings are very modest, yet some of the world’s richest individuals turn up year in, year out?

I first landed at Davos in 2012. I’ve been every year since, making this year’s WEF my sixth. Oh my gabfest. Six? And 2012 feels just like last month! So how come I started yearly pilgrimages to the Alps?

Well, the powerful folks that turn up at WEF eventually realized that they were living in a digital world, as if suddenly understanding that we’re living in a cyber-revolutionary domain. So the WEF started to attract IT bosses. Then they understood that they really need to attract folks from cybersecurity too. So they looked around… and found us. And we didn’t turn them down, so went there first in 2012. And ever since there’s no way we ain’t going back – every year.

With every new year, Davos is less of simply a politico-economic pow-wow. IT is becoming more and more central to its themes and discussions, and that of course means IT security too. Today, along the ‘promenade’ (the main road that runs through the village) you see nothing but the names of the most active computer companies of the world (where they convert cafes into temporary offices).

The Industry 4.0 theme (robots, 3D printers, smart sensors, flexible manufacturing, automation, machine learning) continues to attract much attention and interest in Davos. And there’s a feeling that all large companies, in all fields – from banks to high street stores – have already become to a large extent IT companies; and those companies that haven’t are feverishly trying to make up for lost time. And everyone now well knows just how much of a threat cyberattacks are – which wasn’t always the case. Accordingly, my business schedule for most of a week every January is becoming more and more hectically intense.

Indeed, this year there was unprecedented interest in cybersecurity, including protection of critical infrastructure and industry. I had more meetings about these topics than one could shake a stick at. Not that I’m complaining. I prefer this to how it was in the past, when the conversation would get a bit fancifully cosmic, like: ‘so, how does cybersecurity affect the future of mankind?’! This year the talk was a lot more down to earth and practical.

What needs doing? How? When should we start? Which approaches in particular should we use? I kept getting grilled with such questions – from leaders of corporations and even countries – from  dawn till midnight for days (with hardly a break in-between)! Yes, there was a lot of duplication, but what can you do? Can’t complain, that’s for sure ). Must say, this year it felt like there were more business-folks than politics-folks; but maybe that was just because I was talking about the business side most of all, and less of the ‘political cyber-cooperation’ one.

In the past, some three or four years ago, I had three or four meetings a day, including one or two media interviews. This year it was more like 10 to 12 meets or panel discussions or interviews a day from as early as 7am! And I’m no morning person, so the mornings were doubly hard. The one good thing about getting up so early though was Davos-at-dawn pic-potential! 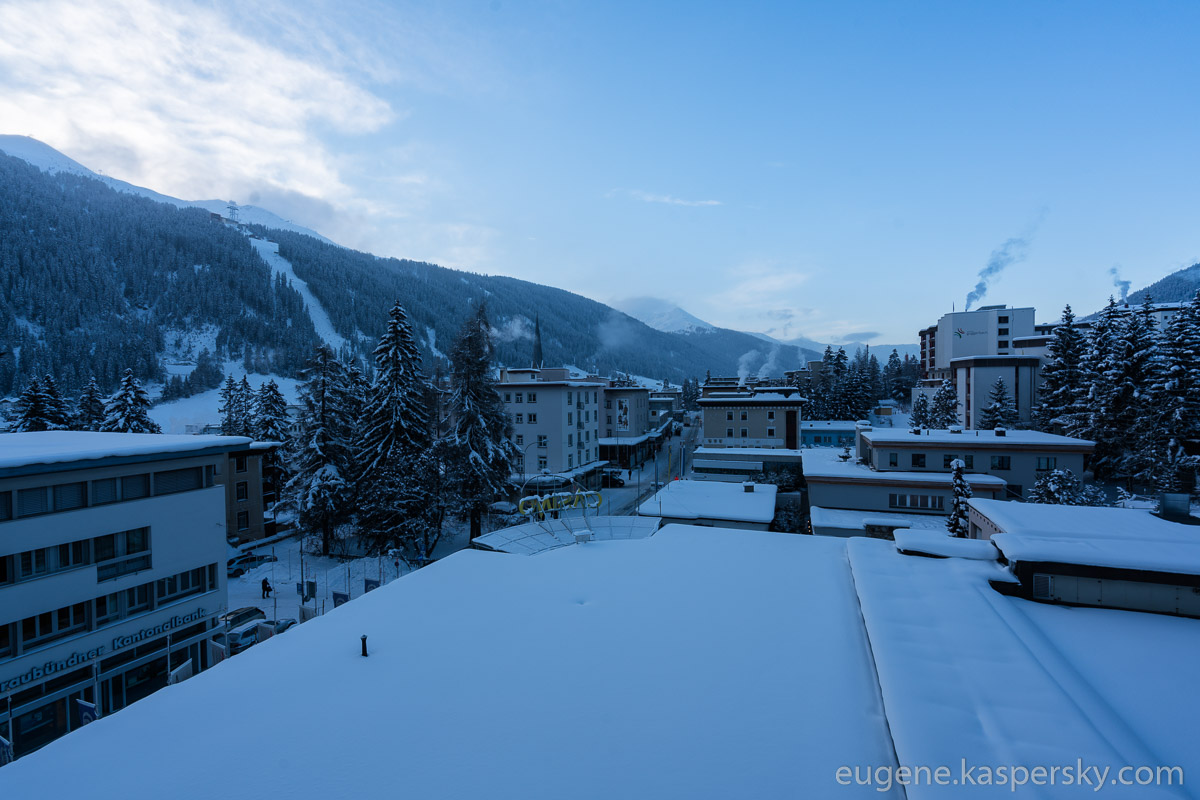 And it looked like I wasn’t the only one with such a packed schedule. Before sunrise there were crowds of suited business types trekking through the fresh snow (which isn’t removed as regularly as in Moscow) hither and thither between hotels and to the congress center.

I don’t know the figures, but this year I’m pretty certain there were more participants at the forum than in the past. The above-mentioned hotels and congress center have always been pretty busy, but this year… it was like Red Square on New Year’s Eve!

Naturally, all these crowds affected the pricing of lodgings. It’s always expensive here during WEF week, but this year it was extortionate! And the prices are all the more bizarre as Davos… well, isn’t all that great a resort on the whole. The ski-lift is so-so, the hotels and restaurants are too; in fact, everything is just so-so. I give it three stars out of five as a ski resort. But the prices for a tiny box of a basic room (see pic below) are higher than a presidential suite in a cool capital somewhere! 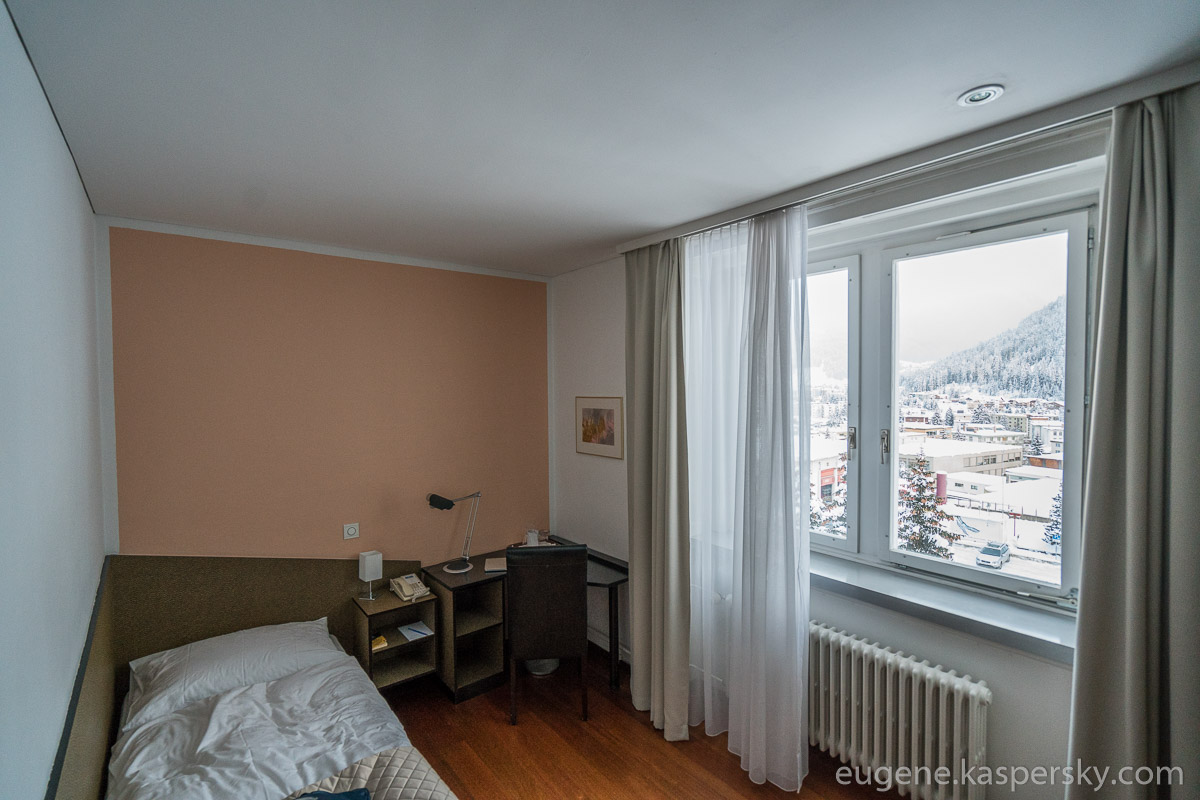