After the Shyoki rapids, the Katun turns into a relatively calm river and stays that way for a full 200 kilometers, where the river’s smooth (though fast) current is only rarely interrupted by short stretches of riffles. All around there are mountains, lush forests and fields, and not a single person in sight for kilometers – except for us . We didn’t even see any wild animals except ducks, and some local type of nettas or cormorants occasionally flew back and fore along the river.

Our raft with the tourists on board splashed down the river, the captain was silent – there were no orders to paddle – so we enjoyed the sights and landscapes as we floated along. The sun came out, warmed us and looked down on us from above. So we fell into meditation and nirvana…

Only rarely did we have to rouse ourselves, to execute commands like “paddle left, back water right”, enter yet another rippled stretch of riffles properly, and get a chilly shower of river water. The waves are quite big and the front of the raft caught quite a bit of water, so the passengers tourists sitting behind had to brave chilly showers every now and then. The captain-helmsman typically remained dry – well, he’s a pro, no question about it.

And then we returned to nirvana, meditation and prana mode.

The raft splashes, the landscapes drift slowly by, the river meanders left and right, and time also flows in its own way. It’s all a bit imperceptible but you get carried away. I mean it – it really carries you away. The scenery slowly changes, the water current is smooth and unhurried (about 7-10 km/h), and time passes imperceptibly. The tourists managed to cover every possible topic of discussion, so they lapsed into silence every now and then; even when they did talk, it wasn’t difficult to zone out and ignore their conversations, which were usually along the lines of “Well, here’s another story…”. The captain also kept silent more often than not. Possibly he too was looking around and meditating together with us.

Then we were treated with honey and mead, and things got cheerier in an instant. I would have gone on and on splashing along the Katun and meditating, but then, out of thin air…

Wow, the river became well populated. The motorboat traffic was actually pretty modest and didn’t interfere with my meditation. However, hunters’ lodges, houses and apiaries gradually appeared on the banks. Some houses looked to be of quite good quality. Then the first village came into view – with the romantic name of Maralovodka, or ‘Red Deer Waters’. That was the first populated locality we’d seen in 10 days of semi-autonomous travel.

So what did the tourists do? And what would you, dear reader, have done?

Of course, we went to the village store! There it is, the green building on the right. We bought all kinds of stuff, a bit of this and a bit of that. I’ll take two of those, no, four. 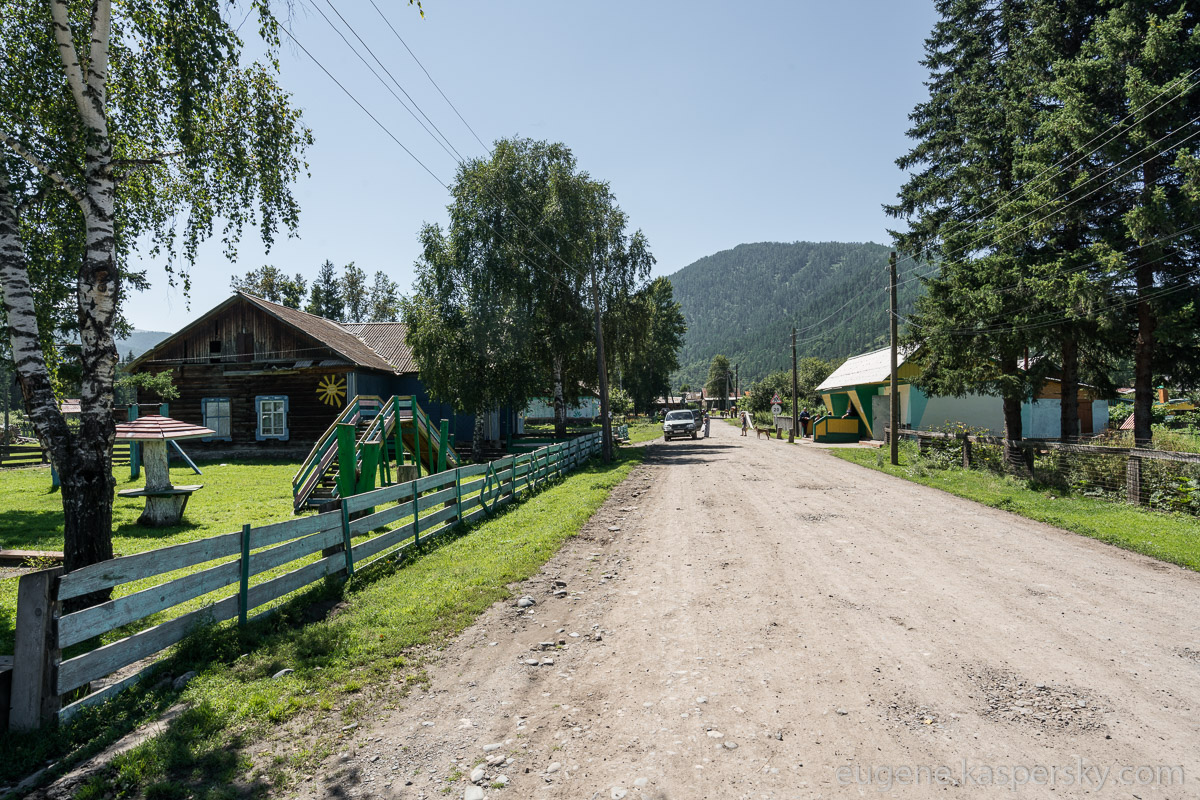 We also bought ice cream. Just try spending a week or two hiking, riding and rafting, and a plain old vanilla ice cream will seem like a truly delicious treat! :) 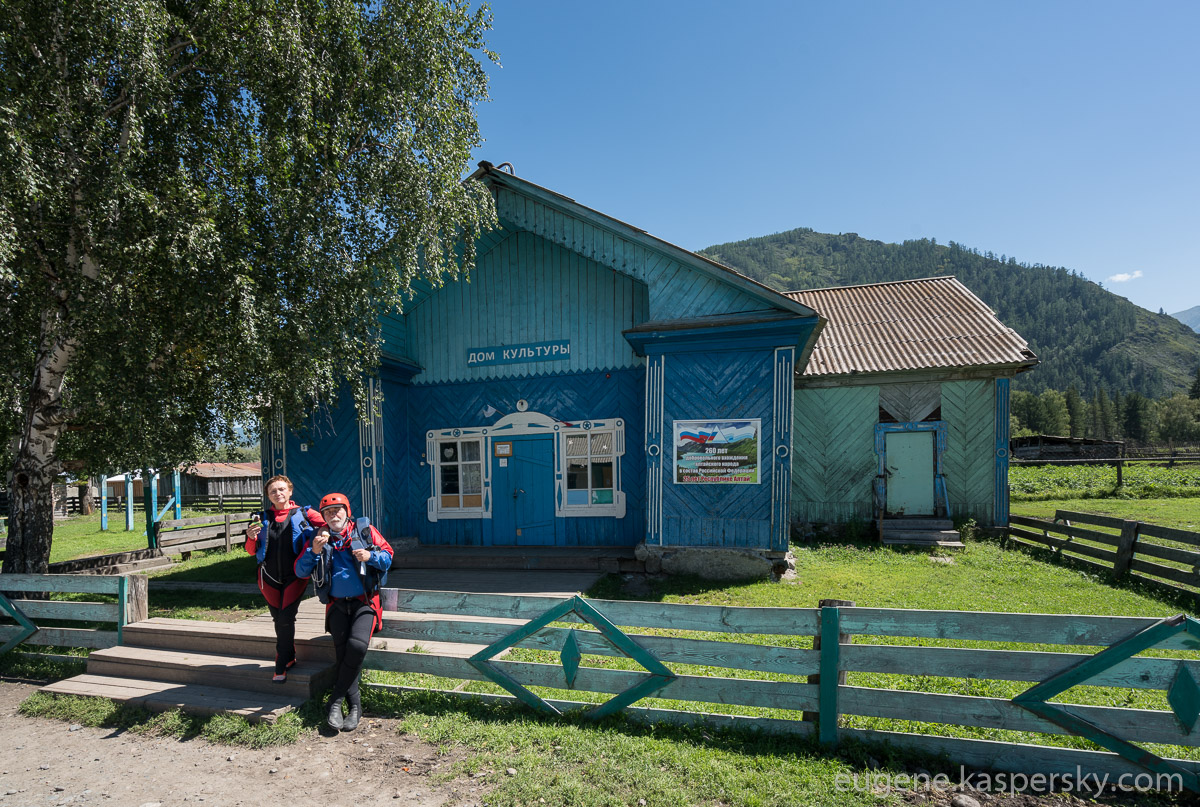 Then we had another 20 kilometers of relaxation and meditation till we arrived at the relatively large village of Ust-Koksa. 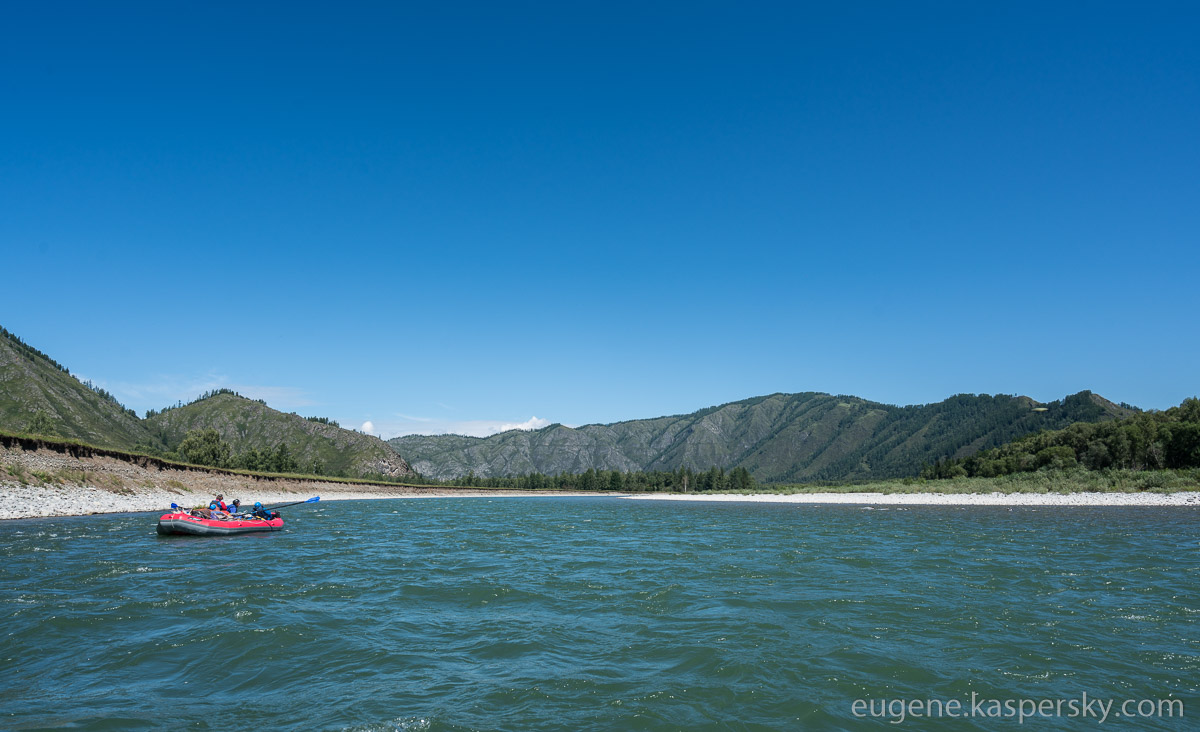 At Ust-Koksa I forewent the ice cream run to the store (but did order a delivery:), and continued to meditate at the scenery, and entertained the local kids who came running out to see the ‘tourist guys’. 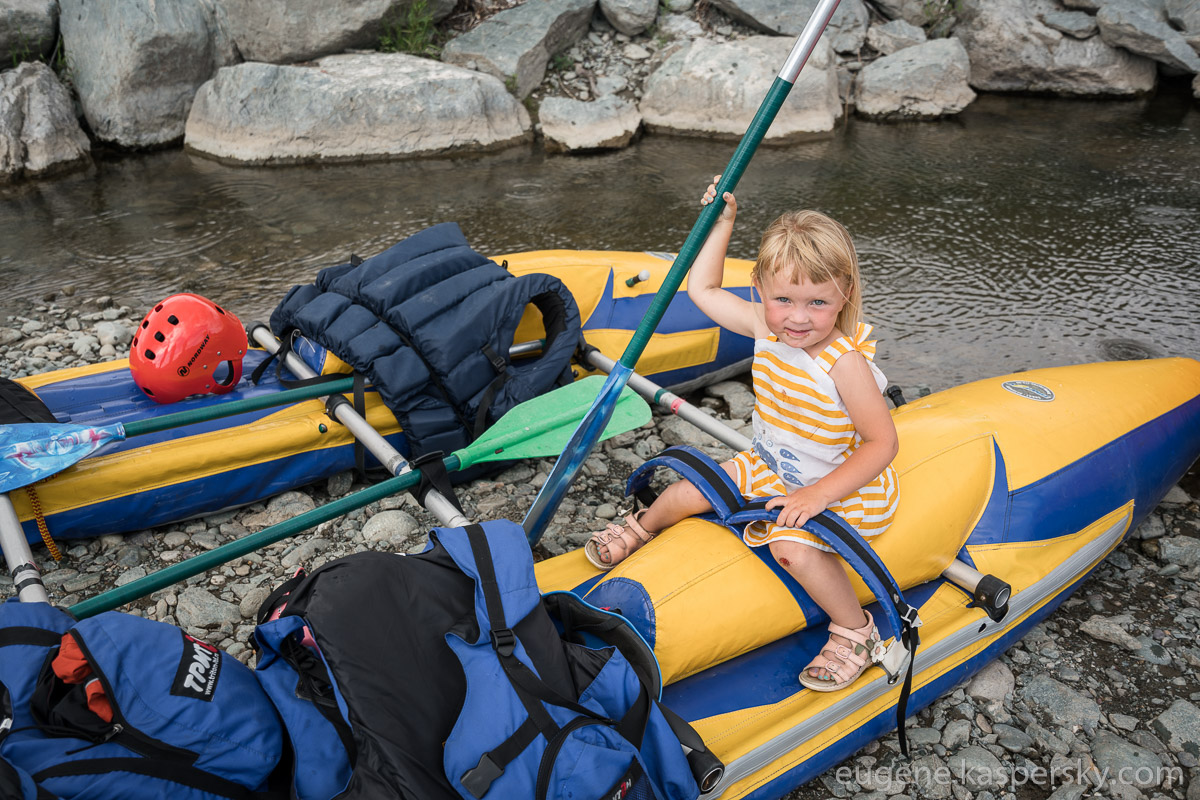 By the way, we were told that we were the first crew this season to raft this route. Nobody before us had rafted the uppermost stretch of the Katun this year. One word: pioneering!

Another by-the-way – in the photo below, you can see a horizontal line on the side of the mountain… 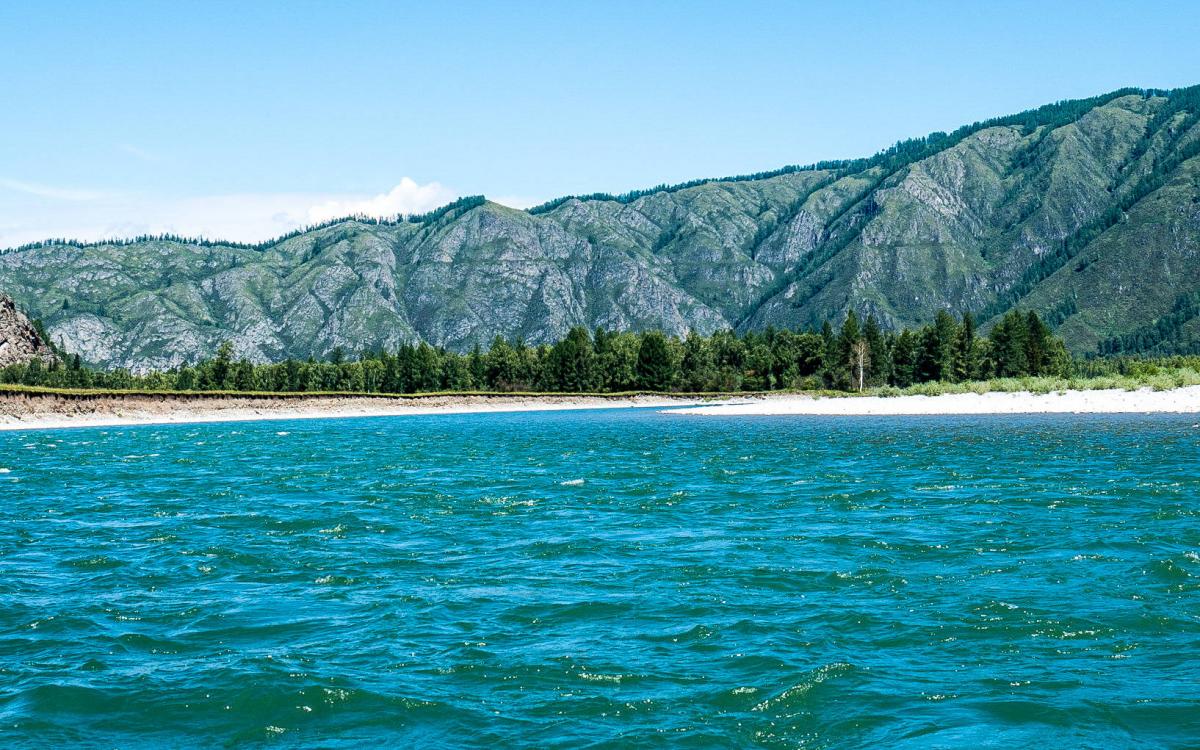 That’s the water level of an ancient lake that existed back in the cold geological epochs when the water of the Katun River was locked in by the glaciers that crept down from Belukha‘s slopes. This means that some of the mountains here were islands in a huge lake.

The real wonders began later: when we passed Ust-Koksa, the Katun turned into a perfectly calm river. The team went into total relaxation mode, self-indulgence, and complete and utter moral decay in every possible way.

Everything would have been fine – we were meandering smoothly and merrily down the river to the sound of birdsongs, and prana and meditations in the upper layer, until… ta-dam! Surprise! A Nicolas Roerich Museum. A quite unexpected encounter. It’s a cultural center on the Upper Katun.

We had a guided tour of the museum. It was cooler than the rough waters of the Katun. Also, I must admit, it was the first time that I had visited a museum wearing shorts. These things happen.

This is the village of Upper Uymon. What’s so special about it? Well, it’s a long, long way from Brussels. But still, the main road in the village has an asphalt surface, and there’s chocolate ice cream in the stores! 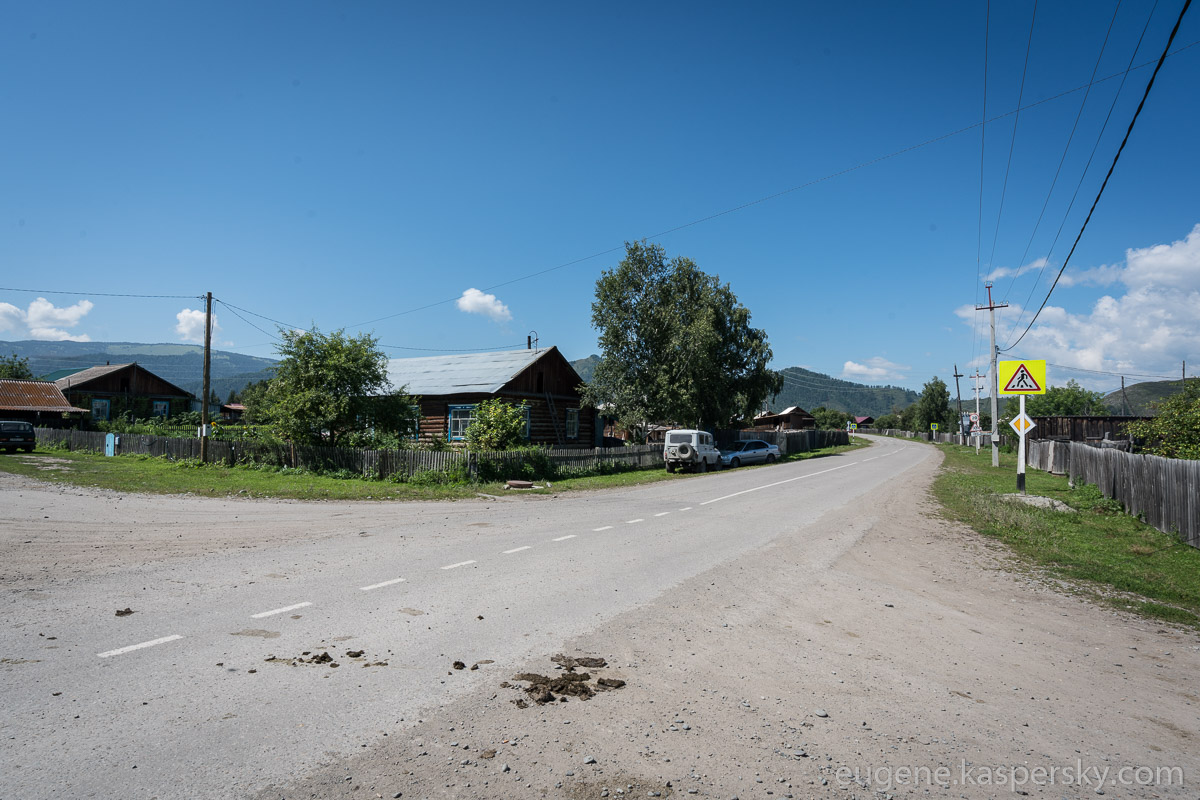 Midway into our Altai trip, we had a…’day-off’; no – actually, a ‘night off’: we stopped in the village of Tyungur (where our route started) and spent the night at the same tourist center where we spent our very first night in this land. Thus we completed a hiking, helicopter and rafting loop in the Altai mountains. By the end of the trip, we will make it into a skewed figure-of-eight, and so far we’ve completed the lower loop.

We spent the night in the tourist center (that is, in beds in its rooms), but nearly everybody, by force of habit, also pitched tents around the center. Immediately after that, we sat down to enjoy the sunset.

This is a lovely wild place; I recommend it. 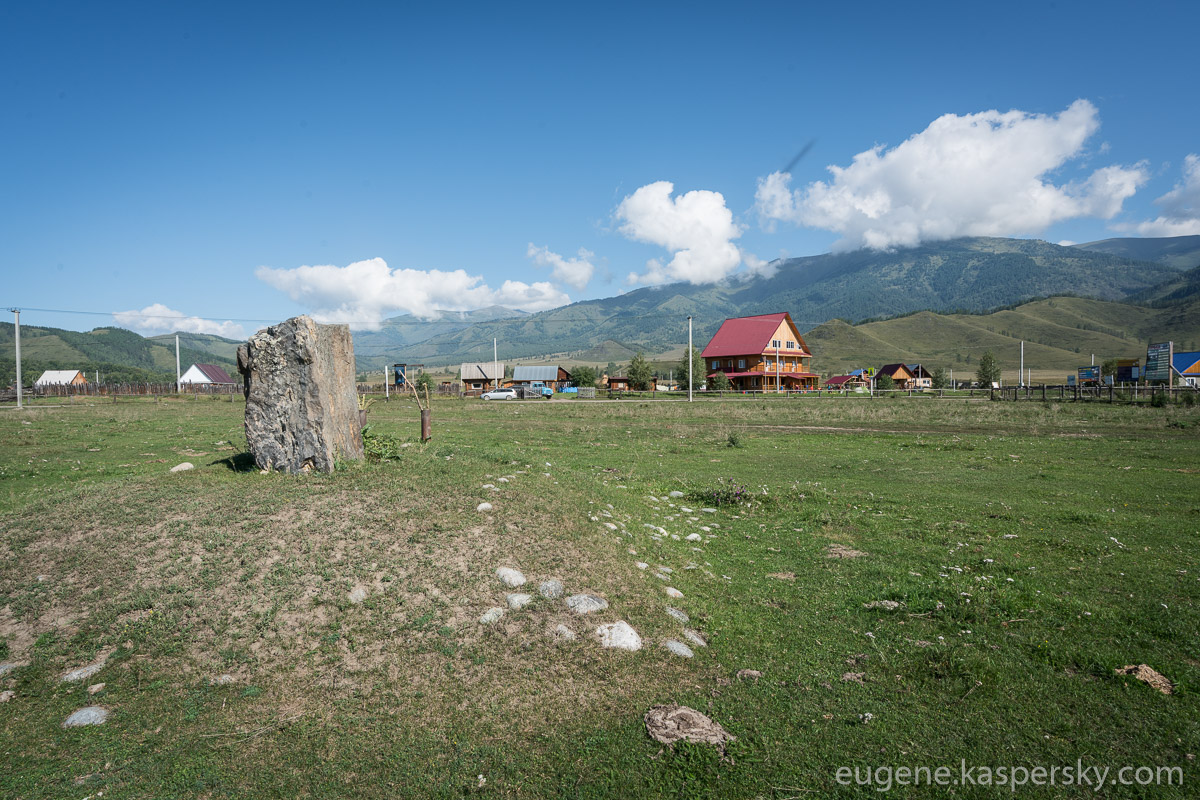 It had been my dream for some 20-odd years to take a rafting tour along the Katun, and especially to pass the Akkem rapid. Now I’ve done it! And that’s what my next tale is about… 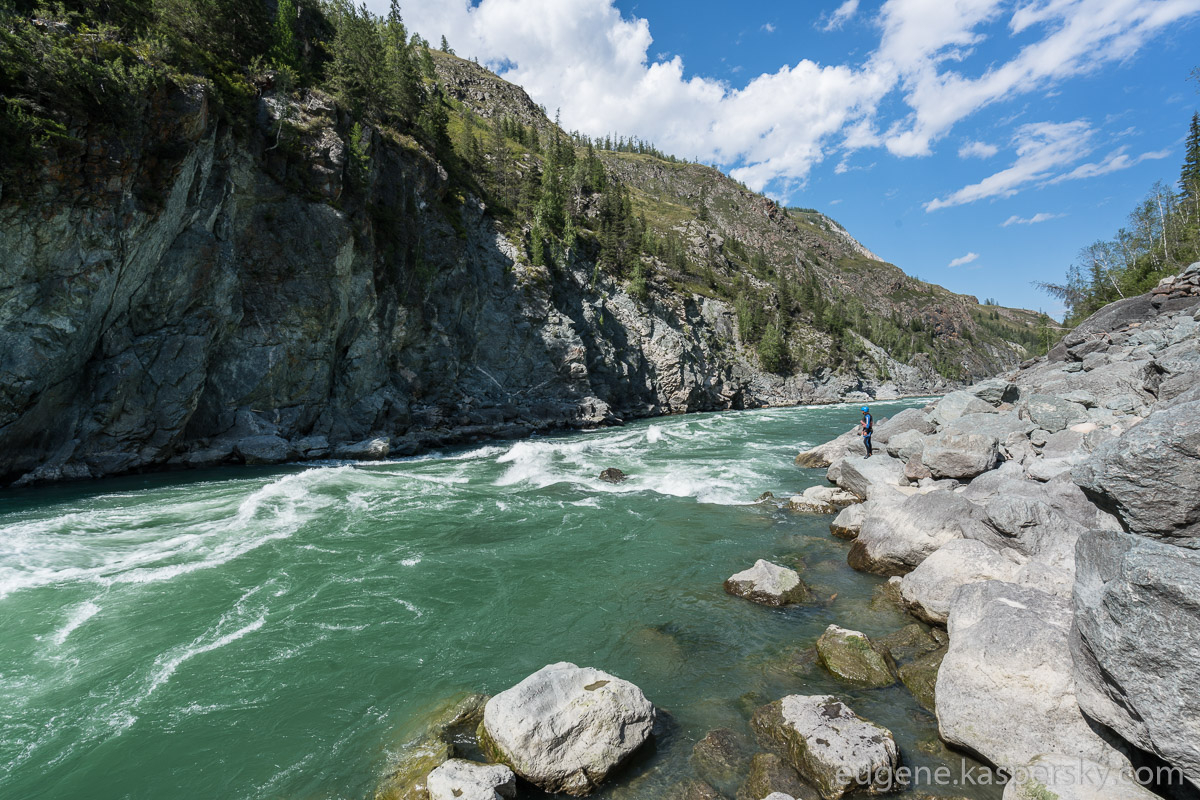 The Akkem rapid is a roughly 10km stretch of the river within a canyon that’s quite difficult to escape. It’s practically impossible to walk along the banks – there are either huge rocks and boulders of varying sizes, or precipitous cliffs. You could try climbing up to one of the tracks located higher up the hillside: there’s definitely one along the left bank; supposedly, there’s another along the right bank as well.

However, climbing 200 or 300 meters up some rather daunting slopes (see the photos) is only for extreme climbing enthusiasts. Therefore, once you’re in the Akkem canyon, even at its starting point, there’s only one way to get out: to take the water route down to the bitter end, no matter what.

It starts with a gentle river and picturesque tributaries. Nothing foreboding about that…

The milky white glacier-sourced water of the Akkem River flows into the powder-blue Katun; stunning!

Next to this mountain, the river turns left, and there is the entry riffle to the Akkem rapid. 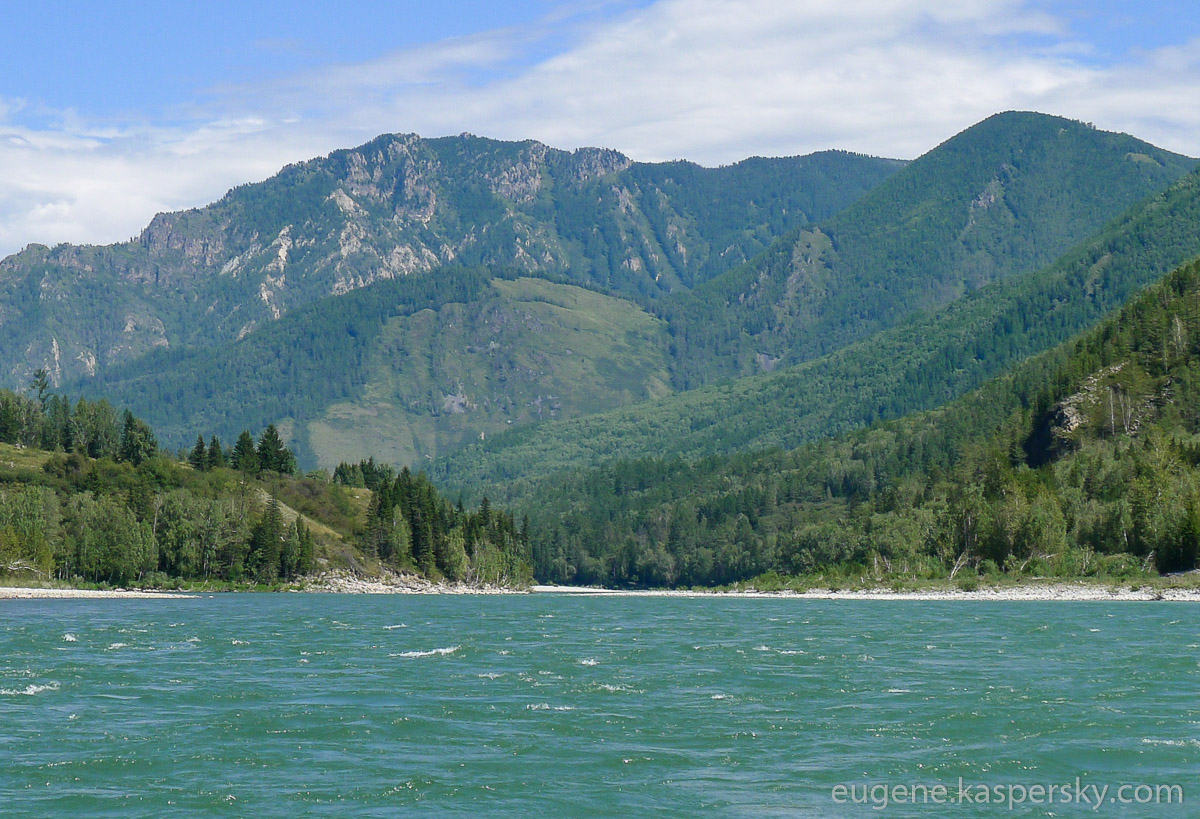 Technically, the Akkem rapid is not that difficult in terms of the skills required to pass it, for most of its length. It’s basically a strong river current in a constricted riverbed, with occasional mild riffles and underwater currents rising to the surface. However, there is one tricky place with multiple holes where one can potentially capsize. There, you have to stop and spend some time on the bank looking at the whitewater. Apart from ‘inspecting the obstacle and listening to instructions’, it’s also worth taking in the beauty of the whitewater and the foamy waves.

Our stern captain is about to give the order to start. 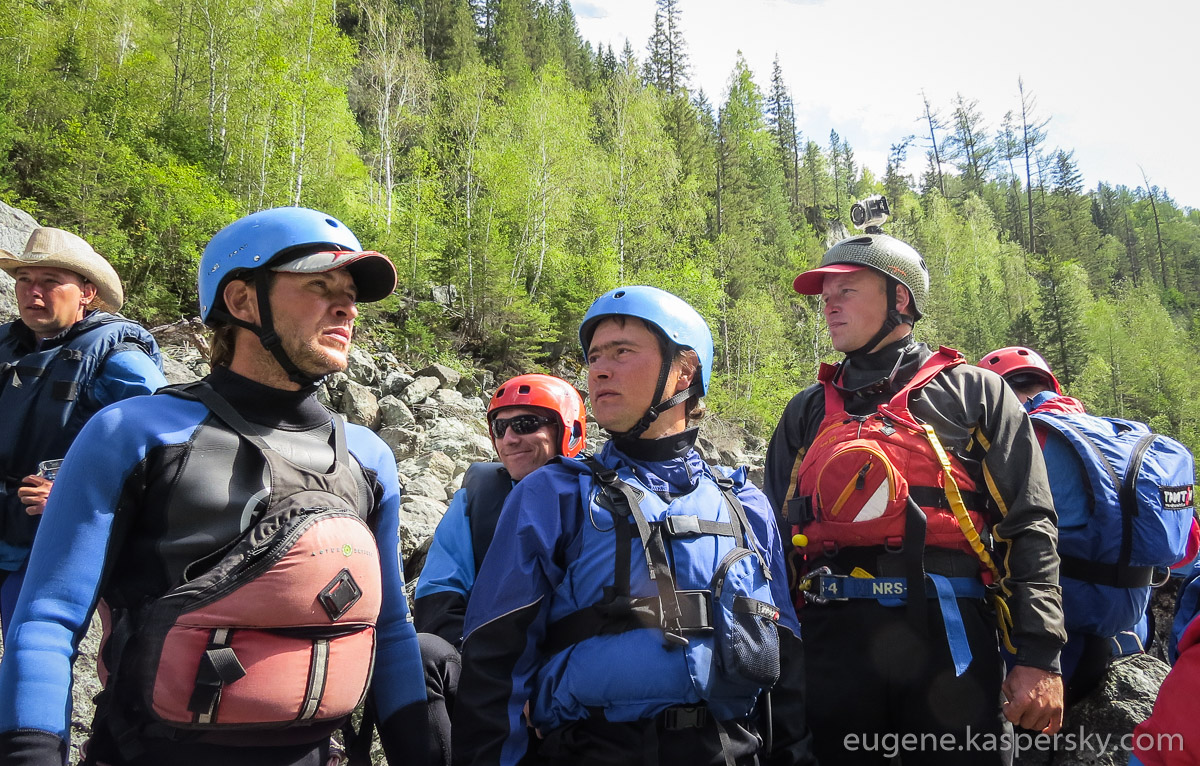 So, had a good look at it? Taken some photos? Right then, we’ll get going. And it all went by in a flash. Splash-splash, bang-bang, some water poured onto my face, and then I was thrown to the other side of the raft (I thought: we’ve capsized), then again and again and again, and then the captain turned the raft broadside and shouts “well done, we did it!”

That was cool! I want to do it again!

Later when we were done setting up camp for the night, a thought struck me: water parks will never be the same again after the Akkem rapid. It’s been really cool. I really must do it again some time!

Now the evening is approaching, and it’s time to go to a makeshift camp set aside for those who’ve passed through the Akkem rapid, or taken the whitewaters in the Argut River, the right-bank tributary of the Katun River. 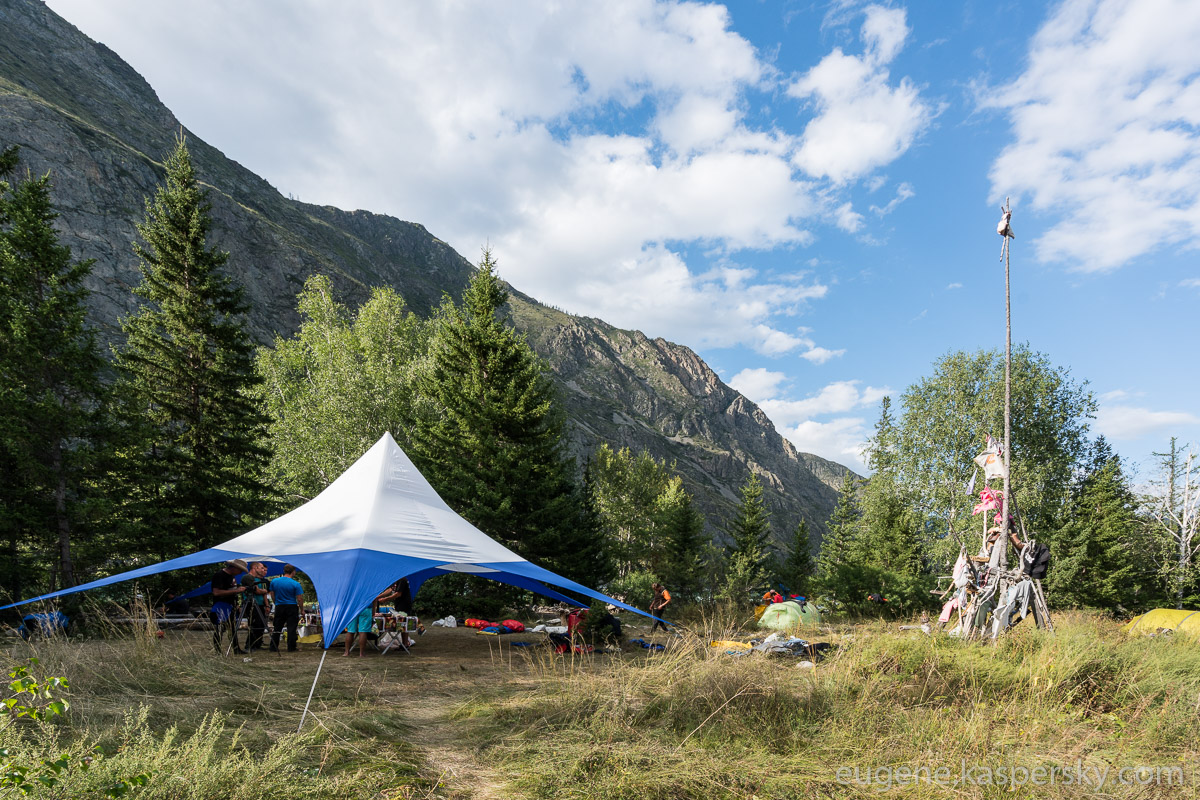 This camp is notable for its ‘Tourist installation’, also dubbed the ‘Museum of Water Tourism’. We also left a message. If you happen to be there one day, the black T-shirt is the one we left, but I think you’ll guess that judging by what’s printed on it…

And ahead we still had the most powerful rapids on the Katun River. I’ll tell you all about them in my next installment…