Altai ranks up there as one of the most fascinating and magical places on earth.

It’s not only beautiful – there’s something about the place. It might be some sort of special energy in the rocks there or something else unbeknown to us. Here the colors are brighter, the water tastes better, the grass is greener, and the mountains contrast more with their surroundings. This year I was lucky enough to spend three weeks in Altai with a group of like-minded adventurers. We hiked, choppered, and rafted (down the Katun River).

In all we walked about 70 kilometers to Lake Akkem and then around it, flew around mount Belukha in a helicopter, flew up to the headwaters of the Katun and rafted down to the lower reaches of the river – almost 400km (four HUNDRED kilometers!!) in all, and descending over a kilometer along the vertical axis. This was my ‘summer holiday’.

Time for a well-earned rest after reaching the water. A beautiful sight…

The color of the water in the main section of the Katun is many shades of green – light green, turquoise, sometimes emerald – when mixed with the clear waters of adjoining streams. The reason for this is the ‘glacial milk’ – very fine rock flour formed during glacial migration, where the glacier grinds against the top of the rock beneath it.

A helicopter flight and a bird’s-eye view.

The source of the Katun.

A mixture of the multicolored waters of the river and its tributaries – fascinating!

A trip down the river.

Things then got a bit more serious…

There were other things too… but more on those later…

If you’re wondering how we managed to do all this in just three weeks, it was down to the expert help and support of local guides. 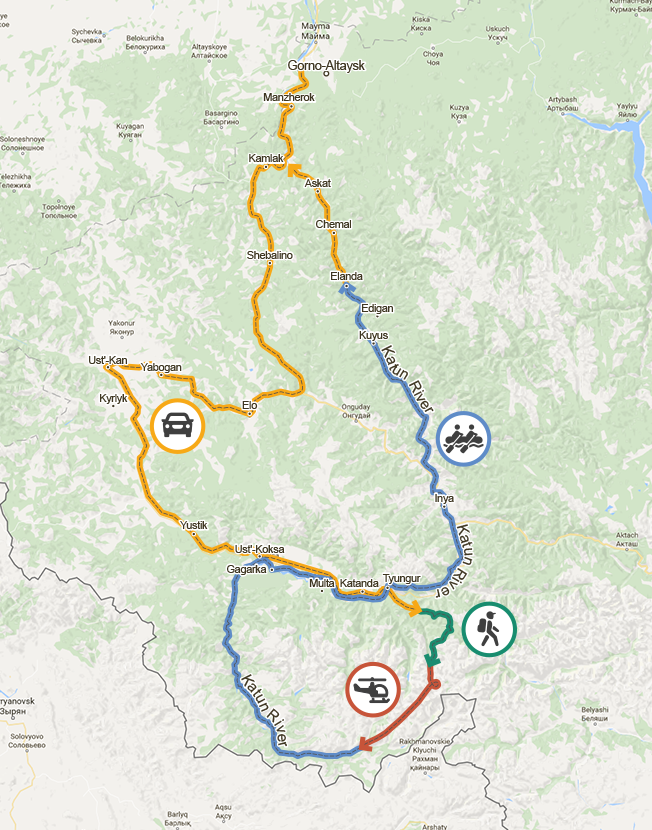