Iceland‘s a very wet country in the cool time of year, and very snowy in winter. (There isn’t a warm season here to speak of – unless you submerge yourself in hot springs for three months.) So, in terms of H2O here – there’s plenty. And since there are a great many volcanoes in the country too, the conditions are perfect for a blossoming of the population of Iceland’s waterfalls – of which there are also plenty. Here’s a list of the five main ones we visited in the south and southwest parts of the country, all of which are wholly worthy of checking out in person.

Waterfall No. 1: Gullfoss. Here. And here:

Gullfoss – one of the most popular waterfall attractions in Iceland

Waterfalls Nos. 2 & 3: Seljalandsfoss and Gljufrafoss (and a couple more small waterfalls nearby). These are a little further from Gullfoss along the southern coast (heading west). What’s cool about waterfall No. 2 is that you can go behind the stream of water via a cavern behind it, which, incidentally, was clearly dug out by the local elves eons ago :). Waterfall No. 3 descends into a deep crevice. Not seen that before. Both waterfalls need to be viewed from down below as well as up on top. The (ultra neat and tidy) path up is a real steep climb, and along the way you need to navigate yourself across a stream. No matter – it’s worth it. 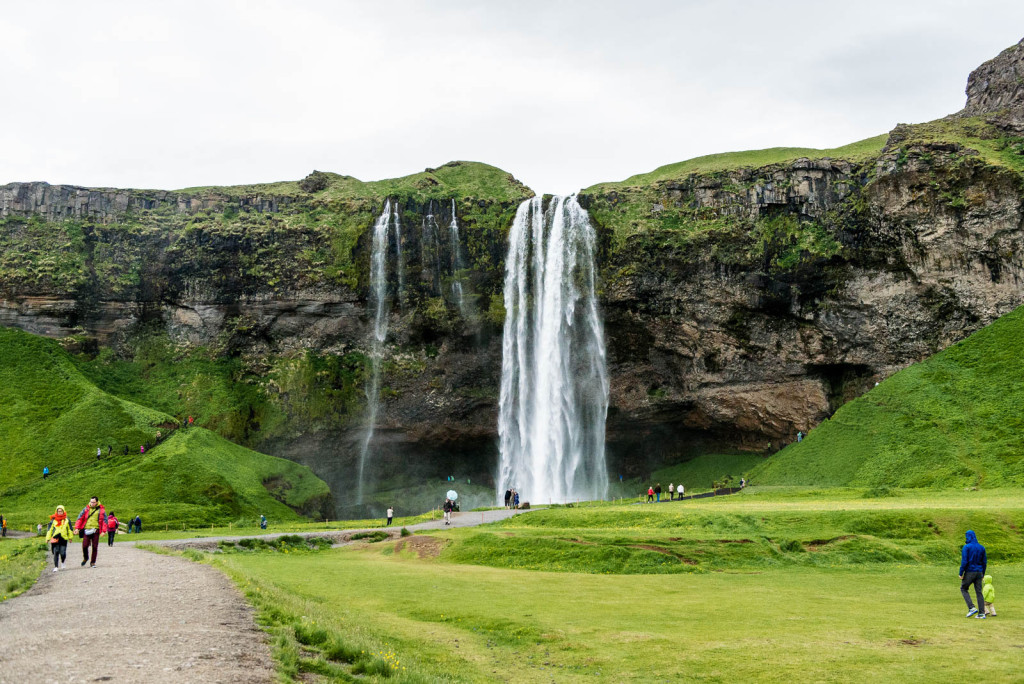 Seljalandsfoss comes off the river Seljalandsá; it drops 60 meters (200ft) over the cliffs of the former coastline

Waterfall No. 4: Skógafoss. Still a little further along the Ring Road, 8km after the Eyjafjallajökull Visitor Centre. A grandiose sight to behold! 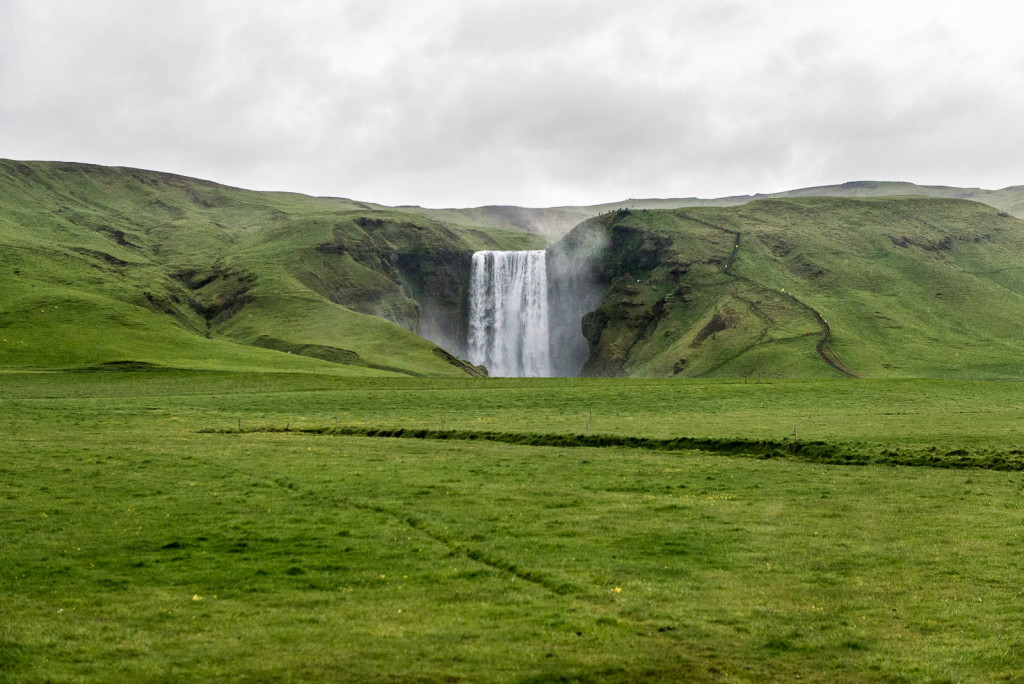 Due to the amount of spray the waterfall constantly produces, a single or double rainbow is normally visible on sunny days

And if you get up to the top you get rewarded for your trouble with a whole cascade of wee waterfalls and a charming canyon. In fact, around here it’s possible to get a few days trekking in: they say the paths and sights are perfect for walks – between two volcanoes and two glaciers. 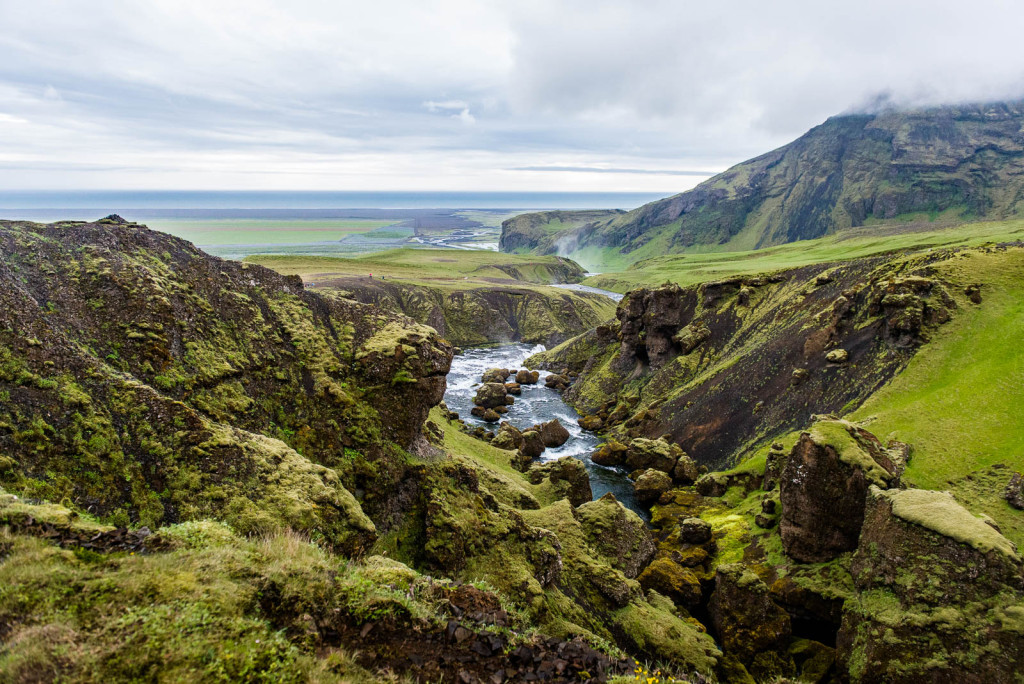 A trekking trail leads up to the Fimmvörðuháls pass between the glaciers Eyjafjallajökull and Mýrdalsjökull. It goes down to the Þórsmörk valley on the other side and continues as the famous Laugavegur to Landmannalaugar

Waterfall No. 5: Svartifoss. Still further along the coast to the east. Not all that large, but a most unusual looking waterfall! ‘Officially’ (according to info from the visitor center) it takes a good hour and a half to get there and back on foot. But there’s a secret: you can drive up the road most of the way, at the end of which there’s a nano-parking lot for 10 cars; from there it’s a mere 15 minutes to get to the waterfall, and none of the ‘wow!’ sights get missed! 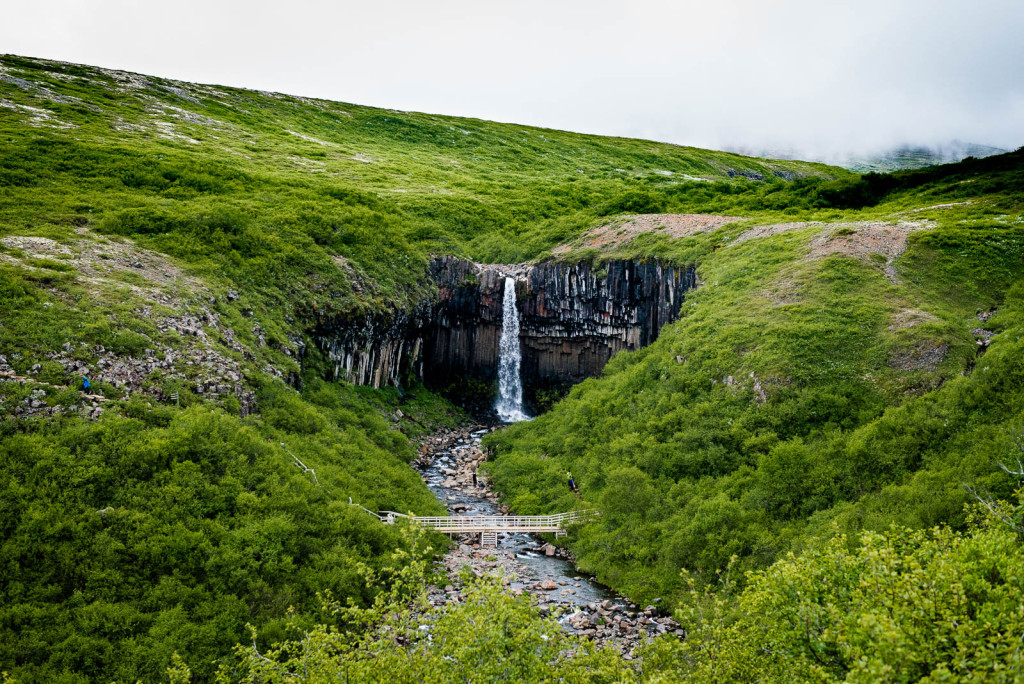 Turns out there are more than 20 wonderful waterfalls in Iceland; alas we got to see less than a quarter of them. Still, surely that’s plenty, no? Checking out 20+ waterfalls – wouldn’t that be overkill? You’d have to be a maniac to want to see 20+. You’d probably collapse from overexertion too…