Brainteasers, riddles, conundrums – they come in all sorts of types: from easy to ~impossible, those requiring logic, math, geometry, and/or plenty of other skills and competencies. But those tricky types – requiring higher mathematics, complex space, and formulas several pages long – you won’t find any of those in this blogpost. Here, they range from real simple to average-hard, since the last one – the Sudoku – was rather tough. So, without further ado, here are the six…

You have two pieces of string of differing lengths. If burned from one end, they both burn for exactly one hour. The speed of the burning varies all the time: for example, half may burn in almost the full hour, then the other half burns up in minutes; or the other way round. You have at your disposal only the two lengths of string and one cigarette lighter, nothing else. What you need to do is determine when 45 minutes is up.

You have some graph paper with 10 by 10 squares on it. You cut out the square in the top left and top right corners; that is – one square from two opposing corners. Now the question: how do you cover the whole of the surface with 2×1 dominoes? That is, how do you place (100-2)/2 = 49 dominoes on the graph paper (with just one level of dominoes) so that everything is covered?

This one’s to test the quickness of your wits. There’s symmetry here – almost:

One numeral needs to be moved to make the symmetry perfect. Which. And the ‘-‘ and ‘=’ don’t count.

You have a huge cake for you and 100 of your colleagues (before/after lockdown). The colleagues line up for a slice. The first colleague takes a mere 1% slice, the second – a 2% slice: 2% of the remaining cake. The third – 3% of remaining cake, and so on, until, the last colleague – the 100th – takes all that’s left. Question: who cut themselves the largest slice?

All these brainteasers are doable in your head. You can of course use a pen and pad, but they won’t really help.

And the most precise, witty, unexpected and other ‘most, mostest’ answers will get a prize: some serious antivirus protection – a boxless (contactless) version ).

What? Bored? Surely not! Surely you’re reading those novels you kept putting off, that autobiography; fixing that faucet, finally getting round to that long-overdue spring clean, no?!

Ok, let’s say you’ve done all such things (or not). And now it’s back to ‘bored’. Well here’s something a bit different to end that boredom – at least for… a few days: a particularly tricky spot of Sudoku!

Now, before the knee-jerk groaning and eye-rolling, just let me explain. This isn’t your usual easy Sudoku you get in those Sudoku magazines. Oh no. This one was sent to me with the comment: ‘The most difficult Sudoku there is!’. Fine by me – the harder the better!

Thing is, I’d never done a Sudoku before. Talk about ‘in at the deep end’! Still, I had plenty of time to focus on it, and only it – on my long-haul flight from Australia in March after the Tasmanian tour. And I seemed to pick it up fairly quickly. Well, relatively: as I was an absolute beginner it actually took me… around the whole flight; i.e., about a day! So, be warned – this isn’t something you’ll get done in minutes, even hours. And for the beginners among you, I recommend reading up on the rules first, and then to do some simpler ones first to get some practice in and get up to speed.

Meanwhile, for you pros out there, here you go; knock yourself out! -> 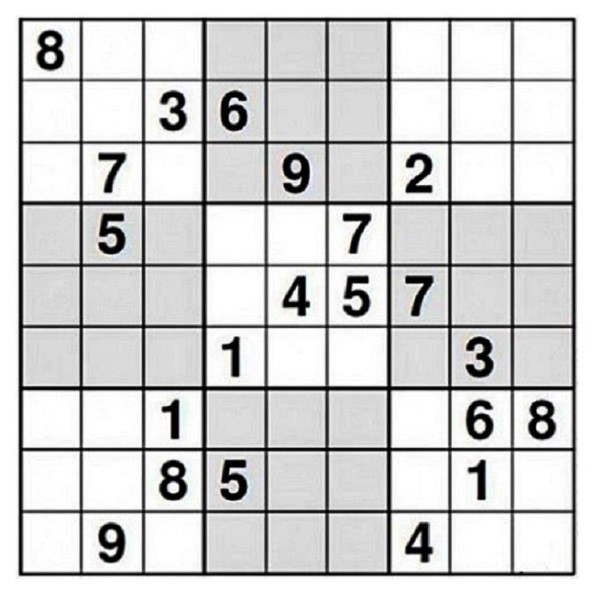