In my review of 2021, I gave a few teasing clues about some upcoming ‘super releases’ of our desktop and mobile products, going so far as promising that this year’s newbie-upgrades will be nothing short of being head-spinningly, show-stoppingly staggering. Well today, finally, in this here post – I’ll be announcing what’s what with all this super-release talk…

Actually, the word ‘super’ isn’t just me bigging up our new and improved tech and products; for we’ve gone and come up with a dedicated cybersecurity super-app for our users in which they can access, control, and tweak all their cyber-protection (plus computer hygiene) needs! No, you’re not having a dream. This is real folks!

All righty. I’ve got your attention, I hope. Now let’s dive in!… 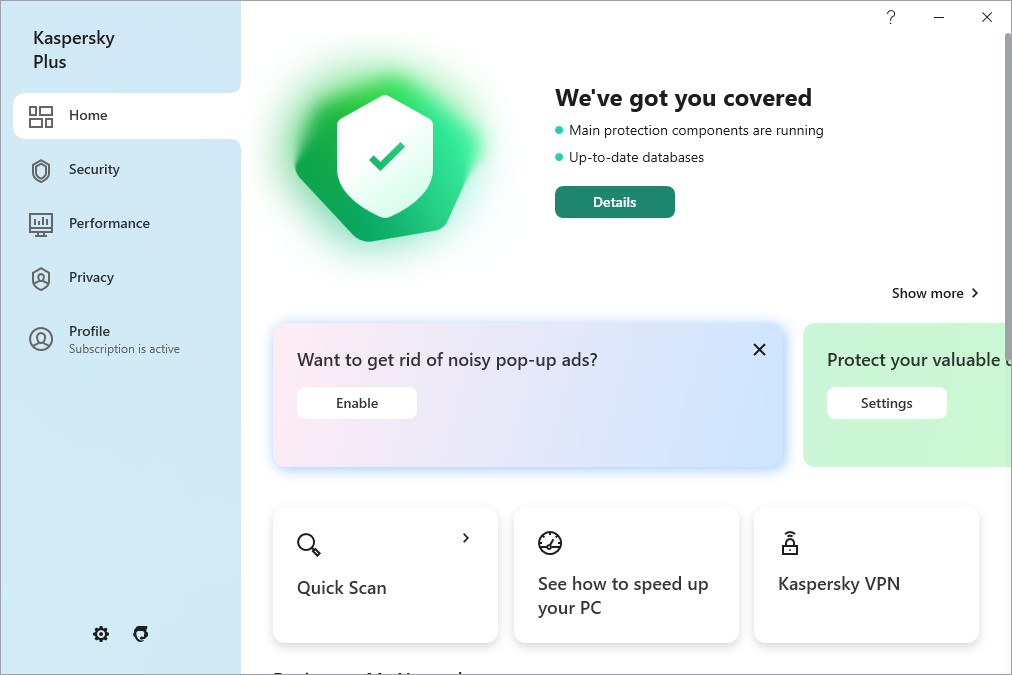 First, as per, a spot of background-history…

A lot of folks – including many who consider themselves tech-savvy – still think today’s cybersecurity software is basically antivirus. But this hasn’t been the case for ages already.

Indeed, today’s internet protection, compared with the antivirus many of us once knew during the 1990s and early 2000s, well – it’s like comparing… a space rocket with a bicycle. Back then, an ‘antivirus’ was basically just a scanner, which compared files being checked with a database of malicious programs. Various heuristic mechanisms were featured too, plus unpackers of all kinds of formats of office documents, archives and assorted othernesses, but, on the whole – that was about it. The main thing: it protected solely against viruses.

Today, the term Endpoint Security stands for multifunctional digital kit packed with all sorts of smart technologies capable of carrying out multi-layered checks of the host device’s cybersecurity. Good old signature scanners are still featured, but these days they’re just one of the many – necessary – basic layers of modern-day protection. It’s all a bit like a car today: there are all sorts of newfangled smart controllers and sensors, airbags, anti-skid devices, and so on – all to better protect drivers and passengers in case of accidents; but the first ever safety measure invented for cars – seatbelts – are still in every single new car sold today and always will be.

Now, each year we release new, upgraded versions of our home products: KAV, KIS, KTS, and the new kid on the block – KSC. We add new ‘beyond AV’ technologies, pump up the performance, give the interface a polish, and so on. And it’s a tried and tested, winning template: all’s good, sales go up, user satisfaction rises too. But as the years go by, a true, template-smashing breakthrough becomes the dream – the thing we really want: a breakthrough – based on our ever improved (literally best) technologies – in product marketing. To be able to offer the market something new: something more convenient, more pleasant, more reliable.

And that breakthrough came – in the form of an idea regarding a specialized super-app, which we approached from three directions.

First, we integrated all functions ensuring cybersecurity, performance optimization, privacy and personal data protection into a single application (available on all major platforms), to then allow the user to activate those functions according to a chosen plan. Hitherto, our products (KTS, Password Manager, VPN, etc.) have each lived separate lives. But being able to ‘conduct the whole orchestra’ via a single interface would be much more convenient.

Second, we connected to the super-app functions (including those from third-party developers) that lie outside our traditional comfort zone competence – cybersecurity. Thus, we created a new ecosystem for complimentary micro-services to help the user solve a broad wide range of tasks via a one-stop shop app.

Third, we got rid – finally! – of the word antivirus, because… why not? Our products long ago became so much more than providers of protection against mere viruses. These days, they’re more about being anti-anything-bad and pro-anything-good!

The idea turned out to be not only a breakthrough, but also rather difficult to put into effect. We started work on the project two years ago, but now, today, here – finally (hurray!), it is with much satisfaction and immense pride that I present to you our new product line for home users! Introducing… ta-da! ->

Literally everything here is new: the packaging, name, interface, features, and even how it’s used: it’s based on the new industry standard – subscription.

The new app comes in three different flavors plans: Standard, Plus and Premium. Users choose one depending on how much functionality they need and how much they’re willing to pay. All the plans are cross-platform: whether you prefer to do your shopping using a laptop or a smartphone, it should be equally safe.

In Standard, there’s the bare, essential minimum of cyber-protection at an attractive price. There’s also a useful set of tools for optimizing computer performance for both desktops and mobile devices (startup audit, disk clean-up, auto-updating of apps, searching for system registry issues, and so on) + basic privacy features (detecting stalkerware, and web-camera and microphone blocking).

And Premium – everything but the kitchen sink.

First: priority technical support, which includes expert help not only for product installation and configuration, diagnostics, and remediation of cyberattacks, but also on overall computer performance optimization and health monitoring.

Second, protection of a user’s ‘digital persona’. This is an encrypted “digital wallet” where you can store your passport, driving license, bank cards, and other important documents, opening them from different devices as required – with more cool new functions appearing a bit later. 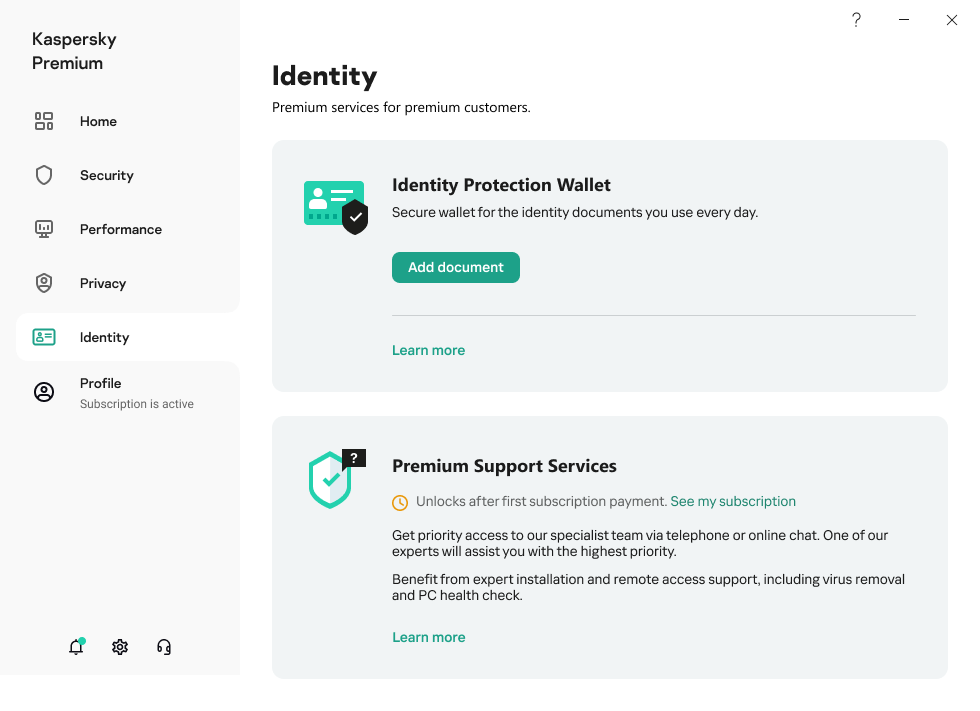 The horizon of possibilities.

The super-app concept represents a quantum leap in creating a new experience for using digital products and services. It’s also one of the leading global trends in software development. I won’t mention the IT companies that have applied the super-app concept in successfully consolidating their business into a single platform, but I’m sure you know which I mean anyway. Well, we’re in on the super-app thing now too – moving all our upgraded products over to the format for some super-streamlined results. What’s more – it will be in our mobile apps as well as our desktop ones.

The move to super-appyness took considerable efforts here at K across various departments, but perhaps the most fundamental task related to changes to the user interface. In fact, they were less ‘changes’ and more ‘rebuilding from scratch’ – taking into account future adaptability and scalability of the ecosystem, and also personalizability (is that a word? It is now:) for each user.

Besides, we have big plans for (i) developing our own complementary micro-services, (ii) acquiring independent developer-companies to further expand our super-app ecosystem, and (iii) inviting other third parties to the platform. And we’re real enthusiastic regarding the prospects of introducing adaptive behavior to the super-app depending on, say, the epidemiological situation across the internet, the level of ‘health’ of protected devices, what’s going on in the news around the world, and assorted other circumstances.

Our goal is to become an obliging assistant helping out in dealing with scores of life situations connected with cybersecurity, privacy and performance – and to stop being a neglected icon on the taskbar! Indeed, the name of the game from now on is having meaningful product-related contact with users.

I’m super appy to announce we’ll be introducing the new super-app-powered product line gradually across different regions of the world, completing the global roll-out in a few months. During August it’ll become accessible to some users in the U.S., Canada, the UK, Australia and New Zealand; a little later, Brazil and several European countries will be added, and then the rest of the world.

The move to the new plans will be offered to all users of existing products when renewing their licenses, with the opportunity to get a free upgrade to the new functionality. It can’t get any fairer than that.

And remember – don’t worry, be super-appy! 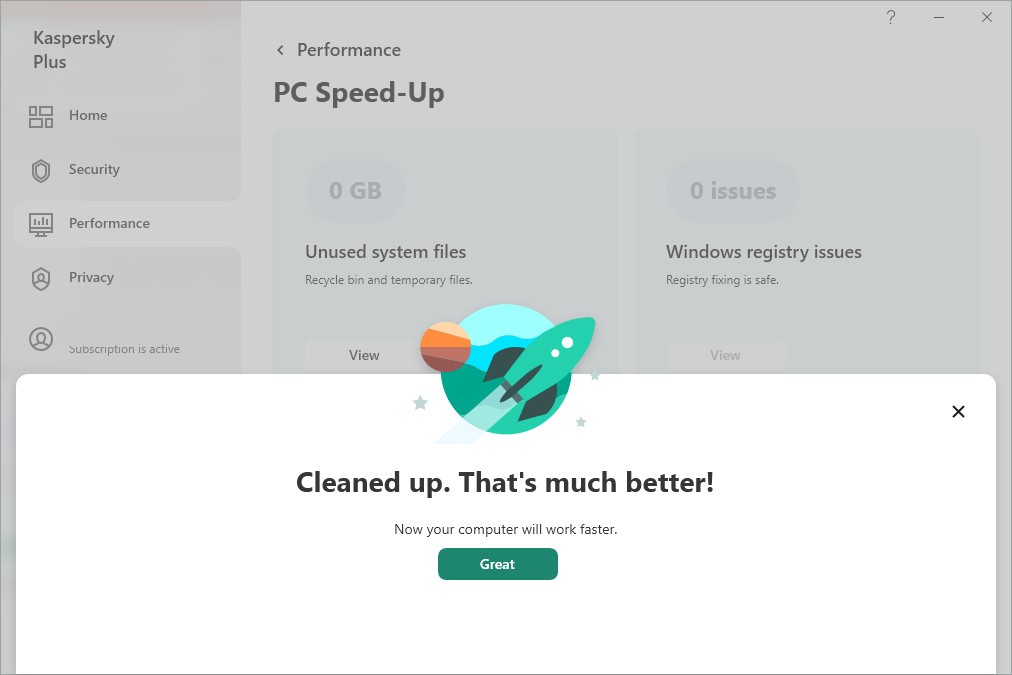