Travertine? Never heard of it? Is it an indie band? Is it a type of floor covering? Is it an errant world-traveler? Actually, none of those. Actually, if you don’t know what it is, that might just point to the fact that you’ve never visited Pamukkale in Turkey. For if you had, that’s where you’d have learned that this, is travertine! ->

The terraces of Pamukkale, which means “cotton castle” in Turkish, are without a doubt among the most beautiful and unique natural objects on our planet (so, of course, they feature in my Top-100 Most Beautiful Places in the World). The travertine is the sedimentary rock deposited by mineral water at the exits of the hot springs here that has formed a colossal cascade of pools with stalactites hanging down off them – and everything as white as snow.

Such a fantastic spectacle… of course it’s going to be popular with tourists: 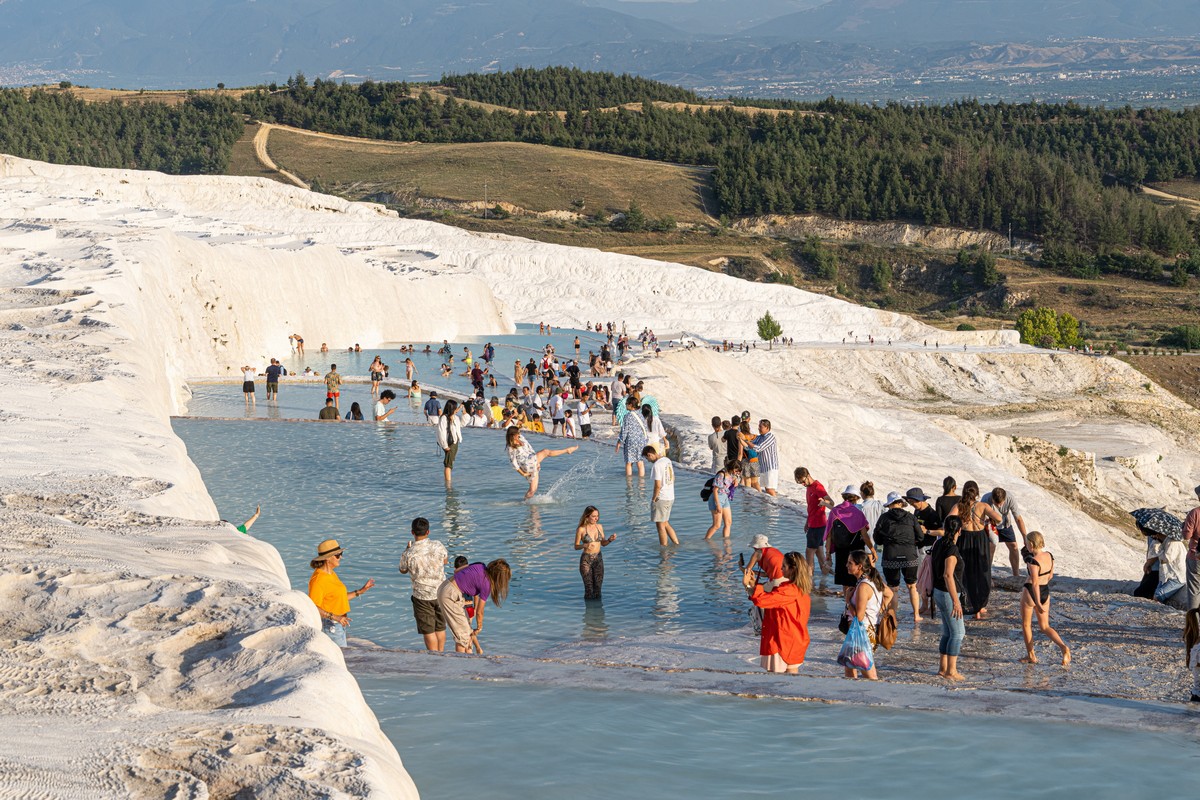 They’ve constructed a path across the terraces, and formed some rather large pools for folks to frolic in. But you need to take your shoes and socks off – barefoot only here, so as not to cause any damage to the fragile surfaces.

And you have to keep to the path, about which you’re reminded often; alas, some curious tourists ignore the warnings… 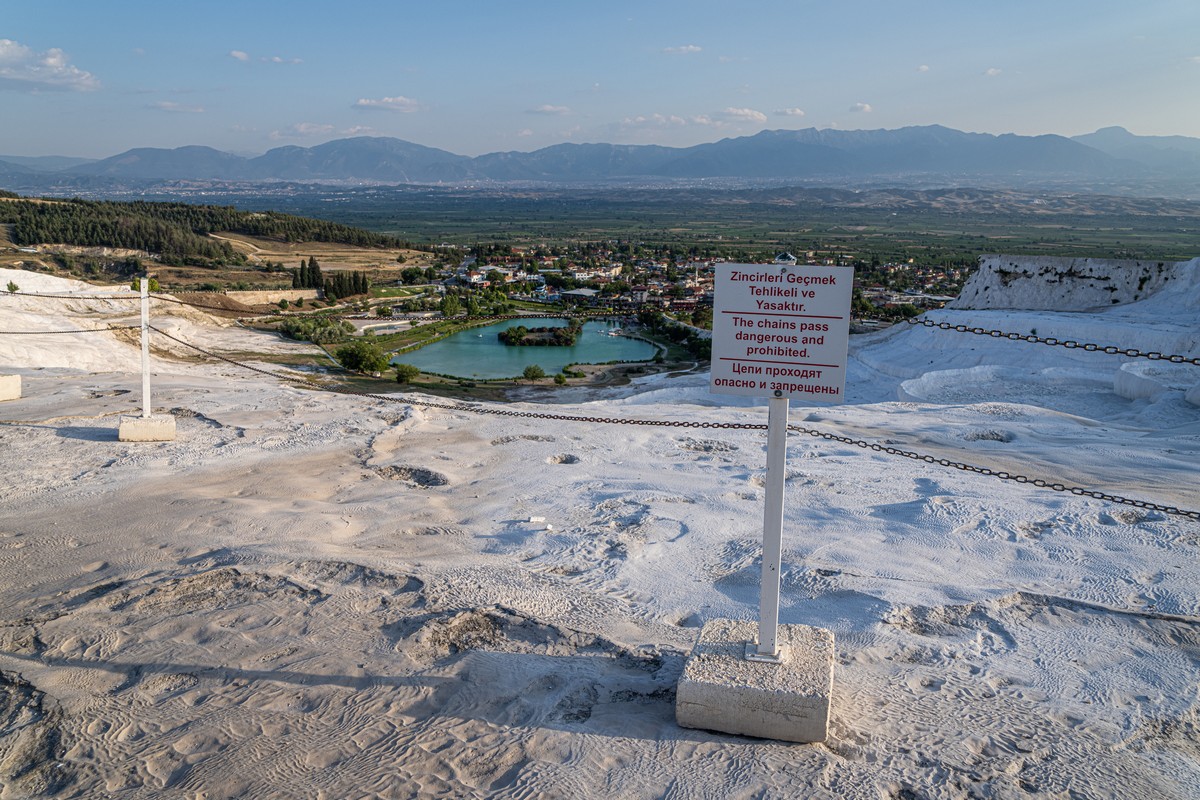 It’s a popular spot for photo-shoots of assorted kinds: 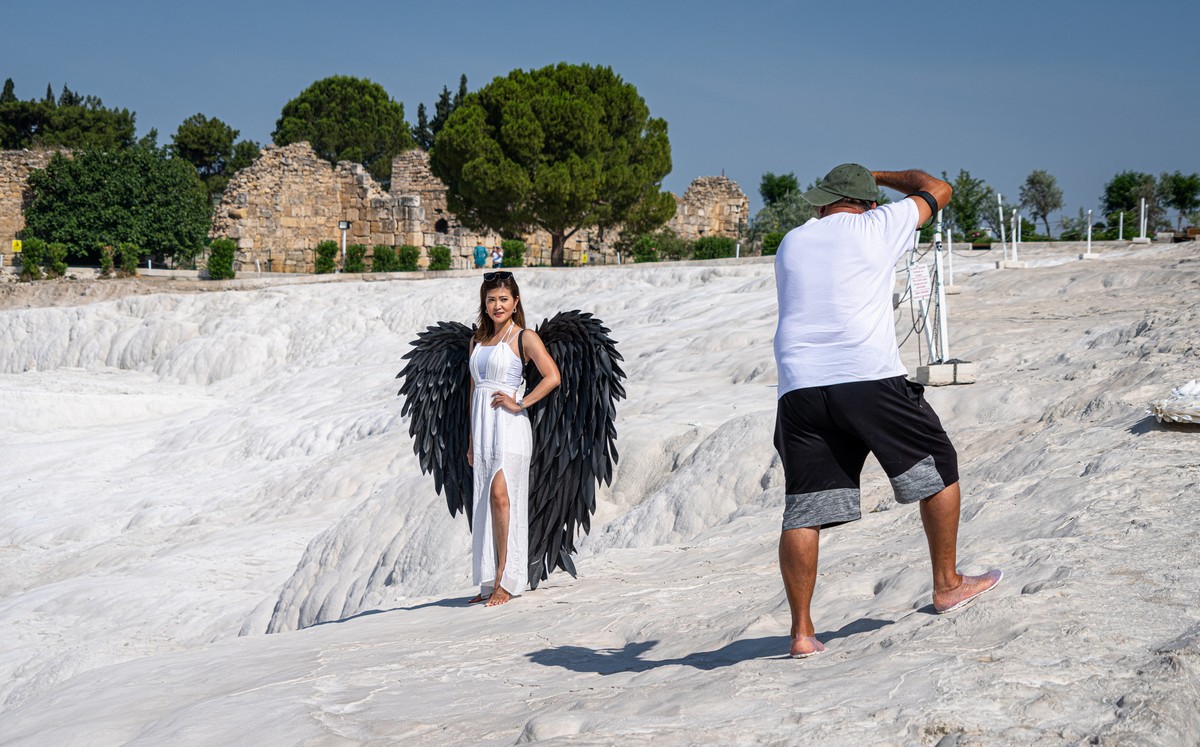 And I put my camera to a lot of use too:

The surrounding scenery is also very kind to the eye:

I recommend a stroll along the full length of the path. And it’s probably best to go from top to bottom, but to do so you’ll need a backpack or other bag to place your footwear in. Best of all, IMHO, is doing the full length of the path… twice: once in the morning just after sunrise, and in the evening – you guessed it – at sunset. I say this as the lighting between morning and evening is so very different. For example, of an evening the tones are subdued:

While of a sunny morning, everything’s glistening brightly:

Some terraces look better of an evening, so it’s good to get both chronological versions of all of them:

This was my second time here; my first was way back in 2004 – also in summer – after a regional partner conference. Alas – no pics from 18 (!) years ago, as I wasn’t such a happy-snapping photography buff back then. The only things I recall are how crazy hot it was, and that practically all the pools were dry – they’d been drained of the highly-mineralized water. These days – it’s half and half: some pools dry, others full: 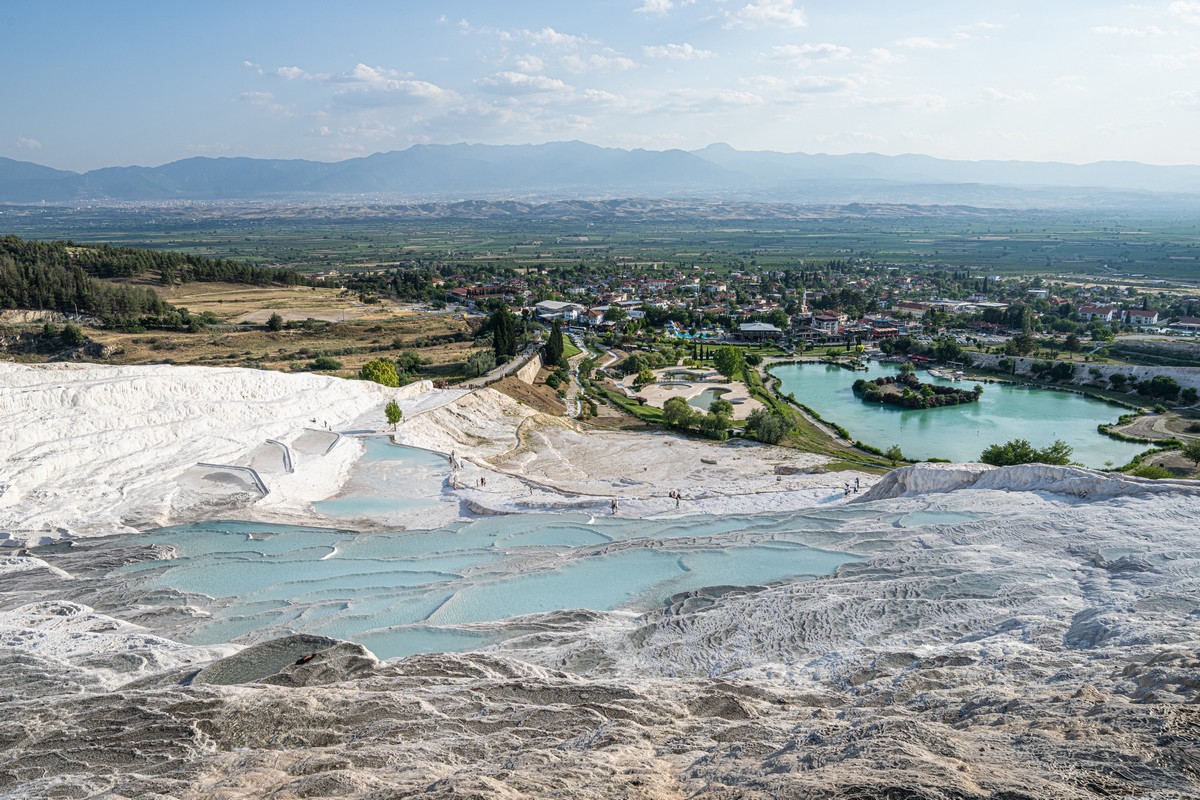 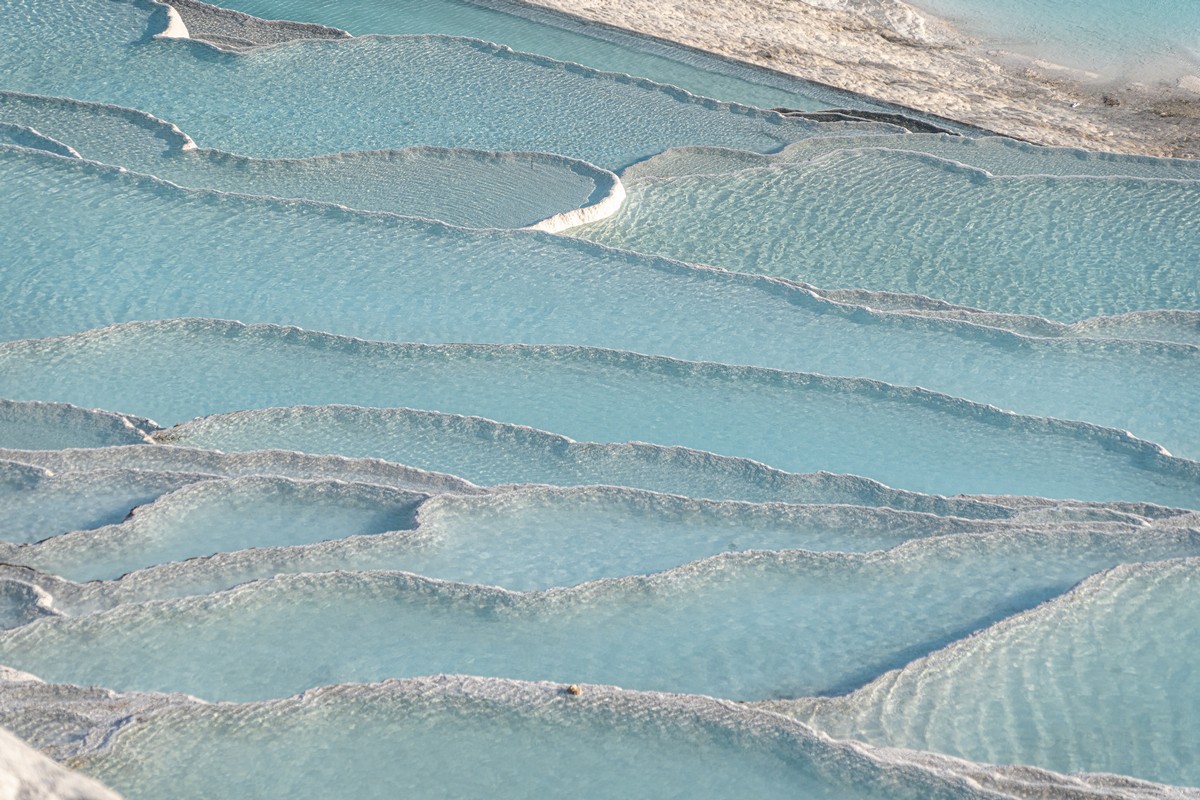 And this is how they drain them: with a system of run-off canals ->

And here’s where the water ends up -> 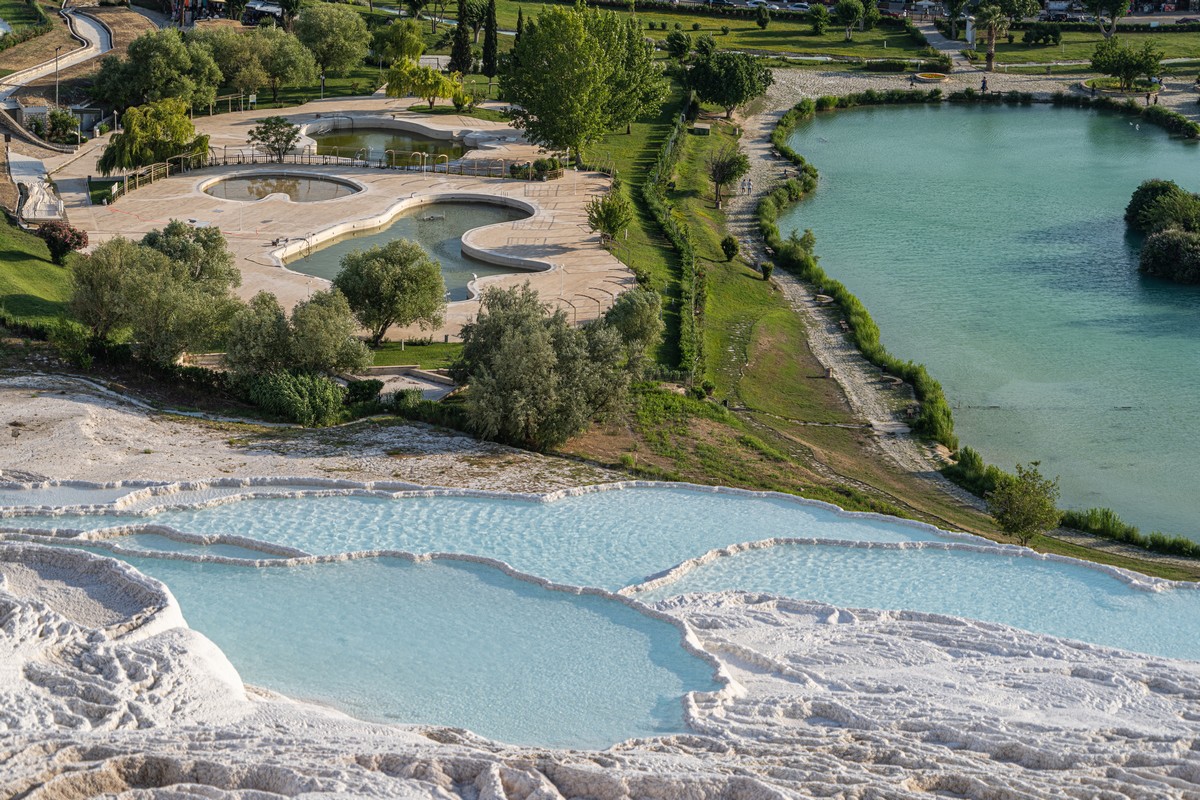 And by the looks of the old waterway constructions, they’ve been employing such a drainage method for thousands of years: 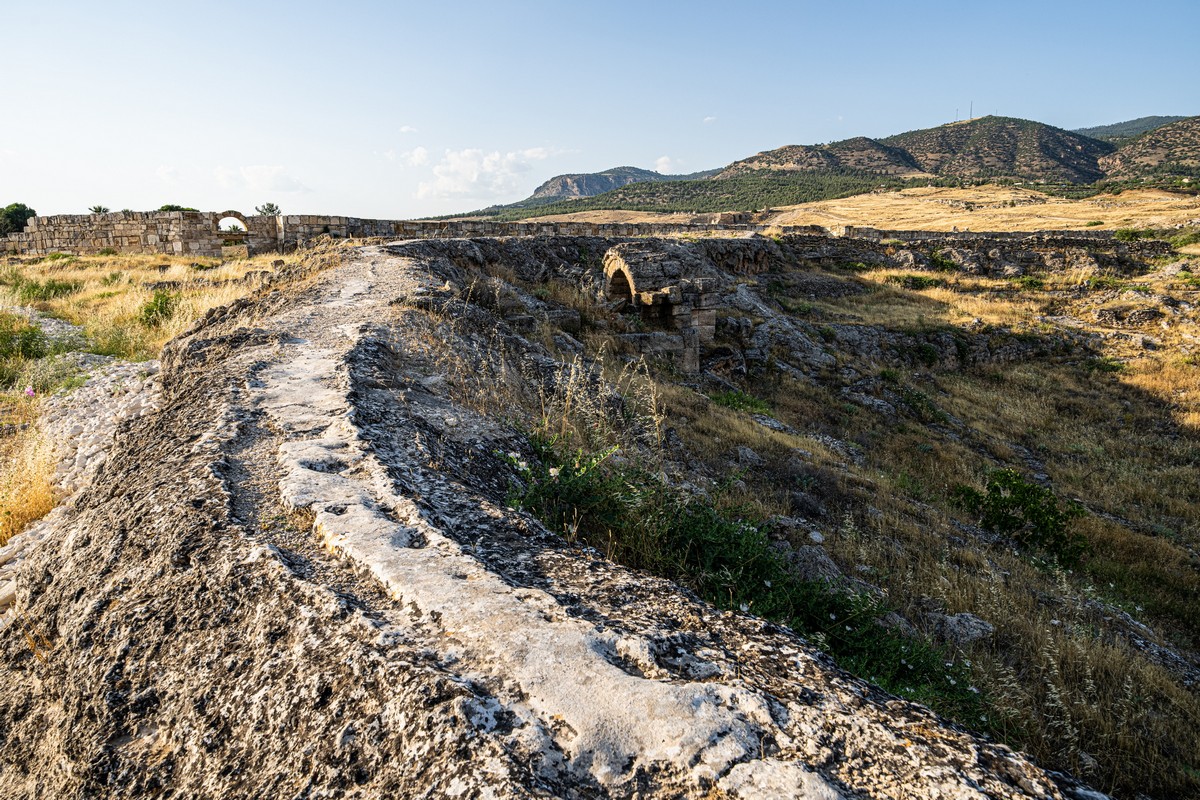 Both filled and dry pools each have their own particular charms:

So there you have it folks. Pamukkale. Travertine supreme! Highly recommended!…

And that was that. We head to the exit… 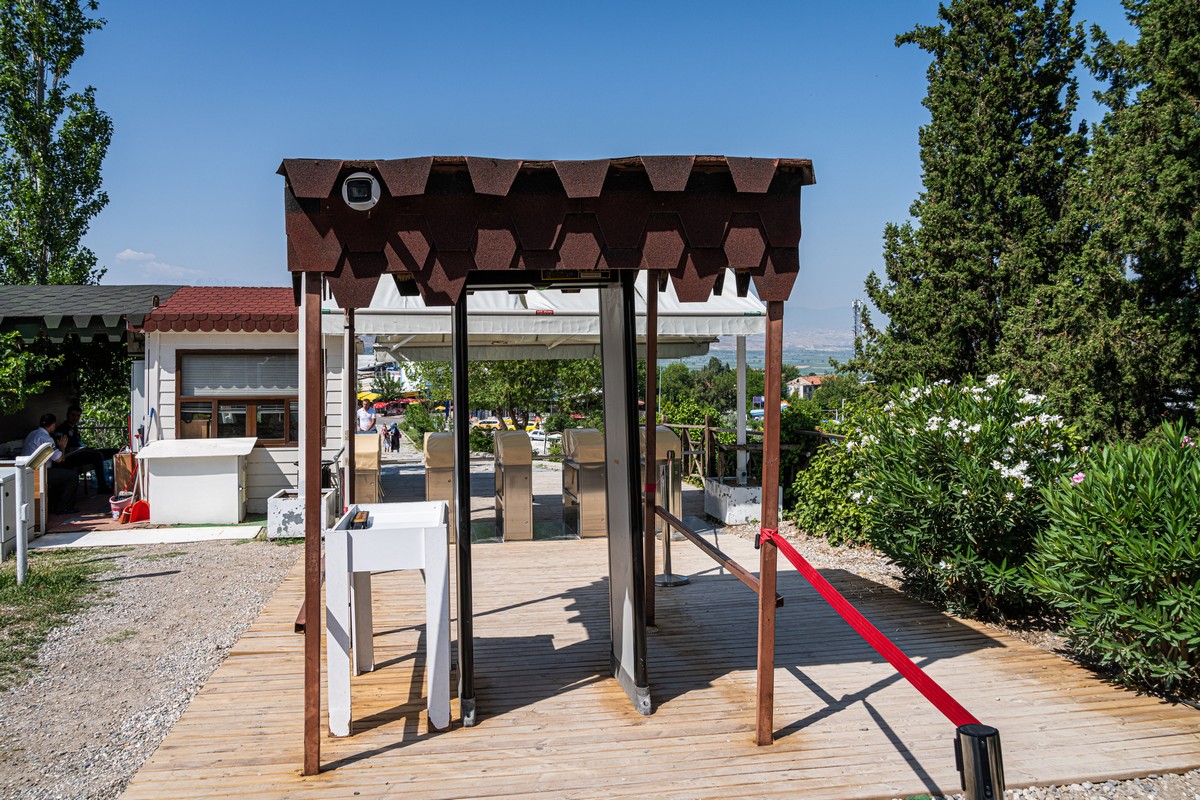 But a report on the travertine terraces of Pamukkale wouldn’t be complete without mentioning other similar locations. They’re aren’t many, but they are some…

Possibly the most magical are the terraces in the Sichuan province of China – the Huanglong valley. Cascading lakes, waterfalls and brightly-colored pools. Been. Snapped and reported on. In the same province there are also the white terraces of Baishuitai – like Pamukkale but not as large. Not been. Must get myself there…

The most terrific travertine terraces that ever existed were probably those near Mount Tarawera in New Zealand. I say were as they were destroyed by a volcanic eruption way back in 1886. The Pink and White Terraces they were called, and they were so terrific that they were deemed the eighth wonder of the world. Btw, a geyser there would spout water some 400 meters high! Alas, it’s been inactive for over a century.

The rest of the photos from Pamukkale are here.