After our overnight stay in Khandyga, it was back on the road and heading for Yakutsk. Thing is – that stretch of road to Yakutsk was so thoroughly boring that there’s absolutely nothing of interest to report to you, dear readers. Accordingly, I’ve fast-forwarded to Yakutsk; for there can never be anything boring about the extraordinary Siberian city of Yakutsk…

Here‘s a primer for what the city’s all about – from last year. We basically repeated much of the itinerary detailed in that post, so I won’t duplicate here. As to this year’s novelty…

We visited… the dockyard of Zhatay, just outside Yakutsk. A dockyard? Eh?! How could that possibly be of interest to a group of very well-traveled – seen-practically-everything – tourists? Actually… 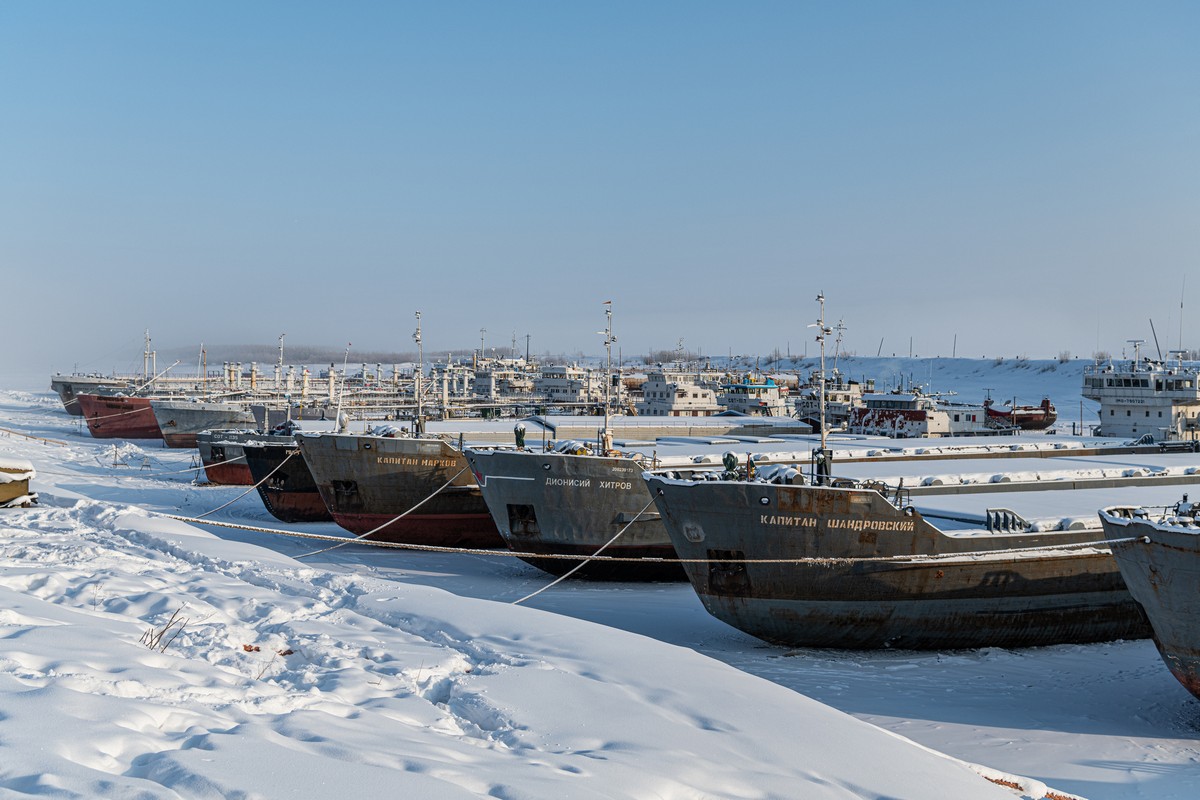 …Actually, there is something unique about these river docks. Soon, 100 – 130 boats/ships will be navigating the Lena river here. But some need repairing…

However, there aren’t enough dry-docks here – the kind you need to access and repair the underside of a ship, the propellers, etc. So they came up with a unique alternative to dry-docks. Simply put – they cut away the ice around the part that needs to be accessed! Kinda like this: 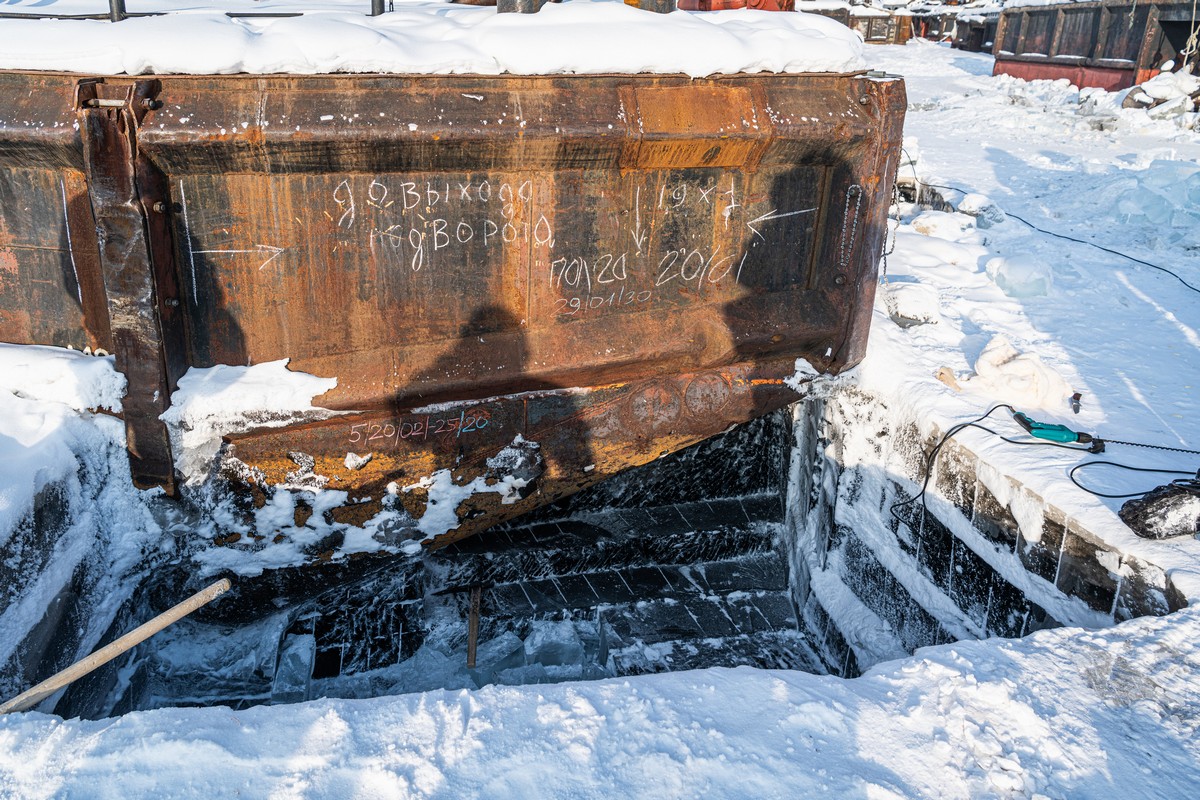 But it’s not that straightforward. What they have to do is cut away a layer at a time, gradually. They first cut away – rather, saw away, with a chainsaw – the top layer of ice. Then they wait – for the river water underneath to freeze to the required depth, and they go again at the newly-formed ice with the chainsaw, on and on like that until the part of the ship that needs working on becomes accessible: 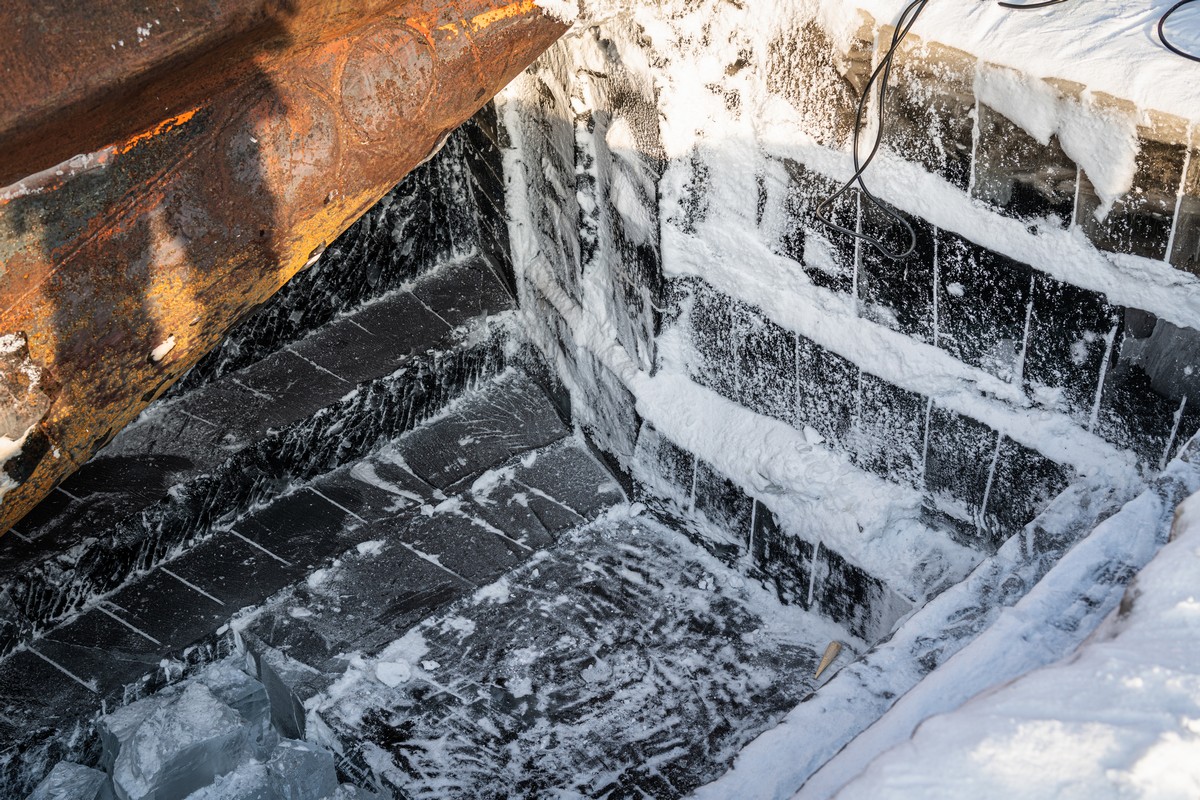 I’m sure maritime-naval buffs who live in warmer climes would find this way of doing things curiously and exotically unexpected ). 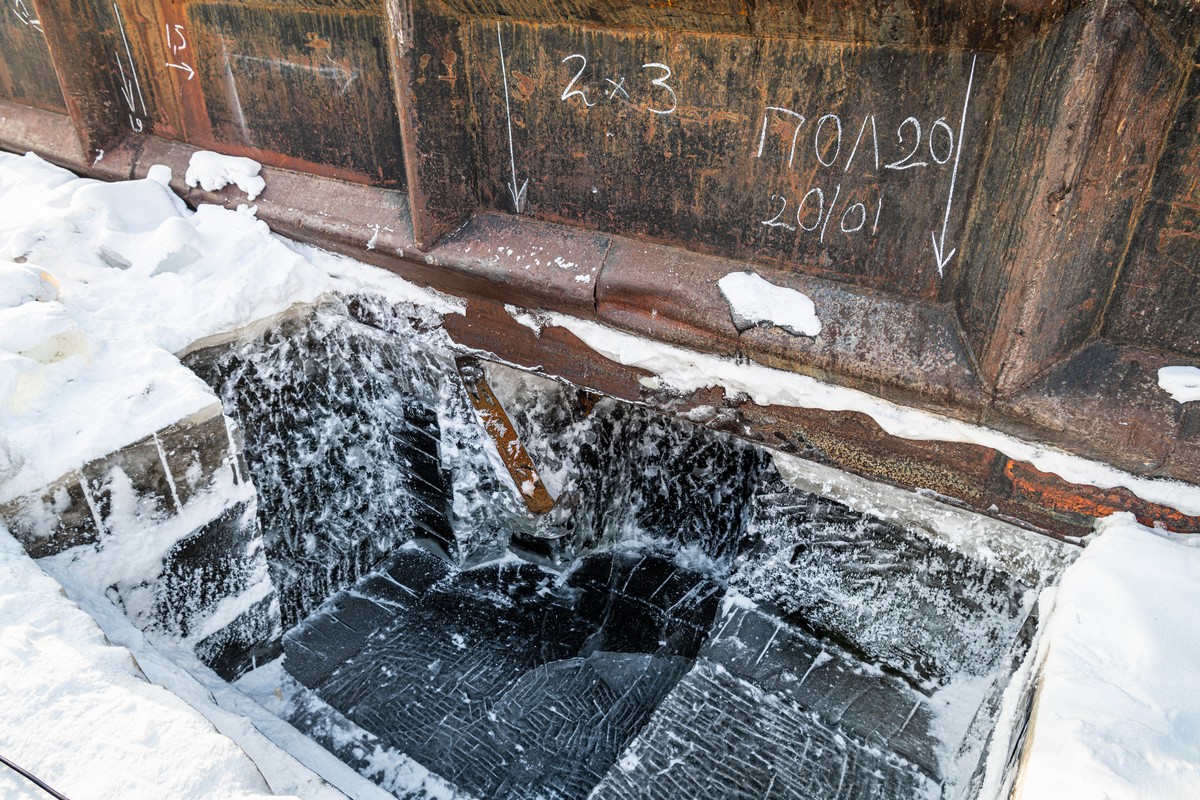 Here’s a whole trench dug out of the ice – probably to get access to the propeller. You can see the blocks of ice that came out of it to the left: 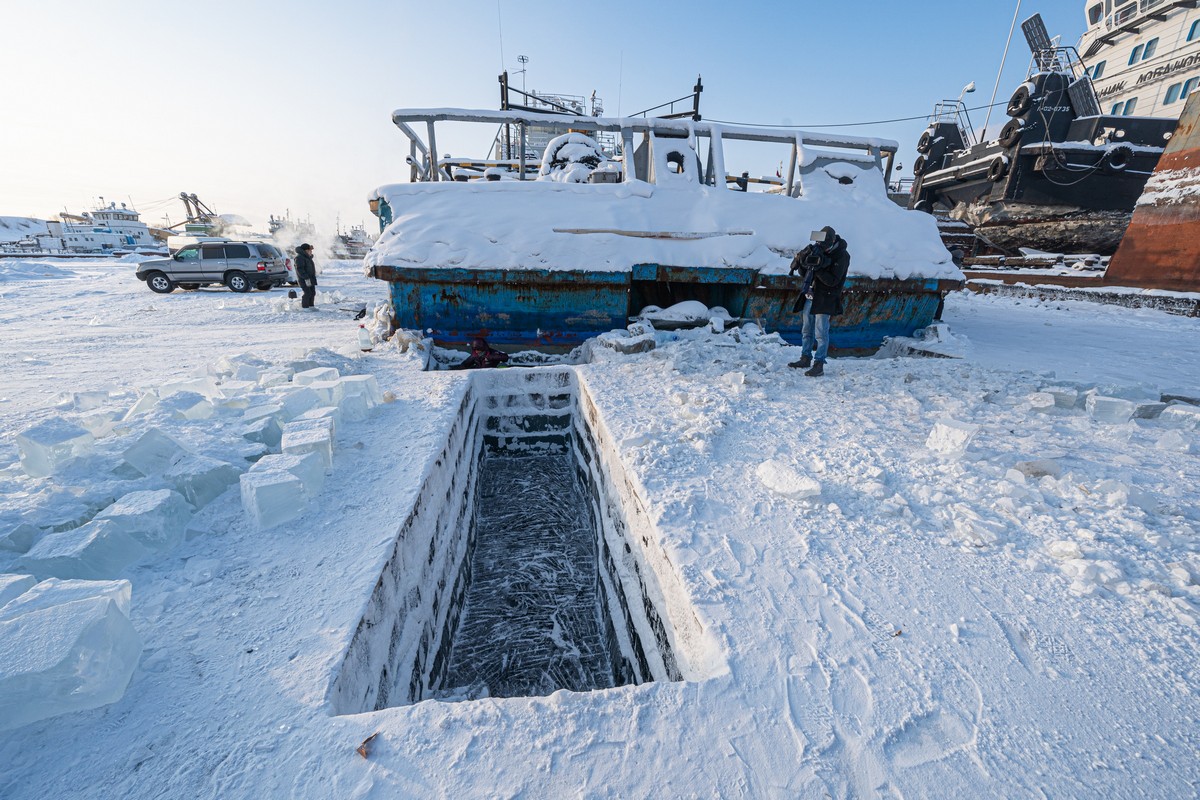 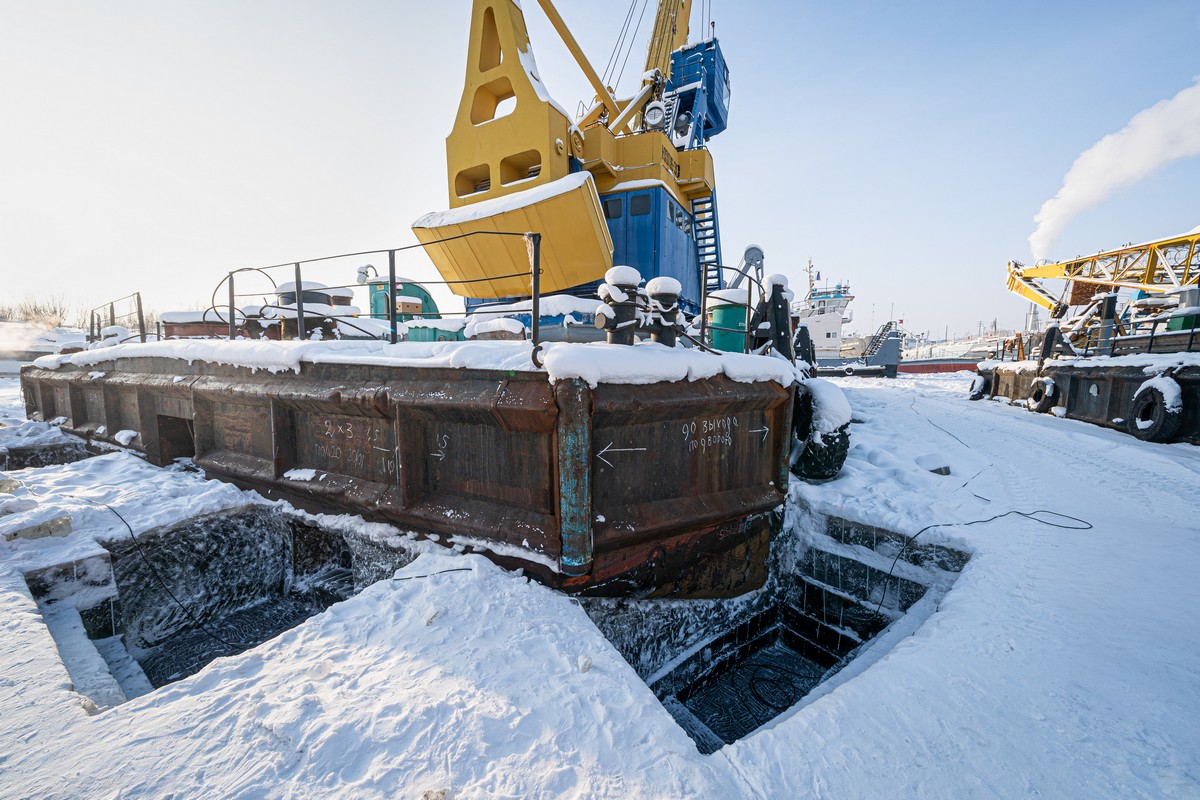 A ship with… wheels! Apparently the tides here don’t change much, and the level of the water in the Lena is sometimes real shallow. Accordingly, only ships whose undersides don’t go deep are suitable; best all though – ships with wheels for when it’s simply too shallow for a ship to float above the riverbed: 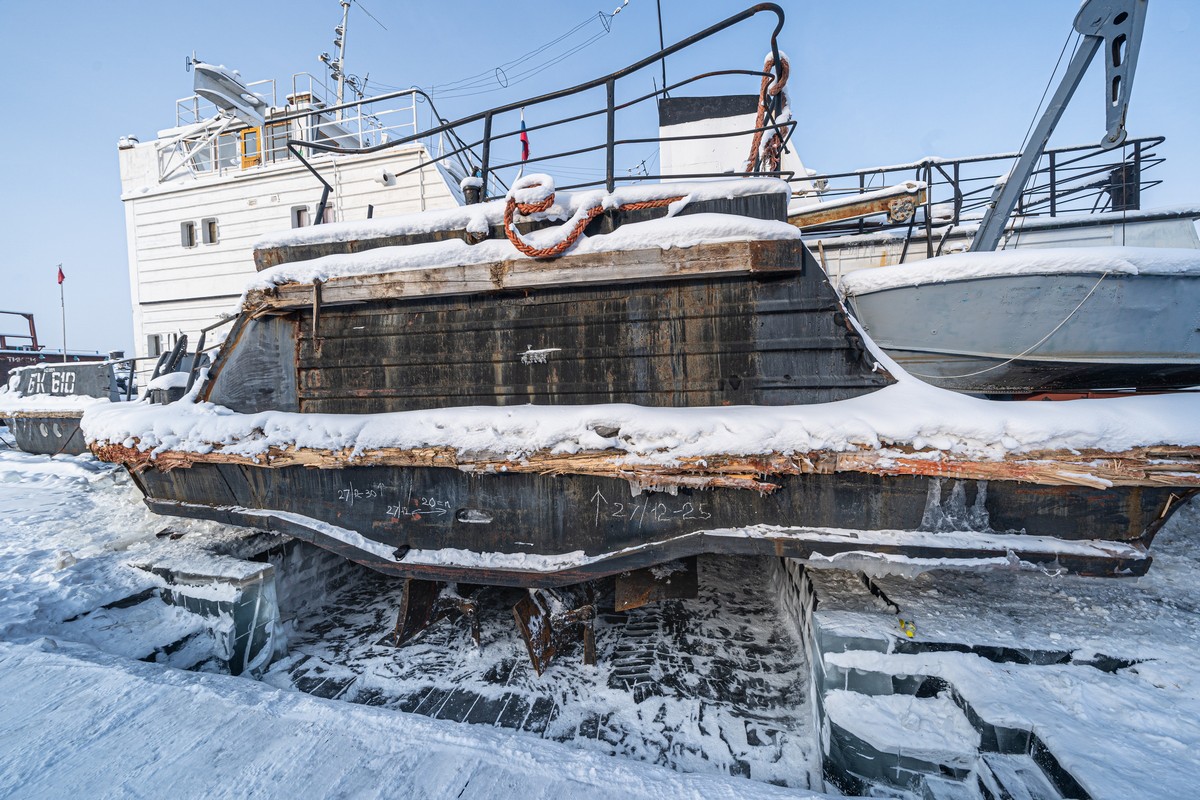 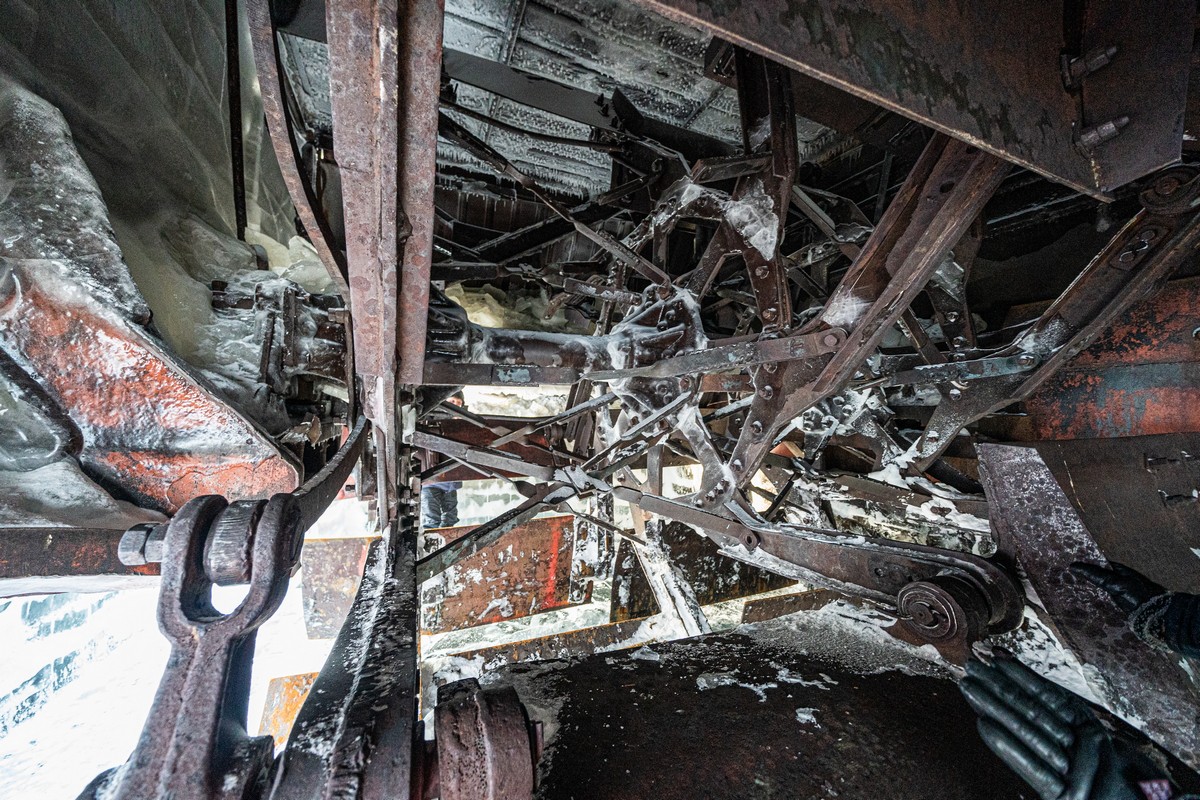 The guys who do the ice-sawing – also one lady – apparently get good pay. Just as well for such physically-demanding and no doubt dangerous work outside in the cold: 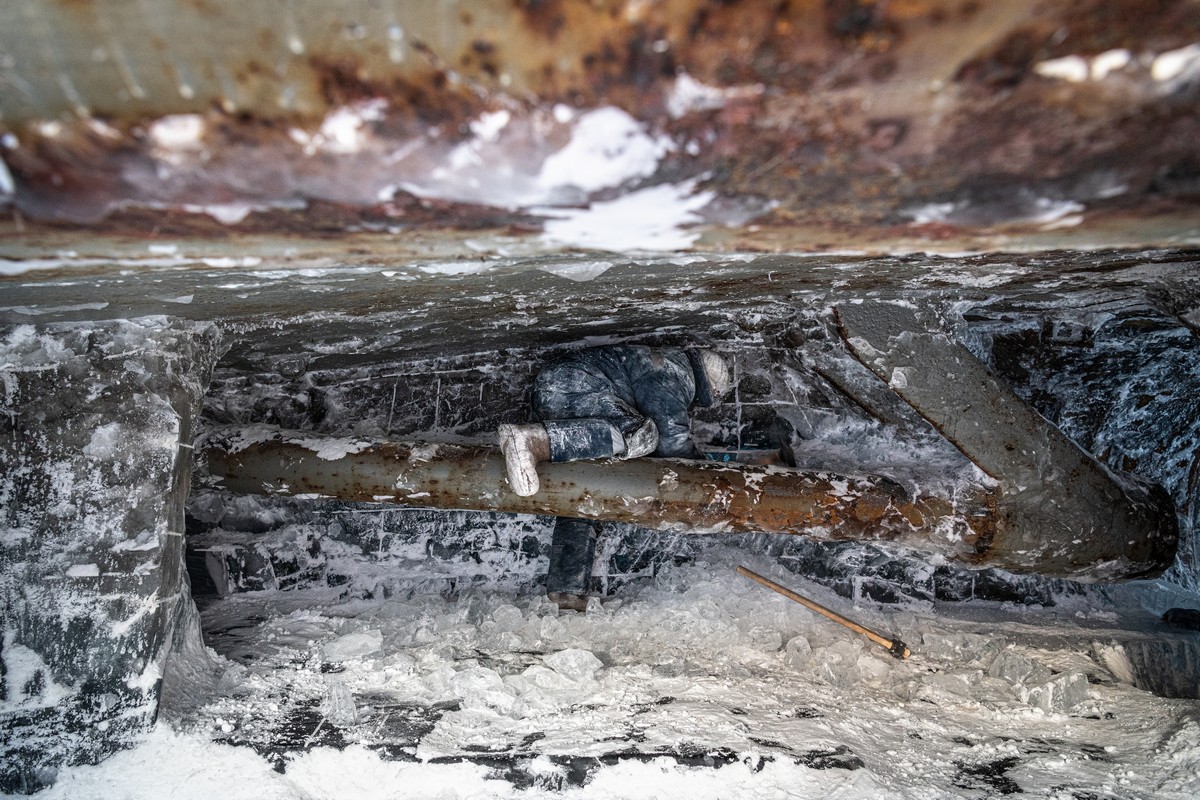 Here they are with pick-axes and chainsaws! ->

Ships aren’t only repaired here; they’re also constructed from scratch. And of late – new shipbuilding production facilities are being built: 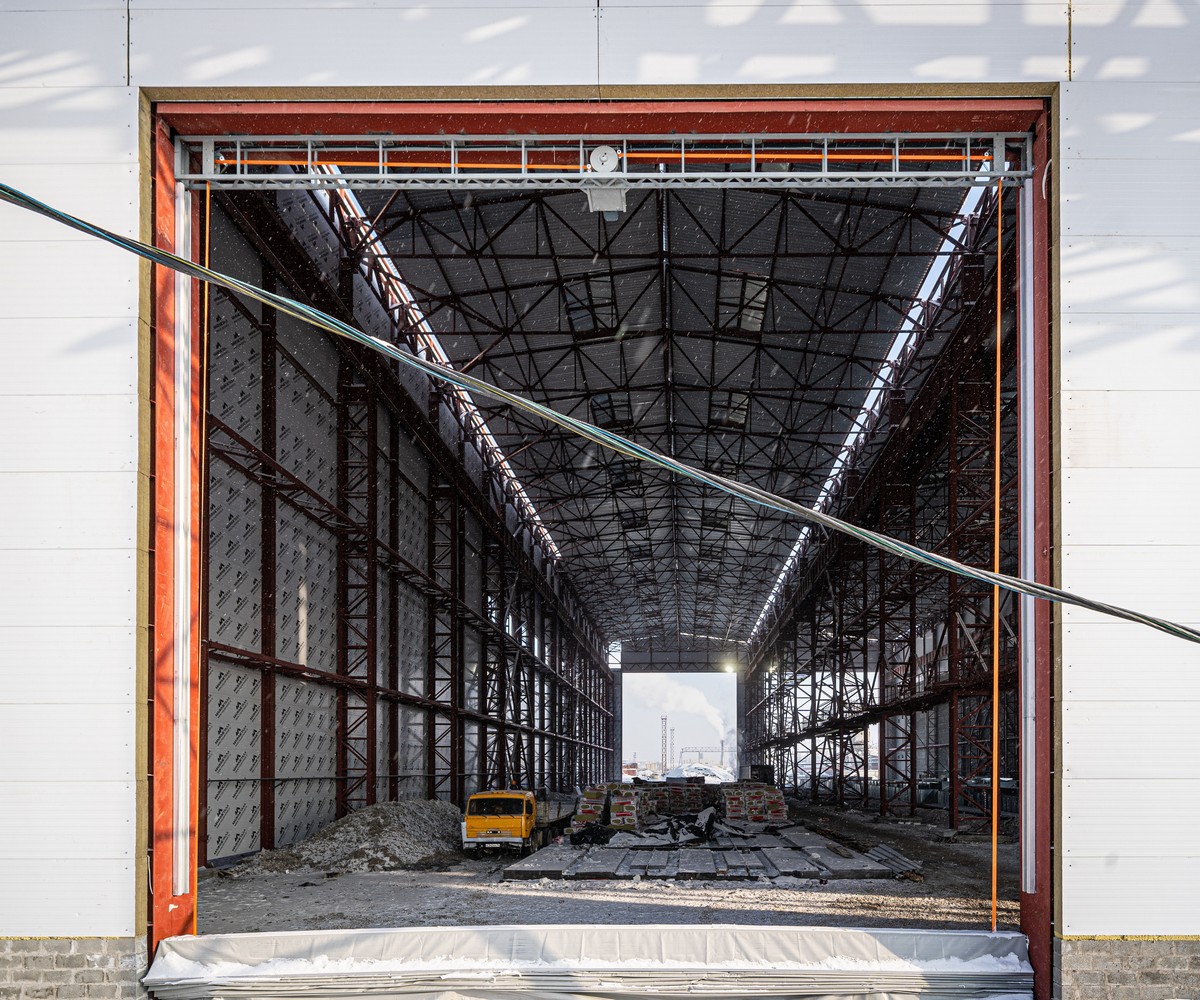 And a few photos taken by DZ: 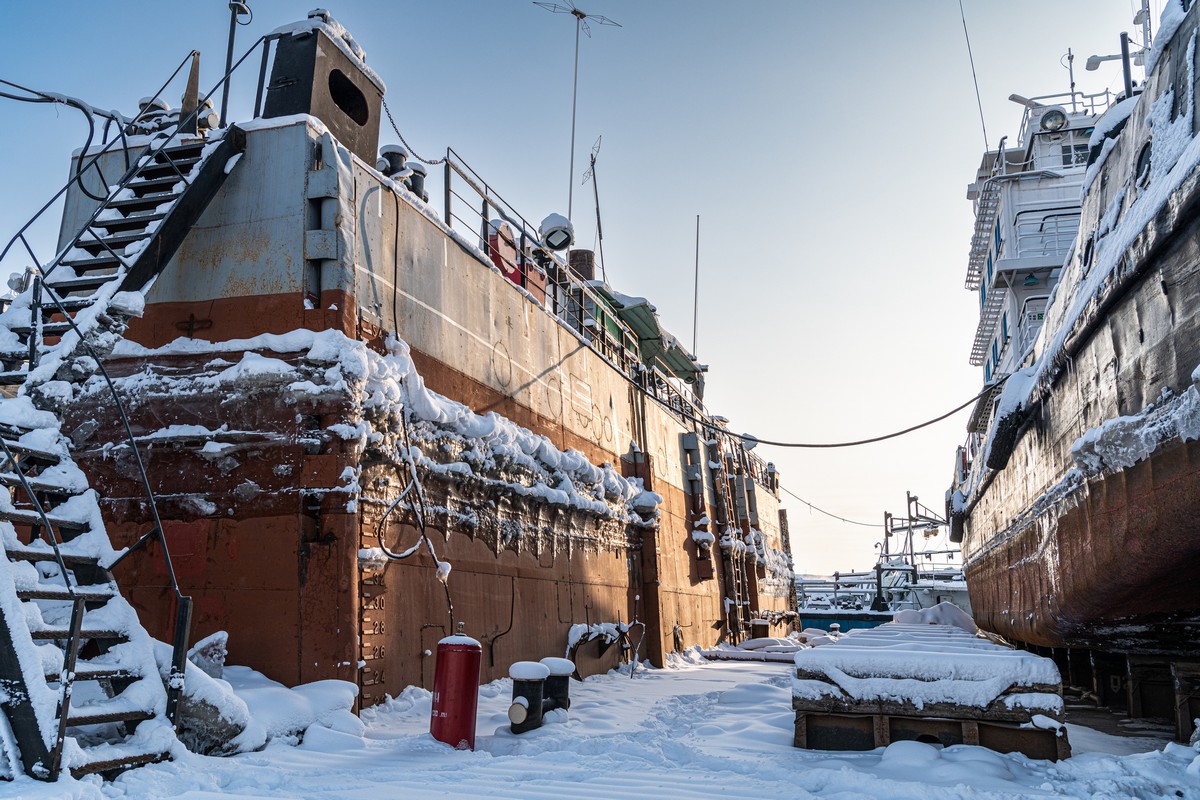 Needs a caption; any ideas? -> 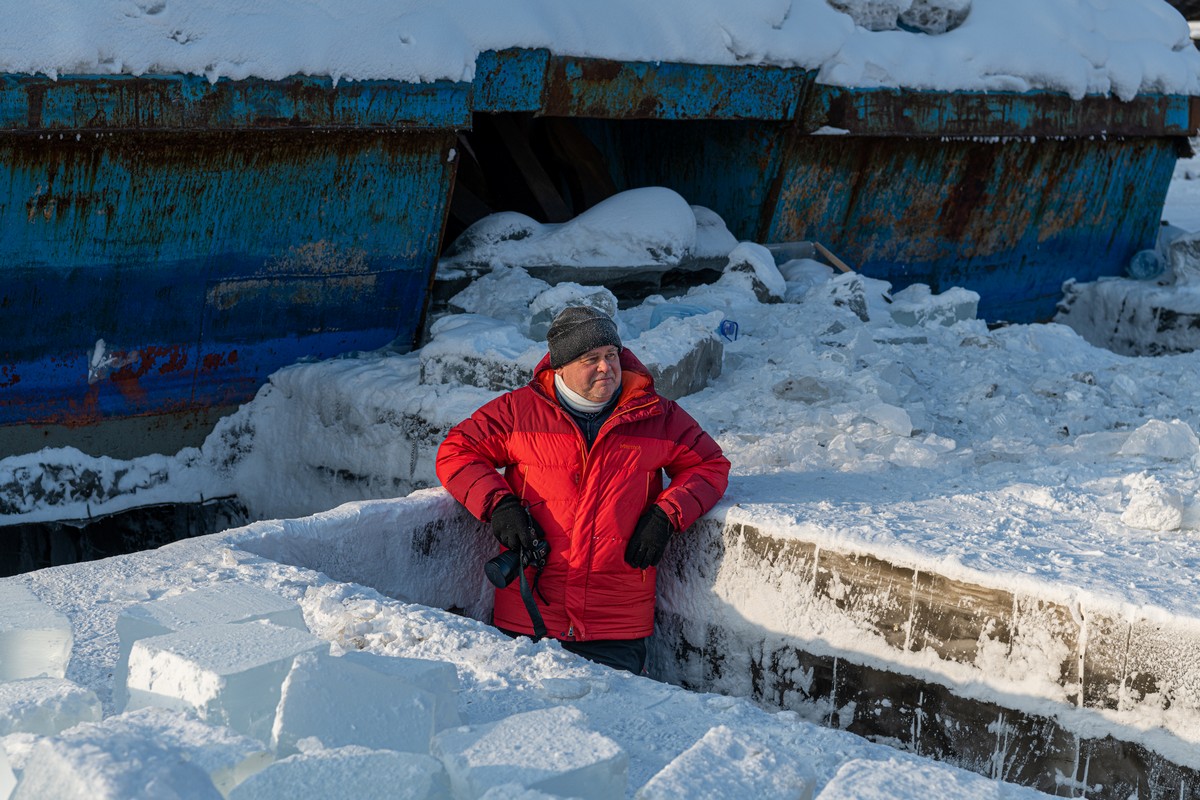 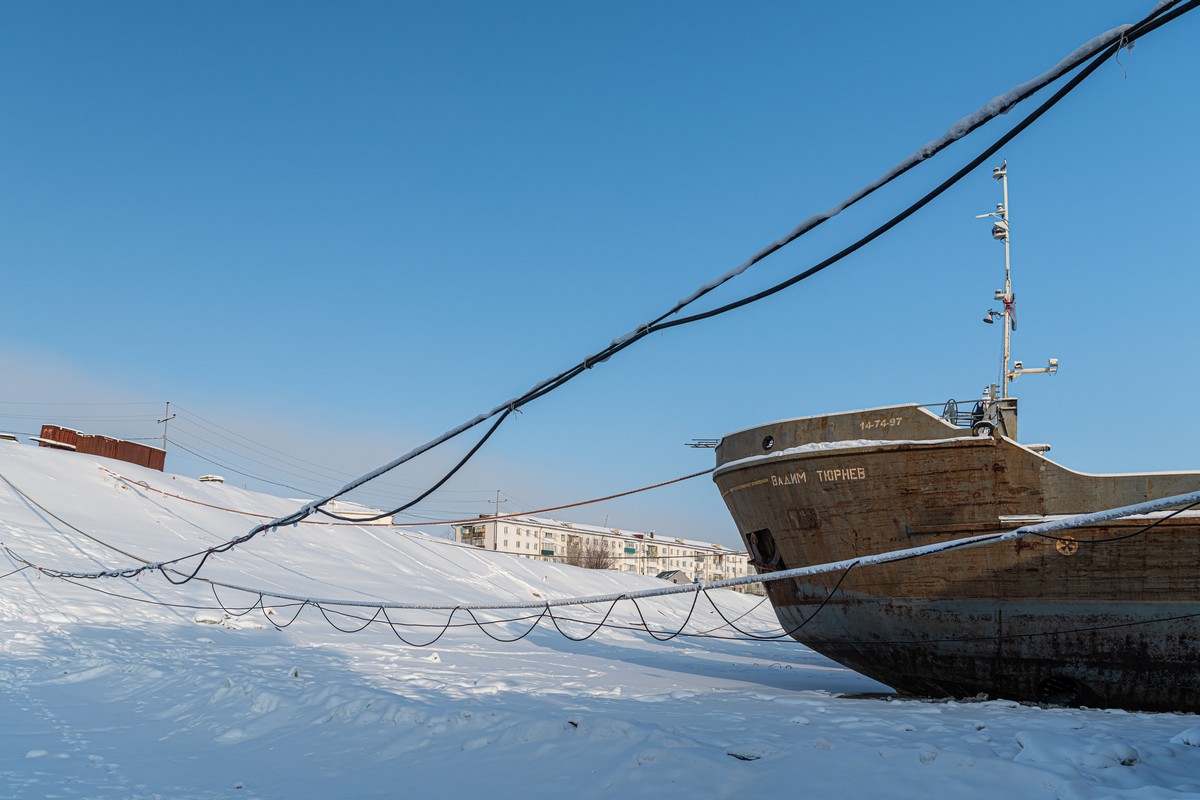 The press caught up with me… 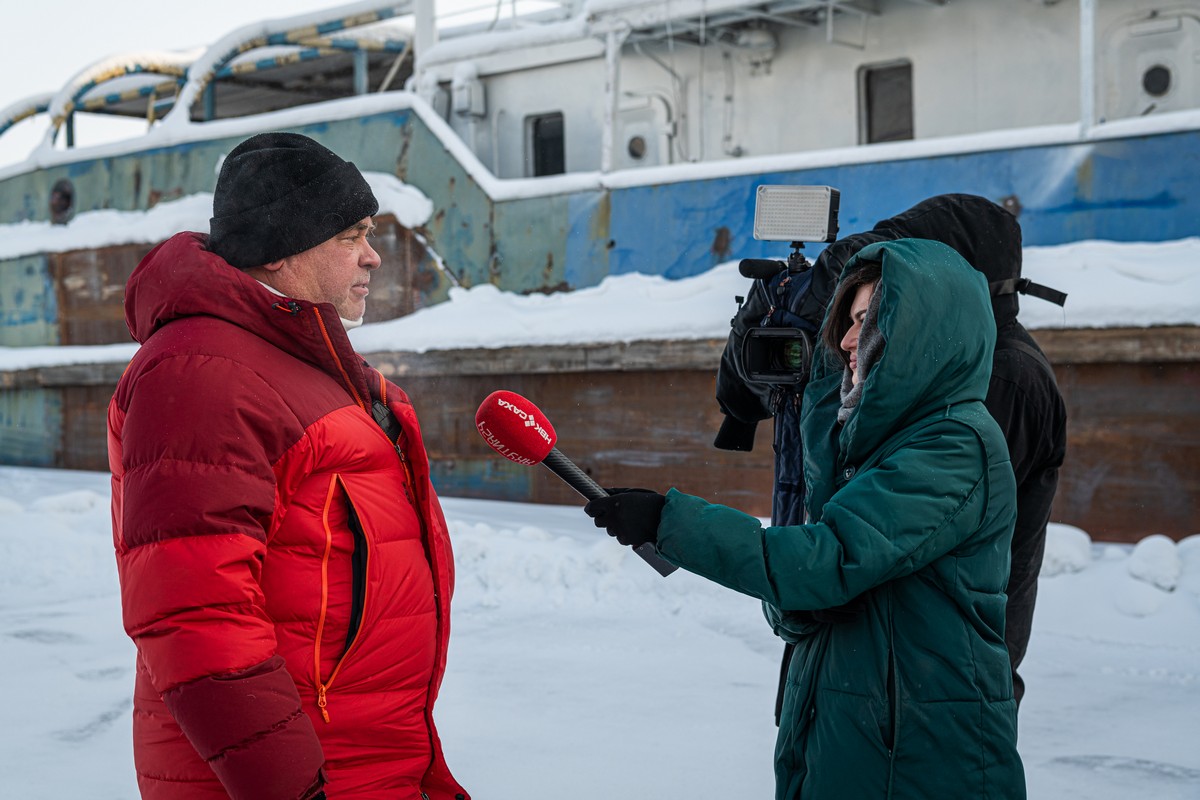 And that was about it for the day’s unique tourism!