It wasn’t all sad down in Turkey. It was also amazing. Plenty…

First amazement: it turns out that in Turkey there are around 150 ancient theaters! Some well-preserved; others – less so. I really didn’t know just how keen the locals here were millennia ago when it came to theater-going. Well now I do… 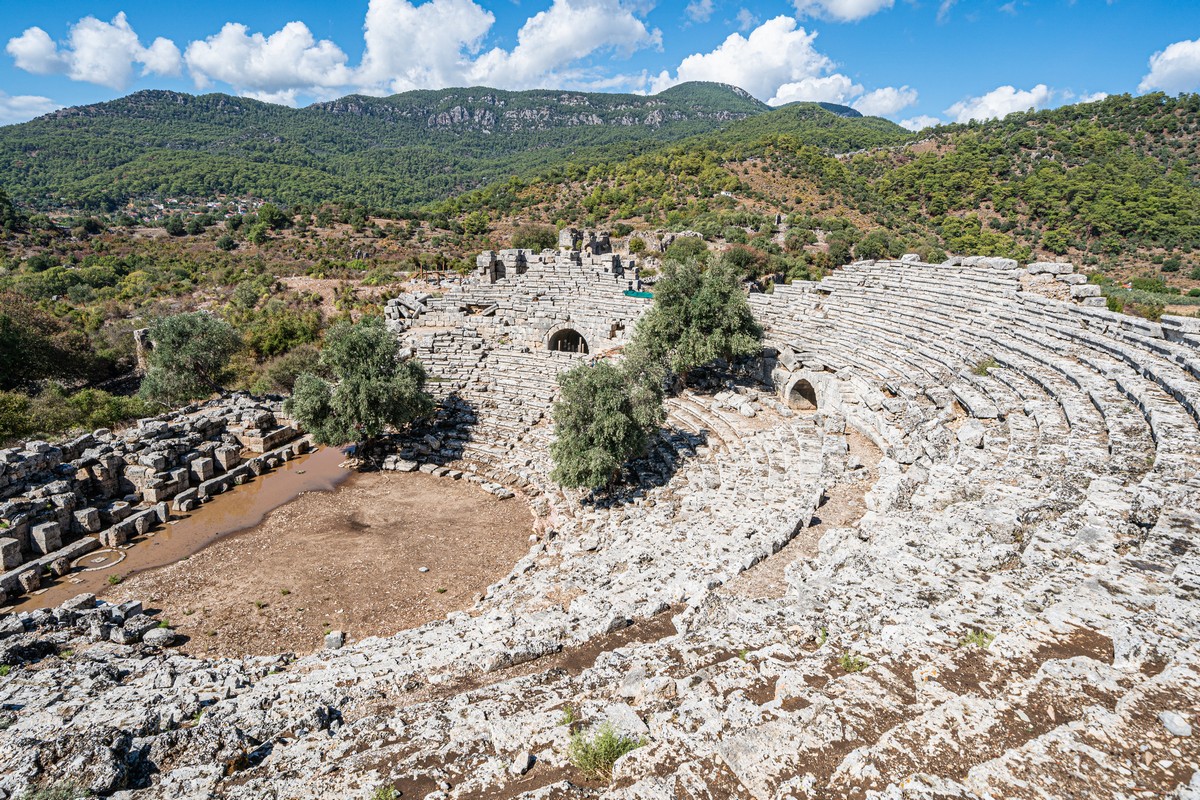 Second amazement: I’d always thought (like you maybe?) that such ancient stone open-air… constructions were called ‘amphitheaters’. Wrong! As our guide told us, the prefix ‘amphi’ comes from the ancient Greek for ‘around, or just ’round’, or – ‘on both sides’. That is, an amphitheater has the stage (or show area, say, for gladiator fights and the like) in the center, surrounded on all sides by spectators on their stone rows of seats. So, for example, the round oval Colosseum in Rome is an amphitheater. While, this, here, for example, is simply a ‘theater’ – no ‘amphi’; specifically, the one in Kaunos -> 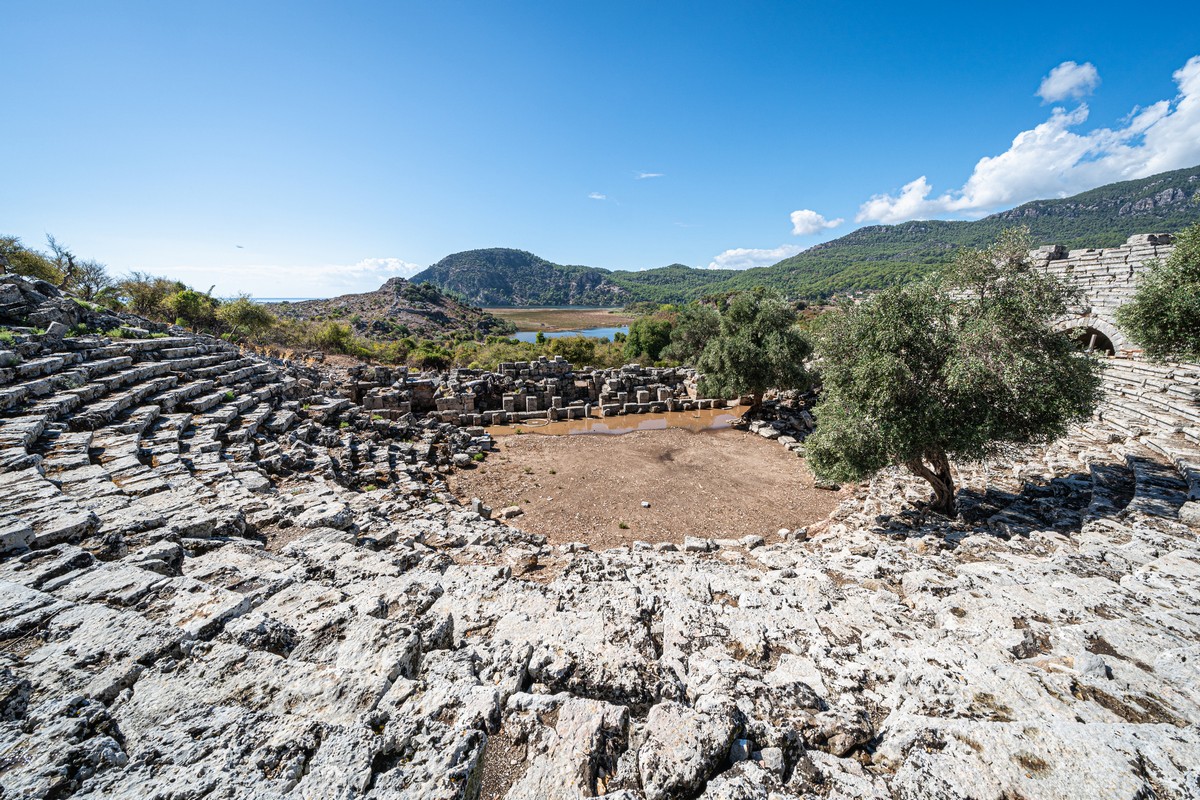 How old do you think this theater is? A thousand years old? Two thousand? Actually more like two-and-a-half thousand, with its construction having begun around 600-400 years BC.

We were lucky: first, October is hardly peak season; second, what with ongoing (groan) corona-related restrictions, there were even less folks around than usual. We were almost the only ones here. Hurray! For no crowds = better photos. 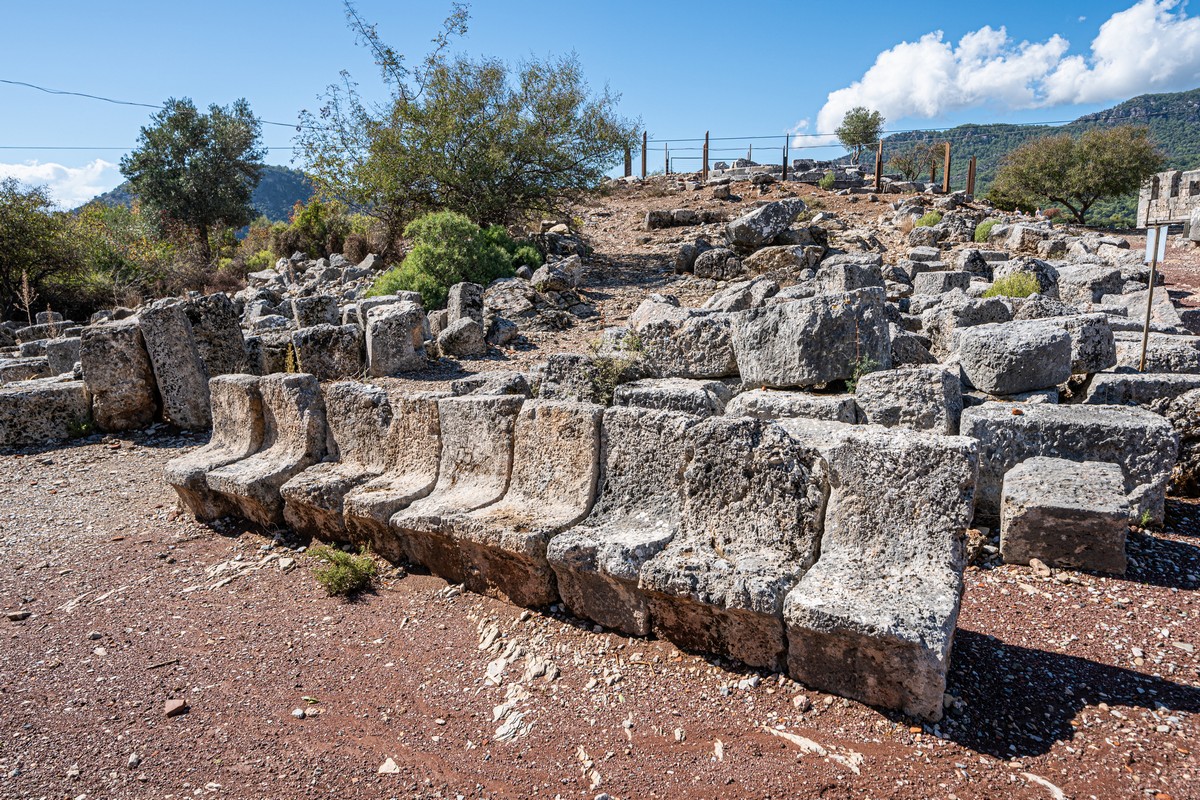 Btw: our guide told us how corona and its lockdowns have been fairly devastating on the country’s tourism business – so important to Turkey’s economy, especially employment. He also told us how the government had provided no assistance to small businesses whatsoever, so many tourist agencies simply folded. Among his tour-operator acquaintances there had even been some suicides.

There I go again switching from major to minor. Let me return to the more… life-affirming.

…Like this, for example: next to the ancient theater – a similarly ancient acropolis, or, rather, the ruined remains thereof. And being an acropolis – which means ‘the highest’ in ancient Greek, since an acropolis’s main feature is it’s always built upon elevated ground – the views all around: spectacular -> 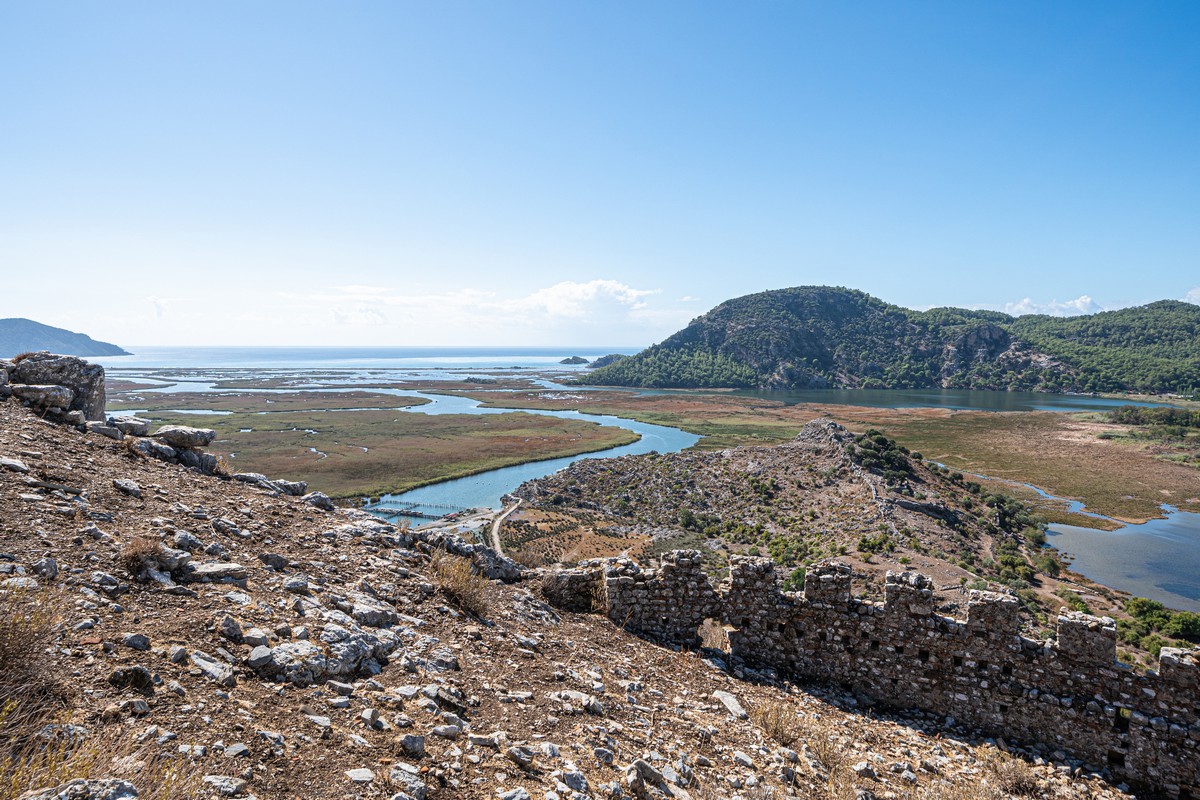 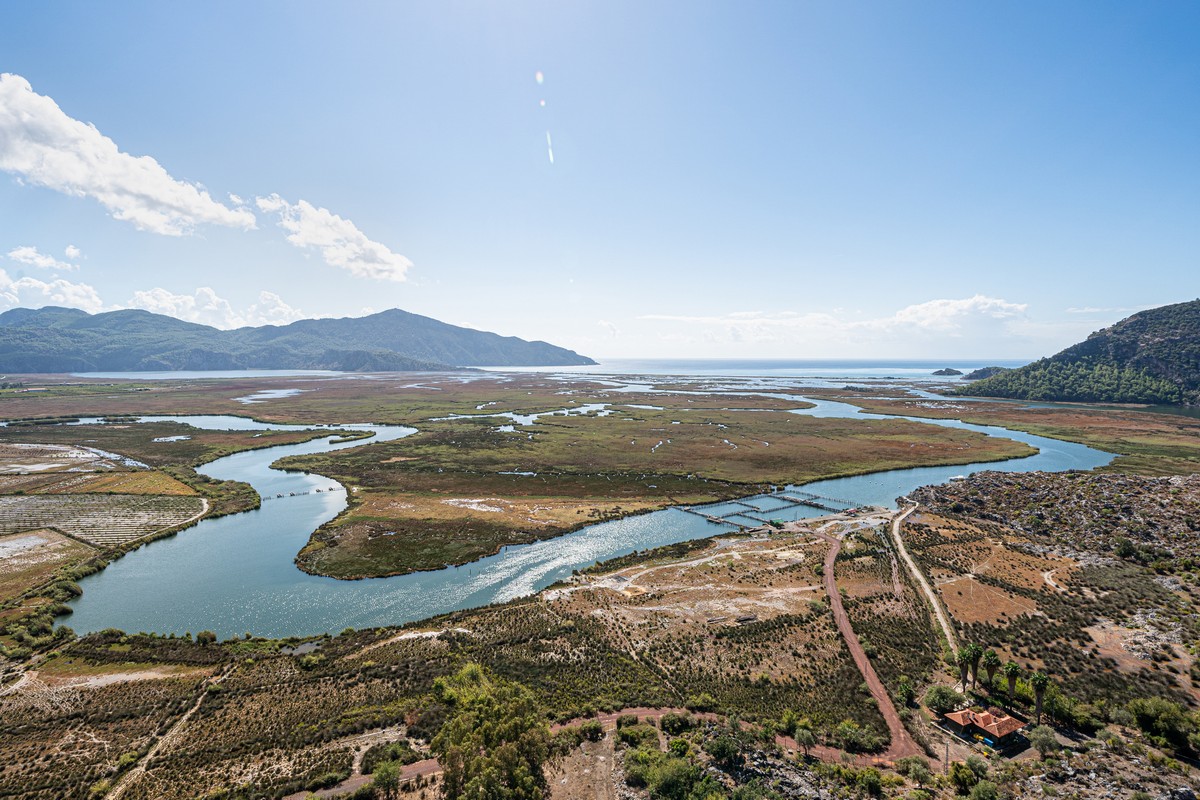 Our guide told us how this here marshland around the delta was for centuries the perfect breeding ground for nasty malaria-filled mosquitos… and they only managed to banish the malaria problem in the 1960-70s! Here’s another interesting fact (our guide was full of them:) – where the river meets the sea here is the geographical boundary between the Mediterranean and Aegean seas. 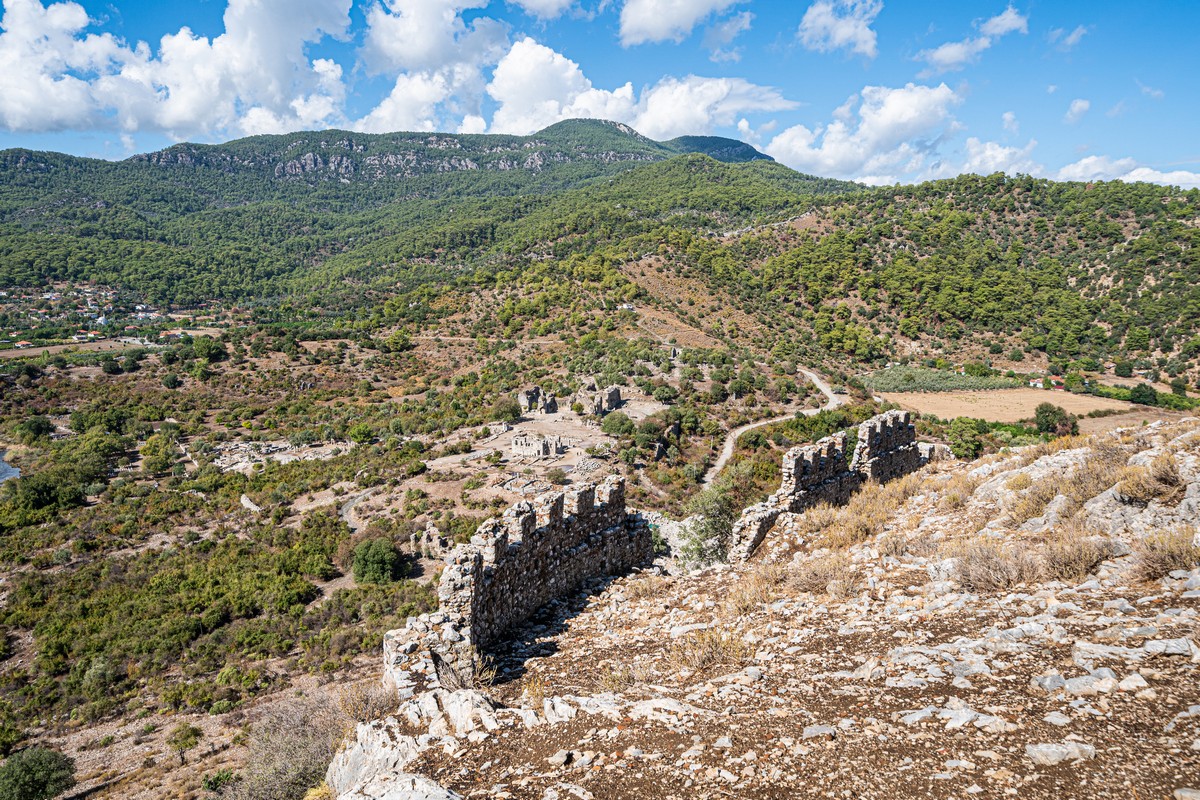 Like I say: few tourists. But they’re made up for in… goats! 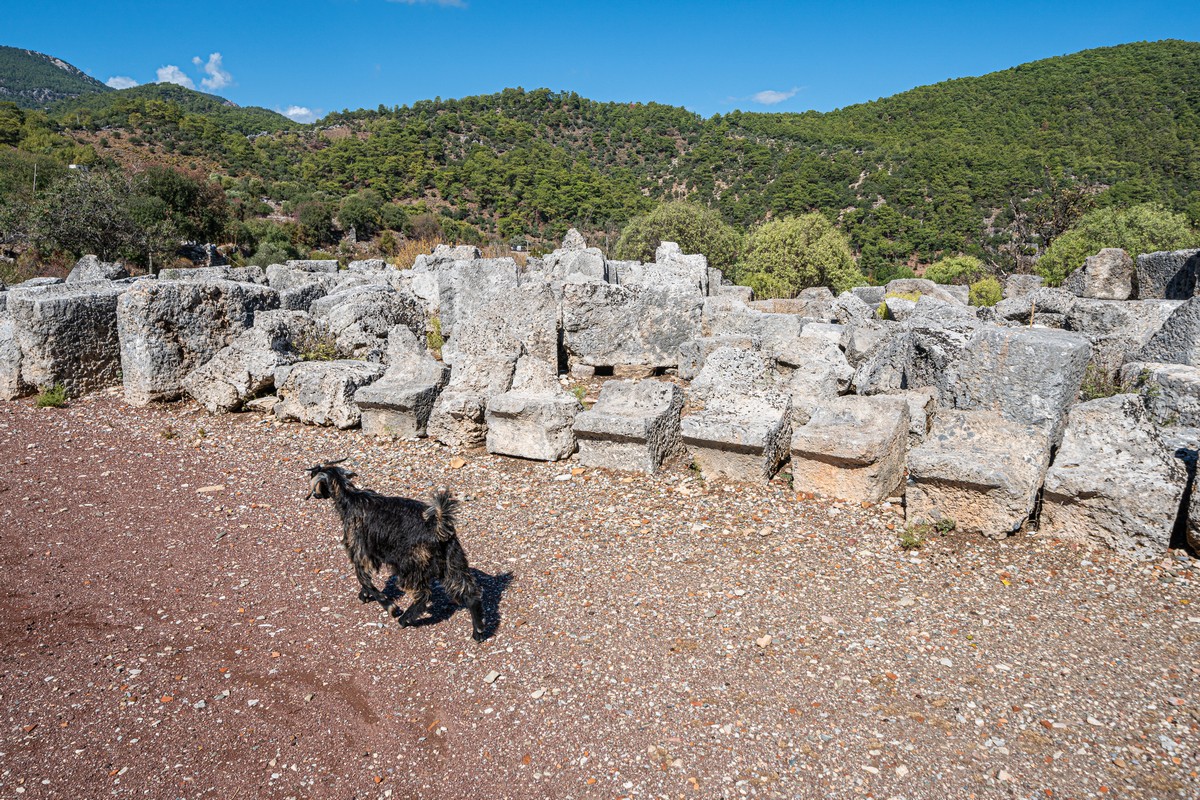 A kilometer-and-a-half from the acropolis is… a necropolis – a city of the dead. The tomb of ancient emperors, from around 2500 years ago: actually cut into the rock of a vertical mountainside! ->

From left to right you see the evolution of these ancient catacombs – from simple caves, to more and more ornate installations. The last is the largest – but was never completed -> 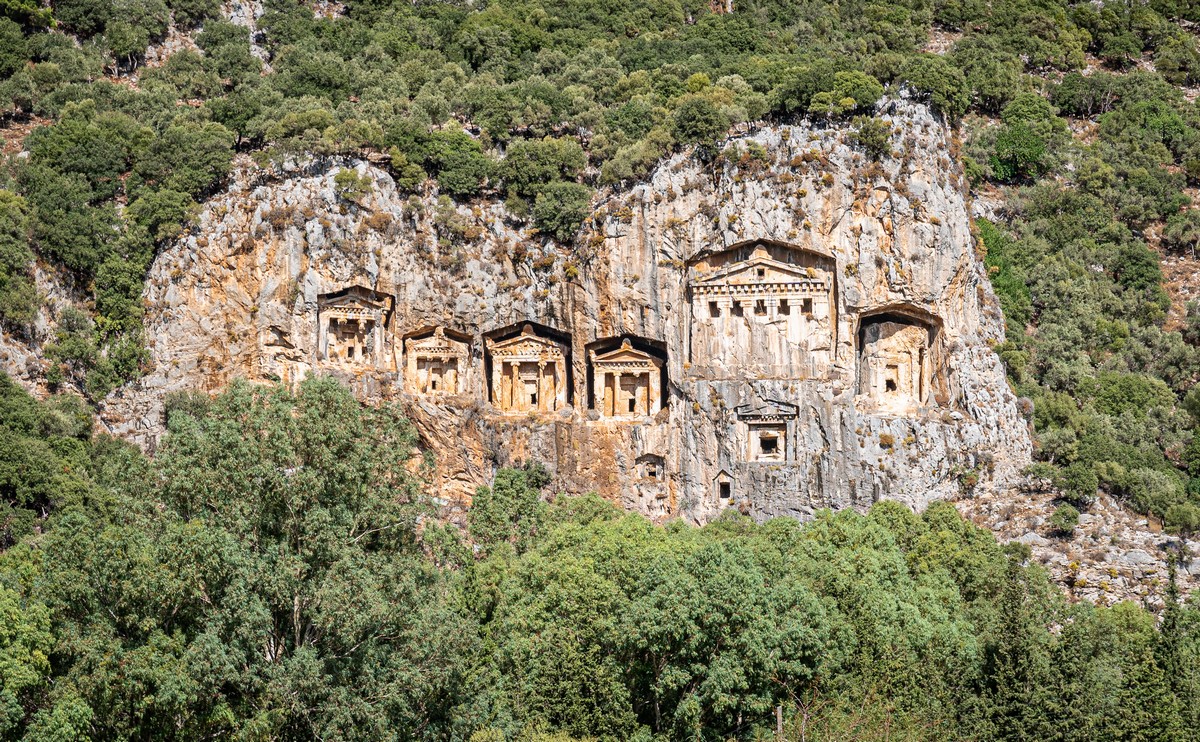 Assorted pics of the ancient city:

Apparently this is what’s left of one of the very earliest Christian tombs – from the ninth century. Given that Christianity became the official religion of the Roman Empire around that time – it looks to be true.

Here’s another temple. It started out pagan – only to become Christian later on. And you can see the gradual evolution of construction and reconstruction upon the original foundations ->

This here is a collection box. Visitors to the city were obliged to make a donation in that there square hole ->

Here’s the acropolis from the side. Impressive. It reminds me of the Masada fortress in Israel. Curiously, a shocking tale of mass-suicide features among the historical stories of the acropolis too: 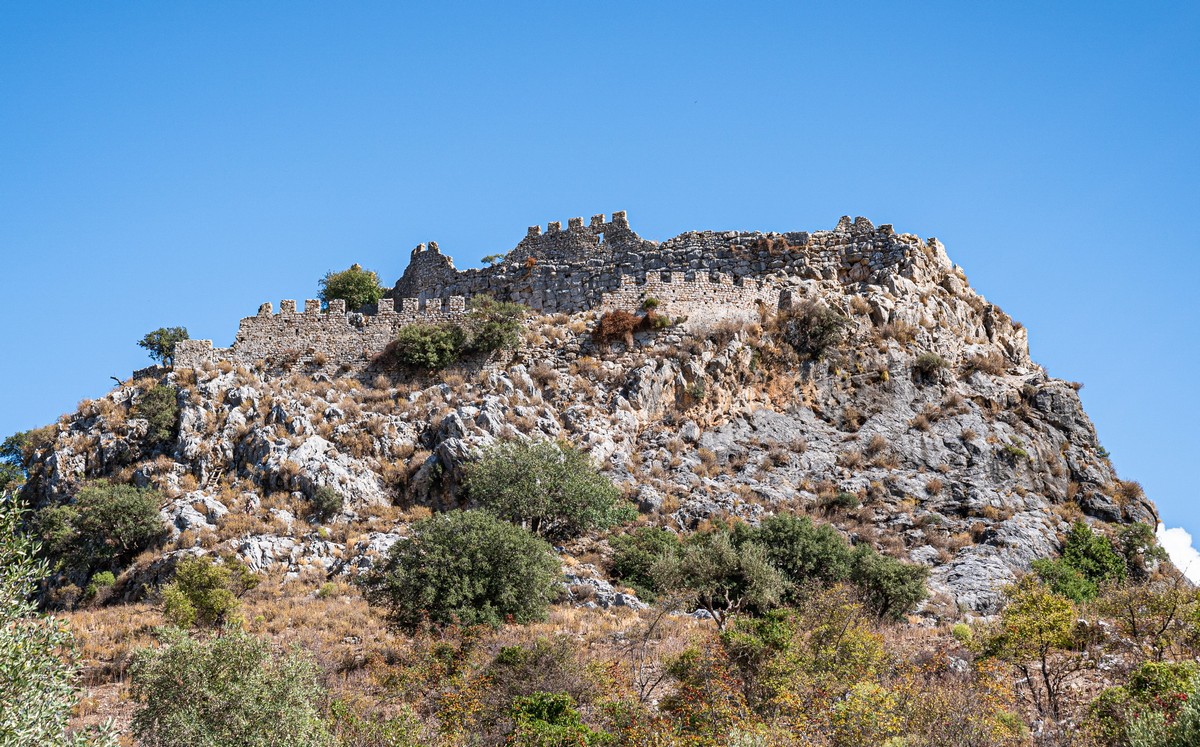 Many of the historical objects here are being renovated. And there are two juxtaposed views on such undertakings…

The first: stop with all the restoration already! Let the tourists work out for themselves how things were originally!

The second: who wants to look at ruins? Let’s restore the historical objects to make them resemble as closely as possible how they used to look, in their prime.

So where do I stand? Actually, I veer towards the second view. Perhaps that’s why I really enjoyed our visit to Bodrum Castle – all nicely renovated:

The crusaders built the castle in just under a century, and knights from many different countries would stay here; therefore (as our guide told us), there are more than a hundred heraldic coats of arms to be seen here, many of which have clearly been renovated, or replaced even: 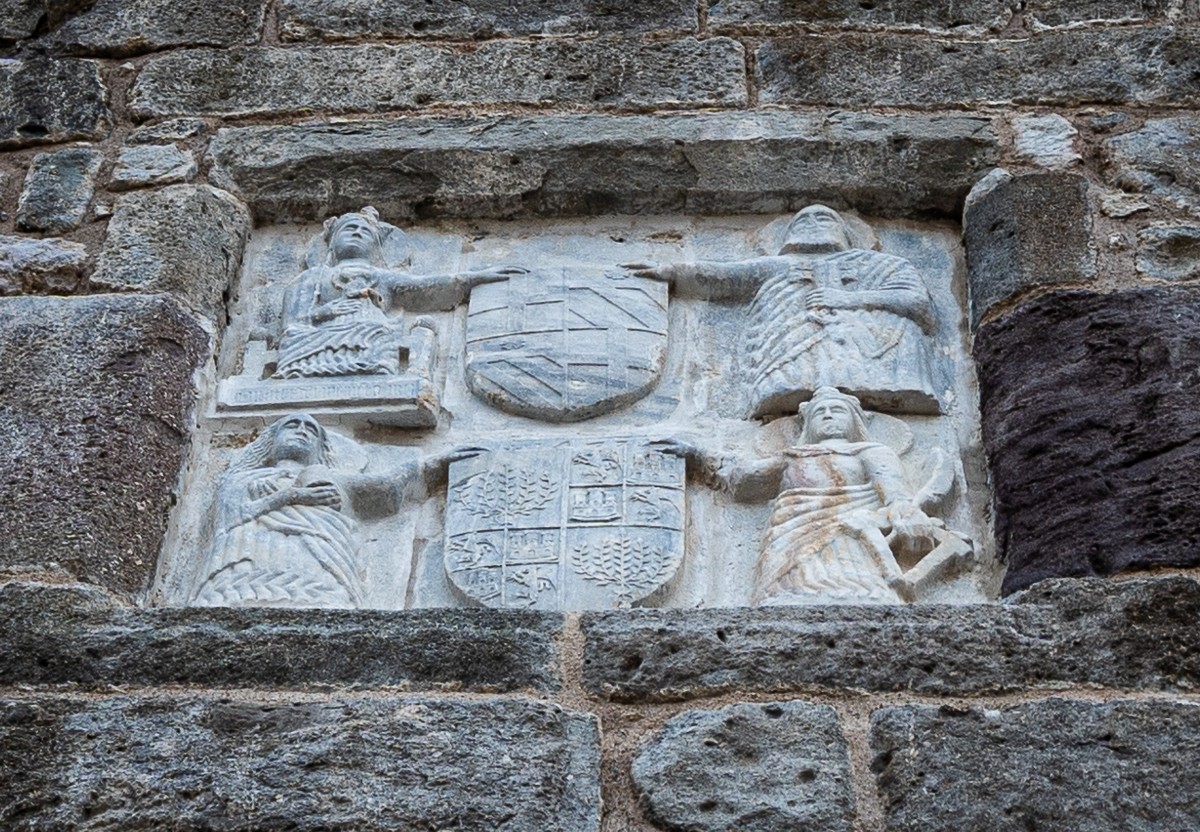 I wasn’t too impressed by the fact that materials from the ruins of none other than the Mausoleum at Halicarnassus (one of the Seven Wonders of the Ancient World, dammit!) were used in its construction (incidentally, the Mausoleum at Halicarnassus is the tomb of Mausolus – from where comes the word mausoleum!). But still – what’s done is done, and done eons ago – so let’s just accept it, eh? )

Here’s an interesting one – the original Christian chapel – converted into a Muslim mosque (with its distnctive minaret)! -> 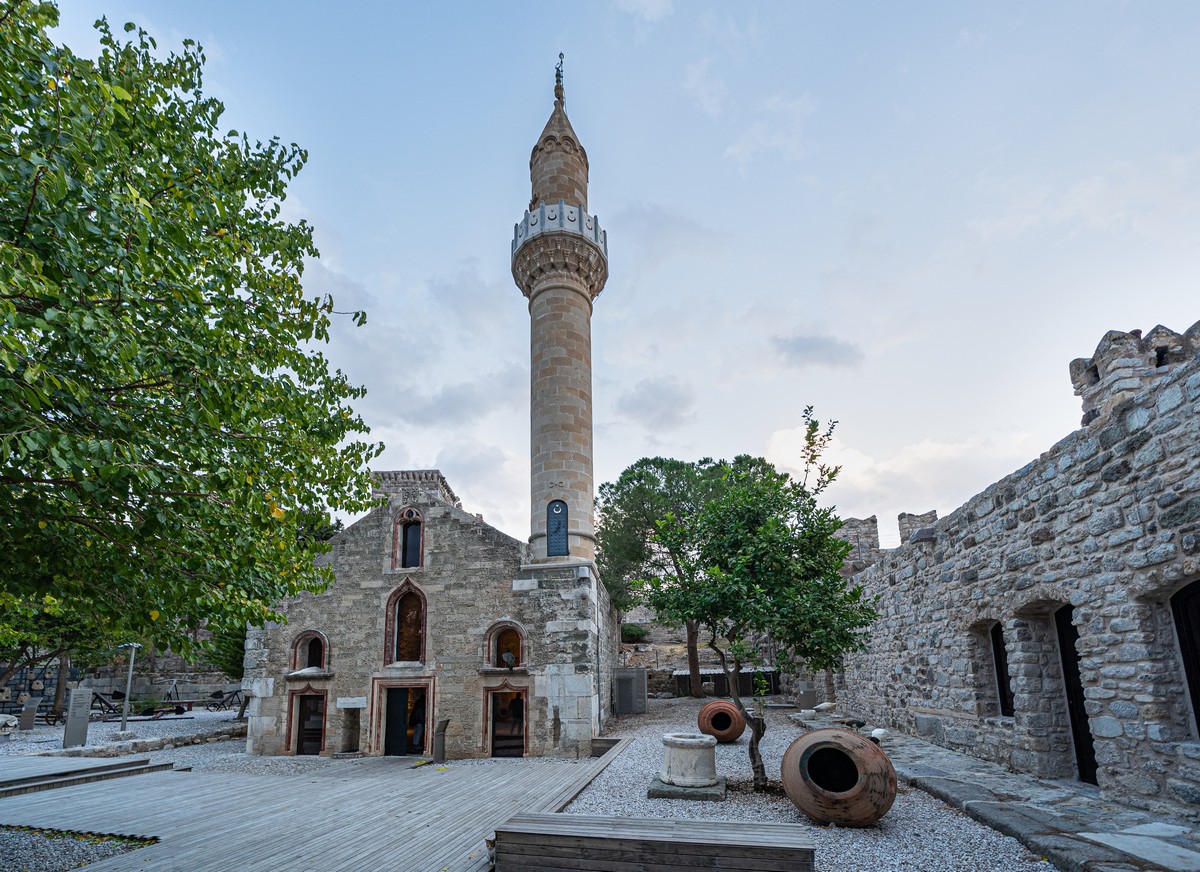 Remains of ancient columns and sculptures:

Probably the most interesting exhibit: the Uluburun shipwreck and its priceless cargo, found by chance by a diver in the late 20th century! -> 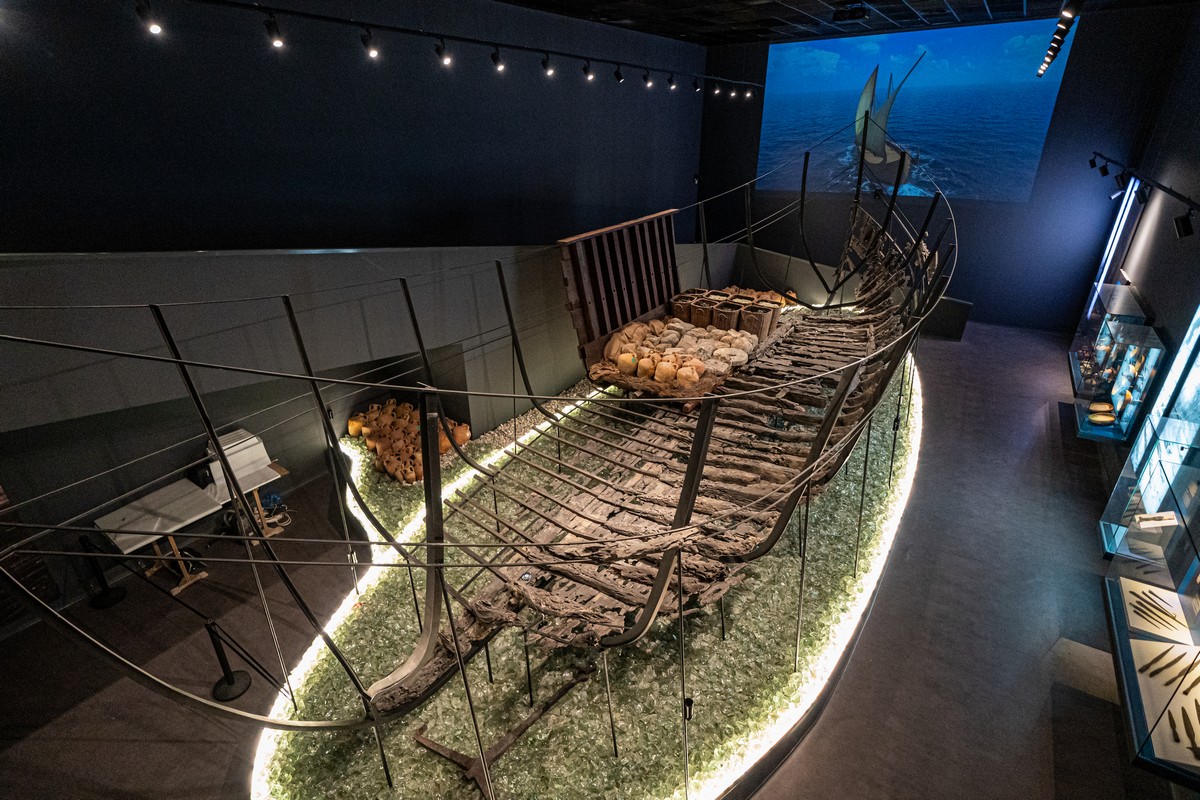 The cargo included several tons of copper and tin ingots, and a great many Canaanite crockery items and jars, but only a few weapons: a couple of swords (which could have been cargo too). Does this mean commerce and international logistics back then (3000+ years ago) were safe undertakings? No piracy or other kinds of attacks on ships? Just bad weather to be concerned about? I don’t get it. Or maybe they didn’t excavate everything? 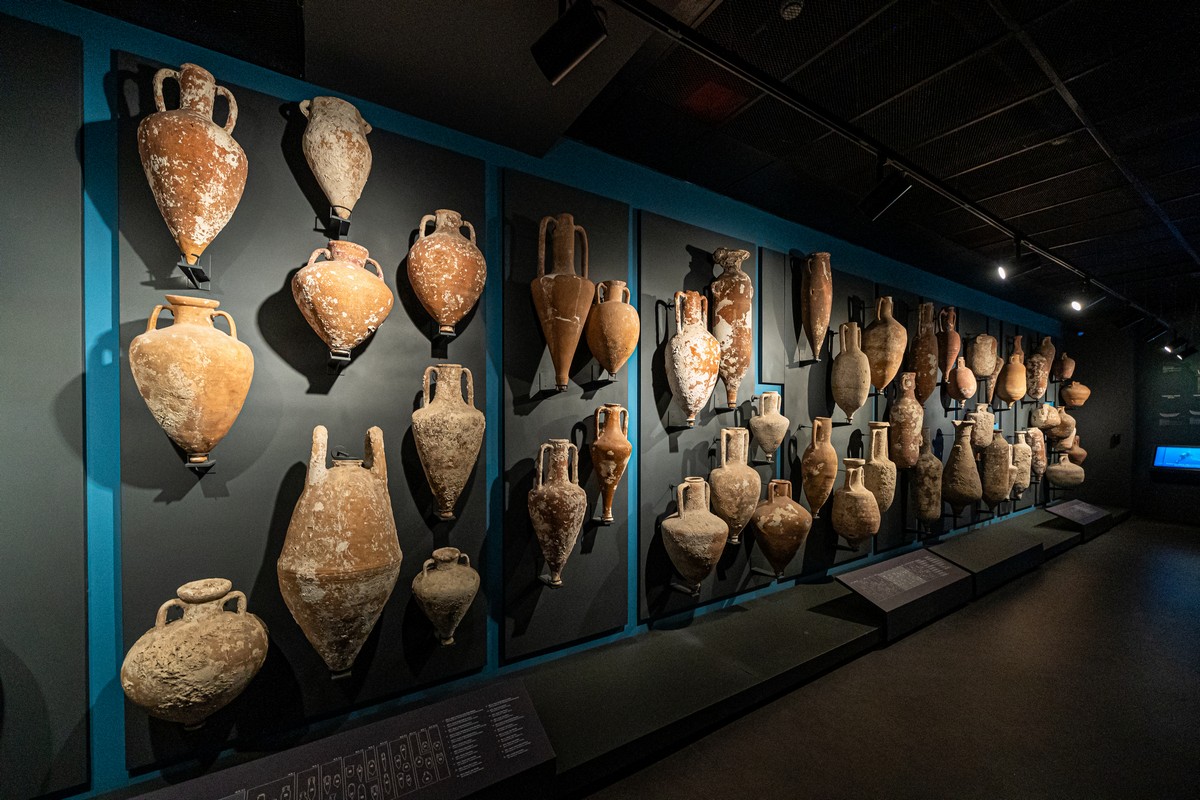 In closing, a few more photos to keep things positive…

That’s all from Turkey folks. All the pics from the trip are here.