May 31. Mean much to you? It didn’t to me – as I never ‘needed’ outside help with… quitting smoking! But I’ll get to that in a bit… However, I did look up a ‘no smoking day’ or some such just recently – to see if it coincided with my sudden urge to tell you about my own method for how to quit smoking (which works by the way – at least, it did for me). And it does coincide – almost: World No Tobacco Day is coming up in a couple of weeks – on May 31. So, in the timely spirit of a general anti-smoking drive this sunny month of May, herewith, I give you, ladies and gents, boys and girls, ‘How to Quit Smoking – the Kaspersky Red-Button Method’!

I’m somewhat ashamed to admit this, but I was a heavy smoker for something like 35 years! I knew early on it wasn’t a healthy habit, and that I really should quit, but somehow I never got round to it: there was always something more urgent to be stressing about! I just wasn’t ready for the serious preparation needed – both psychological and moral. 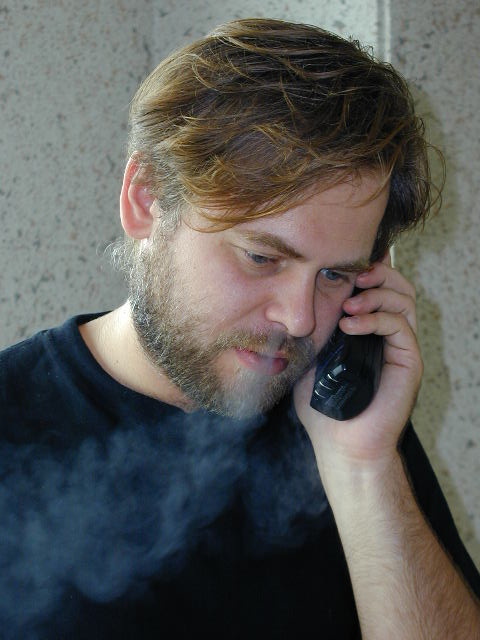 Yep, the whole ‘getting psyched’ for the big event kept putting me off the idea of quitting. Even a book entitled something like ‘The Easy Way to Quit Smoking’ didn’t work: flicking through it one day I came to a page by chance, which gave calculations of how much money I’d save if I quit. Nope, not for me: book quickly closed, and it’s been on the bookshelf since.

I did it differently. And here’s how…

First off I started by asking myself: ‘what do I get out of smoking?’ And the answer? ‘Absolutely nothing!’ It’s harmful, unpleasant, and of no use at all. And it doesn’t bring in any money!

There were three things I really didn’t like about my smoking:

The cough and gurgle-throat I guess is bearable during the day, but at night when it starts keeping you from a sound night’s sleep? No way Jose. The bits of tobacco – also tolerable at first, but when shirts start to be stained tobacco-brown color? Nyet! But No. 3 was worst of all: the smell that clings to you – on both your breath and clothes. It got so bad I wouldn’t have a cigarette for an hour or two before important negotiations.

Curiously, when they banned smoking on airplanes, that helped. Ok – not massively, as they banned smoking… oh, when was it – the 1990s?! But it did show me one thing: that I could go without a ciggie for several – sometimes a dozen! – hours and there were none of the withdrawal or other symptoms that are often talked about. ‘Physical dependency’? A myth! Of course, once I landed, the nearest ashtray would be sought with the utmost urgency; but doesn’t that just show how it’s all in the head?! I decided: yes. So I extended the ‘smoking forbidden on planes’ rule to also cover driving in my car: it soon became a non-smoking zone too. Thus, steadily but surely, I was headed in the direction of quitting; but I wasn’t there yet…

My full-on quitting plan, which became ‘my method’, started like this:

For several months I had in my head an imaginary ‘big red button’. I kept going over in my mind how smoking is unpleasant, repulsive, and shows that you simply have no willpower. Meanwhile, the big red button would appear in my mind and gradually get bigger and bigger. Then I chose a specific date – my birthday, four years ago. And I decided that that day would be the day I smoke my last cigarette. And that day came and it was indeed the day I smoked my last cigarette. I pressed the red button in my head, and the next day I woke up a non-smoker. And that’s it! Try it yourself!

Ok, here are my ‘instructions’ based on the above:

First: you need to clarify what you don’t like the most about smoking. Second: you need to implant a big red button inside your head, which reminds you over and over you that smoking is a total waste of time and damages your health. I needed several months for this stage; some may need just a week. Third: you choose an appropriate/significant date which will be the last day you smoke in your life.

Finally the day comes, and not long before bed you smoke your last cigarette, then press the big red button! And that’s it – you’ll be a free man or woman!

Just be careful: you need to quit tobacco, not just cigarettes! When I tried to quit earlier, I didn’t realize this; I’d be like: ‘I don’t smoke cigs any more, but I can have the odd cigar!’ So every month or so I’d have a cigar. But that soon became twice a month, then once a week, then once a day. Then I thought: ‘cigarettes can’t be as bad for you as cigars’, and started smoking ciggies again! So if you do decide to quit, there mustn’t be any exceptions – whatsoever! No tobacco – at all!

So there you have it folks – my method, which works – as proved by my own quitting.

So if you do still smoke and want to quit, maybe you’ll be able to do so now before May 31? No pressure!…)