Phew. Thank goodness it’s over. The ghastliest year known to most of us ever – finally done, dusted, finito, fertig. Let’s just hope, as many folks are repeating: ‘2021 will be better; it can’t be worse, surely?!’

For a good 10 months of last year practically the whole world was in a permanent state of shock. And I don’t just mean the world’s population; private business and national economies were also hit incredibly hard. Alas, one field that hasn’t been affected badly at all – in fact it has only benefitted from the pandemic, greatly – is cybercrime. Folks locked down and working from home and spending much more time online meant there were many more potential cybercrime victims ripe for the hacking. And not just individual users, but also companies: with employees working from home, many corporate networks came under attack as they weren’t sufficiently protected since, in the rush to get everyone working remotely quickly in the spring, security wasn’t given priority. In short, the whole world’s digital status quo was also badly shaken up by this vicious virus from hell.

As a result of the rise in cybercrime – in particular that targeting vulnerable corporate networks – the cybersecurity sector has been busier than ever. Yes – that includes us! 2020 for us as a Kompany turned out to be most productive. For example, the number of new versions of our solutions launched throughout the year was most impressive – especially in the enterprise sector.

If you’re a regular reader of our blogs, you may recall something about this tech of ours. Maybe not. Anyway – here’s a refresher/into, just in case…

Our MLAD is a system that uses machine learning to analyze telemetry data from industrial installations to pinpoint anomalies, attacks or breakdowns.

Let’s say you have a factory with thousands of sensors installed throughout – some measuring pressure, some temperature, others – whatever else. Each sensor generates a constant flow of information. An employee keeping track of all those flows is fairly impossible, but for machine learning – it’s a walk in the park. Having preliminarily trained up a neuro network, MLAD can, based on direct or indirect correlations, detect that something’s wrong in a certain section of the factory. In doing so, million or multimillion-dollar damages caused by potential incidents not nipped in the bud can be avoided.

Ok – that’s the overall idea of what MLAD does. Let me now try and relate the granular scale of the analysis MLAD accomplishes using a medical metaphor…

Some of you will have a fitness bracelet. This tells you your pulse rate and number of steps taken, but not a great deal else. There are just a few sensors in the device and that’s that. Let’s say that doctors have a more advanced device with a lot more sensors to be able to monitor other things – like blood pressure, white blood cell count and so on. But let’s take hypothetical monitoring of whatever a step further: let’s say doctors have a device with, like, a zillion connected sensors all over the body – in fact, in every blood vessel, every nerve cell, and practically everywhere else, all transmitting telemetric data constantly. Of course, such a massive quantity of granular-scale data is sure to help doctors pinpoint this or that which might not be quite right in a patient’s body and which requires treatment, but a doctor’s actually analyzing it – what a headache (also detected by sensors:). And with a woosh, a flapping of cape, and a squeaking of tight briefs over a pair of tights – in flies to the rescue of the overburdened doctor… not Superman, but our teKhnologies! 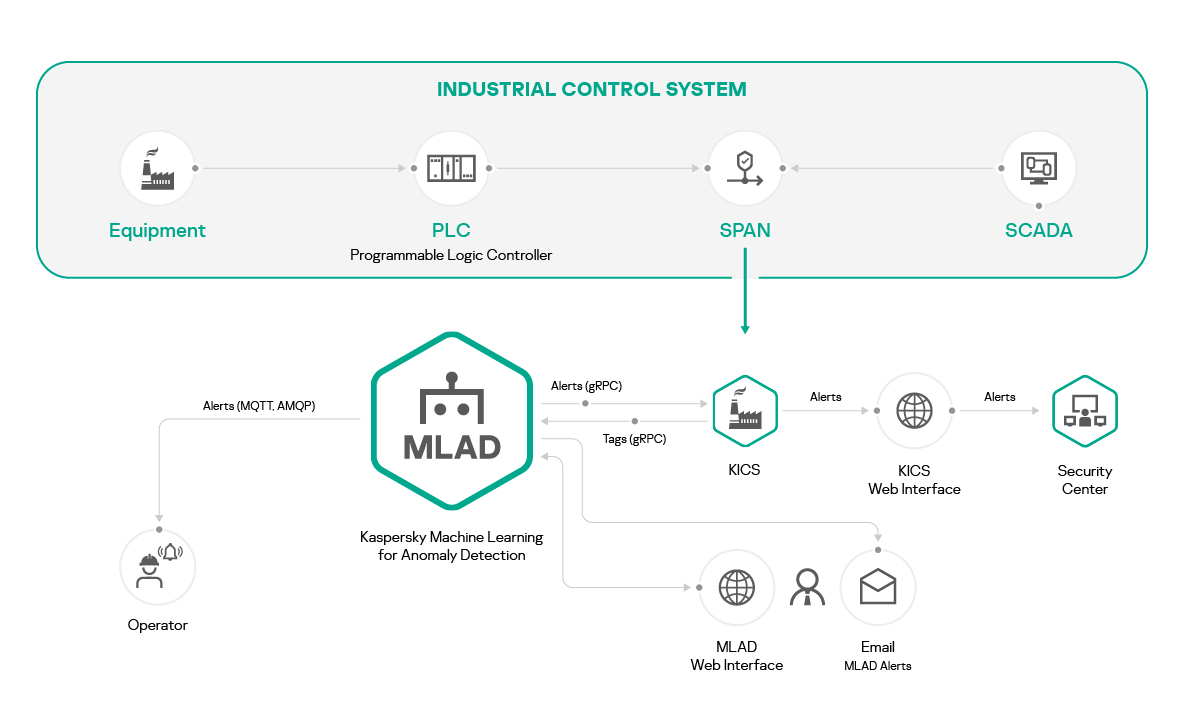 Ok, intro/recap of what MLAD does – done. Now about its new updates…

The first serious upgrade of MLAD is called Pipeline. Not to be confused with the third track on Construction Time Again, this is a feature that allows to split up analysis of telemetry into different parts.

Most folks have two arms, two legs, and a predetermined number of other organs. Knowing they’re all doing kinda ok on the whole – you’re not sick in some way or other – is good, of course. But knowing how each bodily organ is doing on its own would be much better. In practice this principle is applied in things like Building Information Management (BIM) projects: in every room there’s a window sensor, a thermometer, an indicator of the working regime of the air conditioner, and so on. Thus, instead of stuffing the whole building into a single model, we have a mini-model for each room. Simpler, more elegant, with the analysis more pinpointed and relevant.

The second big update is called Trainer.  No, not the latest offering from New Balanace, our Trainer allows the company using MLAD to retrain the algorithms as needed – without our participation. And such retraining is required rather regularly: raw materials change, a process is adjusted, a filter’s added, and so on. Back to medical metaphors… You change what you eat – no more junk food, only healthful options (or the other way round) – and your blood test results change too. Similarly, typical sensor readings can change after a process ajustment, so the neural network needs to be given a new norm, and it’s done now with one button.

There have also been some interface tweaks and improvements. For example, MLAD can now show an overview of data from one type of sensor for the whole object, and draw up a ‘map’ of the production scheme with pressure or temperature determined for the whole workflow. And in the future (teaser!), we’re planning on drawing up on-demand 3-D models of objects with all readings, in order to make localizing anomalies possible to the untrained eye.

One more fun fact for dessert: the technology is so cool that we’ve come up against an unexpected, unusual issue: at first client companies’ folks simply don’t believe that all the above-mentioned is possible! Only by the end of a practical demonstration of MLAD’s capabilities do they start to realize it isn’t us making it up and that it’s going to help them immensely in their work… and their eyes return to normal after an hour wider than saucers ).

So. Impressed? If so, and you want more info – go here. There you’ll find case studies, and a couple of slick demo-videos.

And that’s all for today folks. Stay safe!…