The other day I visited a most unusual, unique place – and just down the road too. It’s a space-travel training complex where they do simulations of long missions into space. You may have heard of a small group of volunteers who cut themselves off from the world for a long as it takes to fly to Mars and back? Well, this is the place where that happens… 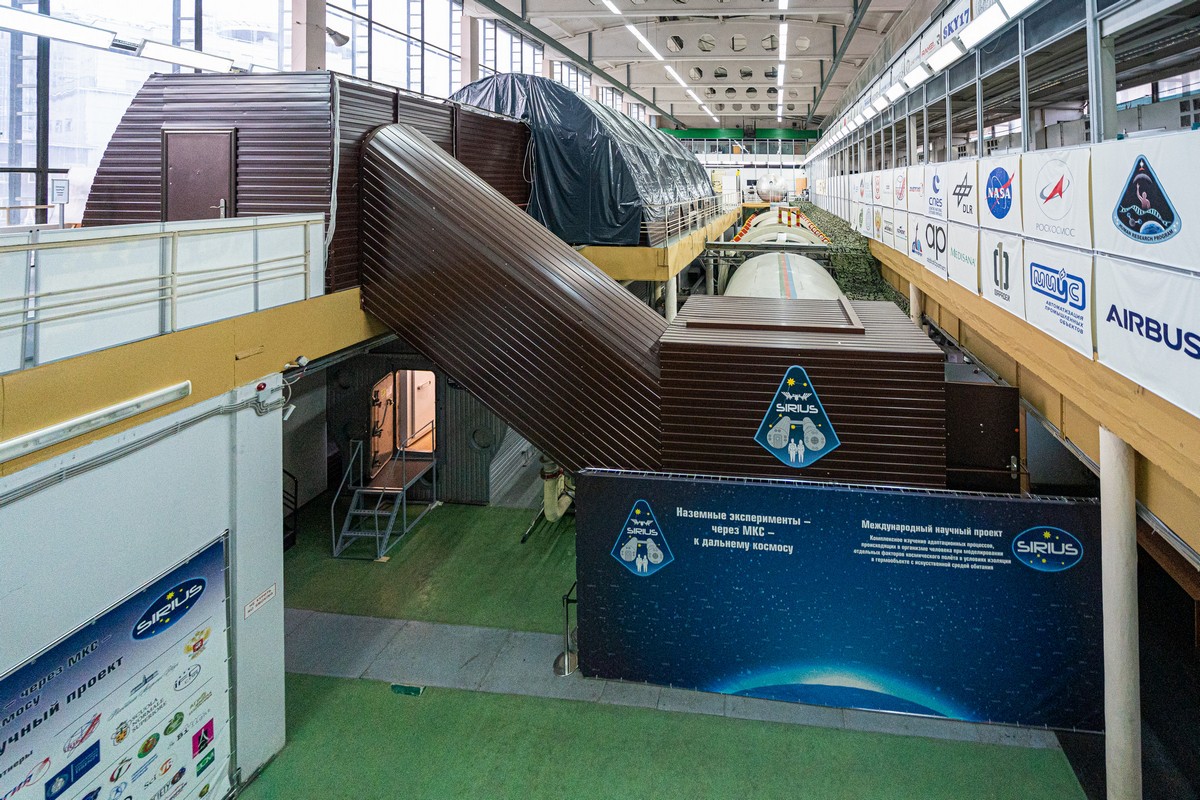 …In this unassuming building: 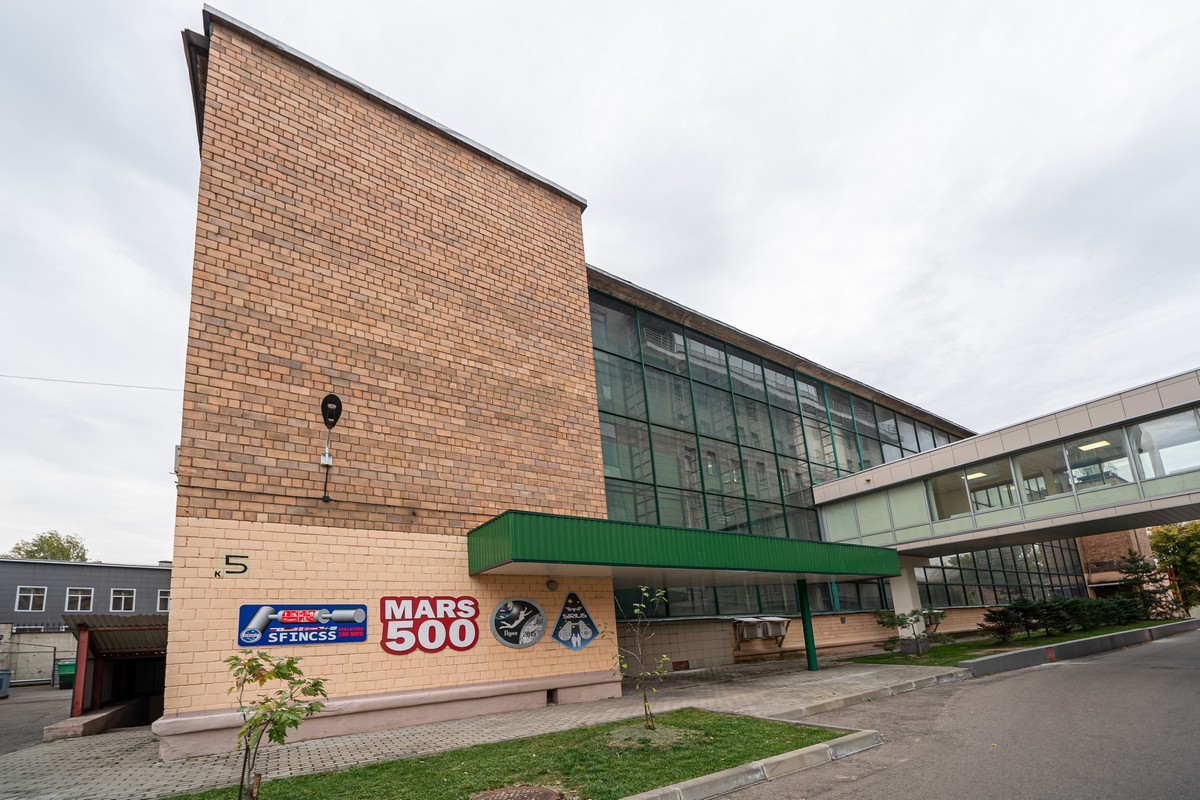 …Namely – inside cylindrical chambers like the one in the following pic, whose size is no larger than that of a modern-day space ship. Inside everything’s set up to imitate as closely as possible a space flight: limited space, regeneration of water and oxygen, time delays in communications ‘with Earth’, etc. The only thing that’s not reproduced is weightlessness; oh – and windows through which you can see stars ). 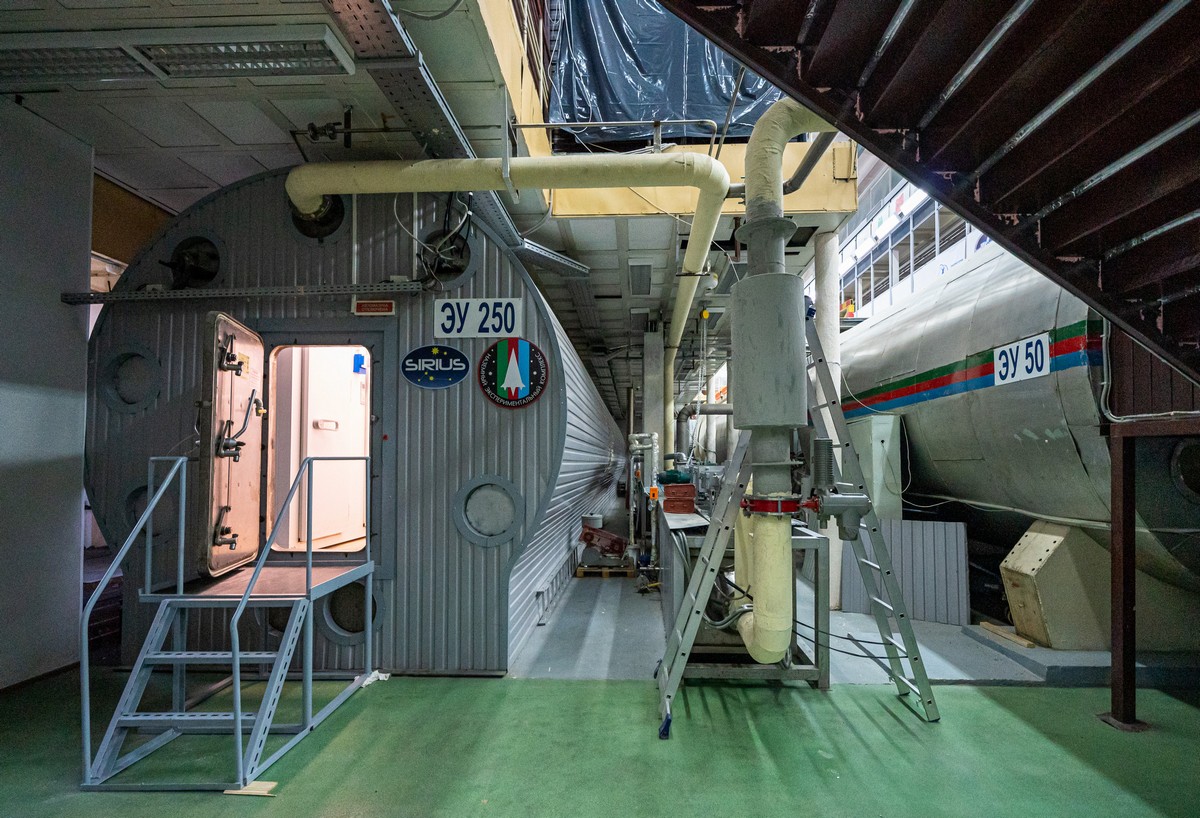 All righty. Let’s go have a look… 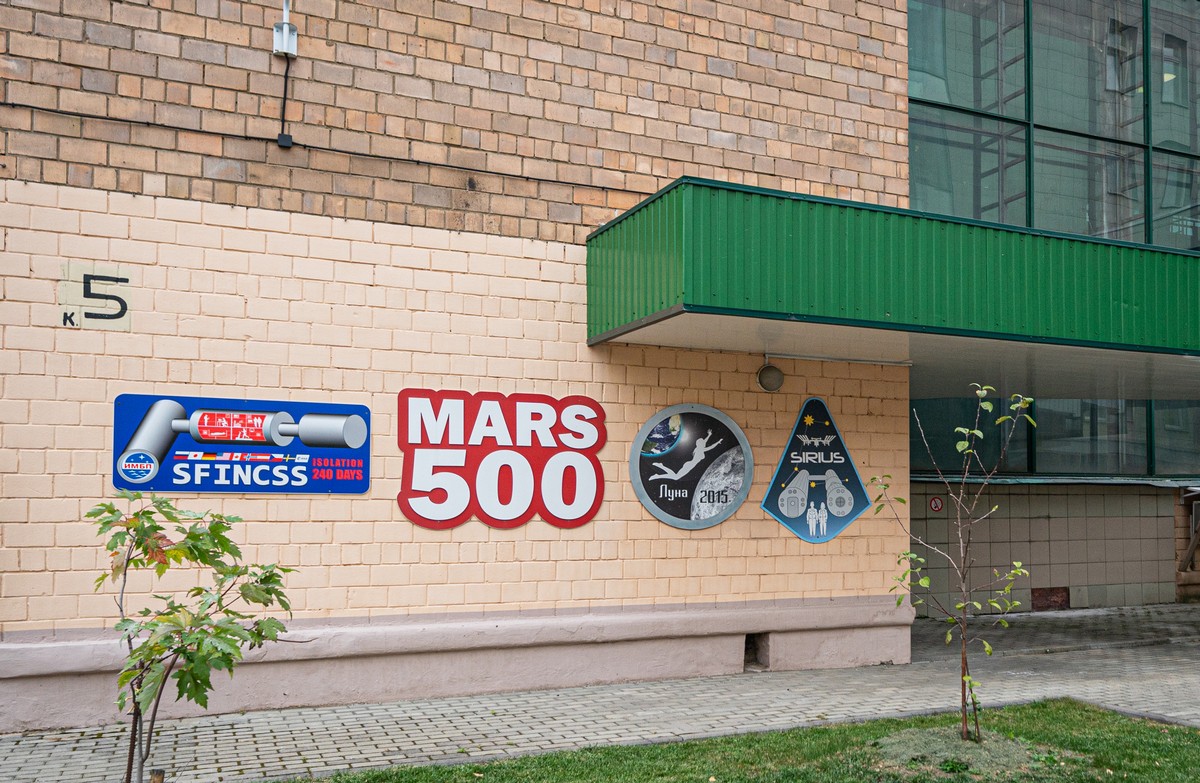 The complex is made up of several chambers joined together by coupling bridges: 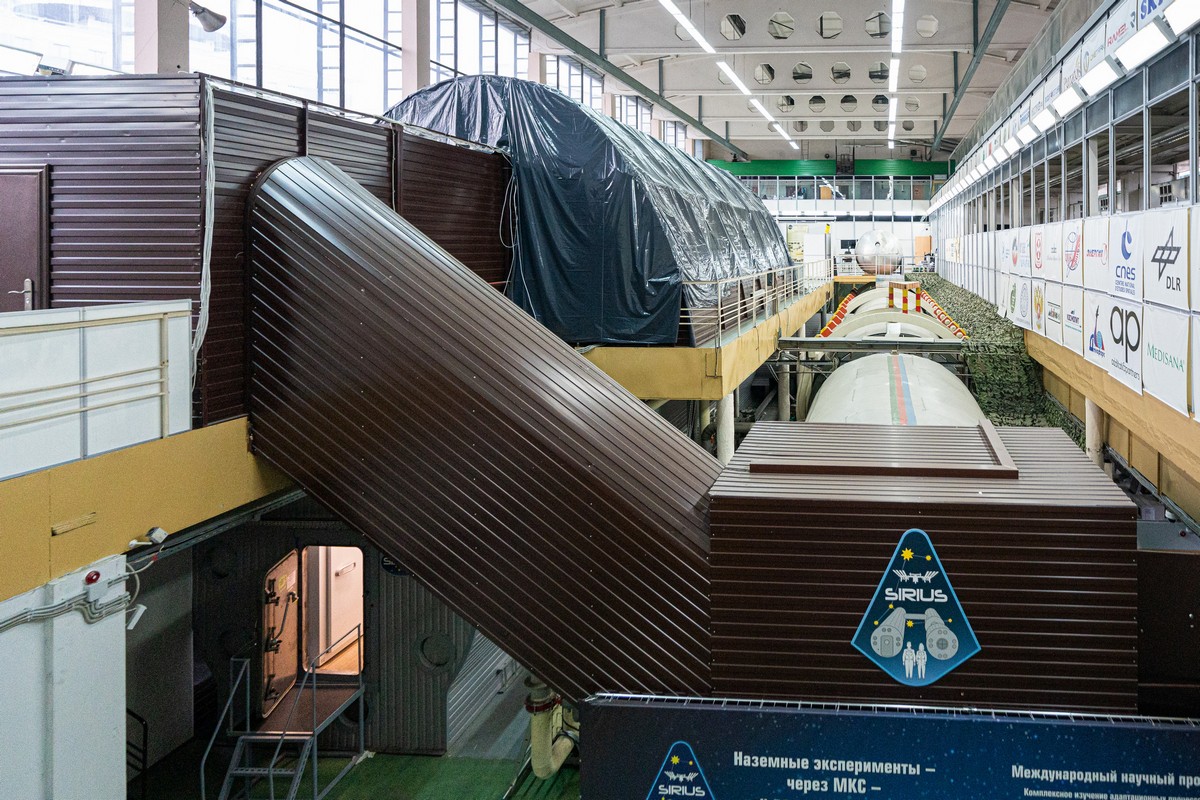 First we have a look at what’s outside the chambers. In principle, the chambers as a unit need to be fully autonomous, with no connection to the outside world at all. But actually all sorts of telemetry about everything living – and not living – inside is gathered via various sensors and cameras. Accordingly, on the outside there’s plenty of equipment quietly humming away: 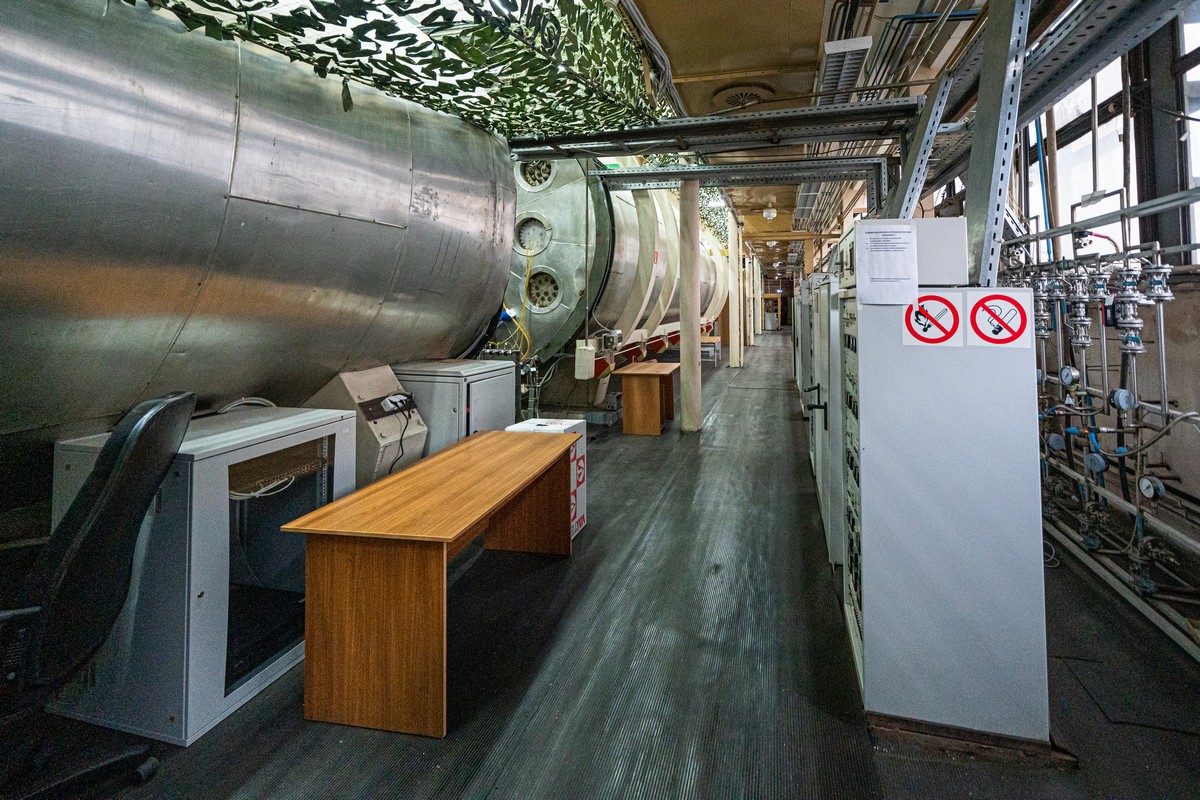 To get inside the Martian module you need to squeeze through this here hole! -> 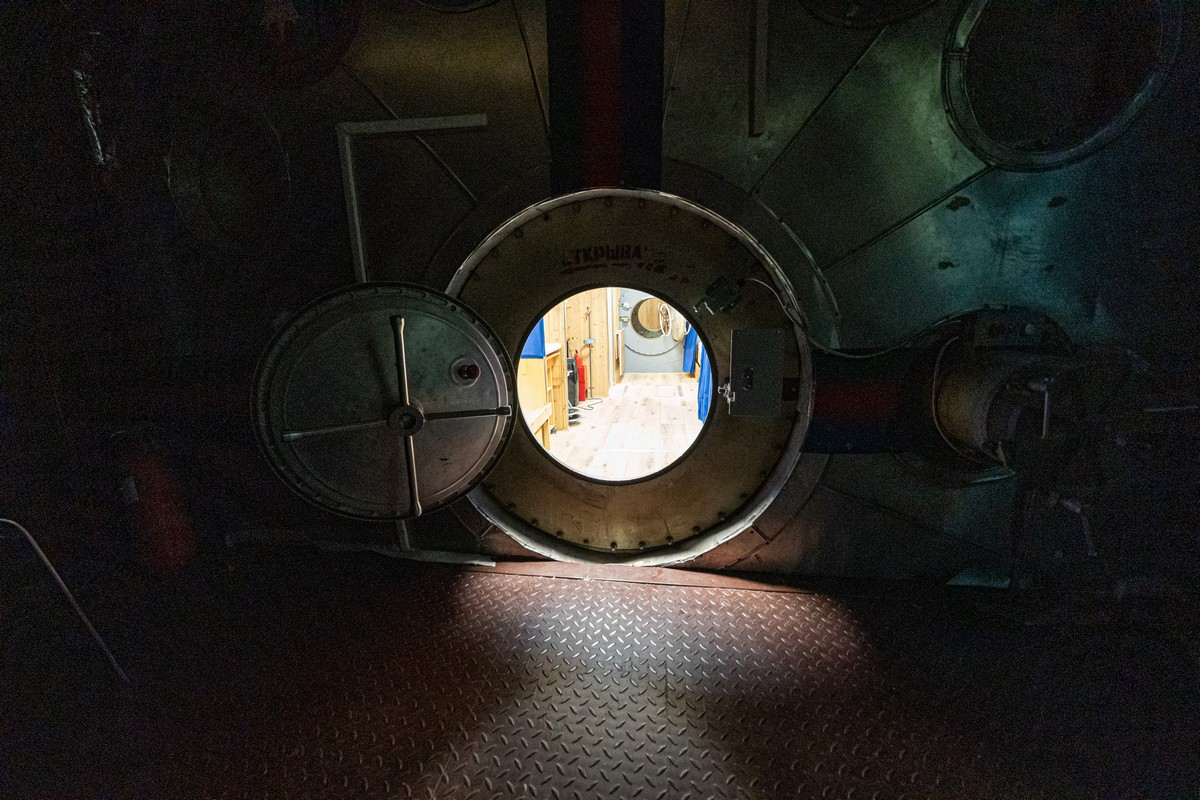 The complex is where the MARS-500 project took place – a simulated 520-day (!) crewed mission to Mars and back, including a landing on the red planet.

Now, if such an expedition were ever to take place for real there’d be all sorts of serious issues that’d need to be addressed beforehand, since a trip to Mars is a veeerrry long trip (64 million kilometers); it’s not the mere short hop up to the moon (385,000 kilometers). For example, there’d be the solar and cosmic radiation to deal with. On Earth we’re protected from it by Earth’s magnetic field. And by the way, astronauts on the ISS and space ships of various flags also fly within this protective magnetic dome. How a mission to Mars could ever be protected from radiation outside the magnetic field is still way out of the reach of Home sapiens’ progress in science; indeed: it’s something only a science-fiction writer could imagine at present. Me personally, I just find these here interconnected lead capsules not really much help: as long as we can’t solve the radiation problem there’ll be no one heading to Mars any time soon.

My companion with me on the visit to the space simulation complex was O.A. Here’s what he had to say about a similar project from ~60 years ago:

In terms of design, the MARS-500 project, is very similar to that used in the preparation for a trip to Mars by the Heavy Interplanetary Spacecraft (TMK) developed [by the Soviets] in the 1960s. In its final incarnation the TMK was a five-story cylinder: the ground floor was the living quarters, with individual cabins, a kitchen and a library – of microfilm! On the second – working – floor was situated the control cabin, also workshops and exercise machines. On the fourth floor was the stowage compartment. On the fifth: the reentry module – on the outside. The most interesting floor was the third – the ‘biological’ floor, on which the crew could grow their own cosmic crops (just like in the book The Martian – curiously, written nearly 50 years later:).

In 1967, three astronauts – German Manovtsev, Andrey Bozhko and Boris Ulybyshov – underwent an on-Earth simulation (much like as they did here) for a full year in preparation for their planned mission to Mars. Alas, the project never took off – pun unintended. Four separate N1 super heavy-lift launch vehicles (carrier rockets) failed to launch (with one of them falling back to its launch pad to cause one of the largest ever non-nuclear explosions in human history). In 1974 the program was suspended; 1976 – cancelled. PS: curiously, Elon Musk is planning on sending his manned space ship to Mars in 2024 – exactly 50 years since the Soviets gave up trying to do the same. Let’s hope he has better luck…

But back to present-day cosmic challenges…

Let’s say the radiation protection problem is eventually solved by technological progress (which I’m certain it will). But what about the other obstacles? For example, there’s the way that astronauts start losing their immunity after a month in orbit. Then there’s the way calcium starts leaching out of the body, and no matter how much milk and calcium tablets (and seeds:) you give an astronaut, it still keeps on leaching. And there’s still a way to go to solving these issues.

// Quick proviso: I’ve heard about these problems from professional sources at various times in different places, but I’m no astrophysicist, so sometimes the way I simplify things or the terms I use may not be fully scientifically accurate. If you do see something not quite right – please do let me know based on your superior knowledge and experience!

And here’s another problem – a big one: the social-interpersonal situation among the crew living closely together in a cramped space for a long time. Half-a-year to get there, half-a-year getting back, and almost nothing to do besides routine tasks over and over.

So what do they do? How do they deal with it? To provide the answers is what these here simulator-capsules at Mars-500 are for: 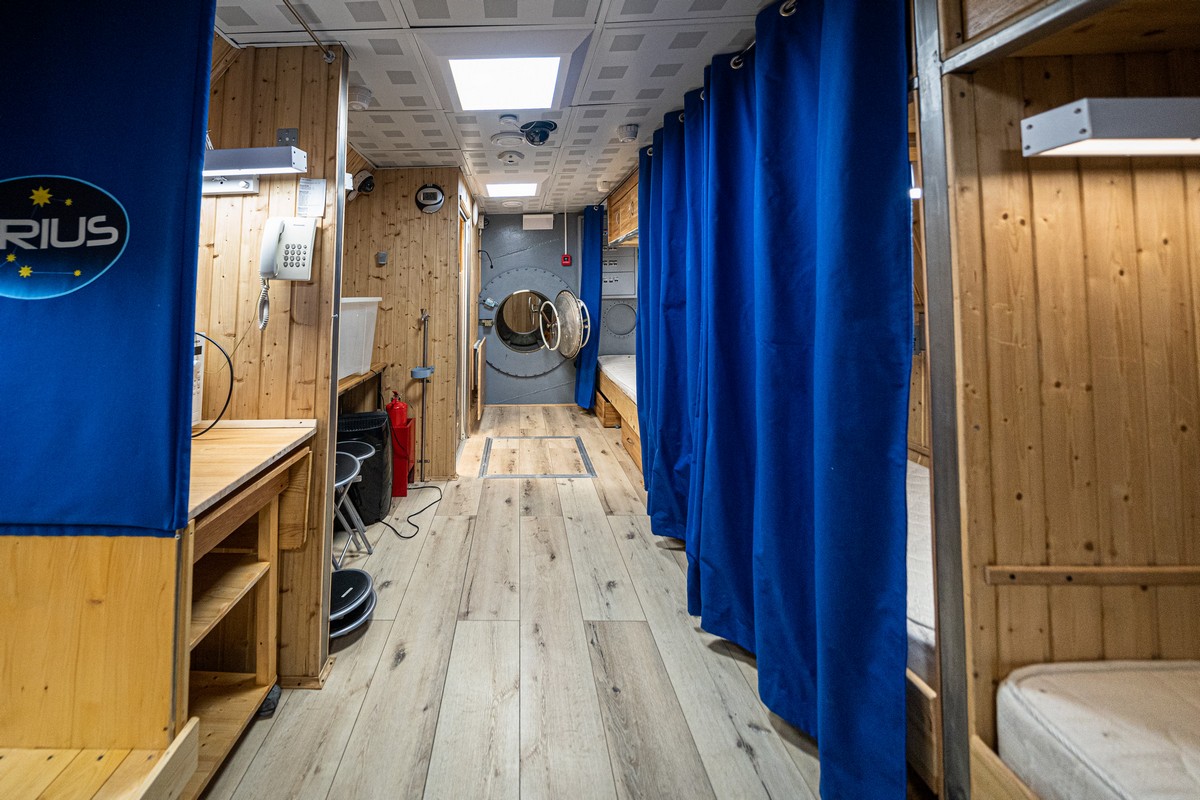 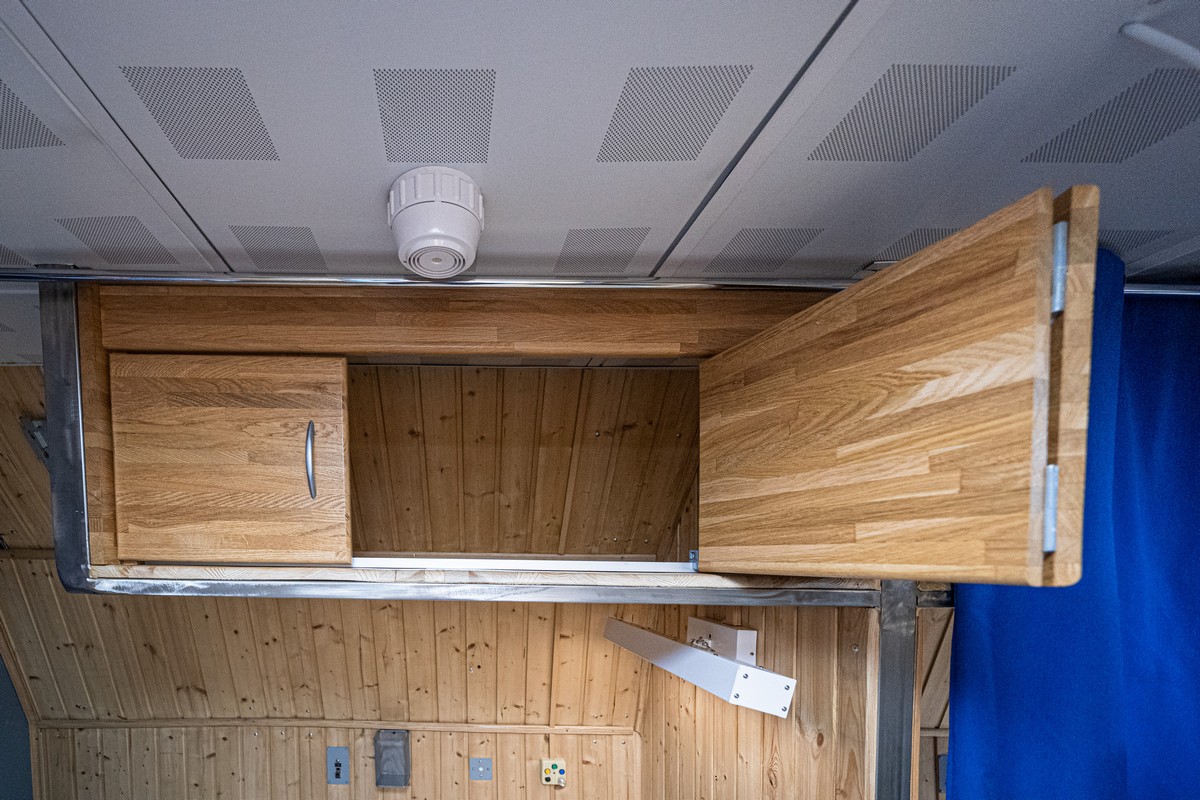 The airlock to the next capsule: 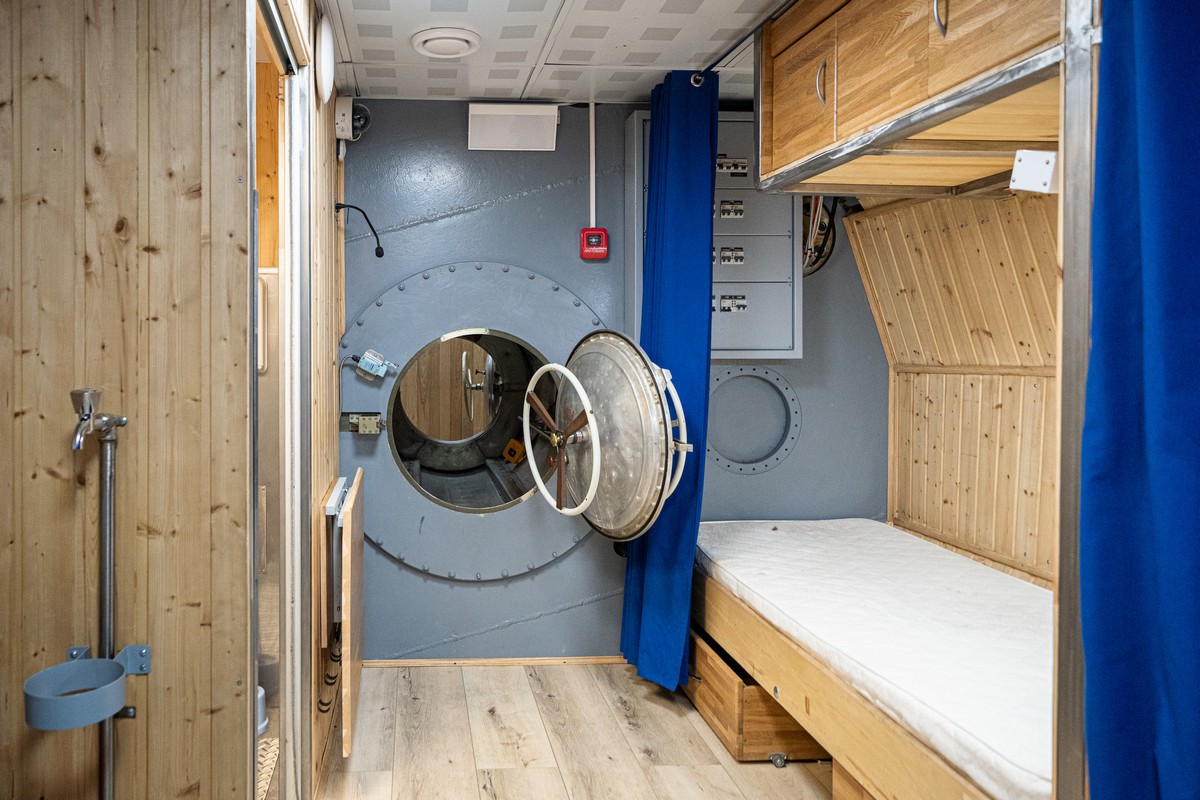 A closer look at the airlock:

Being a simulator – not the real thing – the capsules are handily fitted with doors too for visiting non-astronauts. Very humane ). 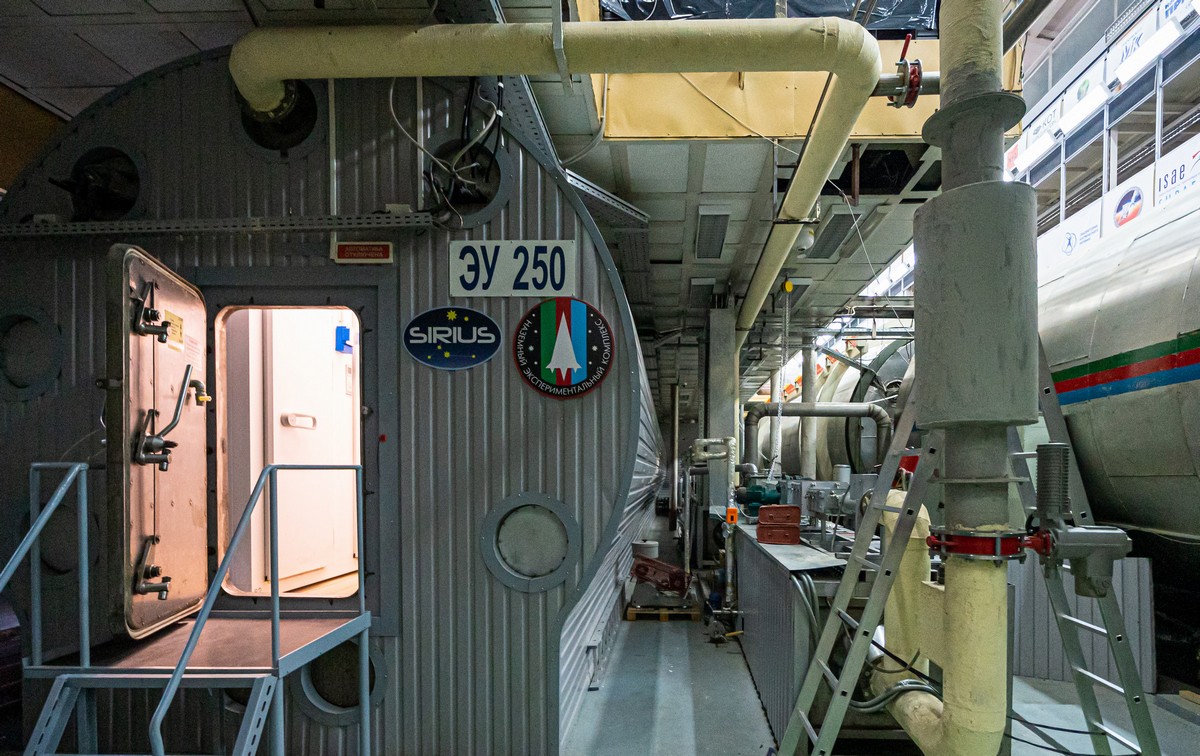 Here’s the storage space for food and equipment. Empty. Alas, there are no plans for another simulation any time soon, due to coronavirus (. 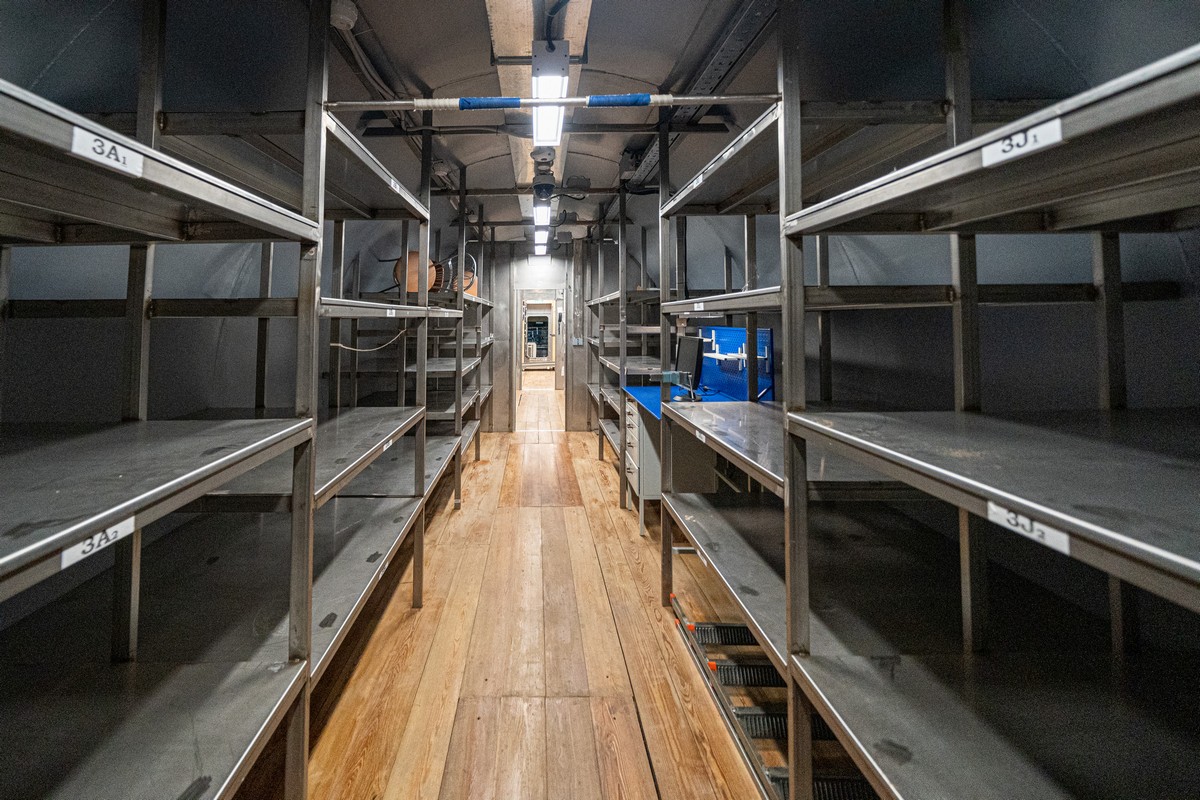 Cosmic greenhouse (even though there’s a fruit & veg market just down the road:). 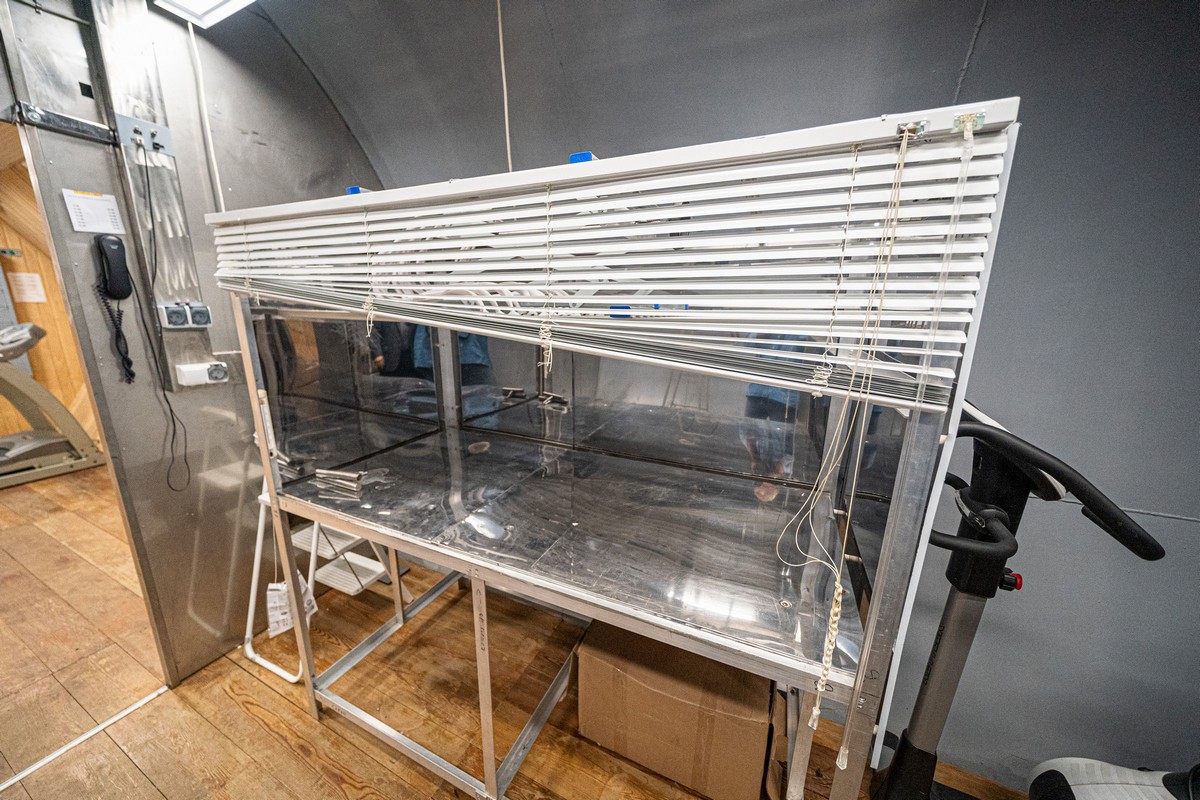 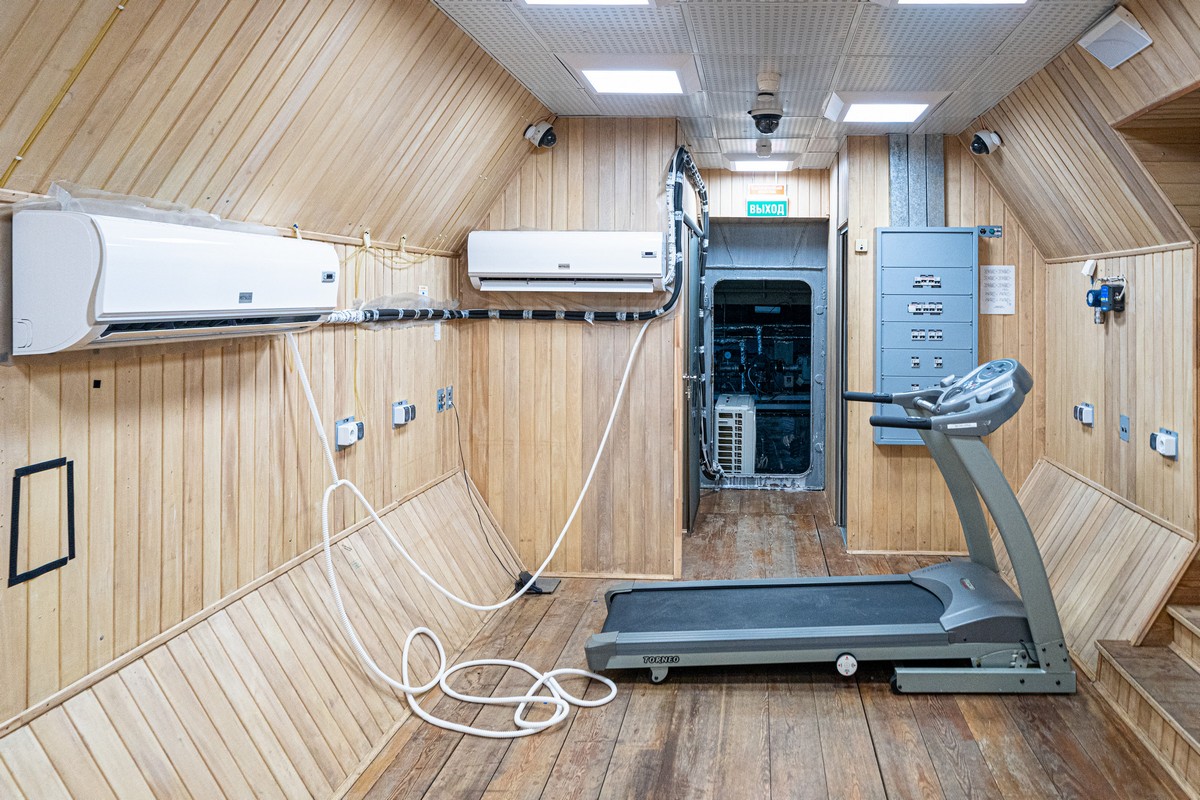 The hatch to the kitchen. A tight fit for some! -> 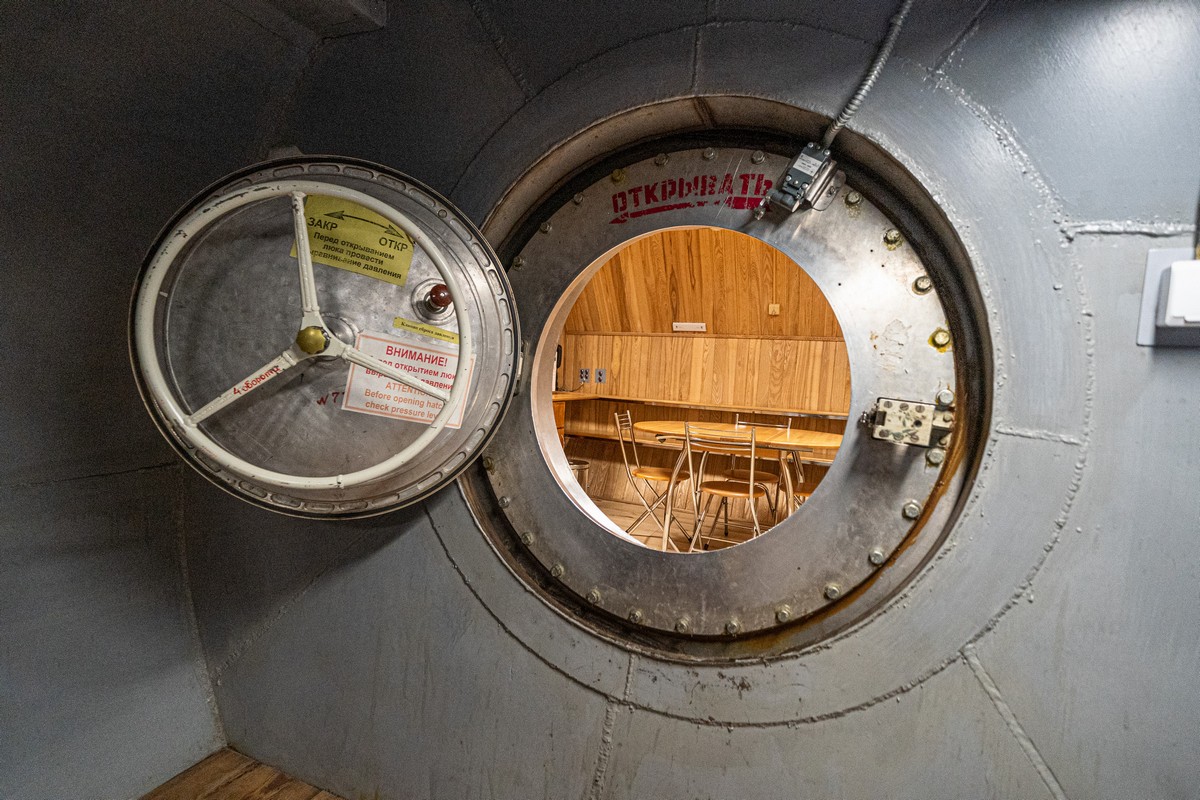 And here’s the kitchen. Of course – up in space you can’t have loose chairs and tables like that. There are chairs and a table, but you need belting into the chairs and the table is fixed to the floor. Have a look at my post on Star City for more on that. 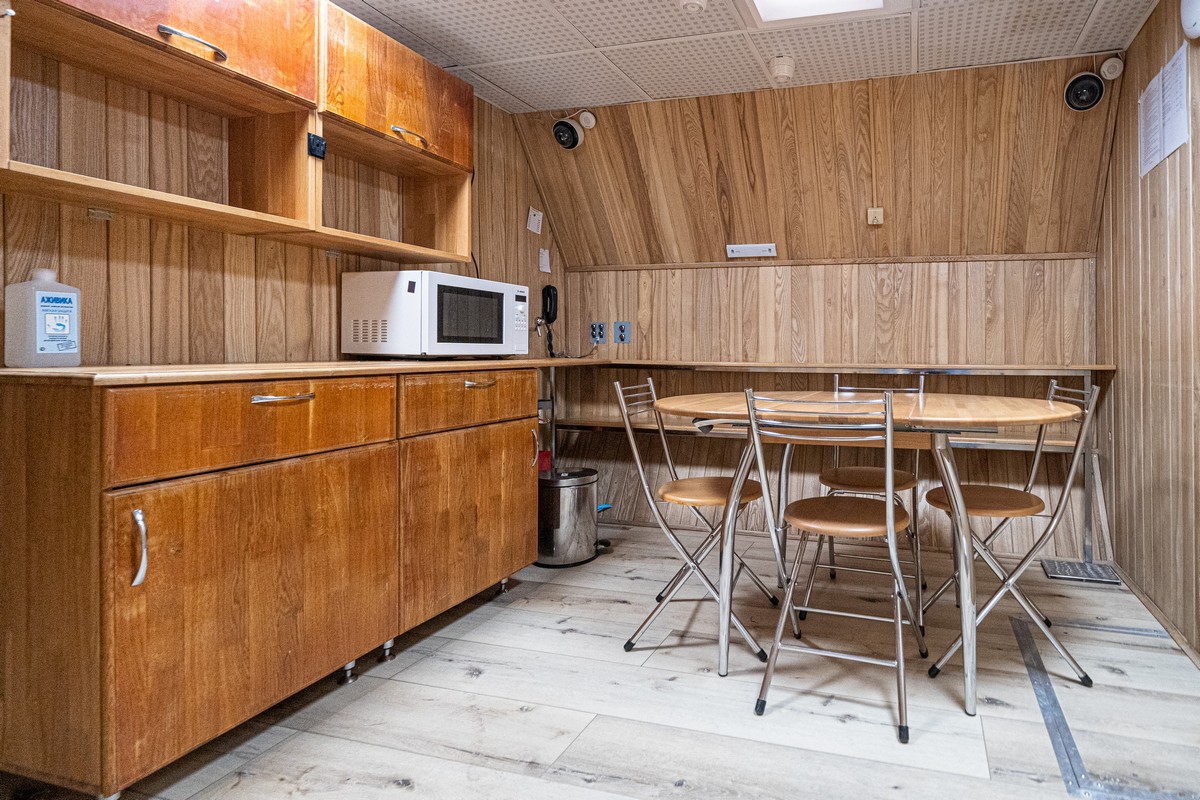 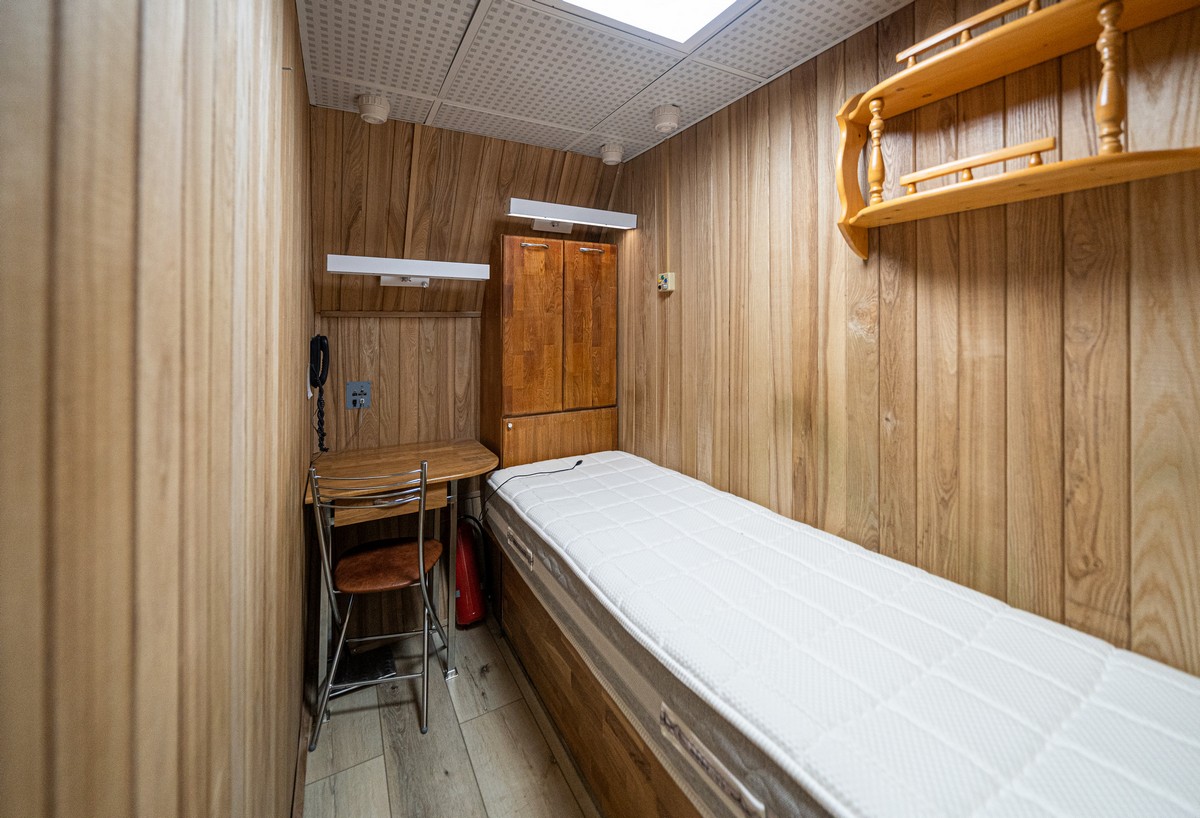 So there you have it folks – a perfectly fantastical-astronautical-cosmonautical installation right here in Moscow. Who’d have thought it?

Of course – all the controls are fully digital: 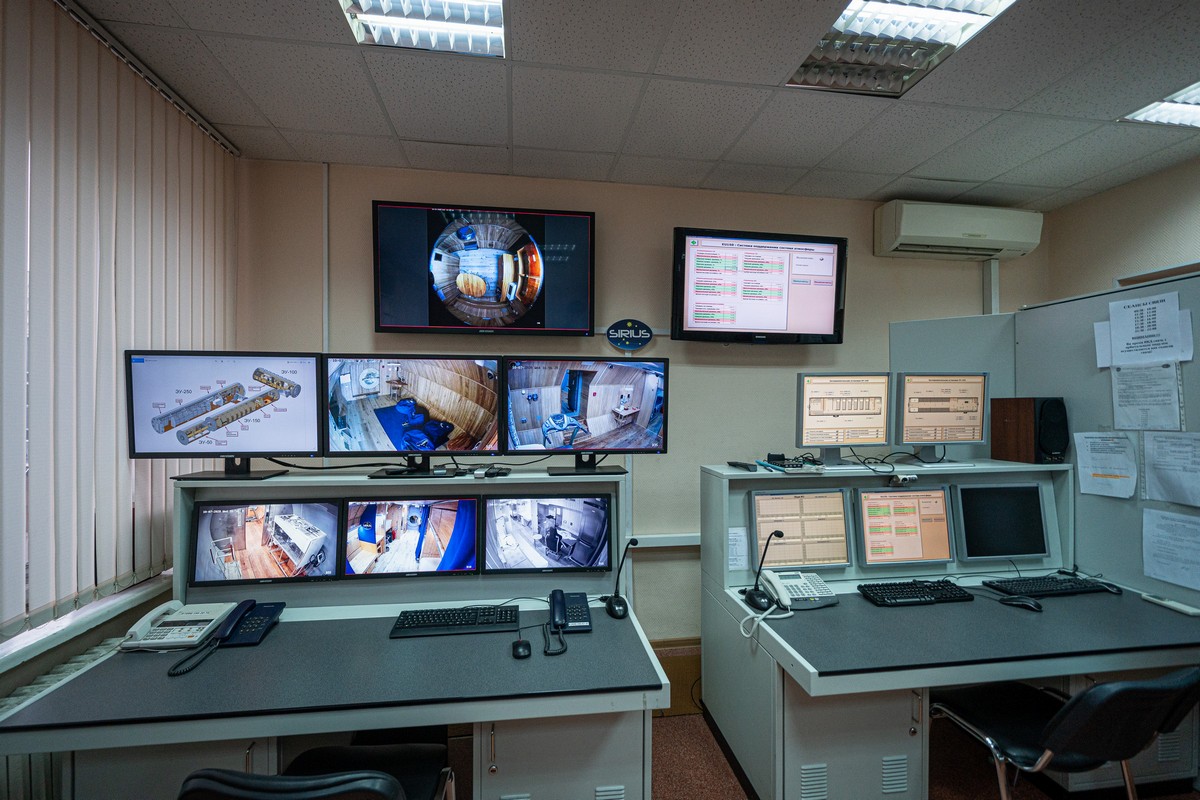 The simulation complex belongs to the Institute of Biomedical Research of the Russian Academy of Sciences. All sorts of other experiments are conducted at the institute – on both humans and other earthly lifeforms. How will they conduct themselves given weightlessness, in extreme polar temperatures, or underwater? What happens to the body, behavior, and mood – if that body, for example, sits in a motionless state for several days (enabled by special equipment that’s both designed and made here).

Here, for example, an experiment that’s lasted three days is coming to an end. ‘Dry’ submersion into body-temperature water: a simulation of a lengthy immobile state. The astro-researcher Elena Sergeyevna is feeling great! 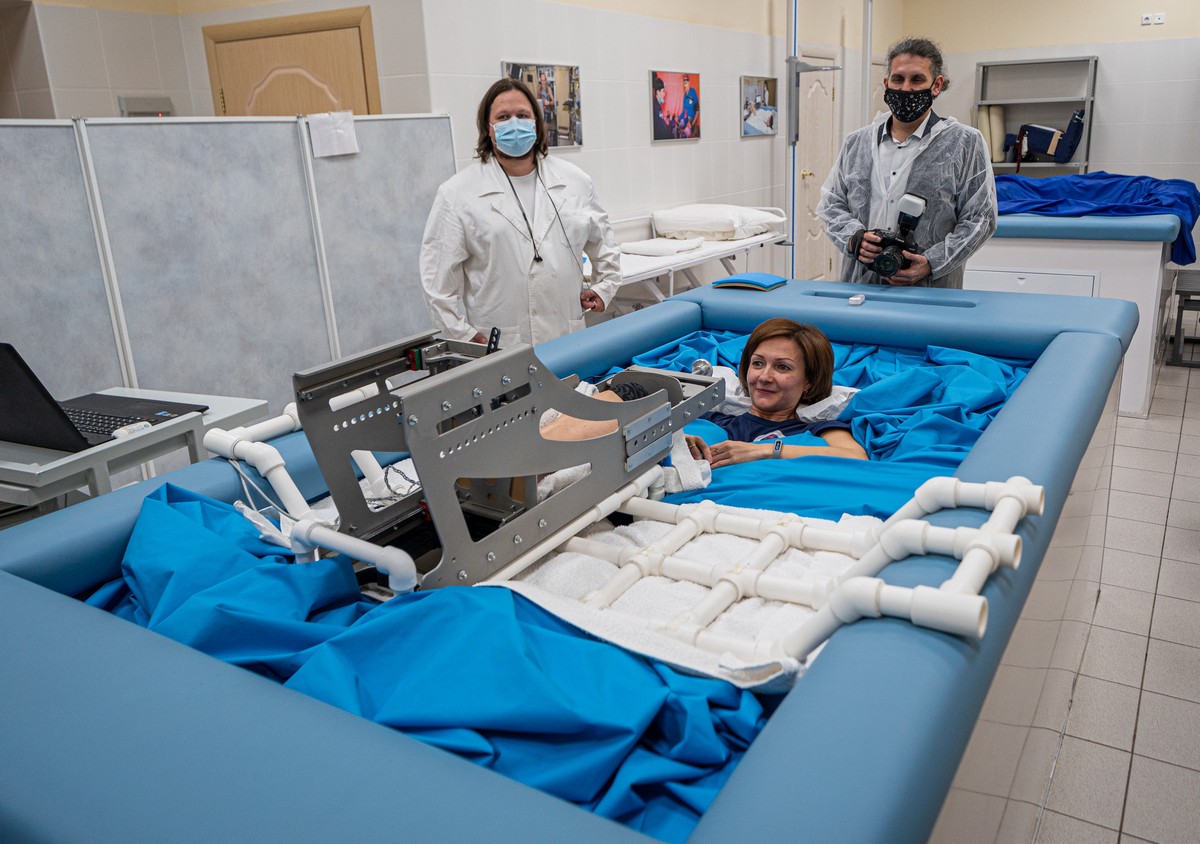 But she didn’t just lie there. She was pestered tormented (!) by assorted irritants, and they take various readings via various sensors as to her responses thereto. Looks… fun interesting. And when they suggested I have a go?… Guess my reply!…

At first it’s a bit too comfortable and cozy: you feel like you might drop off to sleep! Then you realize you’d wake up and have to stay right there (no getting up, no coffee, no news, no toast, no ablutions… aaaarrrrgh:). Yikes! Enough to send you round the bend! 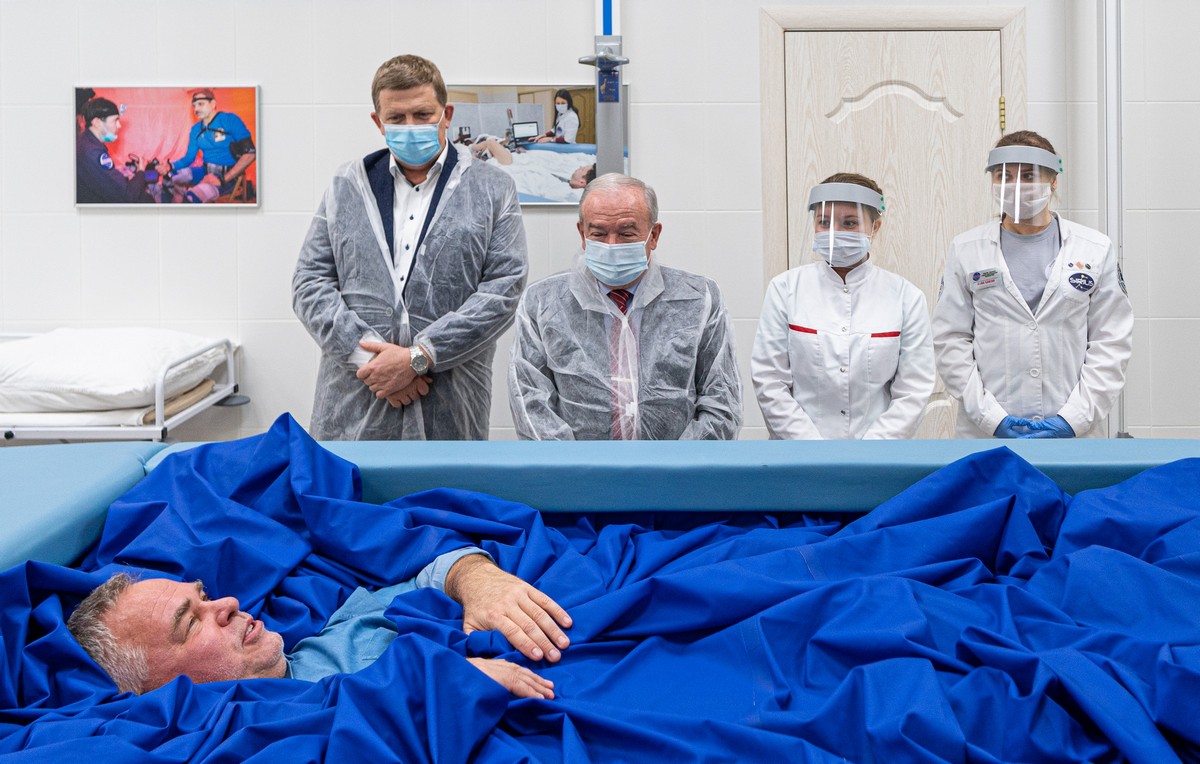 In another room there’s a unique (invented here) mini-centrifuge that increases gravity artificially. Reminds me of the larger one in Moonraker :). I thought such a contraption would only be for preparing humans for increased gravitational forces, but apparently it can also be used in the treatment of certain illnesses. I wonder if vertigo is one of them?

Next – a unique treadmill for use up in space in gravity-less conditions! The platform isn’t rigid – it’s kind of shock-absorbed so as to reduce the greater force of feet hitting it up in space. Apparently they have such running machines on the ISS. 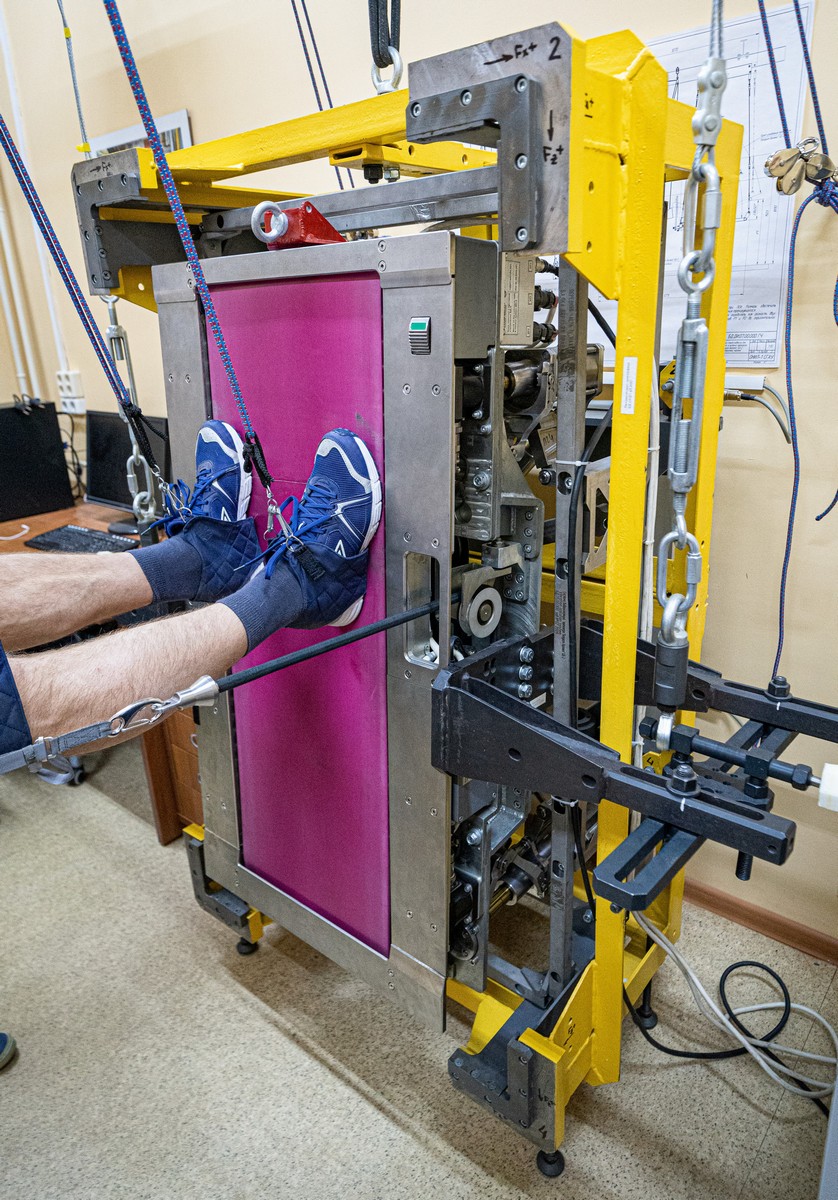 And there’s a lot more besides to be seen, but we simply didn’t have enough time to check it all out. No problem – I’ll just have to return for another go!…