Our second day in Namibia started very early – before the crack of dawn even. We were showered and packed before breakfast in the hotel was served. And this early-bird tendency stayed with us throughout the whole trip. Then, after our breakfast of a morning would follow concentrated levels of tourism, planned perfectly (or as near as darn it) so that we’d arrive at our next hotel (rarely the same hotel twice) around dusk, shower, have supper, and turn in for the night. Clockwork, basically ). Repeat 10 times! We call it ‘tourism till you drop’. And it suits us just fine!… 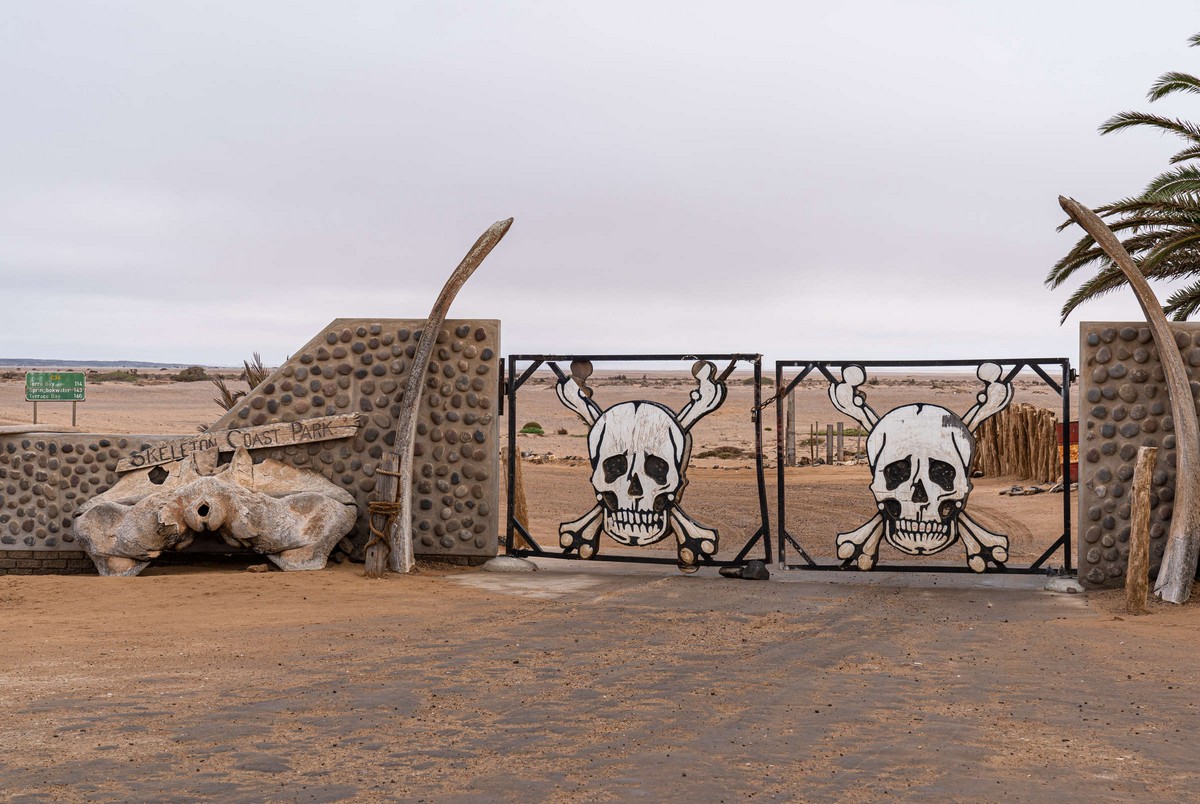 The term ‘Skeleton Coast’ is difficult to pin down. Some take it as the full length of the Atlantic seaboard of Namibia; others – half of it, from the border with Angola to the north and down to Swakopmund, which is around the mid-point along the coast. There’s another definition: from the Cunene River (mid-Angola), down to the Swakop River (mid-Namibia). But since most definitions agree on the ~half bit, I’ll use that one too. This is important, as some pics of what is purported to be the Skeleton Coast aren’t really of the Skeleton Coast at all, and many of those pics show some very pretty scenes. For example:

All very nice. But those aren’t of Skeleton Coast! And even ‘respectable media outlets’ fall for the same thing. Where you see beautiful dunes – those are to the south of Skeleton Coast, somewhere between Walvis Bay and Lüderitz, here. Along Skeleton Coast the dunes are at least two kilometers inland. 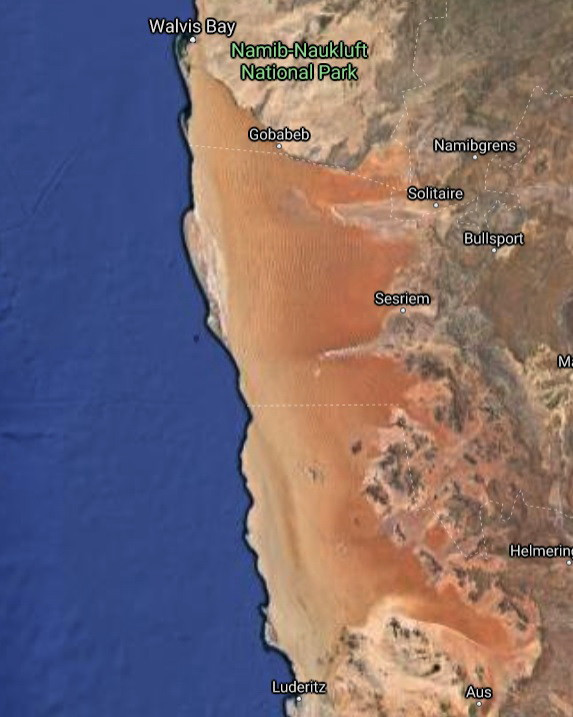 But maybe all the ‘wrong’ sources should be forgiven. After all – even Wikipedia states that the Eduard Bohlen shipwreck sits on the Skeleton Coast, when, actually, it, too, is in the dunes to the south of it. 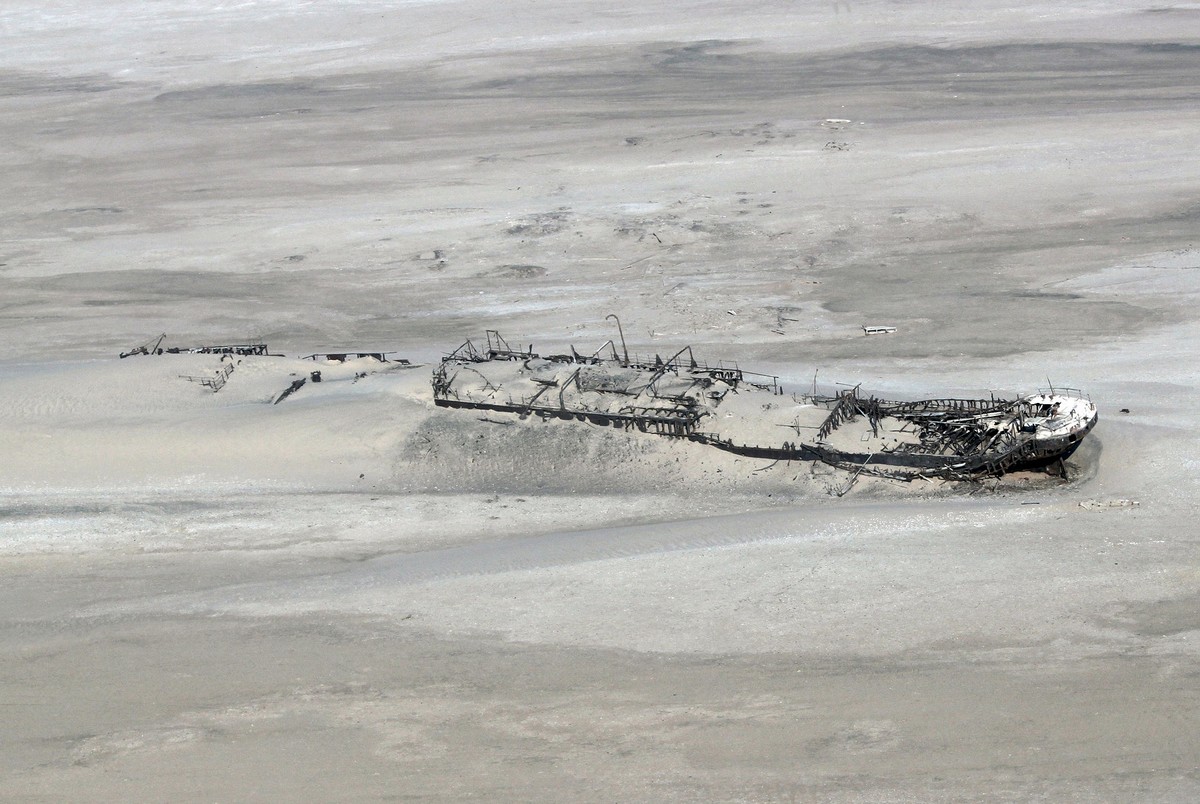 After driving some 80km from our hotel, we arrive at Skeleton Coast National Park. At its gates – a welcoming elephant skull: 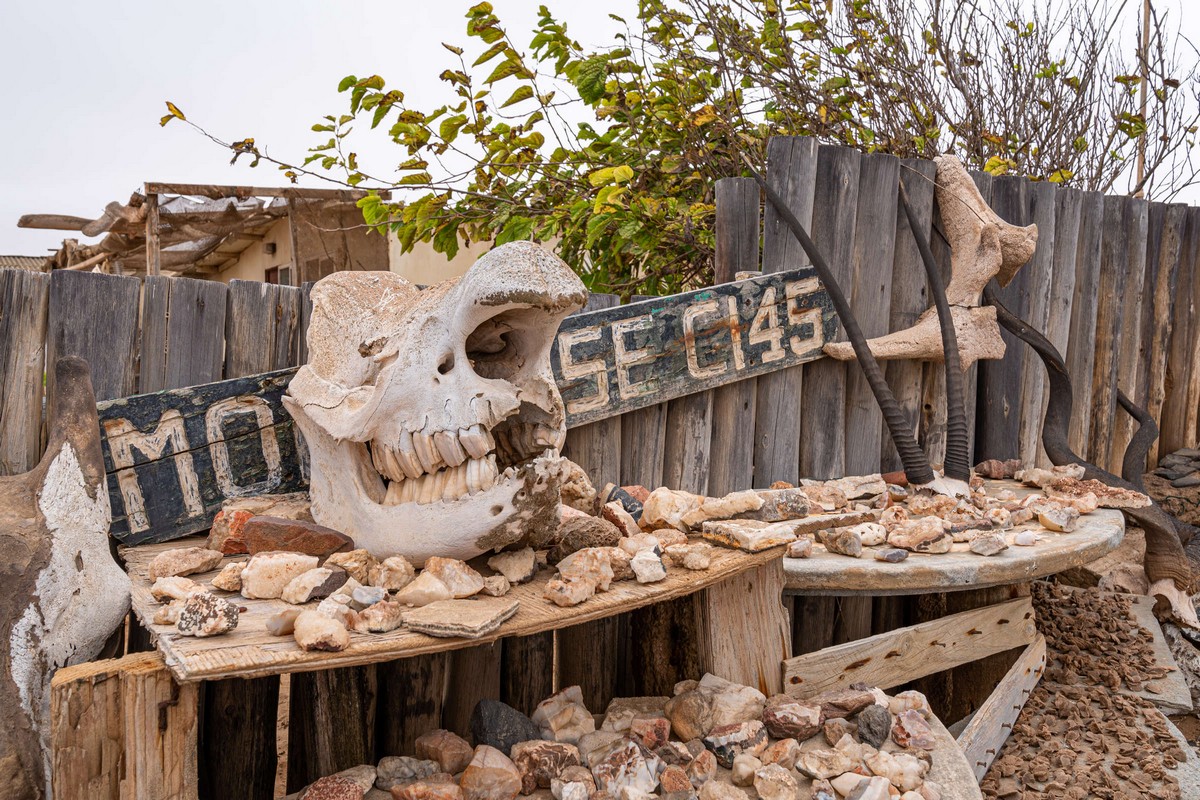 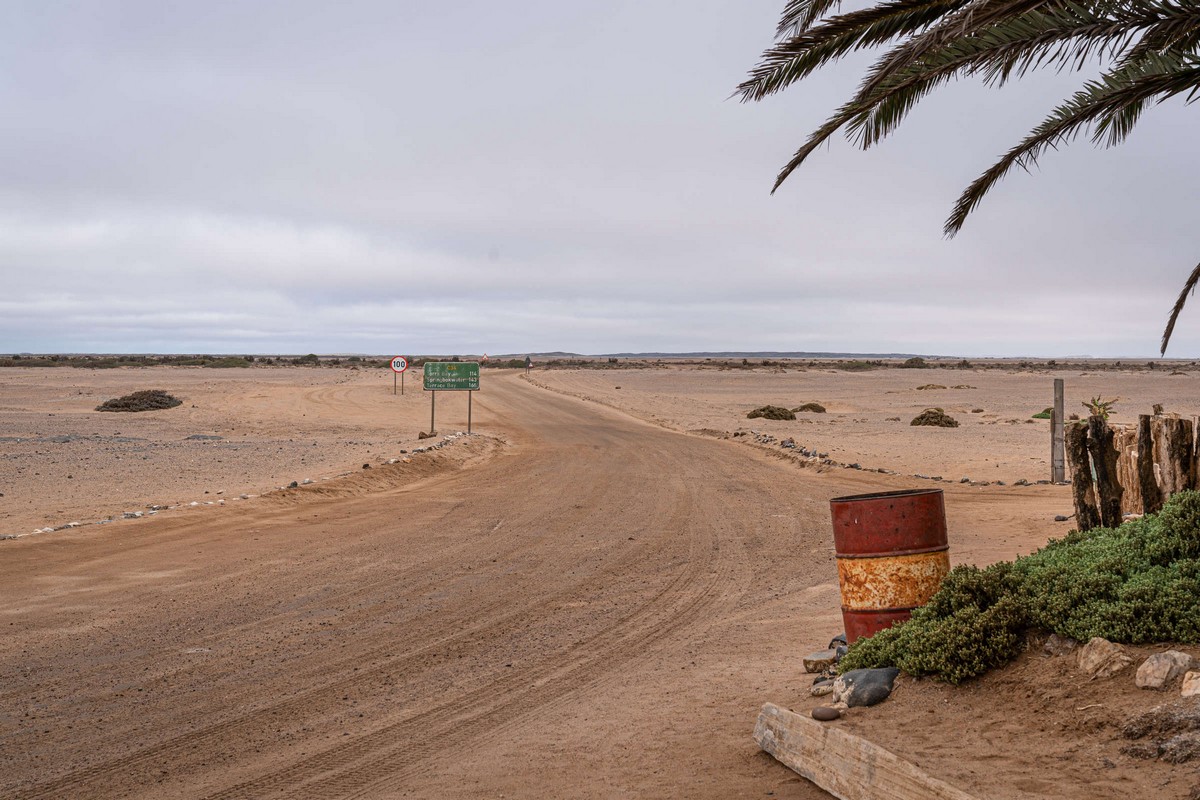 …Up to Terrace Bay. 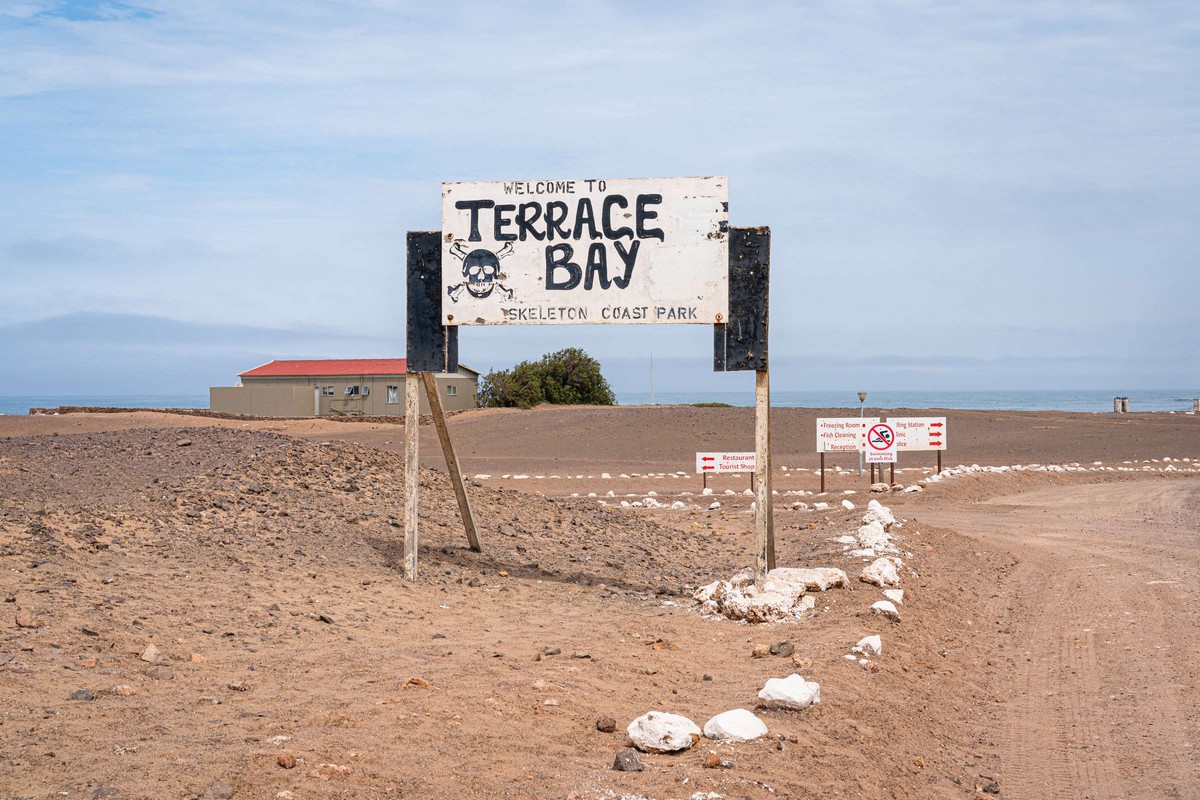 Later – back down the same route south, and a little further and to our hotel in Swakopmund. In all this day – 640km on the road, with regular stops for walkies and photos. 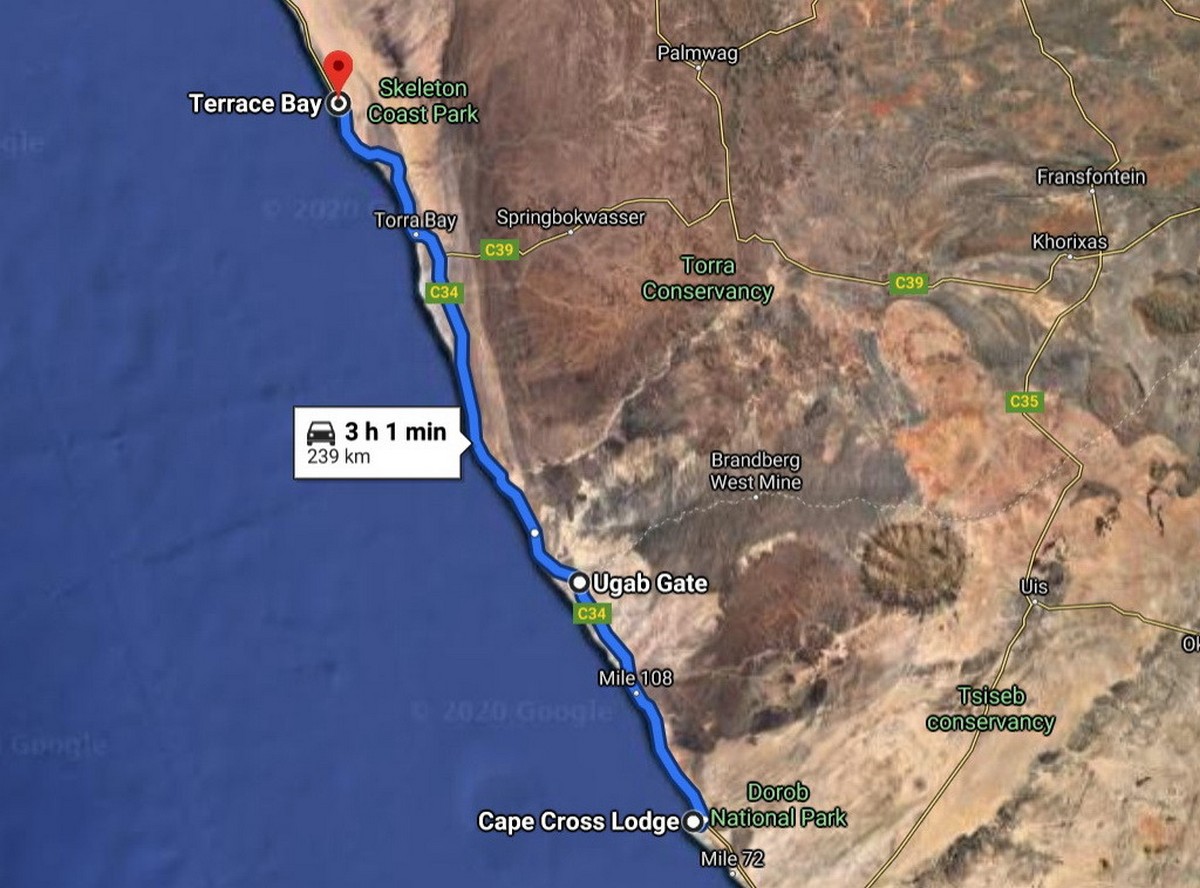 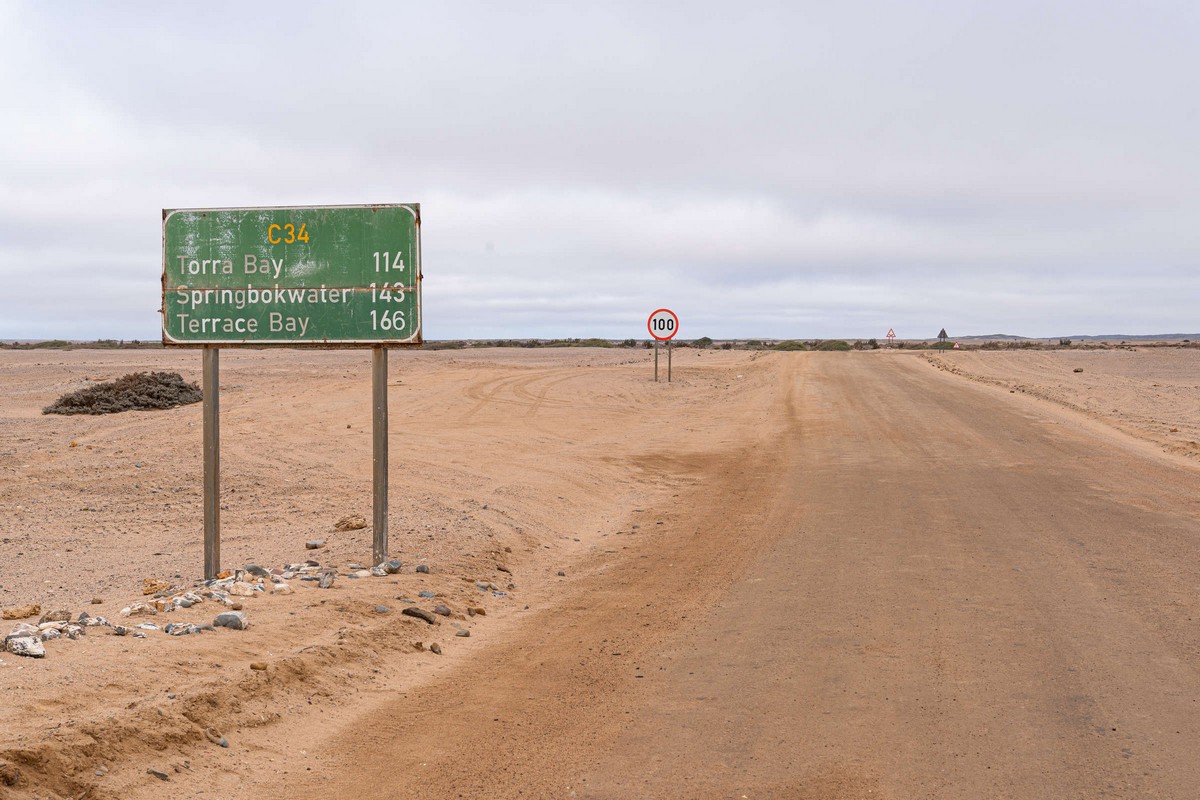 The roads, just like the day before – were (mostly) of really good quality. They get a bit sandy, but underneath the sand – all as it should be. 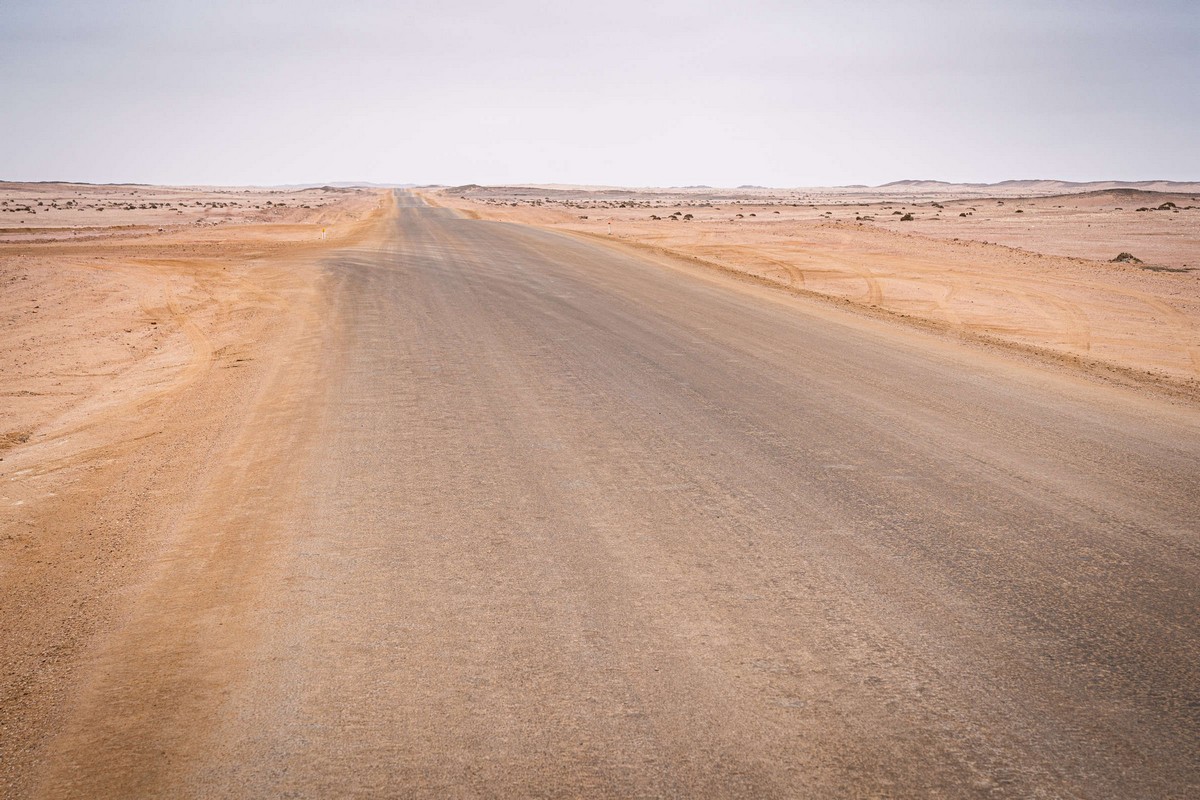 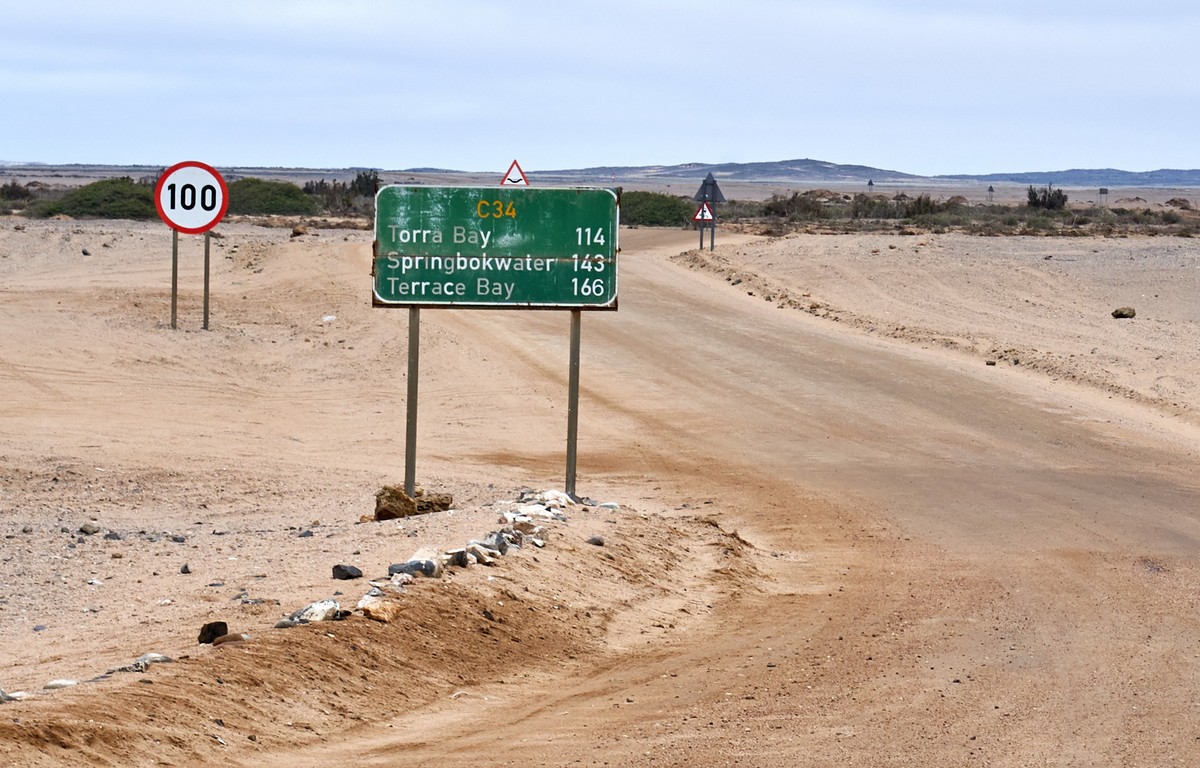 On one stretch the road was strengthened with salt (of which mineral there’s a lot round here), making the driving even smoother. 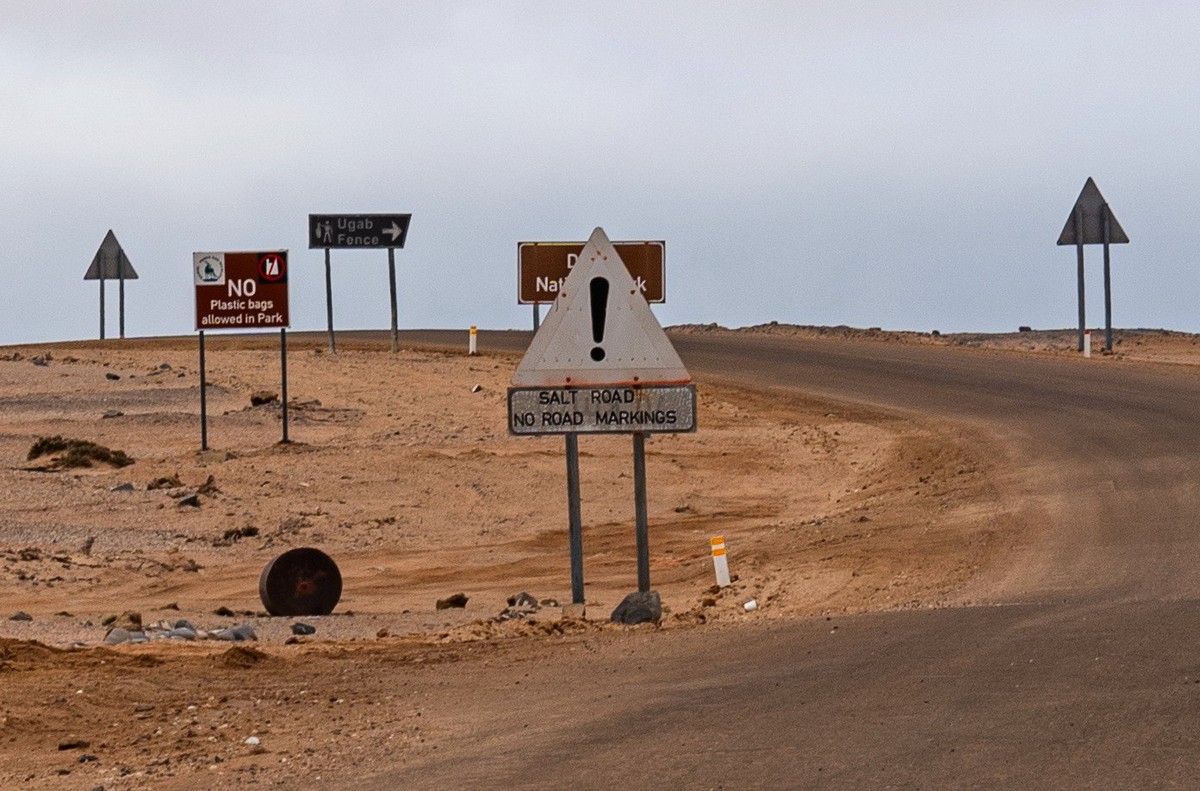 I only wondered what would happen with all this salt on a rainy day? Surely it’d all turn into ~soap? Not that I need have worried though, I guess. Skeleton Coast is among the driest places on the planet!

As we got further north, the roads became – gravelly tracks! Still smooth, mind ). 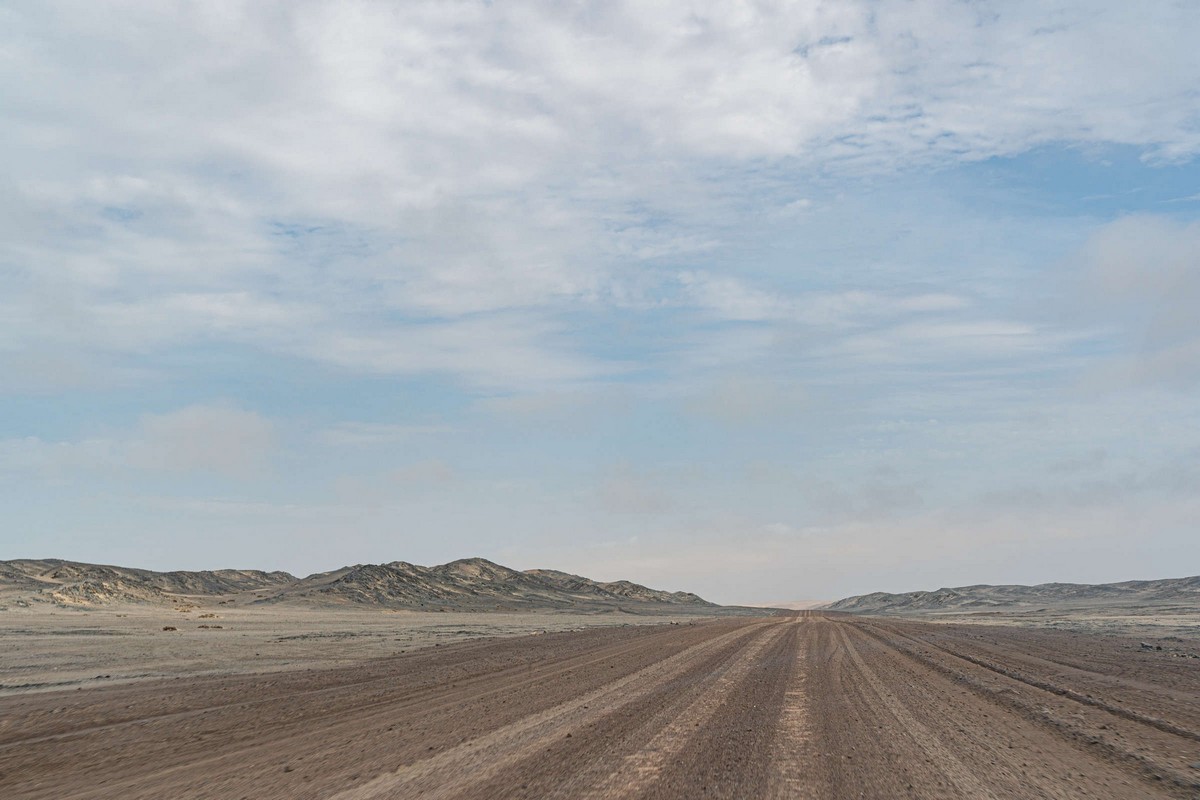 Oh my. Further north yet – they turn into mere sandy tracks! 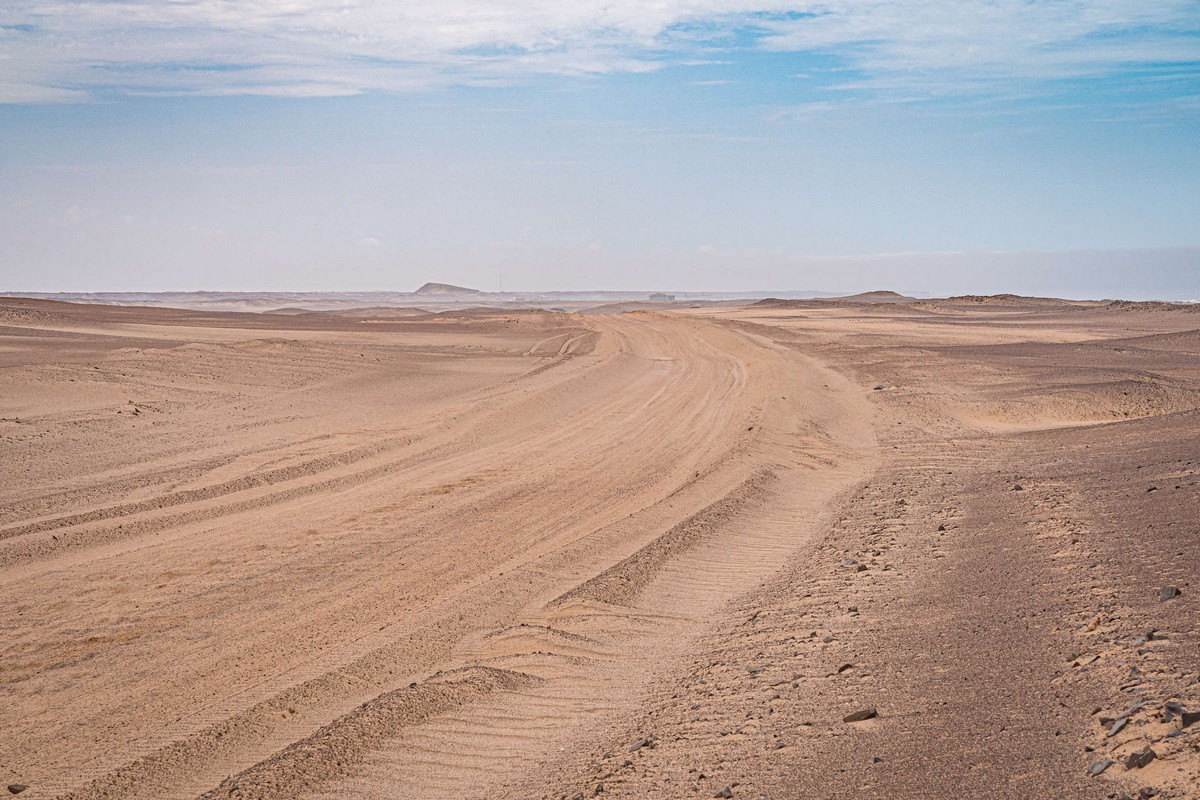 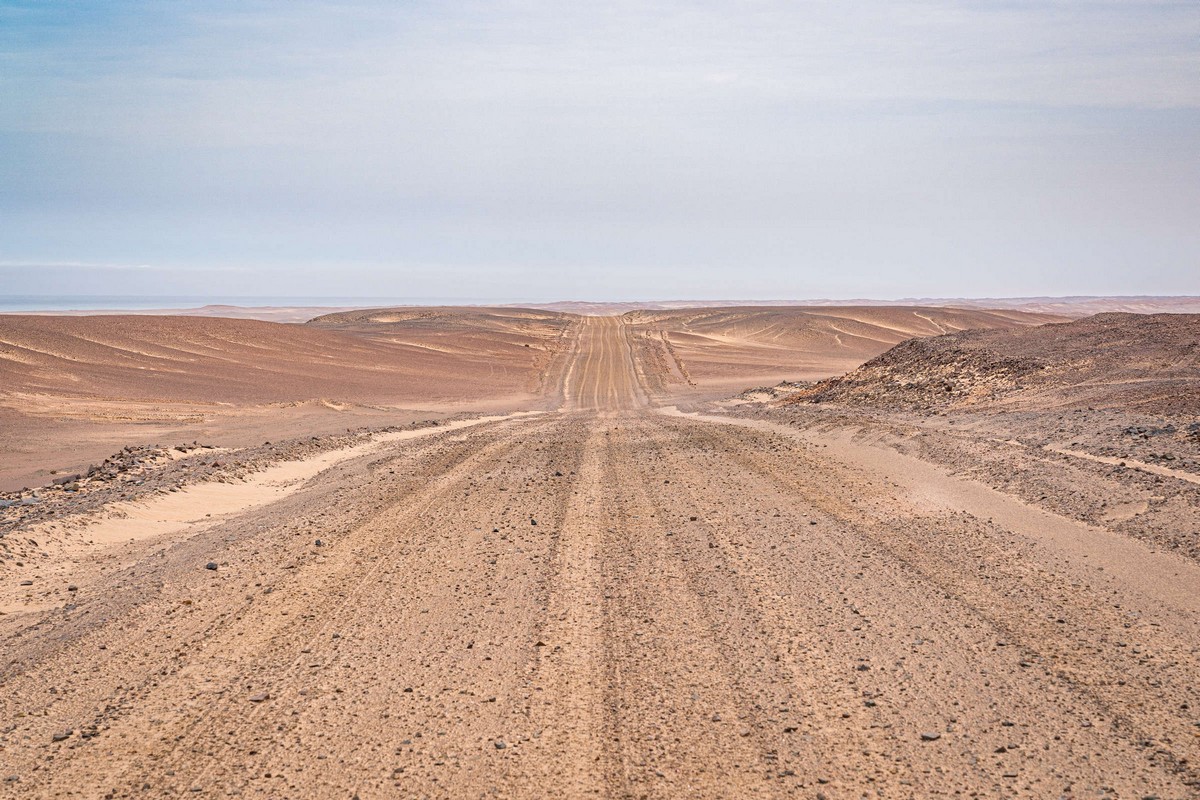 And often to the side – ocean! 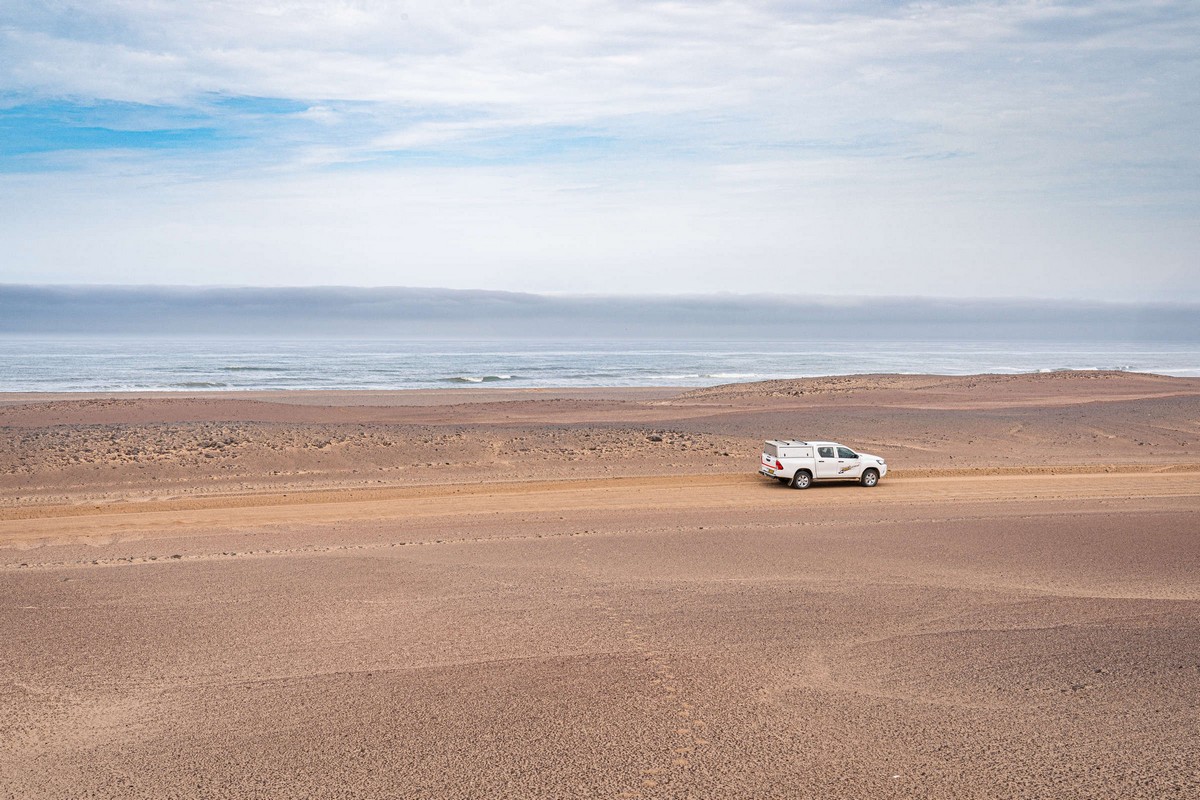 Of course, with ‘roads’ like these, a 4×4 is what you need. But the other two-thirds of our group insisted a minivan would be best, so as to all be together. This was fine – most of the time… 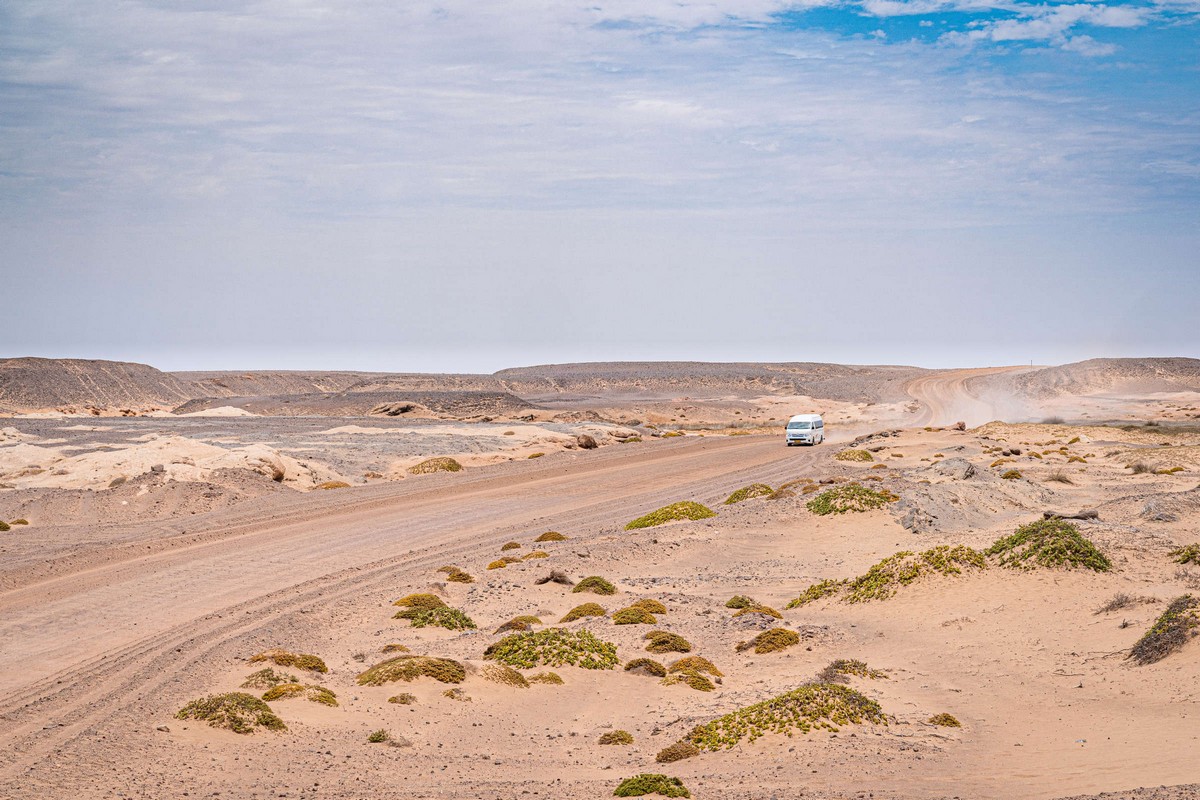 But when the ‘roads’ got real bumpy – they didn’t like it one bit. They said it got so loud that they had to communicate with one another via WhatsApp! 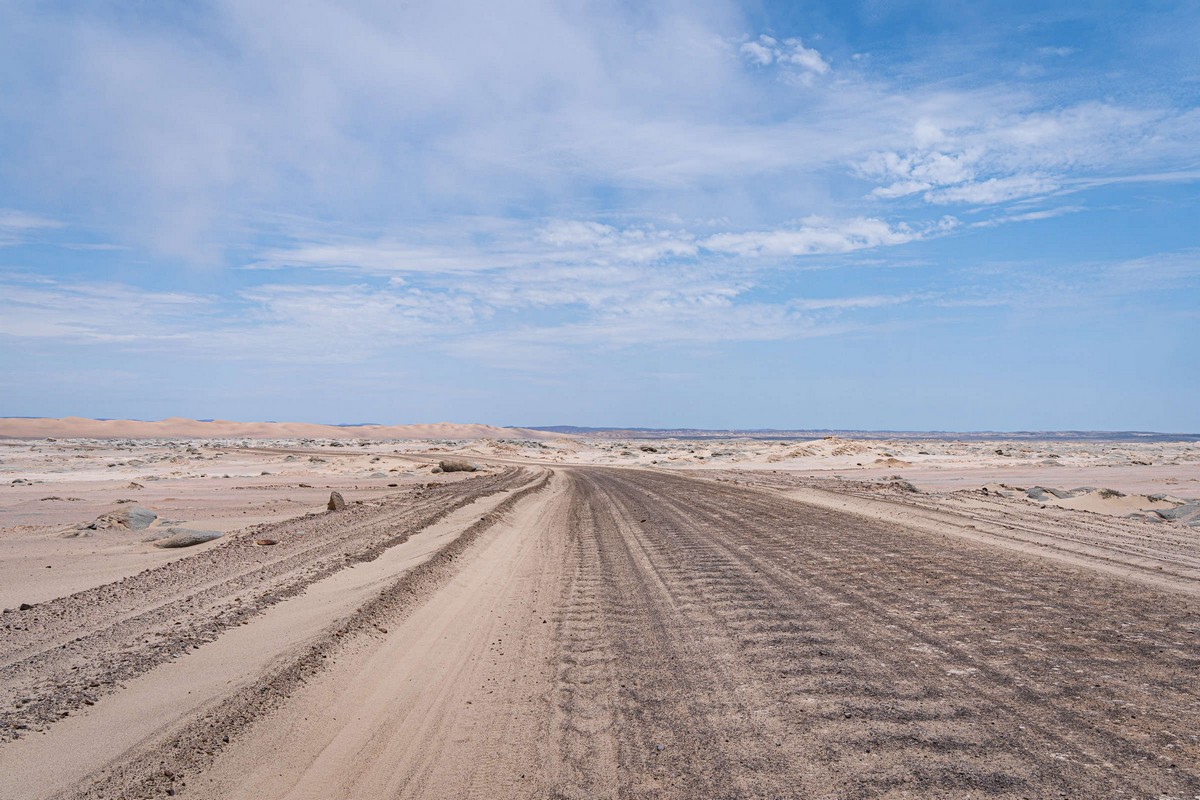 It was only the bumpy ride, however, that was a bit of a downer. Everything else was simply amazing – from the road surfacing to the quantity of paysages to the left and to the right.

The signposts of course were a big help. Sometimes we wondered how we’d have coped without them: 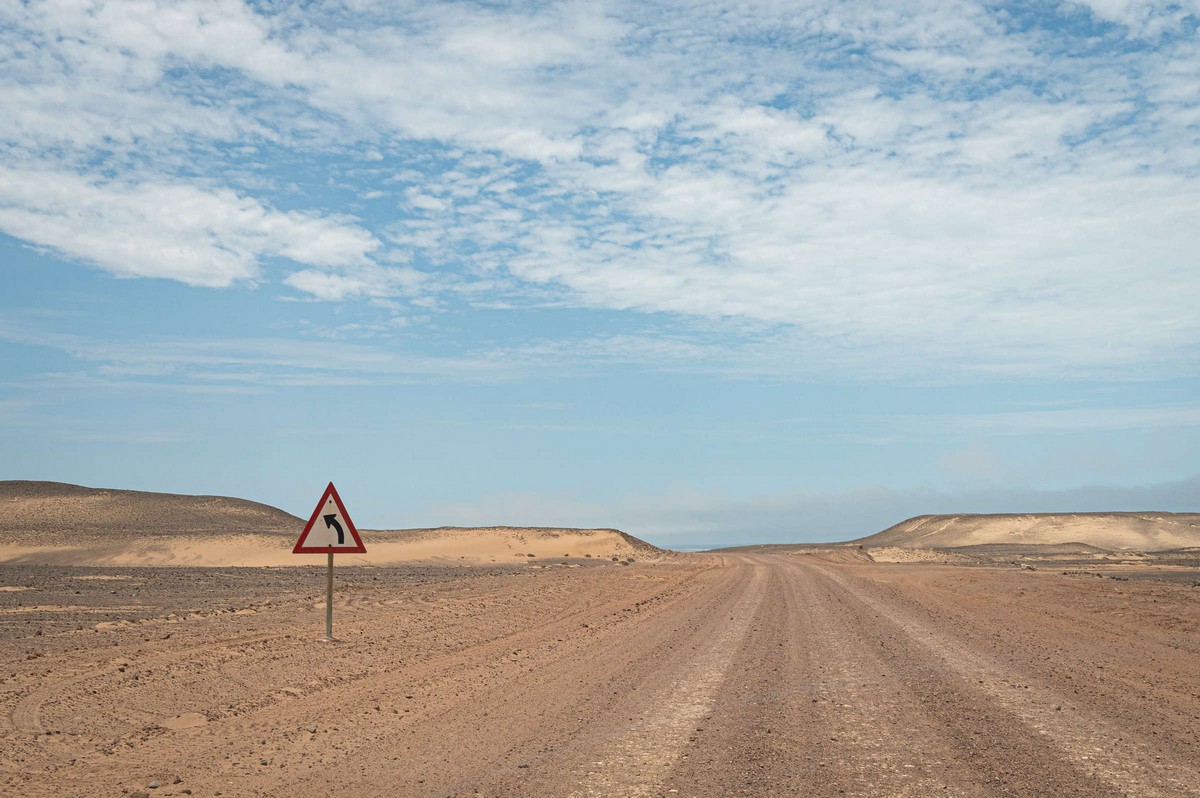 We finally make it to Terrace Bay. 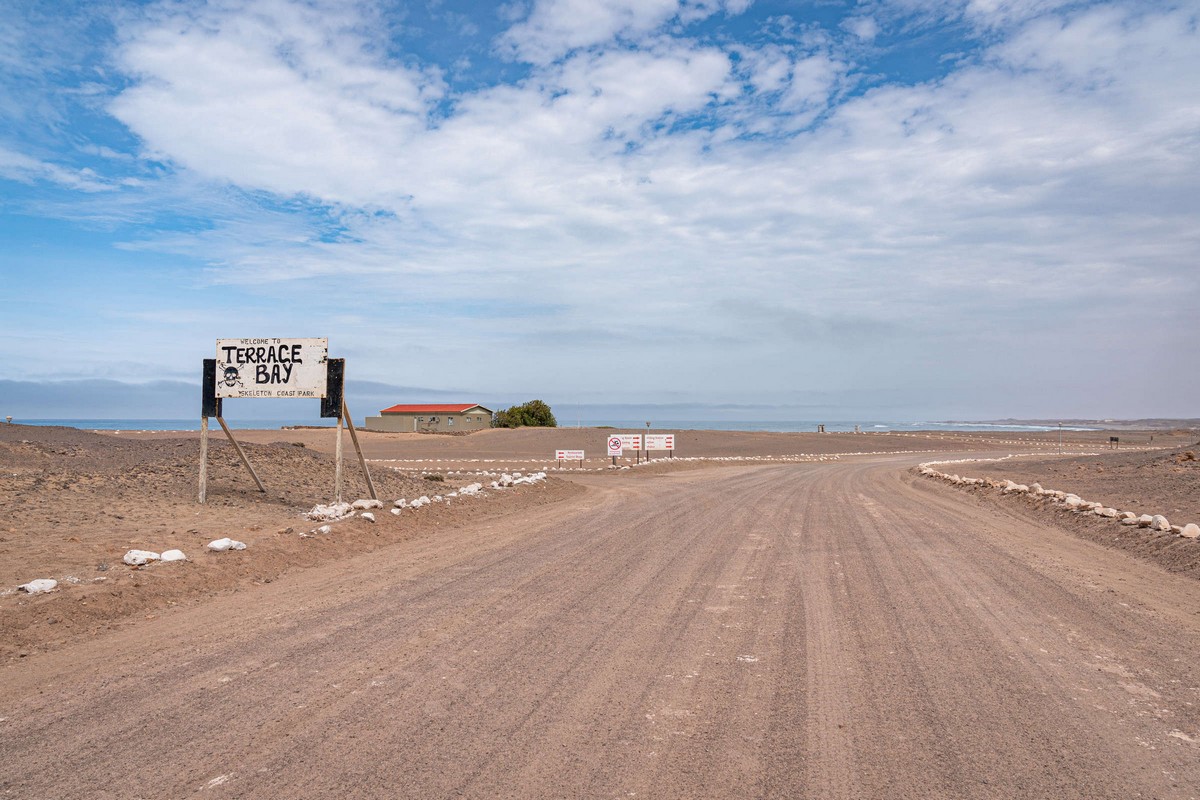 For some reason I was expecting more, but Terrace Bay turned out to be tiny: two dozen bungalows, a filling station, a car repairs garage, and a village store. That’s it. Oh… and an ‘airport’. Which was also tiny: a strip of gravel for a runway and a single building! 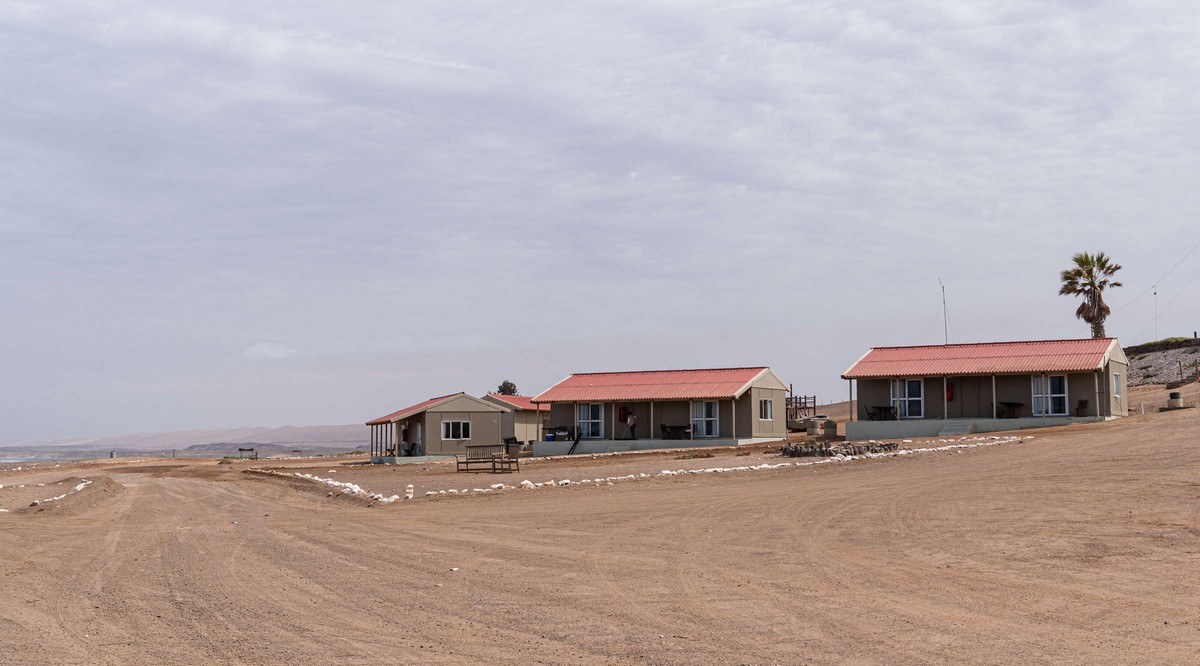 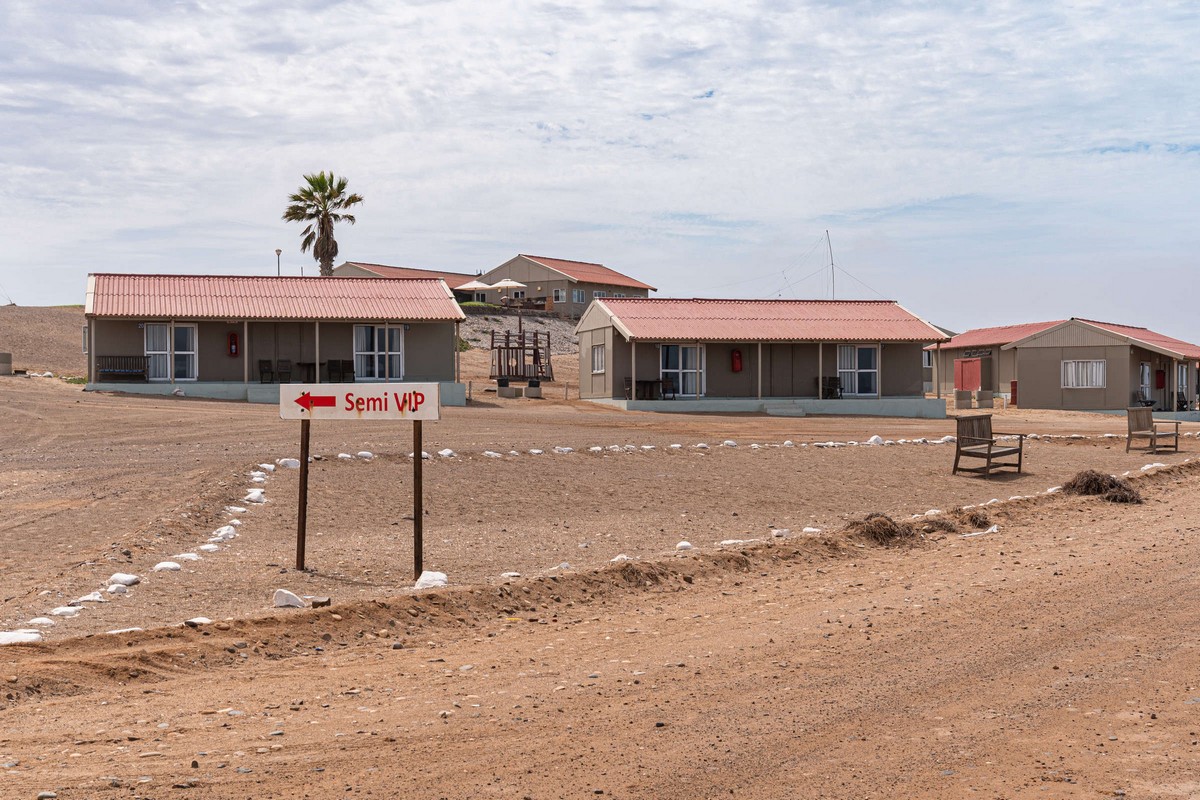 And that’s all I have to say about Terrace Bay. It was really just a nominal ‘destination’ for us. We headed for it as fast as our vehicles would carry us, with hardly any stops. That was the plan: get there asap, then on the return leg we’d take it easy, lots of stops, lots of brief off-piste walkies. Leg one: Formula-1 Grand Prix; leg two: if Buddha were to have had a car… ).

Looks like sand? Actually – it’s not sand at all… Turns out it’s very coarse sand plus some red-brown stones.

The sand’s all been blown away here. Leaving these here constructions behind:

But no matter how barren the conditions are out here – there are still some signs of life. What they must drink heaven only knows… 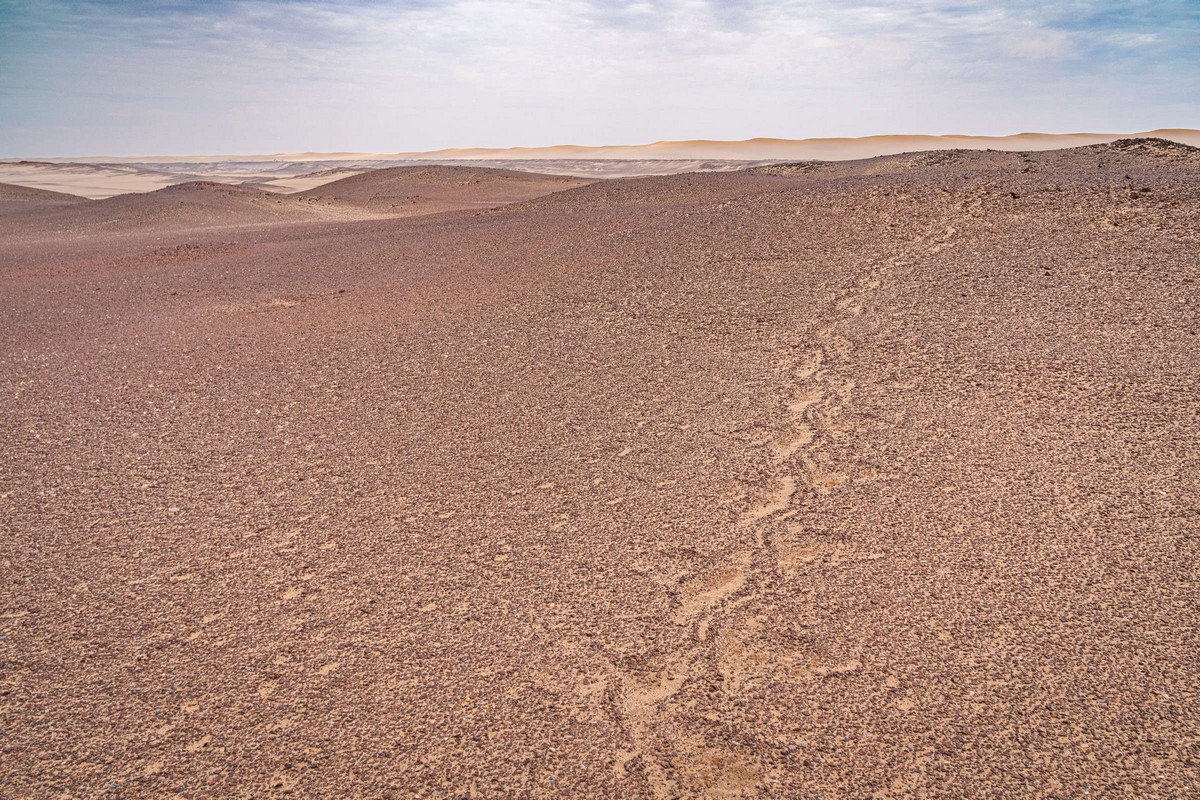 Suddenly – woah – another car! Wholly unexpected. Despite traveling 300km+ on this day, we saw less than a dozen other cars! And from where did the folks in this other car hail? Moscow! Yes, really. It is indeed a small world ).

Their car headed over there… Which made me want to go there too. Maybe next time…

Next up – time for some off-road, on-dune driving! We turn at the respective signpost. And there they are – up ahead!

They’re a few kilometers inland. Looking back – the ocean:

Alas – we couldn’t actually drive on them. The road doesn’t take you up to them, and we didn’t have the time to fine a suitable access point. Oh well – at least that’s another reason to come back. And when I saw how some folks were strolling about up on the dunes – well that’s that: we MUST return!

Now a bit about the other (few) vehicles we saw on the road. These aren’t tourists; they’re… fishermen!

One thing’s for sure – it doesn’t get crowded round here: plenty of space for everyone…

Occasionally we come across signposts indicating this or that fishing location. Interesting names. Often things like ‘4×4 only’ have been added… 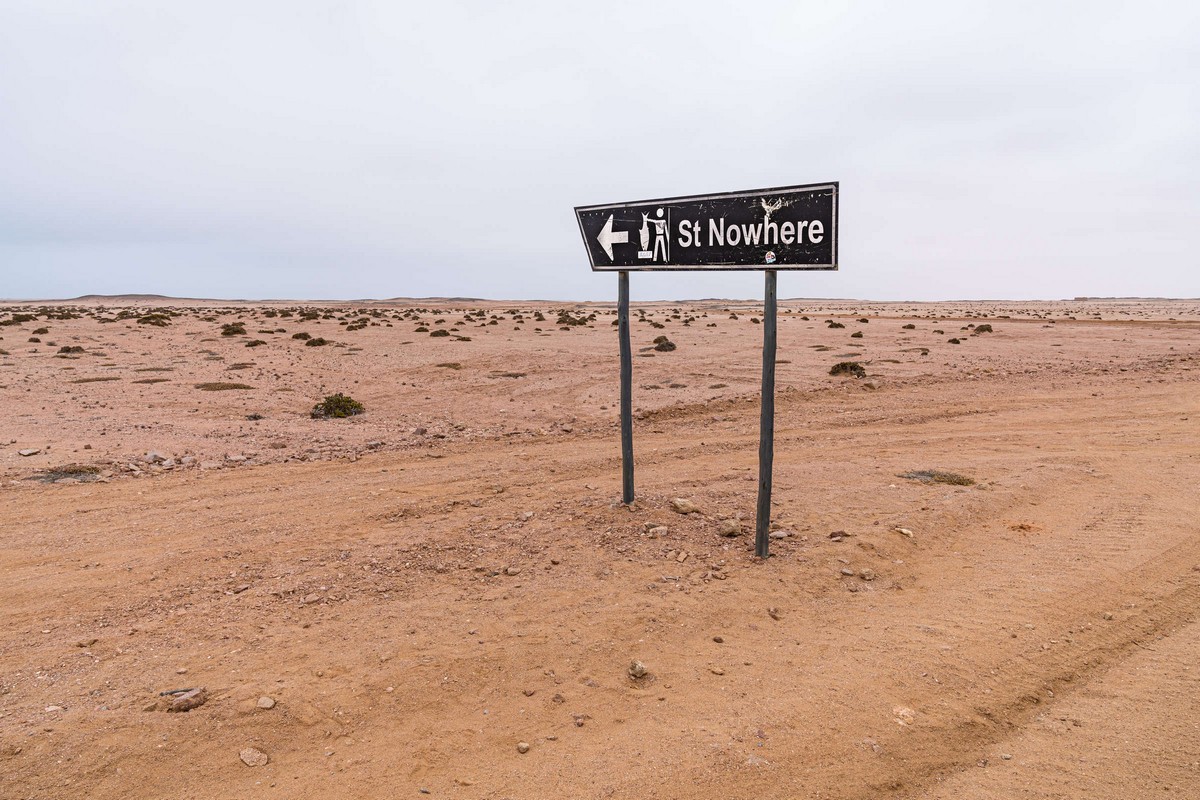 Another ‘populated settlement’ along the way, called Torra Bay, turned out to be a mere camp made up of tents! Gazebos, awnings, camper vans, barbecues, solar panels, and lots of fishing rods! The settlement’s sign is made out of some kind of ancient ship’s mast. No doubt washed up on the shore during a storm.

Next to the settlement – mysterious blue stones. How did they come about? Blue with bubble-holes, right next to pink rocks?

These must be left over from a geo-catastrophe when the ancient continent of Gondwana broke up into pieces, and huge quantities of magma poured forth around the edges, transporting the old material, turning one into the other, adding basalt rock in layers of sedimentary plates. Cool! If only we could have seen the spectacle unfold!

Another thing Skeleton Coast is known for is the great many shipwrecks along it. In fact, that name comes directly from a shipwreck:

“The name Skeleton Coast was coined by John Henry Marsh as the title for the book he wrote chronicling the shipwreck of the Dunedin Star. Since the book was first published in 1944, it has become so well known that the coast is now generally referred to as Skeleton Coast and is given that as its official name on most maps today.

On the coast, the upwelling of the cold Benguela current gives rise to dense ocean fogs (called cassimbo by the Angolans) for much of the year. The winds blow from land to sea, rainfall rarely exceeds 10 millimetres annually and the climate is highly inhospitable. There is a constant, heavy surf on the beaches. In the days before engine-powered ships and boats, it was possible to get ashore through the surf but impossible to launch from the shore. The only way out was by going through a marsh hundreds of miles long and only accessible via a hot and arid desert.”

But it’s not just ships’ ‘skeletons’ that dot the coast here: so do those of whales:

Wooden boat – but with a motor! I wonder what happened to the stranded fishermen onboard?

You can just about make out the markings: ‘Fukuseki Maru No. 7’. Been there two years:

Back onto the road. Mirage ahead!…

Beware of the lions? Out here in the desert? Actually – yes! They feed on tourists seals and the like. Once they were hunted as they attacked cows; now they’re protected.

We didn’t see any lions here; but we did get a puncture! 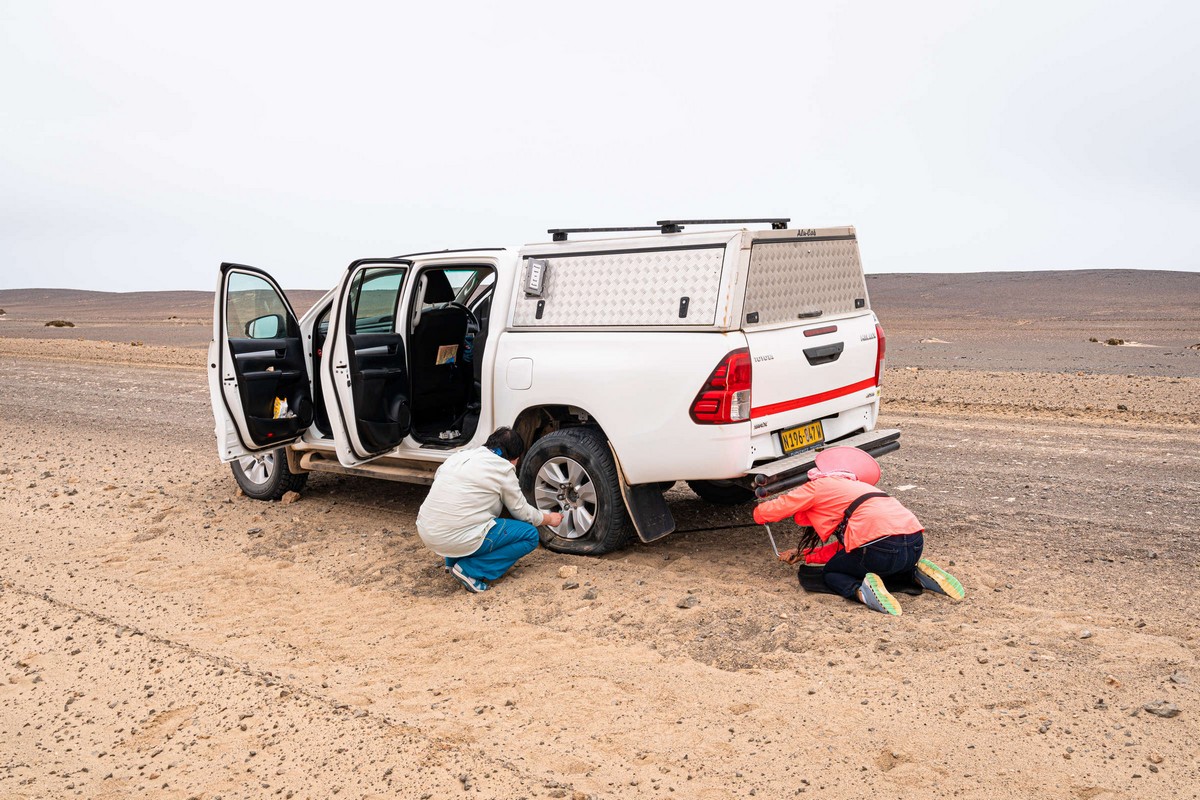 And that was that. Skeleton Coast – done. And that’s all for today folks. Back soon with more tales from the Namibian side…

All the photos from Namibia are here.