All righty. Finally, let me get this African series fully underway. On today’s menu, my initial impressions of Namibia, particularly – its roads and the scenery viewed therefrom, plus its sandy beaches, and whatever else I’ll be reminded of as I sort through my many photos…

Now, for various historical reasons, it turns out that Africa is my least-traveled-to continent. Out of the 50+ countries I’ve visted, only 10 have been African (not including the Seychelles or Mauritius in the Indian Ocean, which technically are also African). What’s more, only four of those were business trips (with a spot of tourism on some); the rest were visited exclusively for a vacation.

My impressions of the African continent tend to coincide with those of the majority – especially as concerns the Sub-Sahara: poor, and in some places – unsafe. Astonishing nature and wildlife, but with poorly-developed governments. But when in May of last year (2019) I visited Rwanda, my impressions started to change. // Have a read of that link – it truly is an extraordinary, curious place. Rwanda is sometimes called the ‘African Switzerland’. It’s a most atypical country for this continent.

I’d heard a few things about Namibia before: about it’s natural beauty, and its, too, being something a bit special for Africa – a cut above its neighbors somehow. Well, having now been there myself, I can confirm this to be true. Namibia isn’t Africa as we tend to know it. At first, it felt like we were in Australia! The bluest sky, endless expanses, excellent roads, pretty houses and neatly mowed lawns. For example, as you drive through the Namibian coastal city of Swakopmund, it feels like you’re in a provincial Australian town/city like Katoomba or Warrnambool. 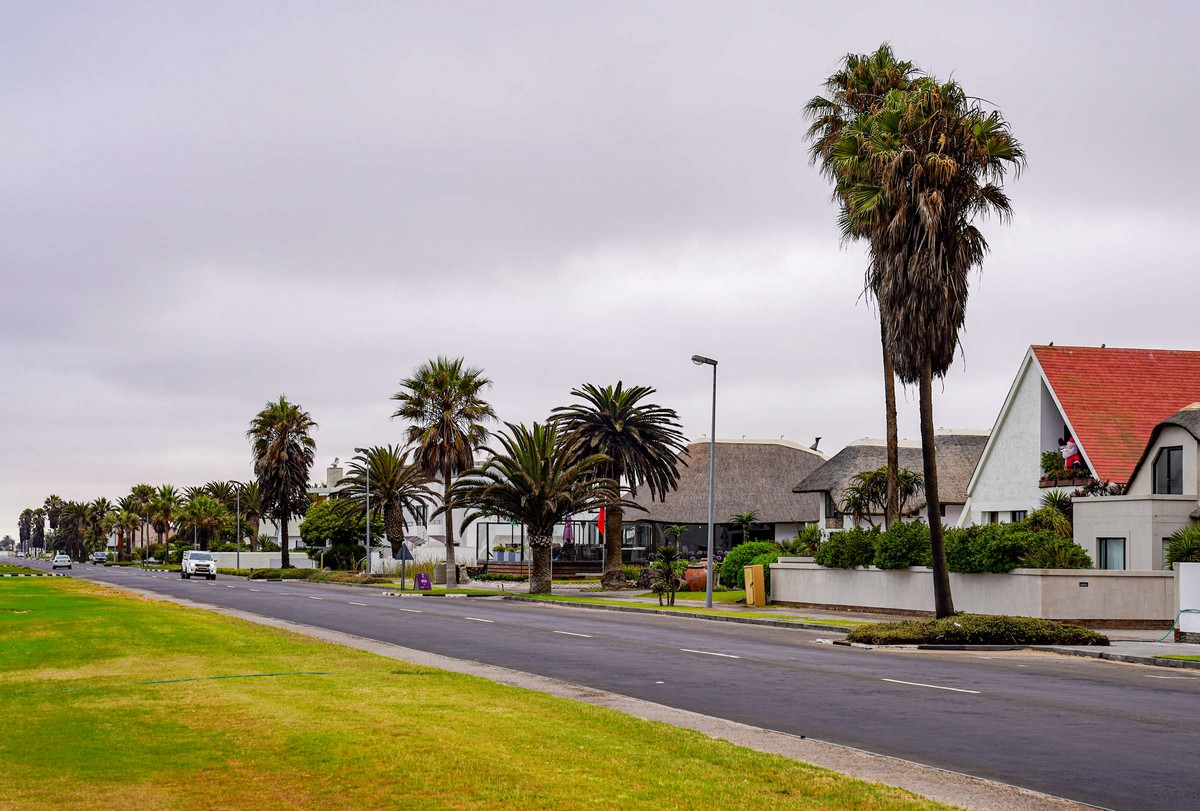 Oops – sorry folks: that’s not a pic of Swakopmund, but of Walvis Bay, just below it.

So, like, why is it that some countries – particularly Namibia – are clearly a lot better developed than the African average? To be sure, there’ll be a great many factors that go into answering that question, and I really don’t want to open that can or worms. However, I was made curious enough to have a quick look at some facts and figures regarding the economic landscape of the continent.

Quick caveat: I’m no economist, let alone an economist specializing in African economics. However, like for all of us, I have the internet at my fingertips, plus an analytical mind by training and profession! All the same – please don’t take this as some kind of scholarly treatise. It is, rather, merely the lay-speculations of a curious person!

Africa, both historically and geopolitically, is split into two parts: (i) north of the Sahara, and (ii) the Sahara itself plus all that’s south of it. Northern Africa is historically the territories along the Mediterranean, plus the short stretch facing the Atlantic – the countries that make up the Arab Maghreb Union, plus Egypt. You can dig deeper – further back into history, to the Roman Africa Proconsularis (btw: ‘Africa‘ comes from the Latin Afri; however, it has Phoenician roots); and yet further back – to the Phoenician period. Meanwhile the other part of the continent is known as Sub-Saharan Africa.

The north is traditionally more developed, richer; the south, logically – the opposite. That is – on the whole: for in the south there are two primary exceptions: Nigeria and South Africa. The former – the continent’s oil-rich ‘Texas’, and with a population of 200 million; the latter – historically a well-developed country with a strong economy (and not only based on gold and diamonds; industry too).

After Nigeria and South Africa come the following African countries in the GDP listing:

But those figures relate to gross domestic product – which rates the sizes of economies overall. But let’s look at the figures when a country’s ‘domestic product’ is divided by its population; i.e., GDP per capita. Here we see a less rosy (actually, less purple!) picture: no large African country is included in the top three ranges (colors) on the respective world map. 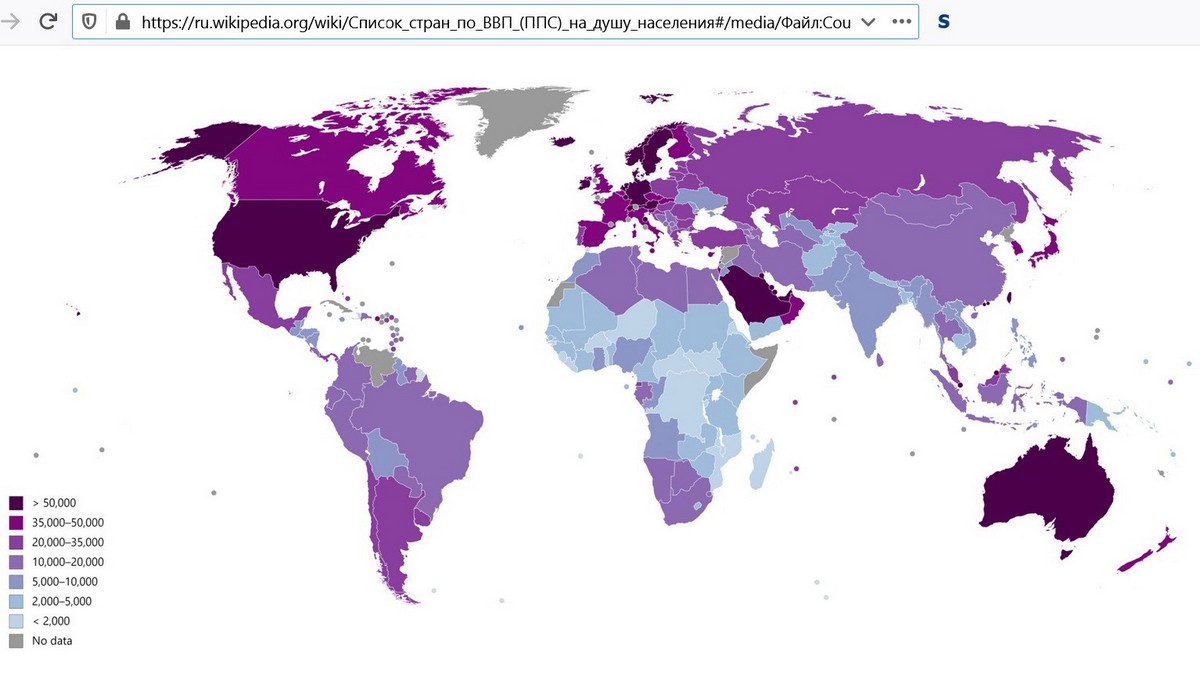 So, as we can see on the GDP-per-capita map, the richest countries of the continent are those along the northern coast, then a handful – South Africa, Eswatini (a rebranded Swaziland), Botswana and Namibia – down at the bottom. There are a few exceptions to the rule in mid-Africa: Equatorial Guinea and Gabon – both oil rich (the former – tiny). But all of them are either toward the end of the top-100 or the beginning of the next 100 in the world rating.

And this seems to be reflected in the situation on the ground in Africa. Although the airport you fly into may be real swish, modern and perhaps brand new, once you leave it things are quite different: poor, unkempt, unpleasant. And that’s if you’re lucky. If you aren’t – you shouldn’t even get out of the car you’re in at the traffic lights on your way to your hotel.

At least – that’s the norm I’ve become accustomed to. But then I arrive in Namibia. Beauty, palm trees, comfort, taking-it-easy, and mountains on the horizon with their peaks up in the clouds. It’s just not Africa!

// Btw:  if you want to look at different figures of countries’ populations, economies, and similar stats, I recommend not only the usual Wikipedia, but another resource – and a very curious one at that. It’s the CIA World Factbook. Yes – CIA as in Central Intelligence Agency of the U.S.A.! All sorts of interesting statistical data are to be found there, including on geography, economics, energy and transportation, and a whole lot more. Check it!

But that’s enough about what’s ‘on paper’. We were here, ‘on the ground’, in person, in the flesh. And ahead of us were days and days of traveling-adventuring across unknown territory; our posse was tried-and-tested and certified as ‘never a dull moment’; our various devices were charged, carded up and batteried up; and our vehicles had a full tank of gas (actually – mine had two full tanks of gas, which could see it go 1200km without refueling! The other vehicle was a minivan; a fact they’d come to regret).

So. Here we were – in the capital of Namibia, Windhoek. We stopped by a supermarket to stock up on provisions, bought some local currency at a bureau de change, and already were thinking the place looked more like Australia than Africa! Alas – no photos, taken either by me or the others; and I really can’t explain why not. I think it was because our subconscious thought we were in Sydney, or maybe Dubai, so same subconscious didn’t bother encouraging us to get our cameras out. Shame; as Windhoek is a beauty!

Aaanyway. We got into our cars, the locals helped us escape the city’s labyrinth of side streets onto the highway (no trivial task), and off we set. And straight away – another pleasant surprise: the roads. They were practically perfect! I mean, as good as any Autobahn. But then – they should be: they’re even called Autobahns; the one we took – Autobahn A1! Here she is: 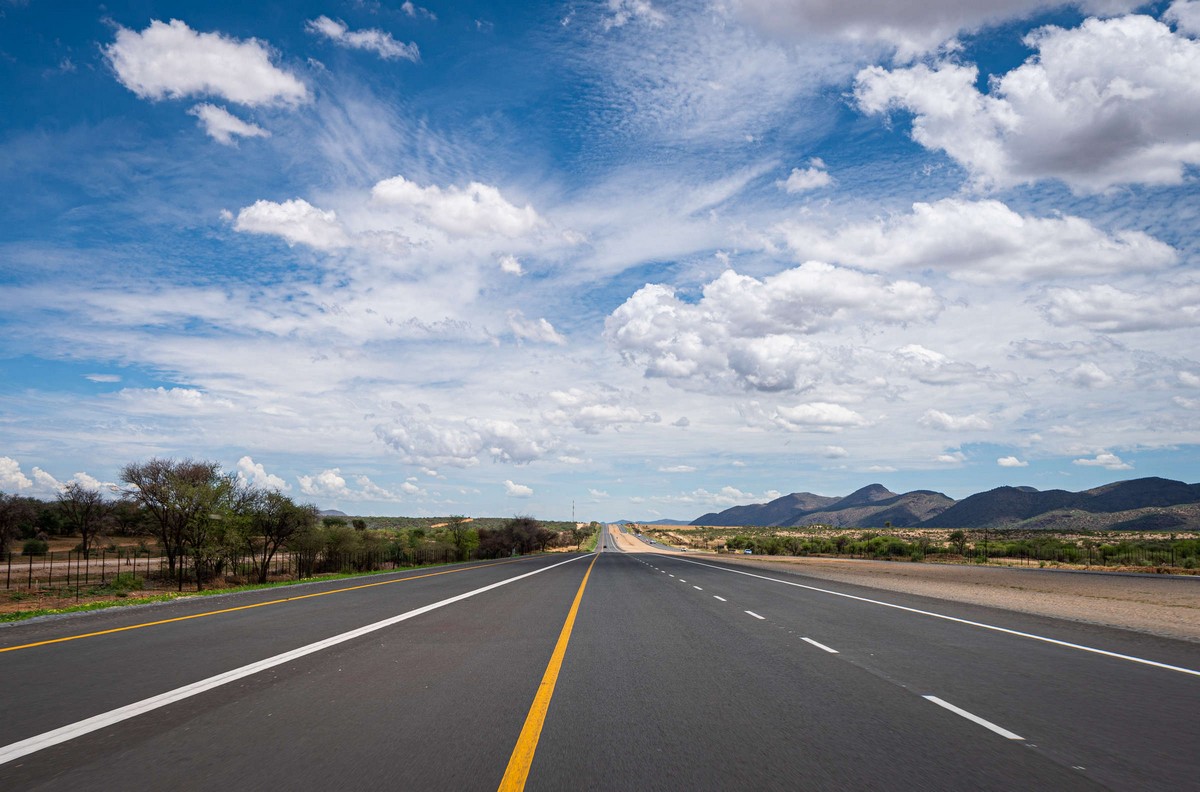 But just look at how smooth (and straight) it is. I wonder who built it? The Romans? ). No, perhaps the Germans? It is called an Autobahn. And when I look into the history of the country – low and behold: Deutschland figures large.

In fact the modern history of the country on the whole is rather fascinating. Take this from Wikipedia, for example:

“In 1883, a German trader, Adolf Lüderitz, bought Angra Pequena from the Nama chief Josef Frederiks II. The price he paid was 10,000 marks (ℳ) and 260 guns. He soon renamed the coastal area after himself, giving it the name Lüderitz. Believing that Britain was soon about to declare the whole area a protectorate, Lüderitz advised the German chancellor Otto von Bismarck to claim it. In 1884 Bismarck did so, thereby establishing German South West Africa as a colony (Deutsch-Südwestafrika in German).

A region, the Caprivi Strip, became a part of German South West Africa after the Heligoland-Zanzibar Treaty on 1 July 1890, between the United Kingdom and Germany. The Caprivi Strip in Namibia gave Germany access to the Zambezi River and thereby to German colonies in East Africa. In exchange for the island of Heligoland in the North Sea, Britain took control of the island of Zanzibar in East Africa.”

But enough of the unfairness of the colonial past. Back to today. And to our ride, btw: 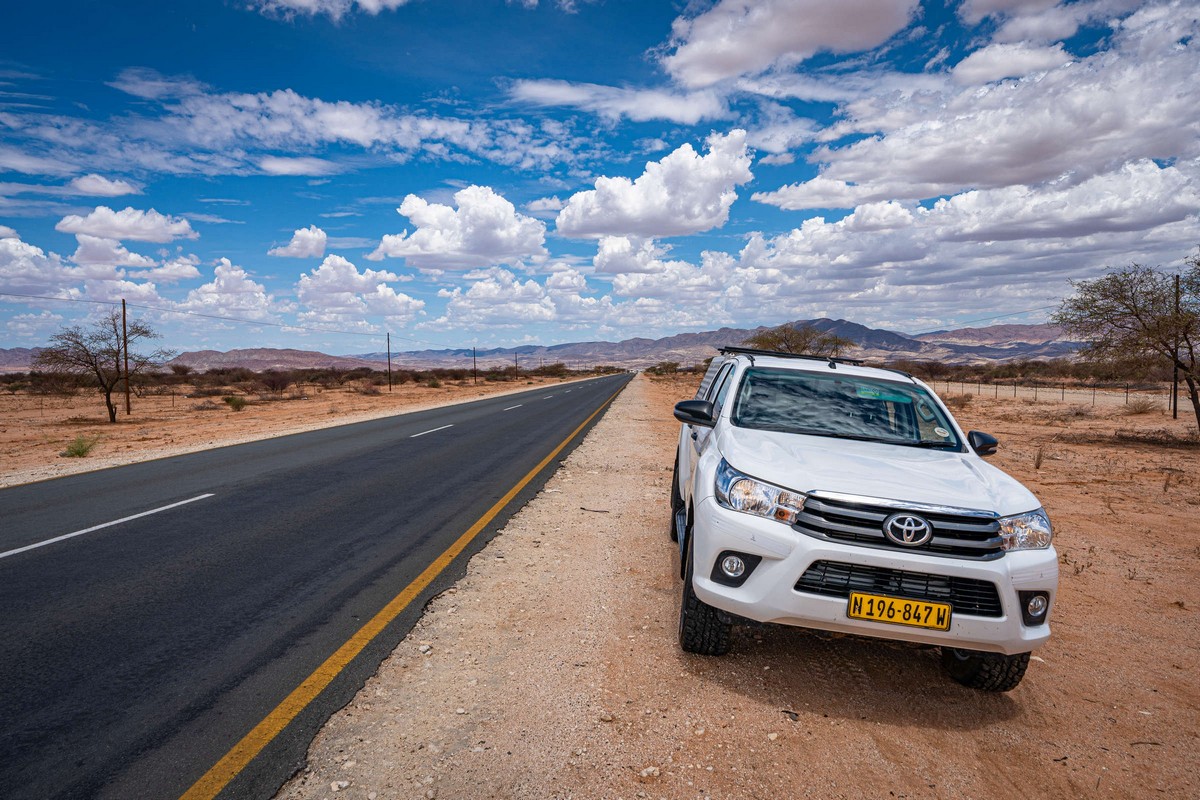 Another btw: the clouds and the blue skies therein – no Photoshop used thereon whatsoever. Really! So breathtaking were they that at first we kept having to stop the cars. To pass up on a chance of taking a digital photographic record of them would have been criminal!

At one point we hit the coast – almost literally. Goodness – that’s the Atlantic Ocean. Hard to think it’s the same ocean that borders the UK and Scandinavia!! 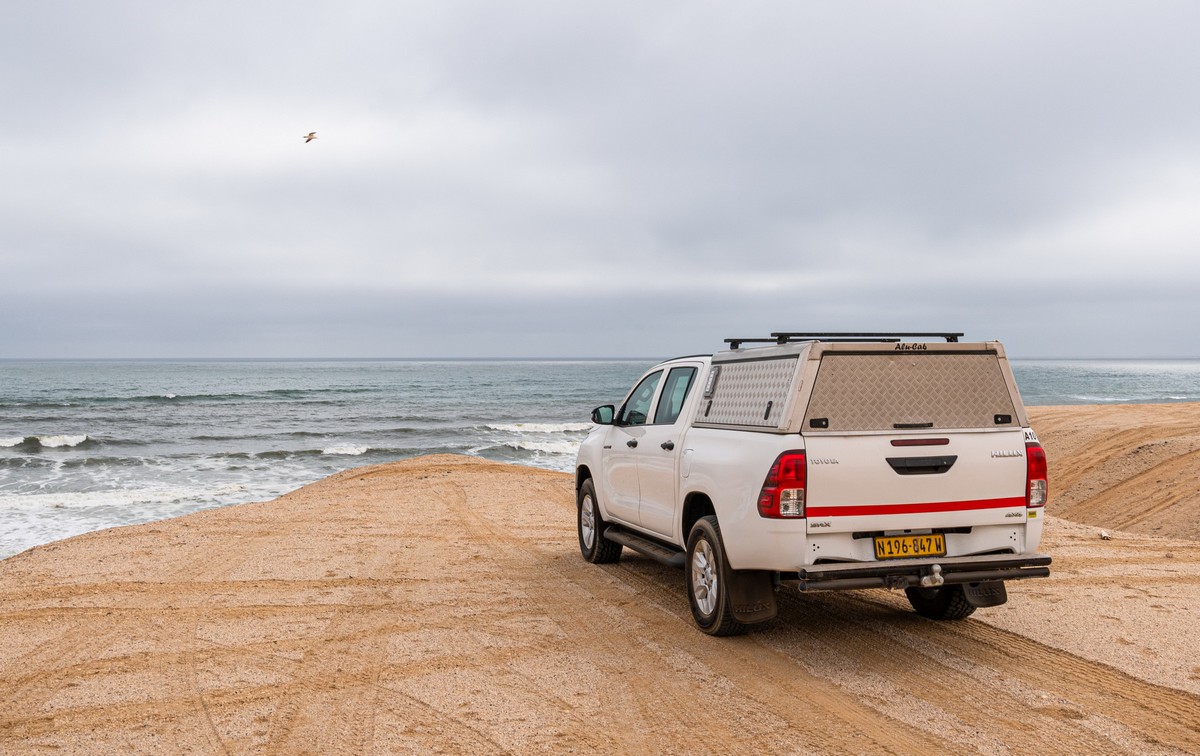 It wasn’t the only time we came up close and personal with the Atlantic. And each time – hypnotic was the experience. Just staring at the sea, listening to it, walking along its shore. Magical!

We could have got nearer the ocean, but why risk it? Others clearly had risked it: the sand down there was all compressed by vehicles…

You might have thought the sea would be warm, but you’d be wrong. This isn’t the Med, even if it is at this tropical latitude. 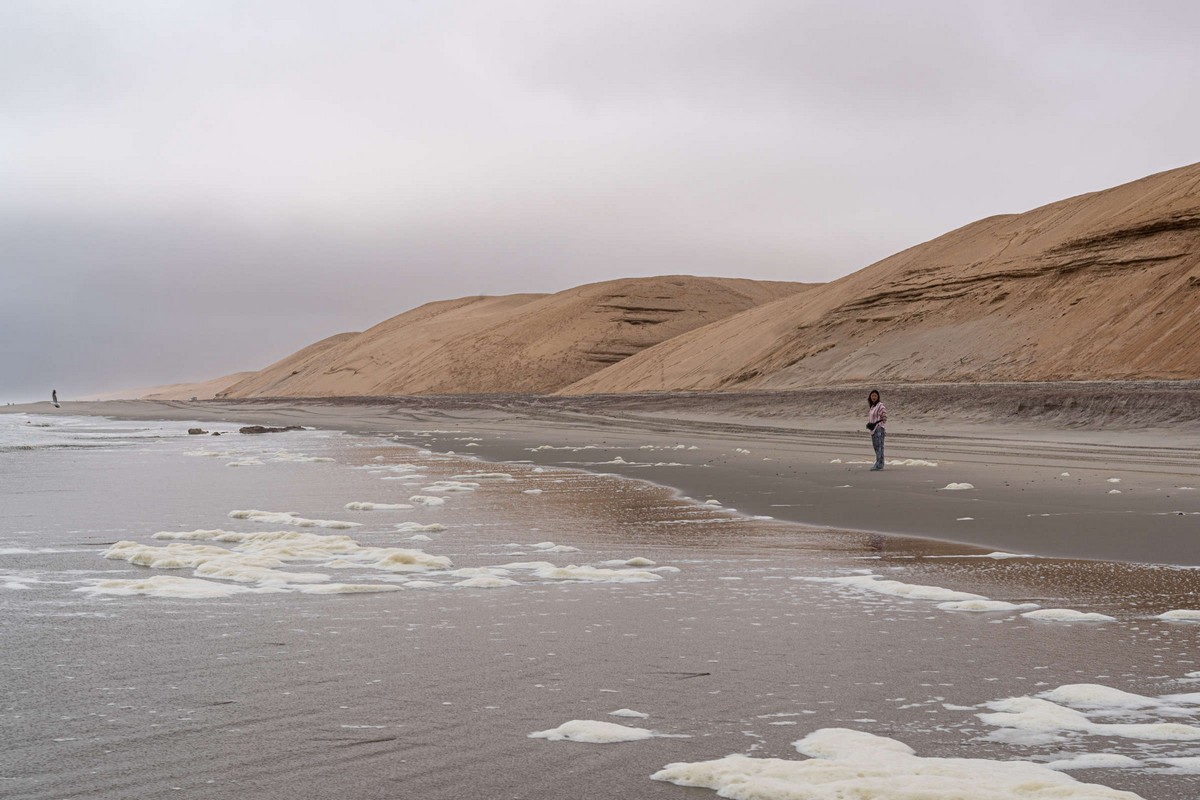 It was here I noticed something strange about the sand. That of the dunes was reddish; that on the beach – gray, and somewhere in the middle – purple. 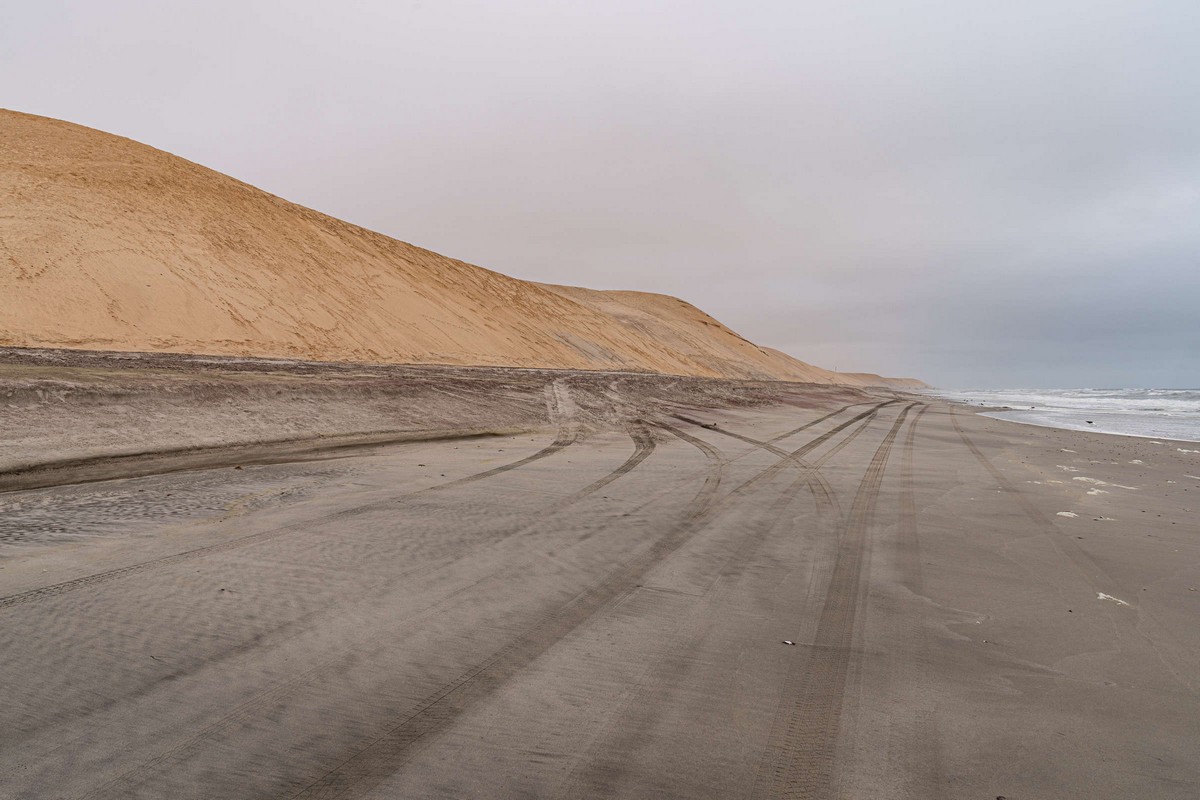 I realized then we were in a fantastical place. Some kinda magical country. But at the same time we decided to get the heck out there asap…

So we did just that: off we sped…

The next morning we were met by these here ominous-looking gates. That was after spending the night at Cape Cross Lodge, by the way – a very cozy hotel in the middle of nowhere.

See that… installation under the lady travelers there? It’s a genuine Atlantic whale’s skull! 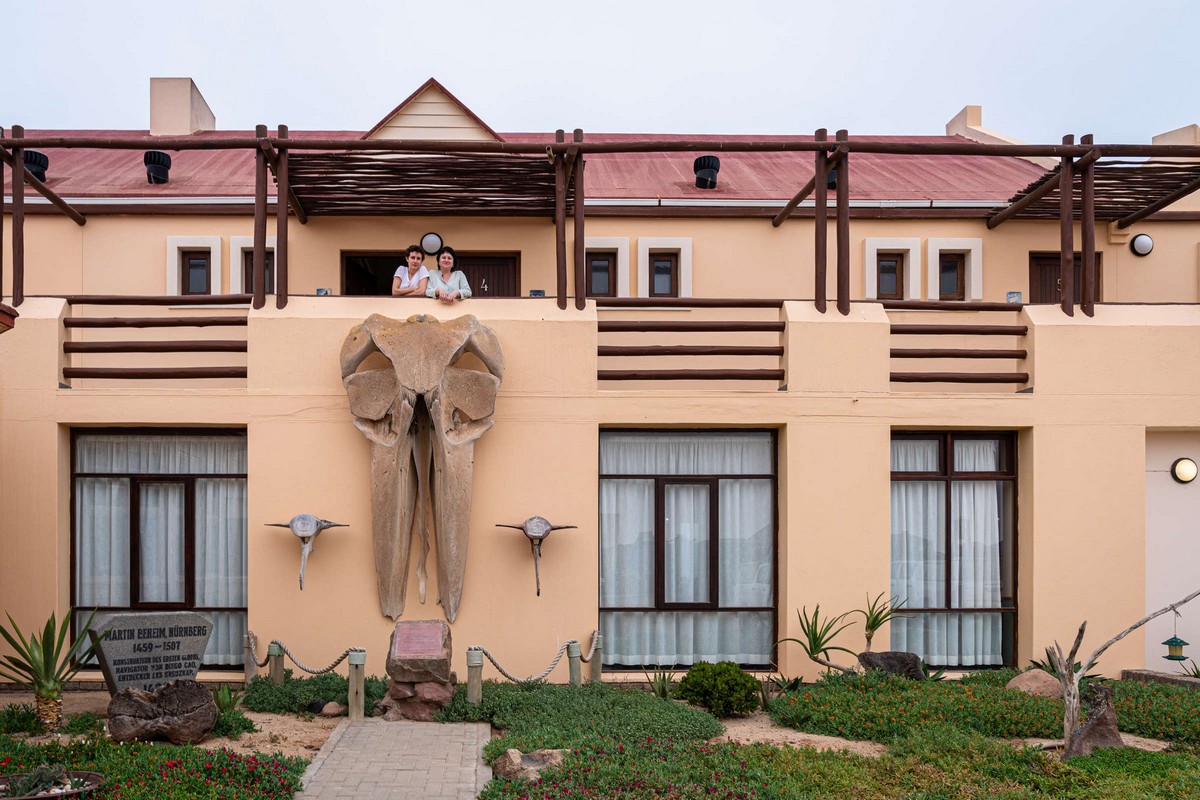 Our route for this first day of our African adventure was as follows: 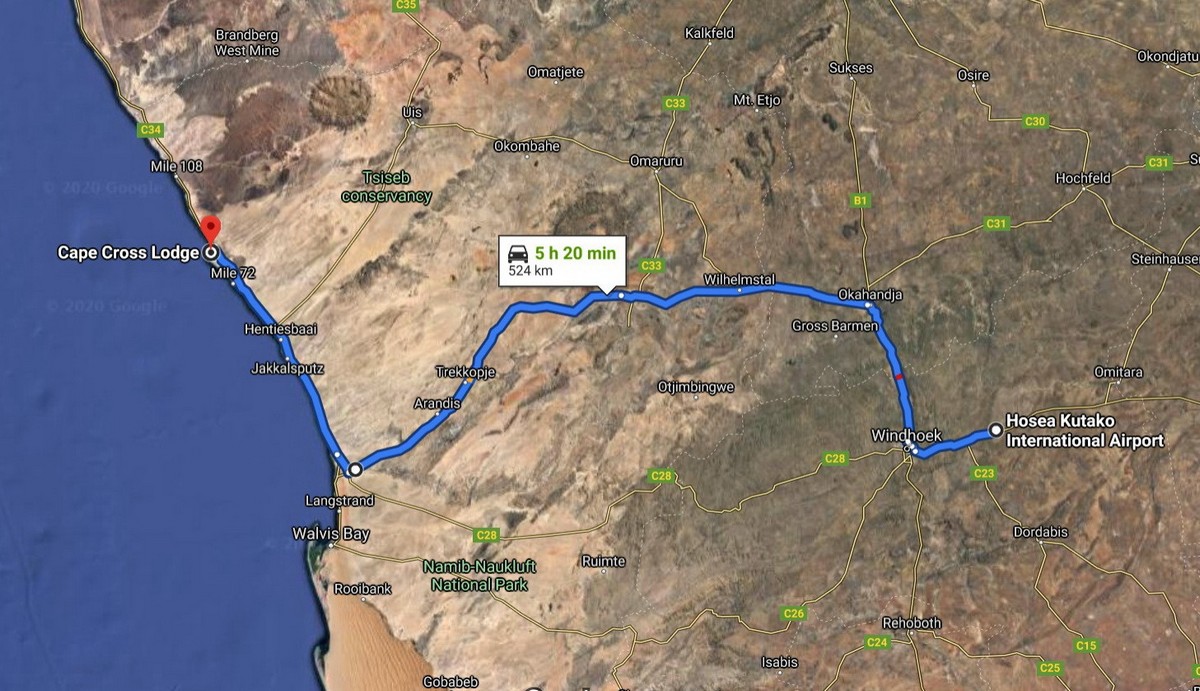 We should have taken this shorter route, but we were too busy gassing and we missed the turning! -> 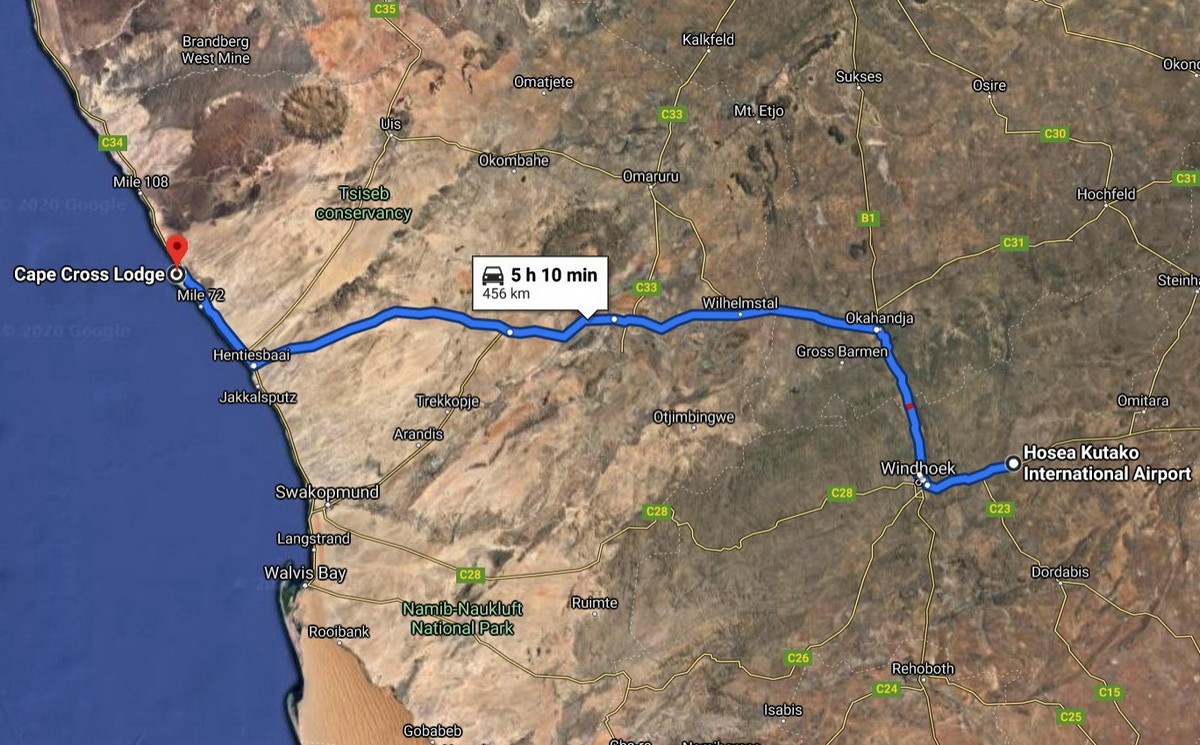 That’s all for today folks. But the African Adventure will be continued shortly…

All the photos from Namibia are here.