Now, if ever you’re in Lebanon, whatever you do don’t miss out Jeita Grotto, which is just 15 minutes outside Beirut in a car. It’s title is in the singular, but the grotto actually refers to a ‘system’ of two separate (though interconnected) karstic limestone caves. The upper one is mostly dry and gigantic; the lower one features a river, is generally smaller in size, but it’s length is a full seven kilometers (!), which is five kilometers longer than the upper cave.

Since the caves were found only relatively recently (lower – ~200 years ago; upper – 60 years ago), they’re in pretty good shape. What I mean is – Homo sapiens hasn’t had time to damage or destroy them, graffiti them, and in other ways make a mess of them. Another reason could be that they were accessible only by boat on the river that runs through the lower cave. Later, they dug a tunnel that connects the lower with the upper: 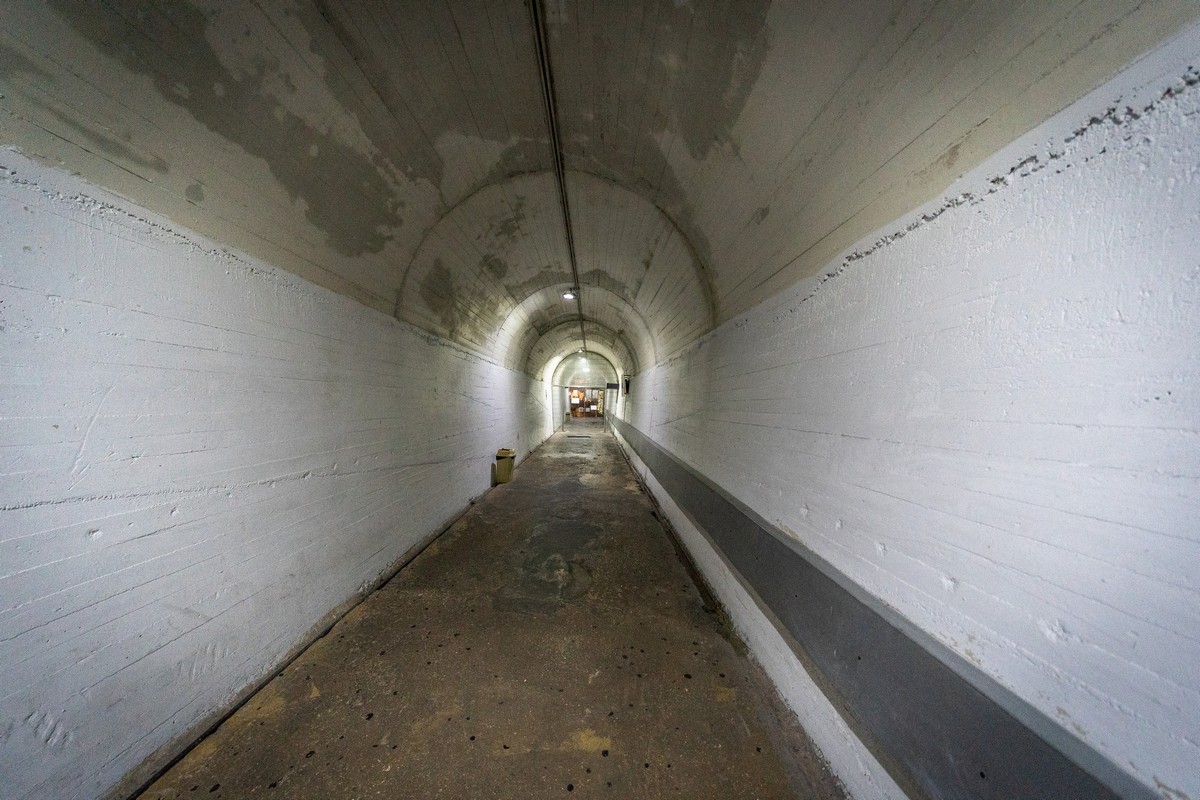 In we go… Oh my gigantic! I wasn’t expecting them to be this massive. Ginormous caves (the height of the biggest – 120m!); stalactites and stalagmites; and nicely illuminated with multicolored lighting. All they need is the addition of piped background music (and then Wi-Fi!) and they’ll be up there with the other most-tourist-friendly caves (like the Jenolan Caves in Australia, which I visited in 2010 – before this blog got off the ground, so no pics).

Stalactites hang down; stalagmites – push up. You know how to remember which is which? Stalactites have to hold tight tite! 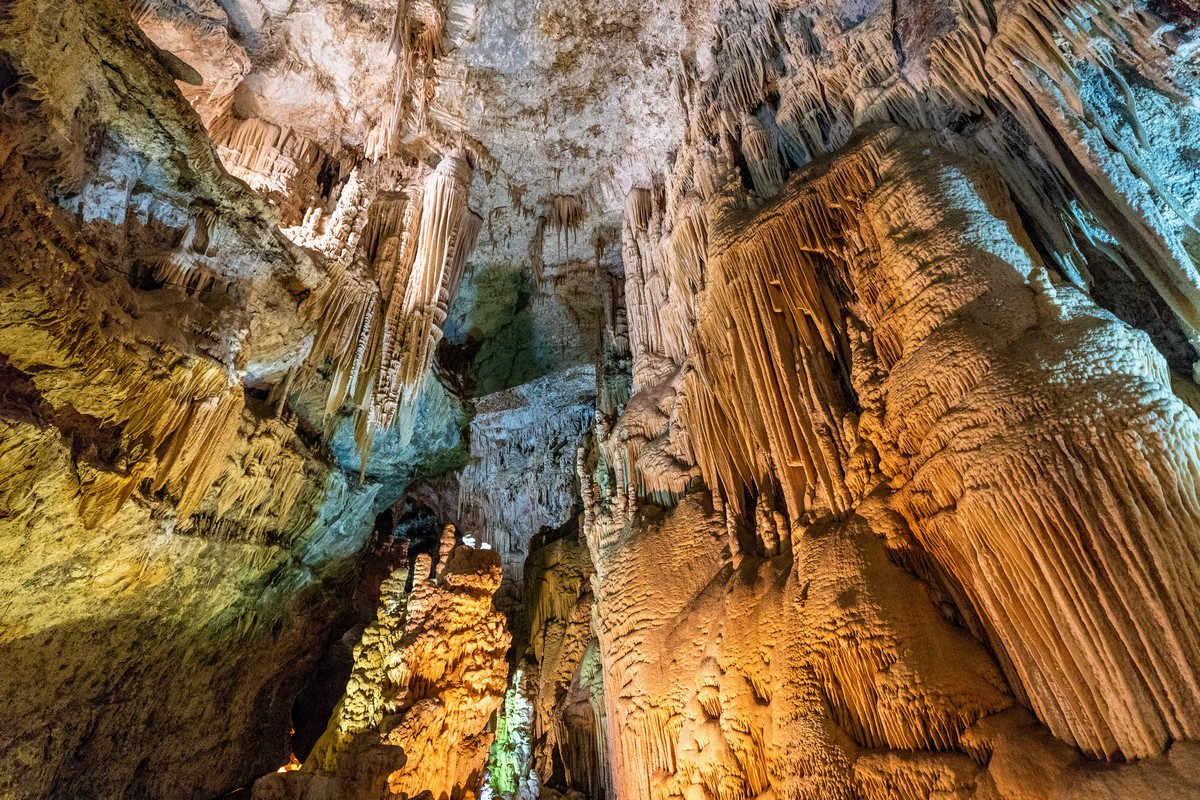 That there huge rock split off from the roof of the cave many eons ago: 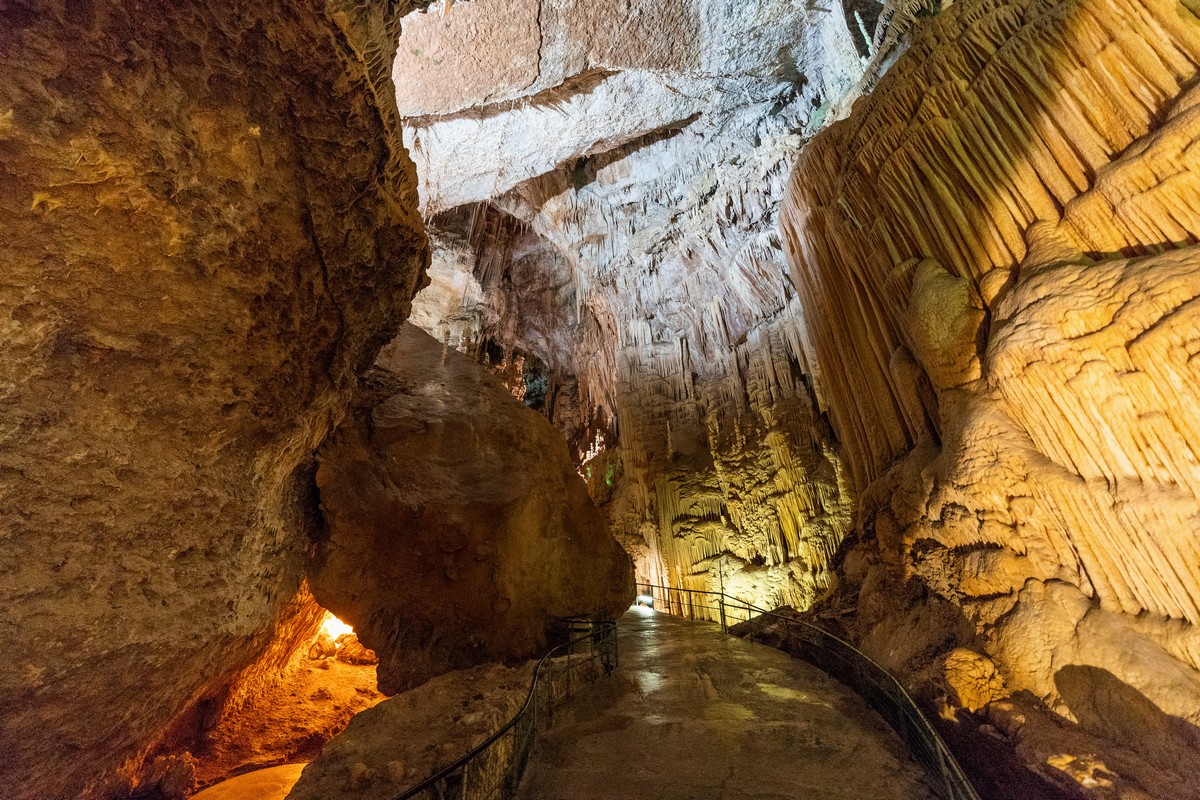 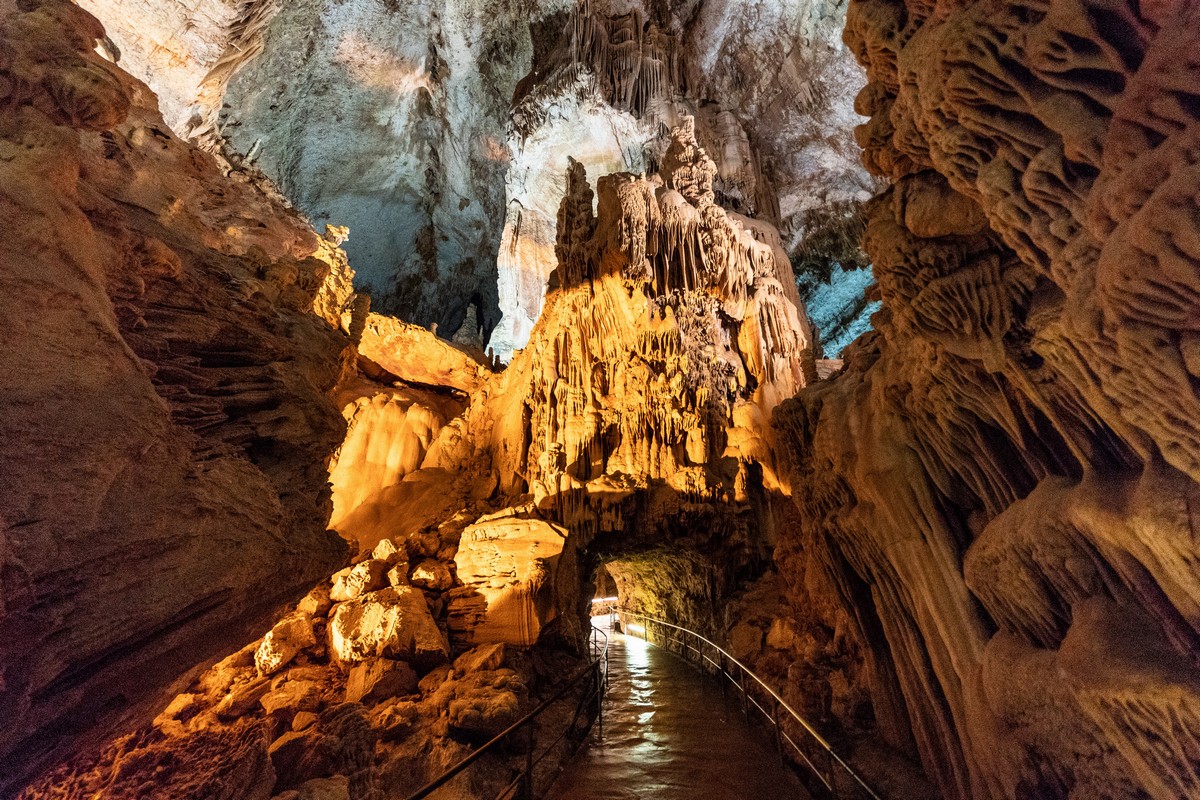 And where needed – they dug tunnels:

Into a different ‘hall’ – redder colors; huge jellyfish and toadstools hang down!

The concrete path was just great – especially when it hangs over a deep drop:

The length of the upper cave is 2+km, but tourists are only allowed into the first 700m. But that’s plenty ). 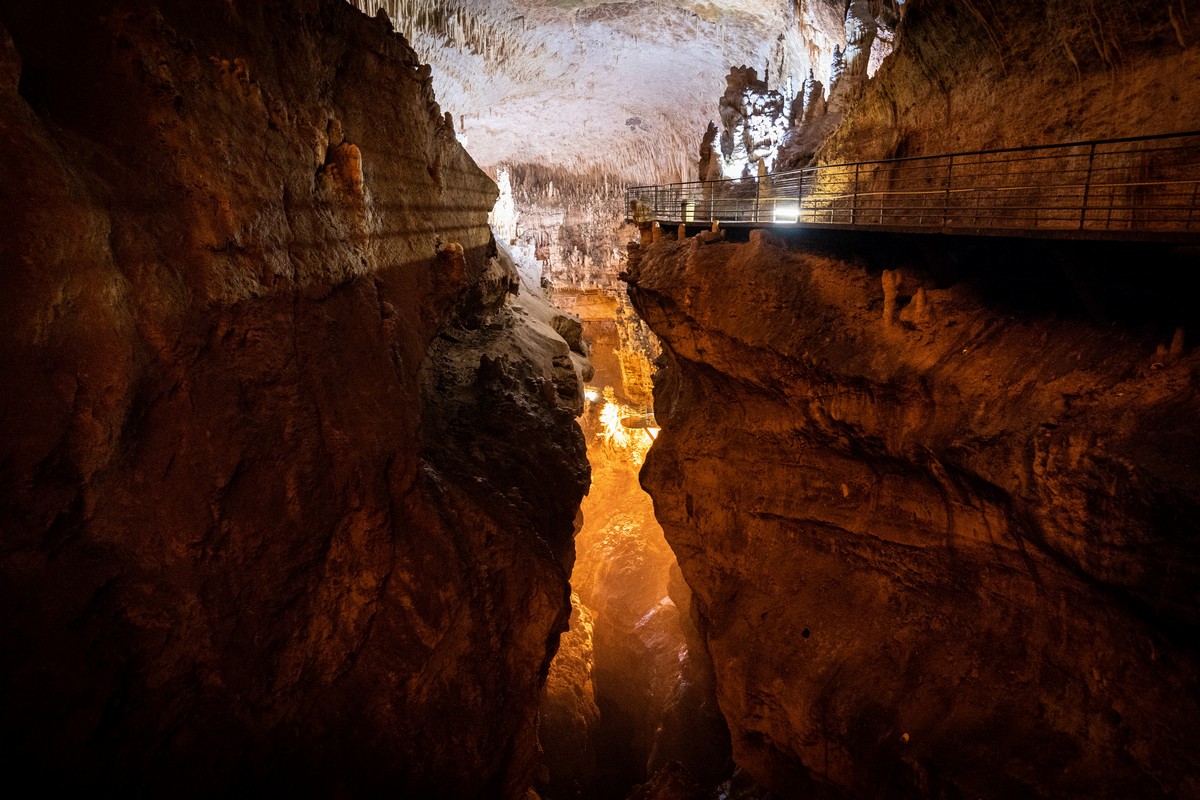 This is the furthest you can go: 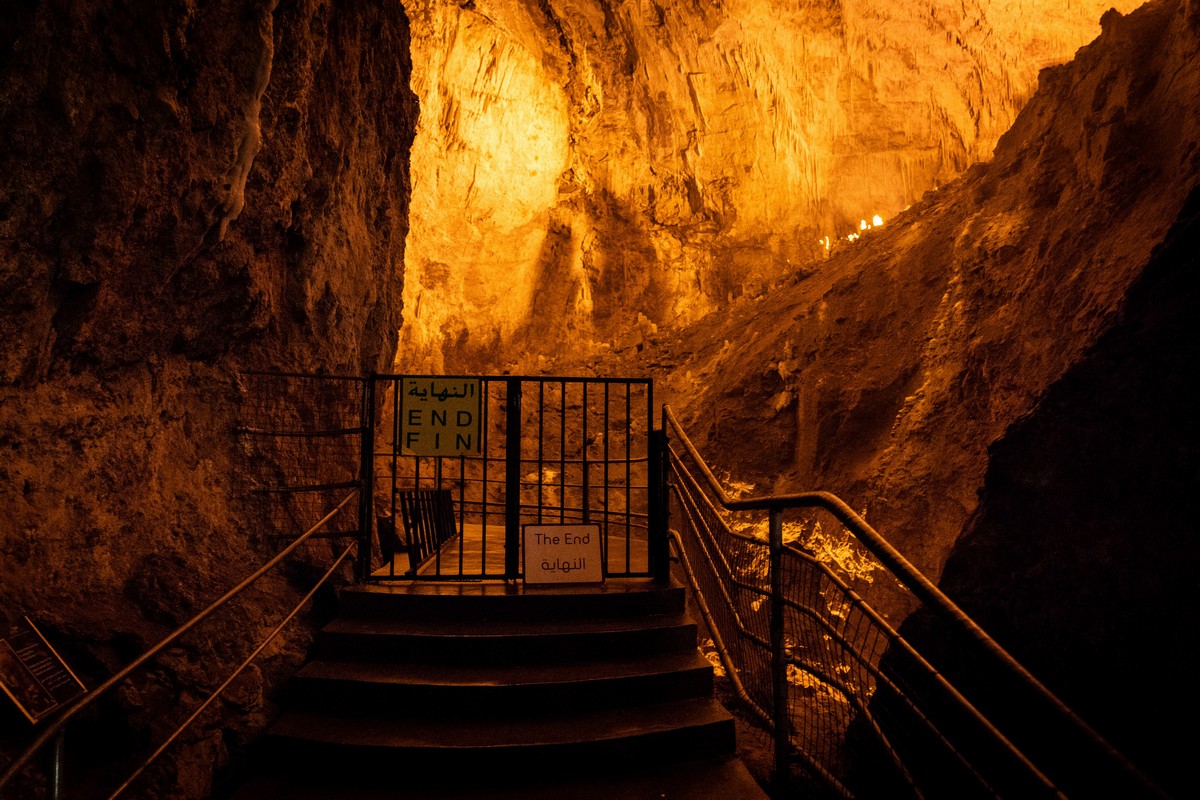 So we about-turn and head back…

The director of the grotto is Dr. Nabil Haddad, and it’s thanks to him and his team that this place is so marvelous and visitor-friendly. A big separate thank-you to him for the exclusive excursion! 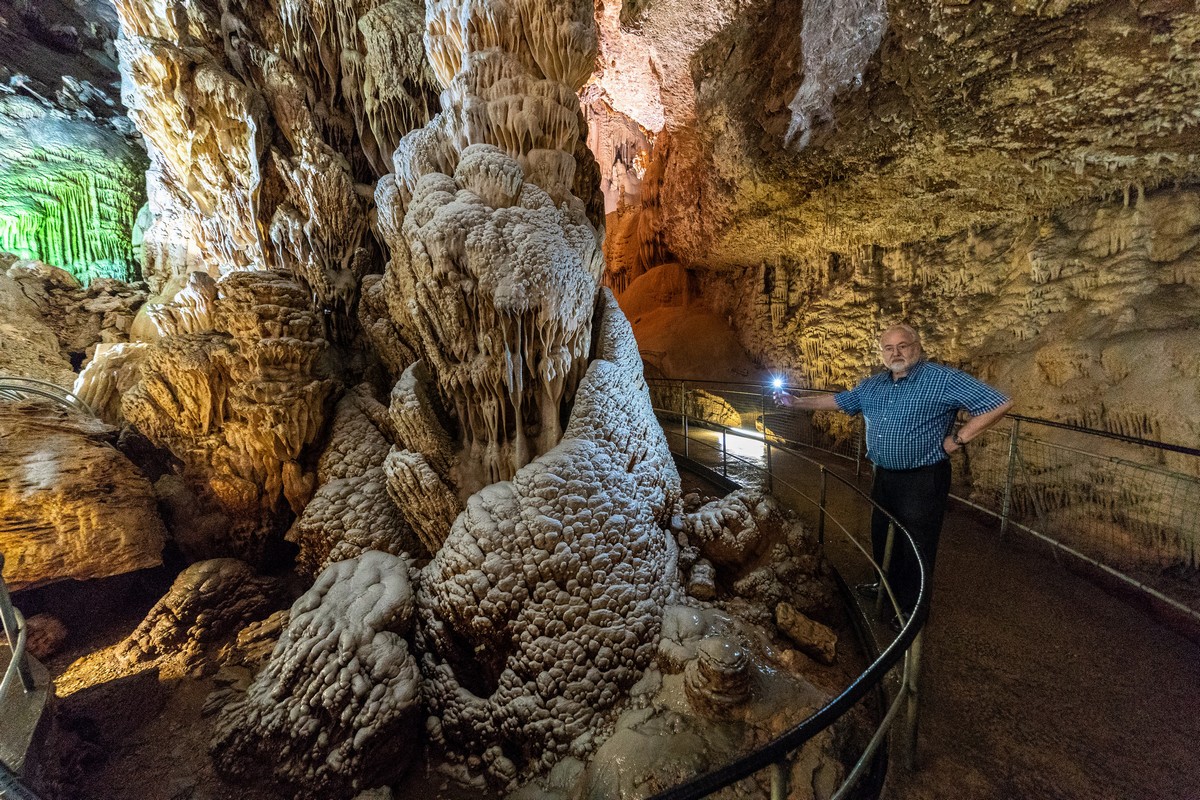 Curious fact: during the civil war (1975-1990) there were zero tourists visiting. Instead it was used as an arms depot, and generally became rather run-down. Only in 1993 did Dr. Haddad’s company Mapas take it under its wing and start restoring it – installing the paths, lighting, cable-car and other infrastructure, and researching the grotto.

As far as I understood, Dr. Huddad is the only investor in the grotto and puts his own money into it. I don’t know how much he earns from the tourists, but it can’t be much – there aren’t all that many of them, and the ticket prices are very democratic. Btw: he told me how he installed public conveniences at Baalbek – again with his own money. Before that, tourists… well, yes… right among the ruins!

Meanwhile we continue our excursion:

Here’s a cross-section of a stalactite. So how long does it take for them to grow? Actually – very slowly – a few millimeters a year. It depends on how much sediment comes down from above, and here there’s not much of that. Accordingly these stalactites are thousands of years old. 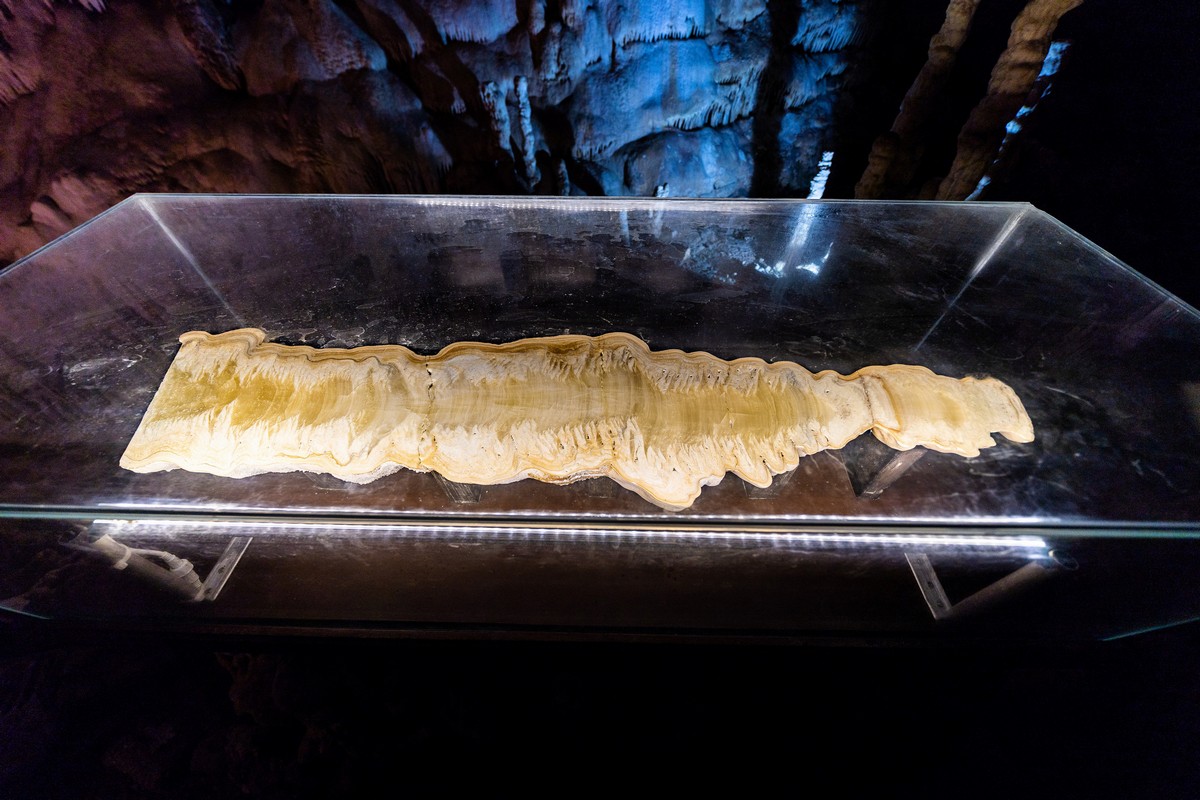 Meanwhile, we head outside – on our way to the lower cave. 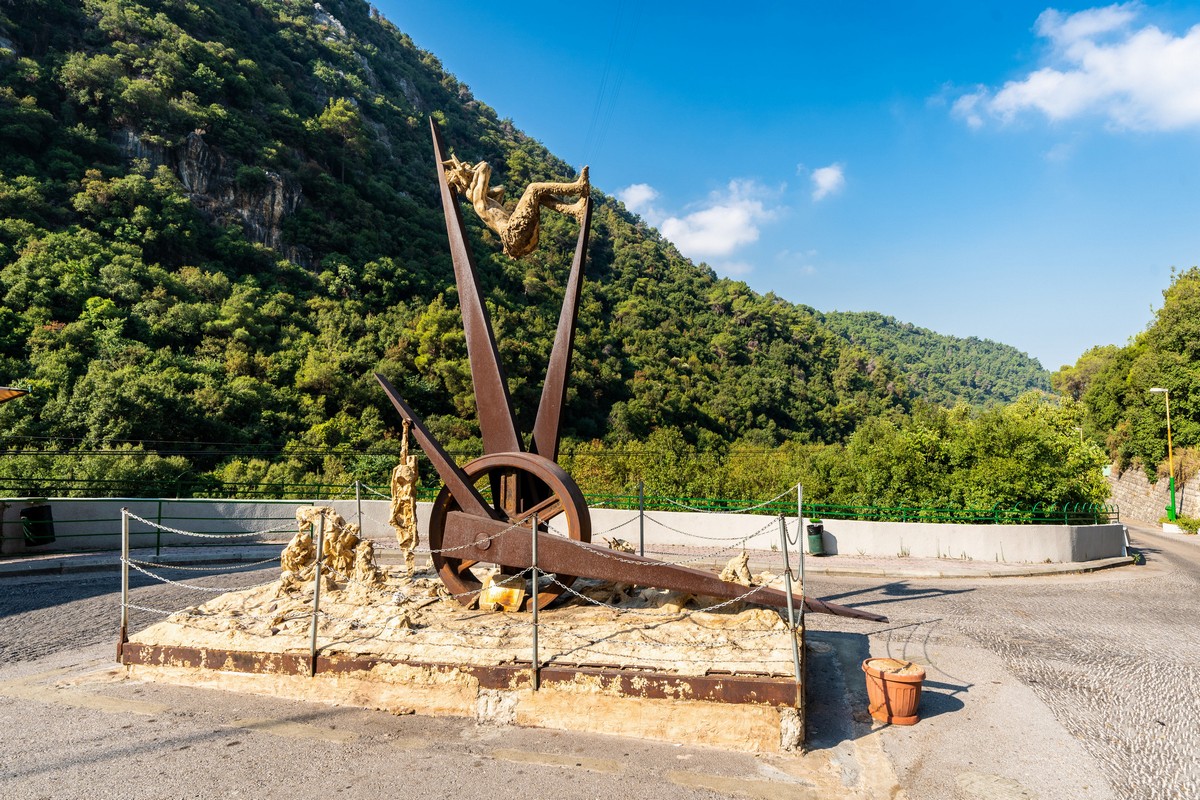 Here there’s a different story, different colors – plus this river, made up of the purist of water, used as drinking water in Beirut; accordingly – no tourists can go near the water.

Camel? This is starting to get delirious!… 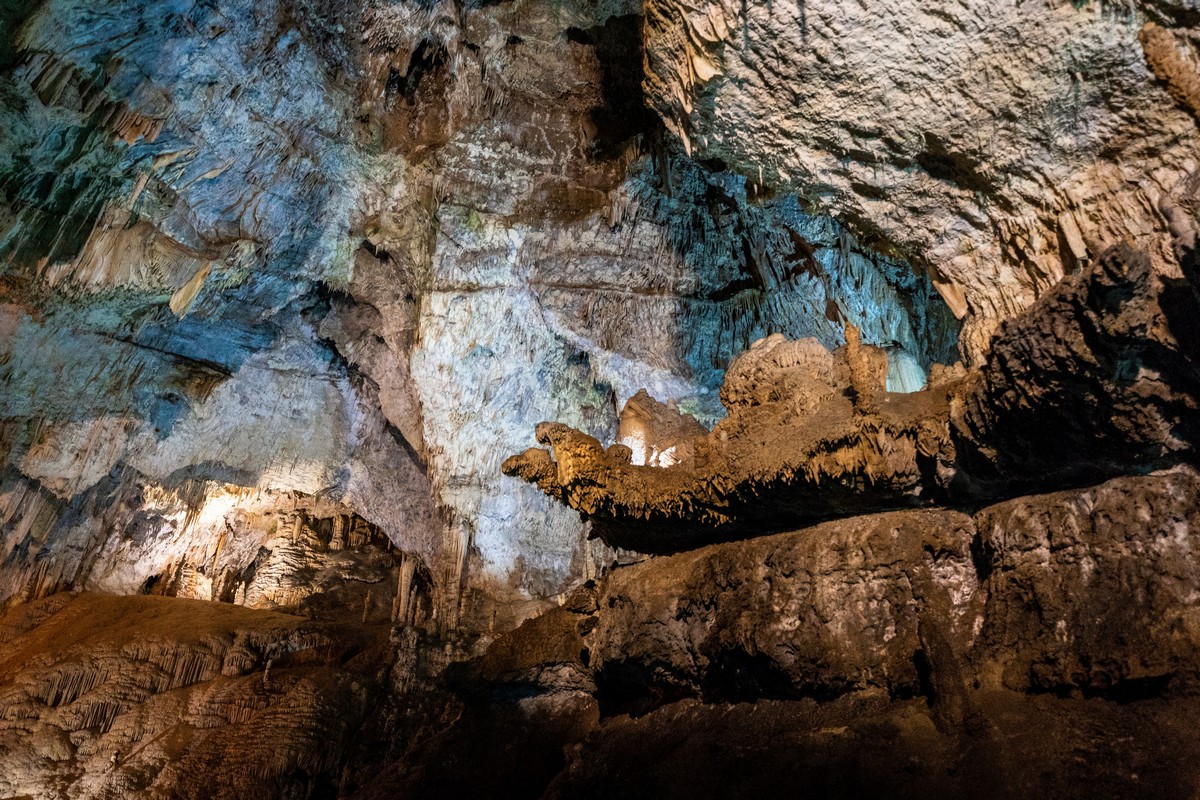 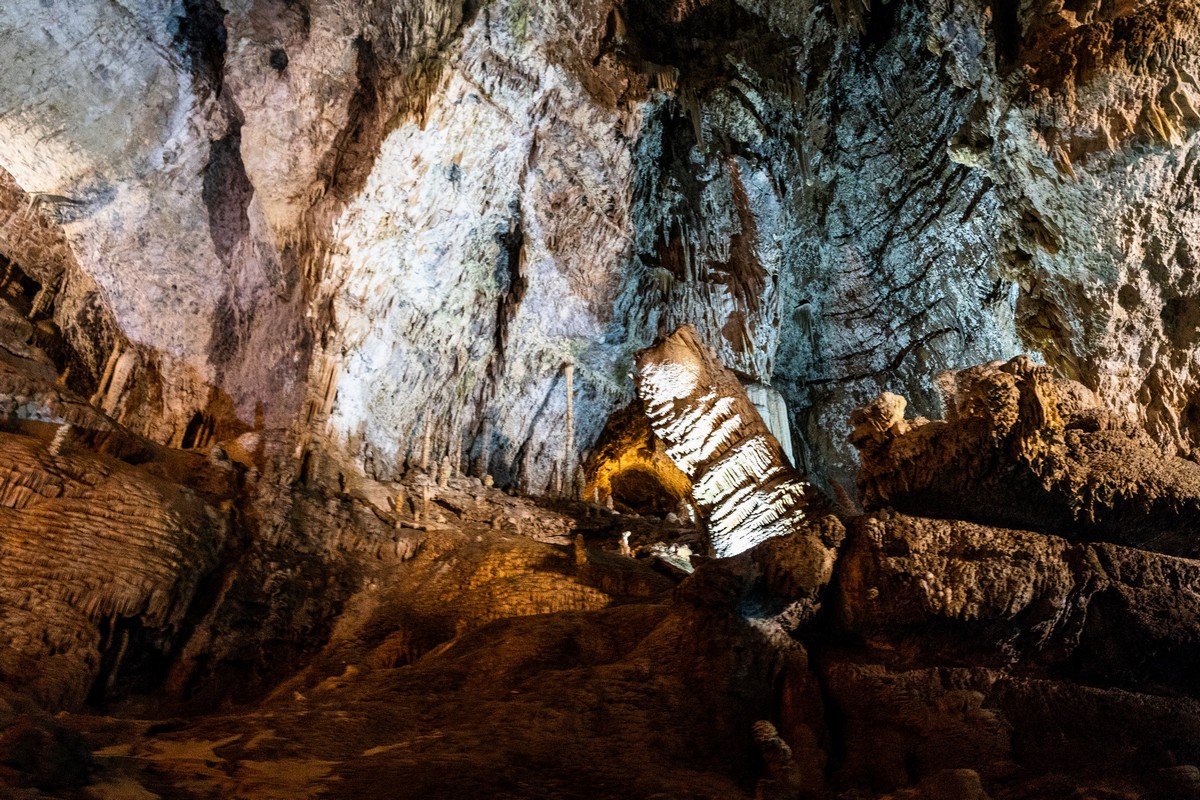 Woah – they have added music. Respect!

‘The end’ again. Time to head back… 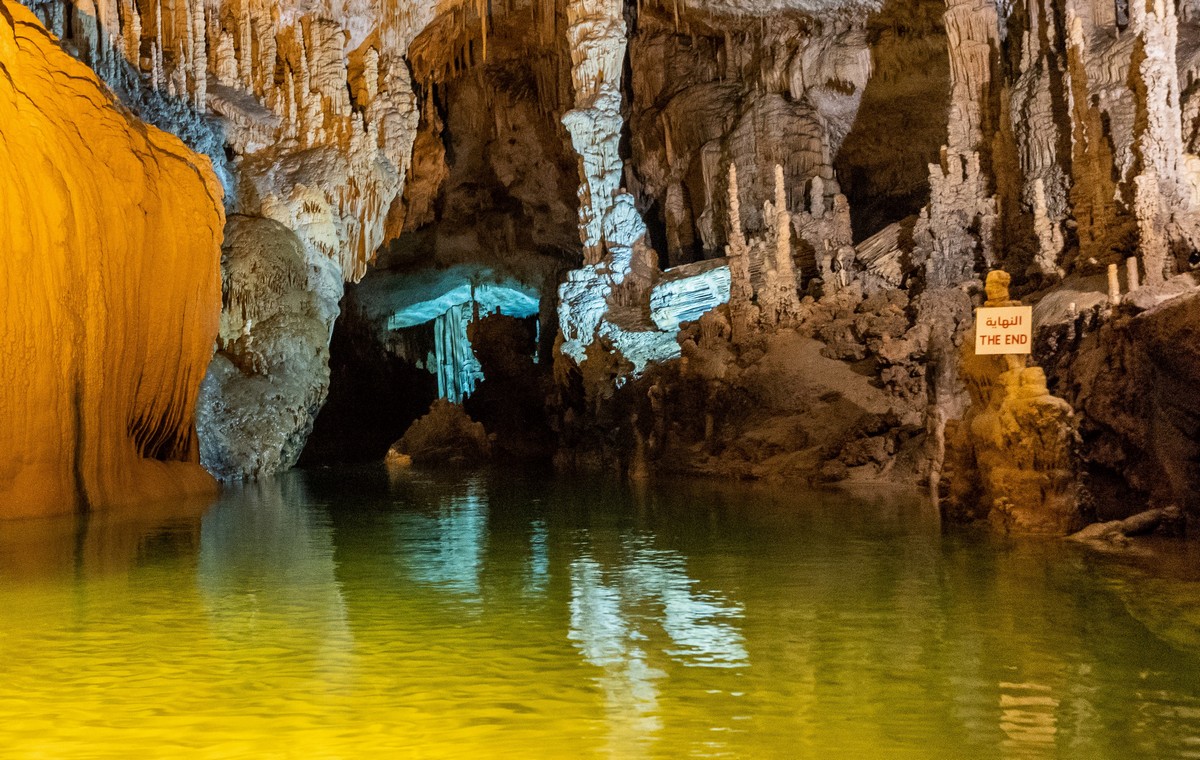 In all – a gorgeously grandiose and gigantic grotto. Must-see! Best in the morning – before most of the tourists turn up…

One downside: no photography allowed. Strictly enforced too. 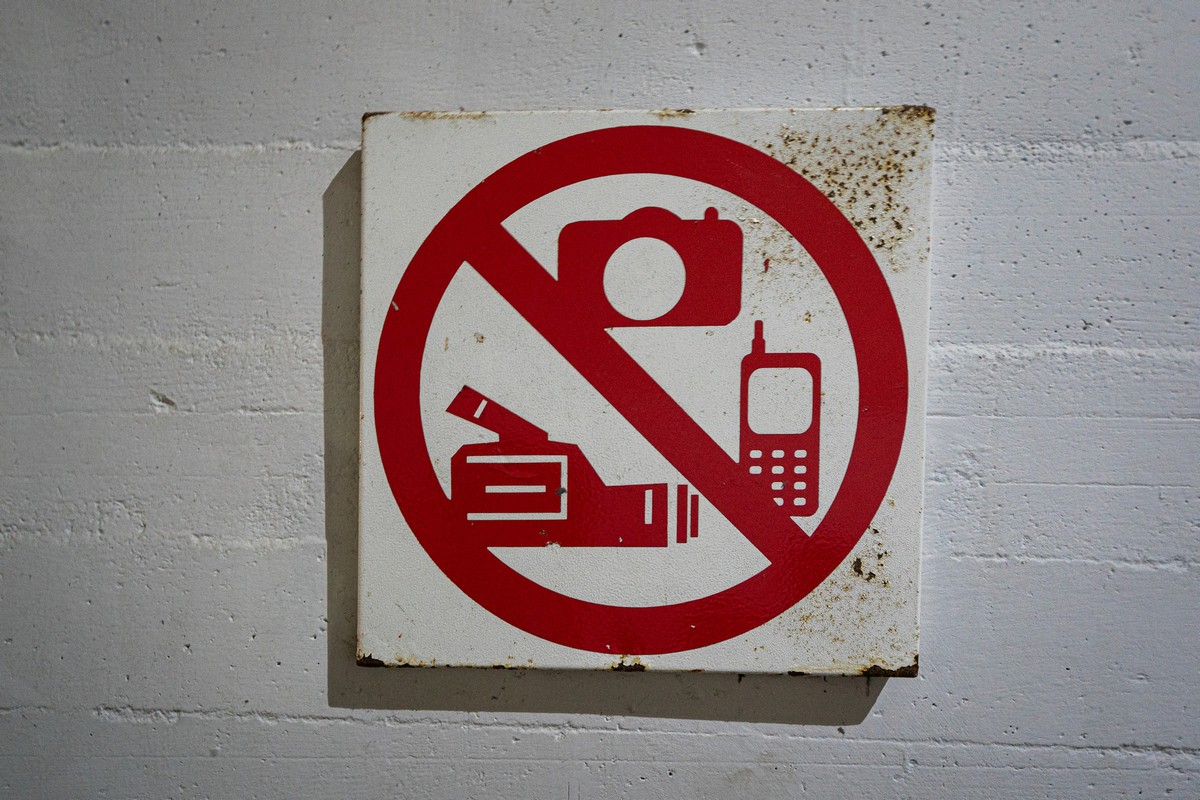 It’s a mystery why no pics allowed. They don’t monetize photography by taking their own pics and selling you them, or fining naughty photographers. So why, then?!

But – like, how did I take my pics and vids then? Actually, we got permission – from the Ministry of Tourism! Quite how my K-folks managed that, I do not know. But thank-you guys!

And that, folks, is it from the grotto – and from Lebanon. Time to catch a plane and head east…

All the pics from Lebanon are here.

And here’s the official site of the grotto.