Baalbek, Lebanon: it’s likely you’ve heard of it; maybe you’ve been, maybe not. If not – here’s your primer. If been – as it’s such a special place, you’ll probably enjoy revisiting it, albeit virtually.

All righty. First things first – when planning a half-day (that should be sufficient) at Baalbek, make sure to take at least a liter of drinking water with you, slap on plenty of high-factor sun cream, and wear shorts and a t-shirt. Then get ready to take in a ton of information while strolling around this place. Ready? Right – off we go up these steps: 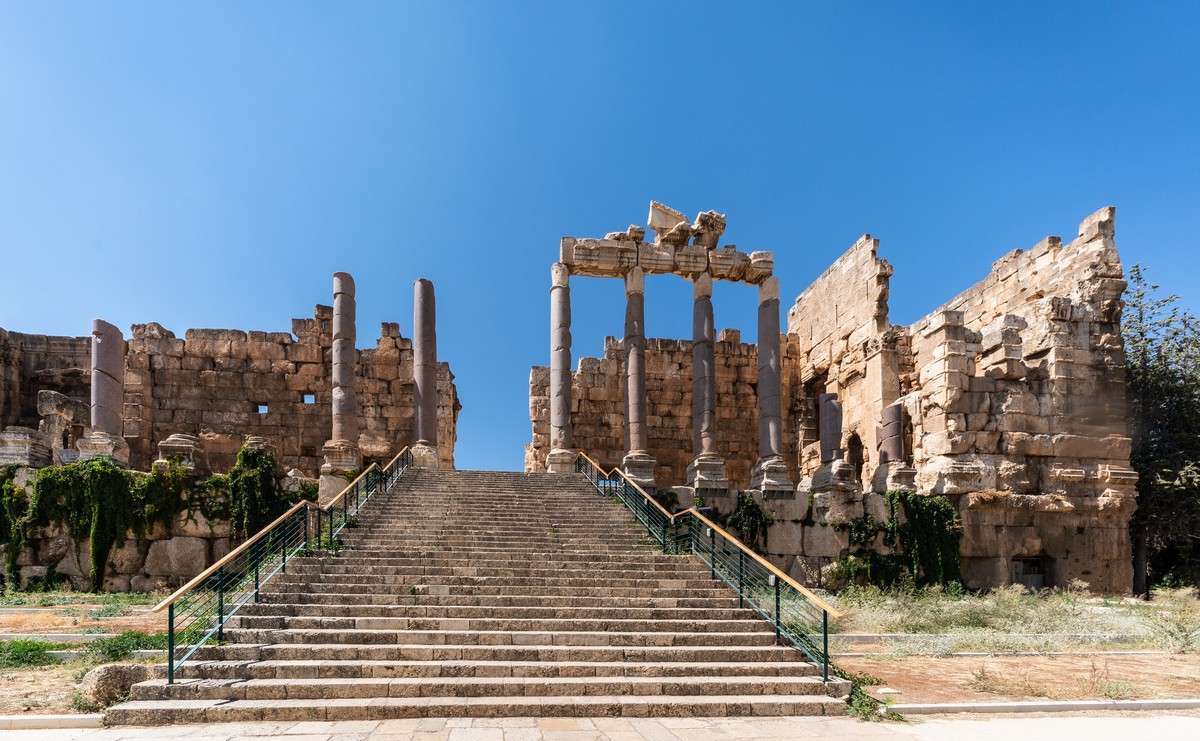 So, without further ado, let me tell you this. Actually, I’m simply paraphrasing what I was told by our guide, Olga (mostly confirmed by the internet).

So what about the several millennia before that? How can nothing be known about them? Such a massive, significant complex? There aren’t even any credible theories. In short: a historical mystery. A mysterious history!

First, man-made stone foundations were laid – still intact today. How many thousands of years old are they? And how did they transport the huge megaton stone slabs to the site? Another mystery.

But there’s a second story…

2. On the just-mentioned ancient foundations, the Romans built a temple complex. A colossal one too. You remember the Parthenon in Athens? Hardly small! Yet it is only a little bigger than the smaller temple here. Yes – you read that right: the ‘smaller temple’ is similar in size to the Parthenon!

And now from the very start. We begin our excursion of Baalbek…

The Baalbek temple complex starts with the entrance colonnade. After it, a hexagonal (!) courtyard, then the entrance to the main square. The ancient traveler would have been met by the heavenly view of the Jupiter temple (alas, today only six columns remain of the once mega-installation). Next – the temple for the worship of… historians still debate who. Bacchus (I don’t believe that, though we’re kindred spirits:)? Inanna? Aphrodite? Venus? Who knows for sure? No one. But enough of such conjecture. Time to move on to point three which, to me, is no less important than the first two…

3. So who built this gigantic complex – on the no-less-gigantic rock foundations laid millennia before? It’s quite obvious really – the Romans. Simply because these territories fell under the Roman Empire back around the first century.

3.1. So, the Romans built it. Ok. Then how do you explain the following?

The Roman Empire was many things, one of those things being a very bureaucratic state, in which every single sestertius was accounted for in the books. Thing is – there is zero mention of the not inconsiderable outlays on the construction of a certain Baalbek temple complex. Nihil omnino. So, what’s this – tax evasion (of the most brazen kind) – for the first century AD?!

That would be like, say, today, a tunnel being built from New York to L.A. – with no one seeing its construction, or accounting for the trillion or so dollars spent on it over several years!

Meanwhile, we continue our excursion of the grounds – across the hexagonal courtyard, toward the ‘smaller’ covered courtyard:

Over there stood the main temple – the Temple of Jupiter. 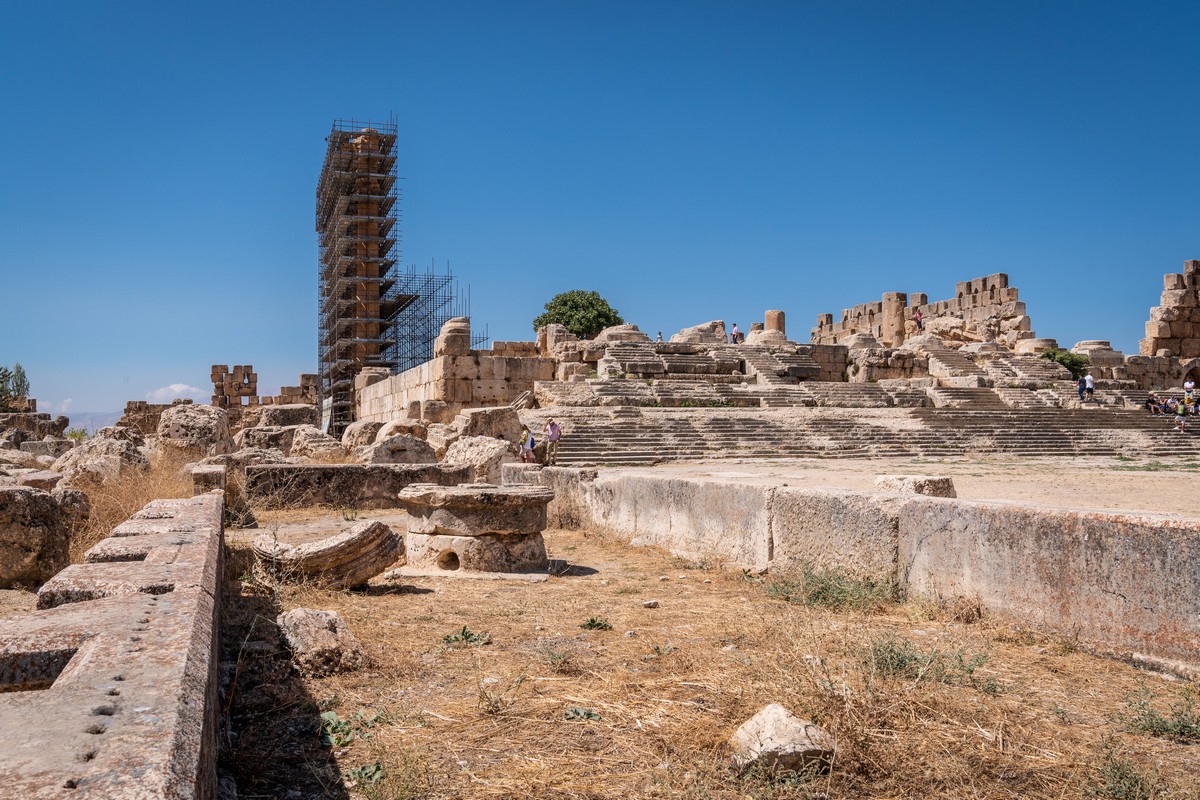 And here’s the smaller temple – called the Temple of Bacchus (though, as mentioned, it could have originally been dedicated to a different god). 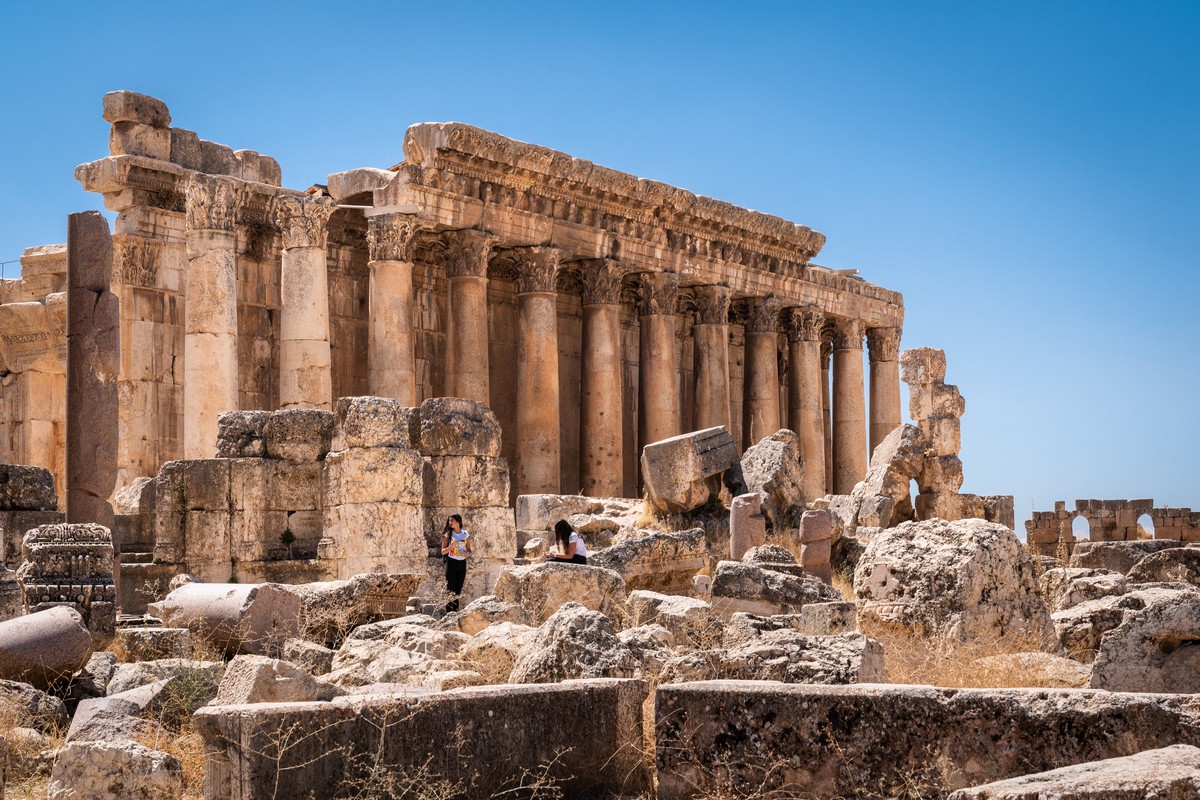 Granite columns – conspicuous among all the locally quarried sandstone. Probably imported from Egypt. The contract therefor, plus the logistics involved – also not mentioned in the ledgers. Such secrecy for something so big: incredible! 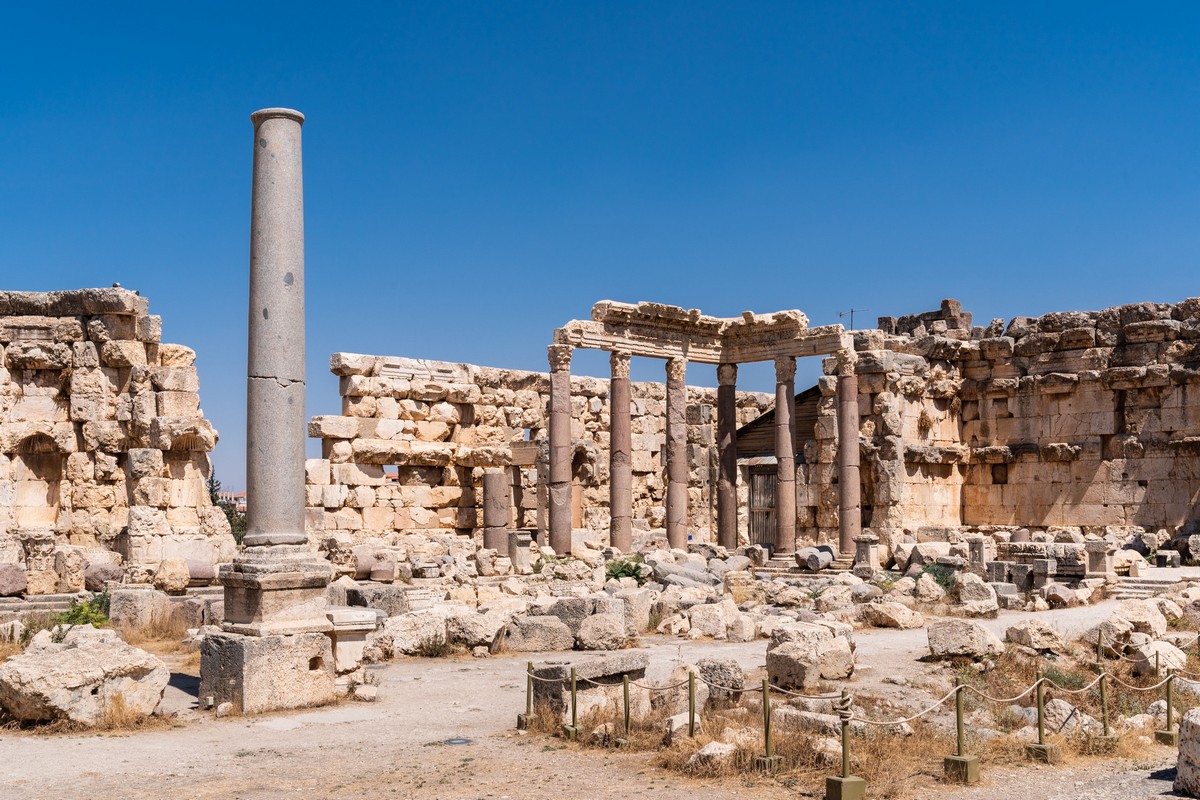 Check out the hand-chiseled stonework: 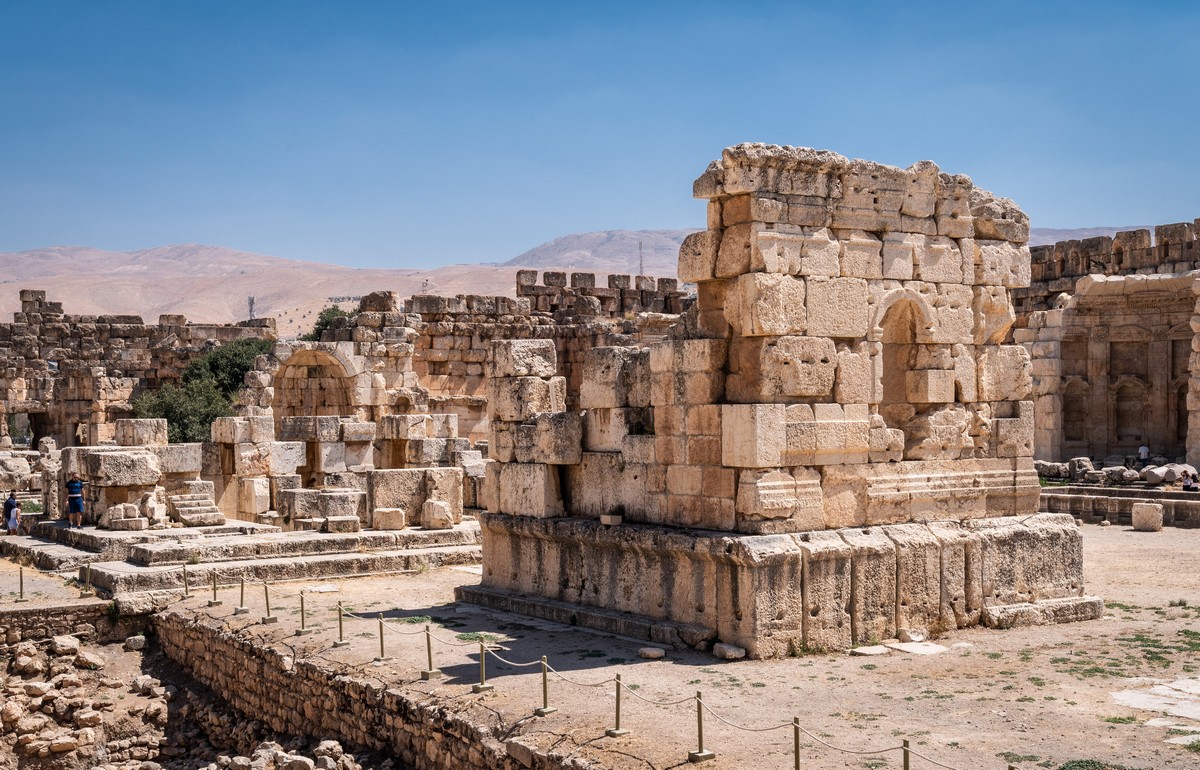 Of the Temple of Jupiter only six columns remain. Time, earthquakes, and other forces of nature have been taking their toll on the passionate advances of ancient civilizations. Btw: pictures of these columns form a few hundred years ago show there to be nine of them. Three collapsed since during earthquakes (. 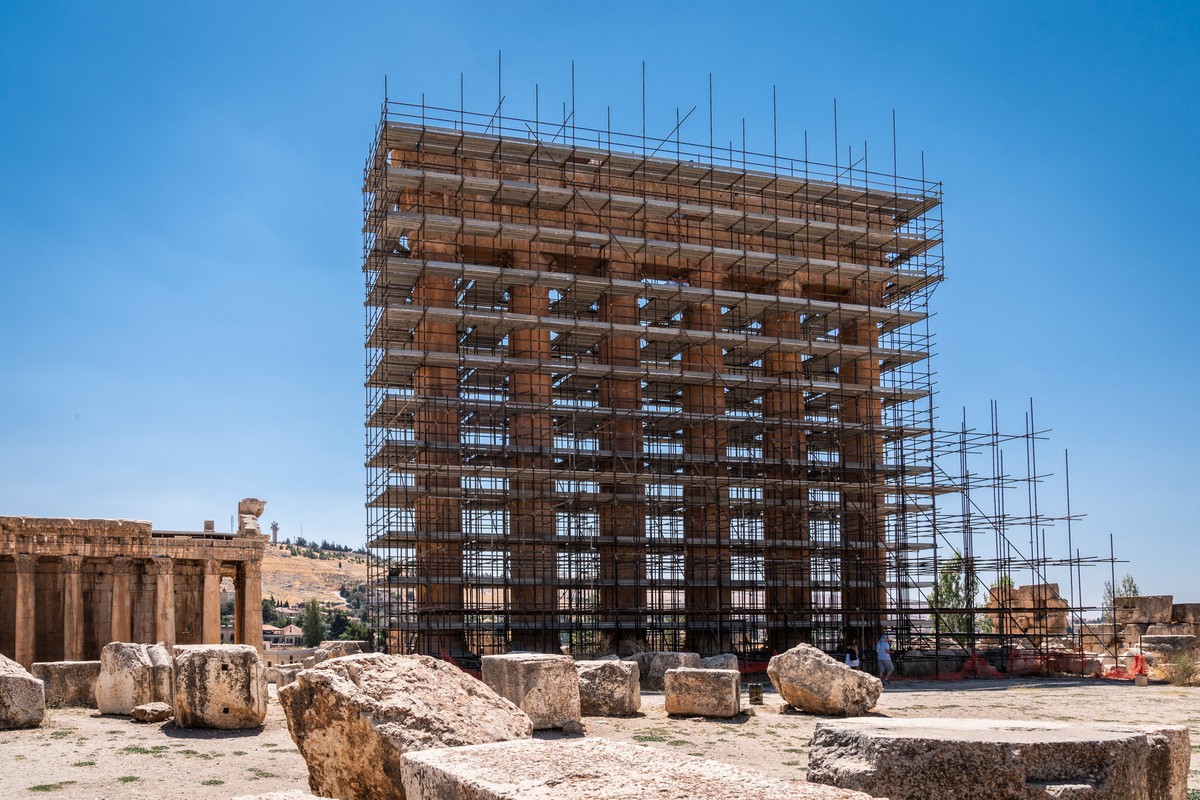 Onward we march, to the Temple of Bacchus – he of legendary wine guzzling fame – which had a corresponding air of excess and debauchery about it (or was I imagining that?). 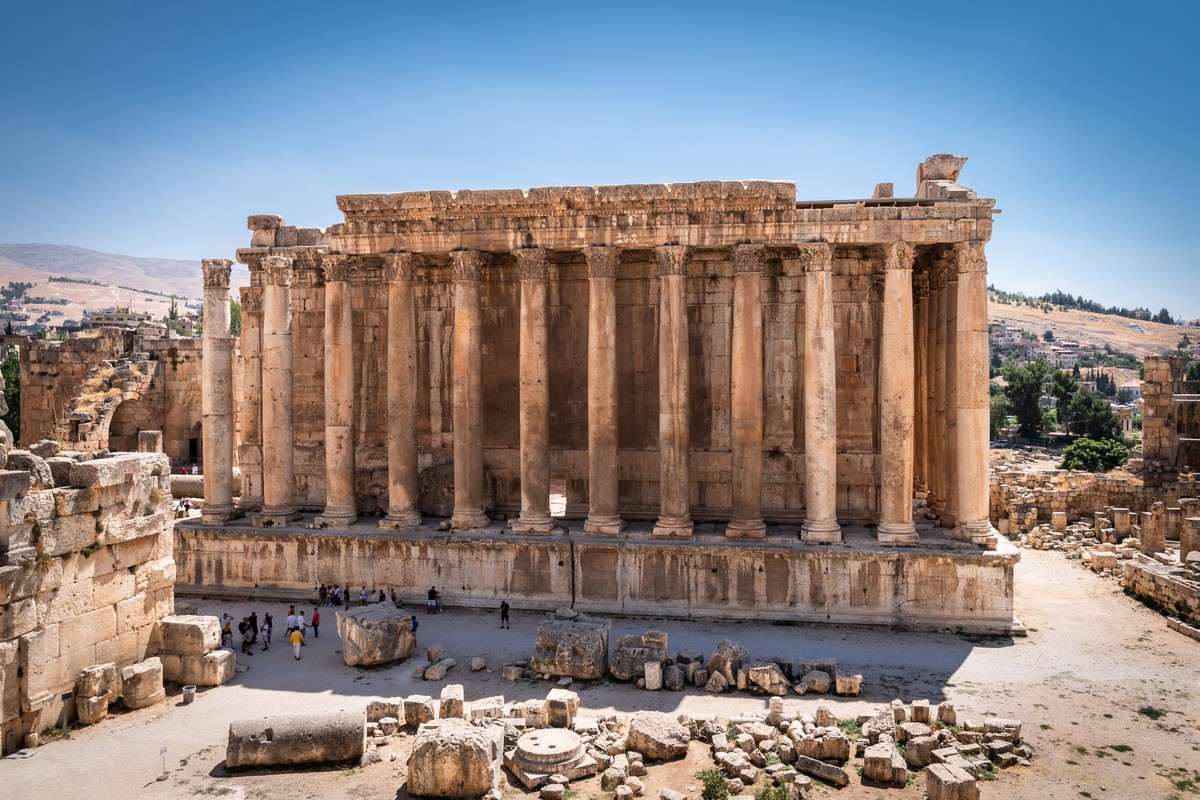 Before we enter, we come across this here sign with an imagined reconstruction of how it all used to look: 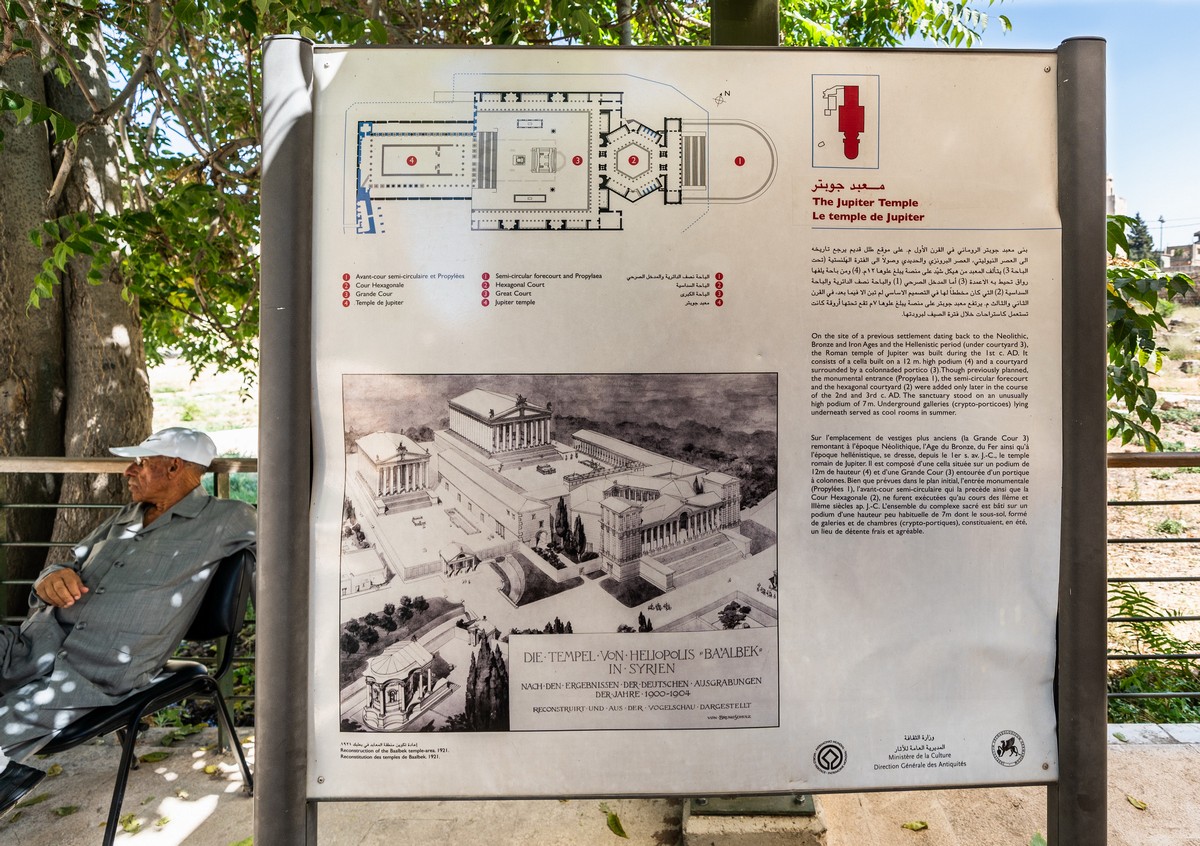 In this pic you can make out the writing: 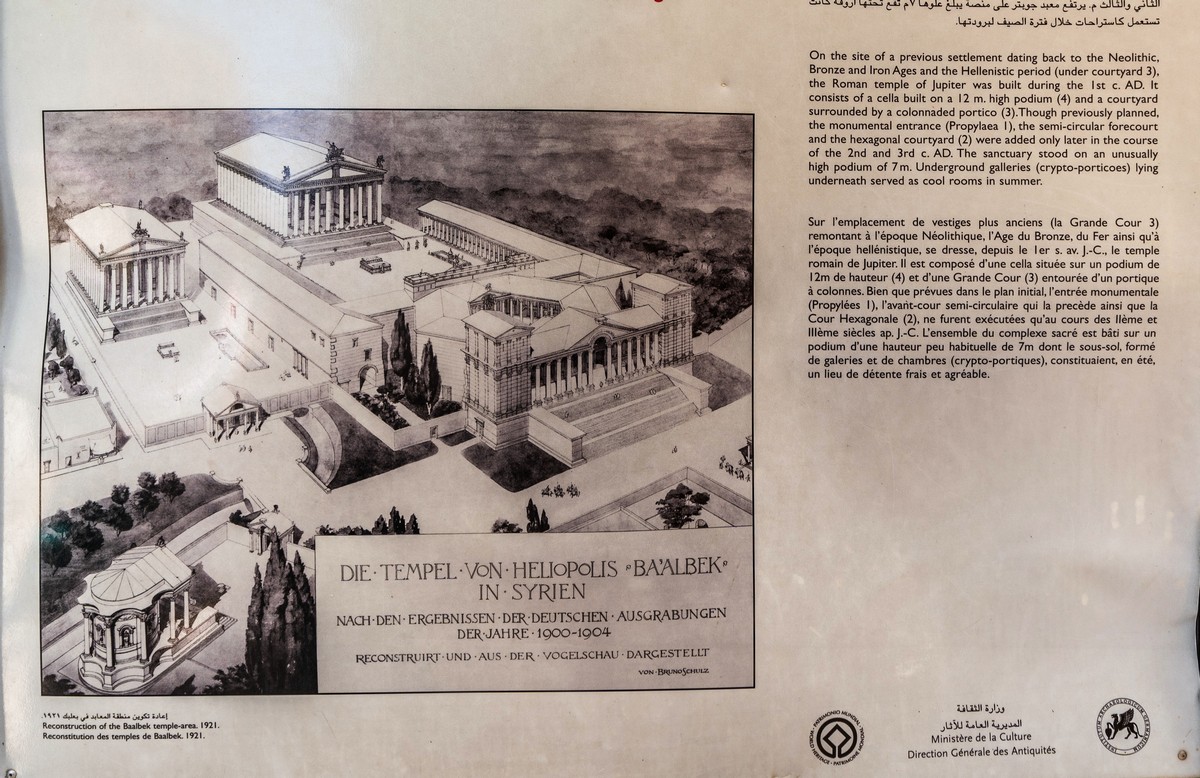 On our excursion we were told how the ruins were at one point abandoned and forgotten about – for hundreds of years. In that time the level of the earth/sand/assorted garbage rose significantly – up to the waist, as it were. You can see this by the ancient graffiti etched into the stone – near the top of the buildings!

The fact that the complex was entombed in dirt/dust/trash was what actually preserved it. Small mercies!

// I still don’t quite get it. So, folks just couldn’t care less about all this and just left it to gather dust over centuries – to the extent that the whole complex was practically covered in dirt? Imagine that today: we just decide to abandon something beautiful, amazing and ancient, and let it gather dust for centuries, only for our descendants to later one day uncover it all and ask: ‘what were they thinking?’!!

Check the graffiti – one bit states the year 1884! I wonder if whoever chiseled that – in heaven? – is still ashamed of that indelible vandalism? Still – I dedicated a paragraph to that there aged inscription, so there is at least some historical merit to its being there ). 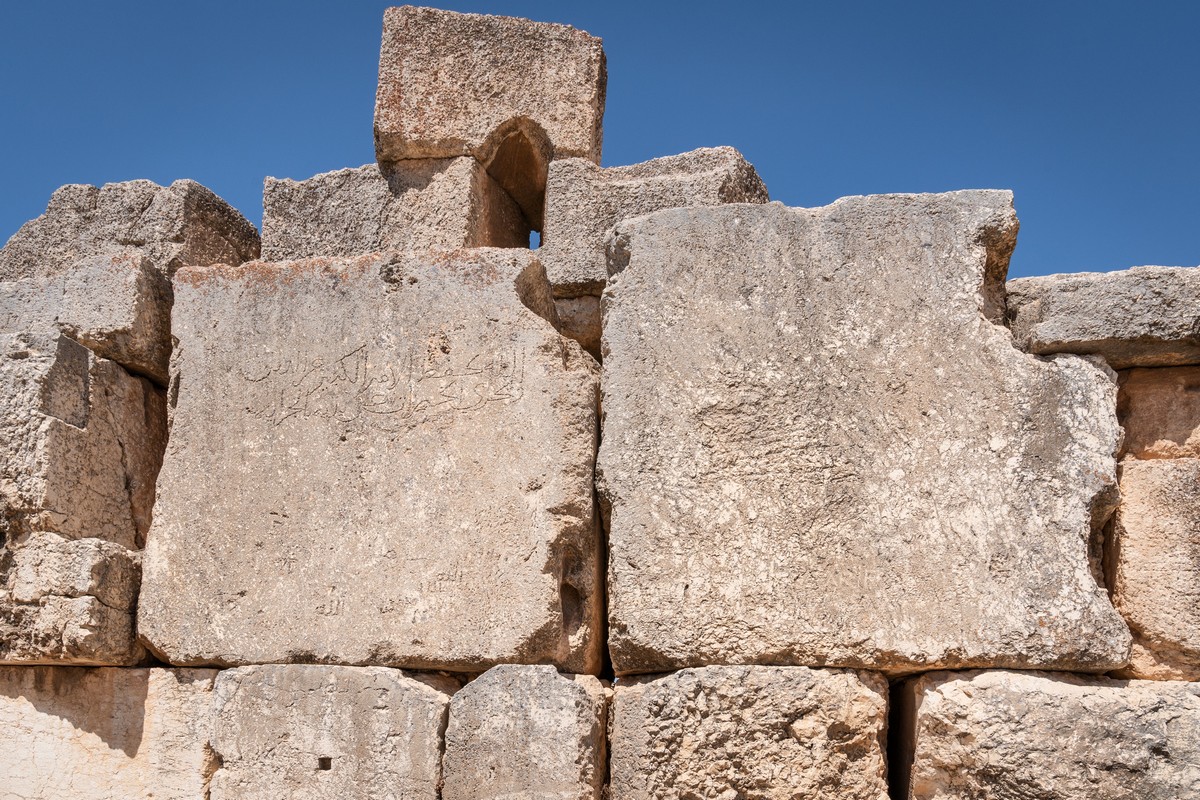 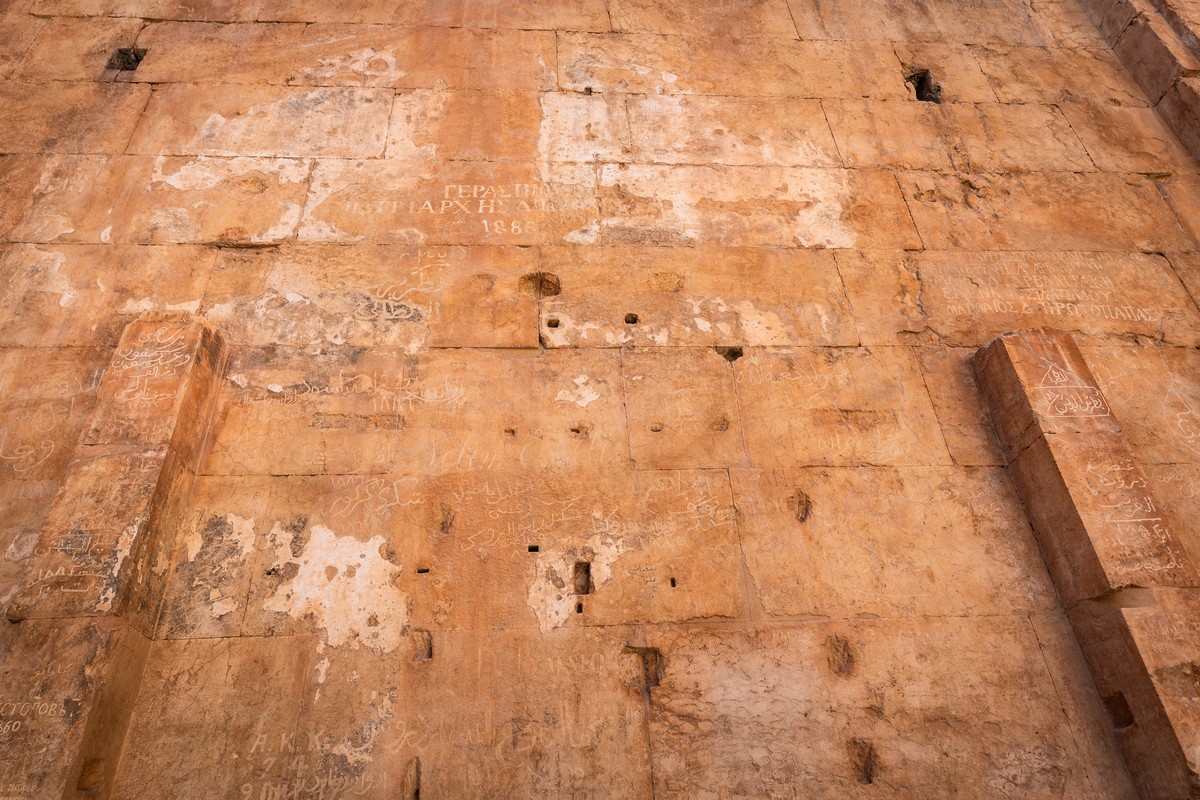 Now – enough exasperation with human nature (forgetting about this place); back to the extraordinariness of this place – specifically, the Temple of Bacchus: 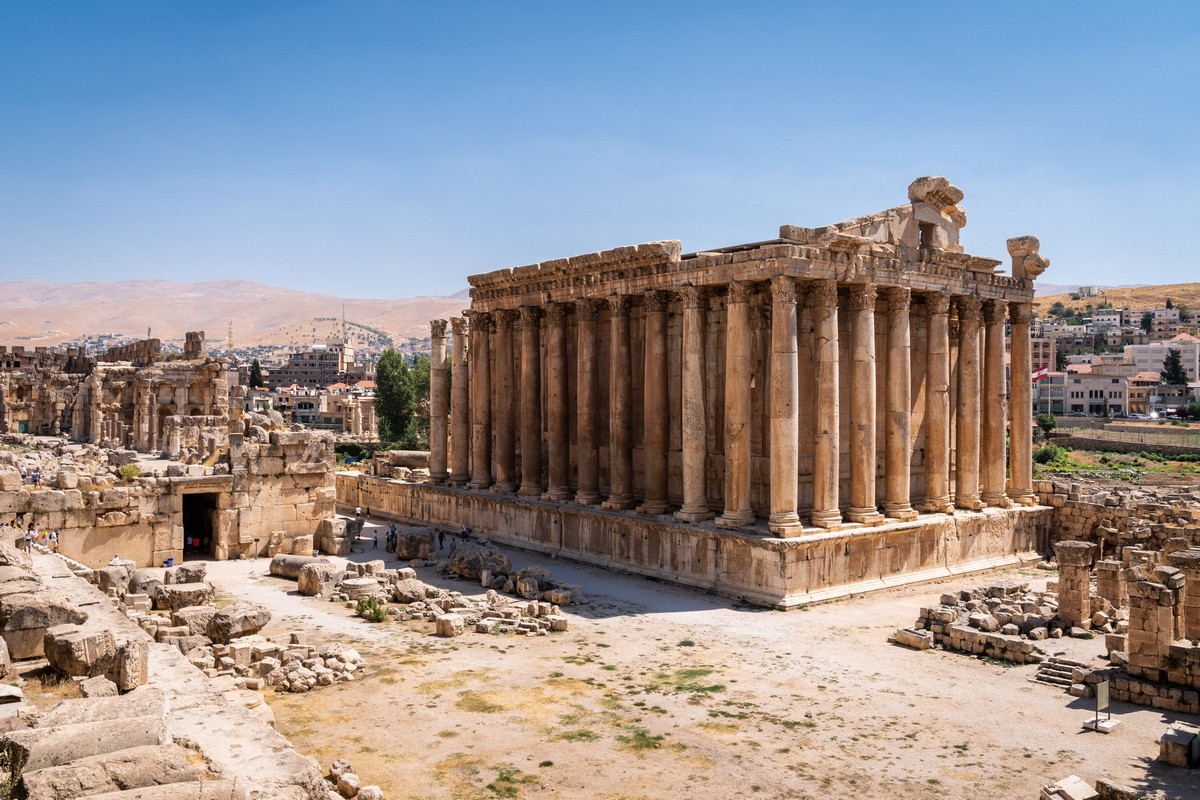 Notice how – though built two thousand (2000!) years ago, the main structure is still standing tall and straight, just as it was built. Not like some other ‘ancient’ buildings (from just 400 years ago) I know of ).

The main steps up into the temple: 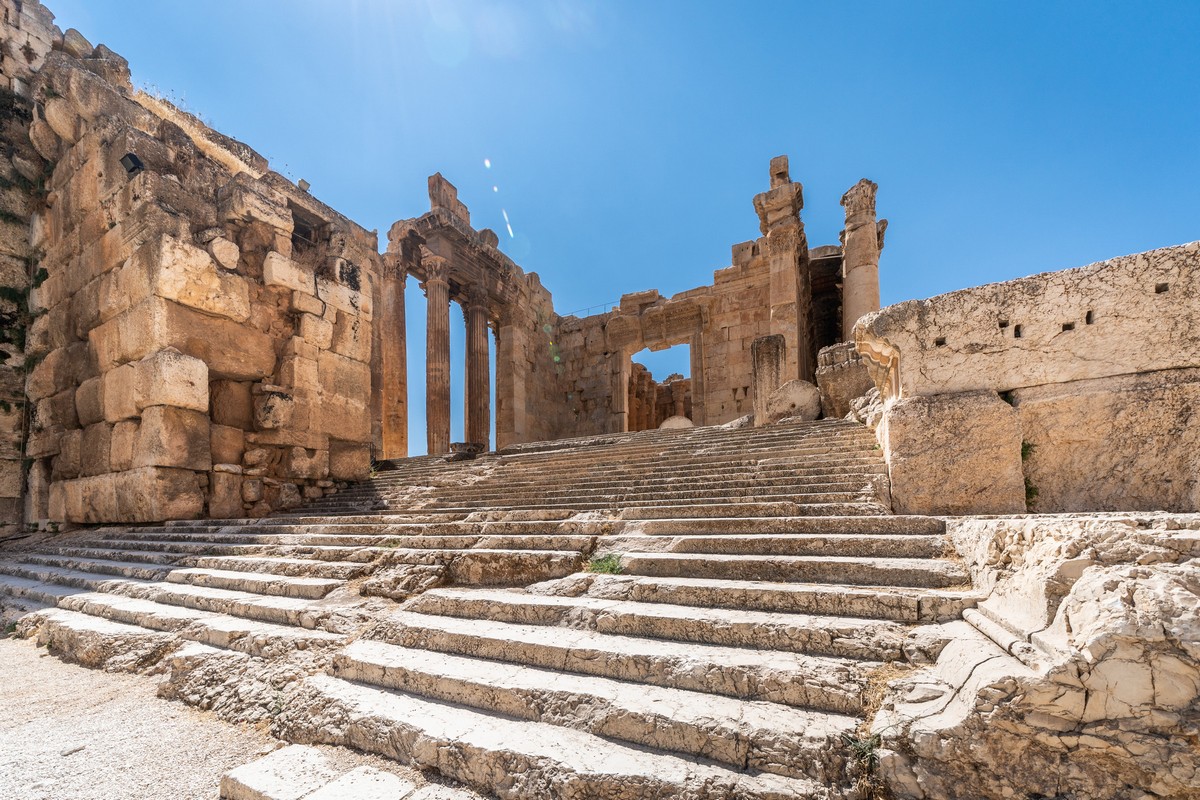 A lot is in bad shape – but not everything: check this stone – still wedged, suspended, between its neighbors!

Here’s the main hall. Oh my grandiose. You really need to check this place in the flesh to grasp its full magnificence: 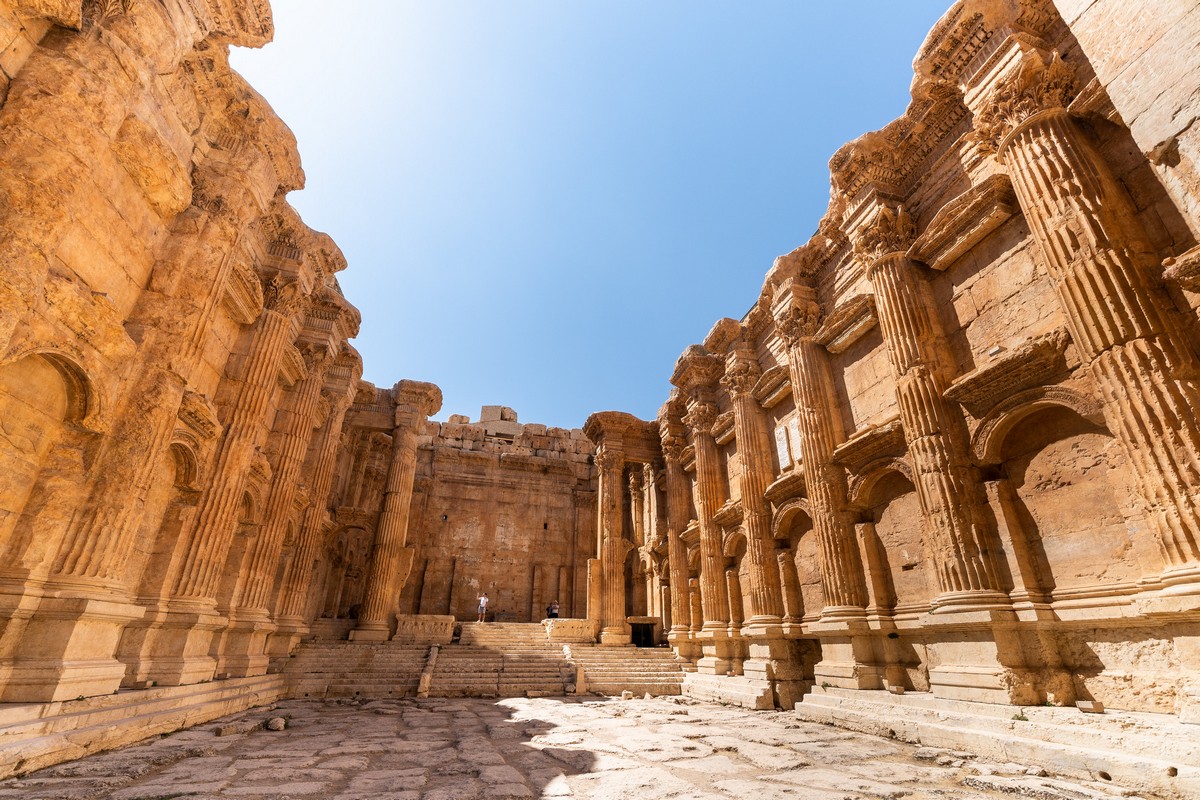 They don’t make ’em how they used to. If only they could bring back to life – and forward in time two thousand years! – the architects, builders… 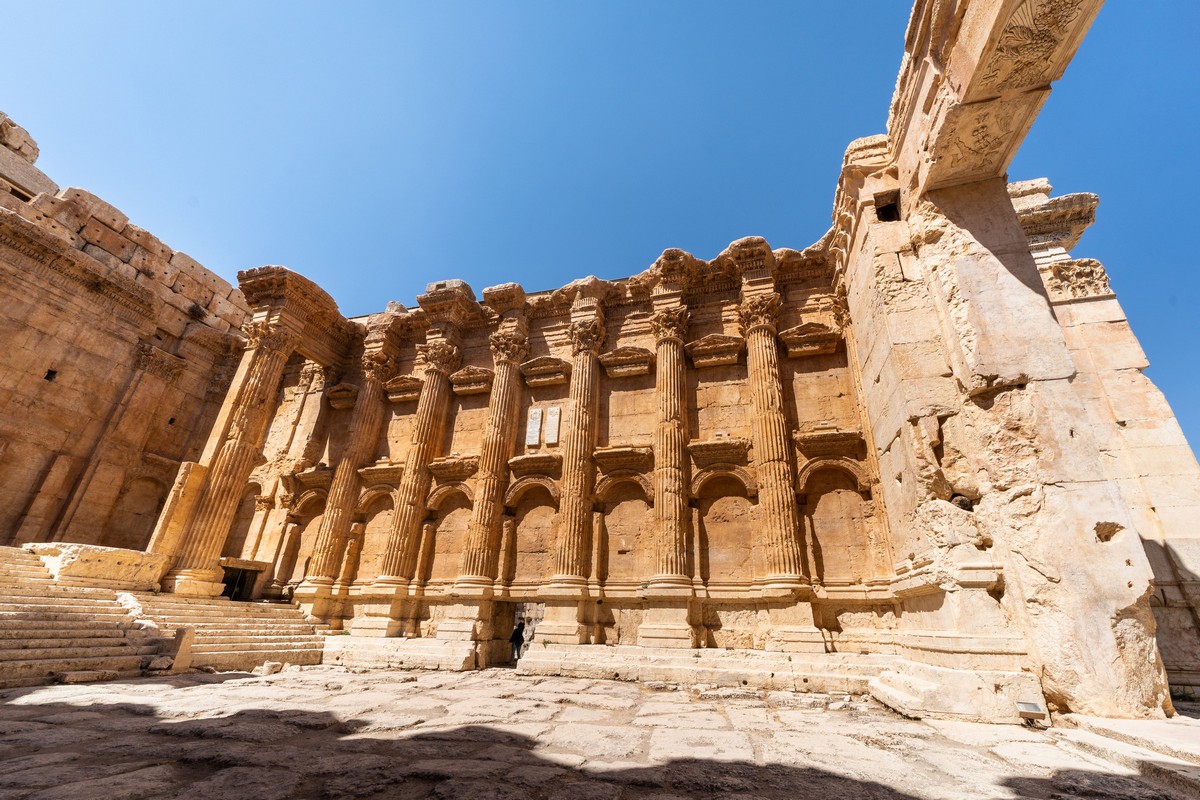 If only for me to shake their hand (and perhaps ask them if they’d like to renovate my Moscow apartment residential block! 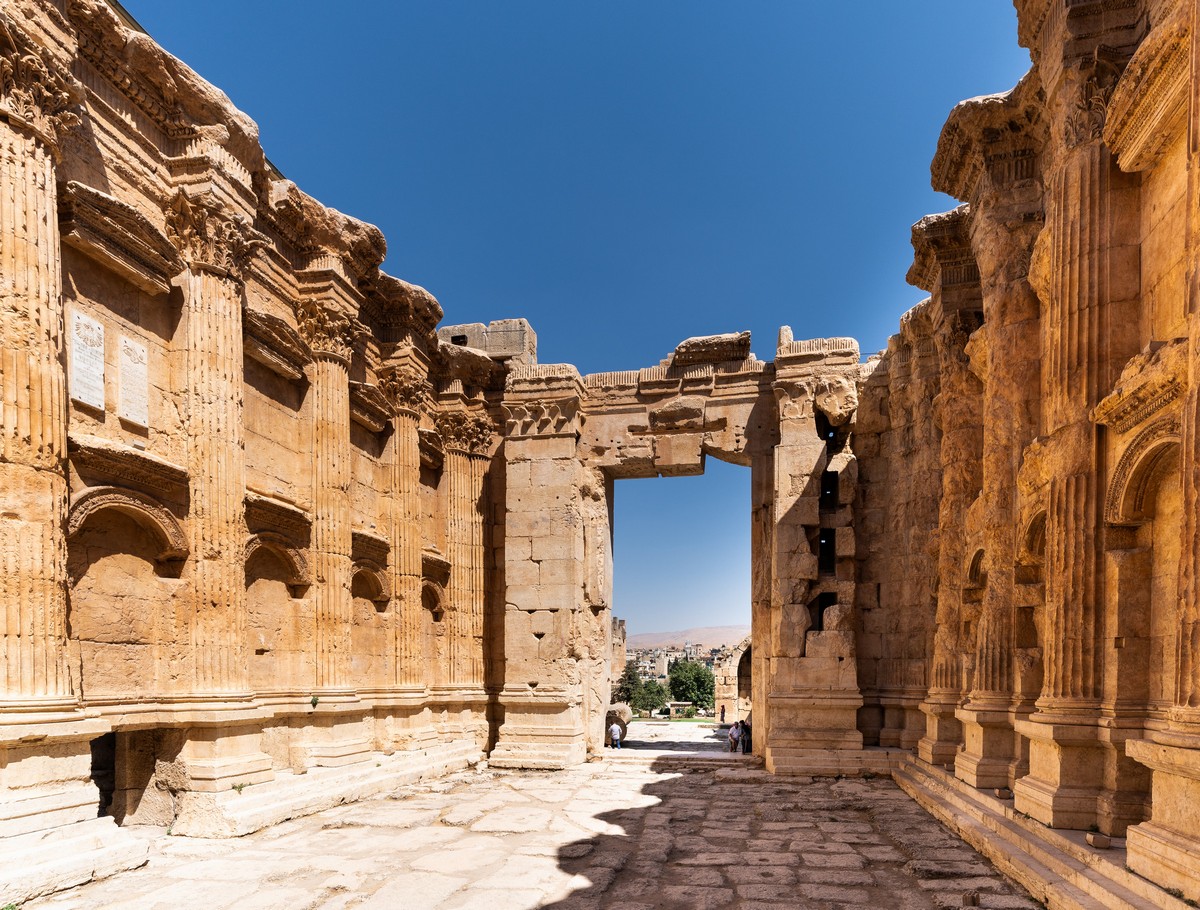 The wizards responsible for this temple – where did they go? Why did their know-how and technologies die out? How much did their dying out slow human progress? So many questions unanswered… 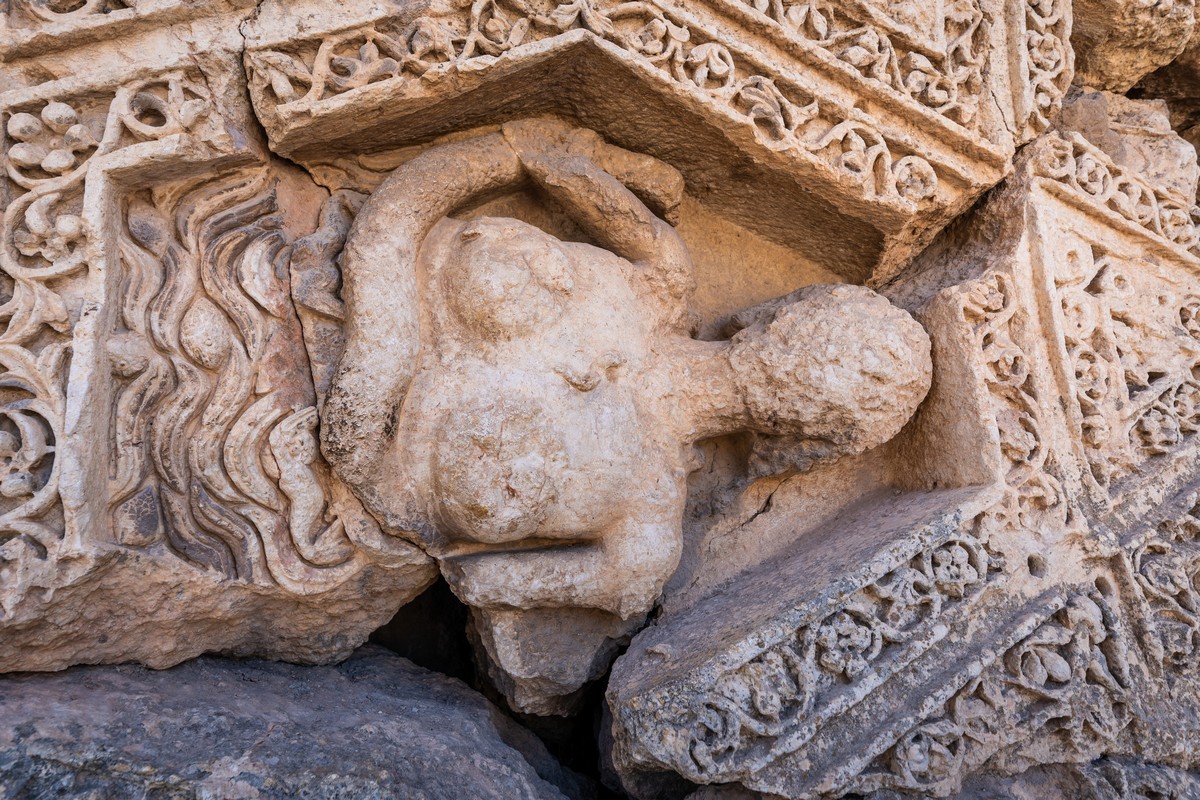 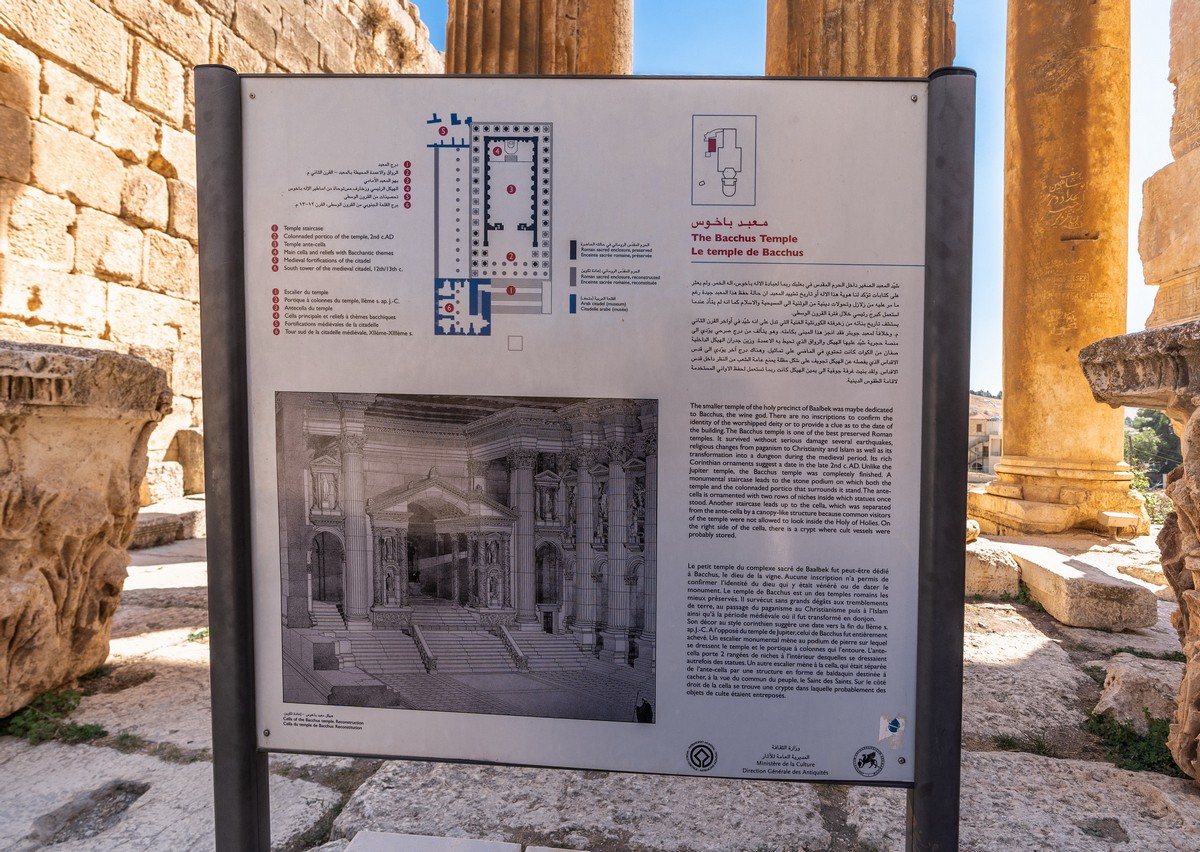 But it’s still so incomplete.

And it’s not just the large artifacts like the stone pillars, walls, etc. Baalbek minutiae are also staggeringly bewildering. Check out these carved stones:

The following piece fell of the roof – and didn’t smash into smithereens! The lions were water drainage outlets, btw!

Just look at the detail (grape leaves, birds…). Imagine the amount of time it all took to carve: 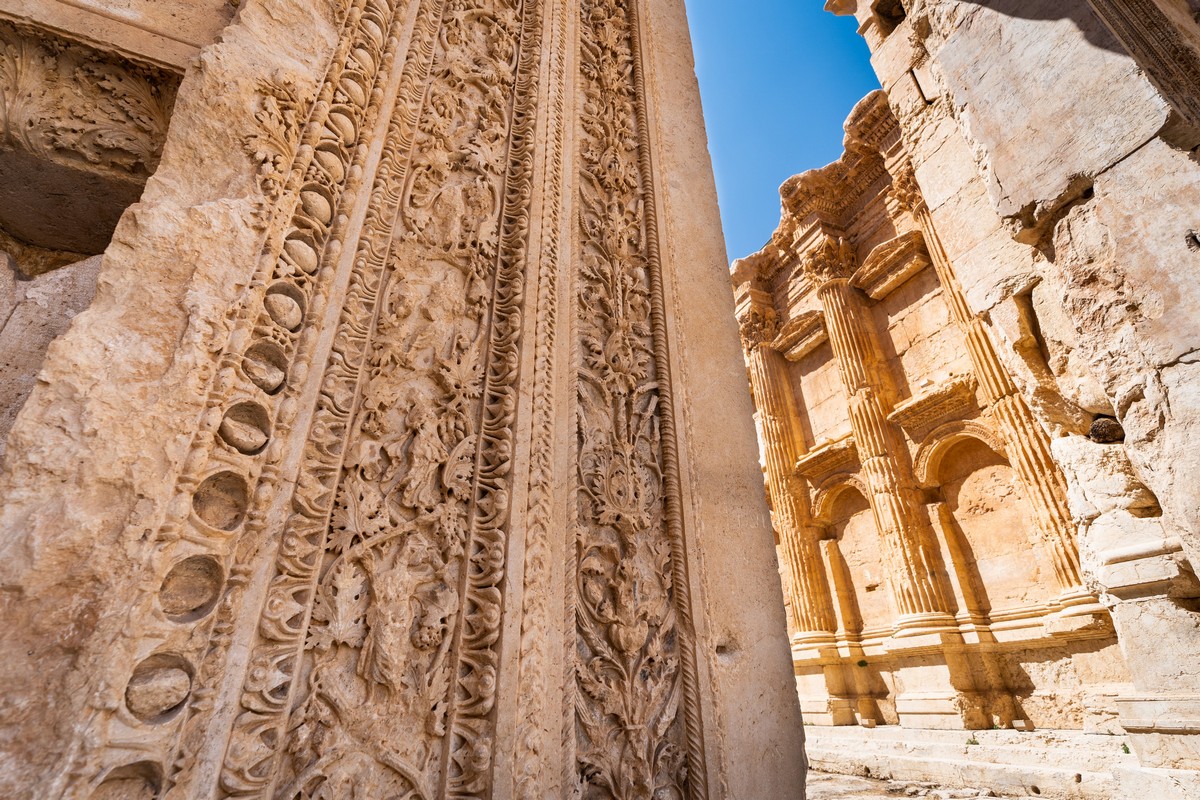 Here’s that suspended stone again. Even though it’s managed to stay put 2000 years, I still found myself walking very quickly under it to get out of the way – just in case ).

IKEA-style staircase – made up of separate components: 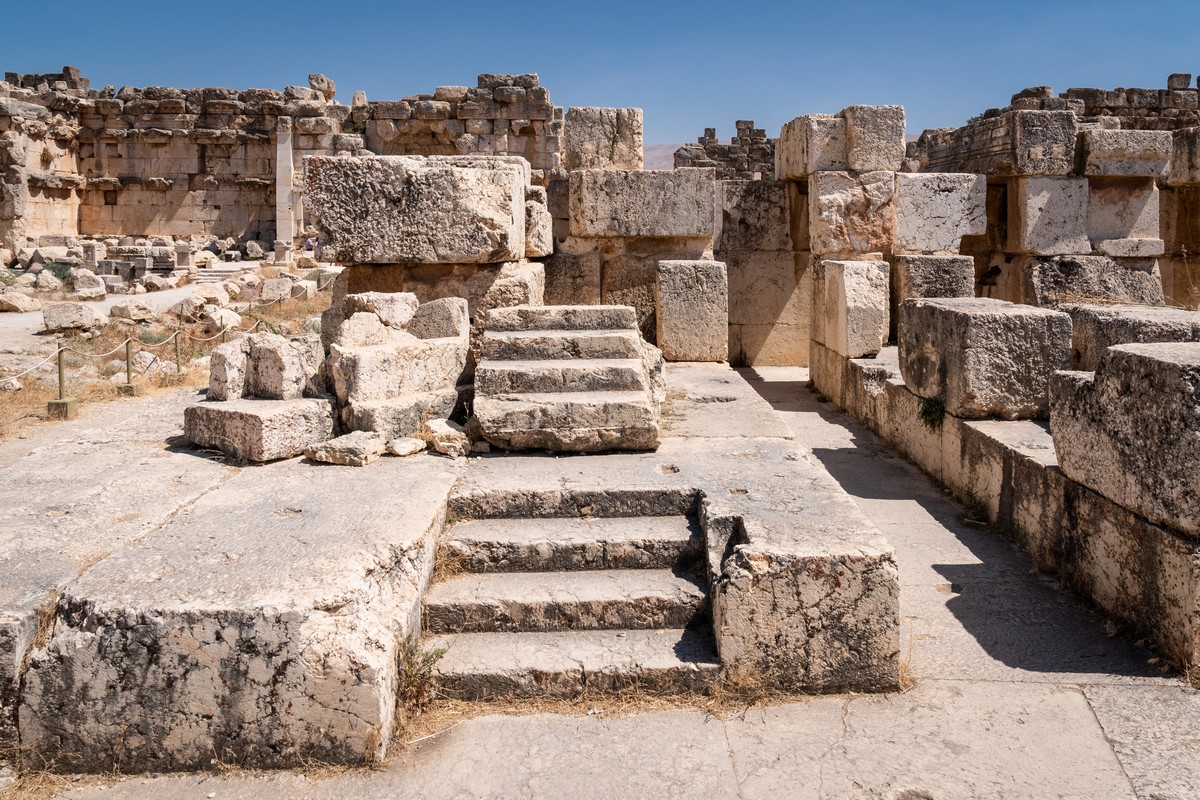 Comparing IKEA furniture and this – sorry: a mistake ).

Each hand-chiseled ‘brick’ surely weighs several tons. And there are zillions of them!

Here’s a unique picture. The steps there – they’re a modern addition (we were told this by our guide). But check out that stone next to them. Even today, shifting that thing the shortest distance possible would take a mammoth engineering feat with mammoth heavy machinery. So how did they do it 2000 years ago?!

But there’s more – underground: tunnels. Mysterious constructions – but still standing proud. Good for cooling off on a hot day – and most days here in the Middle East are hot. And these, of course, would have been built before all the wondrous stone masterpieces above-ground. Oh my giddy-just-thinking-about-it ).

This turned out to be a long post. I hope you’re all still with me here at the end. Not that it is the end – for there will be more from brilliant Baalbek a bit later.

All the pics from Baalbek are here.