Next up on my Greek travels – Athens. I had one day off between business meetings to have a quick glimpse of the city.

Though I’ve been practically all over Europe down the years, for some odd reason I’d never made it to the ancient center of Athens. What makes that especially odd is the fact that I go mad for historical ancientnesses. And as we all know, Athens has those in spades…

To me there’s something infinitely fascinating about the fact that these temples, houses (rather – their ruins), stone bridges, and the huge stone ‘bricks’ that make up the constructions… all of it was created thousands of years ago by folks just like us. Ok, without the smartphones and reality TV, but very much with eternally human features like having problems and experiencing joy and sadness and birth and death. They walked here, loved here, hated here, envied here, got their thrills here, built here, destroyed here. Thousands of years ago. Here in Athens, at places like the Acropolis and the Parthenon.

Alas, the front end of the Parthenon is currently covered in ugly scaffolding, but if you go round the back you get a better view of the structure without it.

Ancient ancientness. A colossal construction built almost 2500 years ago – in just 10 years! A true architectural masterpiece of its time. In terms of both size and grandeur it’s probably on a par with St. Peter’s Basilica in Rome – and similarly adorned with statues, sculptures and frescos. 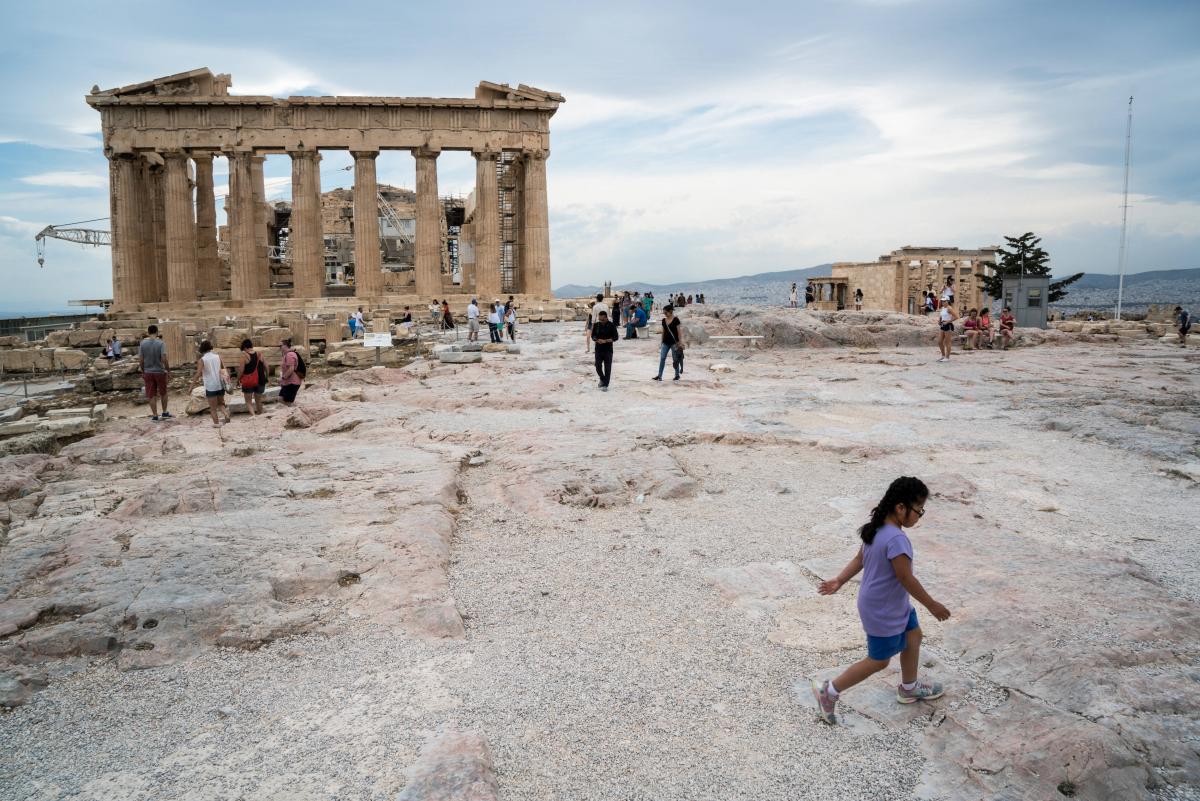 These stones! A bit like with the pyramids, you wonder how they managed to put them all in place without modern cranes! These stones – they’ve seen so much. And now they’re getting repositioned – with the help of modern cranes.

And while the stones stand there all stoic, what’s modern man doing around them? Taking tera-tons of photos and selfies and flooding the net with them, while the locals – descendants of the ancient Greeks themselves – trade tickets and check that the naughty tourists don’t take away with them small stones as souvenirs. And that’s progress?

Still on the stones theme… my travel companion, A.Sh., commented:

I’ve heard a tale, though I’m not sure it’s true, where every night locals bring around a ton of rubble here for the tourists – so they can think they’re taking a piece of history with them while doing no harm to the real-deal historical objects!

Hmmm, must say, if I were the chief engineer of the Acropolis, I’d also ferry in a ton of rubble. But not so much for the tourists to pilfer as for the reinforcing/concreting of the structure. Ok, the tourists can take a few pieces each too; it’s not as if they’d take a ton per day, is it?

Here’s the view of the Acropolis from down below…

The Areopgaus. Know what that is (before checking out that link?). It’s the rocky outcrop in the following pic not far from the Acropolis. Not a lot of people know that, I’m sure – including me until just now. 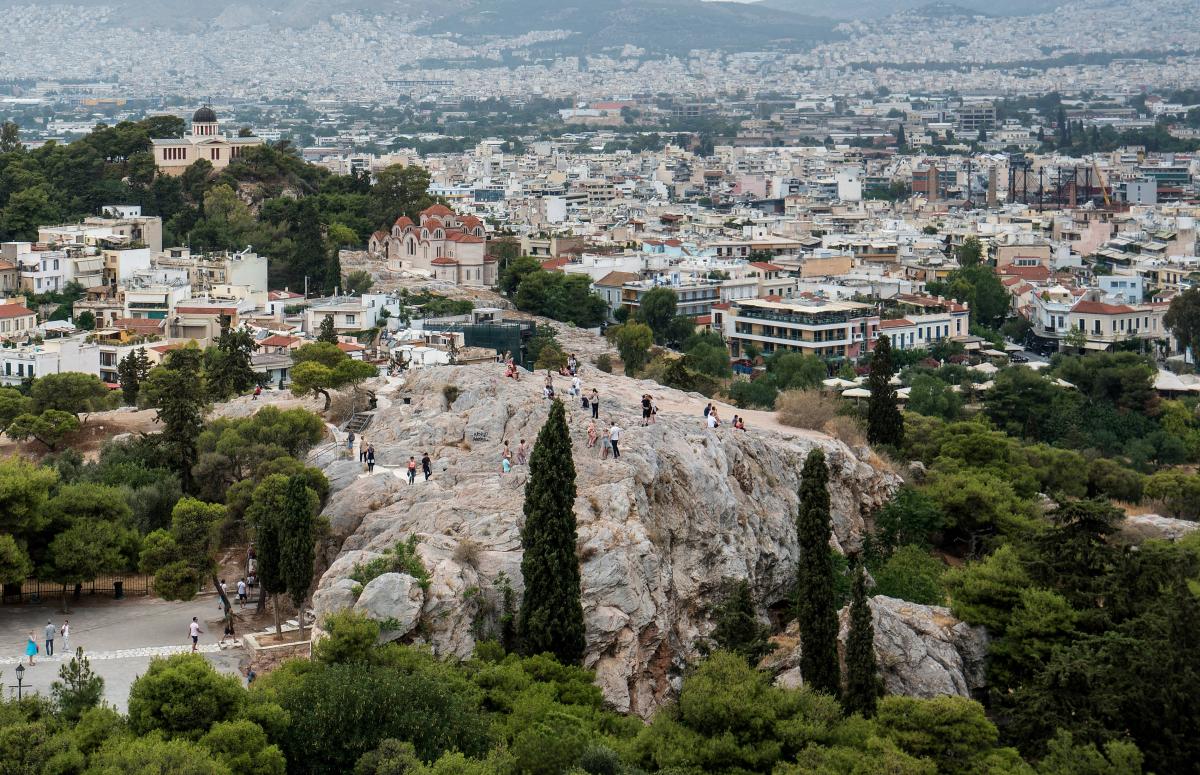 Down below the rocks and walls of the Acropolis the modern-day Greek capital lives its life in all its contemporary glory. As can be seen to the naked eye when strolling around Athens the standard of living appears somewhat spartan for Europe, but wholly cozy. And some houses have the mega-bonus of having ancient Athenian ruins to look at from their kitchen windows. Imagine that!

Ancient Athenian rocks atop a hill…

I wonder if these ruins will ever be put back together? Probably not. Who knows how the rocks were once erected eons ago – especially since the Parthenon was destroyed several times throughout its history. Wikipedia has a lot of interesting things to say about those various destructions. This plaque gives a good summarized account of them too: 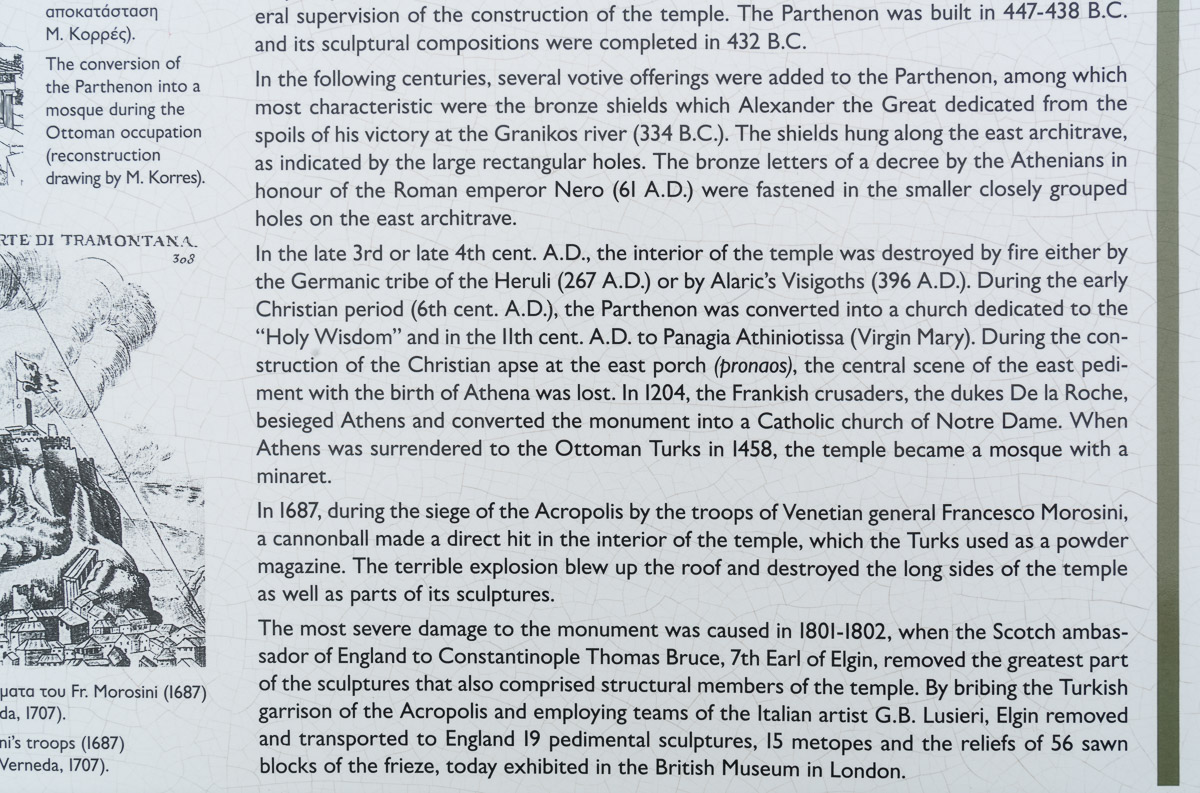 Woh. Hold on a sec. The civilized English did what? They, like, stole priceless ancient Greek national treasures wholesale? Or was it that they saved them from further destruction? I don’t know… The plaque there says (twice) the English removed them.

Around the Acropolis are scattered various other ancientnesses. For example, the Odeon of Herodes Atticus. To this day concerts and shows are given here (yep, the ancient Greeks had acoustics licked). Of course today’s incarnation has been rebuilt and restored, but that doesn’t lessen the significance of the fact that there’ve been concerts going on here for 1850 years! One thousand eight hundred fifty years! I wonder how many million zillion spectators have sat down here watching them…

Another ancient gem: the Theater of Dionysus. Built some 2500 years ago and still going strong standing! I hope it gets a face-lift sometime soon. Aha! I hear the Greek government plans to. However, that was back in 2009; a lot’s happened since then in the country that might delay things.

More antiquity… the Temple of Olympian Zeus. It took 650 years to build. Like, TEN generations! It was destroyed by barbarians in the 3rd century AD. After that locals quarried it for stone to be used on other building projects in the city! I’m not sure that’s not more barbarous than the barbarians!

Some of the antiquity here hasn’t been dug up yet, traces of some of it sitting right beside modern Athenian residential buildings. I wonder if excavations thereof will take place in our lifetimes?…

The Ancient Agora of Classical Athens. What’s an agora? An agora was basically a central area/square in ancient Greek city-states – a center for political, cultural, trade and sporting meetings. Oh, and this particular agora was the one where a little over two thousand years ago they had certain discussions which led to experimenting with an innovational socio-political approach to state regulation. They called it democracy. 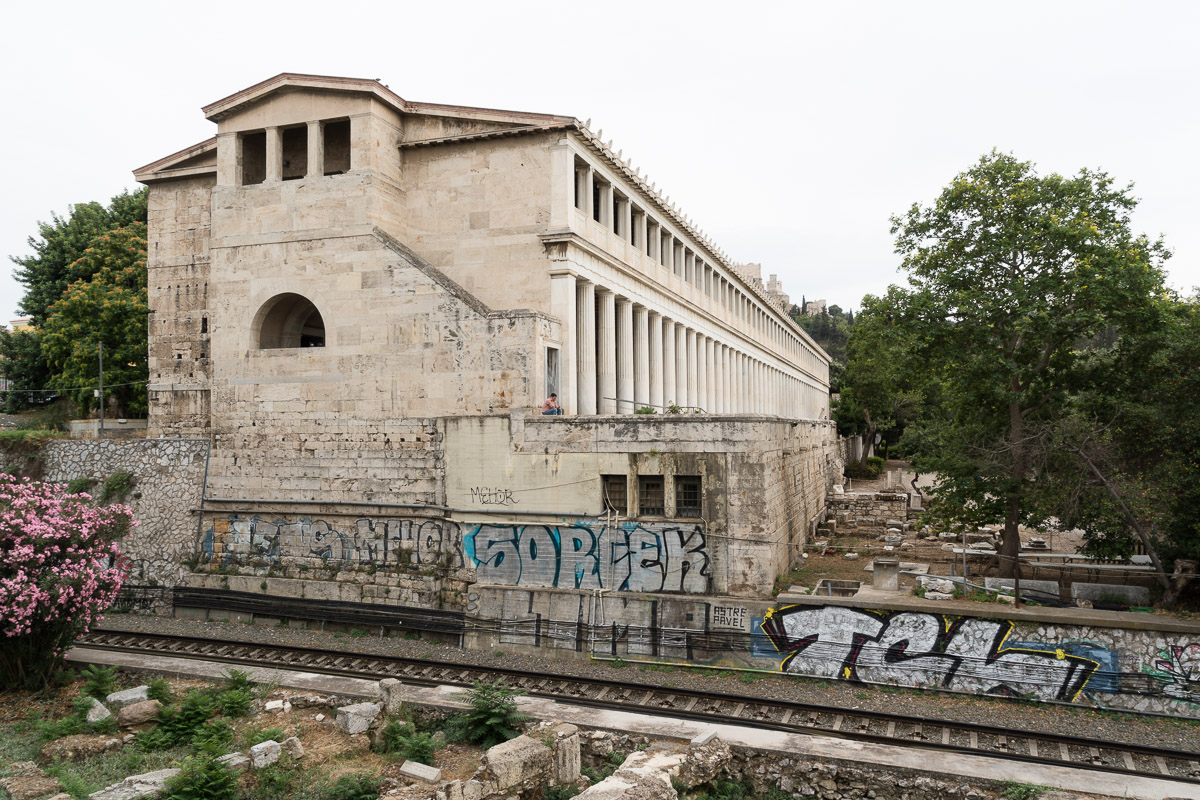 Now, I’m no historian, but it does seem pretty well documented that it was right here in Athens where the political system on which (most of) the modern world is based was invented. Of course, over the centuries since then it’s come on in leaps and bounds at certain times, and witnessed periods of marked regression at others, but nevertheless, what started here has become the prevailing political system of the world.

The Roman Empire copied a great deal from Ancient Greece. Then Rome went on to build Europe based on its principles. Then Europe exported the approach to America, Asia, Africa, and Australia. And that, in very basic terms, is how the civilization of the whole world is a direct or indirect descendant of Ancient Greece – meaning Athens, meaning its Agora!

There are so many Greek words in European languages! For example, Δημοκρατία (democracy), τύραννος (tyrant), πολυκλινική (polyclinic), βιβλιοθήκη (bibliotek/library), άλφα (alpha), αστήρ (astro). Whoah. Even my name – Eugene – is Greek! But I digress. Now back to Agora… Two thousand years ago this was the center of city life. Elders convened, state bureaucrats carried their dictates here and there, then everyone hit the taverns and arenas to relax after the long working day, traders traded, the common folk chattered, restaurateurs fed, thieves thieved, carnal services were offered (and accepted) for small considerations, porters portered, herders herded. No Internet!

Here I had another fit of inner conflict: If ancient ruins are found under the ground, should they be just left as they are – ruins; or should they be reanimated with the help of metal enforcing rods, concrete and other filler to recreate the original appearance? I’m just not sure. It’s like a Brexit – no one seems sure where they stand on the issue :).

After thinking long and hard about it, I decided I’m for restoration. I think that’s what the original architects would have wanted.

P.S. Athens/Ancient Greece – it was such a progressive state/political system that in a very a short time saw off all other systems thought up my man. Athens leaped forward and upwards. Later it grew fat and eventually died away. It’s a complex topic, but one that needs to be thought about deeply: we need more learning of lessons from history, so as not to repeat grand mistakes made in the past…