In getting to the island of Olkhon (while still on the mainland), I have a feeling we were taken off-road on purpose – so we could put the Land Rovers through their 4×4 paces to the max while also getting some of the better views of the lake while driving alongside it. Well, the Land Rovers not only perfectly passed the test – they also helped pull out a mini-bus that had gotten bogged down in a spot of mushy ice that had been melted by the sun.

The story was quite a fun one, btw: the mini-bus was carrying some Russian tourists, and it was following a route along which probably one vehicle passed each day – well that was this vehicle!  So, they were literally in the middle of nowhere, stranded, with little prospect of being rescued – at least on that day. You can imagine how desperate those poor tourists were becoming. Anyway, all of a sudden – da-daaa – along come eight mighty Land Rovers! They couldn’t believe their luck. Then, when I got out of the driving seat of one of the Land Rovers, was recognized, hooked the rope onto their bumper, then got back behind the wheel to pull the mini-bus out of the mush, well, I have to say it looked like they might faint!

The Soviet leader Leonid Brezhnev was know to like fancy cars. One Sunday, he fancied a drive. So in he jumped, with his driver transferred to the front passenger seat. Off he races out into the countryside. Of course, after a while of doing well over the speed limit, eventually the traffic police pull him over. One of the police officers goes over to the car while Mr.Brezhnev winds down the window. The driver, naturally, is stunned, stands there frozen, eyes as big as saucers, and slowly turns back to his colleagues, who shout over: “What’s up Boris? Who’s the VIP being driven around at such crazy speed, then?” To which Boris replies: “Well, actually, I don’t know; but his driver is Brezhnev himself!”

Still on the mainland, perhaps the most memorable experience was stopping off at the village of Bugul’deyka, or, rather, its abandoned marble quarry. The place is nothing too special, but it was worth a quick look around. I wondered – why did they give up extracting marble here? Surely there’s always a demand for this posh construction material loved by five-star hotels (and five-star metros:). 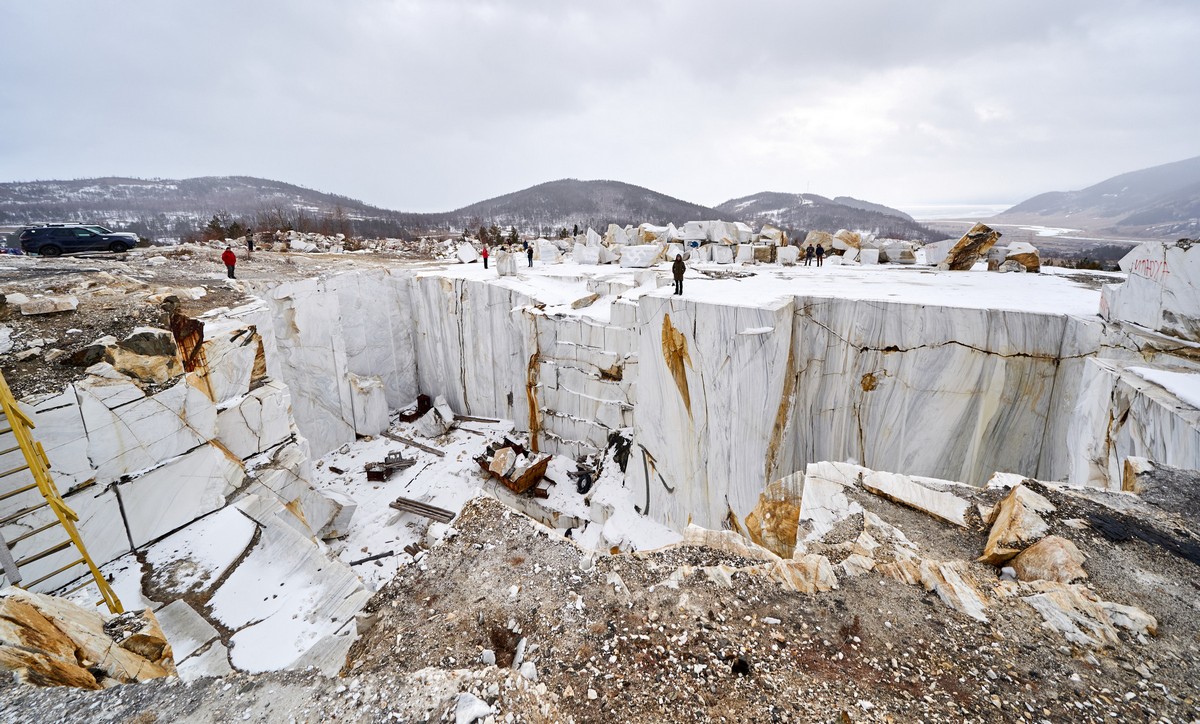 My wonderings were soon answered: apparently this marble is a soft kind – only good really for sculptures; no good at all for construction. In Soviet times, when statues of Lenin were always popular (there would be many in any city, at least one in most towns), this place was kept very busy. These days, with patriotic-ideological monuments less in vogue, there’s just no need for its marble any more. The only folks who come here are the occasional tourists who’ve wandered off the beaten track.

A while later – it was across the ice and over to Olkhon. Turns out this island – its ‘capital’, Khuzhir, in particular – is the center of Baikalian winter tourism. In all around 1700 folks live on the island, while there appear to be hundreds of Soviet 4WD mini-buses per capita (for ferrying the thousands of tourists about): they were literally everywhere toing an froing! 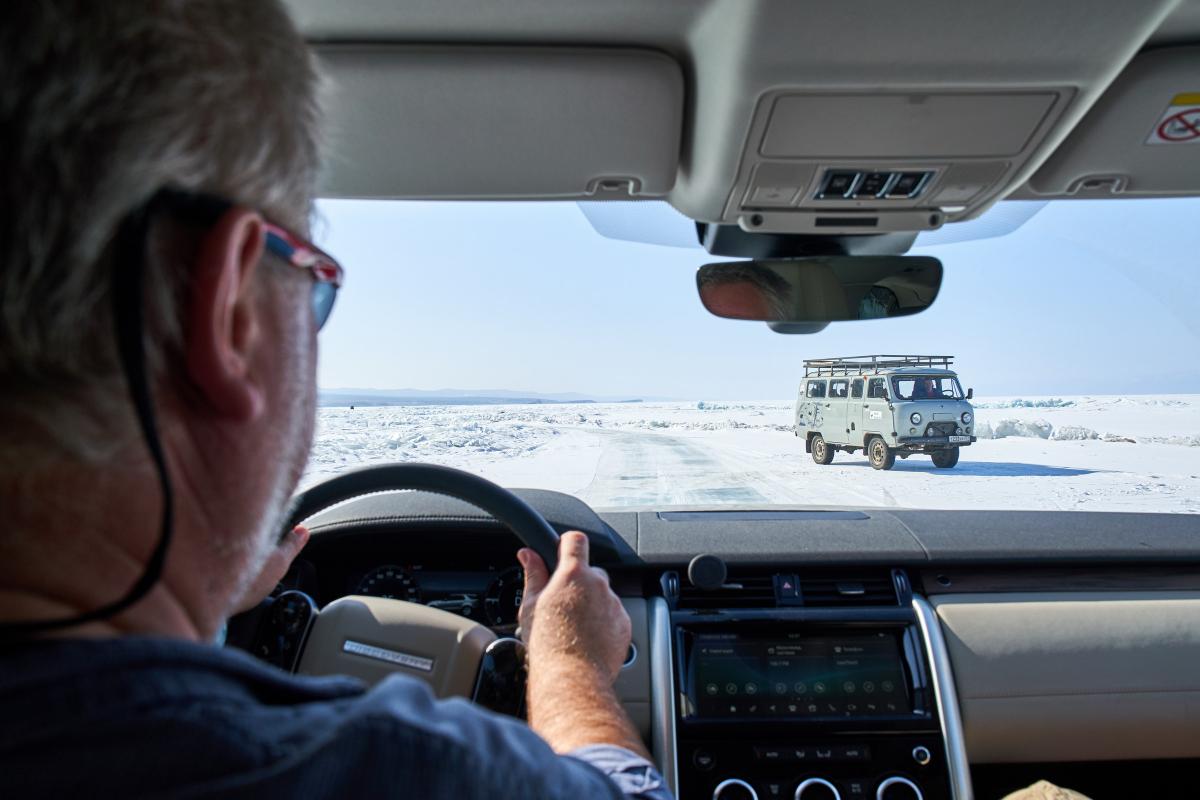 We had no need of the mini-buses; however, we did feel a need of… a hot-air balloon – one in mostly corporate green too!

As we rose up, we noticed one of the Land Rovers skidding around in circles on the ice. They must have been envious of us up there and decided to have some fun of their own ). 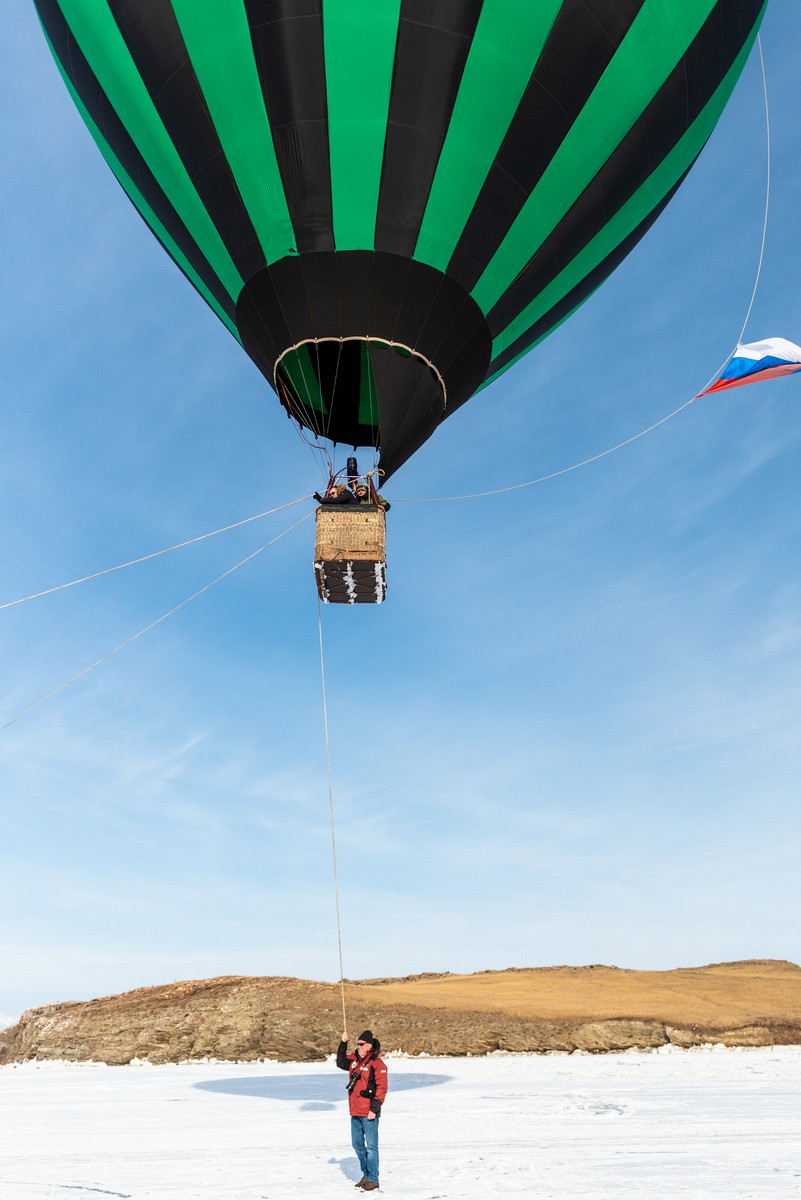 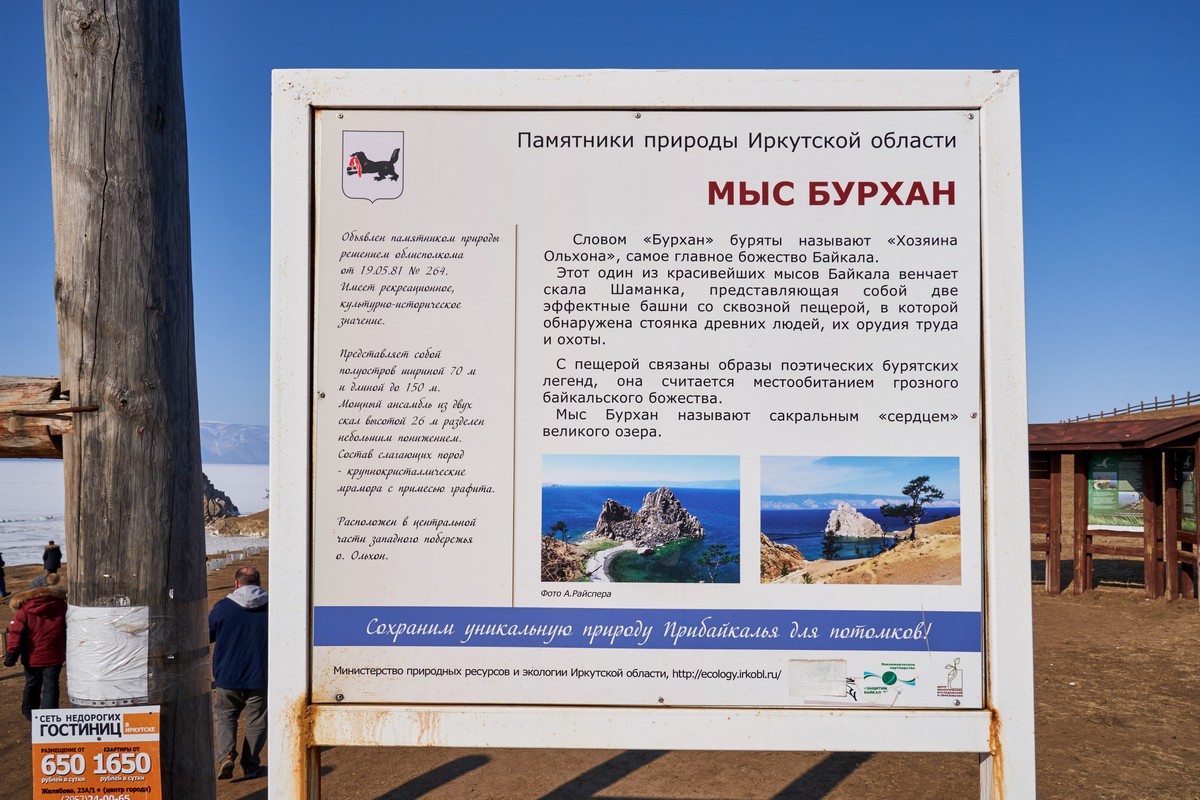 The views from here are breathtaking no matter what direction you look in:

Not far from Khuzhir, on the island of Ogoy in the Maloe More (Small Sea), there’s a Buddhist stupa of enlightenment. Indeed, plenty of Buddhists round these parts…

True to its name, the stupa is the perfect vantage point for meditating on the surrounding panoramas and reaching a higher level of enlightenment:

But the views alone won’t bring enlightenment. You also need to walk 11 times round the stupa clockwise. So we did! 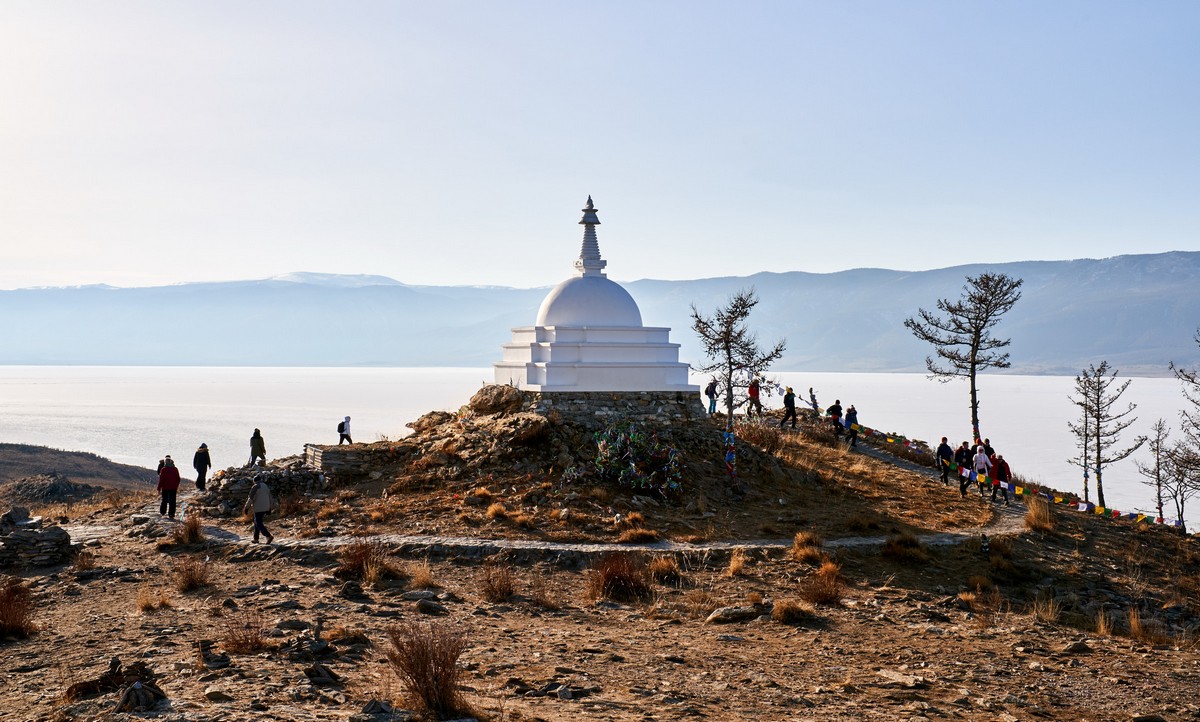 Actually, most of our party did the 11 laps, whereas I – not being overly superstitious – didn’t bother. The next day – I fell sick: I’d caught a bad cold and was running a temperature. I wonder… is this a sign it may be worth being superstitious, after all? (Or was it the fact I’d sat too long in the icy water? (see the next few pics?):):

As you can see – I’d tried and tested Baikal water in different ways: drinking it (sooo tasty), and bathing in it (brrrrrrr, but invigorating).

After the ice bath: time to eat – at the Olkhon Bistro Francais. I’ll let the pics do the talking – like Euronews’ ‘No Comment’ feature ).

And that brings my Baikal tales to a close. But the trip wasn’t over just yet; next up for us – the city of Ulan-Ude – the capital of Buryatia.

All the pics from our Baikal expedition are here.