The other week I had a quick – six day – outing over to Lake Baikal in Siberia. As could have been expected, it was a delightful trip, with the six days passing so quickly it was as if time itself had been shortened. Ice, snow, endless expanses, entrancing enjoyment. And – oh my gigabytes – a ton of photos we appear to have taken. Ok, while I’m sifting, selecting and editing, I’ll give you some traditional aperitif-pics to whet the appetite…

But those 25 photos are just the tip of the (Baikal) iceberg, as you’ll see eventually. Baikal in spring – still iced over – it’s just off-the-scale picturesque and vast… I could describe it with all manner of adjectives denoting oh-my gorgeousness, but it seems that the internet has already done so: everyone and anyone who’s been to Baikal has come up with a lengthy list of words that are all basically synonyms. So I’ll be modest here, and just pick one. Hmmm. I’ll go for… glorious!

But the ice here – it’s just crazy: flat, in places with ridges, and the patterns… You can walk upon it and inspect all its varied beauty forever. Have a look what I mean:

The depth around this time of year – almost a meter.

And there it is – the genuine item – Baikal water. Sooo tasty.

The composition of ice to water is around 90%. That is, the level of the upper crust of the ice above the upper limit of the water underneath should be 1m*90% = 90cm; accordingly, 10cm above the level of Baikal water. Yep, looks about right. So we got the glasses out and enjoyed a swig ).

The ice just seems to go on forever. You look north – the horizon is ice; you look south – the same, unless some distant mountains come into view. Hypnotic scale and scenery.

You thought all ice was created equal? Think again. Here it’s real hard. Our vehicles’ tires with metal studs on them merely left small marks on the ice’s surface.

We were told how a film crew once came here to shoot a TV ad for a famous European brand of tires. The idea was to show how their studded tire would grip the ice better than any other. But it turned out the these mega-tires were of practically no use at all on this super-tough ice: Baikal – 1; tire brand – 0. “That’s not ice!” complained the film crew upon giving up their futile attempts at getting some friction ). 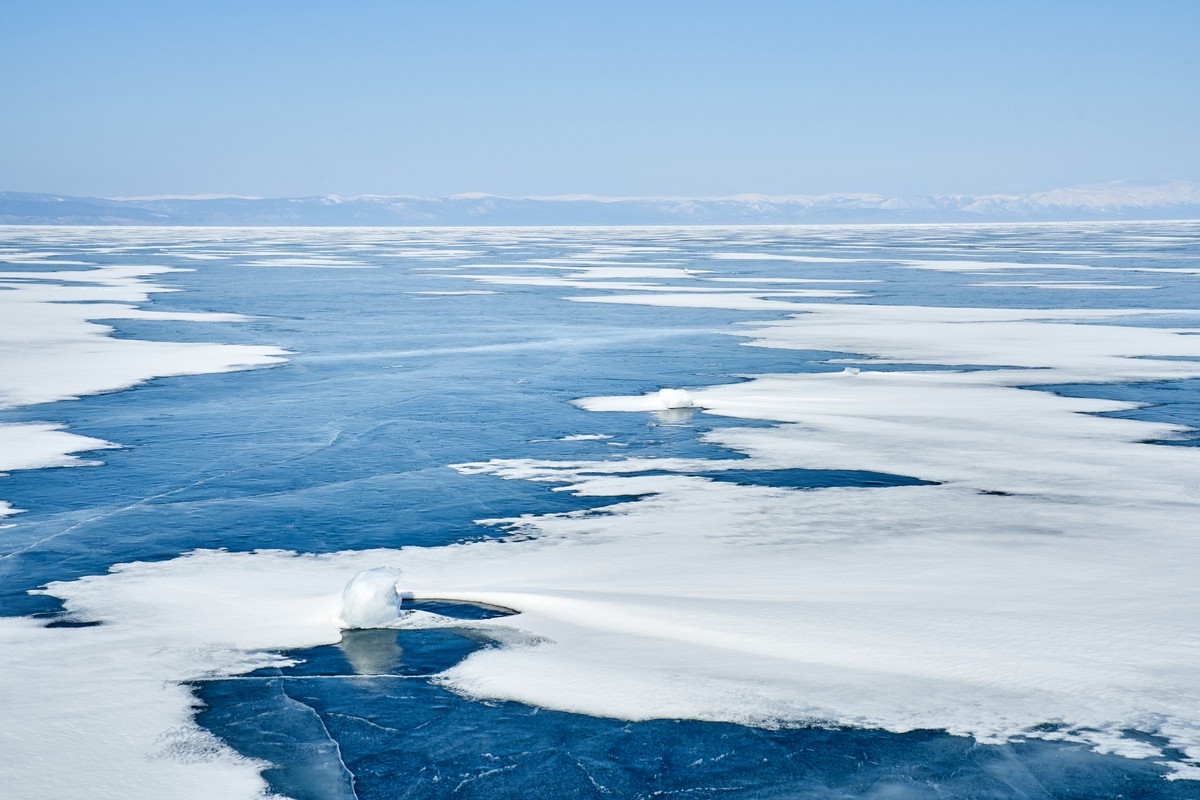 Baikal ice is… crafty. It’s a bit like the pied piper of Hamelin luring rats with his magic pipe. Baikal ice lures you toward it, but not with a pipe; just with its grandeur. So you walk across it, and keep walking across it, hopefully forever into eternity… but then the guides behind remind you it’s time to head back and have lunch! 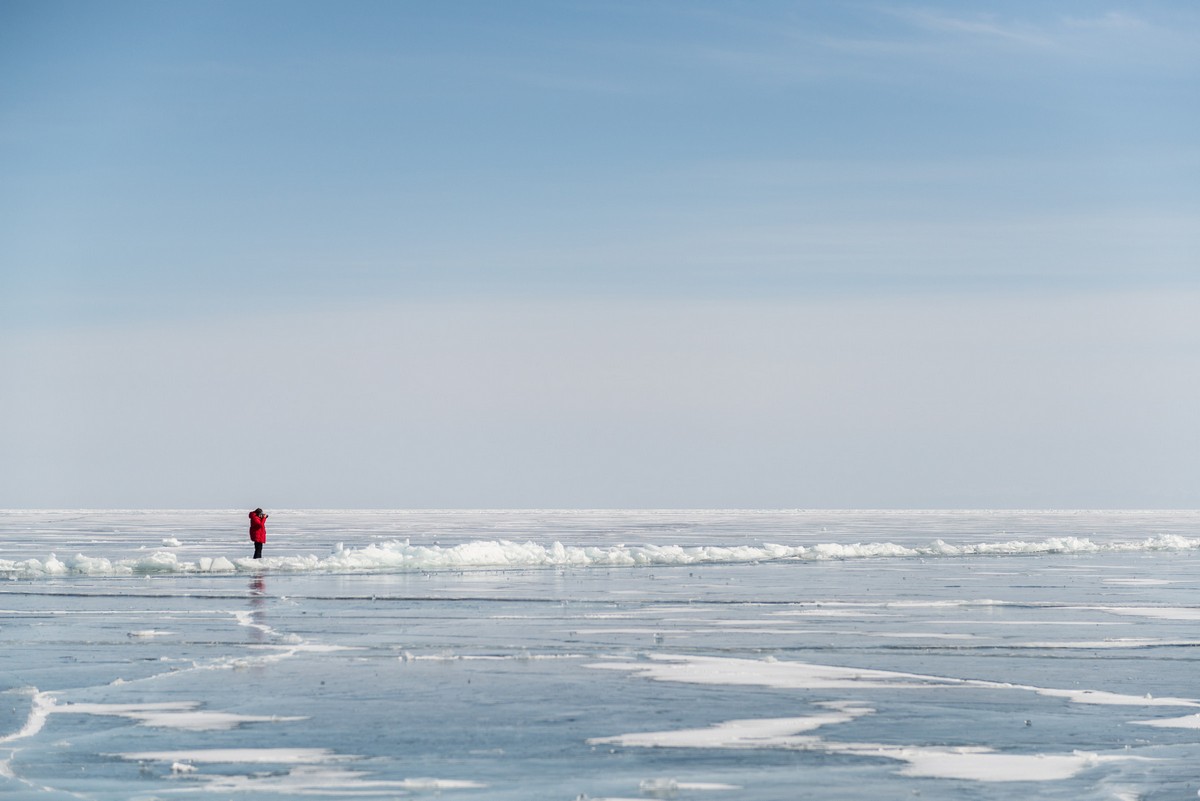 Baikal ice is… designer ice. Patterns, forms, different shapes that will probably never be repeated anywhere ever. Little pockets of air in places can be seen that seem to reach up to the surface. Then everything cracks, and again there’s a general push up to the surface. Why? How? I don’t know (wanna find out? Start here maybe; then here). All I know is the kunst that is produced beats much of what I see in galleries around the world ).

Oh my green crystal! Look – it’s the Fortress of Solitude!

Baikal ice is also musical. It cracks, it creaks. Maybe it’s the extra cold nights that cause it. For any other reasons you’ll have to ask Baikalogists ). Oh – and those clumps of ice – they too make a noise: always snapping, crackling and popping.

They say that when new cracks appear they make a bang like a canon. Sometimes lots of cracks and bangs occur at the same time. Sometimes you can see a crack forming – that must be quite the spectacle. 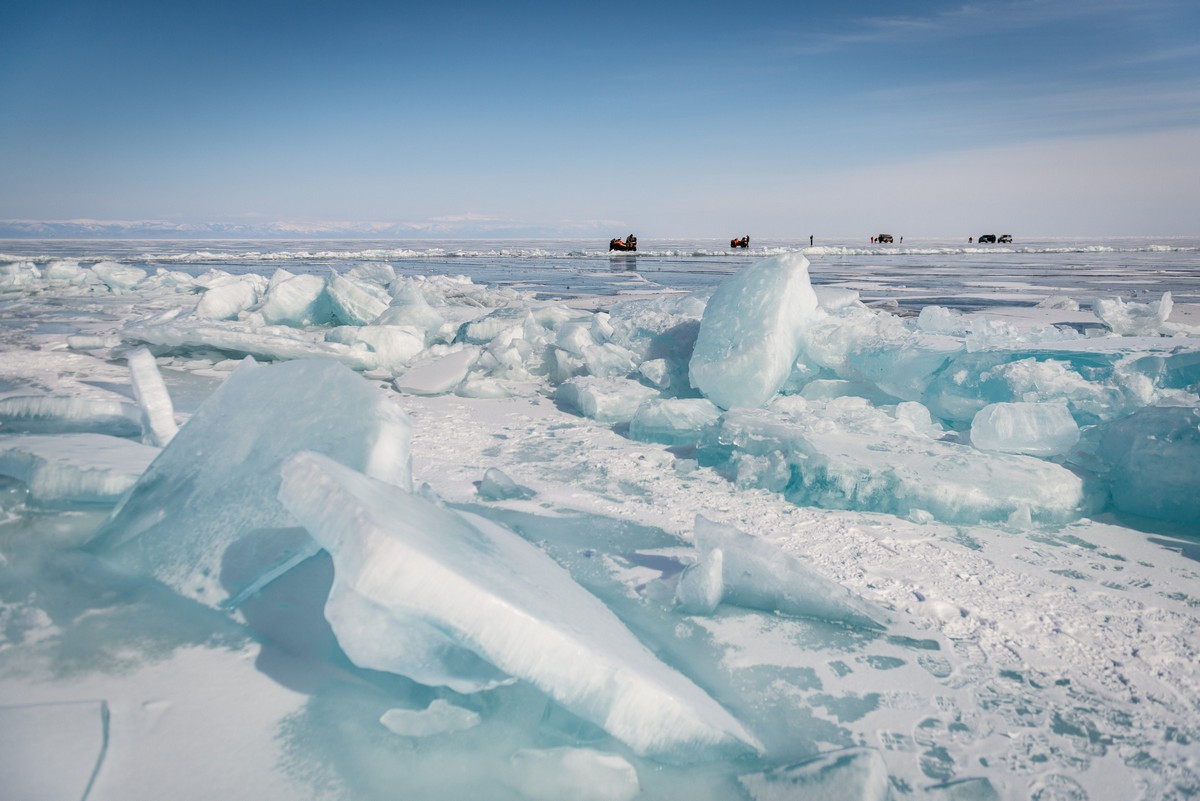 And Baikal ice isn’t limited to the surface of the lake itself; it also climbs up the cliffs along the shores:

Some folks come here and want to walk from one bank to the other. But then they’re reminded that that’s around 50km! That’s two days at a minimum – suicide without a tent and other kit needed for spending the night.

Whereas the proles use practically any old transportation for Baikal traversing: 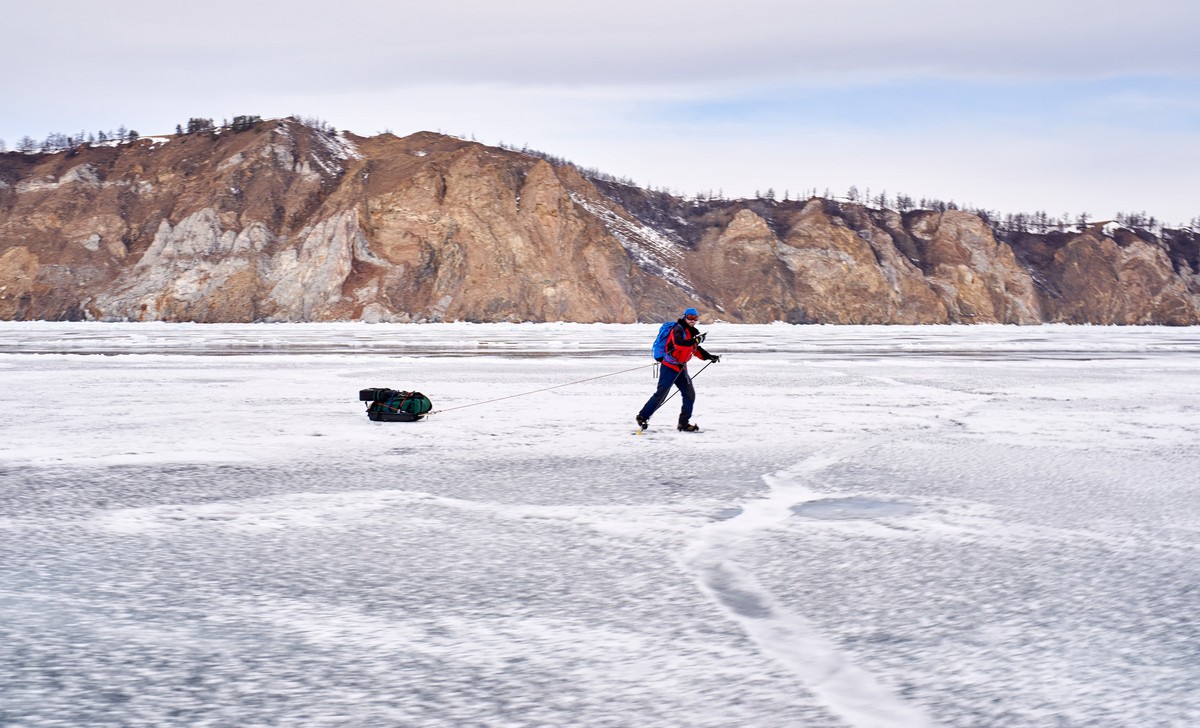 The only means of transport we didn’t see I think was dog-pulled sleighs. They are on hand, apparently, but we couldn’t use them as we were on too tight a schedule – as always.

I imagine many of you will be wondering about how safe it is to walk and drive heavy vehicles on the ice. Since it’s a meter thick, there’s little risk; however, it’s not a good idea to get close to freshly make cracks. Some of our group put this warning to the test… but none fell through the ice ).

That’s all for today folks, but I’ll be back with more tales from Lake Baikal shortly.