As you’ll know by now, I’m a big fan of walkies – be they industrial walkies, cultural walkies, extreme walkies… in fact – just about any walkies, but preferably ones involving anything must-see. And I’m of course not alone with my fandom of all things walkies – therefore they are always accompanied by lots of photos and lots of travelogue-y words. Just like in this post – on a place in Bosnia, 30km (60km by road) from Sarajevo – Tito’s bunker! 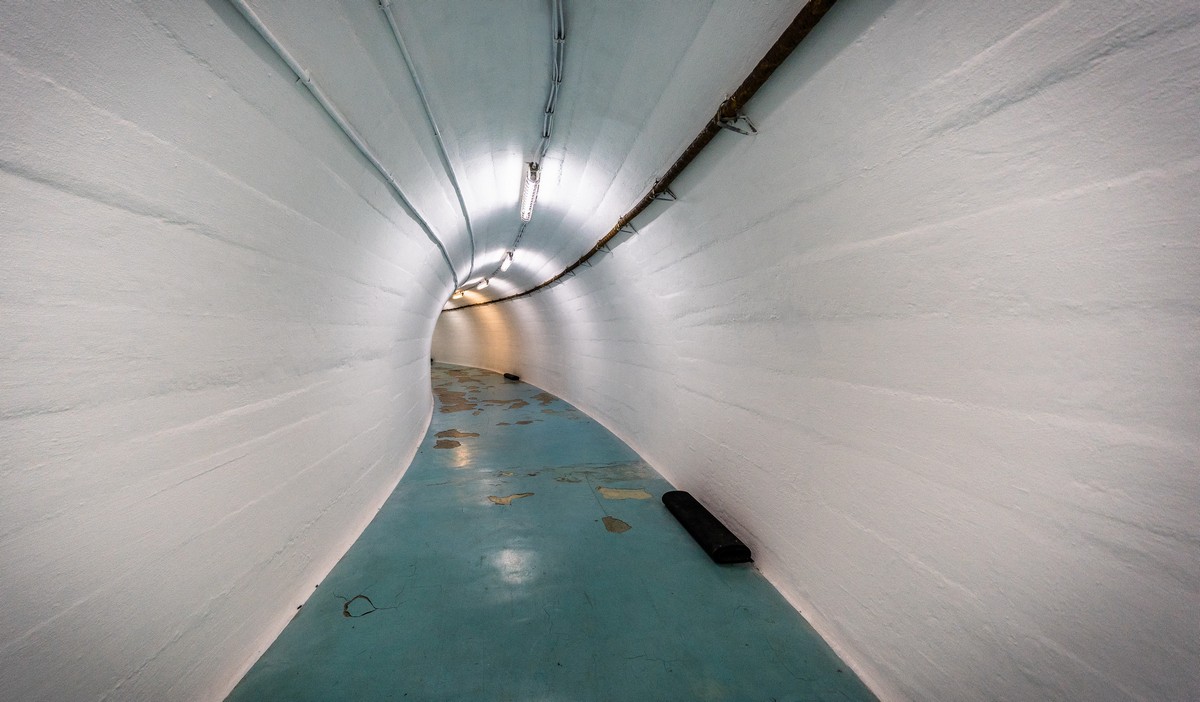 An immense installation – and totally secret for years. Shaped like a horseshoe, it lies some 200 meters (max depth – 280m) inside a mountain, has an area of almost 2000m², contains 100+ rooms, and has vast water tanks and fuel tanks. Diesel generators provided the power, there was a special air filtration system… oh, and let’s not forget about it having been designed to withstand a 20-kiloton nuclear blast. It was to be the command center of Yugoslav military operations and a shelter for Tito, his family and close associates, plus his supreme command staff (in all, more than 300 people) in the event of a nuclear war. It contained food and other supplies to last six months without anyone leaving the complex. Thankfully, its vital functions were never put to the test in a real nuclear-war scenario… 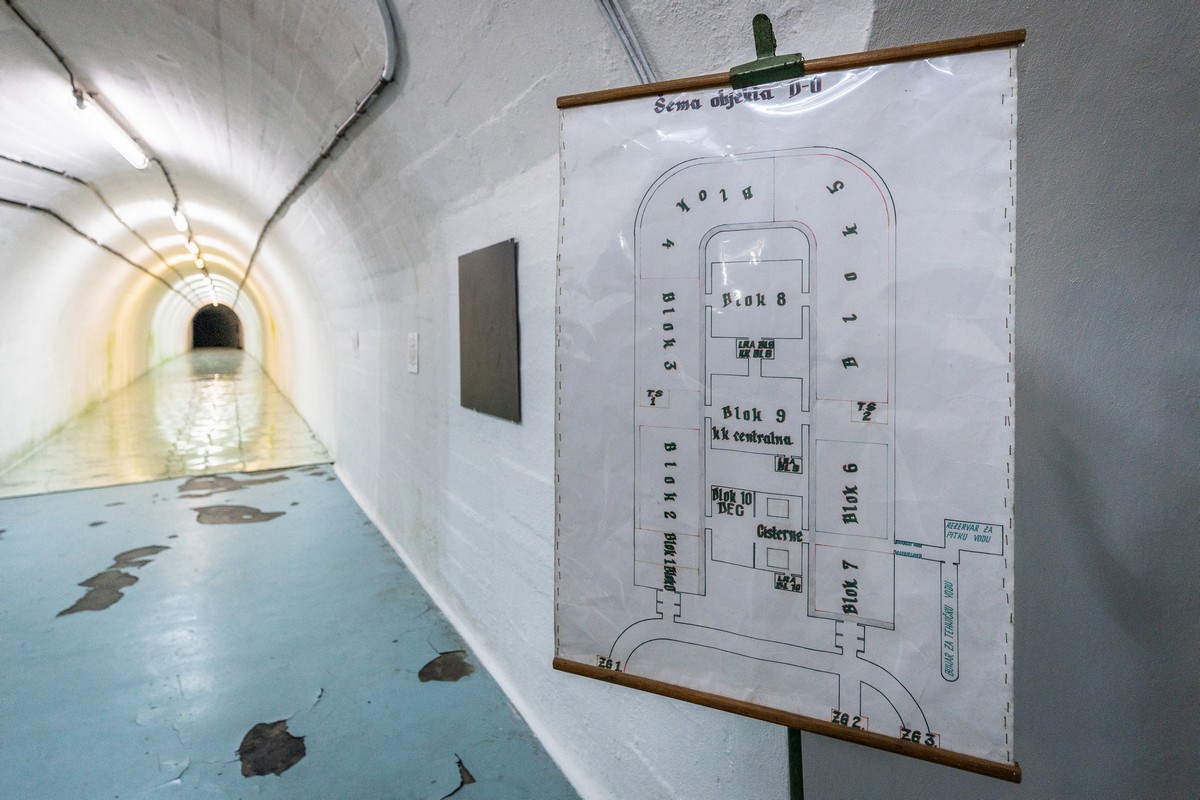 It took a full 26 (!) years (1953-1979) to build, and cost around 26 billion dollars in today’s money. Construction was shrouded in complete secrecy. All construction workers were carefully selected and security-vetted, but even then they would be brought to the complex blindfolded! (All this info, btw, was related to us by our guide, and many of the facts are backed up by various sources on the internet). All the rock drilled out of the mountain was thrown into the river below, obviously as secretly as the rest of the construction. It’s hard to imagine that such a large-scale operation was kept secret. All that rock, all the toings and froings, and making sure all the local inhabitants – and spy planes up above? – didn’t see them. Well, top marks for secrecy – it was 100%: not a soul who wasn’t meant to know about the place found out about it – for over 10 years after its completion (26+10 = 36 years!). Its existence was only revealed upon the breakup of Yugoslavia.

On the outside the entrance was concealed behind three ‘houses’. Superb camouflage. You’d walk past and never know. But let’s get inside…

Luckily for us, the approach to tourism here is sufficiently liberal. You can touch most things, snap as much as you like of it, sit in Tito’s armchair, climb up a ladder to check our the reservoir, inspect the well from which they’d pump water therefor, and so on…

The corridors can appear endless. On the walls are what’s been left over from a recent kunst exhibition (they take place regularly here). I won’t comment on said kunst’s quality; I’ll leave that to the experts. 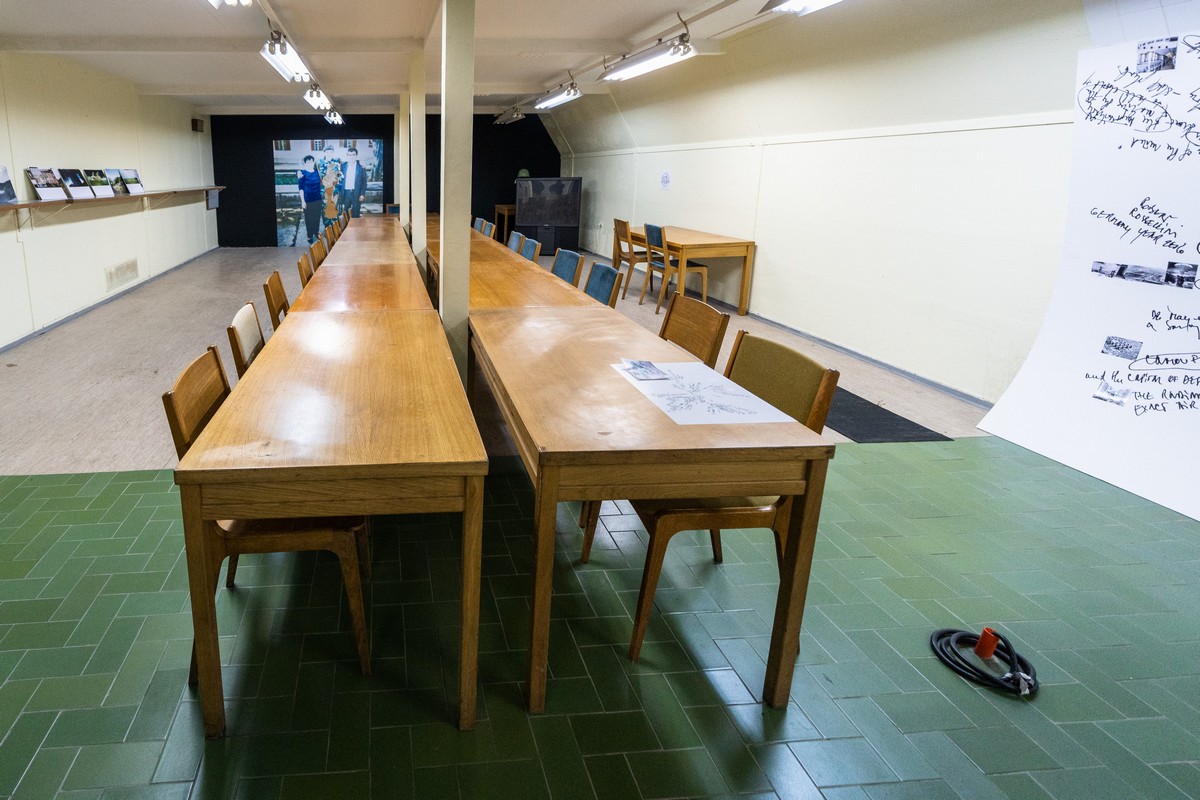 Tunnel to the wells: 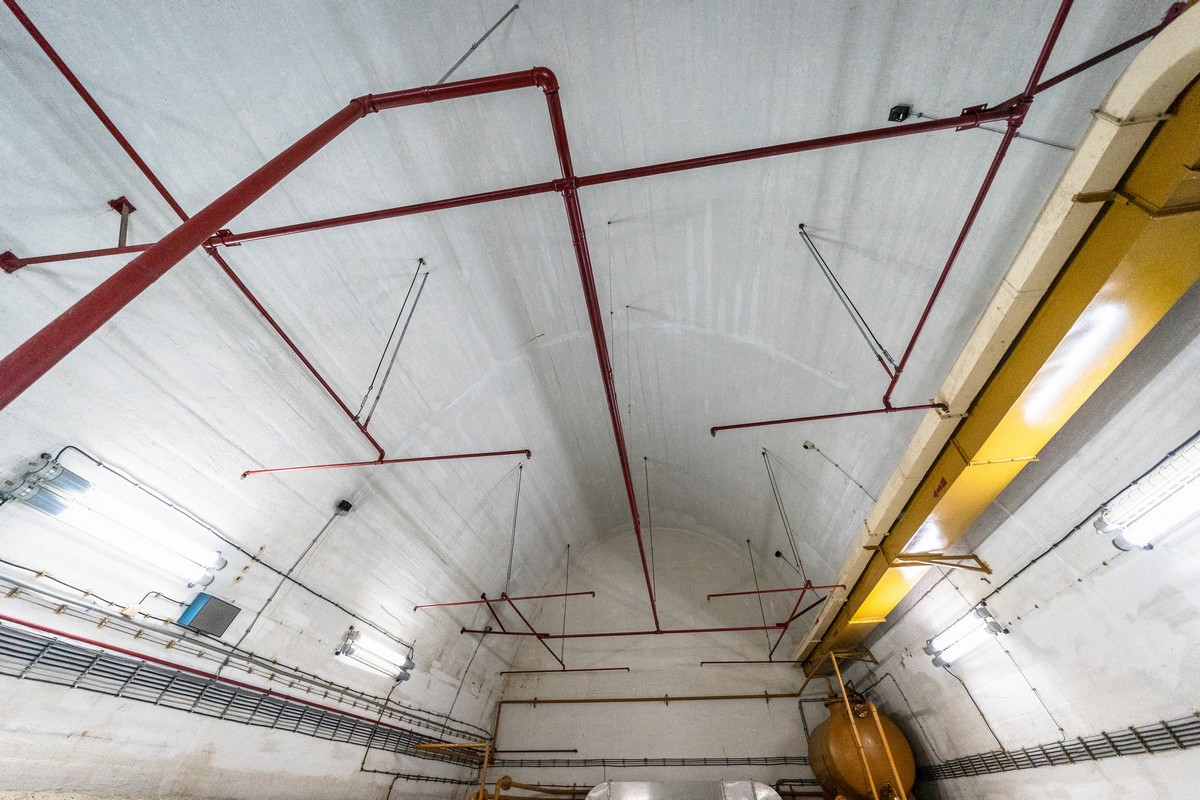 Diesel generators. Btw, a lot of the heavy duty kit here was taken from ships or submarines. And some of the windows I saw (internal ones, of course; this is a bunker, remember:) resembled military airplane windows. Makes sense, I guess. Orders for brand new kit might have been less easy to conceal from nosy parkers – no matter how centralized the economy.

But this telephone station and switchboard look brand new, albeit old-school: 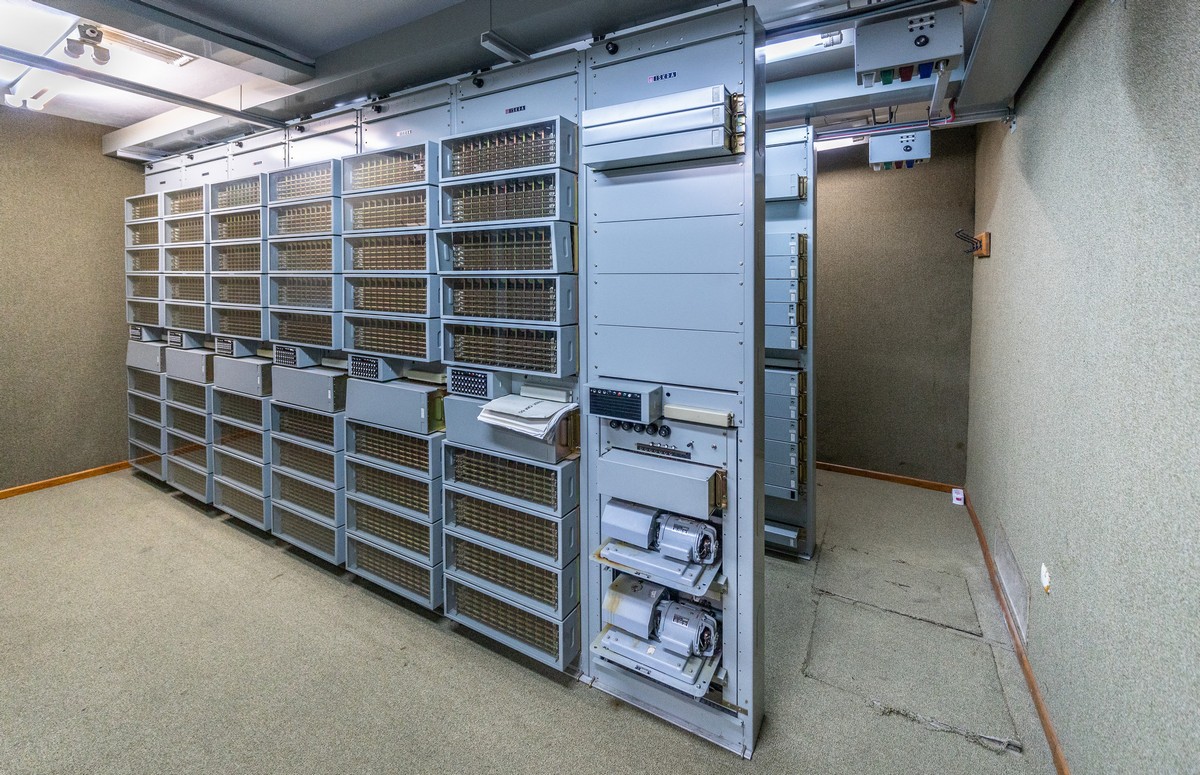 And here’s a map of the communications with other bunkers in the former Yugoslavia. Yep, there were quite a few; but this was the biggest, most important (presidential), and most secret: 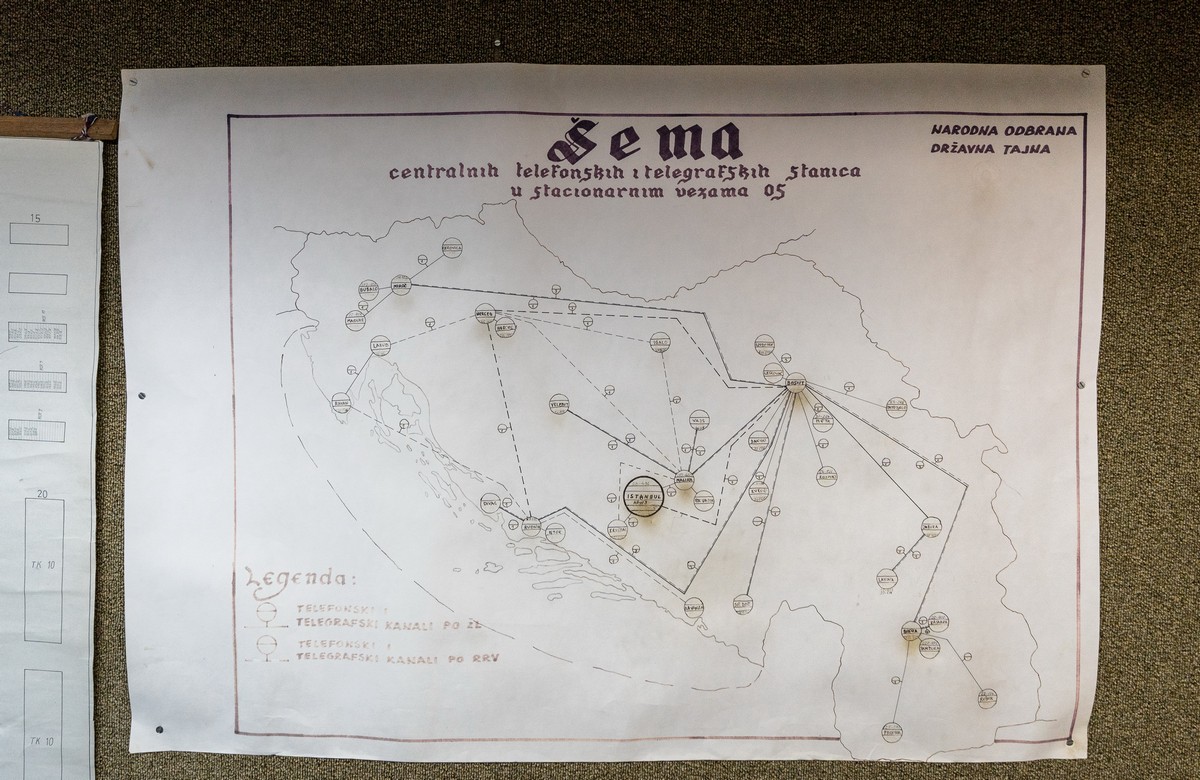 Teleprinters – one of the few types of devices in the bunker not of Yugoslav origin:

Emergency exit up to the surface. Behind that door there – steps up 200+ meters to the forest on the slopes of the mountain. + Silly graffiti:

I have to say: these rooms, this kit – would make a great setting for a 70s spy movie:

Oh my grandmaster! I’d never seen one of these! It must have been specially adapted for the place given the prospect of six months sealed inside the bunker with little to do besides sit and wait for radiation to subside…

Photos of different bunkers and bunker-like objects. Tortoises. Yep – they’re still pursuing me around the world ). No really – there is a real tortoise in among these pics:

Yet more remnants left over from the recent exhibition. If you stand in a certain place, these here bullets turn into… 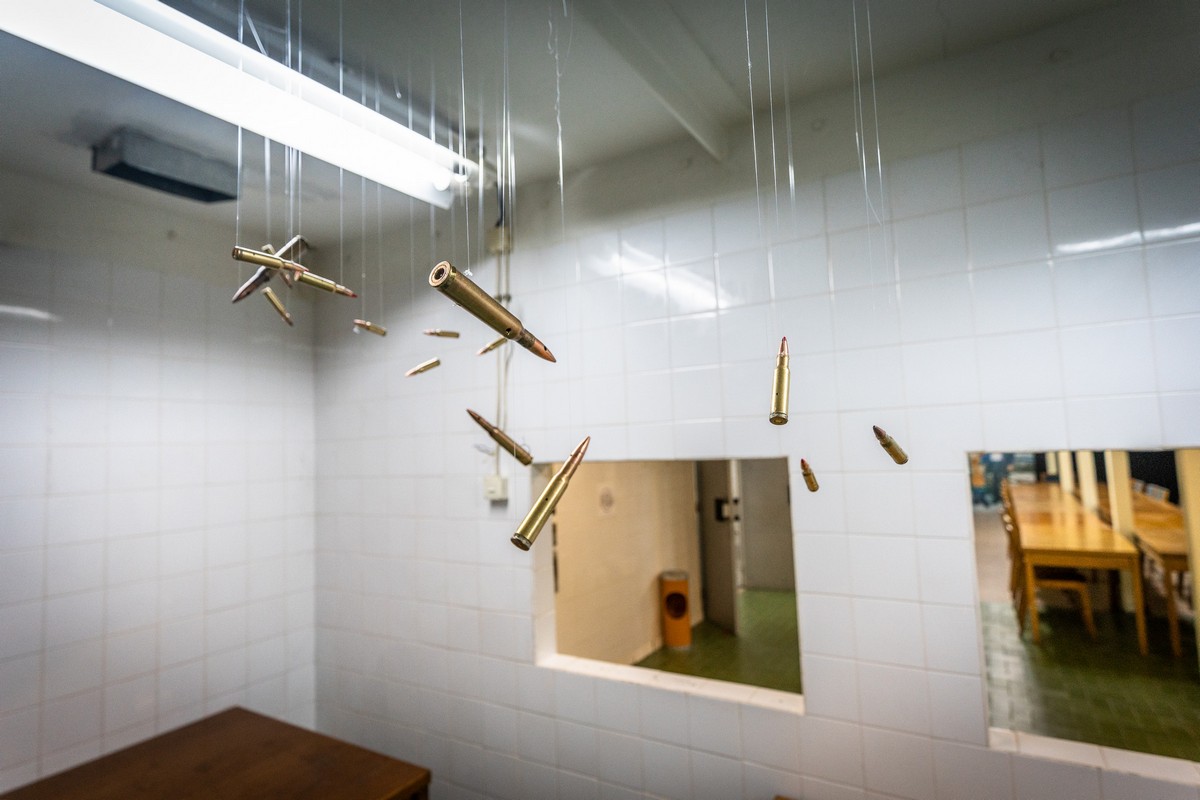 Is it a star? Is it a pentagram? I’ll leave that to you to decide. 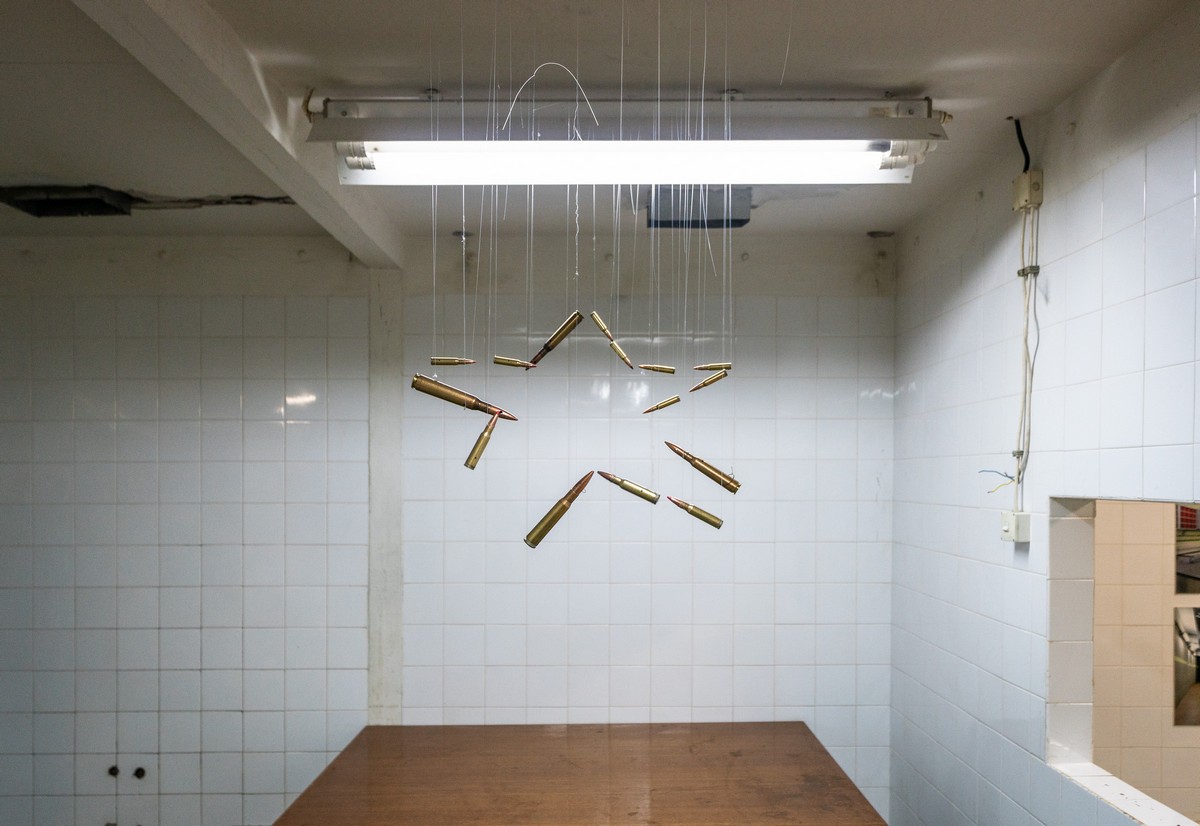 Now, I rather like modern art. But this? We weren’t sure if it was the art installation or just some garbage left over in the bunker put into one pile. We were informed it was in fact an art installation. Right. Silly us. What is symbolized is anybody’s guess (we could have done with an expert). I wonder, if the artist responsible were to be here and move all that trash from one side of the room to the other all day – would that equal an art ‘performance’ of the avant garde? ). 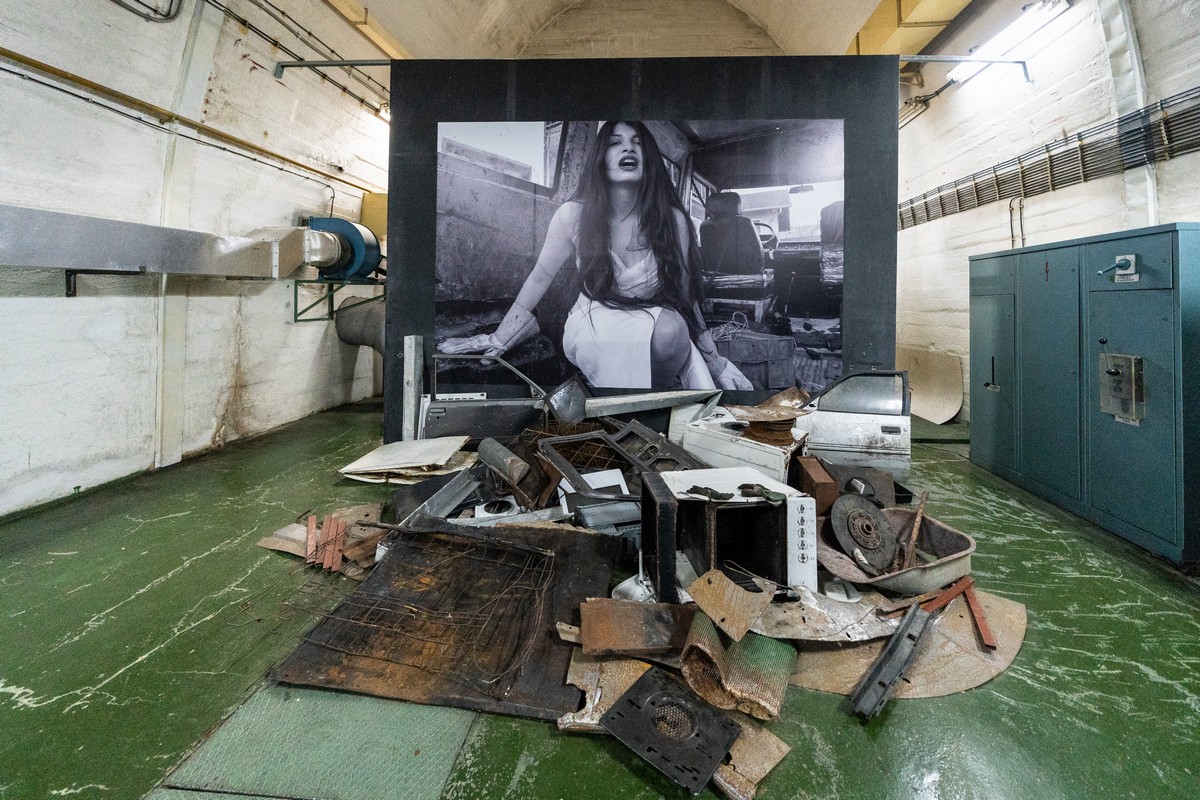 Other exhibits were rather charming:

What could have been:

And that, ladies and gents, brings my Notes from the Underground to a close. What an excursion! Blofeld – eat your heart out!

This, btw, is the view from the camouflaged ‘house’ at the entrance (the inside of which has fallen into ruin): 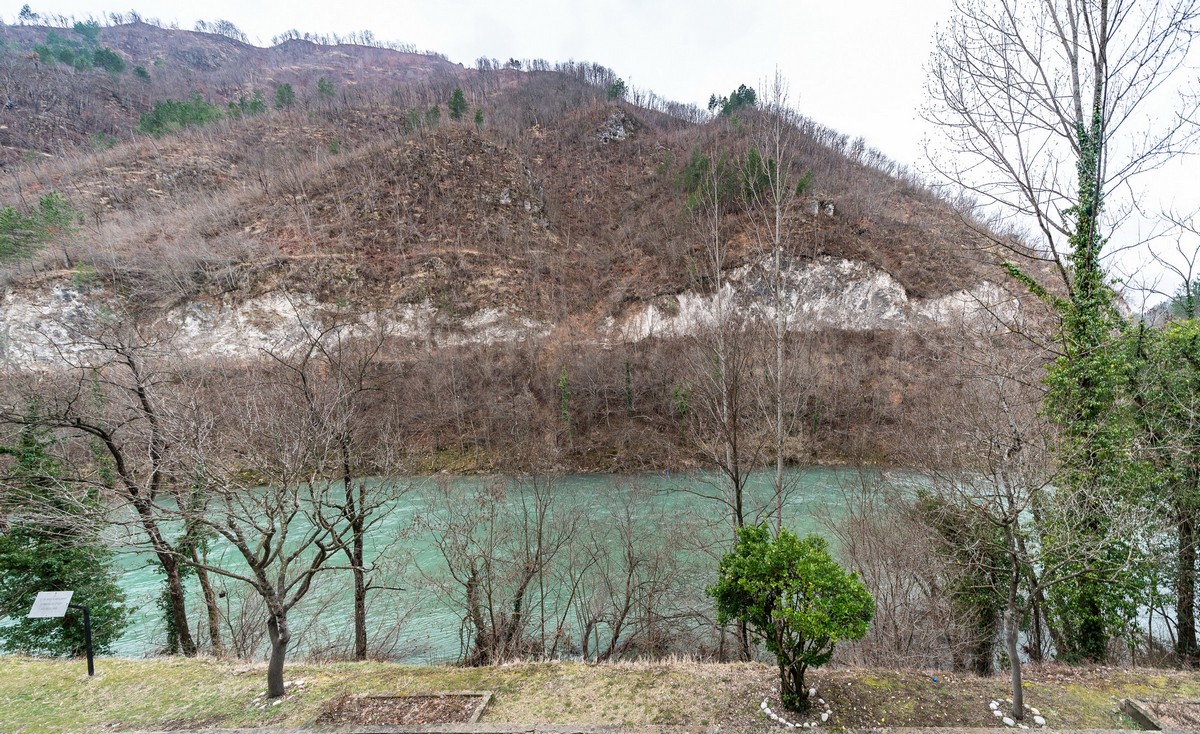 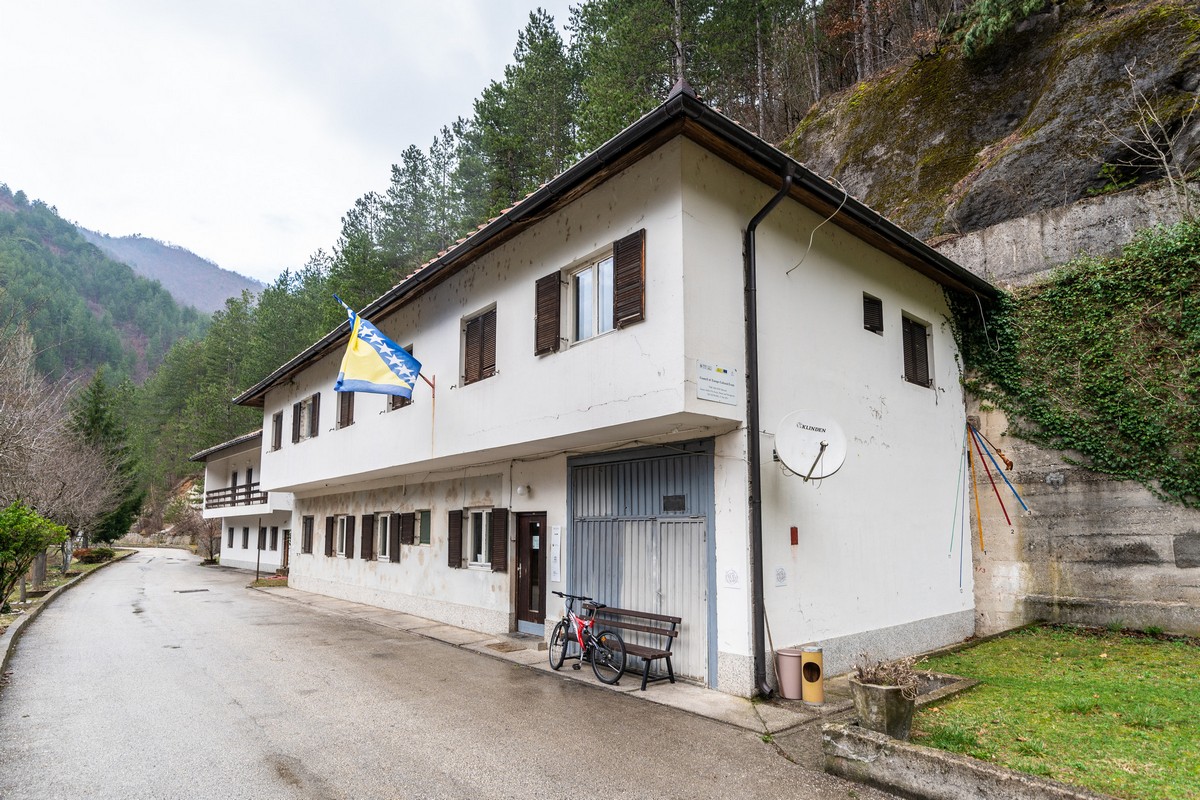 And here it is from across the river: 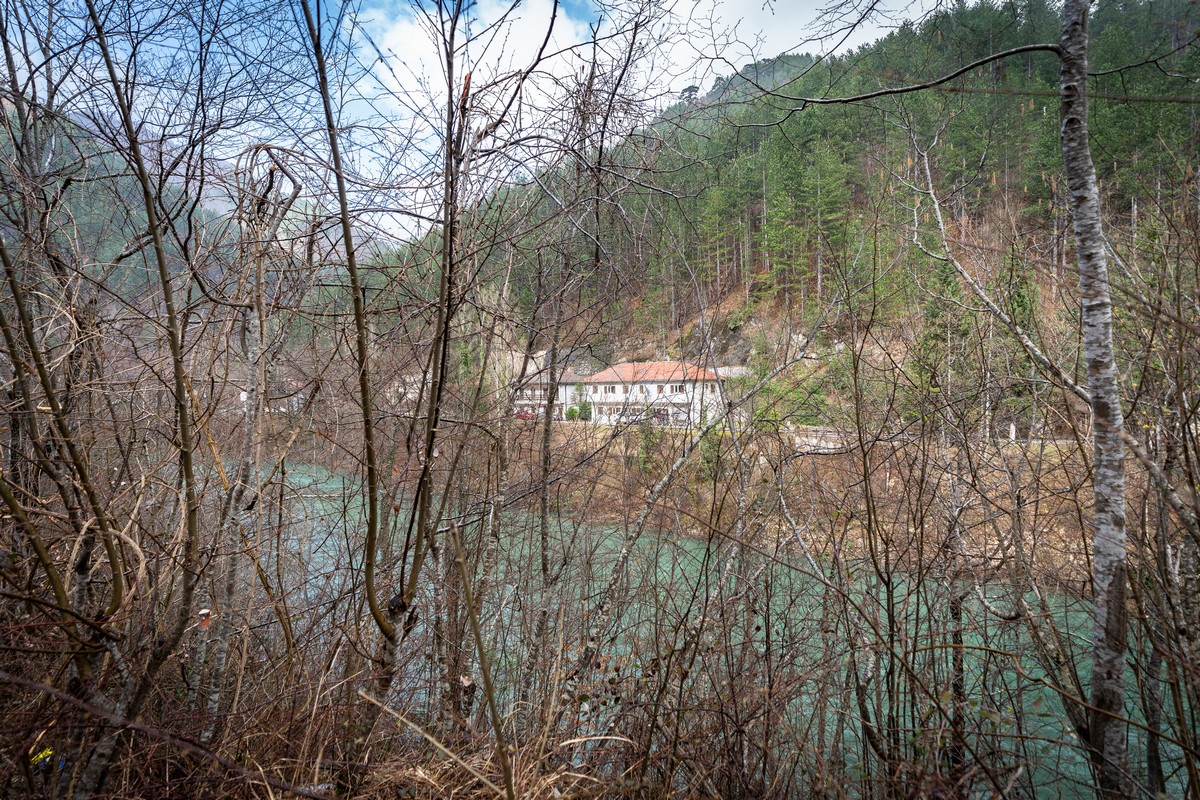 Oh – and Bosnia and Herzegovina is a +1 to my list of visited countries!

All the pics from Tito’s bunker are here (in the original hi-res).