I tend to travel a lot: all around the world (including its more exotic locations), often, and mostly at a fast pace. I’m very lucky in that respect as I love traveling (surprisingly, not everyone does after doing it years!). I’ve been to most of the must-sees of this world, and taken plenty of pics while doing so and uploaded them to this here blog for well over a decade already. That includes both the North and South Poles, the Himalayas, the Sahara, Greenland, and a great many volcanoes. However, it turns out that some places not all that far away from home for some odd reason haven’t ever been investigated by Yours Truly. Indeed, I keep a short list of these special-yet-unvisited destinations with the hope of whittling it down to – hopefully – nothing sooner or later. Well, said list has just been shortened by one place: for I’ve finally, after so many years wanting to get there, been to… Florence!

Yep, though I’d been to Italy sooooo many times before, I never made it here! I’d been to Rome a zillion times since our first office was opened there (in 2008); also Milan, Naples, Venice, Bologna, Maranello, Syracuse and even Palermo. In short – everywhere but Florence! Well, I had briefly stopped at Florence on a train en route to somewhere else, I’d driven around part of its outer ring road, and I’d flown over it plenty of times, but never visited it properly. Until now…

So what can I say? I’ll say Florence is a magical city. Briefly, here’s why:

Florence, once the great and powerful Republic of Florence, in Tuscany. It was from here that the Medici political dynasty hailed, where manufacturing once boomed to combine with trade and finance to make it one of the most prosperous cities in medieval Europe.

And I can believe it. Such grandiose buildings; such artists and sculptors like Michelangelo and Leonardo… their creativity was surely facilitated by the fact that the region was economically well advanced. But you can read all about that on other websites; here – as always – mostly photos! And emotions…

The Palazzo Medici! Btw, just opposite the main entrance is the original David by Michelangelo! Oops – not quite. It’s a replica. Still, the original isn’t far away at all – it’s in the city’s Academy of Fine Arts.

But the main thing about this Palazzo – apart from the architecture (made plain on purpose, but, still, well, look at it!?!) and the art – is how it was from this palace in particular, and from this city in general, that Europe was maneuvered through the Middle-Ages on toward a brighter future. I won’t give a history lesson here, but for a fascinating read, check out these pages on the Middle Ages, the Renaissance and the Age of Enlightenment.

So, where were we? The origin of the Renaissance.

Where were we? The Republic of Florence.

Who are we? Tourists with cameras.

Why are we here? Why not?! When in Rome Italy… 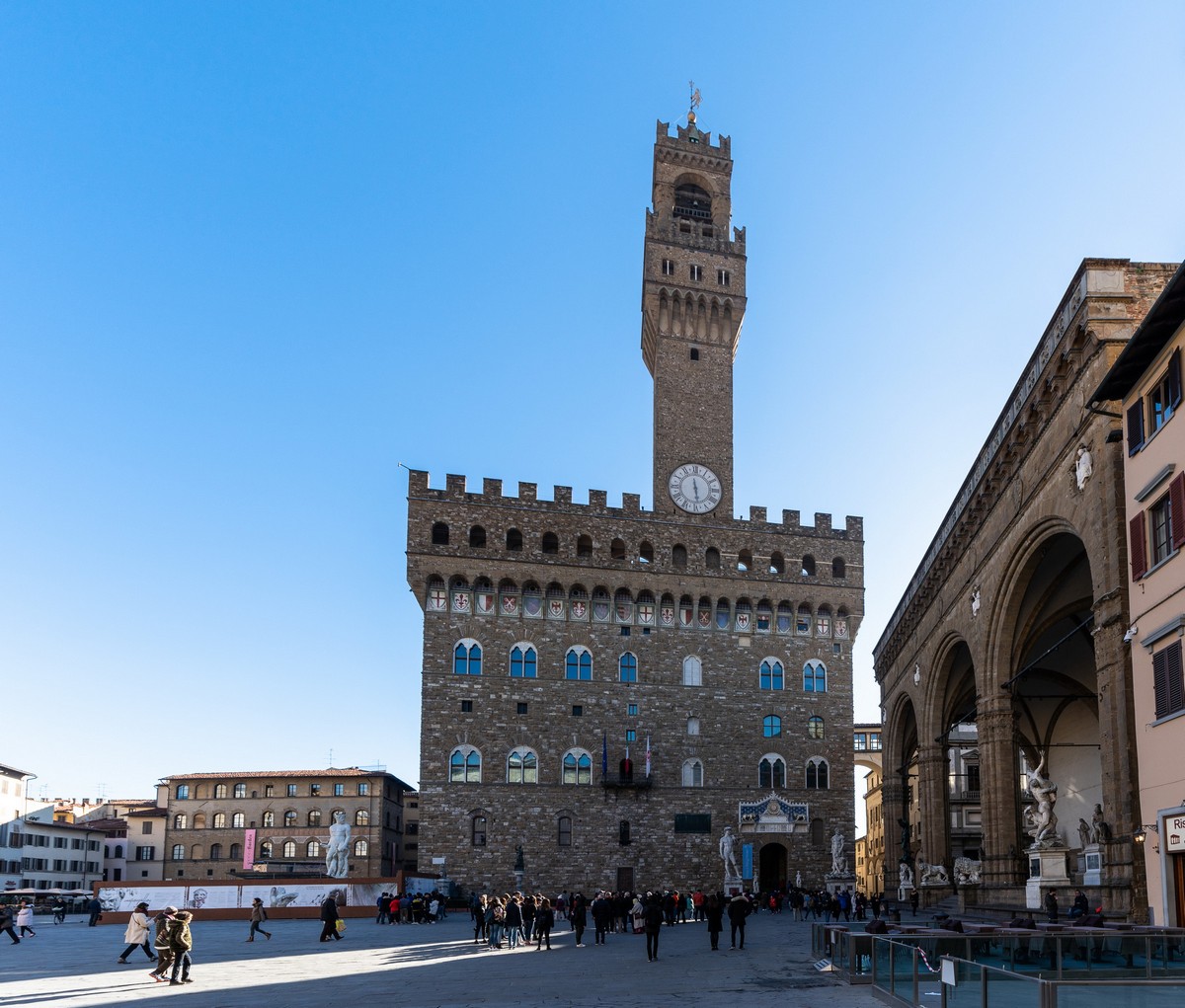 This… isn’t the main hall of the palace, or the banquet hall or some such. It’s the entrance hallway ). 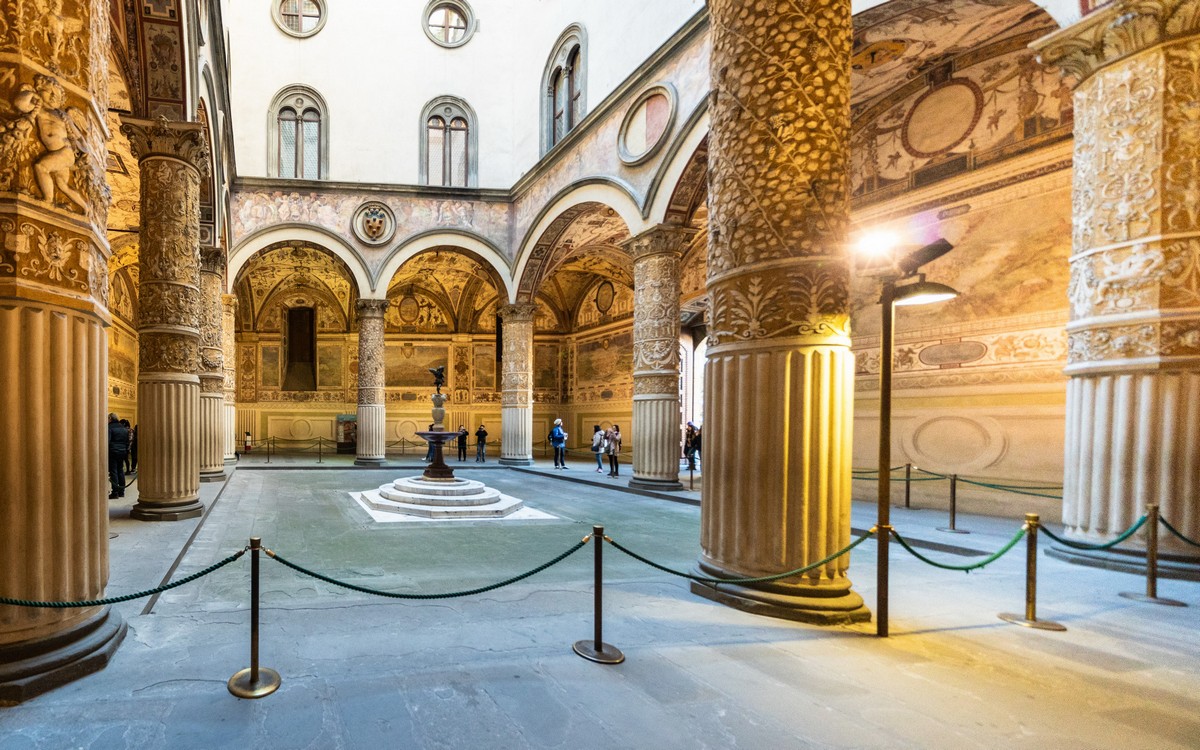 The hallway, btw, is to a different palace – the Palazzo Vecchio.

This palace was built in the 14th century; that is, some 700 years ago! It’s been renovated and extended over the years, but still – the main structure: nearly as old as Moscow!

The main hall. Paintings, frescoes. My camera was as stunned as I was; that’s why the pics have turned out a bit wonky…

All the art in here appears to depict killing – on the battlefield or one-on-one. But I noticed hardly any blood in portrayals, much less guts hanging out or limbs chopped off. Was this in the interests of ‘civilized’ decency I wonder?

At least the ceiling art was a bit less grisly and blood-soaked:

Just how did they manage to paint all that on their backs with the paint no doubt always dripping on their faces? Not sure how, but they did, and just look at the result.

The Florentine/Italian masters of old – quite incredible the scale, intricacy and grandiosity they pulled off. Imagine artists spending lifetimes these days painting a single palace?!

The palace is enormous. You take a room at a time, accompanied by a guide. After a few halls we came to the map room:

The maps are all so detailed – and of practically all the regions of the world – including Namibia (!), China, Ecuador and Peru! All (obviously) hand-drawn so many years ago. I reckon back then they’d have been priceless. Frightening to think what they’d cost today!

Here are the country maps (sorry for the reflections – but I could hardly draw the curtains:). Can you find your country ?

And here’s Karelia – where I was a few days earlier up to my waist in snow. 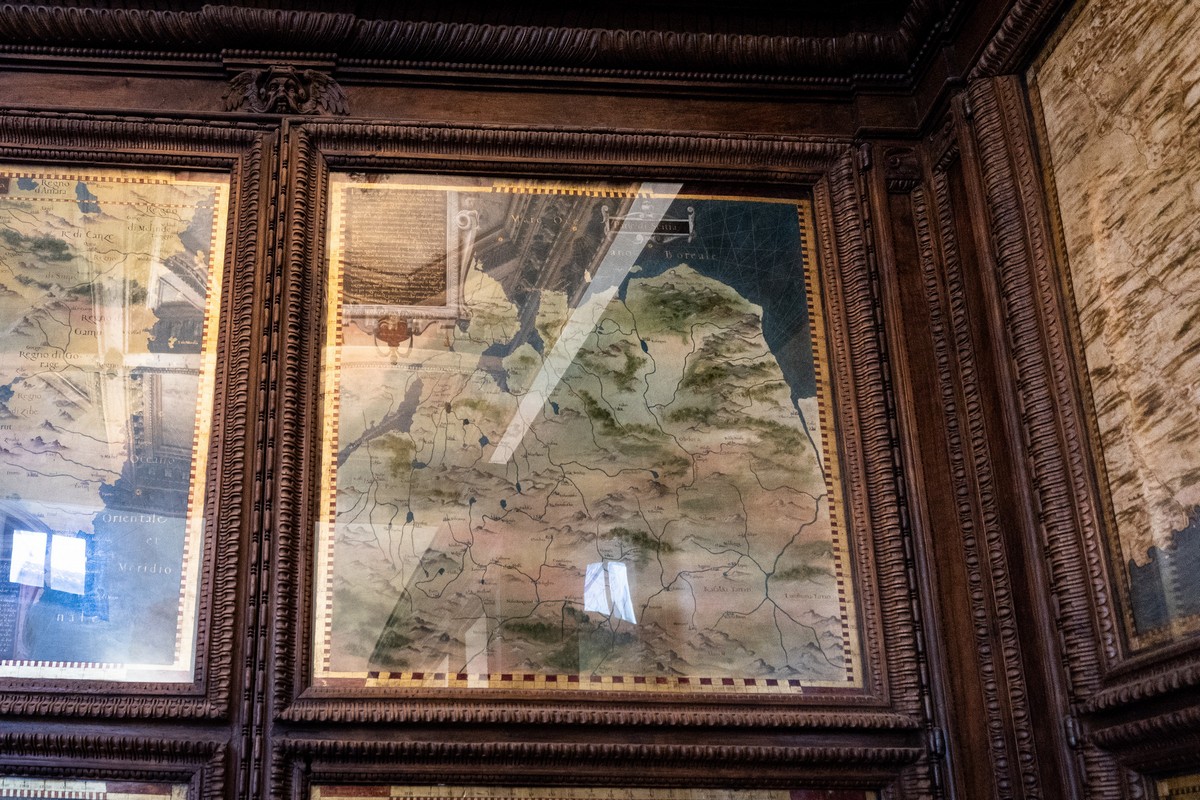 Maps, more maps, still more maps… then suddenly, in a corner… a concealed keyhole to a secret door!…

Through the door we go… 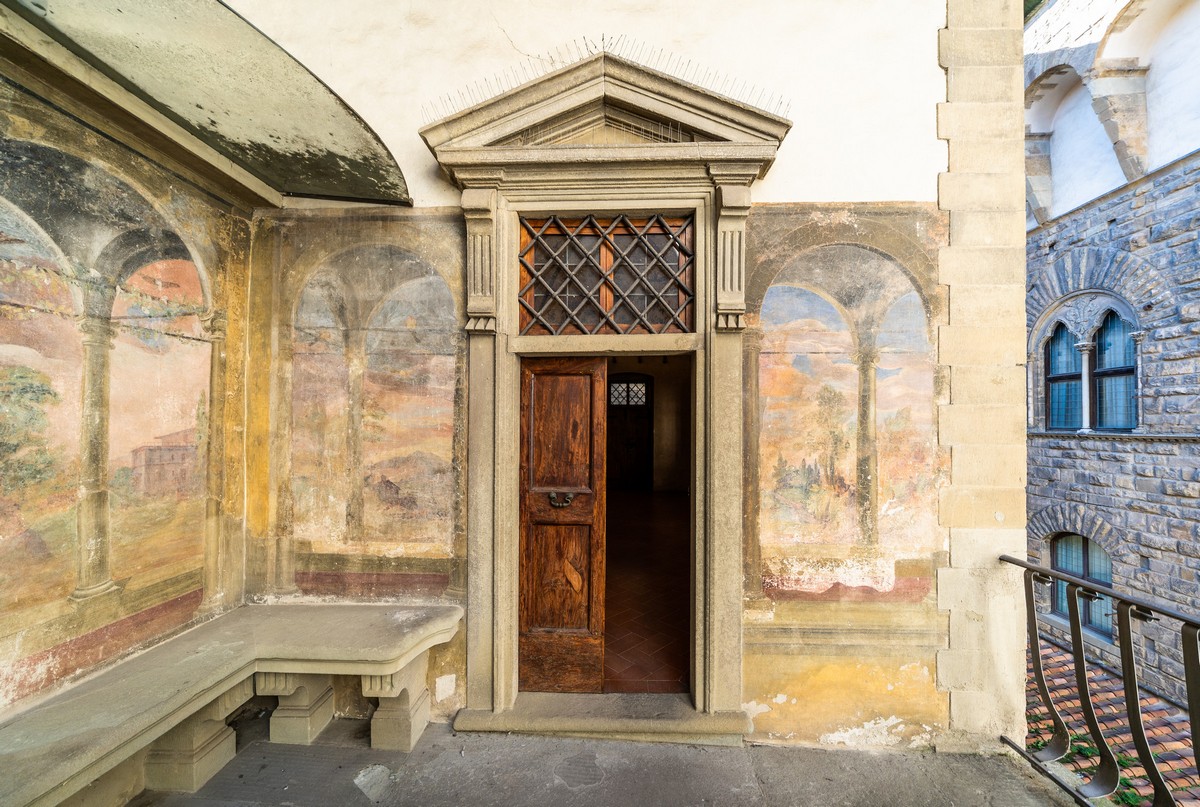 And into a small room… 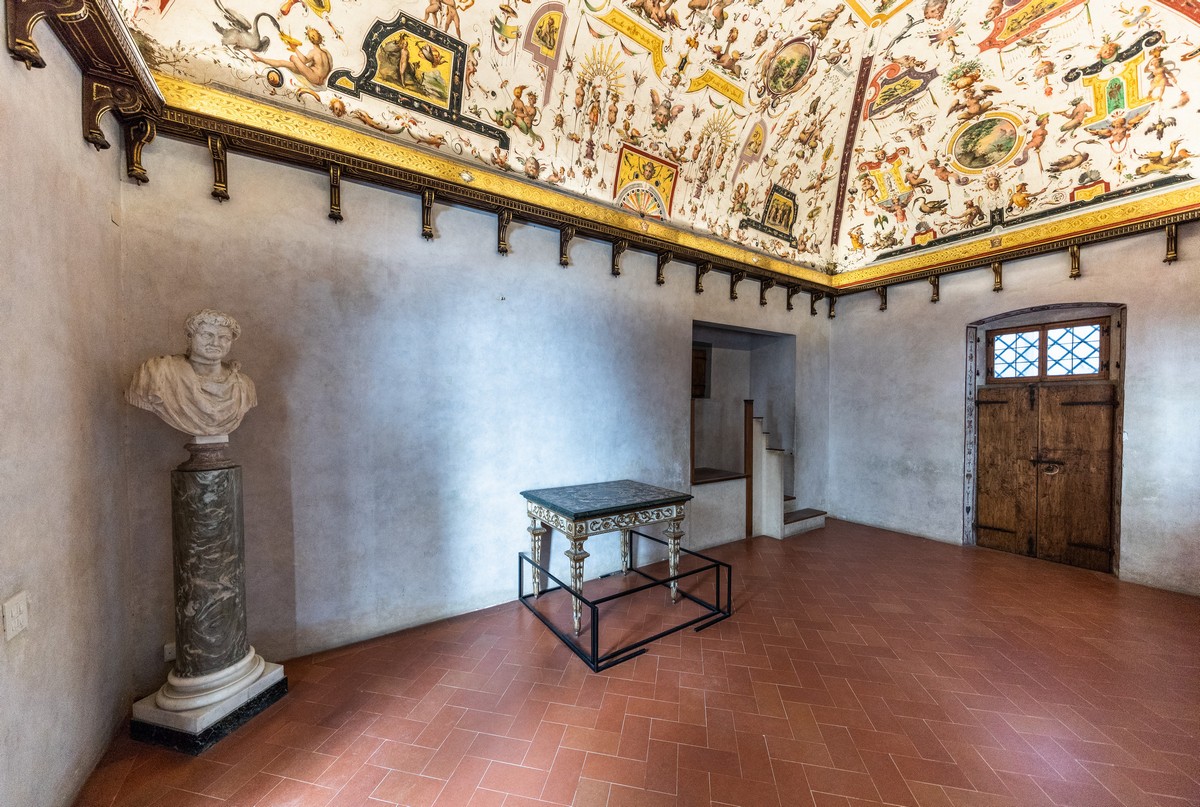 It turns out that this was secret snooping room! A hatch on one of the walls when opened revealed the back of some cornice work up at the top of a wall of the main hall, below. This was used a secret listening device. They seem to have designed the whole building with this in mind: the acoustics were crystal clear – you could hear a pin drop down in the hall. Oh those Medici ).

Here’s the other side of the hatch – the concealed cornice:

Next up for us – up onto the roof of the palazzo. Here’s the view therefrom:

Up we climb further – up steps up the tower…

We come to a small modest room. It turns out this is where Savonarola spend his last days before being executed. Well, I’d heard the name, but I never really knew who Savonarola was. Visiting this macabre chamber made me want to look it up on the net, which I did. What I still don’t know is how history views him today – generally a force for good or bad? Probably depends whom you ask, or rather – on the religious views of whom you ask, perhaps. One of Girolamo’s most famous detractors was (Florentine) Machiavelli – as stated in The Prince itself even; not that that really helps us. But I digress… 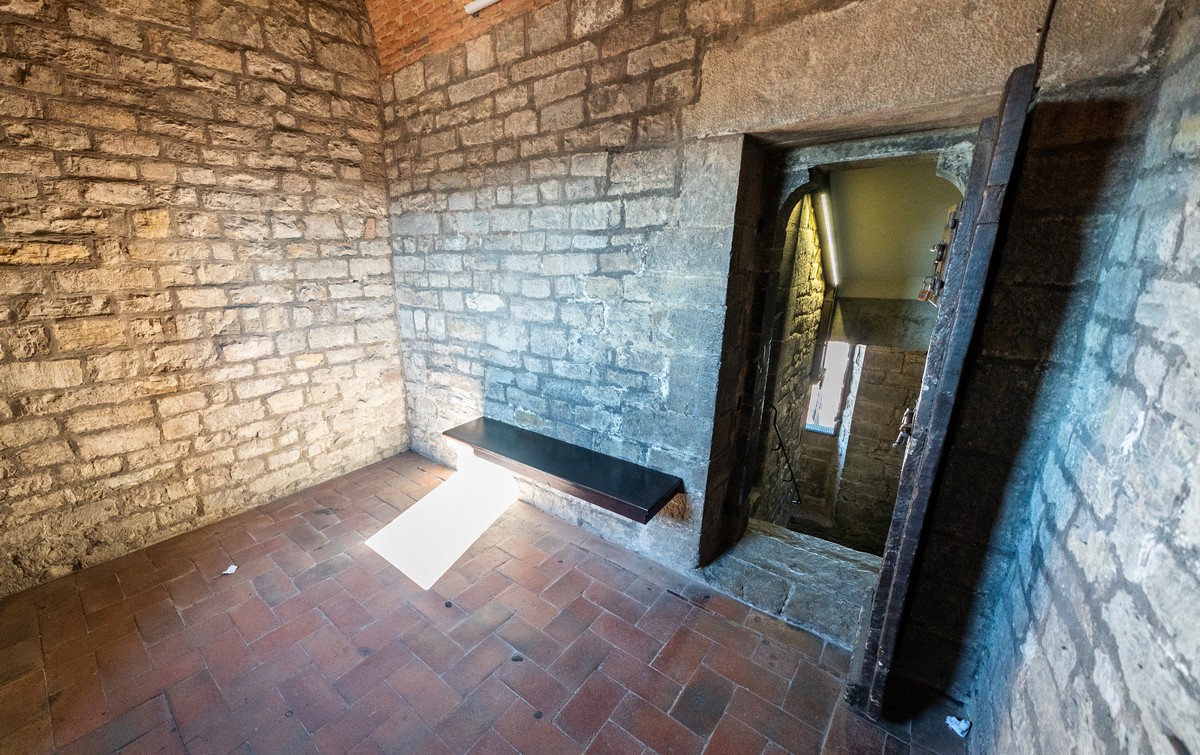 Here we are at the top. Well, almost. There are another five meters to go but those aren’t accessible to tourists. Still, here was plenty high enough. Check the view!

Next up – another oh my grandiosa: Uffizi Gallery. Its management (we were here not only as tourists but also on cybersecurity business) told us how it’s the world’s oldest public museum! The building’s construction began in 1560 and completed in 1581! At first it was open to visitors by request in the 16th century; then, in 1765, it was opened to the public. Wow. That is old. 200 years older than me!

Our guides told us how the British Museum is, strictly speaking, older – having been founded in 1753 (so, 12 years older). However, one really can not describe that ‘private collection in London’ as a museum any earlier than the 19th century. Therefore, as our Italian guides proudly informed us, the oldest museum in the world is in fact this one – in Florence. So there! 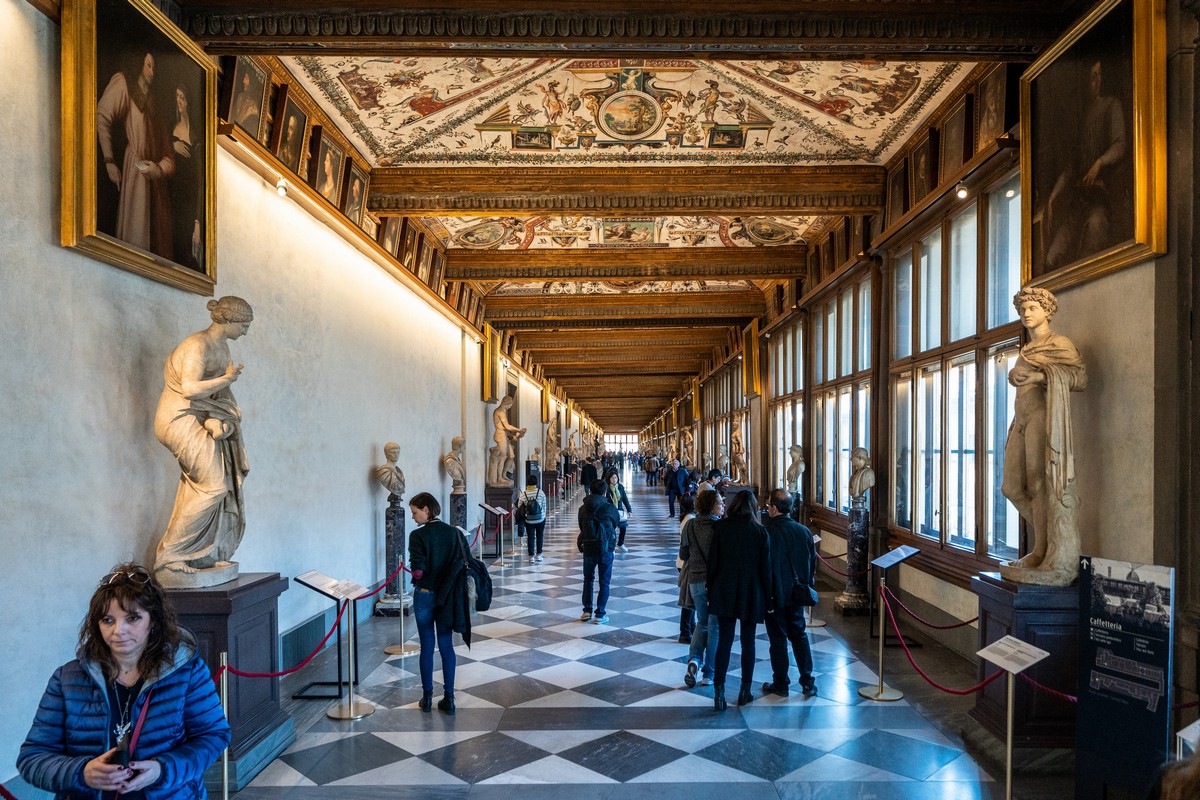 First up, long corridors with sculptures and paintings. Btw, there are around 3000 (three thousand!) sculptures in the museum! But the main masterpieces are in the halls. Here we go!…

Botticelli, Michelangelo, da Vinci and Caravaggio – and all originals! Oh my gobsmacked!

Botticelli’s Primavera – heard of it? Well here it is. 1482. Mysterious meanings all over it. Excursion explanation time spent on just it: 30 minutes ). 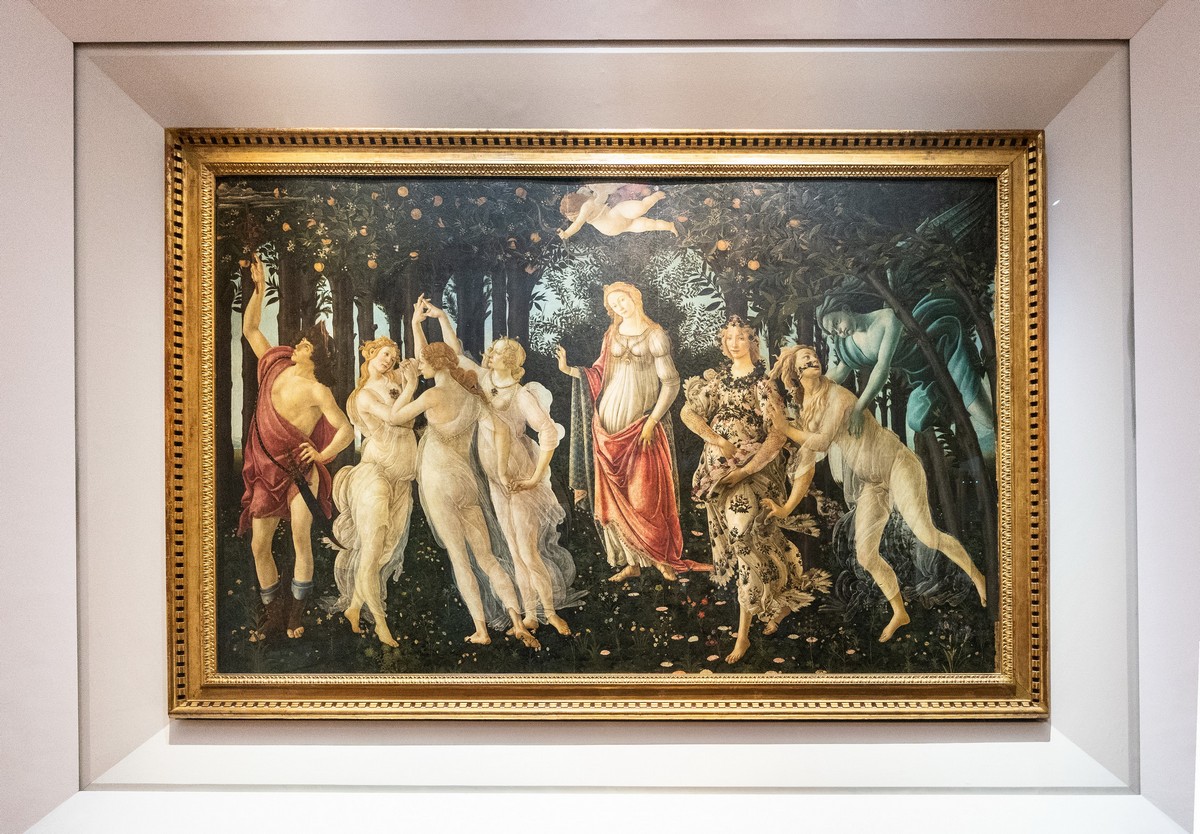 Woah! The Birth of Venus! I finally get to see it in the flesh. It was my travel companion ML’s first look too.

Apparently this was more of a joint effort than just da Vinci’s work. Michelangelo also had a hand in it, as did Raphael. Crowdsourcing a la 15th century!

Around about here my head started to spin. Florentine cultural overdose, for sure ).

All the paintings have a thin and almost invisible sheet of glass a centimeter in front of them. With so many priceless pieces – makes sense…

I think I wrote above that these are all originals. Turns out I’m wrong! The original Laocoön and His Sons, for example, is in the Vatican. This is a copy.

Caravaggio’s Bacchus. Apparently there’s a tiny self-portrait reflection of the painter on the glass of wine. I looked and looked, but… nope – I couldn’t make out anything but the deep red of the wine ).

Btw, that reflection in the wine glass was only noticed rather recently, after all the works were put behind the glass. Only then were folks allowed to get up close and personal to the paintings – and that’s when someone saw it for the first time! Good on the innovational director, I say. And apparently such correct tech investment continues today: improvements, new technologies, internet, and so on and so forth. 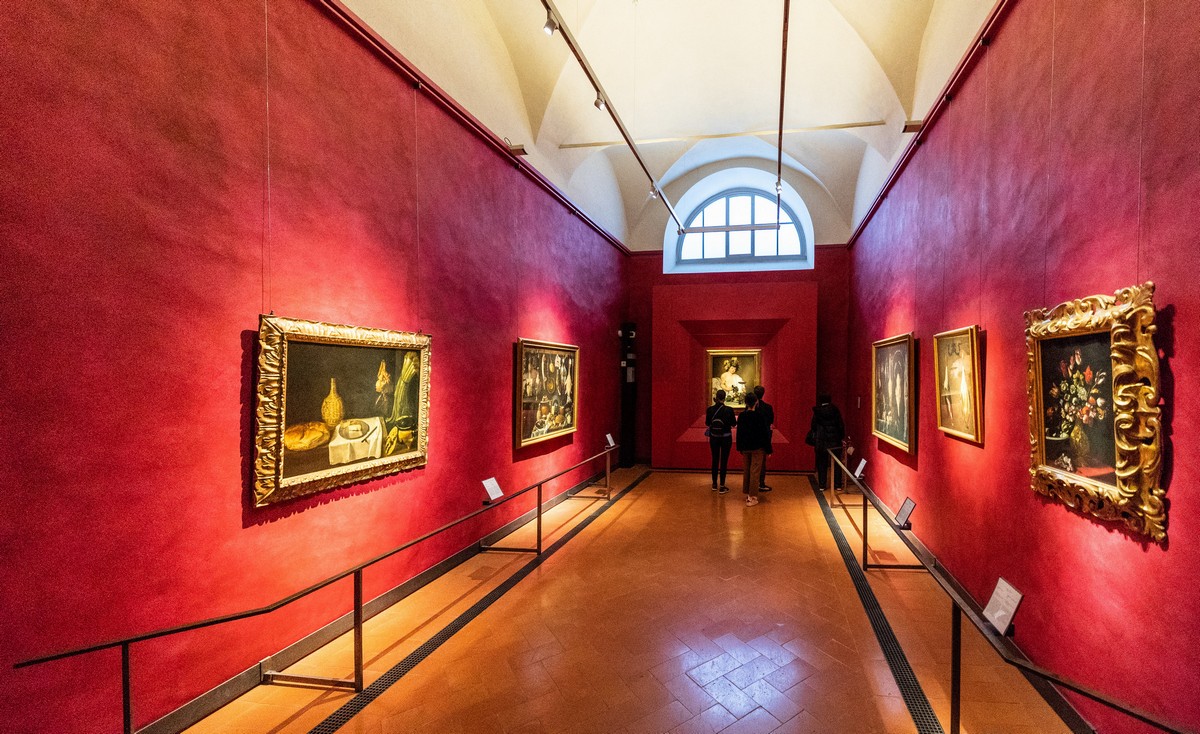 So yes. As you can see, this place is just unbelievably cool. Still reeling from the cultural overdose, after leaving the building the first thing we did was… grab a beer! We needed to rein in the emotions, calm the mind, take the edges off the come-down after such a euphoric ‘trip’! We’re just not used to such extreme visual sensations!

Btw, February – when we were at the museum – is a great time to come here. I’d hate to think what it’s like here in high season: too many tourists and temperatures too high. No way. But in Feb – even the city’s famed Ponte Vecchio (‘Old Bridge’) is mostly unpeopled: great! The bridge has always had shops all along it – right up to today. I wondered why. Then I realized: in the past it was a tax avoidance scheme! On/over the water – local tax laws didn’t apply! These days, btw, the shops mostly sell jewelry and fancy watches.

The view from my hotel room – with the bridge visible:

And that, folks, was Florence; for me – finally!

All the photos from Florence are here.